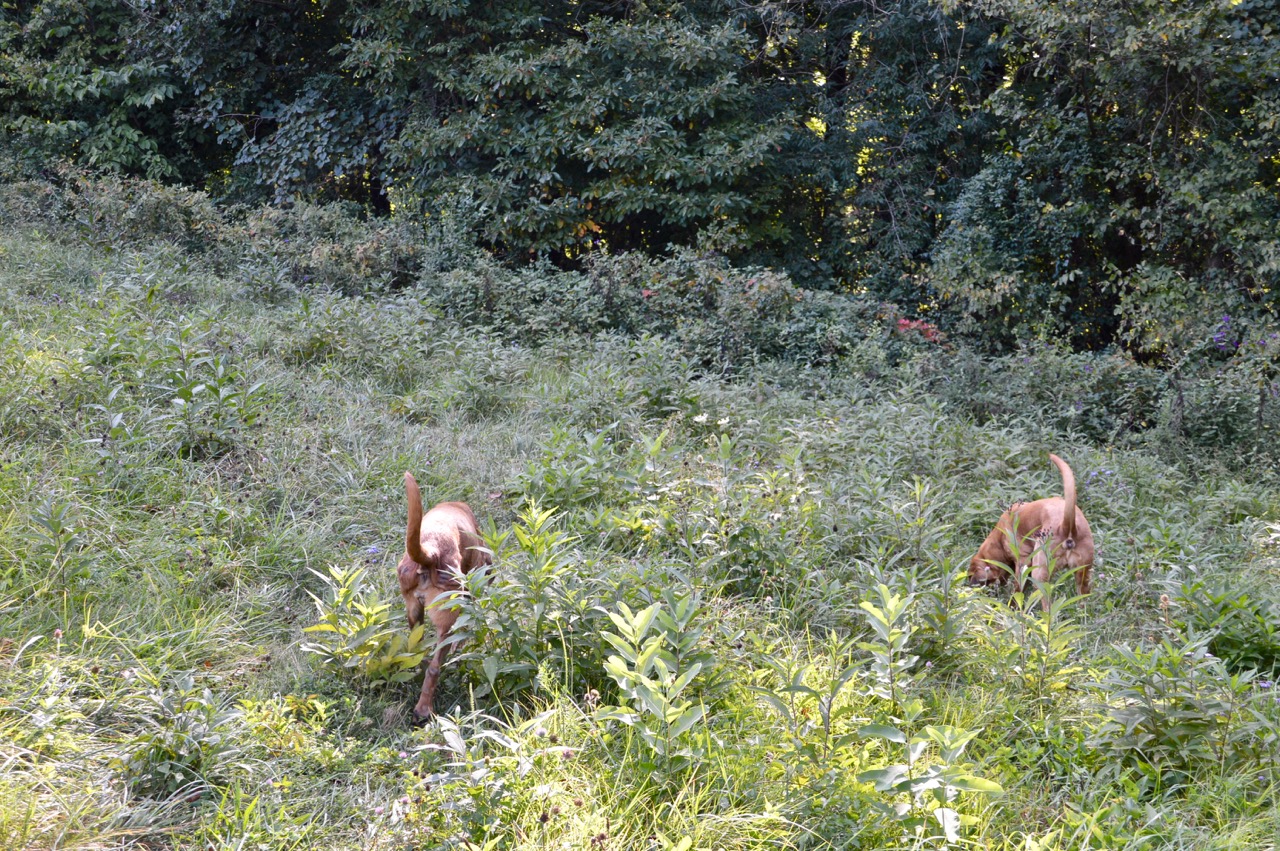 Today will be the first full day and night of 2017 college football, starting at noon. I'll be watching football all day and through the late night hours. Last night after midnight I bought gas for the FJ and then headed to Walmart for a weeks worth of groceries. So I am set, yet I don't have a lot of 'snack' food for the games. Times have changed a LOT from a few years ago on Saturdays, which were full fledged overeating. 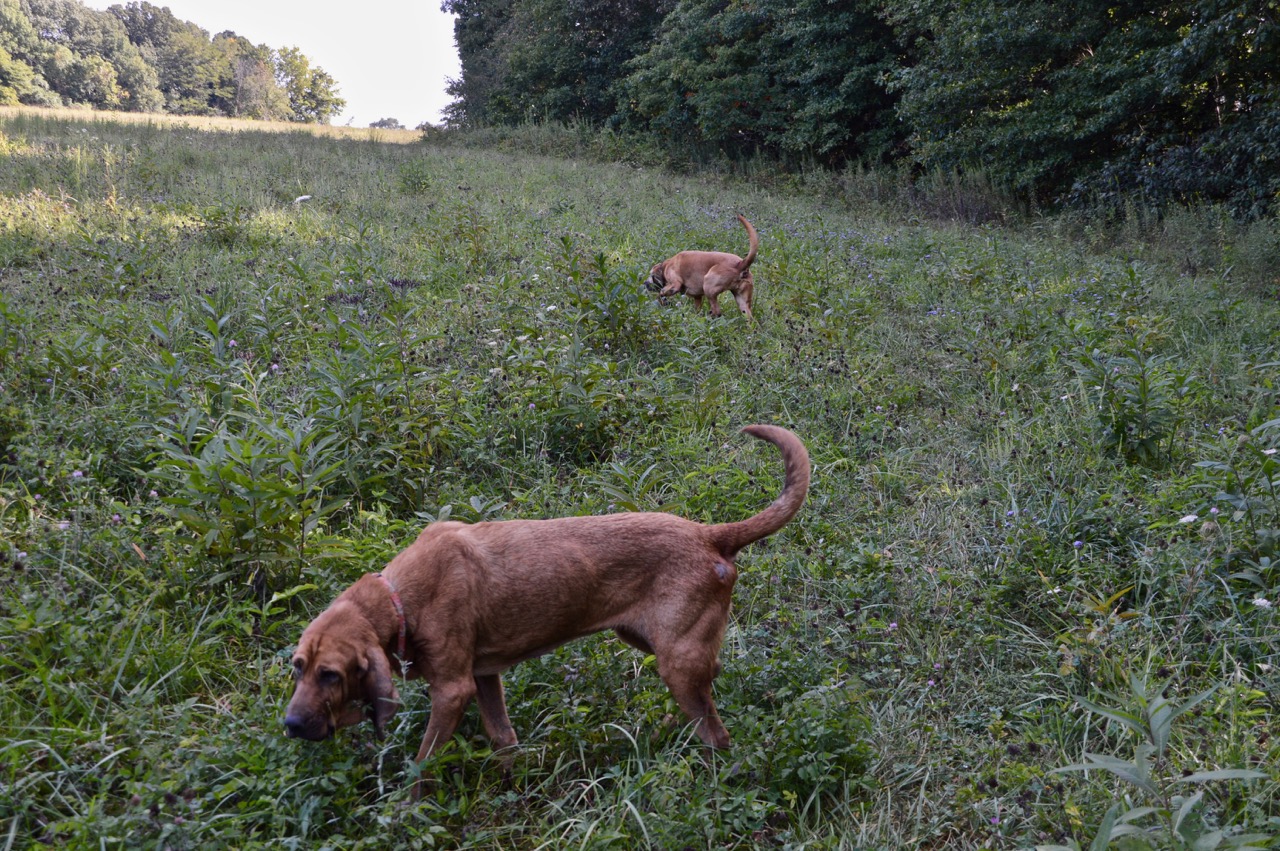 I was also going to post publicly again this morning and letting the few readers know that I had lost my urge to blog recently and might only be back weekly or a few times in the month. That still might happen today. 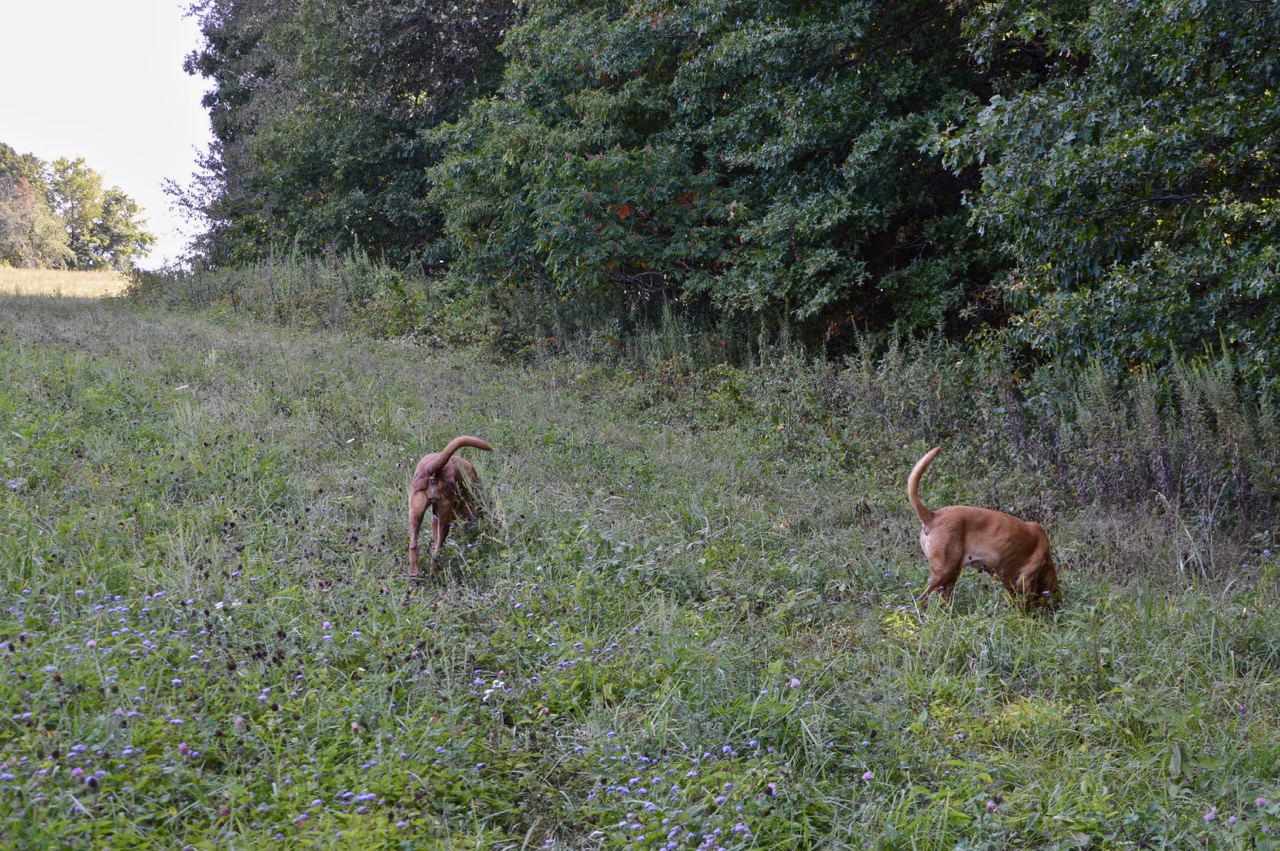 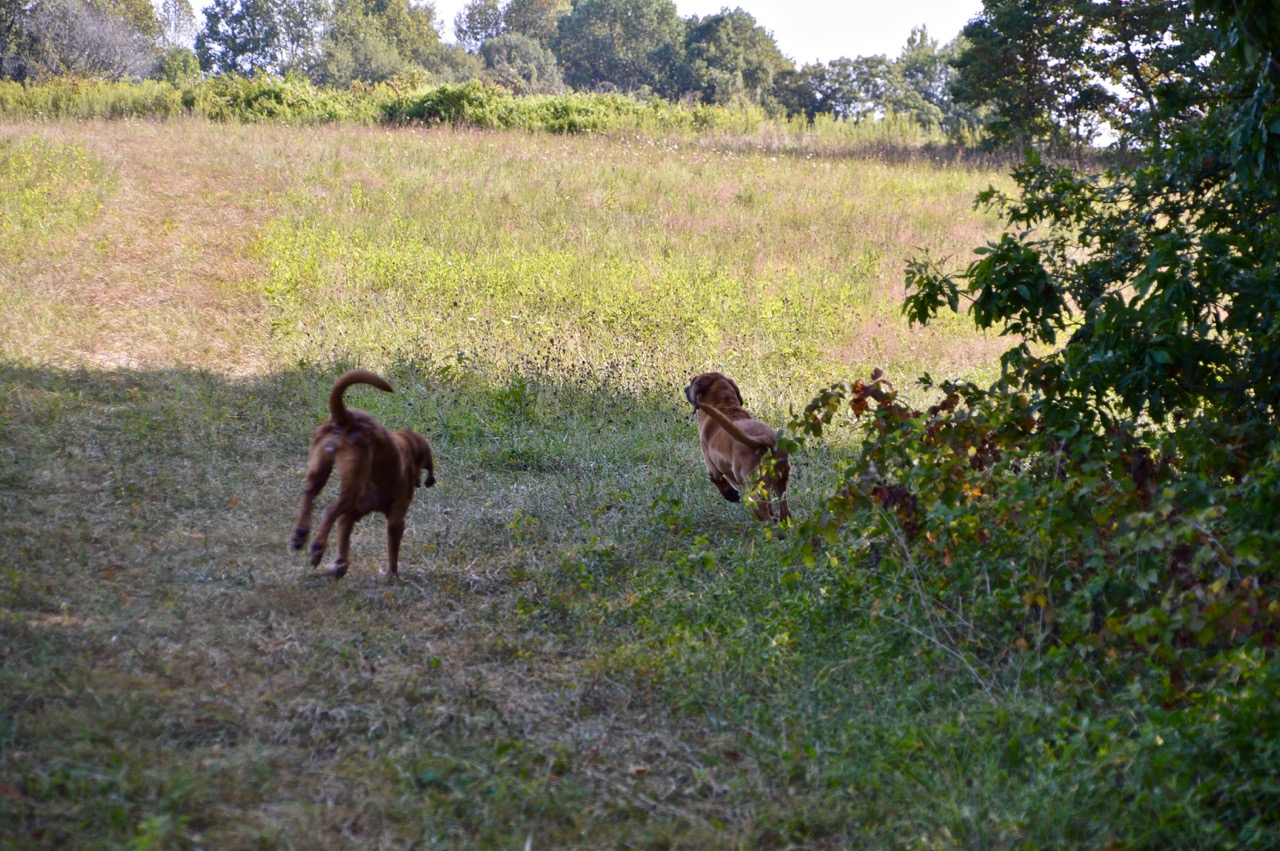 Stella showed more energy this morning than she has in many many months. She ran more often, ran faster and I swear I see her gaining weight back around those skinny hip bones that were protruding out just a few months ago. I will keep feeding her the Sportmix kibble, now rated 3.5 stars. (above average). 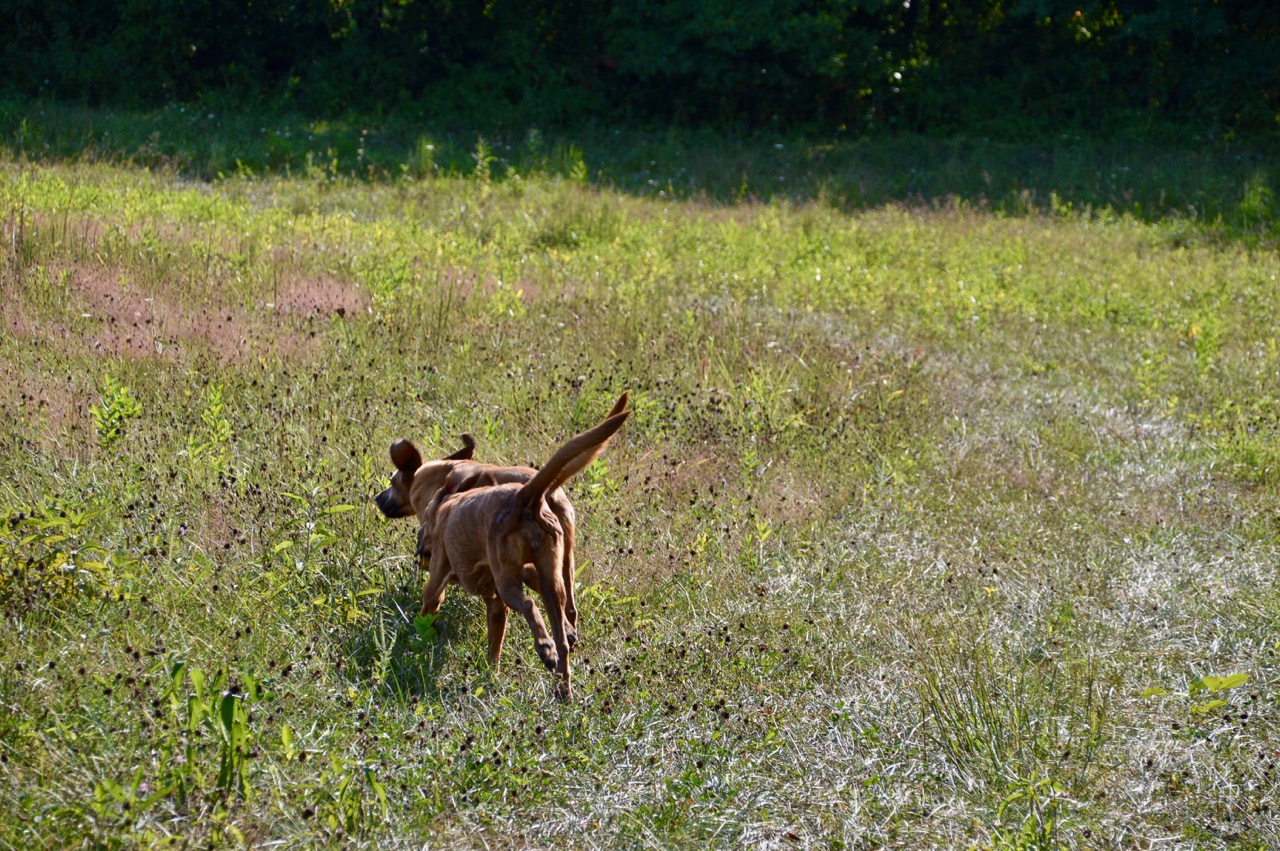 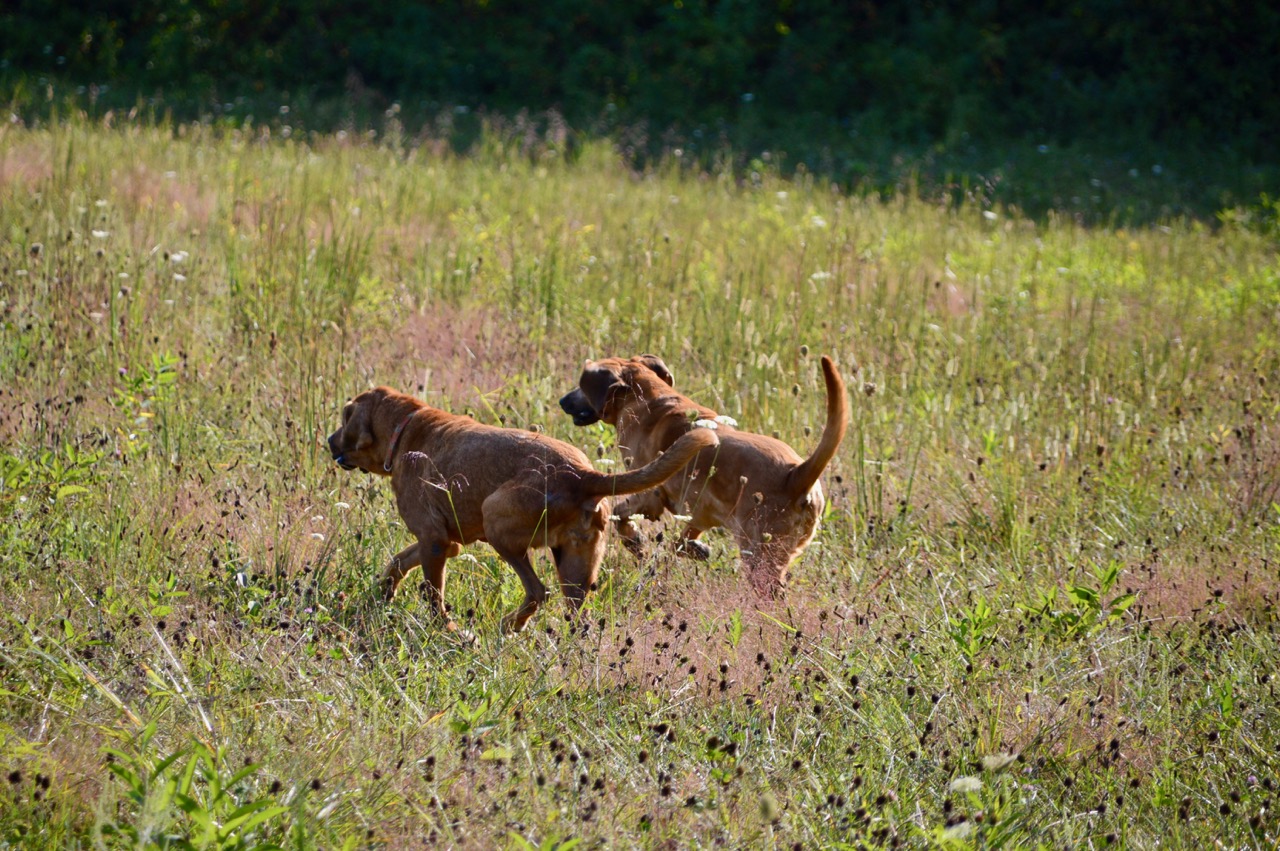 It was great to see Stella running along side of Sadie to different parts of the field while I walked along the path. 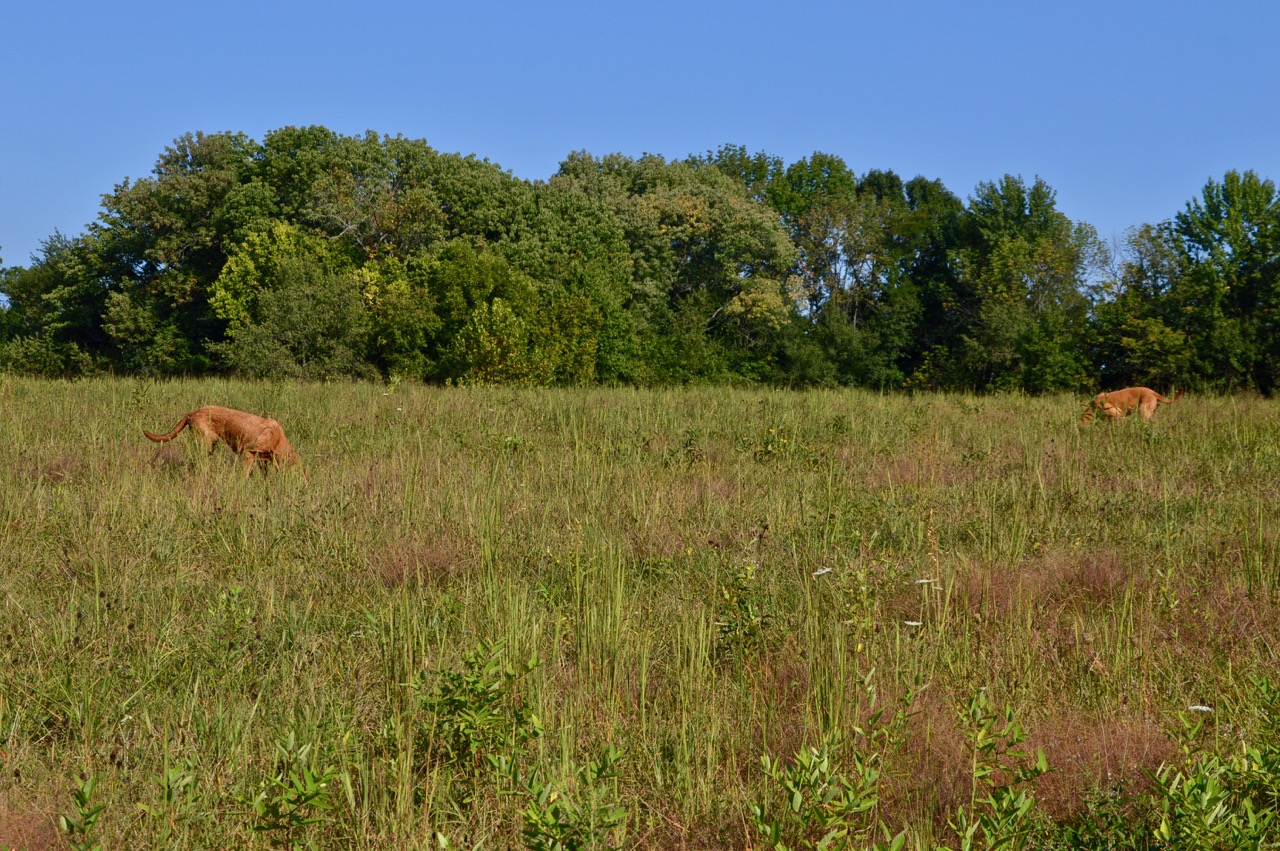 They stayed out in the middle of the field 'grazing' while I headed up to the rolls of hay. Sadie eventually sprinted my direction to catch up with me. She is a great walking hound without a leash. 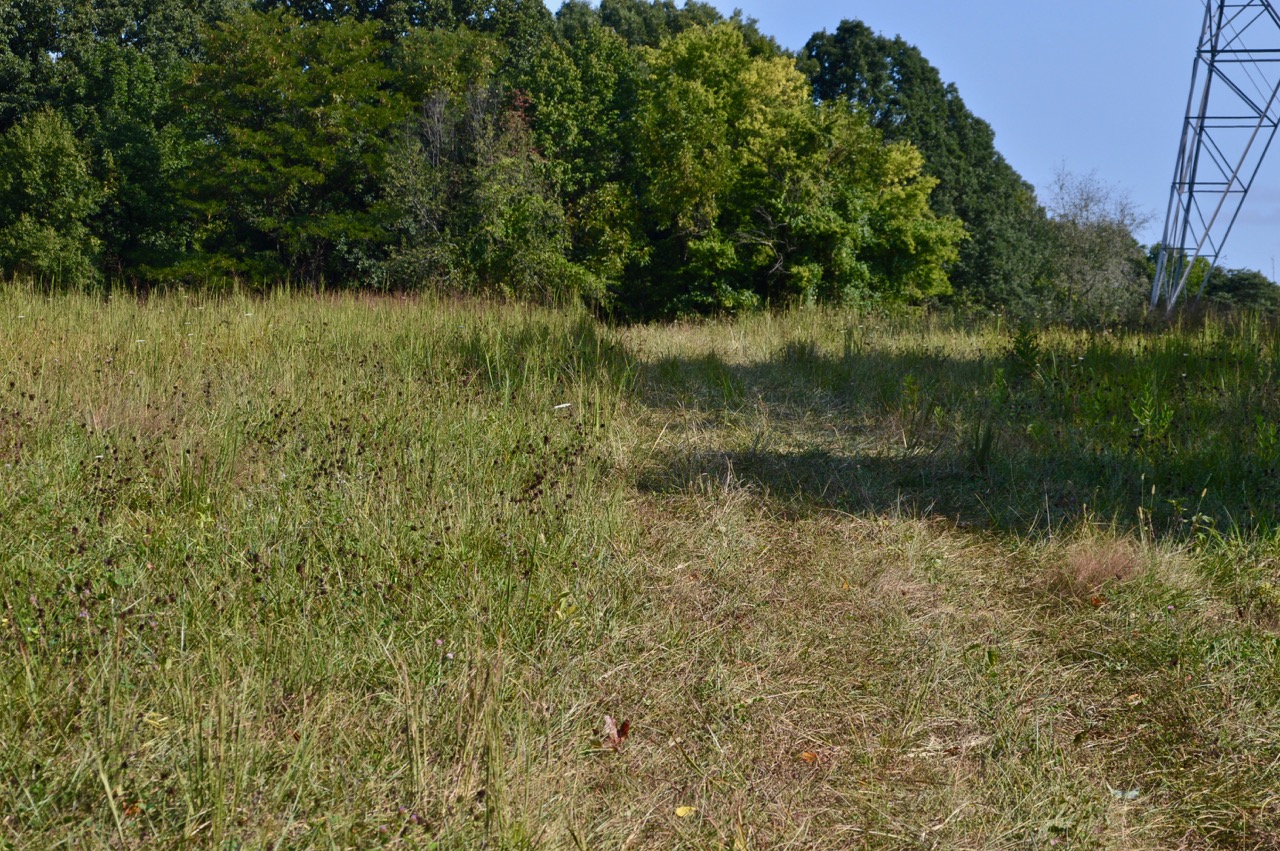 When I drove by a neighbors house yesterday I glanced over at a small field next to their house and saw these same type of ATV tracks showing where Christopher enters this field from those trees straight ahead. He has made quite a few trips over to the 'deer gully' I told him about last Sunday. 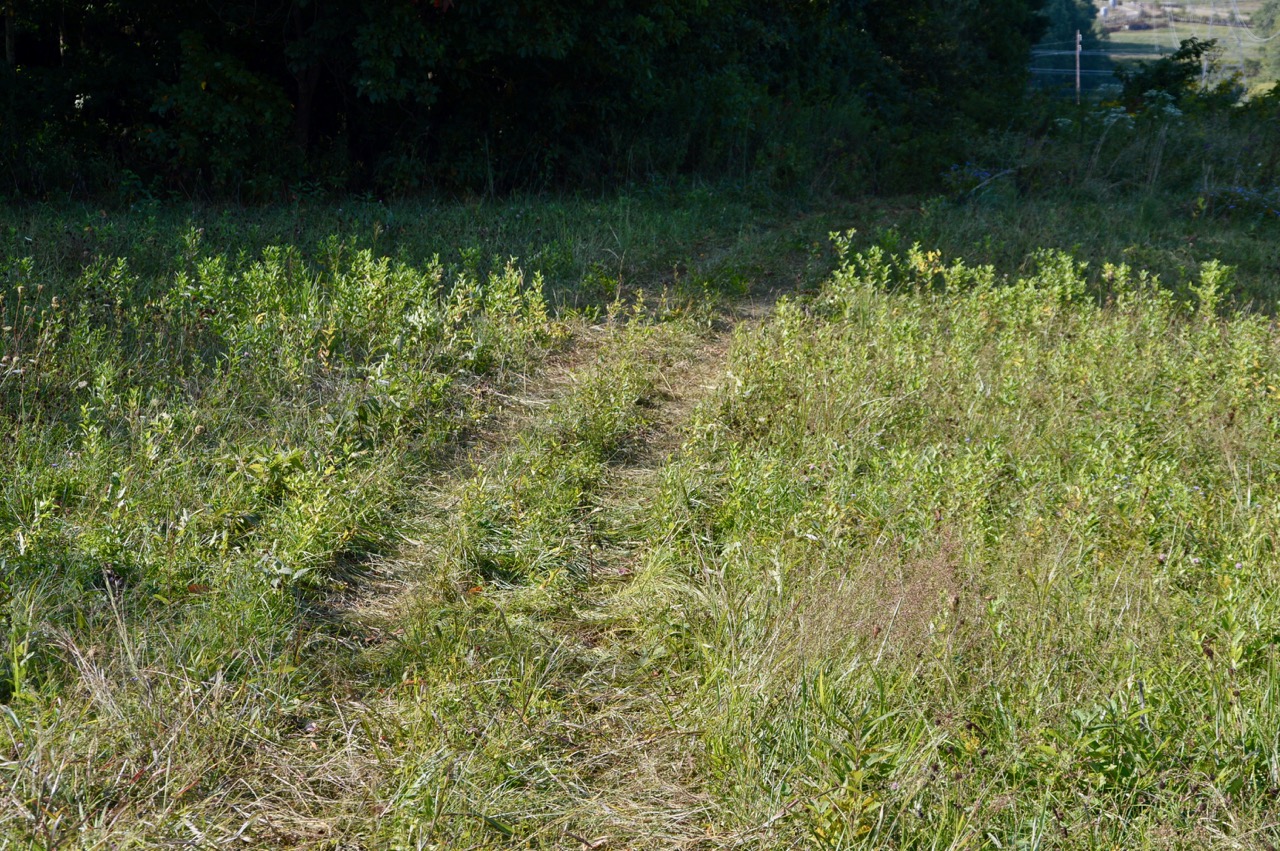 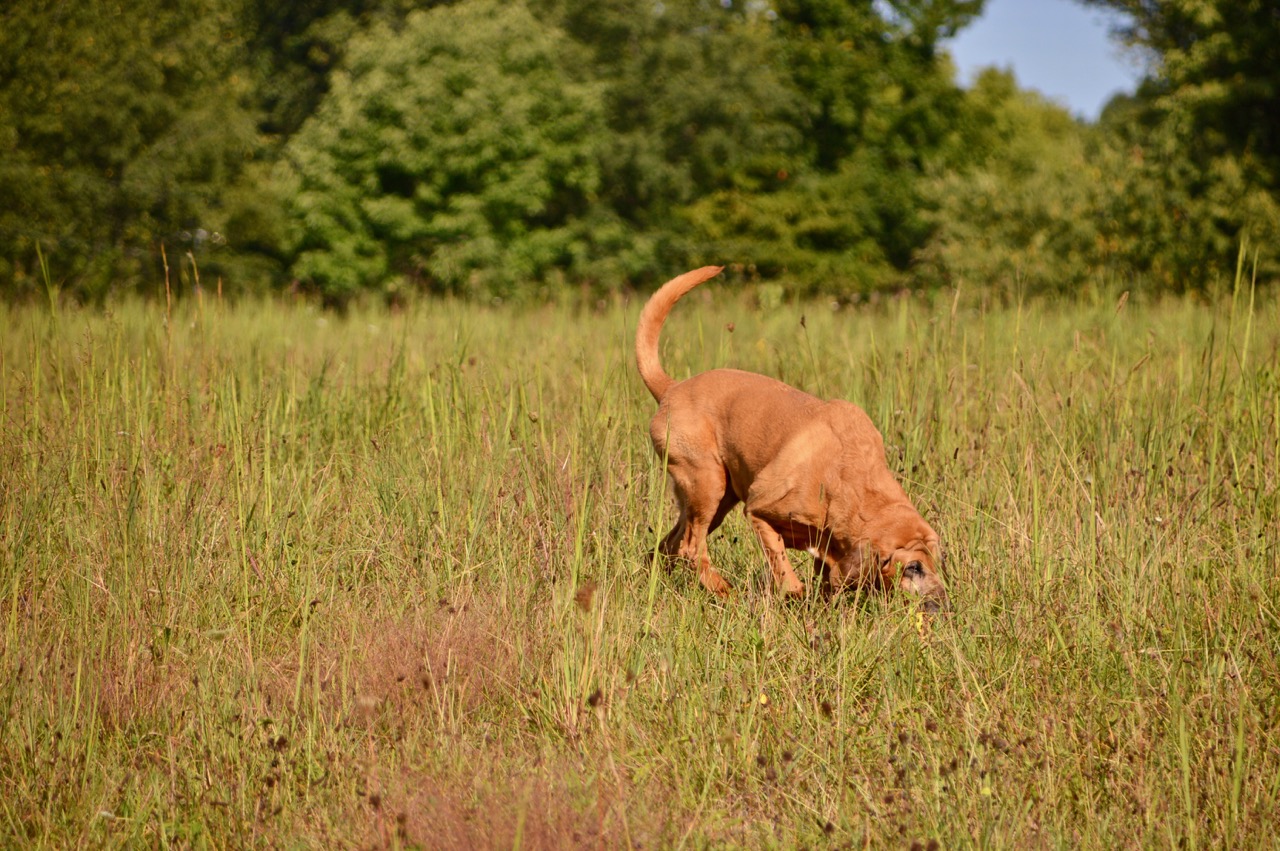 A great, good quality picture of Sadie in the tracking mode. This is one photo I would put on the public blog. Maybe I'll go back to the old format of writing one paragraph and adding about 8-10 photos but ever few days instead of every day. 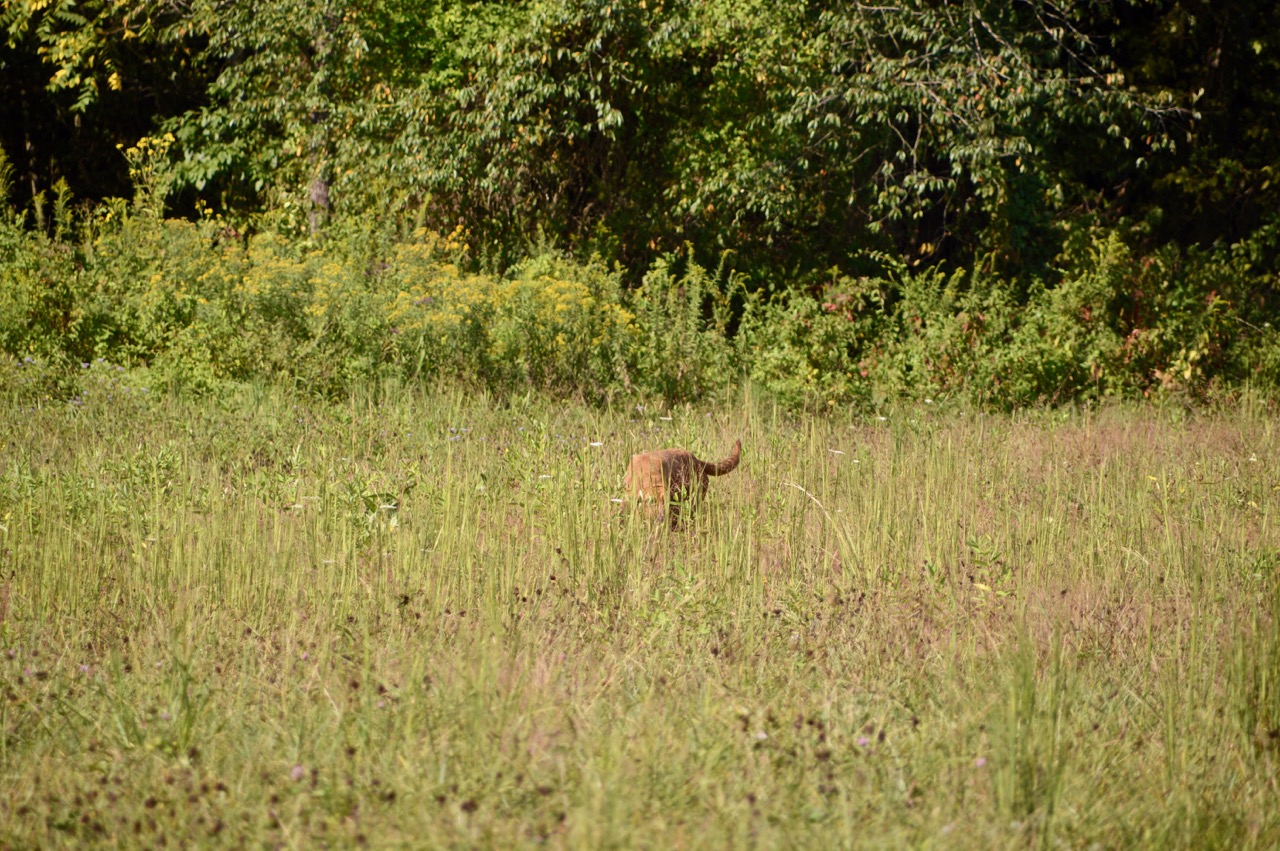 Stella had walked over to her favorite spot in the field. I was wondering if I was going to have to walk that far to tug on her collar or would she come on her own? 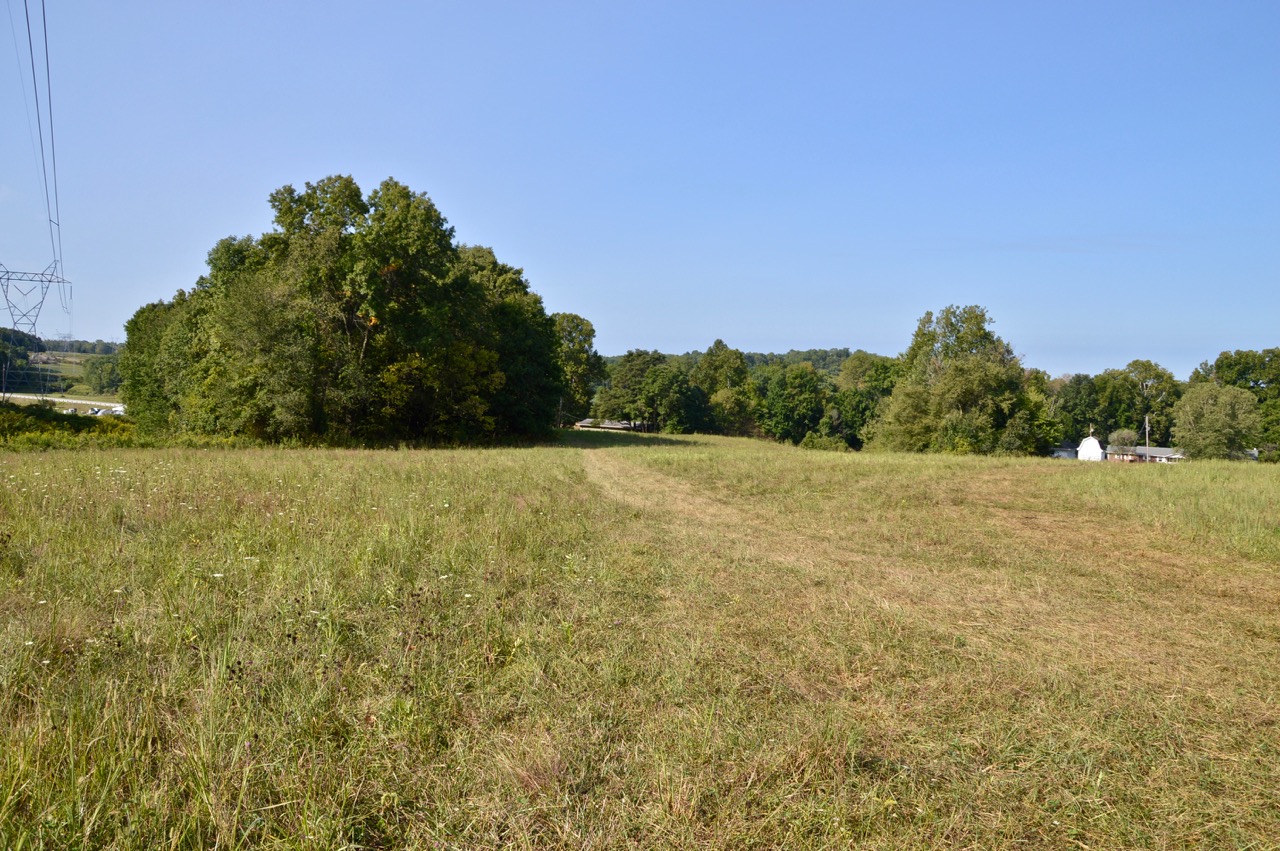 The ATV from Jim's grandkids has really tore up the field this month. It is also much much shorter than last year at this time. Yesterday I looked at my 2016 blog post on the 1st of September. I doubt that they cut the field and bale it this fall. 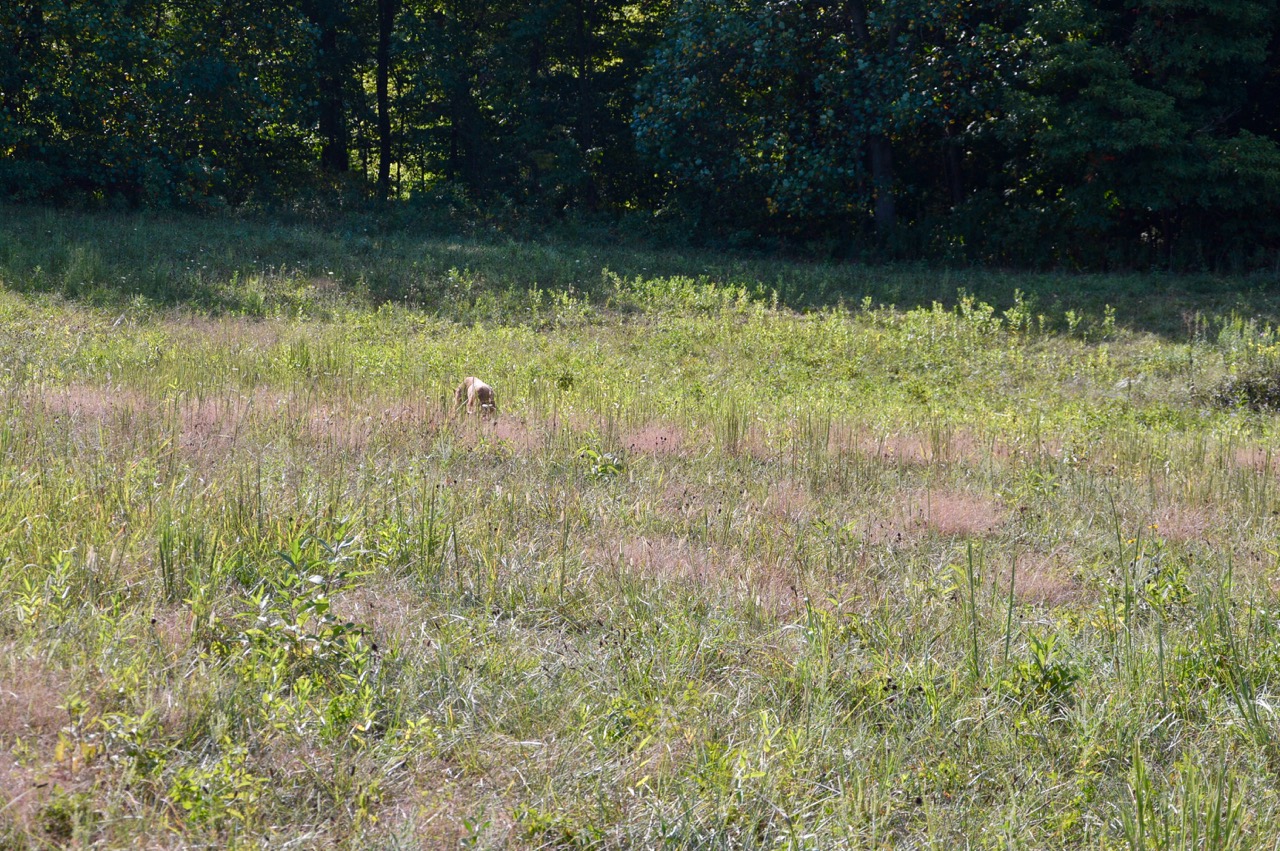 I started walking her direction calling here ... she raised her head and started slowly walking in my direction. 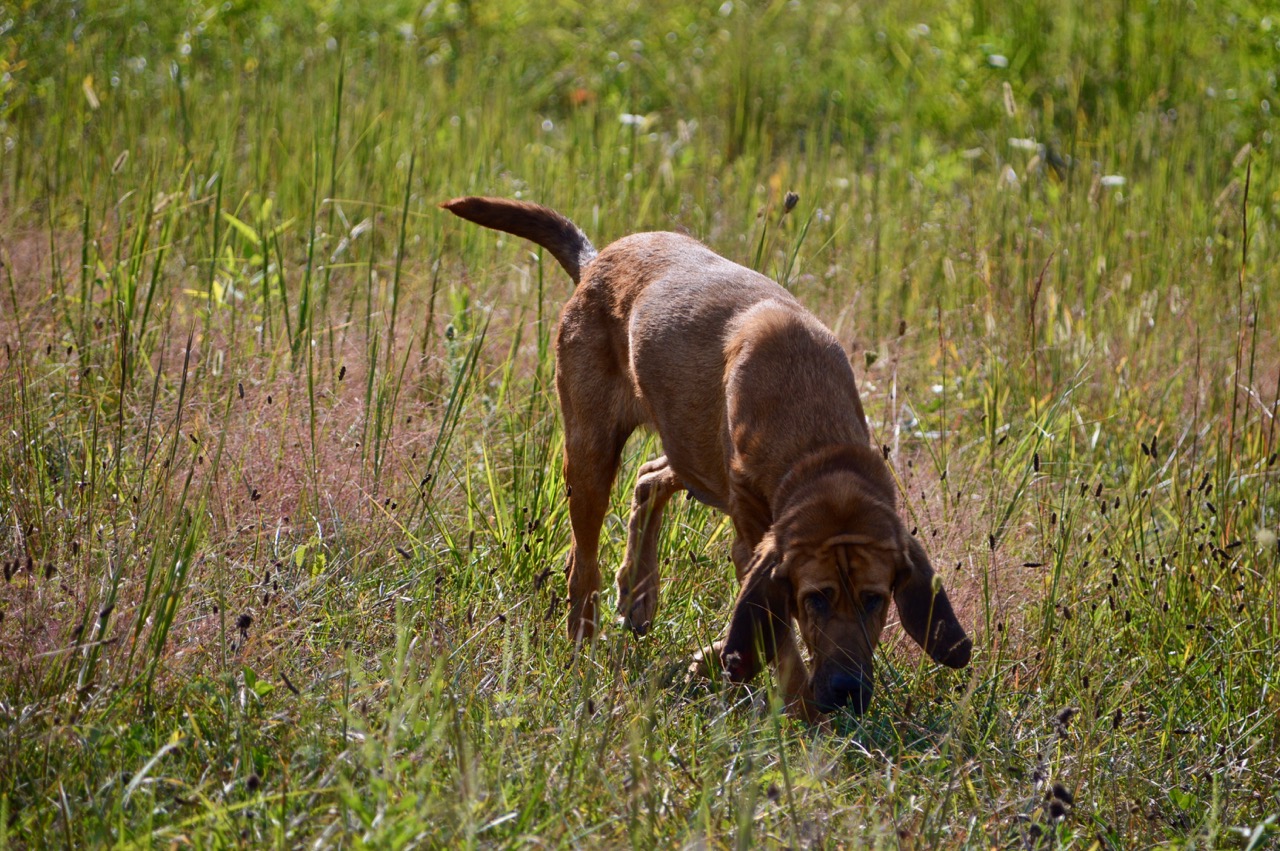 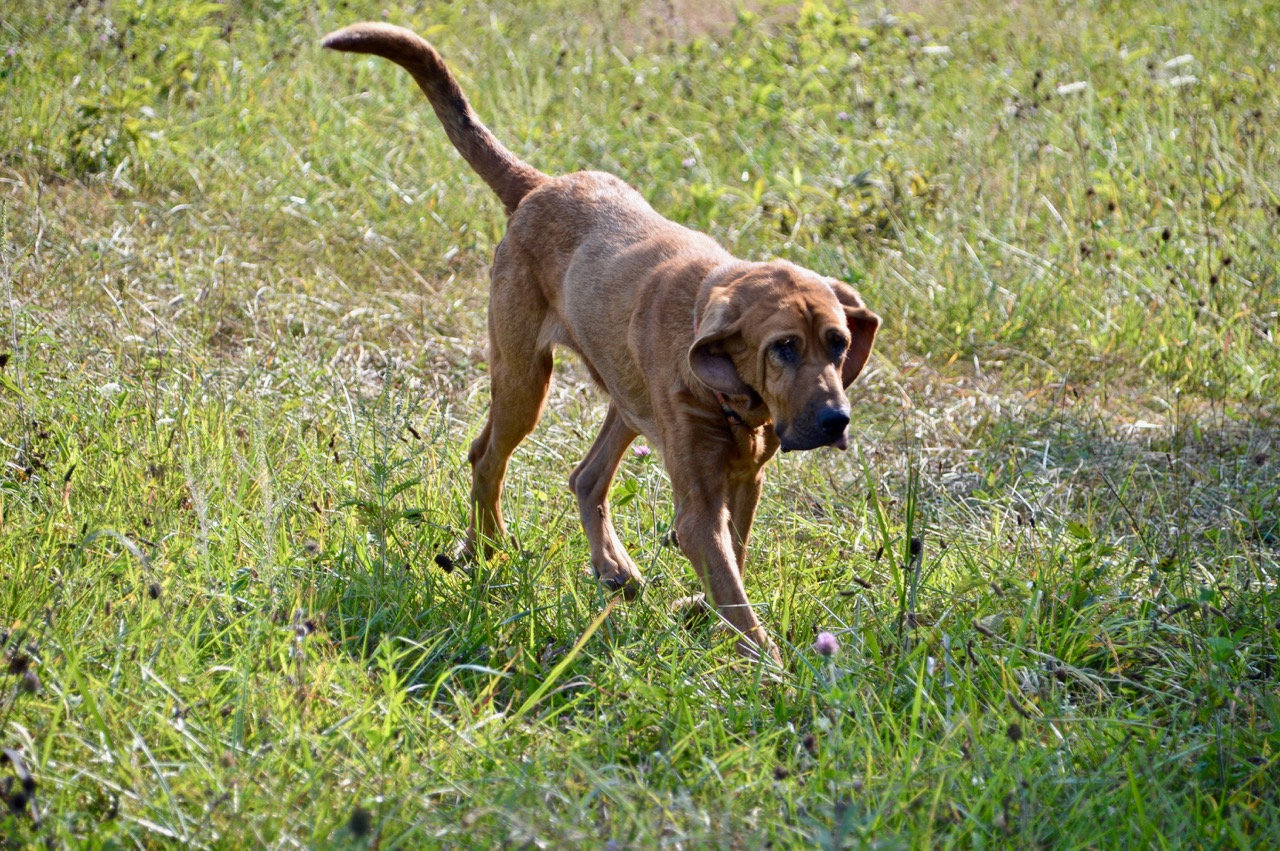 She will always do her mid-path scratch and then trot to catch up to me.

Well college football in 52 minutes. There are a lot of good games to watch today. Some of them are on at the same time. Maybe next year I'll buy another HD tv for watch multiple games at once. It would look stupid though with a tv mounted on the wall above the one that sits on the table.

Life is back to 'normal' now with College Football starting here in 'the tropics' of Southern Indiana.