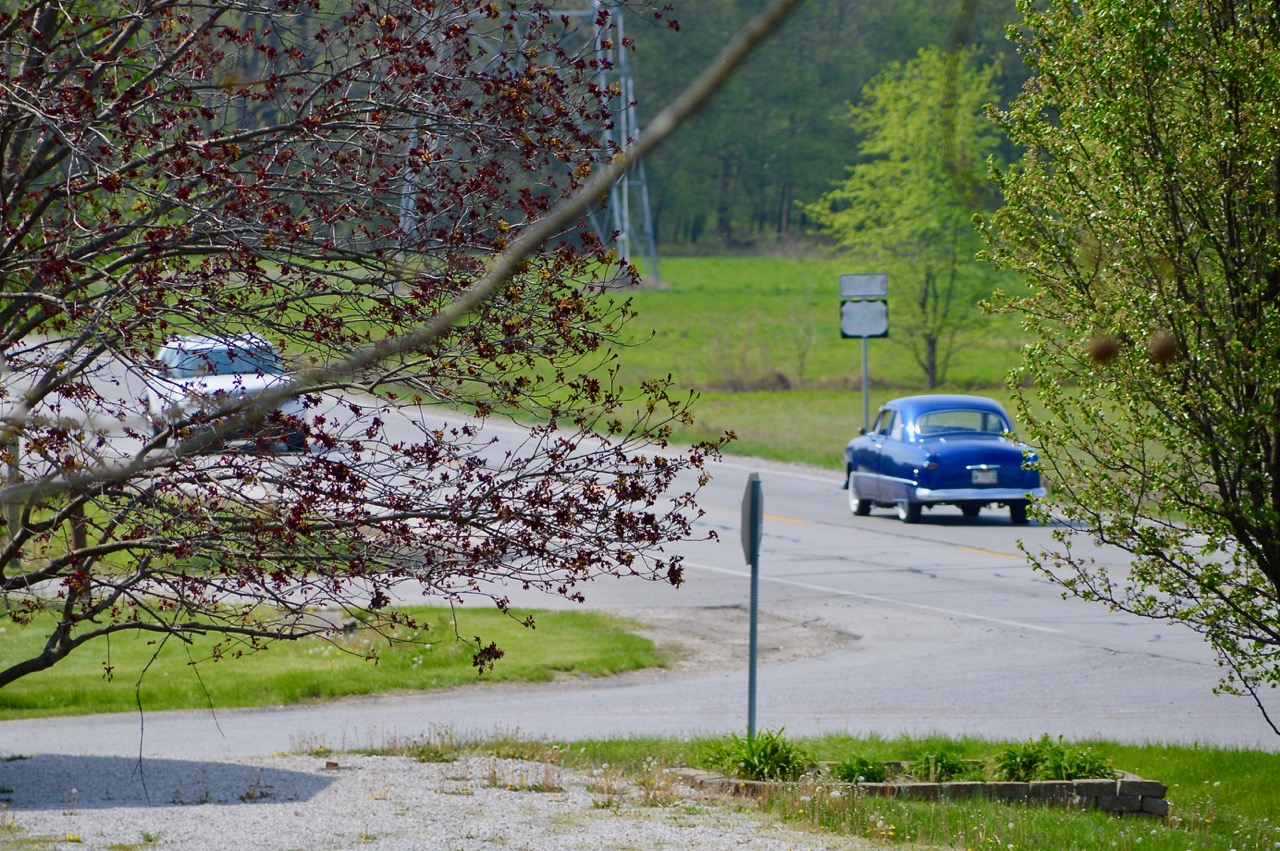 You may have noticed some of the recent photos I posted of farm equipment passing by the house. Just like my outdoor schedule, their activity is also based on possible rain. Consequently I mowed the yard this morning a few hours earlier than I planned on, even with the grass a little wet. Luckily I had my camera on Wednesday as I caught this great looking Ford passing by. It's locally owned and is seen on the perfect weather days. 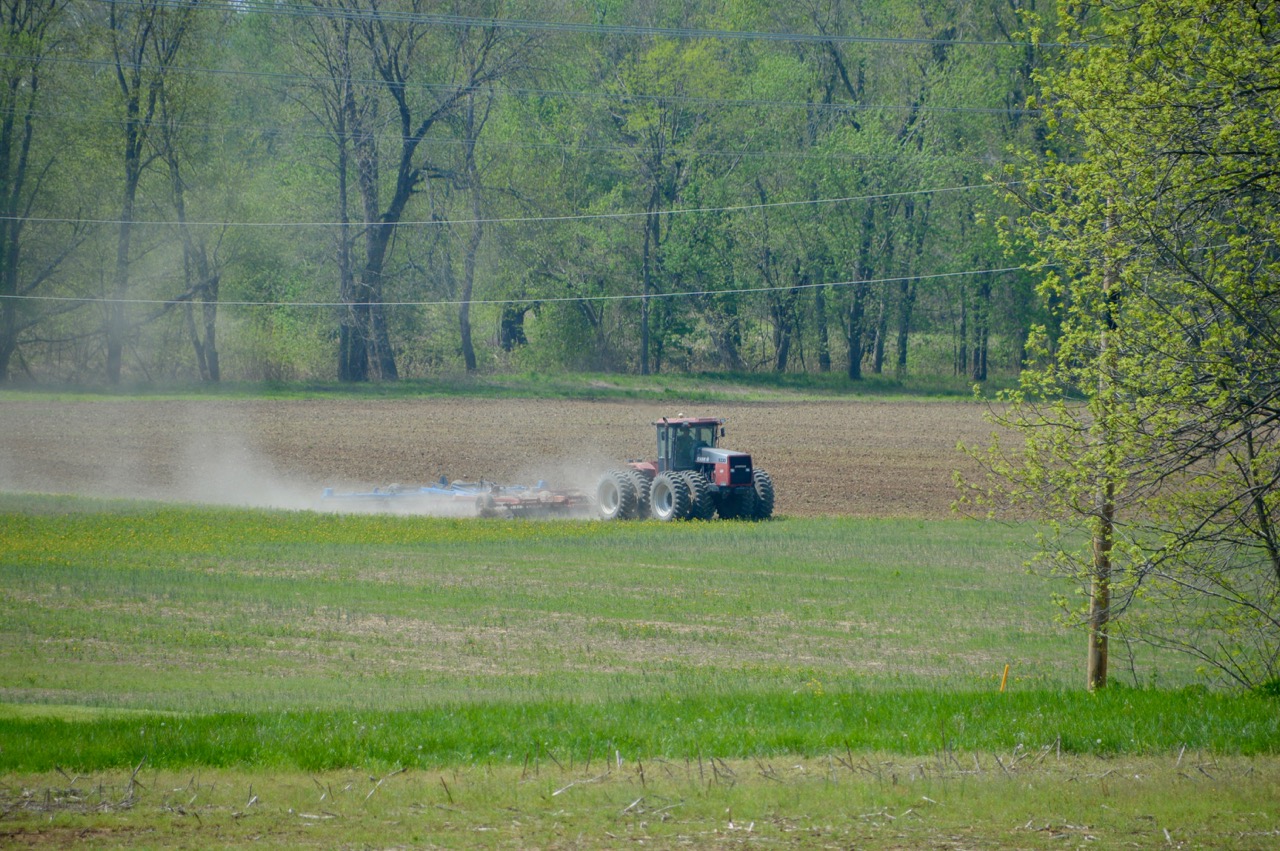 As usual the rain is anyones guess. It was suppose to happen Wednesday afternoon, putting these guys hard at work that same afternoon. The rain didn't show up. Then thunderstorms scheduled after midnight, didn't show up. Yesterday morning was to bring severe thunderstorms. The skies turned black, Stella whined a little while stood and moved to a different sleeping spot, but very light rain passed through. 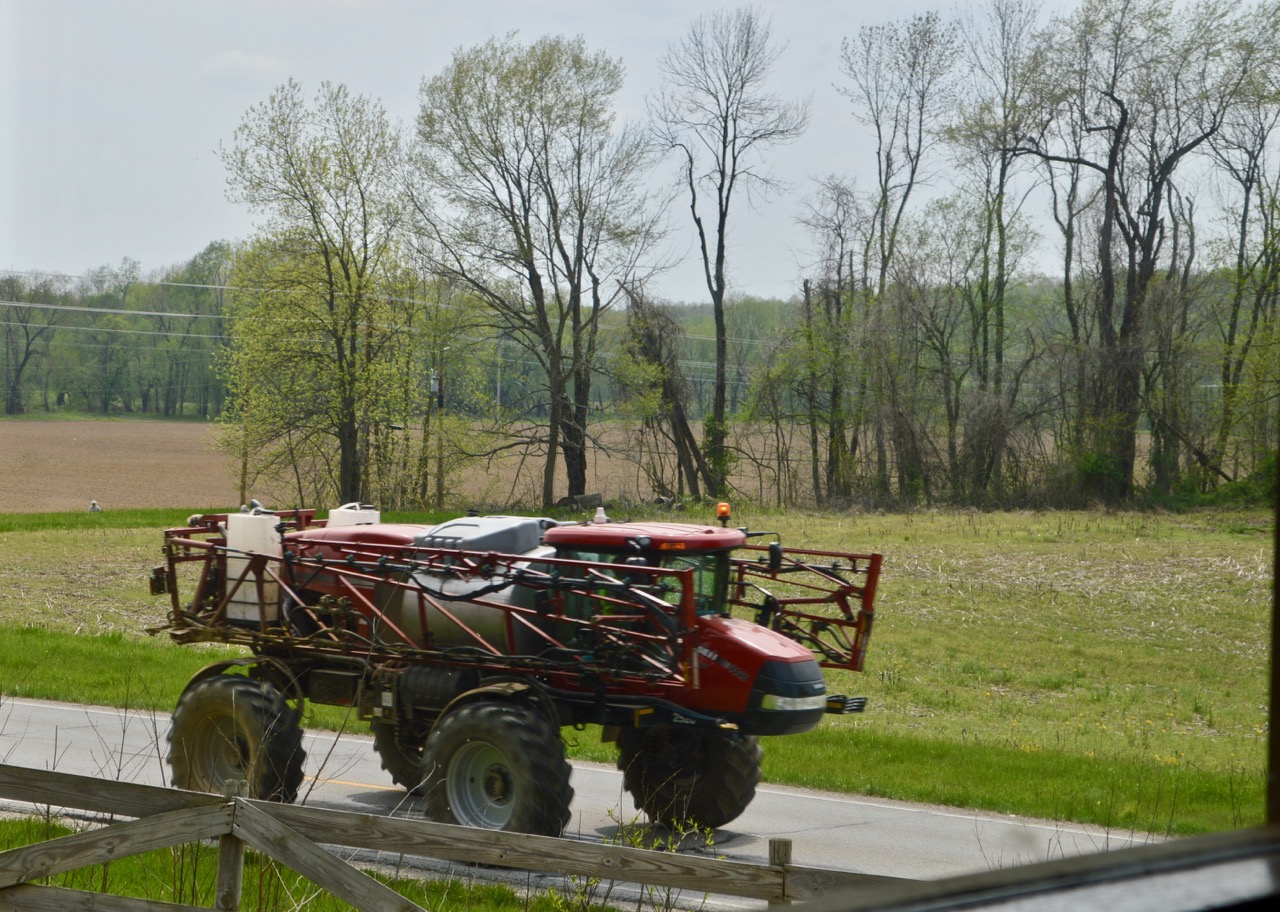 Stella did not pace more than 3' away before she laid down and took a nap. The inside of the house was so dark you would have thought it was in the middle of the night. None of the storms bother Sadie or Heidi. 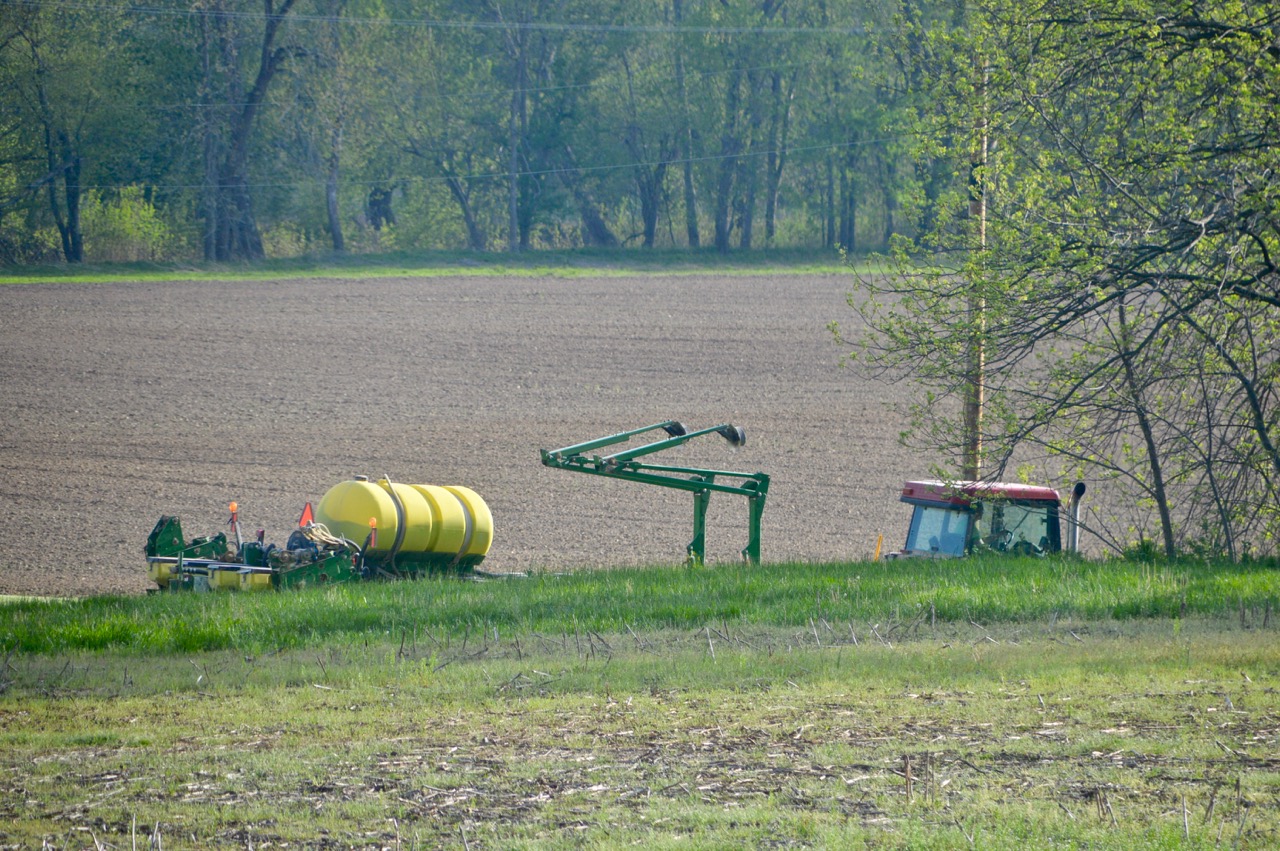 There will not be a field if bright yellow flowers (weeds) this year. He must know more than I do about the May weather or he is a gambler for planting this early. It does not take much for that field to flood and that has happened as late as the first week of June. A lot of the field was under water just a few weeks ago. 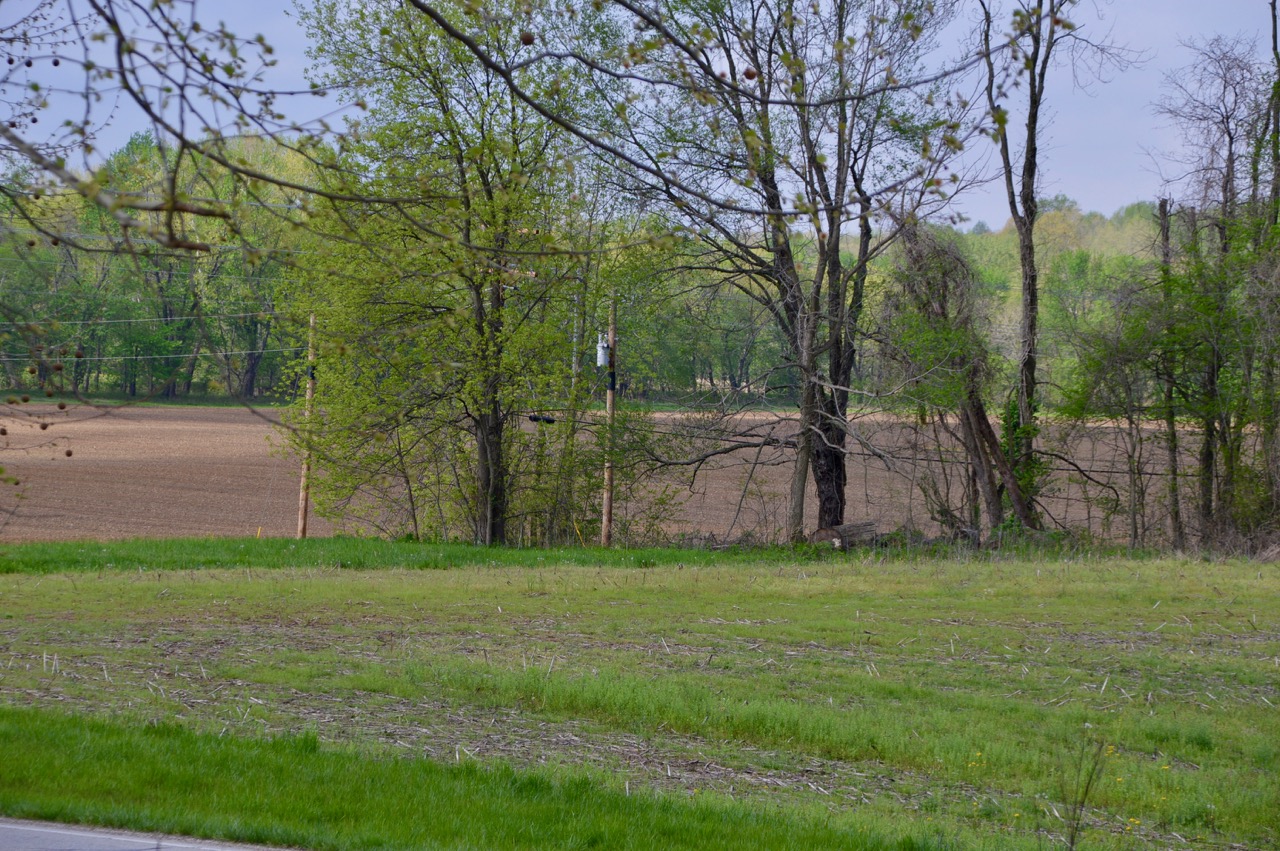 I was just happy to get the yard mowed before today's rain that was scheduled at noon. Yet as I started this blog post I took a look at Intellicast weather radar and there wasn't a cloud of any kind within 300 miles of me. So one of my major activities today was finished before 10am. 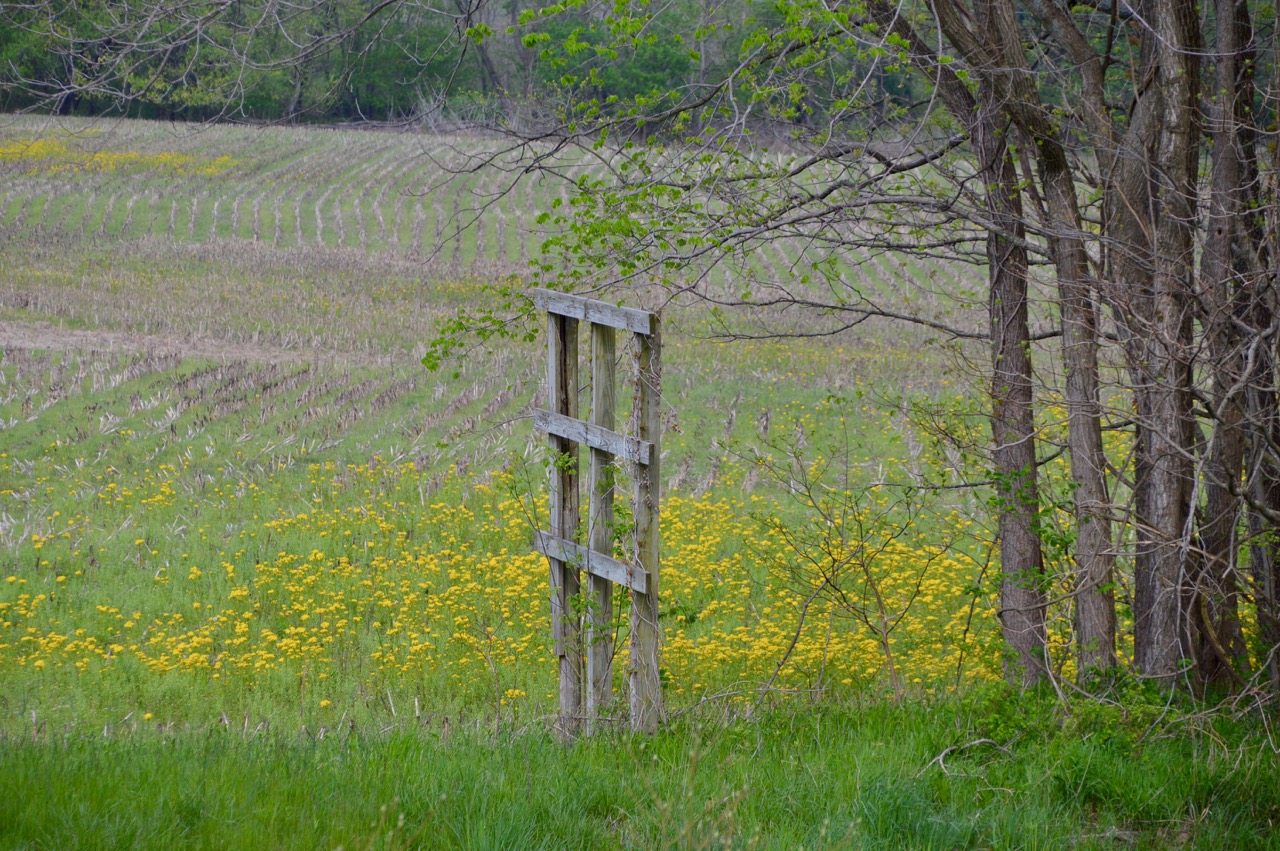 Finishing the yard that early confused all three of the hounds. They usually get a walk when I finish mowing later in the afternoons, so when I stepped inside the house to cool off and grab a glass of water Heidi started barking, Sadie started bouncing and Stella started howling. Those actions told me they didn't think it was time to walk, they thought it was time for lunch but that wasn't going to happen at 9:54 am. 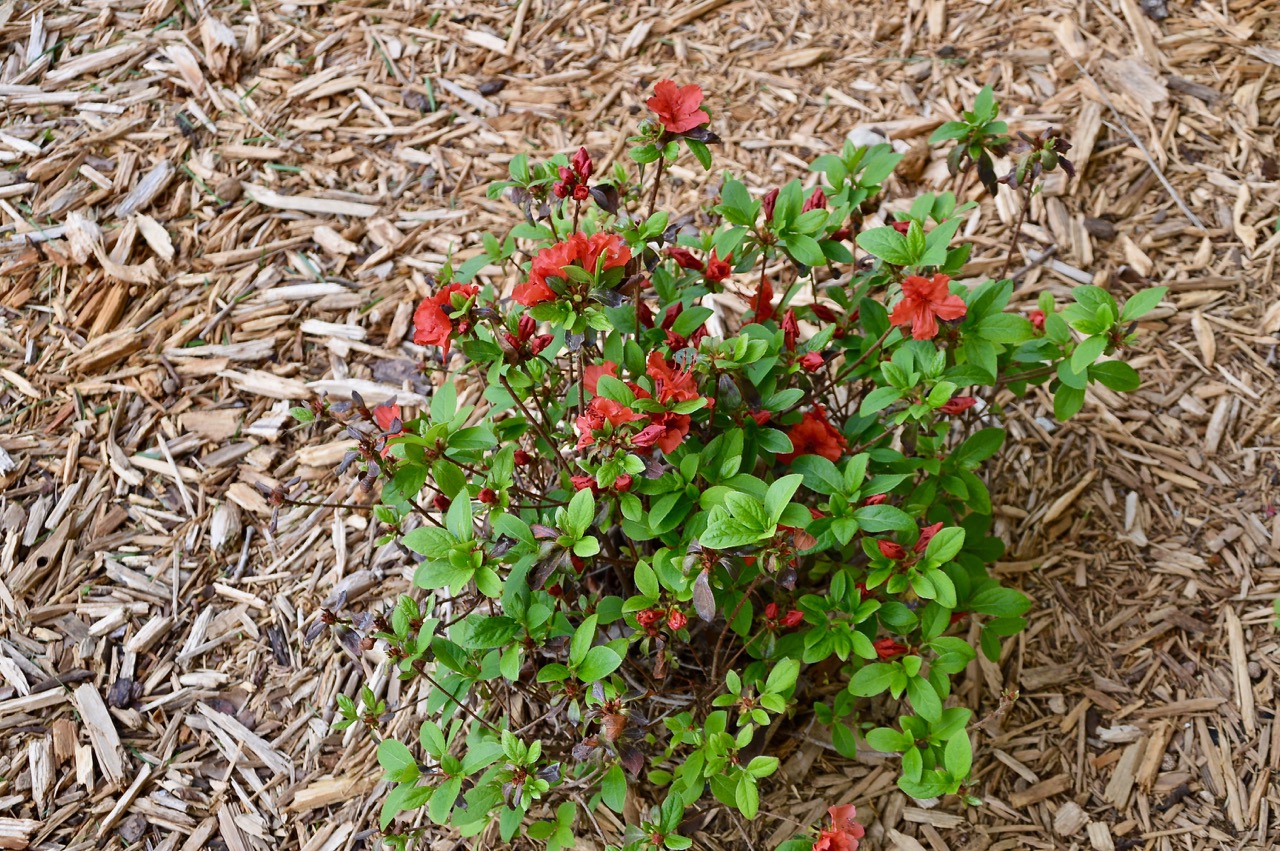 After the brutal winter we had with almost a month solid of temperatures below 32° and a lot of nights below 0°, I am now declaring the Azaleas I planted late last July as being hearty survivors. The  four of them are centered in the flower beds across the front of house but that puts them under my wider than normal roof overhang ... so they don't get water from the rains. It will take a few years for them to get large enough where they can be seen 100' away down the hill. 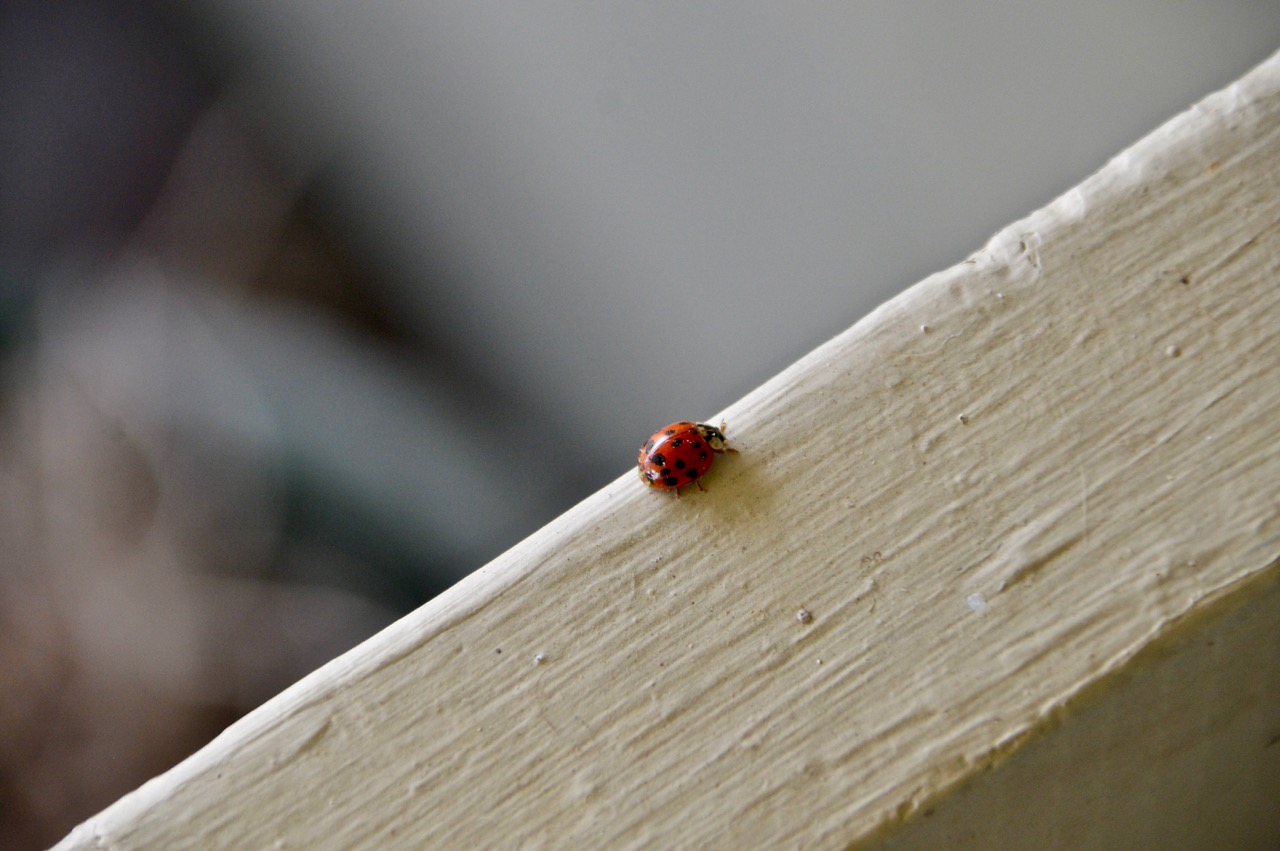 Another sign that Spring is officially here ... this ladybug was patrolling the area around the house making sure things were clear of any kind of harmful bugs. Plus the sparrows have decided this year to move their nest back outside on top of the electric meter instead of the corner of my carport. I slid my hand up inside the nest and felt a perfectly formed cutout bed. 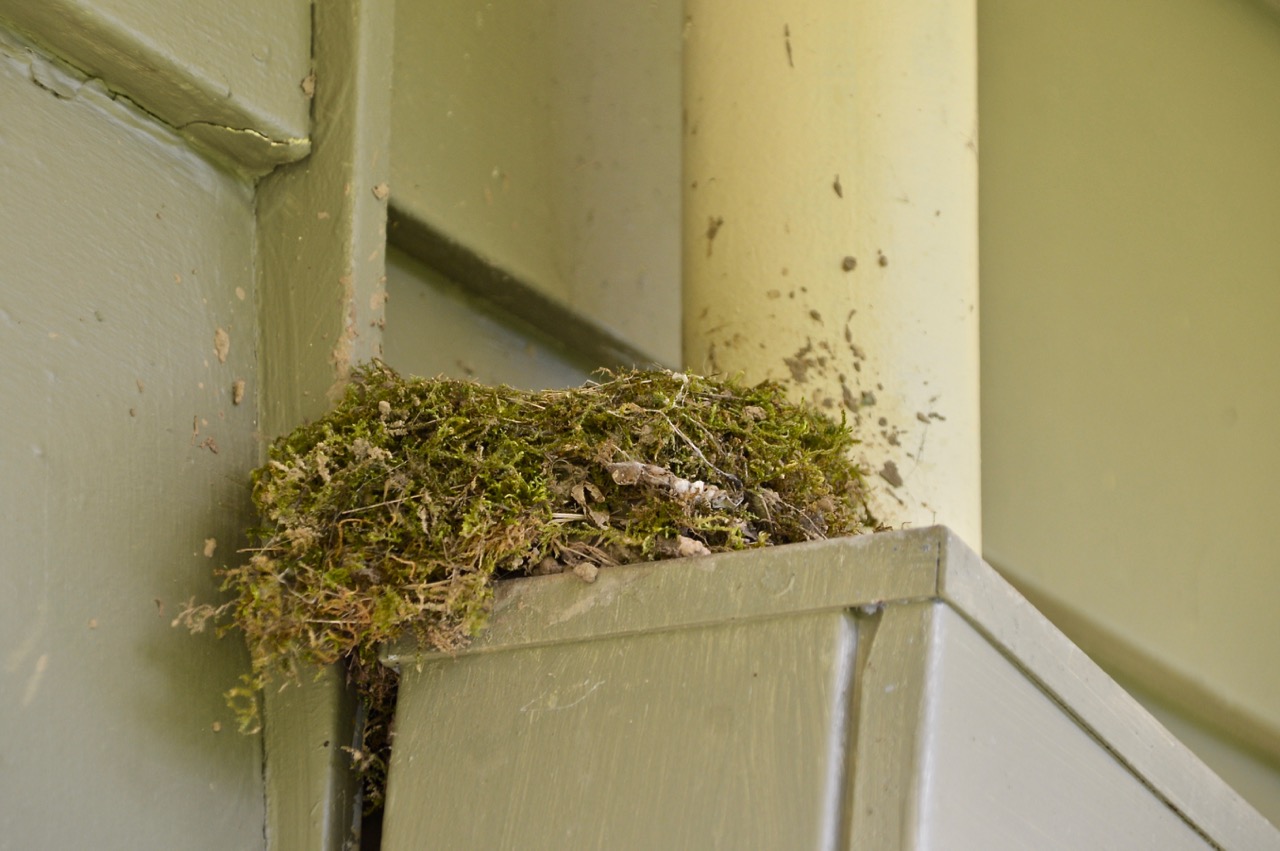 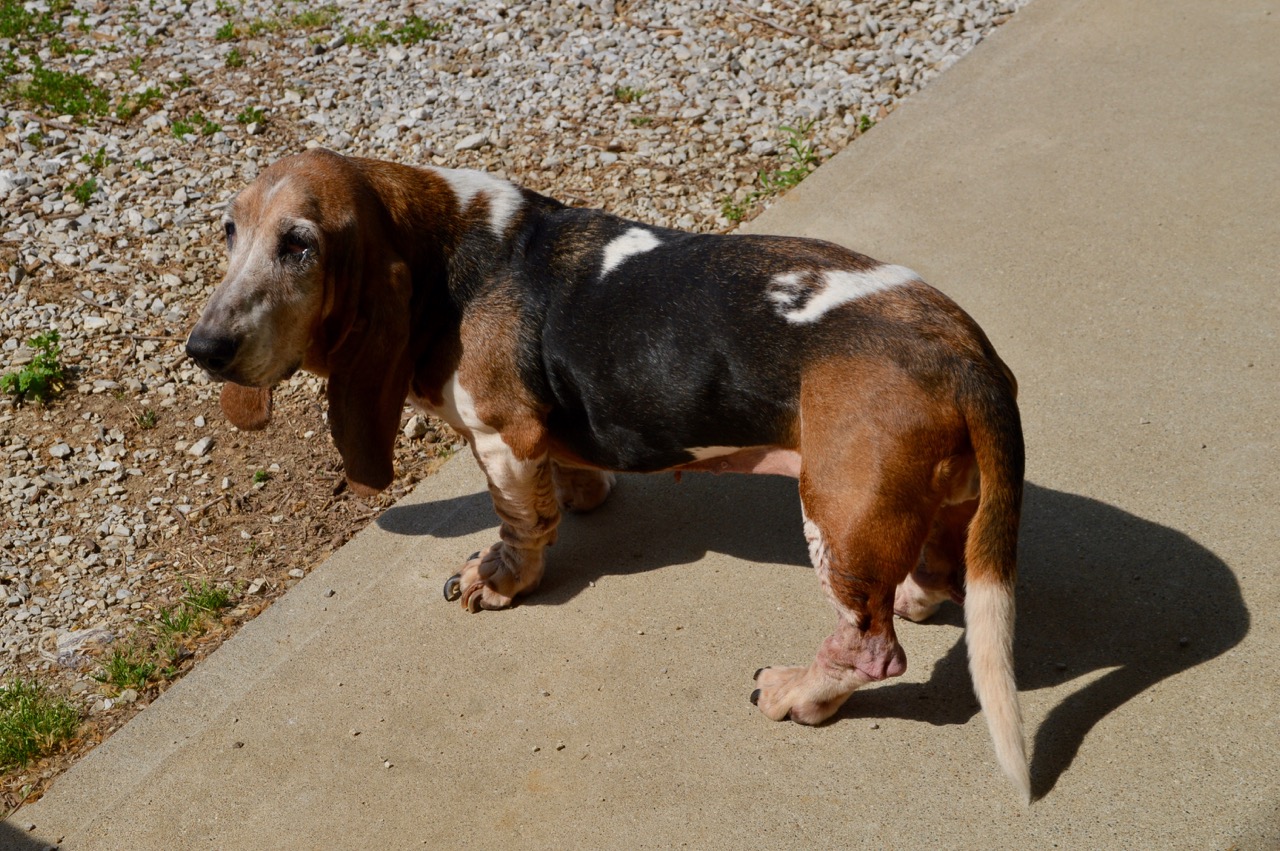 Heidi has been outside every day but most of the time that she is laying in the backyard enjoying the sunshine, my camera is inside. All of us have been spending a lot of time outside enjoying the weather while Sadie roams the field. Stella is back to taking naps under the sun but Sadie is just too mentally busy with tracking to lay down and enjoy some time off. 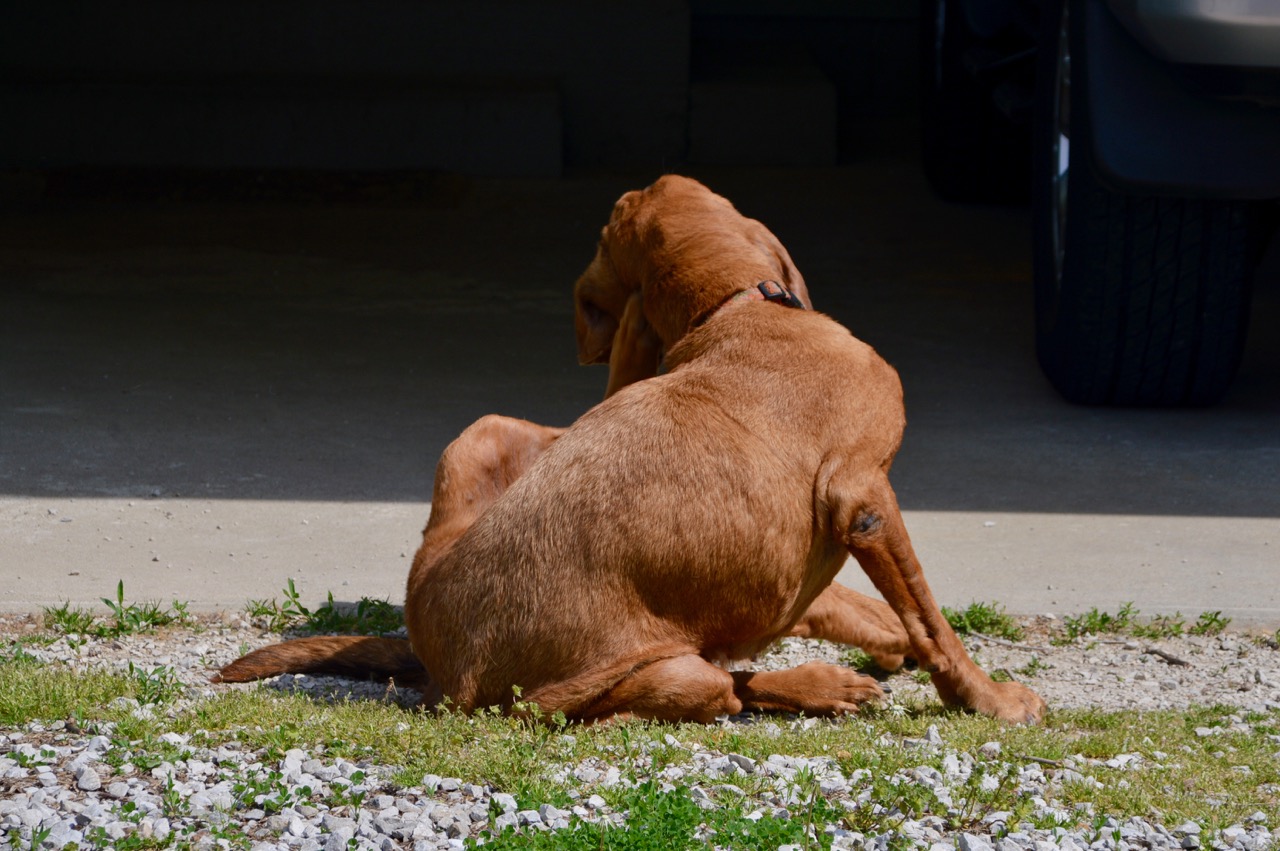 Stella lets me know it's allergy season ... she itches more now than any of the other 11 months. 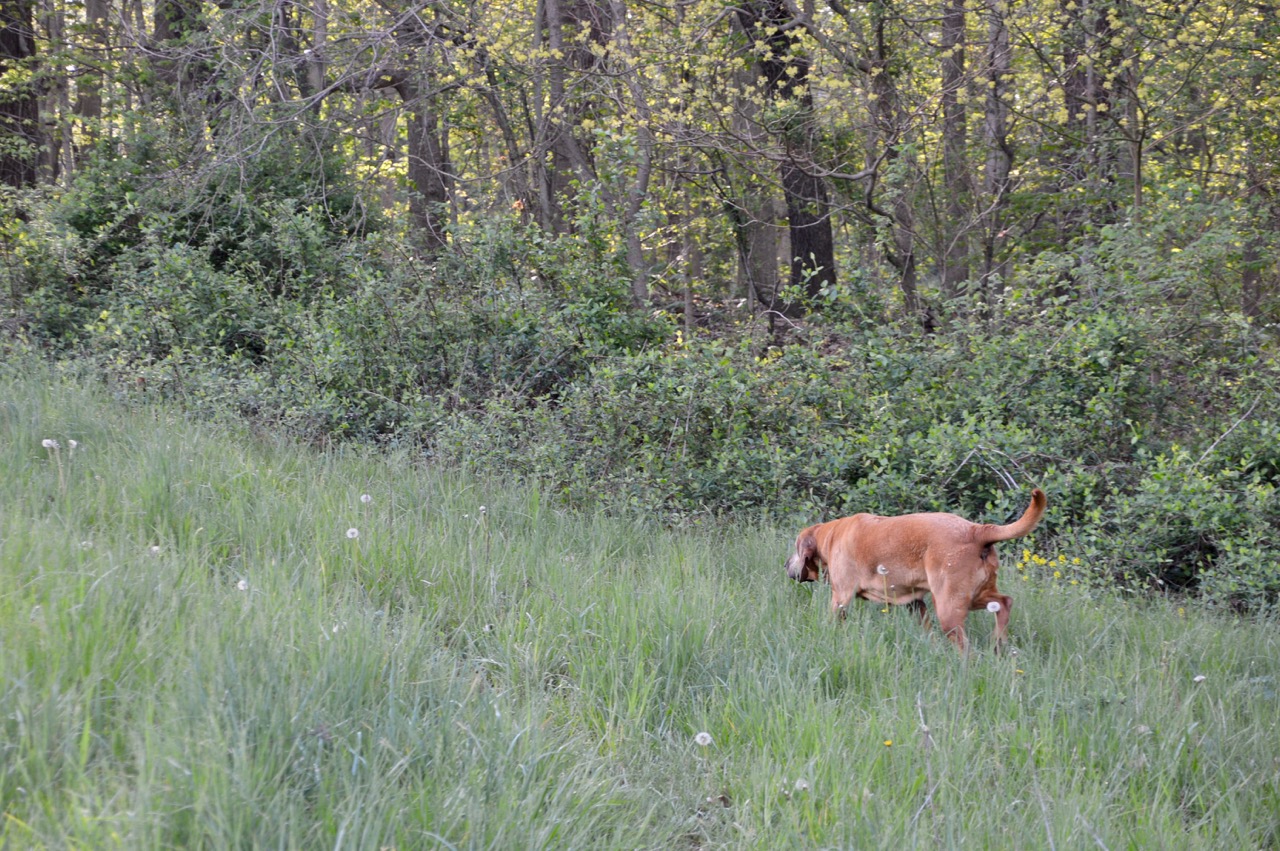 As you can see the field is growing by the hour. It will not be long before the hounds are partially hidden as we walk the field. Sadie seemed as if she was in a hurry this morning, she rarely stopped or look for me or Stella. 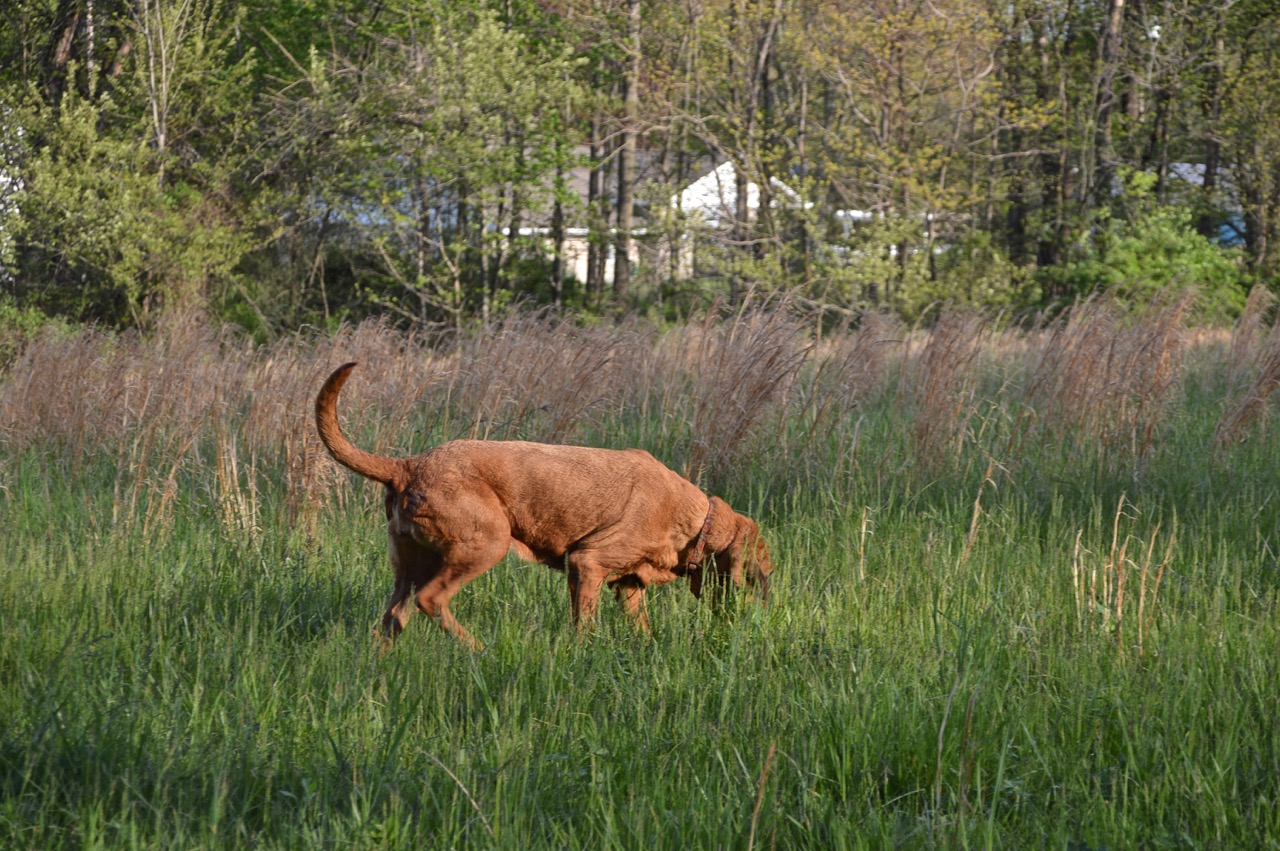 I've been keeping a keen eye out for deer in our early morning walks and the last walk of the day usually between 5p-6p. I haven't seen any ATV tracks nor have I see any signs of deer. 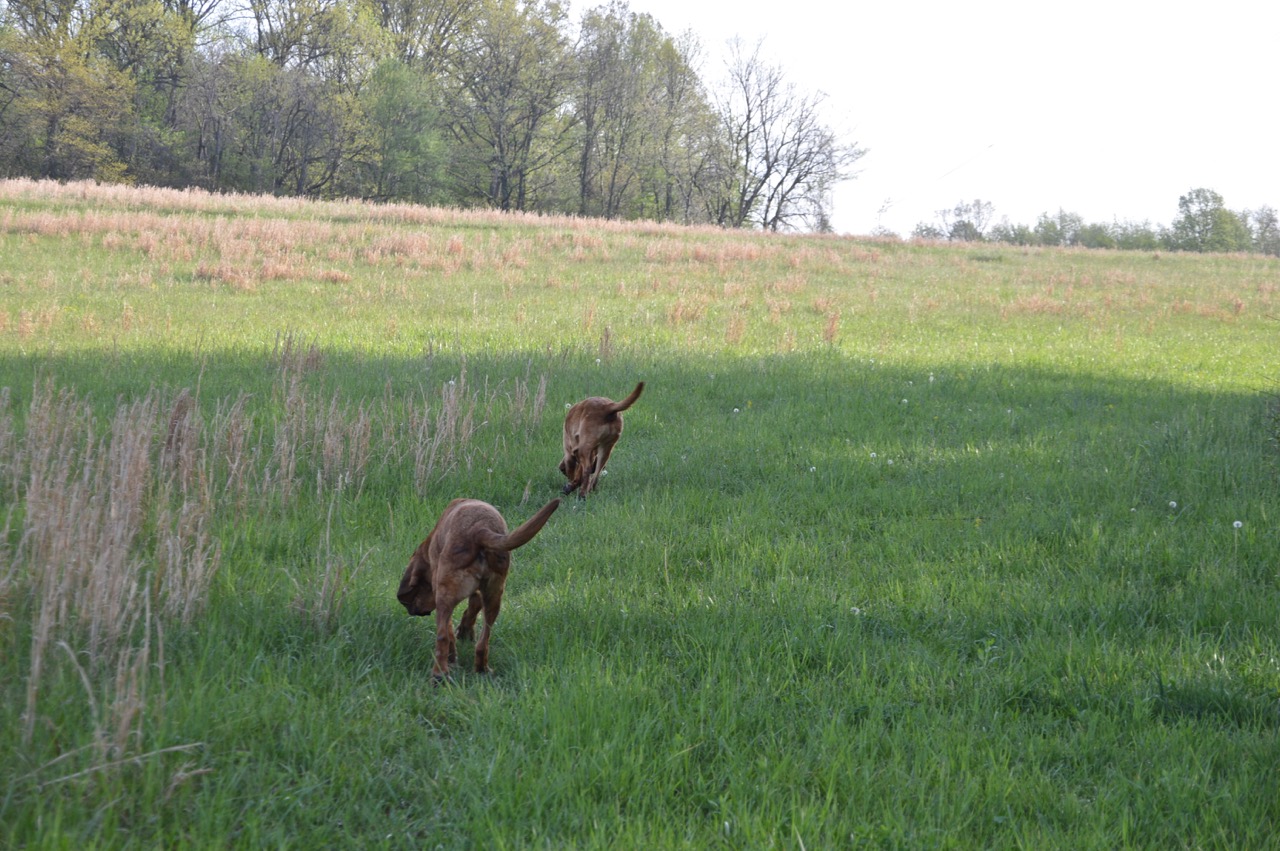 Stella again followed the "over here" command and headed our direction instead of the far right corner of the field. 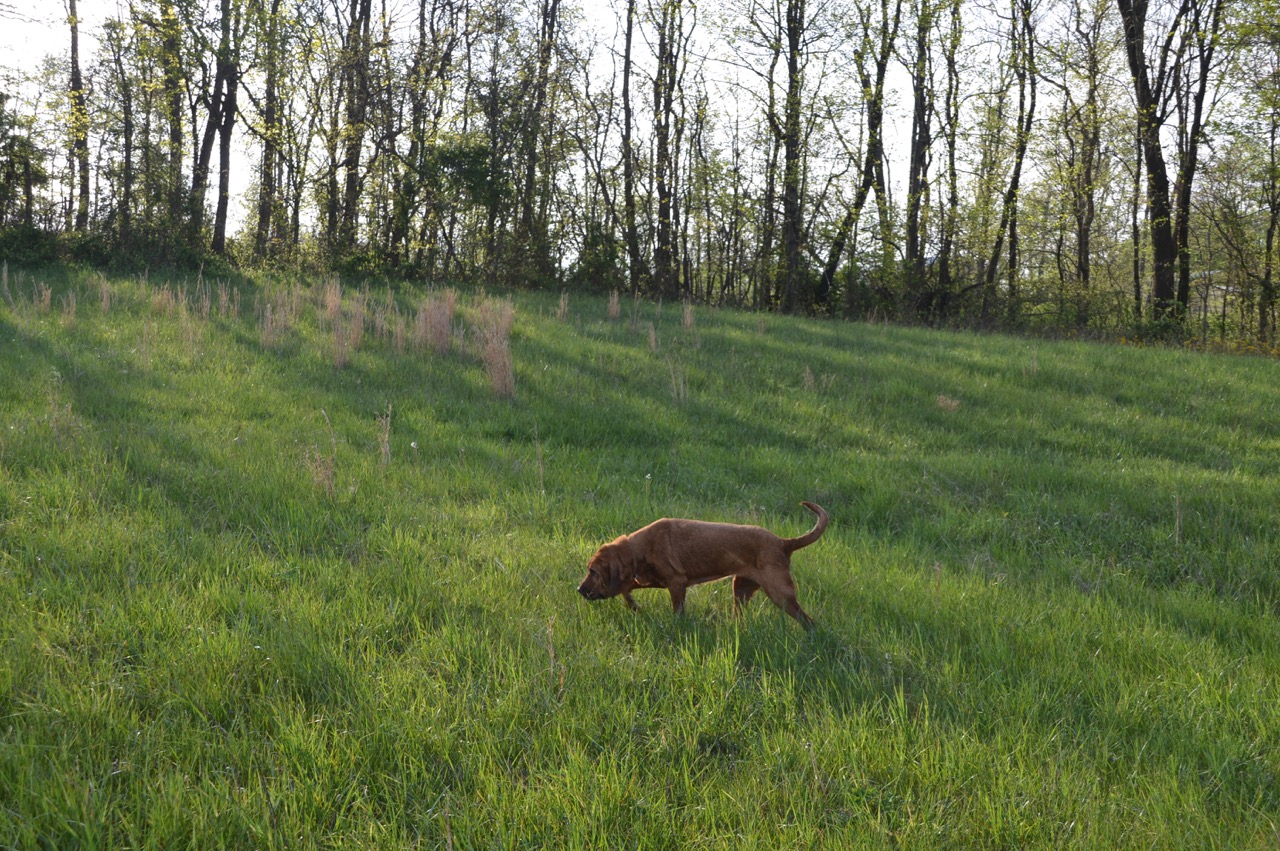 Sadie still hasn't come up for air .... her nose was on the ground for most of the walk. 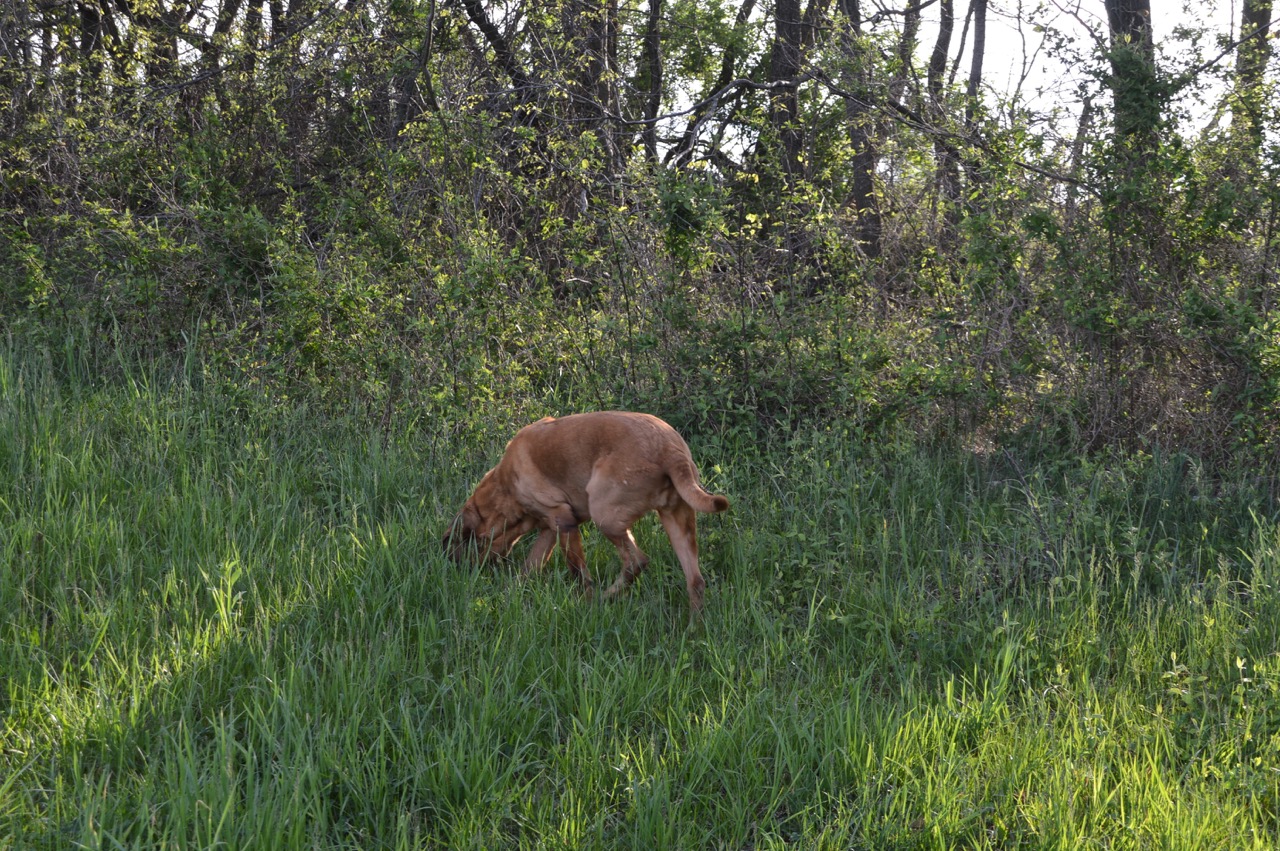 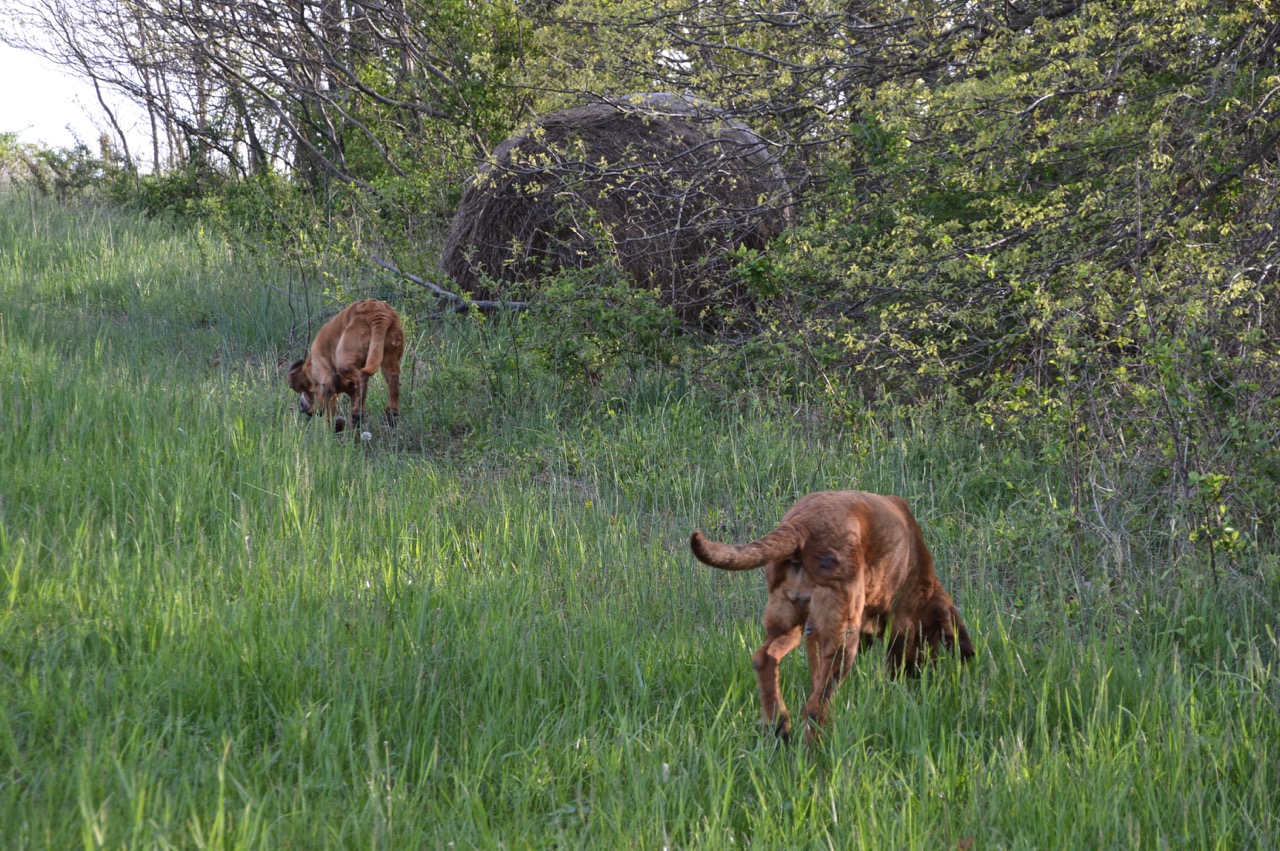 While Sadie trotted out in front of us on some kind of scent ... Stella was going to take her own sweet time. 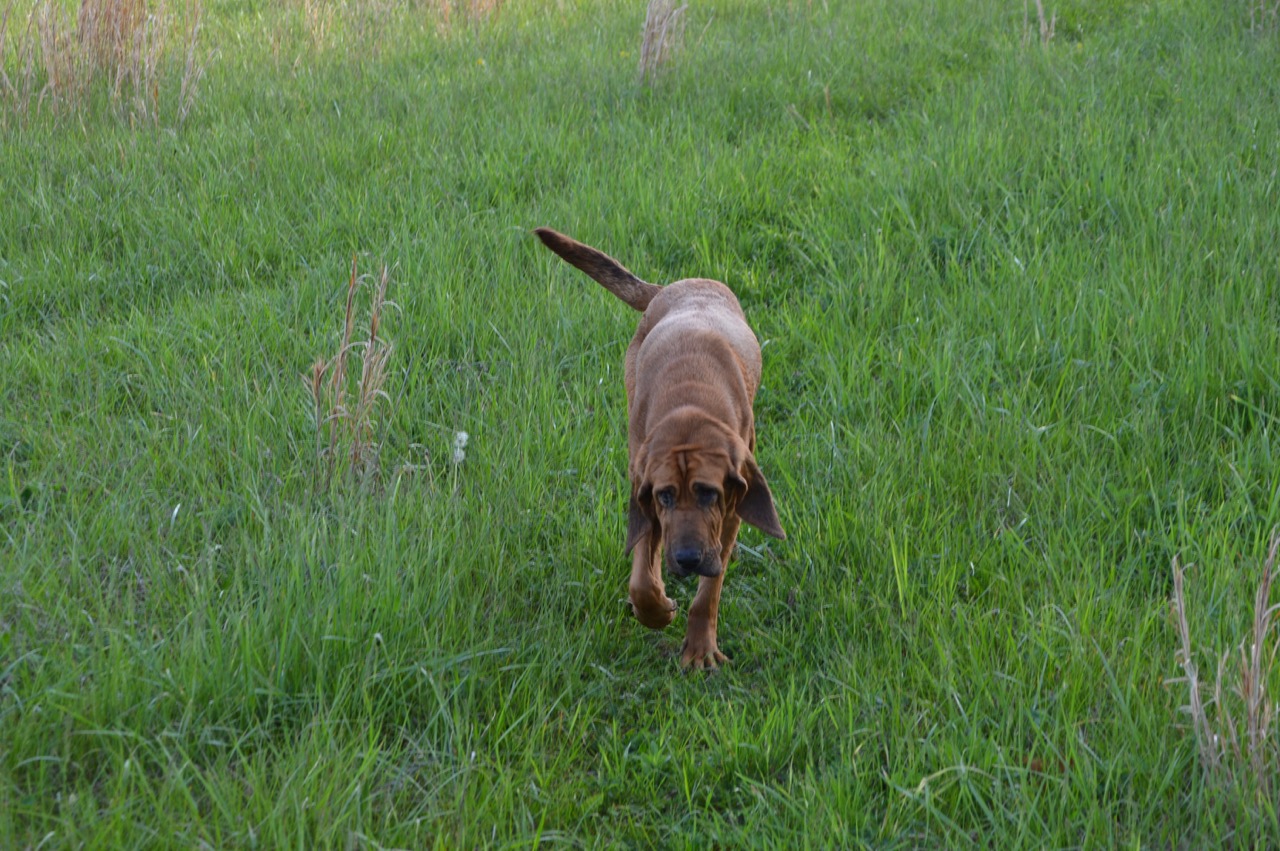 They both seem pretty interested in the cat scent. They have been ending their walks lately by walking together and slightly behind me all the way to the yard. Of course that will change in a week or two since Stella never keeps any kind of walking routine. 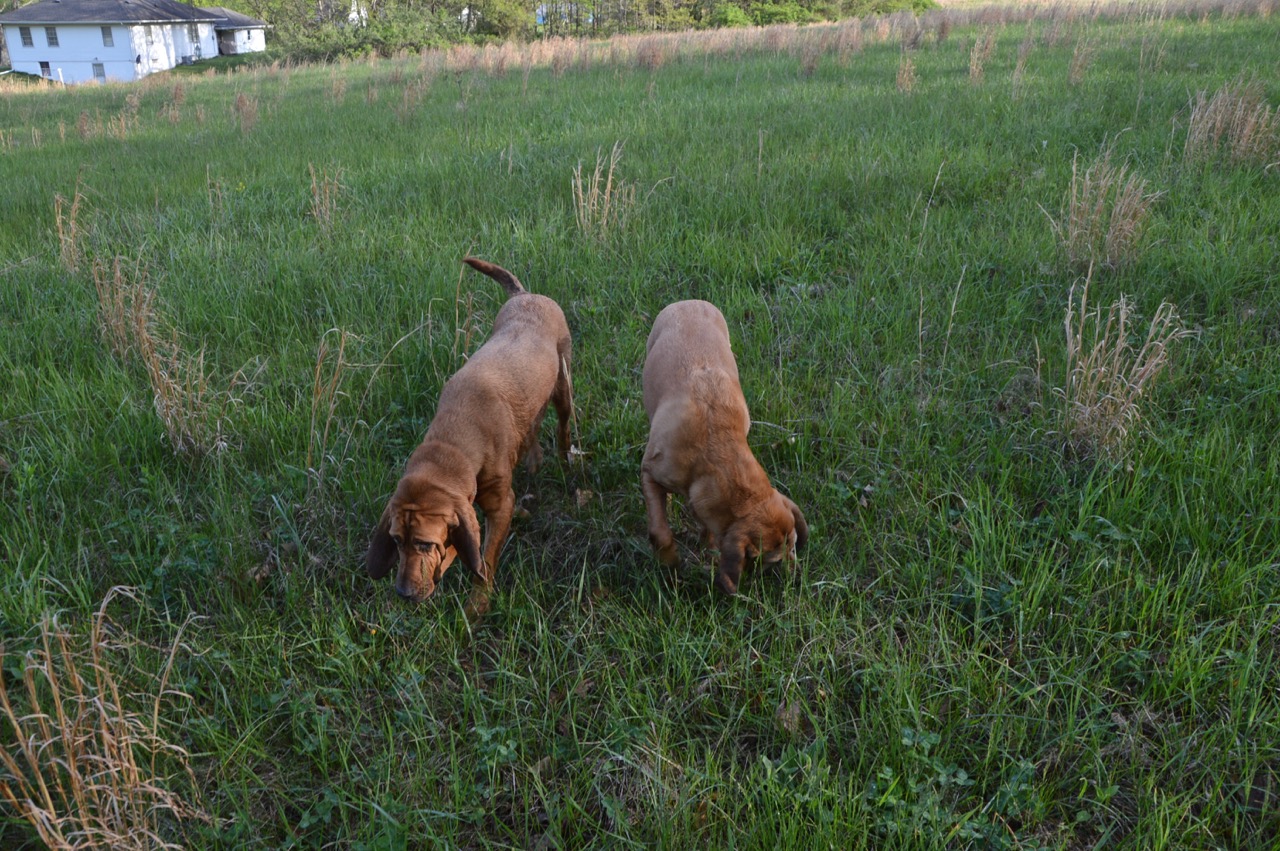 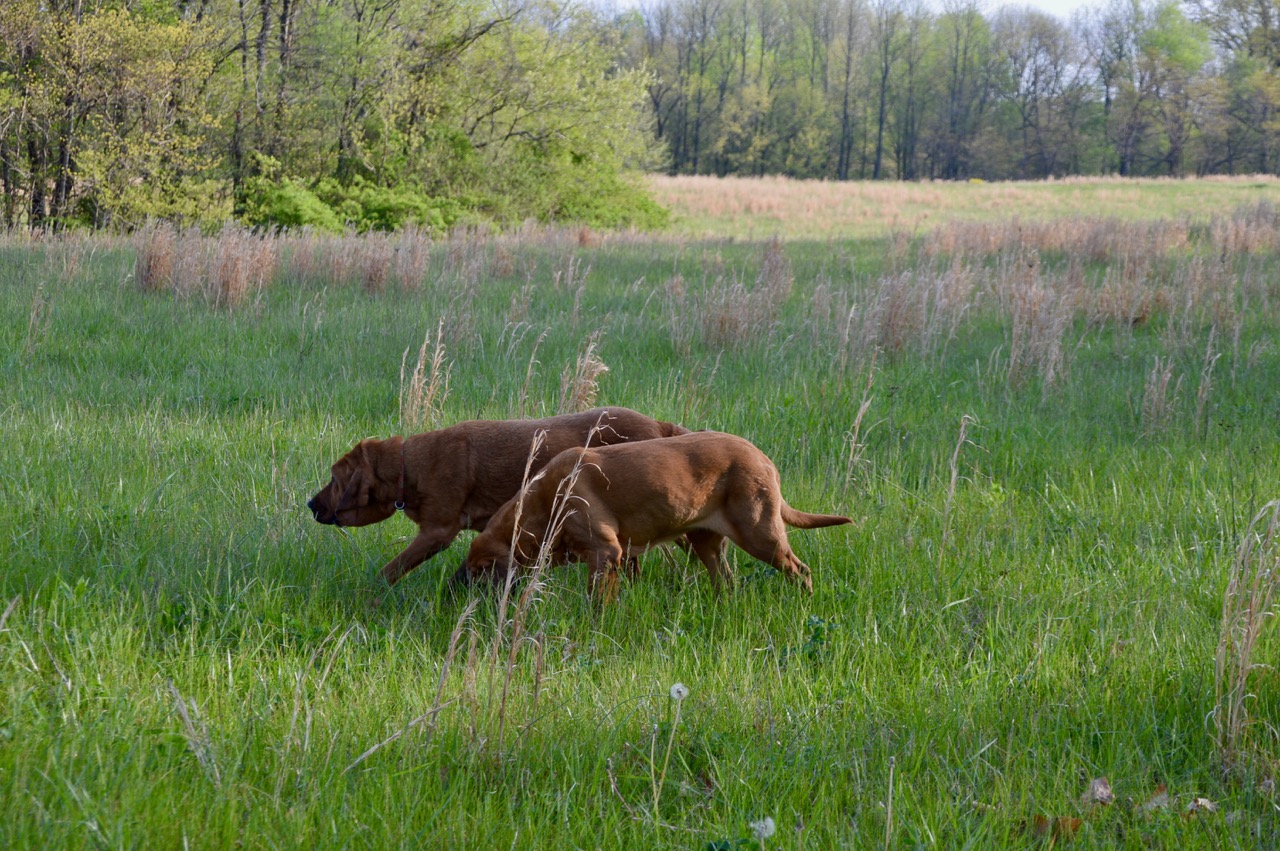 I am not sure how many of you caught the shows the other night on the National Geographic channel with Katie Couric but both shows I watched were very interesting and informing. If everyone in the country watched nothing else but those two shows I think a lot of problems would be solved. The shows were about Immigration and Smart Phone Technology.

Stella is begging for lunch right now so I cannot stay long and have a lost my train of thought. I had some other stuff I wanted to write about but it has slipped away into that dark hole of my mind. One of Katie's shows talked about memory loss ... it made me wonder if all the hours on my computer the past 23 years is my problem or is it because I am getting older. Of course the concussions I've had in the past probably doesn't help.

I am glad to see that two local Farmers Markets are opening soon for this year. There is nothing better than fresh produce, fresh meats and fresh eggs. I can't remember the last time I bought a tomato at a grocery store that had any taste to it. Yes, I have the room to grow all of this myself with my own garden, but for me personally it's easier to let the experts grow what they do and let me buy it when it's ready.

It 'feels' like rain is on the way but the radar is clear and only a 30% chance this afternoon. That is one thing that makes living in 'the tropics' of Southern Indiana so nice ... the weather is constantly changing except for those 30 days last winter.

All is good in 'the tropics' of Southern Indiana ... have a nice weekend.
at May 04, 2018
Email ThisBlogThis!Share to TwitterShare to FacebookShare to Pinterest
Labels: Azaleas, Bird Nest, Farmers, Ford, Friday Morning Walk, Ladybug