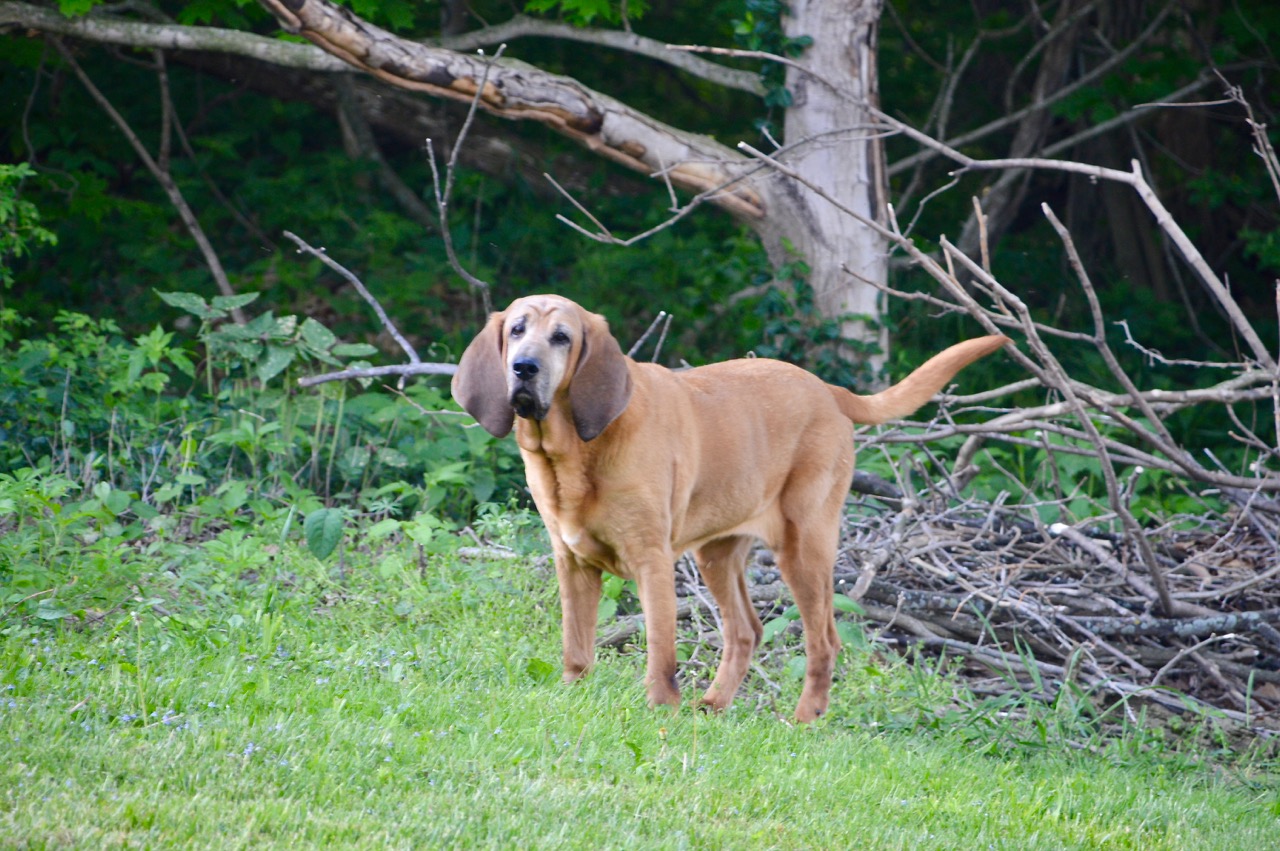 The air conditioning was turned on last yesterday afternoon as all three hounds started panting with their tongues hanging out of their mouths ... inside the house. That's the official look to turn on the AC for another summer of high temps and high humidity. Who's complaining? Not I, I love hot muggy weather and will take this over those 7° days just a few months ago. 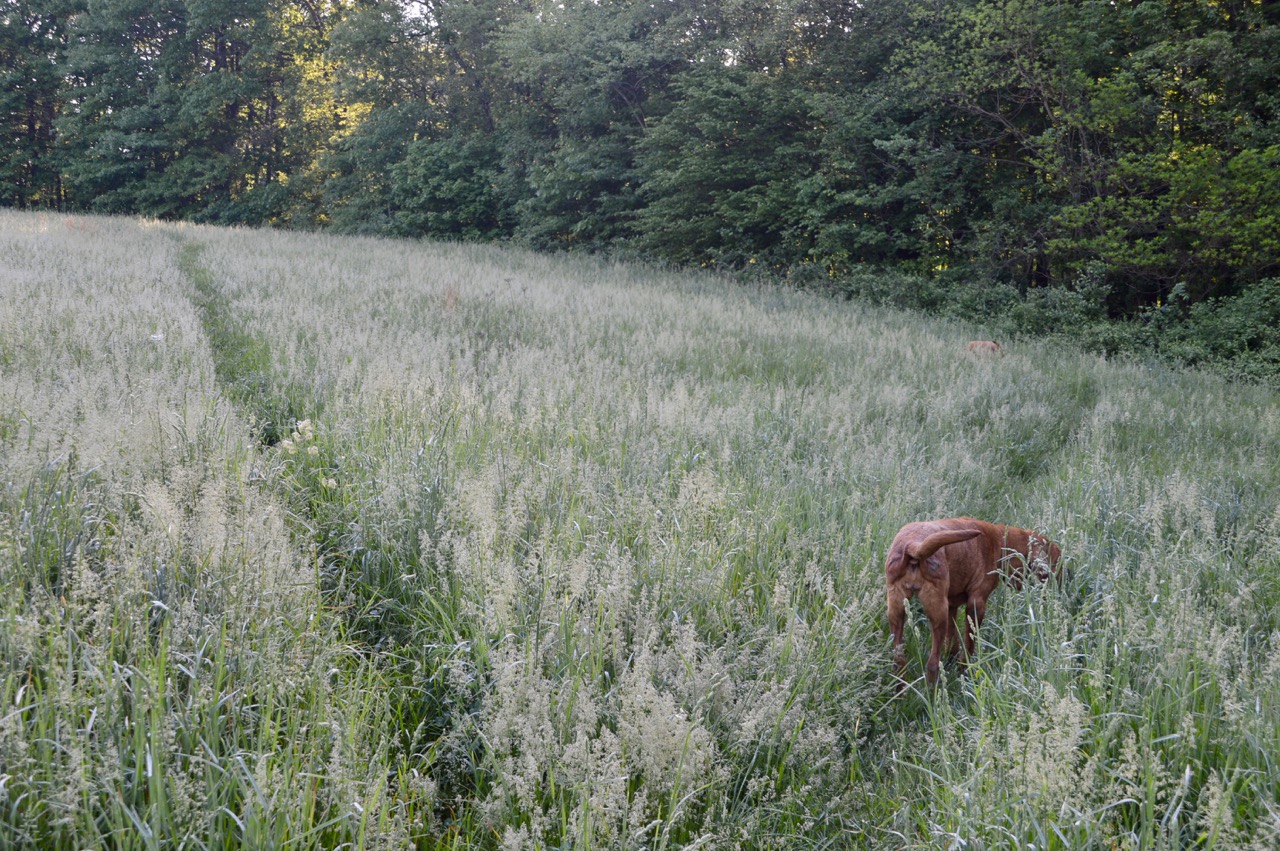 Again the field looked like it had grown another 6" overnight, but this portion of the field is always the tallest of all 7 acres. All the underground water flows this direction and it has a lot of afternoon sunshine. At least we could still see which way to go. 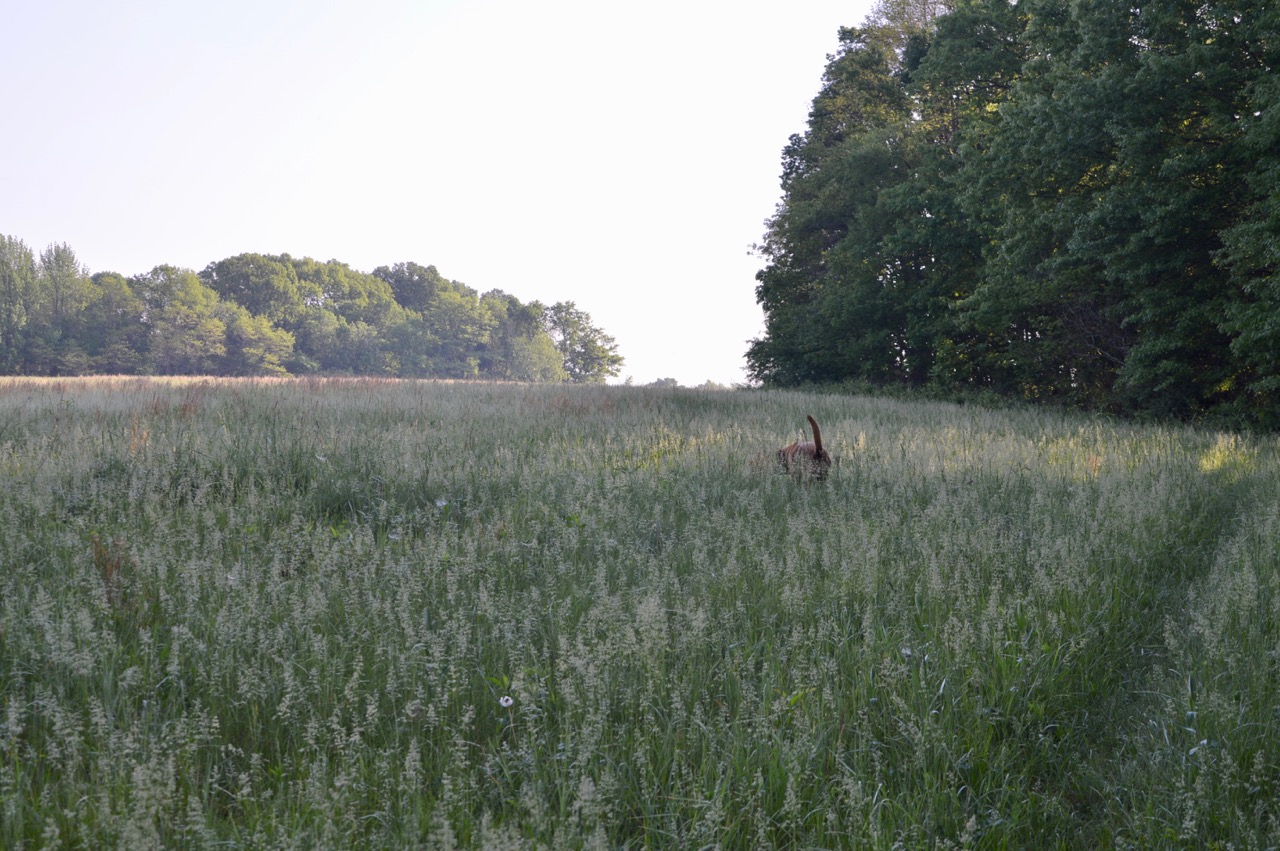 While Sadie charged out in front, I was reminded that yesterday Stella tried her best to take off to the north woods. It got to the point of no return as I watched her and listened to her ignore my calls. I had to take off sprinting to catch her. She wasn't running but had her head down and was walking at a fast pace, almost past the 2nd house north of us. 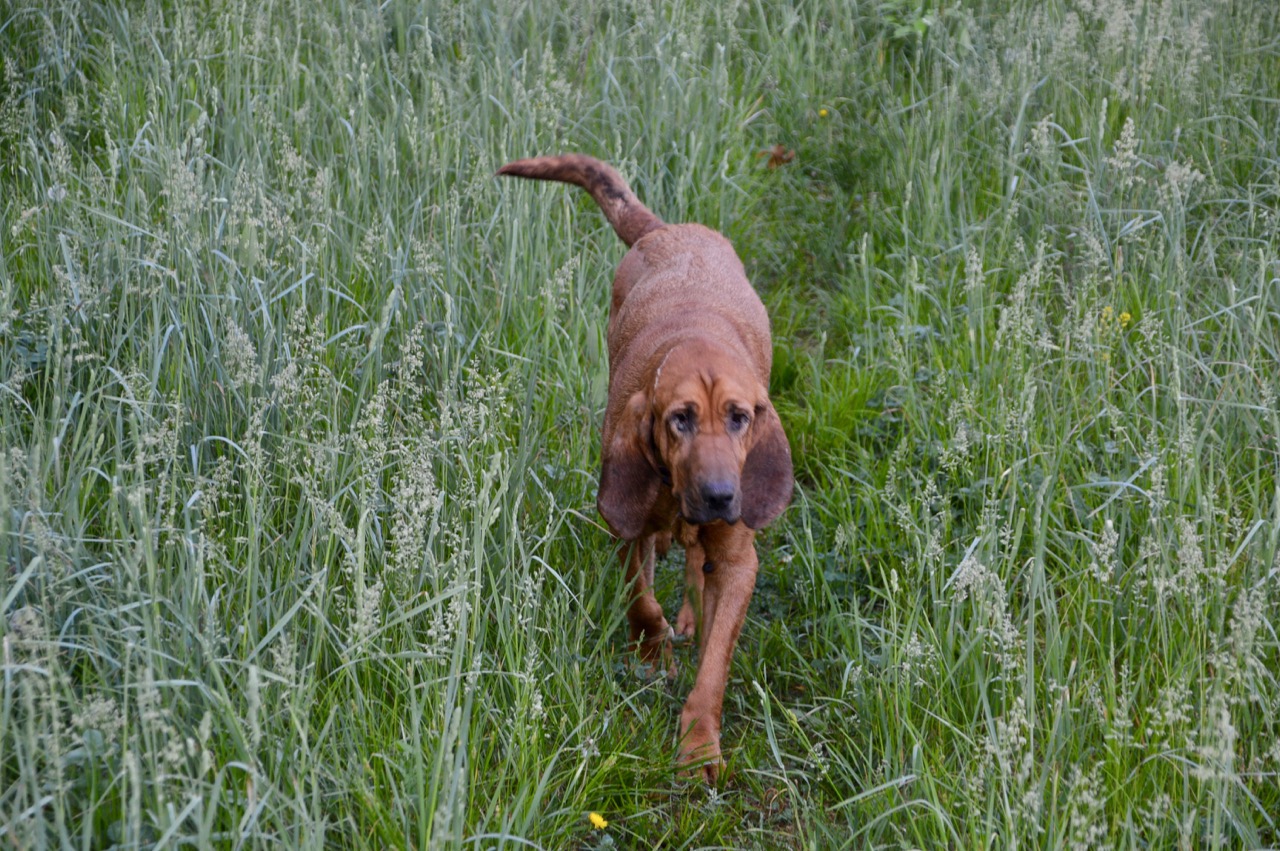 So today the focus was to keep her walking with Sadie and I ... but it was hotter than normal this morning. She slowed to her afternoon pace which is almost like me walking in slow motion, yet I wasn't going to let her fake me out today with that ... then attempting to escape.

Do you notice anything different in the picture below? 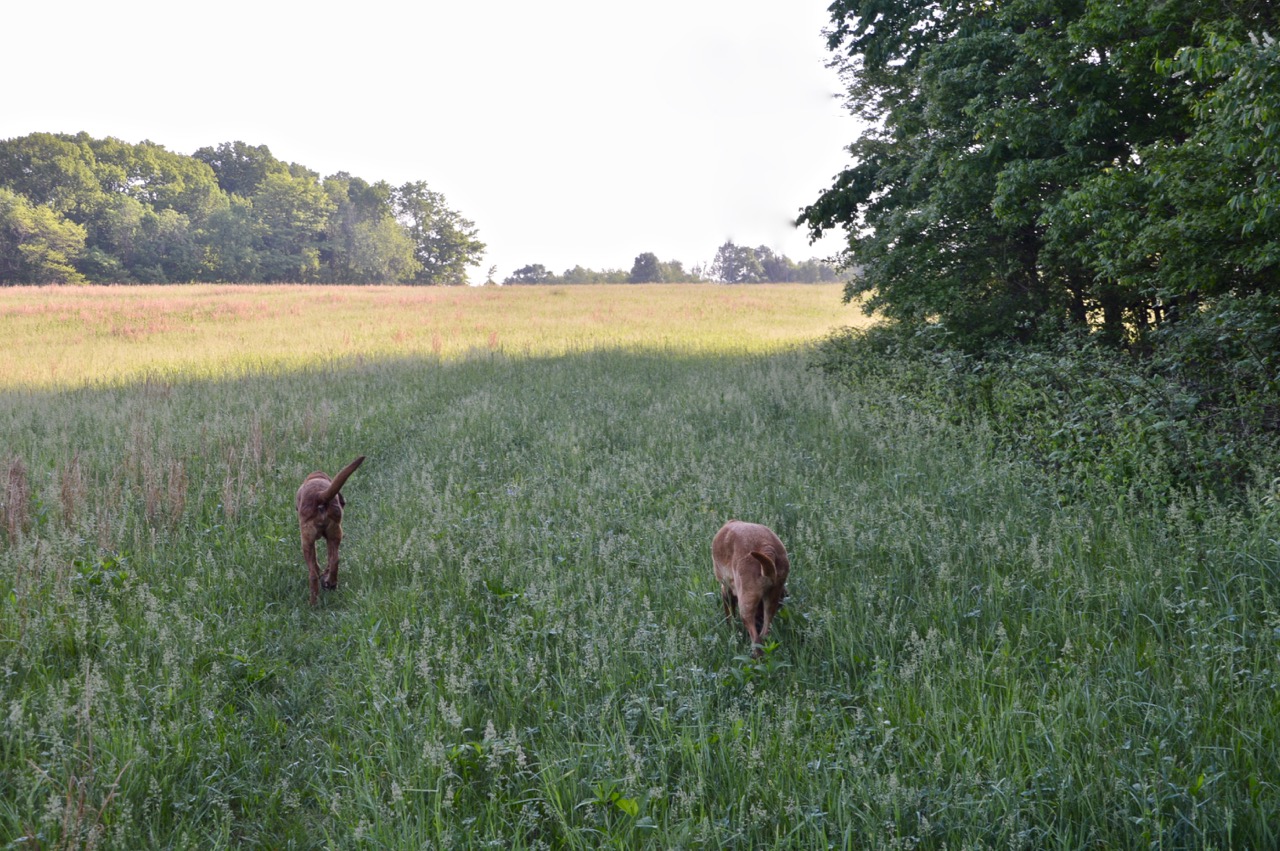 I did not see any beaten down grass, nor any kind of path but something just barely inside the brush had Sadie and Stella's attention. A lot of verbal commands were needed to get them to move. It was hot, muggy, not even 9am and the gnats were out in force. 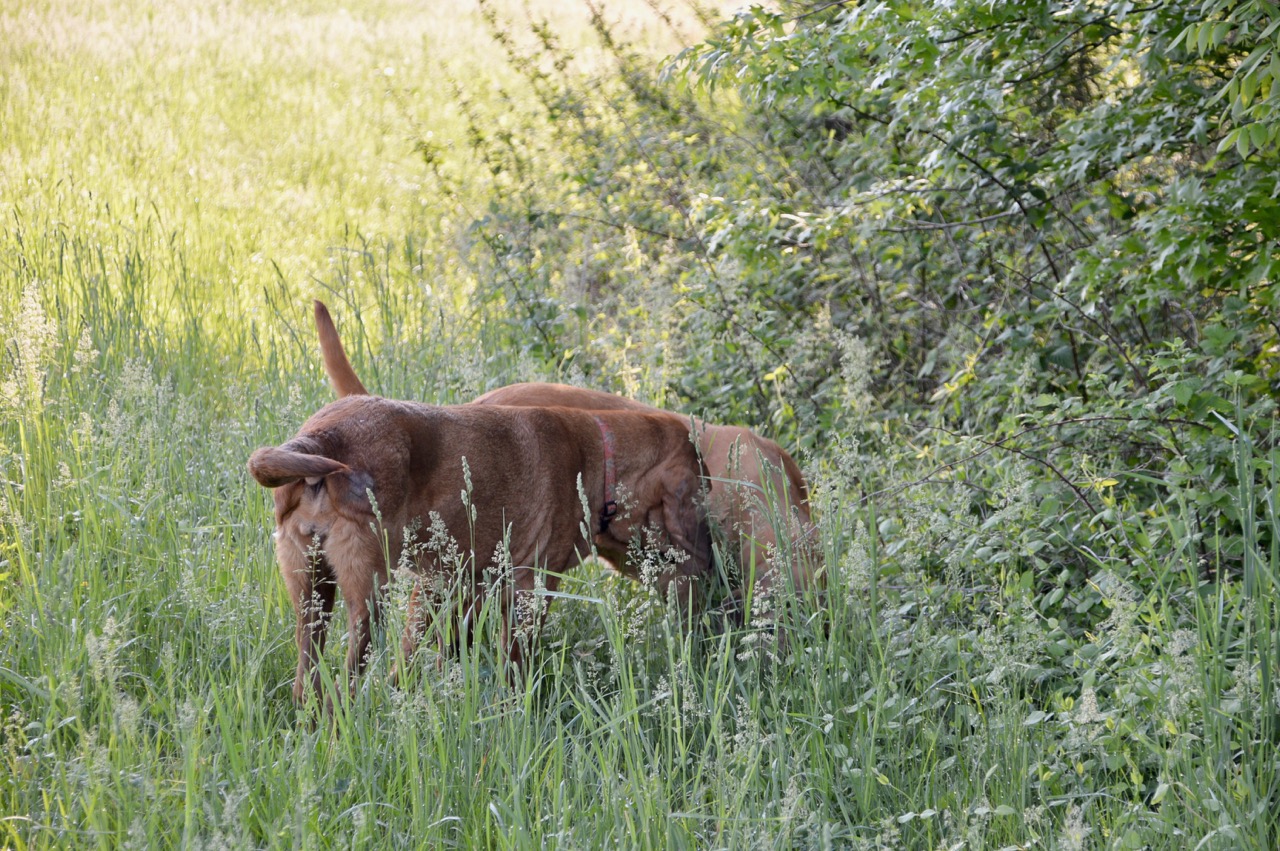 Not even halfway through the walk my hiking boots are completely saturated. 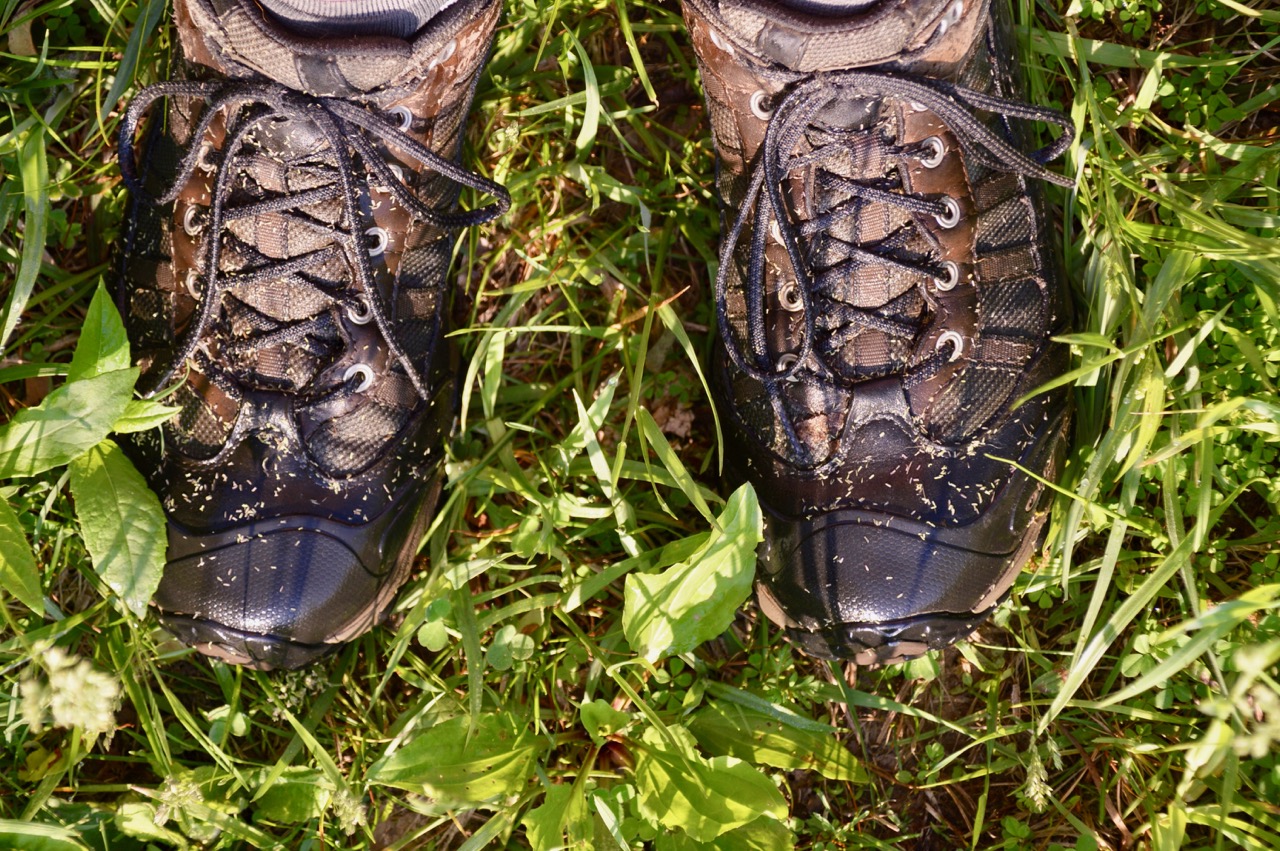 I was curious enough to check last year's blog posts to see when we turned on the air conditioning. That is one thing that is good about a blog, it makes it easy to find answers for questions concerning the house, the hounds, the vehicles, weather or myself. It wasn't until the 2nd of June that the AC was turned on and a week later where it seemed to be running full time.

Why does Stella cry like she is in pain ... when I sneeze ?? 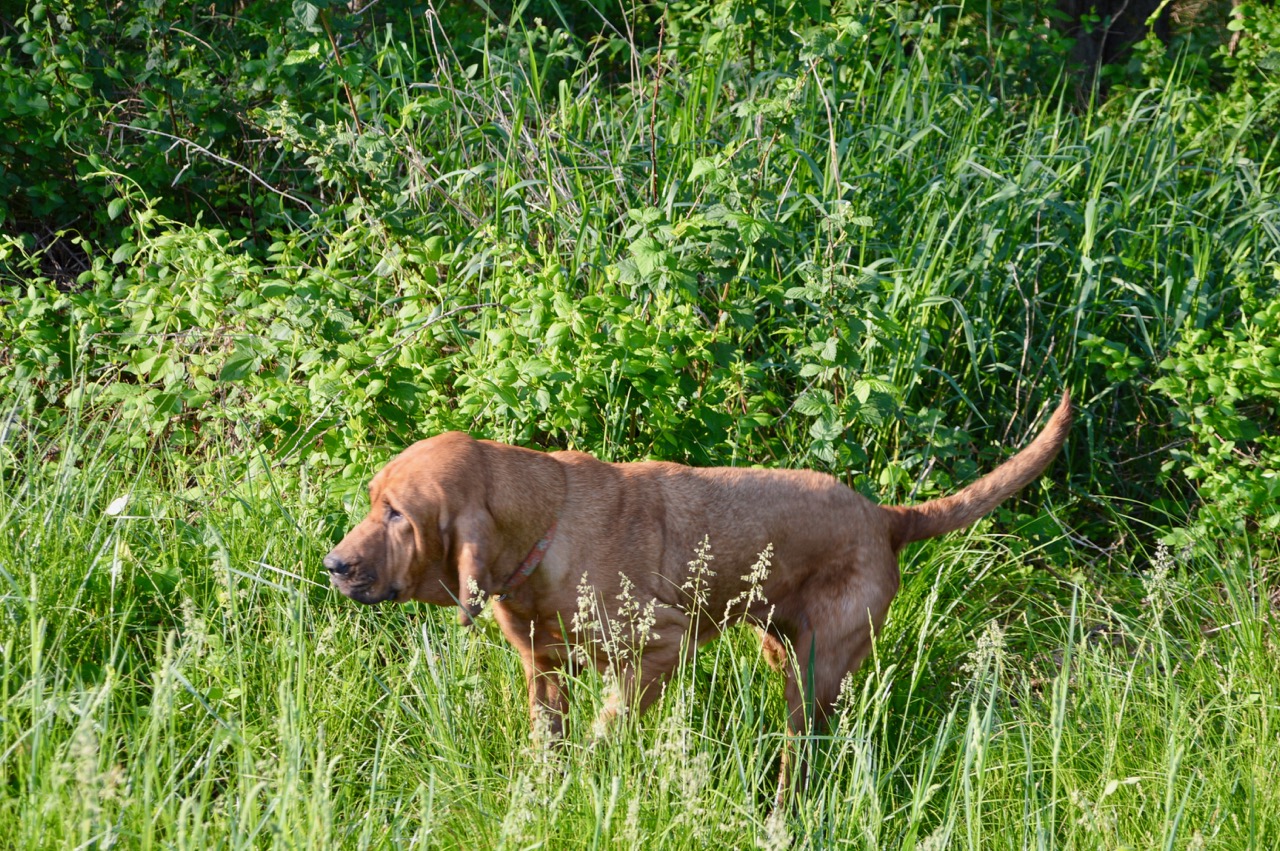 By the time I turned around Sadie was headed into the brush and Stella was about to follow her. What was leading them out of bounds?? 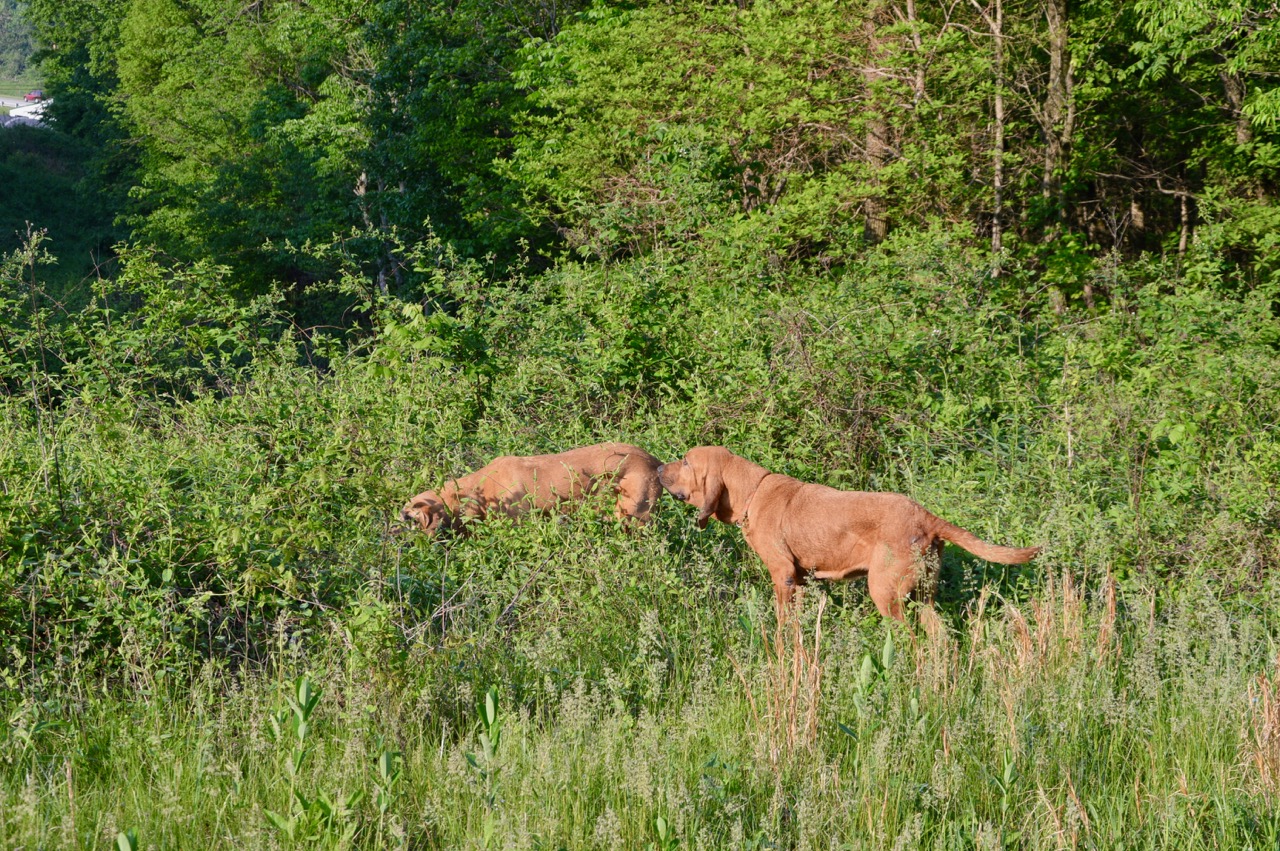 Calling their names and telling them no got both of them back on the walk with each hound going their own separate ways. 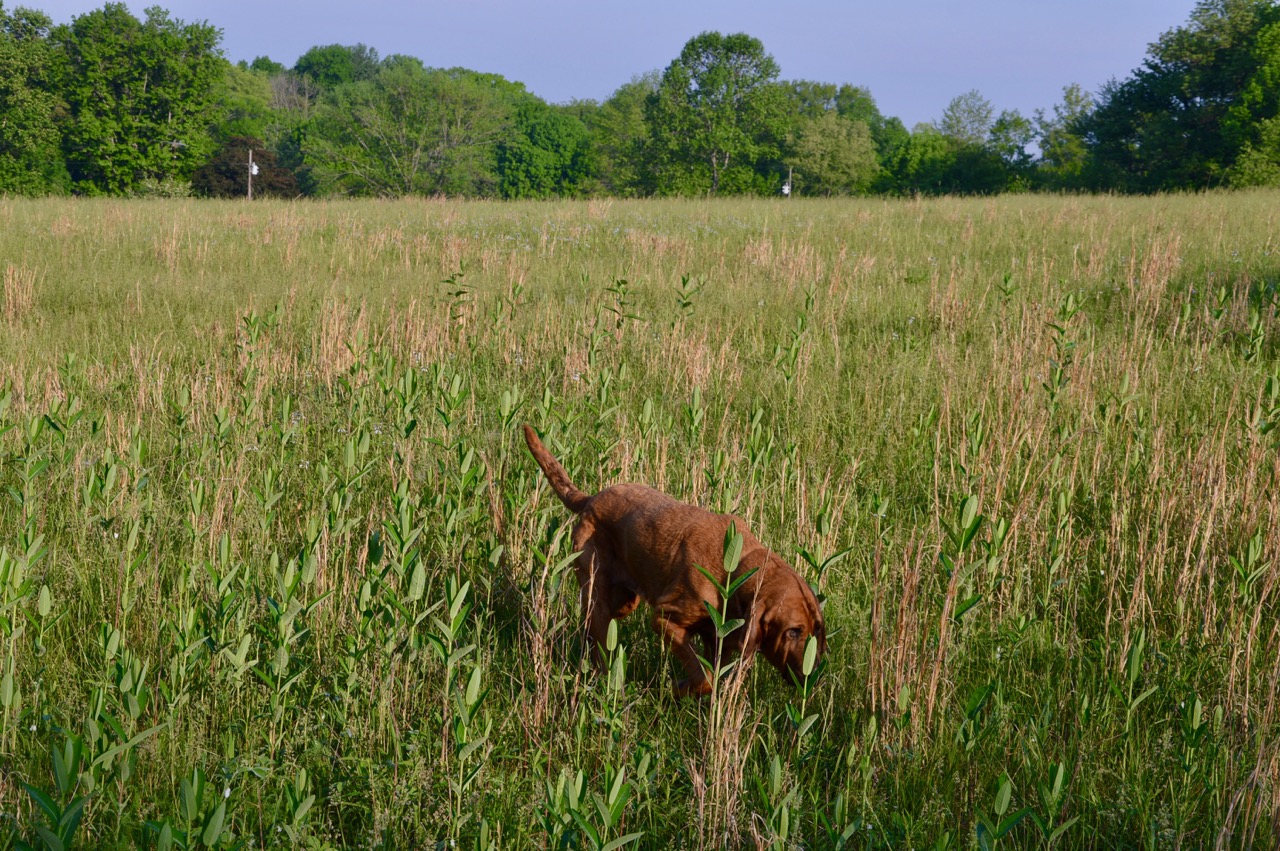 After yesterday's escape by Stella, Sadie was going to keep a close eye on her. She did this various times throughout the walk this morning, just to make sure that Stella was still in view. 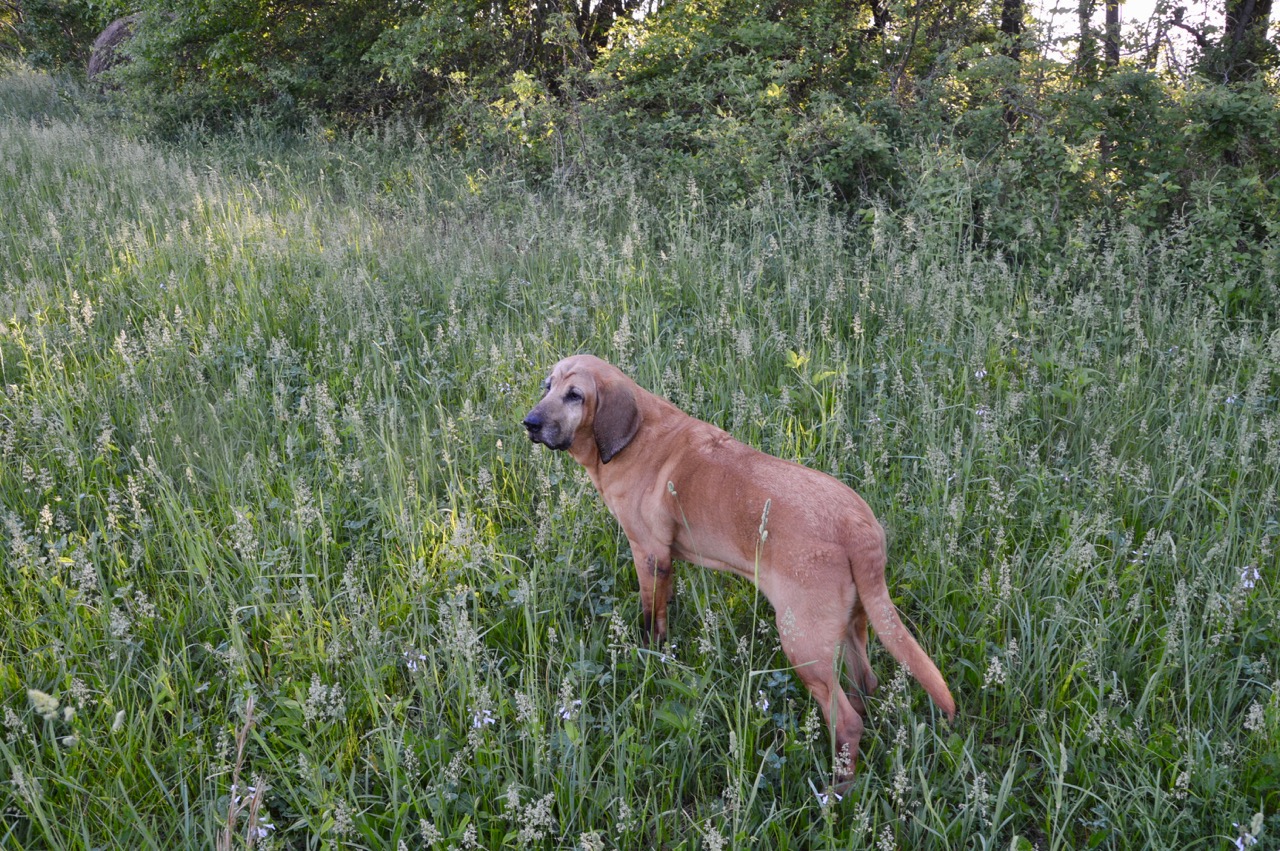 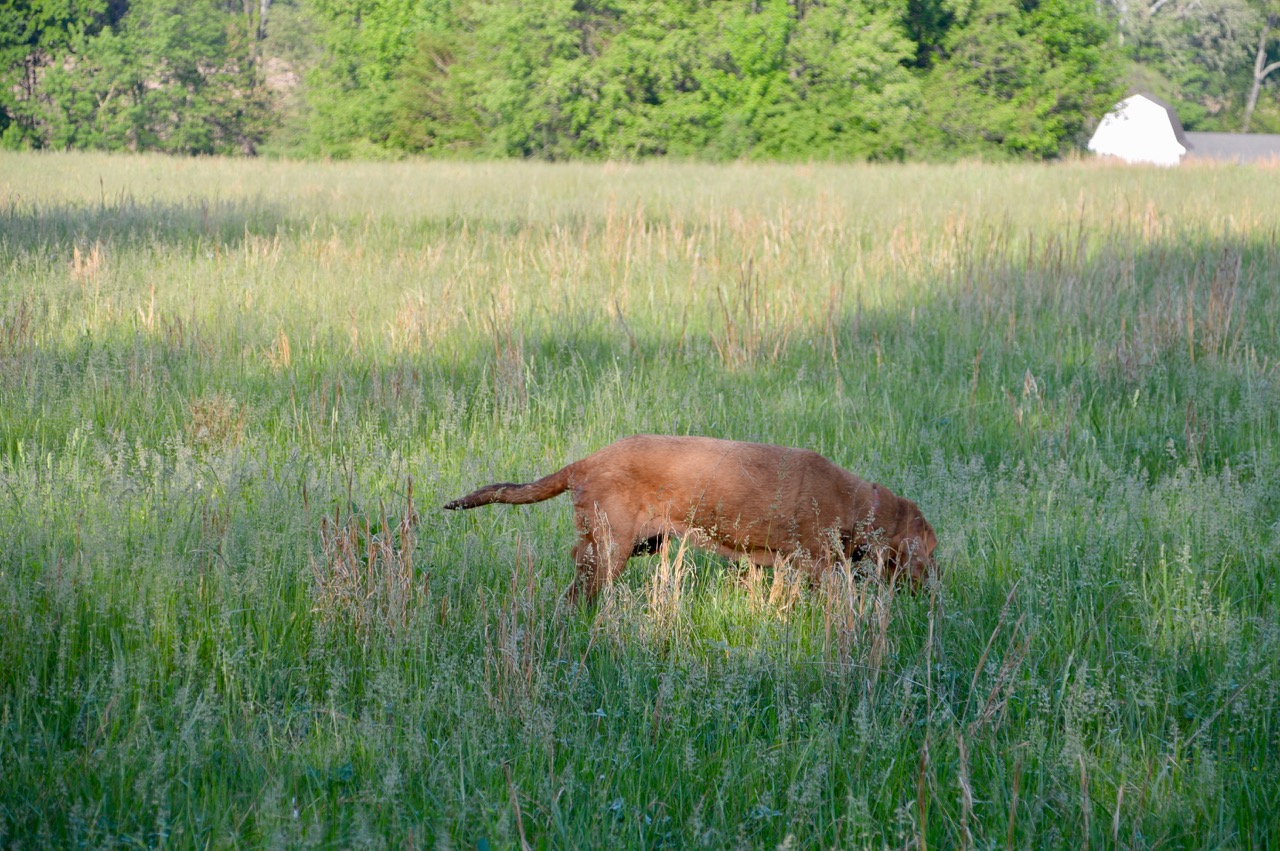 "After further review" as they like to say in NFL games ... I have decided this morning they planted corn in the back field and not soybeans like I guessed last week. 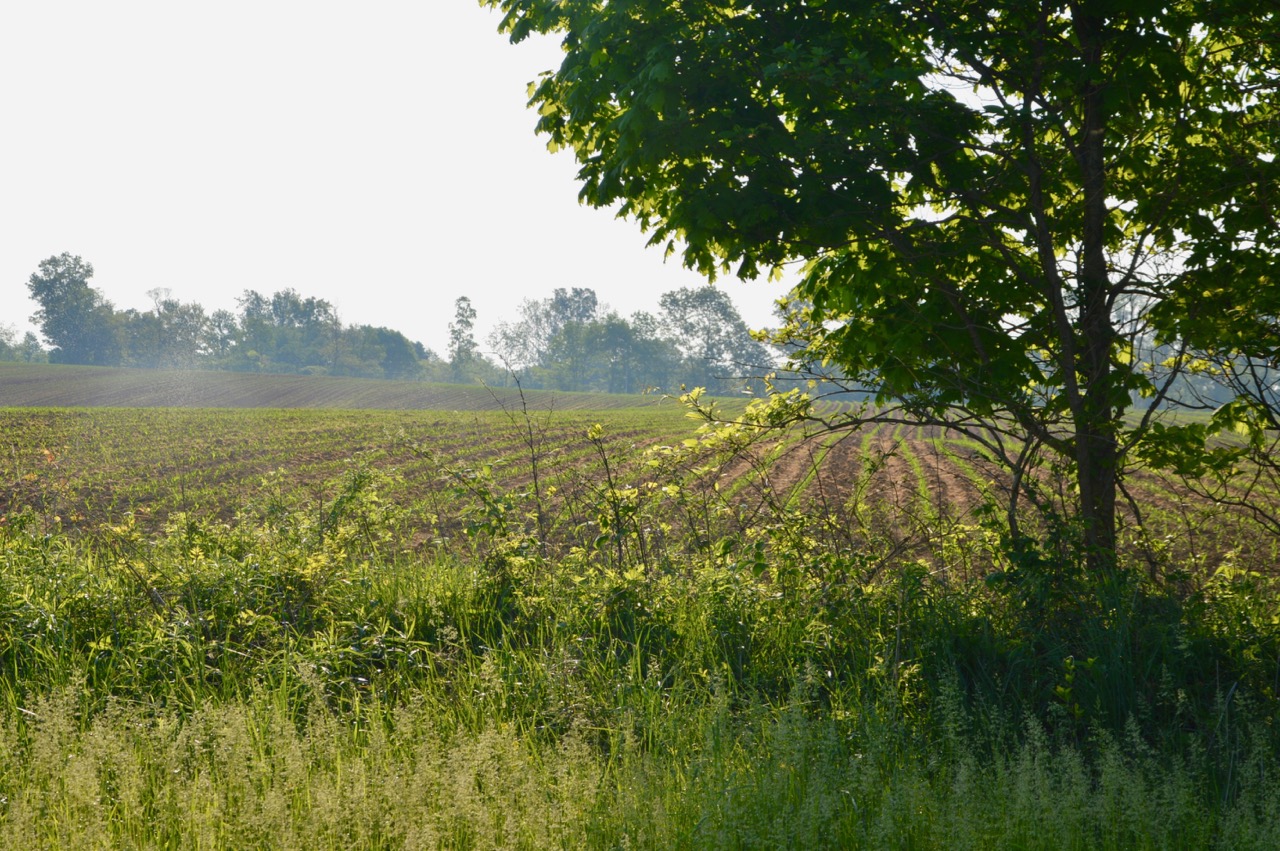 Can you feel the 'mugginess' in those photos? 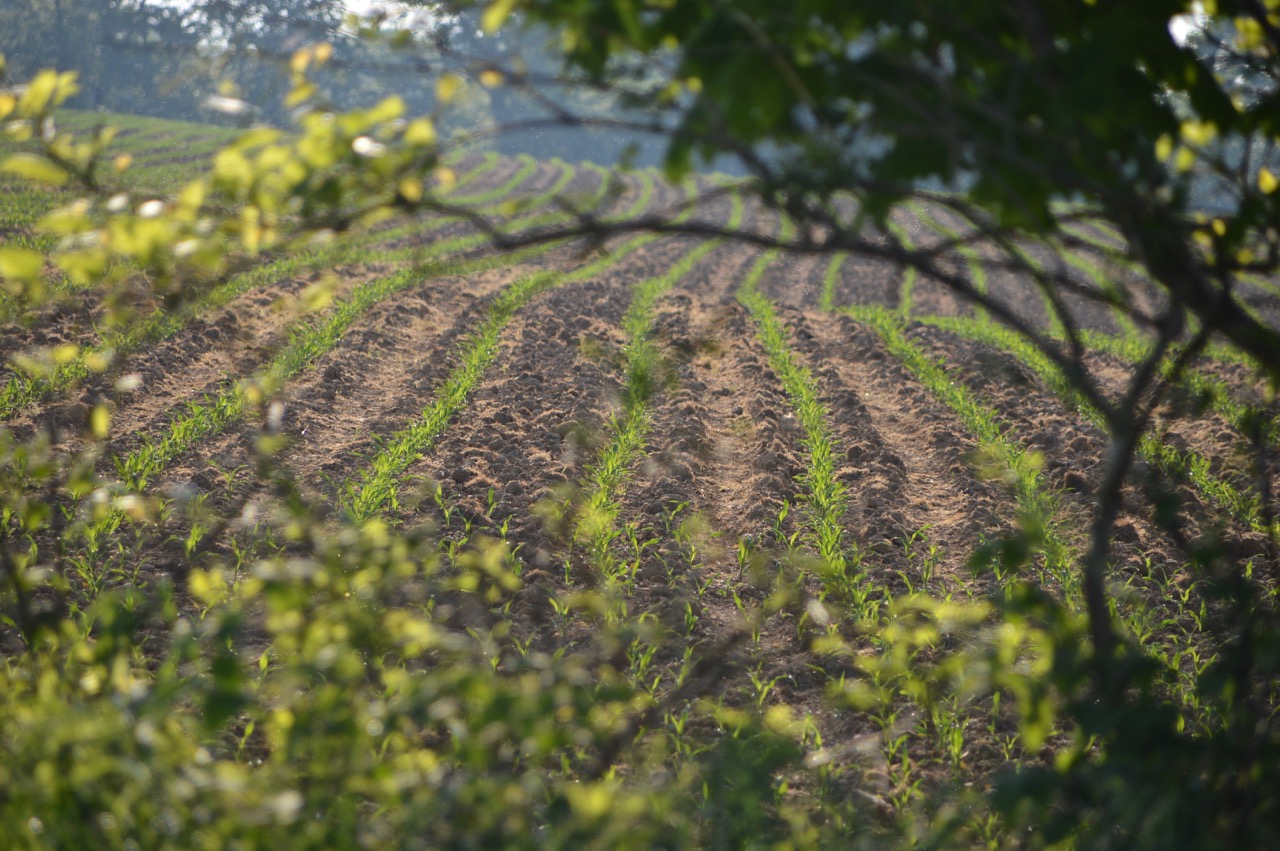 What a difference a few months makes in the weather here and the color of the fields. 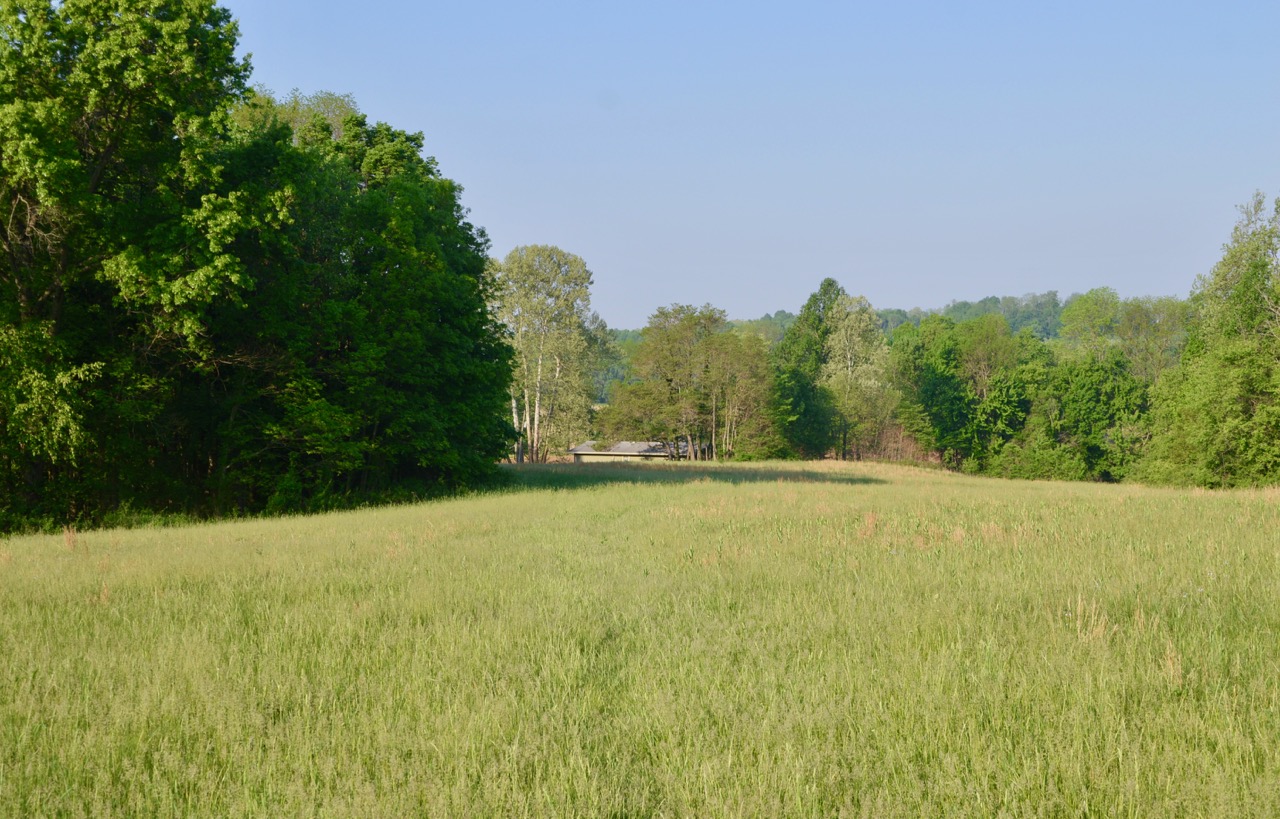 At this point in time I wasn't sure if Stella was going to make it back to the yard before noon. Each step was deliberate, no signs of being in a rush and no signs of veering off course. Would she make it home by noon? 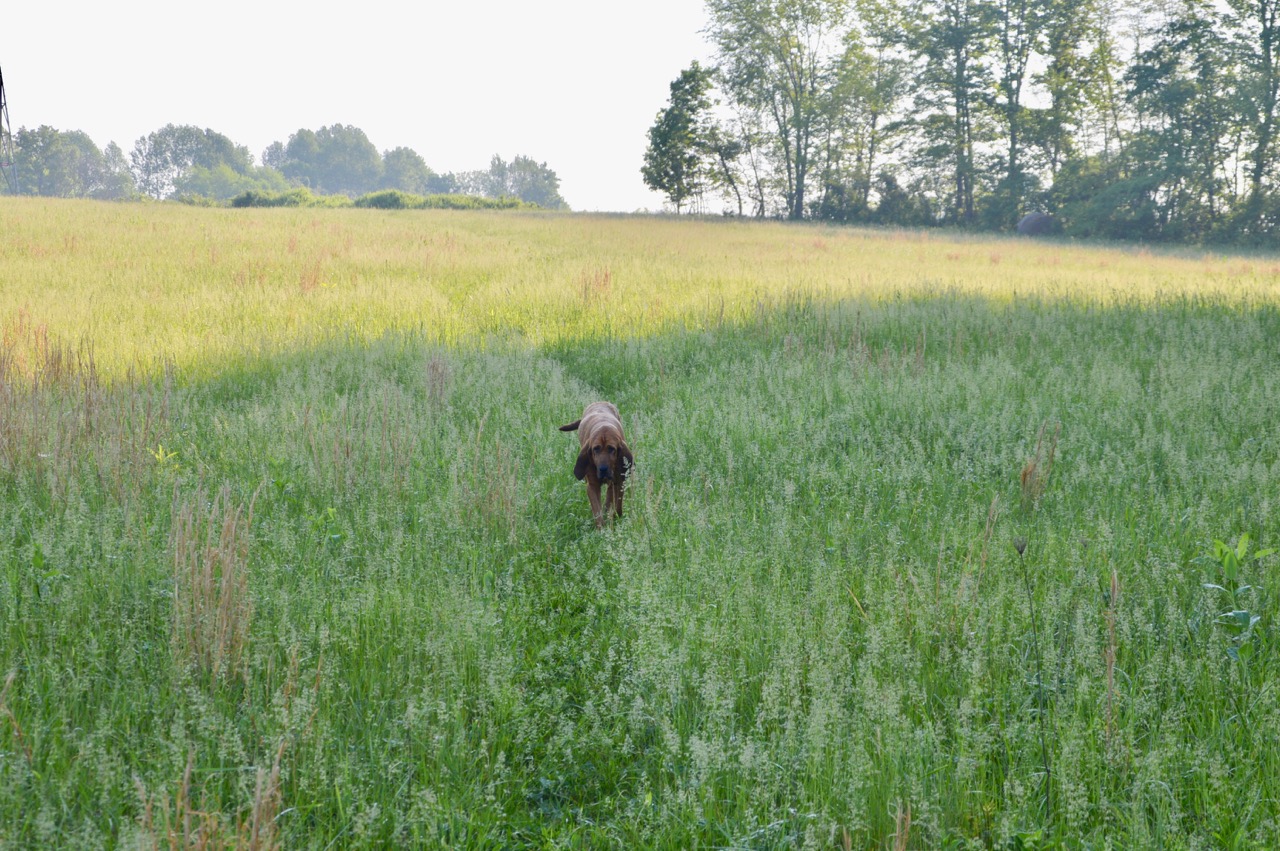 She made it to the yard about 5 minutes later but still at the same pace. She can tell it's hot and in that case she does nothing fast or normal ... everything is slower for her. 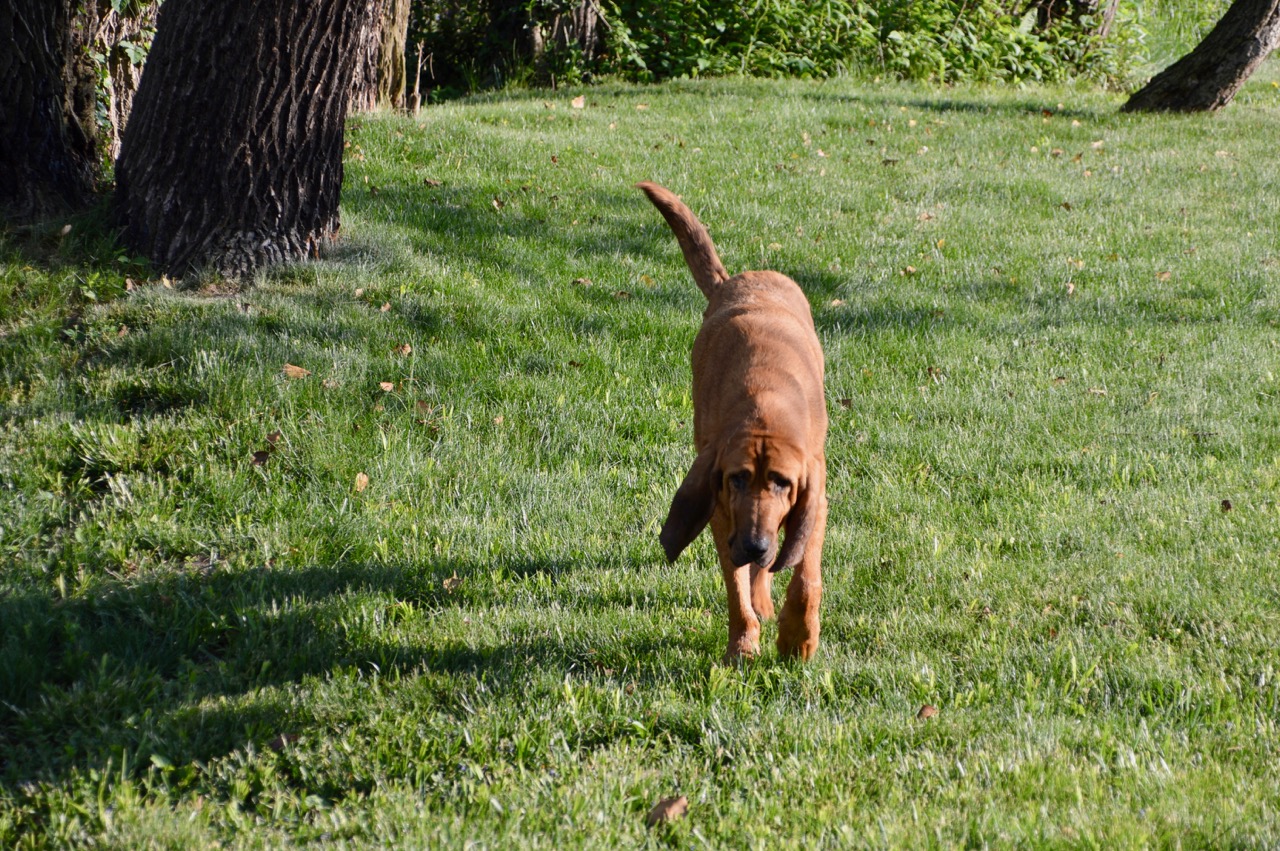 While my mind was daydreaming yesterday I thought that I might start blogging again at the end of the day instead of this time of morning. I know that will not change your reading habits nor is it an attempt to. It's just a warning that new posts may not happened until late afternoons or early evenings. That way I can decrease some of the morning photos, add some afternoon shots that would include Heidi and include a whole day not just the morning walk.

Just because the temperatures are above Heidi's threshold for activity does not mean she wakes up any earlier. She isn't real active and photogenic until after her lunch.

If anyone would like to live in 'the tropics' the house next door is going to be for rent. My neighbor of one year, that works in the Texas oil fields and stays up here a week per month, moved out last week. I knew something was going one when the satellite installers were taking his satellite dish down without replacing it. I also saw some loaded pickup trucks pulling away from the house.

Not sure when it will rain again after a forecast of a 'wetter than normal' summer ... and I don't know if my last place Reds will ever lose again since they are on a 6 game winning streak. (Have I jinxed them?) Besides, I'm back on Facebook and even signed up for an Instagram account last night so I could find some old bloggers that moved to Instagram. I can also follow that 'vanlife' group.

Does it really matter if you try to hide from Google if you have used Blogger for years and have gmail as your email service, both owned by Google ... the lightbulb finally came on inside my head and I realized they already had info on me that would never disappear so back to Google Chrome I came. It uses less data than Apple's Safari does.

I may have finally found an 'in home' pet sitter ...  waiting for a reply from her.

That's about it for this morning from 'the tropics' of Southern Indiana ... air conditioning was a great invention.
at May 14, 2018
Email ThisBlogThis!Share to TwitterShare to FacebookShare to Pinterest
Labels: Google Chrome, Hay Field, Indiana Summers, Oboz Hiking Shoes, Pet Sitter, Stella's Slow Pace