Perfect Weather In The Tropics 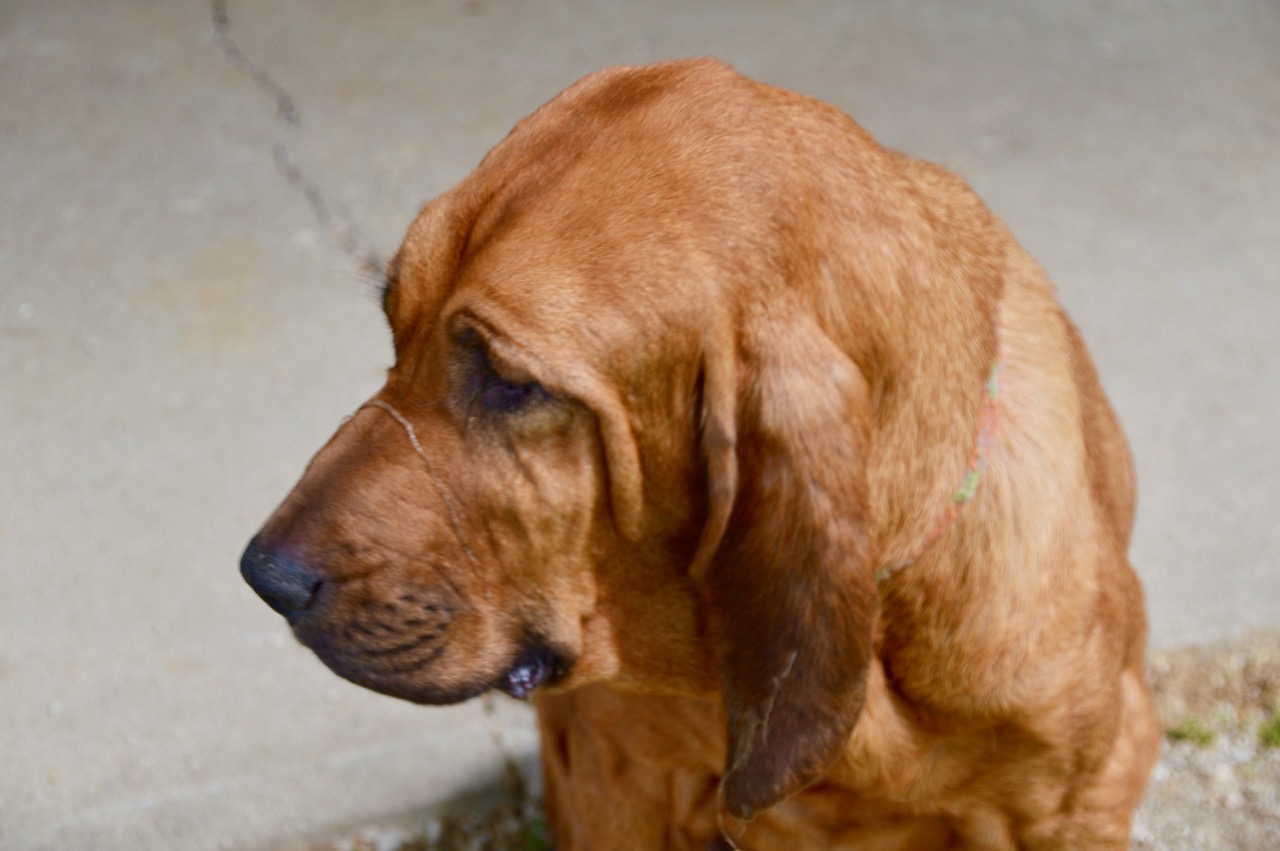 Sunday afternoon was nothing out of the ordinary with the hounds sleeping through the heat, while I watched another miserable Reds baseball game and later some good Indy500 Qualifications. It was one of those days that you have a lot of "I don't know" moments. 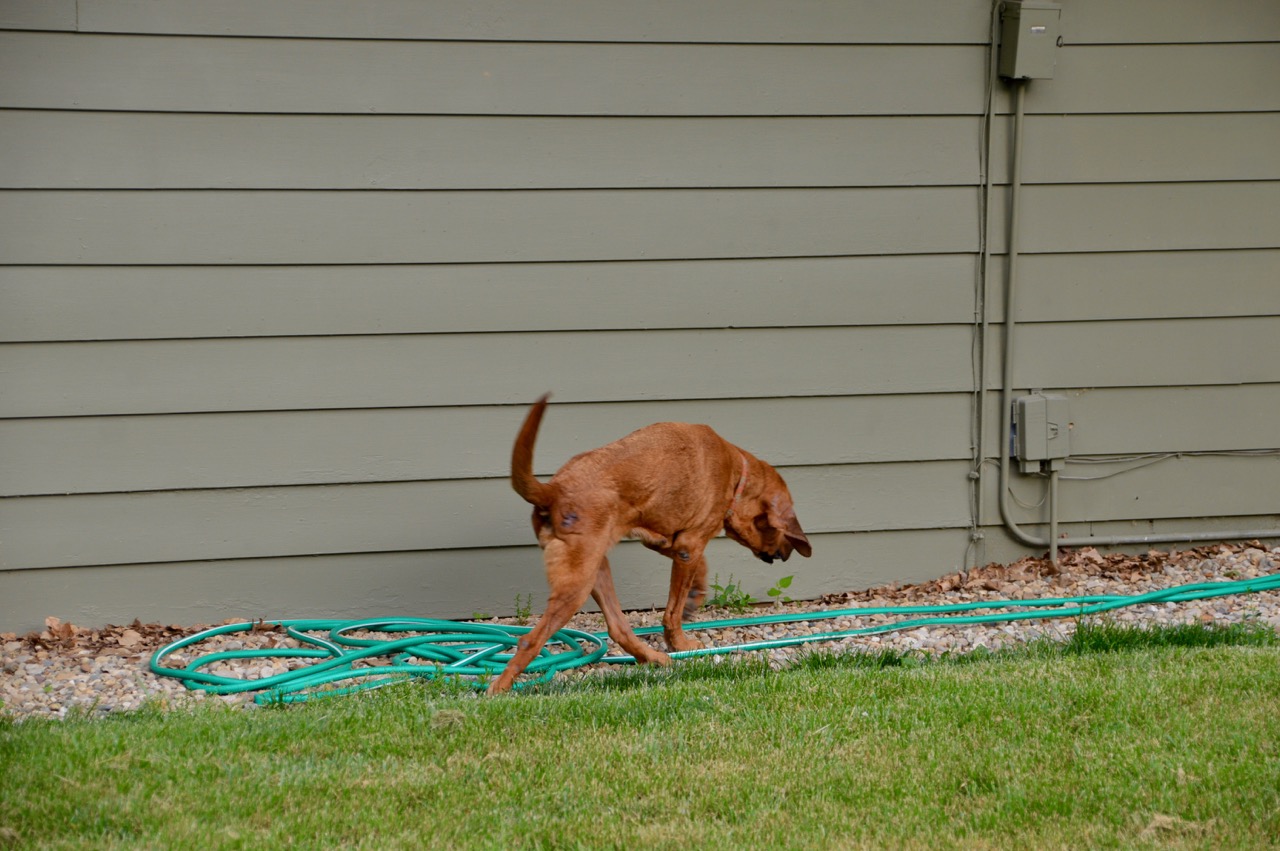 Stella started her walk this morning just as she has done the past few days. It's not a direction I like seeing her go because I know she is headed north to the woods behind the neighbors or their drainage ditch. For the 2nd morning in a row I walked over through the high grass to tell her she was going to join Sadie and I. For some reason I think about her and that highway the past two days, so I will follow my intuition and play it safe. 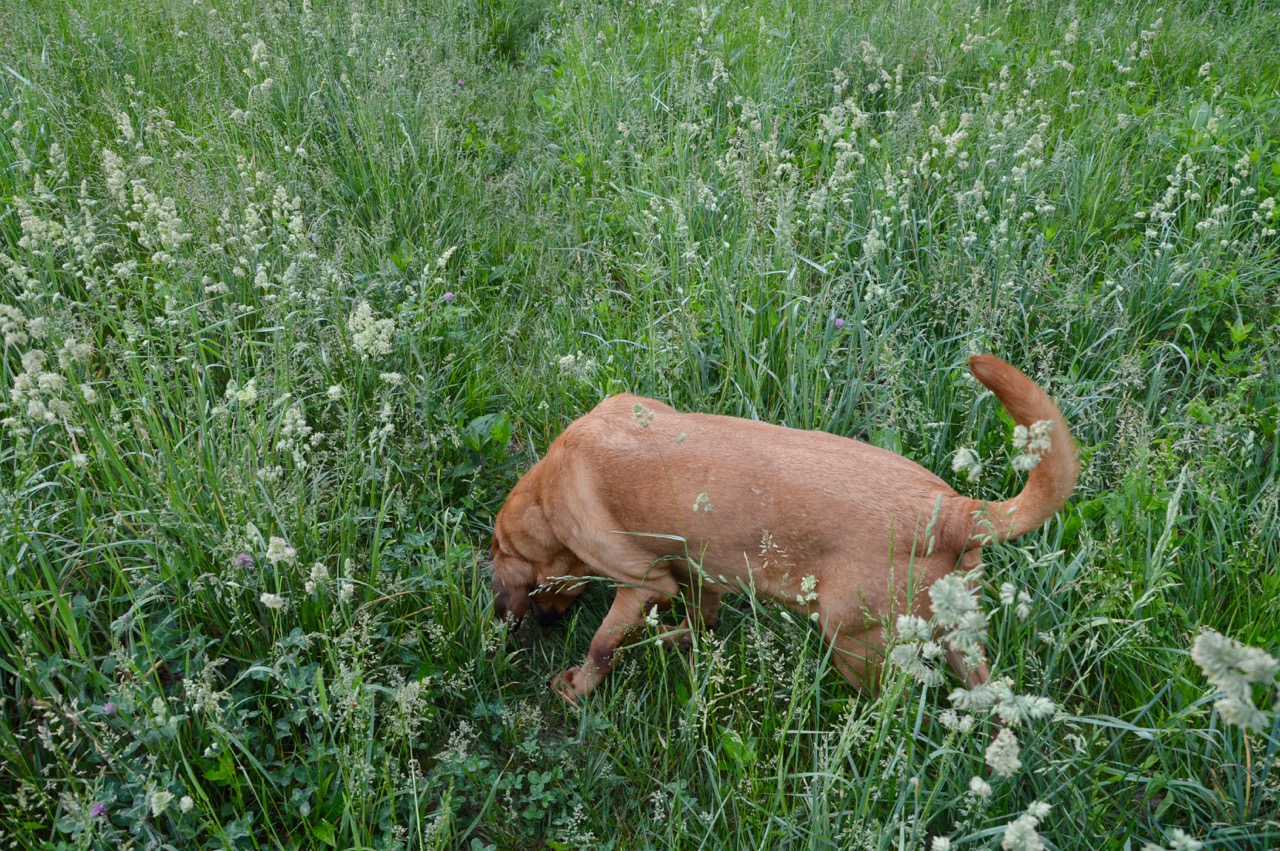 Sadie was sure something had been on our path overnight and she pressed her nose as hard as she could against the small patch of dirt. I wish I had her energy first thing ever morning. My normal two cups of coffee didn't seem to be working so I thought a walk might help speed up my metabolism. 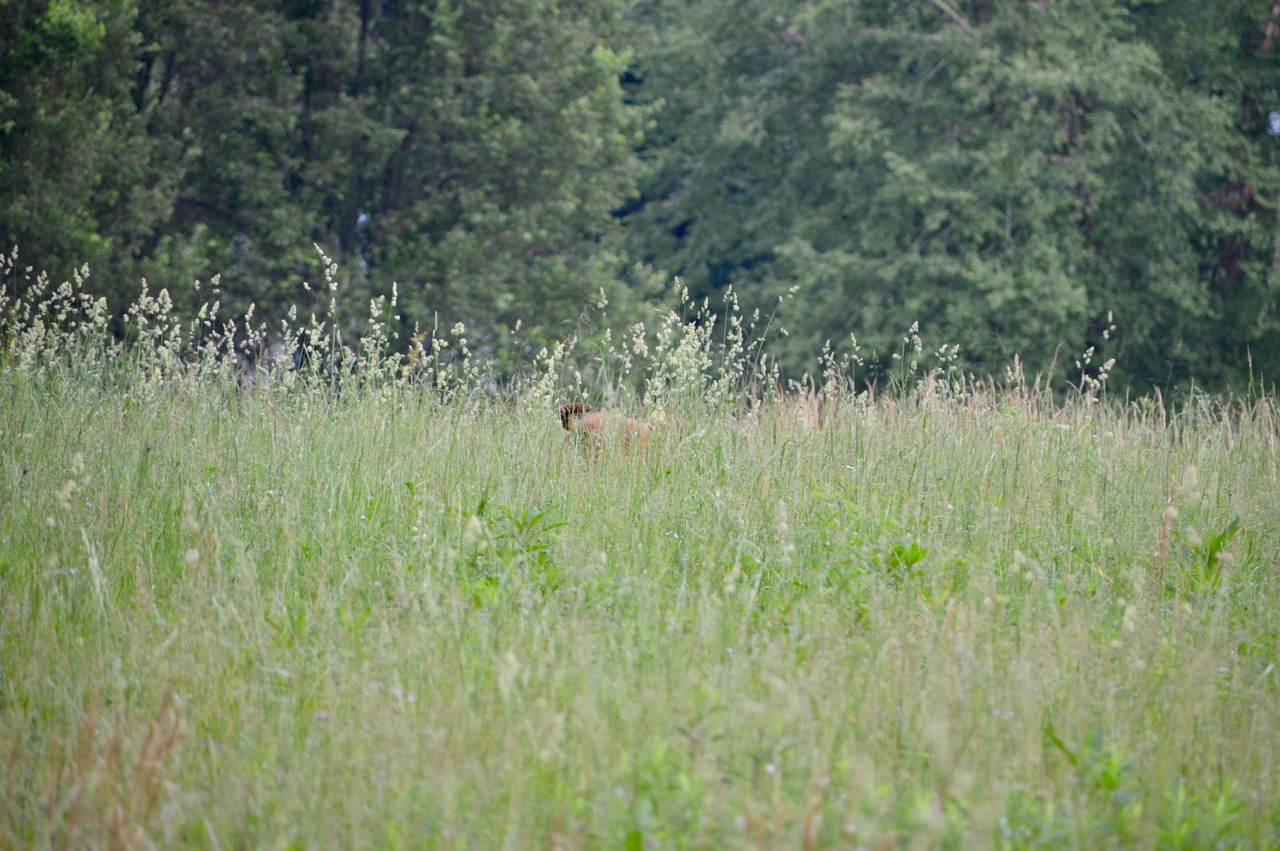 I could barely see Stella heading north, just past the property line pole. While Sadie never changes her routine one the walks, Stella likes to change her routine ever two to three weeks. Why is that? The routines she does not change is when is she back inside the house. She drinks water, moves behind my desk chair and sleeps until lunch. 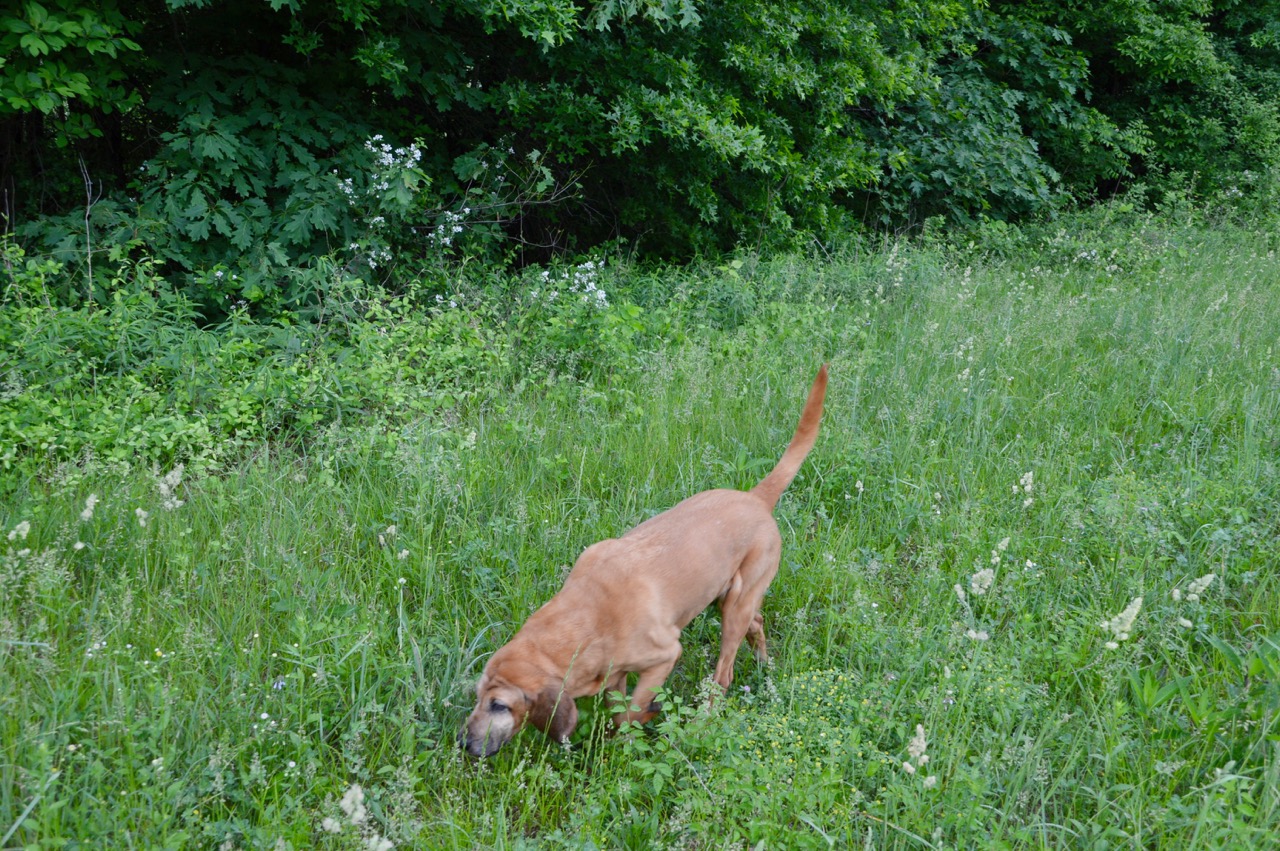 You can see how much different some parts of the field is based on the height and thickness of the grass compared to the field next to the yard. We have a little more than a month before they normally cut it. I always enjoy walking through a cut field or when the grass is shorter. It doesn't matter to Sadie ... she just wants to track scent. 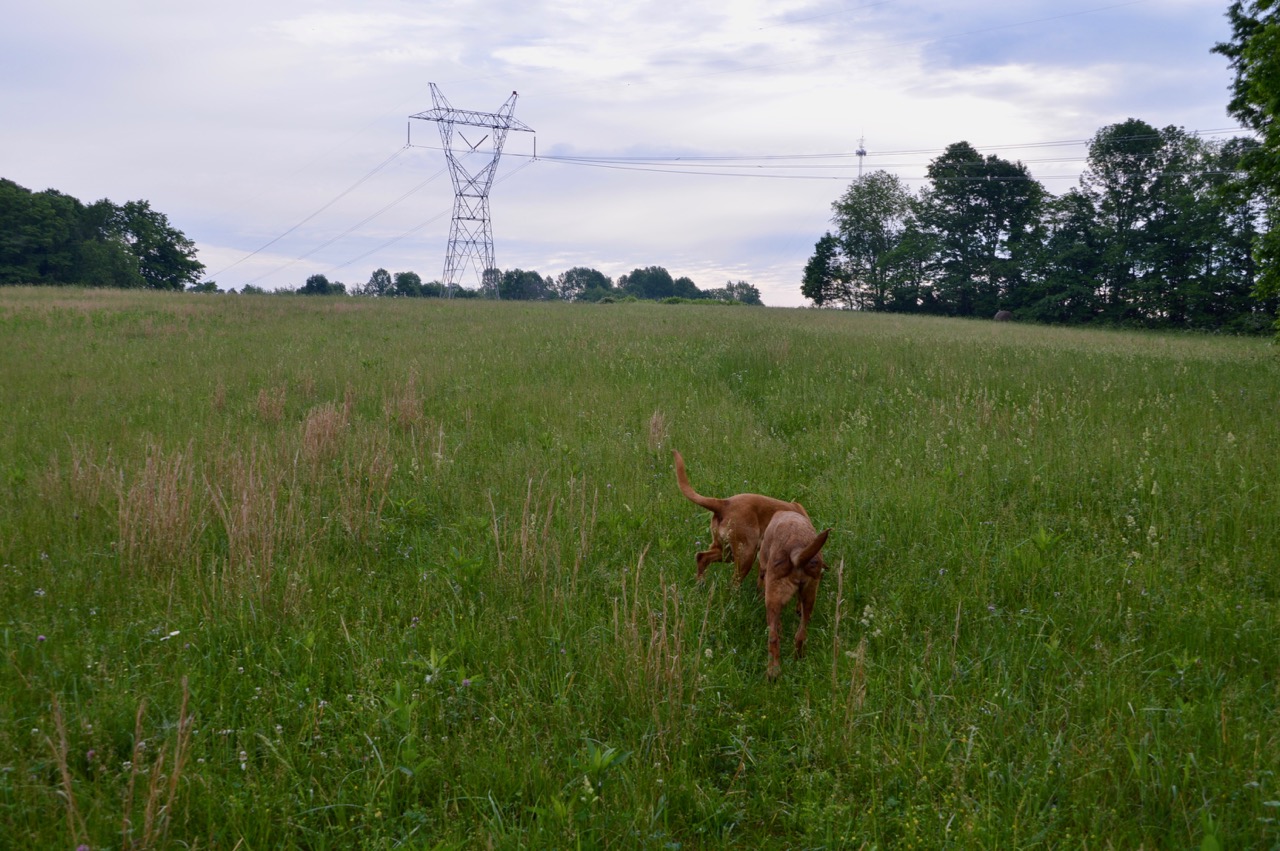 I gradually got Stella back in our direction heading up the return path the wrong direction. Just like yesterday we hopped back over to the normal path going around the first turn. While walking I could see that WeatherBug was correct in their forecast of cloudy skies all day where I was questioning Wunderground's that said we had a good chance of rain. It will keep it cool today at 80° with perfect sleeping weather at night in the 60's with the windows open. 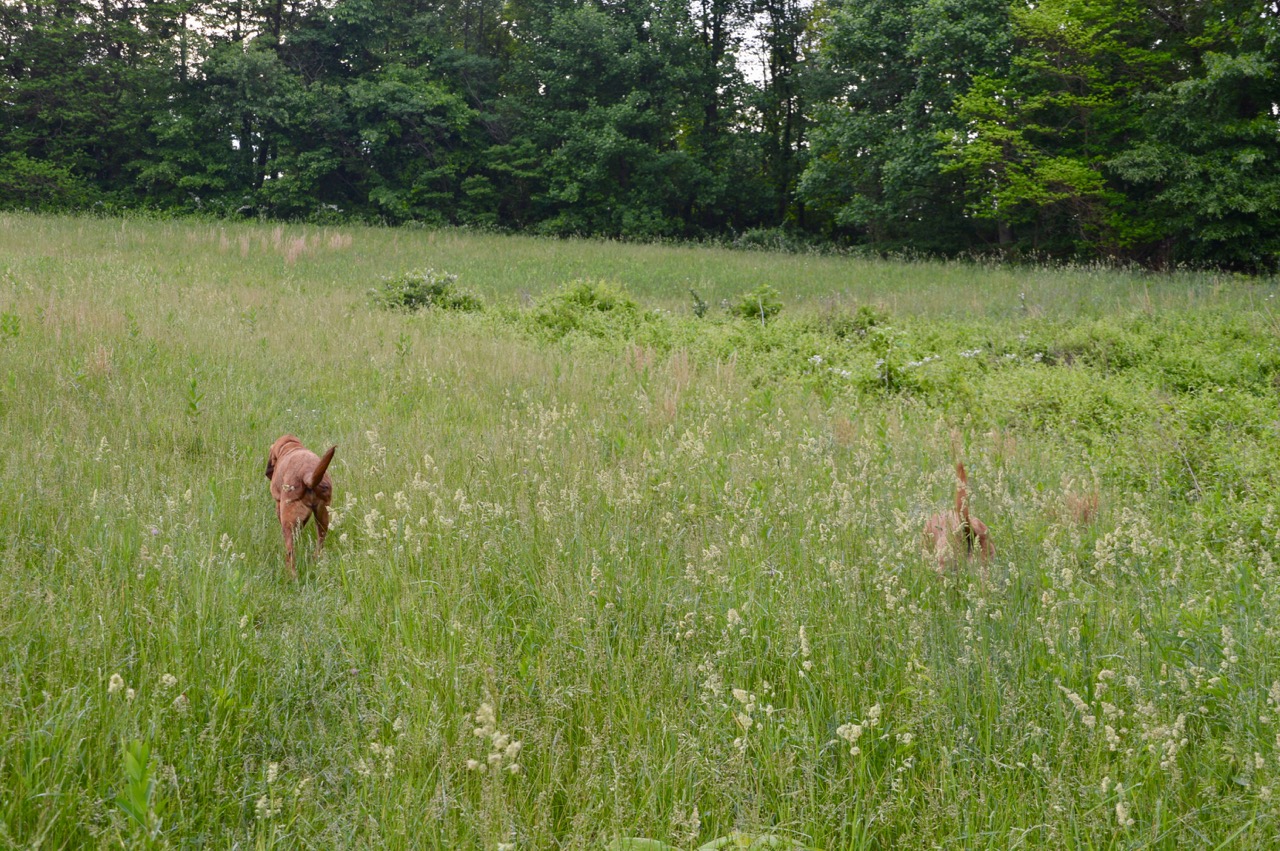 I am in the mood to visit the library today. I haven't been there in a while and unlike a few years ago I didn't make more then three or four trips this past winter. Of course that 'to do list' I have is within view of my computer and another copy taped to the front of the refrigerator. Those reminders don't seem to be working again this summer. 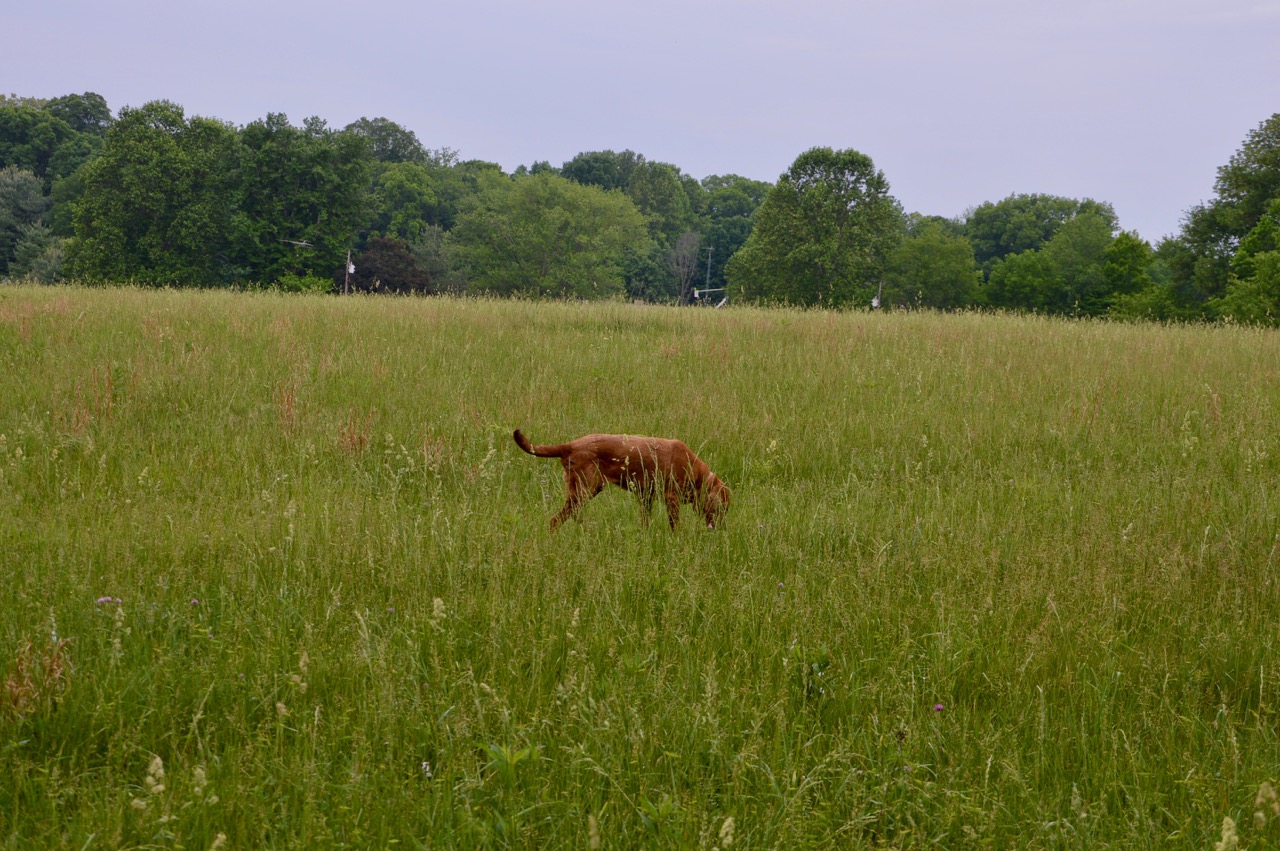 I had heard a chainsaw as soon as we left the house and not until I uploaded this photo on the blog did I see the source of that noise. Off into the distance you can see one of the neighbors have someone trimming their trees. It's a nice, large house and in the twenty years I have lived here I have never seen anyone in the yard, their car in the driveway or even lights on if I pass by during the night. Yet I am told people live there all twelve months of the year and do not spend their winter in Florida.

You can see that Stella continues with her own path along the overgrown ATV path while Sadie and I follow ours along the back edge of the field. 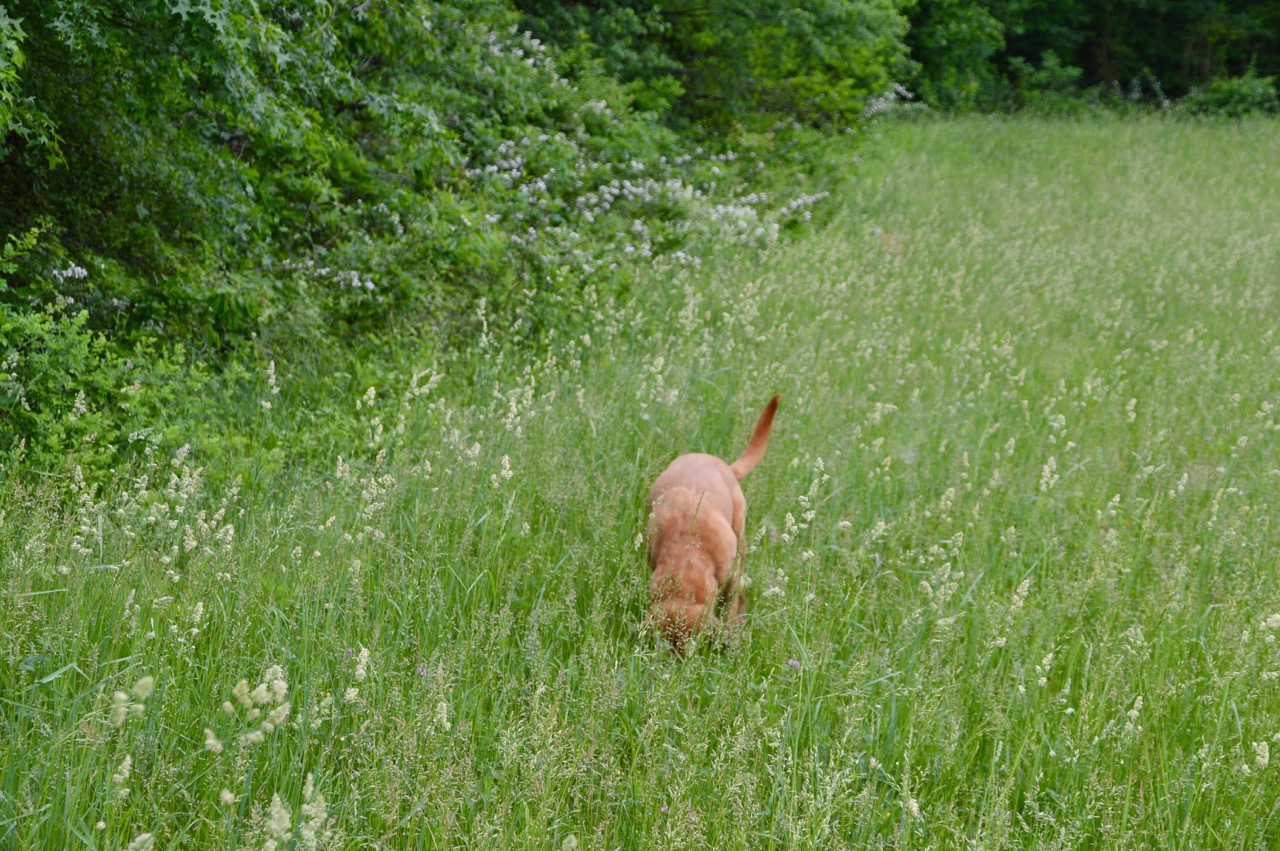 There has never been a scent that Sadie has not enjoyed checking out. 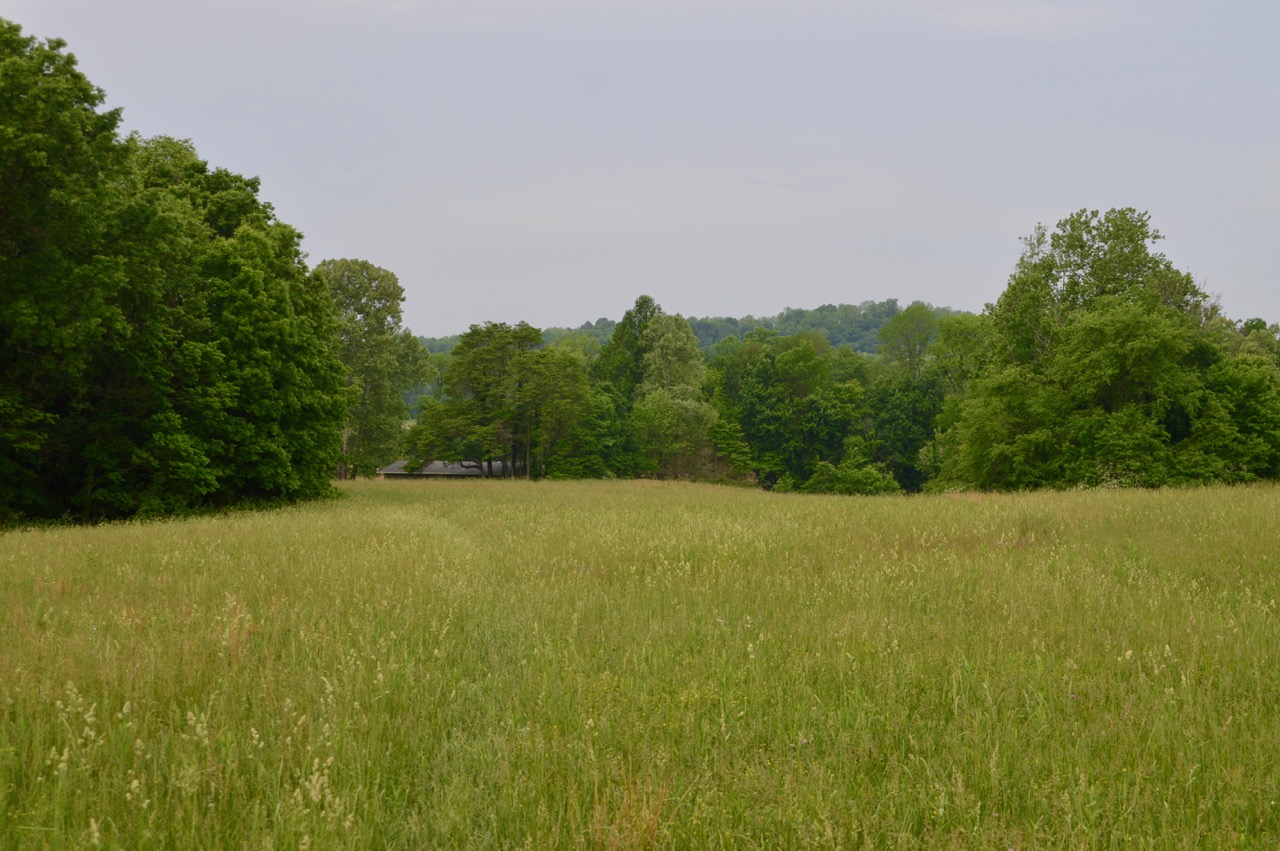 Doesn't it look like one of those dark and gloomy days ahead. At least it is 80° warmer than those winter days that I don't care for. A friend of mine is trying to help me adapt to those freezing winter hound walks and has mailed me a Carhartt full length coverall. I should receive it in the mail today. He claims he wore it only once because it was a little long and thinks I'll have a better chance to fit into them. 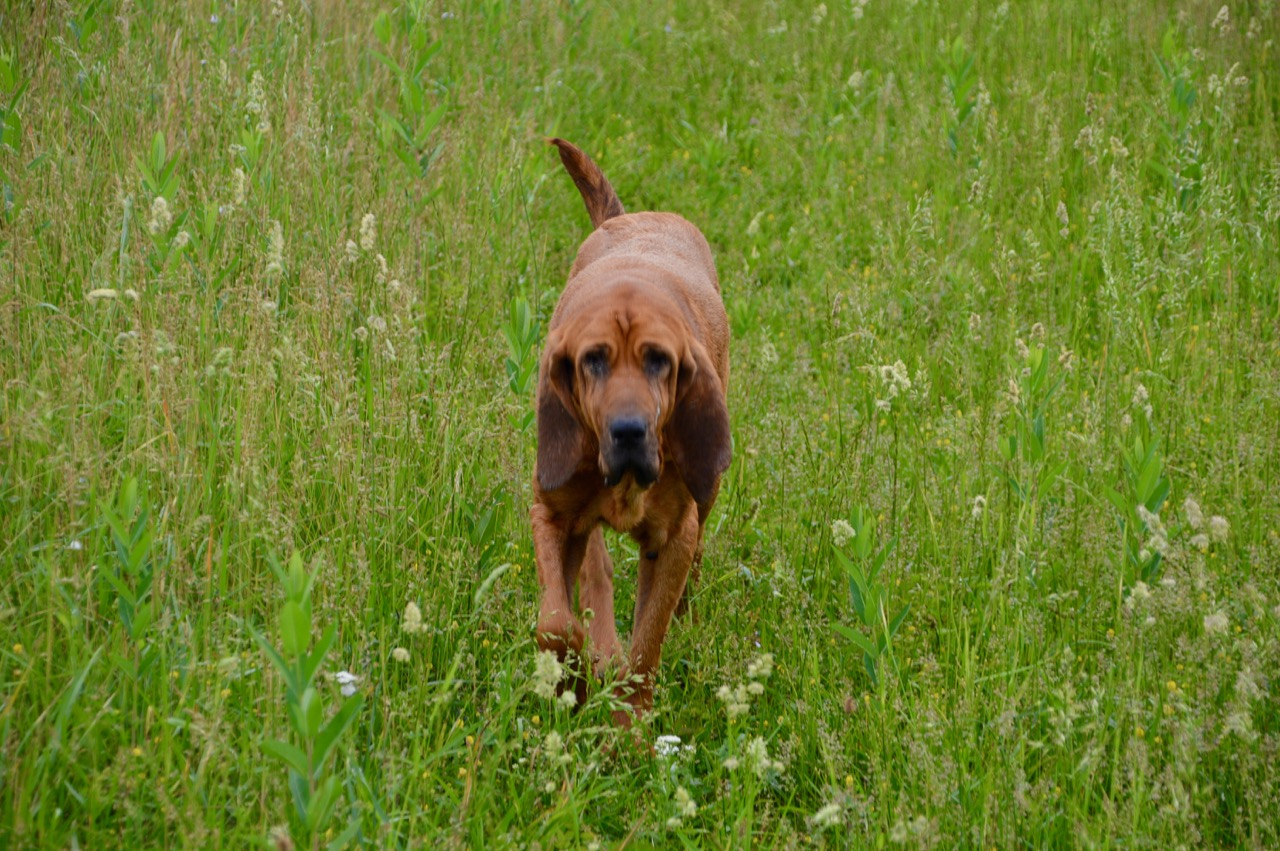 Stella has one speed, all day on any walk ... "slower than slow". 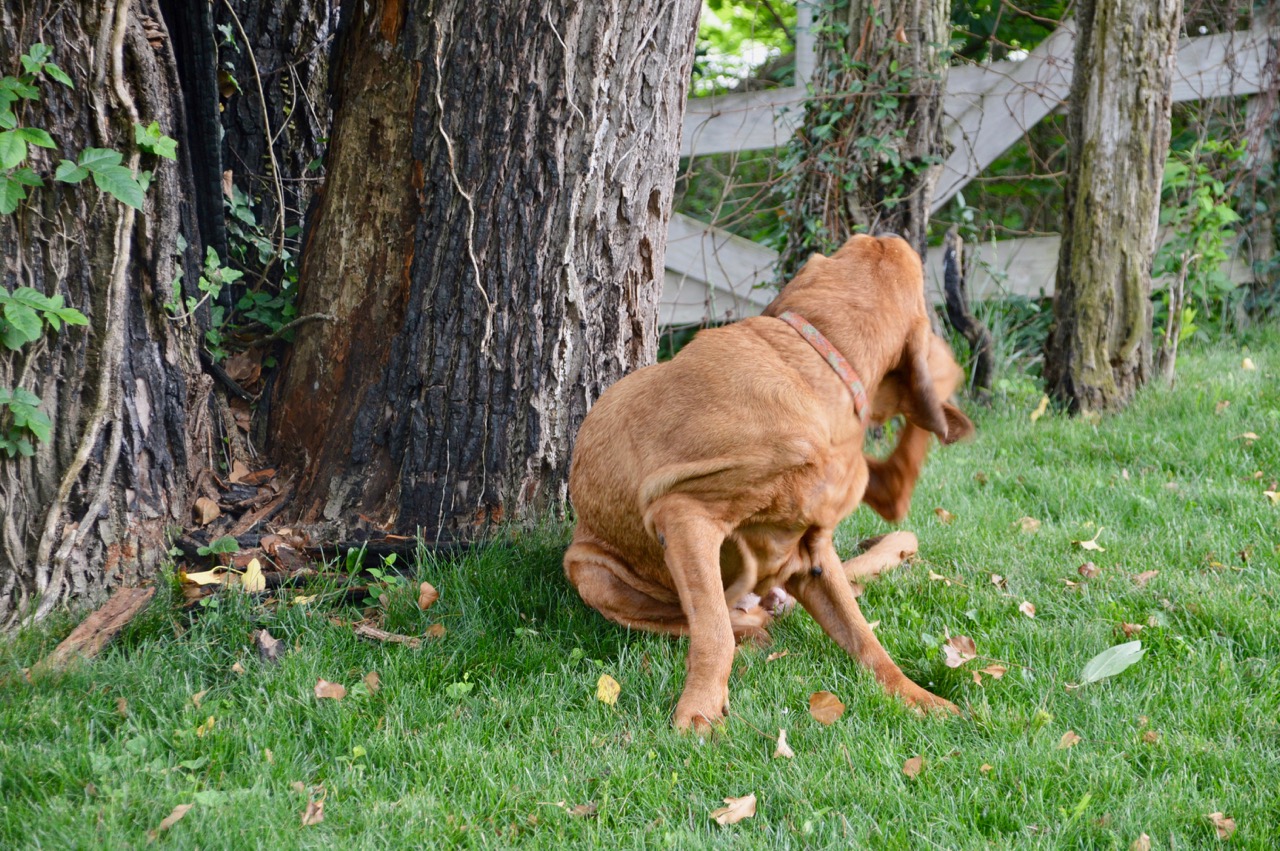 There are three places she likes to stop and scratch on this walk and this is one of them. The exact some place after each morning walk. No fleas have been found, no ticks, just seasonal allergies.

Back to those Sunday's "I don't knows" ... they were basically about what to eat, what to watch on tv or what to do. When I was hungry I didn't know what for, except I was positive it was for nothing I had in the kitchen. I didn't know what I was hungry for. As far as tv, 200 channels although I don't have many of them on my programmed remote ... but those that I listed had nothing interesting on tv.

If they ever come out with a program package of just sports channels in the future, that is all I would buy. I keep thinking that by the time my two year contract is up with Dish Network the source of tv signals will be so much different by then I may not have a satellite dish mounted for tv nor my internet.

I spent some time yesterday afternoon sitting outside but it is turning into the typical summer war with bugs, bees, wasps or allergies. The hounds didn't want to stay outside long either as they were more interested in being in their normal afternoon spots where they sleep all day. That led me back into the "I don't know...." routine. 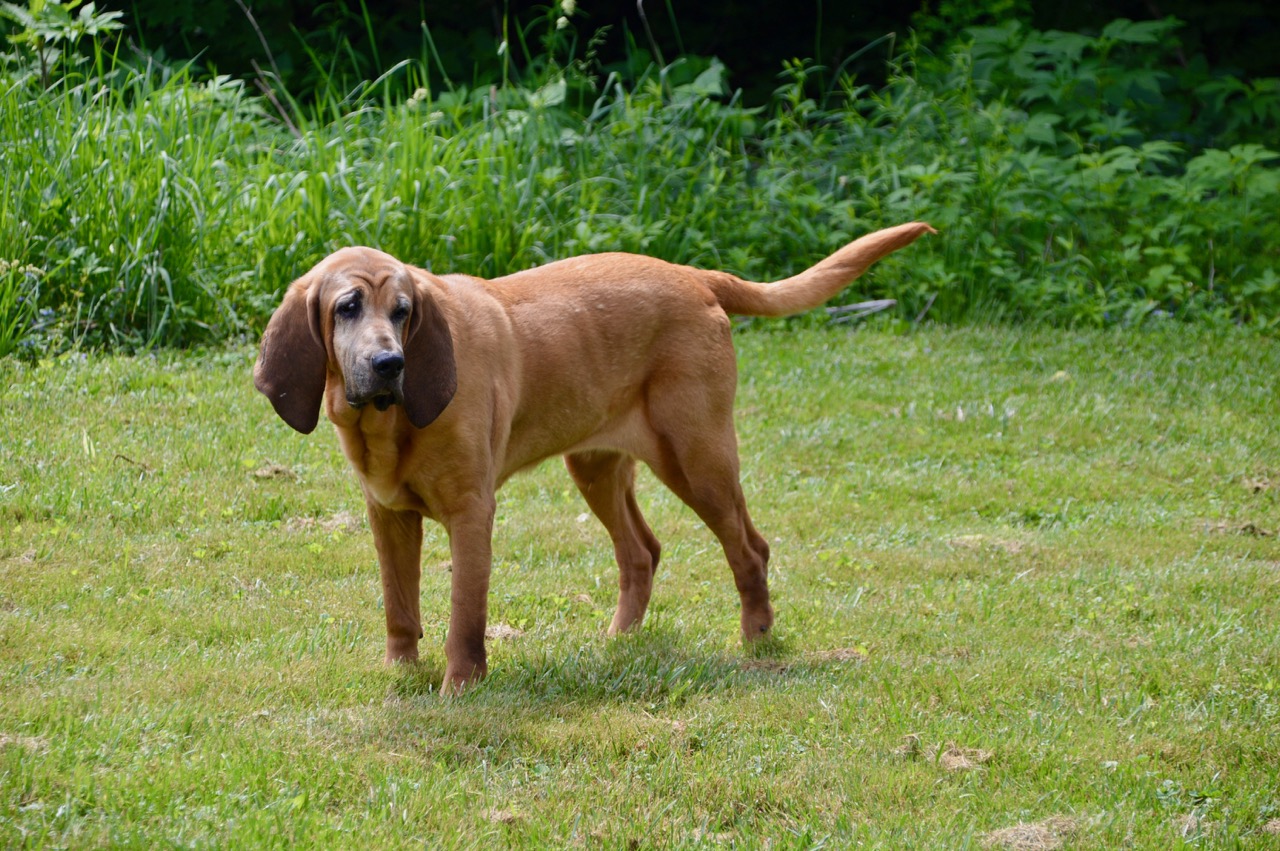 We all checked the weather outside right after lunch. No rain and slightly cooler than yesterday so I went back inside to grab the batteries to the weed eater and finish the bank along the driveway. The weeds seem to die out by the sun and heat if I cut them to ground level, not completely out of  view but much better for the hounds doing it that way. 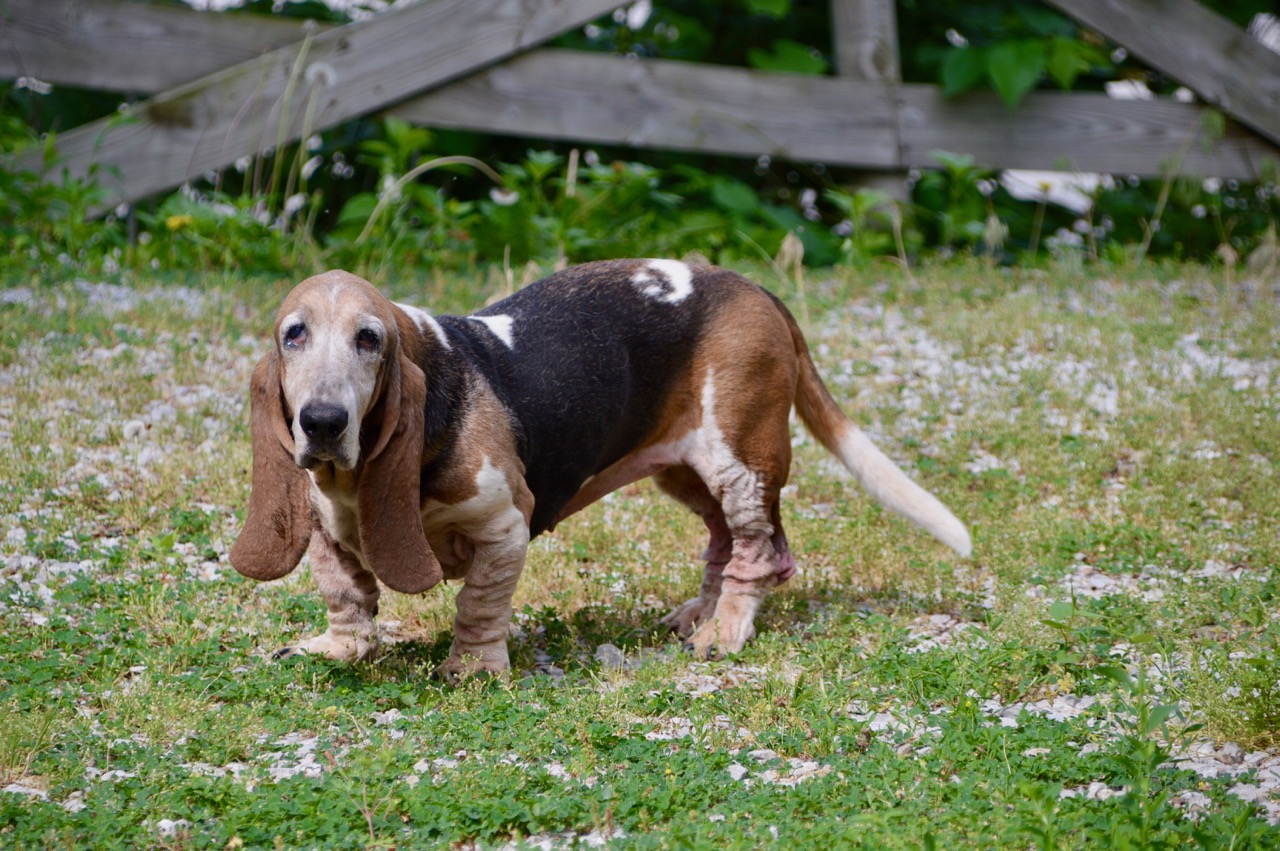 Heidi was enjoying the afternoon and I later saw her laying in the shade in the north backyard, a place she hasn't gone, while I was beating down the weeds along the driveway fence. 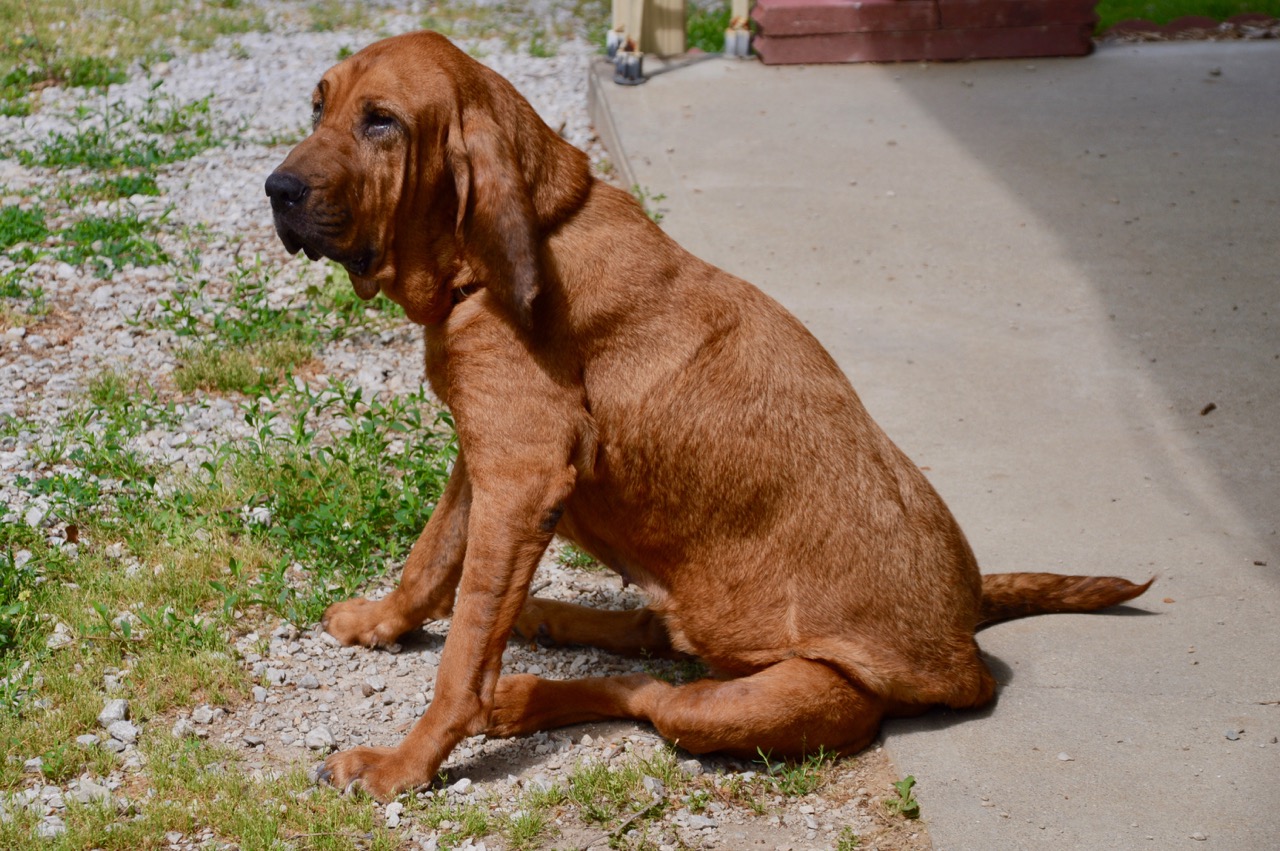 Stella always likes to think after lunch before she makes any commitments. She is pretty use to sleeping right after lunch. Those weeds you see were gone soon after I took this photo. 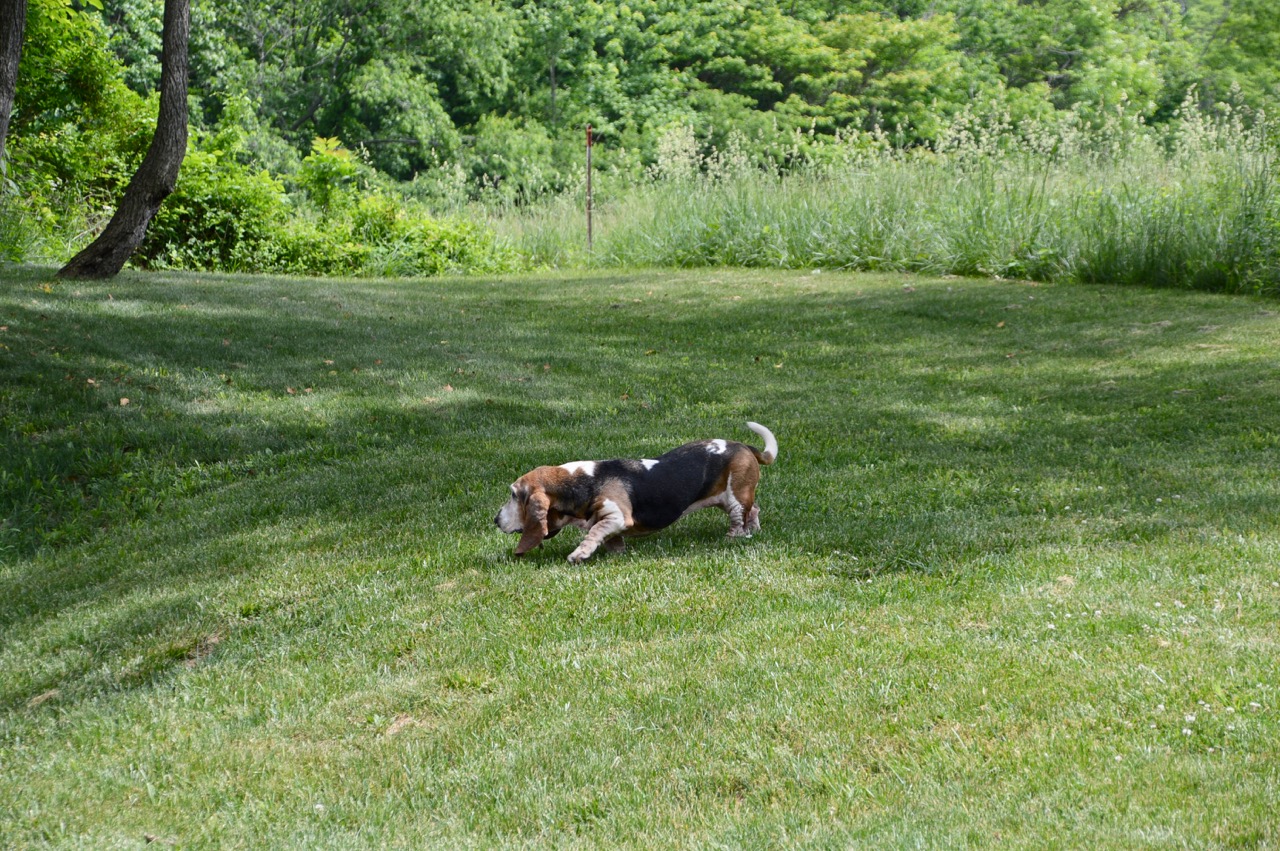 I thought I was going to be able to catch Heidi laying in the shade enjoying the day but she saw me looking at her without the camera so she started to walk or trot toward me. I barely had time to grab the camera off the kitchen table and return to take a couple of photos. 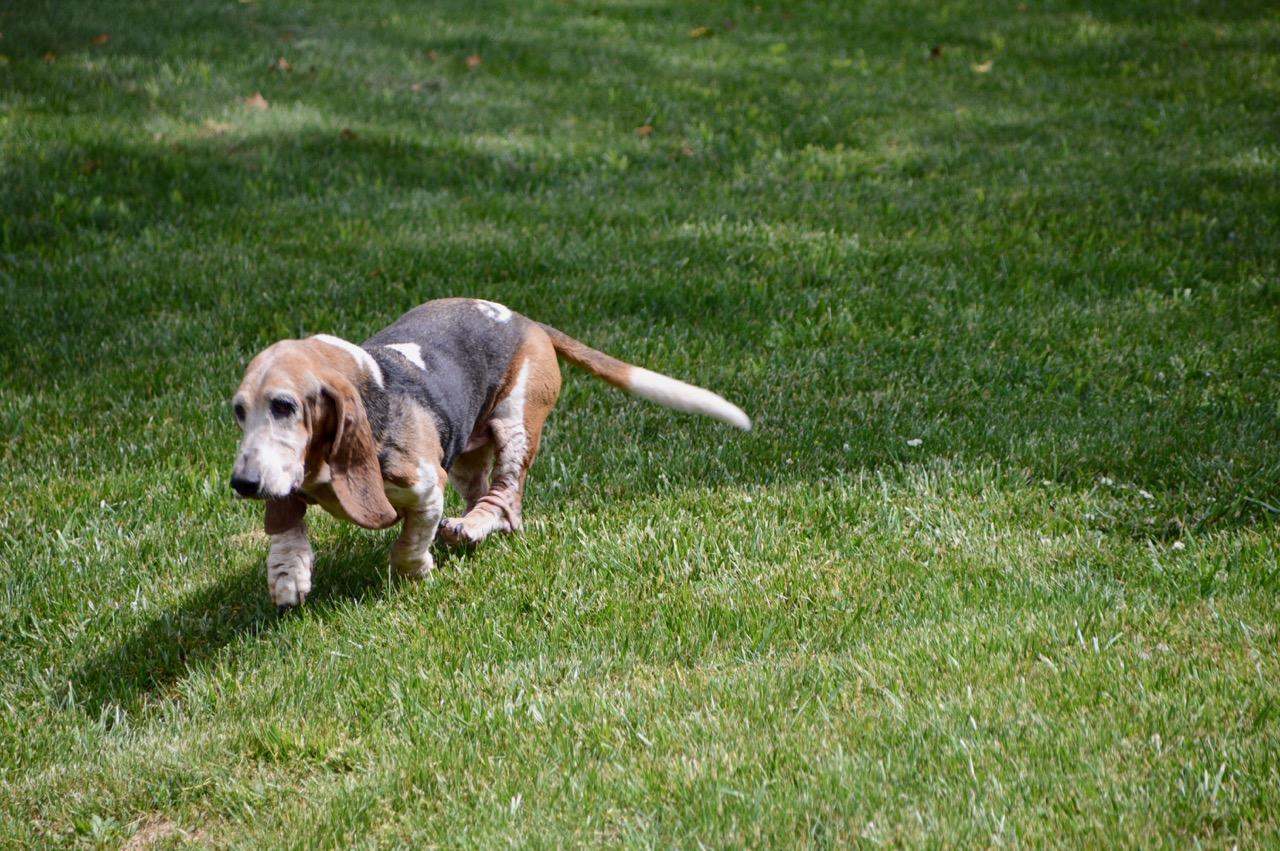 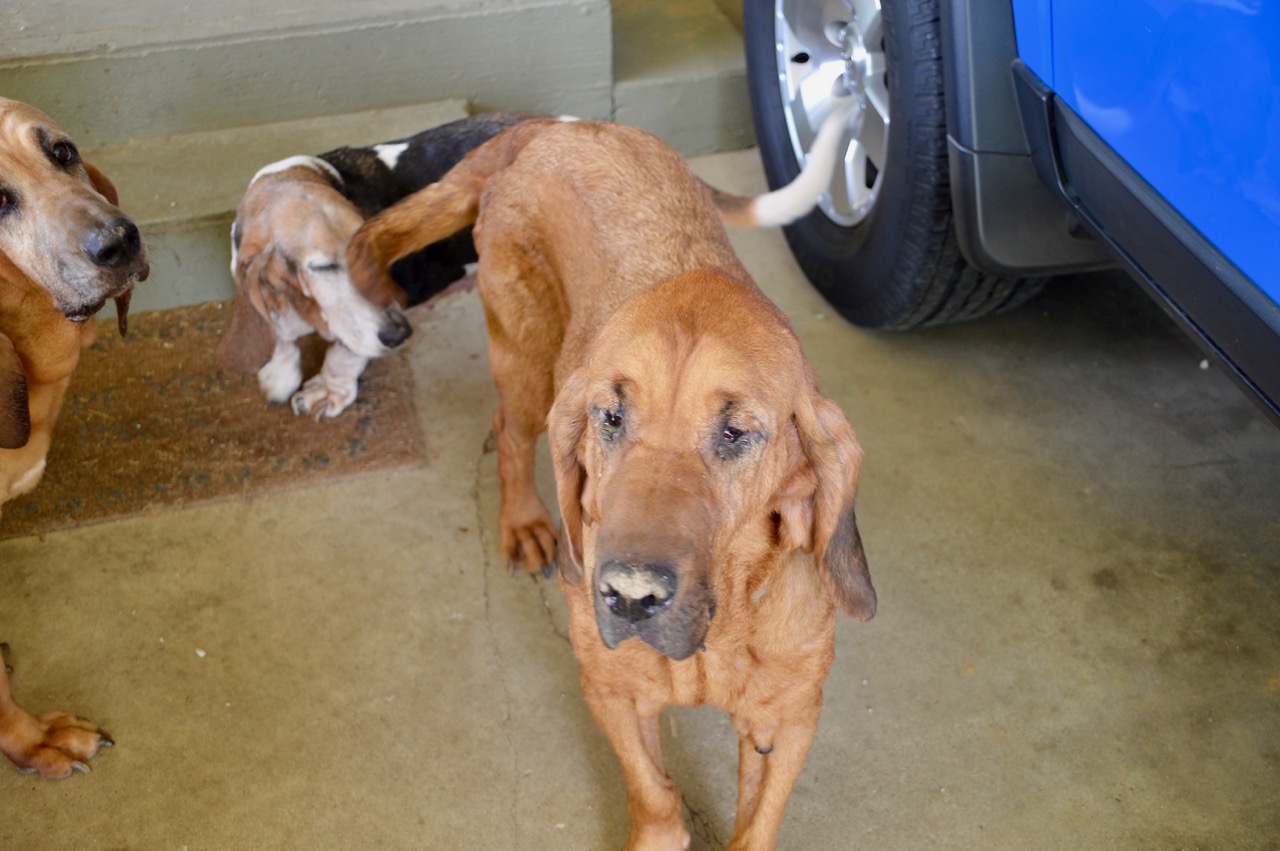 While I was killing weeds along the bank of the driveway I kept looking toward the backyard to see if the bloodhounds were still around or had they snuck off into the field. Each time Stella was in view walking around the yard. I didn't know what she had been doing until I was about ready to go inside ... she had been eating pure brown dirt. She likes dirt.

The afternoon was slow enough and cool enough to keep the windows open. I grabbed the book I just finished the other day and started reading it for a second time. Too lazy to get in the FJ and go grocery shopping so I put that off for another day. You never want to get everything done in one day when you are retired. You must spread out your activities to keep sane.

I was almost able to set some new time records in my Mahjong game earlier today. I finished one game under 3 minutes for the first time ever and two other games I broke the previous record of 2:41. I don't think I can eliminate all of the Mahjong tiles any faster than that.

I had another friend tell me today telling me they was shutting their blog down after 10 years. They were also considering getting rid of all of their social media accounts. Is this a new trend?? Other full-time travelers are getting off the road and moving into houses for the first time in a long time.

I love the Indy500 but always watch at home instead of going to the race. Looking at the forecast for Sunday in Indianapolis it looks like rain may happen. If it does, that turns into a long day trying to get 500 miles in while stopping the race for rain and then taking the time to dry the track. That is another good reason to watch at home from the couch ... no lines at the concession (fridge) and no lines at the restrooms (my bathroom).

Another great day checked off in 'the tropics' of Southern Indiana.
at May 21, 2018
Email ThisBlogThis!Share to TwitterShare to FacebookShare to Pinterest
Labels: Bloodhound Tracking, Seasonal Allergies, Stella Roams, Stella Thinking