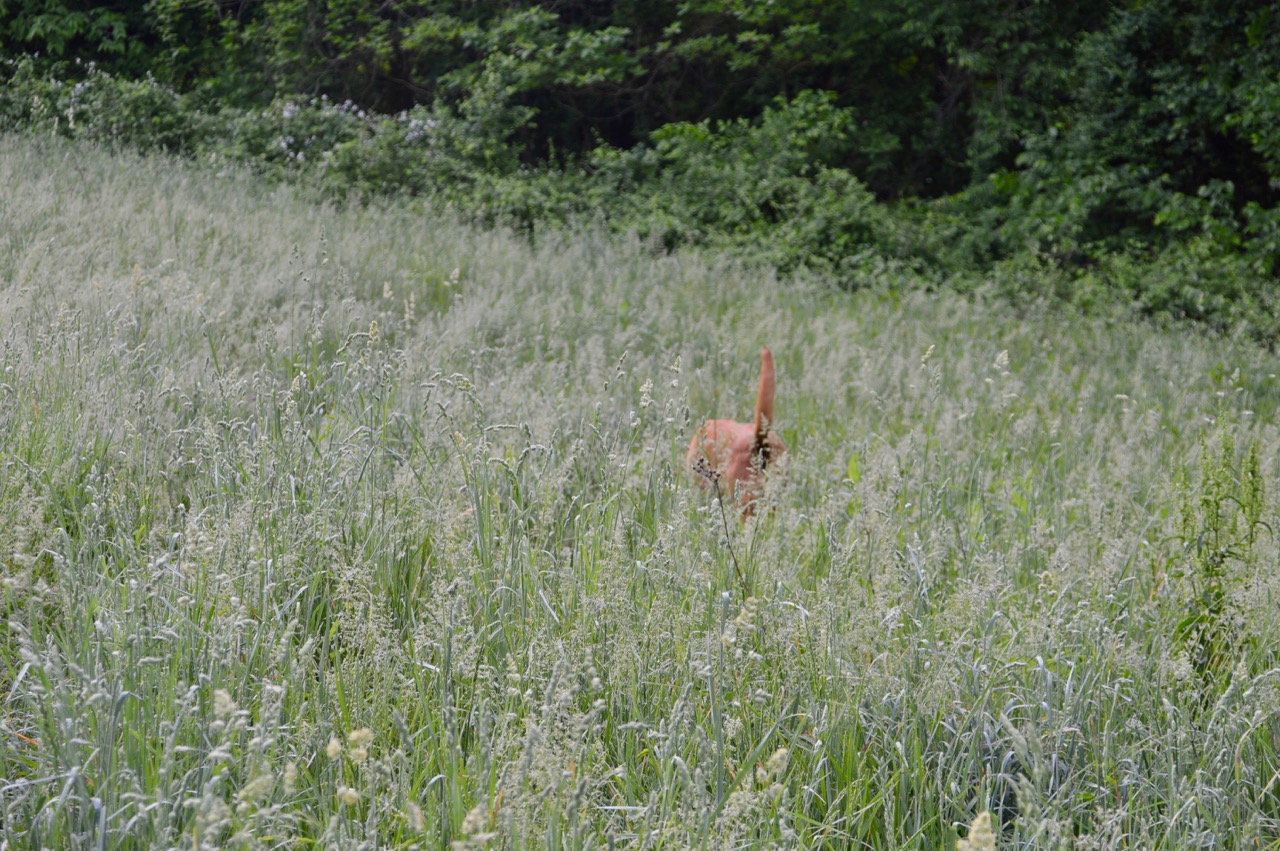 This morning was Day Two of Stella's Total Freedom routine. On the way back I had an uneasy feeling about my decision because she was nowhere on the horizon as I scanned from the center of the field to my right to see the woods behind the neighbor. The search was going to have to take place with shoes and feet so wet I could feel the water squishing inside my shoe with each step. Another poor decision choosing the New Balance running shoes with the field so wet. As Sadie took off on the normal path I could see the field was continuing to grow at a rapid rate. Within 10' of stepping into the field from the yard my legs were wet from the heavy morning dew. As I glanced back at the house, the grass is tall enough now that I couldn't see Stella anywhere.

She had decided to walk north through the yard, not even close to where Stella and I were. I have a feeling she is really enjoying her new found freedom without any verbal herding by me. Where would she end up this morning? 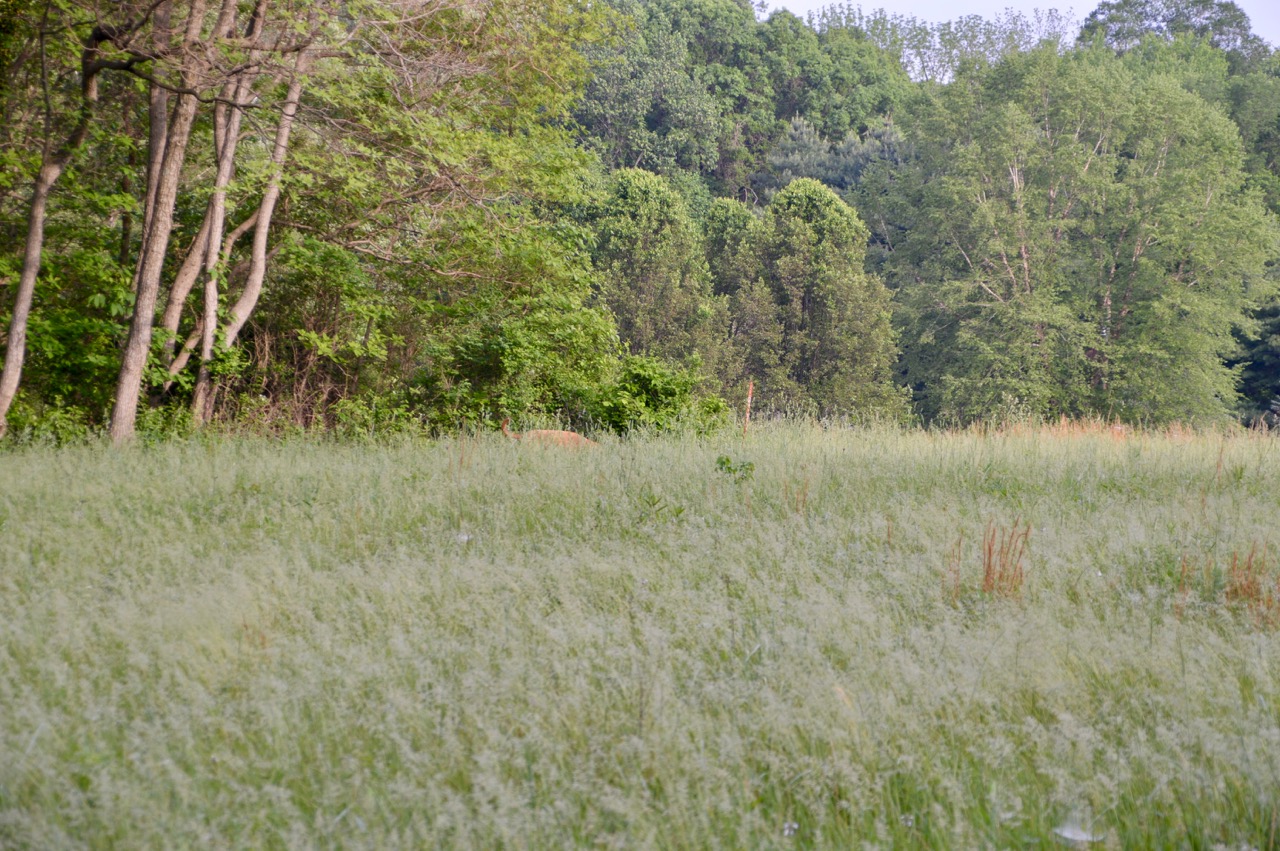 Just passing the property line pole and heading due north. 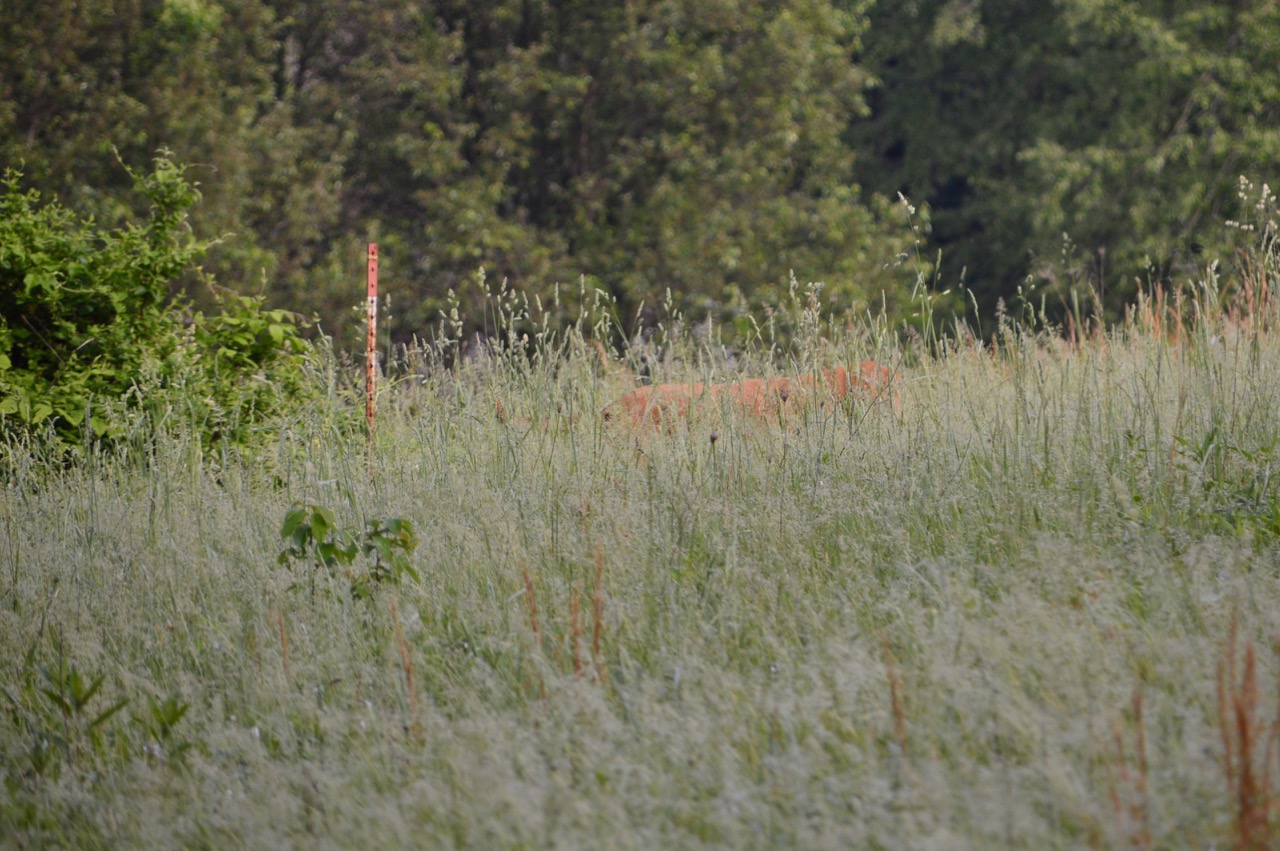 Sadie's face, ears and legs were already as soaked as my shoes were soon after she started. That never bothers her. 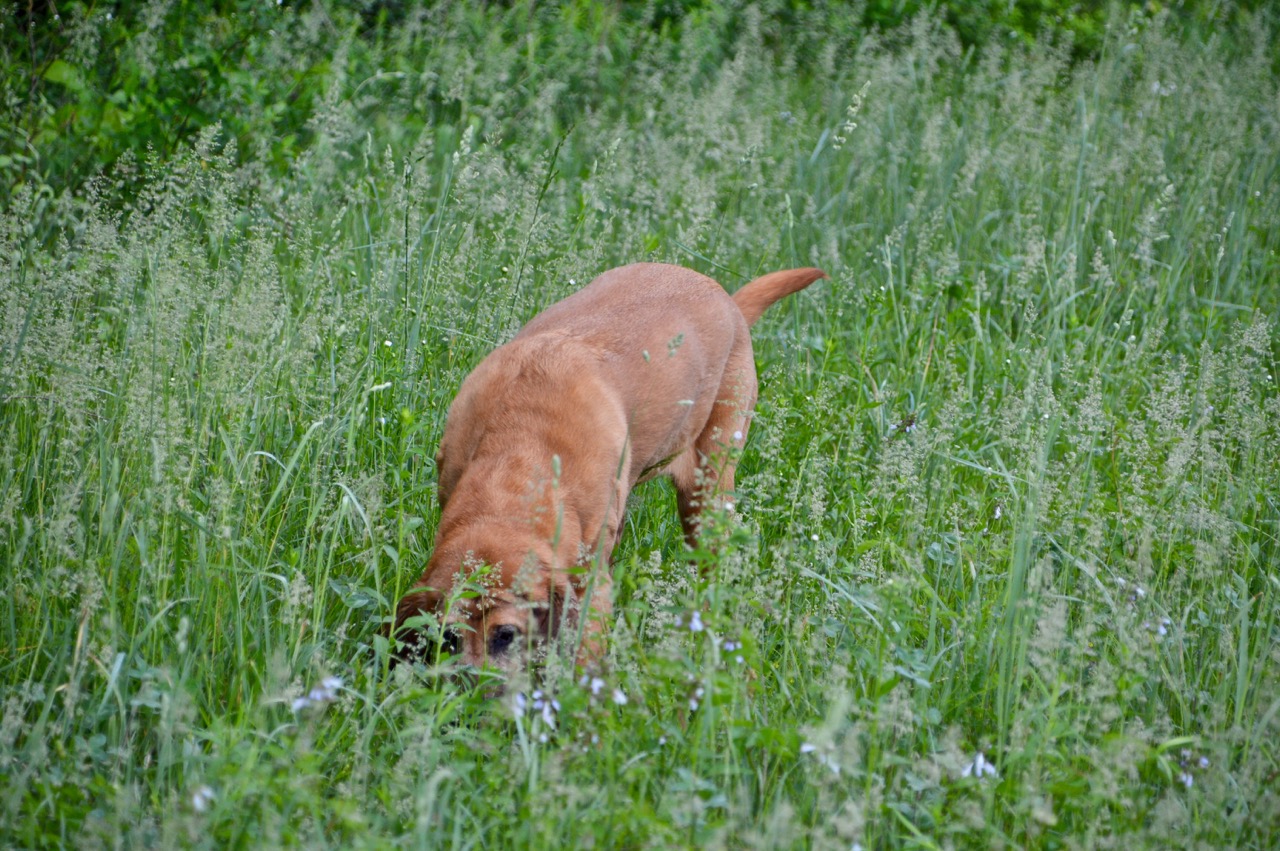 By the time I approached the first turn both hounds were almost complete out of view. Stella because she was hidden some where in the middle of the field and Sadie standing in taller grass over by the edge of the field and brush line.

I turned and kept walking. 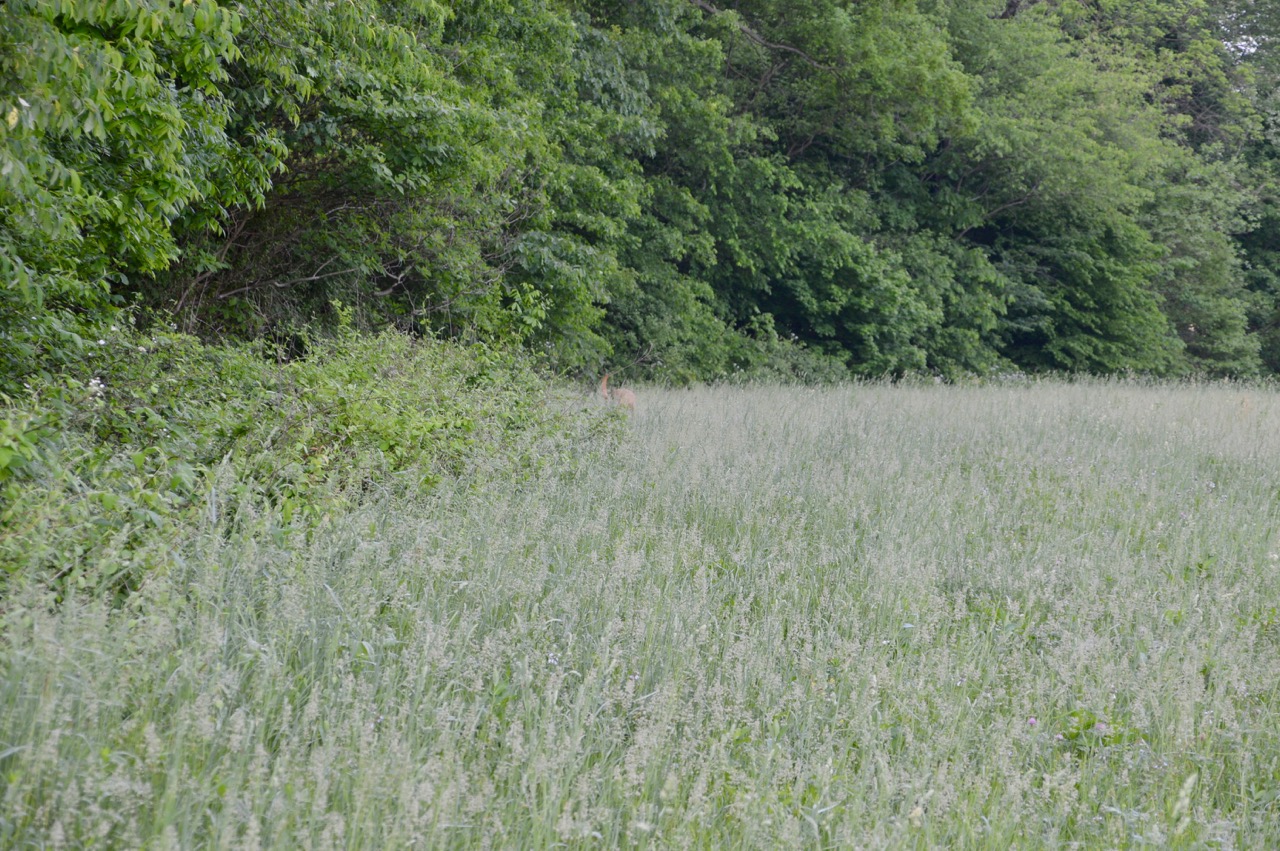 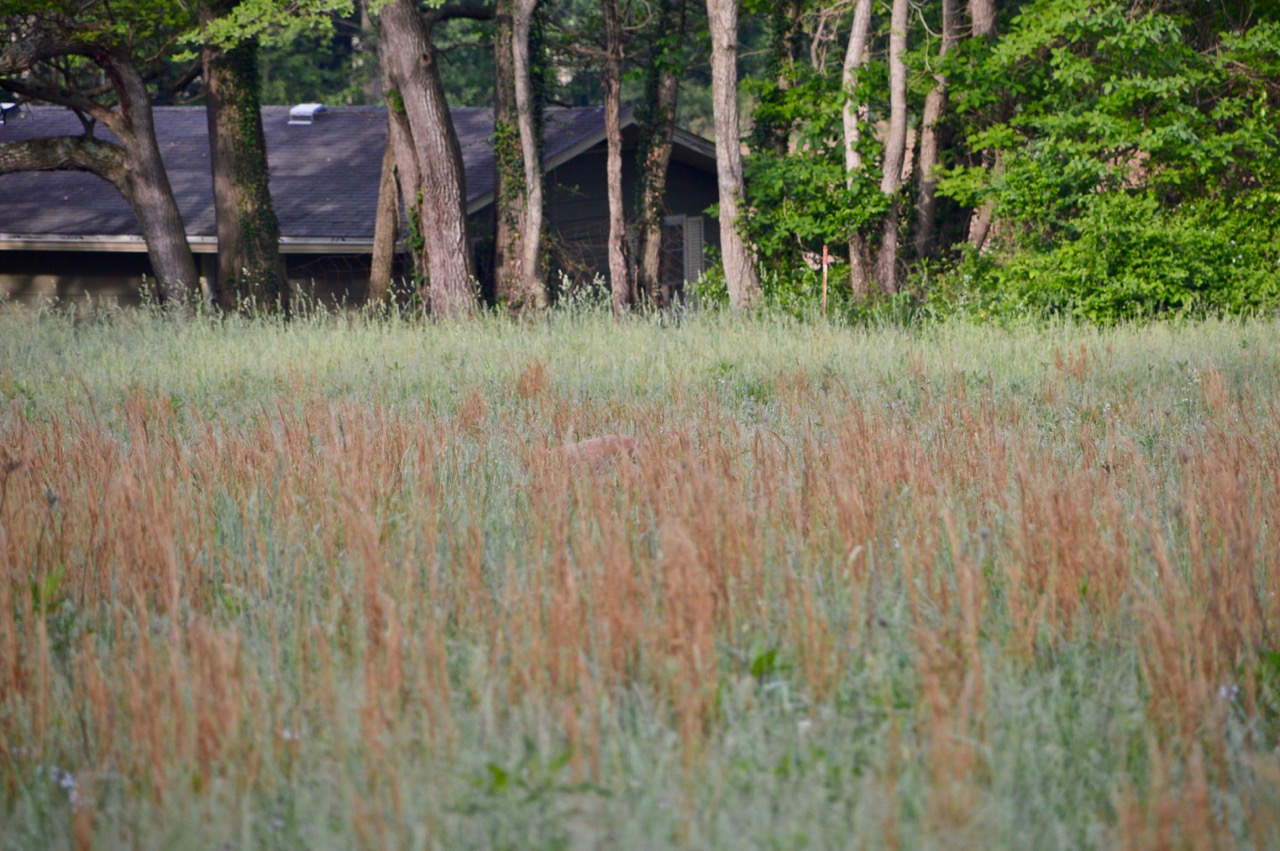 I was hoping I'd get some photos of Sadie running to catch up with me but by the time I turned around she was already close to me. I took some rapid fire photos and came up with only this one, while the others were too blurry to post here. Nothing like shaking your head dry while on the run. 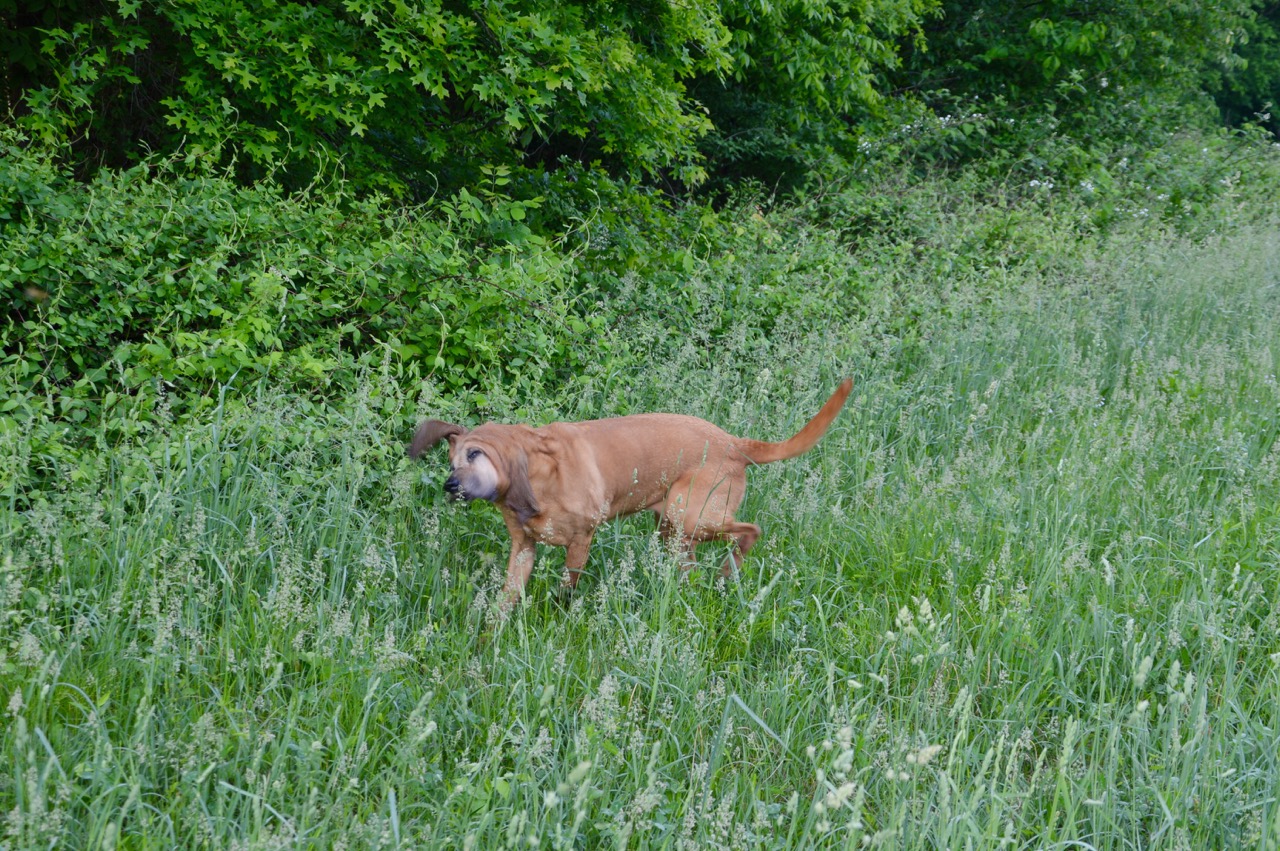 Amazing how the dew stayed in perfect round balls lined up along the seam of the leaf. 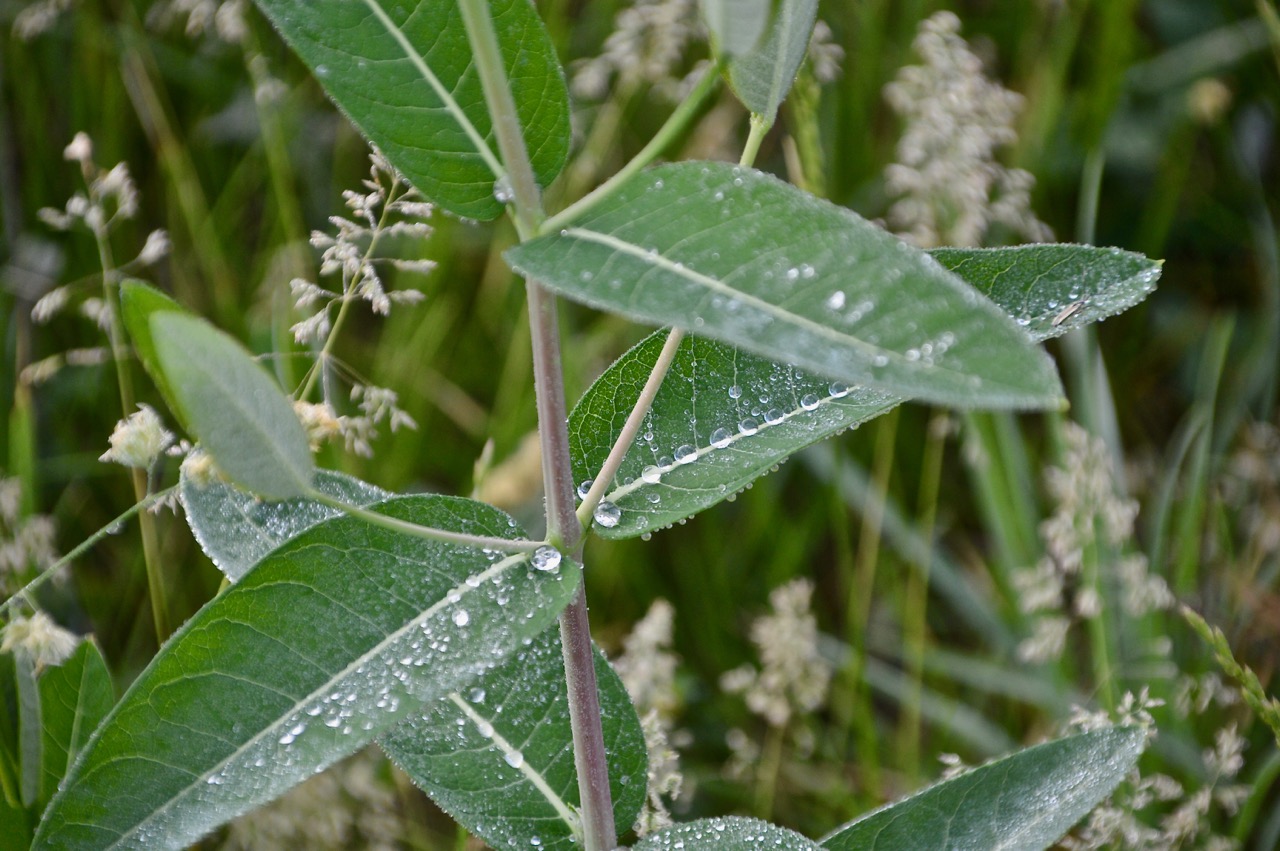 With a slight wind out of the North/Northeast, this morning had that feeling of muggy. I could tell it was going to be hotter than yesterday yet the weather apps were saying no higher than 84°. We've gone from 15° below normal in April to 10° above normal so far in May. We are already in what I call "June Weather". 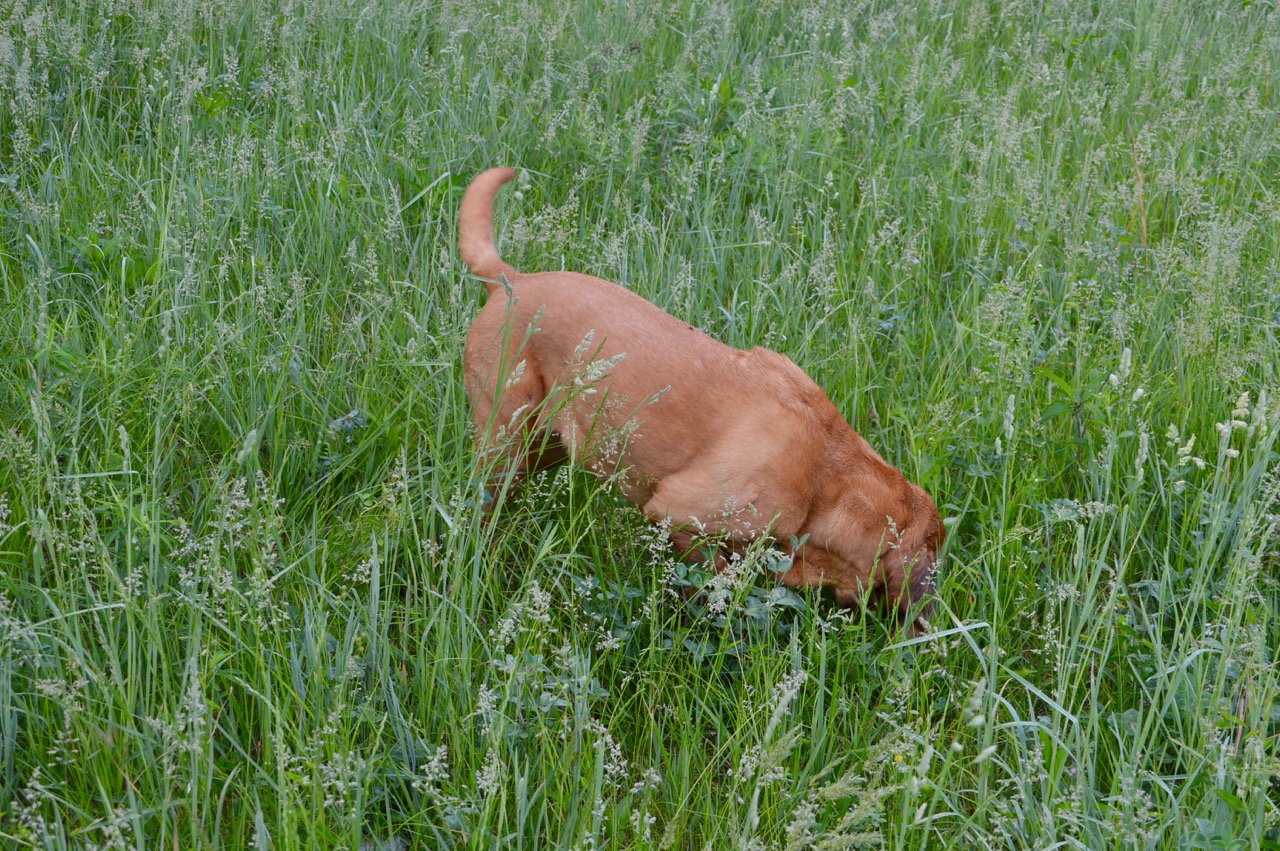 Heading back on the return path at a faster pace with that uneasy feeling I had about Stella, I told Sadie to "go find Stella". She took off running straight ahead but for some reason stopped until I caught up with her. I was still scanning the field straight ahead and then toward the woods. She must be down in that drainage ditch next to the neighbor's yard. 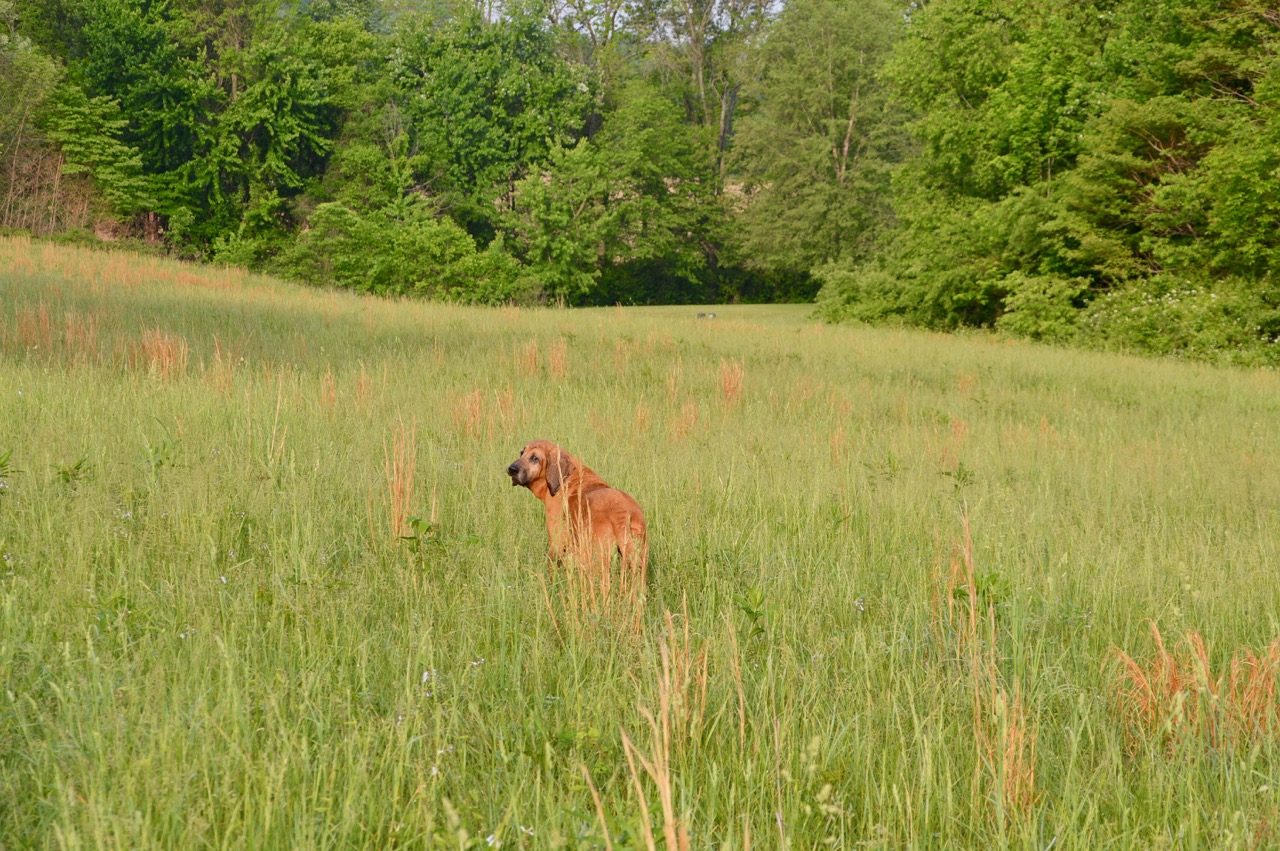 Then my eyes caught just a little movement in my vision to the left of me .... unbelievable ... Stella had not moved 10' while Sadie and I did the half mile loop. 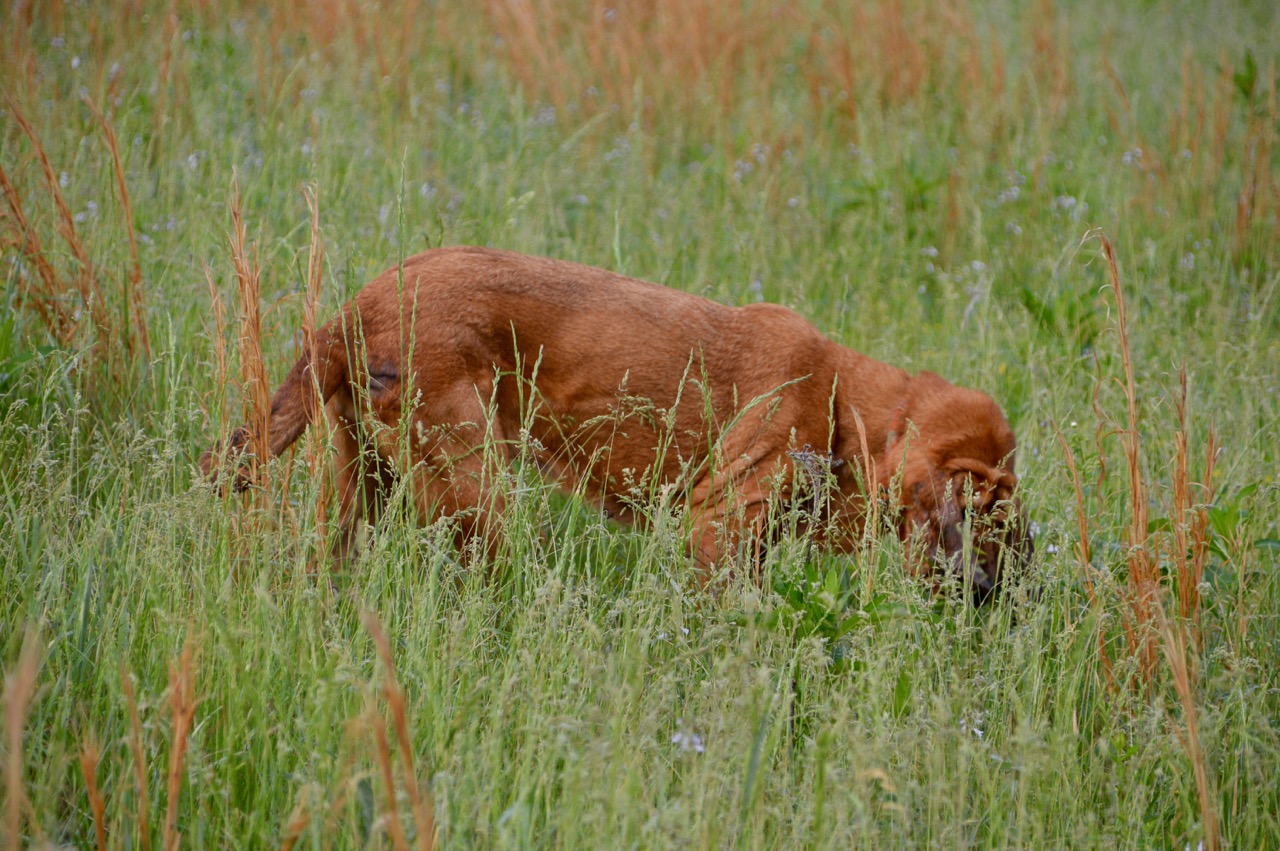 You would have thought by looking at her wet face, ears and legs that she had  ran a mini-marathon but from the location I last saw her ... she had moved 10' max. That was much better than having to walk through more tall wet grass looking for her. She was near the path waiting for us.

Notice how short the grass is in the middle of the field compared to the lower part behind the house that has a lot of winter fertilizer from the hounds. 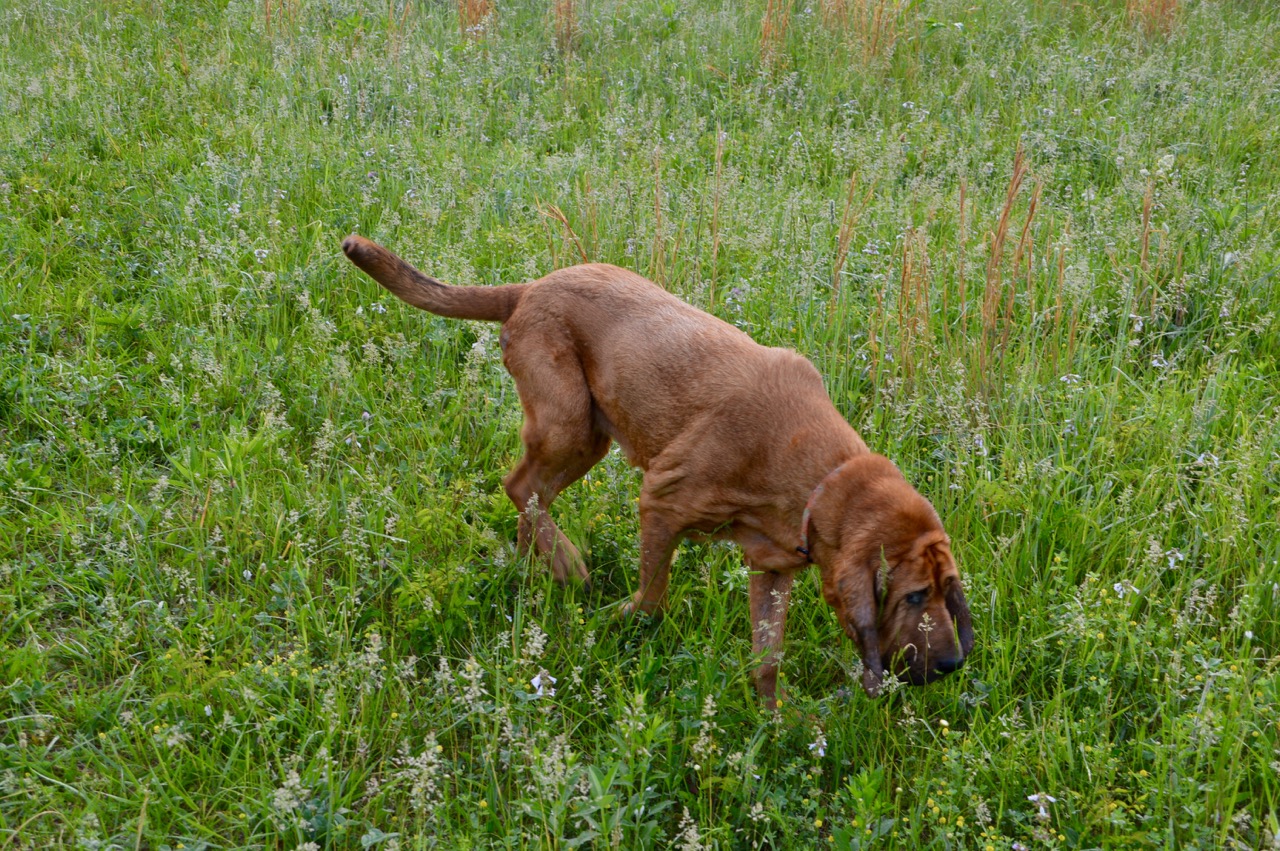 Like every morning when we take the 'alternate' route, they scan the backyard from the property line pole all the way to the carport. No squirrel was seen this morning but I did hear that same animal conversation in the middle of the night, outside my window. 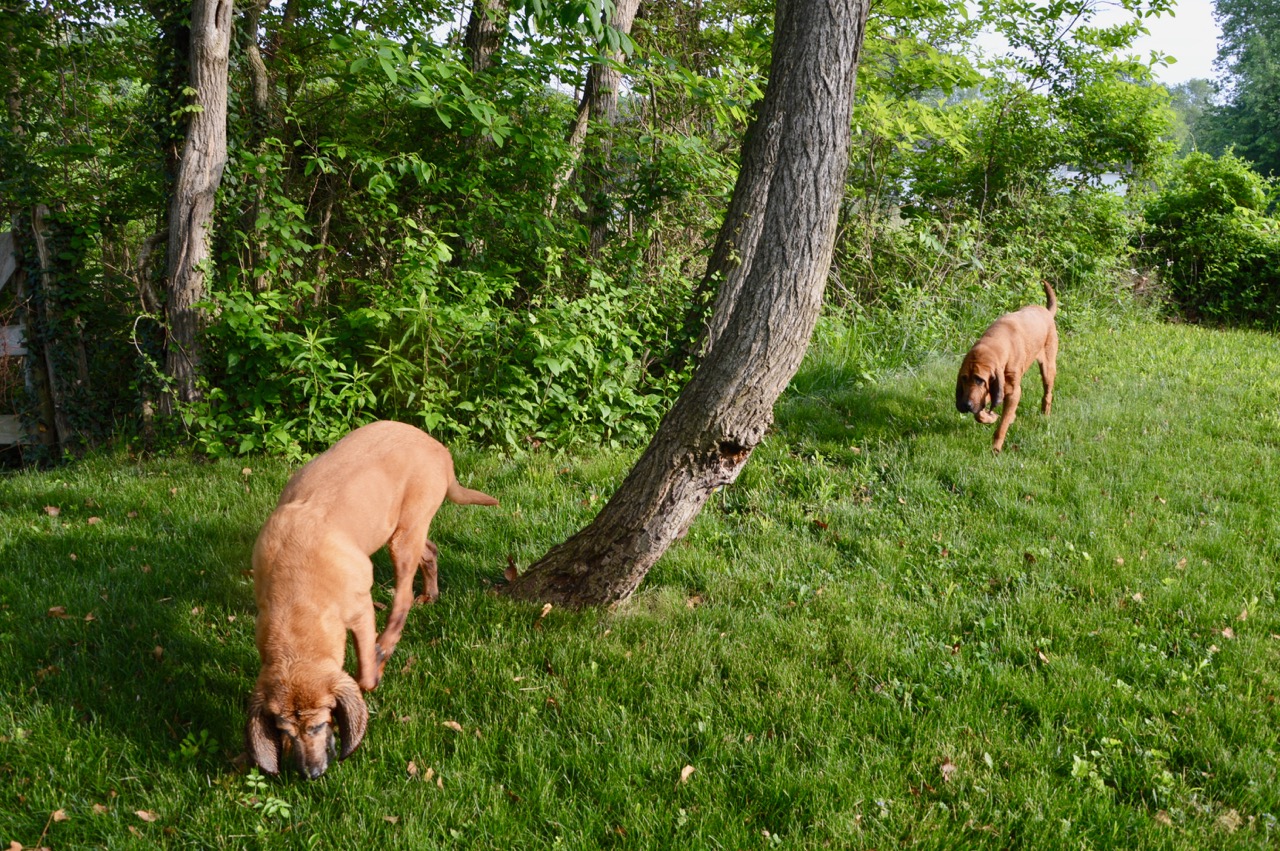 A couple of days ago when I saw forecasts of 30% to 80% change of rain for the next 4 days I put the car cover on the Z4 .... so it hasn't rained. It does not take that long to take it off or put it on, so driving it is just a few minutes away, when I want to.

Heidi's inner weather app has told her it's has to be mid-summer weather so she has gone back to her Phase II Hibernation ... I had to check a few times between meals if she was breathing because she was in that deep of a sleep. I am not sure when her next session of high activity will be ... but this is the normal life of a basset hound in the summer. 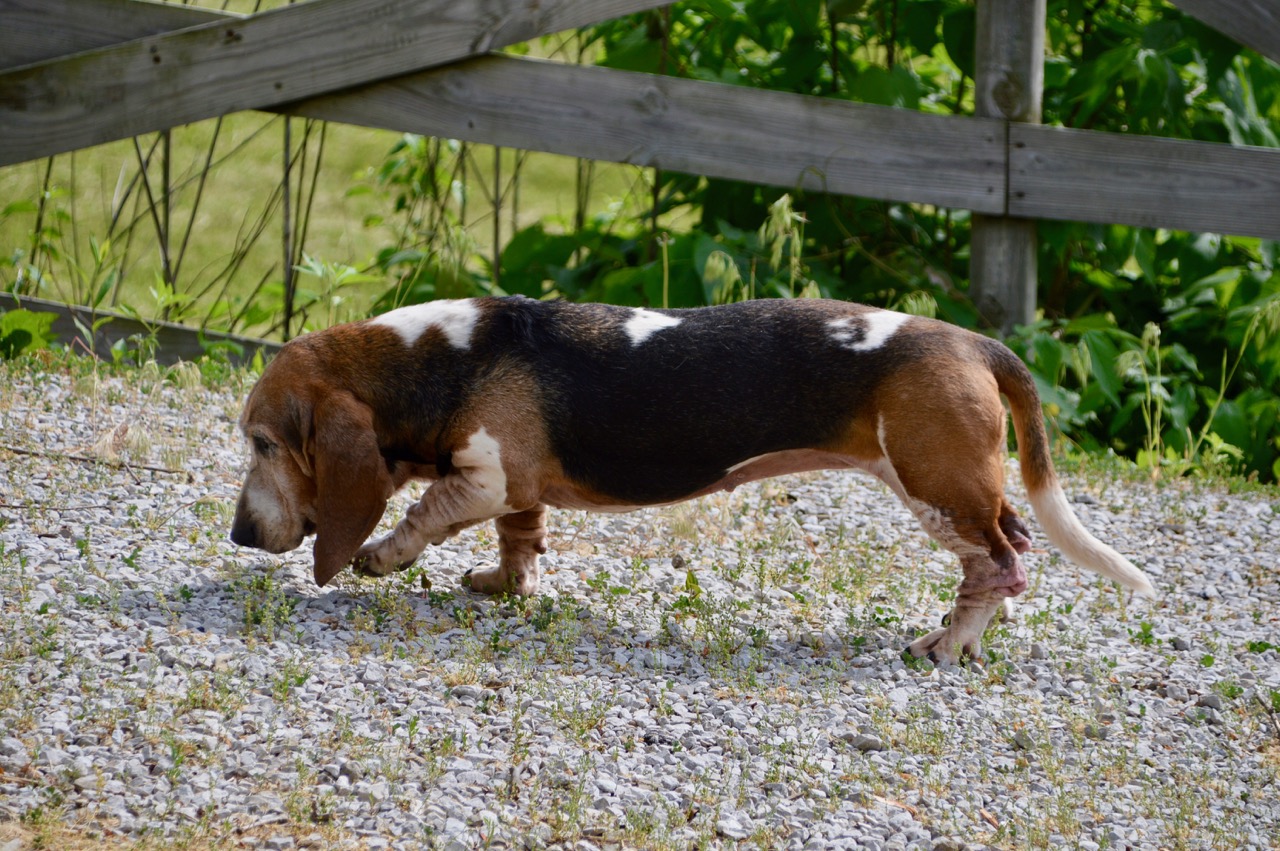 I could feel some afternoon plans forming in my brain cells this morning during and after our walk. They were plans from grocery shopping to a possible drive around the local countryside with my camera in hand. Yet that is one thing about being retired, plans can change in an instant and this afternoon they did.

After a nice phone conversation with a friend out west, it was time for lunch and I had a craving for small burritos/tacos on small corn tortillas. They are pretty basic but somewhat addicting, consisting of refried beans, chopped tomatoes, onions and cilantro, topped off with some salsa. They are so small you cannot wrap them like a burrito but fold them like a taco. 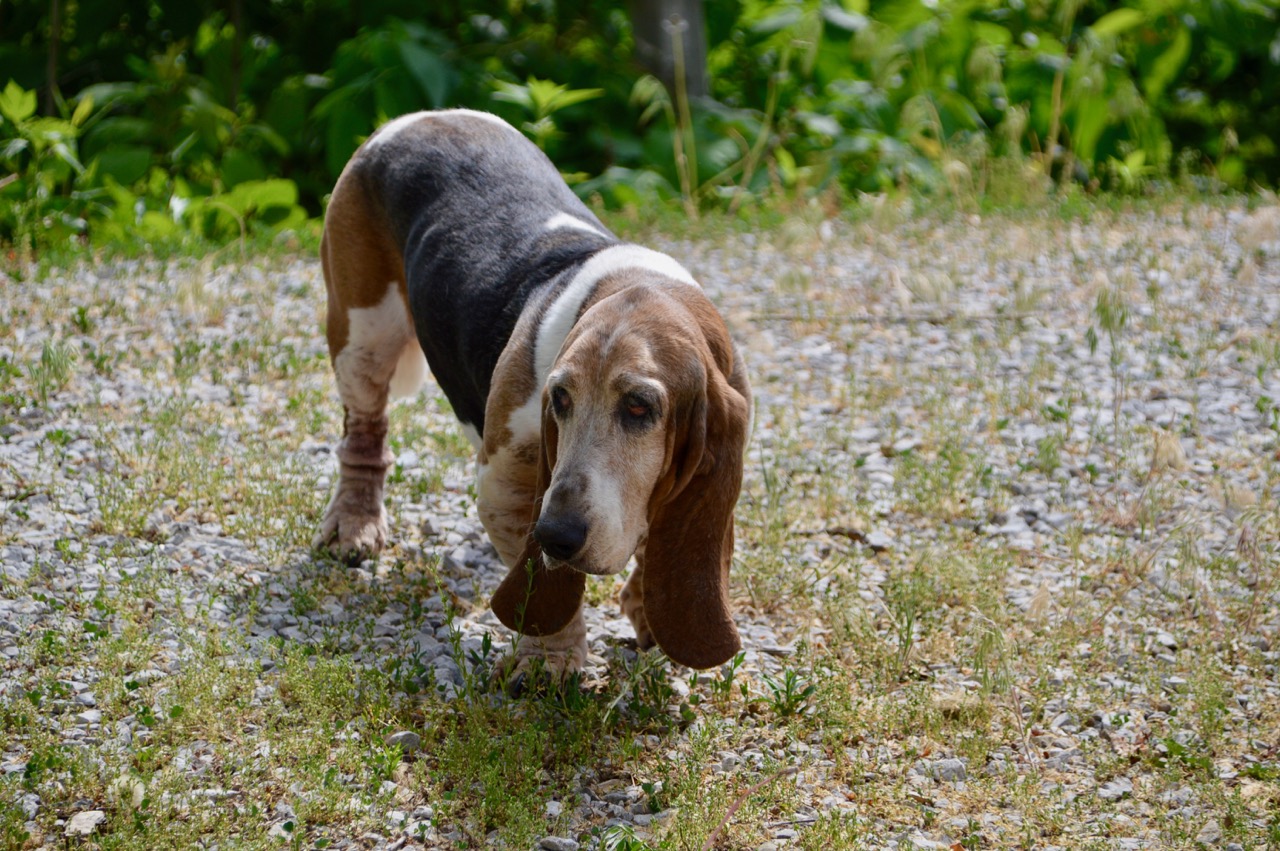 Small but evidently powerful ... I cannot think of any other reason that soon after I cleaned up the kitchen after that lunch I was down for the 10 count as they say. I staggered (not really) to bed for what I thought was a short siesta. A little over 3 hours later I found out those plans I had were no longer tentative but cancelled ones. All of the hounds were still asleep.

Grabbing some cold water to drink, trying to sort out my brain cells, Sadie and Heidi migrated to the door one by one. Heidi came outside just to relieve herself, looking like she might spend some time outside with us but looked almost as tired as I felt. She turned and headed for the door to go back inside.

By the time I had let her inside, Sadie had taken off into the field thinking we had started our afternoon walk. 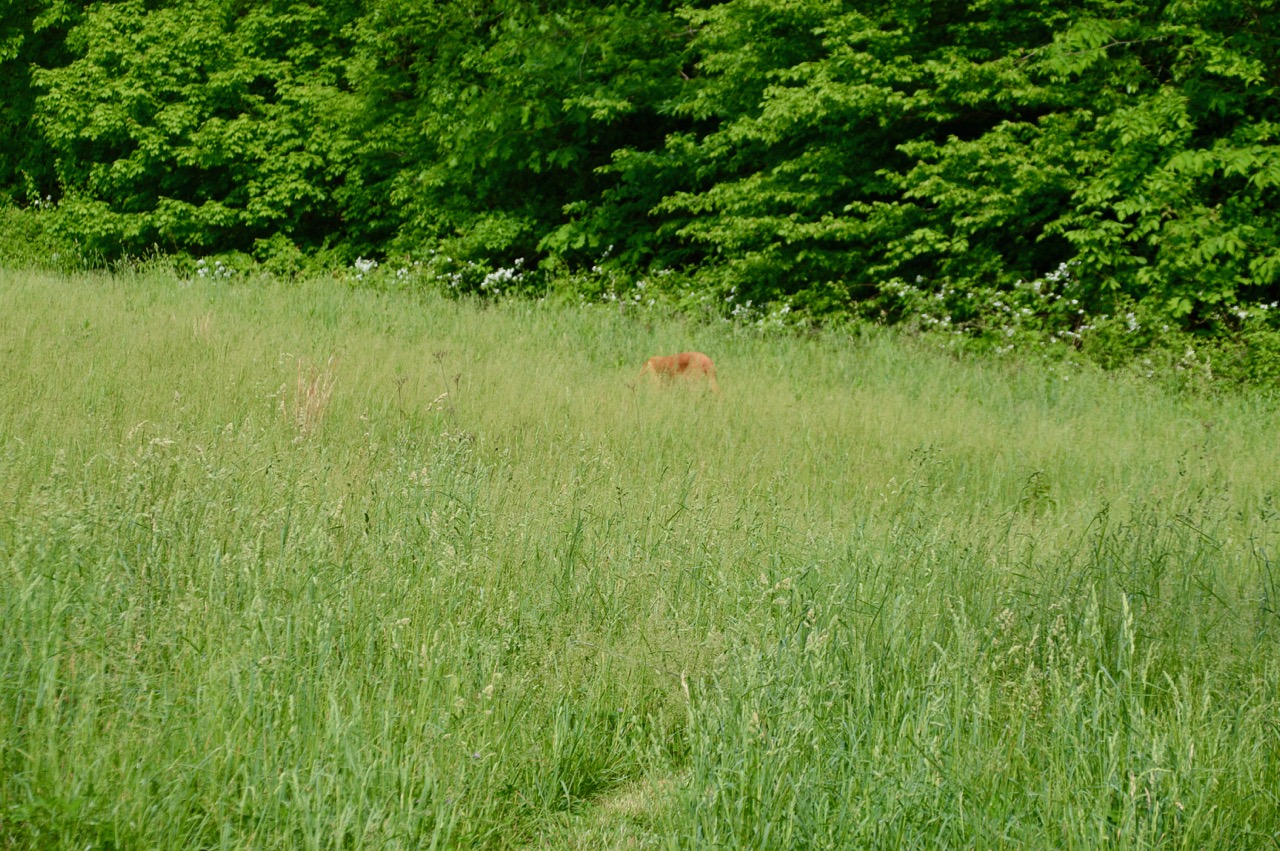 Stella was still back inside laying on the dog bed in the corner of the bedroom, filled with cool air. When she came outside she seemed just as dazed and confused as Heidi and I was, not sure what she wanted to do nor what we were going to do. 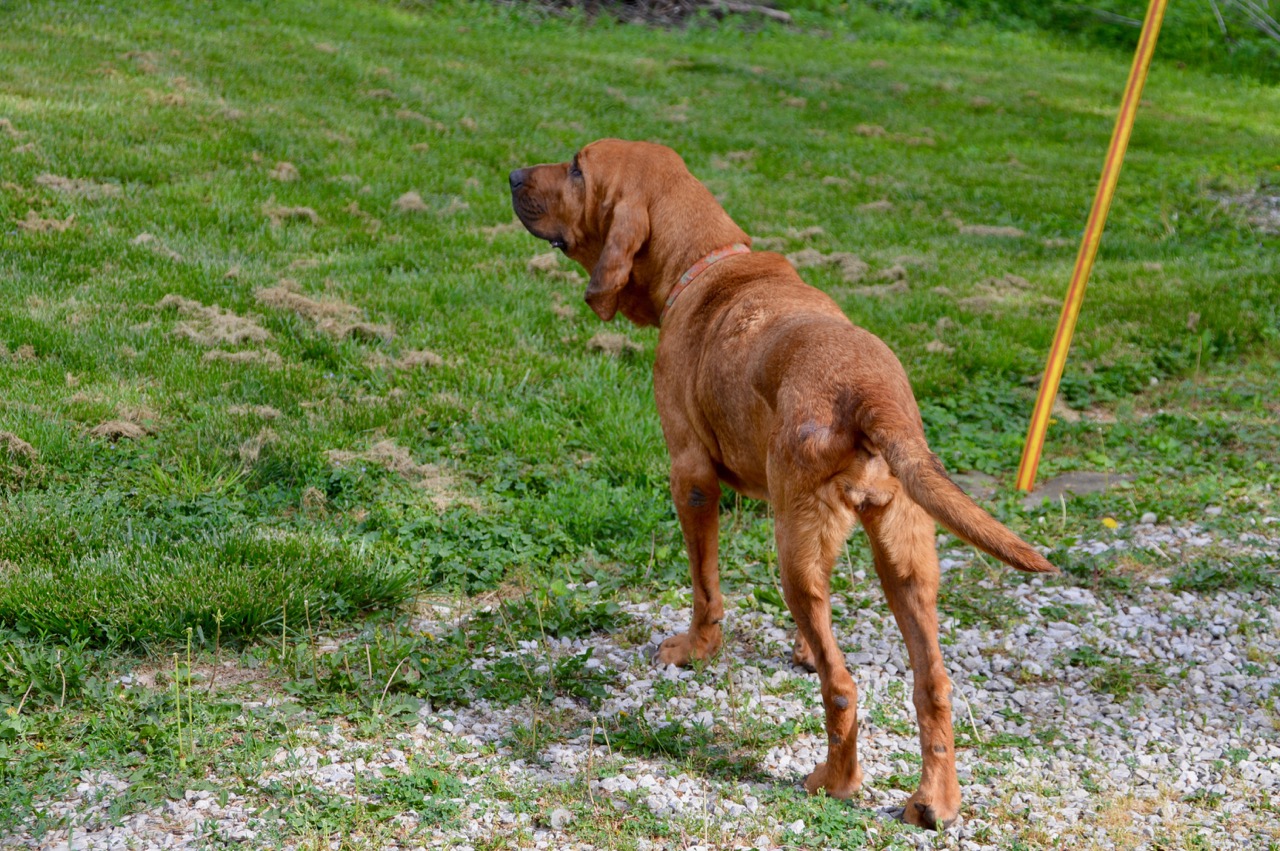 As I walked over to the shaded area of the Mahogany trees I yelled Sadie's name since I saw her nowhere in the field as far as I could see. Was the tall grass hiding her or was she in the woods? Stella was checking out something with her nose ... were one the neighbors cooking dinner. Her nose can pick up a meal a mile away. 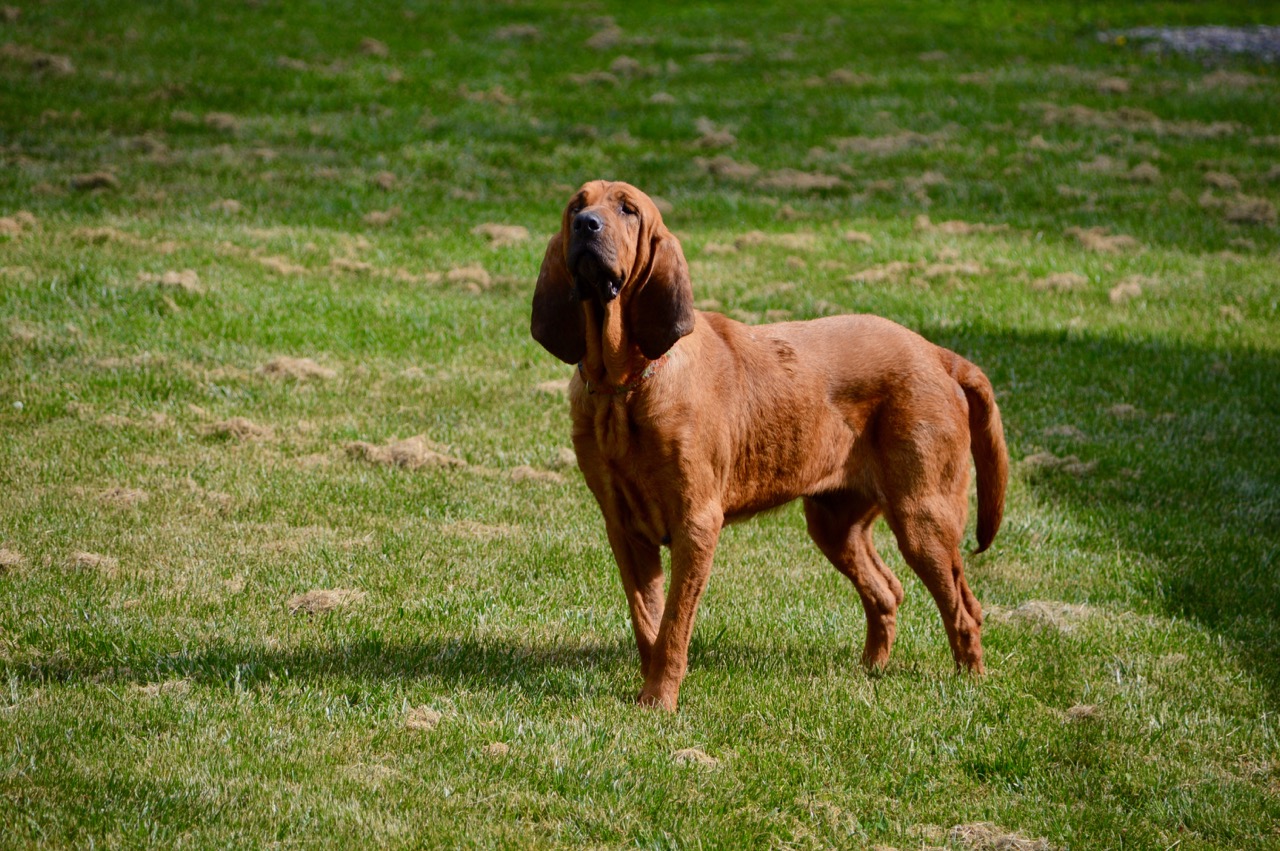 Out of nowhere as I was looking out into the field, Sadie came sprinting down the path into the yard but slightly confused when she didn't see me standing there. I was hiding between the two tree trucks where the squirrel had escaped yesterday morning. 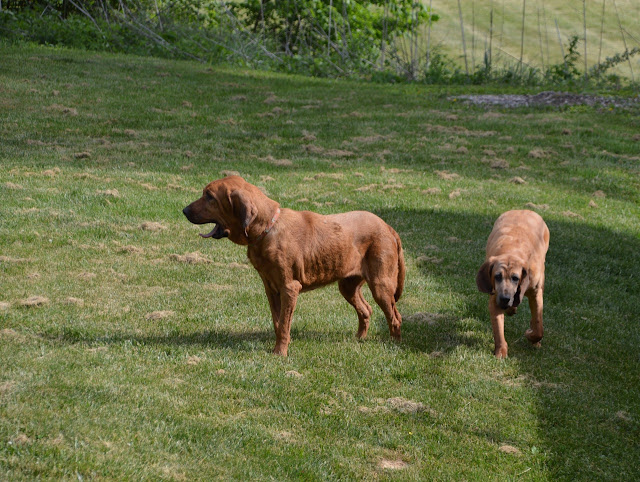 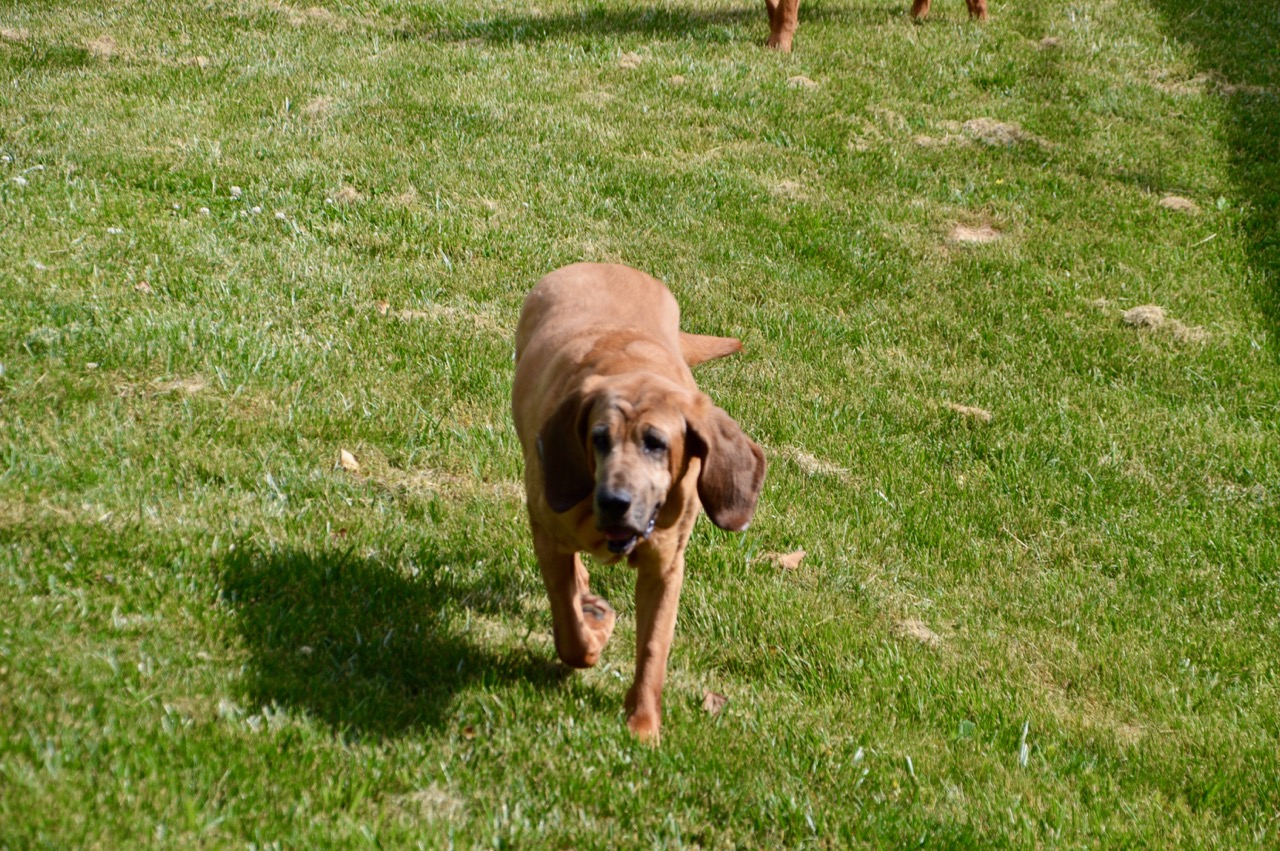 It was hot but that did not mean we couldn't take the afternoon walk now. I walked back inside to trade the camera for the retractable leash in case I needed to help Stella stay in the same direction as Sadie and I. Heidi had decided she had seen enough and had no plans of returning outside ... she was done for the day.

Long naps put me in a daze afterwards. It might seem like a wasted day but evidently 8 nights of "west coast baseball" played a toll on my sleeping habits. With games starting at 10:15pm local time I was already near the time I had been going to bed lately while getting up earlier than normal. Summers bring a change in sleep times.

I must admit the thought of blogging here or not did cross my mind. I have never been able to figure out that question or feeling. To me it's strange as I go back and forth in my head on whether to continue blogging while I've been blogging every afternoon now for 3 days in a row.

Since the rain never showed up again today ... I think I need a sundown drive in the Z4 to clear my head.

Somewhat tired but all is good in 'the tropics' of Southern Indiana.
at May 17, 2018
Email ThisBlogThis!Share to TwitterShare to FacebookShare to Pinterest
Labels: Heidi Hibernating, Sadie Tracking, Siesta, Stella's Freedom