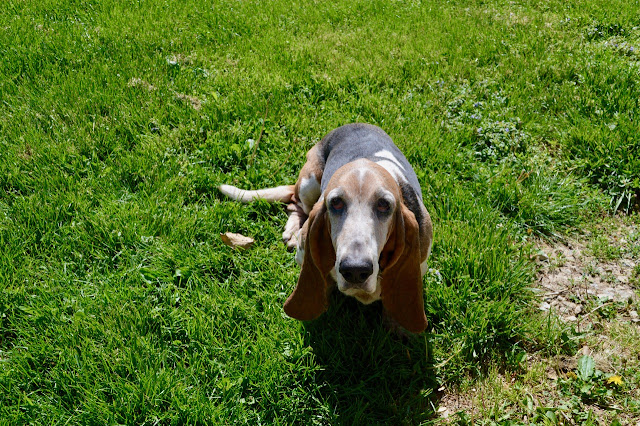 Wednesday afternoon I heard Heidi jump off the couch, run toward the kitchen barking. Very unlike her normal activity. I had no idea what was happening. I found out as we went outside that she wanted to go for a walk. How did I know that? 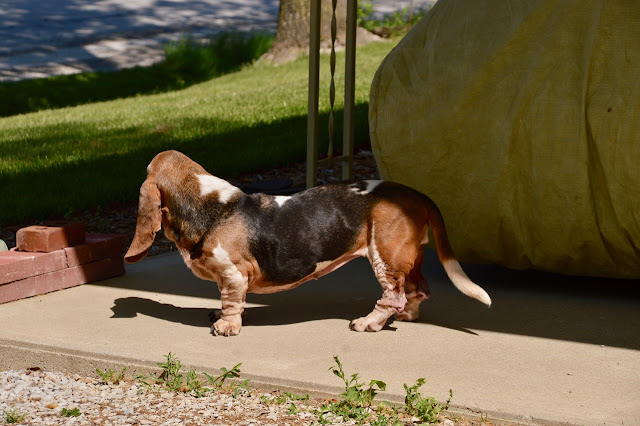 By the time the bloodhounds and I were in the yard, Heidi was already heading down the path out into the field. How strange was that? I didn't have to time to go back and get the camera to record that historic and strange event. She walked the half mile, leading some of the walk. After we returned home she slept the rest of the afternoon and evening.
So Thursday I was curious what she would do after lunch. As you will see, she and the bloodhounds did nothing because it was TOO HOT !!! 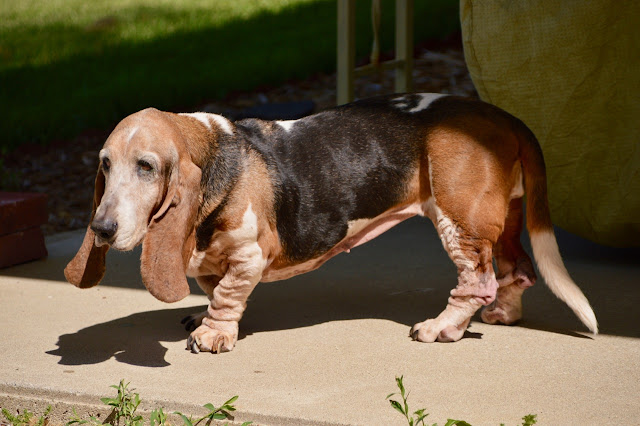 She stood and thought about her next move for a while, as did Stella ... but Stella already knows what she is going to do when it's above 80°. Plus with it being so soon after eating she knows there is only one thing to do ... take a nap. She dropped to the ground right where she stood. 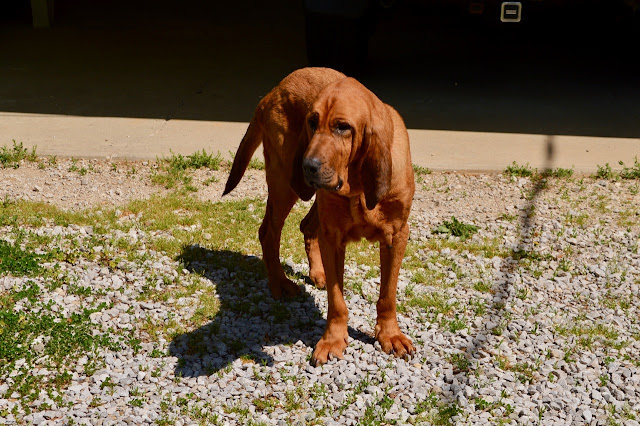 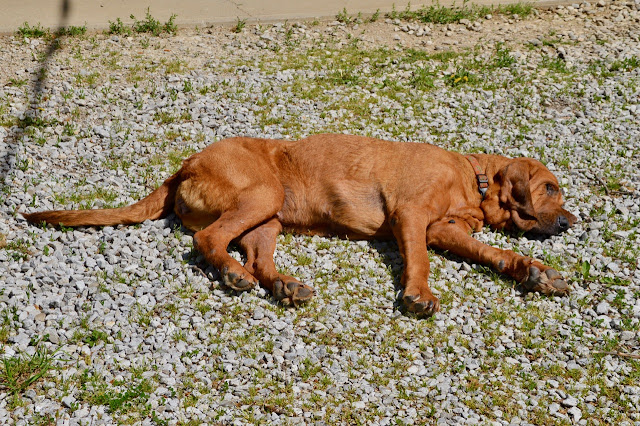 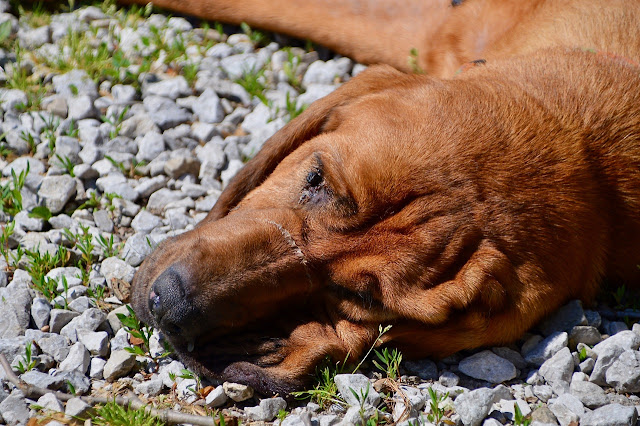 So far this summer Heidi has decided her spot will be right next to 'Winston's Patio' just on the edge of the grass. 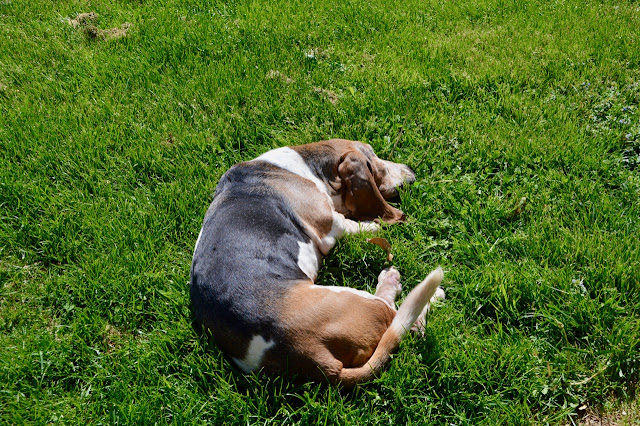 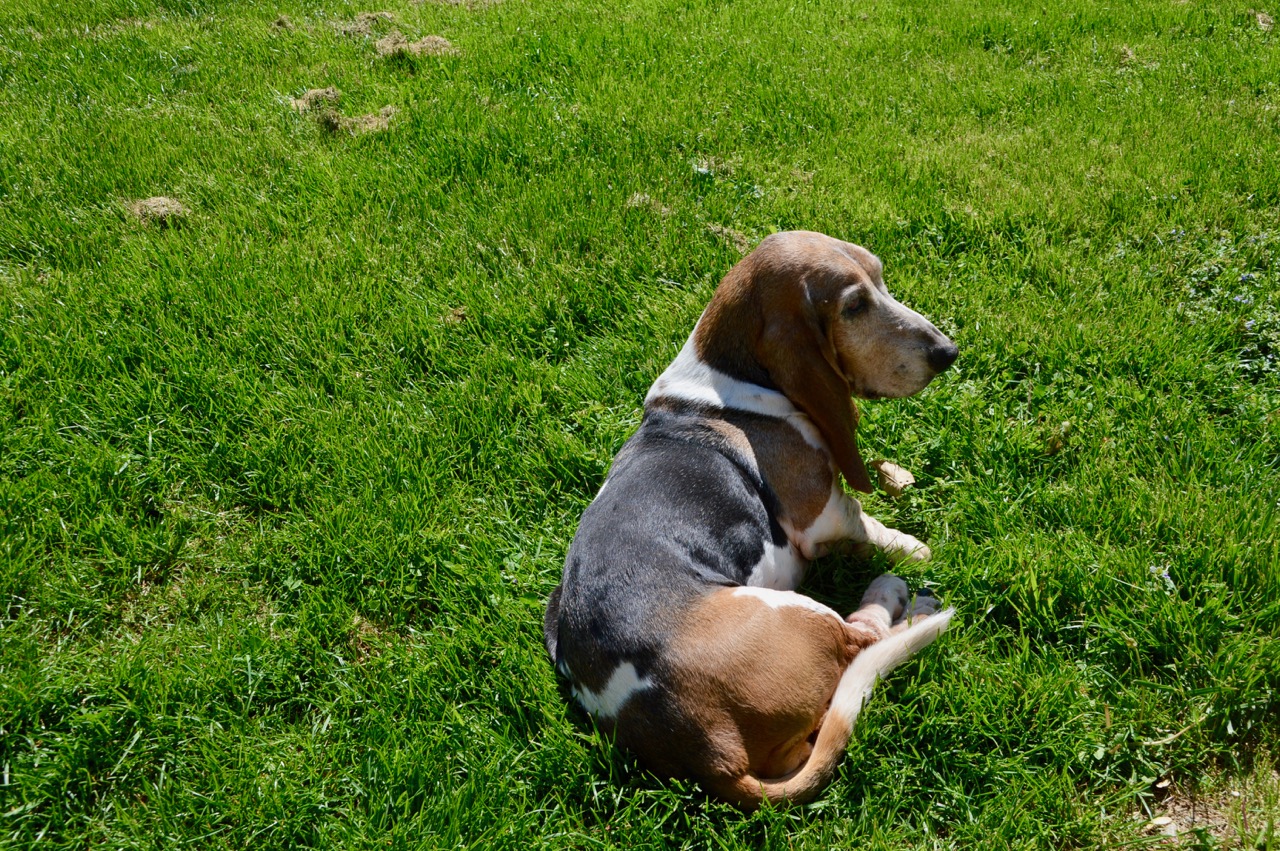 Meanwhile Sadie did what Sadie does ... she roams the field with no time to lay down and relax, no matter how hot it is. 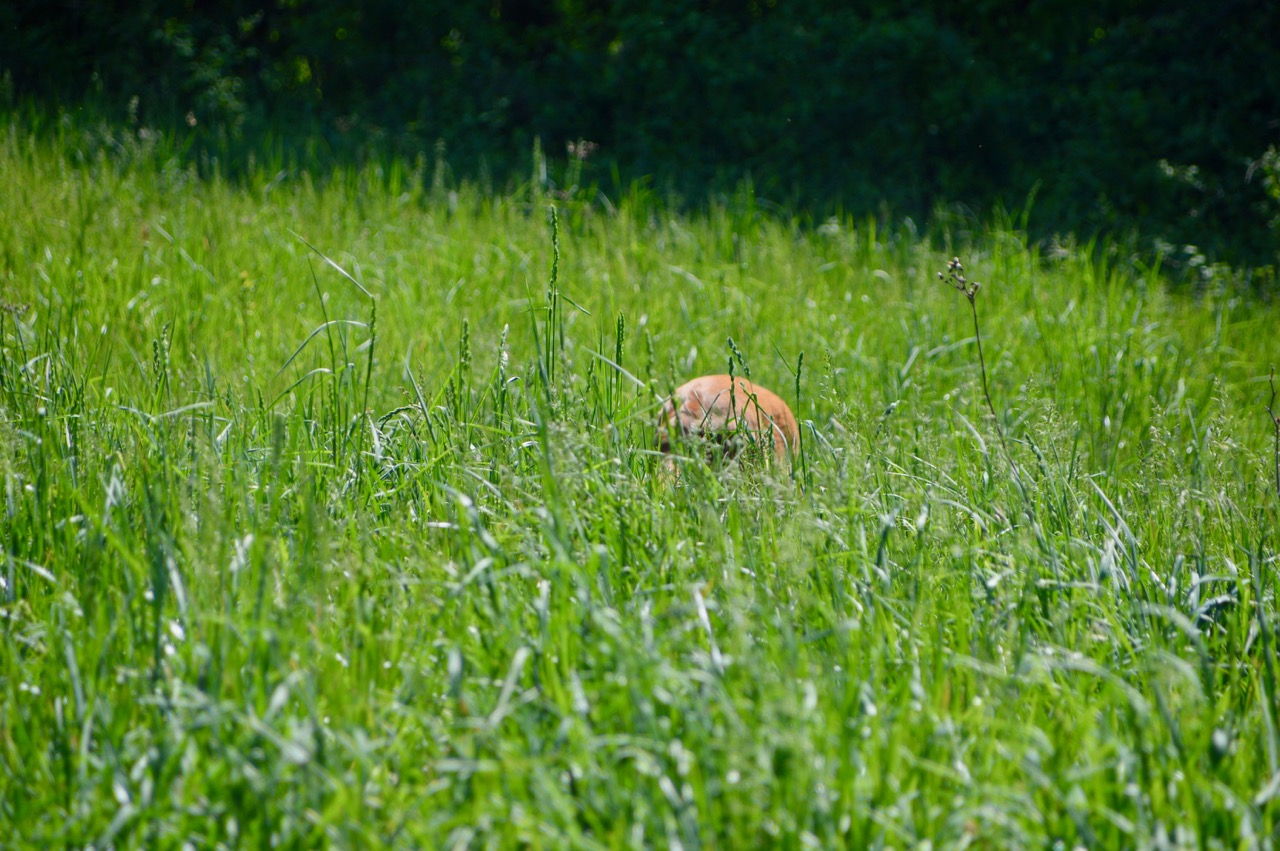 It wasn't long until I felt a little too hot as I deepened my tan ... or burn that is. As soon as all three hounds saw me putting the chair back into the corner and I was going back inside, they came running to the door ... I guess it was too hot for them also.
By late afternoon and after all three had a solid 2-3 hour nap I thought they might want to take a walk. I knew that Sadie and Stella would but what about Heidi? When I asked if she wanted to go, she hopped off the couch and with her tail wagging she headed to the door ... I grabbed the camera. 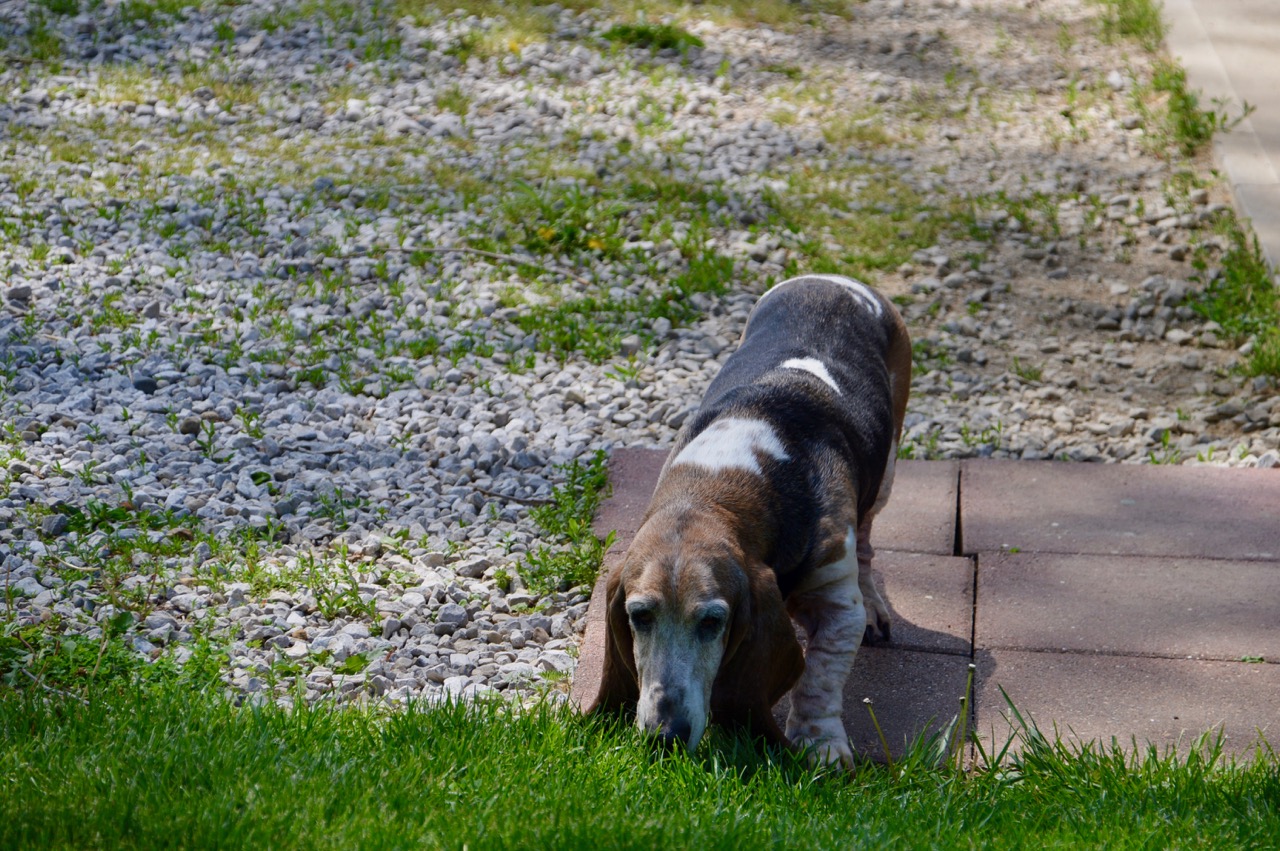 By the time she got to the yard she wasn't in the mood to take a walk and why would she? She went yesterday and besides I had my camera. 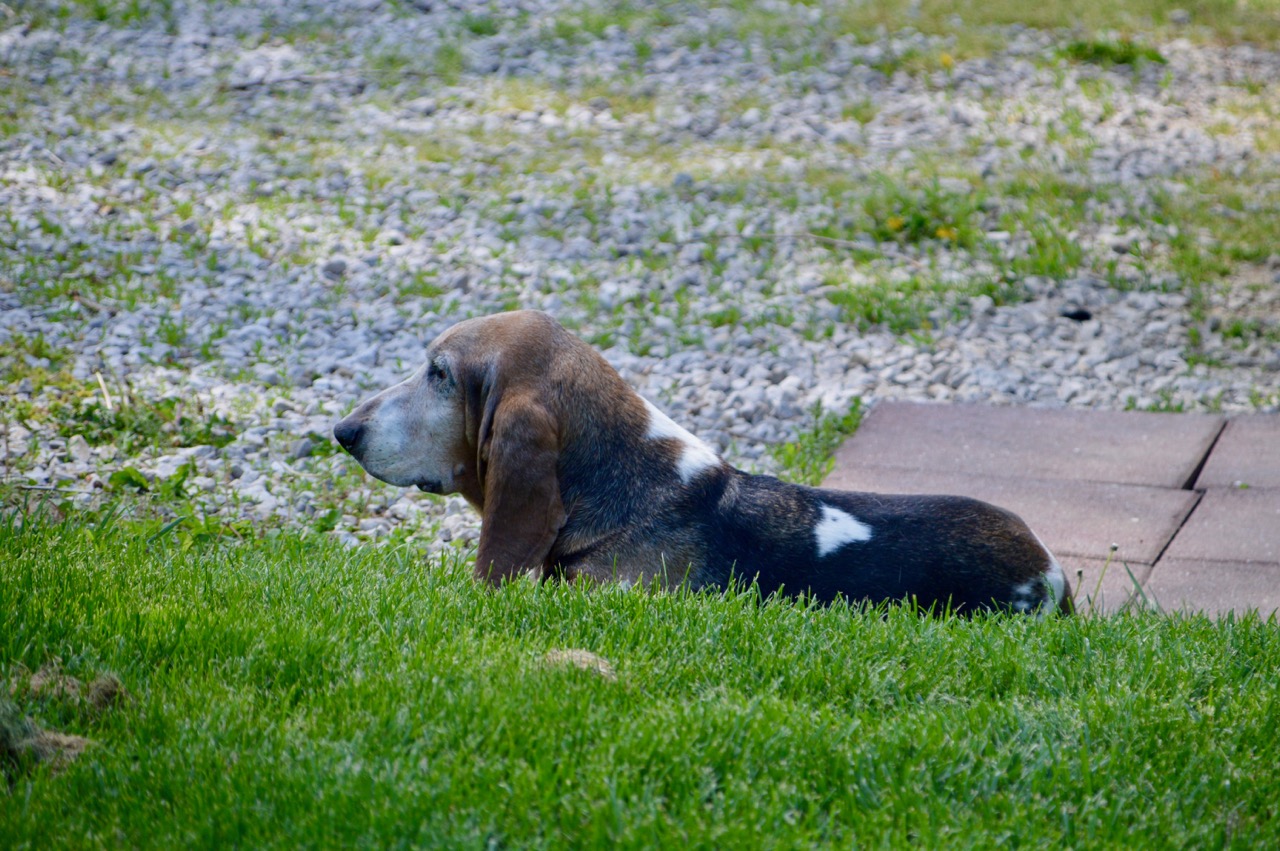 So the bloodhounds and I took off for a quick walk ... glancing back at her, she had already gotten up and was heading toward the bank. That seems to be her normal area while we walk when she is outside. 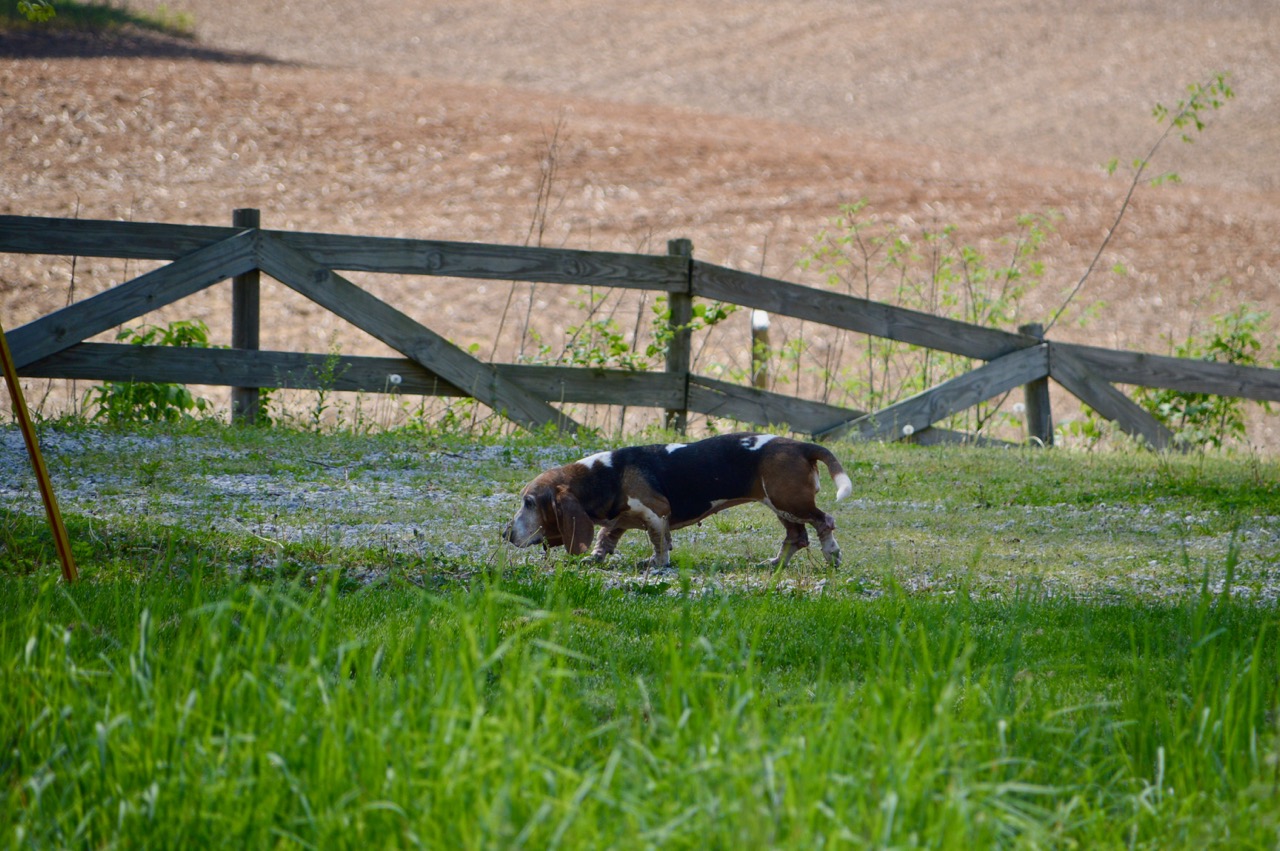 Stella immediately shifted down into her normal afternoon walking pace ... a little slower than slow. 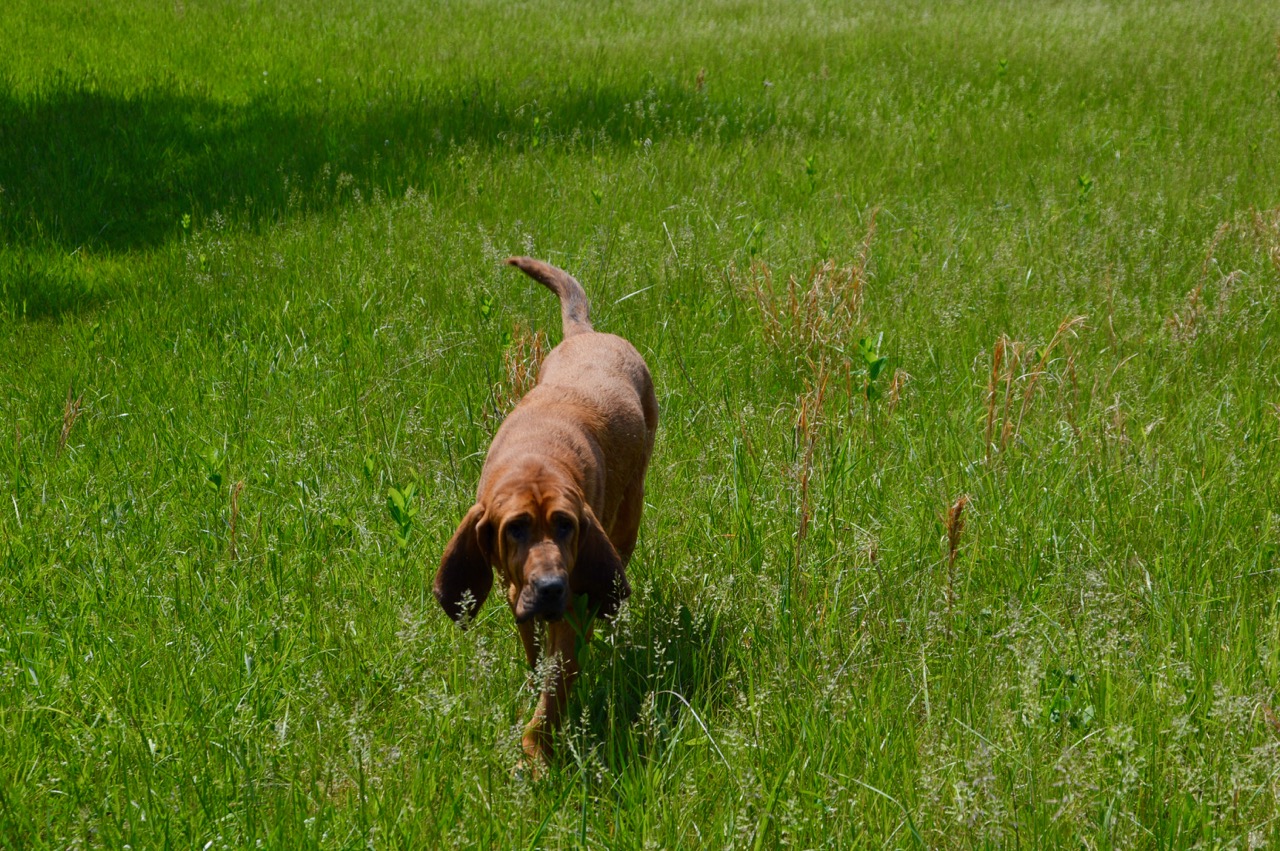 As we walked into the yard from the north, I could see Heidi almost at the path in the field at the edge of the yard. I thought she might go walking on her own ... but Sadie had other ideas. 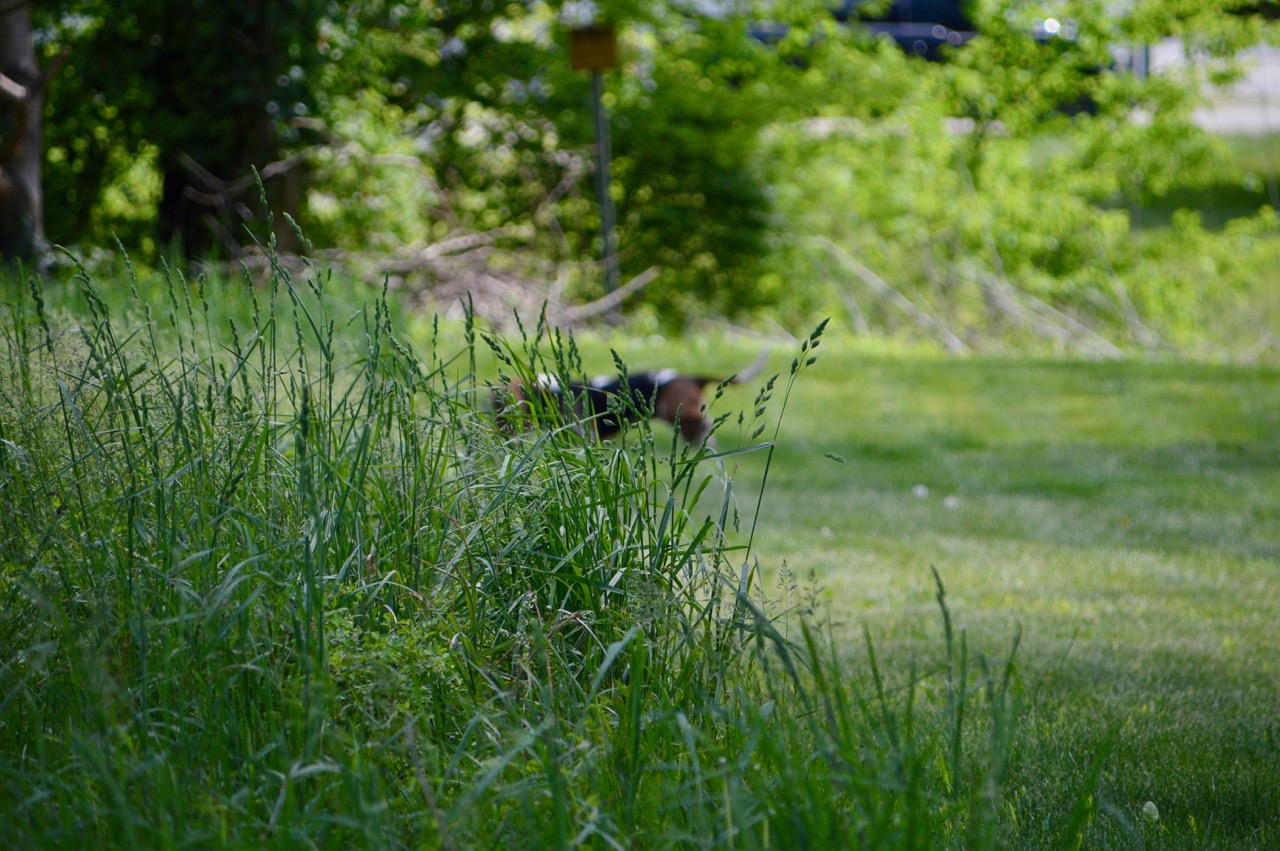 Once she saw Heidi was running toward us, Sadie started sprinting toward her to do her famous 'nose tap' that she does anytime that Heidi comes back inside the house ... I am guessing it is some sort of a greeting. 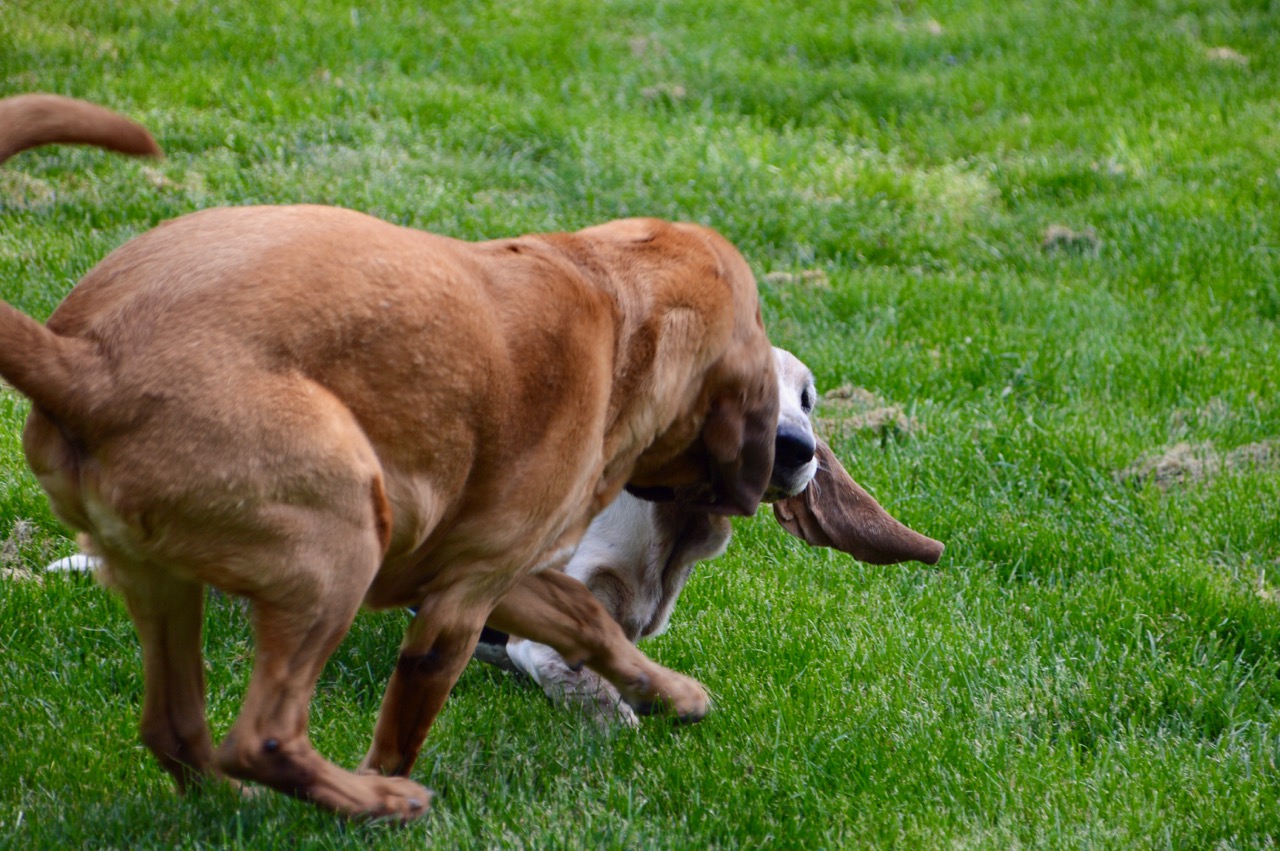 Within the second it took me to click the shutter again, Sadie had moved out of the picture and Heidi was regaining her balance from the 'nose tap'. You can tell by her stretched rear leg and flapping jowls she is not quite straightened out yet. 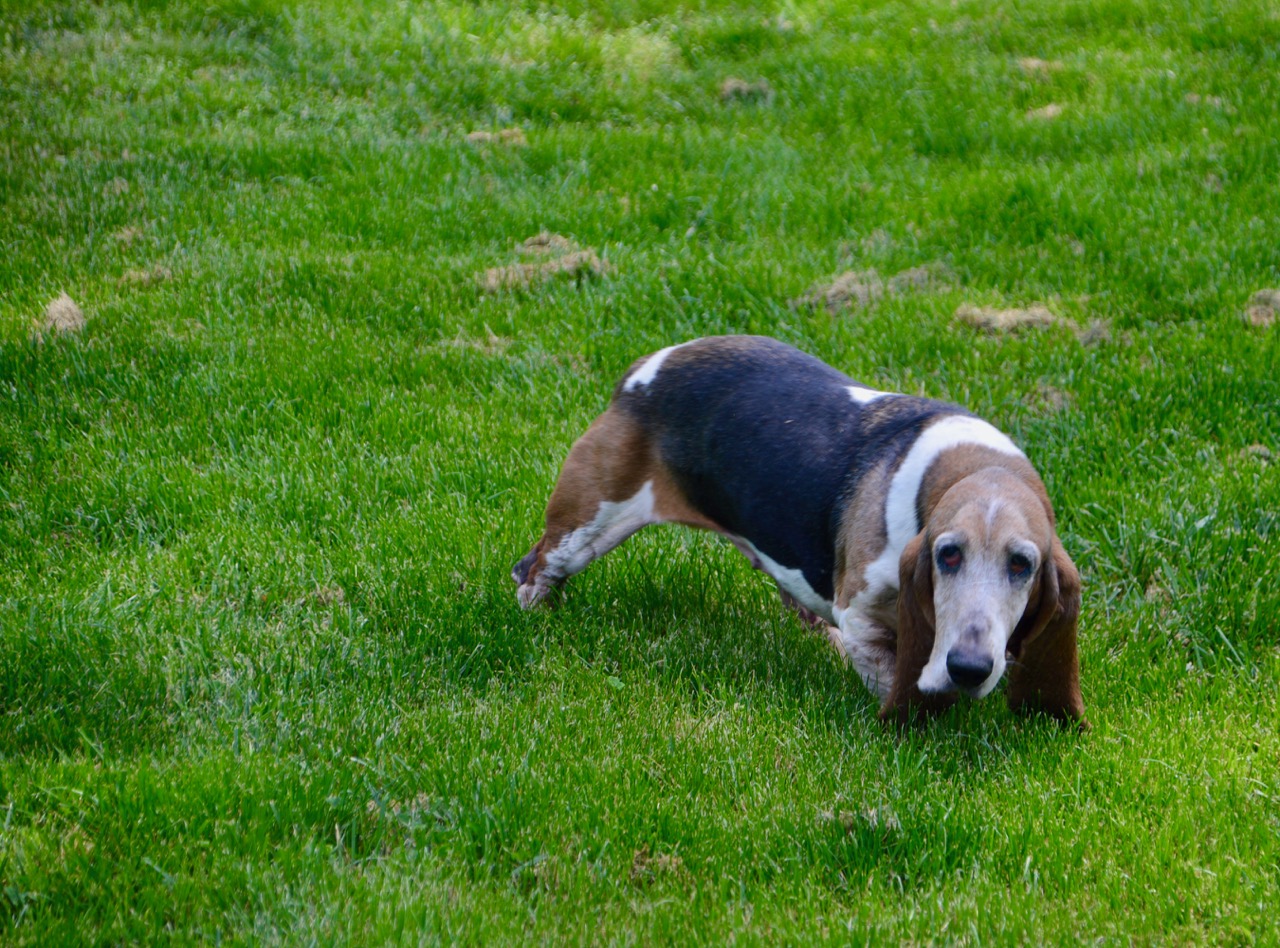 The temperature will continue to climb to the high 80's today and this weekend. With all of this warm weather Heidi's deposition has turned a 360 and is much more active than she was when it was colder than 50°.
By the time I return from visiting an old friend in Bloomington, it will be time to mow the yard again.
Hot weather is back and all of us are having fun in 'the tropics' of Southern Indiana.
at May 11, 2018
Email ThisBlogThis!Share to TwitterShare to FacebookShare to Pinterest
Labels: Heidi Walks, May Afternoons, Sadie's Nose Tap, Stella Naps