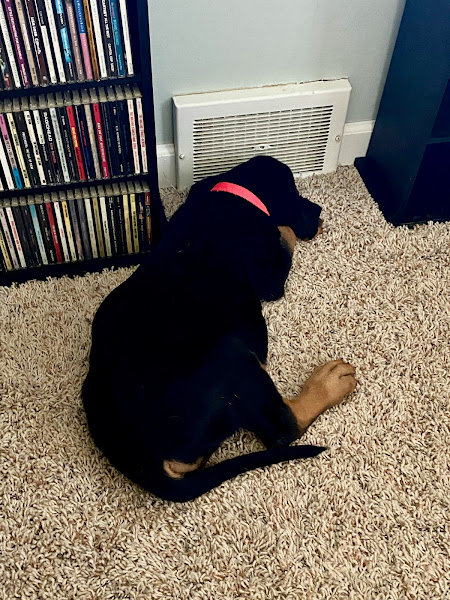 They may have updated their ranking on the official AKC site but many years ago they listed the Basset Hound and Bloodhound in the 70's of all breeds for being smart. I knew different even back in 1987 that was not accurate. Harry was more than smart and quite a problem solver. As you see Watson is blowing that ranking off the charts as he sleeps right in front of the register that is blowing out cold air from the central air system. I am not quite smart as he is, I have some videos below that I will need some expert advice on making them better. The longest one was almost 45Mb in size. Is there a way to compress the file before I upload it? 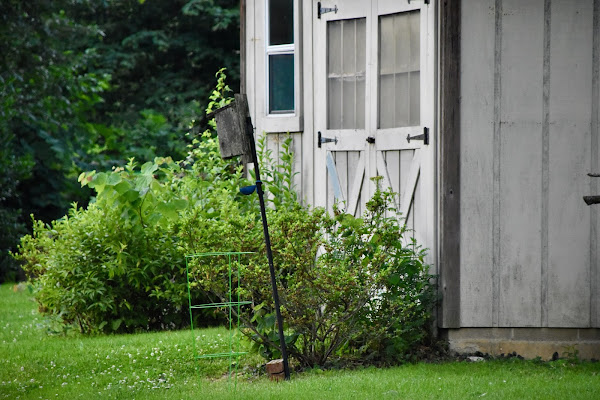 Day two of high activity started at 2am when I woke up to a bloodhound puppy howling. No finer sound at that time of day. I expected that the first night and didn't get it but I knew Watson needed to go outside. Walter was half asleep and was not amused as I turned on the light but Henry and Watson sprinted for the patio door to go outside in the dark. I turned on the patio light to match the bright security light next door. Watson ran across the patio deck and jumped into the yard. He already knew what grass was for before he got here. 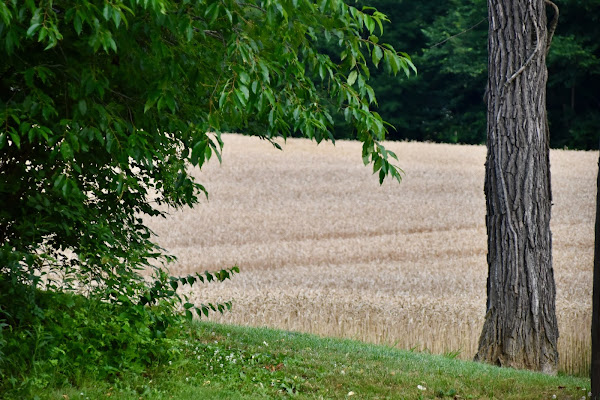 I am told the wheat will be cut soon. Then we will have a close entry so we can walk around the edge of the field. It will be a while before Watson can make the trek that far but Henry needs to burn off some energy every day and our neighborhood walk isn't far enough for him. 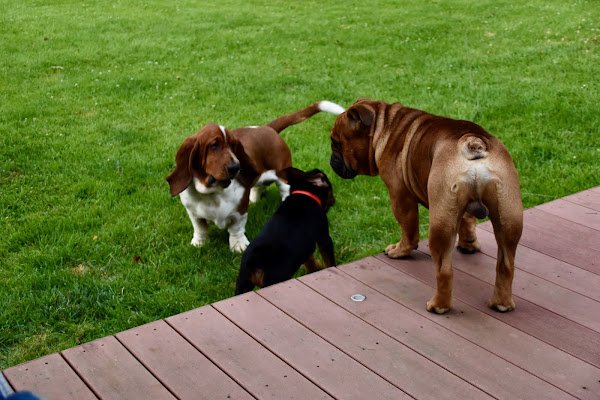 Some early morning confusion on who was eating where and out of what bowl of kibble. Of course Henry likes his food and the puppy food. Walter eats alone in the computer room but has decided this past week he is not that hungry. Is it the loss of Stella, his friend, that has made him a little less active this week? Watson decided he likes his food as I make the slow change to a brand I use. But he has also tried to take Henry's food. So currently feeding plans are still being sorted out.
That did not prevent them from immediately playing. It started on the kitchen floor and was moved outside. The early mornings are filled by the sounds of birds, every day. In fact when the temps are cool enough I sleep with the windows open and those birds are what wake Walter up first and he gets the rest of us up with the weirdest sounds ever heard out of a dog. It is a difference from the crying coyotes we use to hear. 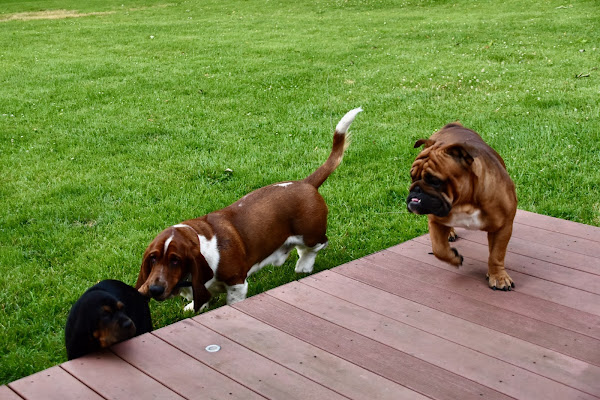 Some way during the move the settings on my camera changed, thus the dark photos even after editing them. I made the camera adjustment for brightness after I took these morning photos. I old pulled my old Tamron 18-200mm lens out of its box and used it this morning. It has the perfect range for these kind of photos.
I am now sitting in complete silence as the "hounds and the dog" are sound to sleep at 6:42am after a lot of playing.
There is one thing I like already about Watson. When he is tired will walk off into a different room if that is where he wants to sleep. He doesn't have to be right next to a person or a dog. That was evident last night when my old friends came over to see the new puppy. While we were talking on the patio, the hounds and the dog walked inside and went to sleep. 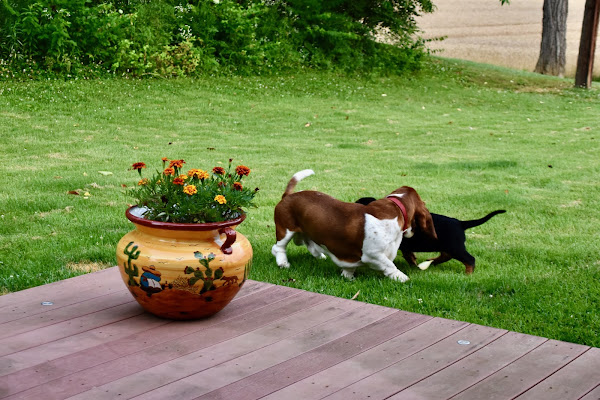 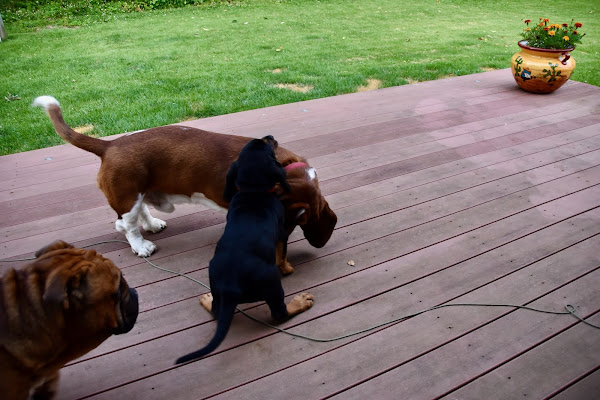 While Henry's specialty in wrestling has always been going for the achilles tendon of Walter, Stella and now Watson ... Watson's focus is on grabbing a tail and yanking it trying to get the heavy basset hound to move. With that specialty Walter will be safe for sure since he does not have any of his tail longer than his body. No, I did not have it cut it came that way. 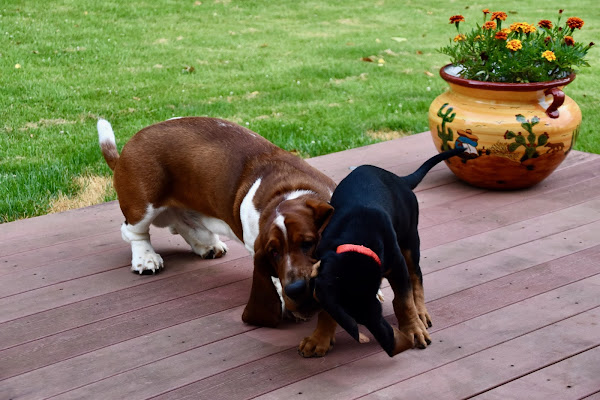 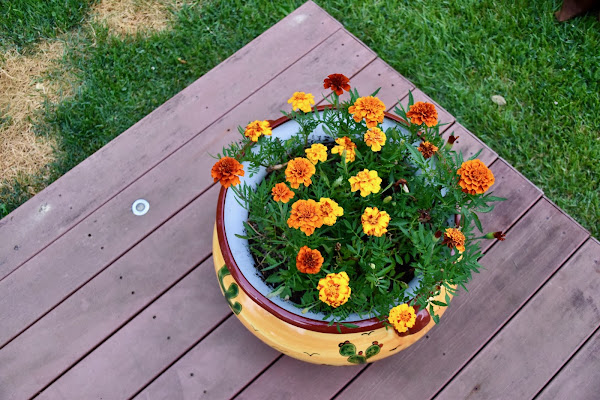 Not bad for starting as those small starter plants for a $1.25 each.
Below is my first attempts at loading videos into the blog. Something doesn't look right. 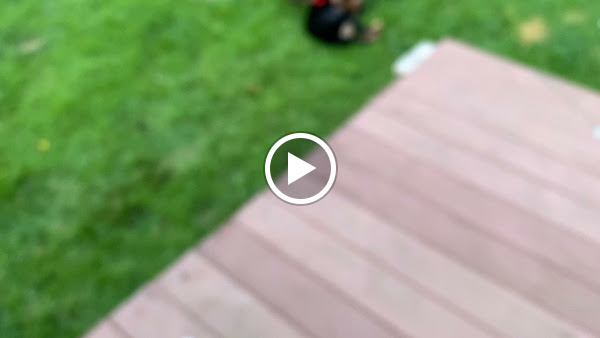 Then I realized I loaded them wrong ... let's see what this does.
I have been hit hard right now ... it was a week ago at this time I was in the kitchen making coffee, not knowing that Stella was waiting for me in the computer room. For the first time since I got her in August 2015 she did not follow me into the kitchen to be let outside and then to eat breakfast. Her last few days it did change a little as she did not stand up when the other three of us got up to go outside and then fix dog food in the mud room. She would always show up a few minutes later to eat as usual. But not last Saturday. THAT is when I knew she was having problems. THAT was when I knew she was letting me know it was time, just like Heidi did last December. The way she looked at me confirmed it.
I have a couple of dog lovers that I have known before the blogging days. They both believe that Stella led me to Watson, just like they believed that Winston led me to choose Henry last summer. I am not sure about that. I do know that with every response there has to be a trigger point to put you in motion. Whether that is from the sub-conscious mind or what my friends believe, I don't know. 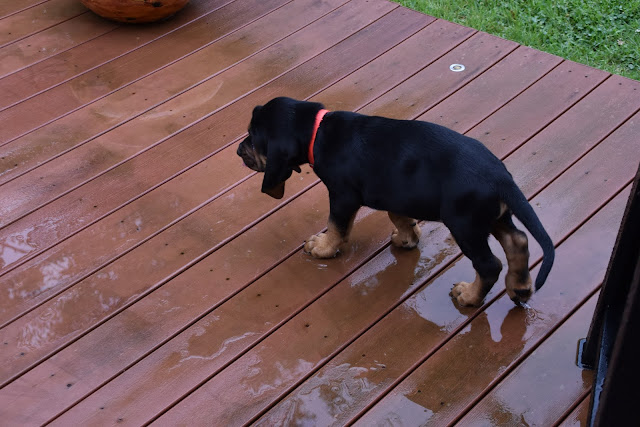 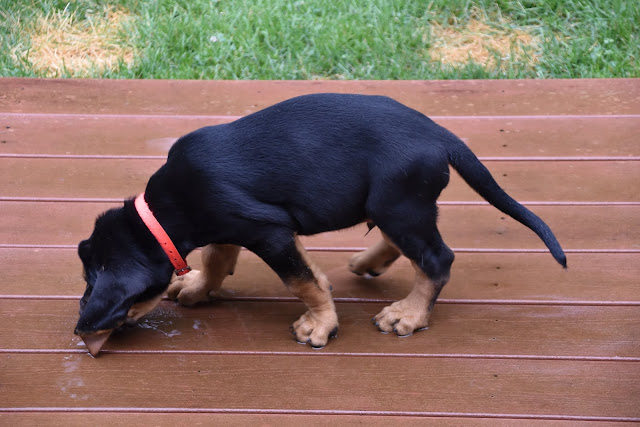 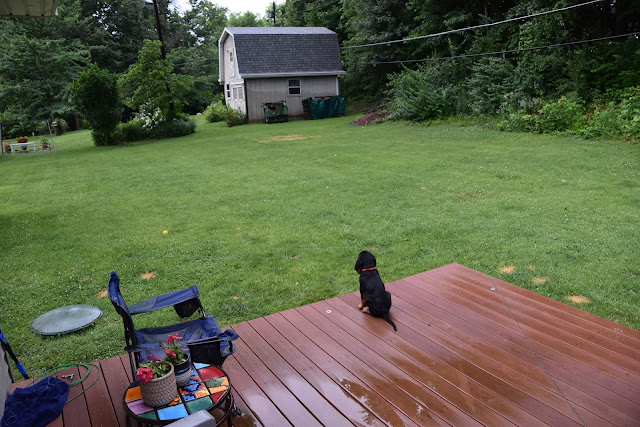 He does like to sit and look at things before he goes exploring. I am sure that will change once he gets older and his nose gets stronger. I am looking at different fence options. 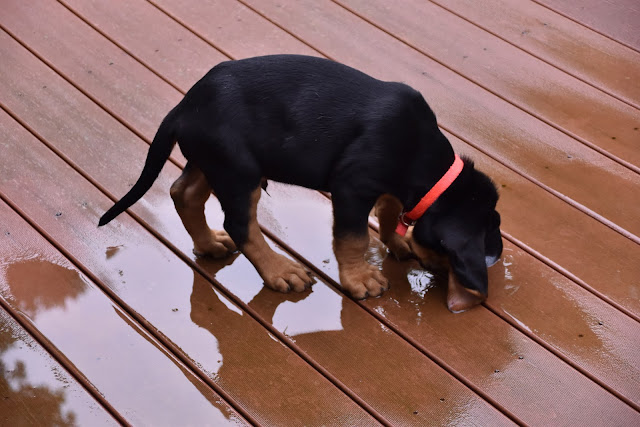 For the first time in a week the sunshine was not out this morning. As I clicked on the Wunderground weather site to see what was going on, the hardest rain yet showed up. Henry and Watson woke up and ran to the patio screen door and watched their patio deck become drenched. Looks like I will not have to water my new grass today and Watson showed no signs of not like rain. 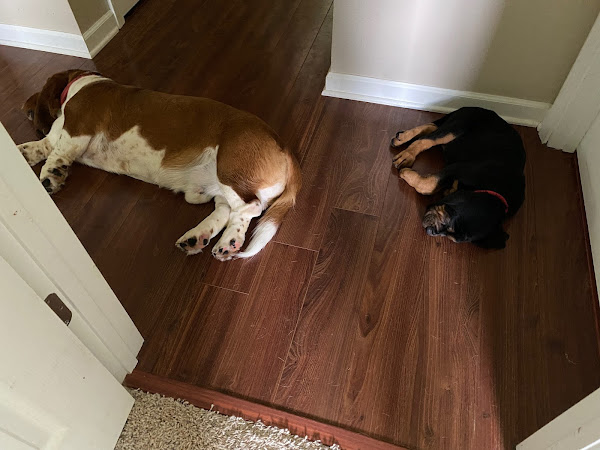 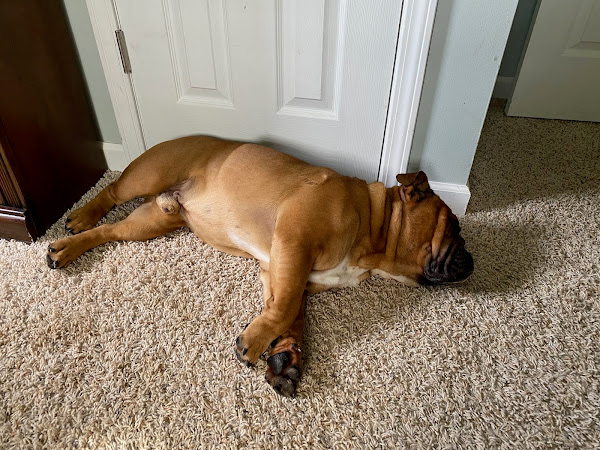 They went outside when the rains stopped and played again just hours after their early morning exercise. It wasn't long before the humidity kicked up a notch and all three were out for the count. At this point in time Watson is doing very well on his house training and has yet to make a mistake inside. 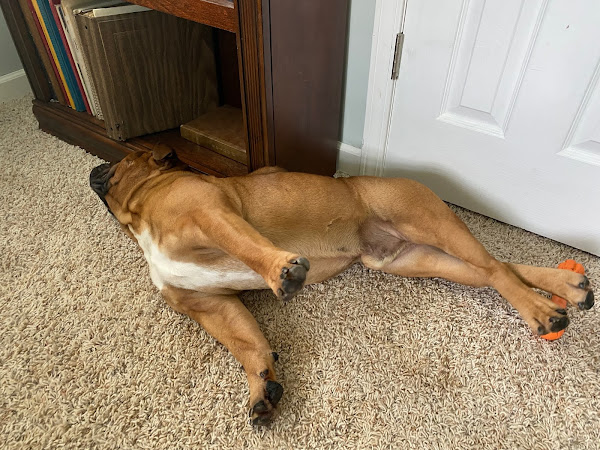 For the second morning in a row I shut the door of the computer room and wrestled with Walter. He is really getting strong and loves it the rougher it gets. I always have to tell him "stop" and hold my hands up before he will quit. He loves to play and since Henry has claimed the puppy as his, he has not played with Walter since the new arrival. I am not sure that Walter cares about that because he loves our wrestling sessions. That will be a daily thing now. He is stretching to get a little bit more comfortable before nap #3. 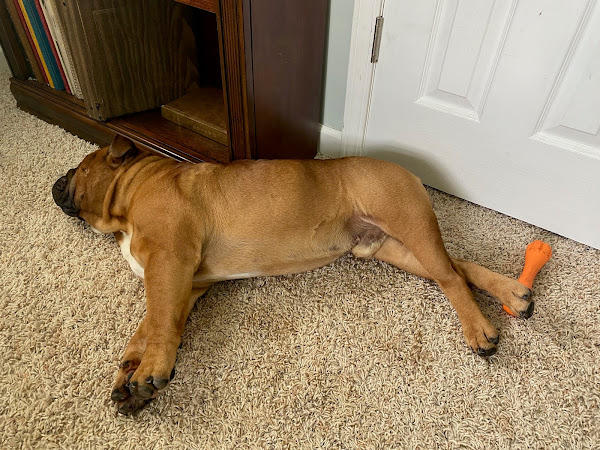 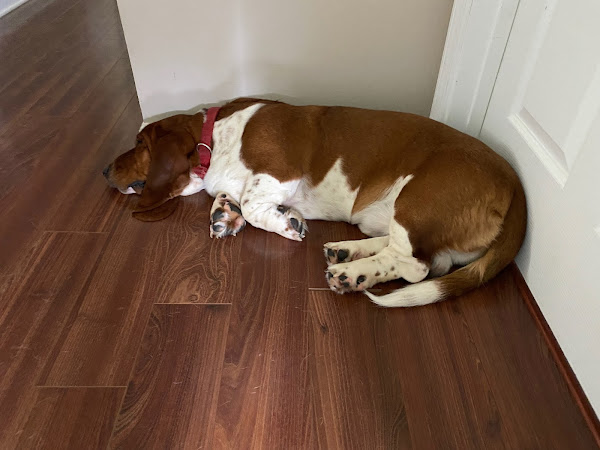 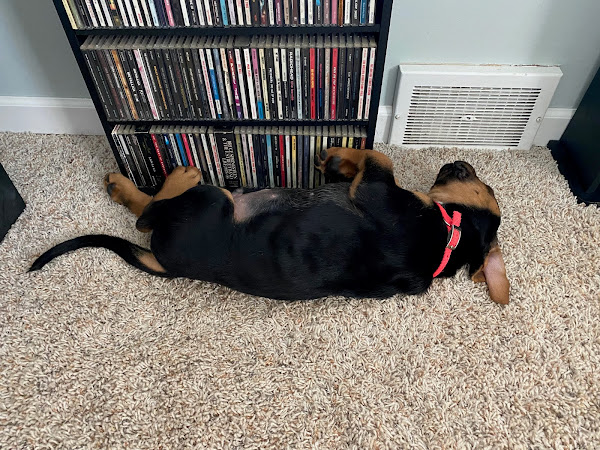 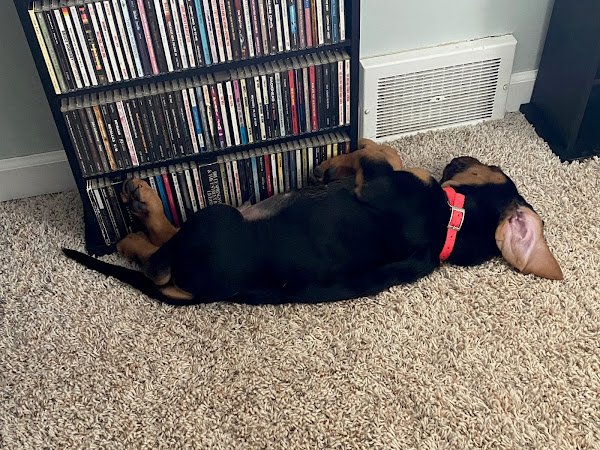 Watson has claimed his as his spot, right in front of the air register.
The sun finally came out later in the morning which was a surprise. Neighbors on both sides of me were mowing their yards with the grass slightly wet. I mowed mine Wednesday afternoon when it was hot and sunny. I took a little time with Watson on his own outside. I need to work on some drills with him that were given to me by the breeders. They are things he was doing as part of his training just for obedience. Watson is passing with flying colors.
Someone told me today "if it felt right it wasn't too soon", after I asked her if it was too soon after losing Stella to get a new puppy. It has felt right since the time I told the breeder "I will take that one".
Henry barked at the neighbors for the first time today as we were on that side of the yard. She decided that Henry was protecting the puppy as his based on how he was acting. Imagine that, Henry a protective dad.
A good day with the new puppy here in "the tropics" of Southern Indiana.
at June 19, 2021