Walter Decides To Have Some Fun 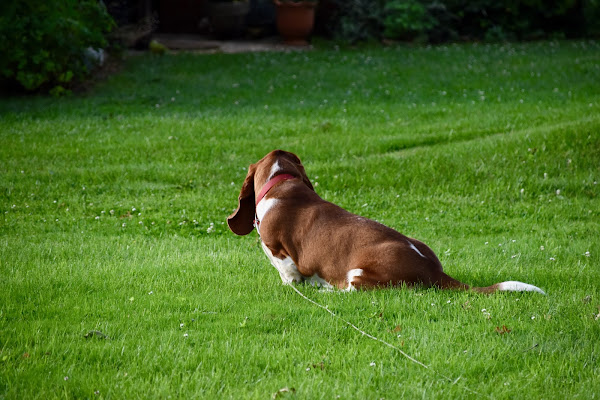 Walter let us sleep a little longer this morning so our day didn't start until a little after 6am. They headed outside this morning all unleashed. I could tell with Henry chasing birds on the ground that he was going to have to be tethered but I was going to wait and see what Watson did. When I came back outside after getting my camera and the card that was still in the computer, I saw Henry looking at something but I didn't see Watson. 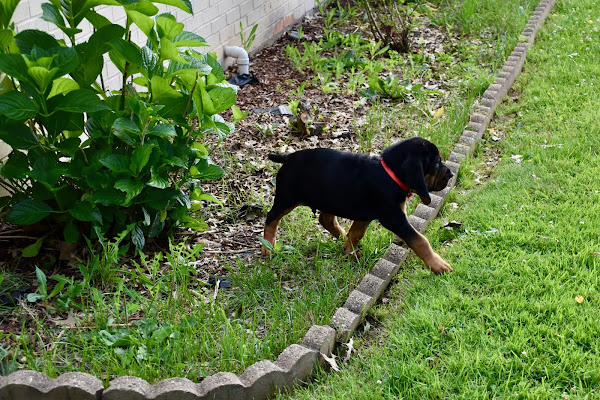 That's because he had used the soon to be revamped flowerbed for his poop area. When I called his name, he came running with Henry following. Henry can't go anywhere without his new puppy. So far Watson was doing very well off leash but that is more of a convenience for me than training for him. In this area a bloodhound off leash will not work ... too may people walking by with their smaller dogs that the hounds and the dog want to meet, along with one or two regular trucks driving by too fast. 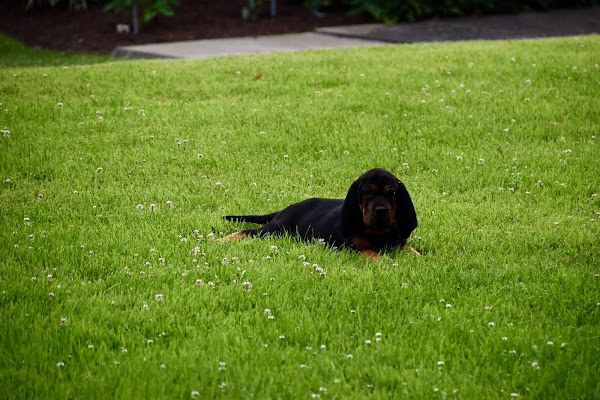 Yet, it is always good to see him just kicking back in the yard like Stella use to. He does this a lot after playing. I am sure that will follow him as he gets older. He is growing by the hour ... and I could see this morning he was a lot taller than last Thursday. Being retired will make it much easier to train a bloodhound than it was with Bertha and later Sadie, since was spending too much time at work during time. 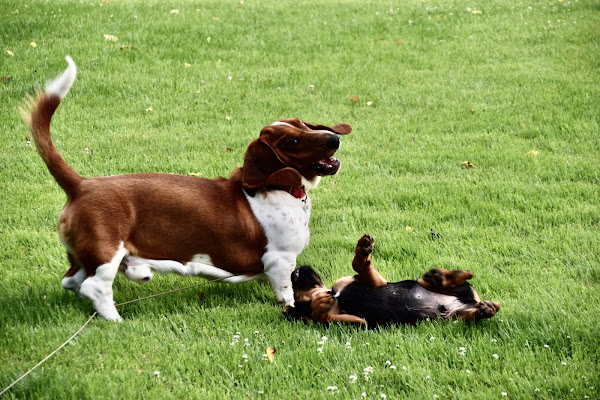 As he gets bigger, Watson is starting to be on the offense in these playing sessions. A few times Henry has been asleep or trying to sleep until Watson jumped on him and biting his ears. They love to play with each other and if they are awake that is usually what they are doing besides eating. 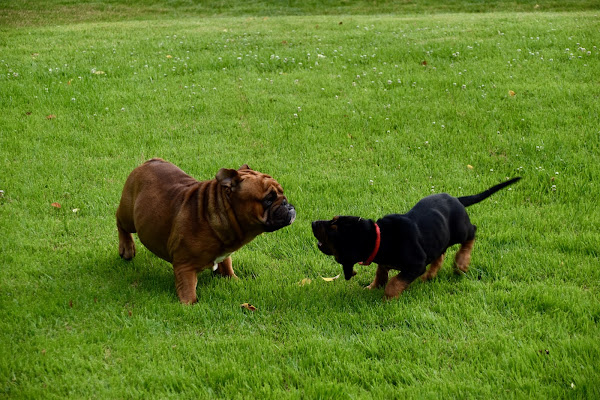 It was a shock this morning to see Walter run past me and jump off the patio deck with one thing in mind ... he wanted to play with Watson. I will let the photos show you his speed and agility as an english bulldog. 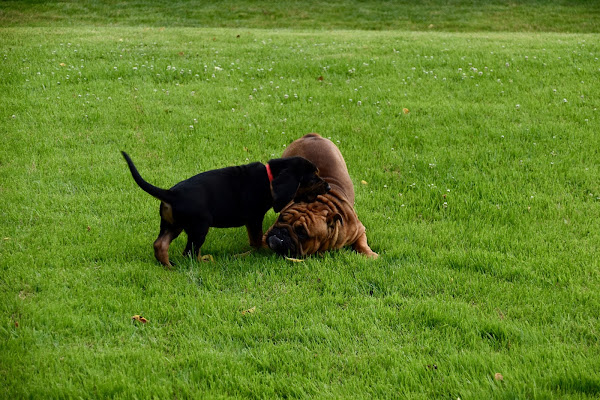 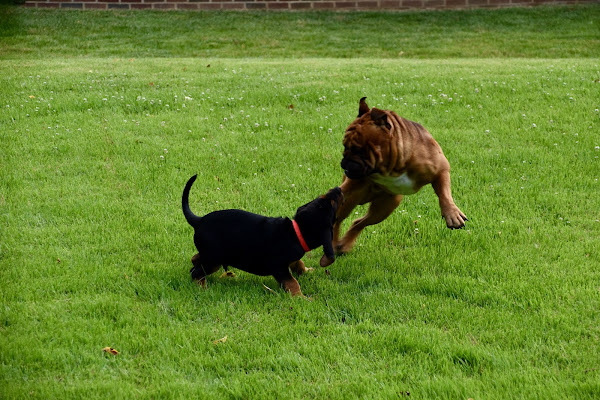 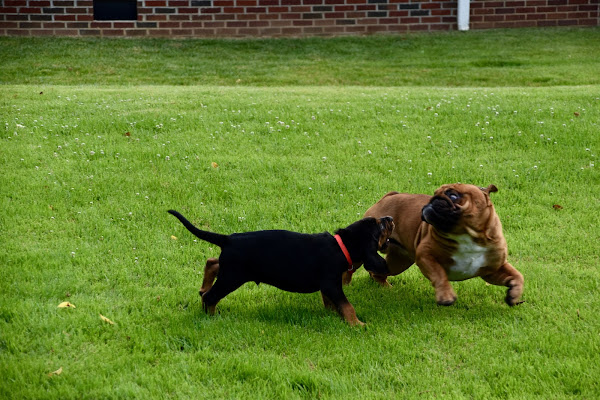 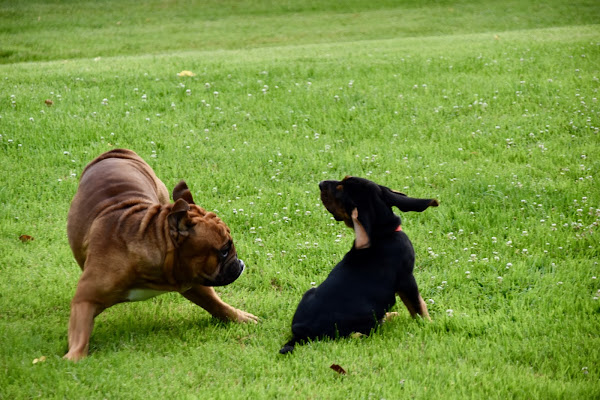 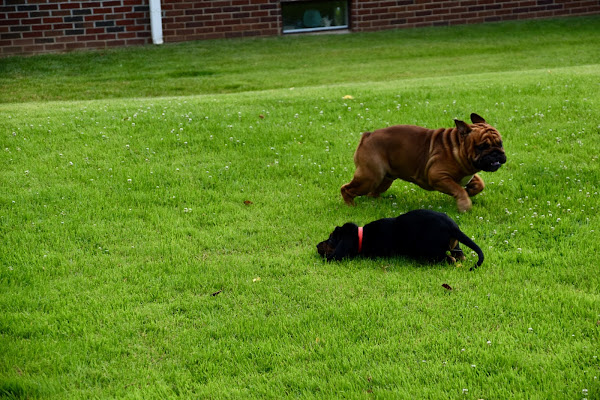 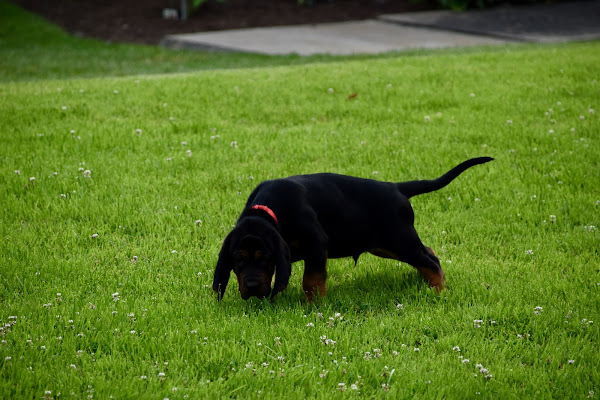 This is always an encouraging pose when housebreaking a bloodhound. It was going to be a big day for Watson today around noon. After the ladies at Southwestern Indiana Land & Title Co saw him on Facebook they wanted to have him stop by for a visit. The staff all came out of their offices last time to see Stella, Water and Henry soon after we moved here. They are all dog lovers and didn't mind the occasional drool from the hounds that were excited about all the attention they were getting, plus the treats. Walter had his first ride in the Mini Cooper.
To say they were excited seeing Watson would be an understatement. We walked into the lobby of the office with the leash on and turned him loose with 5-6 women waiting to see him. I stood and watched, talked and listened as they took videos and photos of him. He was spectacular and shocked me when he turned and walked to the door wanting out. I open the door and then the second door as he headed to the grass where he stood and peed. An 8 week old pup doing that??? Its a first for me in 34 years of having hounds.
He turned and walked back inside to be held, petted, more photos and videos. Sorry that I didn't take even one. We had been there almost 30 minutes when he started whining and pacing. I guess he wanted to go home. When he started howling ... we laughed while they got videos of his howling ... I KNEW he wanted to go home. He was asleep in the passenger seat before I even pulled out of the parking lot. 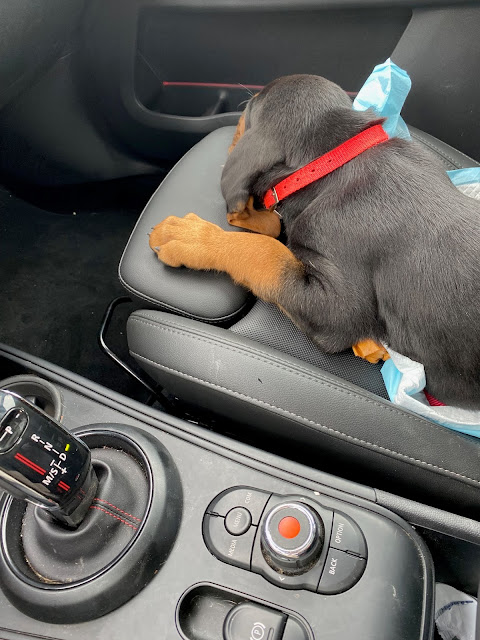 I knew he was tired as he walked from the car to the front door, unleashed. He stopped to pee again before coming inside. I turned left down the hallway as he followed me. While I held the door open to his crate he walked inside, laid down and was asleep just like that. 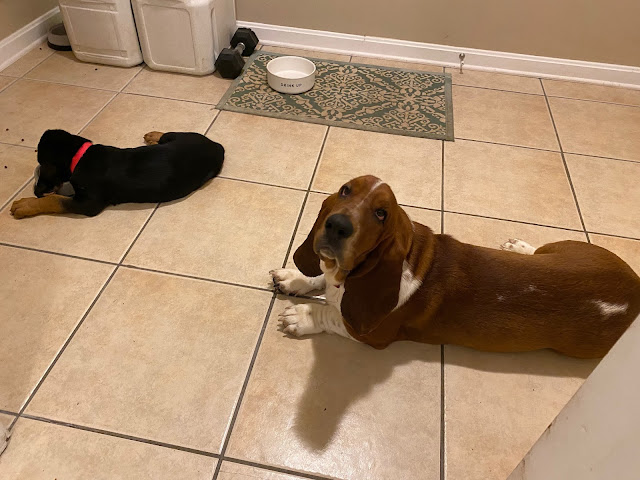 They all slept for almost two and a half hours and it was time for lunch. Like other bloodhounds I have had, adults or puppies, some of them just like to lay down while they eat. He is one of them. As you see the stray kibble, he is also a sloppy eater but when he is finished with the bowl he will clean up every piece left on the floor. Henry is just wanting to show everyone how good he can be by not walking over and stealing Watson's food. 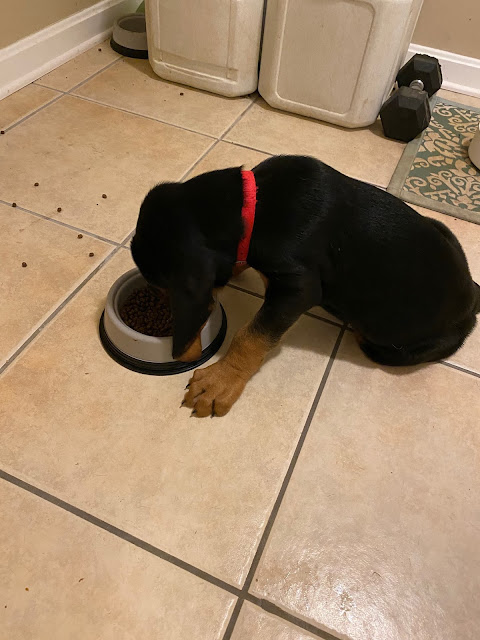 I guess he needed to stand up to get some air for easier intake of kibble. Three times per day 1-1.5 cups per serving. Of course we head outside right after and he always does what he is meant to do, even in the rain. 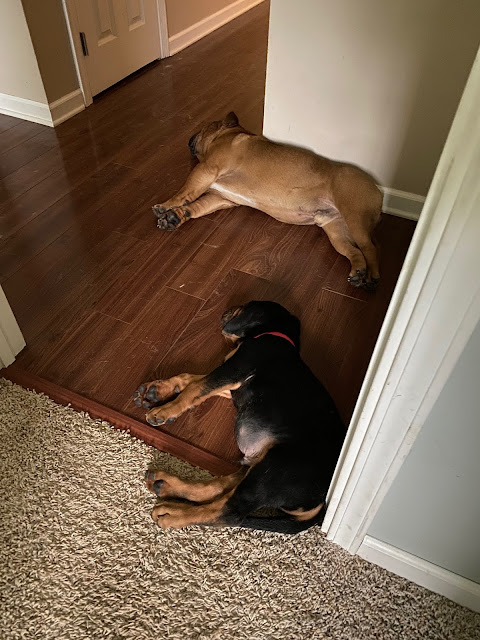 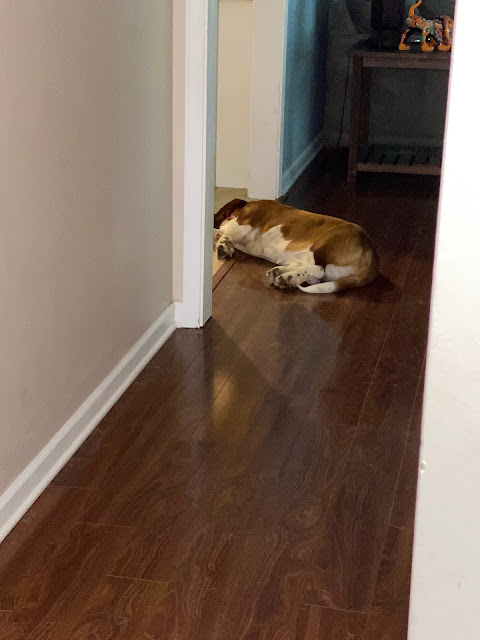 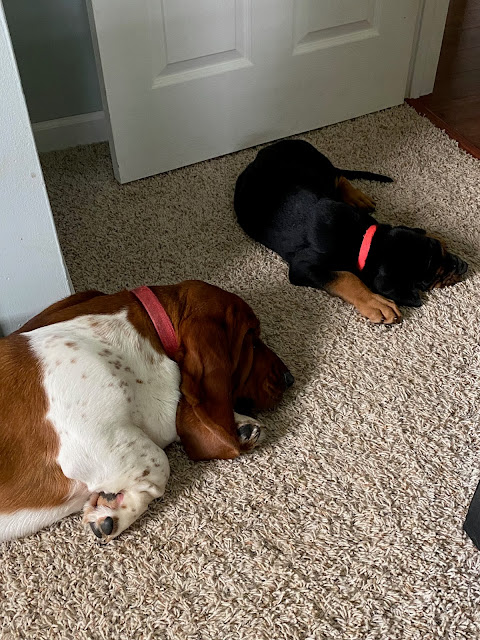 After all my calculations, reading and online measurements for the fence this past weekend. I have decided to try the invisible fence by Dog Watch. The price was better than I expected with some different features than other invisible fences I have read about. Their price was standard for three dogs and half an acre. My property is .4 of an acre. I only want to fence in the backyard. Their batteries last 2-3 years. Any breakout, or low battery will notify me on my iPhone. You can check out the "compare" link located at the bottom of the page. She answered all of my questions about it and I had a lot of them, along with some concerns.
Some say this will not work for a bloodhound but they have bloodhounds using it, Great Danes, German Shepherds and Labs. I will NOT be leaving my hounds and a dog within this fence when I am gone. I could do that in Arizona with the concrete block fence and locked gate but I'll not take that one in a million chance that someone would want them more than me. So even if the fence works, they will remain inside anytime I am away from the house.
Walter seems to have snapped out of his low mood he had ... he ate two full meals today for the first time since Stella has been gone, played with Watson and Henry, plus wrestled with me. He is acting like his old self again. I guess you can say he has been a little feisty today and that was good to see.
Oh, if that fence does not work, then I will have a aluminum fence installed and hope I don't have any diggers that will try to tunnel under it to escape. That would concern me with Stella since she was a professional escape artist but these three show no signs of digging or chewing their way out of confinement.
It has been overcast all day with a little rain. We have had over two inches of rain this month here in 'the tropics' of Southern Indiana.
at June 21, 2021
Email ThisBlogThis!Share to TwitterShare to FacebookShare to Pinterest
Labels: Bloodhound Puppy Playing, Bulldog Playing, Dog Watch Fences