Heidi and Her Allergy Update 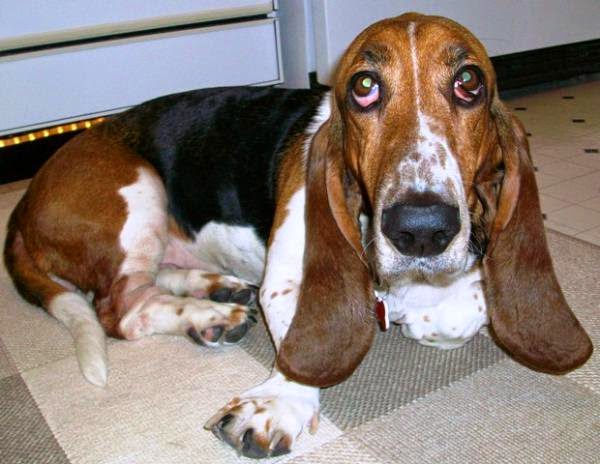 Heidi may be the one hound that isn't talked about as much as the others but I give her just as much attention as Winston and Sadie. Since I bought her from a rescue service in July 2011, she seems to stay by herself most of the time. Sadie is a little big for her to play with, Winston is at the age where running around and playing is not on his agenda ... so she hangs out kind of on her own. When she is in the house alone she does like to play, will sprint all over the house wanting someone to chase her but will immediately stop if Sadie enters the house. She does sleep with them at night and will also sit on the couch with Winston in the evenings.

Sadie would like to play with her but doesn't realize how big and strong she is. Sadie has clipped blocked me before in the back of my knee, knocked me down various times and it felt like one of the better tackles I remember from high school football, many many years ago.

When I bought Heidi from GABR on July 2011, she came with a reputation of being "a runner" and a file full of medical records where they had treated her for allergies. She now walks leash free on the daily walks with no problems. She has chased an occasional rabbit but will always tire out and stop before getting to far away.

She also goes out and stays outside for short periods of time without a leash. I think it might have something to do with her knowing this is her home since it's the first time she has been at one location for three years after moving from different families and ending up in the dog shelters her first two years. 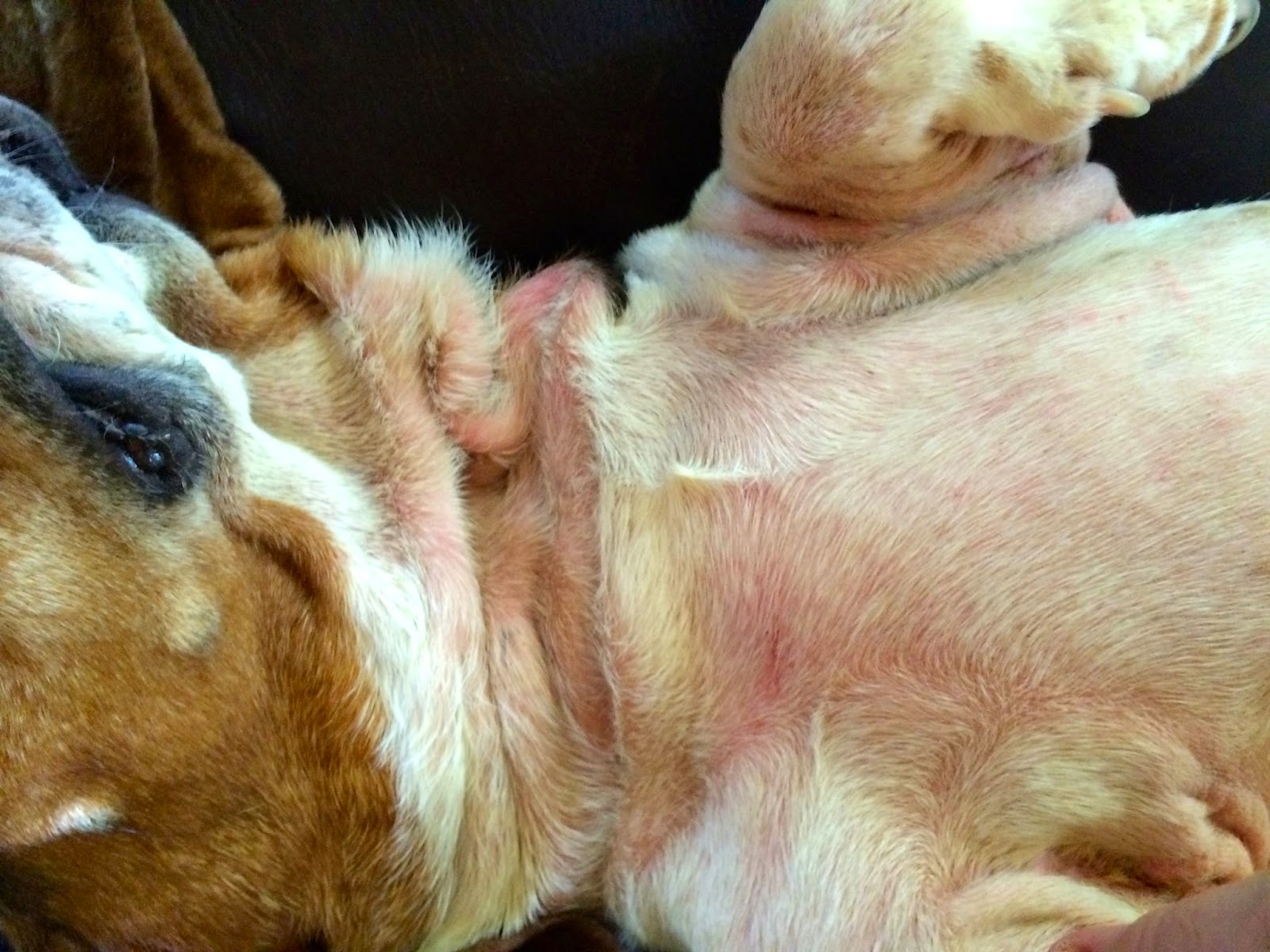 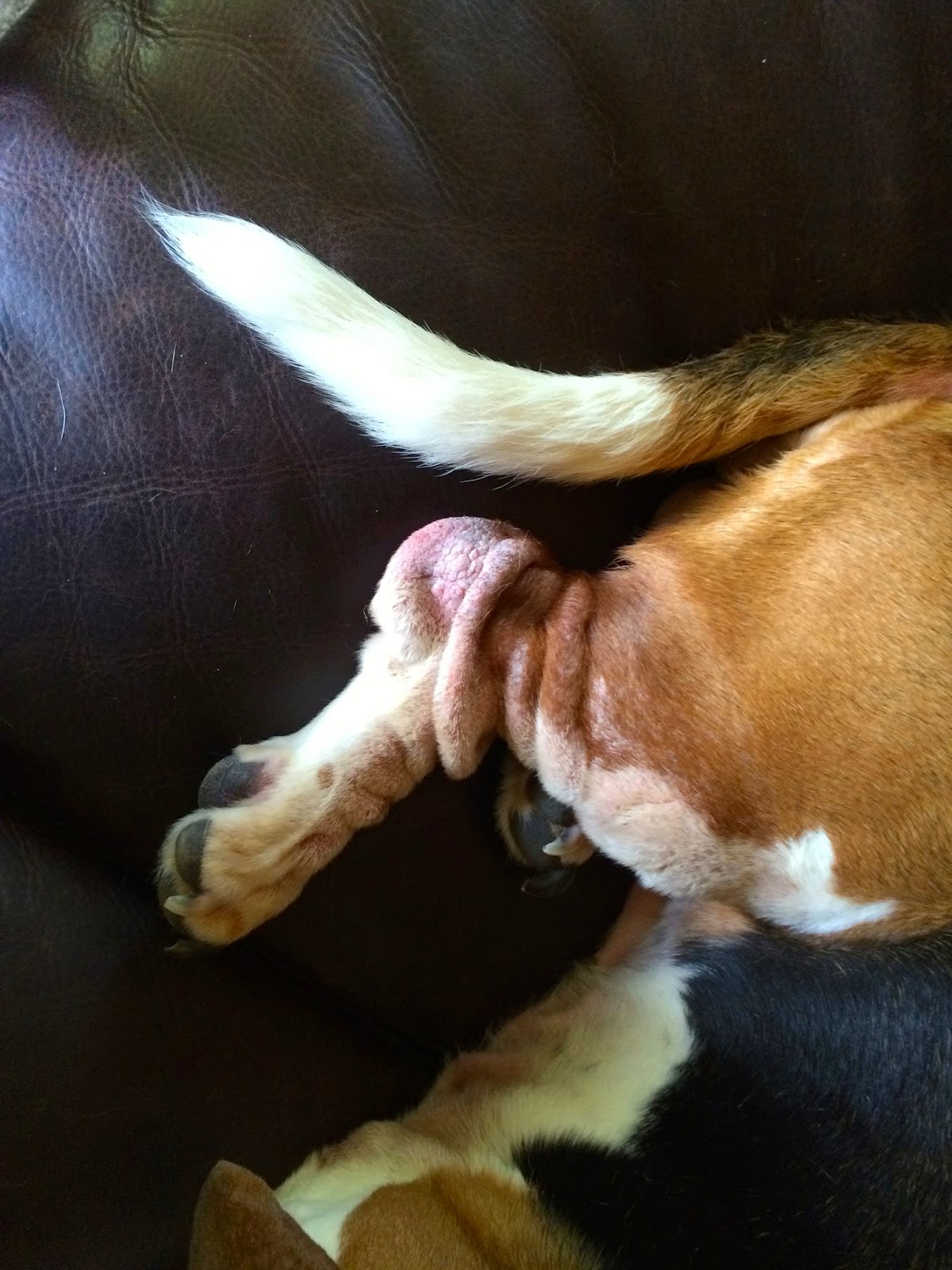 She does not wear a collar except on her walks. The original diagnosis was alopecia on her rear legs. She has been treated at different times over the past three years with Ketoconazole, Medrol, Tribrissen and the latest was a shot of Vetalog.

Most of the pills and shots last a month or so and then the rash will return. This past July I decided I did not want to use the different shots or pills so I tried a food additive called Dinovite. After 60 days of daily use, there was no improvement and in fact the rash became worse.

So a few weeks ago when she was due for her annual check up and annual shots, I had the vet give her a shot for her allergies. Within 24 hours I could tell a difference in not only her rashes but also the way she acted.

With all the time she spent sleeping and not wanting to go outside, she must have been in a lot of pain. I will remember that in the future. I was thinking she was just tired/laidback but the reason I assume she was in pain is the way she has been acting in the past few weeks after getting her shot.

She now goes outside around 7am with the other two hounds, in fact she will get up and go outside anytime they want to go outside. Before when I didn't realize how much pain she was in, she would not go outside hardly at all. The only thing is now she thinks that every time she comes back inside, she get a Milk Bone and starts barking. She has always barked more than the other two hounds, doesn't bark a lot, only when she wants a Milk Bone and it's time to eat in the afternoon. 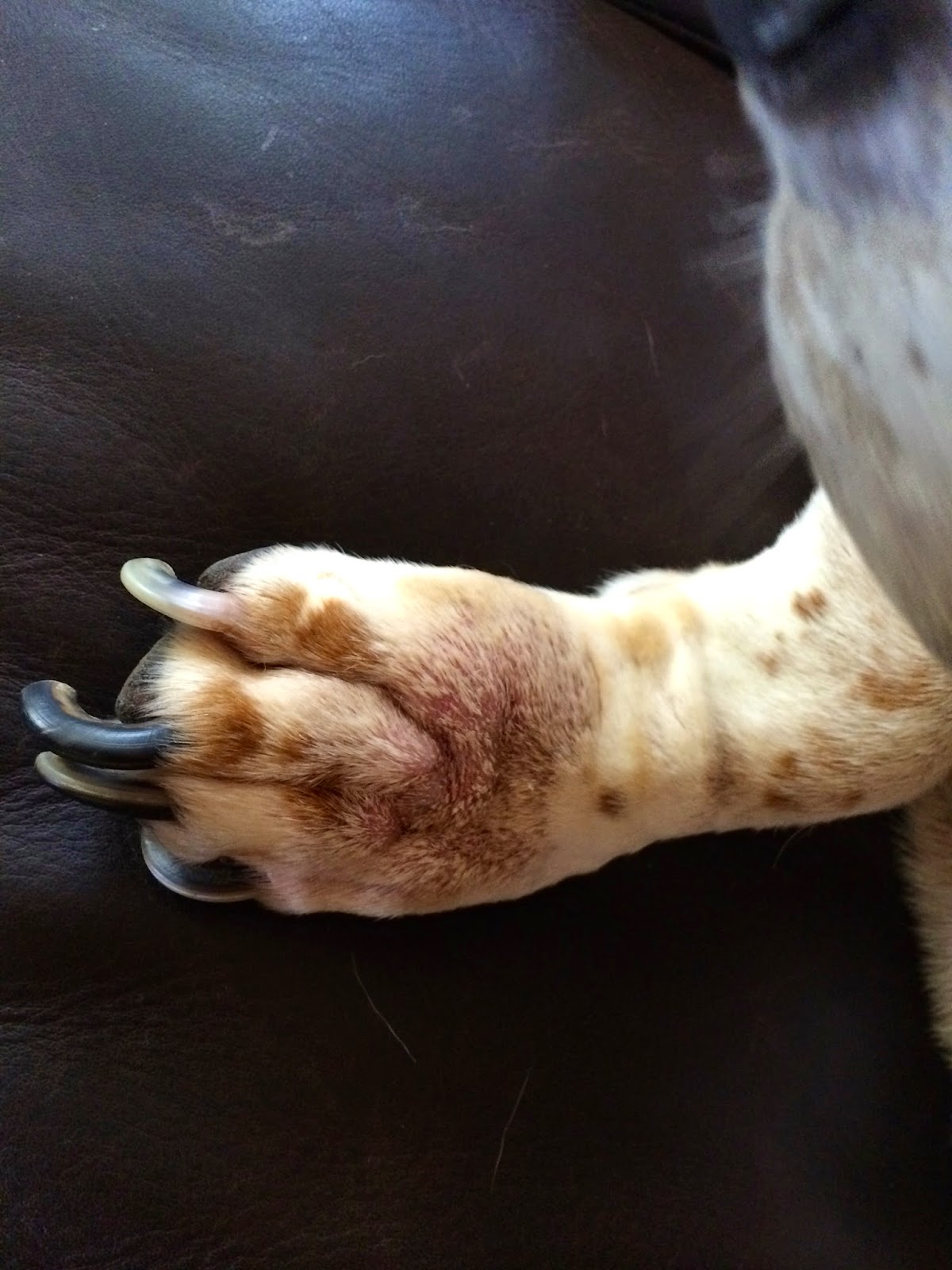 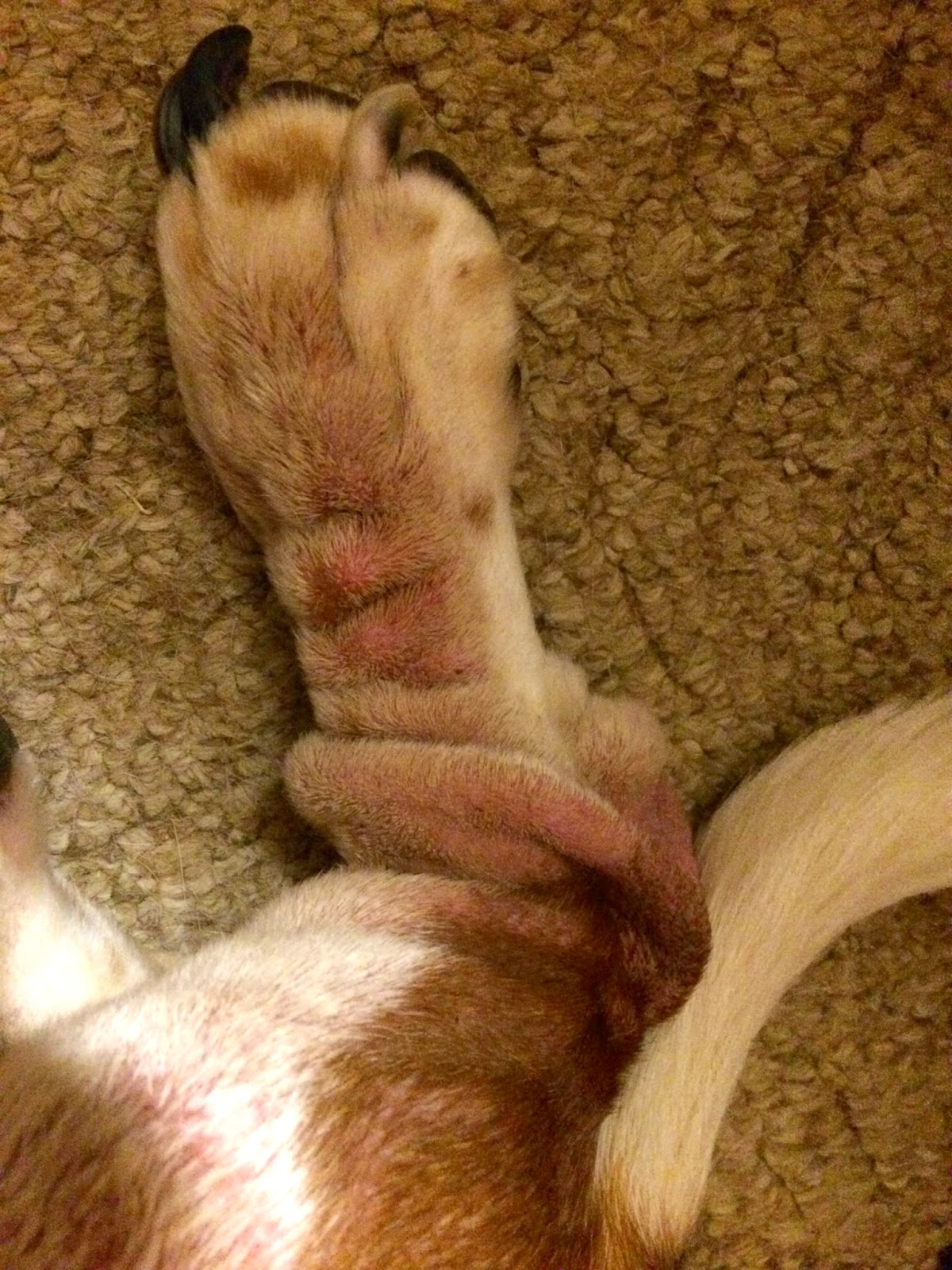 So I can tell a major difference in the way she acts. I will be returning the empty box of Dinovite for a refund as their policy states. I read their customer comments, both positive and negative, before I made the purchase but I thought it might work even though I had my doubts.

I never really thought it was food allergies. In the past I have fed her Taste of the Wild (no grain), Diamond Naturals 60+ for large bread dogs, Fromm Golden, Nature's Domain (no grain) from Costco, all with no improvement.

To find out if it might be the grass or hay she was allergic to, I kept her out of the yard when she would go outside and no daily walks for two weeks. Some of those walks were canceled because of the temperatures being above 95°. After two weeks there was no improvement in her rashes.

I mentioned all of this to the vet at her annual checkup and she said in past allergy tests she had given to other dogs recently, they were allergic to almost anything, ranging from dust mites, pollen, dog dander, etc. She did not think it was a food allergy based on her experience.

The vet did tell me to use the Antibacterial Antifungal spray I had bought the next time the rashes show up and see if that would work before bringing her back in for shots.

The vet then trimmed her nails way back. The vet is the only person Heidi will let cut and dremmel her nails, so they are much shorter than what these pictures show.

Winston and Sadie have not shown any kind of allergies living in the same environment and eating the different foods. They will eat anything in dry kibble just as long as they get their dinner by 4pm eastern time every day. When it gets close to that time, Sadie will come and get me if I have not fed them yet.

She is a great dog that has been a house dog from the first minutes she arrived with no accidents or destruction. I am not sure how she kept ending up in the animal shelter, although the GABR did say the last time she was a "owner surrender" to the shelter. It is estimated she will be 6 years old this December 2014. 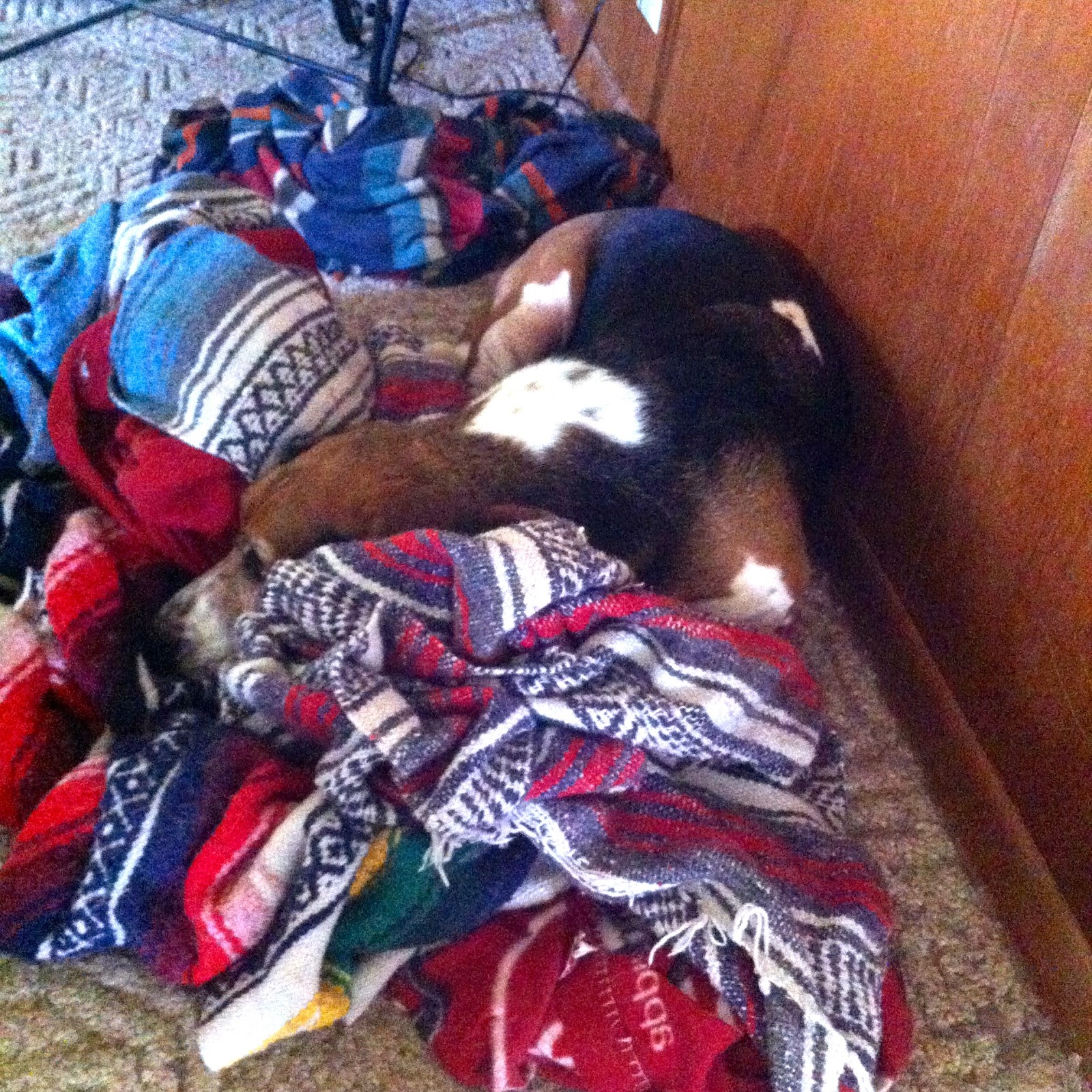