A Camera Has Been Purchased

Maybe a surprise but this is usually my normal process about purchasing decisions ... want something, do some research, and buy it. It usually doesn't take longer than a week for a decision to be made. Why can't it be that simple when it comes to me buying an RV?

After I posted about my interest in buying a new camera, something different than my iPhone 5s and getting back into photography as a hobby, I had answers to my email questions, comments on my blog post, and a phone call from my long time friend of 45yrs. All of these people had taken or are taking great pictures currently. Almost all those that replied are using different model cameras. So I received the feedback I was looking for and by the time I made the 25 mile drive to Bloomington to Best Buy, a decision had been made.

Some of you may be asking "why Best Buy, you could have gotten a better deal". As it turned out, Best Buy was the best deal for me and I'll explain.

First of all to all that commented here on the blog and those that emailed me ... I looked and studied all of your suggestions. There were a lot of positives to sort through but I finally had to ask myself what my plans were for photography. Once I knew what I wanted to do and then built a little buffer into what I wanted, the decision was close to being made.

The camera searches included Amazon, Nikon, Canon, Best Buy, Adorama, Craig's List, eBay, some local camera shops and Walmart, even though I would never buy any electronics from Walmart.

I knew in the future I was going to be needing a zoom lens in the range of 200mm or more. I thought I'd have to buy that separately, so I looked at new and used lenses, recorded their prices. I also knew I wanted to buy more than just a camera body, I wanted at least one lens that came with the camera. When I added costs of buying things needed separately, it was always higher than what I expected to pay.

Tuesday night I called my old friend Ralph. We have known each other and keep in touch on a regular basis since we live an hour from each other. The reason I wanted to call him was to run some of my thoughts by him, Ralph as a teenager had Nikon 35mm camera equipment in the 1960's that he had used during his summer hikes all over the USA. I wasn't sure if he was still into photography. I assumed he might have done what most of us did and that was to buy a smaller, more convenient, automatic point and shoot camera.

Ralph is still using his Nikon D-90 with various lens. I won't go into our discussion but will say that toward the end of our conversation he agreed that I was buying the right camera for what I wanted to do. 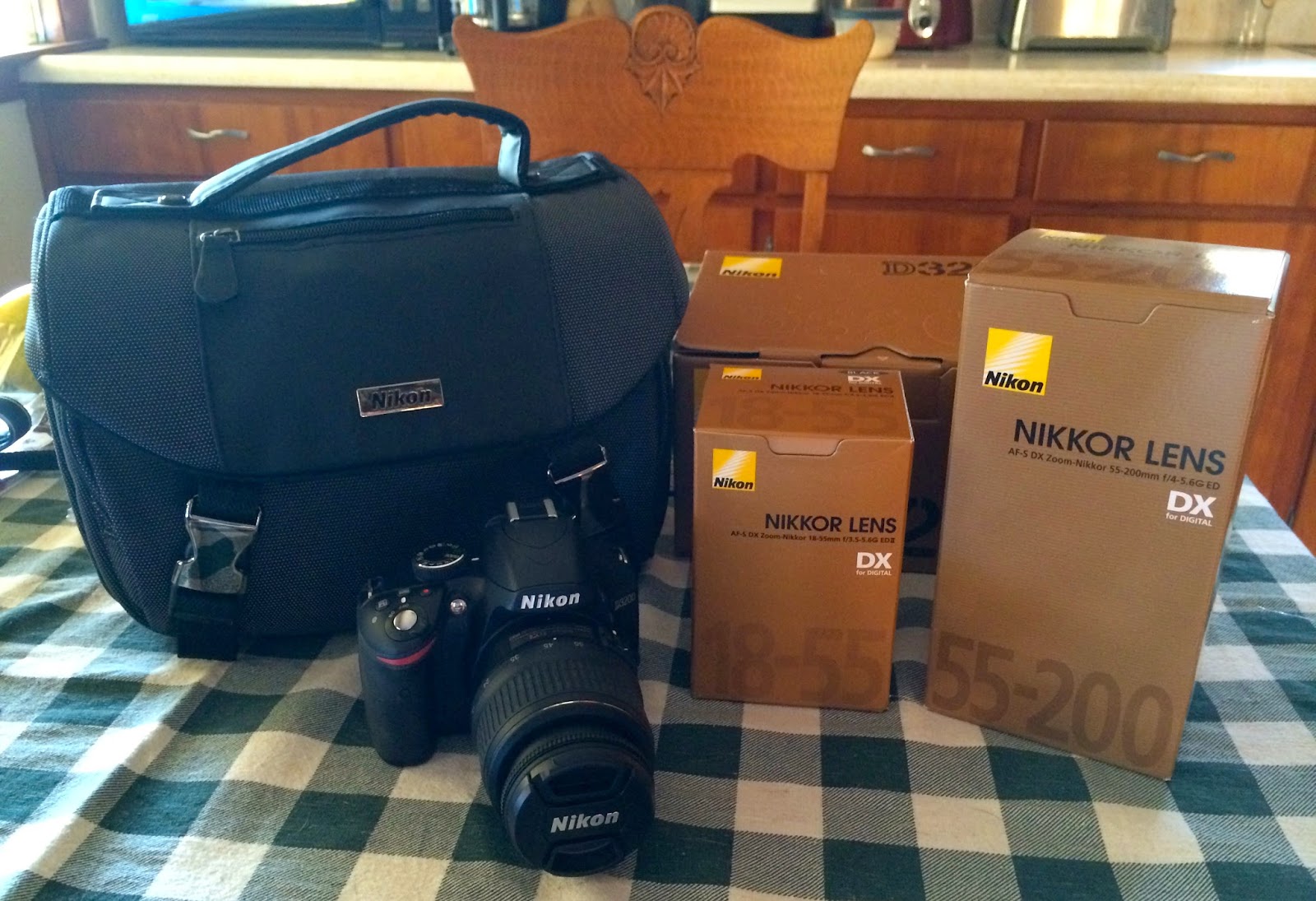 As you see it came as a "Bundled Set" with a bag, a 18-55 and a 55-200 Nikkor lens. Basically it was everything I wanted. I found it at three different places online, all within $3 of each other.

Now here is why I used Best buy. Besides being local, there was another big advantage, more than I expected. Since I had bought most, not all, of my Apple computers there I had a few dollars in awards not used that I could use to decrease the total price.

That's not all. In the past few weeks I looked at Gazelle Buy Back to see how much I could get for my two old iPhones, the 3gs and the 4, that have been sitting in my desk drawer after each phone upgrade. Also since Apple was no longer including the 1st generation iPad with their updates and synchronization with their computers and iPhones I had thought about trading that in for a newer model iPad. I remembered those amounts that Gazelle was going to give me for my two iPhones and iPad if I chose to use their buy back system. I did not think of checking what they were worth on Best Buys buy back program while I was on the computer at home. That mistake cost me making two trips to Bloomington.

So I am in the store ready to buy the camera and saw where they had deals on "trade ins", for the iPhone 6 or 6Plus. Long story short, Best Buy was giving more money for my two iPhones and iPad as a buy back than Gazelle was. Plus I could use that amount toward my purchase of the camera bundle and save even more. I didn't have the phones or iPad with me. I would have to drive back home, 25 miles away to pick them up if I were going to use my trade in dollars before I bought the camera.

So as I have the Nikon D3200 in my hands, I get an email from Mark over at Box Canyon Blog telling me he uses a small Canon Digital Elf 110 HS for his great photos while hiking. There was a Elf 135 right behind me. So I started thinking again about which camera to buy. Since I was going back home to get the phones and iPad to trade in before I made any purchase, I decided I could think more about the cameras on the drive home.

When all of the dust settled after using my award dollars on my account, the amount for my trade ins... My Nikon D3200 Bundle was bought for $335. I sprinted to my car and got out of town before they had the chance to change their minds. (j/k)

So this morning while the camera battery was charging and over coffee, I read the manual that came with it. I covered enough material to be able to use the camera. I lot of camera stuff came back to me from my past as I started to take some test pictures. Yes, I could see my hands were shaking just a little bit as I glanced through the viewer. It's great to have modern technology to fix that issue. So here are a few samples, nothing major, just some test photos. I didn't make any enhancement changes to the photos except crop a couple.

WARNING: On the photo of Sadie below you might want to scroll past it to the next picture of Winston, as it will be gross to some people. Otherwise if you choose to look at the next picture of Sadie you will see one of the highlights of owning a Bloodhound ... you might want to duck or turn away if she starts shaking her head. That isn't a white string you are seeing ... that is good old fashion bloodhound drool, stuck to the side of her lip.


Winston on the other hand has just returned from the daily walk and a little aerobic exercise. He must have been feeling good today because at times he did some trotting through the field. Usually its a very slow walk with him. 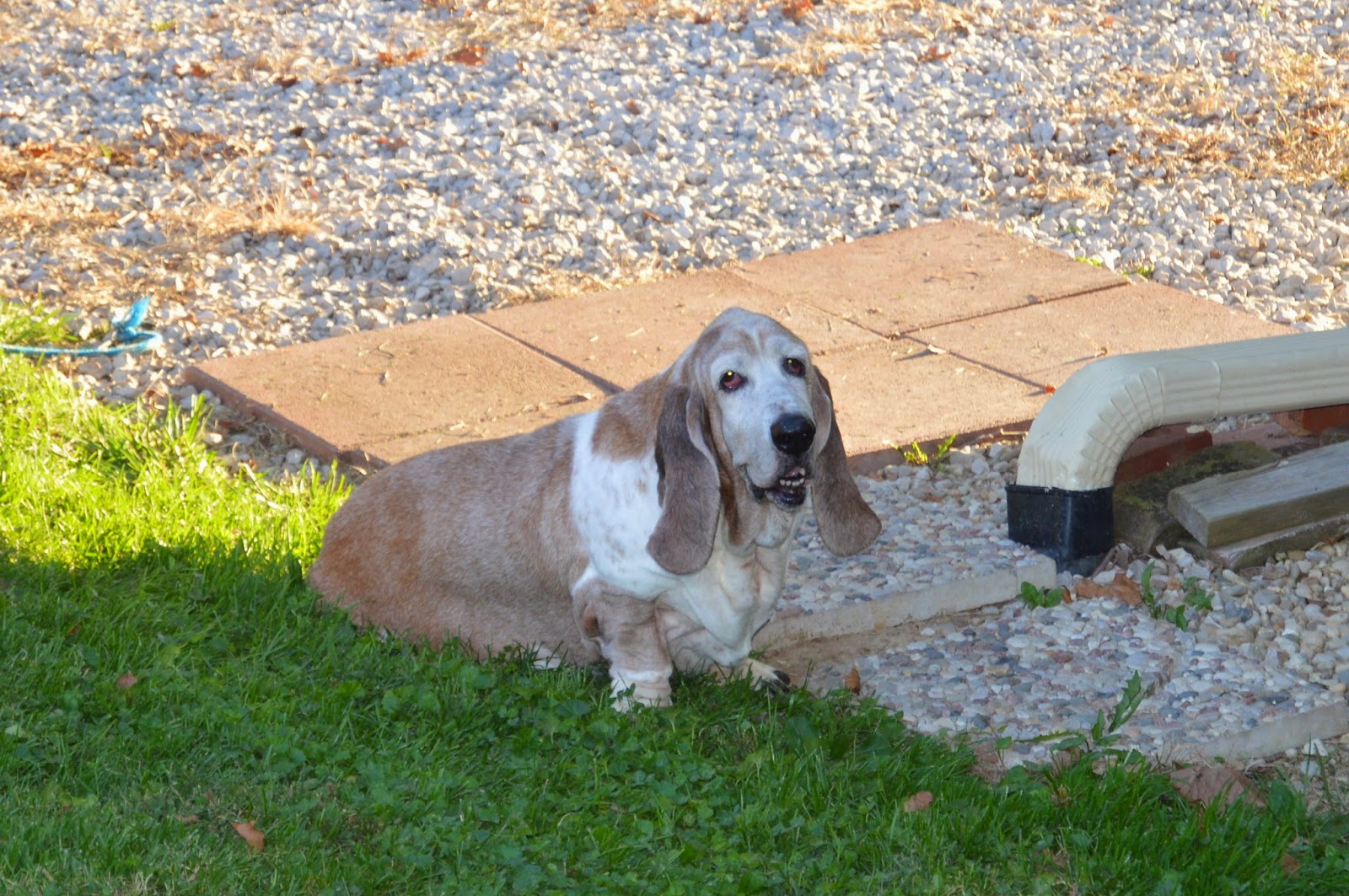 After the walk Heidi refused to come back outside for the photo shoot ... so nothing of her on this post. She is stubborn and I am stubborn.

The next shot is one of the older trees still standing in my yard. Someone told me it was a mahogany tree, I'm not sure ... but it's been there a really long time. 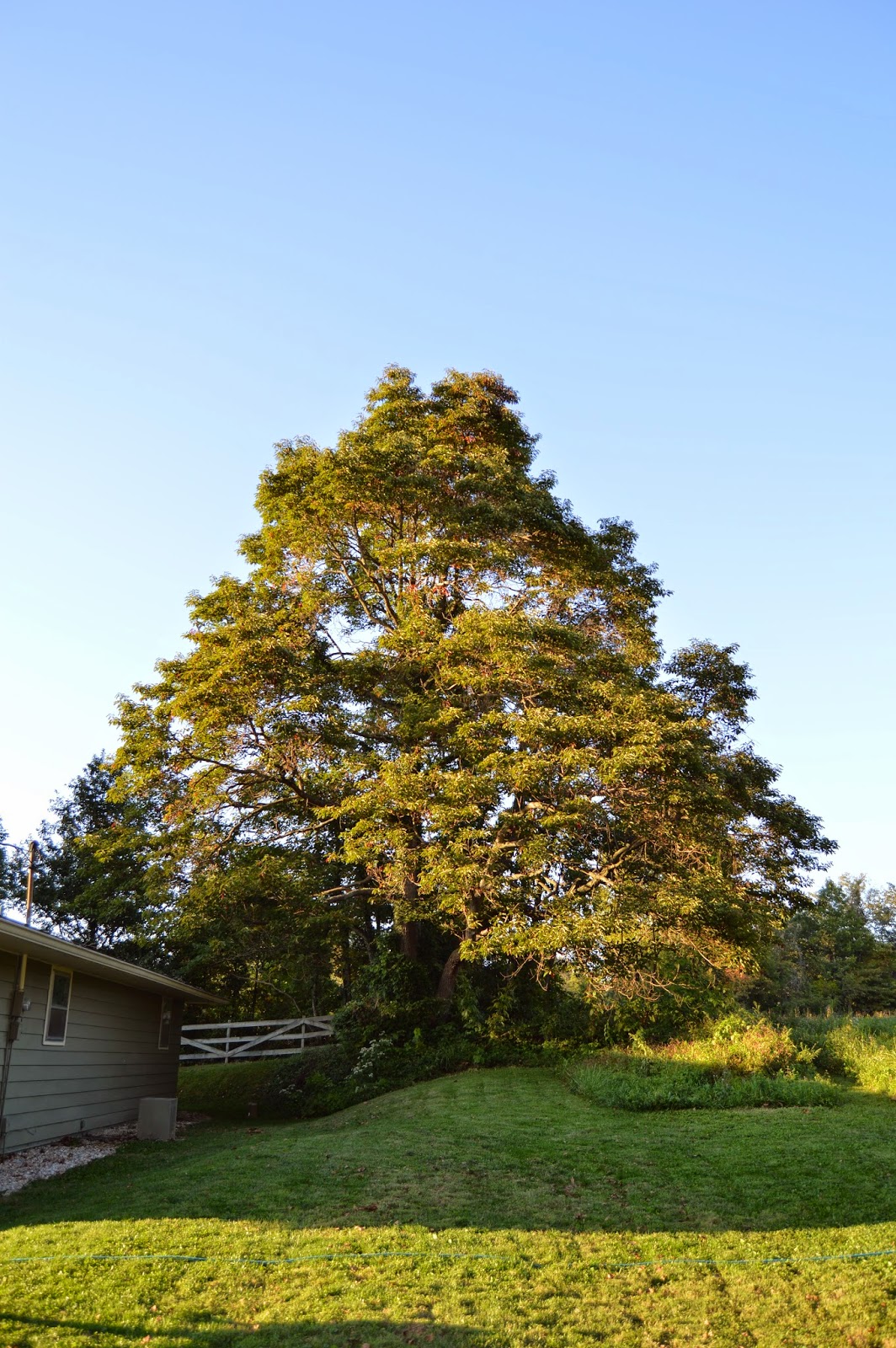 I "know just enough to be dangerous" with the camera, I like the clarity of the test pictures I took, something I was wanting even after cropping a couple of them. I ended the day with a short mountain bike ride to town a couple of miles away, about 4 miles round trip I guess. Combine that with mowing the yard today I should be able to sleep hopefully before midnight instead of 3am - 4am. I have decided these past few days as I have tried to decrease my computer time, that my days are going to be spent outside when there's good weather. I have decided to keep my computer time after 6pm. I cannot waste good weather, sitting in front of a computer all day.

For all of those people that contacted me with answers to my camera questions ... thank you.
at September 25, 2014
Email ThisBlogThis!Share to TwitterShare to FacebookShare to Pinterest
Labels: Best Buy, Nikon D3200, Nikon D3200 Bundle