A few months ago on my way to recycling, which our center is located out in the middle of some corn fields, I passed a field of horses. It was a great opportunity to take a neat photograph but all I had with me was my iPhone 5s, I had no way to zoom in on the horses themselves. I took a couple of photos, one of them when they took off running but I was too far away. That was when I had a short mental bolt of wanting a different camera.

Sometime last month I was going through some older boxes of stuff when I had a sudden urge to downsize a little more. I found an old Kodak 8x11.5" box I had forgot I had, full of photographs I had taken close to 30 years ago with my Nikon (can't remember the model) and 70-200mm zoom lens. Some of those were black and white 8x10's, some where 5x8's in color.

A few of the photographs I took as a series on the beach in Hawaii as the sun was setting, not knowing my zoom lens was picking up a kyaker moving in front of the sun. What stood out to me was how sharp they were, even after 25-30 years old. Of course most of my photos were on 35mm slides. There must have been 1,000's of them, too many to look through and the thought of scanning them was overwhelming. I glanced through a lot of them, holding them up to the light and instantly going back in time and could almost feel like I was there.

Once again ... quality was sharp and clear.

In the mid-90's I sold all of my lenses, filters, the bag, tripod and camera body to a neighbor in high school wanting to pursue photography. I am not sure why I decided to sell that stuff, except a few years prior to that for some reason I had stopped using the equipment completely. I may have started taking photos with a smaller camera with a built-in zoom lens. I don't remember the name or model of that camera, but I do have a few photos from that time period.

Maybe the convenience of not carrying a bag of equipment with me? Maybe it was having just one camera and a multiple size lens that made me change my direction in photography? I don't know but I do remember after 1994 I started taking photos a lot less. Hardly at all. My bag of equipment sat in the closet never used until I sold it.

Last month I kept going back to those older photos and looking at how sharp they were. Then I would look at all my digital photos on my blog and in iPhoto on my iMac, trying to compare the difference. I thought my iPhone took pretty good photographs but one thing I noticed was when I would crop the photo and it would zoom into a closer view, the sharpness disappeared. You can see that in yesterday's post with Heidi at the top of the page. The other two photos were not cropped but for some reason were not as sharp as normal. Could it have been my hands, the light ... don't know.

When I mentioned I was looking at different camera equipment on my blog, a few made comments, a couple answered my questions by replying in emails and other's I found out what kind of camera they were using from their websites. All of them have great photography of their travels posted on their blogs. All of them were high quality and reminded me of my older photos that I shot with my 35mm camera years ago.

I knew then I wanted a different camera than my iPhone and the palm sized Nikon Coolpix 3100. I had bought the smaller camera in 2005 to take photos of items I was selling on eBay and my other websites. I've rarely been able to take good photos with that camera without using the tripod ... too small to hold steady.

So the past few weeks I've been spending more time looking at different cameras online, reading suggestions as I get them and just like my rv decisions ... hadn't come up with one.  Still I am much closer today on what to buy than I was a few days ago.

I've looked through all the specs, customer reviews, and even wrote down a list of camera models and lenses used by people that had commented, emailed or blogs I follow. NO ... I have not put that information into a spreadsheet like I have done on everything else, so I am pretty proud of myself that my camera analysis has not gone to that depth.

I was close to buying a Nikon D3200 last week. Since it was an older model, it was on sale. It came with the bag, battery, charger, strap and an 18-55mm lens. I didn't buy it, I wanted to research some more.

Albireo uses a Nikon D3300 and is considering moving up to a heavier, larger camera, the Nikon D810. That is some great equipment but might be more camera than what I am looking for. I don't know how far I want to take this reborn hobby, so I am almost starting over with a camera that a beginner would buy .. maybe 'intermediate' would be a more accurate level.

Al over at The Bayfield Bunch takes fantastic photographs daily. That is his hobby and although he claims he is not a professional photographer, the quality of his photos and the way they are taken are every bit professional. He has different cameras with different size lenses mounted for different shots. They range from a Nikon D3100, a Nikon D-90 and his older camera for backup, a Nikon D-40. He has a Canon SX210iS on his belt at times for the unexpected shot and a Canon A730iS near his chair inside to shoot the Phebe's. I do those kind of inside shots with my iPhone 5s, although Sadie is not a fan of being a photo model.

Chinle at Spotted Dog Ranch takes her landscape photographs of her travels with a Canon EOS Rebel T1i. A lot of her photos are using a larger zoom lens, one that I would need. I would have to buy the new version, a T3i if I went that route, unless I could find a used T1i on Amazon or Craig's list. Yet, there is just something about buying used equipment from those two sites that I don't like. I would buy used equipment from a 'old school' camera store or a friend though. From her photographs from Canada this past summer, I see that I would need 200mm or 300mm zoom capability for what I want to shoot.

Gary Ramsey has some fantastic photography at Travel Small With Ramsey. He uses a Sony NEX 5n. Those cameras are a little out of my price range, although the price for a used Sony NEX 5n is reasonable on Amazon, but you know how I feel about buying used equipment.

Basically I had been looking at different cameras that had interchangeable lenses. I was favoring the Nikon D3200 due to the customer reviews, the price and it was within a short distance from my house. I haven't bought it because I didn't know if I wanted to go back to carrying one camera and then a bag with different sized lenses. I had done that before many years ago when cameras that had multiple range lenses built into the camera were not available.

I kept reading and looking.

Then yesterday I get a comment on my blog post from Lloyd over at Enjoy The Journey. His older blog name was Wanderin Lloyd for those that follow blogs. Either way his photography is also fantastic with different cameras used over his 13 years of traveling. You will see in his comment yesterday that he uses a Canon SX40 for his trips to zoos, museums, etc and uses a Canon SX700 30x lens when hiking.

Those two cameras kind of hit home with me. Great photographs, great consumer reviews and I noticed all the photos taken from a distance were sharp. Just like the cameras I mentioned above but these had just one built in lens with a wide range of different distance. Was the Canon SX40 the camera I had been looking for?

I spent a lot of time last night looking at those types of Canon and Nikon cameras. I am thinking that might be the type of camera I need.

What I want is one camera, ability to shoot macro shots, landscape, shots of my hounds even in "action", zooming in on the eagle that shows up in back on rare occasions. Then at times I'd like to zoom in on the 10-15 deer that surprise us at times just in back of the house. I also wanted to be able to catch action shots that requires high speed, at sport events, especially when I go to the Indy 500 to watch practice or the times I am sitting on row 53 at a football game wanting to take a shot down at the line of scrimmage or sidelines.

After reading about the Canon SX40 and SX50, I am beginning to think that is the camera I've been looking for. I would have to buy the SX40 on Amazon, everyone locally is selling only the SX50 model with the SX60 coming out in October.

In the meantime, the hounds will continue to "sleep on it" before the decision is made. 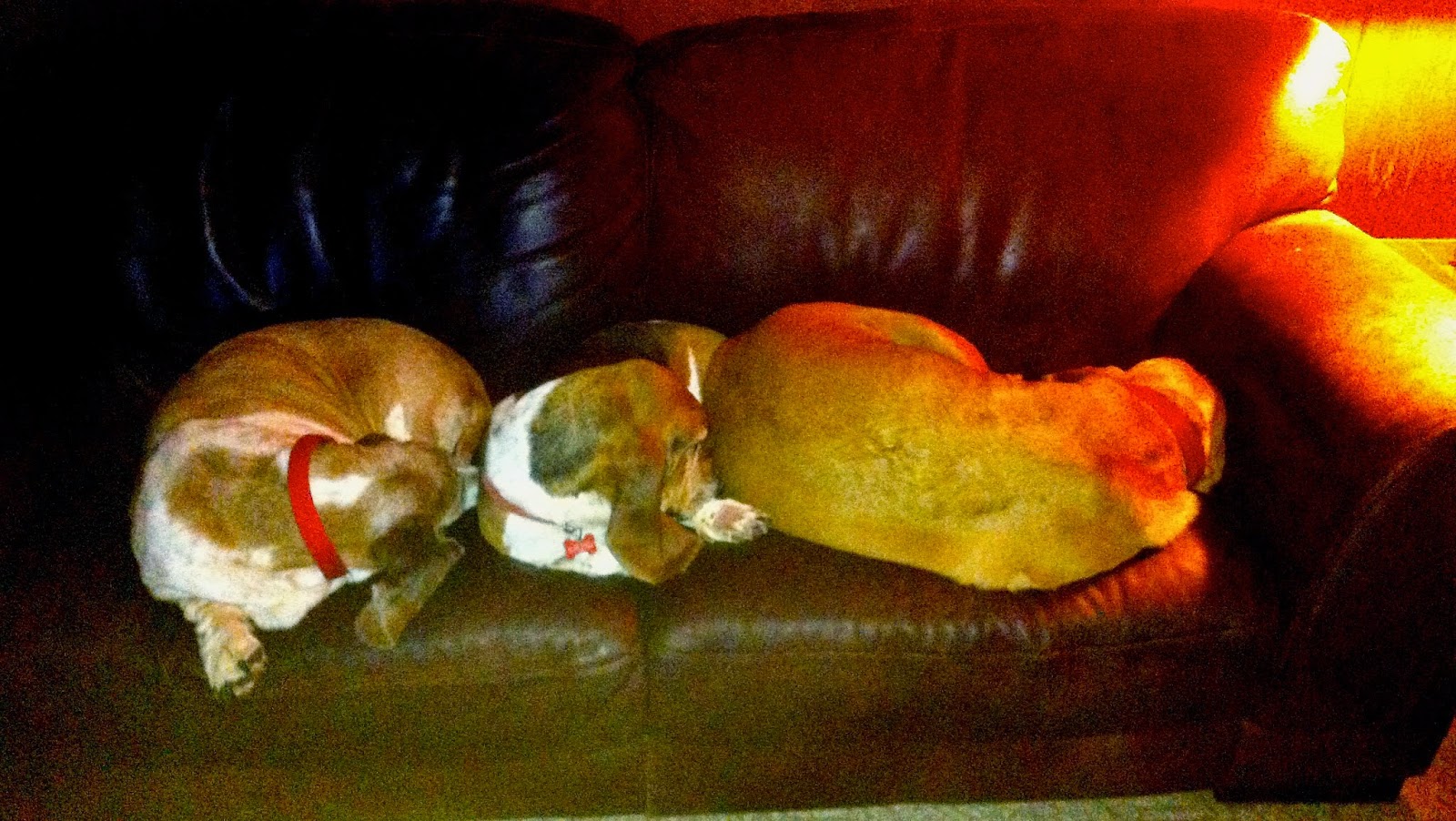