Not a Lot To Blog About 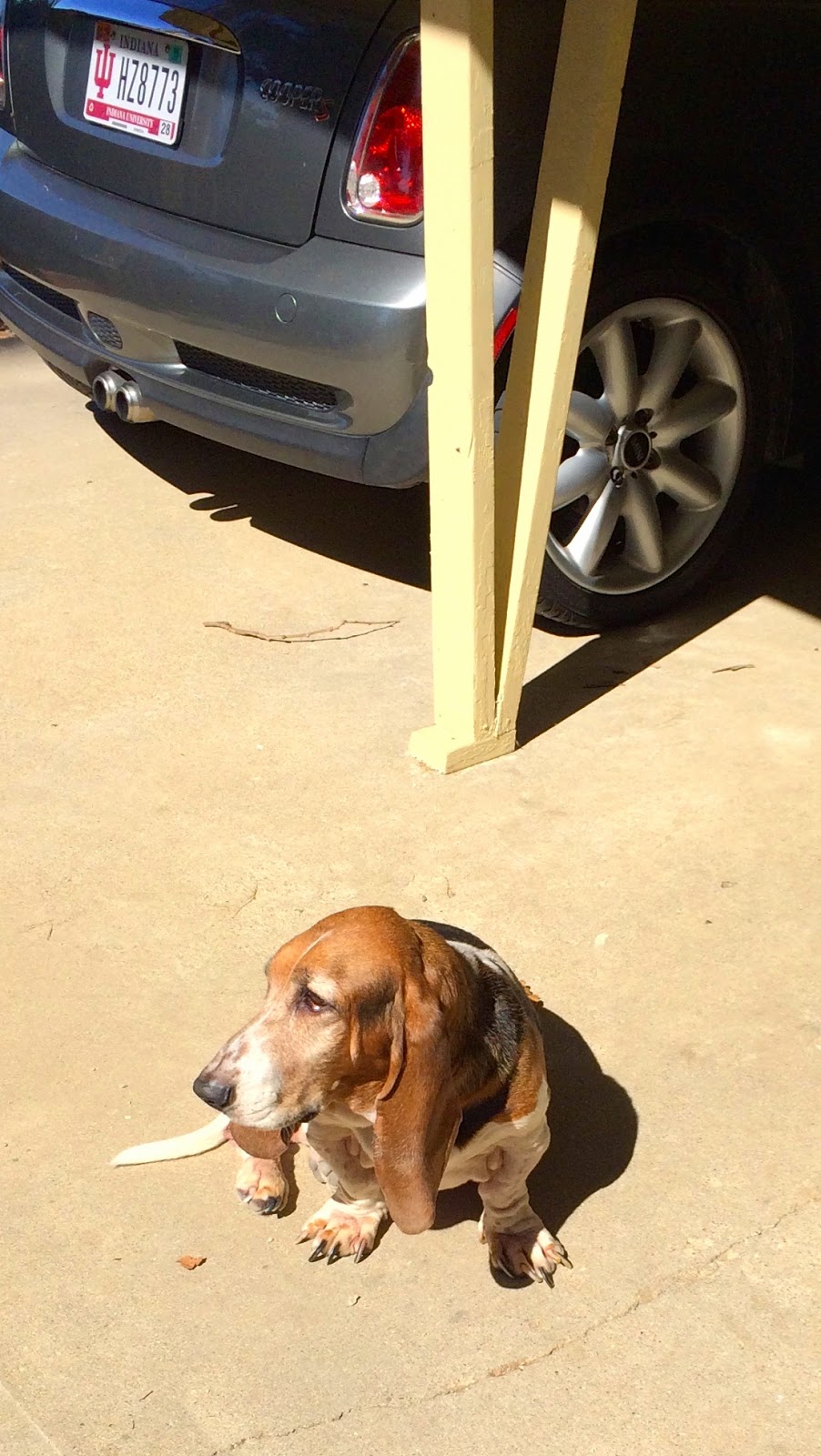 One thing that has changed since I retired in April, the hounds get to go outside a lot more than when I was working. They also seem to like to go outside at the same times day and night. Just recently Heidi has been going outside every time the other two go outside and that's a good thing. Just this past summer she rarely got off of her dog bed on the floor and usually that was just to move to the couch.

But she is evidently feeling better now because not only does she go outside even for short trips, she is barking at 4pm every day to be fed.

It may take some coaxing to get her to get off the couch and go on the daily walk but once she starts the walk, she insists that she be the leader of the walk and will do anything to keep in front of Sadie to maintain the lead.

Little does she know that Sadie could care less who leads. Sadie is only conscious of what scent is in front of her nose and yesterday it was good I had her on a leash, the deer scents were stronger than normal. 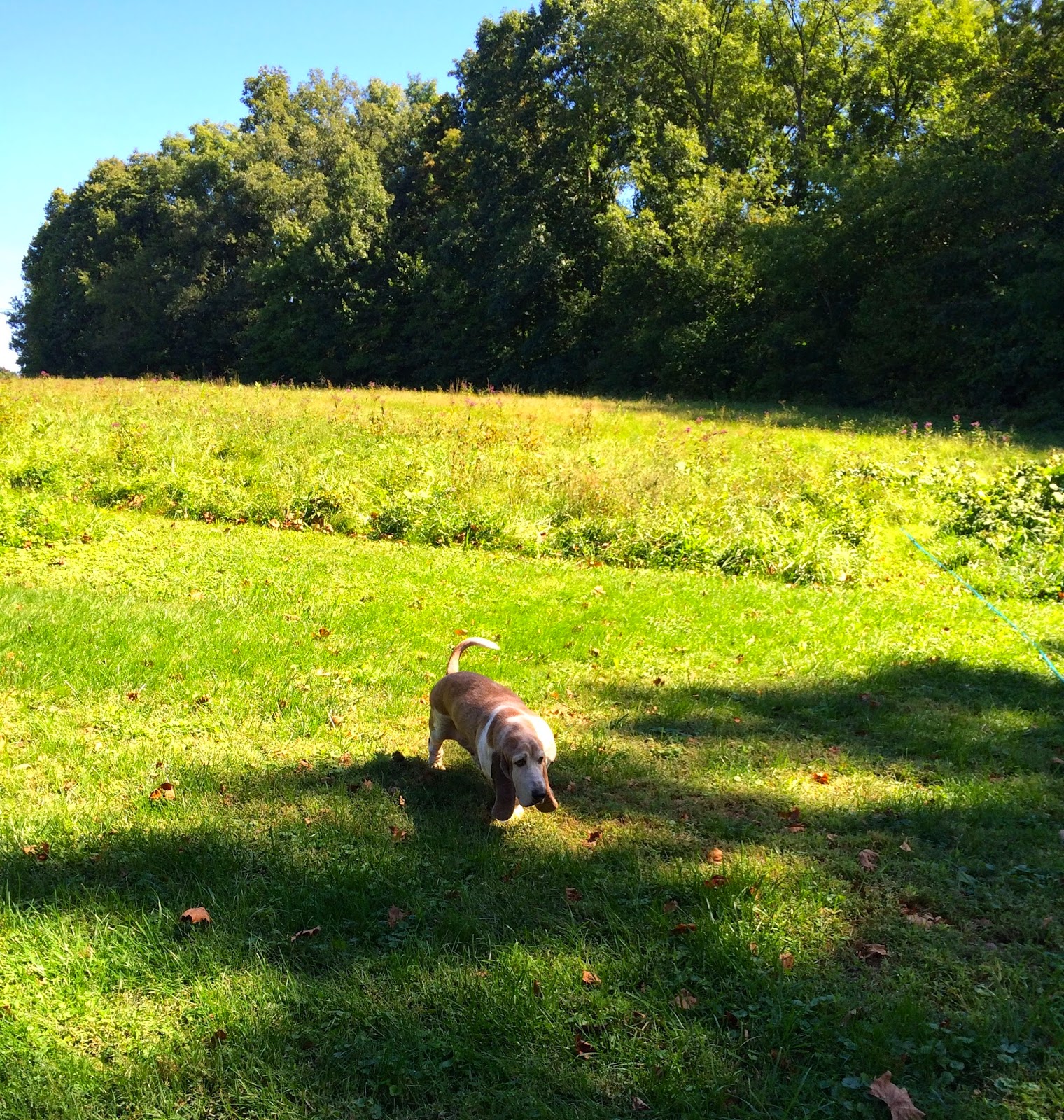 Winston on the other hand is getting older and consequently is needing to go out more times than this time last year. I can tell that his aging process seems to have increased this past year and in a way that is a sad thing.

He will also put his nose to the ground as soon as he steps outside. He is stubborn, will not listen if a scent has him busy and is slow in everything he does. He is on his own clock and will not move faster no matter how much I voice commands.

In this picture around noon today he is enjoying a cool 65°. His favorite position is laying on the concrete in the sun and will spend hours sleeping, at times so long that I forget that he is outside. 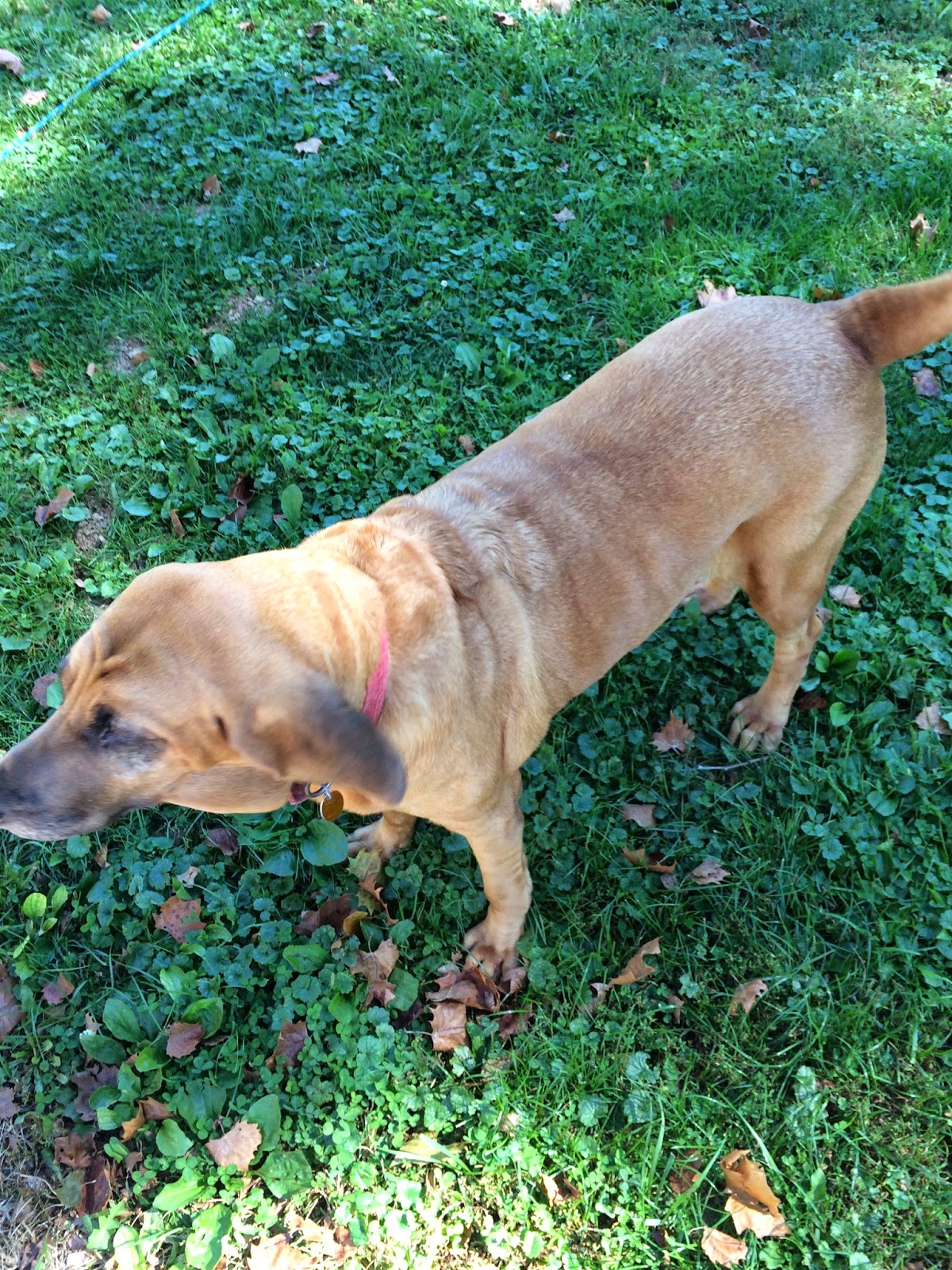 Sadie have has never liked having her picture taken. I was able to when she was just a few months old, but after that she would turn her head or take off running. She definitely does not like the camera.

In this case I took eight different photos trying to catch her looking at me and every time at the last split second she would turn her head.

She might not like cameras but she LOVES outdoors. She loves going outside, will stay out for a while or there will be times that she will want to come back inside two minutes after wanting to go outside. She never barks but will just stand still until I come outside to find her.

She will even sit sometimes in the field not moving, thinking she is stuck or her rope is tangled up. The funny thing is, she is not on the rope that is anchored. The one time she was attacked by the neighbor's dog, she just sat down and didn't move while the other dog was moving around her in circles barking.

All of these photos were taken today around noon with an iPhone 5S.

It's another beautiful day here in the 'tropics' of southern Indiana. It was all weekend actually and it is the norm for this time of year, yet it's strange seeing all the different kinds of weather hitting other parts of the USA, the fires in California, flooding in Arizona and tornadoes yesterday in Michigan. Still very nice here and one of the reasons I hardly have the urge to travel in the fall seasons in the Midwest. Plus it's football season.

Saturday was the normal college football marathon. What can I say, I'm addicted to that sport even though there are still things outside the game I don't like about it. I am hesitant to say what I don't like about the current game because it also spreads into the NFL, and society in general. It would take too long to type and discuss all the different aspects of some sad situations and wold only lead to more discussions on subjects I am tired about hearing in the news.

I'll talk about the games only and not the news outside the games.

My local team (IU) had a major upset at Missouri Saturday. They have a little split personality in them the past couple of years, meaning they can play great one weekend and next weekend they might look like they have never played the game. I'll take the win on Saturday though. Those type of wins are very very rare in football.

I only have one tv but flip back and forth to different games during commercials. I also have my remote set up to a set of sports channels on DirecTv. It's amazing how many games are televised at one time. I don't want to see all of the games but a lot of times there are a couple of games going on at the same time, so I'll record one and then watch it later IF it turns out to be a good game. My Saturday viewing starts at noon eastern time and ends after the late Pac12 game usually around 1:30am Sunday morning. I'm a night person, so there is not a problem with the late finish time.

Sunday I watched only a couple of NFL games. The local Colts games and then a Super Bowl rematch where Denver was in Seattle, a game that went into overtime. Great game to watch.

Some might be asking what do the hounds do during all of these football games? They sleep most of the time which is their normal daily activity. Throughout the day they will have me take them outside, more trips during the day since I am retired. We can usually fit those requests to go outside during commercials and we still do the daily walk either at game halftimes or between games.

Their daily routine is not changed just because I am watching football. It's good they have the room to spread out during the day, each hitting their favorite sleeping spots and those spots do change during the day. That is one thing I think about deciding whether to buy a trailer or not ... the available room. The interesting thing is their sleeping spots are the same every day and change by what time of day it is.

Heidi is feeling much better. She is actually going outside every time the other two hounds go out, where she wasn't during the summer. She hardly got off of her dog bed during the summer, only getting up to move to the couch to continue her sleeping marathons. She takes her time deciding whether to go on the daily walk but then will insist she leads the way once the walk starts.

With all the news about Apple's release of the iPhone 6 and the OS upgrade to 8.0, I am seeing today in the blogs I follow that 8.0 seems to be too frustrating so they are showing people how they can revert back to OS 7.2. I usually wait before upgrading operating systems on my phone or computer and I think I'll still follow that until the bugs are worked out. It's tempting but I'm sticking with the 5s I bought in June. I remember when I decided to renew my contract and upgrade my phone, I had decided not to wait for the iPhone 6. I wasn't sure I would like the size of it.

Really, I have no desire to be carrying a small tablet all the time when I am out and about. In fact I have been tempted recently to selling my 1st generation iPad, my iPhone 4 and my new iPhone 5s ... then going to a cheap flip phone to use for emergencies and making the few calls I make every month. When I thought about that, the only thing I could gain by selling the 5s, is part of the cost of the phone. I would still have to have the same monthly plan with Verizon, so I would not be saving anything there. I might as well keep the 5s.

Reading Rick's blog this morning, I started thinking if I should go back to a Google+ account. Unlimited storage for iPhone photographs is a pretty good deal. I have plenty of room on my iMac, so storage is not an issue for photographs, same with my 16Gb iPhone. I have 1,000's of photos on my iPhone and have barely used the amount of storage available. I still remember the reasons I stopped my Google+ account before and still feel the same way about it.

Rick did bring up an interesting point when he was talking about cameras. He said with digital photography and posting photos on blogs, it really didn't make a difference if those blog photos were taken by an iPhone or a bigger digital camera. Recently I've been thinking of buying a bigger digital camera to get back into photography as a hobby. It's been almost 20 years since I had a larger camera and interchangeable lenses. The only other camera I have besides my iPhone is a Nikon CoolPix 3100, that I bought years ago for my online sales business.

Many times I would have to use a tripod with that camera because I was not able to hold the camera still enough when I used two hands. Would it be that way if I were to buy a larger Nikon? I think a larger camera would be easier to hold and less chance of blurred photos that the CoolPix has at times.

That's about it ... nothing really going on ... and I apologize for the lack of excitement in this post. It's just part of the laid back lifestyle outside a small rural town. I'm spending less time on the computer recently, looking and reading about different cameras, and on occasion trailers and camping equipment. I have thought more about traveling this winter. I still don't see traveling is possible with my three hounds and two hands.
at September 22, 2014