Sadie and Her Separation Anxiety 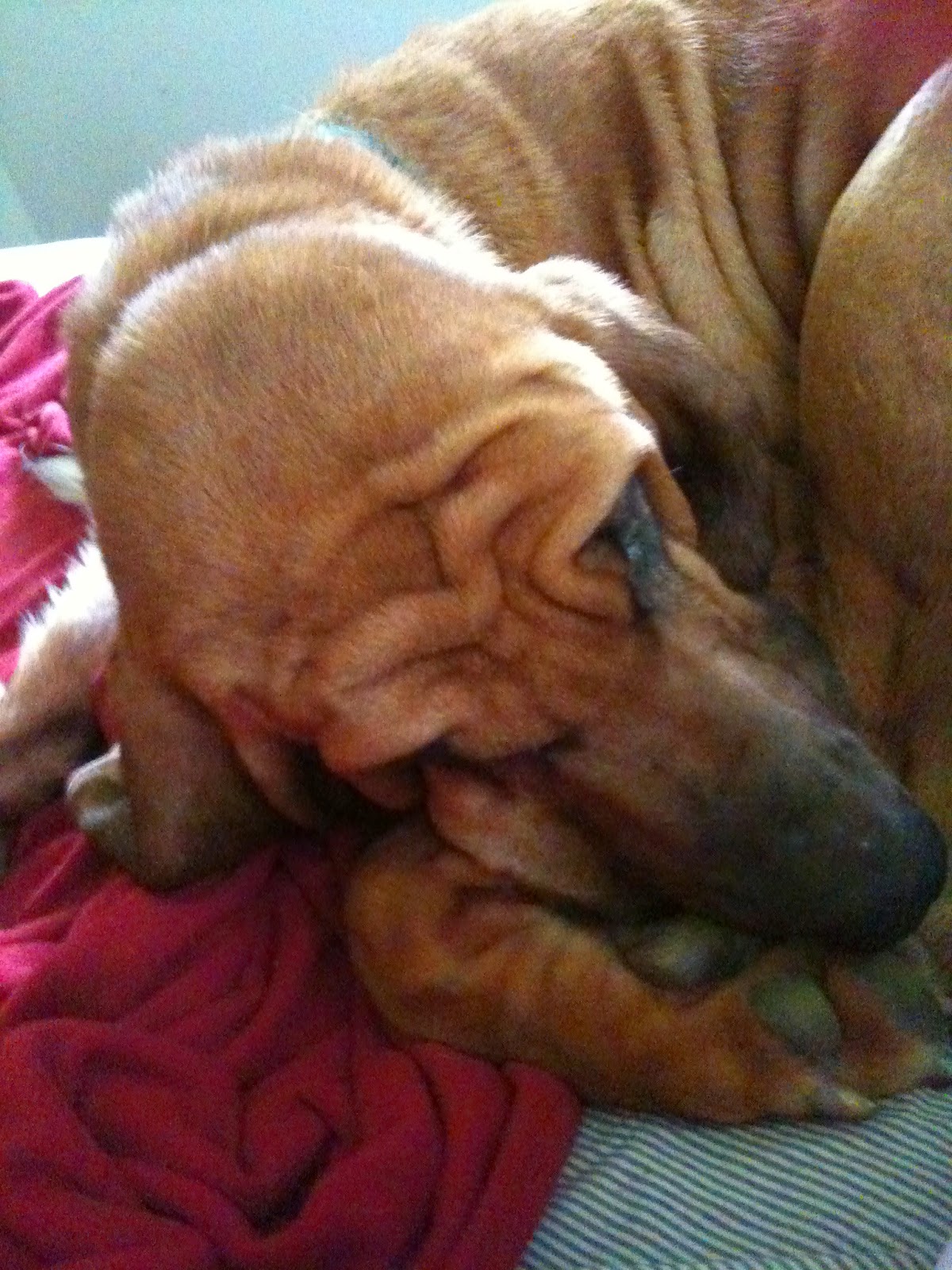 Since the first day I brought her home as a twelve week old pup, she has shown separation anxiety. I thought after we moved past year six that it would change. In a way it has, she doesn't destroy things now, just tracks scent and drags it out for her own use and to show me what she has found.

It is always my stuff and not hers. She seems to follow The Bloodhound Laws that you can see here at the bottom of the page.

In the case of the photo on the left, she spent a lot of time hauling her red blanket from the floor to my bed for a little siesta while I was gone. This happened some time ago.

After a couple of years I spoke with a different breeder than whom I bought Sadie from and she explained to me what and why Sadie was doing what she was doing. At the time there was a lot of destruction involved while I was gone anywhere from 10 minutes to hours. While I was at work, she was kenneled for her first four years to keep her safe and my possessions safe. But during short periods of being outside she would get into stuff.

The breeder had acquired Sadie's dad and their personalities were almost identical. The breeder said she gives her puppies a test at forty-five days old to see if they are trackers or couch potatoes. After I answered four out of five questions positive, I found out that Sadie was rated as a tracker and the reason for her nose to always be in the working mode. It was the reason during the times I would be away that she would get into things, drag them out for me to see when I got back and some times destroyed.

The breeder said if I had bought Sadie from her, she would have given me a pup that tested out to be a "couch potato" instead of one that tested high for tracking. She would not have sold me Sadie. I had originally picked out a different bloodhound pup at first but changed to Sadie because she would follow Winston anywhere he went and would try to get him to play. She was the only one of eight pups that did that. Now I found out that when she followed Winston that showed a tracking instinct more than the other pups.

The two basset hounds can stay anywhere in the house while I am gone, no matter how long I am gone without any problems. I found out a couple of years ago the best room in the house to keep Sadie was in the bedroom. She sleeps on the floor at night, had familiar smells and fewer things she could get into. I also put the two bassets in the room with her to keep her company with hopes of preventing any tracking activity. I no longer kept her in a kennel due to her size compared to the largest kennel you could buy for inside use.

Overall things have improved a lot the past few years and now things she does at times are funny stories rather than getting home and pulling what little hair I have out of my head. Of course at all times when I am getting ready to leave, I have to put a baby gate up not to block the door because I shut the door, but to keep her from getting into my closet.

Her "specialty" use to be, get into the closet (sliding doors) and chew just the plastic tip off of the shoestring and only one shoe per pair. Honestly, there was never a time when both shoes had the tips chewed off, just one shoe per pair. There was never a time when the shoestring was chewed up ... just the plastic tip. I wish Nike, New Balance, Merrell would sell the exact same shoestrings for the shoes they sell.

So where this post is going is what happened yesterday. It was time to mow the yard and the normal procedure is to put her in the locked bedroom while I mow the backyard, then bring her outside where she is connected to her 100' climbing rope so she can roam in the field behind my house while I mow the front yard.

For some reason yesterday I decided to let her roam the house with the two basset hounds (they sleep the whole time). After finishing the backyard in about fifteen minutes, I moved to the side yard and glanced into the bedroom window to see if Sadie was sleeping on the floor or bed. No Sadie anywhere.

In my small downsized house there are not a lot of rooms left to choose where she might be but I knew exactly where where she was. I mowed along the front of the house, shut it off and then as quietly as I could I walked into the house and glanced into the room where I have my computer, desk, dog blankets and the large rubber container full of forty pounds of newly acquired dry dog food. Like she use to do in the past while I was getting ready for work, she had removed or knocked off the lid, TWO 15# dumbbells and moved the lid to the side. This lid also locks to the container once you push down on the edges.

Someway she can get them off. The dumbbells are on the lid to keep her from getting into the food, even if I am inside the house. Usually during the time I am watching ballgames in the living room.

As I glanced into the room I see a wagging bloodhound dog tail and her head inside the container eating dry dog food. Luckily I had caught her soon enough to where she had not eaten a large amount and that would decrease the potential for her bloating. Bloating is common in large breed dogs and luckily she has never experienced that. Eating large amounts of food though could set that off. It didn't look like she had ate that much, still it was only an hour after I had fed her the regular meal.

When she saw me she knew she was in trouble and caught red handed. She took off in a sprint to her dog bed in the corner of the bedroom, laying there like nothing happened. With that bloodhound innocent look like asking me "is something wrong"?

Words were not needed ... she knew.

I babygated the closet doors, shut the bedroom door and then went back outside to finish mowing the front yards. It had been one of those days where she didn't want to be outside and would bark until I would bring her back inside, so this time I left her inside.

I began thinking and wondering what she would do or get into if we were in an RV or trailer and I left all of the hounds inside the trailer while I was out hiking, mountain biking or grocery shopping? There would not be a room I could shut her up in if I had a trailer. Temperatures would determine if I could leave her in the FJ while shopping. In a motorhome I could gate her off into the back bedroom where she could still get into things.

This issue with her and me being gone has always been in the thought process, asking myself if she would ever be a good dog to RV with. Would this separation anxiety also determine what kind of RV I would buy?
at September 15, 2014