A Beautiful Day In 'The Tropics' 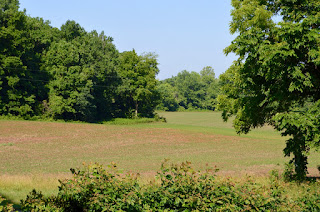 From start to finish today, the day was beautiful. The humidity had dropped enough and the temps had cooled enough after yesterday afternoon storms ... it was great today.

That sunshine I posted yesterday morning didn't last long before the rain showed up for most of the afternoon. Soon after that rain was finished the temps had dropped at least 15° and the humidity had vanished. 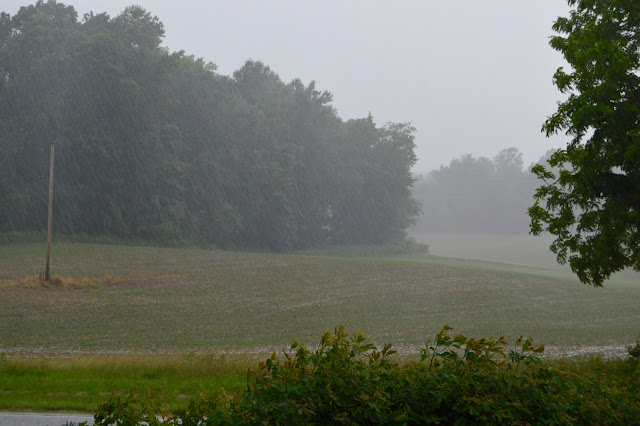 This morning was a different story with the bright sunshine, no clouds, and a slight breeze from the southwest. Yet, not much was done today. A typical nice day is what I call it.

For some reason this morning both hounds take off for the far left corner of the yard .. not really the direction I want them to wander off. It's too easy for them to head toward the neighbors house and too hard for me to find them. I can think of only one time they were actually in the neighbor's yard but each of them have gone too far in that direction a few times. 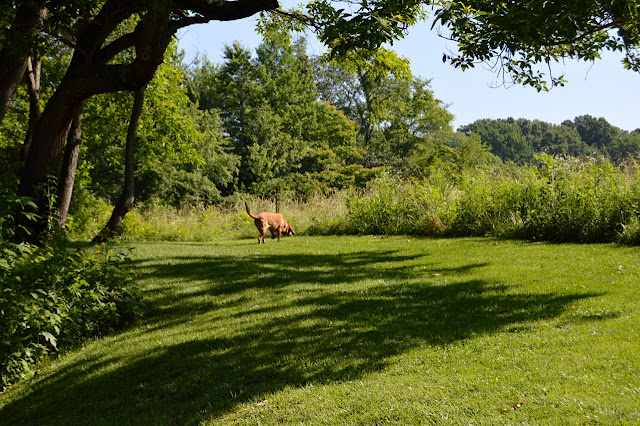 Luckily it was warm enough this morning around 10:30am, that Sadie didn't stay long and sprinted toward the house to get back inside to the air conditioned environment. Stella was at the house waiting for us. 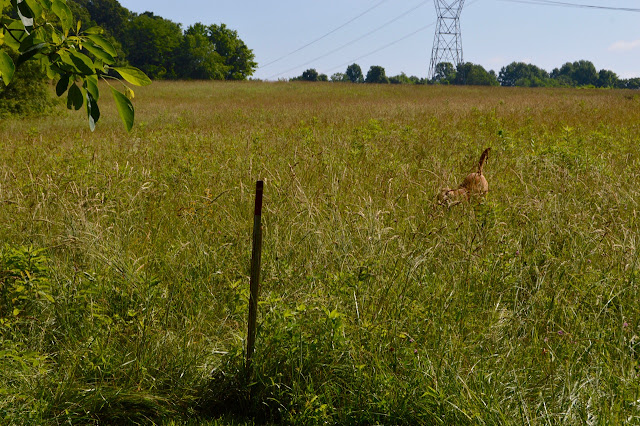 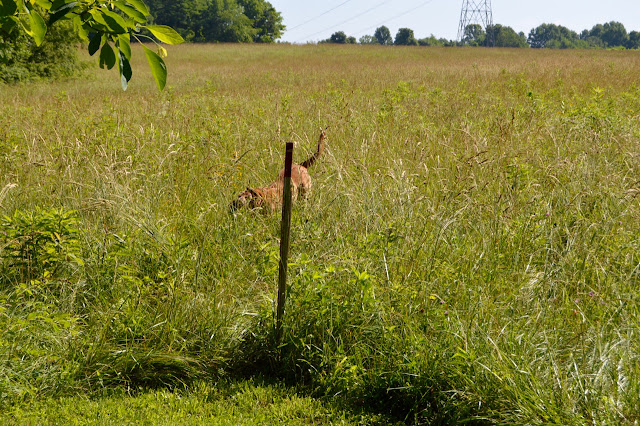 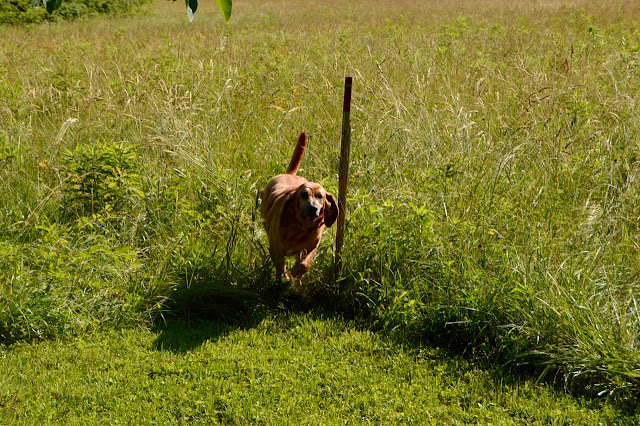 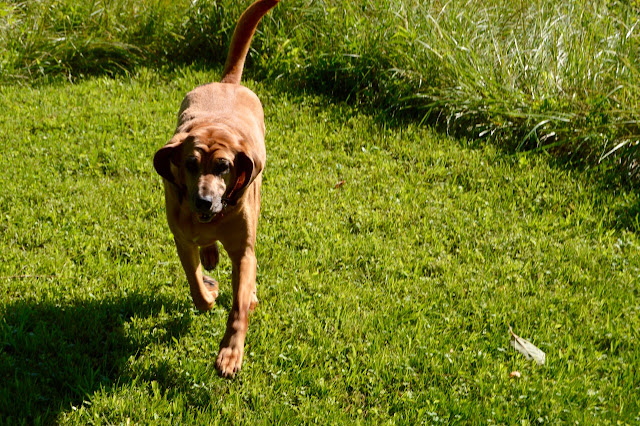 The three hounds didn't do much more than this after lunch. They were more interested in getting back inside for their afternoon siestas instead of wandering the field. Sadie didn't even give me the stare down begging for a walk. 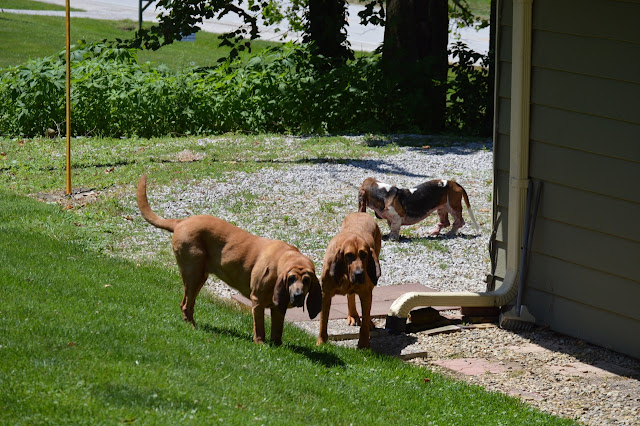 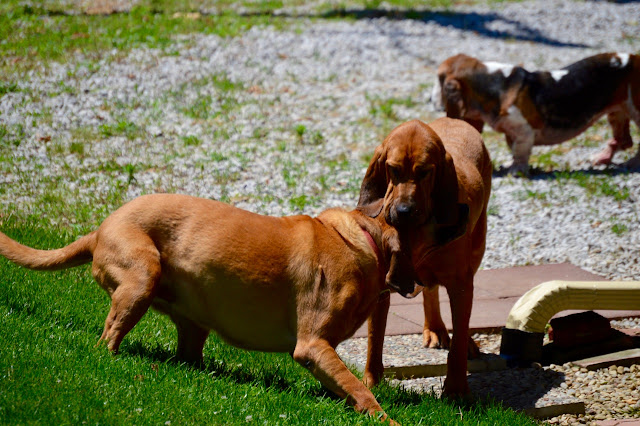 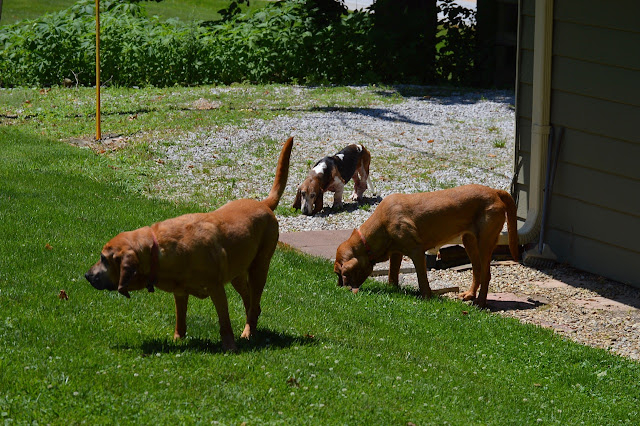 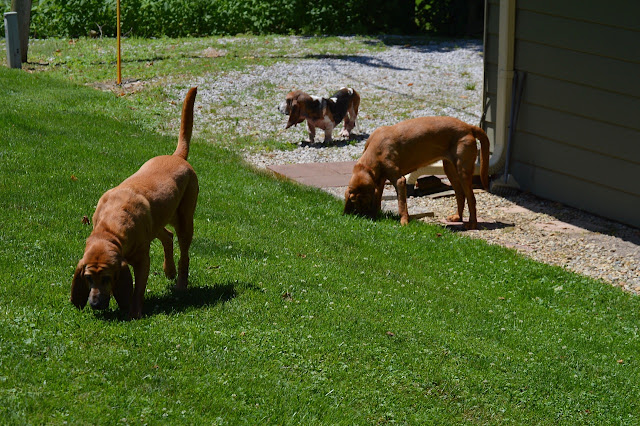 By early evening it was time to take the hounds out. That field looks pretty to many but I am ready for it to be cut and baled. I usually pull of 5-8 ticks off of me after each walk and I have not found any on the hounds. I've only done one dose of Nexgard for them back in late April or early May. 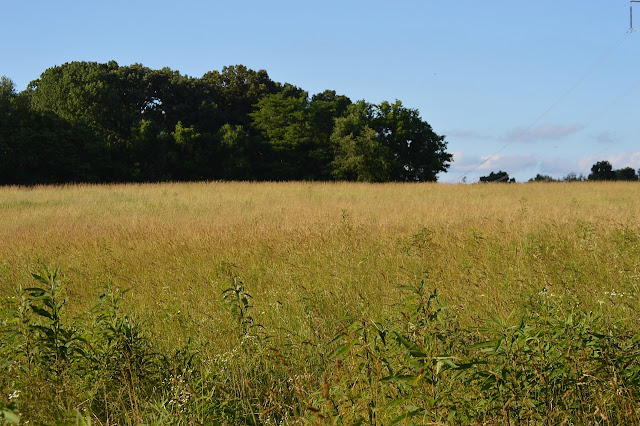 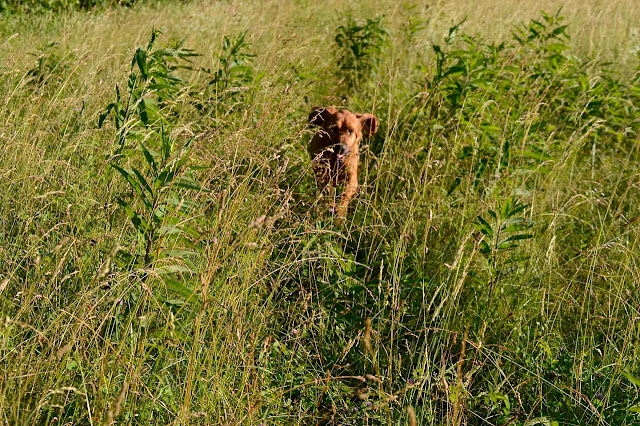 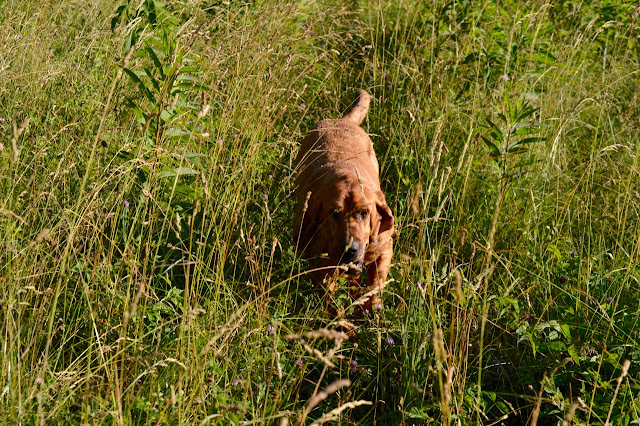 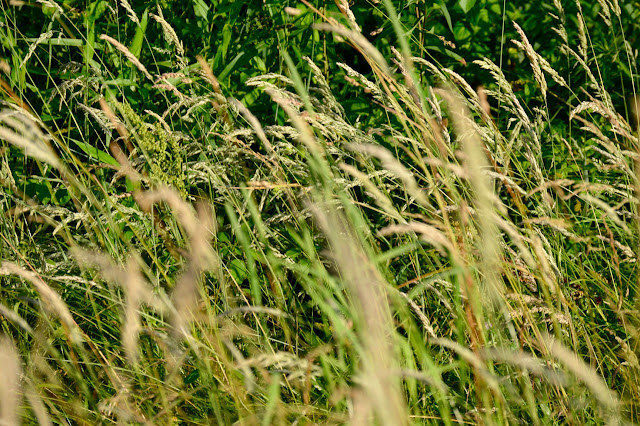 The hay is tall enough that it's hard to keep track of them at times. I've mentioned I'm sure too many times by now. 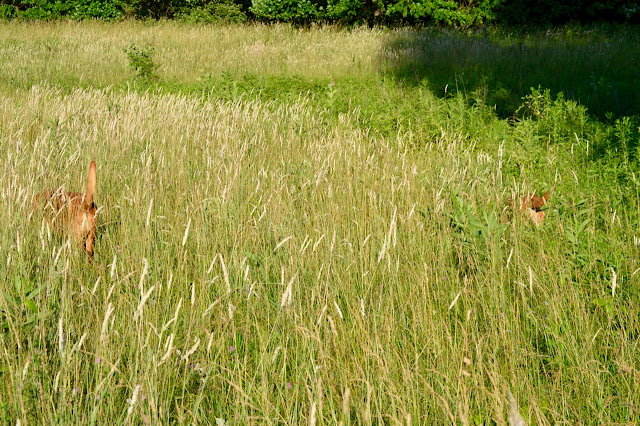 Stella was wagging her tail during these next three photos but I never saw what she had found and she didn't pull up anything from the ground. Those three photos were taken in rapid sequence. 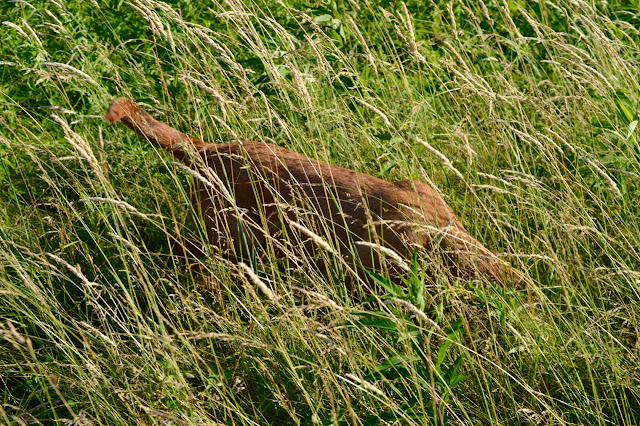 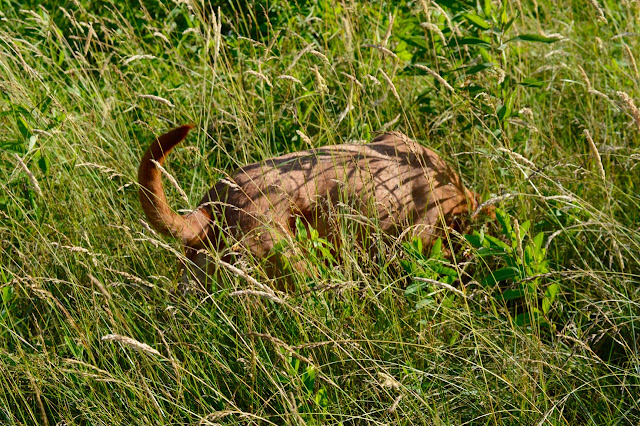 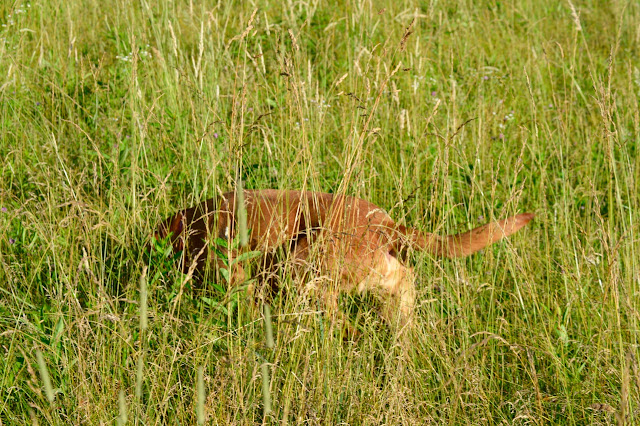 She was coming when called today which was a pleasant surprise. 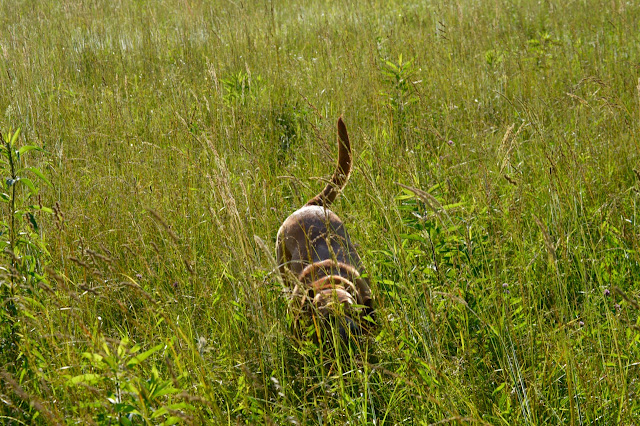 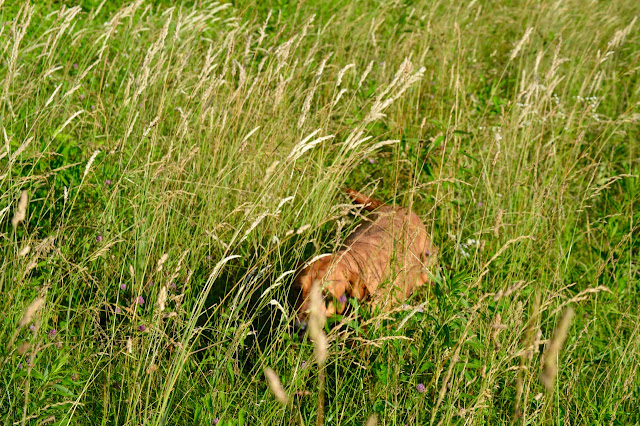 Do you see either one of them?  I don't either. 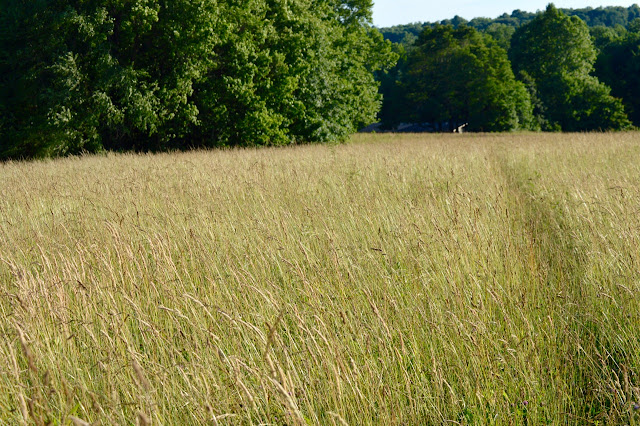 I'm headed back outside to enjoy the nice weather. I can't believe it's already 8:30pm with over an hour of sunshine left.