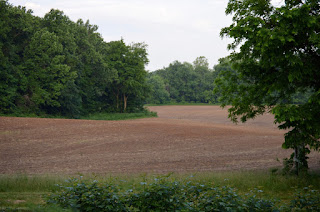 The past two days here in 'the tropics' have been about the same ... overcast skies, then dark with rain and a little bit of sunshine.

Basically if Sadie had not talked me into a walk this afternoon I probably would not be blogging again today ... that is just how slow life in 'the tropics' has been this week.

So I decided this afternoon we were going for a walk no matter how wet, nor how muddy the field might be. The field was pretty dry yesterday before the rains came. 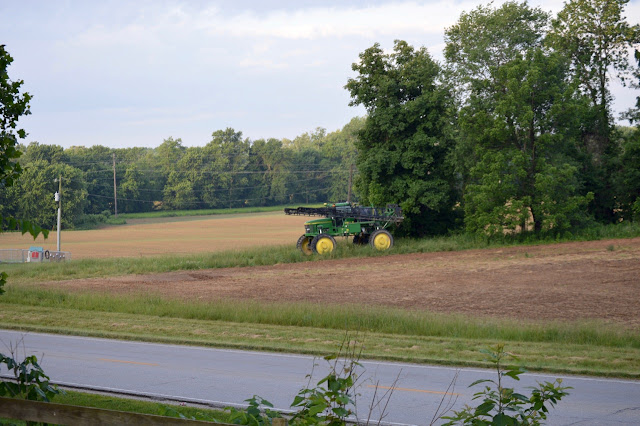 By this afternoon that freshly planted field has multiple spots of standing water. One good thing about the rain ... the high 80's turn into the mid 70's. One bad thing about the rain ... I can't keep up mowing the yard. I don't like to rake after mowing and I don't like to see clumps of mowed grass laying around after mowing ... so I guess there is a decision to be made. 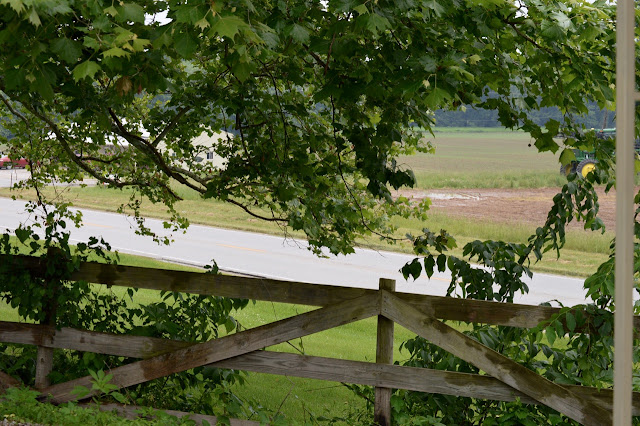 I'm not sure what is here but this has been Stella's favorite spot for the past two days ... over by the burn pile. Really with the weather being the way it's been the past two days, she hasn't gone out into the field except to dump her tanks. 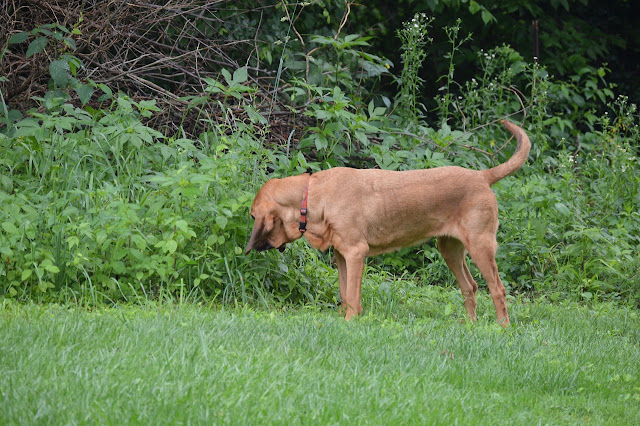 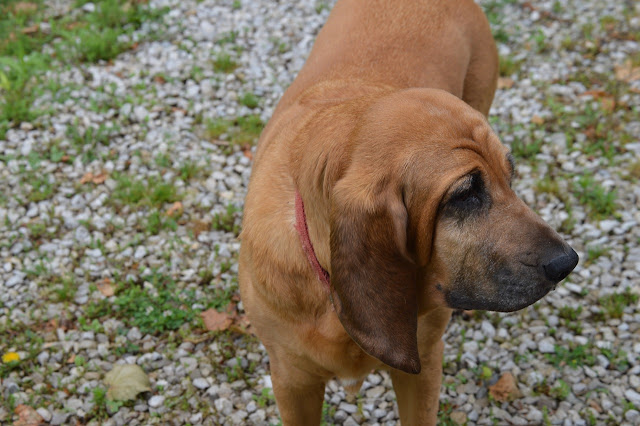 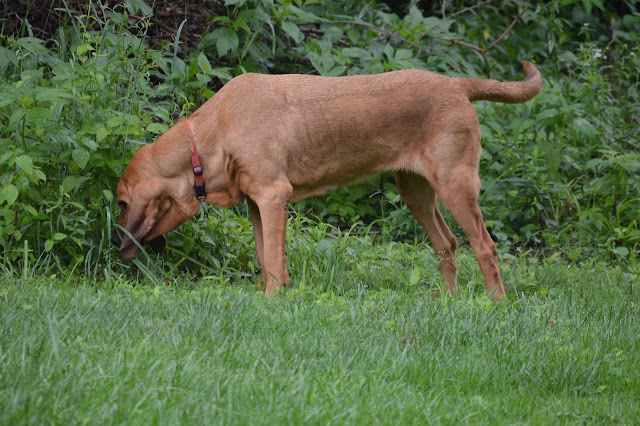 Finally with a restless Sadie I decided to take the walk no matter how wet it was. With my Merrell's shoes smelling like new since they were washed yesterday ... they have been retired from doing any walking in the field when there is the possibility for them to become soaked. I moved my "yard shoes" into "wet field shoes" where it doesn't matter what happens to them.

Both hounds were happy to get out of the house knowing we were going for a walk and not just to stand around in the backyard. Can't you see the excitement?? 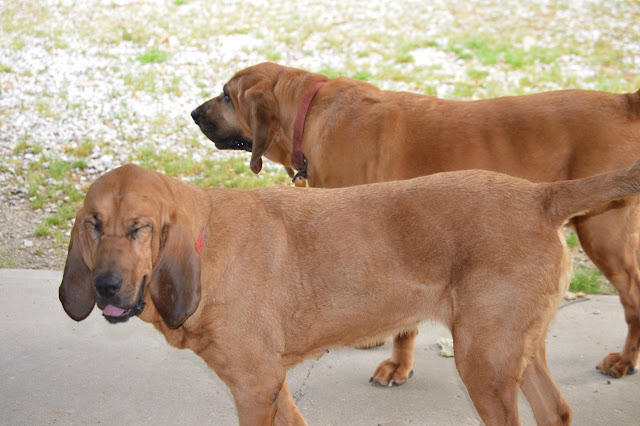 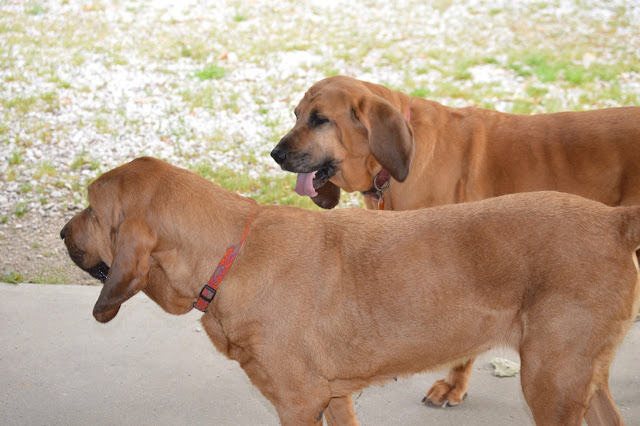 With all the rain and wind blowing the tall hay in different directions, our path was once again barely visible. 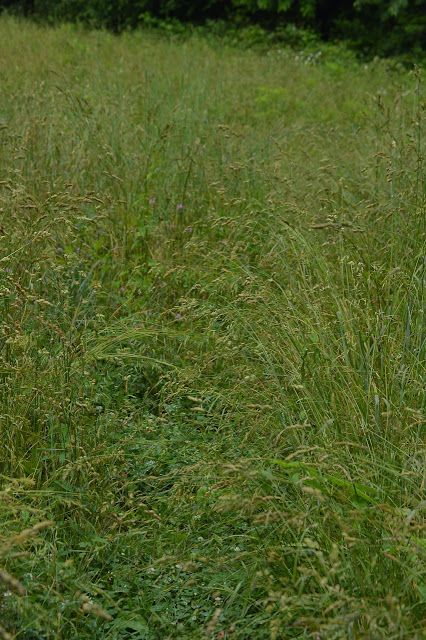 The rain and a little sun though is great for the wild flowers growing in the field. 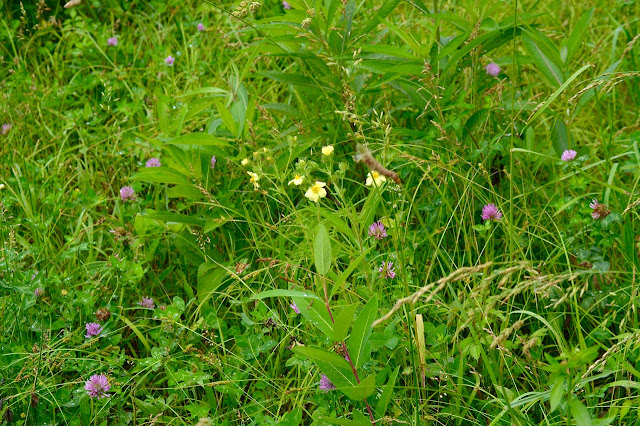 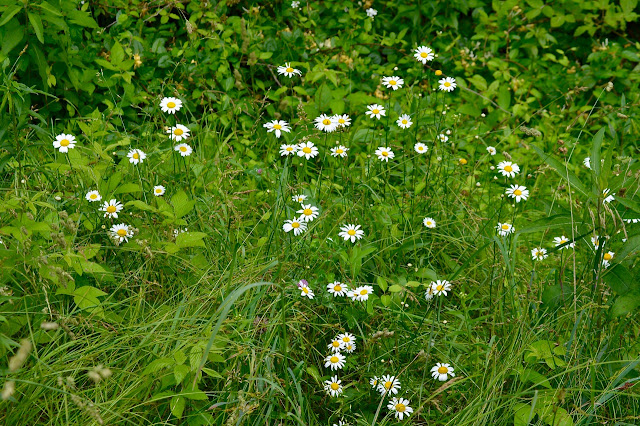 With the hay being the tallest near the yard, my shoes and legs were soaked by the time we finished the short distance to the shorter hay. Water was squishing between my toes, my shorts were wet but with the camera held high ... we continued on as promised.

Neither hound cared about getting wet ... they just wanted to explore the field. 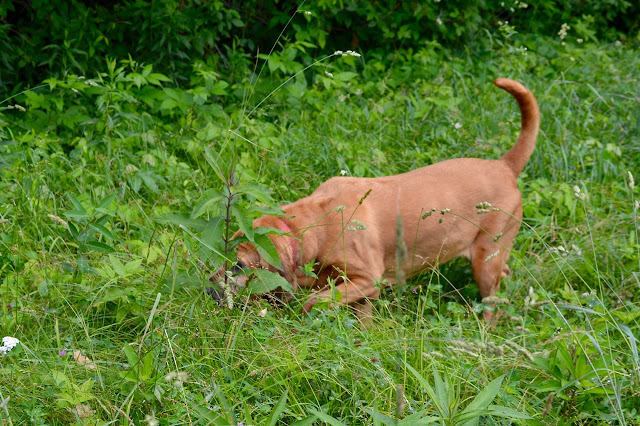 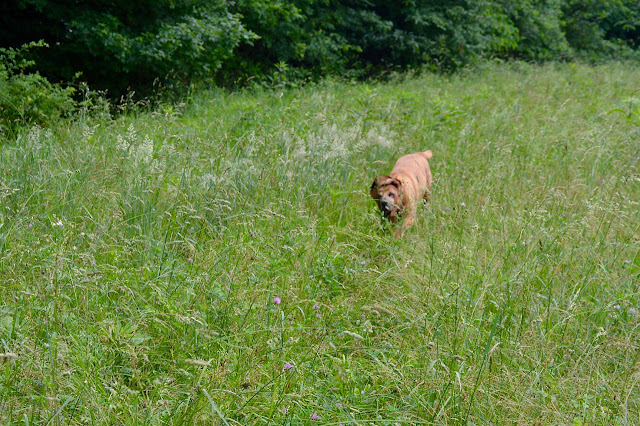 Sadie and Stella get some running in. 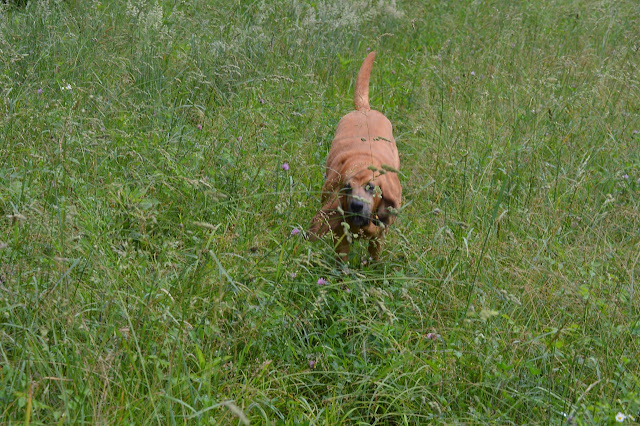 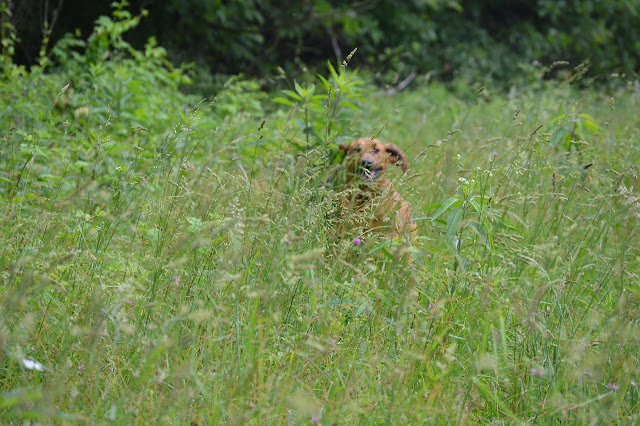 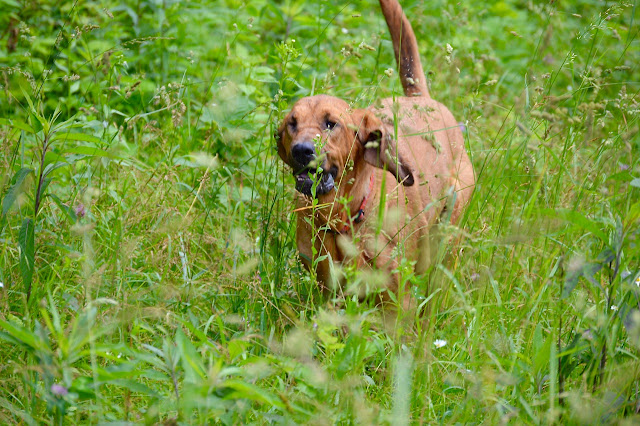 This field looks like they will be getting a bumper crop of hay this year, it's the best I've seen for a while but not as good as ten years ago when it was almost all grass with no weeds. 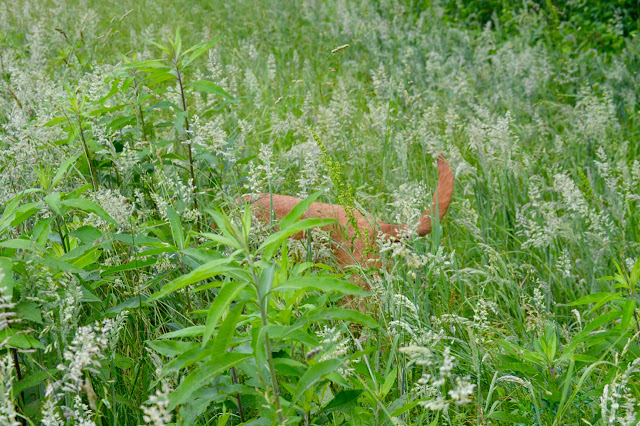 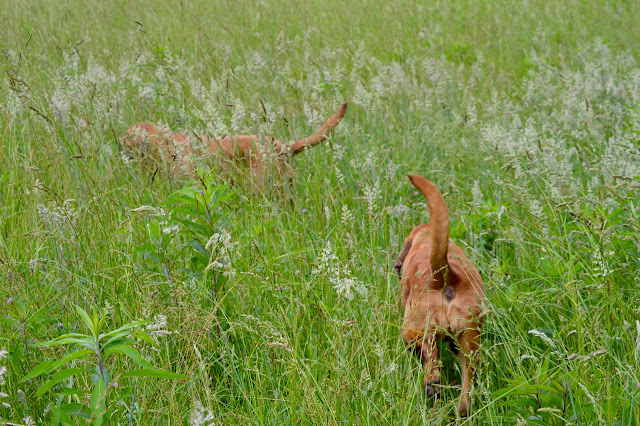 I am going to have to find and download a free bird book so I can start identifying what I am seeing taking off from ground level driving the hounds insane. The bird is small, not a bluejay but a very solid dark blue color. 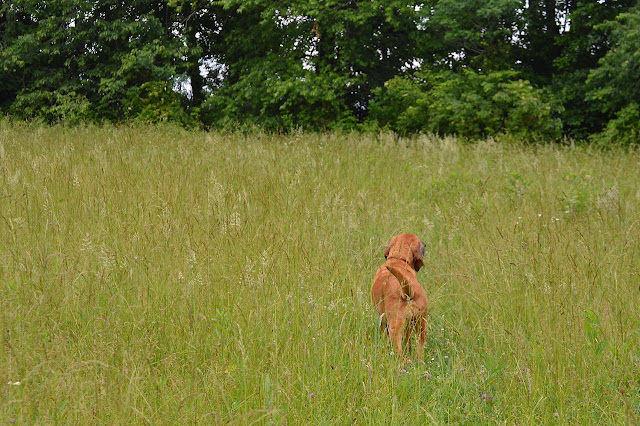 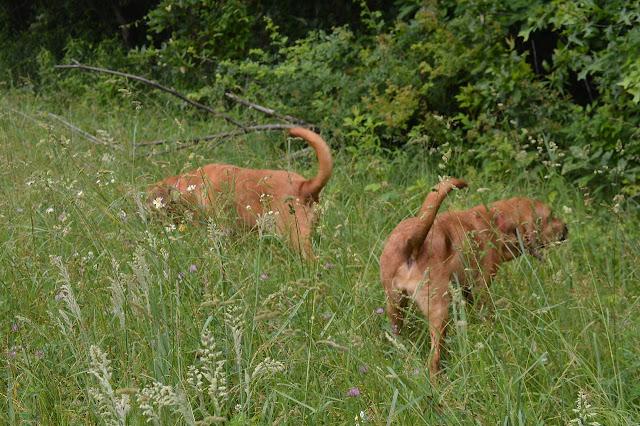 I walked again today giving them both free reign where they could go where they wanted and at their own pace.  During this time the only time I am stopping is to take a photo. 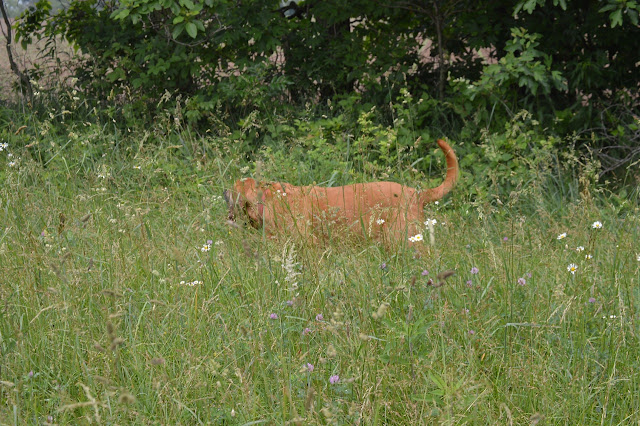 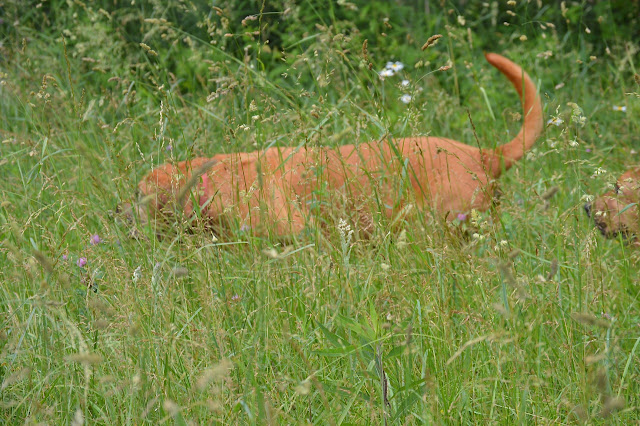 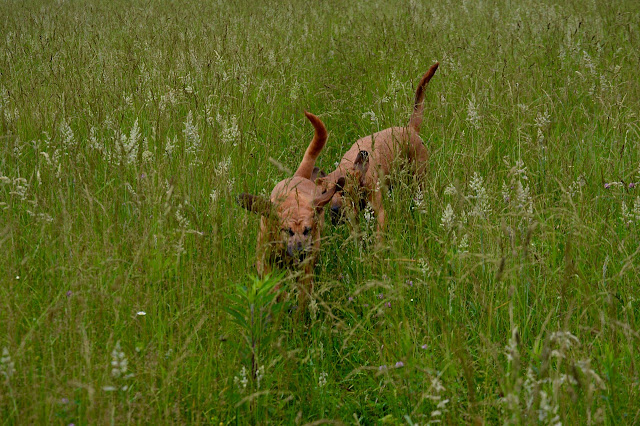 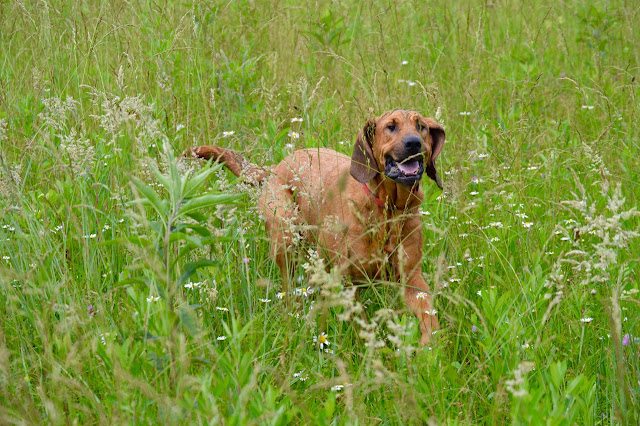 This is their same favorite spot they had a few days ago when they refused to move. Today I told them to "come on" and they both took off running for the house. 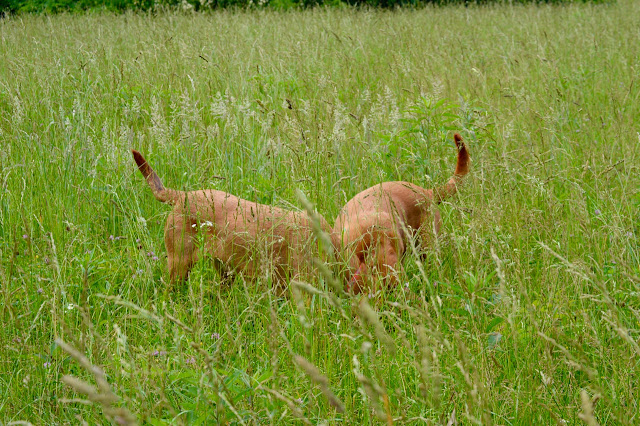 Here are the New Balance running shoe that was designated my "yard shoes" 2-3 years ago. I didn't buy them at the time to run in, I bought them for comfort. I found out later that the sole design was perfect for yard work, where I would not slide on wet grass, could keep stable on the side of the bank and were ... comfortable. 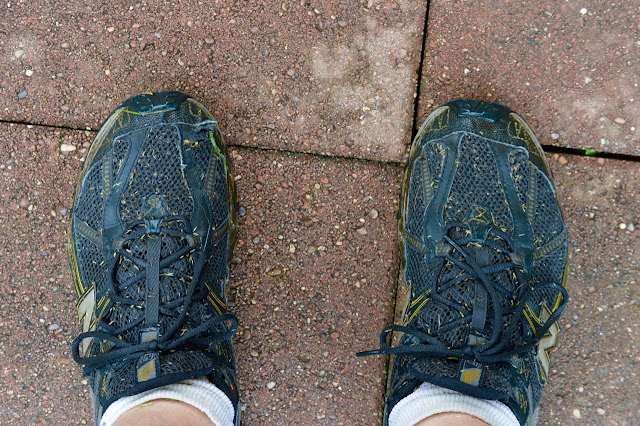 Now for some ranting.

Yet the guy has been nothing more than a greedy prick.

I've deactivated and even deleted my Facebook account more than once over the years. The 14 day period gives everyone a chance to log back in and keep their old account intact but once that 15th day appears your account is permanently deleted.

I started getting a little ticked off when last winter he, Microsoft, Google, were all bashing the government on their "spying" on US citizens ... while it was known by their own admissions they did the same thing ... only they were doing for setting up advertising and generating billions of dollars in profit for themselves.

Yes ... they pay taxes, and they donate millions of dollars to charities but that's not my point.

Zuckerberg liked making comments about the wall being built on the Mexican border yet the asshole has a huge wall around his property and in the past week it has been announced that not only is he buying his neighbors out for their land but a few will get a new house built on his dime.

If you don't like walls, don't build them. But I let that go and kept reminding myself why I used Facebook. A couple of days ago news hit airwaves that Facebook was doing more than just spying on what their clients did on Facebook ...

They are in your smart phone as long as it's turned on and you have not changed any of the default settings. They are in your tv if you have the internet connected. They are everywhere in your life because Mark decided a long time ago that he would share your life all over the world so it can be more open and connected, then we can all be friends, a nice globe full of "safe spaces" and the skies will fill up with rainbows and unicorns.

One big happy family. You didn't even have to ask, Mark decided to do it for you!!

Now for me personally, Facebook is probably not in my life too much, besides what groups I 'liked' or the photos I posted of the hounds and the few comments I made on Facebook. Deleting my Facebook account is a good start of getting that creep away from me and the hounds.

Why??? Because I haven't had a smart phone since November 2015 and I don't have the internet hooked up to my large screen tv. When you pay for limited monthly internet data ... internet on the tv is a huge waste of data and I'll not pay for it.

They are even into the Google game of tracking the websites you go to even when you are not logged into Facebook so they can gear specific advertising to your interests ... even if you are not on Facebook.

I got finally tired of Mark Zuckerberg's bullshit and will do the least amount possible for him to play his game with me and the hounds. I know it's far fetched but all of what's going on now was far fetched 5 years ago ... so ask yourself what is next ... if Facebook can access your smart phone, your tv and listen in on phone conversations and read all of your Facebook messenges, what keeps them from getting into your bank accounts later on ... then claiming it's all their part to make the world a smaller, safer, likable place.