Stella Was Fine While I Was Gone 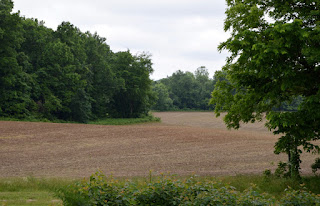 All of the storm predictions didn't happen Saturday but it did rain hard and long with raindrops going straight down. With added wind I was happy that I had decided to put the car cover on the Z4.

With that type of day, the hounds and I hung out inside. They slept, I read books, played Gran Turismo 5 and watched the IndyCar race in Detroit.

I didn't take hardly any photos and there was nothing really blog worthy yesterday. Today was a 'normal' day and nice enough to get outside. The hounds were up early, like before 7am wanting to eat. You would think I was starving them by the amount of excitement and energy they have when I get ready to feed them. 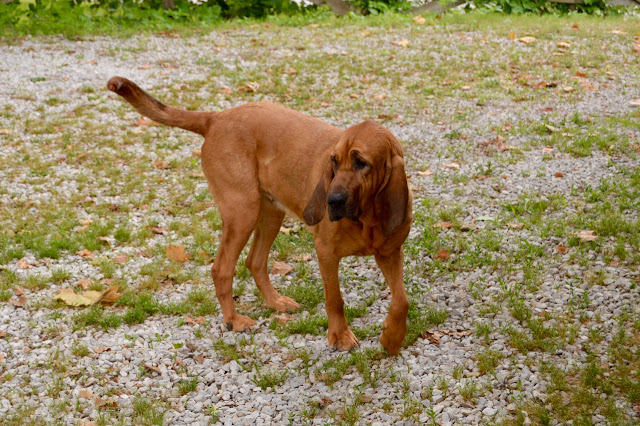 I decided today to get in a hound walk before their lunch and before I took a nice Sunday drive with the top down under overcast skies. Heidi still did not want to go for the walk and she had moved all of her blankets into a prime location ... she has been 'living' there the past week. 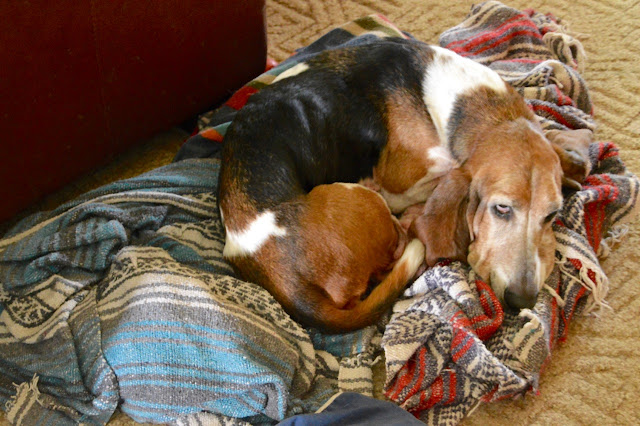 Even with the chance of a wet field Sadie, Stella and I were on our first walk of the day a little after 11am. Rotating two different pairs of shoes is working out well with the field wet almost everyday until early afternoon. 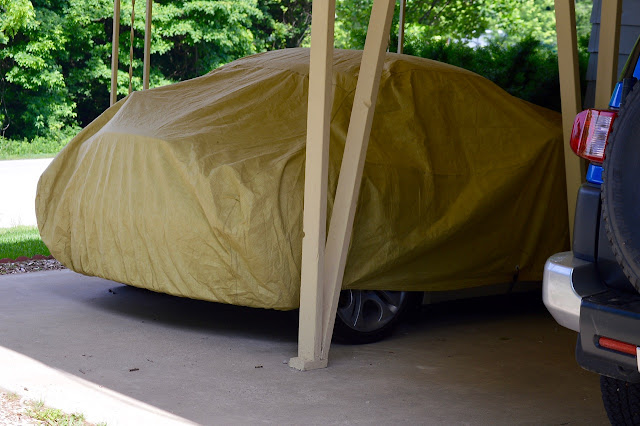 With all the rain we had yesterday I was expecting possible muddy areas and wetter than normal but that didn't turn out that way. It was much wetter last Thursday morning. 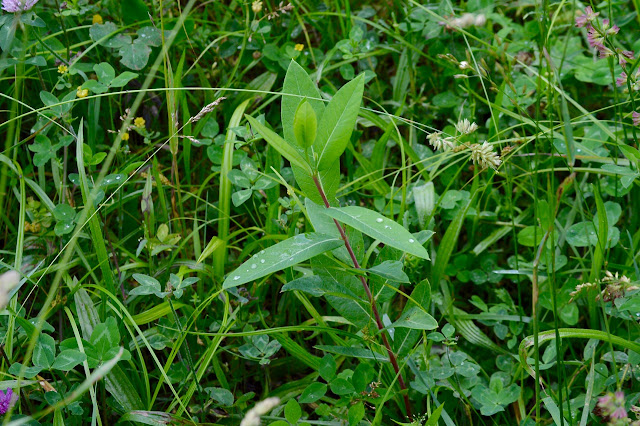 As usual the hounds were happy to get out and had their noses buried in the deep hay all the time. I let them go at their own pace and where they wanted. Both of them did very well running loose and I didn't have to yell to keep them from running off. 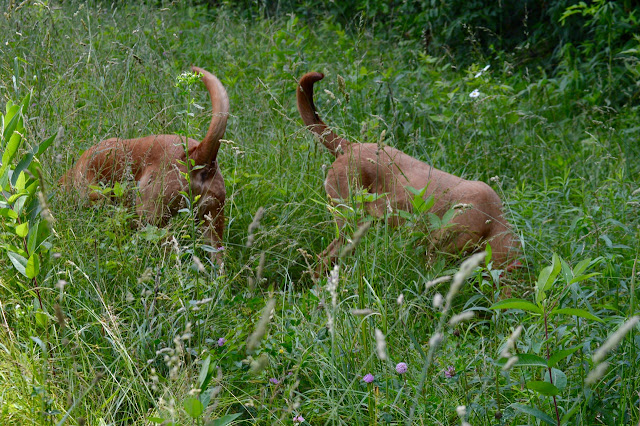 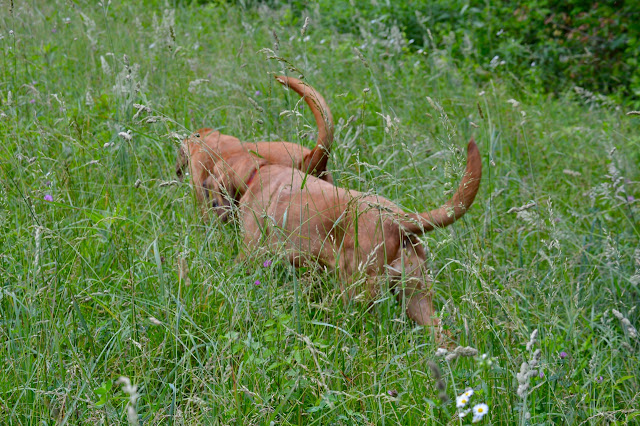 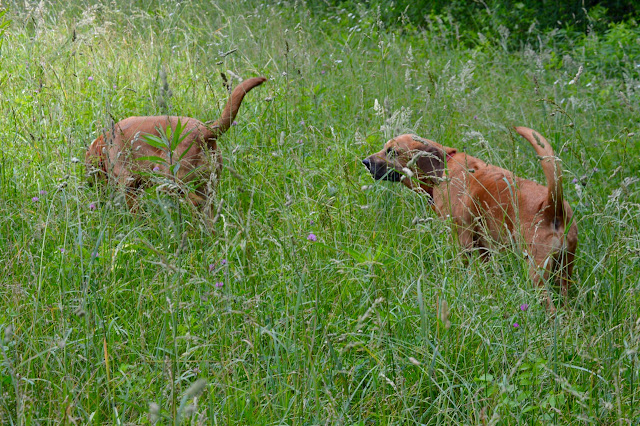 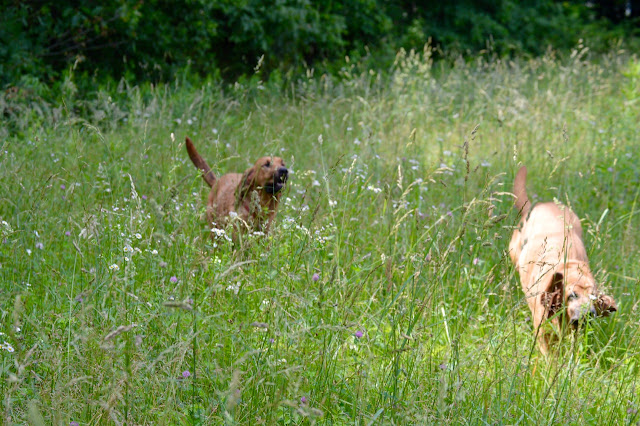 Out of curiosity I changed my camera setting before these next photos. I wanted to see if it made a difference. So, with a few clicks on the menu I went from Auto-Area to Single Point. I think I can see a slight difference in the focus of the hounds instead of the surrounding area ... like the tips of the hay. 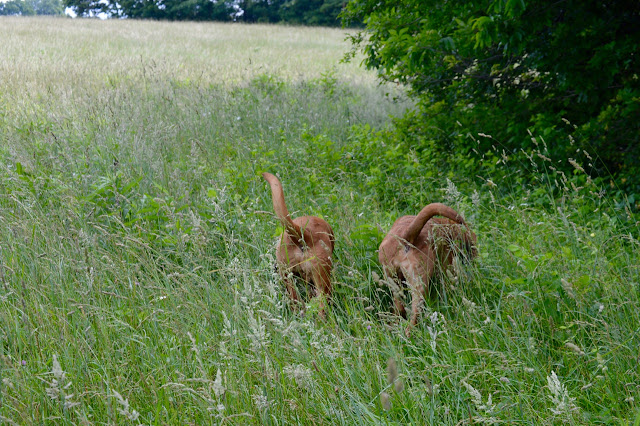 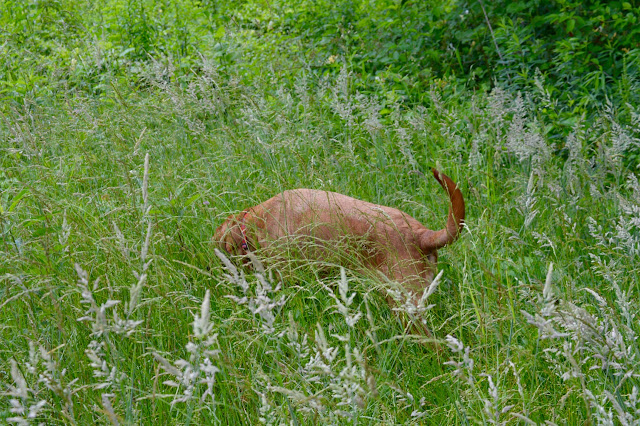 Sadie found something she that was so good she didn't even look up at me when I walked by her. I did not turn to see what it was as I walked past her. 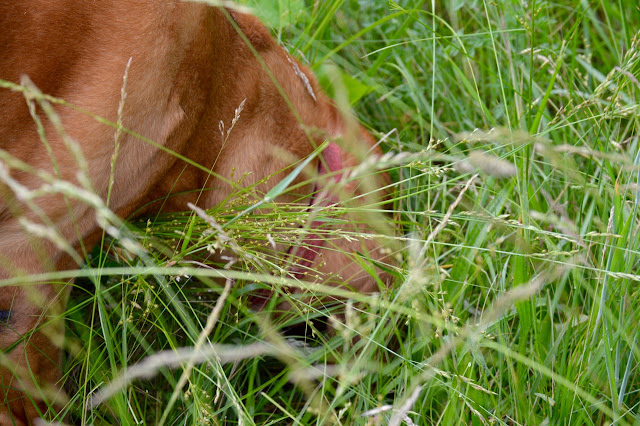 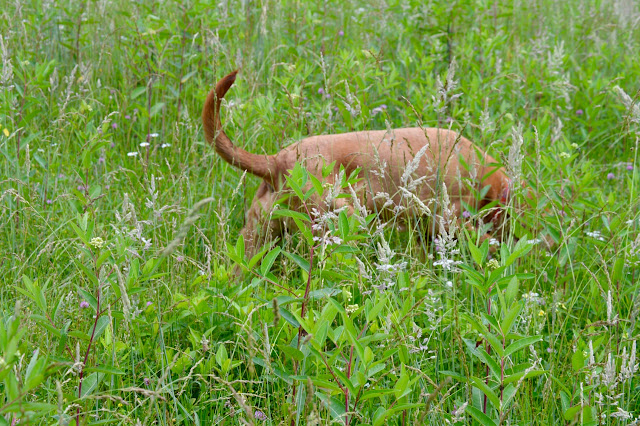 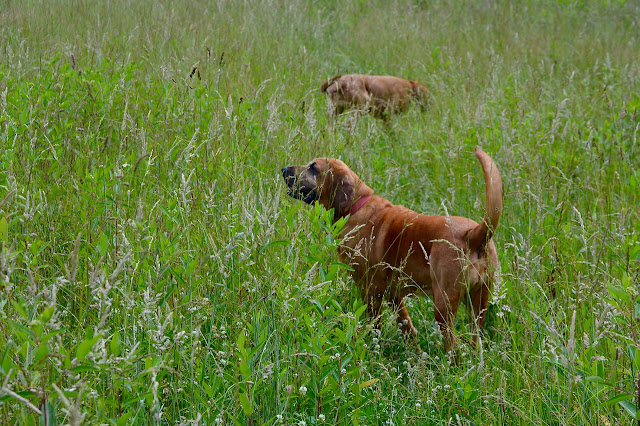 I was in the process of getting a really good photo of Stella running ... the SD card was full. So we finished our walk this morning with no other photos. Since I have them backed up on my computer plus a external hard drive ... I reformatted the card after downloading the photos on this blog so far. With the size of photos, the 32Gb card holds about 8,000 photos. My file date showed me the last time the card was full was last November.

I had planned yesterday while it was running that I was going to take the Z4 out today for a drive. It would be another test for Stella's separation anxiety although the last 7 out of 8 times she has been perfect. I still set up the room for her to succeed though, taking no more chances with her escaping.

I was back home after a drive lasting an 1 hour and 8 minutes. Nothing had been destroyed, chewed on or moved in the bedroom. With the cool temps in the low 70's today, I left both windows open about 3" but I also put a pedistall fan in front of one window in the rotating mode and moved the bed out to the center of the room with the small camping locker blocking the bed from the other window. They had plenty of room left to play, move around and for Stella to stand on her back legs and look out the window.

Stella didn't have a way to stand on the bed and crawl out a window. They had fresh air, water and all their Kong balls and bones. It may have helped I fed them lunch right before I left so most likely she and Sadie slept the time I was away.

Heidi's skin looked really good this morning, maybe the best it has looked in many months. The strange thing is after I gave her the Epsom Salts soak this week I did NOT apply any Water/Vinegar mixture. I am going to give her another soak and see if those weekly soaks work better than apply that vinegar mixture.

I've played a lot of Gran Turismo 5. I have regained my 'touch' and am at the Professional Level which is the 3rd of 5 different performance levels. As you play, money is earned for new cars, tune ups, modifications plus you can win free cars that you may need to qualify for different races, even at the Beginners Level.

It will be a week of beautiful weather here in 'the tropics' of Southern Indiana.
at June 05, 2016