A Nothing Day Today 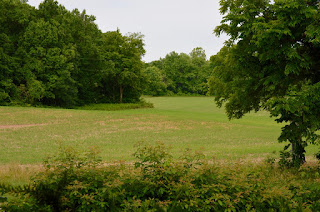 Nothing too exciting today here in 'the tropics'. The day started slower than slow and didn't end much faster as the photos will show.

There were a few minor changes today ... some to this blog, some additions to my Feedly account, some more ideas of traveling with Stella and general day dreaming.

The biggest and most enjoyable change today was the "heat index". That dropped around 15° and made a huge difference in the comfort level inside and out. Less air conditioning was ran today and the afternoon hound walk was more enjoyable ... even at a leisure pace. 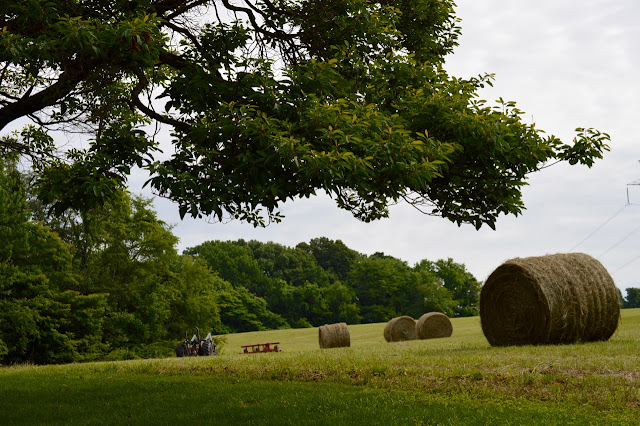 Sadie was giving me that "stare" to walk this morning but at the time I took this photo I had not had my first cup of coffee ... so we weren't walking anywhere, except back inside to pour that first cup. 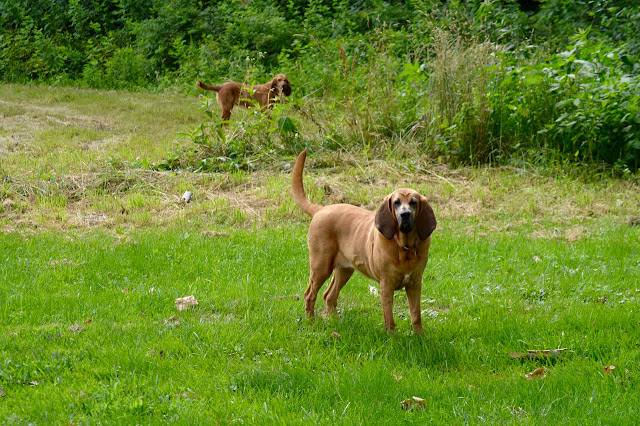 I saw a lot of blue skies today but it had a feel of being overcast most of the day. The rain is unpredictable but that doesn't really matter while all of us hide out inside to escape the afternoon heat. 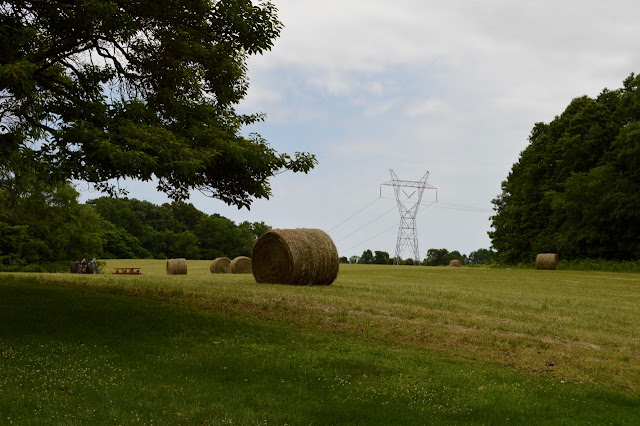 Not sure where he was head but he had highway traffic backed up longer than the traffic laws allow and really nowhere to pull off to the side if he passed the intersection just in front of him. He passed that turnoff and the line of traffic slowly passed by the house. 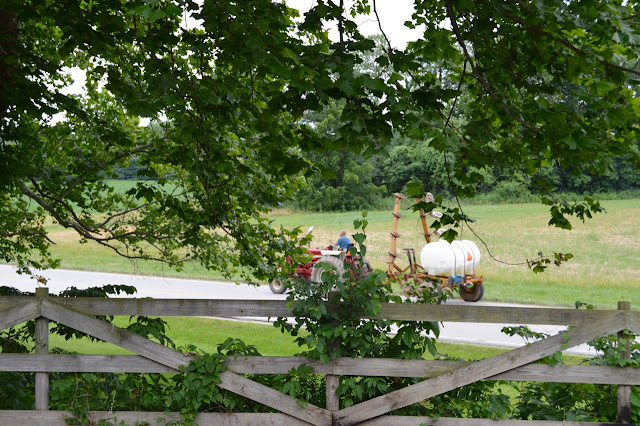 After the hounds had lunch we did the normal trip outside. Heidi wasn't out longer than 5 minutes before she headed back to the door for me to let her inside. Stella decided she would sleep there because she was sleeping right before lunch ... she likes sleeping anywhere. 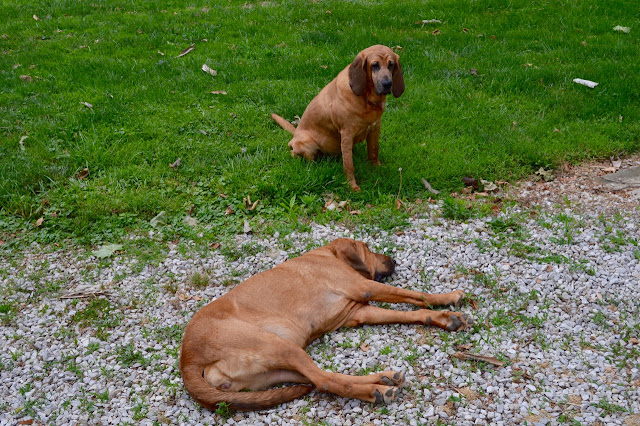 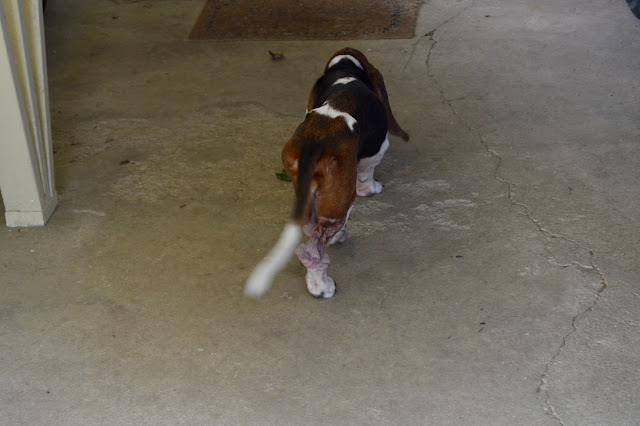 Sometime a little before 4pm I decided to do the afternoon walk. The weather seemed okay temperature wise outside, I needed something to do and the hounds are willing to walk anytime I grab the camera and say "lets go".

It might be just me but it seems that since the field has been cut and baled, the hounds spend more time with their noses in the ground than anywhere else. 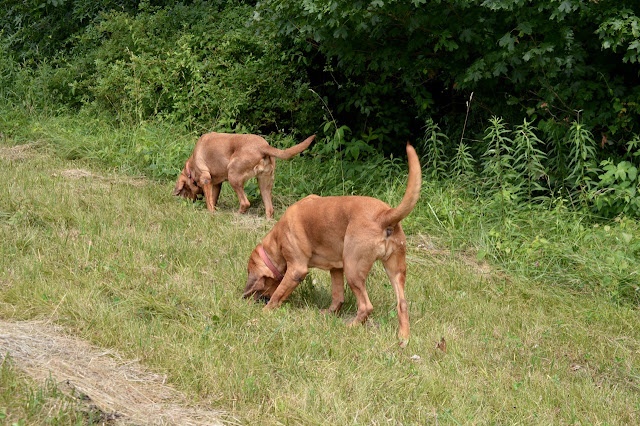 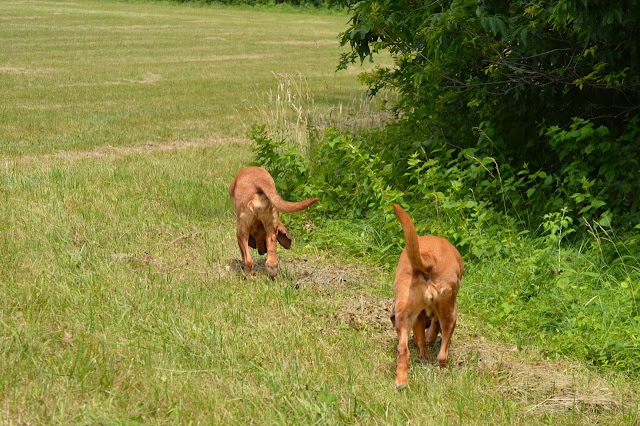 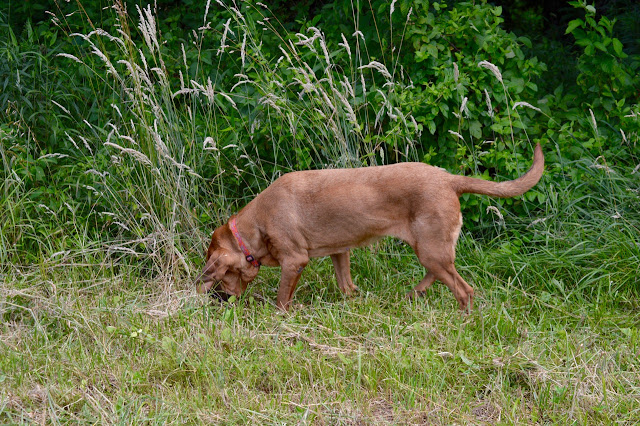 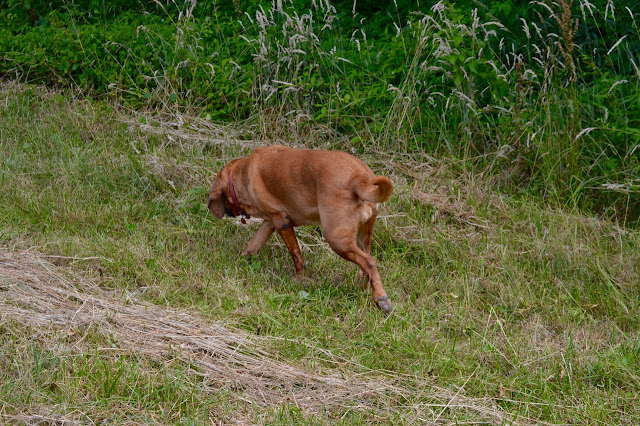 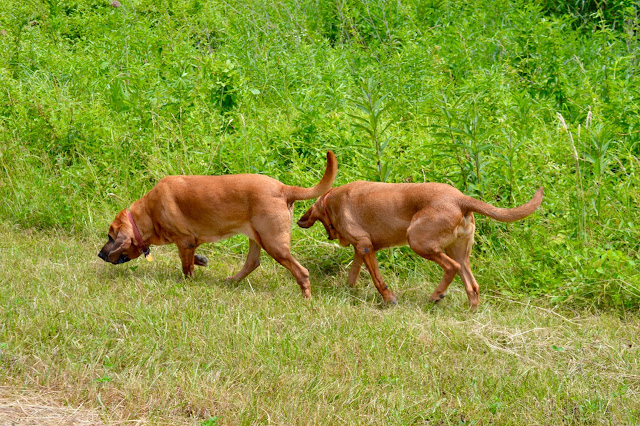 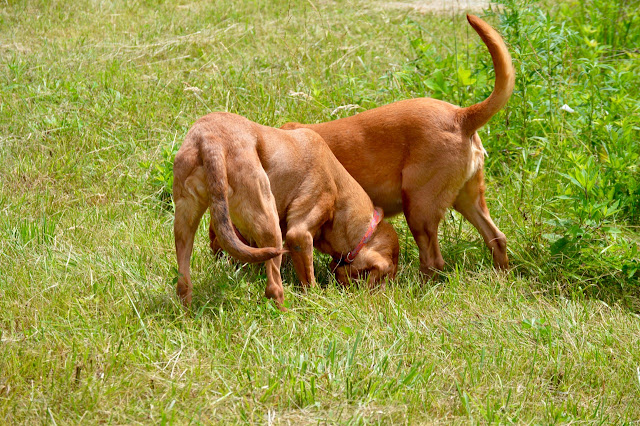 Stella wasn't happy that I called her before she could walk into those woods. She started my direction but took her sweet ass time doing it. She has been pretty stubborn this week for some reason. 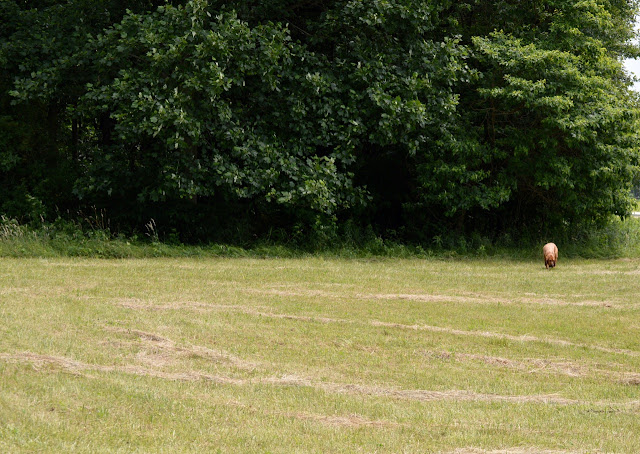 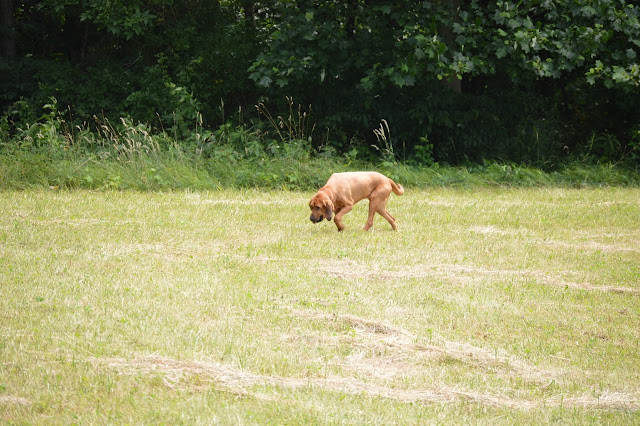 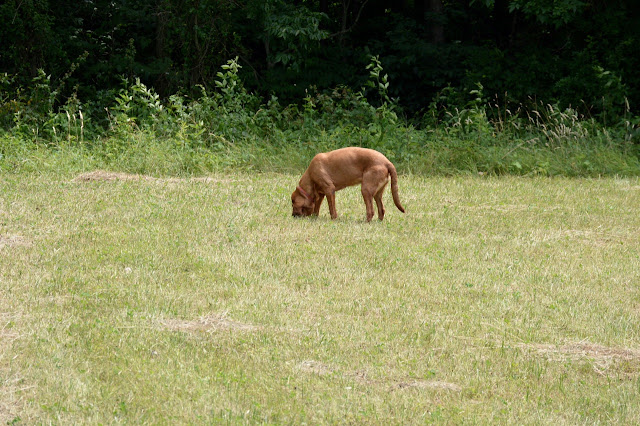 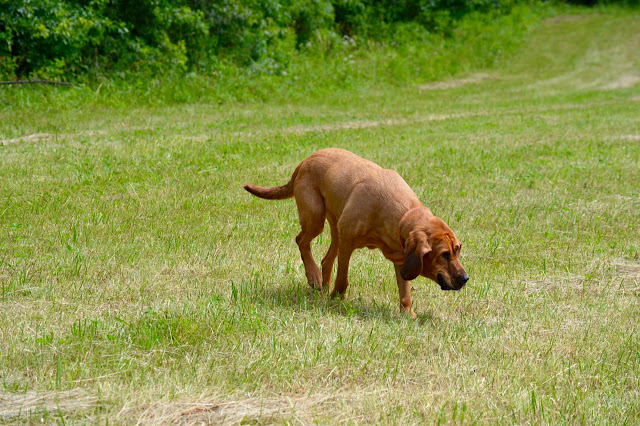 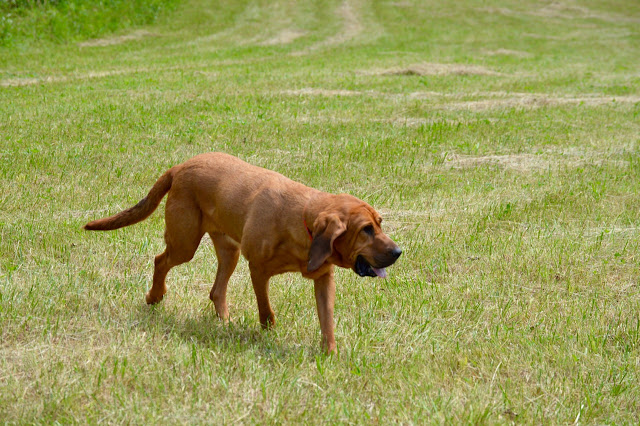 I did one more look at this last roll of hay they had here and there is not a string to bind it with anywhere. Just a roll of hay that is slowly falling apart. 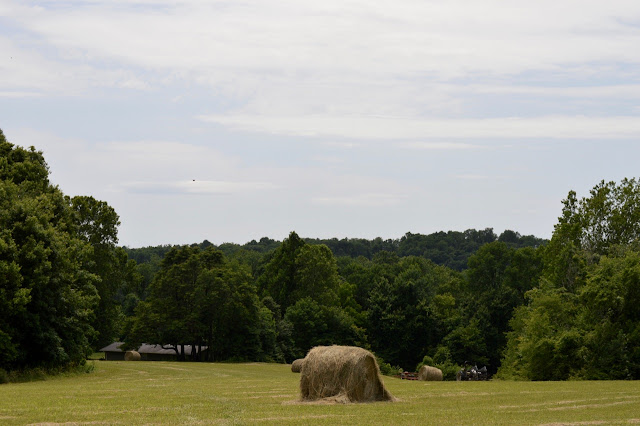 Stella made one last attempt to sneak off into her "no fly zone" but once again slowly walked in my direction when I called her. When I say slow, I mean slower than slow. I've never seen a hound that walks as slow as she does. 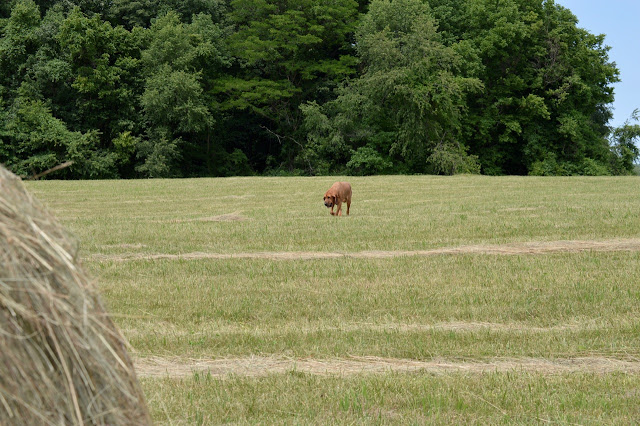 They brought the red trailer last night right after we finished our walk. Probably a good thing because Stella would have been real interested in meeting their springer spaniel they had in back of their truck. Something seems to be wrong with the tractor but didn't see anyone today working on it, the few times I looked in that direction. 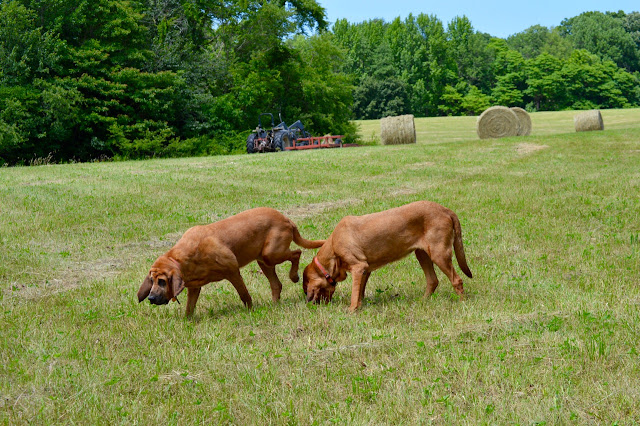 I've been thinking today of going back to a vegetarian diet. Last year I started Paleo Diet and lost a little over 20 pounds but never felt comfortable eating as much bacon and red meat as they recommended. I've been adding brown rice back to my diet which the past 6 months has had more chicken and salmon and less red meat.

As you see I started playing with the blog template today. From the choices of Blogger templates there isn't one that gives me everything I want in design but the one I changed to gave me more things I wanted than the one I have been using since January. Let me know of the fonts are too small for you to read, since I did decrease the page font one size smaller.

I am not finding any ticks on Sadie or Stella after our walks since giving them NexGard in April. They still love me though, as I pull off 4-5 after every walk. With the record heat out west, my friend in Phoenix says the scorpions are out in full force ... I think I'd rather have the war against ticks here in Southern Indiana.

It's that same time of year where I think of making some travel plans. I always wait too late and by this time it is really hot in the majority of the western states. That puts my choices up towards Montana, the Dakotas or the Pacific Northwest. I was planning to head that direction last July but Heidi became sick a few days before our departure. The vet needed for her to stay here 30 days before she could travel.

Of course last summer I had different hounds and a different combo. I handled the one bloodhound and two basset hounds with no problems in Rest Areas or off in a grassy area when refueling. All liked the tent, they slept most of the time I was on the highway.

This year Stella makes it a little different situation. One is because she is a large hound and I've gone to two bloodhounds and one basset hound. Here at home even two bloodhounds at times are hard to handle when they were both leashed when walking last fall. Plus the few times I have taken Stella with me to buy dog food in Bloomington I've let her out on a leash before we head back home.

With that store being on a busy four lane street and new surroundings, I found Stella to be a little skittish when I had her out on a leash. The traffic noise spooked her and she had the urge to take off running if I did not have her on that leash. She couldn't wait to get back inside the FJ.

Most likely a lot of her anxiety is from the times she had moved in her first six years. So if I am serious about traveling this summer, I need to load the hounds up in the FJ, with my standard 6' leashes and drive about 70 miles to the freeway and head to the nearest Rest Area to see how Stella would handle that. I know Sadie and Heidi would do okay in a Rest Area stop.

I think I'll go study cameras and see if it would be worth buying the Nikon D3300 at a discount price since they are discontinuing that model this summer.

Overall it was slow but a good day here in 'the tropics' of Southern Indiana.
at June 21, 2016
Email ThisBlogThis!Share to TwitterShare to FacebookShare to Pinterest
Labels: Diet, Dull Day, Nikon D3300, The Daily Dog Walk, Ticks