Prepared For The Next Thunderstorm 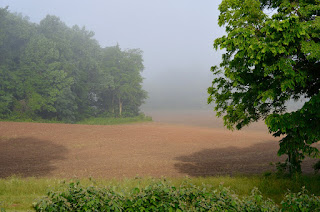 I thought it was pretty cool to wake up to some fog around 8am. A little later than normal but the past couple of nights I've been up way past midnight playing an old game of Gran Turismo on my Sony PlayStation 3.

Rain was forecasted for Saturday, starting a little past midnight tonight but looking at the radar at 5:50pm there is plenty of rain nearby ... maybe within the hour. 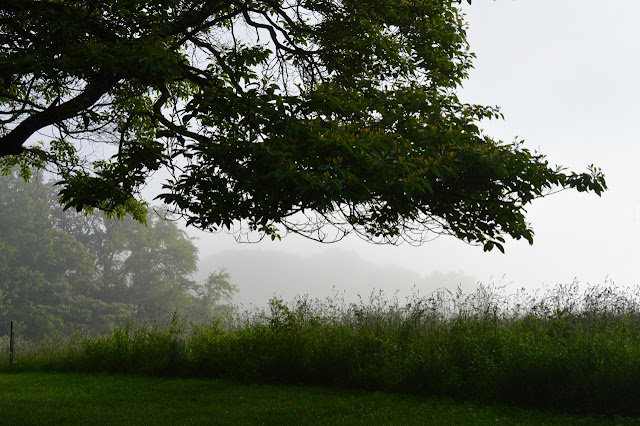 With a late start I was still able to fit in my two cups of coffee while the hounds slept. Maybe this weather is heating up enough that it's zapping their energy also. Besides reactivating my Facebook account this morning I looked around at the internet browser Opera. I like it and have been using it for the past couple of days. I'll not go into the details but you can read about it on the net. It's an older browser company actually .. since 1997.

After the hounds demanded an early lunch, not caring that they just had breakfast a little more than 3 hours earlier ... we headed outside and touching the grass told me it was too wet to mow. The sun was out but not what I would call blazing hot, which is what I needed to dry the yard out. I decided heck with it ... time for a hound walk.

I added a 2nd shoe to the "wet field" walk. A pair of Nike's that I bought too small, but are still comfortable. As soon as we hit the shaded areas of the field I was soaked again. 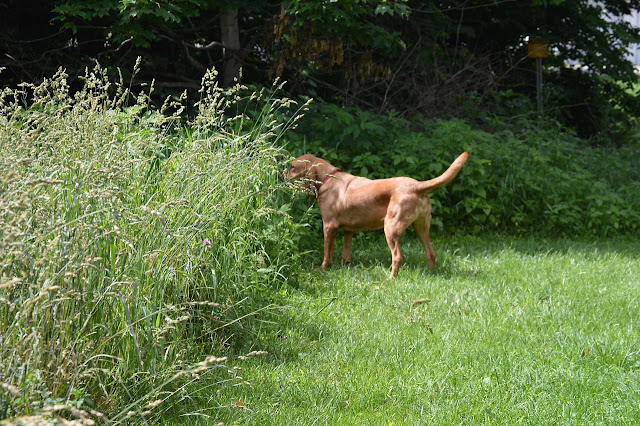 Stella had hung back on her new favorite corner by the burn pile. She then realized that Sadie and I were already gone. It didn't take her long to catch up. 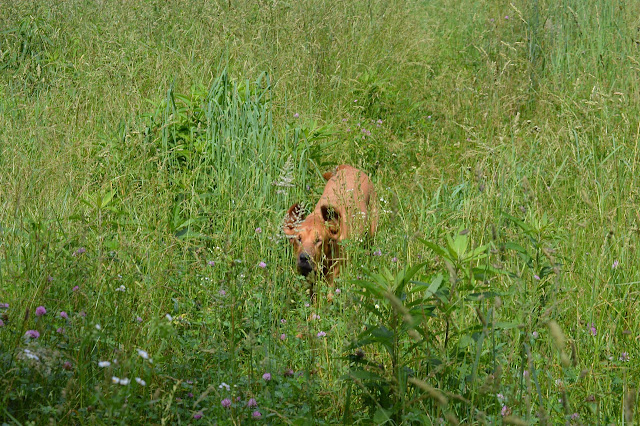 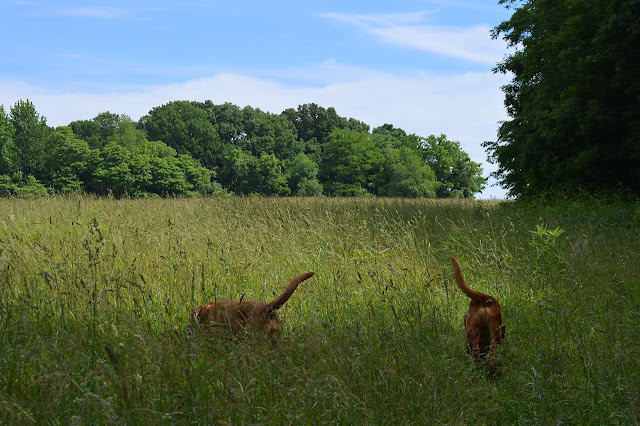 Just like that both hounds disappeared into the hay, while I continued to walk at my pace. 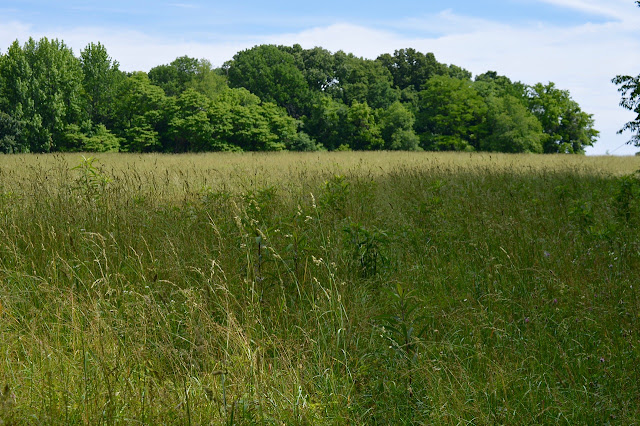 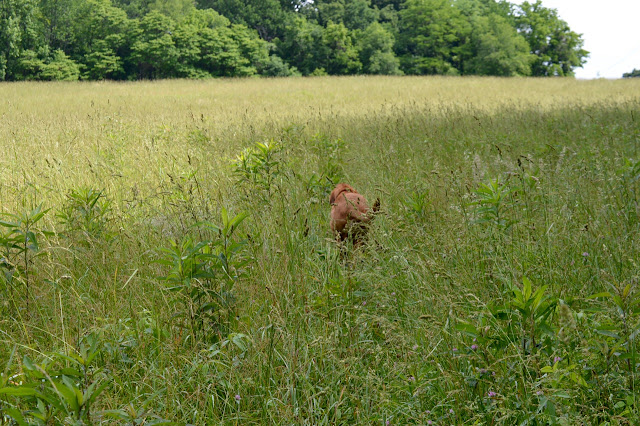 Sadie was after birds again. She never catches them but loves chasing them. That's good for her to get her running in to keep her weight down. Notice her ears are wet. 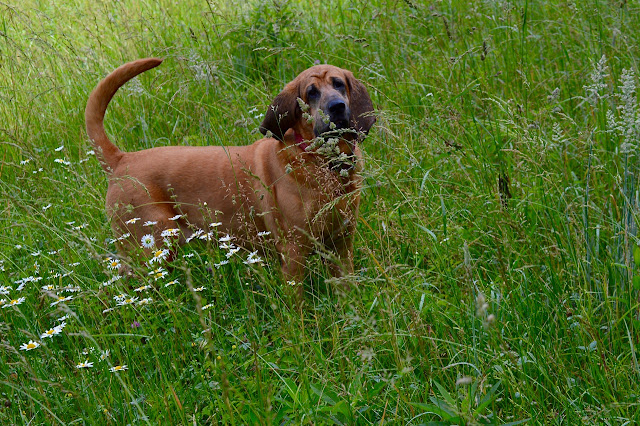 Stella is gradually heading over to her favorite corner. I let her roam today at her own pace. 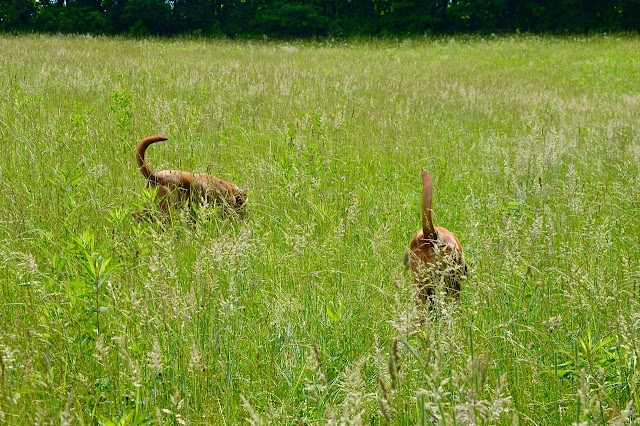 She is almost invisible in this shot. 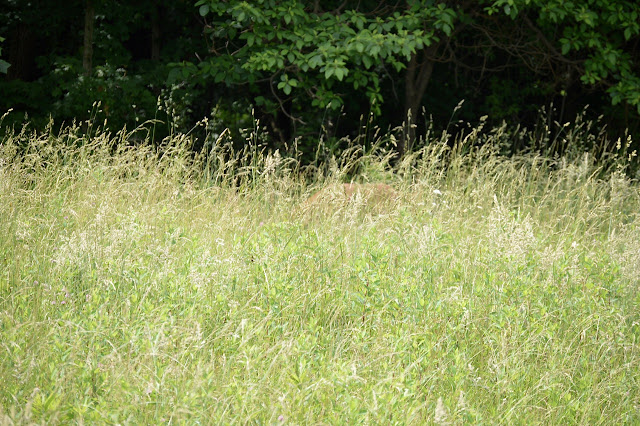 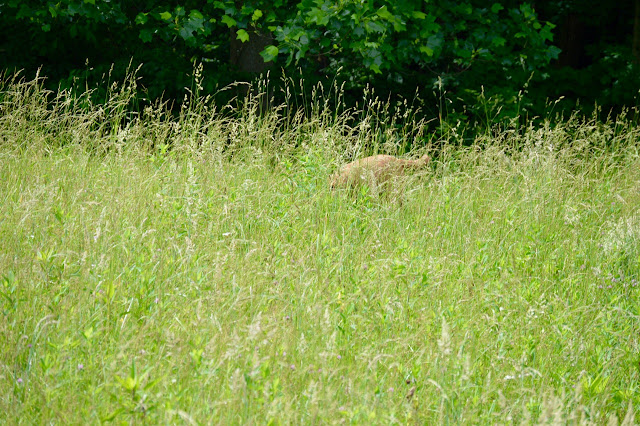 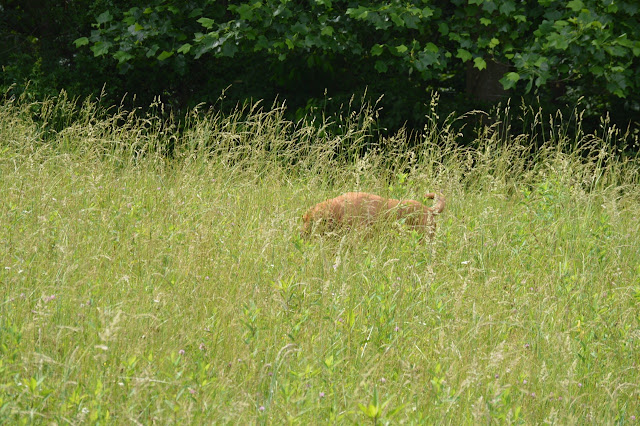 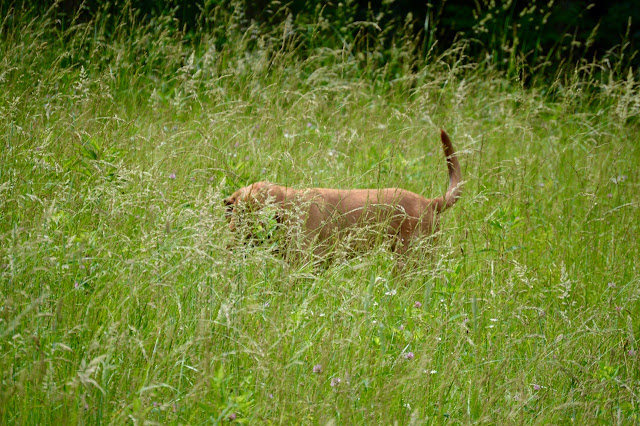 This is taken along the back edge of the field. You can see how in just a couple of days, the hay has really gotten taller in this area and maybe thicker. 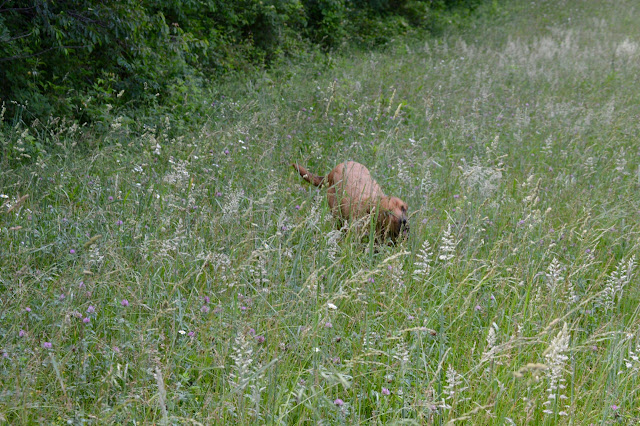 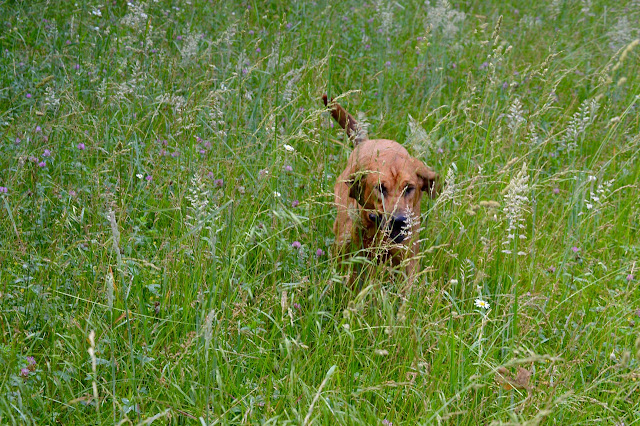 Stella has seemed to have forgotten about her 'no fly zone' area, she has little if any interest now. Her new point of interest is over toward the woods by the neighbor's house, where the deer were a couple of months ago. 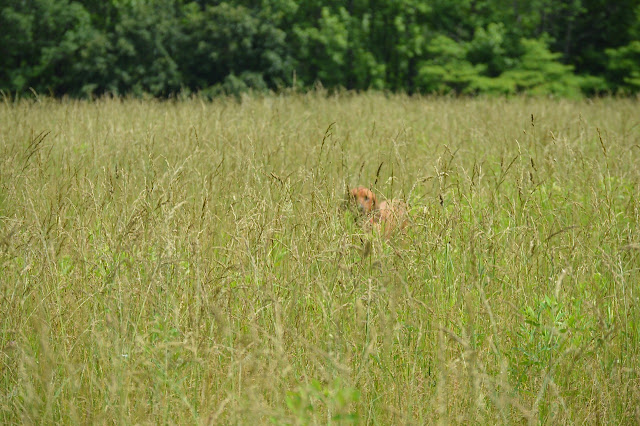 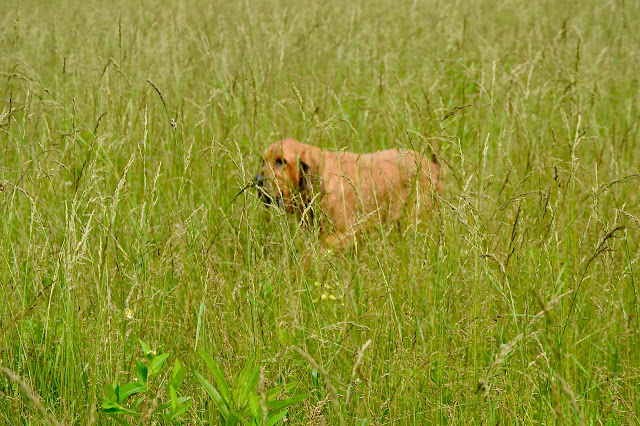 Once again Stella is hard to see in the tall grass. You can barely see her in the center of the photo. 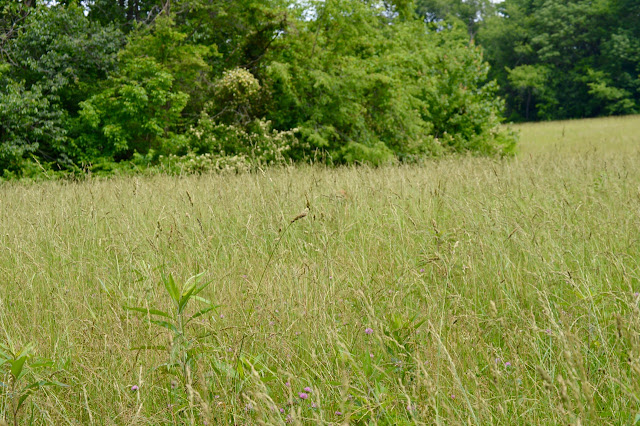 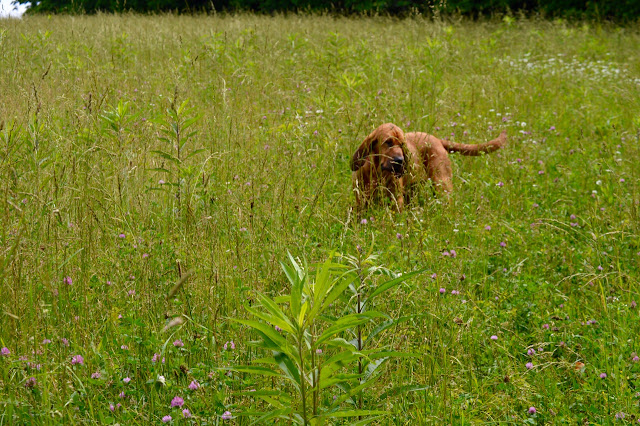 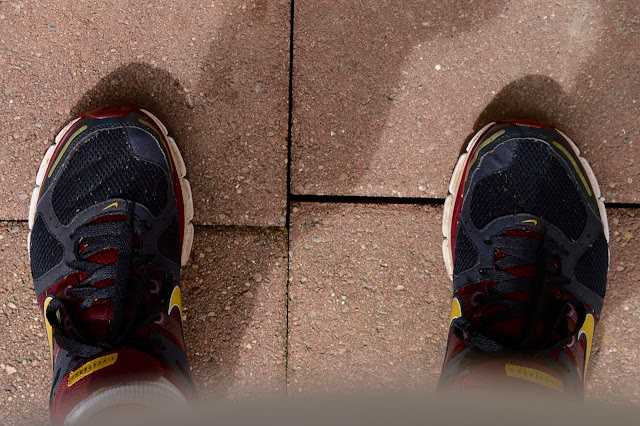 After leaving the car cover off of the Z4 a few days when it was sunny I decided to put it back on anytime that I am not driving it. It collects too much dust from the fields or highway in front of the house, plus a little of what I call "yellow pollen" power. Plus these spot storms that come out of nowhere are a pain if you want to keep your car clean.

Friends have not only suggested but one has offered to come over and enclose that side of the carport, making it a garage. I'd rather have the carport. It's open, I can see out from the inside of my house and I'm not sure I want that "closed" feeling blocking one of my better views from inside the house. So, I'll keep the carport and use the car cover.

The backyard grass was so tall after a week of not mowing, and then adding in the rain, that I raised my mower one notch. That worked out well because I had very little grass clippings left on the yard as I mowed. The interesting thing was, I started to remember that this was my normal blade level in the past ... still I wasn't sure.

The two banks of grass looked better cut at this height and that was what got me thinking that this level use to be my normal cutting level. A quick measure of grass showed me I'll stay with this new raised level.

You may remember me talking about the sharpness of my blog photos in previous blog posts. In January when I moved my blog back to blogger from Wordpress, I signed up in the box on the upper left "Follow By Email", to see if it was working for those that had signed up. There is a distinct difference in photo quality in that emailed blog post compared to the photos on the blog. The email version is much sharper. 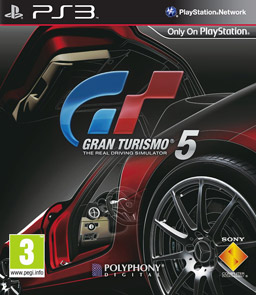 Gran Turismo 5 is a racing game, played on your tv via a Sony PlayStation. In my case this game is 6 years old and the PS3 is about the same age. It's been sitting off to the side for the past 4 years but from 2002 - 2010 it was pure addiction. Not only was I addicted but many co-workers were also and many a day started at work with GT discussions.

It's pretty detailed, hard to do for some, and a ton of fun. I'll not explain all the details but will tell you one funny story to give you an idea. You have to pass different levels of driving tests to be eligible to drive in certain races. As you improve in racing there are higher levels of competition.

In "my prime" of this game I was at the top level. I was racing this German road coarse for the first time, a ton of fun ... but the race was never ending. I thought something was wrong but I kept driving at a high rate of speed and noticed I had already a solid hour at the handheld controls ... where you can feel the road vibration in the controls. Since I had to get to a football game I stopped racing, saving where I was.

I later read that the race was a 4-hour endurance race in REAL TIME!!!

Since you can go from one race to another you would be shocked how fast time flies playing that game, one race after another. It's fun, addicting and enough untapped levels that I will not have to upgrade for many years if I do at all. I've never had the interest to play this game online.