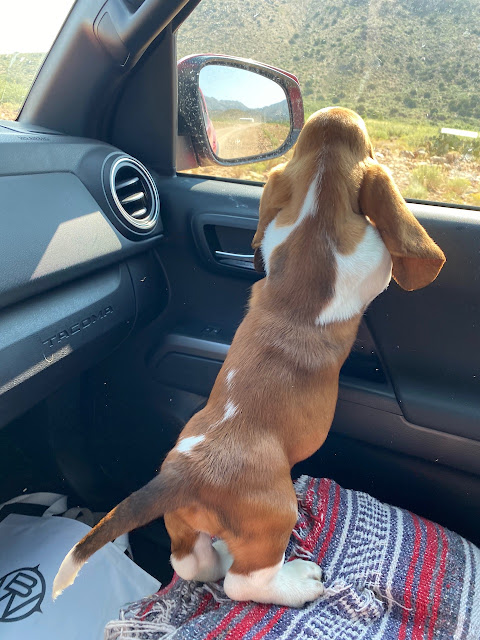 Did Blogger read my post last night? This morning the photos loaded in the correct order using the same process I always use but I also see this morning when I hit the 'return' key for the next paragraph ... it sends my cursor to the bottom of the page. Henry left his ranch around 10:30am yesterday standing at the truck window howling and barking. It was to be expected and I could understand the reasons why. I had warned Walter, Heidi and Stella they were getting a new puppy this week ... I wonder how much they believed me? 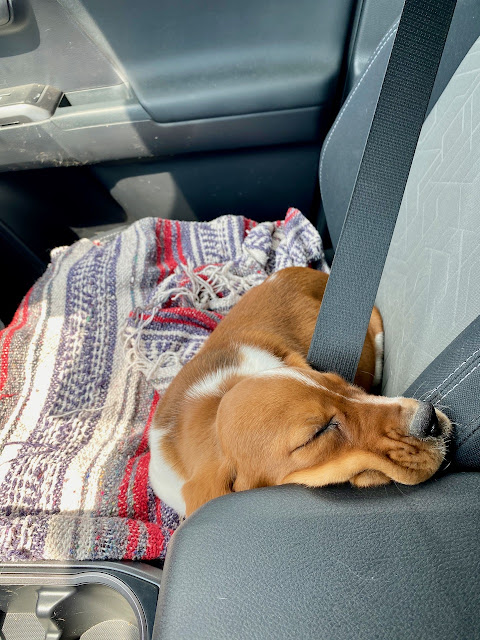 We had just barely turned onto I-10 after 6 miles of dirt road where he found the most comfortable place to sleep for the drive home. He would move to different positions on his blanket during the ride but slept most of the way. He reminded me a lot of Winston at this same age, when we did the 5 hour drive home in my 1963 VW Panel van back in 2004. 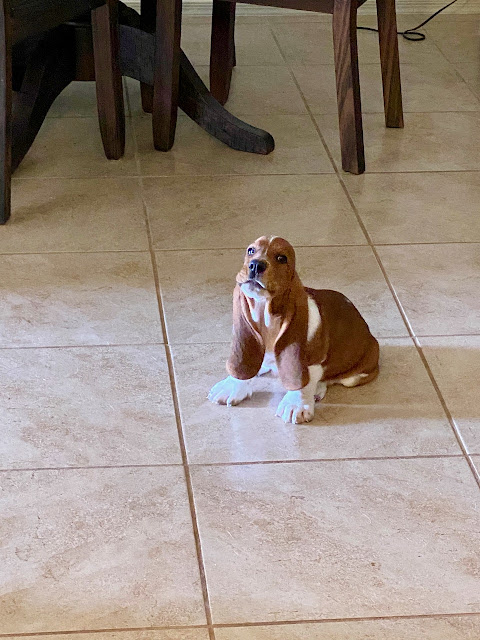 He walked from the truck through the open front door when we arrived. Heidi was the only hound to meet him since Stella and Walter were in their crates. Once Heidi saw him, she turned and trotted to the back bedroom where the other hounds were. She was not interested in the "meet and greet" for the new puppy. Henry slowly walked to the center of the room and let out a small basset hound puppy howl, then a bark. I guess he was letting the others know that I was telling the truth. 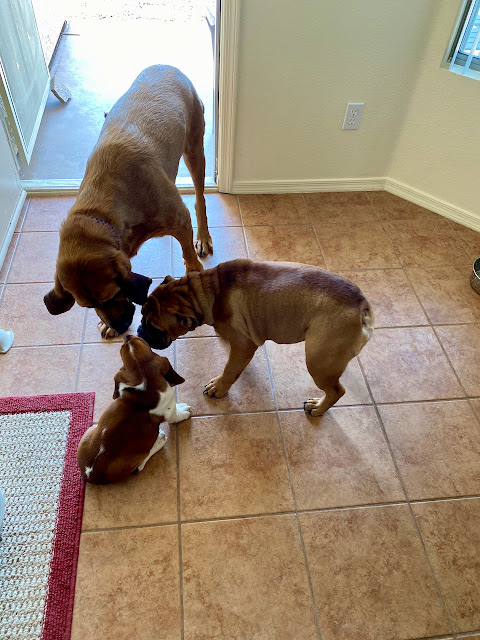 I didn't think it would be a problem with Walter or Stella. They both like other dogs. I was curious though what Walter's reaction would be. I think it was love at first sight because almost 24 hours later, he has not left Henry's side except the time they are sleeping. Stella was happy, wagged her tailed and did a playful hop back as if she wanted the pup to chase her. 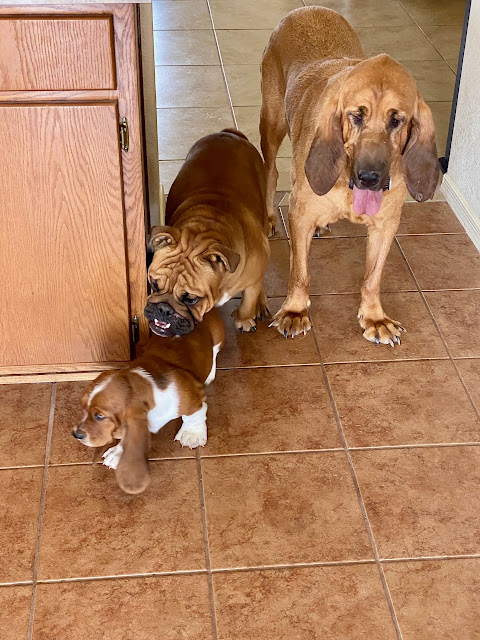 Of course Walter was going to show Henry the 'rank and file' of the house, that he was the new owner. He never got aggressive with Henry but made a point of standing over him just to let him know that he made the rules of the house. It wasn't long that Stella realized she could get back to her normal routine and there was a good chance the bottom of her ears could heal now after Walter had chewed them so much. 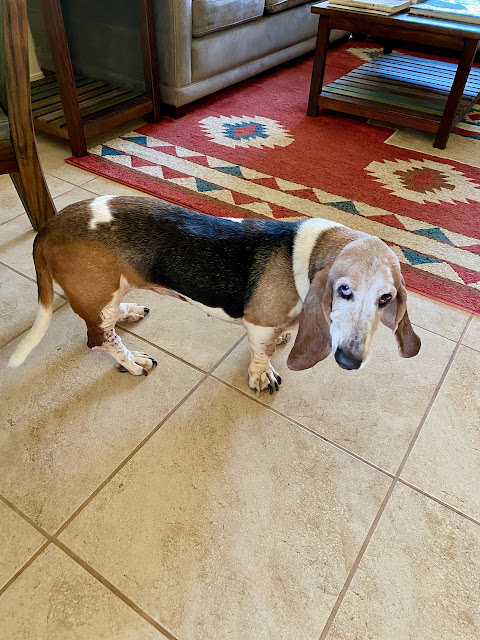 Heidi wasn't so sure though. Anytime the pup ran at her, she would trot away. She didn't have any interest in meeting the new fella. Once I saw that Walter was going to be okay with the new puppy I went to fix myself some lunch and let all the hounds, do what they wanted around the house. I did keep an eye out for Henry to catch him before he had any accidents inside the house. He was trained to use a doggie door at his kennel but I don't have one of those but the back door is usually open for them to go out when they need too. 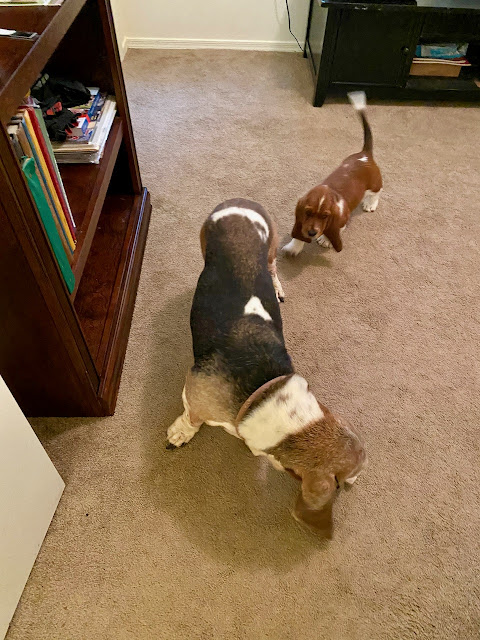 While I was sitting at the computer answering some texts and emails I heard that puppy bark again. As I turned I could see he had decided to chase Heidi and was attempting to either grab her tail or bite the back of her ankles, whichever he could reach. She grumbled and went to hide in the bedroom. 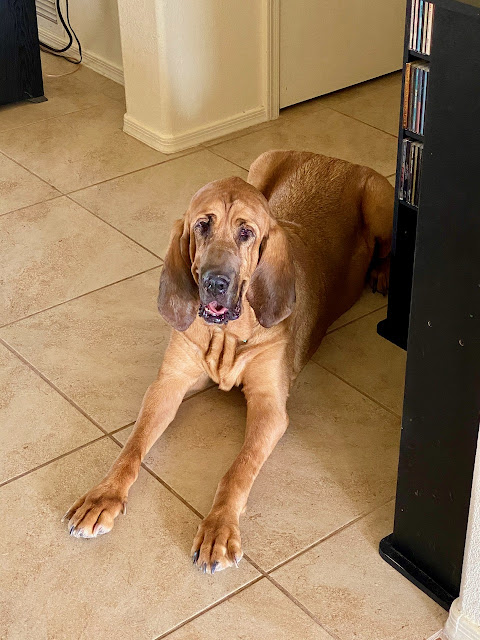 I could tell that Stella was enjoying her new found freedom. 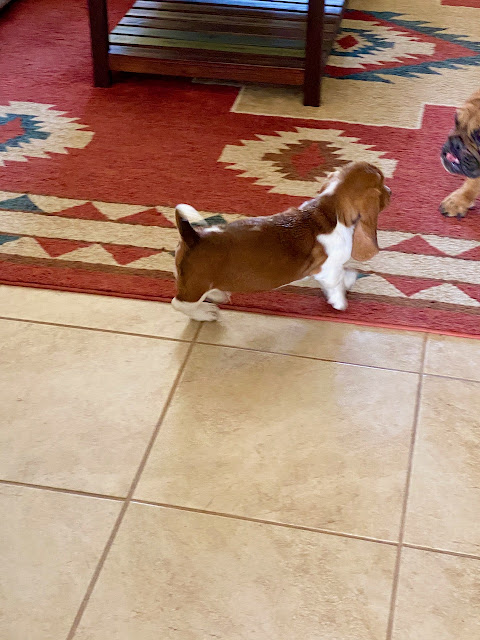 Henry had not even been here 3 hours when I heard him bark and then 'attack' Walter. Walter was so shocked with the offensive move and actually jumped a few inches vertically. That led into playing for over an hour. Walter was panting for air so much I thought he was going to have problems but he wouldn't rest. 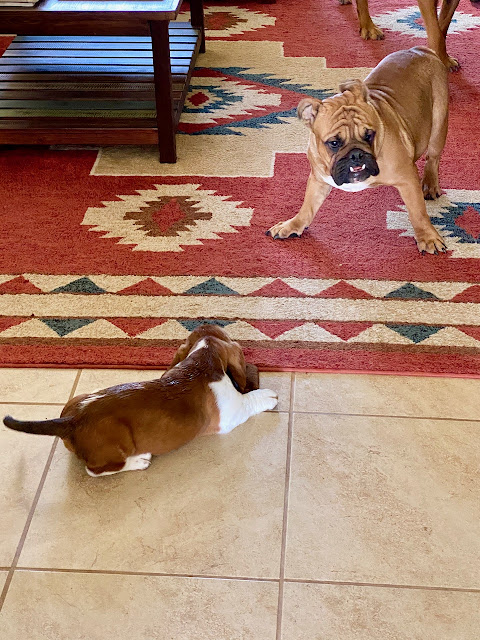 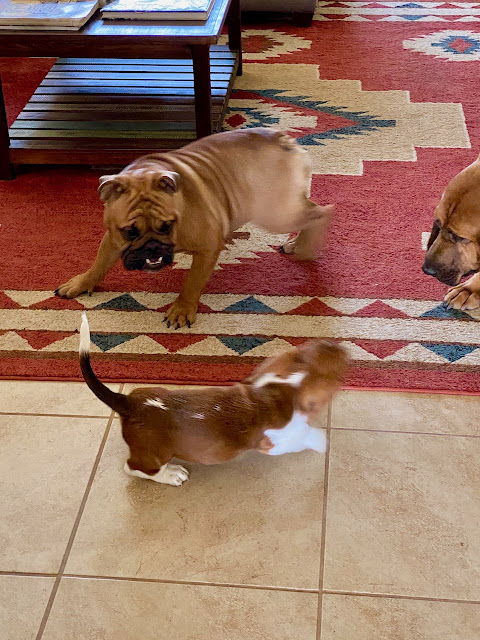 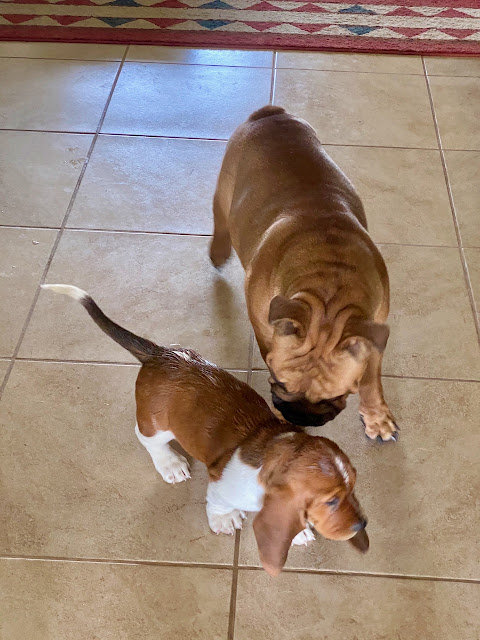 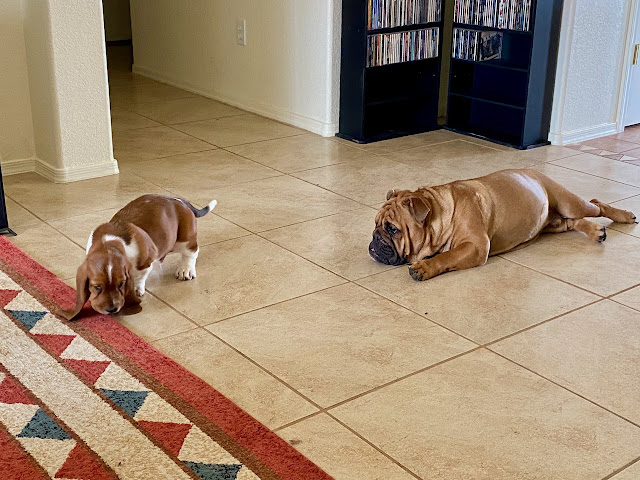 It wasn't long before they both started slowing down and needing to rest. Walter knew where the coolest place in the house was. Would Henry? 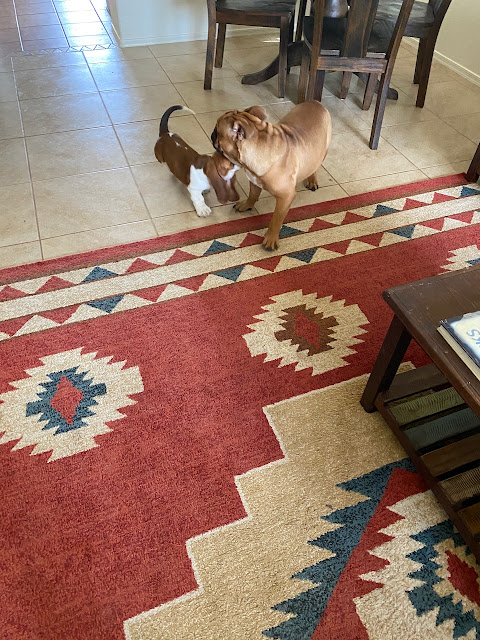 After a short nap they were back at it. You'll see Walter gasping for air. Bulldogs don't have the same size of cooling parts inside their sinuses as other dogs. It doesn't take much for them to start panting. 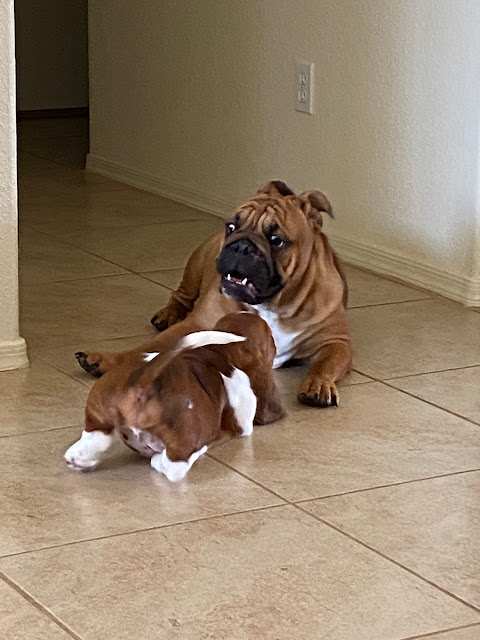 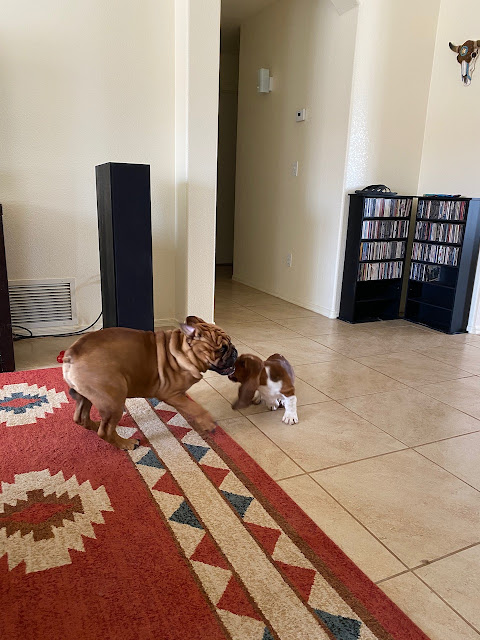 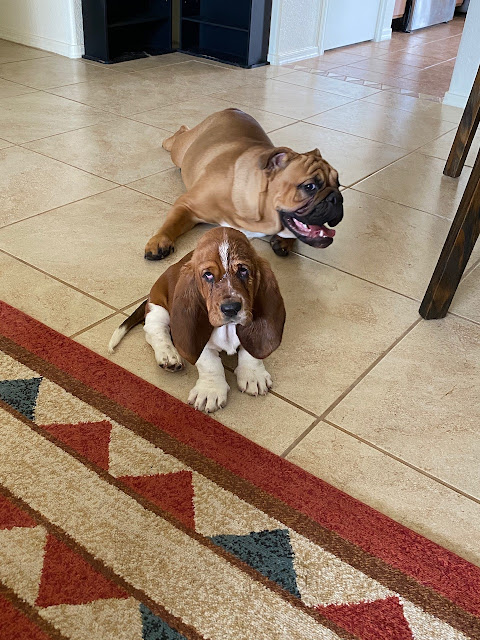 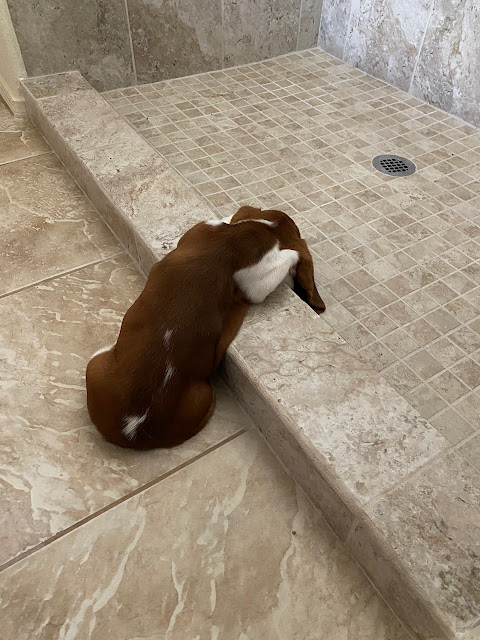 For the second day in a row, Henry has decided the coldest place in the house is the marble ledge to the walk-in shower. His blanket is out of view behind him but he has laid in that spot a few times for me to know that he likes it. 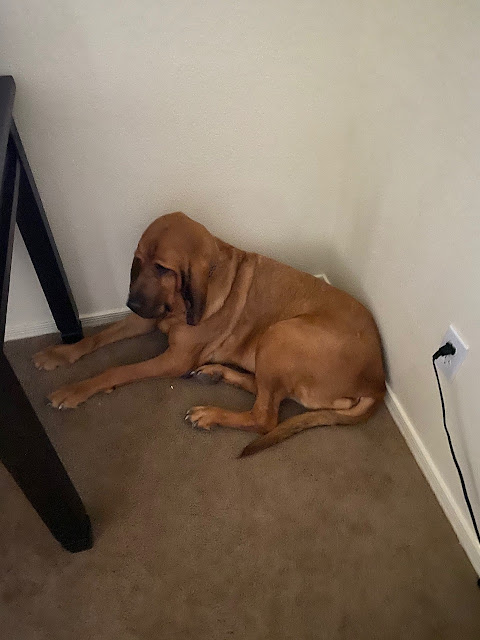 By Wednesday night all the hounds were sleeping. Stella was not approached by Walter one time to play after Henry arrived. She caught up on a lot of missed sleep yesterday and last night. 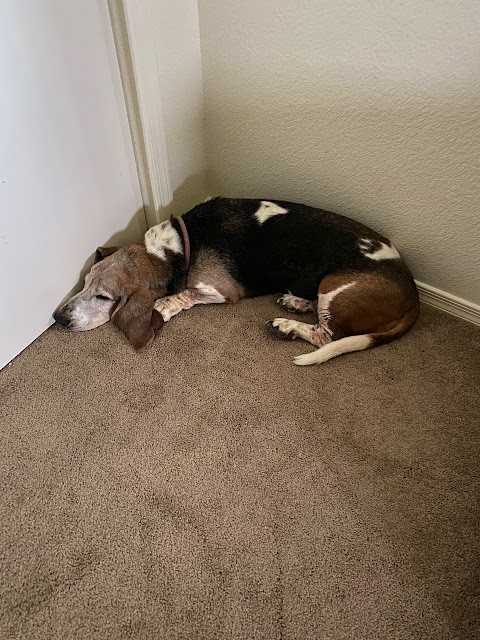 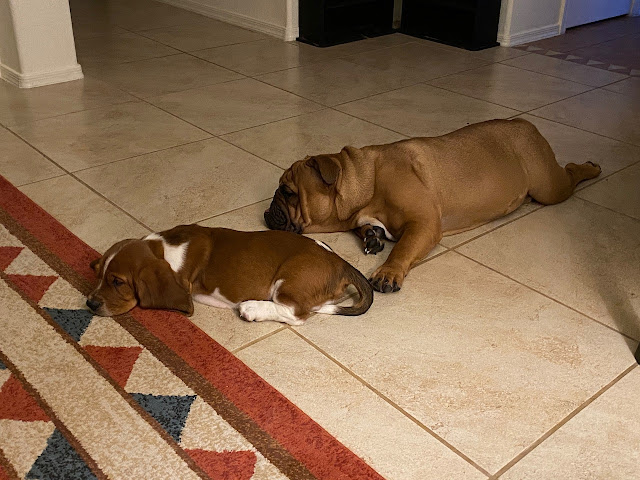 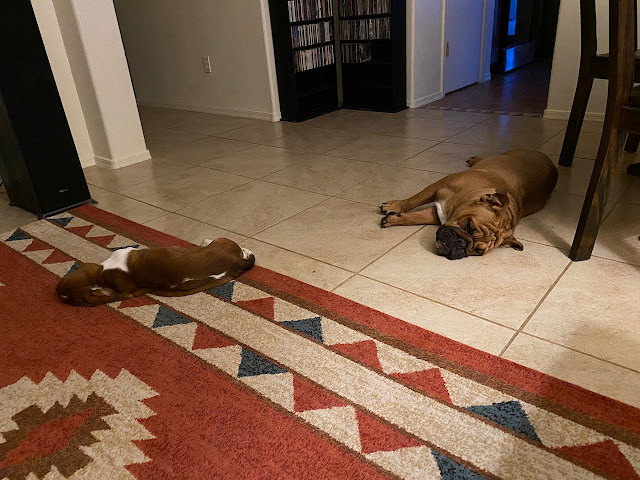 This morning Henry fell into the normal routine of the others. He trotted beside all the dogs was we walked down the hallway to start the day. The sun had barely come up over the horizon from the direction of Tombstone. He walked out into the backyard with Walter and did what all puppies do when they first wake up. His breakfast was served away from the other three in the kitchen.

As I finish this post around 10:15am, all four are sleeping. Henry is sleeping next to the bone he took over from Walter. Walter is snoring in the cool hallway while Heidi and Stella are in their corners of the computer room. It's pretty easy taking care of the 'army' of dogs.

It was a good day in the "Wild West".