The Hounds Handle The Day Of Drizzle 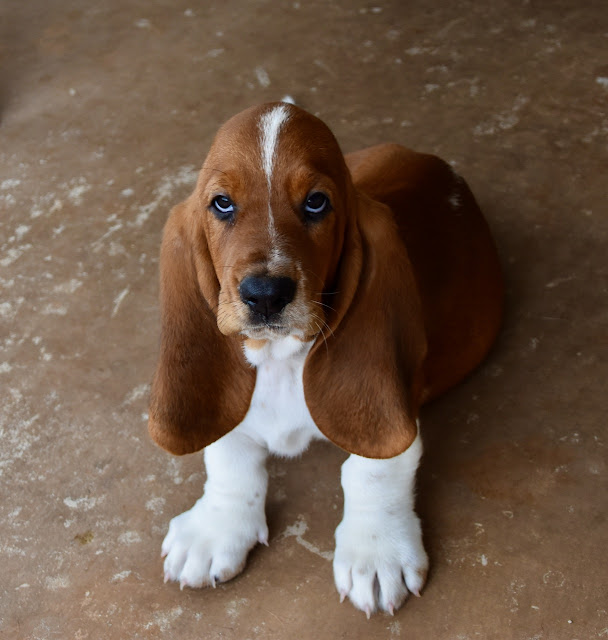 Henry is growing by the hour, fitting into a routine more and more even finding where his food bowl is among the other three. All four dogs eat at the same time, then Stella and Walter head outside while Heidi finishes her water soaked kibble and Henry finishes his 1 cup of food. That's what the breeder told me to feed him and it really is amazing to see him eat that much food twice per day. 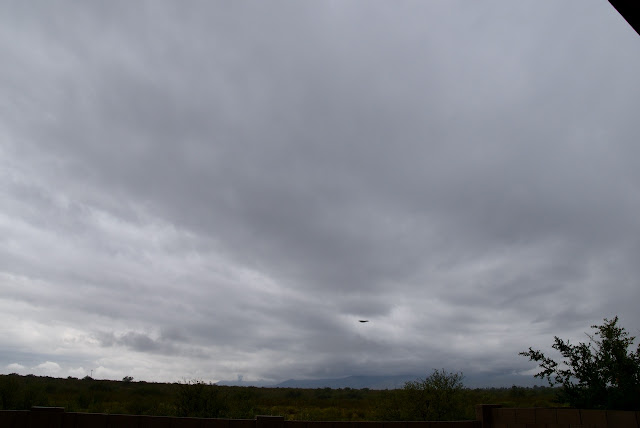 With the light rain throughout the morning I thought it was be interesting to see if that would keep Henry indoors with his bathroom duties. He didn't care and marched out to different areas of the yard doing what he had to do under a light rain. He did run back to the house when he was finished though. So he is a pretty smart hound. 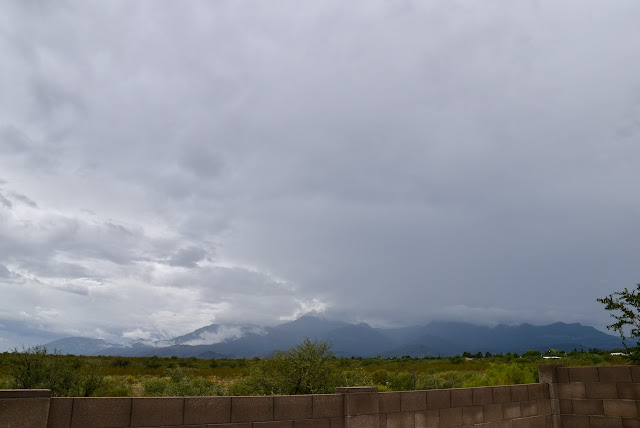 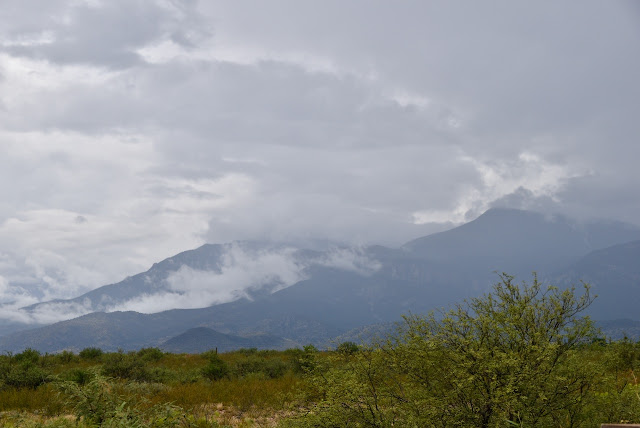 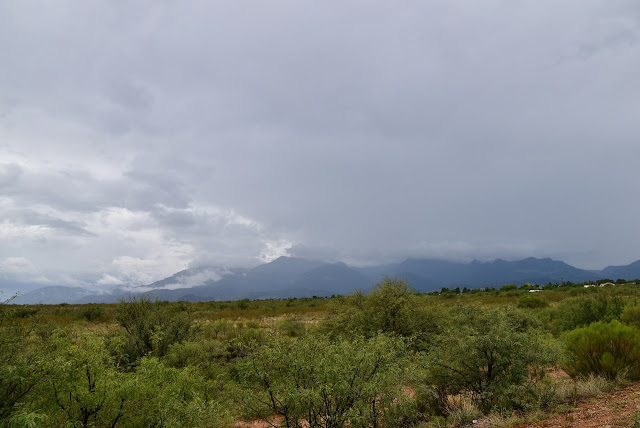 The skies tried to lighten up during the day but it's here for most of the time and hard rain was expected later in the afternoon. 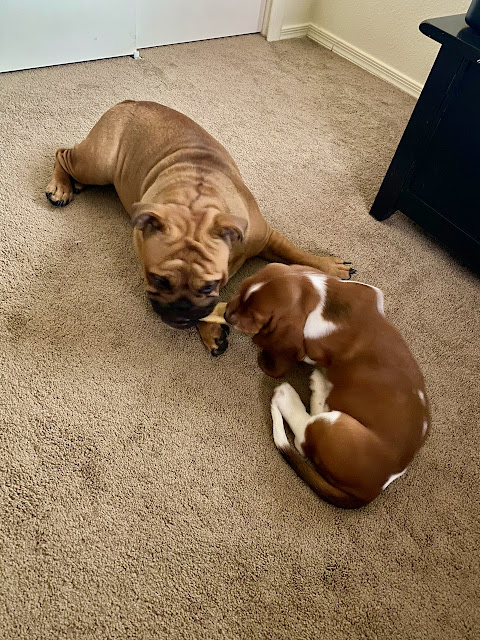 Every morning after their breakfast it's playtime for Walter and Henry while the other two sleep. All of them in the computer room while I drink coffee and read anything but political news. It's hard not to look but I've seen enough and already know who I am voting for in November. It's not that hard of a decision.

Each day I notice Henry gets a little braver. He wants Walter's bone more than before. He 'attacks' Heidi while she is laying there and wants to lick her jowls and eyes. He is the same way with Stella but she would rather sleep. I am thinking they are waiting for him to get a little bigger before they start to acknowledging his existence as a hound. 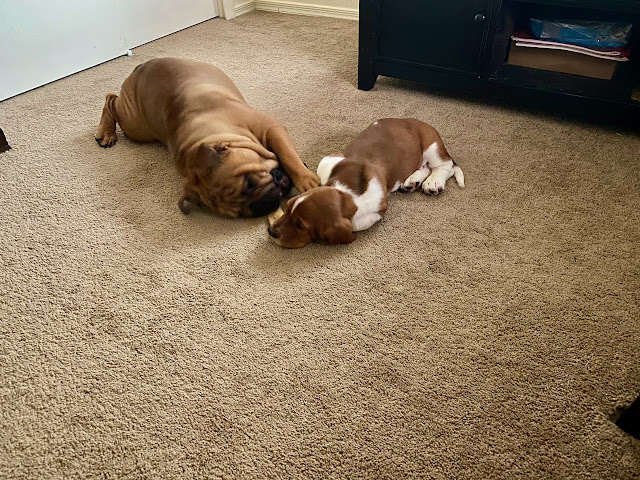 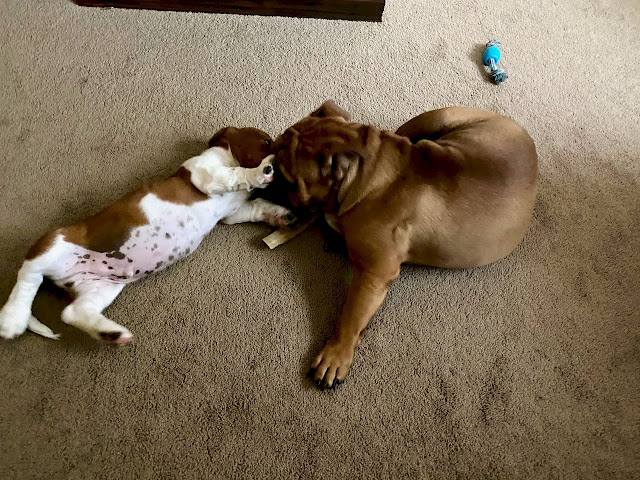 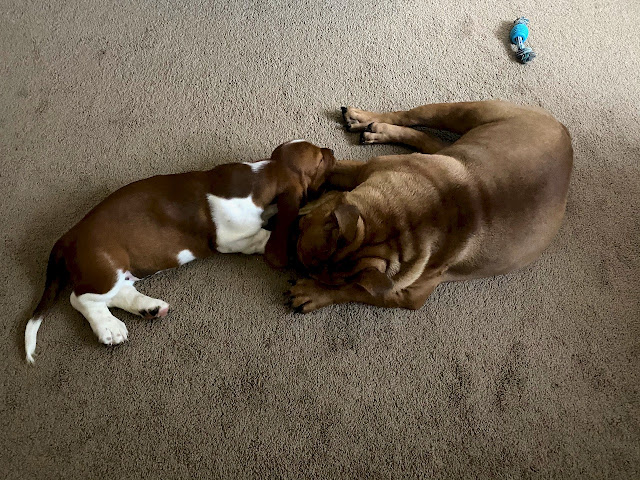 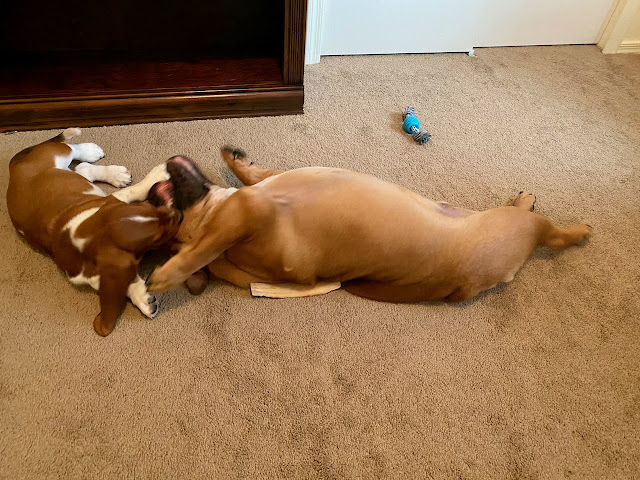 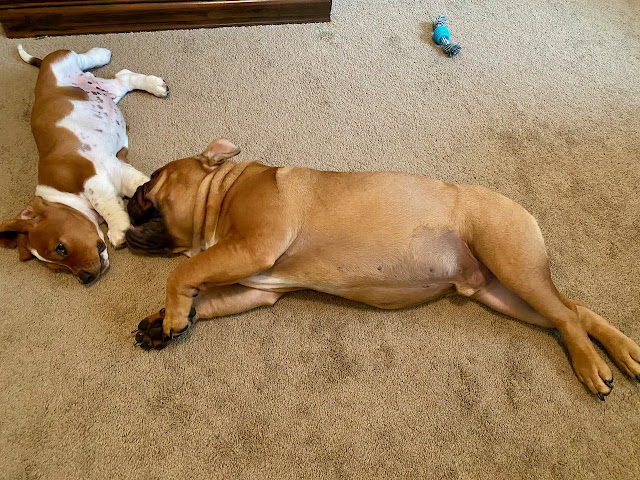 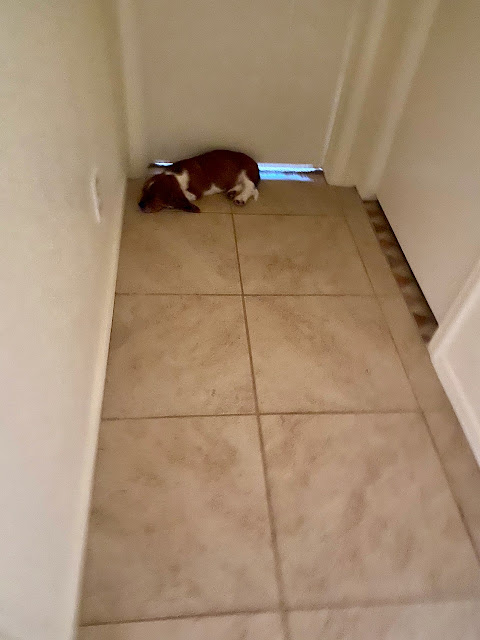 Usually by 6:15am they are both out for a short nap before going outside to check it out, get some exercise and see if the neighbor dogs are up yet. 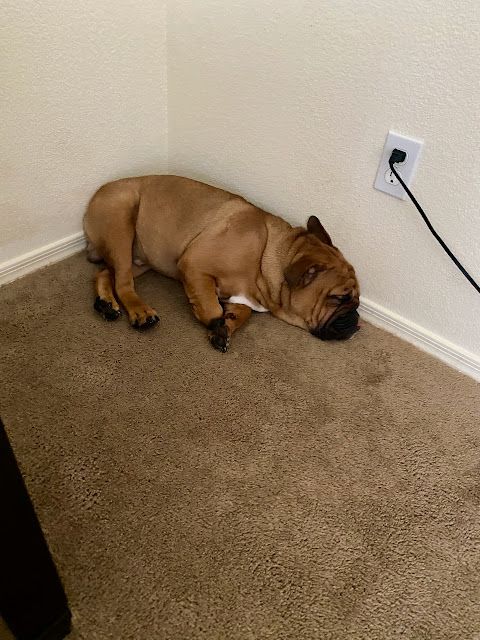 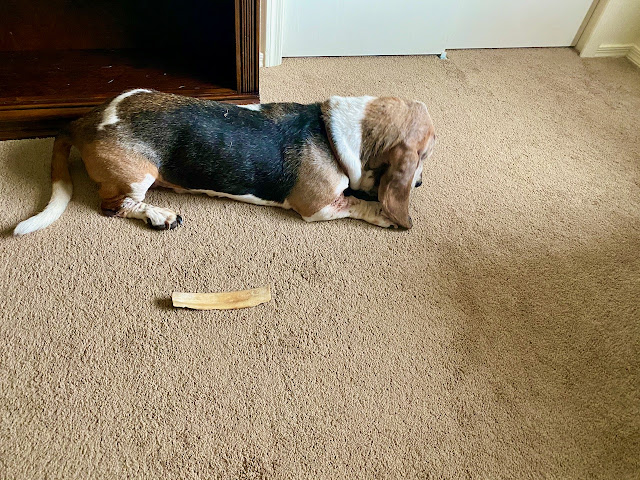 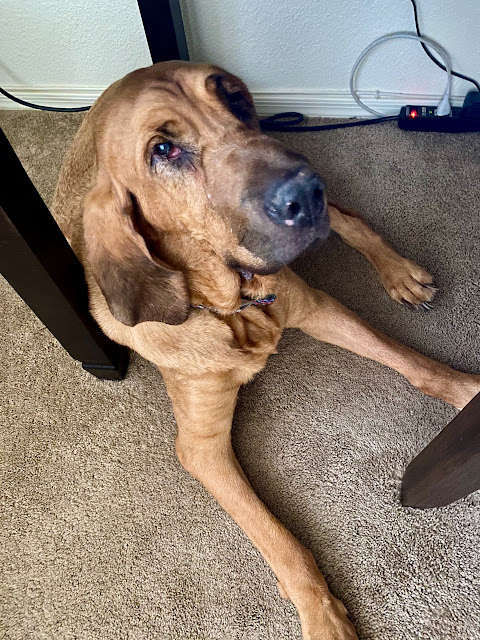 I think Stella is happy to get back to her routine before Walter arrived April 11th or 12th. 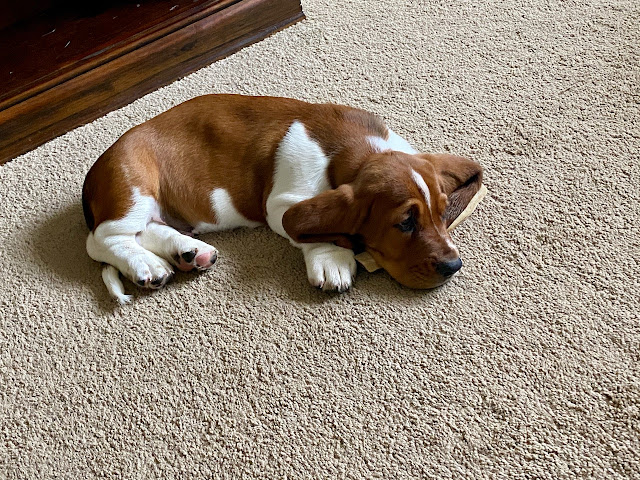 Henry figured out today that if he slept on Walter's bone that might hide it enough not to be bothered. 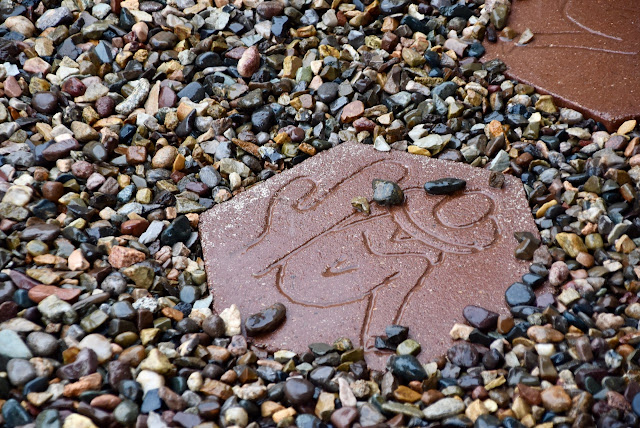 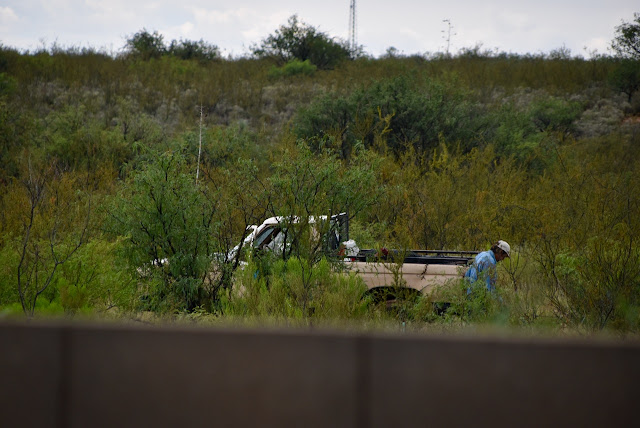 I don't see it often but mid-day I see a truck move out on the other side of the wash. I'm not sure what he is looking for. When I have looked out there through my zoom lens I have seen no signs of walking traffic but will see an occasional hiker but not many. 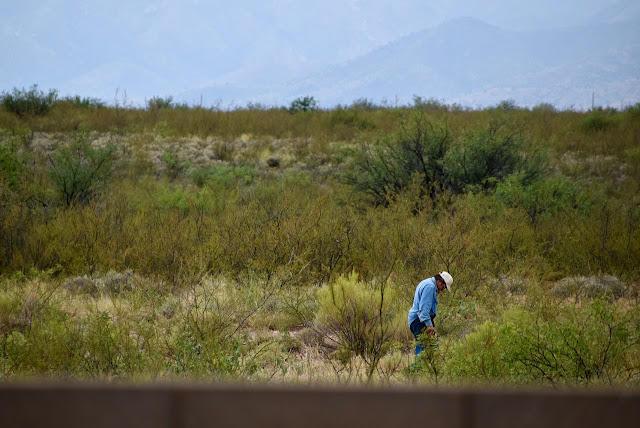 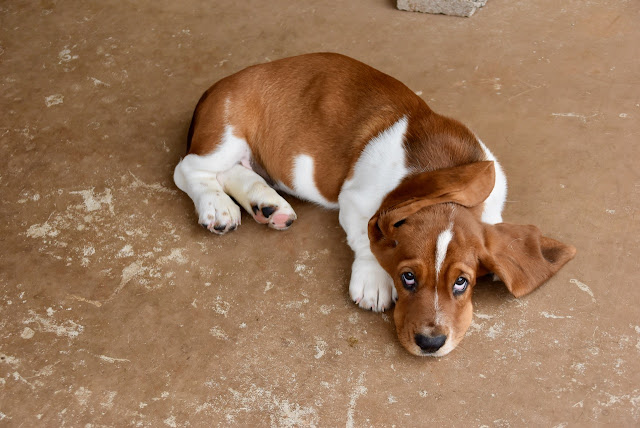 Henry turned so fast that his ear ended up like that. I think you can tell he really likes having his photo taken. Plus he likes to spend a lot of his time outside even if Walter is sleeping inside. 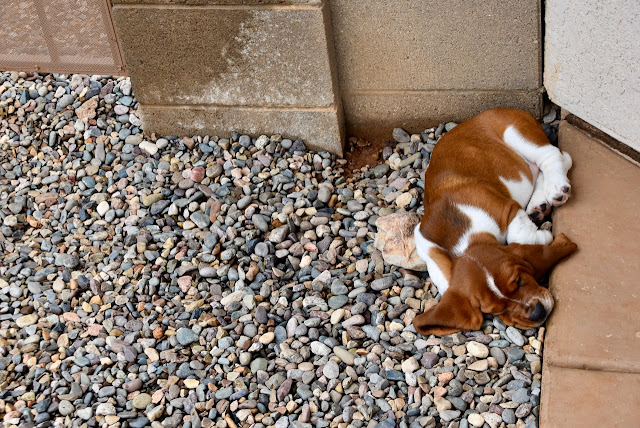 I saw three dogs sleeping in the computer room early afternoon after their second meal but no Henry. He wasn't anywhere in the house ... I guess he found this place better to sleep while it was drizzling with rain just a few inches away. 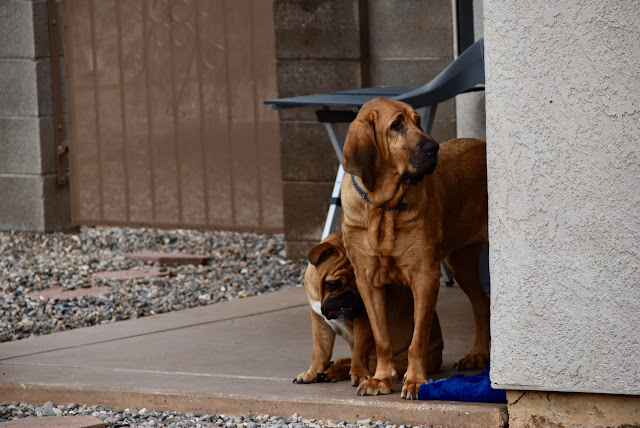 Looking for the doberman ... but no signs of from them today and that is strange. 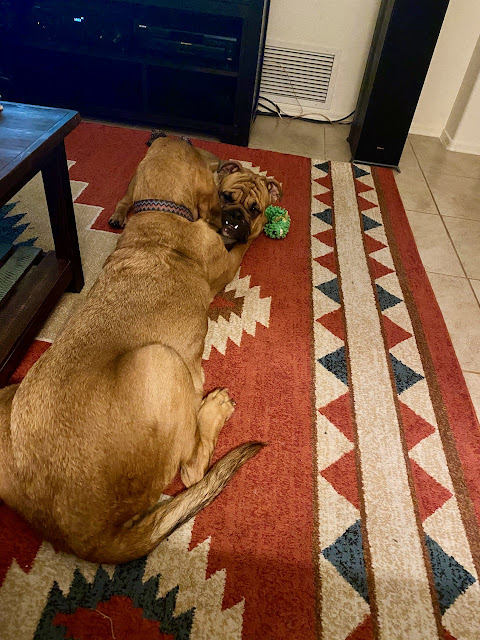 While Henry was sleeping, Walter and Stella got back together. That hasn't happened a lot since Henry arrived but Stella enjoyed getting groomed by Walter. With the temperatures barely reaching 70° and drizzle off and on all day, the hounds didn't do much. You can see they didn't miss any sleep for the rest of the afternoon. 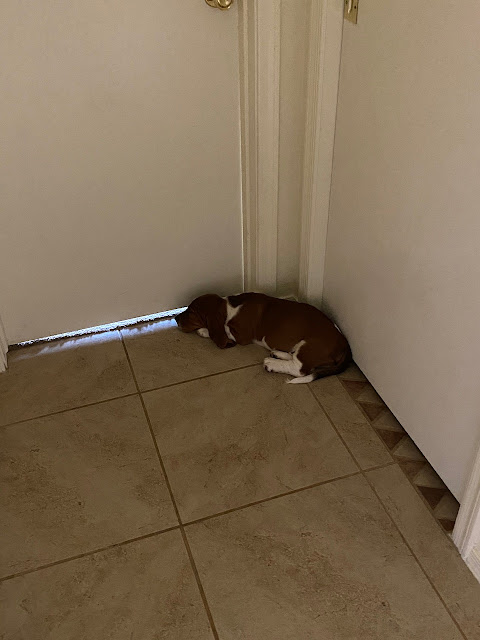 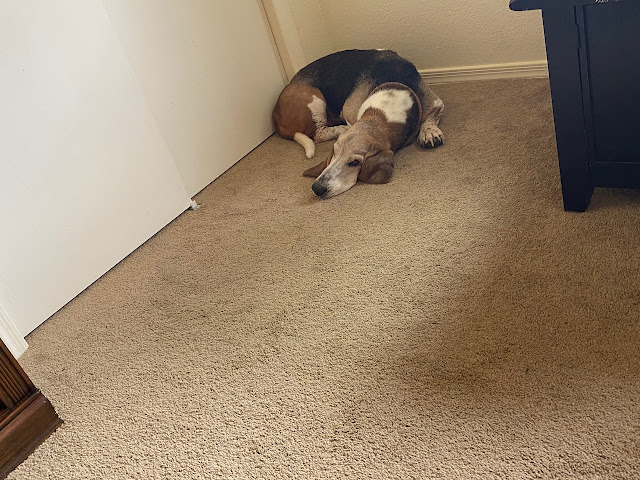 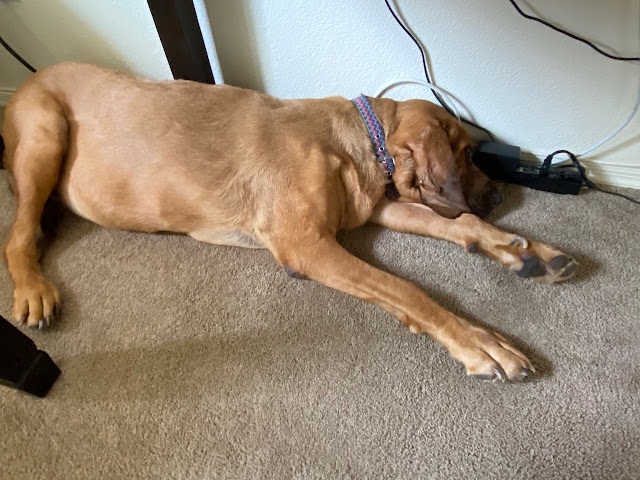 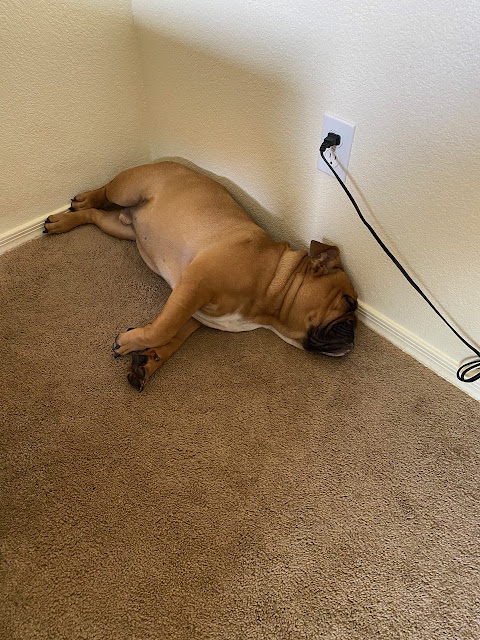 Blogger continues to play weird here in the "Wild West". Will they ever fix it?