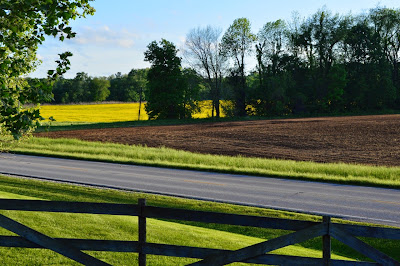 It was not as bad as the forecast for Sunday and Monday, but after a full day and night on Sunday of one storm after another it was nice to see Monday have nothing more than an early afternoon rain ... then sunny clear skies as far west as you could see on the map. 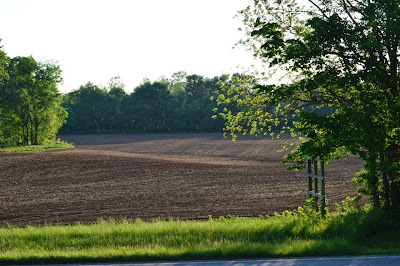 With it raining most of the day on Sunday I didn't find a lot of motivation and agreed with all three hounds the best thing to do was sleep. Nothing finer than the windows open with it raining outside. Luckily like a basset hound I had in the past (Harry), none of the three hounds are afraid of thunder or lightning. In fact it doesn't matter how loud or severe the storm is, it just doesn't bother them.

It had rained so much on Saturday and Sunday morning that my backyard was growing exponentially and I didn't see any way that I could wait until Tuesday or Wednesday to mow it. I'd leave the front yard for mid week since I mowed on Friday. So in between rains in the late afternoon on Sunday  there was a period of sunny skies and the grass was dry enough to mow it.

Don't ask me why but I decided to lower my mower a notch and cut it lower. I even pulled out the measuring tape to confirm the height of the grass after making one lap around the yard. Of course with me, any picture I see crooked has to be straightened, therefore I wouldn't be able to live with myself knowing the back yard was cut an inch shorter than the front yard ... so I mowed the whole yard at the shorter length. It looks even better when it is cut short.

That's just the way I am wired.

About 10 seconds after I had put all the tools back into the shed along with mower and had latched the door, the skies turned black and the thunderstorms were back on stage with strong SW winds.

Another reason for cutting the grass besides the back yard being tall, I have been trying to apply Scott's Weed and Feed. The hardest part about that is, you don't want to apply before a lot of rain because the seed will wash off the weed. Yet, you need to apply it to wet grass per the website and not have any rain for the next 24-48 hours.

So I was trying to fit that grass feed in at the right time. That time was tonight around 6pm. The grass was still wet from the rains today and the new forecast shows no rain until Thursday.

I know some are asking about the hounds and yard chemicals. I don't feed my yard annually, just on gut feelings. I don't plan on having any hound on the grass for the next 48 hours. How did I come up with that number? How will I do that?

First of all there is a slight problem with answers, so I went with the longest time possible. The sources of information are:

ALL THREE SOURCES SAYS SOMETHING DIFFERENT!!!!

So, I took a little of all the sites and the bag. I set my feeder at 3.5, I applied it to a wet ground with no rain predicted for 48 hours. I will not mow it for 48 hours. The most important thing is I will not let any of the hounds even near the grass for 48 hours.

As per pets, for example ... those 3 sources had the following suggestions for pets getting on the grass after the lawn food was applied:
Yet, the Scott's product page for my zip code listed a new or new to me, product ... Scott's Lawn Feed with Pets.  So that tells me the "real" stuff can do damage to pets if directions are not followed. Any chemical engineers out there can tell me different if they choose. They gave different directions ... so I chose the longest suggestion.
I will do that by putting Winston and Sadie on their 6' leashes and keep them in the gravel driveway when they want to go out. That should give us plenty of practice with the leashes as if we were traveling ... I guess. Heidi never goes out when they do and she only goes in two places ...the gravel driveway and the yard in front of the flowers .. where I did not apply any lawn feed.
Sadie will have some real "cabin fever" without our daily walk through the field (non rain days) and the hours she spends tied to her tether patrolling "her" field. Still 48 hours is 48 hours. Maybe it would be easier just to head out on a roadtrip for a couple of days.
Heidi has a vet appointment for tomorrow. Two reasons. One I want the vet to look at her legs before I buy the next 10ml bottle of RESPIT. We are day 97 of treatment and am not suppose to see any final improvement until day 140. There has been improvement but not as good as I would like. Those hocks on her rear legs are nothing short of ugly. She also looks like she has lost a lot of weight.
The second reason is she has decided after the 3+ years I've had her that she doesn't want me to cut her nails. Before she would lay there relaxed, knowing that after 10 snips, she'd get a treat. Yesterday during the 1st of 10 snips, she snapped at me ... then wagged her tail. I'll take her word for it and let someone else cut her nails.
As per the vet's recommendation back in February, Heidi has been eating Taste of the Wild blend of duck, duck meal and sweet potato. I can't say if it has helped with her allergies. I will say that the coats of all three hounds are the best condition they have ever been in as far as softness and very little shedding. Still based on his research into skin problems he feels that her allergies are not food related (3%) but environmental, thus the Immunity Therapy ... RESPIT.
RESPIT has shown a 75%-85% rate of success with no long term damage.
So not much else going on ... even though it's May and hot at times, I've had an urge for beans and cornbread. So the beans soaked for 24 hours then slow cooked starting this morning. It was my last bag of beans so not only did I want to see if beans caused Acid Reflux, I wanted to use the bag instead of throwing them away.
I have had a couple of slips off the diet. No junk food unless you call those waffles junk food. No ice cream (terrible withdrawals), no bread, no sandwiches ... 10 days of no indigestion / acid reflux and NO TUMS.
For an ending to a boring post, I thought I'd include a short story of my very first basset hound with an AKC Name of "Harry Gonso of Indiana". He answered to either Harry or Gonso. He was named after a Quarterback at Indiana that led the Hoosiers to their first and only Rose Bowl against OJ Simpson and Southern Cal in January 1968.
Winston's laidback personality is a lot like Harry's. One big difference, Winston stays home when he is outside and Harry would be gone the second you took your eyes off of him. Harry was a "roamer" that added a lot of funny stories to his life. Luckily Harry died of natural causes instead of running out in front of a car.
After moving to Indiana, I had a neighbor in Bloomington that was a photographer for a local advertising agency. He had a greyhound that use to love to play with Harry, tormented the hell out of him with his speed and quickness .. but Harry never stopped chasing him. Anyway I was asked by this neighbor if "he could borrow Harry for a couple of hours one day this week?"
I'd heard nothing like that request before so to say the least my curiosity was raised. Come to find out they wanted to borrow Harry for a photo shoot they were doing. Harry was paid with a check at the end of 3 hours, which included a lot of breaks for him and the photographers, different sets, the huge umbrellas for the perfect lighting and was done at a house in one of the richest sections of Bloomington.
Harry was a hit with everyone as he was everywhere he went. He loved getting his picture taken and also loved to attend parties. The girls that lived at the house wanted to keep him, the agency wanted to use him again and I was hoping Harry would share his commission with me.
So here is the final product of that photo shoot. That is not me in the photo but Harry is the basset hound in the photo. 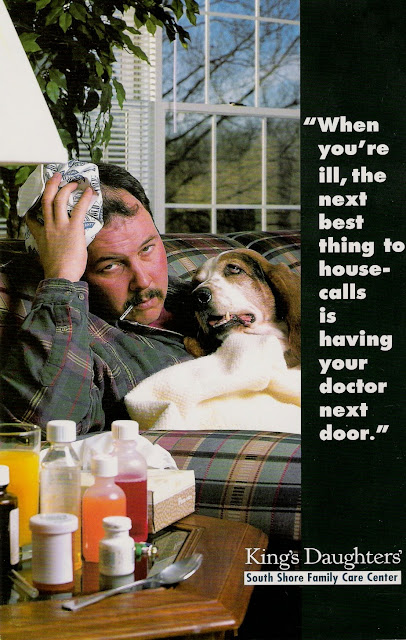