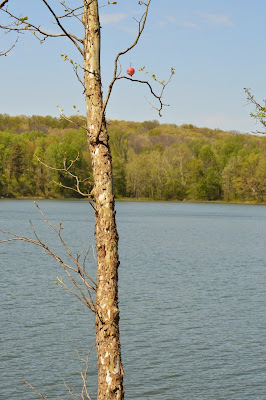 The thing about retirement and a brain that can change to unplanned activity within minutes makes a normal Monday interesting. As usual I had no plans for today, I rarely have plans, so that leaves a lot of open space on the calendar to get things done or go places ... or a chance for my brain to lead me down a path of destruction.

Expecting 80° and sunny, I woke up to overcast gray clouds and 70°, that was my first signal that possibly things were not going to go as I thought they would go today. If you remember a few posts ago I posted a picture in the backyard where I had cleared out an area of overgrown brush, small 1" trees, weeds etc. I finally was going to turn this into a part of my yard where I could build a fire pit plus have some nice shade to sit under during the summer.

Well that is going as planned. Like all bags of grass seed that I buy anyway, there always seems to be more in the bag besides just grass seed. I will wait a few more weeks before I take pictures and try to decide what it is ... maybe some readers can help with the identification ... although I do have new grass sprouting up on schedule. I have various attachments I can connect to my hose to water the yard. Unlike the western states I have an abundance of water so watering the yard is permissible if I chose to do so.

That is too easy though and not nearly as much fun you can have with a hose in your hand and watering that area yourself. You can adjust the spray nozzle, you can rotate the water spray anyway you want, flip the water back and forth or up and down but the real reason I like doing that task ... it's relaxing ... plus I have always enjoyed watching the ground crew at a Major League Baseball game water the infield before the game is played.

To me, watering the infield before the game is almost as enjoyable as watching batting practice. In some games I've attended, watering the infield pre-game was better than the game. I know some will accuse me of being 'weird', but I have been accused and called worse. So that is what really has me watering that back area myself instead of using water sprinklers. I not only like doing it, I love watching it.

Before I did the watering this morning, I cut the last of the small trees that were 1"-2" in diameter down to ground level so I can eventually mow that area without tearing up my mower. At times I was on my hands and knees, getting jeans dirty but I was dressed just for that. Those dirty jeans are a factor in this story.

Where and why does that lead into today's post???  Stick with me and you can see how I may have a little ADD but not confirmed ... sure I can be doing yard work but that doesn't stop me from something else if I am distracted.

As Winston, Sadie and I were headed back inside the house, as I walked by the FJ I had a sudden urge to crawl under the FJ to look around. With those dirty jeans I was already dressed for crawling under my FJ to take a look around for any skid plate damage, any kind of leaks, plus I also wanted to locate the oil drain plug because lately I had been thinking about changing my oil. See where this is going???  LOL

When i realized that I had to remove two skid plates to get to the oil drain plug ... I wasn't in the mood for that today. I've done it in the past but not today. Maybe it was the overcast clouds instead of sun, who knows but all I knew, I would not be the person changing the oil today.

Since I had nothing else planned or at least I had not made it back to my iPhone to see what was next on my 'to do' list, I called the local Toyota dealer 25 miles away and they said oil changes were first come first serve. Nothing was happening in that line and if I could make it over within the hour they should be able to get me in and out fairly quickly. That sounded good to me. A quick shower and change of cloths had me on the road within minutes.

Off I went, stayed at 60mph, made it through some light traffic in town and was at the Toyota Dealership within 45 minutes. I pull the FJ into the garage as the sign said, stopped next to the service desk and I saw a garage that was about 1/3 filled with Toyotas on lifts being worked on. It looked like plenty of space for them to take my FJ and finish the job in under 30 minutes. I mean the FJ was already inside and they were stepping into my vehicle .. what could go wrong?

Not so fast, nothing ever goes that smooth with me and vehicles. Instead of giving them the FJ and sitting in the waiting room for 30 minutes, the lady said it would be 2 hours before I got my FJ back .. but but but ... that's not what he said on the phone ?? I called before I left. If I had heard the two hour window on the phone at home, I wouldn't have gone because patience is not my strong point .. plus I can change the oil in less than two hours myself.

Here I am in a two hour window twenty-five miles away from where I had thought I'd spend most of my day today .. at home or taking another local expedition to blog about and take pictures. I bit the bullet or my tongue, gave them the FJ, nodded at their two hour estimate and hopped into their shuttle van for a trip to the local shopping mall.

An hour plus ago I was on my hands and knees in dirt, sawing small trees to ground level and now I am headed to the mall ... just like that ... totally unplanned and unexpected.

I knew that a trip to the mall with the large 'food court' would probably be a true test for day 4 of my diet ... it was and I was surprised I passed. It was something else though that caught my eye in the mall that I had not seen before, it was something that makes one forget about food, tv, mall walking, or anything else ... a new Apple Store. It had opened just last Friday. I could hear it calling me ......

See how my mind works at times? Totally unfocused equals totally dangerous. From dirt to new Apple computers within 1-1/2 hours.

I hated the thought of going inside the store to even look. My iMac is great and has treated me well for almost 5 years ... except that time I activated File Vault. I posted about that disaster last fall under the 'Geek Squad', read if you are seeking some humor today.

Anyway I had to look, I had to feel and test out the new MacBook they just released. Of course they had that displayed right up front as  you stepped inside. In gold, extremely thin, great picture on the monitor ... it was just like the pictures Apple has been sending me lately in email.

I also wanted to look at a MacAir with the retina display to see if the 13" monitor is manageable after living on my 27" monitor at home. I need more than a 16Gb iPad Mini to upload photos from my camera when I travel. Plus I am finding out I do more than just internet and mail, so a laptop computer is probably the better choice.

Needless to say, I survived both of those machines without opening my billfold.

Then ... as I was walking past the iMac's to look at cases for my iPad Mini ... there it was ... the 27" iMac 5G with the retina display. woah woah woah .... what a clear precise picture displayed on that 27" retina monitor. It made me stop to look. No ... I am NOT in the market for a new iMac but this one is simply amazing in person, so I had to, I had no choice ... afterall I heard the store calling my name as I walked down the mall corridor.

With the retina display on one side of me and the regular 27" monitor on my other side it was very easy to compare the same photos, to see if my old naked eyes could tell the difference. They could and they could very easy ... I didn't even have to squint to see if there was a difference ... I could see the differences standing a foot away. I had a feeling I was slipping off the cliff on this one ... I confirmed by feeling for my billfold and it was still there, so I had the ability to close the sale.

Remember when I said I hated the thought of walking inside the store?

Well I can feel my brain cells scrambling, heavy electrical activity going on between my ears ... I hate when that happens.

After giving that iMac a strenuous personal test, I loved it ... but I walked away a few steps ... then turned back around. The sales agent seriously thought by the look on his face that he had NABBED ME ... it wasn't the MacAir or the new MacBook this customer wanted ... I had sold the iMac to myself. He could feel the 'tug of the line' I'm sure ... but like some fishing stories I've heard ... this fish gets away.

I told him I had some thinking to do, and headed to the door ... billfold still in my jeans back pocket.

I had survived the new Apple Store !!!!

The driver of the Toyota Shuttle van was also retired and after I told him I had made it through my first year of retirement unscathed, he asked me what I did ... I replied "not a damn thing and I love it" .. no schedules, no priorities, no business trips, no boring powerpoint meetings ... it's great.

Then he asked if I fished. When I heard that question all I could think about was the picture of that bobber I took yesterday that was hanging in a tree about 10' off the ground. It's also the picture at the start of this blog post. In fact there were two bobbers hanging from two different spots on that same location on the bank of the lake. I wondered if it was the same fisherman that put them there.

When I saw those bobbers in the tree yesterday I mumbled to myself out loud ... "that's why I don't fish".  lol

The very few times I have been taken fishing by relatives or friends, less than 5 times in my life ... i've never caught anything ... not even a nibble. Someway my fishing line always got tangled, at times I've had those same red and white bobbers do weird things behind me as I rare back in my baseball pitching form to cast the line out into the water. Although they were probably worth taking a video or at least a picture to laugh about ... luckily phones with cameras or even small cameras were not available way back when.