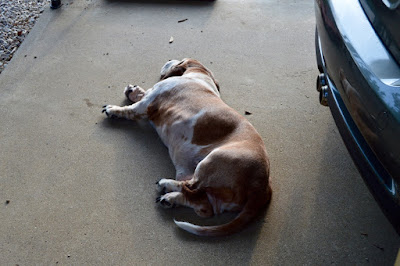 With the winds between 15-20mph from the west, Winston decided the best sleeping spot of the day was outside behind the Mini Cooper. That is one of his favorite spots and one he uses when he is waiting for me to let him inside. He also likes to sit in the sun on that corner and watch the highway traffic.

He looks about the way the weekend felt. Not a lot going on. I've watched some NFL preseason football but never a full game yet. My Reds have finally dropped to last place in the Central Division as expected with a starting pitching rotation of all rookies now. Plus with trades or injuries they are playing 4-5 position players off the bench. 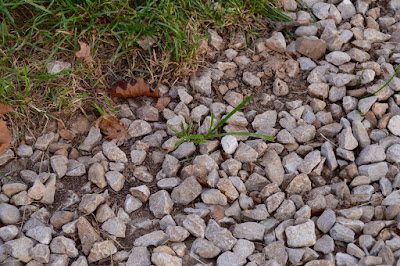 Today though I added the IRL Pocono500 to my viewing pleasure. So as you see it's been pretty anti-climatic once all those weeds were pulled last week. I have had a few sprouts start to come back. So far I can pull any new weed starts as I walk to and from the mailbox down the driveway. The ones like the one pictured have been pulled at the flat top of the drive while the dogs are outside and I am outside to get some fresh air and some sunshine. Whether I can keep up with those new wanna be weeds is yet to be seen. 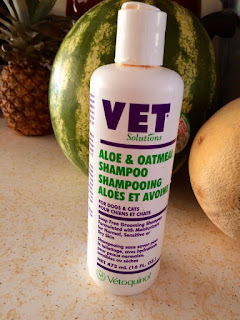 For Heidi's bath yesterday I decided to pull an old shampoo off the shelf, bought from the vet last fall. It not only has Aloe Vera in it, but oatmeal. So why shampoo her with "grain" if I am not going to feed her grains in her dog food? That's a good question. I've read in some places that Oatmeal in dog food or in this case shampoo may help in spreading a yeast infection ... if that is what she has.

I just wanted a shampoo that was less intense compared to the medicated shampoo that seems to increase her skin rash after it's applied. Surprisingly today, after the bath on Saturday, her skin really looks good. There is softness to it instead of hard crusty and/or red and raw. There is little to no redness anywhere on her skin today. She chewed and itched her skin today a lot less than she normally does. I am going to wait a few days to see  if there continues to be improvement before I post any photos ... but I am encouraged by what I saw today.

Something I should have done a long time ago since I have a spreadsheet for everything else, I made one up for her. I listed the date, skin condition on a scale of 1-5 with 1 being the best and dog food name with ingredients. I've gone back through photos and vet bills to fill in past activity onto the sheet.

I also found out this all started in July 2014, not October as I thought. I found an old Word Doc that I had started as her health journal in July 2014 when I started using the food supplement named Dinovite. This sheet will give me and the vet some sort of reference for future trips to the vet. I had taken notes before or made a point of remembering thing in my head but this spreadsheet will be much better to see when needed. 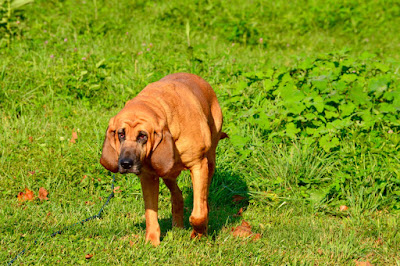 While I was sitting outside with Sadie, I noticed along the wall of tall trees there was a patch of leaves very high that had already turned yellow. They stood out among all the green colors. You might be able to tell from looking at the leaves that the wind is a strong wind.

The yellow leaves I speak about are towards the upper right corner, halfway between Sadie and the right edge of the photo.

As usual in late August things get pretty comfortable here in "the tropics" of Southern Indiana. The temperatures start falling, the humidity decreases to levels that are livable and the thought of travel starts disappearing ... until ... you read a blog or blogs where people have broke camp and are heading for a different location or some people are making plans to head to their winter locations. It's readings like that make the fire still glow in the pit of my stomach.

The inner urge to wander takes over. The spreadsheet of options is opened again to look at the pros and cons. The thought process moves in between living comfortable or make and adapt to changes. Yet it's also hard to think of moving 3 hounds when you see them sleeping in their favorite spots on a floor, couch or bed that doesn't include dirt or sand.

Yet the urge to shut everything down and hit the road increases the excitement level ... more than staying comfortable watching football (my addiction), which starts in a couple of weeks.