Another Reason Also Prevented Travel .. Me

There was another reason why I couldn't travel besides waiting to see how Heidi would improve the next 30 days after her vet trip. During the week I was waiting for the blood work to come back from the vet, I woke up one morning with some intense pain in my lower left jaw. At first I just thought I had slept in a bad position but I soon found the pain was coming from a tooth.

That should be an easy quick fix. Most likely an old filling was in need of repair or replacement. The problem was as the day moved on, the pain increased and moved up to my cheekbone and below my chin along the side of my neck.

I will say from the start that I do not go to doctors unless I am barely surviving. Luckily I have had very few health problems in my life that led me to a doctor, I've been lucky. As far as dentists, I go annually to get a checkup and cleaning and that is about all it amounts to.

I can usually find the solution or a fix by researching on the internet and I can say that 99.9% of the time, what I read about does fix the health issue. For example, the issue I had with acid reflux almost had me going to the doctor and even suspecting possible heart issues with a family history to make it a concern.

I found out by changing my diet, which I am still following and starting my 4th month today, fixed the acid reflux problem ... I haven't had any, zip, nada since that time. Plus no trip to the doctor to be told what the cause was.

So when I felt the pain move to a different part of my head, I thought it might be more than just a possible cavity or a filling that needed replaced. From my past accidents I realized it could be not dental at all but more of a muscle or joint problem.

I actually thought and I still think it might be, a problem I had from a car wreck in my 1963 VW Bus I had at the time in 1979. Friends and I use to spend a lot of weekends at the Rosarita Beach Hotel in Baja. Cervezas and Tequila were consumed in large portions and sad to say, driving did take place.

To make a very long story short, since that wreck in 1979, dental x-rays have always picked up an object that looked like a cavity, with it being in my cheek area and not on a tooth. It confused them until I would tell them the reason for that "spec" looking similar to a cavity on x-rays. Over the years that piece had moved down my jaw to just above my left upper tooth line from the corner of my left eye.

The dental techs or dentists were always freaked out when they saw the x-rays and would ask for the history of my head. I'd then tell them the story on what that was and how it got there. They were not concerned about any future damage. That accident like many other past accidents happened on a full-moon.

As I write this I have another tooth for the first time in the past few weeks now feels like it's the culprit of my pain. (Referral pain??) I know it's not, but the pain has moved today. I am also trying to sip a cup of coffee that I am craving due to my lack of caffeine and lack of sleep these past weeks, hoping that drinking that will not send me through the ceiling if that hot liquid happens to touch my lower left jaw area.

So where was I ... oh, the different pains. Some are intense, at all hours of the day or night. Until last night I have been sleeping in 45-60 minute intervals depending on when the pain wakes me up. Yes, I've been living on ibuprofen, aspirin, cold presses, hot damp wash cloths, face massages, "icy hot" cream on my cheek ... and starting this past Thursday morning I started using Orajel.

The meds not at the same time of course. Some times they work very well as all the other things I use, some times they seem like they are not there.

About the time I decide to go to a dentist or a doctor, on two separate occasions I have woke up after a couple of hours of solid sleep and there is zero amount of pain ... like it never happened. I've gone as long as 3 days straight feeling normal and out of nowhere the pain comes back ... always on the left side, lower jaw area and at times along the left side of my throat.

Through all of this I can brush my teeth over those same teeth suspected of giving me the problem, without any pain reflex. I can floss between those teeth that are painful with no problems. I would think if I had a cavity needed fixed or a filling needing replaced that brushing and flossing would let me know from the pain that is where the problem is.

So since mid-July sometime, after the vet trip for Heidi, I've been living with what I have described. Some times at 2am or 4am walking around the house in pain I have told myself there was no way I could be traveling right now and camping with my 3 hounds.

I have been playing phone tag with my old friend of 45 years that is a semi-retired dentist, hoping he can shed some light on the situation about what it could possibly be. Of course I imagine he will say I should have been in a dentist office weeks ago.

I mentioned heart issues in this blog. I don't have those but I did double check all the information I could find on the signs of cardiac problems with pain in the left jaw as a warning sign. From all the information I have read on medical sites, I don't find this being a cardiac warning.

So to end all of the rambling ... yesterday afternoon I was hit with the pain strike intense enough that it almost had me in on the floor on my hands and knees. Sadie took that as a sign that I wanted to play with her and she started by running and chest bumping me from the side ... lol

By midnight last night there was zero pain ... NONE whatsoever!!! Yet, ten minutes after laying down to sleep, intense pain. I get up and fall asleep sitting up in a big comfortable chair in the living room and sleep for a solid 4 hours. At 6:15am I get up to let the dogs out.

At that time the pain feels like it does AFTER you get work done at the dentist and the Novocain is wearing off. I go back to sleep for another 5 hours of solid sleep ... waking up with only a slight numb feeling in my jaw.

I just finished a cup of hot coffee and there was no change in the pain level.

So ... I was also a reason that traveling had been put on hold.

In the meantime some photos of the hounds. Winston is finding out that he likes air conditioning as much as he does the heaters in the winter ... thus this is his favorite position ... when not eating.

Of course Sadie doesn't care about how cold or hot it is, she likes it outside. With being a bloodhound and its hot temps along with sticky humidity ... that produces more drool ... lol

Usually around 7:30 we head out just to sit outside or take a walk through the field. Sometimes Sadie lets me know by her look that sitting is not good enough, that she wants the daily walk ... whereas Winston is more than happy to sit in the shade in "his" soft grass.


As you can see, my project in April of digging up wild bushes, vine roots and cleaning out the area before I planted grass seems to be looking pretty good for a non-professional job after 3 months. Add in a historic month of rain in June breaking all rain records since 1865 in Indiana, I have a good amount of grass. 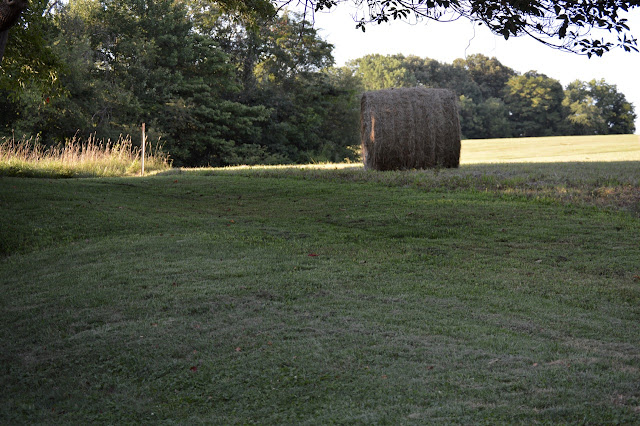 On a closing note ... before I could finish this post my dentist friend called me back about my jaw/tooth issue. I'll not go into it in detail but it will not be a quick fix. Once an dental x-ray is taken, there could be many steps in finding the source of the problem by dentists, endodontist or oral surgeons.

It was good to hear from him, what I have been doing with my self-treatment is good stuff.

I hope the issues Heidi and I are having will be fixed by the cooler temps of September where we can head west. That is the plan anyway.
at August 01, 2015