I had one answer to my question a few posts back, asking if anyone knew what those tall green plants/trees were growing along the fence. I had used google in the past and thought they were Sassafras saplings .... well they are Giant Ragweed .. I think that is better than Sassafras trees.

Before I bore you with details, I did a search on Google for blogs that talked about pulling weeds. While pulling weeds today I thought a blog just about my pulling weeds would spare you the details of my new hobby but also might lead to some affiliate income later on. (joke)

After seeing there were 902,000 blogs just about pulling weeds .. I decided the market was too saturated and I ran back to "Hounds RVs and Retirement Living" to post about weeds.

I knew before I started this project that it could be dangerous. There is absolutely nothing I can do outside the house, away from excel spreadsheets, from changing oil in my car to even mowing the yard ... that doesn't have some "Murphy's Law" involved. Something seems to always happen that is totally unexpected. But I knew the job was dangerous when I took it ... even without power tools.

Well today was that day.

I woke up a little sore and really stiff. I couldn't bend over to pick up the water dishes for the hounds to refill or give them fresh water for the day. I thought before I made any decisions for the day, like pull or don't pull weeds, I'd have my normal two cups of coffee and see how I felt.

For the past week I have been taking 1,000 to 3,000 mg of MSM, an anti-flammatory that is not as harsh as ibuprofen ... so with all of my stiffness this morning I took the three 1,000 mg capsules and waited a while. At 1pm I was watching the Colts first preseason game when I realized I really wanted to go outside and pull weeds.  How weird is that for a self proclaimed football addict?

After a short period of time I grew tired of watching 2nd and 3rd stringers trying to make the team, that missed tackles and lacked in pass coverage. I turned off the tv and headed outside. With my gloves, the ballcap, the hand tool and my 32gl trash can, I started by finishing that section where I ended on Saturday.


After finishing that section I wanted to stay in the shade so that eliminated going down the sides of the driveway. For a change of pace I decided to walk around the drive and pull anything that was tall, any weed that was isolated. That included going all the way over to the fence, down equal to the front of the house. (I just can't stop anywhere ... there has to be a marker) 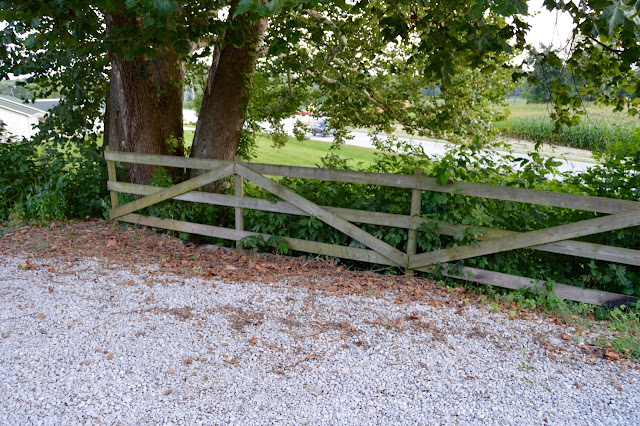 I had heavy growth around the grounding cable of that utility pole and also around the AT&T land line telephone transfer box ... it's the home of about 15 phone lines that my neighbors still have for landline phones. I started removing the weeds around that utility pole but when I got to the AT&T telephone junction box that is where things get exciting.

Over the months of the winter, spring and then the summer rains .. the ground had moved up along that transfer box and cracked the cover open. As I cleaned around that box, I moved the level of the dirt below the box. I could now take off the cover, then slide it back in place all the way and tighten it down.

Now .... this is where the danger of pulling weeds raised it's ugly head. As I lifted off the cover of that junction box I did not know there were at least 20 wasps in formation with their engines running, ready to attack the person that opens that box (ME). And attack they did. I tossed the cover into the air and took off sprinting for the house while getting stung a few times. Right before getting to the door I glanced behind me to see how many were following.

In my very short glance I saw more than 5 in my line of sight. Slamming the door, I headed to the medicine cabinet for some first aid. I did not see any wasps had made it into the house, but knew that I had made them mad ... so I would have to move my trash can, pick up the cover and start pulling weeds in a different section of the driveway.

Sorry, due to the high speed actions and my urge for survival ... no photos were taken during or after the wasp attack.

I used the last of my wasp spray standing 5ft away. I knocked their nest out from the inside of the box and tossed it over the bank. I knew the rest of the afternoon I would have to keep an eye out for any wasps doing 'fly bys" over my head or around my shoulders.

I decided to head over to the utility grounding cable. It wasn't soon after I started that I ran into my 2nd problem ... ANTS ... the kind that bite ... hundreds of them!

They were easy to get rid of after they covered my lower legs and ankles. I then decided to start at those 6 red tiles (Sadie's Patio) and work my way toward the utility pole. I then continued to swat wasps as they flew by me.

At times I would walk over to the junction box and kill as many as I could. I didn't feel any guilt about it nor could I remember any good things a wasp does on a daily basis but sting people. I'll google about them later, still the least amount of wasps around the house, the better.

By the end of my 3 hours I had completed the outlying area around the top of the drive. So now I have only the center that is left and the section of gravel that use to be the parking space of my 1994 Chevy Truck (should have never sold it).

Finding it was easy and fast to pull weeds along the fence line in the shade .. I decide that I will pull weeds along the fence line all the way to the bottom of the driveway. Rain is schedule for Monday - Wednesday so we will see how that works out. Based on what I have done so far after a total of 8-1/2 hours of work, I don't think I am that far from completing the weed pulling job.

I find that pulling weeds is relaxing to me. Similar to painting a house inside or outside, something that I really enjoy doing .. painting that is. Plus at the end of the day you can see progress, something that looks better than when you started. Once I am finished and during the times of the year that I am living here, I think it will be easy to maintain the "no weed" policy by pulling them as I see them. You can pull a lot of new weeds in only 30 minutes.

Also another factor ... there are NO CHEMICALS involved, which can't be a bad thing.

No photos were taken of the hounds today. Winston and Heidi stayed inside enjoying the air conditioning while sleeping all day. Sadie spent most of the time outside with me and finally becoming bored being the supervisor, she took a long nap in the shade under the Toyota FJ. By the time I ran inside to get my camera to take a picture of her, she was awake and standing at the door.

Something was said today about Heidi that makes more sense than any other reasons for her wanting to be inside all the time. She will always go to the door when she needs to go outside but returns almost immediately to be let inside after she is done dumping her tanks. While the other two will roam the field sniffing every inch of ground as long as I leave them outside.

I don't know a lot about Heidi's first 3 years of her life. All I was told by the foster mom when I bought her from GABR, that she had been in and out of shelters most of her life. I was told she did and would run away a lot if not on a leash at all times. That she had allergies that required shots.

I found out soon after that she would NOT run away off leash. She goes outside without a leash and without me going outside with her. When she does the daily walks, she walks off leash and has never ran away.

I was told today that she may not like staying outside a lot because in those first 3 years she may have been left outside tied up in all kinds of weather. A reason that she would escape and take off running, then end up in the animal shelter. That's a possible reason why she only goes outside long enough to pee and has never liked "hanging out" outside in the sun with me and the other hounds.

A reasonable idea or thought.

I sit here in "the tropics" of southern Indiana away from any weather danger since it's not tornado season ... watching and reading about all the fires out west and up in Canada. It is just unbelievable from this distance how long they have been going on, how those fire fighters (Undermanned) have spent 7 days a week, 24 hours per day fighting them with occasional naps... while they may go on for another couple of months. How much damage will there be when they are finally put out? I would hate having to leave everything behind to evacuate, some have left on foot.

Also for those traveling to the SW this winter. From what I read about the powerful El Nino predicted this winter ... those Soutwestern states are due to be cooler and wetter than normal. More snow in the Pacific Northwest and colder than normal temps here in "the tropics".

I have to decide for this winter do I want to be freezing and dry ... or warmer and wet.