A Rare Three Hound Photo Outside 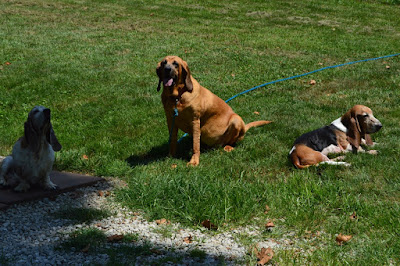 It's been over a year since the three hounds were all in the backyard together. Heidi rarely goes in the backyard. When she goes outside she hits the corner of the front yard and then she might wander along the side of the fence line .. but for some reason she rarely heads to the back.

Maybe she is feeling better, although by her skin rash, there isn't a difference from the past weeks. I see a shinier coat, it's softer with the change to Earthborn Holistic No Grain, the Plains Feast blend. I haven't made the trip to the vet to use their scales but I swear I can feel some muscle coming back around her neck and shoulders. One of the photos from today looks like she is gaining some weight, I hope so. 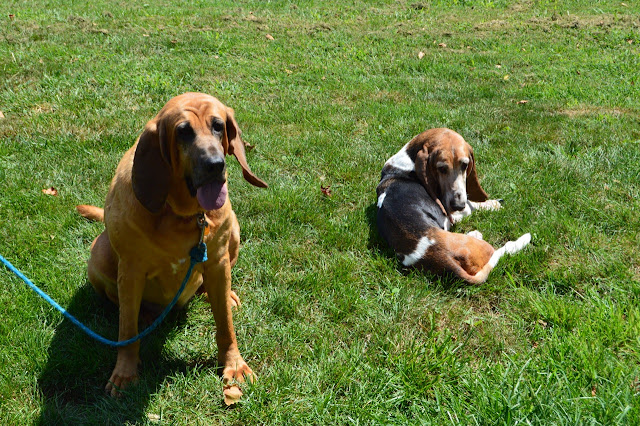 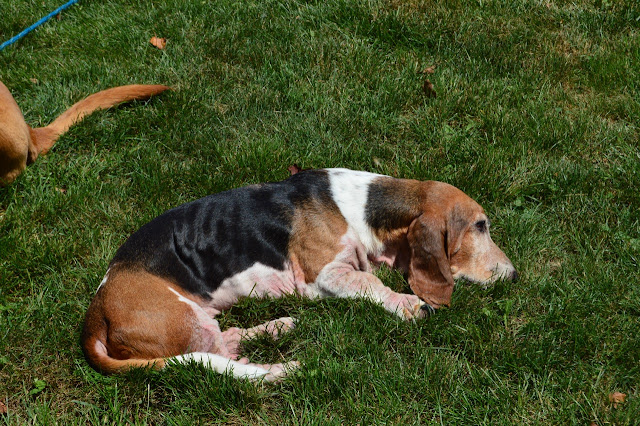 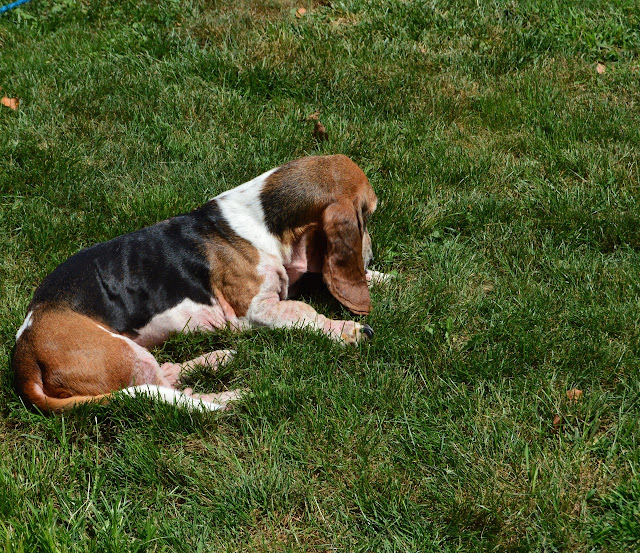 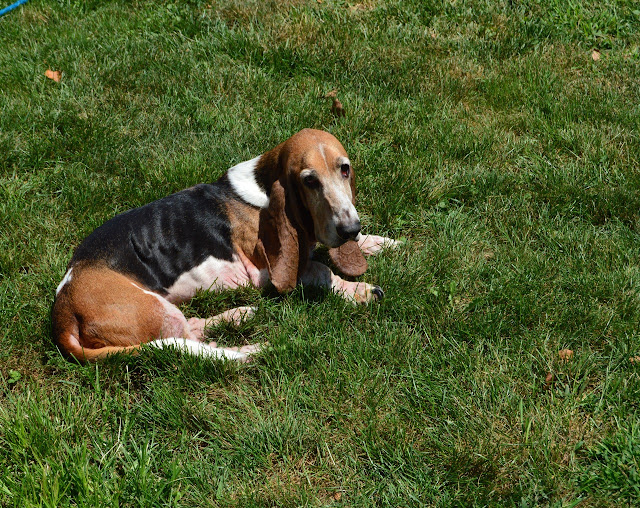 I wanted her to lay in the sun for a while thinking that might help her skin rash ... then again, laying in the grass may activate her allergies and make them worse. I'll check her later tonight. She didn't stay outside long. It was 82° but the iPhone weather said it felt like 89°, all three of the hounds prefer air conditioning and went running for the door after the 5 minute photo shoot.

The dental work I had last Monday seems to have worked out this week. It was nice to get back to normal, get some sleep and also not having to tolerate any pain. The week was so slow I am really not sure what I did. Looking back on the past four days, I didn't take any siestas, I didn't waste all day on the internet but I did do a lot of book reading.

Each time I looked out the kitchen window or took the hounds outside, I'd see my garden of weeds along the driveway. They were almost overtaking the driveway, like I stated in my last post. I couldn't come to grips with paying more money for weedkiller, since it never lasts as long as they say it will. In fact it seems to me, the weeds grow back stronger and faster than ever after they turn brown. 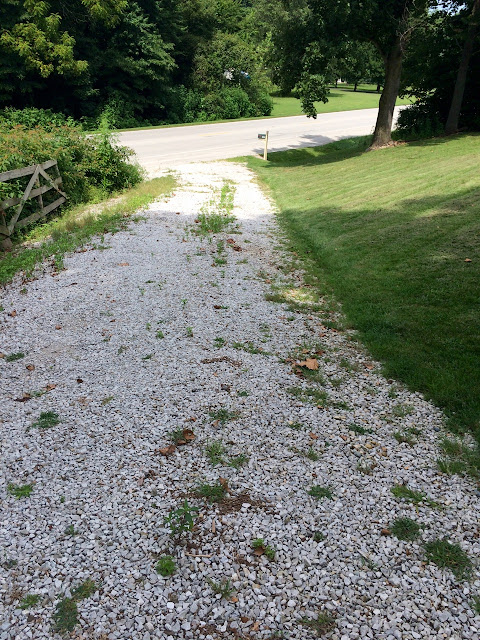 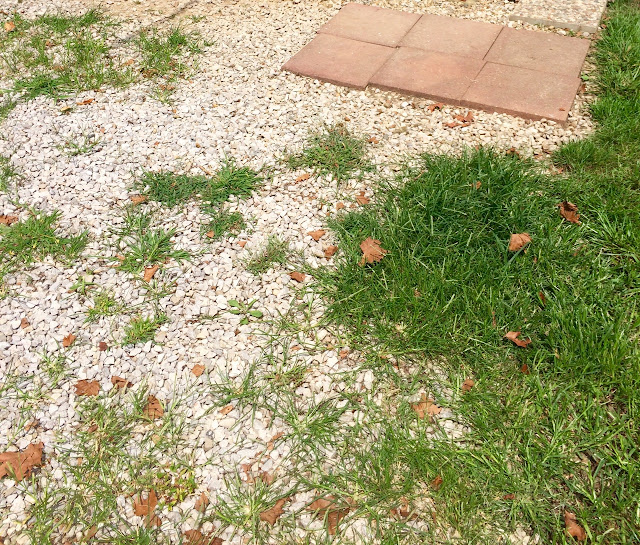 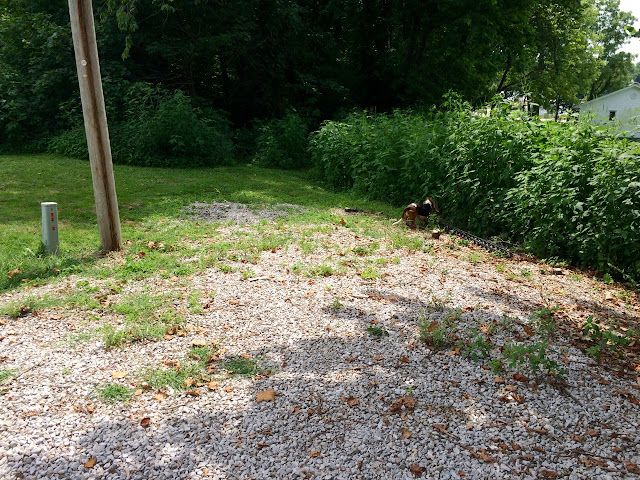 So much for that black plastic material that is buried 6" below the mulch to keep the weeds from invading your flower beds. Does anything work the way it's suppose to anymore or is that just an advertizing dream?


It's happened that was every summer I've been here, all 18 of them. You'd think I'd come up with a different plan by now. So I asked a friend that spends a lot of time working with her yard, flowers, plants, etc. She said she pulled her weeds. Of course her long driveway is asphalt, whereas mine is gravel ... so I knew my job of pulling weeds might take a little bit longer. It was something I'd have to think about.

I know that no matter what I do, spray or pull them, the weeds will always grow back ... but maybe I can control them. Besides, the idea of pulling weeds was making me very curious ... curious enough to pull a couple of the easy crabgrass weeds out of the gravel driveway. They came out of the ground, through the gravel easy. I decided to get my gloves and the 32 gallon trash can that I use only to gather leaves, sticks and now weeds.

These gloves remind me constantly that I am the boss.

So Friday around 1:30pm I decided why not? Let's see if weed pulling is all it is made out to be. Of course I had wasted the best part of the day with the cooler temps in the morning. It was already after 1pm, one of those sunny 84° days that feels like 90° ... but I like sun and I like heat, so I started at the top of the driveway. I was thinking about doing only the center of the drive .. but my thought process is never like that. Everything has to be even. So I would move down the center of the driveway a little way, then to each side.

Only after an hour of work, I had this much done on the driveway and my trash can was about 3/4 of the way full. With the sun is heading toward the front yard since my house faces west, It was getting extremely hot. I decided not to quit and just move my efforts to the shady side of the house ... in back. This took no more than 30 minutes.

Pulled one weed at a time, anything from large crabgrass to small sprouts of new grass. 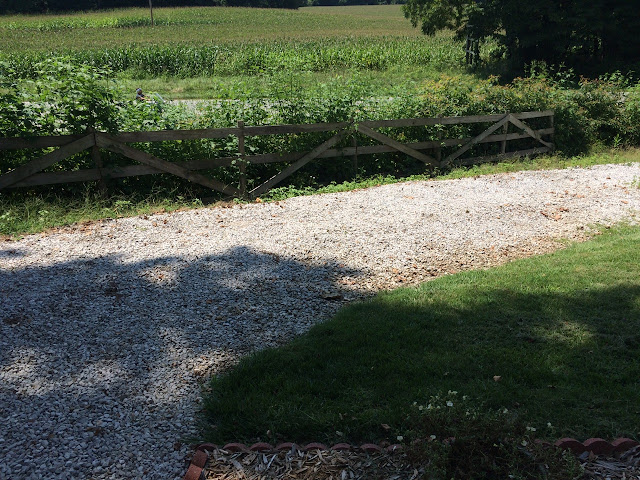 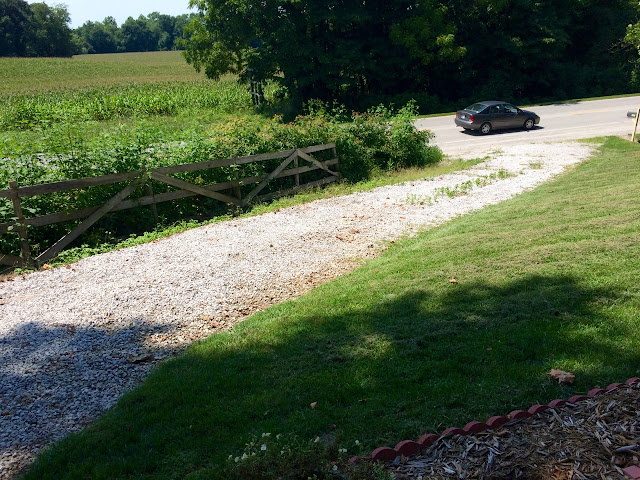 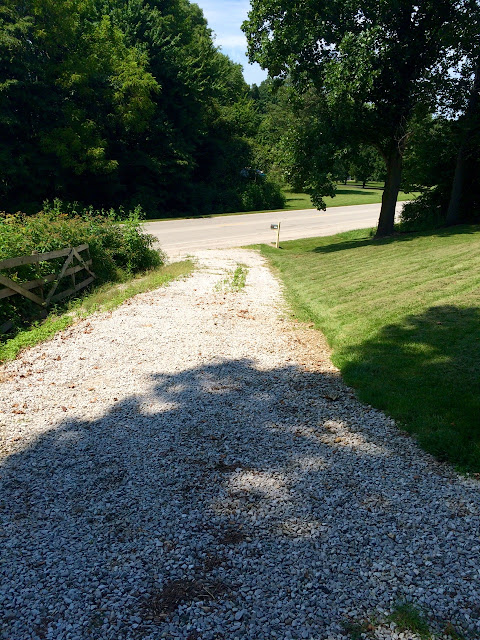 I had seen and felt enough so I emptied the trash can full of weeds on my burn pile for next spring and headed to the shower ... I was tired but encouraged by how much was done in less than two hours.

I had decided to start earlier this morning but due to a sleepless night and up until 4am ... I didn't get my 8am start on the weed pulling. I did start at 11:30, moving all the way down the center of the drive ... then toward the left to pull weeds over the culvert where the weeds covered my stone I installed a few summers ago. By the time I was about to move up the side of the driveway I decided it was just too hot at 1:30.


I took a nice hour break inside drinking a lot of ice cold water. Stopping any kind of work outside is bad for me, because I lose my momentum, or I get distracted and end up doing something else. I wanted to do just a little bit more.  So I began where I started yesterday working towards the backyard. I was only going to get to where I was even with the front of the house and stop . I kept going longer. 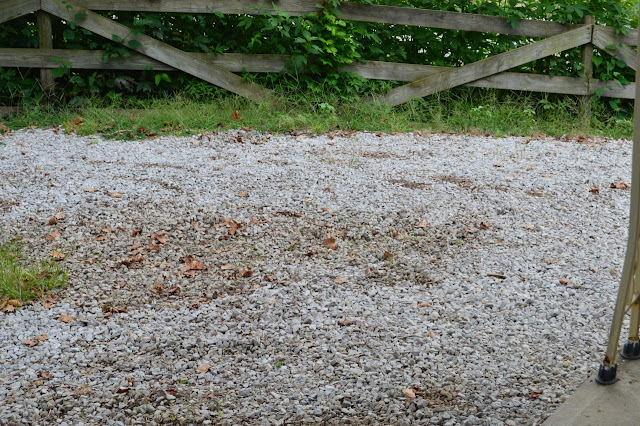 I wasn't in the mood to wash the Mini Cooper, so I decided to go along the front of the carport, double arms length. I would have finished what was left, all the way to the yard but in the last 15 minutes of working, the bugs, and gnats decided to come out to bother me ... so I called it a day. I was still amazed how much I was getting done in a short period of time.

Granted, it would be much faster to walk around spraying chemicals to kill the weeds but this week I am not in the mood to waste money. Maybe paying the dental bill put me in shock, i don't know ... but I don't feel like spending ... unless I go to Dairy Queen.

So tomorrow I plan on continuing my weed pulling. I'll finish up the end of the section I was working on, but I also want to finish each side of the driveway ... I'll do that first before the sun moves over the tops of the trees making that front side very hot. Once this end of the top section is finished and both sides of the driveway, I'll decide from there if I want to keep working or move to the top of the driveway on Monday.

I am pulling out by the roots, anything that is green .. large or small. In fact I doubt that I have missed very many small sprouts. So far I have 5-1/2 hours of labor. This little tool I found in a drawer this morning made things easier on Saturday. It was mouse tested, with some signs of chewing on the handle. 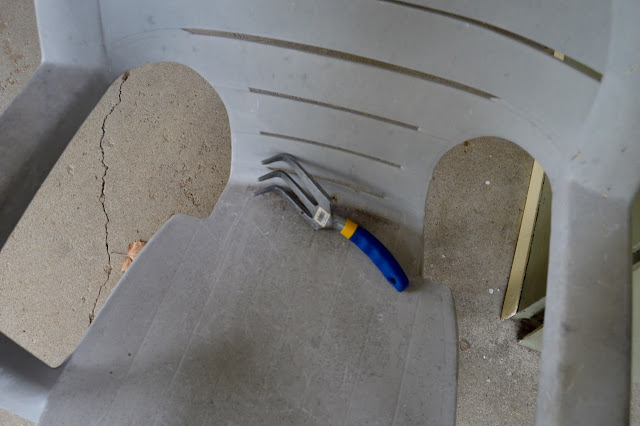 Another 30+ gallons of packed down weeds on Day 2.


If you made it reading this far I'm surprised, it just shows you how slow life is sometimes in "the tropics" of Southern Indiana. I don't lead a thrilling life ... I mean this week after the dental work, pulling these weeds have been the highlight of the week. I have watched a couple of NFL preseason games on Thursday and Friday night ... will watch some more tonight. Then I flip back to the Cincinnati Reds - LA Dodger game in Los Angeles during the football game commercials or vice versa. The Reds games don't start until 10pm local time.

The hounds and I hang out mostly and take each day as it comes. I find it interesting that this is what I am blogging about publicly ... so I guess it was this topic or another day of no posting. At least there were some new photos of the hounds. 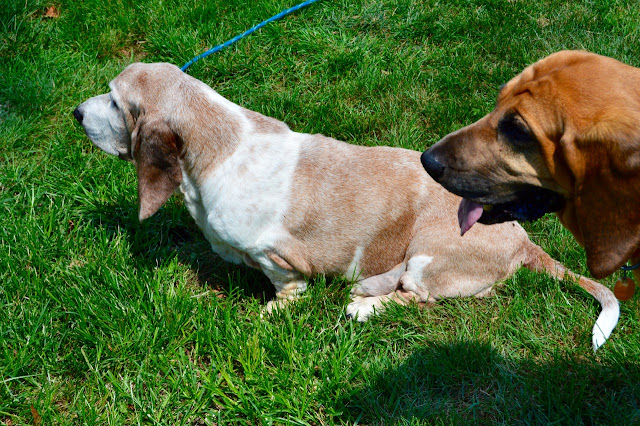 I will say I was amazed how sore my hamstrings were this morning after only an hour and a half of bending over to pull the weeds out of the ground.

I may fall off my diet wagon for an hour ... I have a strong strong urge for a Hawaiian Blizzard from Dairy Queen. That isn't all bad is it?? It has pineapple and coconut in it ... LOL
at August 15, 2015