A Lot Of New Info Today 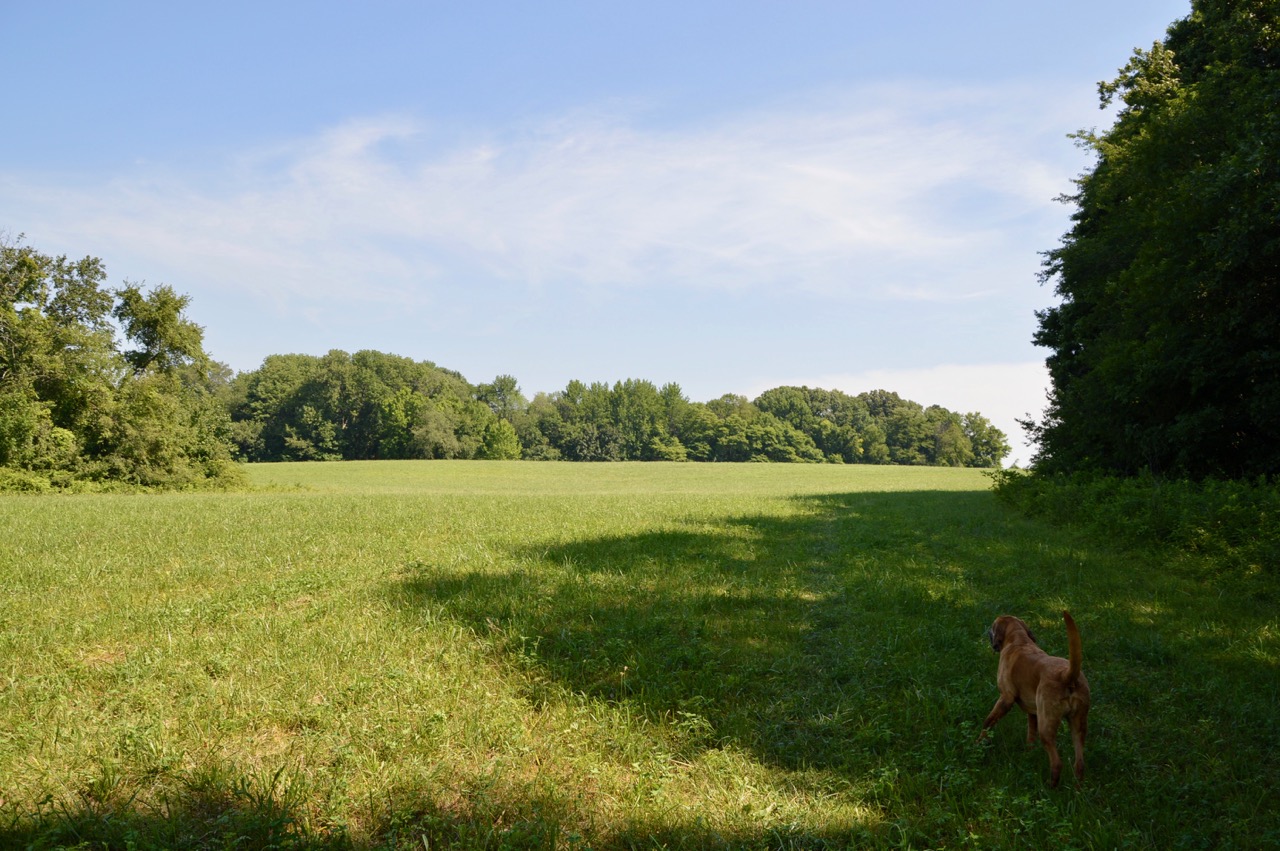 The day has been jammed packed with all kinds of activity and it's not even 2pm when I am writing this. Just glancing at the picture above, one of our first of the day without my new circular polarizing filter I can see a major difference. I think you will too in some photographs below.
I know and the hounds know, it might only say it's 88° at noon but it feels like the hottest day of the year so far, consequently they are all sleeping in air conditioned rooms as I write this. We will walk again today but not until after 7pm. Wunderground tells me it might only be 88° but "it feels like" 102° ... I guess that is why all three hounds didn't stay outside long after their lunch. 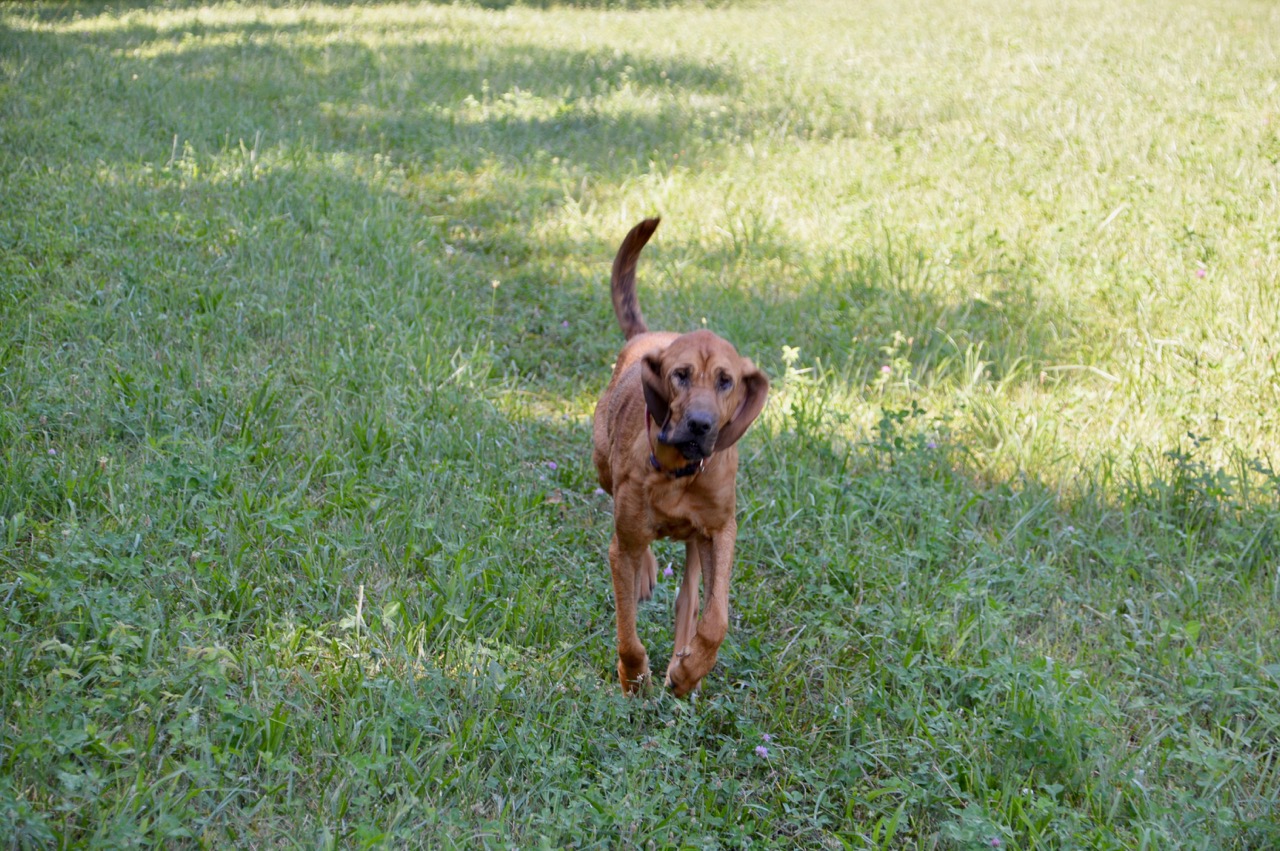 It was already very hot at 9:15am when the white Ford F-150 pulled into the driveway with the electric company log on the door, driving to the top of the drive. That can never be a good sign on an extremely hot day ... especially since the power went off for about 15 minutes an hour earlier. What could this be? 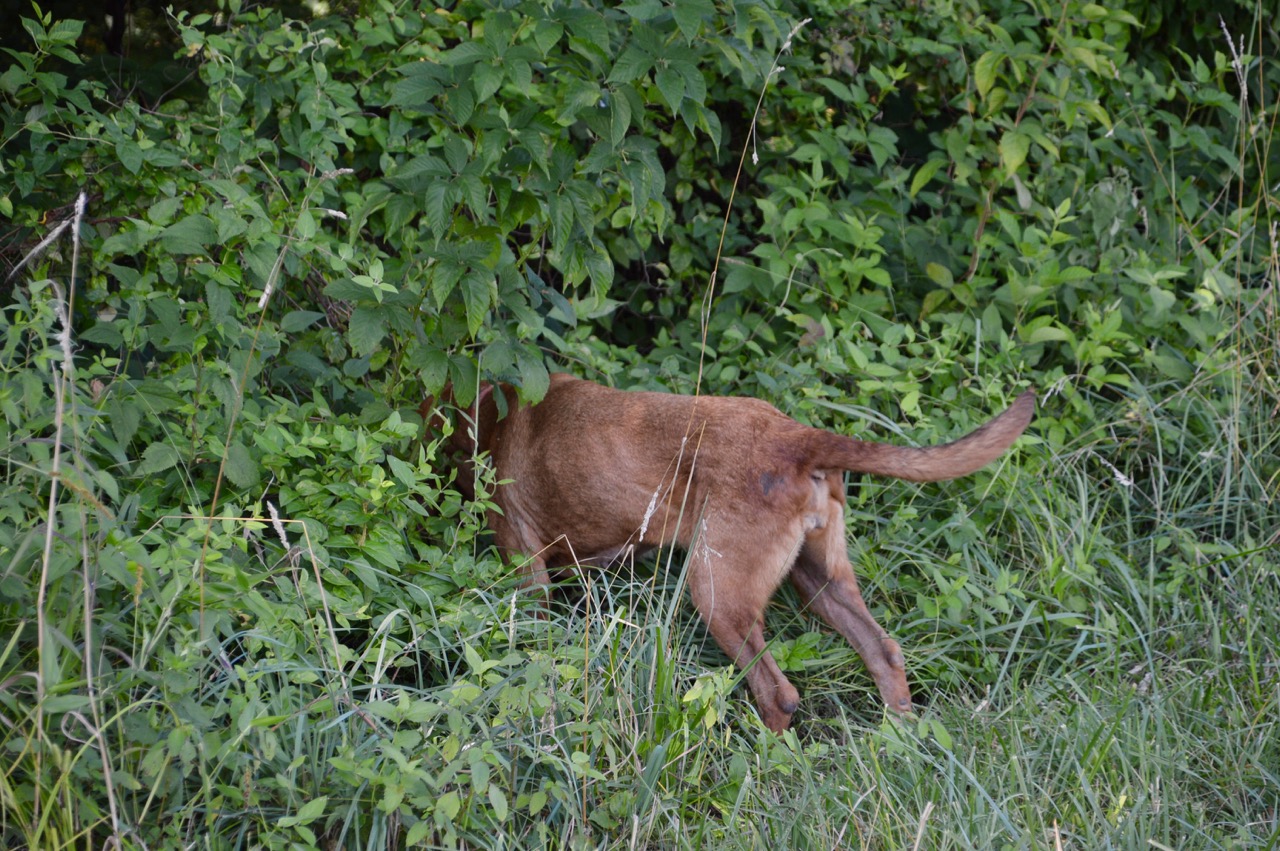 They are installing a second system of power lines that will go across the creek where I take pictures of that old steel bridge, over to the next road. For them to set up the new wiring, my power was going to be turned off for almost two hours on a day as hot as today !!!!

Luckily when he passed that same news to the owner of the landscaping business it was soon canceled and moved to tomorrow at 6:30am, a time that I can handle no power because my body has no power being sound to sleep. So shortly after we all get up on Thursday, power should be restored just in time for the AC to kick on and prepare the house for another hot day. 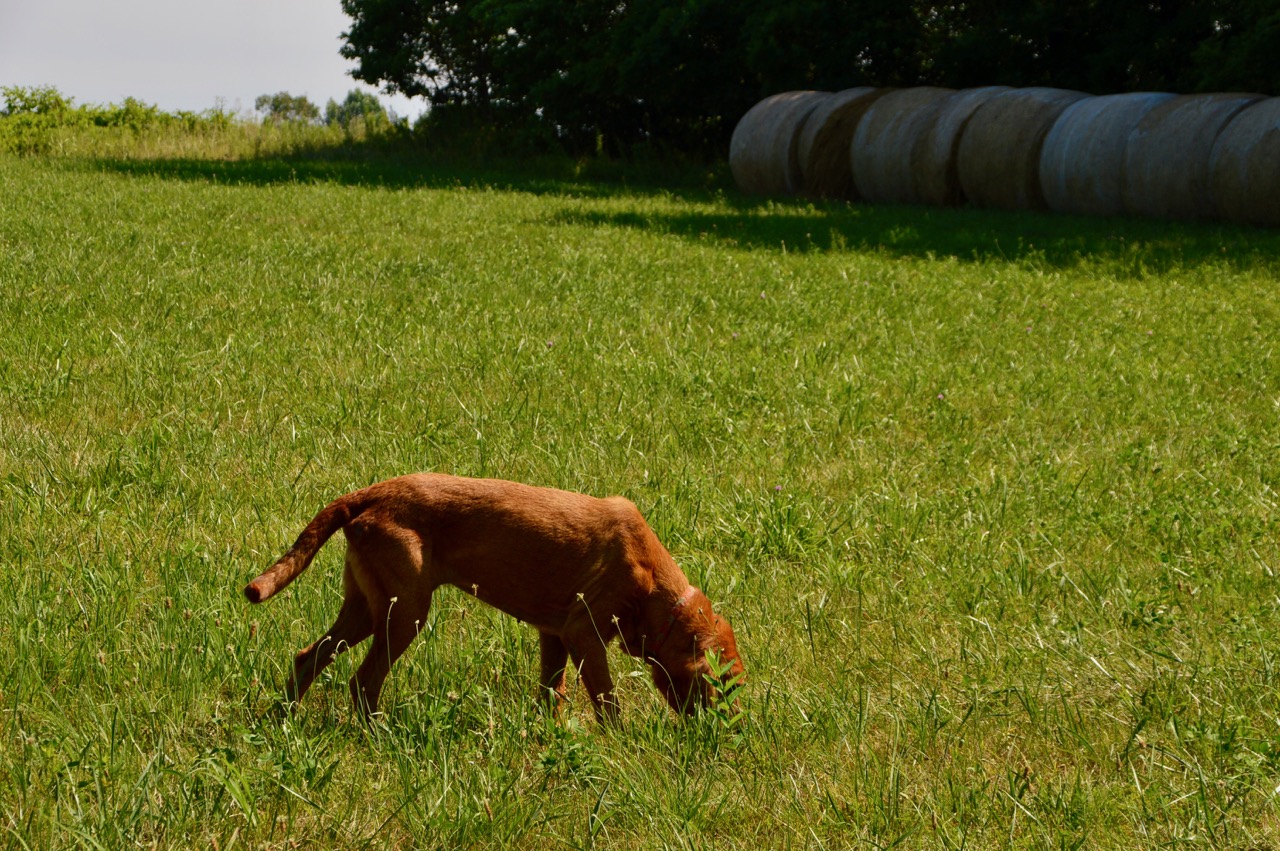 When he came back to give me the new news, the hounds and I had just started to go on our walk. Both were pretty excited for any kind of visitors and a ton of new smells all over that Ford F-150 truck for them to check out. While they inspected that gave me and the utilityman time to discusses world events like satellite tv, internet service, insurance for home and cars, Ford trucks or Chevy trucks and how to flip services every two years to save maximum amounts of money. I was getting free advice and didn't even ask for it ... it was all good info as he also lives in a rural area even more isolated than my house. 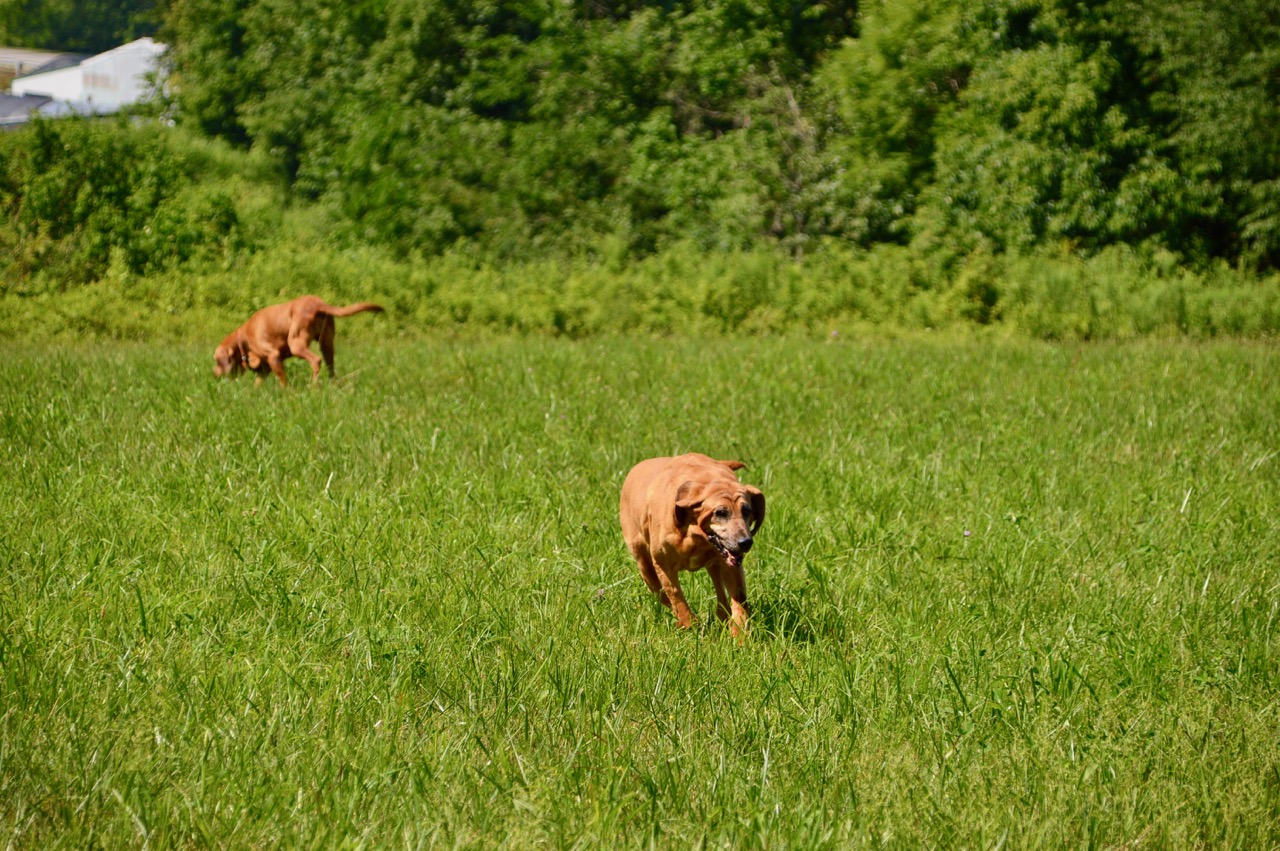 We talked so long as he was being paid to work, that Sadie and Stella fell asleep on the warm concrete floor next to the Mini Cooper. When he left I had to wake them up to see if they were still interested in walking. They were and it's all the pictures you have seen so far. 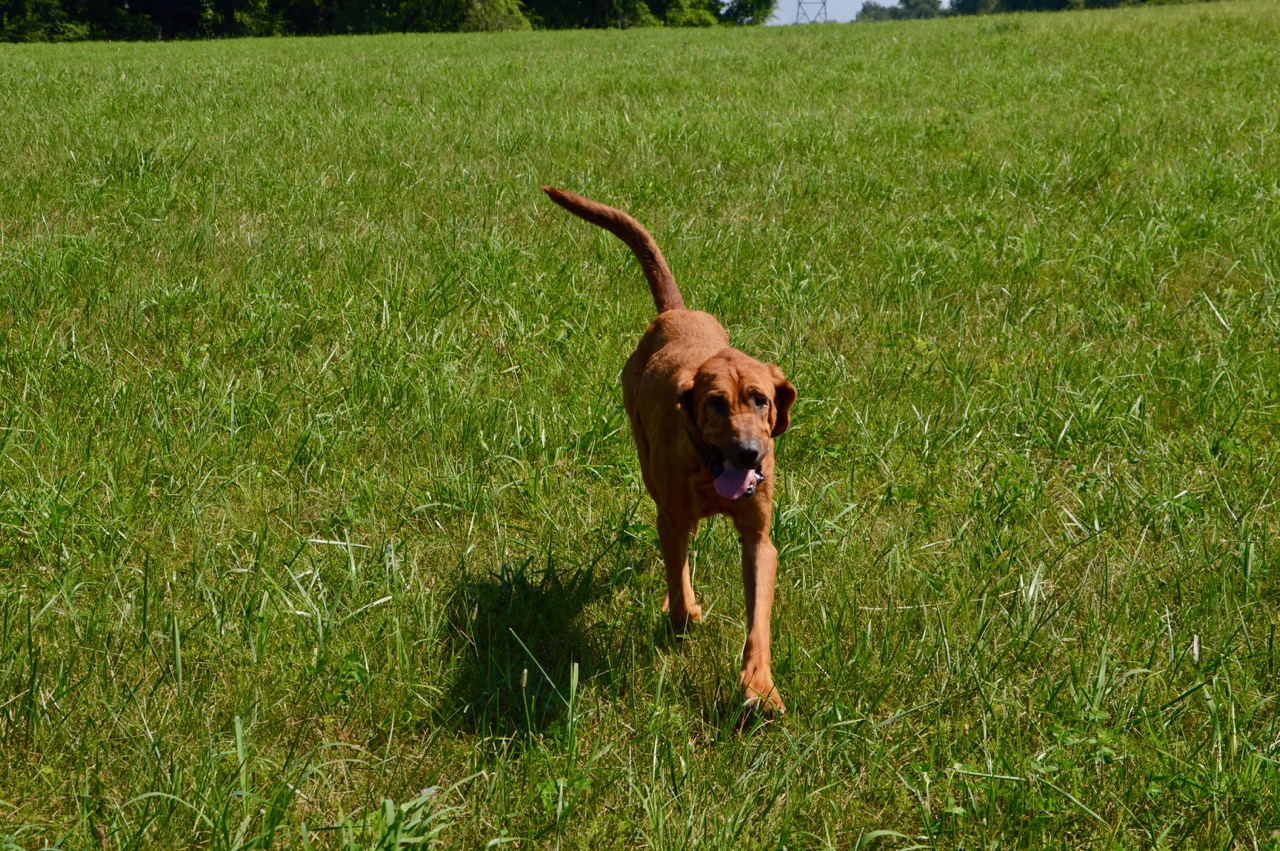 I caught Stella RUNNING just a little today and then once she caught up to me she stopped to walk along side of me. She seems to be getting stronger by the day on these walks. That's great to see. 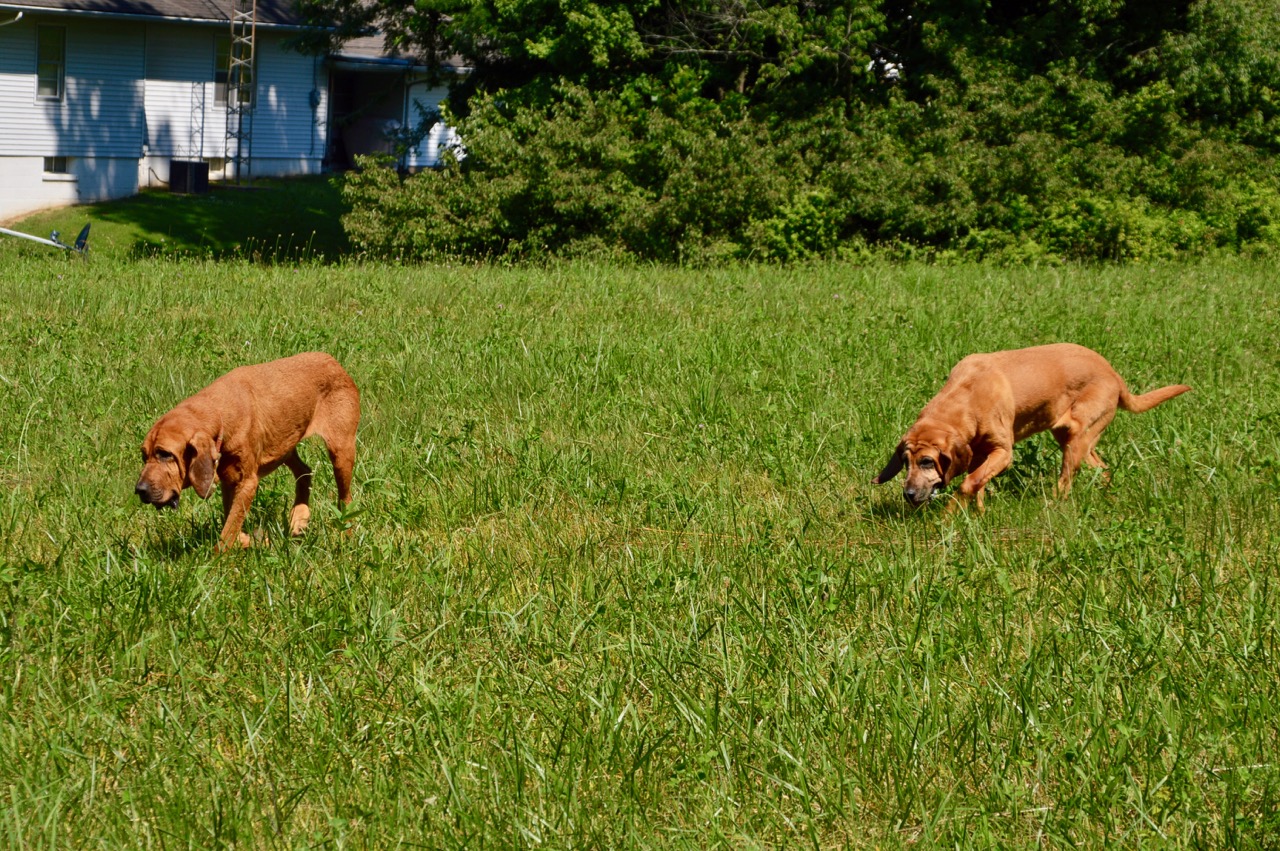 I know that by the time we finished the walk, Sadie Stella and I were more than happy to know the power would not be off for almost two hours. That change in temps inside the house was a lifesaver. It is really ... really ... hot today.

The photos above were all taken on this mornings walk. After lunch I checked my mailbox hoping to see the camera filter had arrived a little earlier than normal. It was the only thing in the mailbox ... so I didn't hesitate to try it out. I don't like captions under photographs so I'll describe each in my content.

This photo is the start of all being taken with the Hoya Cir-Pl filter on the camera. At first I could tell very little difference in the sky as I tried to adjust it for maximum effect. So I lined up the white mark on the filter dead center on my lens. 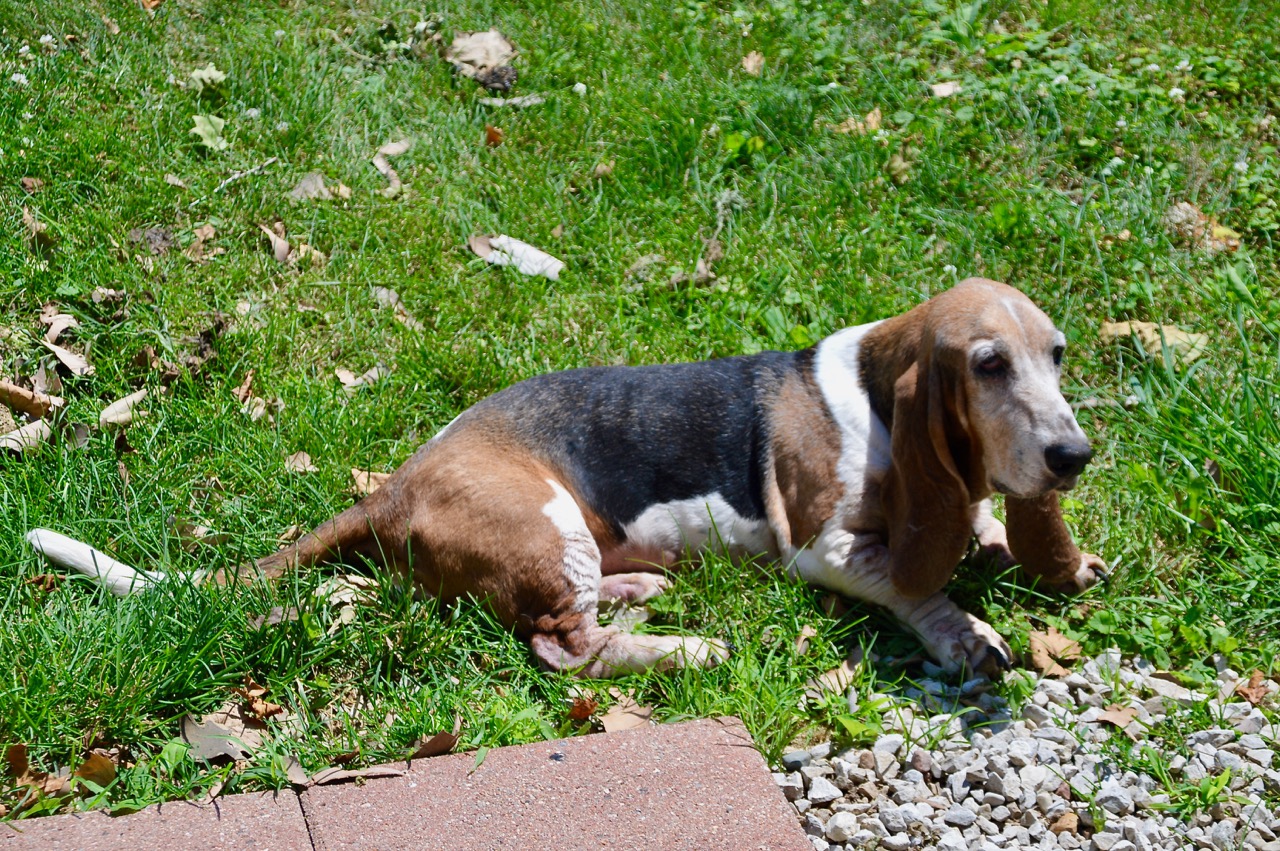 With the editor in Apple Photos on my computer where all photos are stored, I hit the "auto for sharpness" ... Apple Photos is like My Pictures on Window PC's. 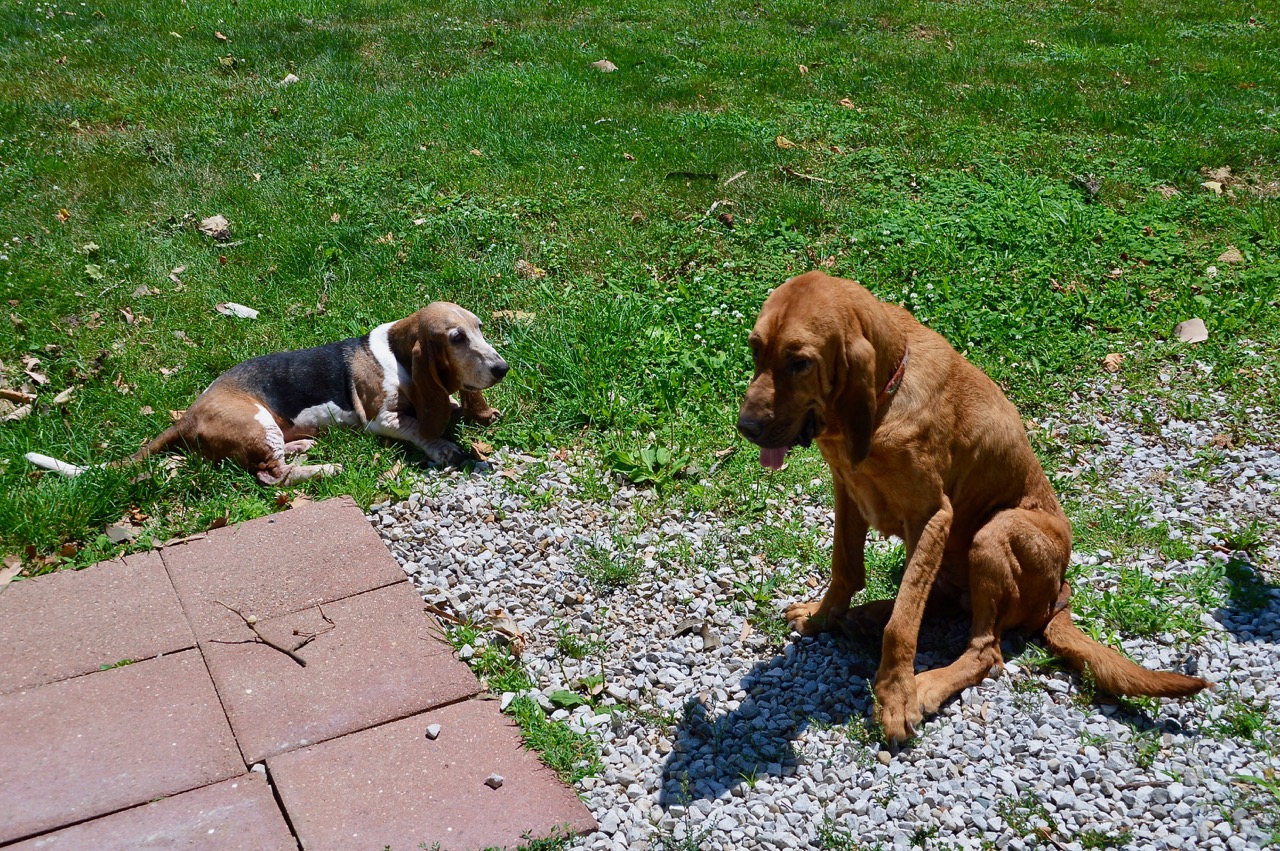 While looking at all the pictures after I downloaded them this afternoon I couldn't tell much difference. Lighting is always good later in the day so I may not see the true improvement until I take pictures in the morning. 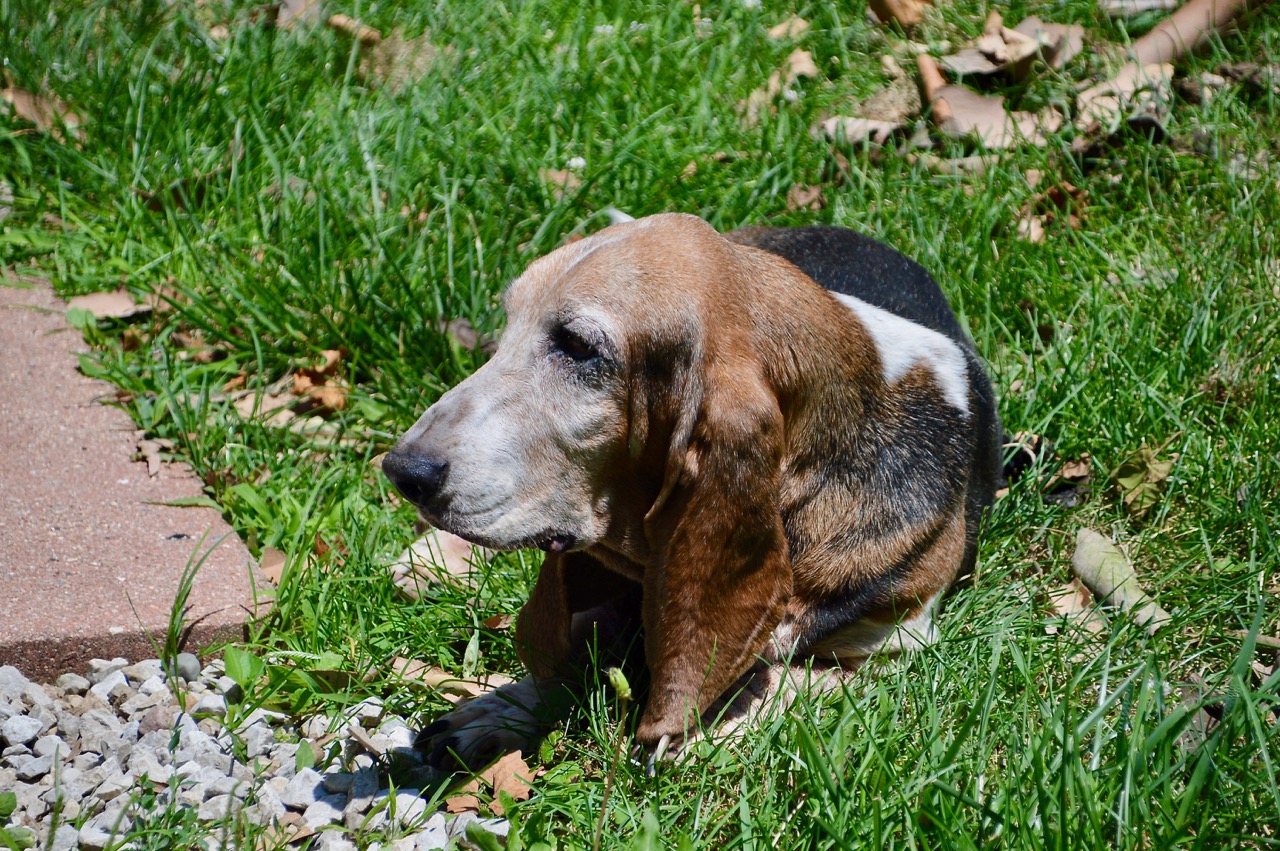 Even though it was hot I think Heidi would have sat here in the sunshine much longer than she did. Once she saw I was walking toward the door, she stood up and ran to go back inside ... it must have been hot to her. 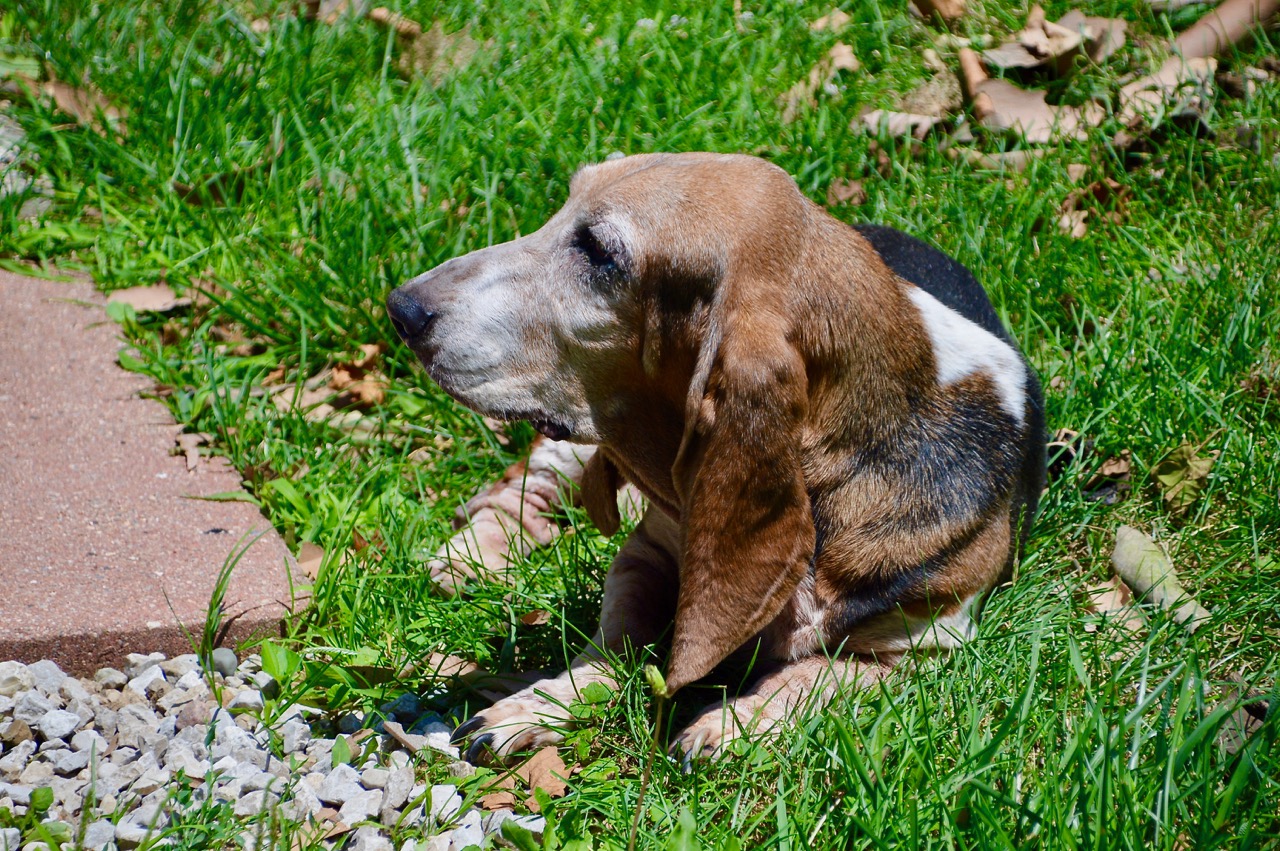 This next picture is also with the filter on, and no adjustments by me rotating the filter to get the maximum picture. 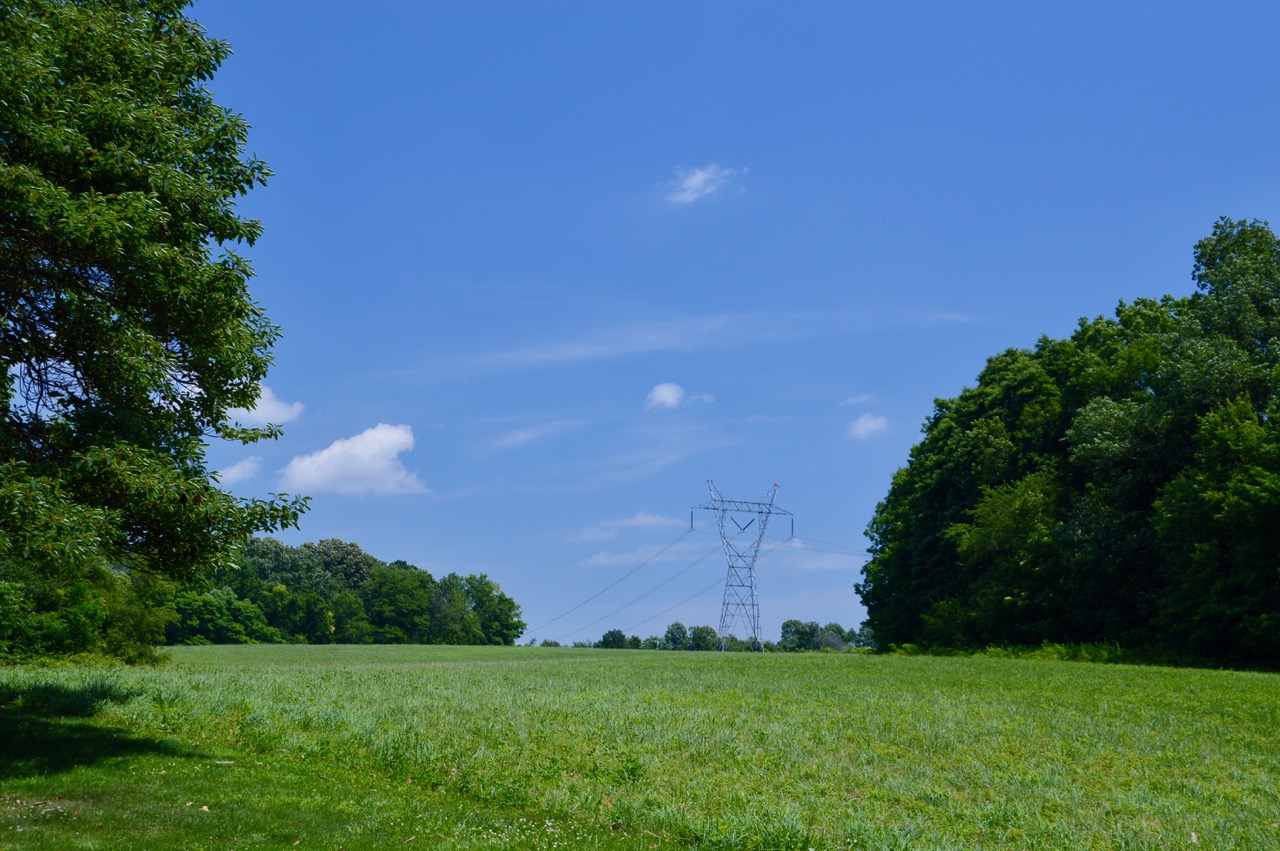 You might think "ah ha ... he adjusted the filter" ... I didn't. All I did was add color using the edit section on Apple Photos on this next photo. 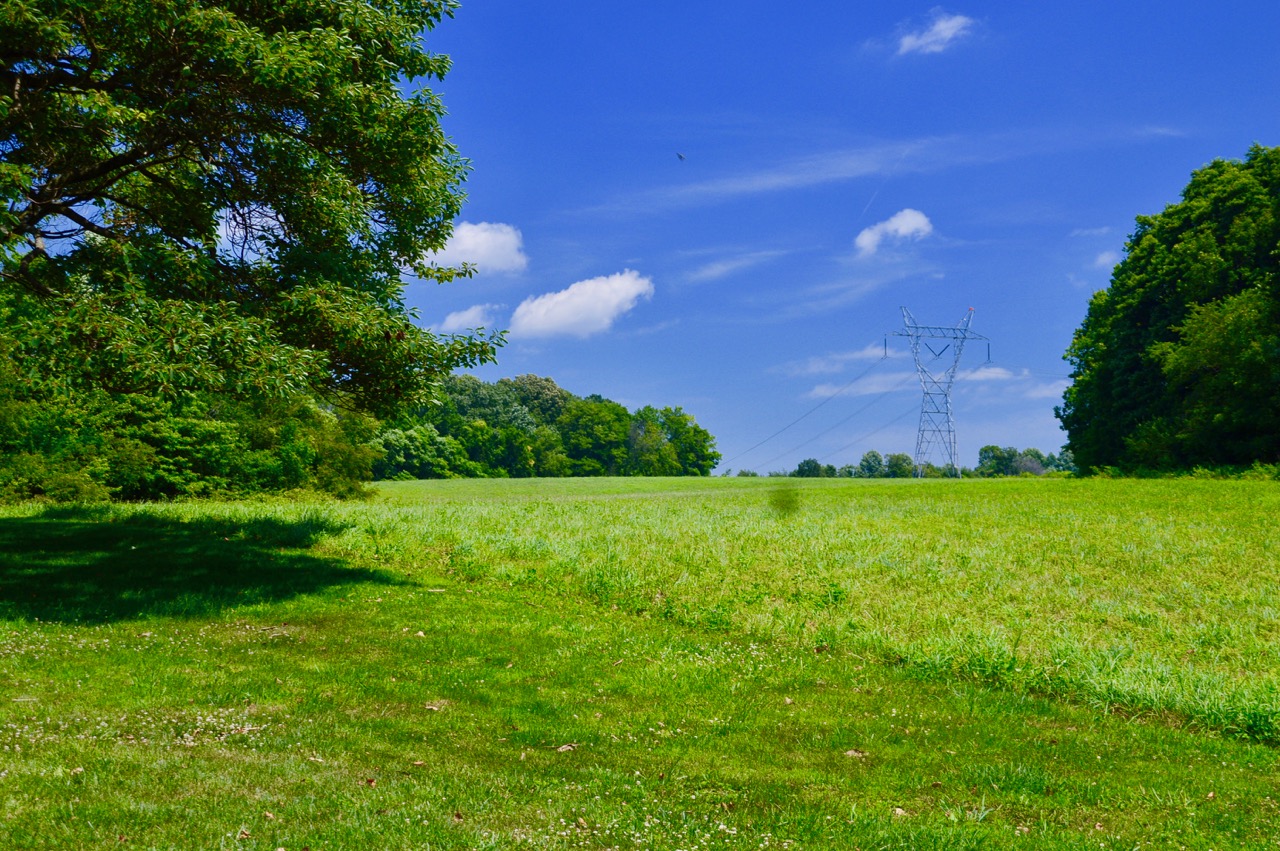 Same with this picture. It's too much color because the green field is off ... I am going to read more about using the filter after I post this. 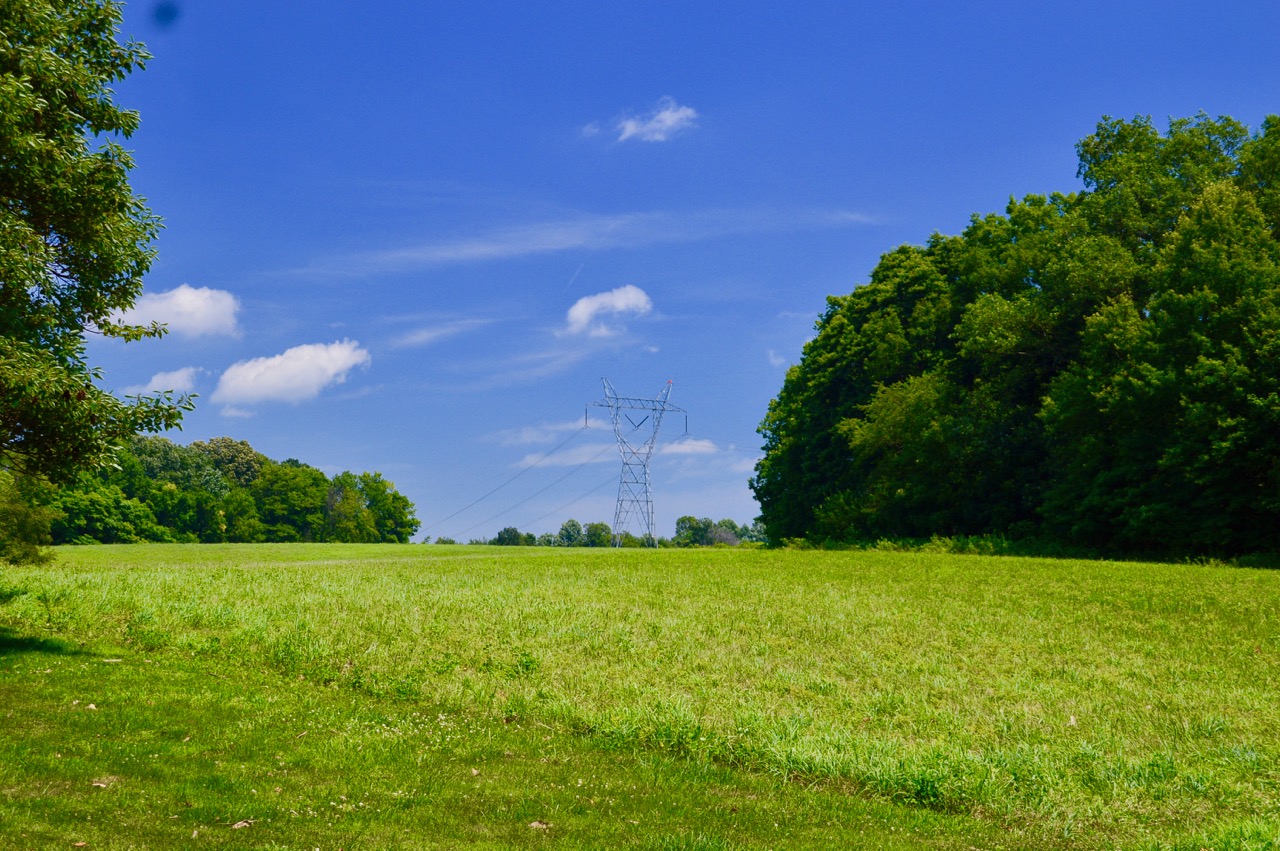 I moved the white marker on the filter back to dead center and shot the rest of these pictures. Here I caught Sadie dead handed eating fresh brown power dirt that the moles had pushed up in the yard. I added a little sharpness in the editor program. 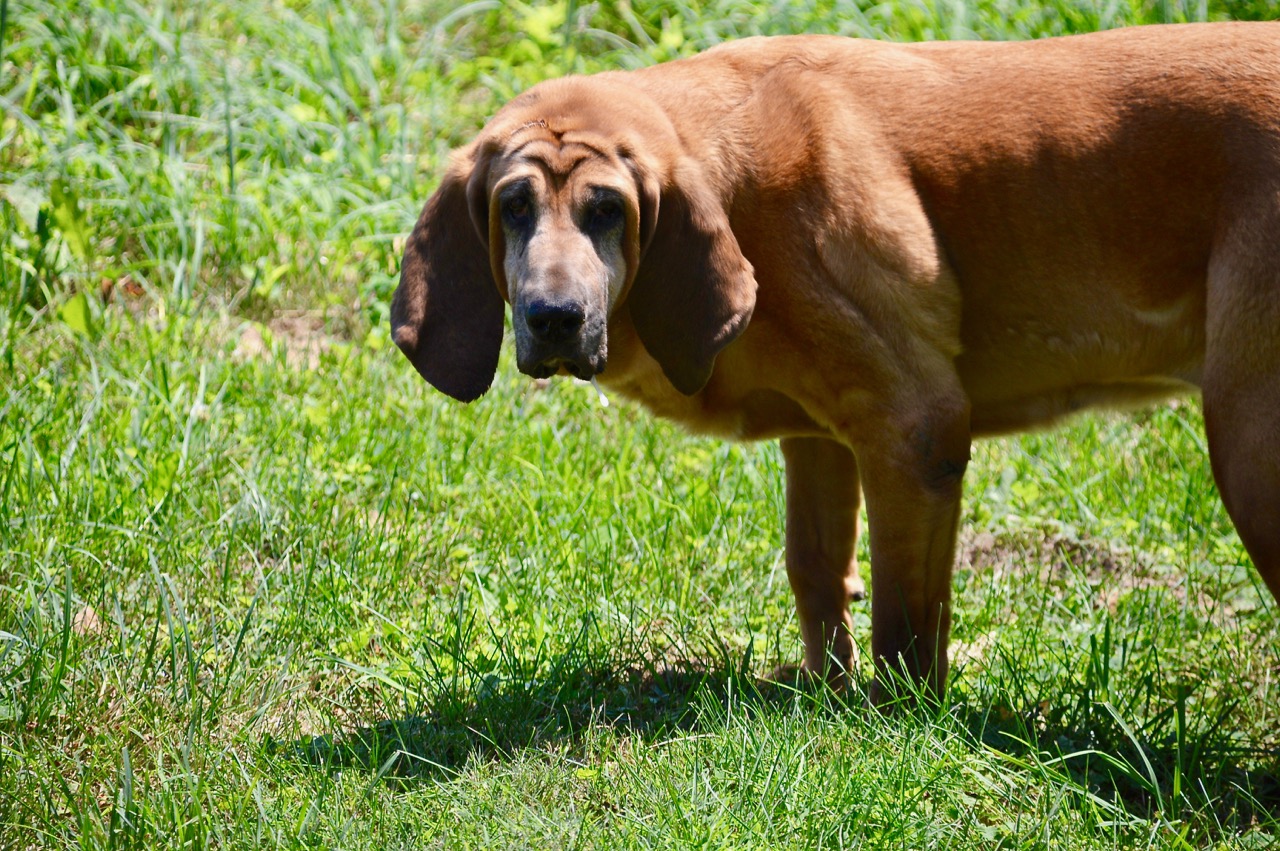 Now to confuse your brain cells and eye sight while discussing this circular polarizing filter ... this photo was taken days ago without any kind of filter, straight lens and at the same time of day, +/- a few minutes. 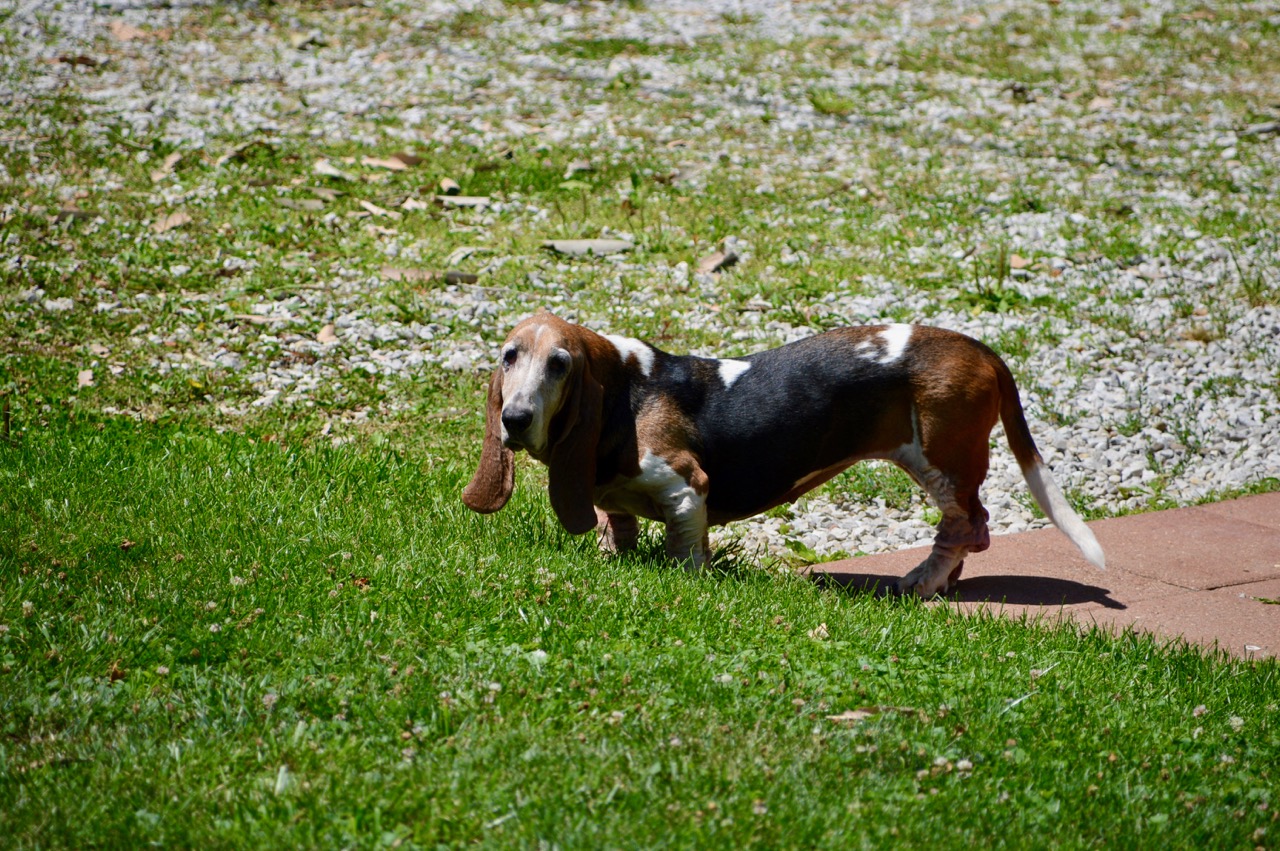 No adjustments of any kind were done to the picture of Heidi.

The pictures and lens filter, along with turning the power off is not all of the good news today. I found out something very very nice and you might think so too ... IF ... you hate all the automatic videos that play on news, sports and other websites. Sometimes when you pause the largest on, a smaller one restarts in another part of the page. Very very annoying.

On the three browsers I use, Google Chrome, Safari and Firefox I have always installed extensions or apps to block pop up advertising and to stop auto play of videos. That is all me trying to not waste what little data I have to use every month, at high speed.

Those I use are AdBlock Plus, Ghostery and then going to each browser's preferences and turning off auto play. If all of that works properly I would have to click the video myself for it to play ... I would get to decide what to see not the website owners.

Lately those extensions and apps have not worked as good as they use to. Especially on news sites, ESPN or other sports websites. So this morning I had enough ... I was bothered enough to go to google search and type in "how to stop auto play video" ...

They not only gave me an extension to download from Google Chrome store but told me WHY those websites were able to get around my blocking apps and browser settings. They try 6-7 times each to get their videos to play.

But this little extension stops that ... IT WORKS!!!!

It took less than a minute to download and install. It leaves it's icon on your taskbar and once you click that to "Disable Autoplay", you do not even have to restart your browser or your computer for it to start working ... it works as soon as you click the button. That extension is available in Safari and Firefox.

So far with my normal internet activity it has decreased a lot of my data use. I am in the middle of the afternoon with only ~200Mb of data used so far today after 6 hours of being online with breaks away from the computer during that time.

I'm going to go read more about this filter and see what I need to do for making my photos looking their best. I used a polarizing lens on my manual 35mm camera 30 years ago but that is too much water under the bridge for me to remember what the process was.

Also my Garmin VivoSmart3 is now starting to irritate me (nice way of saying it) by vibrating and telling me to "MOVE" ... right after I spend 30 minutes outside walking around, talking to the hounds and checking mail.