Some Rambling To Close The Day 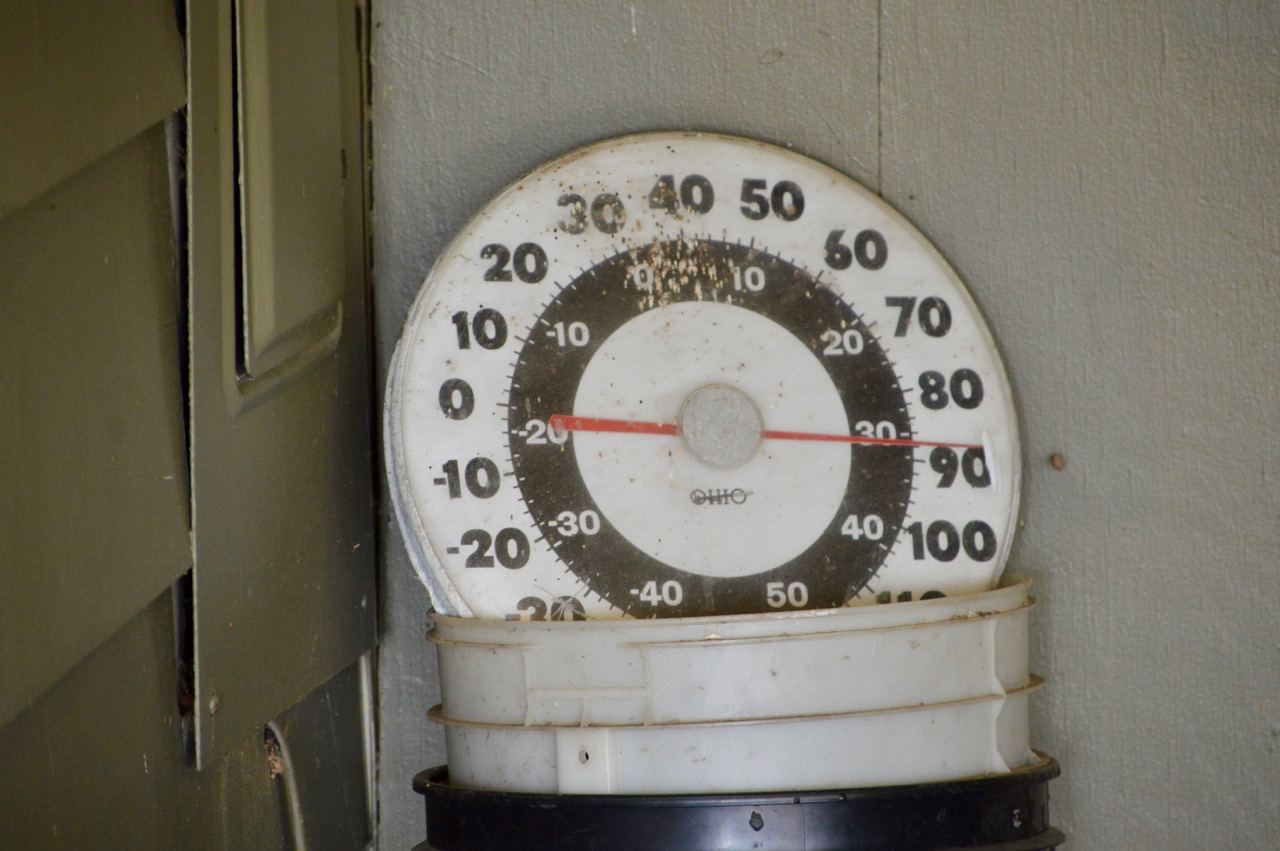 After removing the old thermometer from the wall in the carport a year or so ago, due to swallows building their nest there and then crapping all over my cars ... it's been sitting in the corner giving accurate information while I decide where to put it next. I'm thinking of mounting it on the wall it leans against, yet that is in the corner and would that be a few degrees warmer?

Anymore it's pretty rare that I take the camera with me on the late afternoon walks or the final walk of the day in the early evening. It is a much better time to take photos though due to the light. Sadie kept staring at me for the past two hours, then lying back down when I told her we had to wait for it to get cooler outside. All of us tried our best to sleep the afternoon away so by 5:15pm we were ready to turn on the day again. 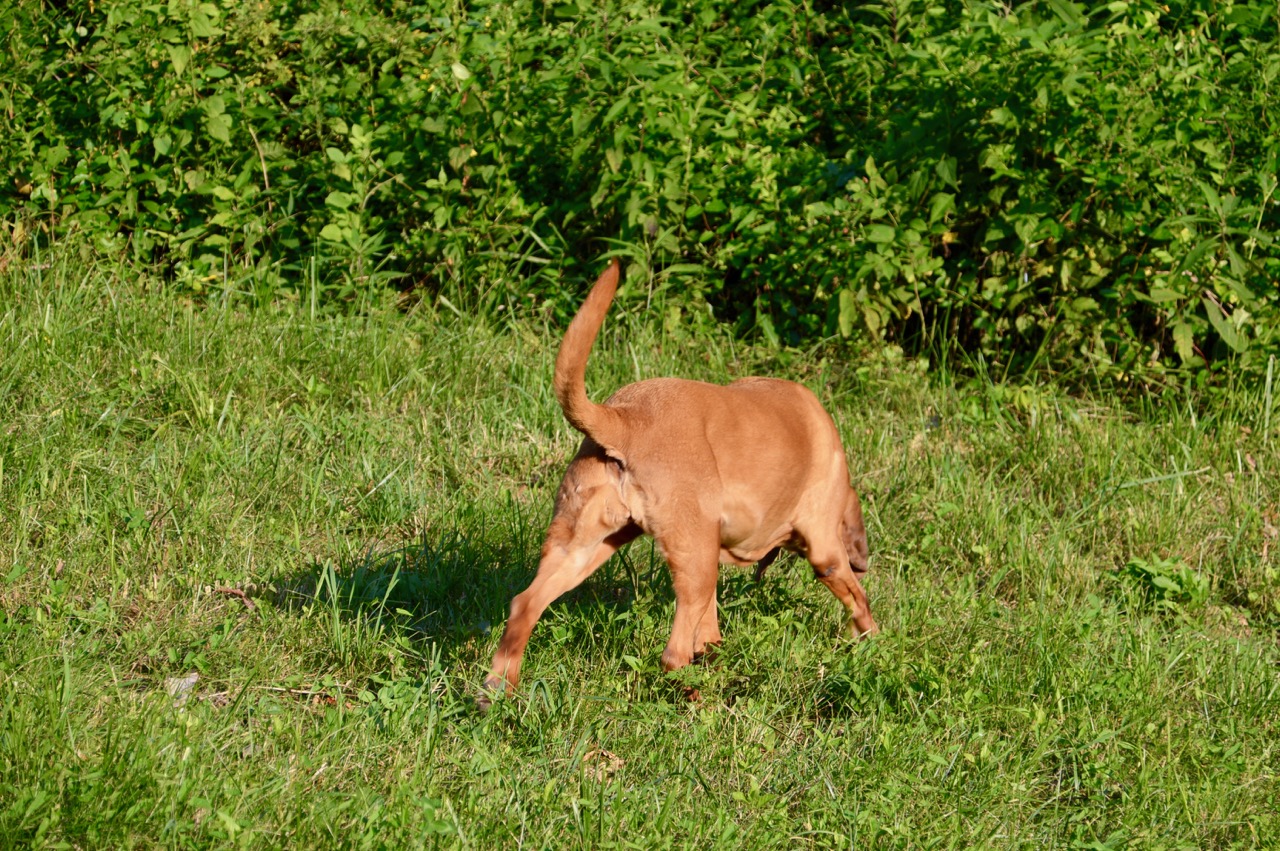 I think you will see a better quality of picture this time of day, a little after 7pm. I got to the point of wanting to go outside. It looked hot based on the temps my iPhone app was showing me but with some wind it might be okay. I remembered the other day that after 7pm it wasn't bad even with a temperature of 88°.

With the small worn path leading into an opening that is surround by solid growth, I'm thinking this is one of the ways the deer go to and from the woods into the field. In the past years I have seen up to ten deer at once standing by the edge of this location, until they sense me pointing the camera at them ... then they all sprint back into the woods. 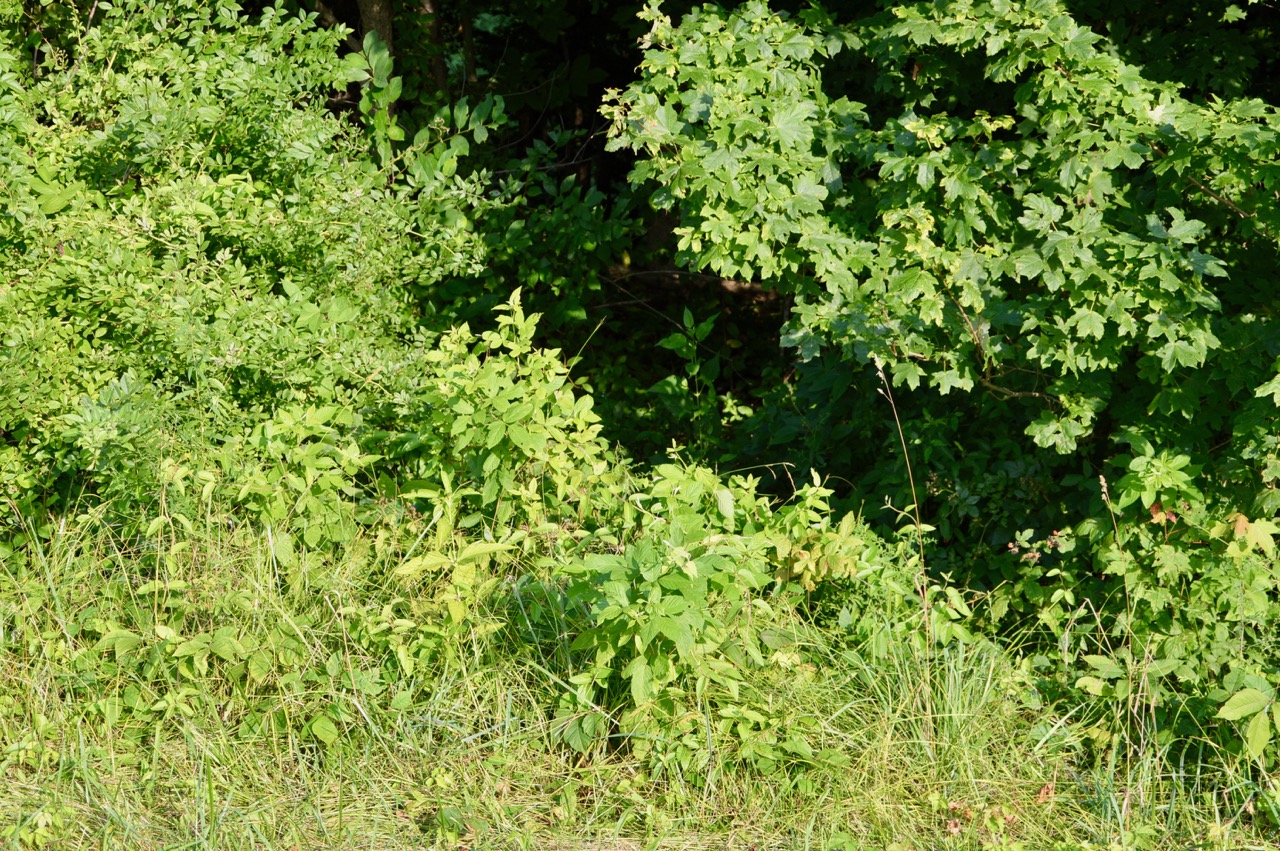 Stella must be feeling like her old self today. More energy, showing a little more activity inside the house. Then tonight she slowly drifted away from me and Sadie towards the woods behind the neighbors house as if I did not see her. She didn't turn our direction until she heard my tone of voice change ... she must have thought I was getting serious.  LOL 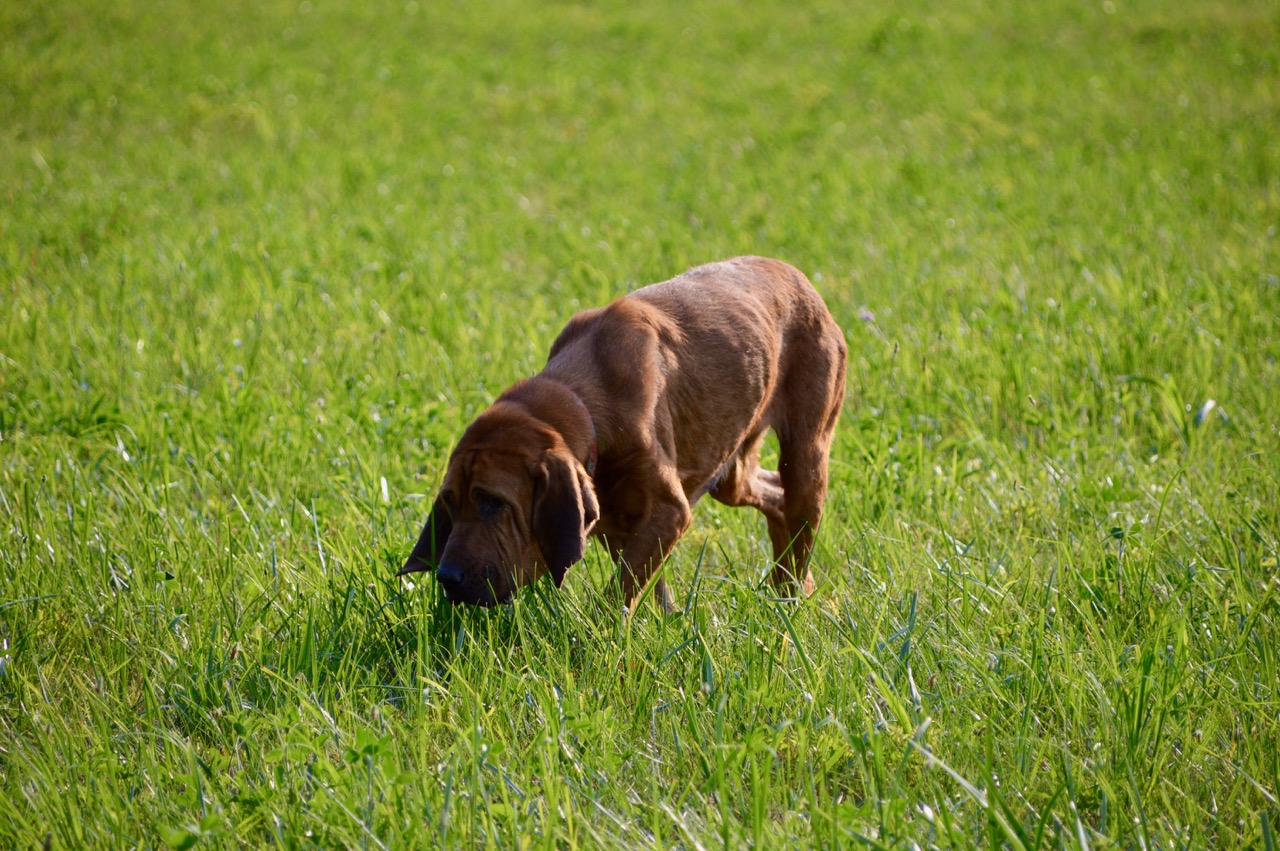 This time of day I have caught deer standing in that grassy area at the edge of the woods. While I scanned the horizon for any possible deer, Sadie was looking the opposite direction. If I wasn't mistaken my nose was picking up some very good grilling going on at one of my neighbors. I can't imagine what her nose was telling her. 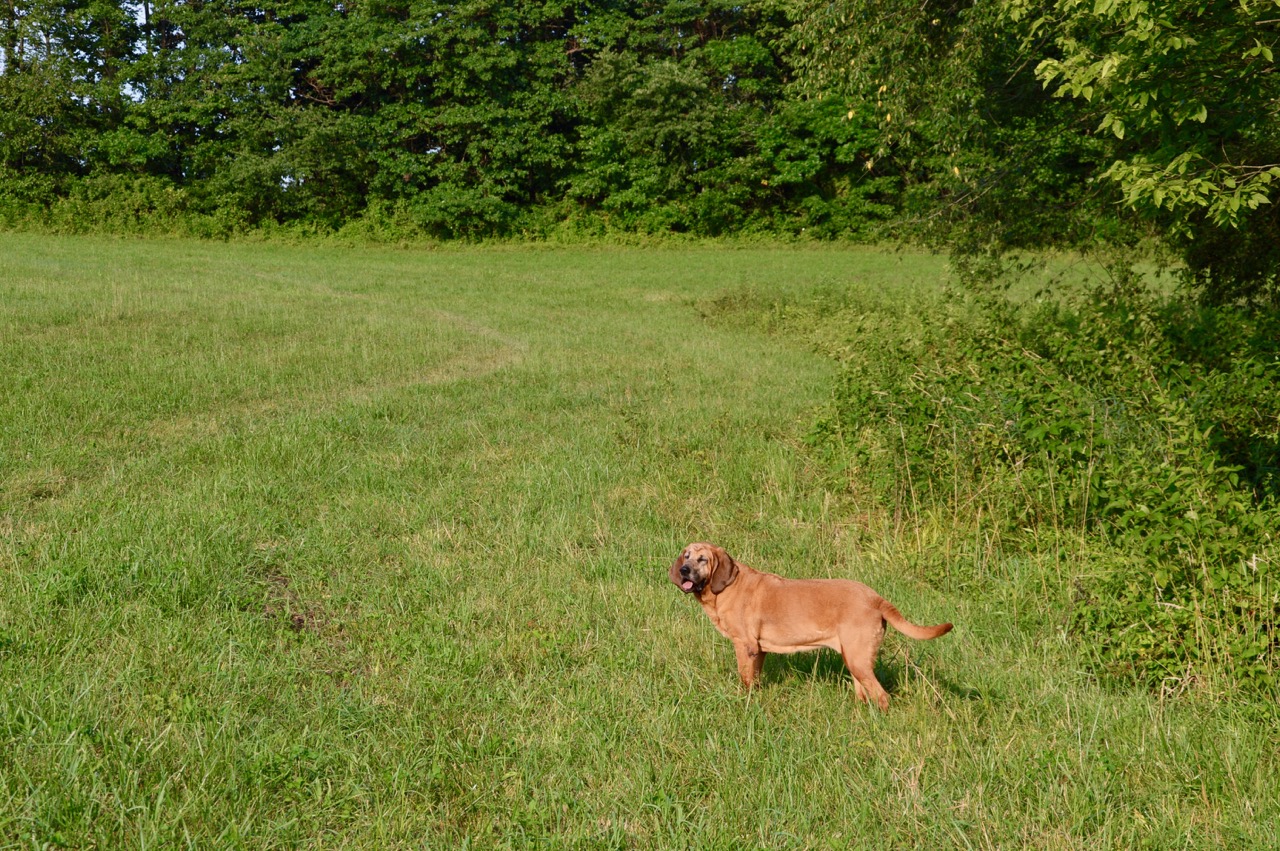 Just like this morning Stella trotted right past me to catch up with Sadie. I can't remember the last time she trotted 3-4 different times in one day. The norm for her in these afternoon walks is to walk as slow as possible with her tail and head lowered, like she is taking her last steps. 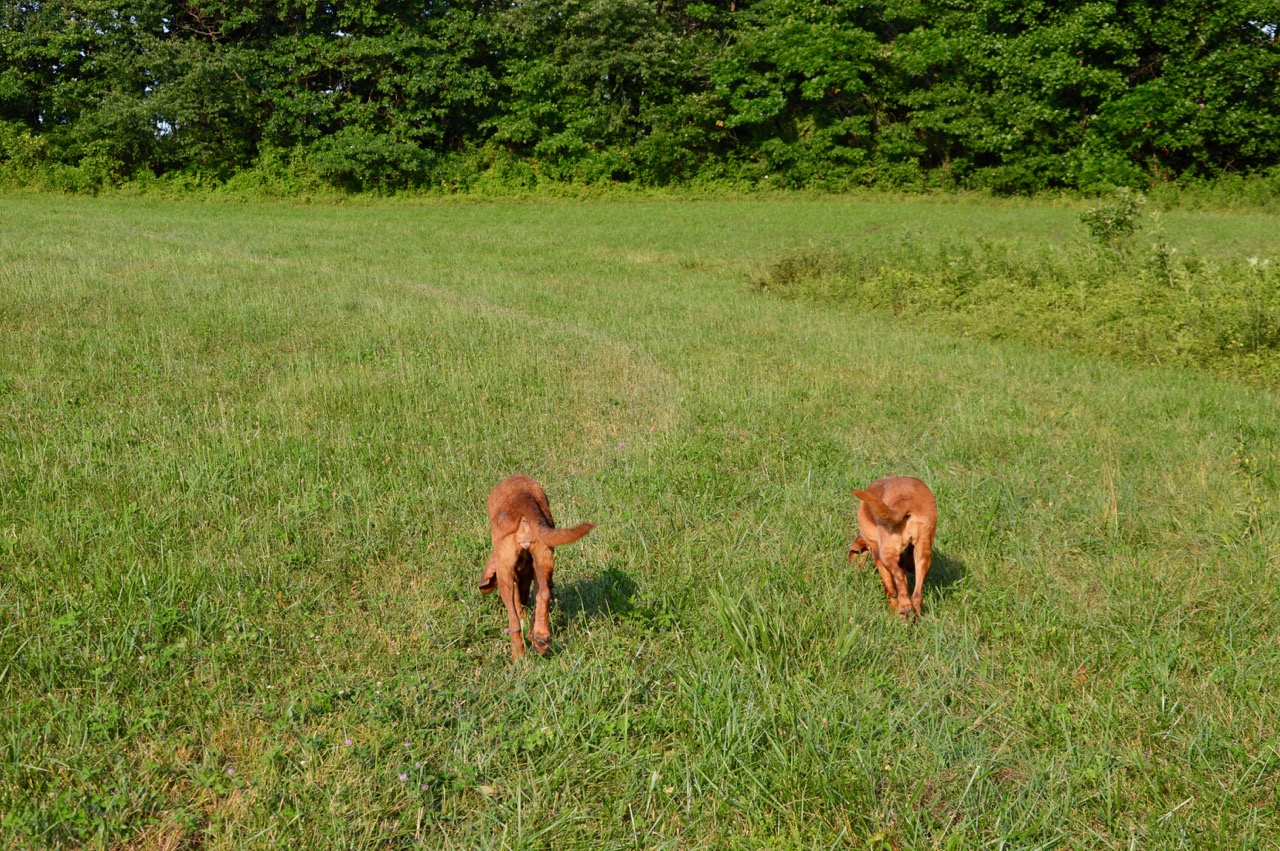 You can barely see it but the leaves of this tree are starting to turn bright red and bright yellow like it does during the heat of the summer. I'm too lazy to look up what kind of tree it is. 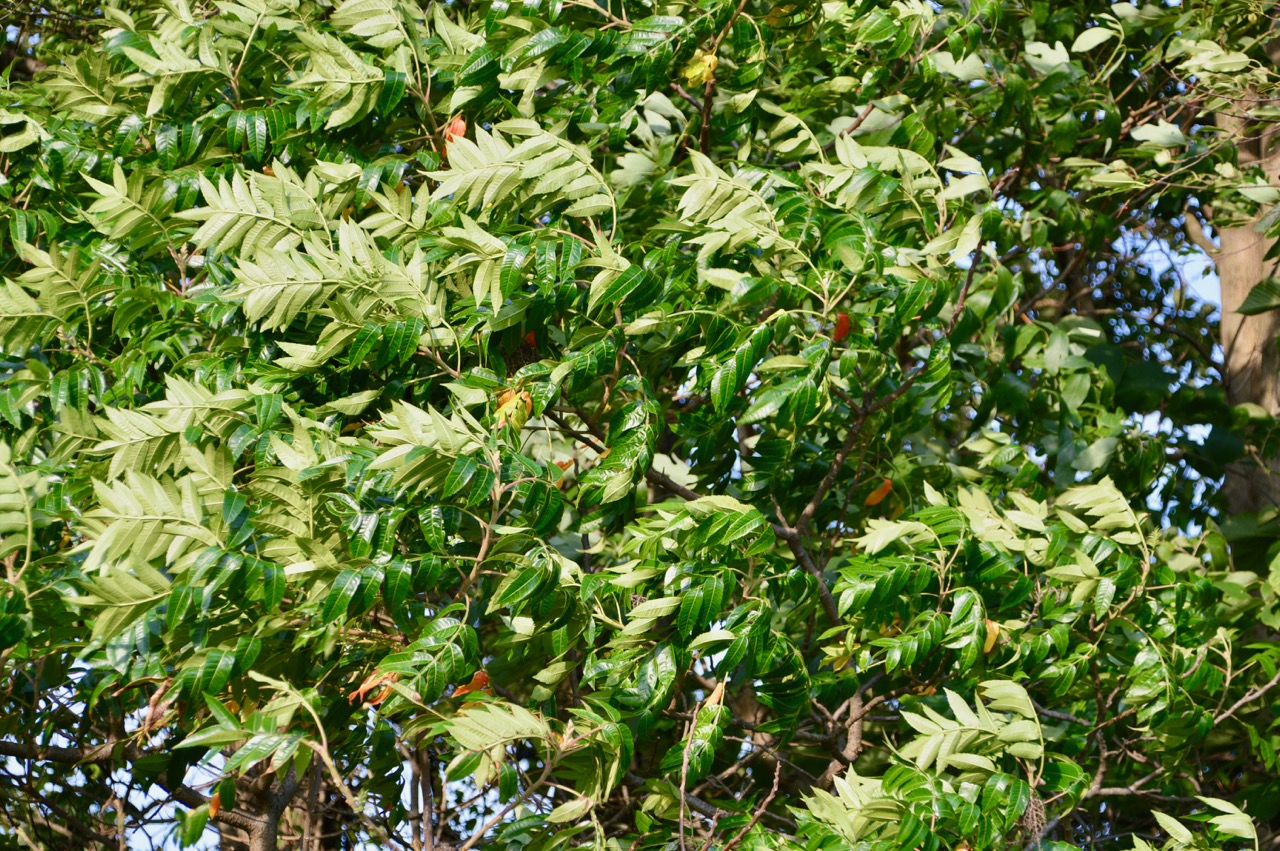 With 16mph winds, that didn't keep Sadie from doing her normal investigating work. 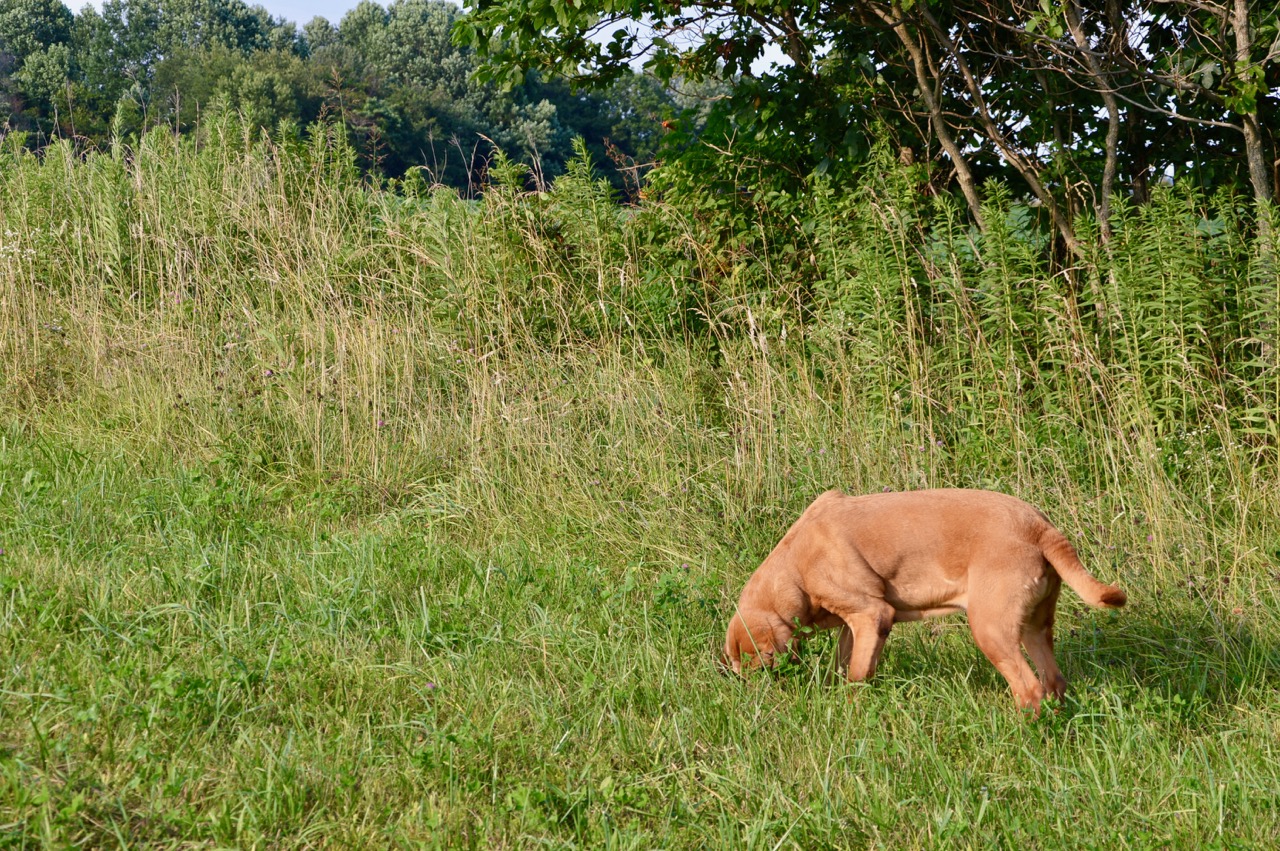 Nor did it keep Stella from following her own path on her own schedule. 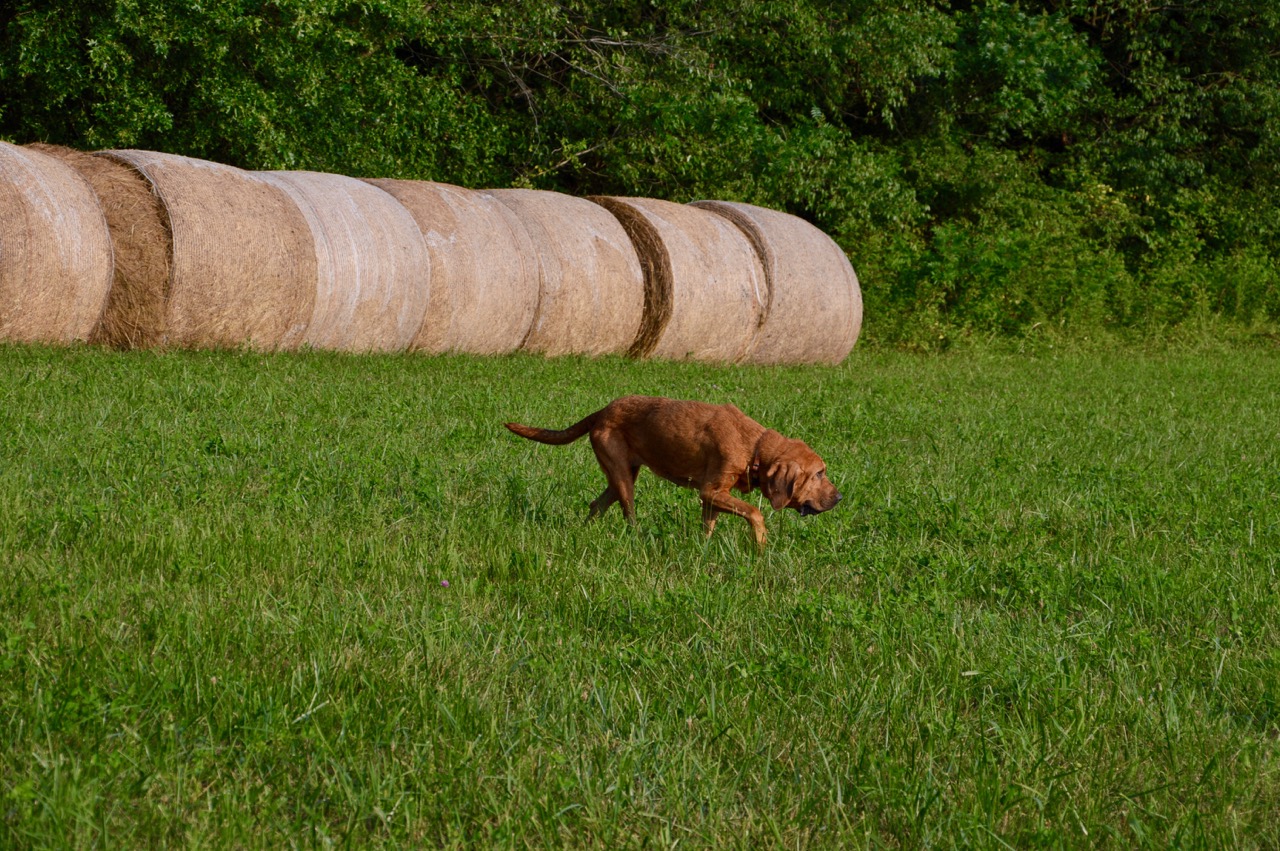 Once Sadie and I had walked quite a way on the path I turned to see where Stella was and there she was trotting again ... good to see. 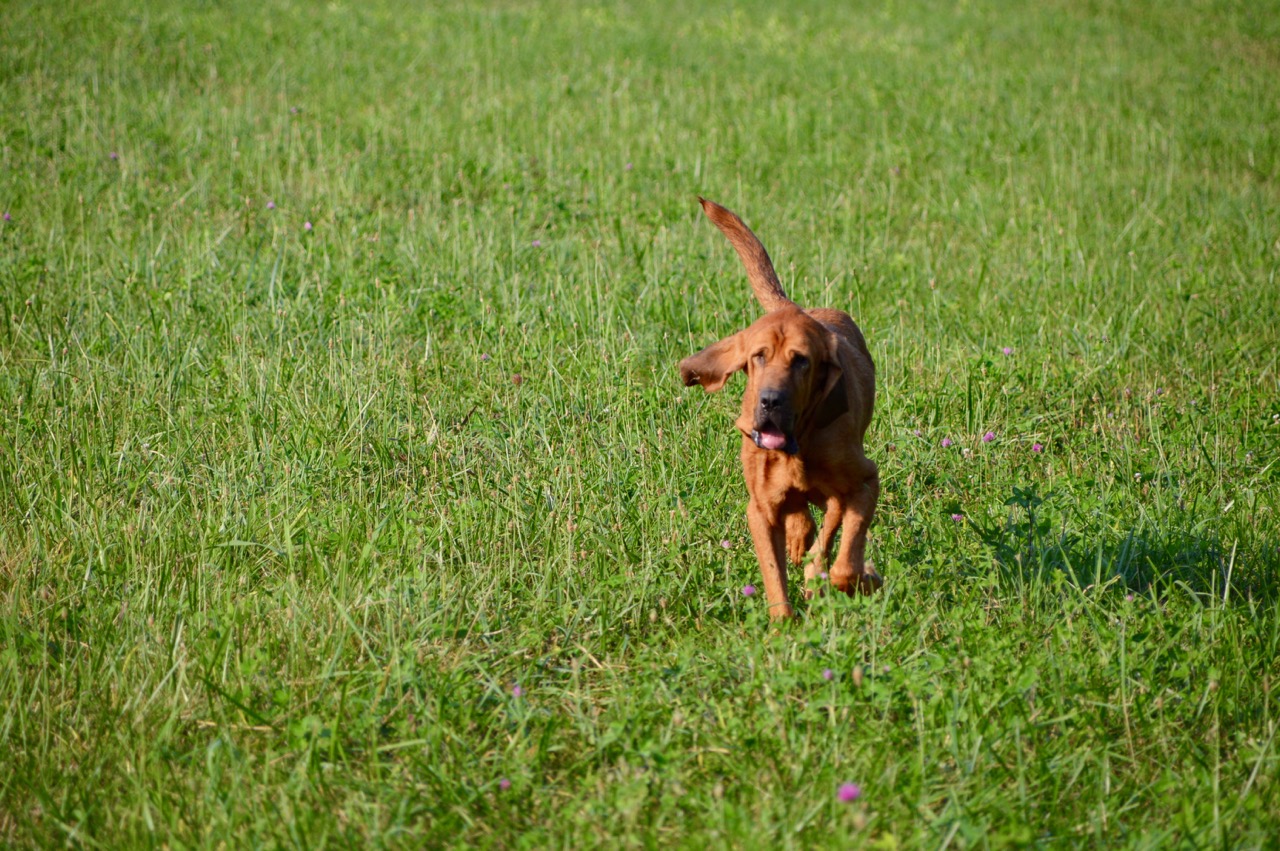 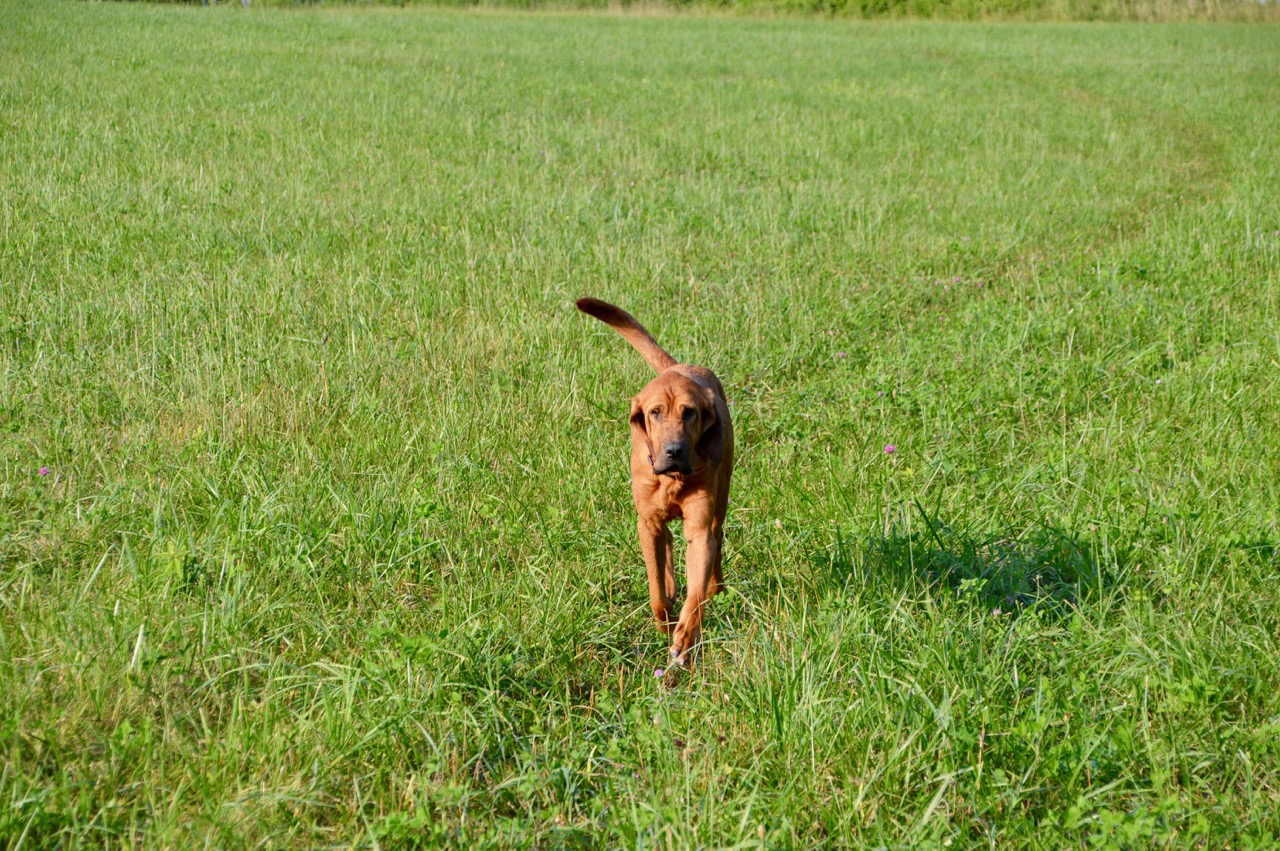 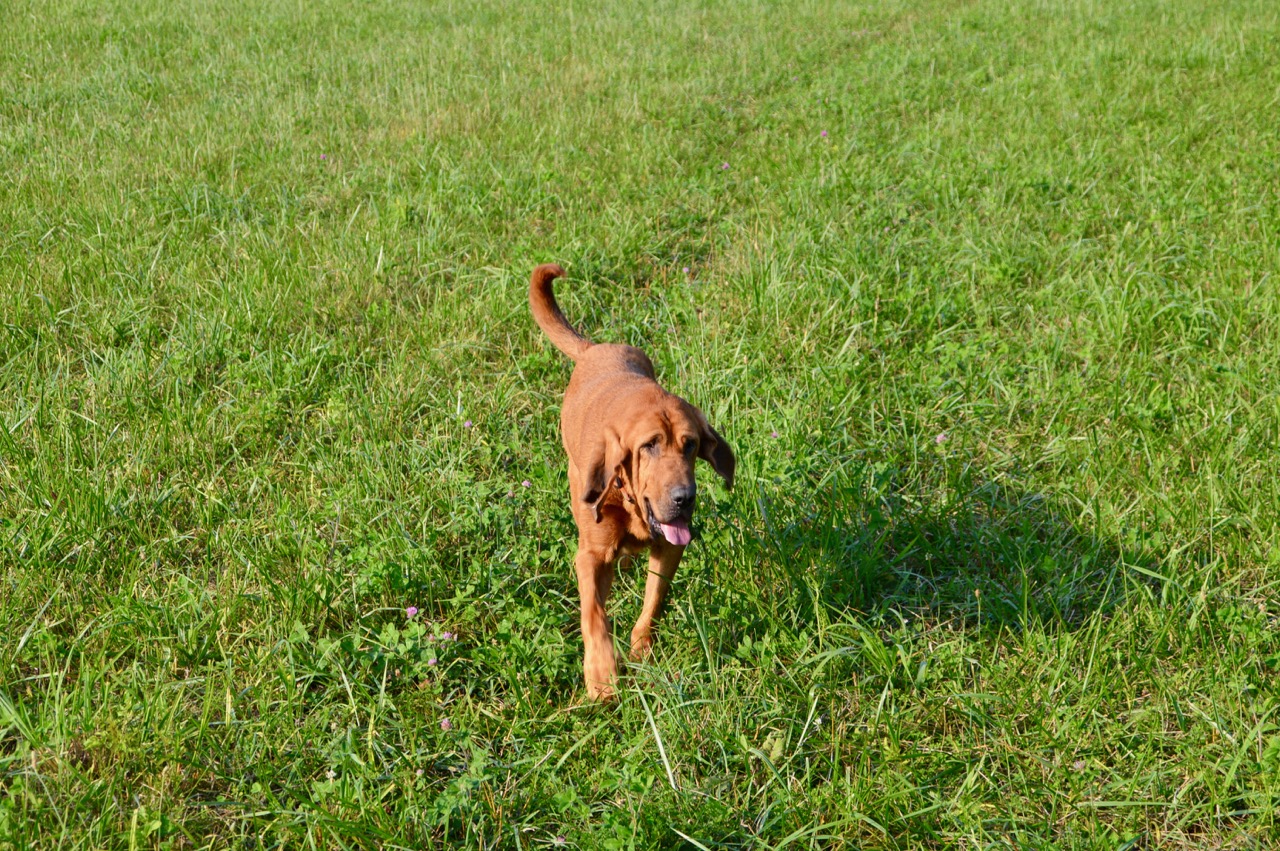 It never felt hot on this walk. I never felt a drop of sweat, so I decided when I got back I'd pull up my chair to 'Winston's patio', grab a glass of ice tea and enjoy the good weather. I still had a couple of hours of sunlight left. It was prime time to see any possible deer stepping out of the woods or I might even get lucky enough to see my backyard grass move as moles charged through it gobbling up all the grub worms under the grass surface. They have been relentless this month. 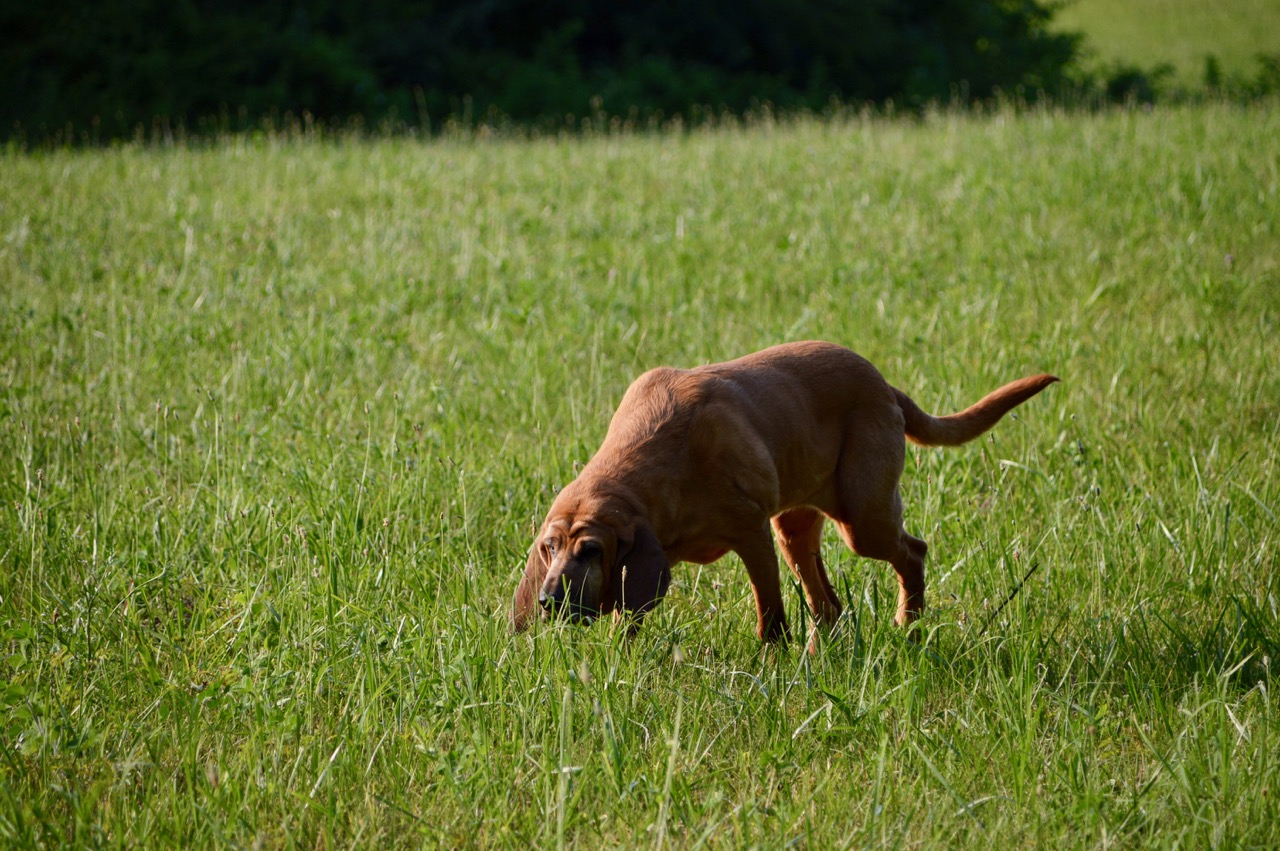 For those that wonder, yes I have thought about digging out some of the yard in back of the house and installing a nice stone patio, instead of being satisfied with just 6 red blocks. With all the underground water in that field that angles down toward my yard I have a huge problem with something I call 'ground surge'.

Of course one of the nice things about installing a bigger patio is that I would have to build a short retaining wall around it to keep the ground from covering the patio every year. Even then that surging ground would attempt to come up from under any installed stones like it does now to my river rock, mulch and those 6 blocks. 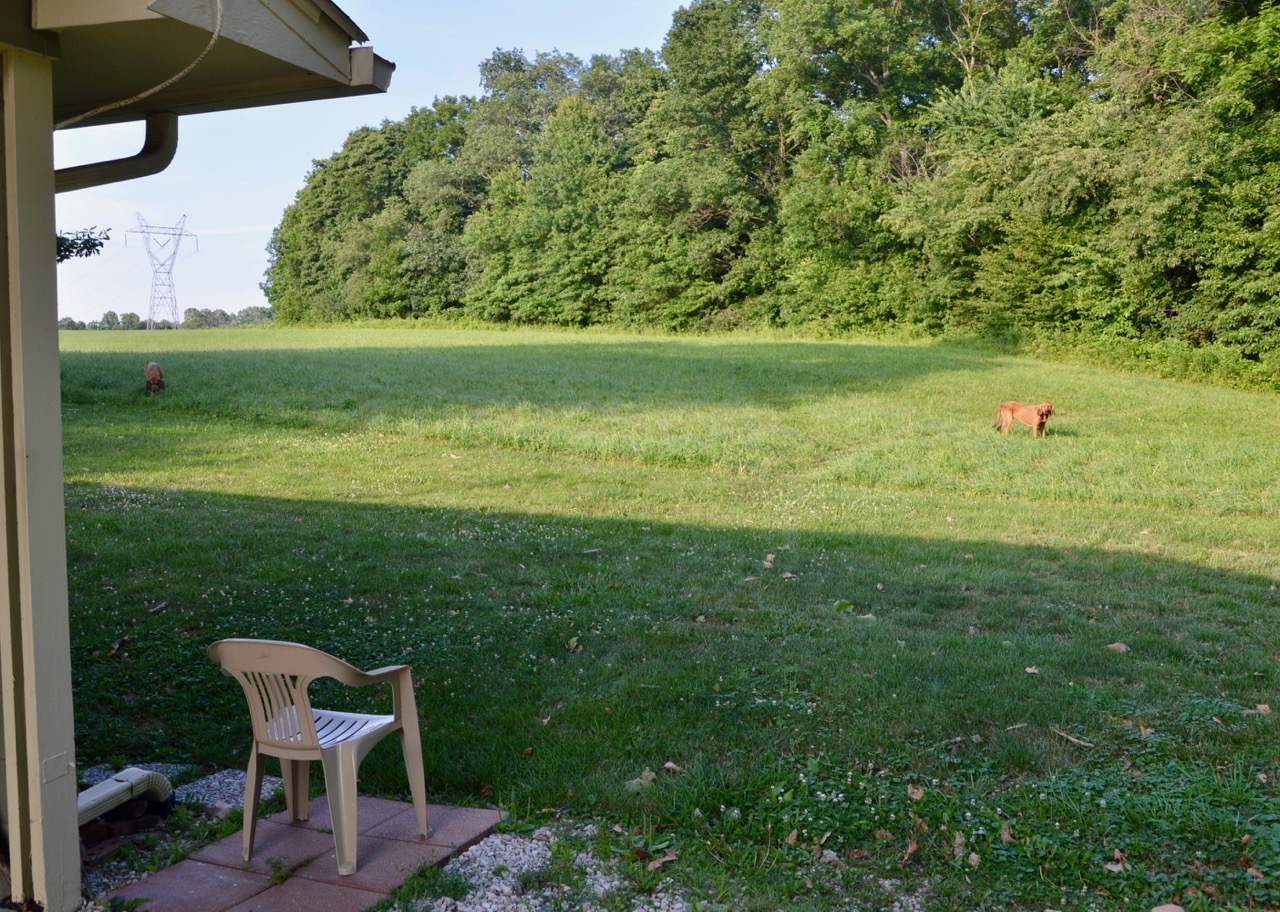 I originally put those blocks there because it always flooded there after heavy rains. Every year I'd add more dirt, then more stone on top of it, every spring it would flood out again. Sometimes the water would come from an overflowing gutter right above it.

Once Winston found out just how nice it felt when the sun had shined on it all day, he use to lie on those blocks while scanning the field. I guess the heated stones might have made his back or legs feel better as he got older. So it became known as 'Winston's Patio'.

All of these next photos are taken from me sitting in that chair. Of course after a walk and warmed up again both hounds wanted to sit right next to me. They really wanted to go back inside the air conditioned house. 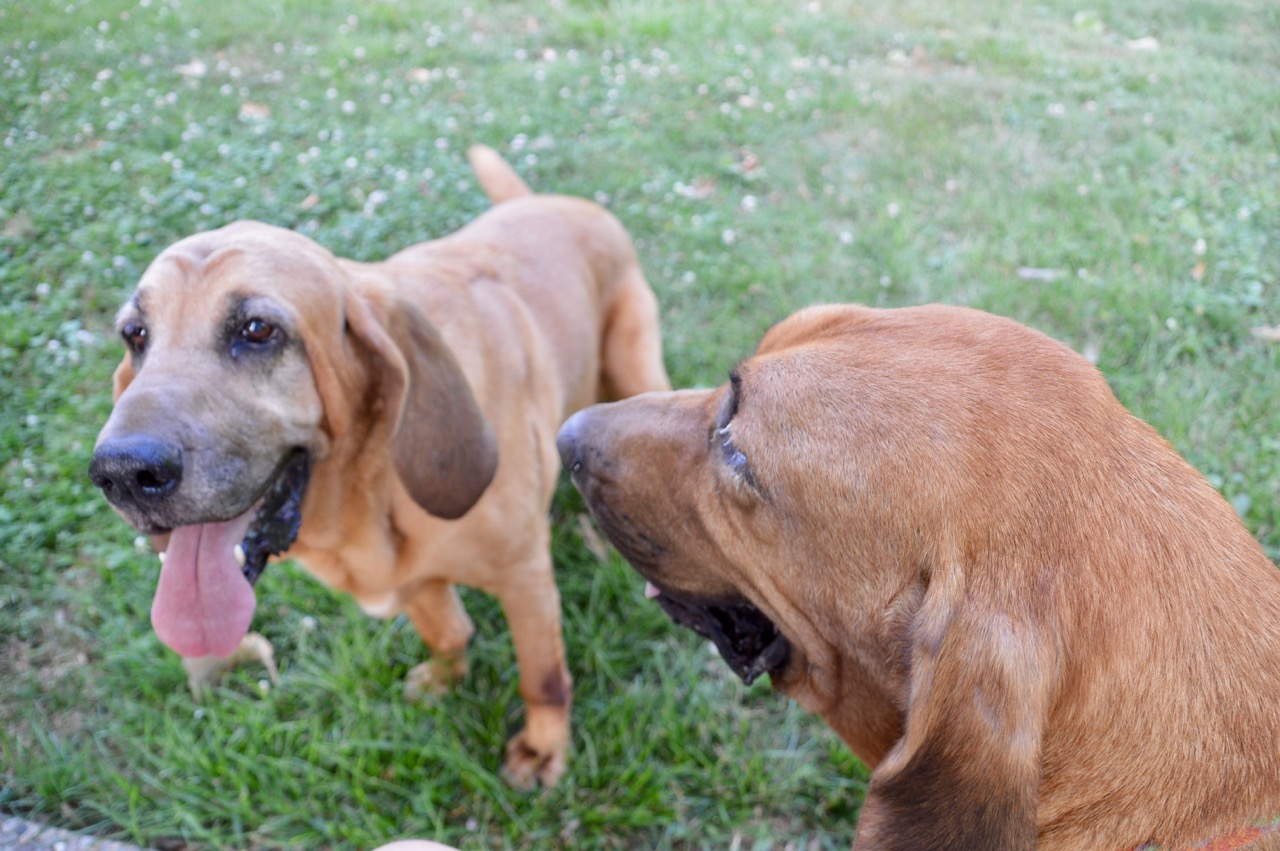 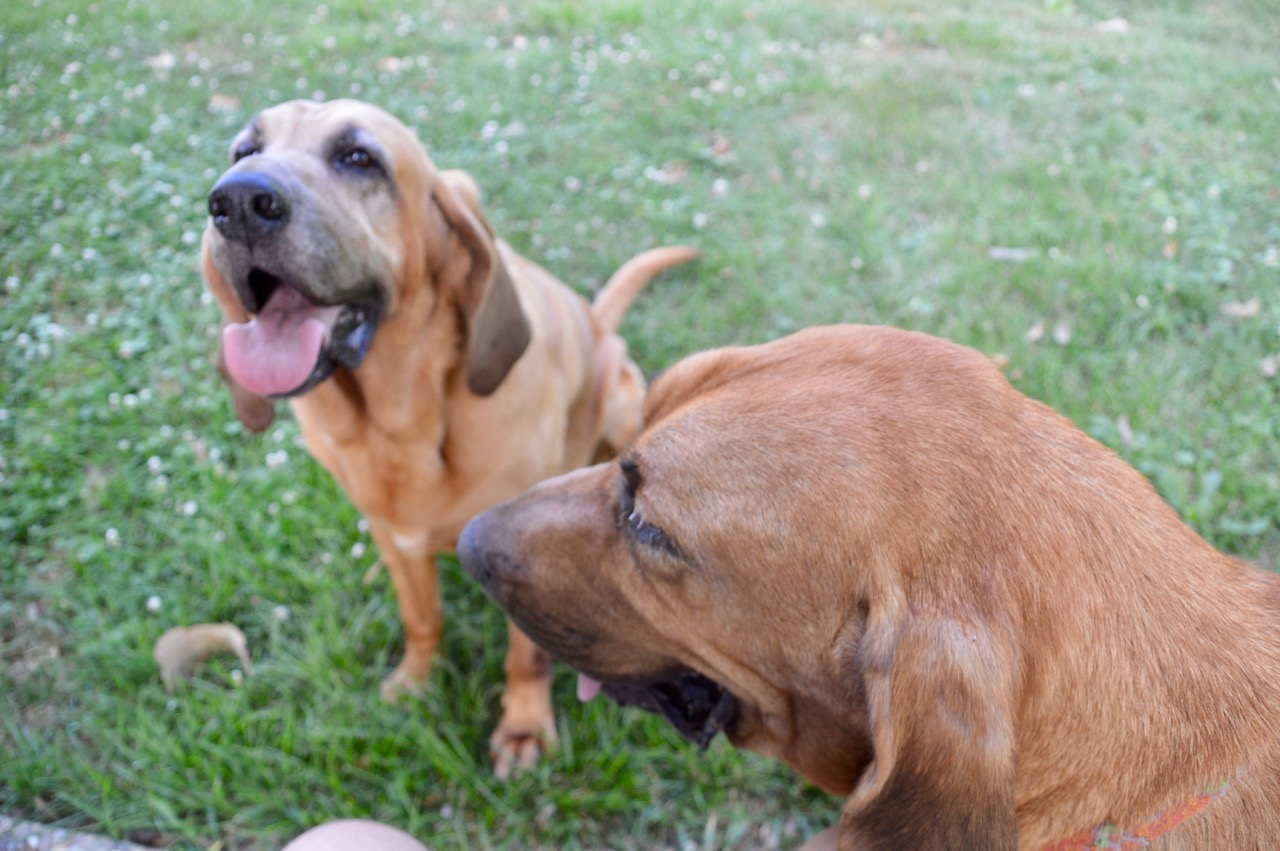 Here is my viewpoint from the chair. After about an hour of sitting outside, no deer were seen and the hounds had had enough ... 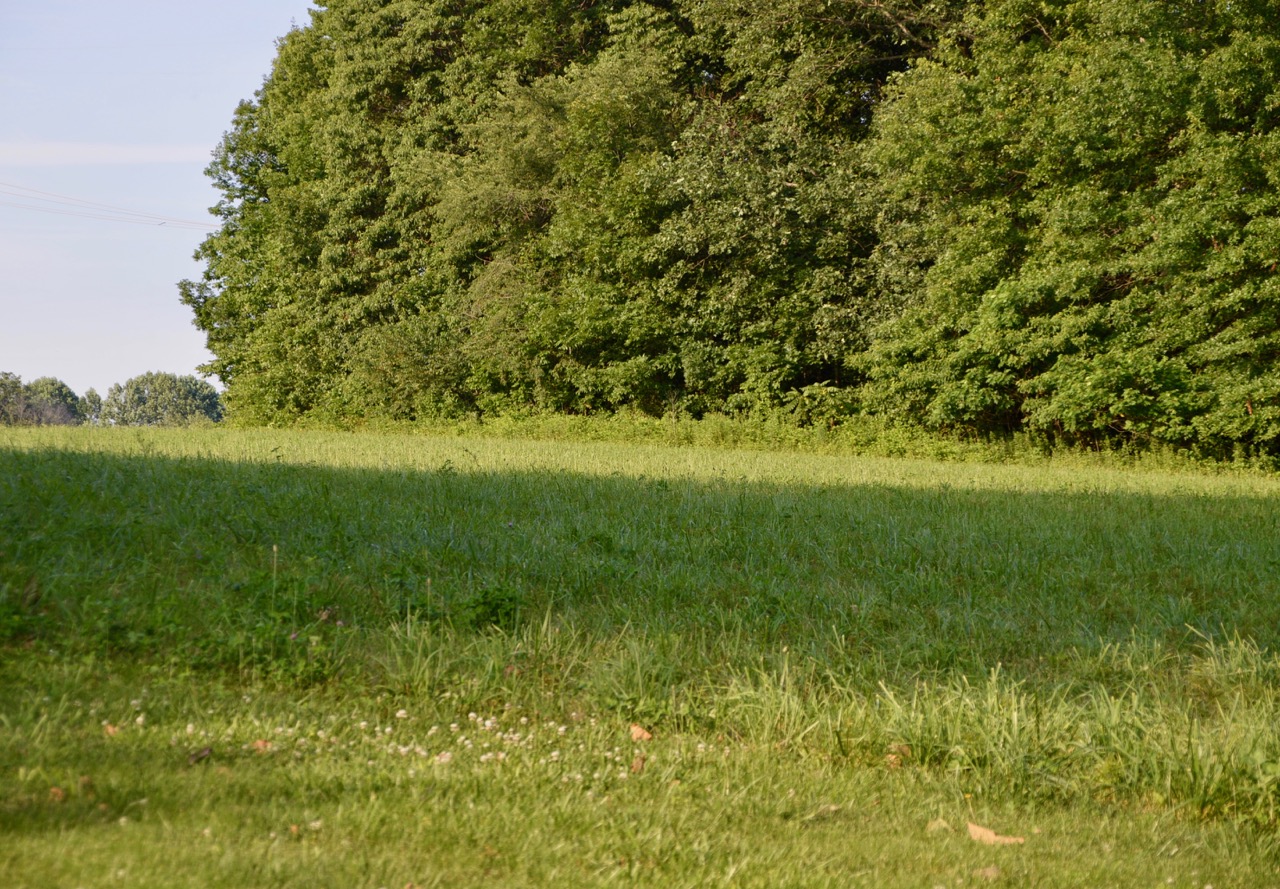 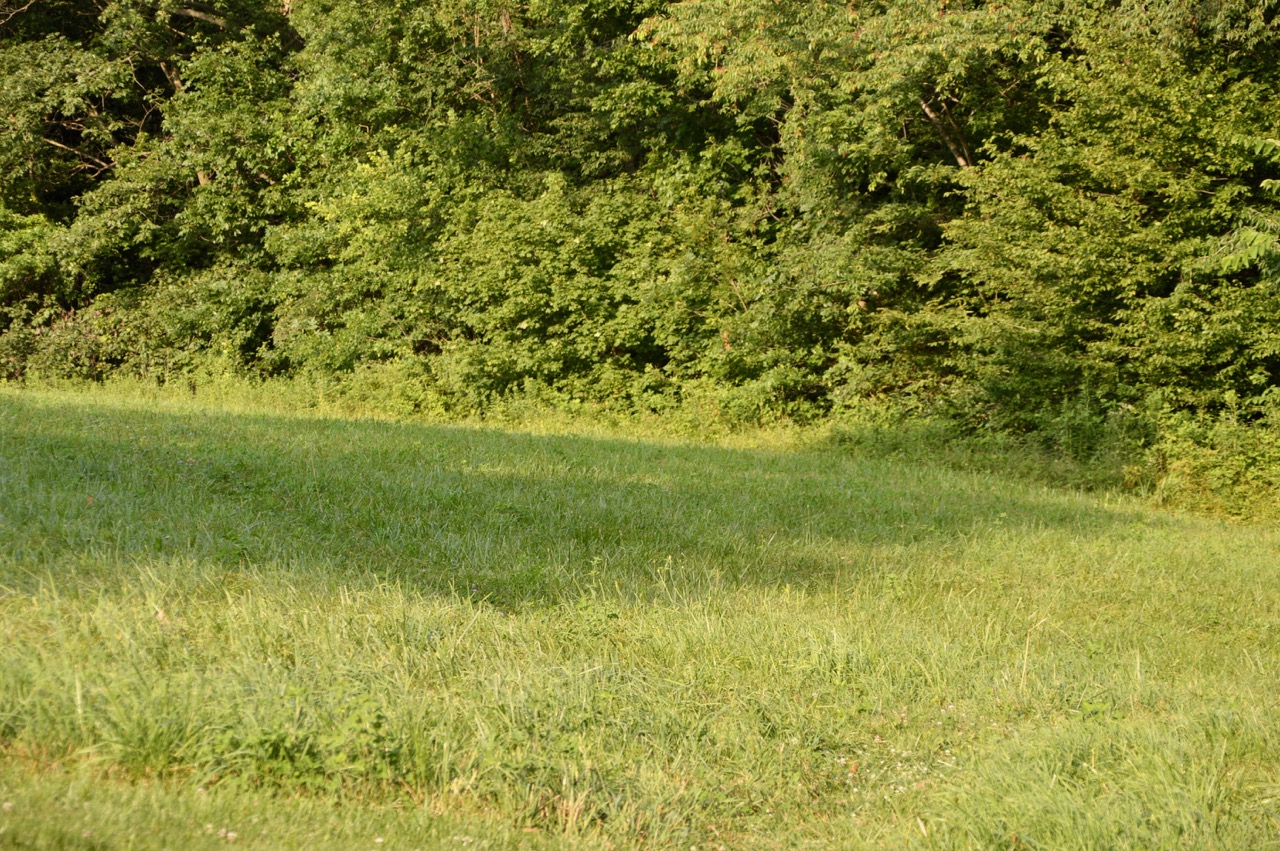 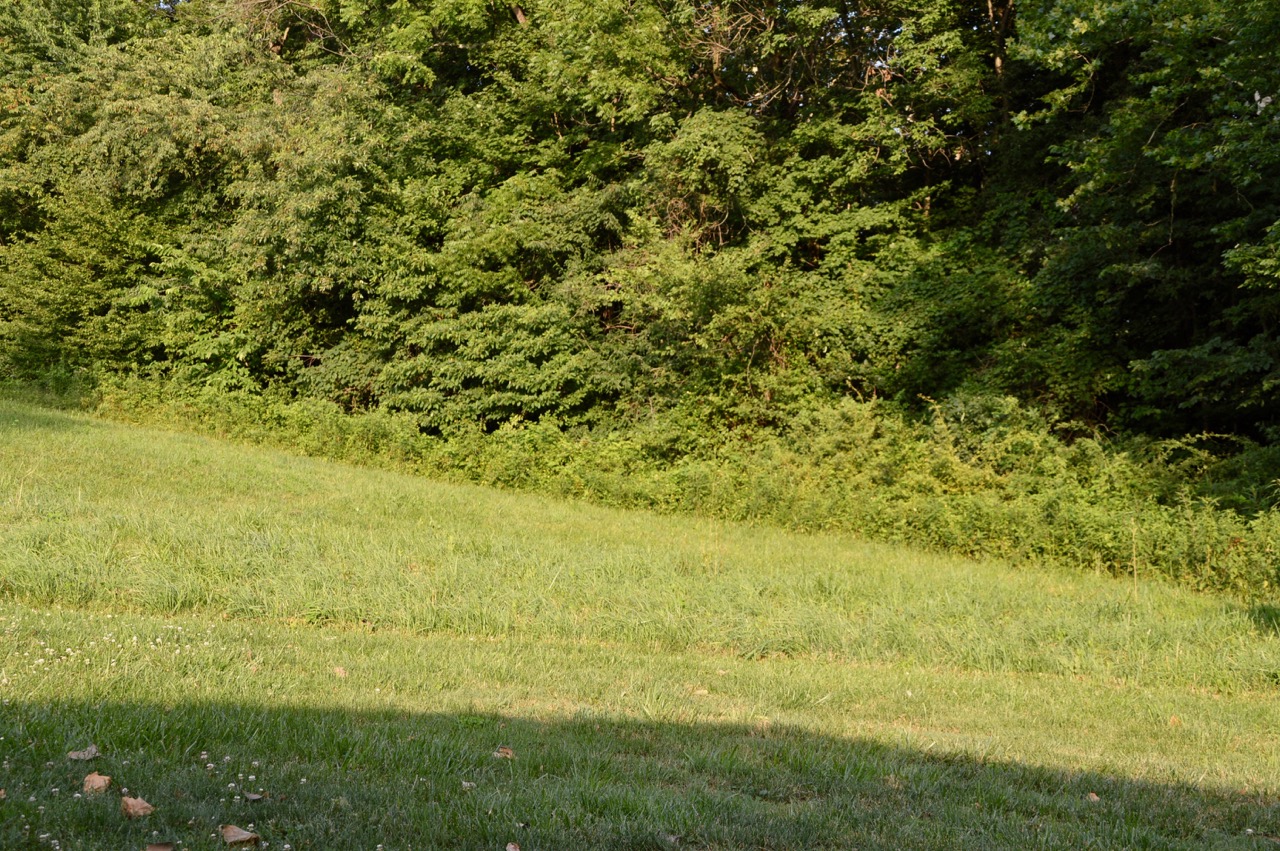 Just about the time I was stepping into the yard on the walk, with both hounds way behind me interested in other things, a rabbit sprinted across the yard from the north and leaped into the tall ragweed that hides my burn pile. The hounds didn't know just how close they were, they never saw the rabbit. 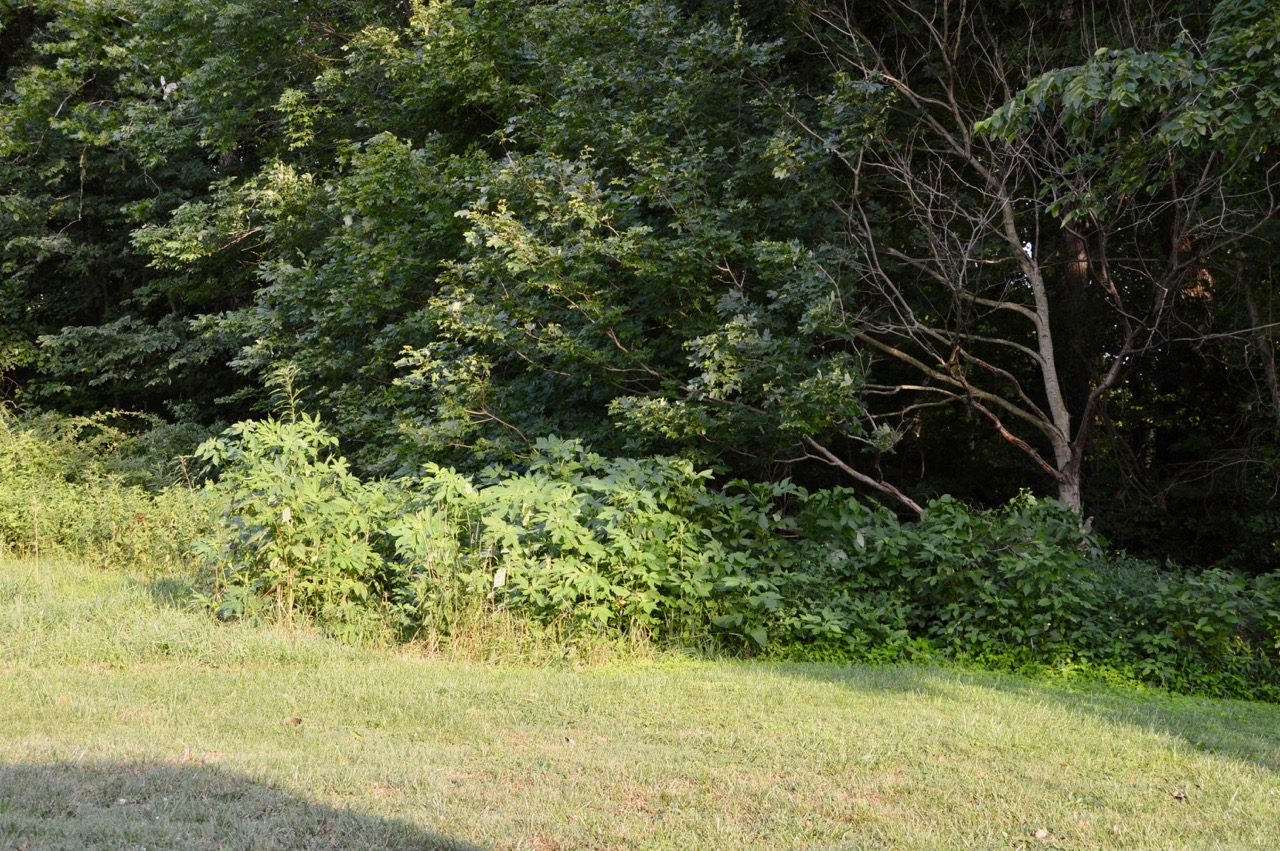 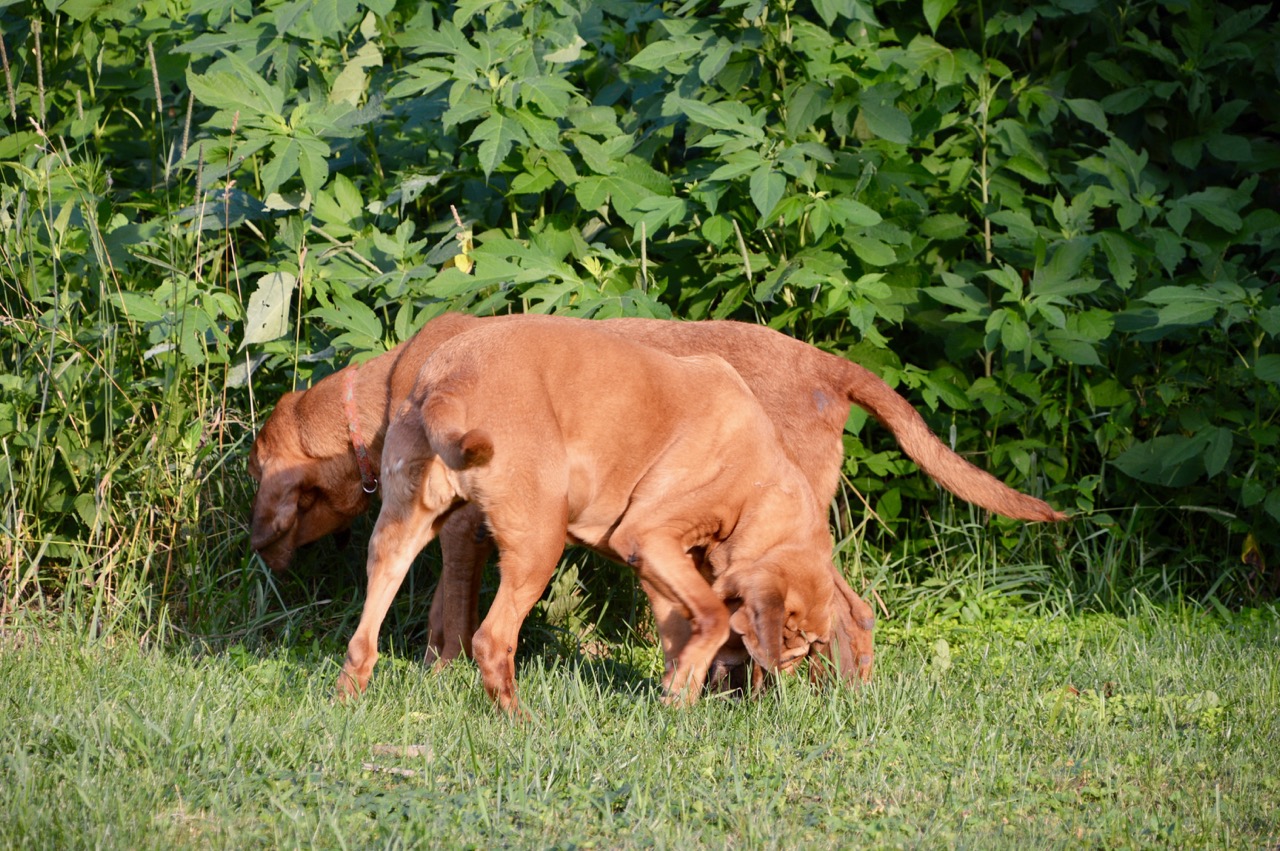 Stella still thinks the best tasting green grass is inside all of the ragweed. It doesn't matter that 7 acres of grass are starting to grow again, this is her favorite spot to find grass to eat. 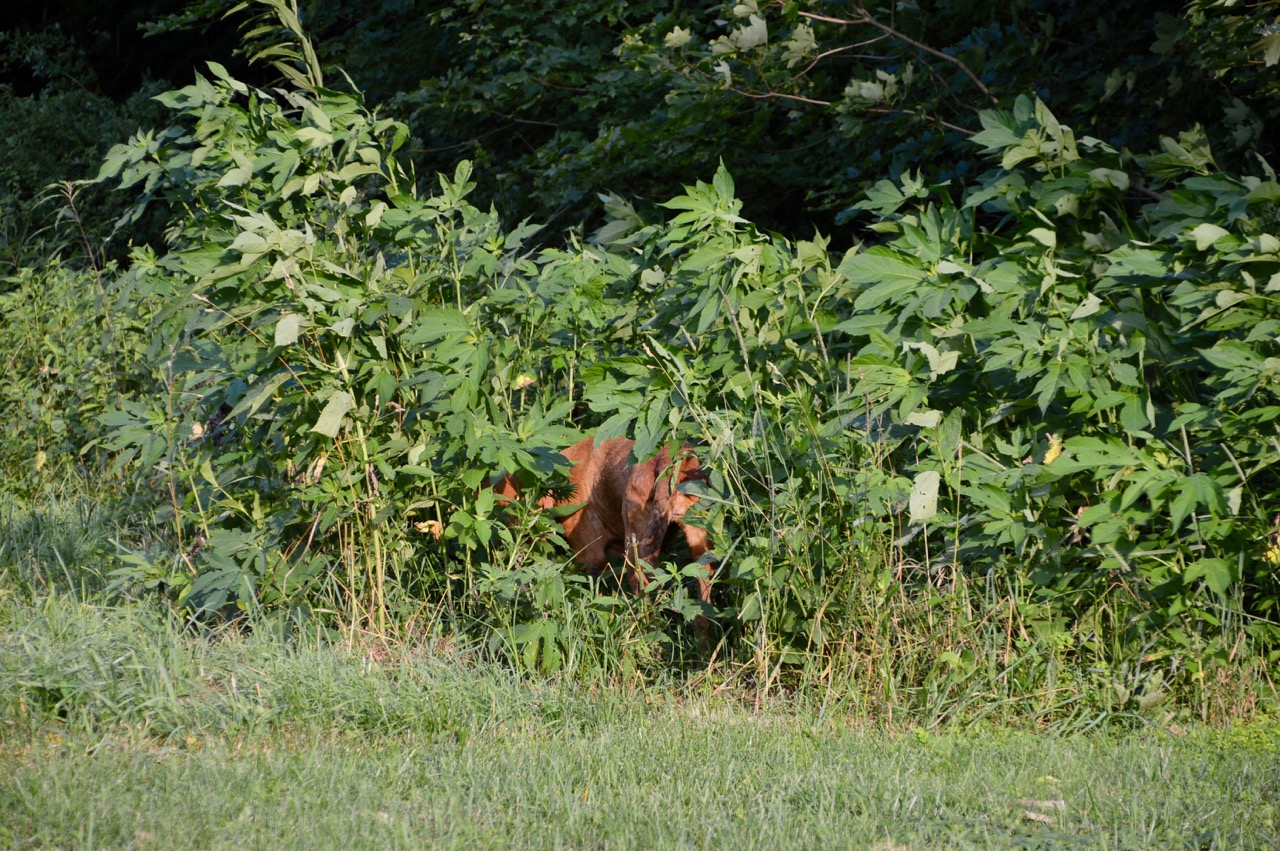 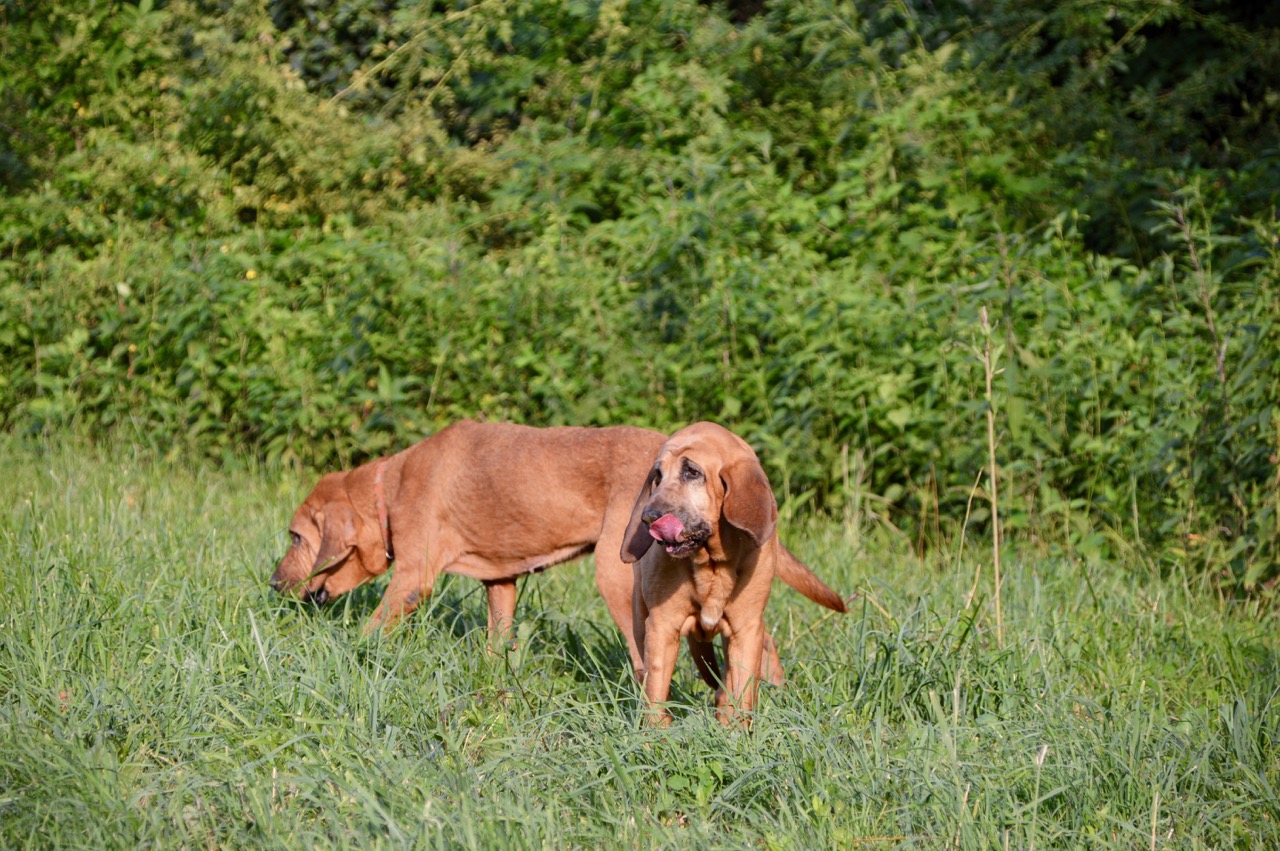 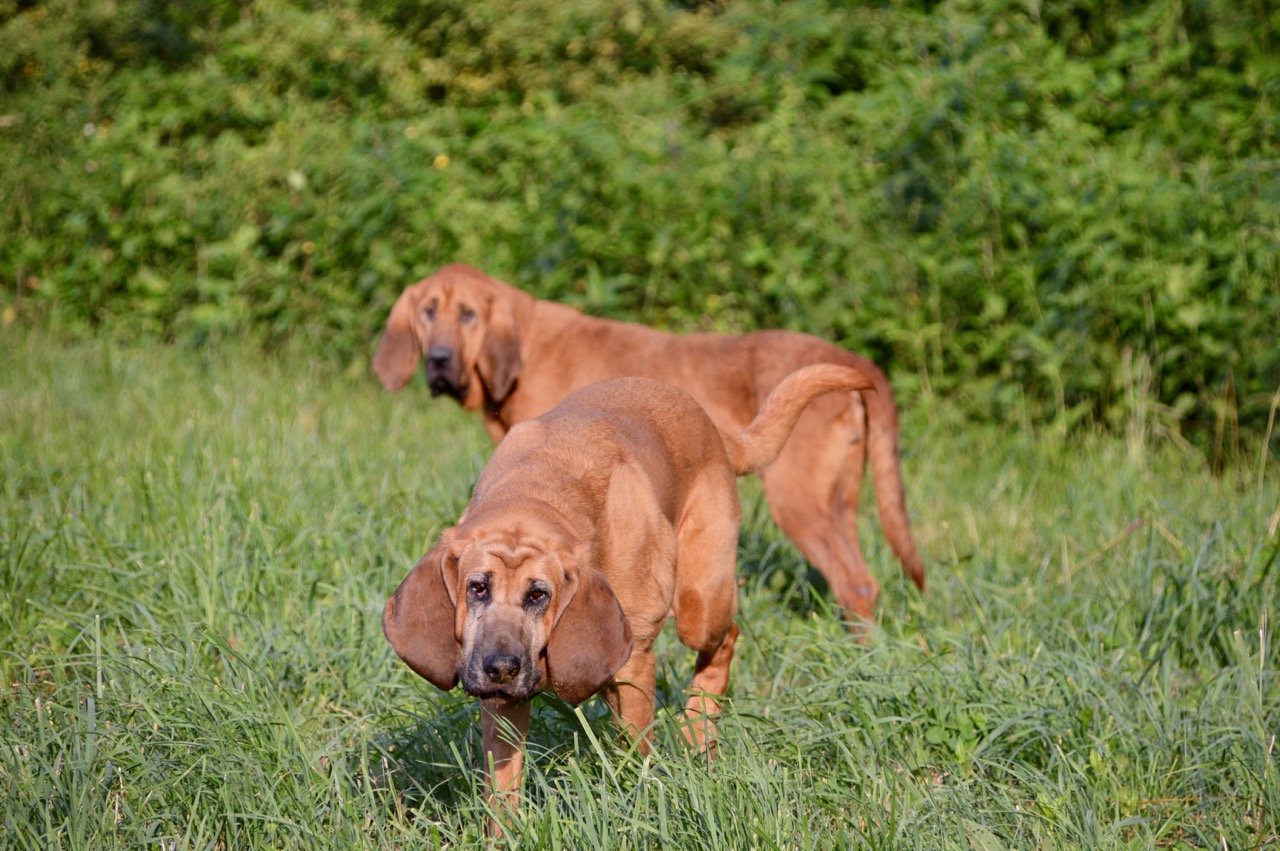 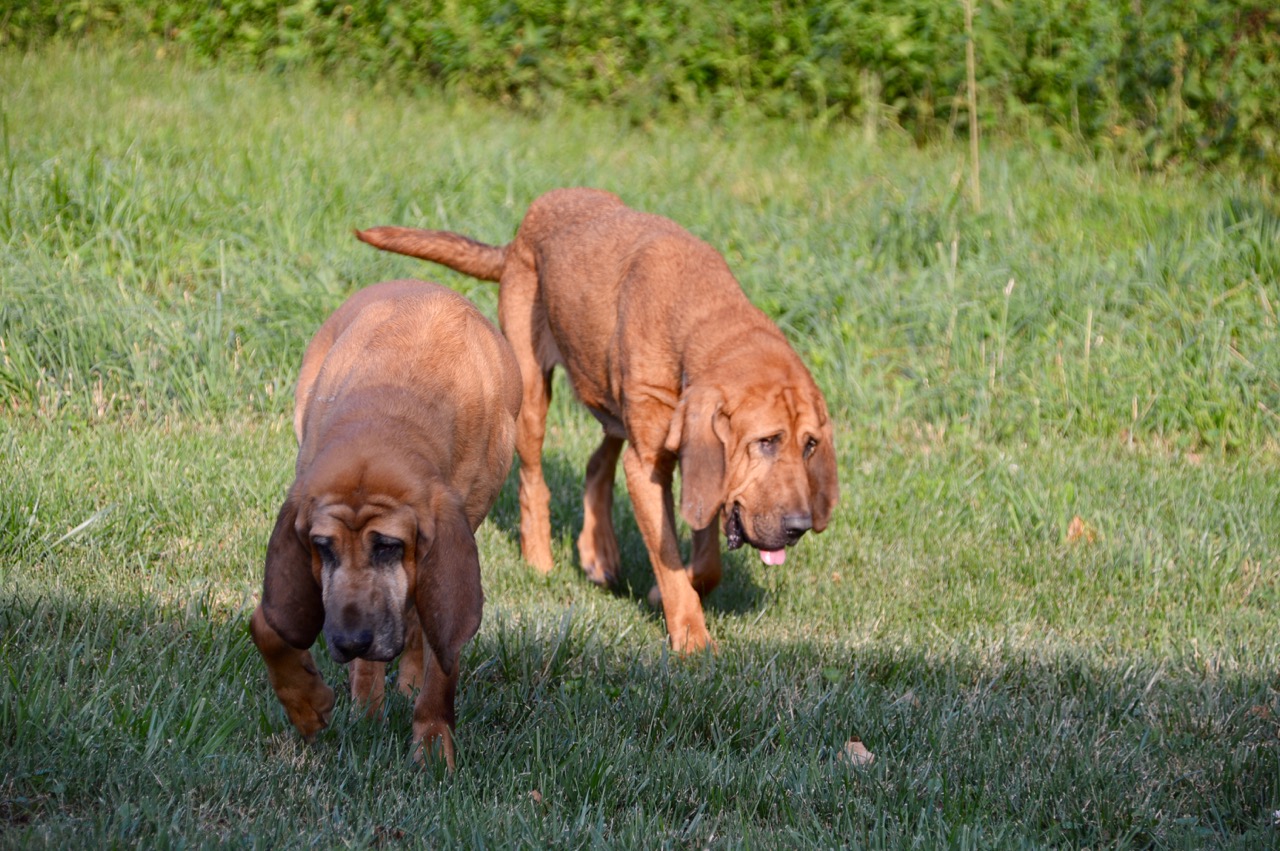 Although I wasn't that hot, it was great to open the door and get hit in the face with a rush of cold air. Air conditioning is a great invention.

With about 5 hours to go before my billing cycle ends with HughesNet, I had about 800Mb of data left. I found out a few days ago that YouTube videos, videos from the sports sights soak up a lot of data, like over a gig's worth in a short period of time. But with some data left I thought I'd take a look at Firefox again, get their update and see if websites loaded any faster. I like their online security programs that run in the background but it's always too slow for me.

After an hour of using it I think I'll give it another try full-time and make it my default browser for a while. Their download speed isn't bad.

A might be a movie night tonight. Reds games are on hold with the All-Star Game tomorrow. I am not in the glitz of entertainment for their home run derby tonight. I hate how they have made all televised sports more about entertainment than just the game. They are all competing for the next best show in all sports.

I had another friend tell me last night that if I really do move out to the southwest like I have talked about, I should keep the house here in 'the tropics', and then rent a place out there to see if I can handle all the brown sand, the lack of trees before selling my house. He and his wife think I'm crazy to even think about leaving the location I am in now, even with cold winters. They cannot comprehend all the green trees, grass and fields I have around me.

No moves are planned as long as I have the hounds. This is the perfect place for them.

I mentioned the app Pocket the other day for Google Chrome where you can download websites into Pocket and read them later offline, no internet needed. That feature is already built into the Safari browser that Apple designs. I see that in Firefox it's already added.

I have not used it offline but what I do like about it is once you sign up for an account (free), they email you "Pocket Hits" ... they group interesting articles from media around the world.

For example one of the articles on this afternoon's email was titled "I kicked my smartphone addiction by retraining my brain to enjoy being bored" ... by Jordan Rsenfield at Quartz.

or "What happened when Walmart left" by Ed Pilkington at The Guardian.

Well I am going to try to sneak out of my desk chair and check out the movie selections. I'll have to move slowly since Stella has decided to use the arms and wheel under my chair as her pillow as she sleeps.

Monday flew by here in 'the tropics' of Southern Indiana today.
at July 10, 2017