Only iPhone 6s Photos This Morning 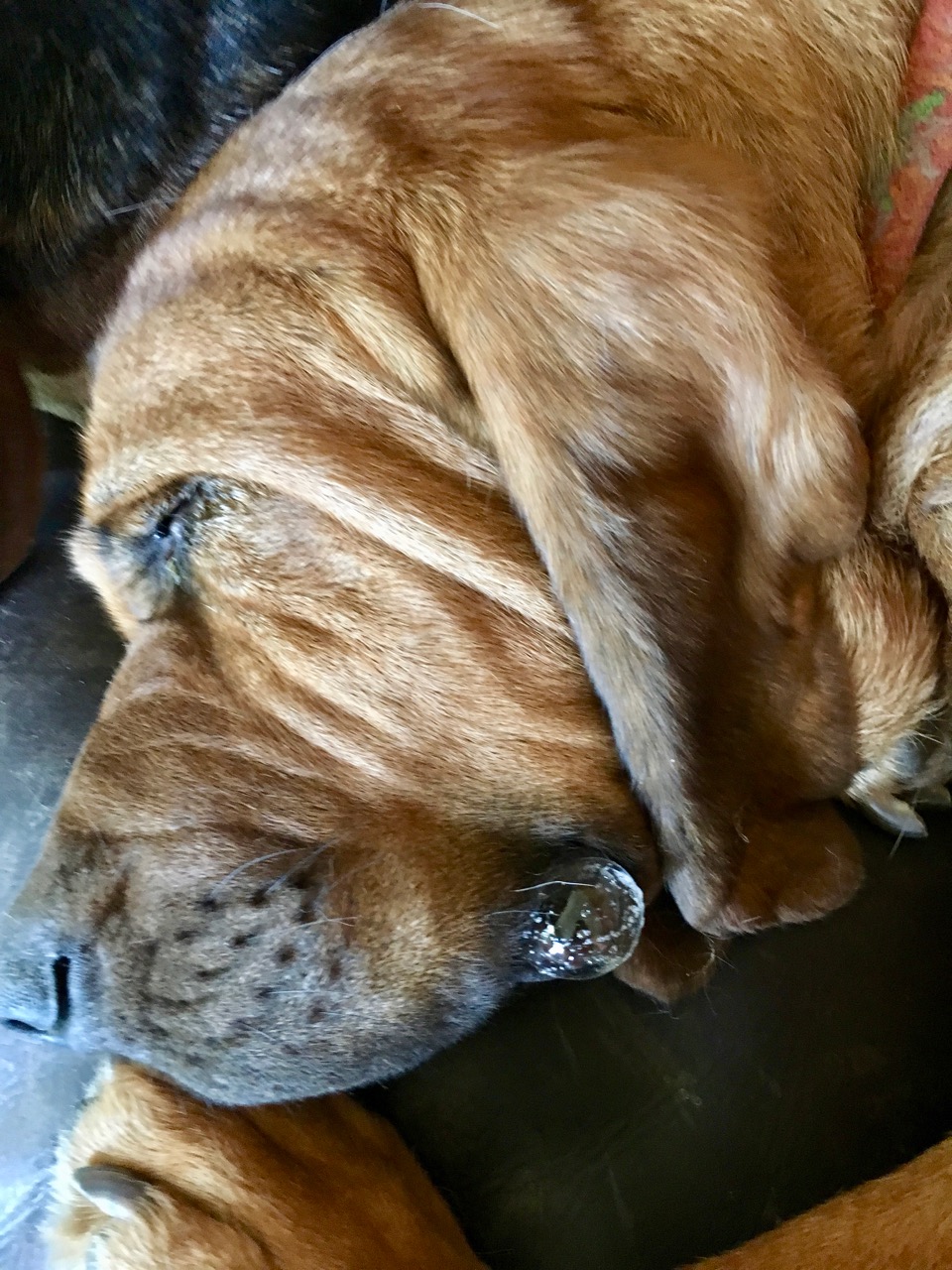 I have posted some photos on this blog when I first bought my iPhone 6s last year. I did an experiment before that and sold my iPhone 5s then went to the 'old fashion' flip phone, just for phone calls. It had other email, texting, smart phone features but I only wanted the flip phone for phone calls.

After 10 months I realized I missed some of the features of the iPhone and one of those was a good camera. I was not seeing the same quality with my old Nikon Cool Pix 3100. So I bought the iPhone 6s last year for the other missed features but to also have a new camera for inside shooting. Yet, I have rarely taken blog photos with it. This morning that changed. 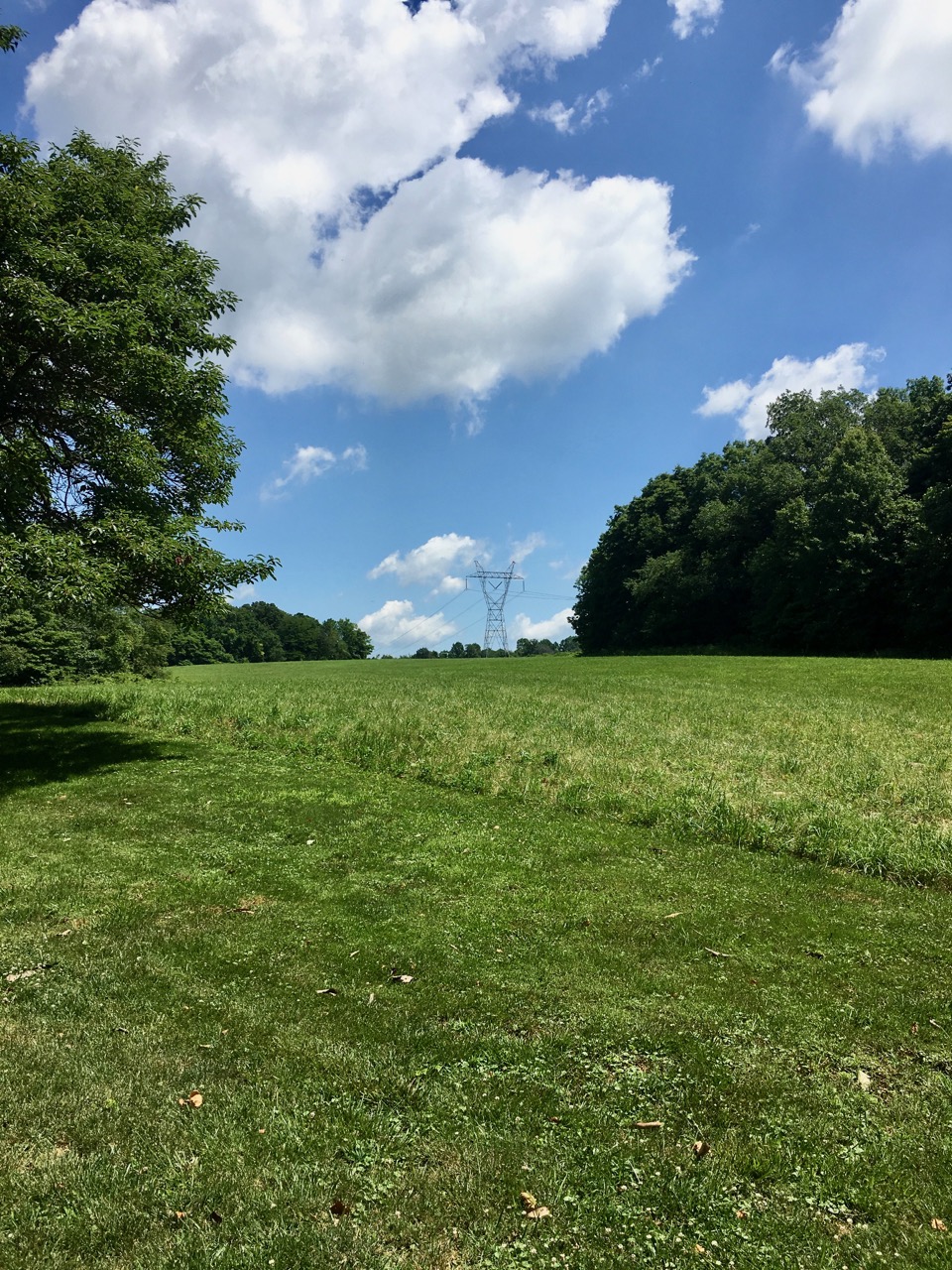 I was reading Al's post over on the Bayfield Bunch last night about his first trip into a retail store that sold smart phones. You can read his story at the link above "Al's post" but basically he was wanting a smart phone for their camera feature. That lit a bulb in my brain where I asked myself why am I not using the iPhone camera for my blog photos? How does the quality compare to my Nikon D3200 DSLR camera? 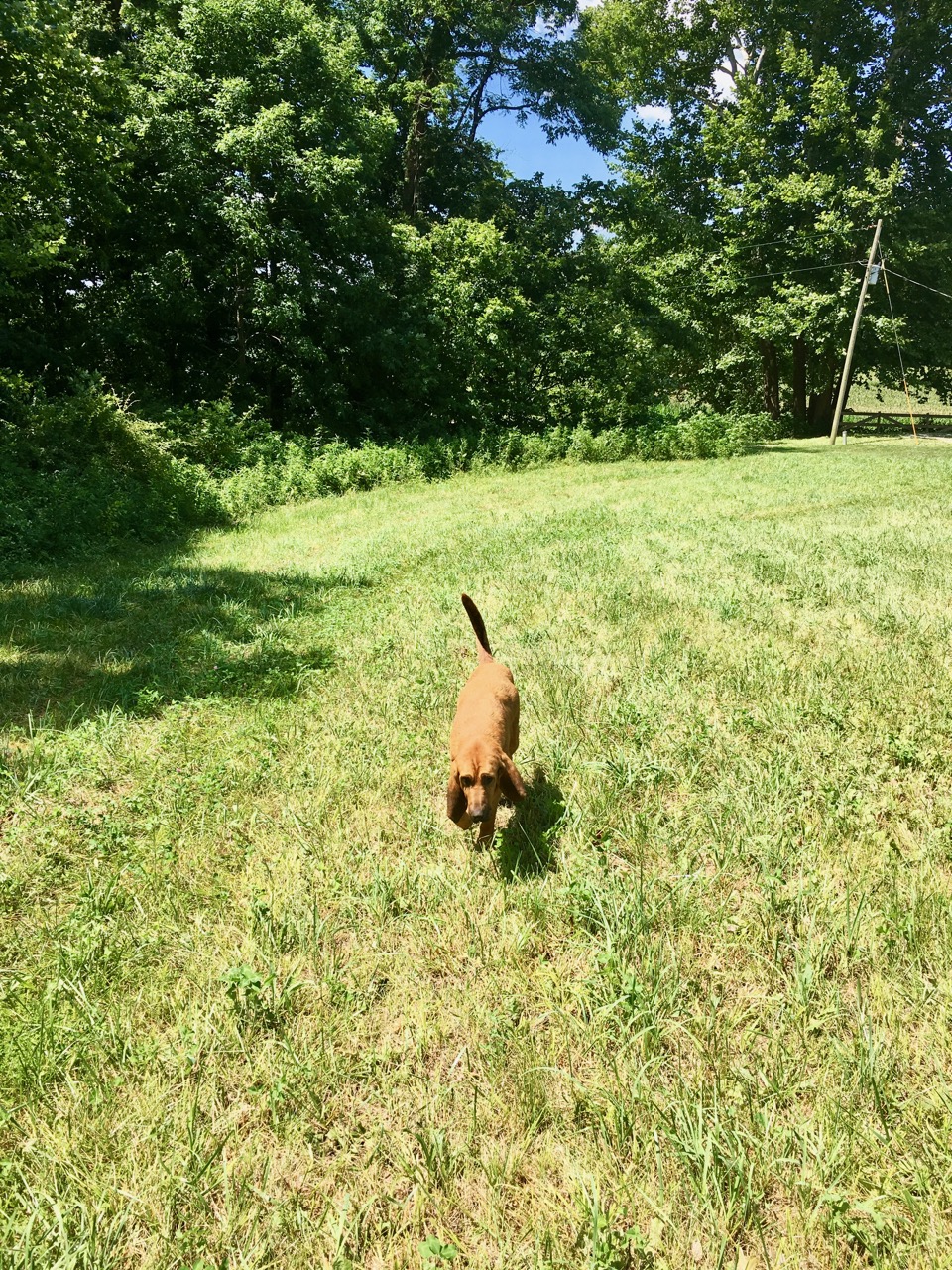 So today you get to see what I found on our first walk of the day. After looking at my two choices in size of photos for the blog, the size I normally use is x-large but with the vertical iPhone photos that makes them almost too big. The large size made the photos look to small. So excuse me if the x-large photos are messed up on your phone or tablet. 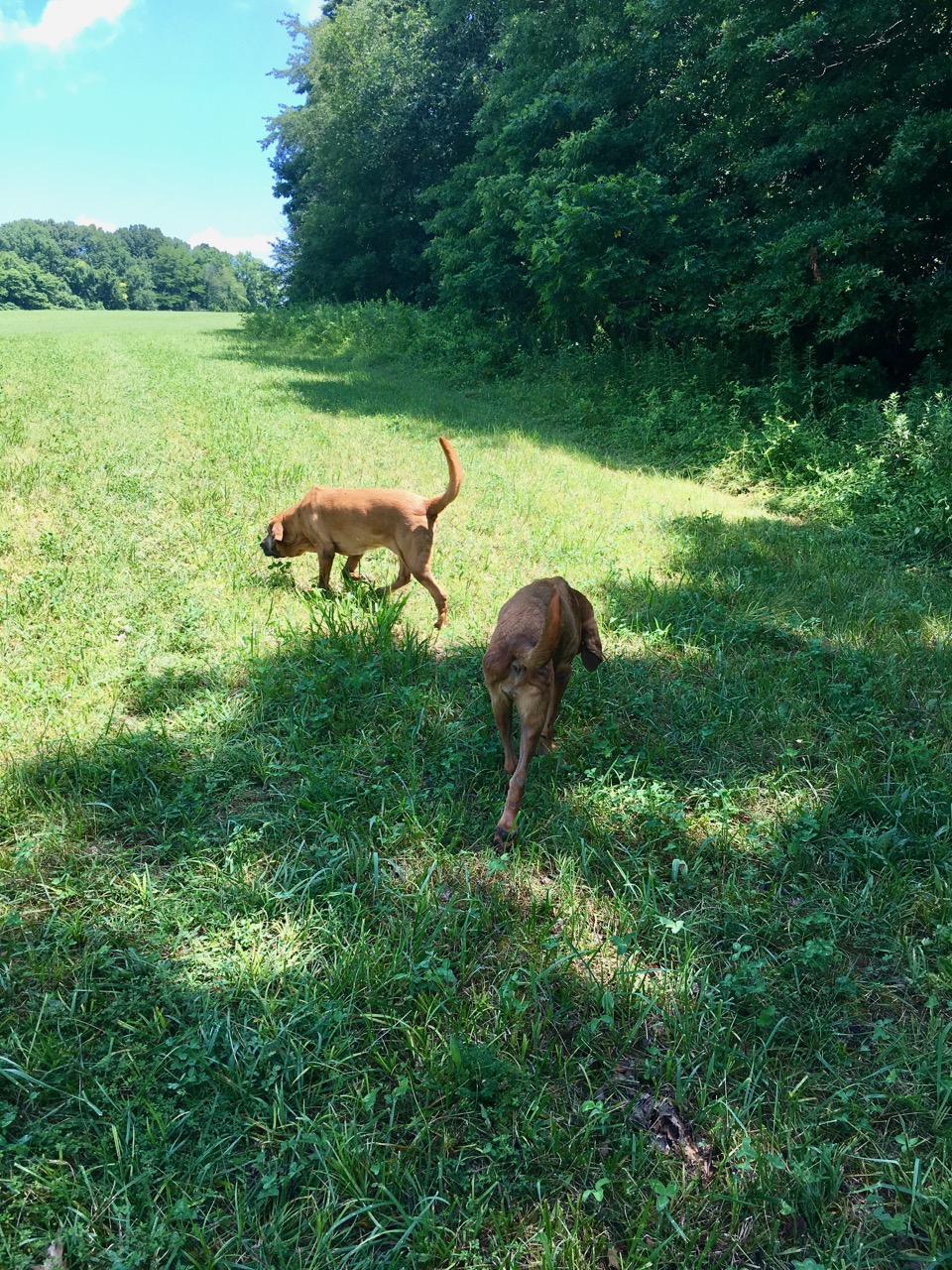 I only adjusted a couple of the photos with one being cropped and two of them enhanced for color, depth etc. All the other photos are exactly as I downloaded them from the phone to my computer and then to the blog. 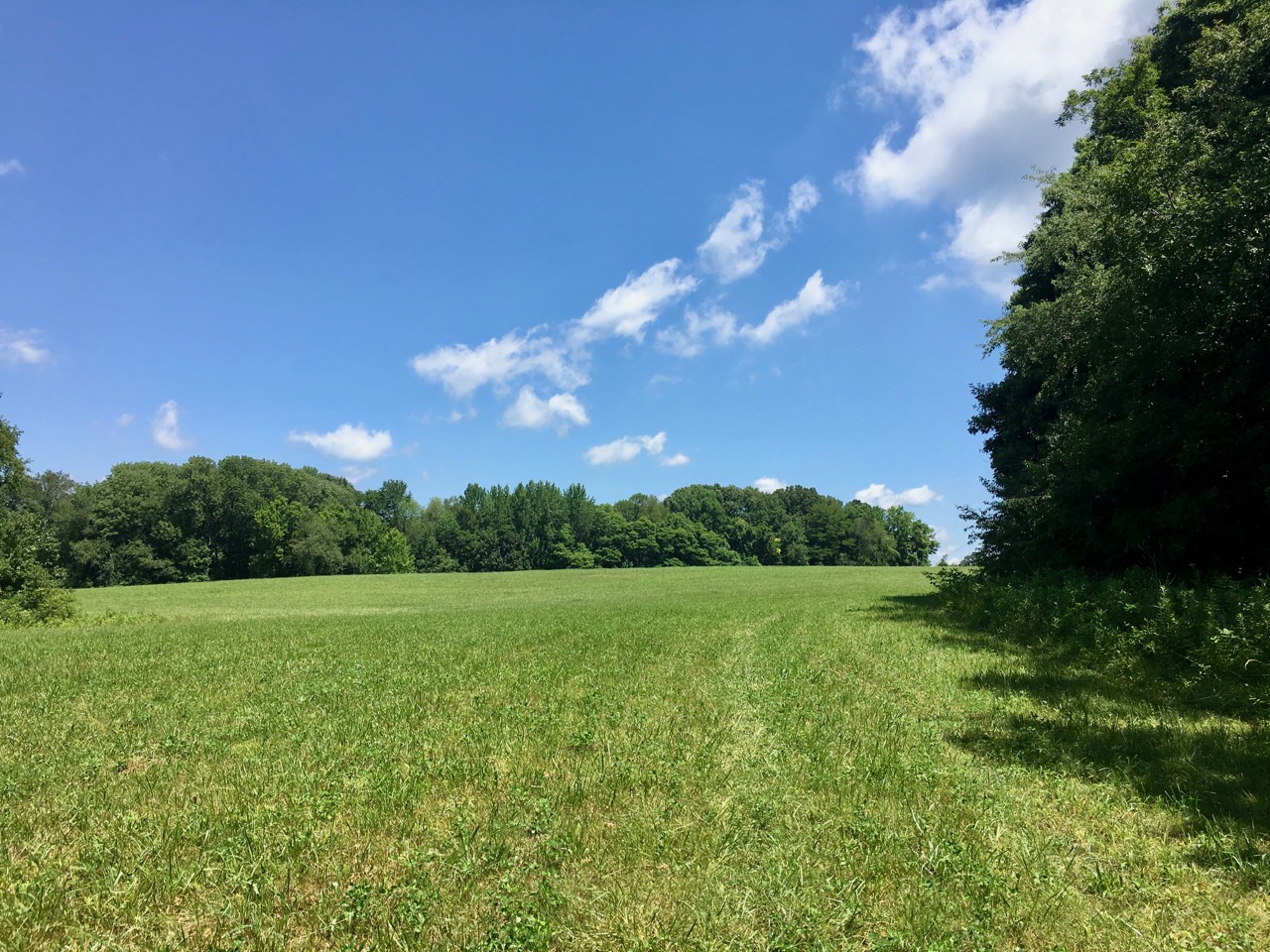 Besides it being another beautiful day here in 'the tropics', I found the colors to be better on the iPhone compared to my Nikon D3200. For me I have seen the photos I took when i first bought the Nikon D3200 in September 2014 to be much much better than the photos I take now. I am still searching for the reason for that. 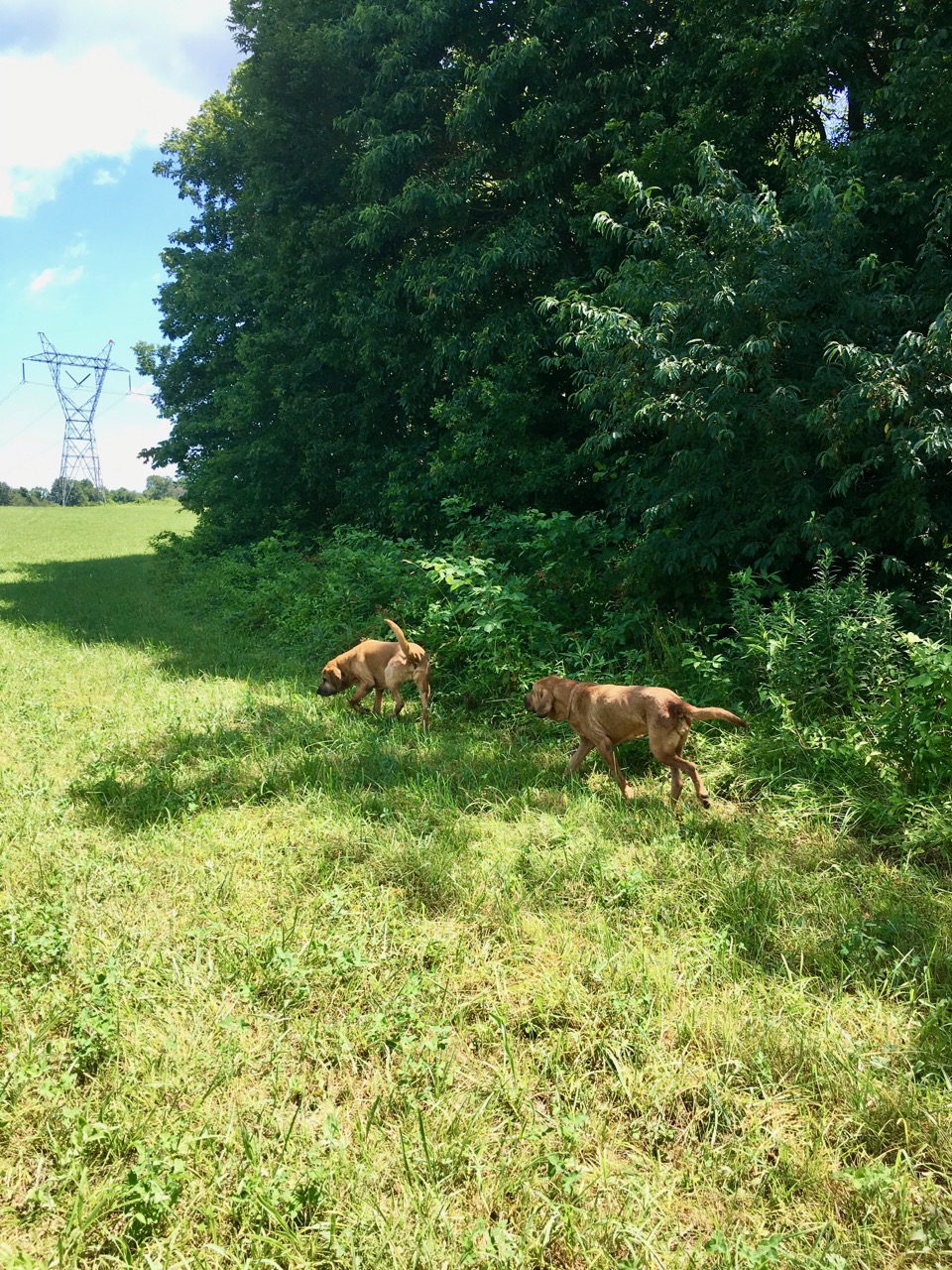 The iPhone 6s camera also took sharper images than the Nikon D3200. I did not have to make any adjustments for the sharpness like I have to at times with the Nikon D3200.

With it being about 10° cooler today after 12 noon it was much nicer to walk today. While local towns were having severe thunderstorms within 25 miles of us last night, we only had hard rain for 15 minutes. 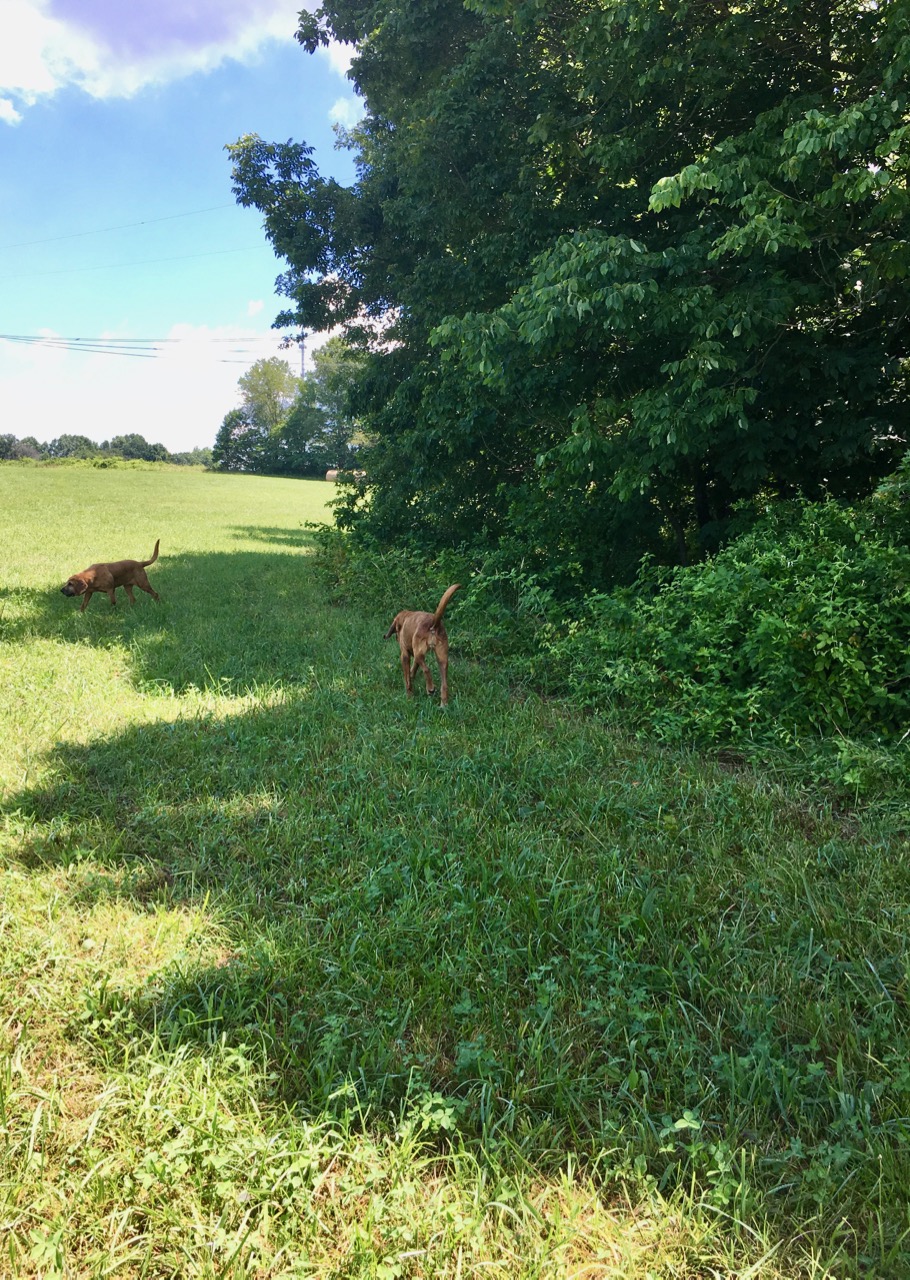 I see now that I should have changed the setting on my iPhone to take "square" pictures instead of the default "photo" setting. If not cropped a lot of these photos are too tall. 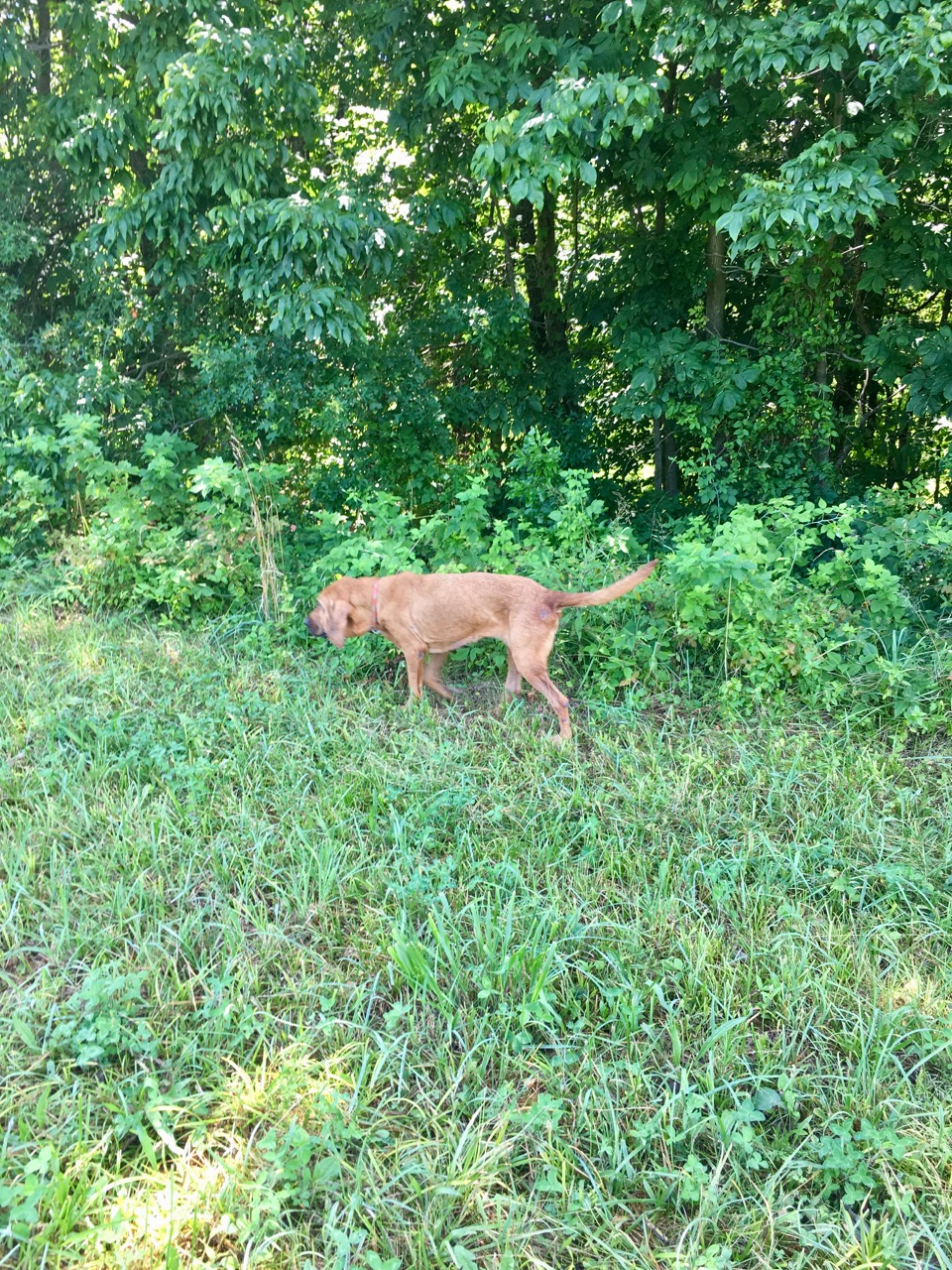 I found out today that Stella was the one that was sick in the middle of the night last night while I was sleeping. I found a wet roll of tall grass by the door, so she did try to go outside before she got sick. I didn't hear a thing. 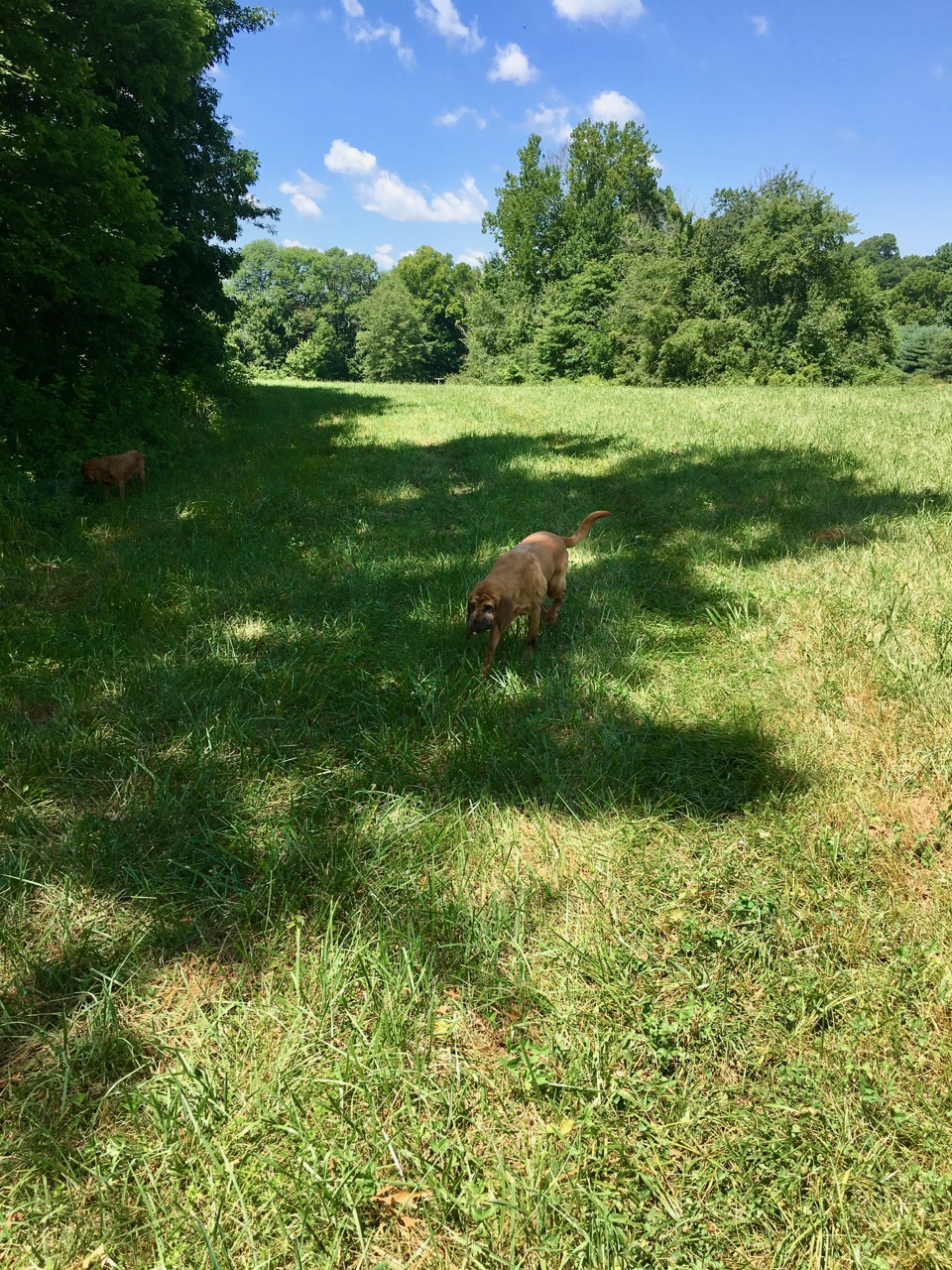 I could have cropped these pictures to cut away some of the ground and sky out of them but as a test I wanted to see just what the iPhone would give me. I was shooting blind basically because with the bright sunshine I could not see what I was taking a picture of on my screen, unless I used my body to block out the sunshine. 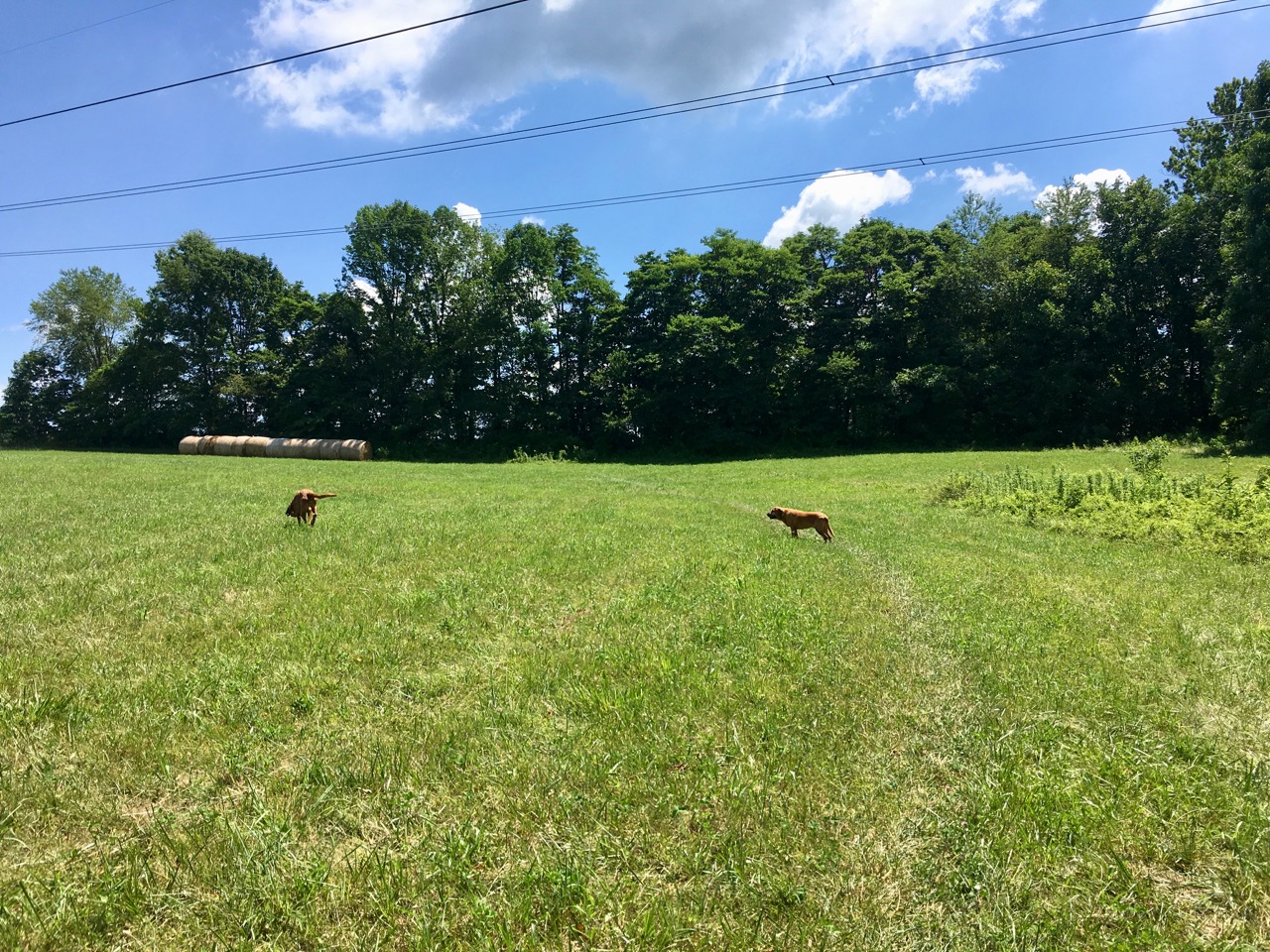 This camera is a 12-megapixel, autofocus, optical image stabilization, true tone flash, panorama up to 63 megapixels, timer mode, burst mode, f/2.2 aperture, 5x digital zoom, IR filter, auto image stabilization, noise reduction, face detection and photo geotagging. It will also shoot video which I may have to try sometime once I figure out how to post a video on this blog. 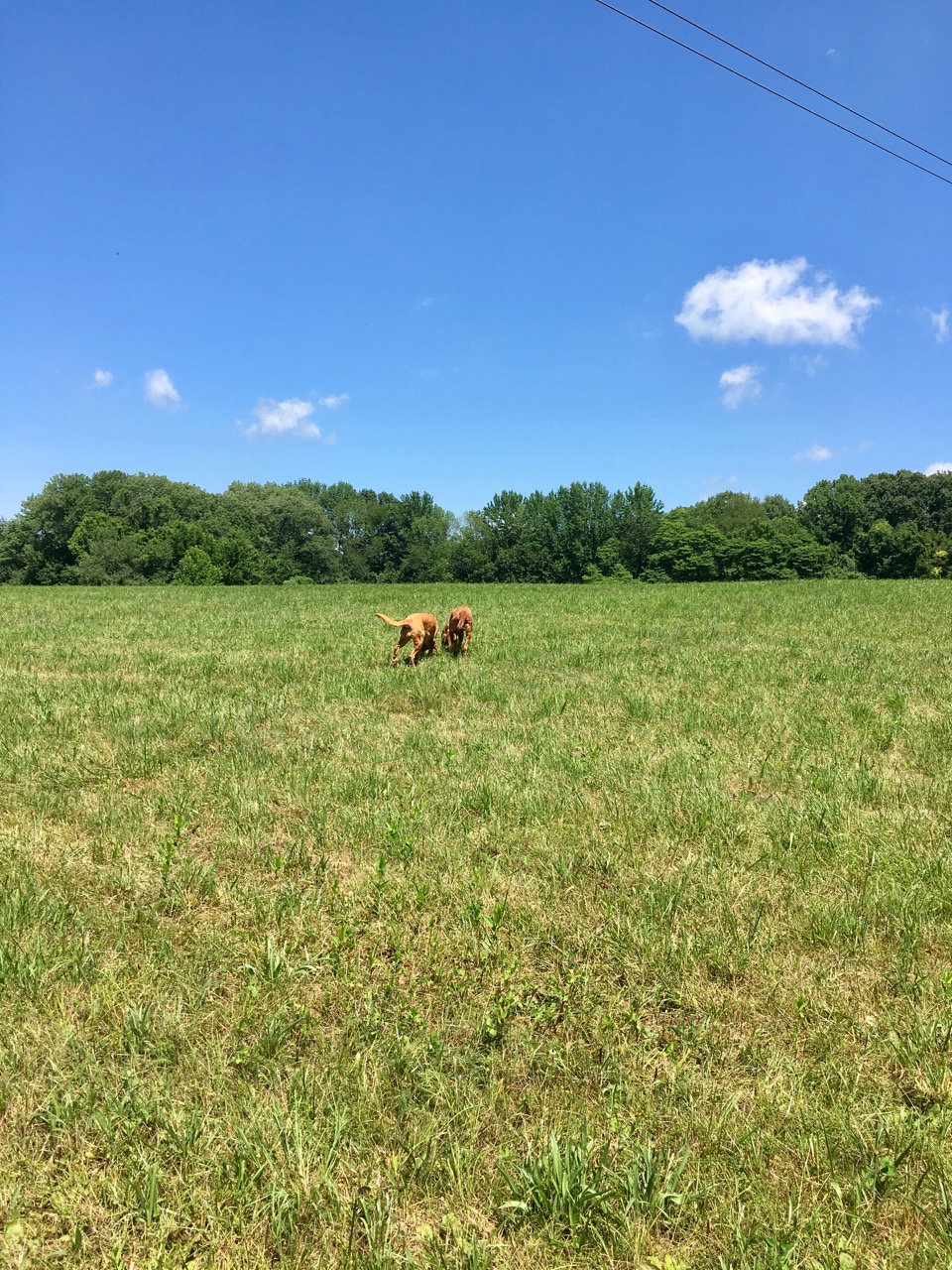 There are a lot more features on this phone that I don't use. I don't mind learning the ones I don't know but basically I like only certain things on the iPhone or any smartphone and use those. 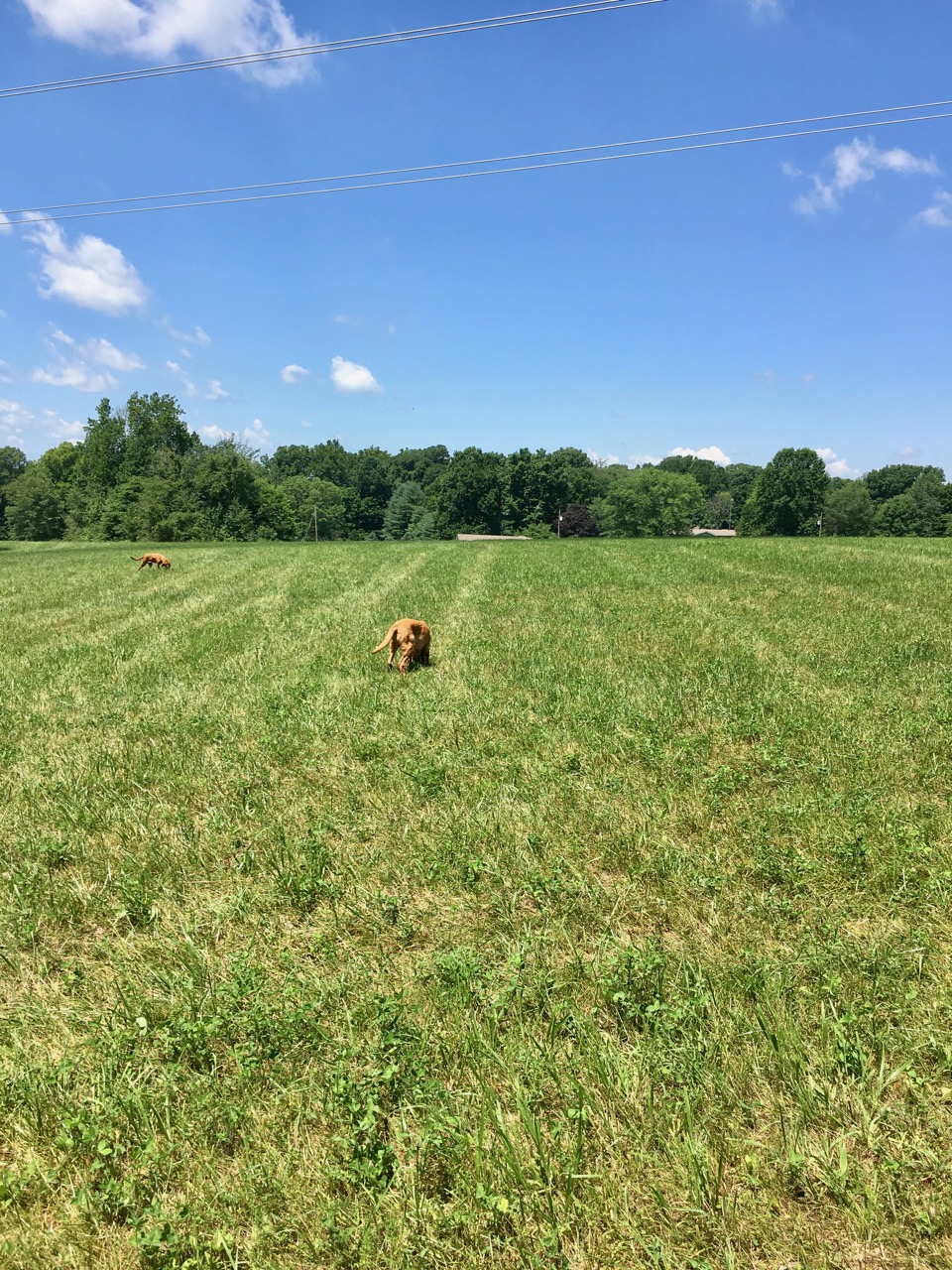 What do you think of the pictures so far? 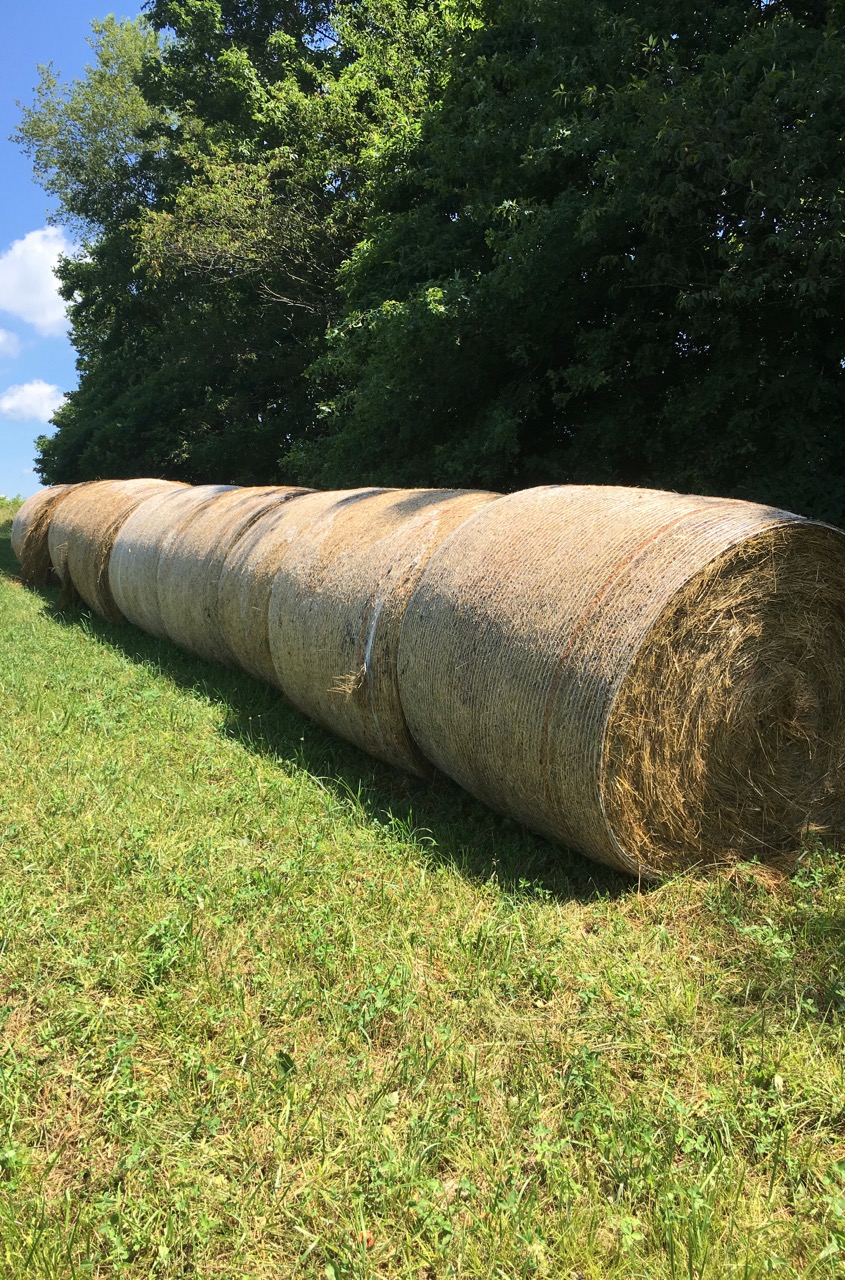 I do know it was much easier to carry than the light Nikon D3200 but like I said, in the bright sunshine I could not see what I was taking a picture of. 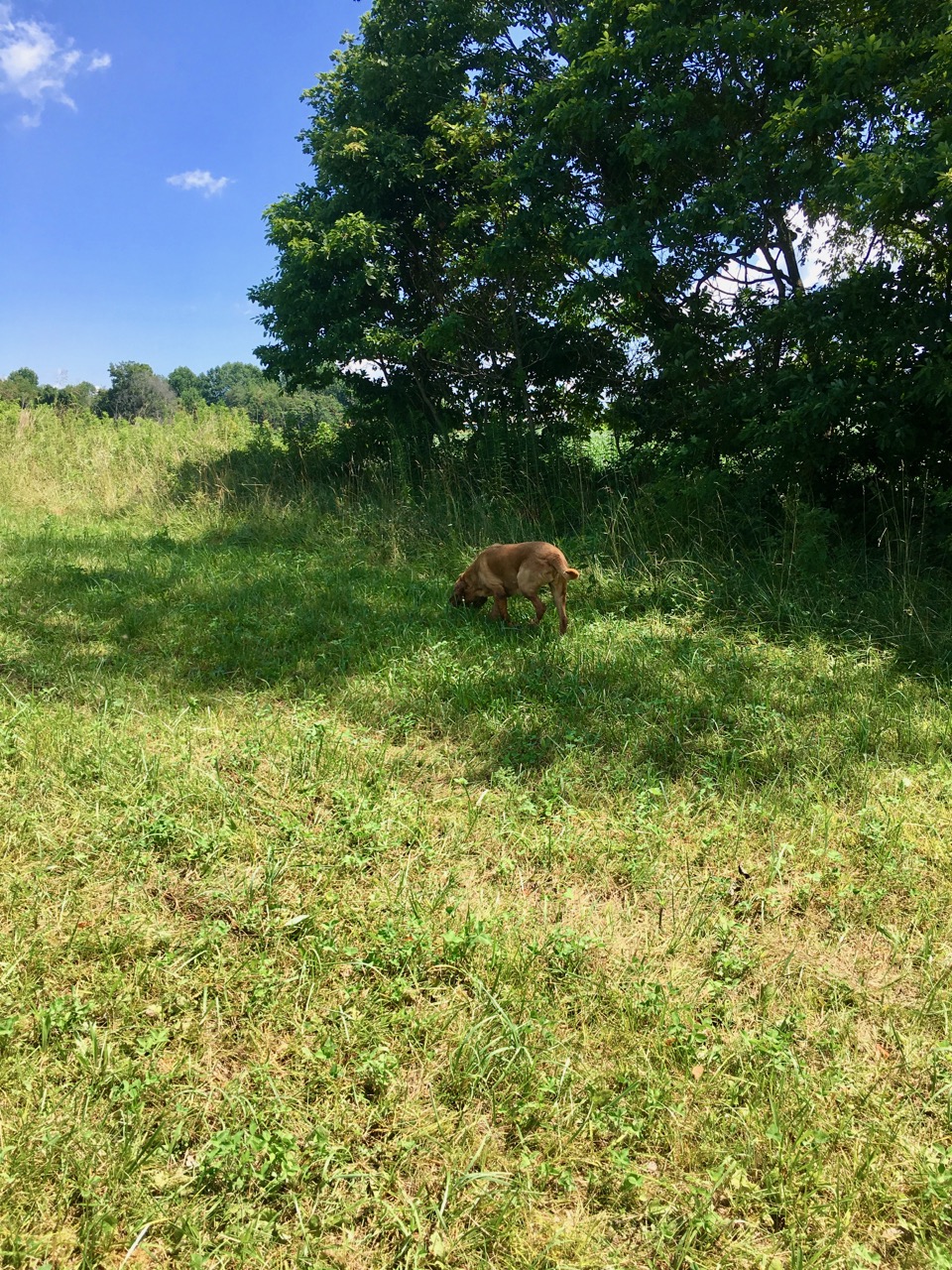 I have my settings where these photos don't automatically go to the iCloud because I don't have enough memory and I refuse to pay for 'cloud storage'. They will automatically load into Google Photos instantly. I will load them into Flickr manually like I do the photos taken with the Nikon D3200. 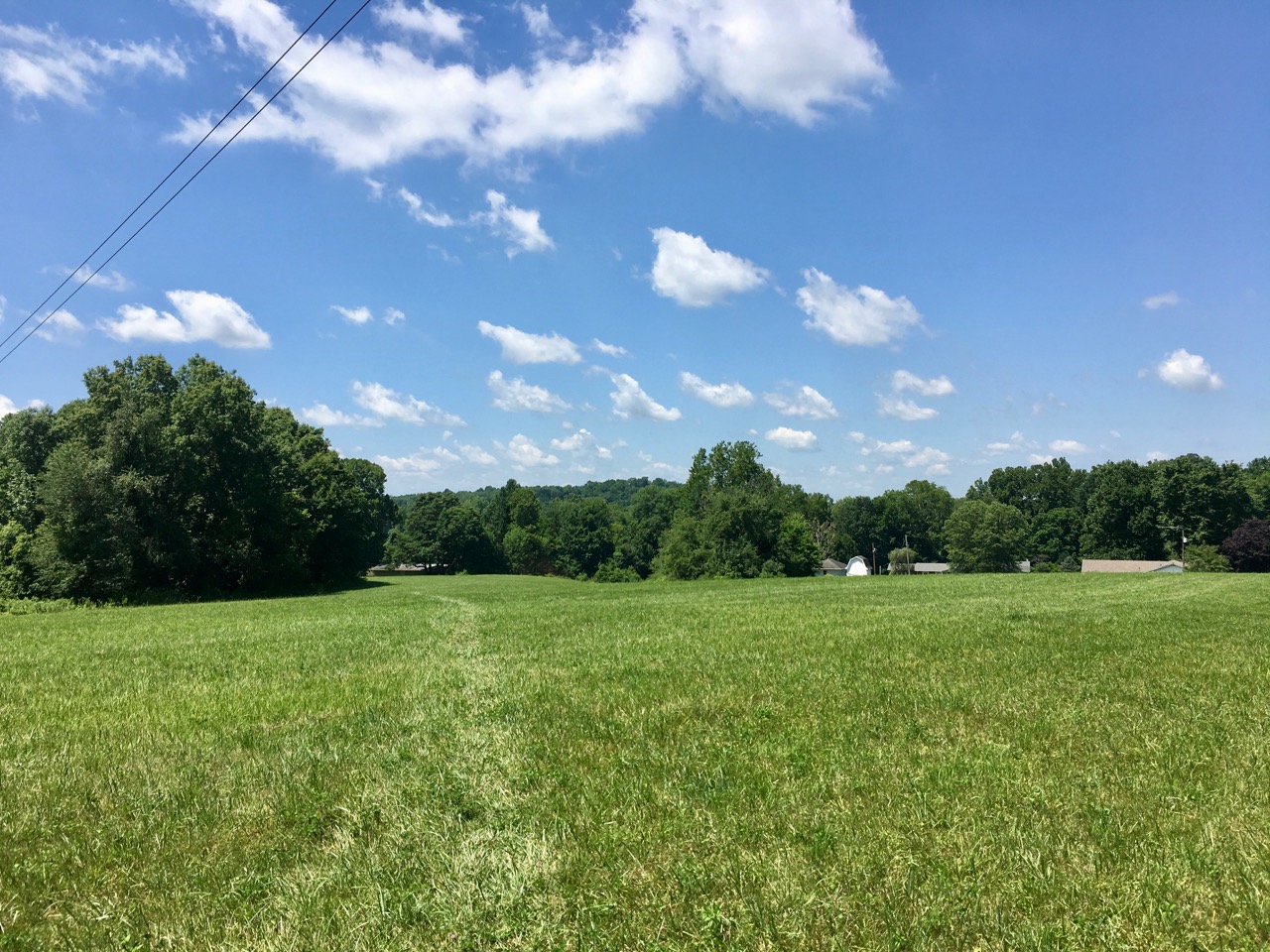 My weather app that comes with the iPhone shows this kind of weather for the next 10 days with two to three days of possible light showers. We know those rain days are always flexible and may not happen. 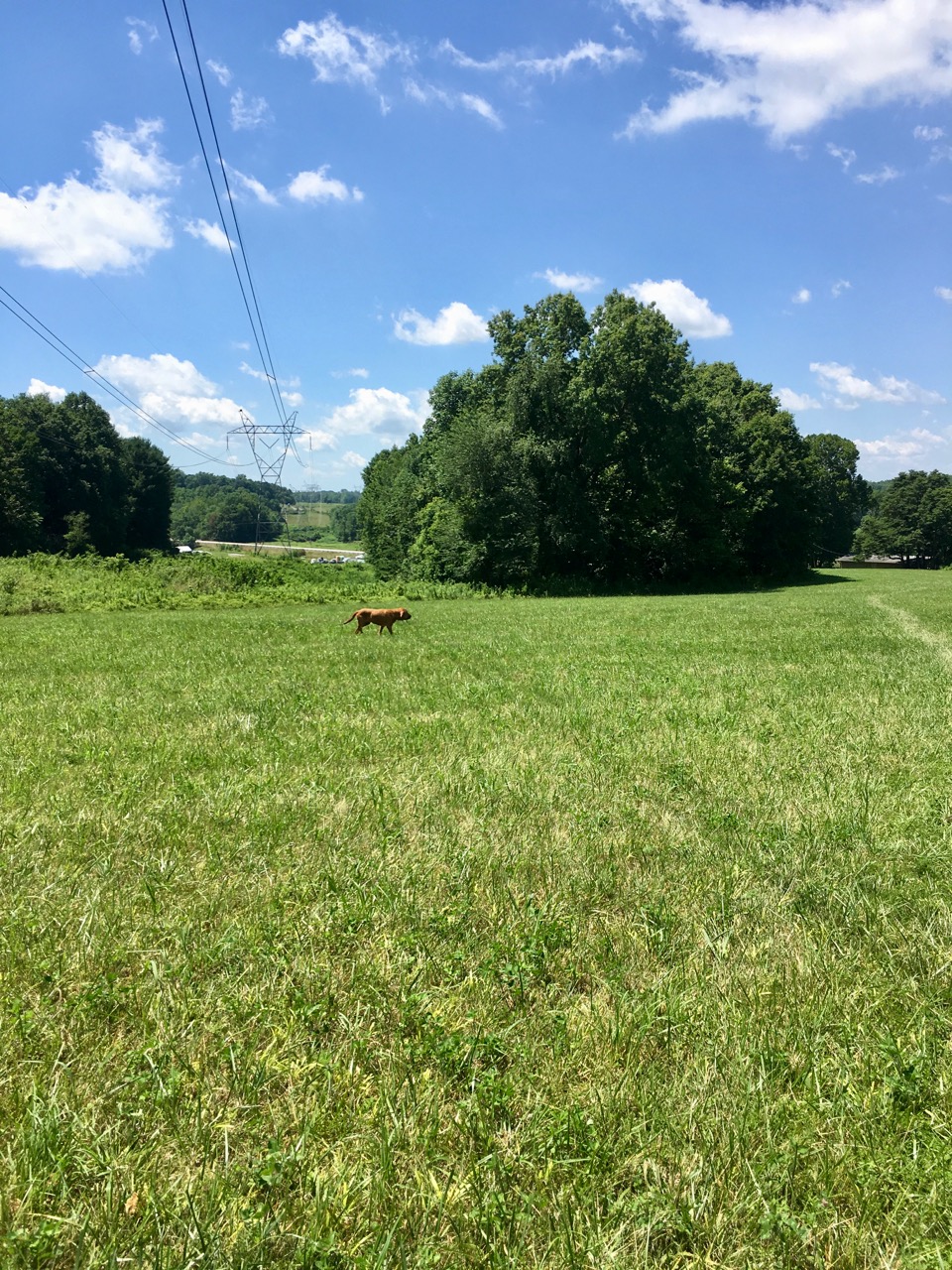 Stella may wander on her own while Sadie and I walk but lately she has been veering toward the return path to meet us as we walk back. 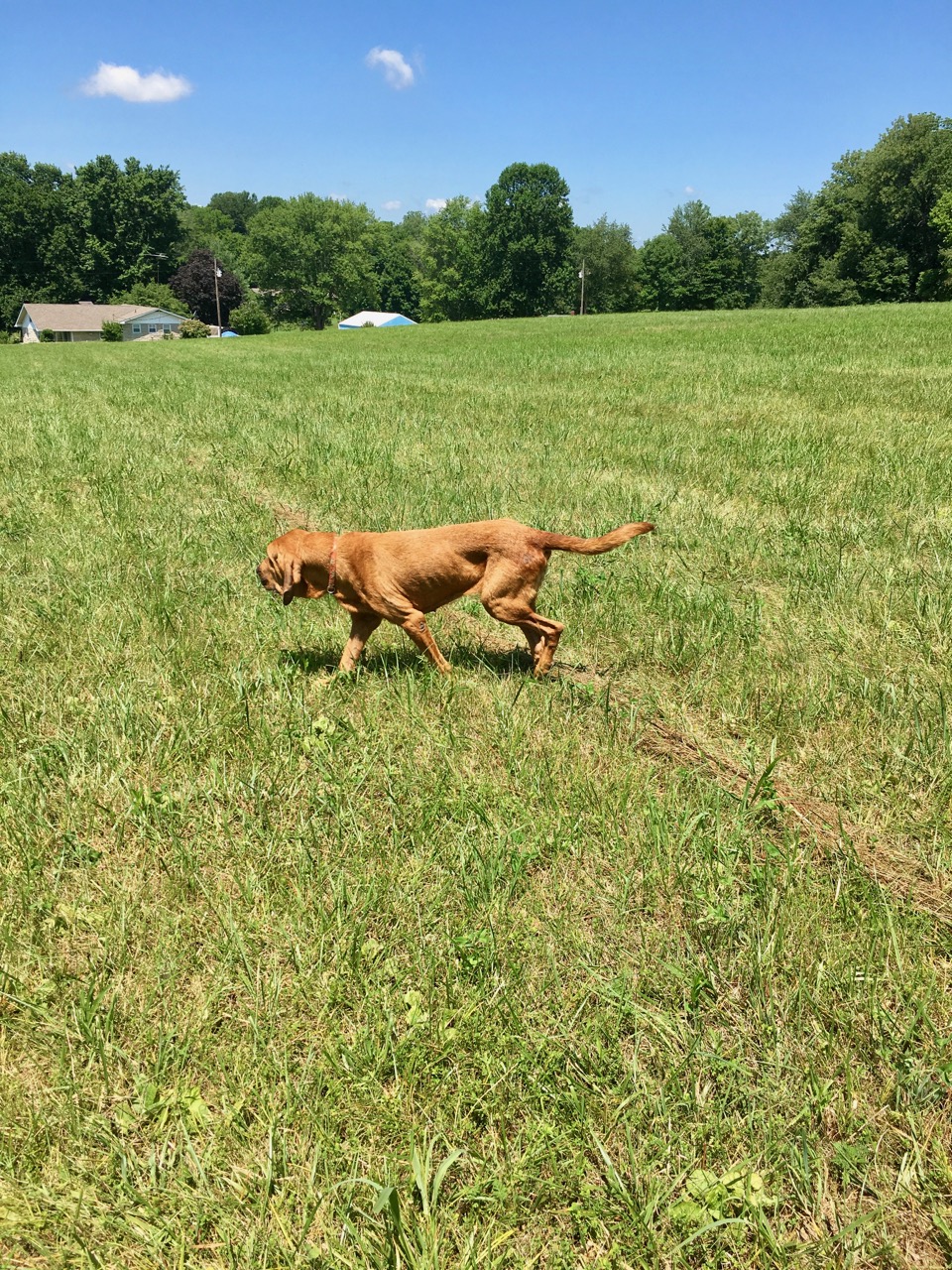 It was another day where it looked like she is gaining weight. You can see some ribs there but her chest is filling back in and looks much bigger than it did just a month ago. 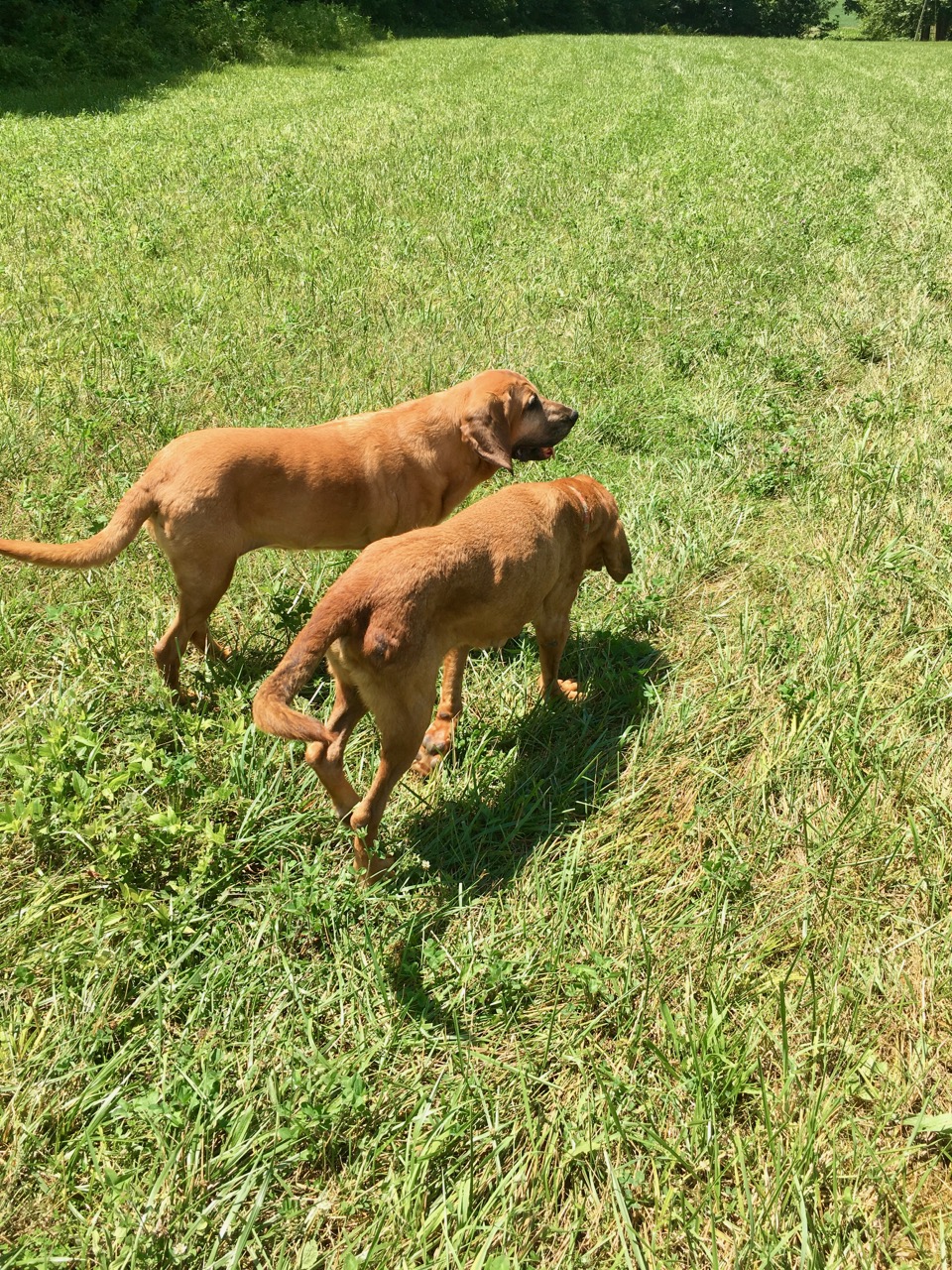 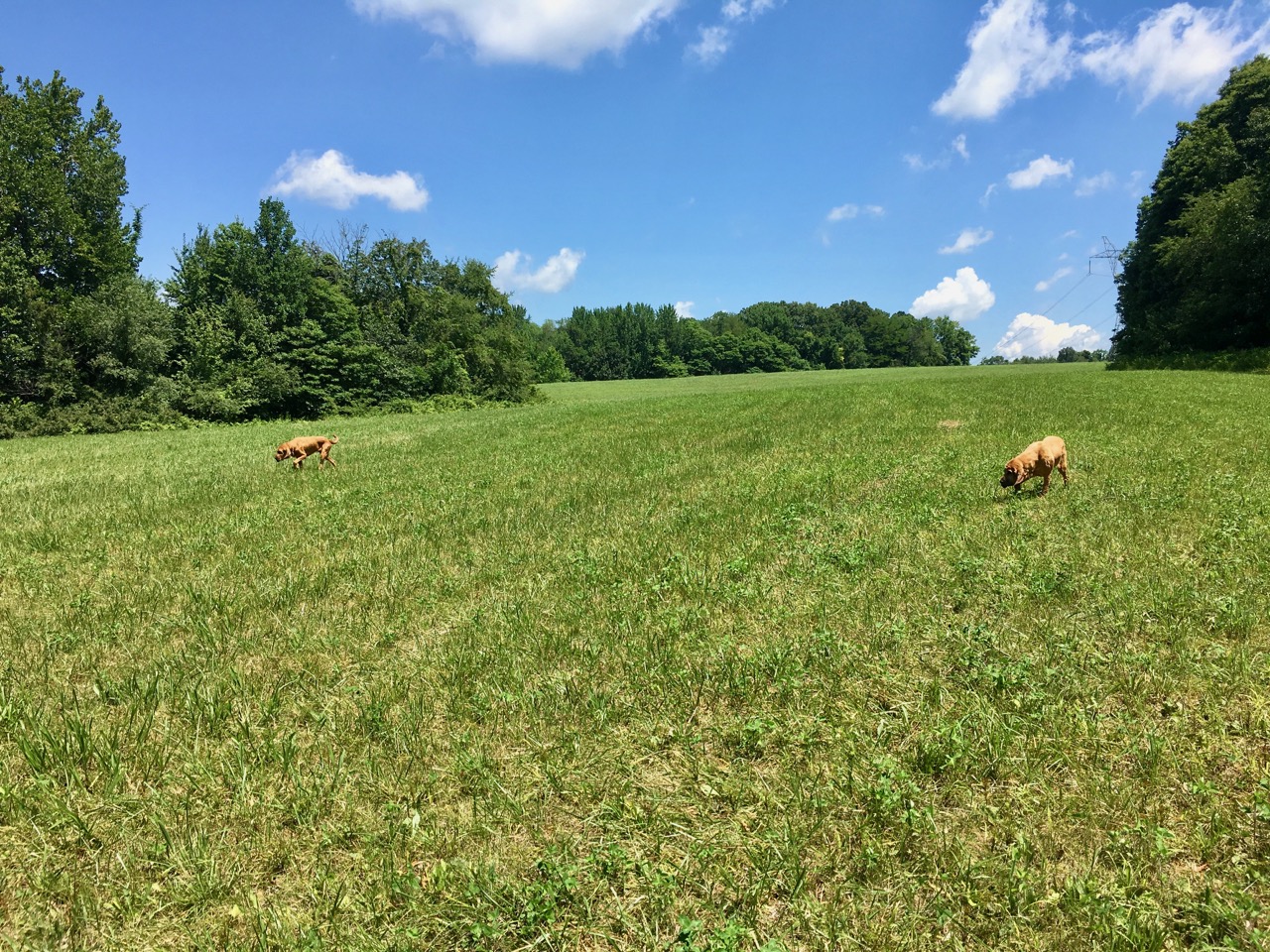 With breakfast being served much later today the hounds will not have their 2nd meal until later this afternoon, a time that I would prefer anyway. I'd like to split their meals 8-10 hours apart but they usually want food again 3 hours after their first meal. 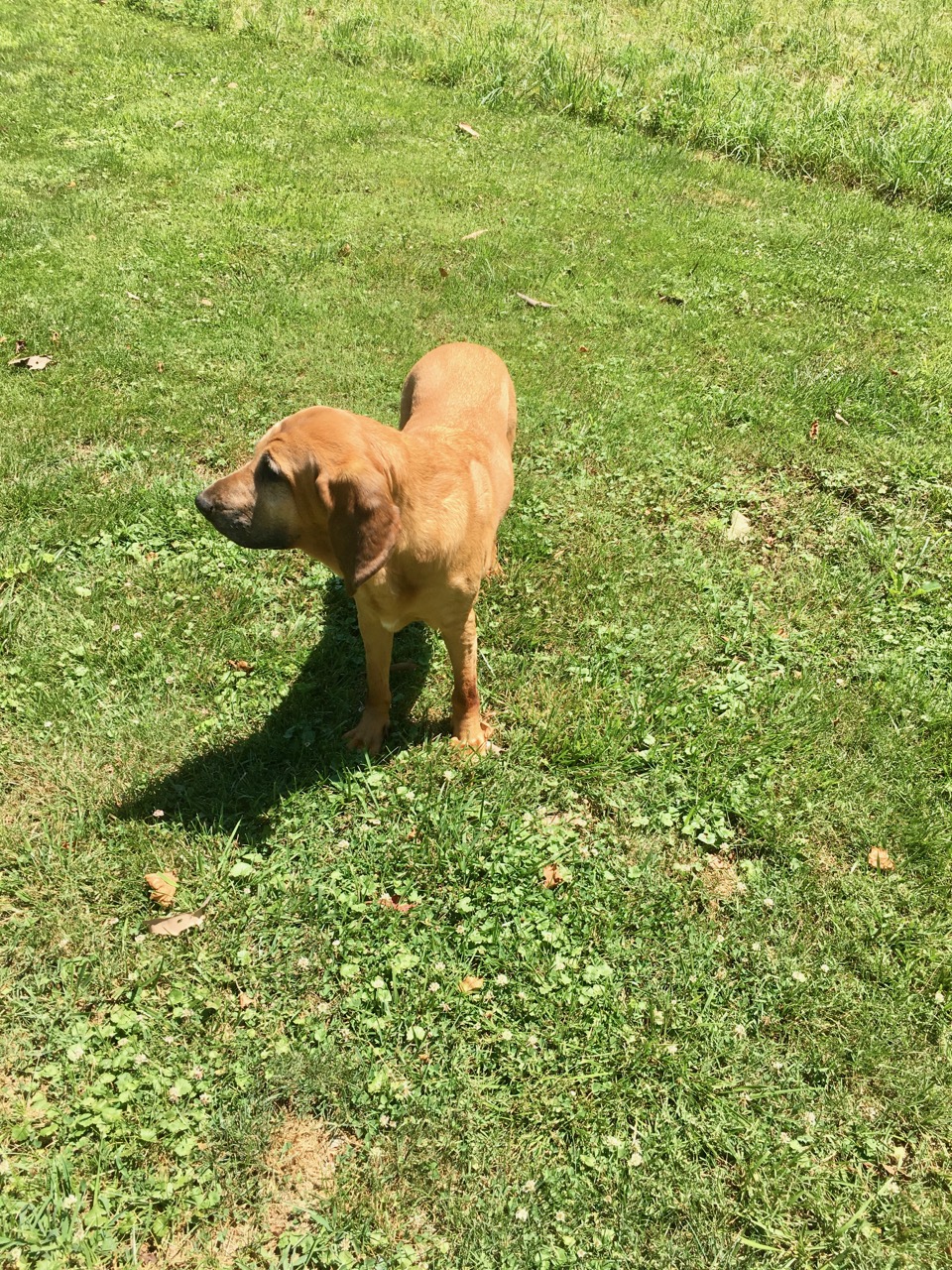 After seeing these pictures I think I will try more with the iPhone on our afternoon/early evening walk today. I am going to change the setting to "square" to see if that makes a difference in size and presentation. 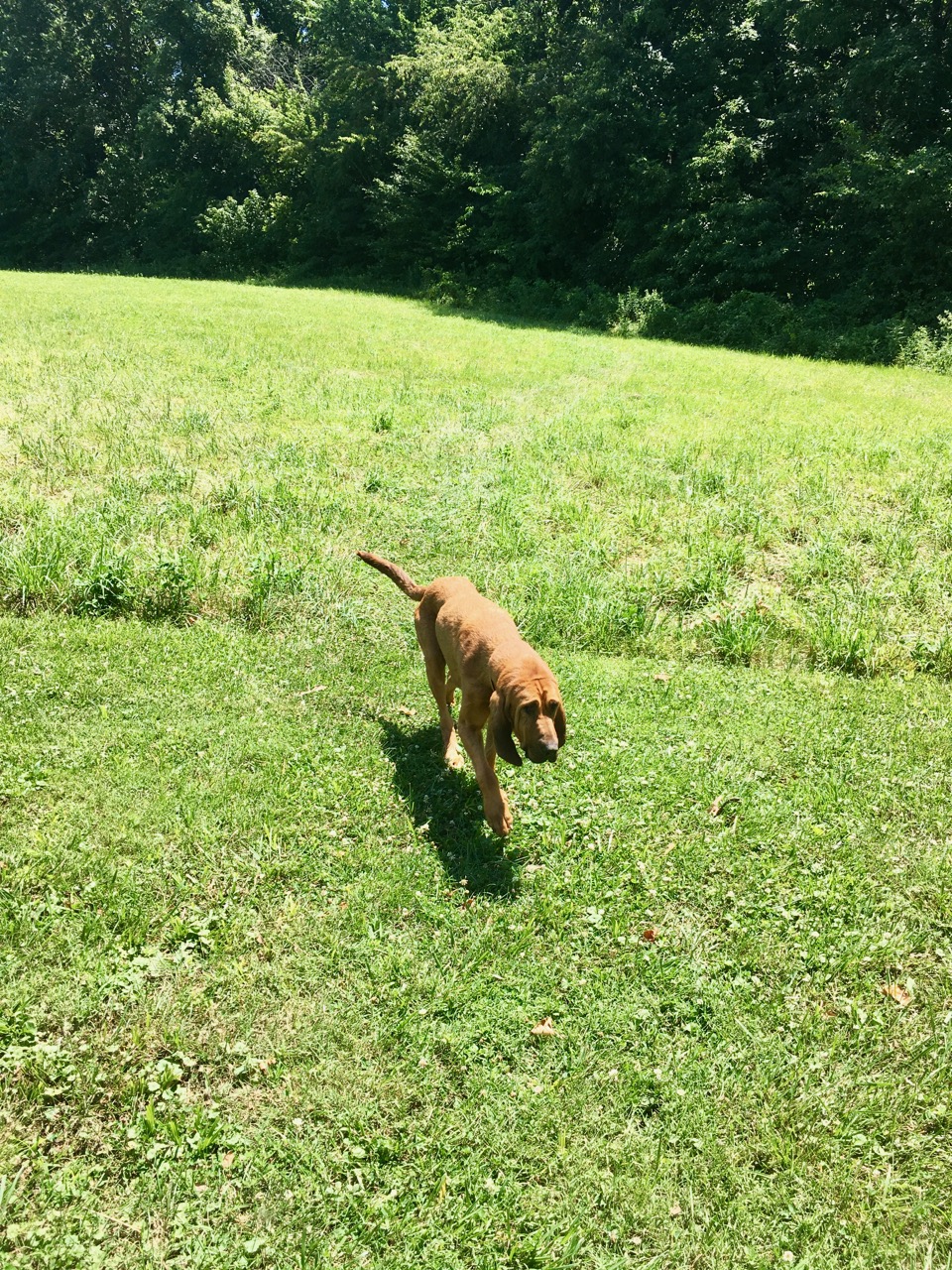 With only 2 days to go until I start a new HughesNet billing cycle and a new 20Gb of data, I am still about 1.5Gb's of unused data off of my daily pace. I'll be using that up by looking at more YouTube videos from fellow bloggers and a trailer that I am looking at.

As many of you do, I follow Tioga George's blog on my sidebar and noticed recently one of his followers that comments a lot seemed interesting. So I added his blog on my sidebar today. If you like adventure you might want to take a look ... it's called Point To Zero.

I also added Gone With The Wynns. I use to follow them years ago but deleted them from the sidebar during one of my past cleaning periods where 53 blogs went to 28 blogs on my sidebar. They use to RV, have lived off grid, but are now in traveling on their sailboat.

Another blog I have been following for a while is JD Finley. He is in the process of converting a large passenger bus into a RV. Some great ideas and he documents all of his work with pictures on his blog. Very talented.

Not much is going to happen today. I might have to head out for some grocery shopping as my food supply is low. I sure wish I had online delivery available for groceries out here in rural America or maybe that Amazon drone delivery idea. Even a maid or personal assistant hire might not be a bad idea. I'm not sure if I am really joking about that last idea, doesn't sound like a bad one.

Nothing is going to be purchased for a while but lately I have been back to looking at trailers, trucks, converted cargo trailers and cargo vans ... I'll continue that research today while staying cool while drinking iced tea.

My internal GPS has calibrated itself ... today feels like a Saturday.