Recently the photos on the blog all seem to be of Stella and Sadie. I might catch Heidi sometimes in the afternoon right after lunch but it's rare for any other times. Because of that, a few readers have asked if Heidi is okay, where is she?, does she go on our walks anymore? Well .... for any chances of a Heidi photo shoot or her walking, the temps have to be between 70°-75° and NOTHING before noon ... unless lunch is being served. 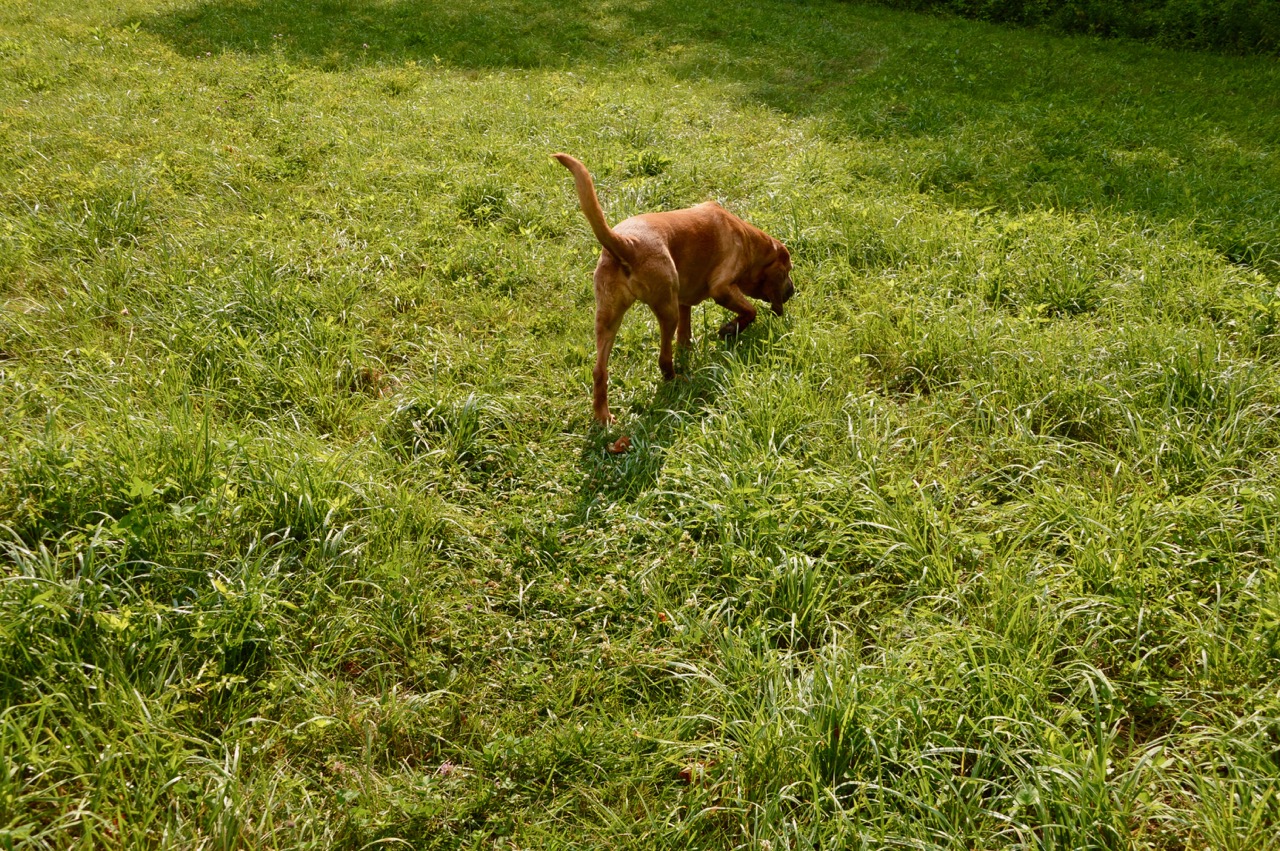 As we start every day, a morning walk through field covered with heavy dew. I decided it might not be a good idea to continue getting my hiking boots wet every day, so I switched back to my North Face snow boots. They are designed for wet fields or heavy snow. I might need to but some smaller shoes/boots to wear in the rain/wet grass. 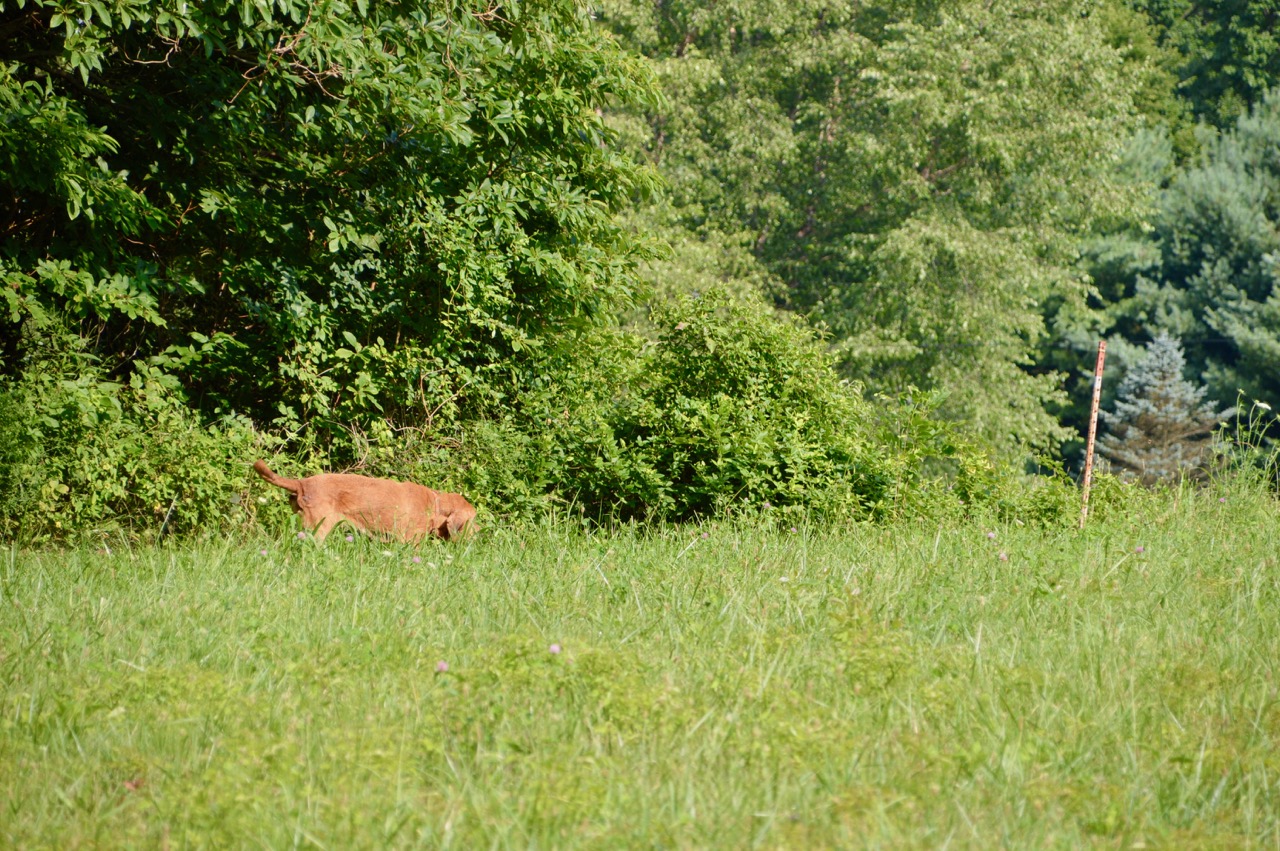 Stella immediately took off to the north while Sadie and I were heading northeast. Is she just testing me to see what I will do? Probably not. She just likes wandering on her own pace and wants to have her way in deciding where to go. She's independent I guess. 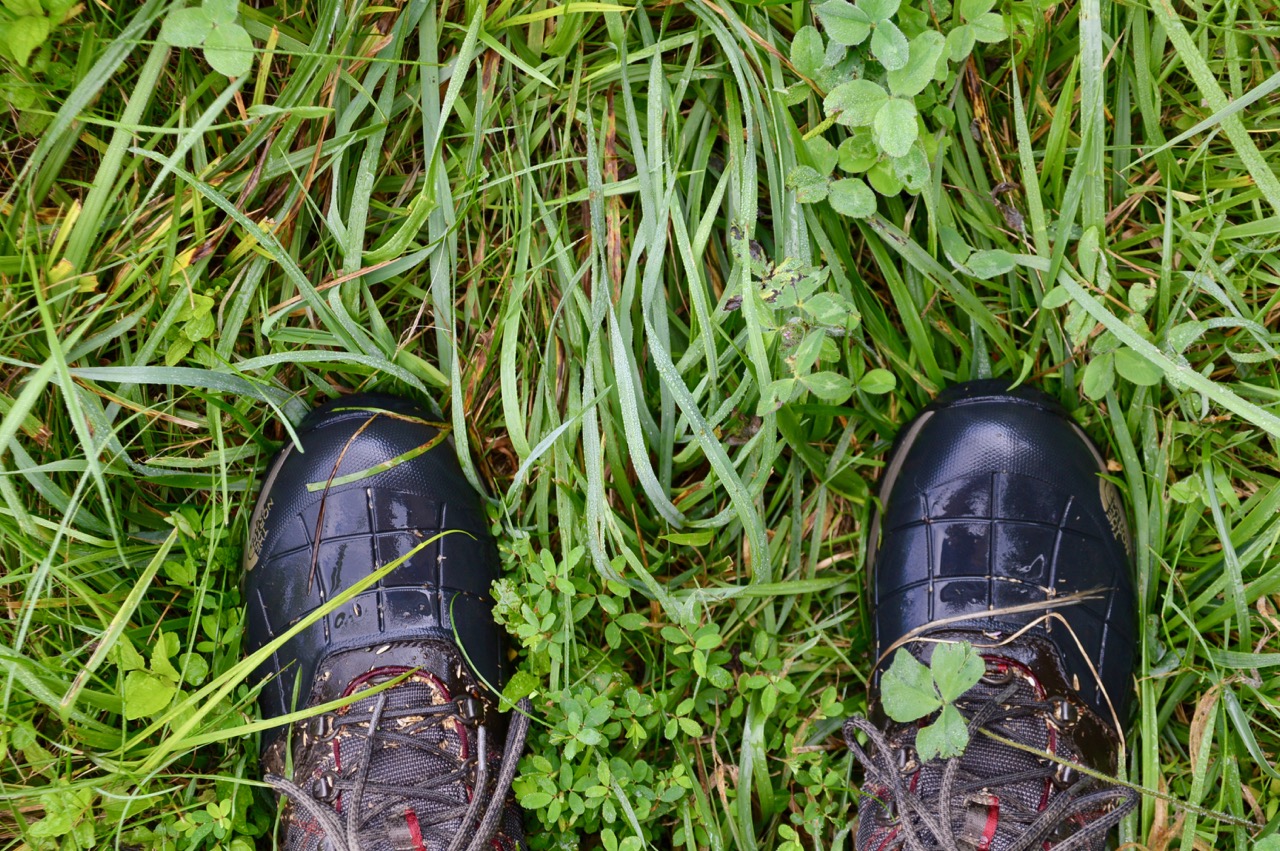 Not more than 20' into the walk my boots are soaked but my feet/socks are dry. 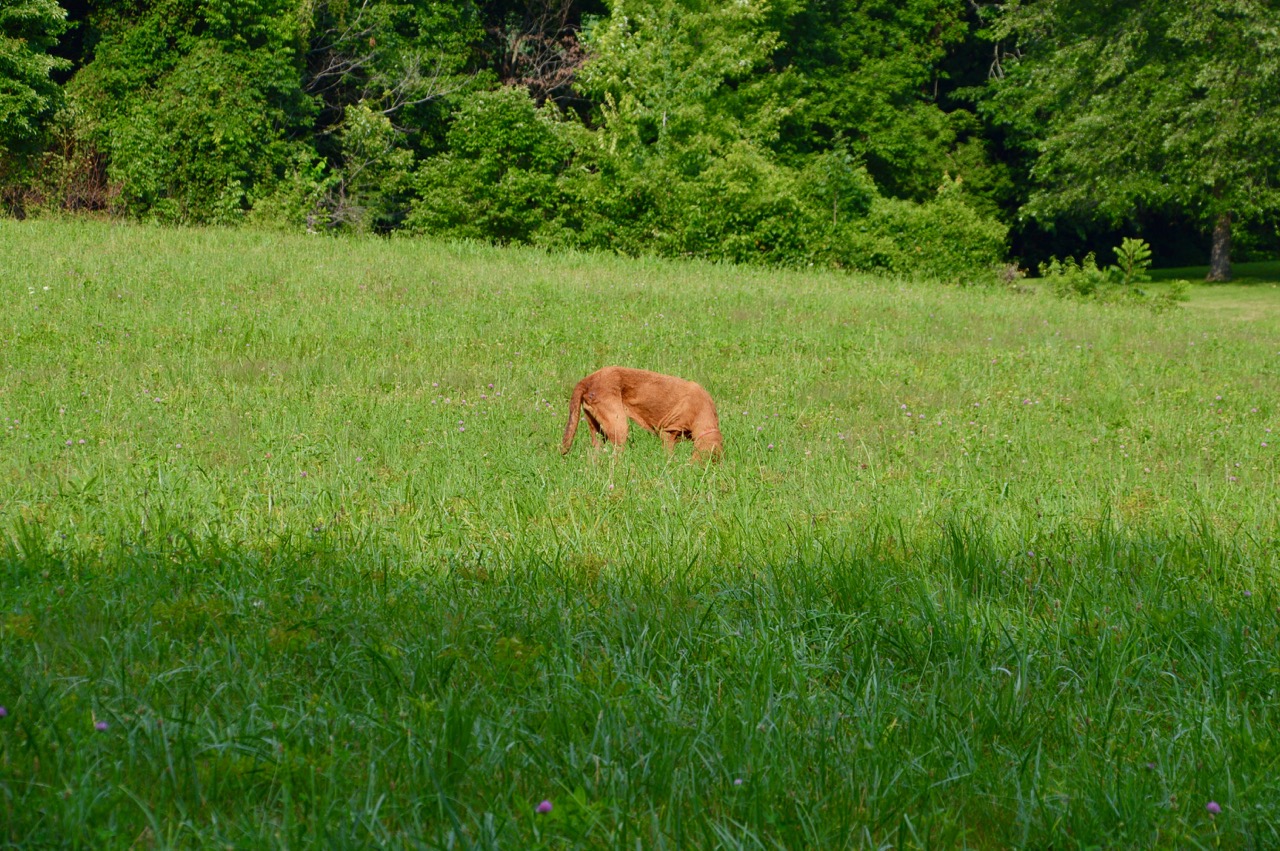 Stella once again started her slow circular path gradually back to Sadie. I was at the first turn waiting to see what she would do. Once she took the time to look up from what she was eating and noticed Sadie had found something ... she came trotting in our direction. She wouldn't want Sadie to enjoy something without her. 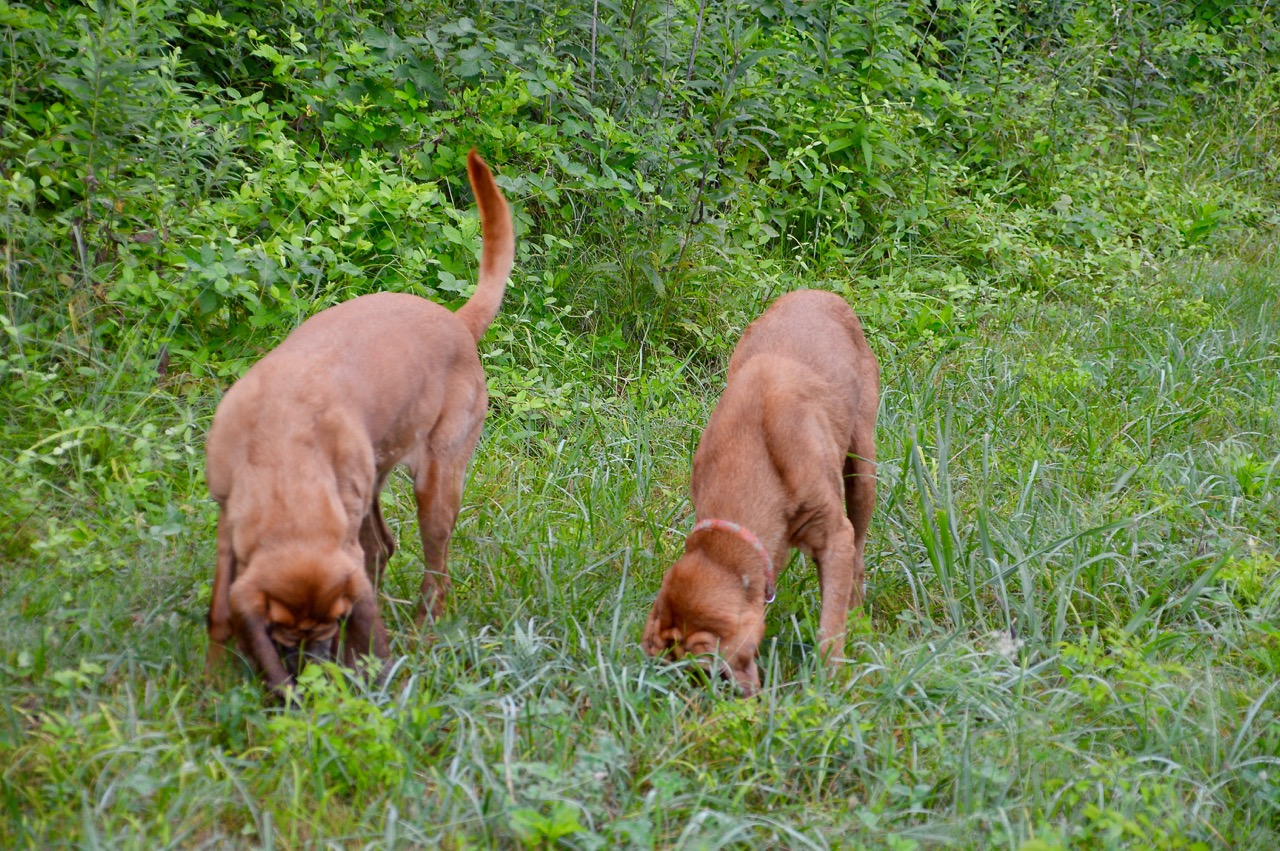 Sadie was already reacting from the start of the walk as if the field had been cleared of all previous scents and this morning's canvas was full of new deer scent all over the field ... specifically along the edge between the field and woods. 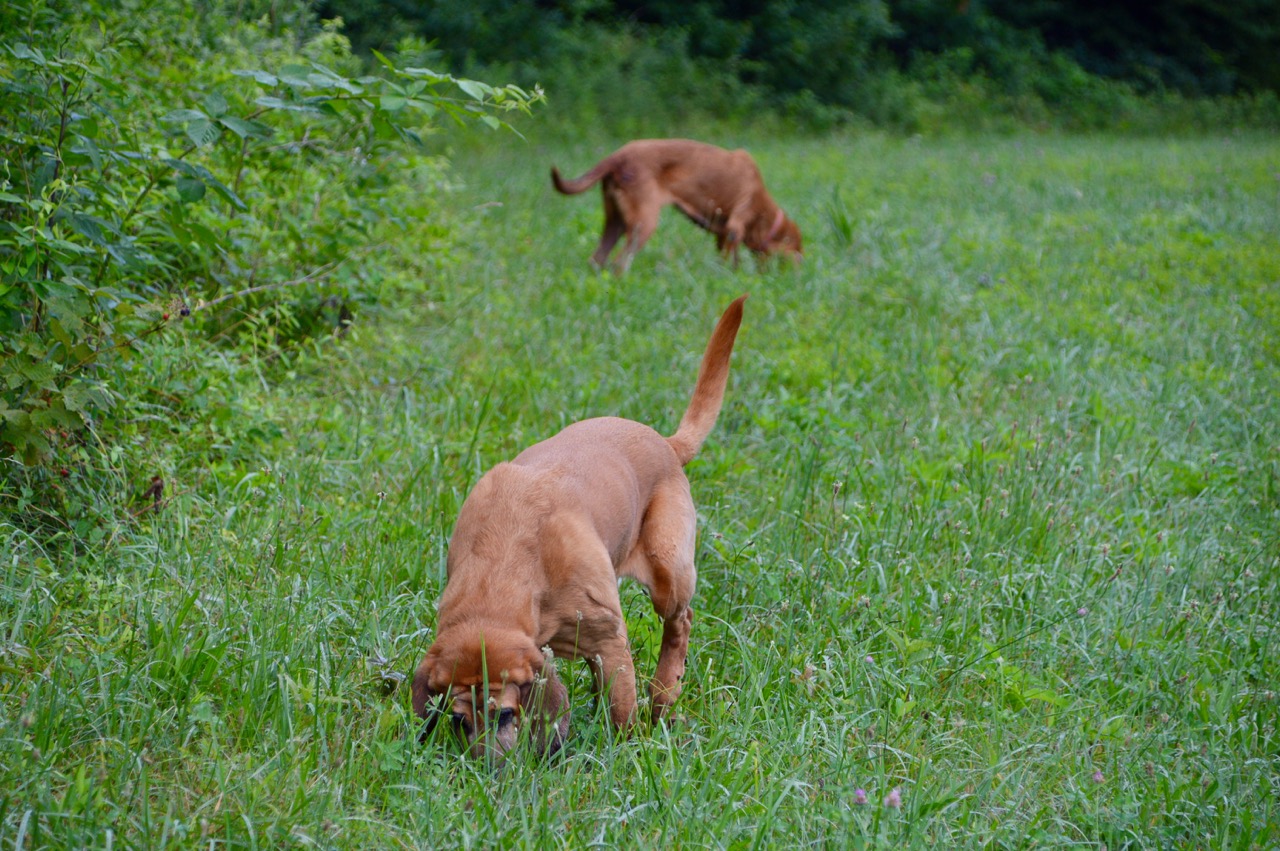 I could tell by now that Stella would not be joining Sadie and I this morning. I was willing to let her do whatever she wanted now that she had changed her location more toward the woods instead of toward the neighbors. 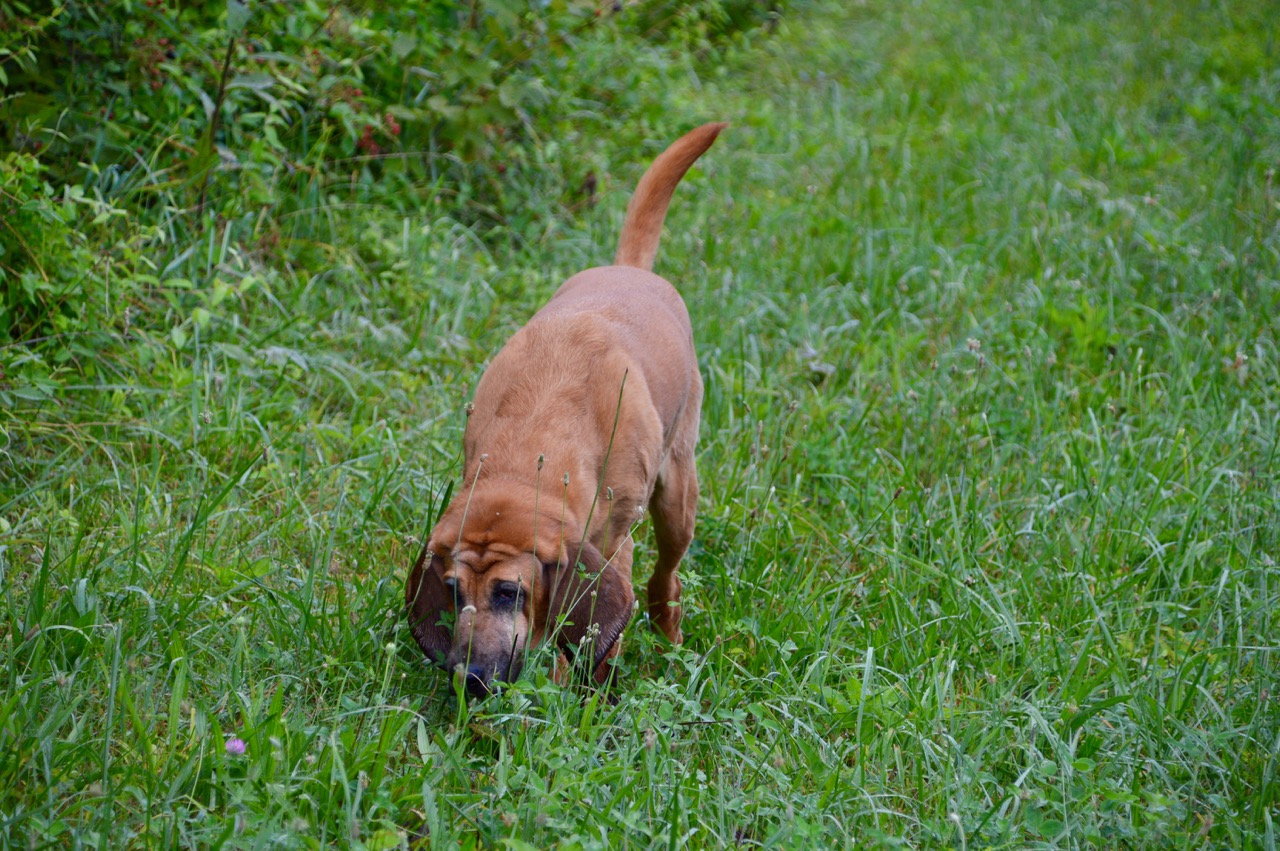 As Sadie made that sound with her jowls as she inhaled all the field offered ... 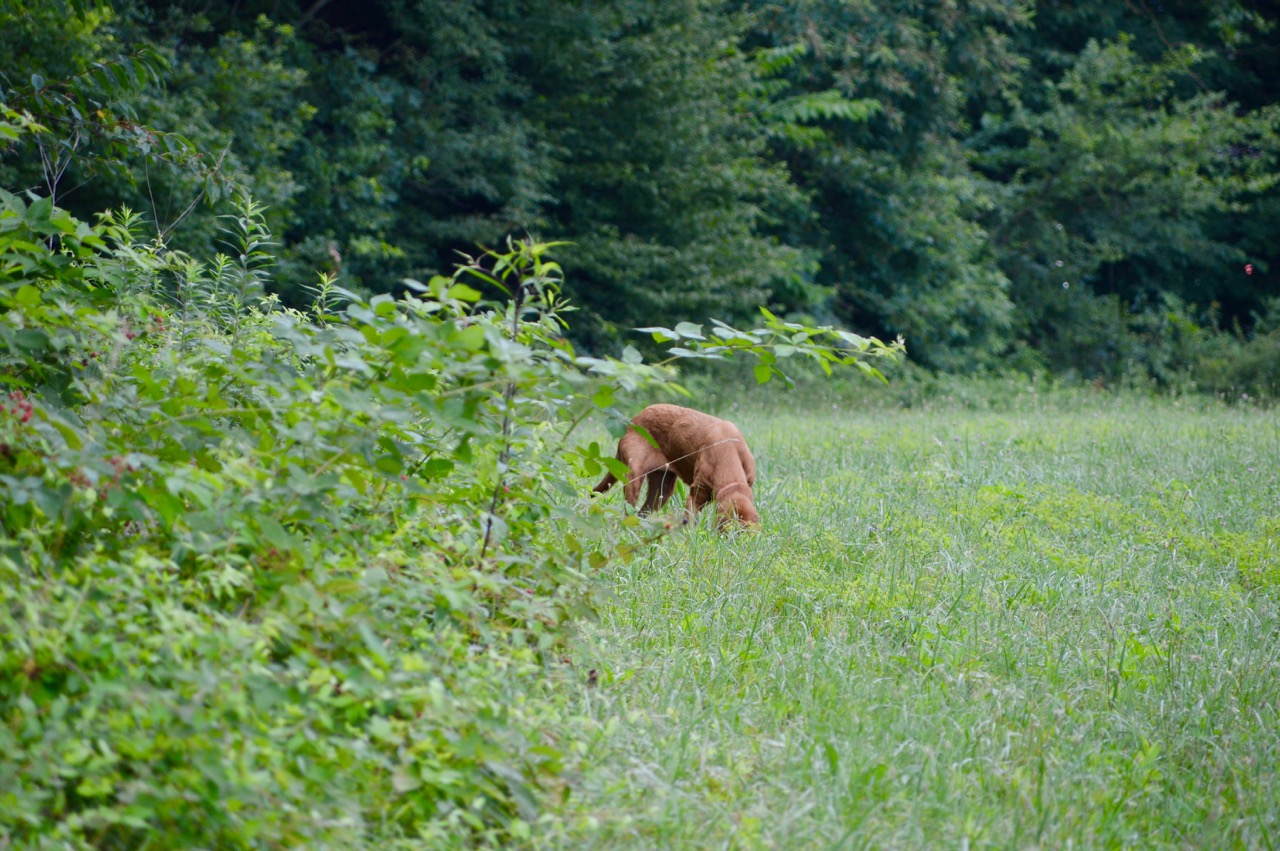 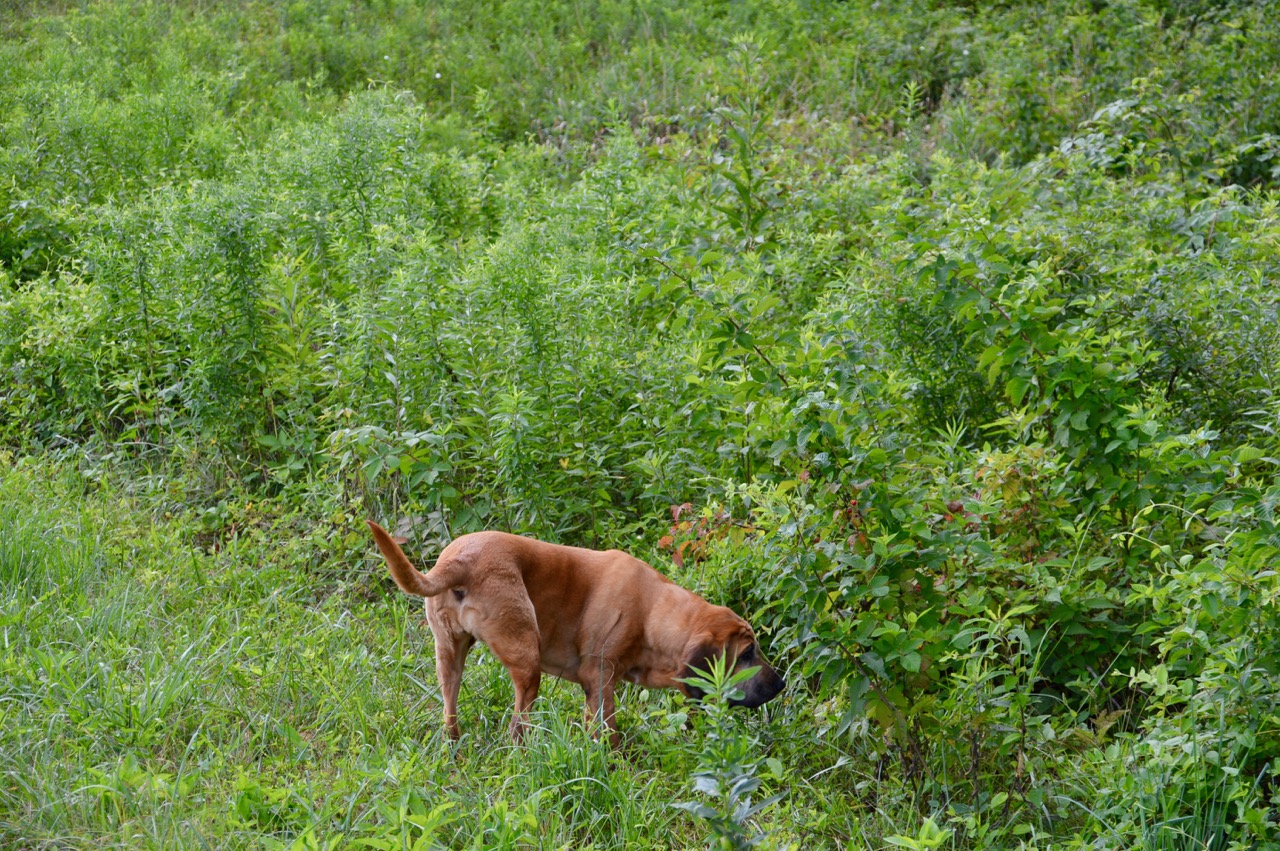 It's right in there where the deer walk in and out of the gully, while some have sleeping spots in that heavy brush. At times Sadie gets so excited she will hop, wanting to jump into the middle of all that brush. 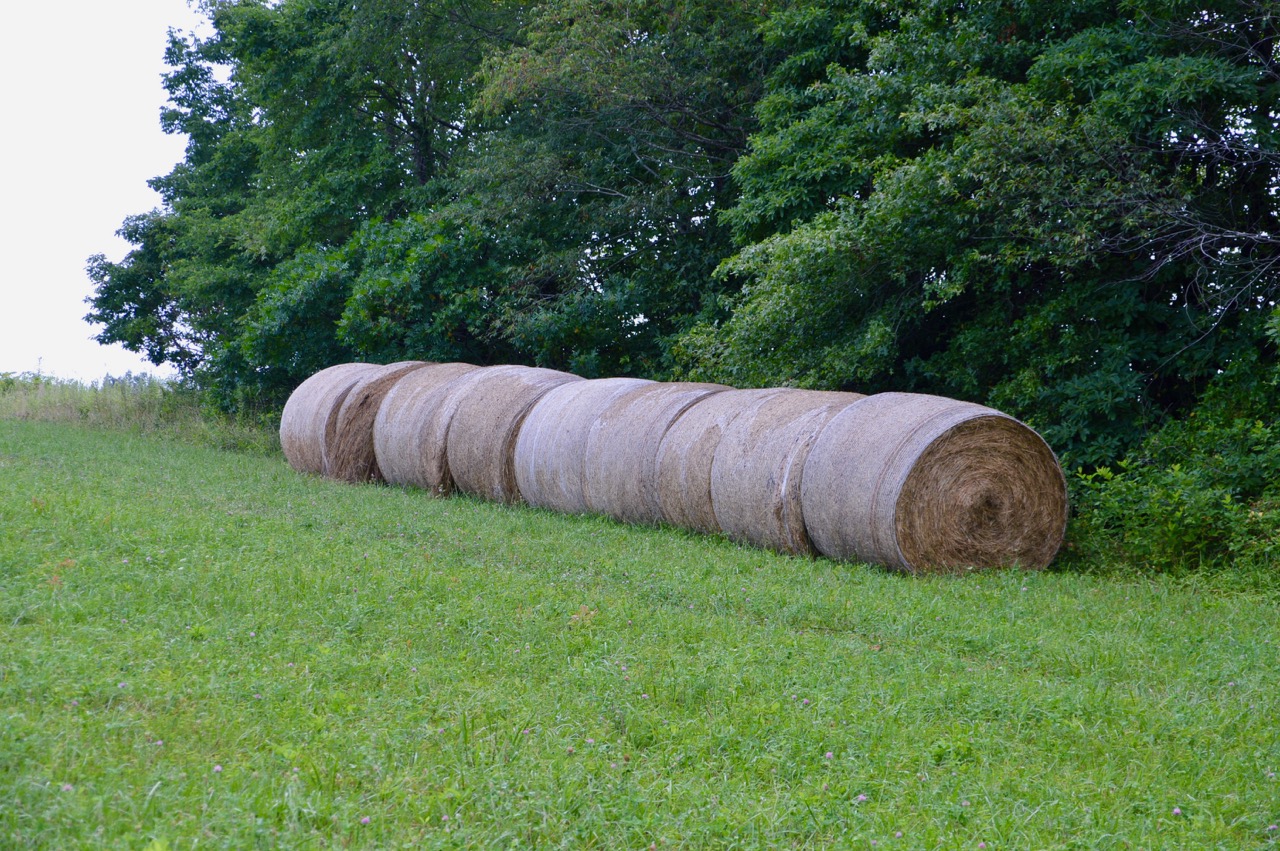 By the time I am almost to the back edge of the field, the smell of wet hay fills the air. That's a small amount of hay they cut this summer. Basically they only had about half the number or rolls they normally get in a cut. I am pretty sure they will be back in September or October to bale whatever they can so they will have enough to feed their cows in the winter. 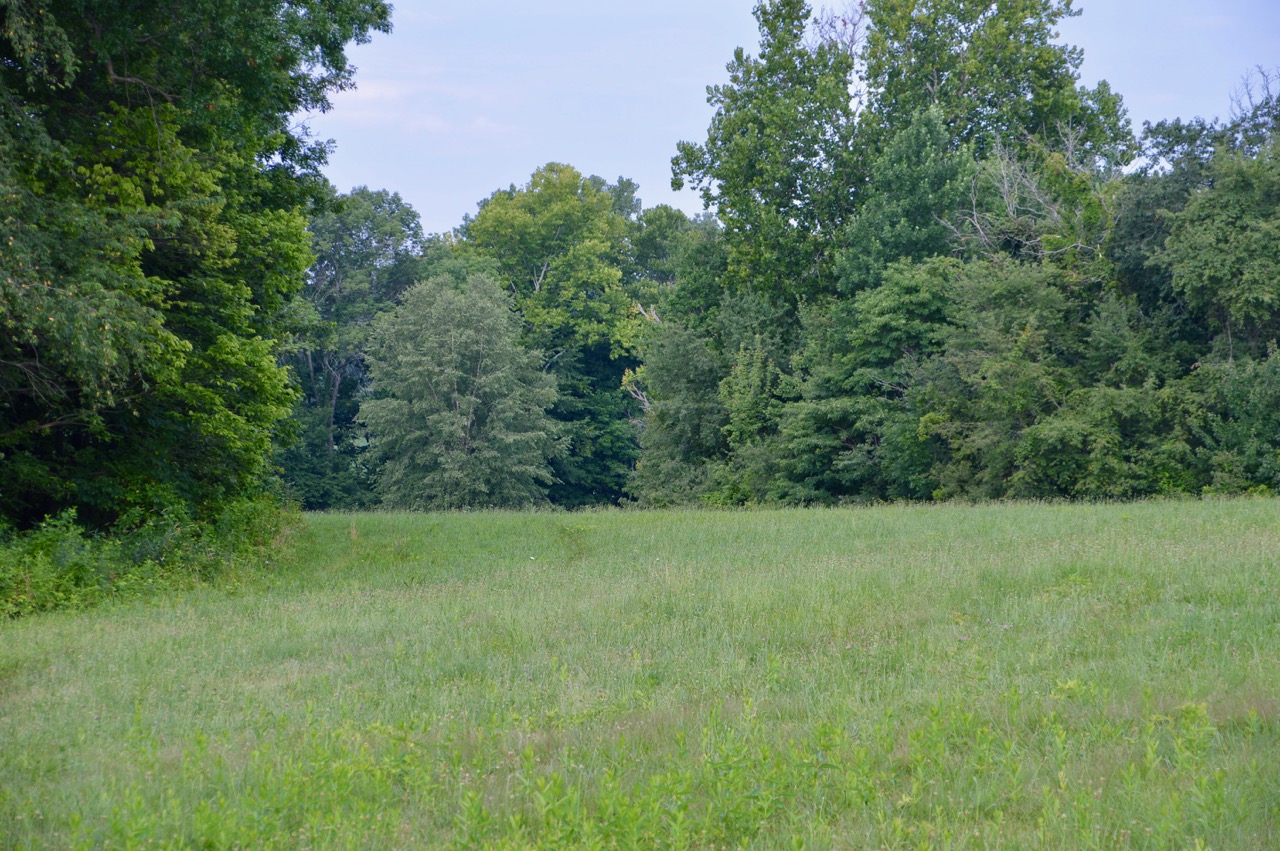 As expected I didn't see any signs of Stella as Sadie and I walked the back edge of the field. I assume she was over the small incline and out of sight over by the woods behind the neighbors house. That is where the extremely large field cat lives. 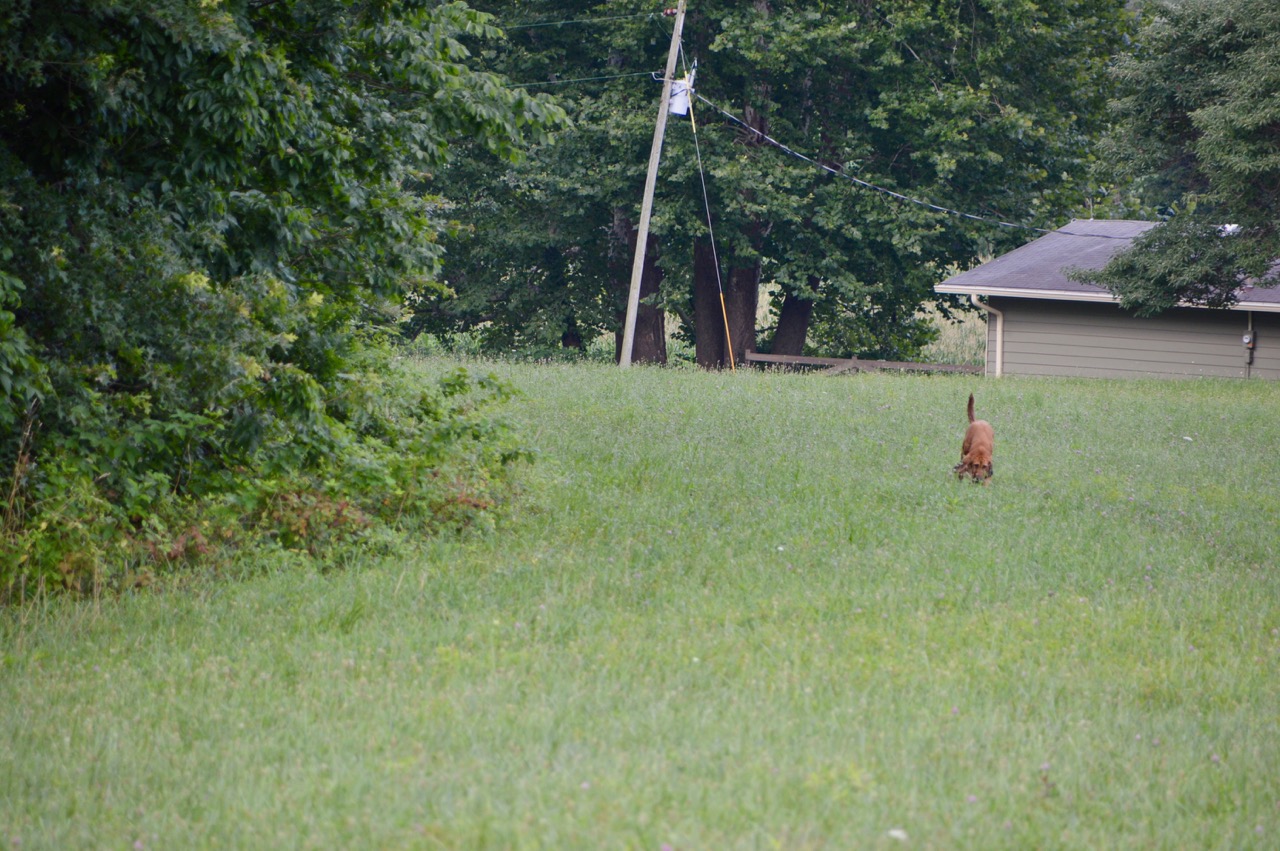 I was almost shocked when I saw Stella walking out from the area I had left her. She had not moved and was tracing my steps long my path when I called her name. 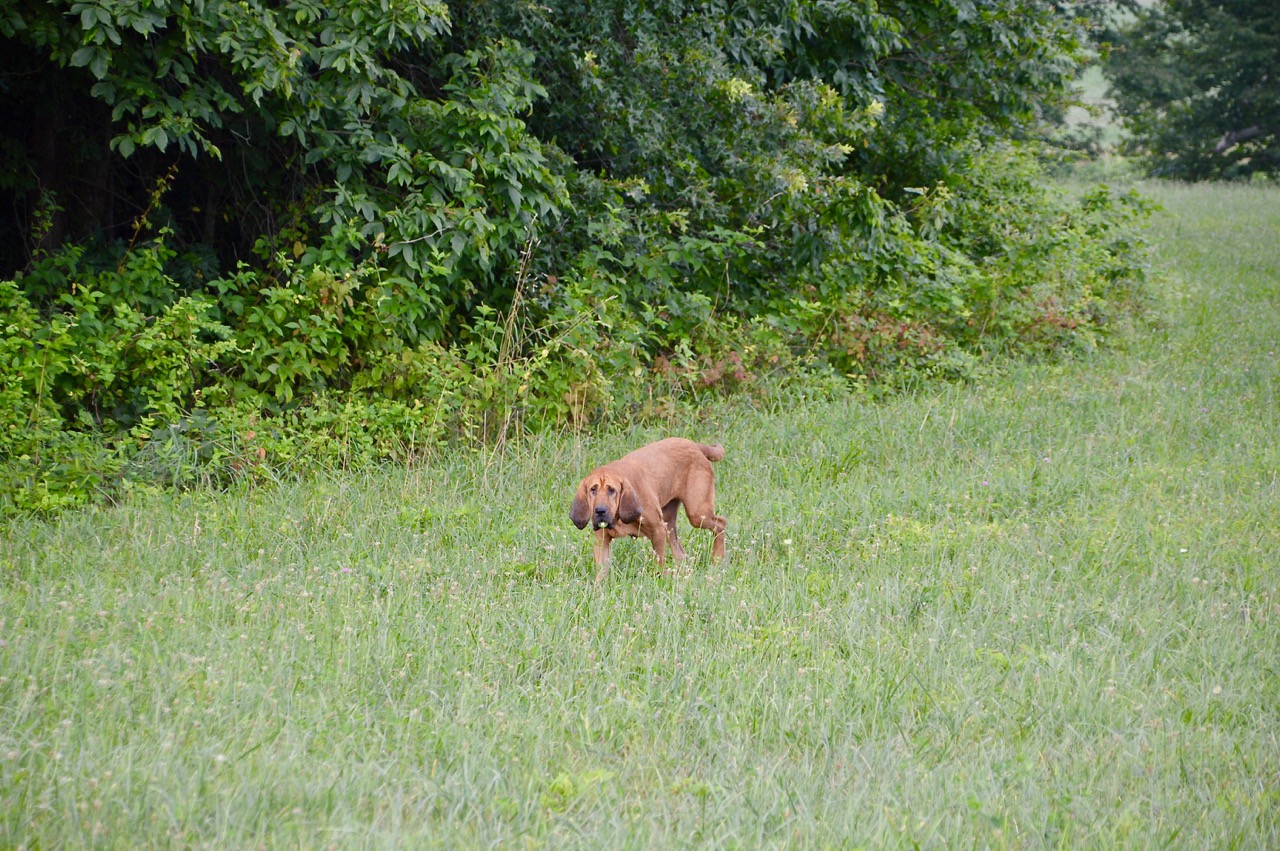 Once she heard her name called she started walking our direction slowly. 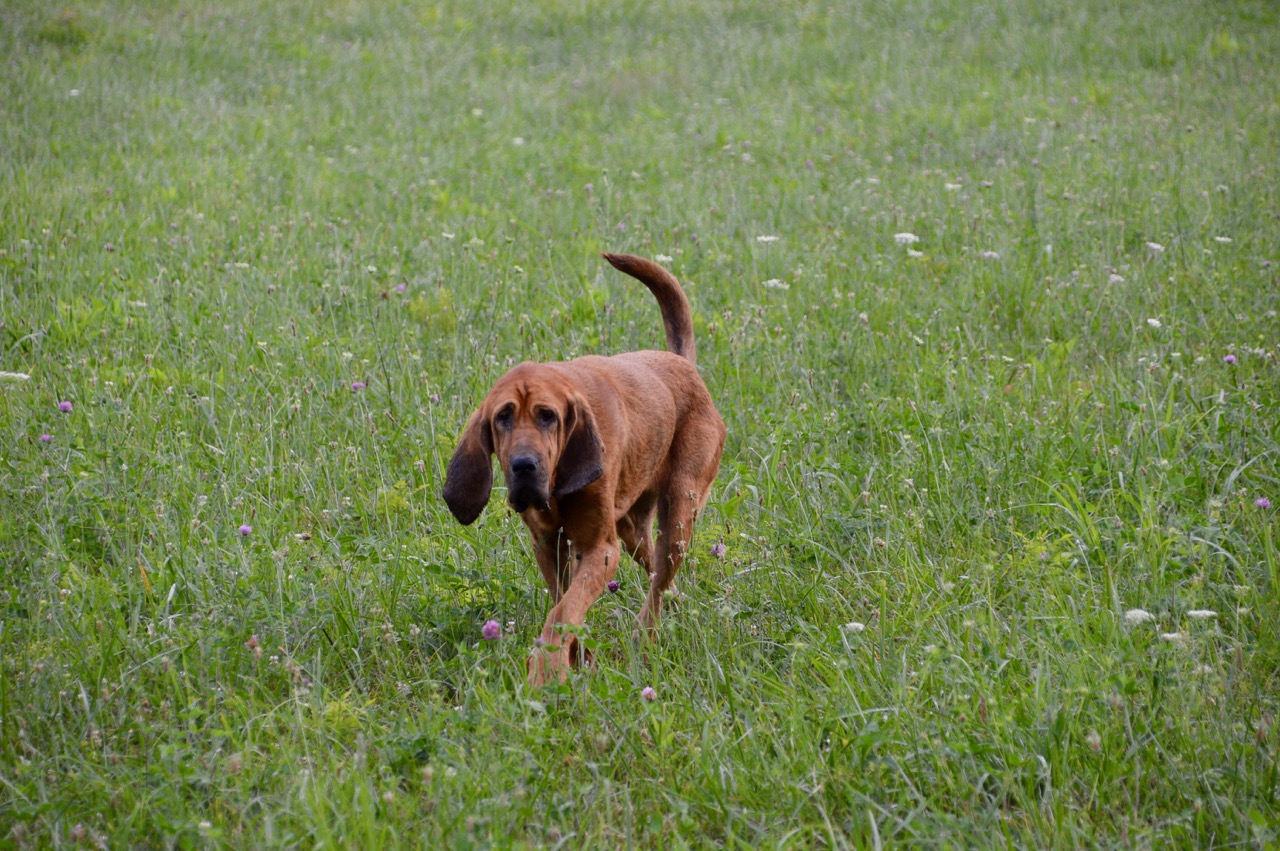 Nothing like getting a look as if to say "what's the hurry" from her ... she is hilarious at times with her facial expressions. 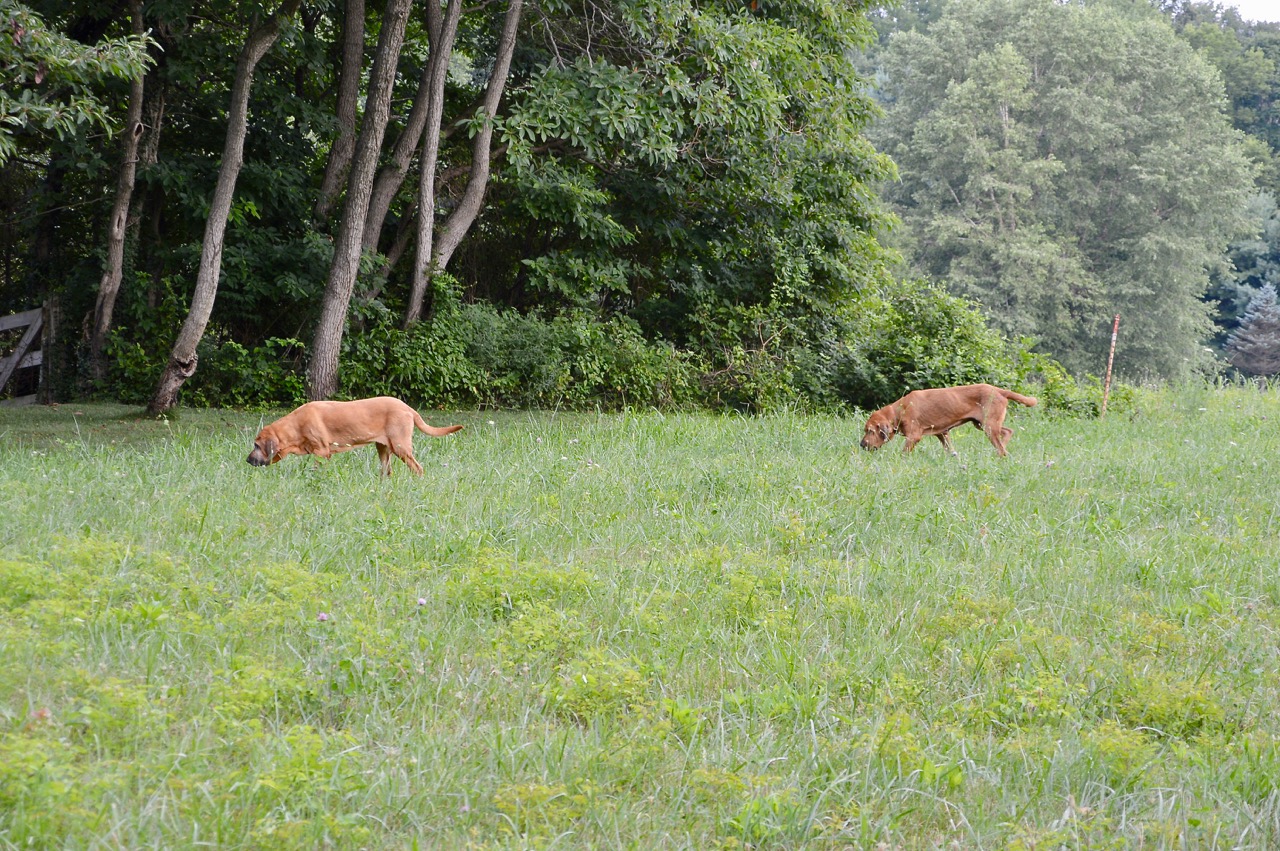 To let me know they are both still in charge around here, not me, they walked their own path home at their own speed ... cutting the field in half and walked diagonal towards the north end of the yard. 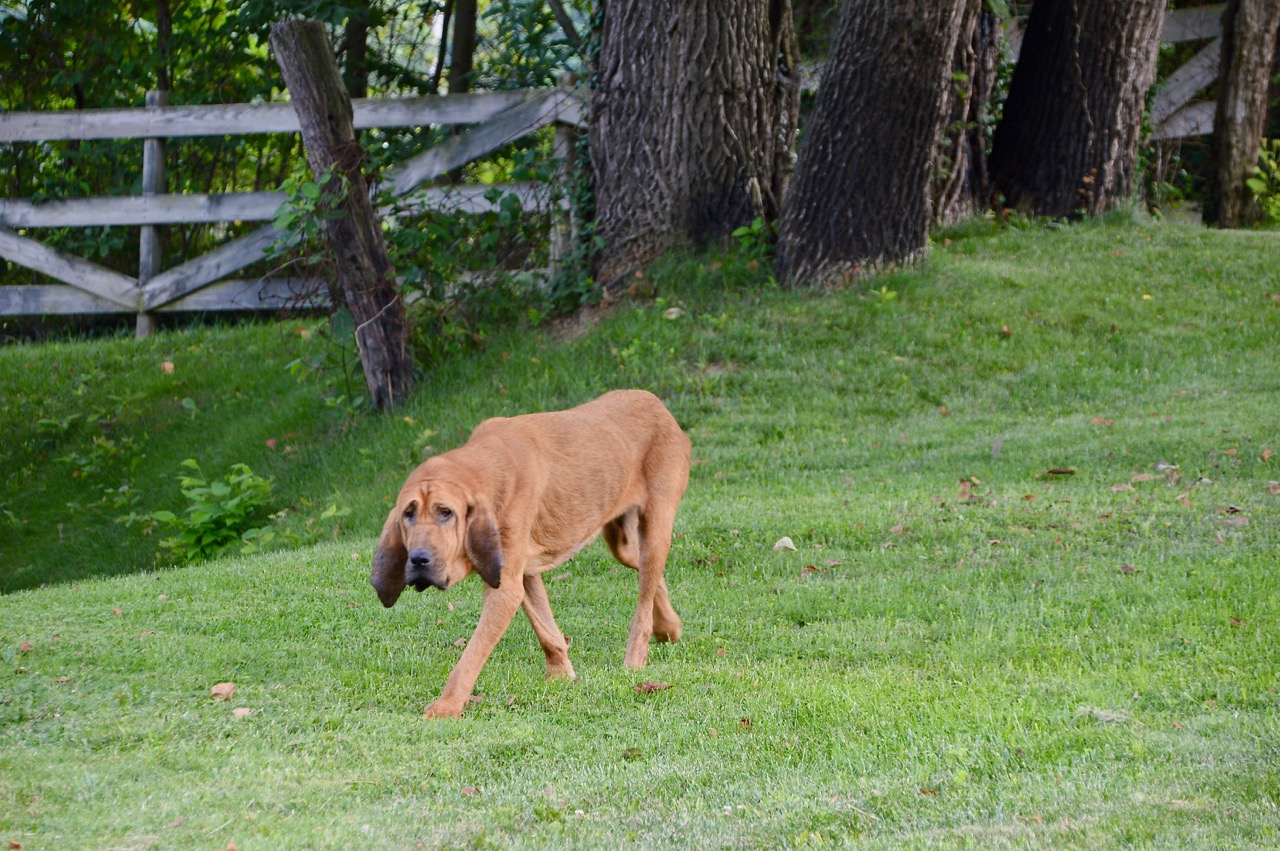 After so much strenuous exercise this morning Stella will sleep next to the the floor register that pumps out air conditioned air until she is ready to eat her lunch around noon. She will howl when it's time for me to serve lunch.

Soon after we arrived home, it felt like rain in the air and the skies clouded over. Wunderground is telling me thunderstorms are possible by 4:15pm. I've heard that before with nothing happening. Since getting all my normal tasks done this weekend my daily activity this week could range between nothing ... and nothing.