The Japanese Yews Are Pulled Out By Mistake !! 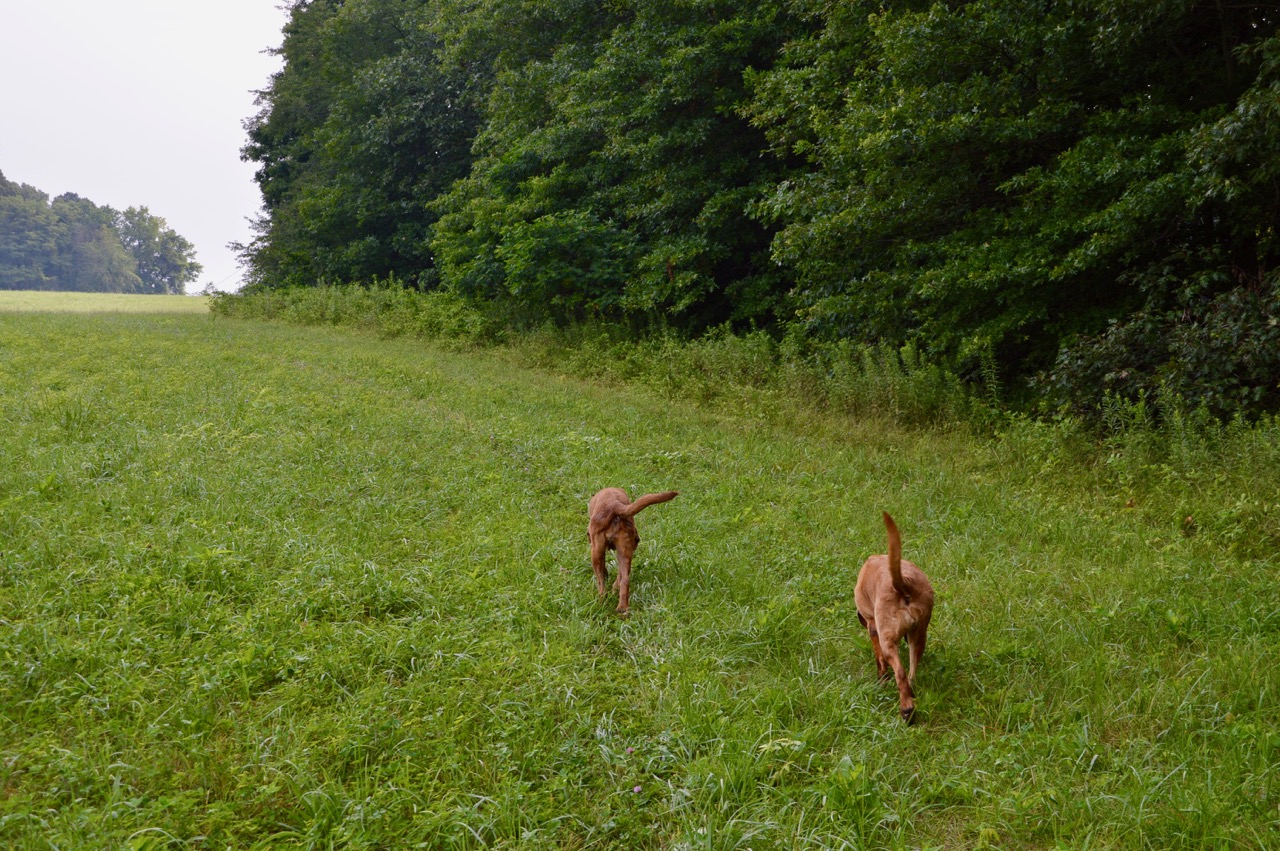 It started like any other morning, except for a couple of changes. The hounds had their walk at the normal time but I was headed to Bloomington to buy some dog shampoo for Stella and an Epson printer ribbon for me. Little did I know what a shock I would have when I returned from my trip ... Not until I returned and pulled into the driveway did I see that the Yews were in the process of being pulled out of the ground and taken away !!!

I'll include the photos of the hounds from this morning's walk but this story about the yews may be too long to wait until after the hounds pictures to start what you are waiting to read about. 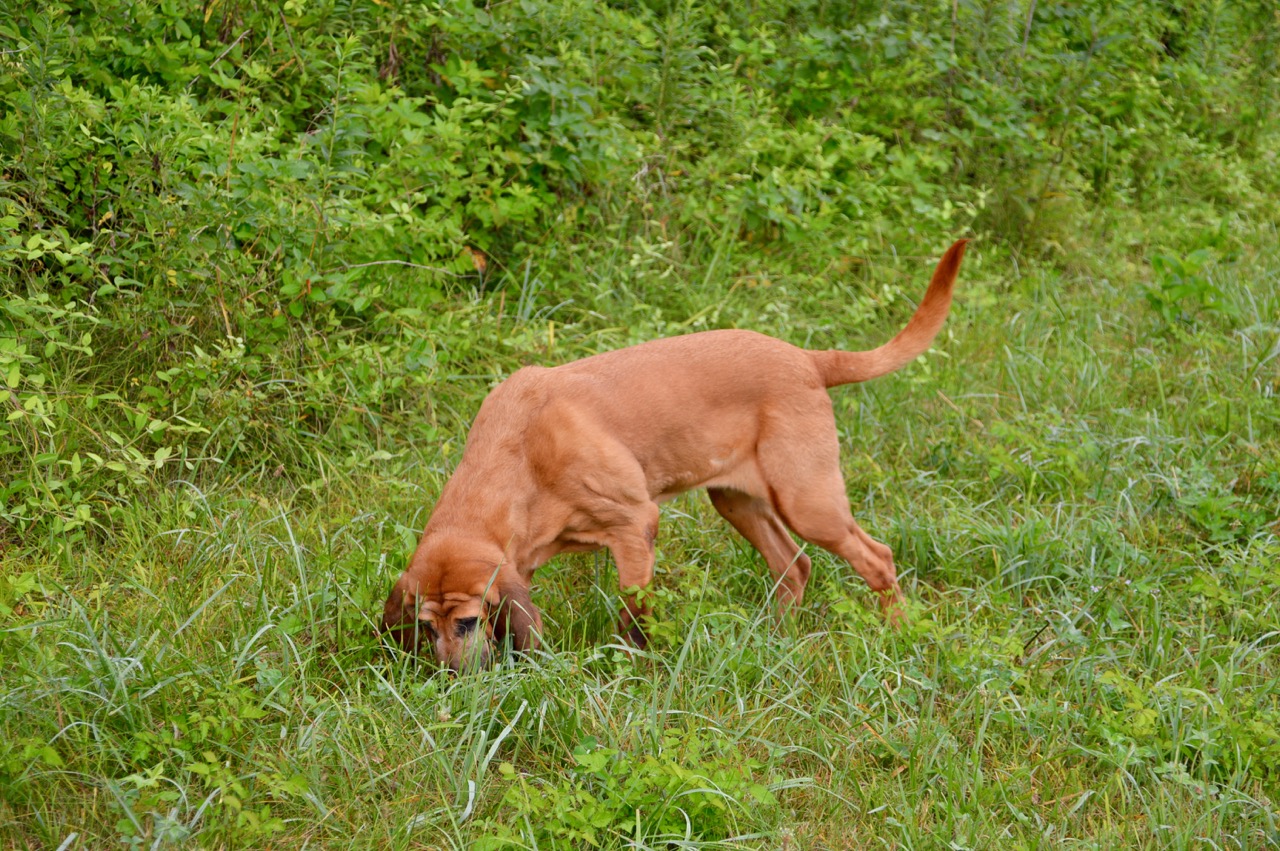 I've mentioned as recently as last Saturday of having the landscaping business bring up their small John Deere tractor with a bucket/backhoe and pull out, then take away the Japanese Yews in front of my house. I've discussed the 'why's in past posts so I'll not talk about the reasons for doing this. 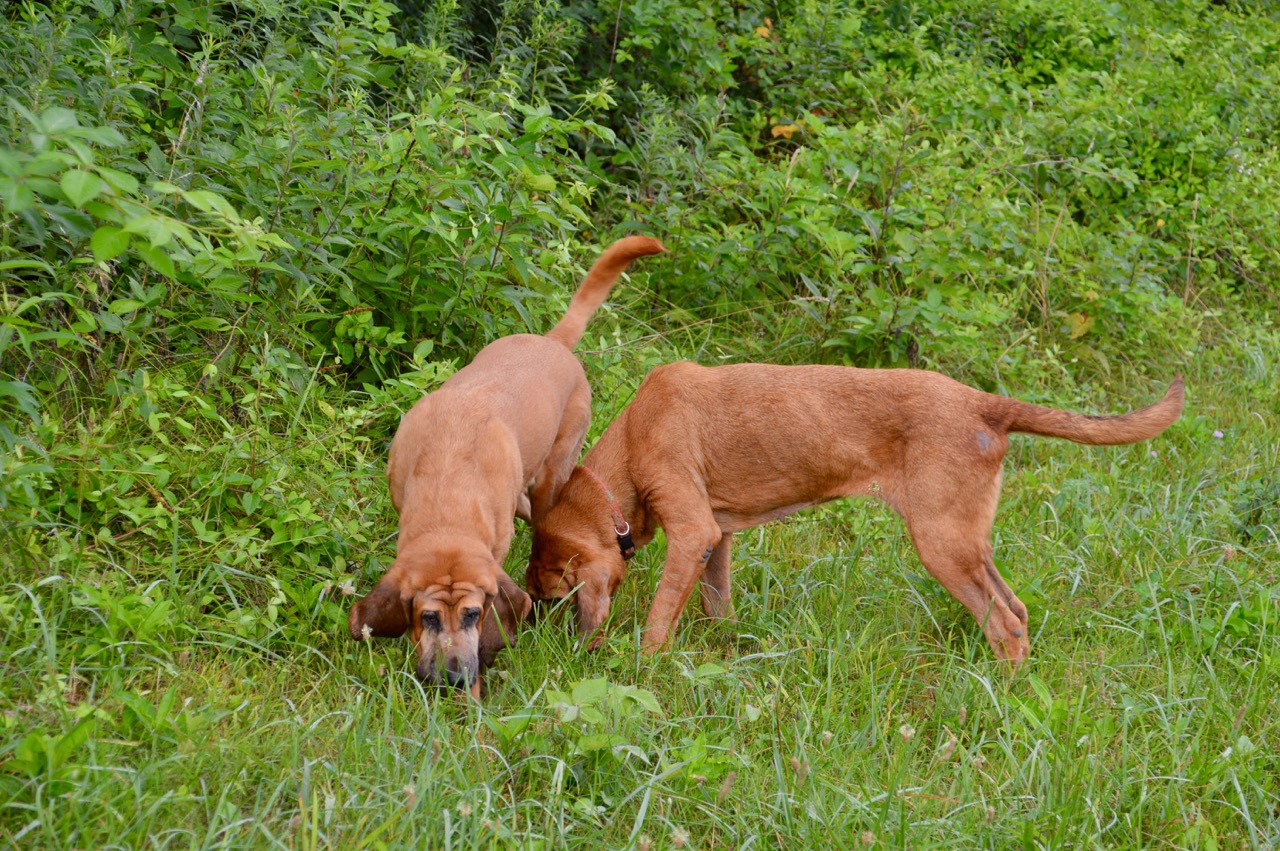 I was not even finished trimming the Yews on Saturday where I had to pull out my pruning shears to cut through thicker stems. My electric clippers could no longer cut through some of the stems, for the first time ever.

I knew then as time went on there would be more stems becoming thicker and the ones I trimmed would be thicker the next time I attempted to trim them. So I made arrangements to have the local landscaping business to pull them out and take them away. 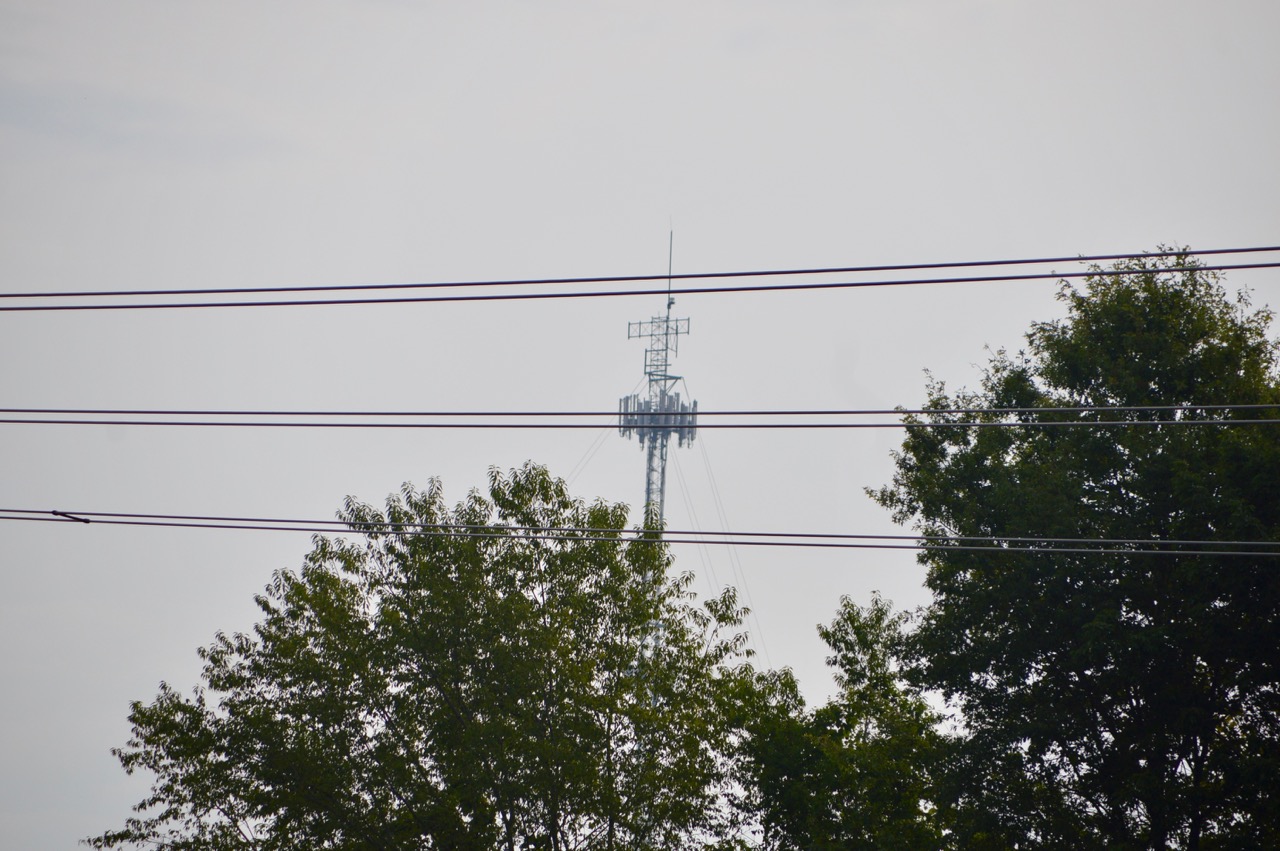 I continued to cut them back on Saturday so I could see what they looked like 18" shorter. I liked the shorter look ... SO I CALLED the landscaping business to let them know to CANCEL my request. The owner, who I had talked to 30 minutes earlier, had gone to lunch. I left a detailed message with the boy at the desk to pass the information to the owner about CANCELING THE REQUEST.

(Ed ... this is the grass that collects the morning dew ... no thistles) 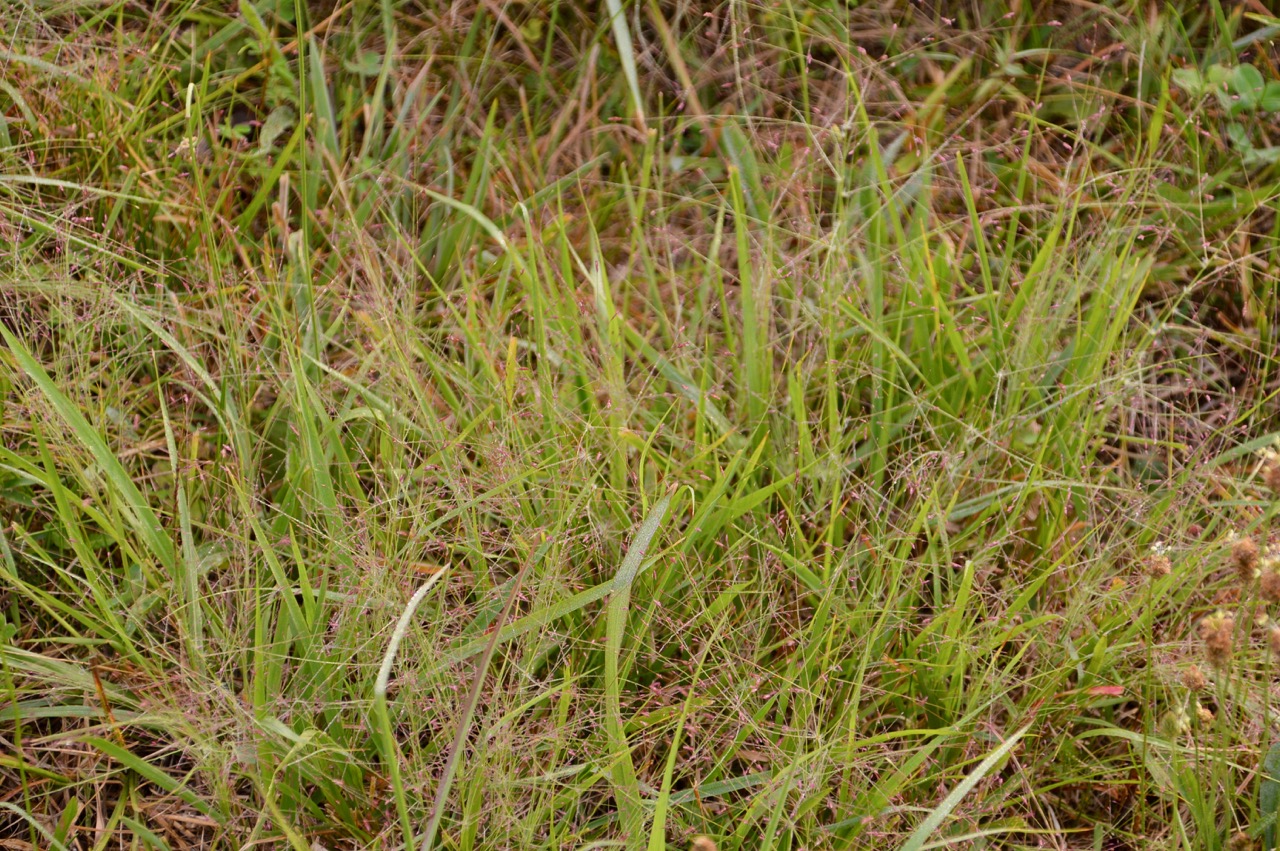 I guess I should have called back and talked to the owner later just to confirm but when he didn't show up later that afternoon, nor Sunday or Monday I just assumed he had received the message to cancel my request. In fact by Monday afternoon I had not thought about it at all until I saw the owner drive by the house after he closed for the day. 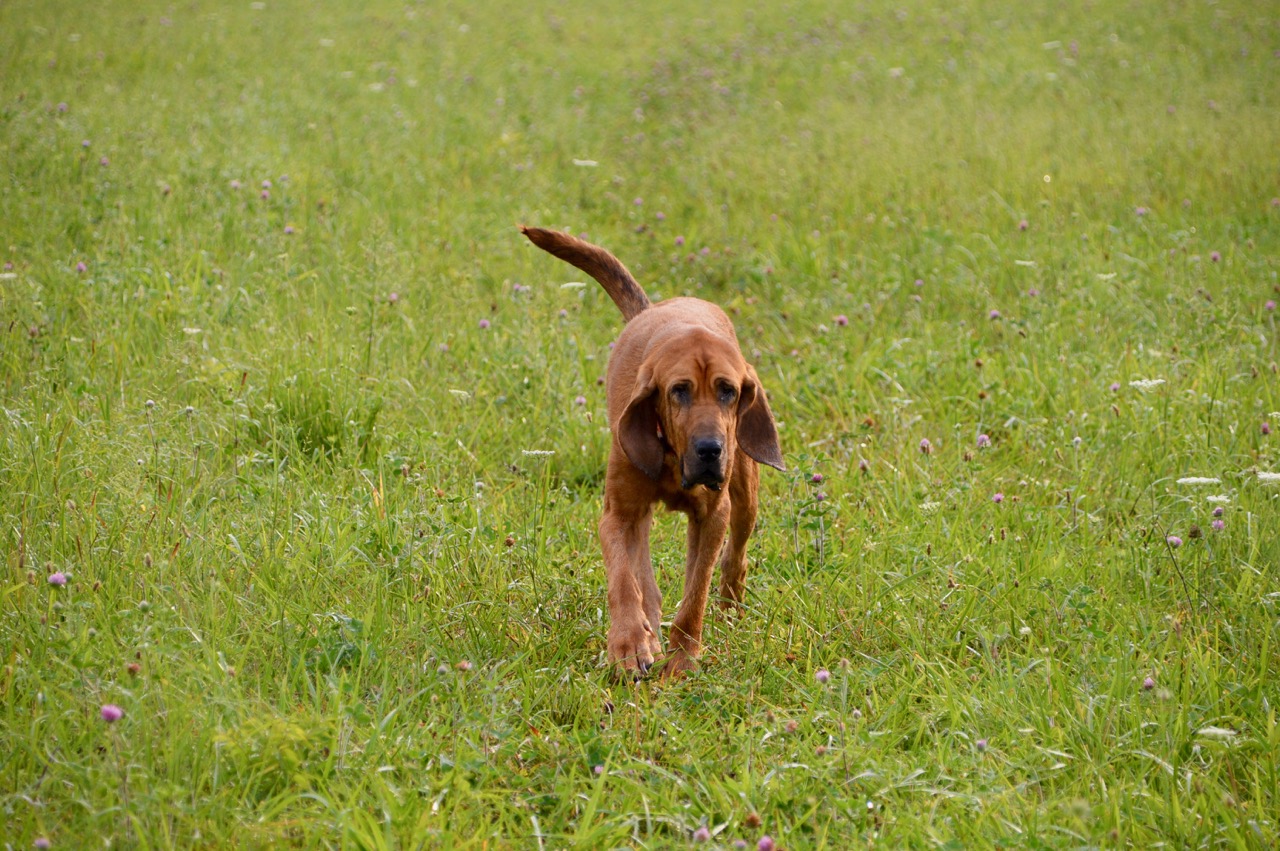 This morning after I had picked up the printer ribbon and hound shampoo, I had planned to waste another hour then eat some pizza for lunch.  One of my favorite on campus pizza restaurants had opened a new location on 'my side' of town.

Something ... made me change my mind and head home then instead of later, after having pizza. 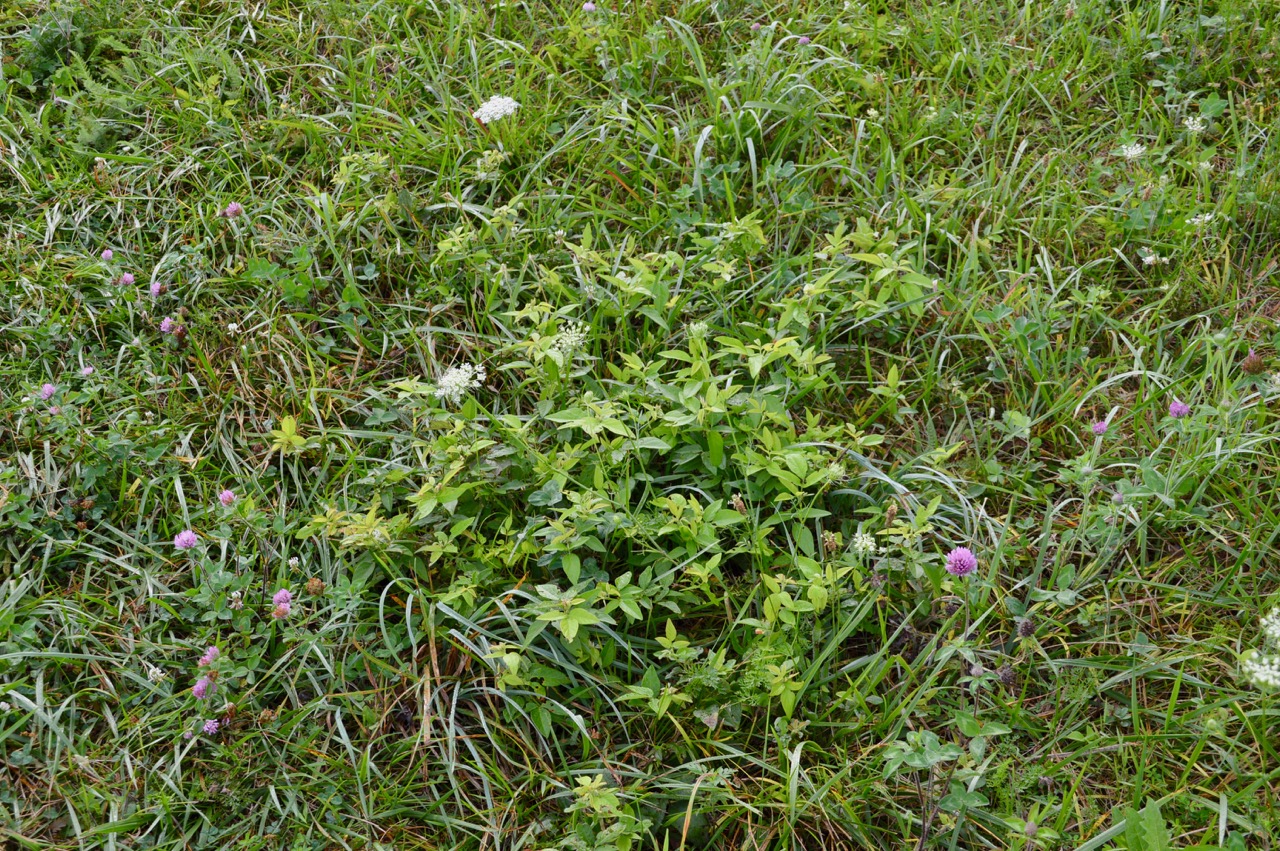 I had to take a photo of Stella at the end of the walk this morning because she NEVER gets to the yard before I do. Evidently it was too hot and she had enough fun and wanted to get back inside with the AC on. 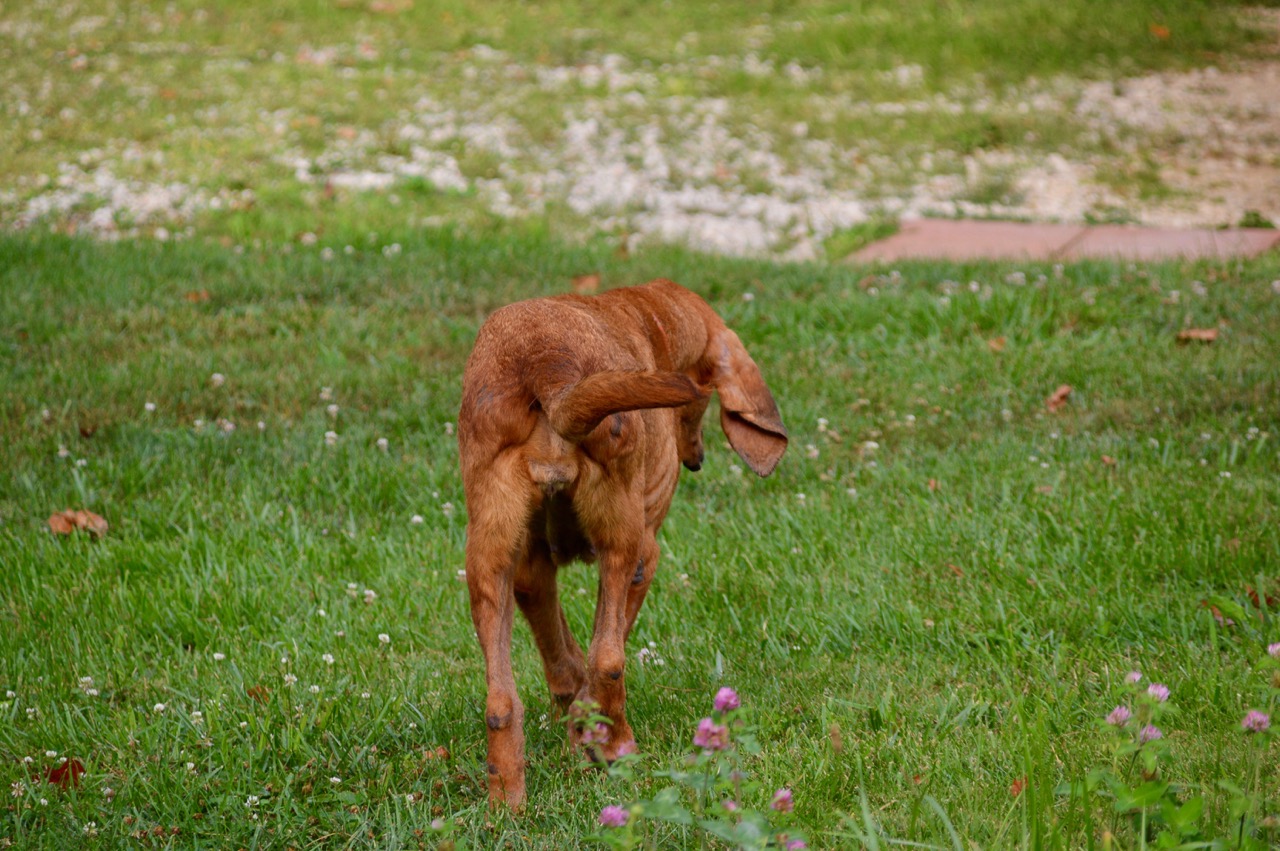 Sadie gave me a look as if she was wondering what is taking me so long to get back to the house. She is also hot at 8:30am and wanted to get back inside with the AC on. 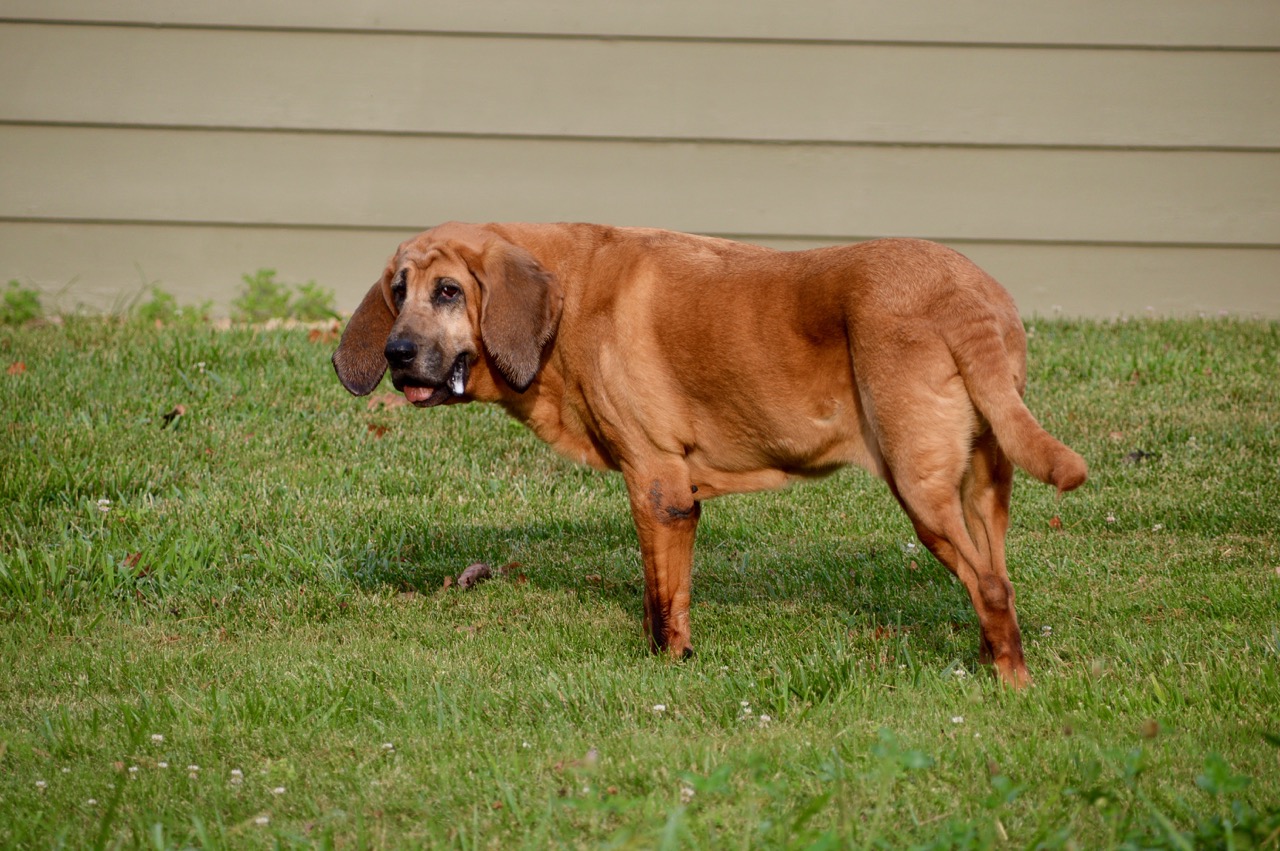 Now one good thing about this "yew story", by Sunday night I had changed my mind again and decided these yews were only going to keep trying to get taller which would mean I would have to spend more time keeping them trimmed back ... still not knowing for sure if their roots could damage my septic tank in future years.

I wanted them pulled out and removed.

I figured I would call the landscape owner in the fall when temps were cooler and have them pulled out then.

So it was quite a shock as I pulled into the driveway this morning to see they had already dug 3 of them out and was gone taking one of them to his property so they would not be a fire hazard on my property. 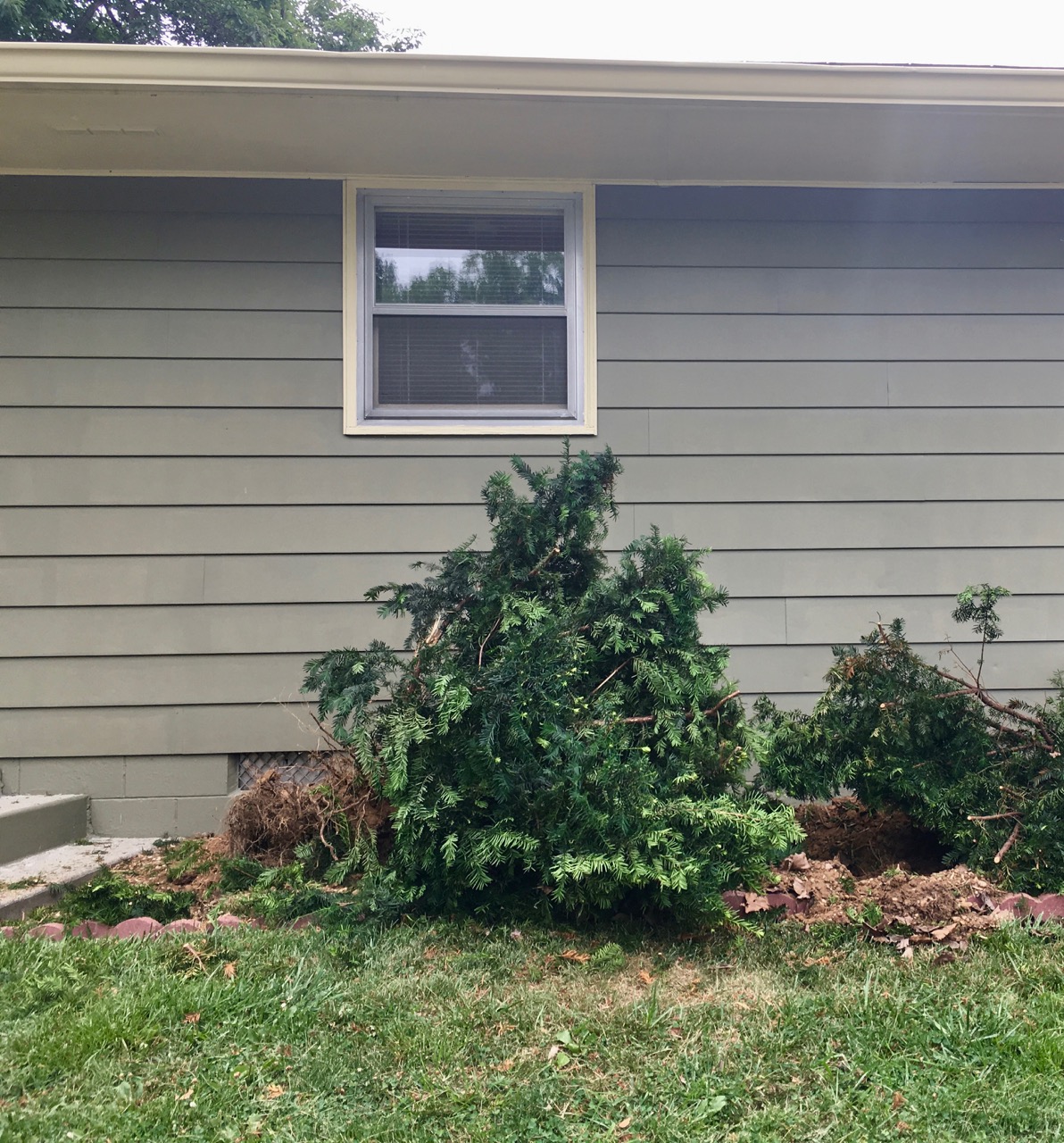 He wasn't sure how deep they were so he dug them out with his small backhoe. Luckily they were not that deep into the ground, so the others he could put a chain around their base and pull them out using his front tractor bucket and take them away all in one trip. 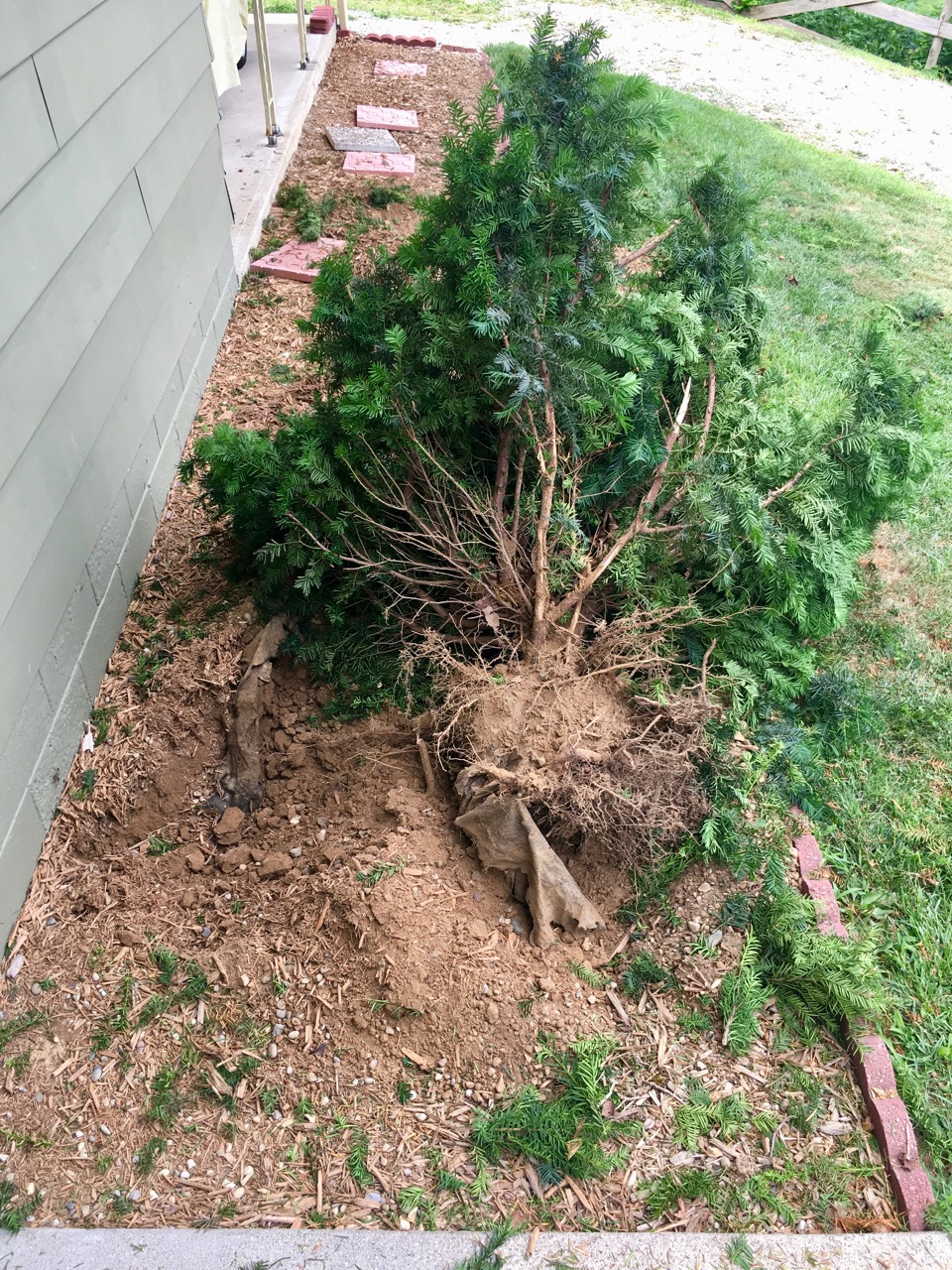 It looks like I have moved some work to the top of my priority list. I'll only work on those remaining roots before noon each day, fill in the holes with dirt, and put down more mulch. Then to add some color I'll plant different annuals but any small shrubs I decide to buy will be in pots sitting on the ground. 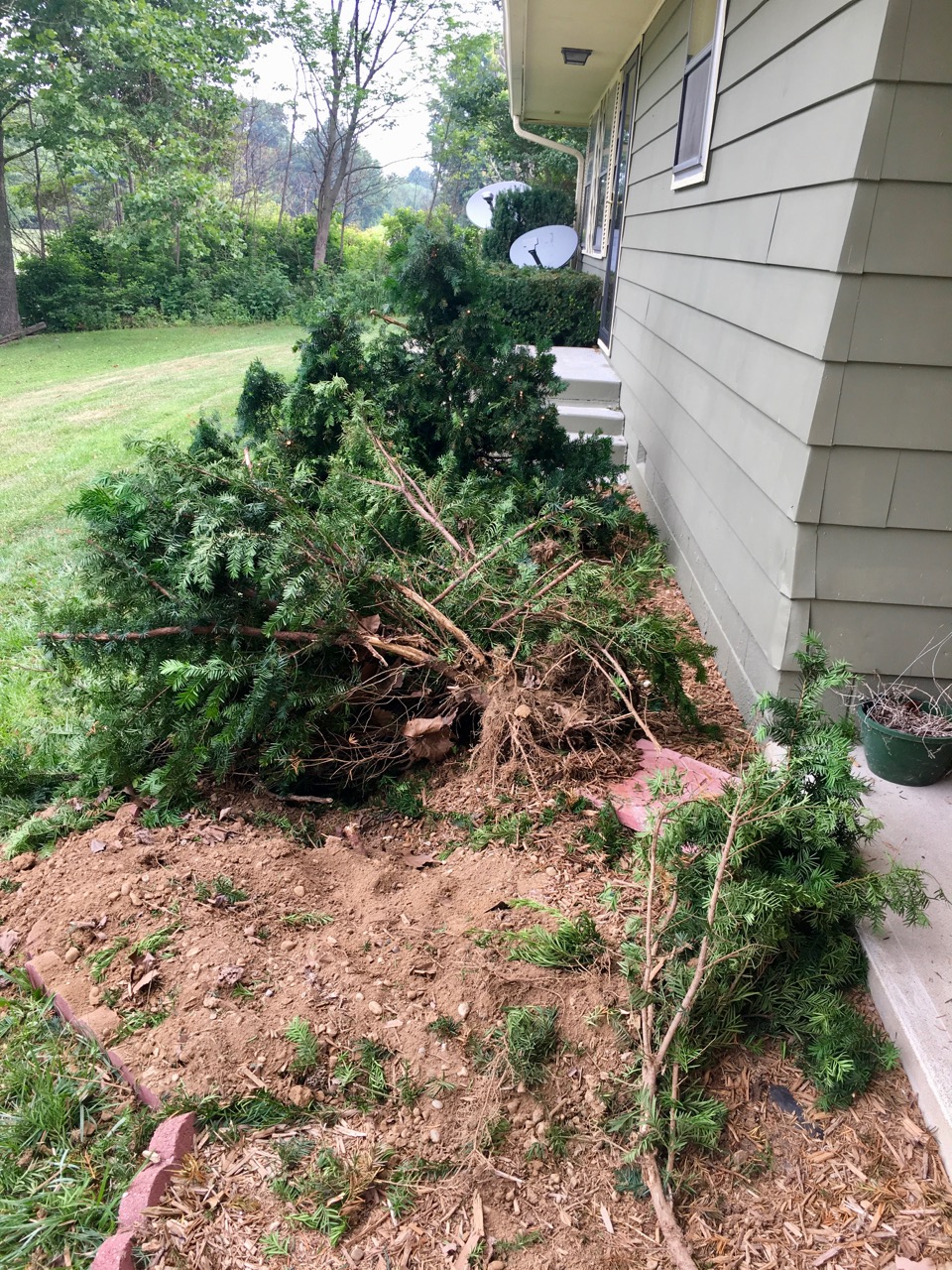 I'll leave the area bordered in as is and will lay some more stepping stones from the driveway to the front porch steps to make a sidewalk, even though the front door is never used. At least it will look better since the steps point that direction. 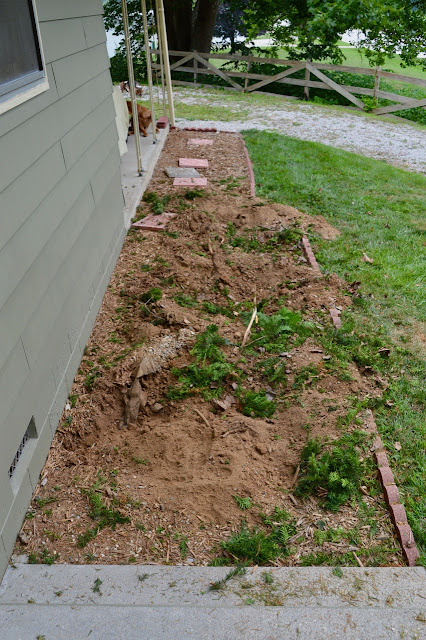 I had decided before I decided to pull any of these out, that I would have all of them pulled out. They would not look good just leaving one side of the porch full of yews and the other side empty. The tall one had to be removed because it was beginning to take a weird unattractive look as I trimmed it around two different satellite dishes to keep the shrub out of their 'line of sight'. 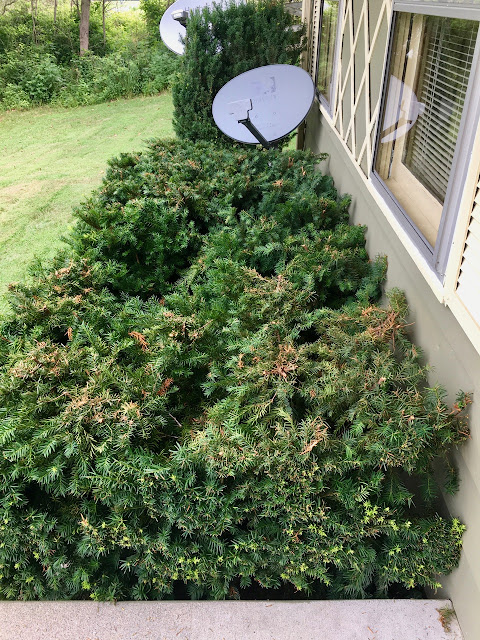 It was good that all the Directv cables went directly from the mounted dish into the foundation to under the house and not underground. He did not have to worry about pulling up any cable wire when he pulled the yew out of the ground. 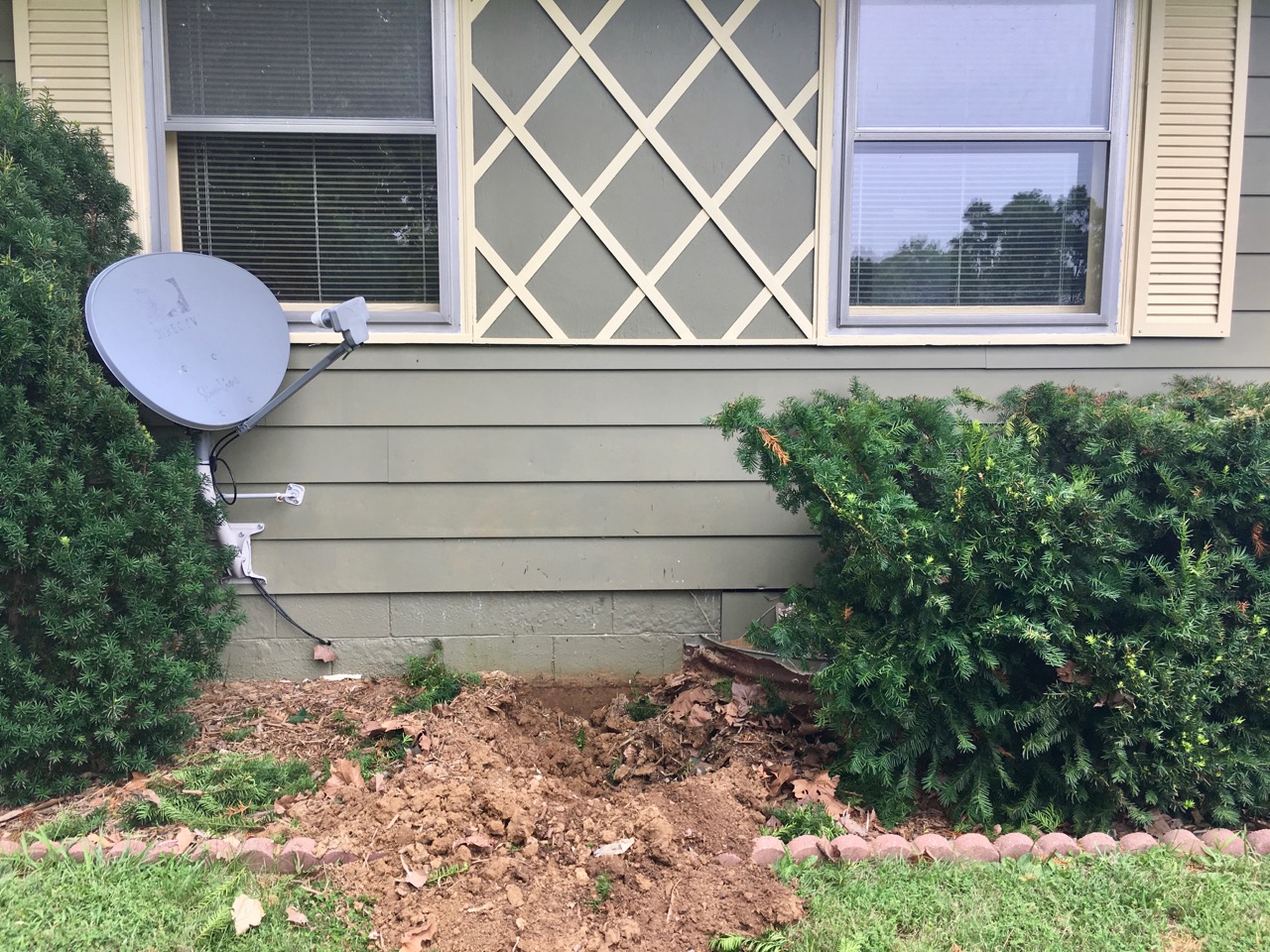 You can see the area that lets me get into the crawl space of my house. It's not really a 'crawl' space but a huge 'moon crater' where you can almost walk standing up under the whole house. I need to get under there to inspect some things. 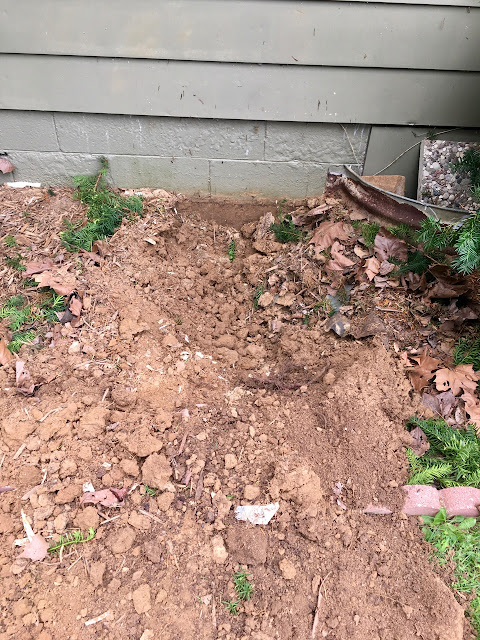 Once again I will put some large potted plants in this area to hide the culvert and as much of the Directv dish as possible. Maybe I can move outside the box and agree that all flowerbeds do NOT have to be level, then cover that culver with some added mulch. I'll plant some annuals and cover the rest with mulch. 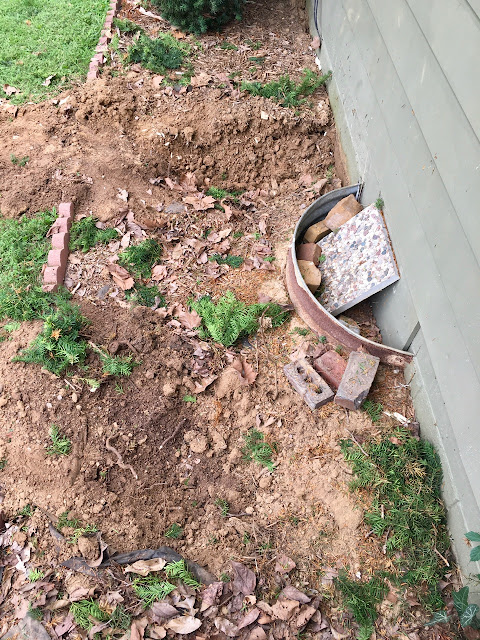 I don't like having the Directv dish right there in the open and mounted to the house but it's only for it's survival and my sanity. Years prior, the satellite dish was mounted to a pole in the front yard to get a clear southern view it required. Yet, every few years straight line winds, high wind storms and possible tornados would destroy the Directv dish mounted on a pole in the middle of the front yard. So far so good in this location after 9 years of storms. 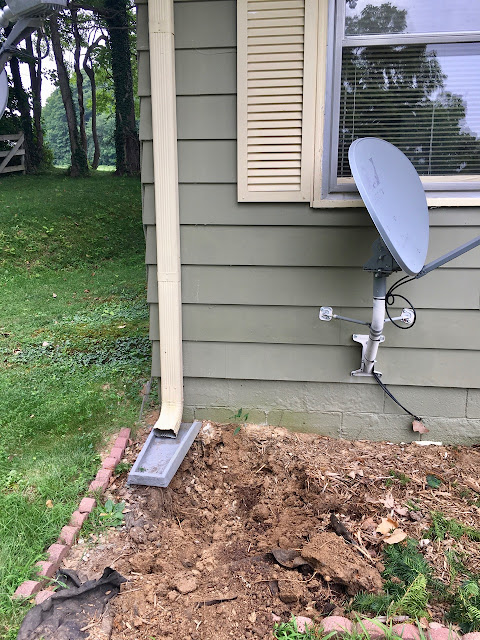 It's quite a hole to fill back in but the landscape owner will bring a tractor bucket full of dirt for me to use where all 6 yews were planted. 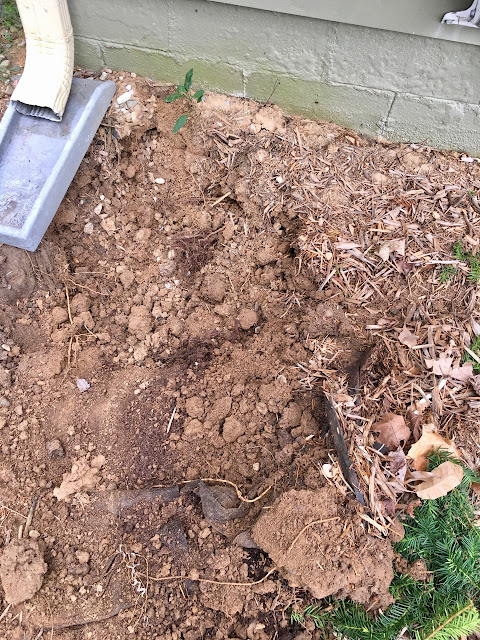 It does look quite different. I'll not want it to look this way long, so I have work to do whether I wanted it or not. Only between the hours of 8am - 11am. 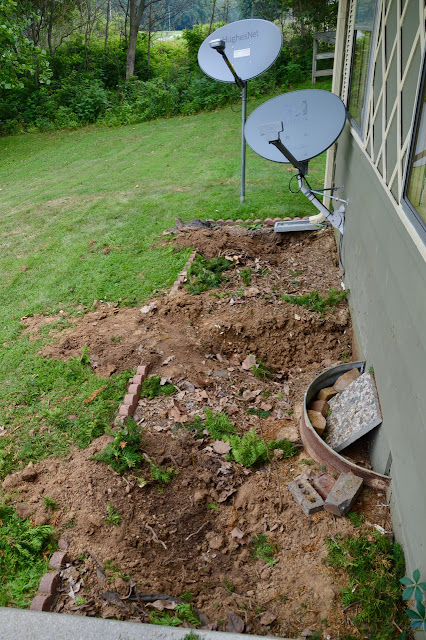 With Sadie and Stella shut off in the bedroom while I was gone, they heard all the noise outside but was not let out to inspect until he was completely finished and gone. Heidi will be lost without her Yews to hide behind in the winter or bad weather when she relieves herself. 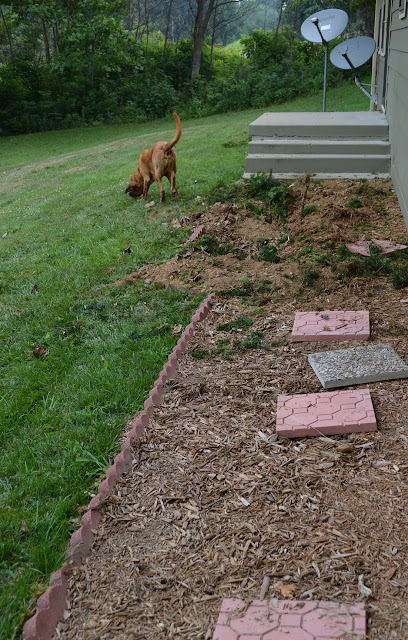 The house is back to looking too naked. I need some ideas from all of you plant and landscaping experts. I want to get the new changes implemented as soon as possible. I need color and plants/flowers that require minimum maintenance. 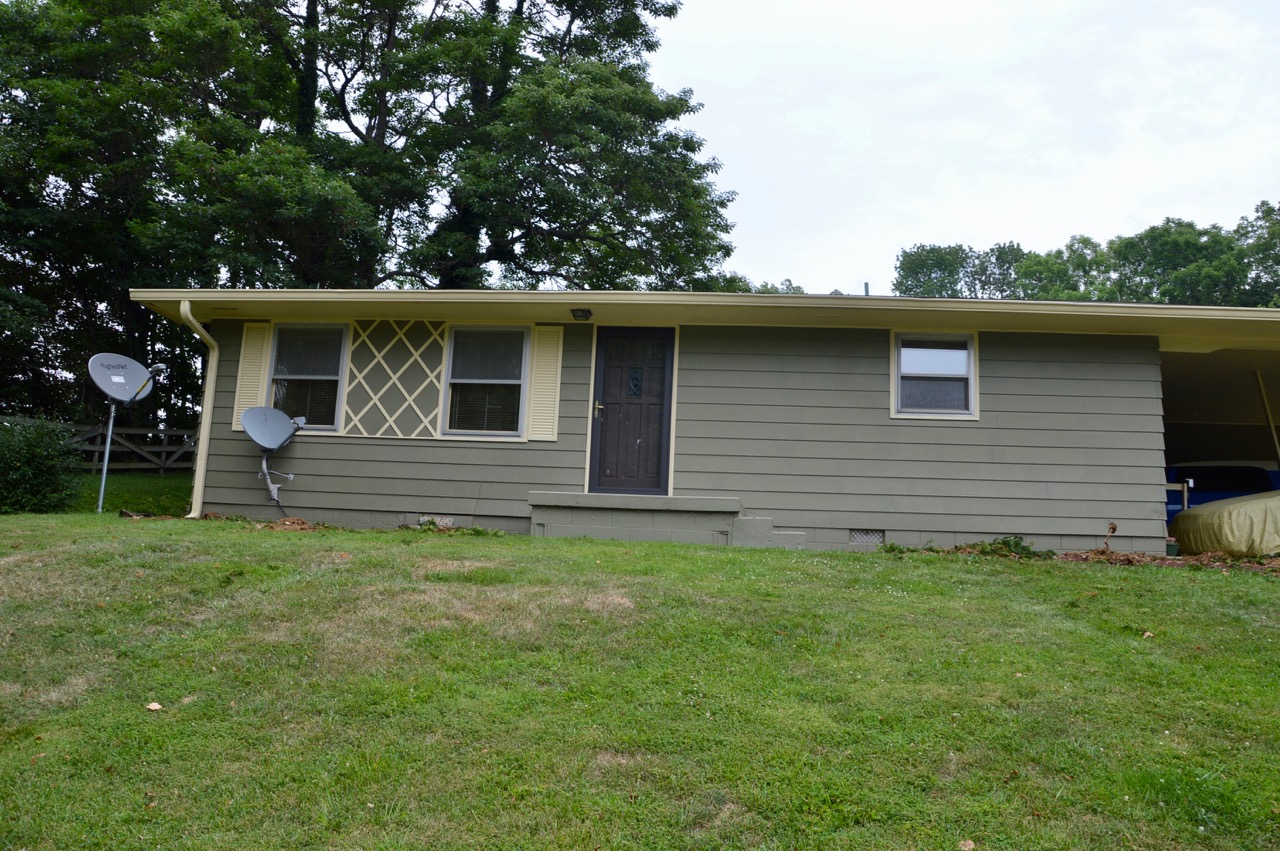 I will be looking at different landscaping ideas again. I'm never able to make up my mind on what to do with things like that. That was one reason I planted the yews ... it was easy.
at July 20, 2017