It Wasn't HughesNet Gen 5's Fault -- Our Internet Service Was Out 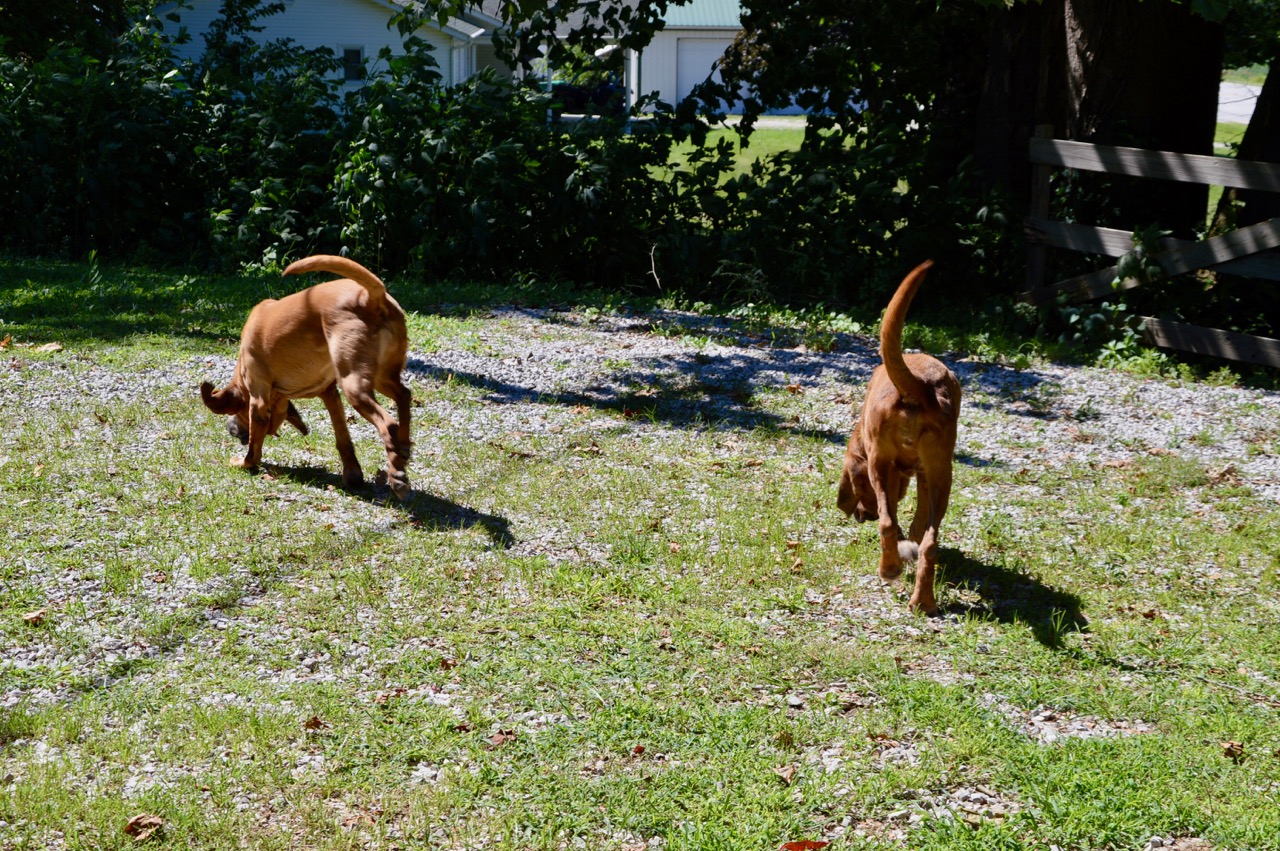 I did not notice it storming Thursday night after I had moved to the living room away from the computer. How could that be, since it looked like it had stormed when I took Sadie outside around 10:30pm? The Reds game wasn't going well so I turned off the game and started reading a book ... only to fall asleep for an hour. Only when I went back to my computer around 11pm and could not get any websites to load did I realize I had a problem. I had lost my internet service.


I'll not go into the whole story. The same installer showed up Saturday morning for the service call that was called in by HughesNet. He also had installed my very first internet satellite system called Exede 3 or 4 years ago. When he changed my system this past April to HughesNet he used the same coax line that goes from the modem ... under the house ... and out to the satellite dish receiver. This morning he found out the line was bad, not the radio receiver on the front of the dish. So I am back online after a day and a half. It was a nice break from my internet addiction. 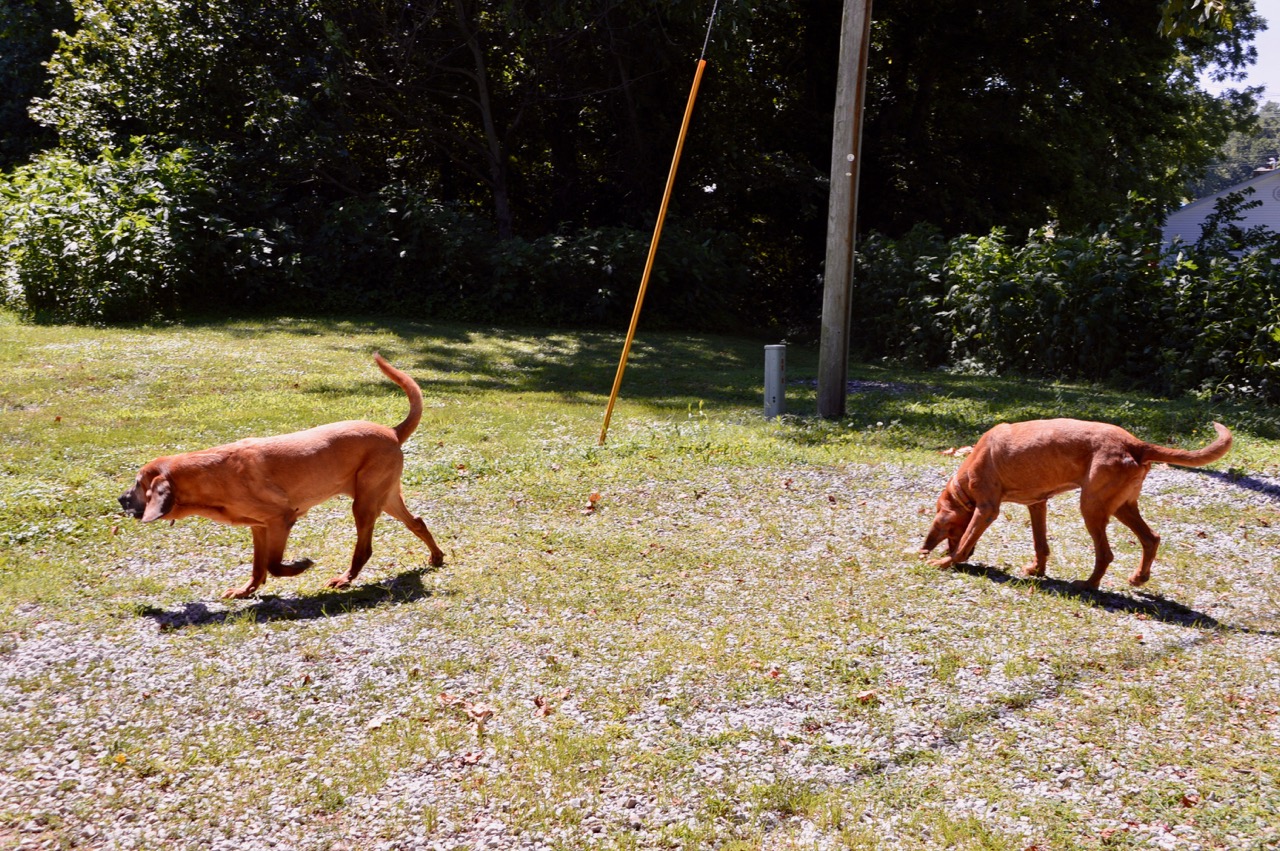 With the baby gate keeping Sadie and Stella in the living room while the two men did their work, the hounds were pretty excited to get outside after the techs had left. Of course they had to double check those footprints and van tire marks scents before we could go on a walk. 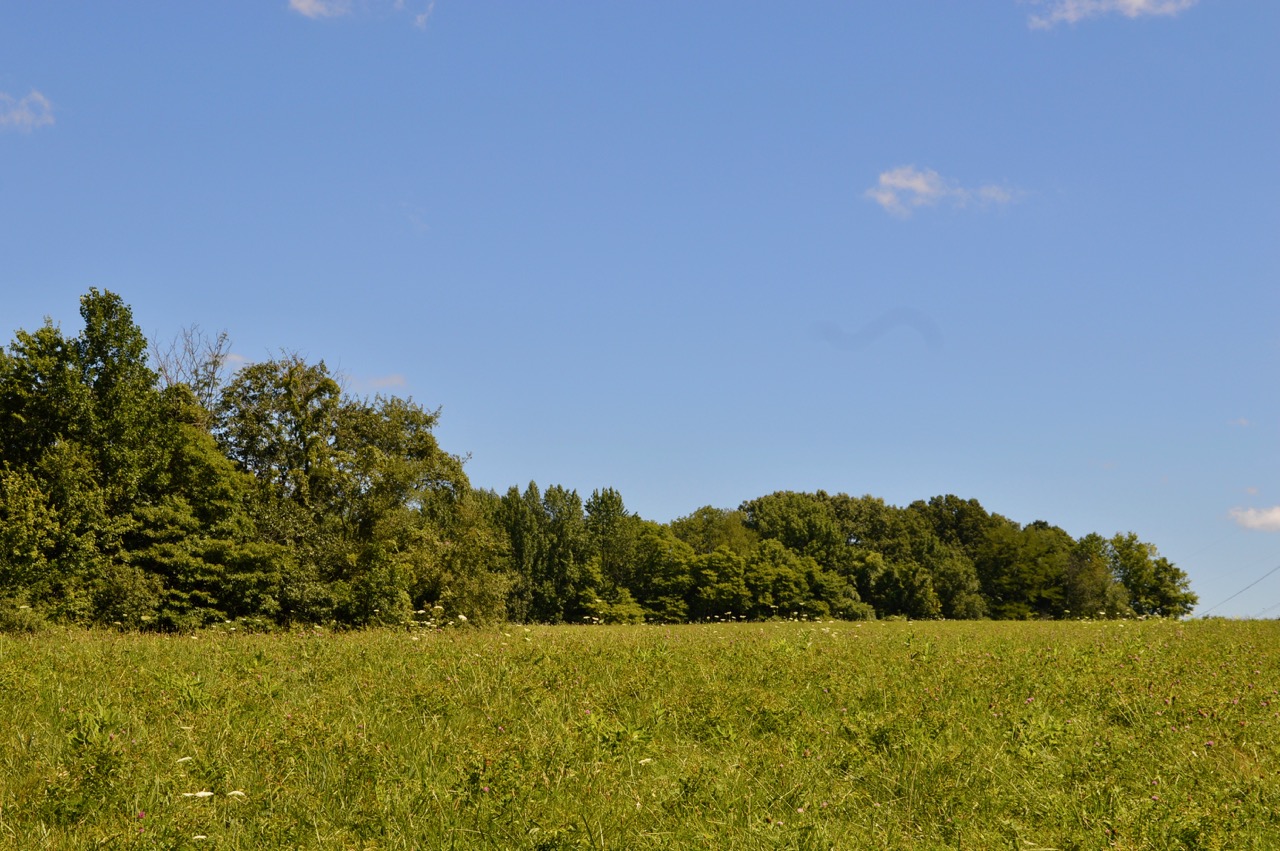 How the temperatures ever dropped to the low 60's this morning is beyond my knowledge base but I liked it. It will eventually get to 80° by late this afternoon but in the meantime the AC is off and all the windows are open with a solid breeze from the SW.

It was so nice outside that even Heidi decided to join us for part of the walk before she turned off to do her own thing, while Sadie, Stella and I walked on. 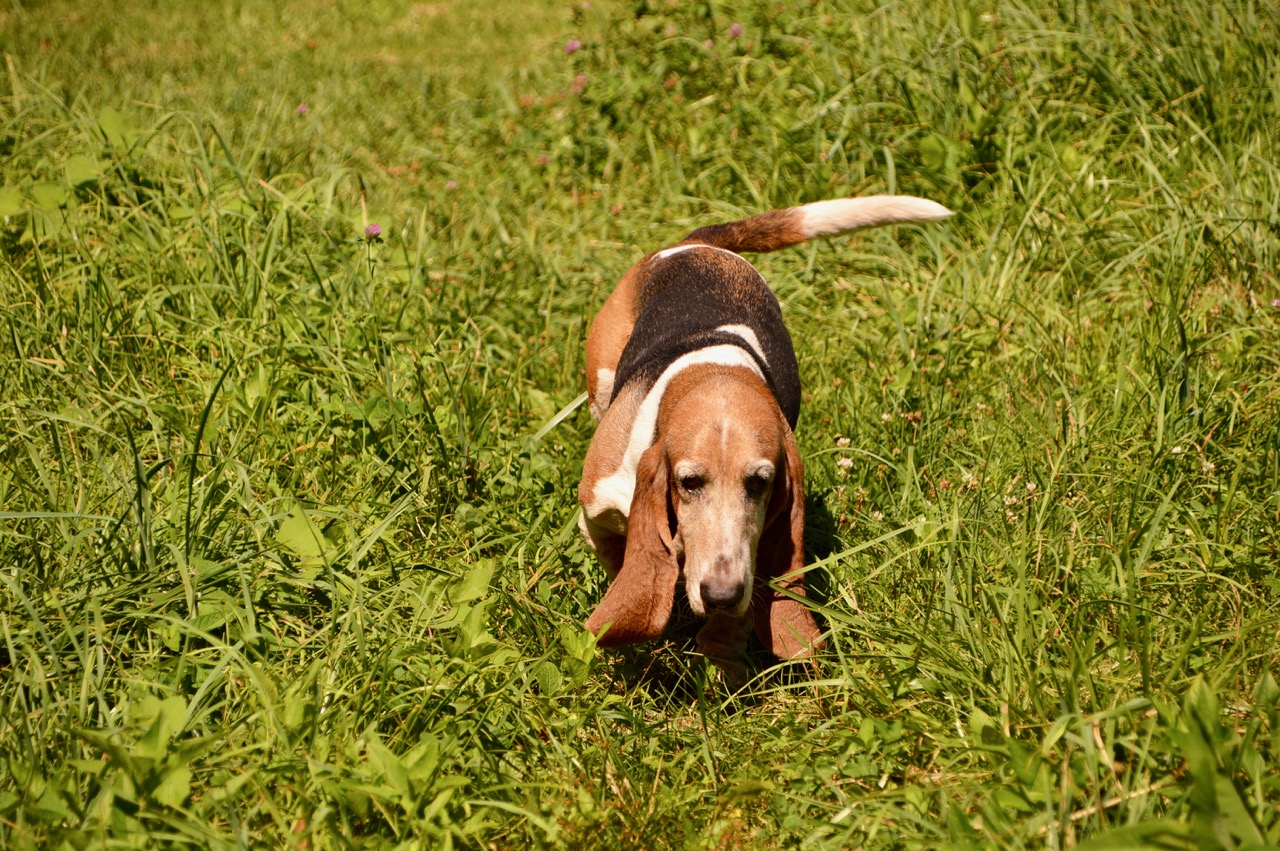 Hardly into the walk Stella had already started trotting to catch Sadie. When I see that I always hope she is on her way back to running full speed since she loves to run but hasn't been able to for some unknown reason. 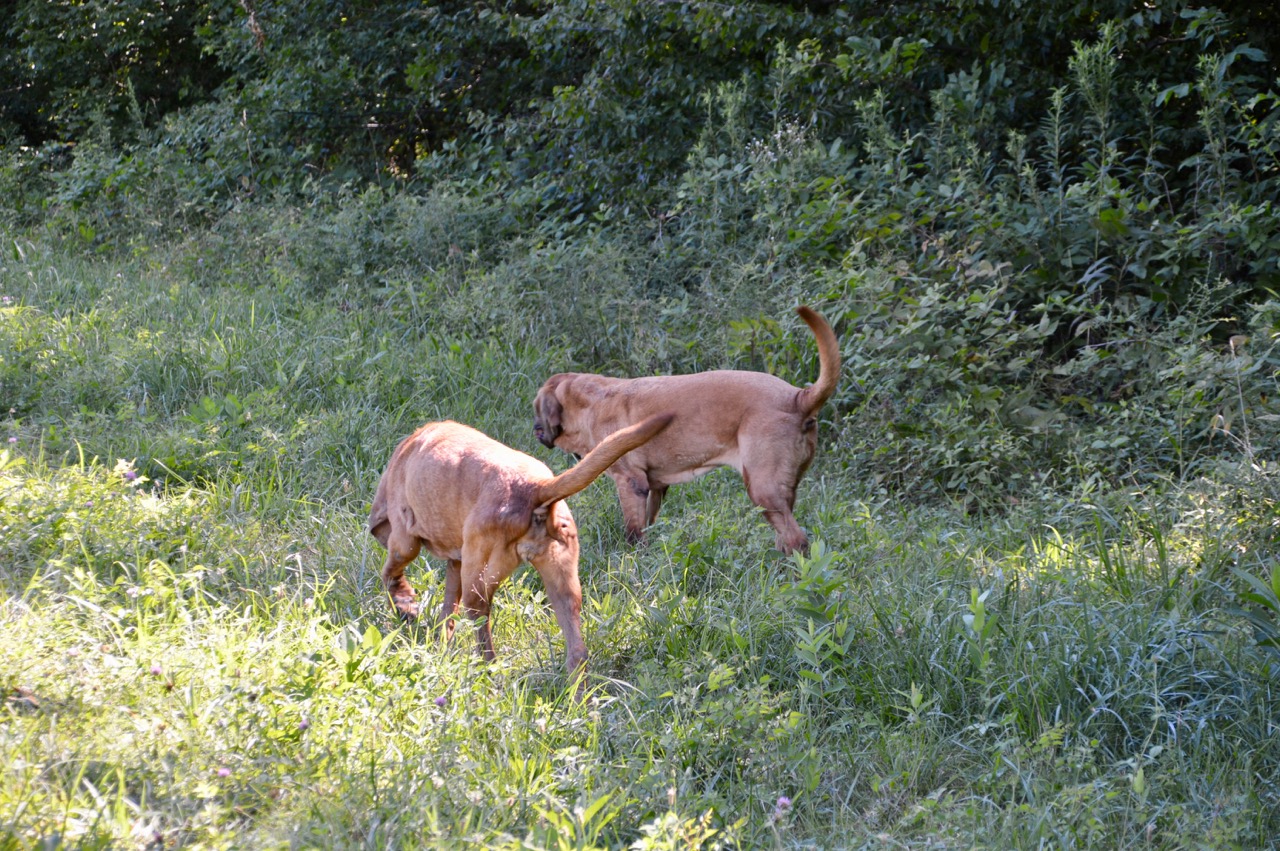 Heidi was actually trotting a little also but she was really more into smelling every scent in the field instead of walking. I knew she would be turning into the field soon on her own exploration. 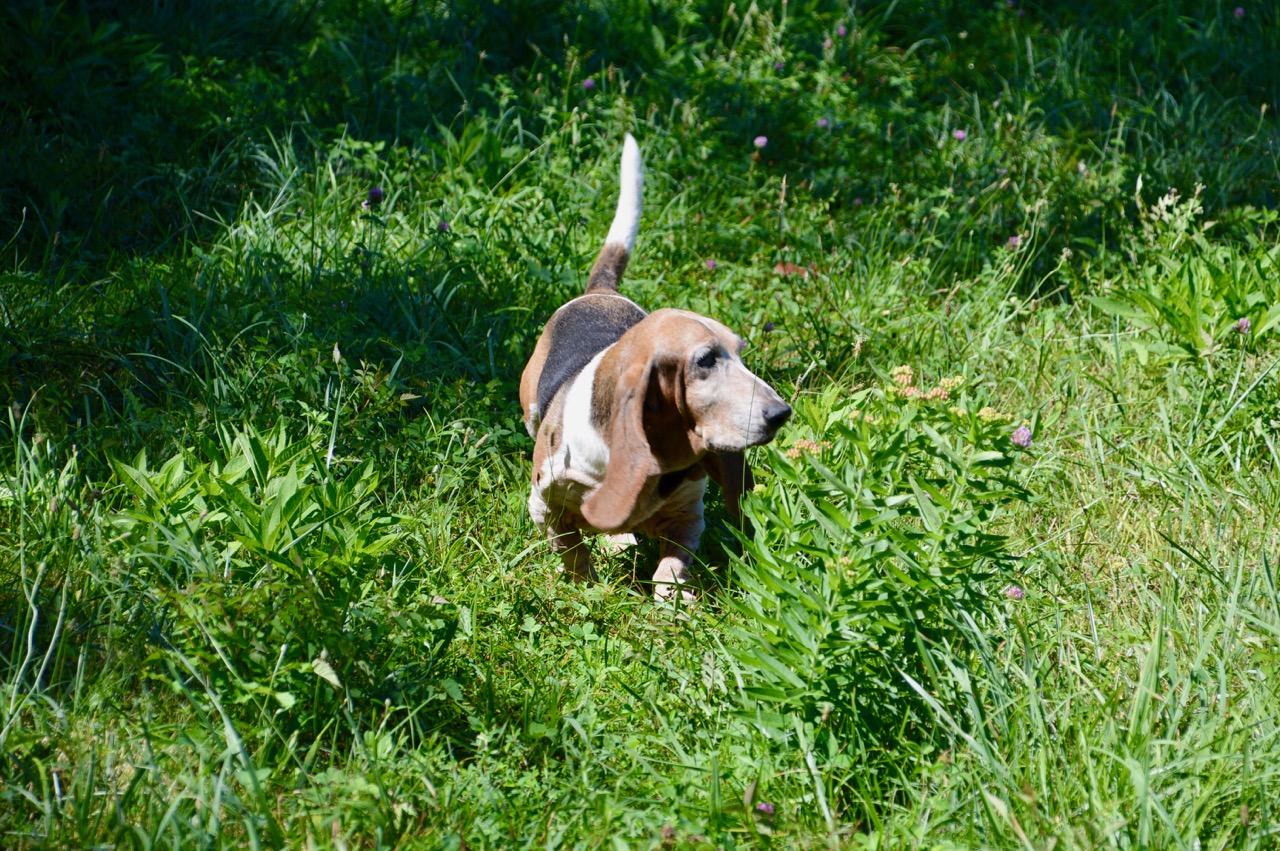 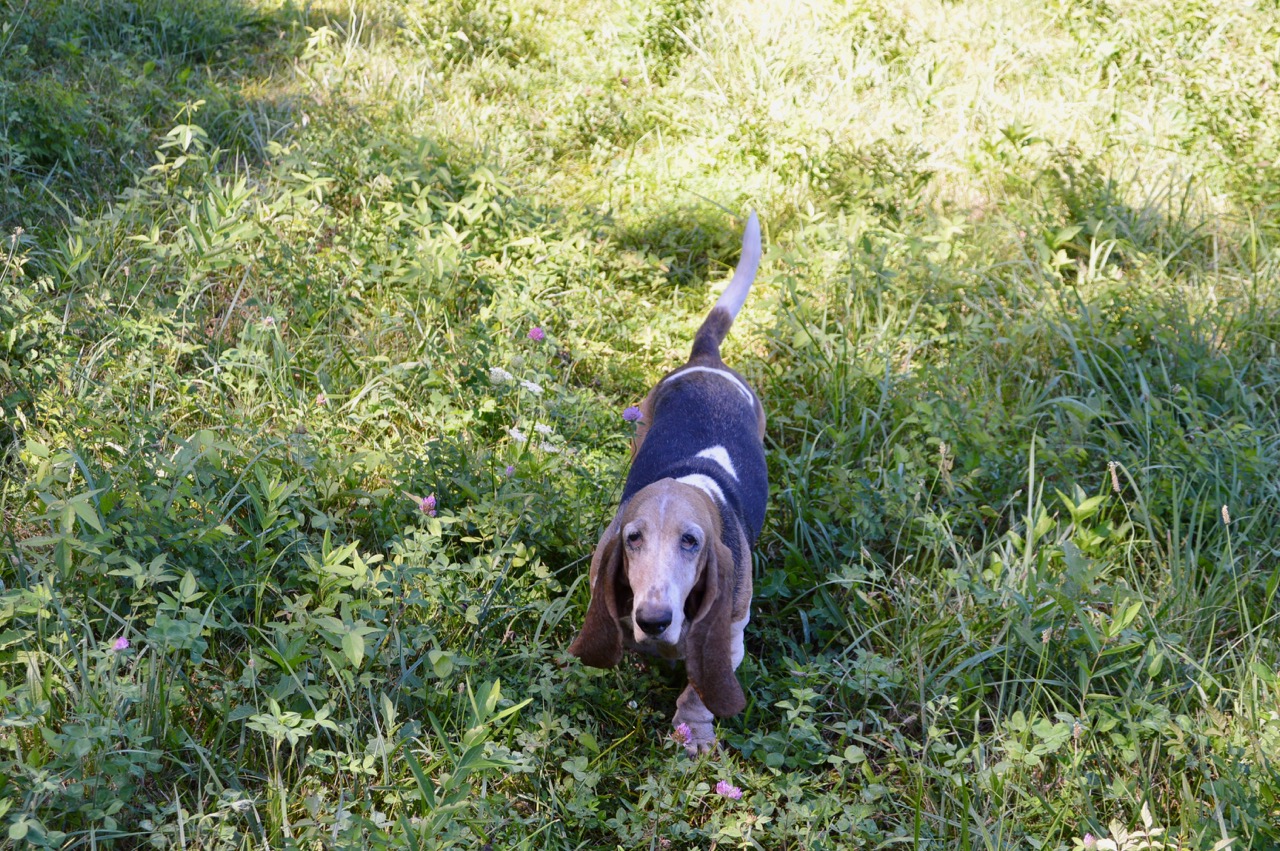 What a difference in her appearance compared to two summers ago. 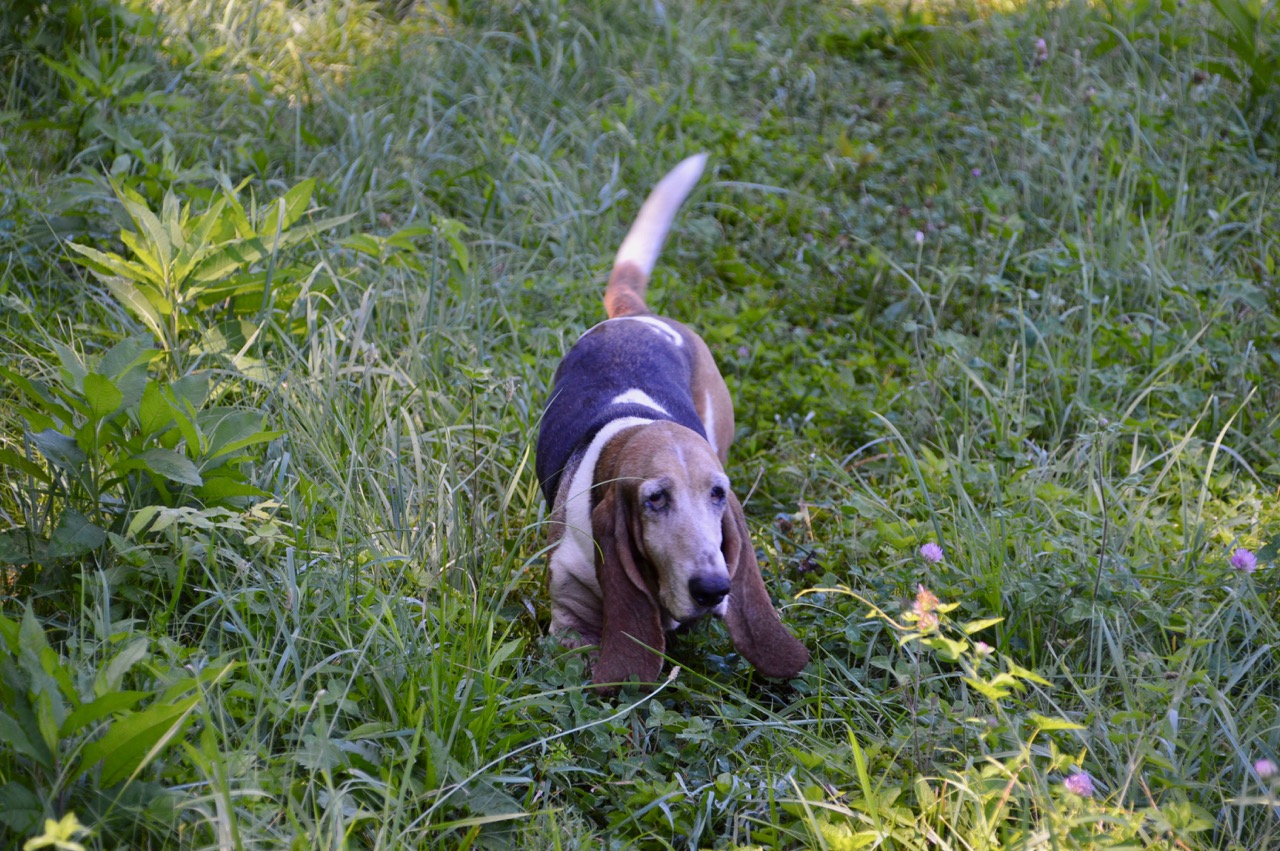 After I turned away from Heidi, I barely caught Stella actually running to catch Sadie. Galloping more than trotting. They both took off around the corner, so I thought a deer sighting might be possible ... but nothing was there. They were just both feeling good with the cooler temps. 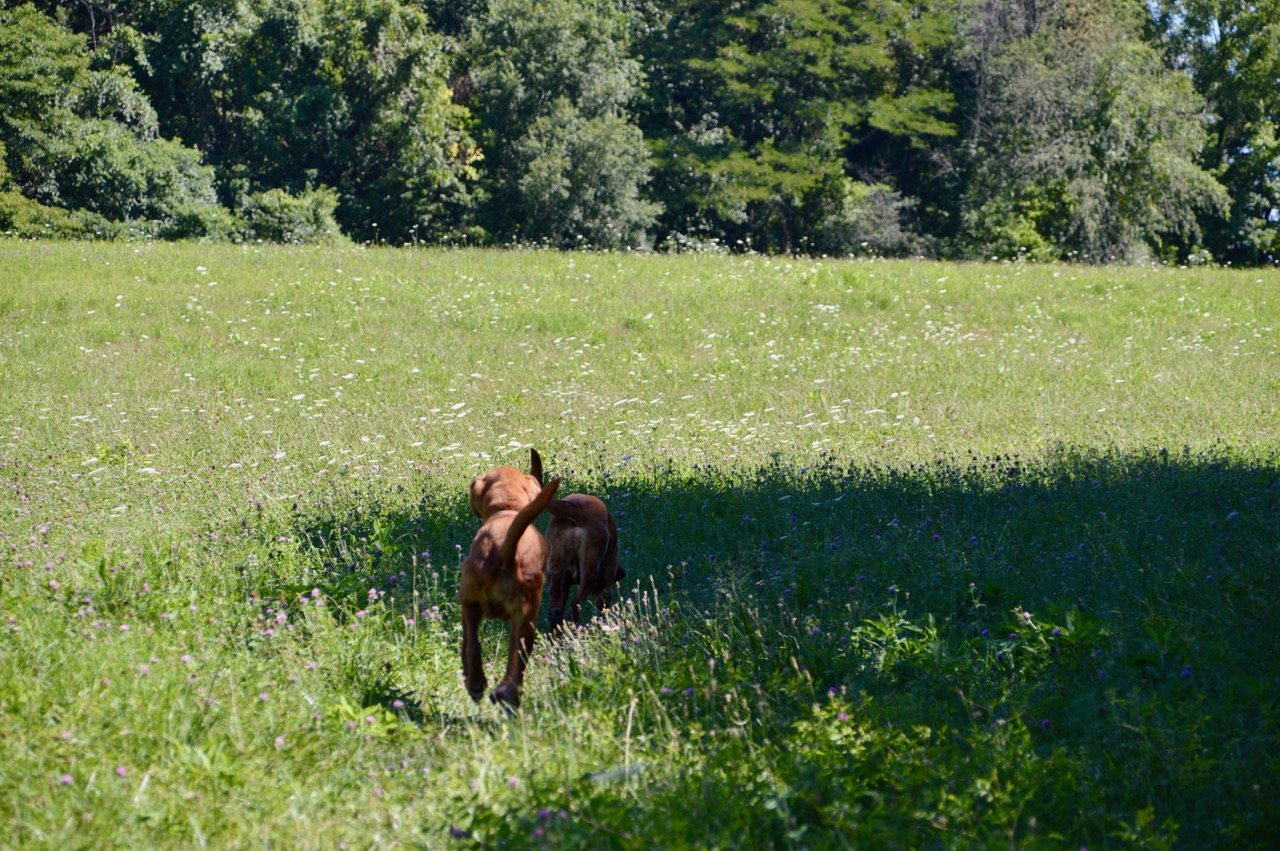 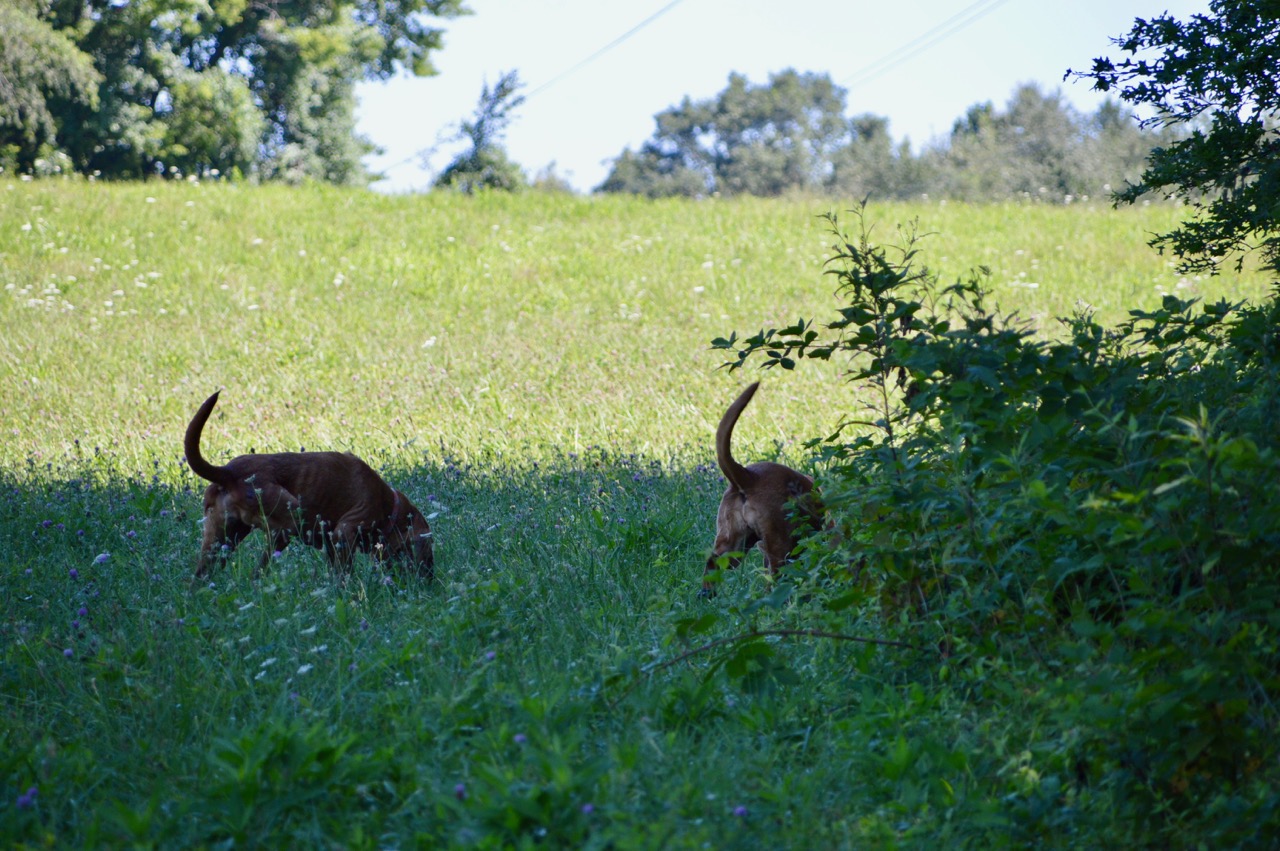 Just as I arrived at the first corner I turned to check on Heidi a final time to see if she was headed our way or somewhere different. She had already found a scent to keep her occupied. 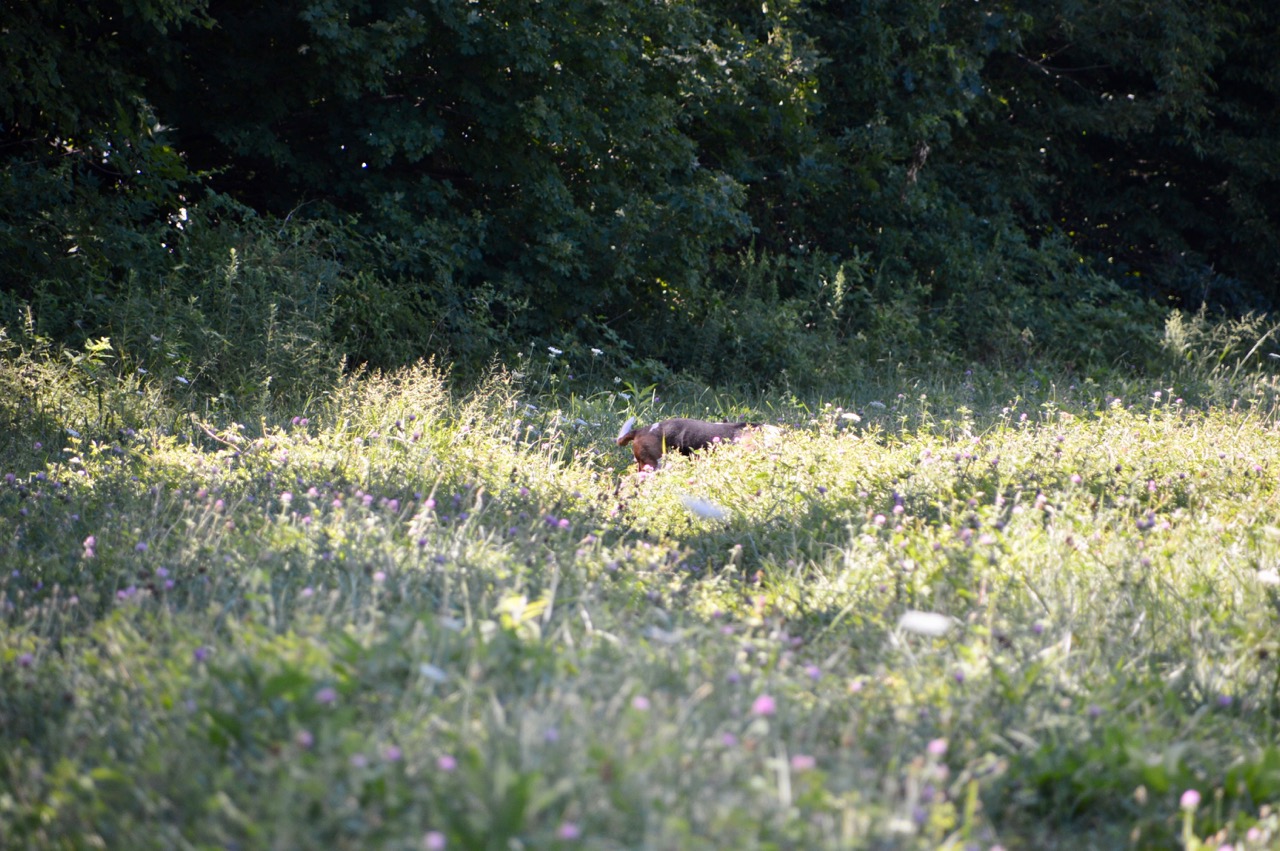 Again ... as I turn back to the bloodhounds, Stella is running again to catch Sadie. This is more running than I have seen her do in almost a year. I'd have to go back and look at pictures or blogs posts to get an accurate time. 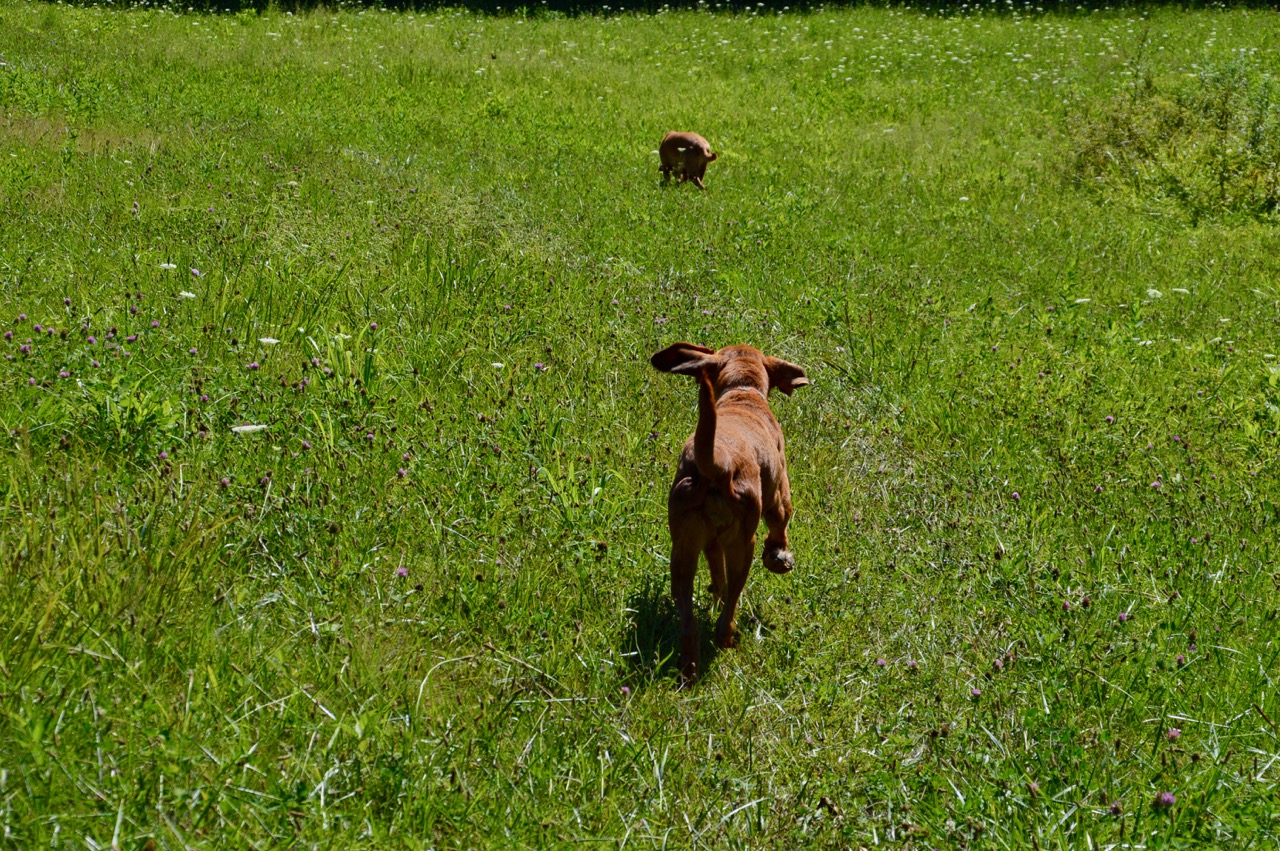 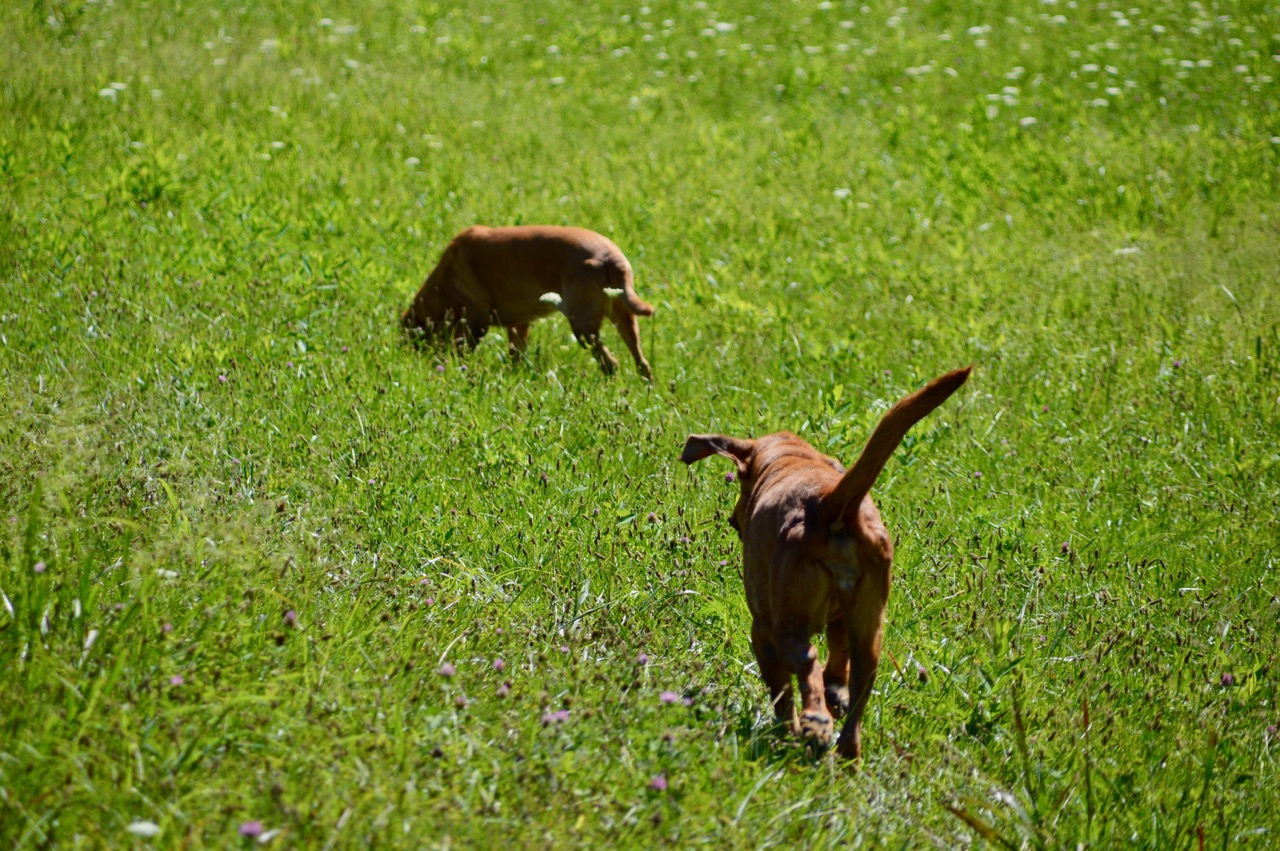 Not a lot of eating stuff today ... just a lot of snooping and sniffing around. 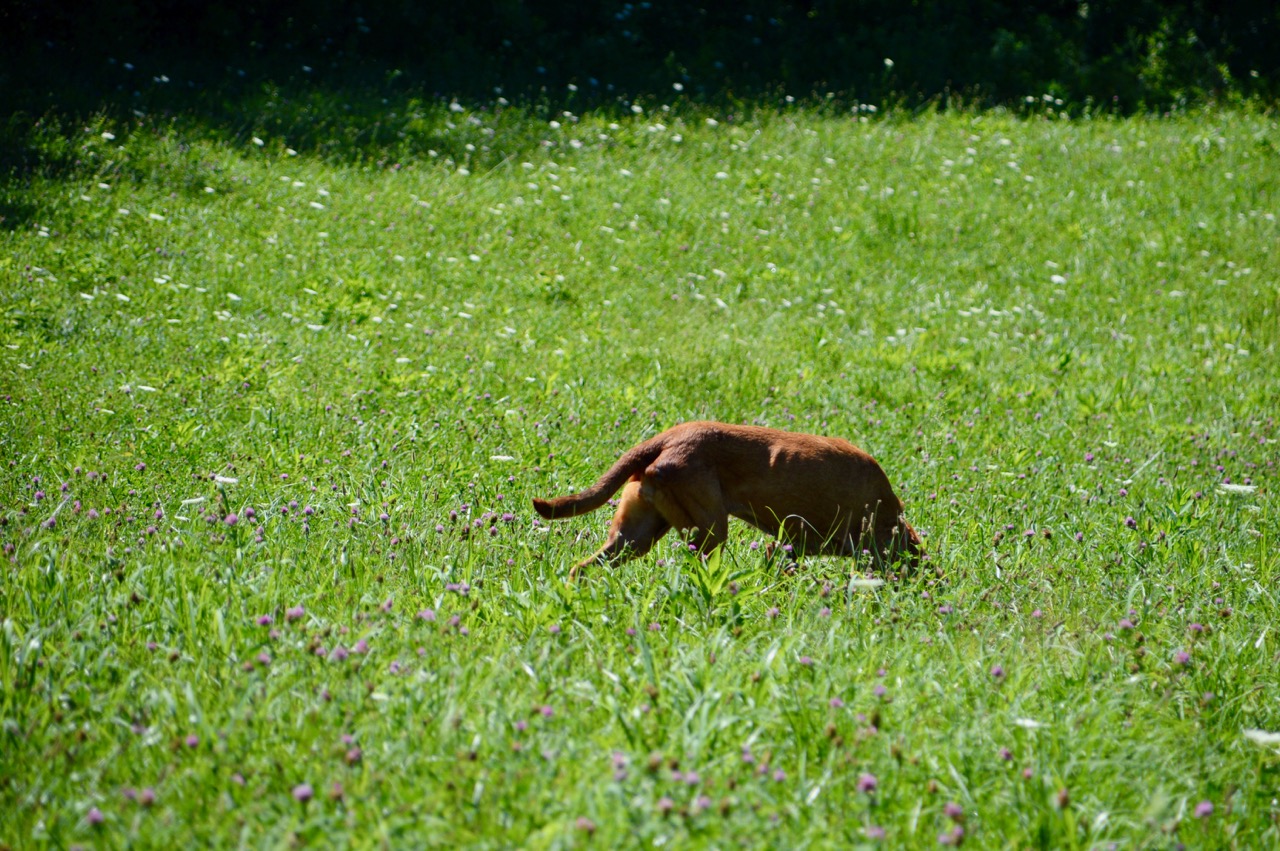 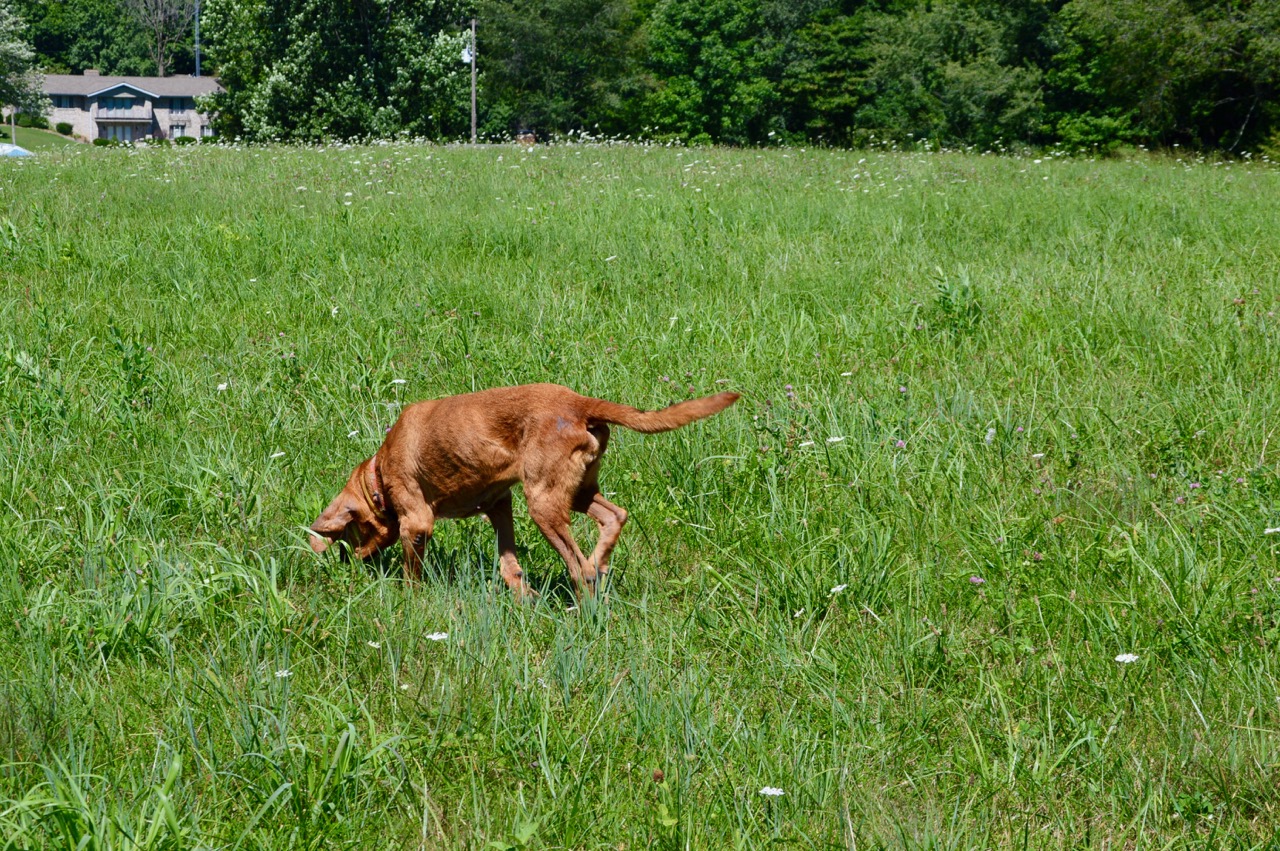 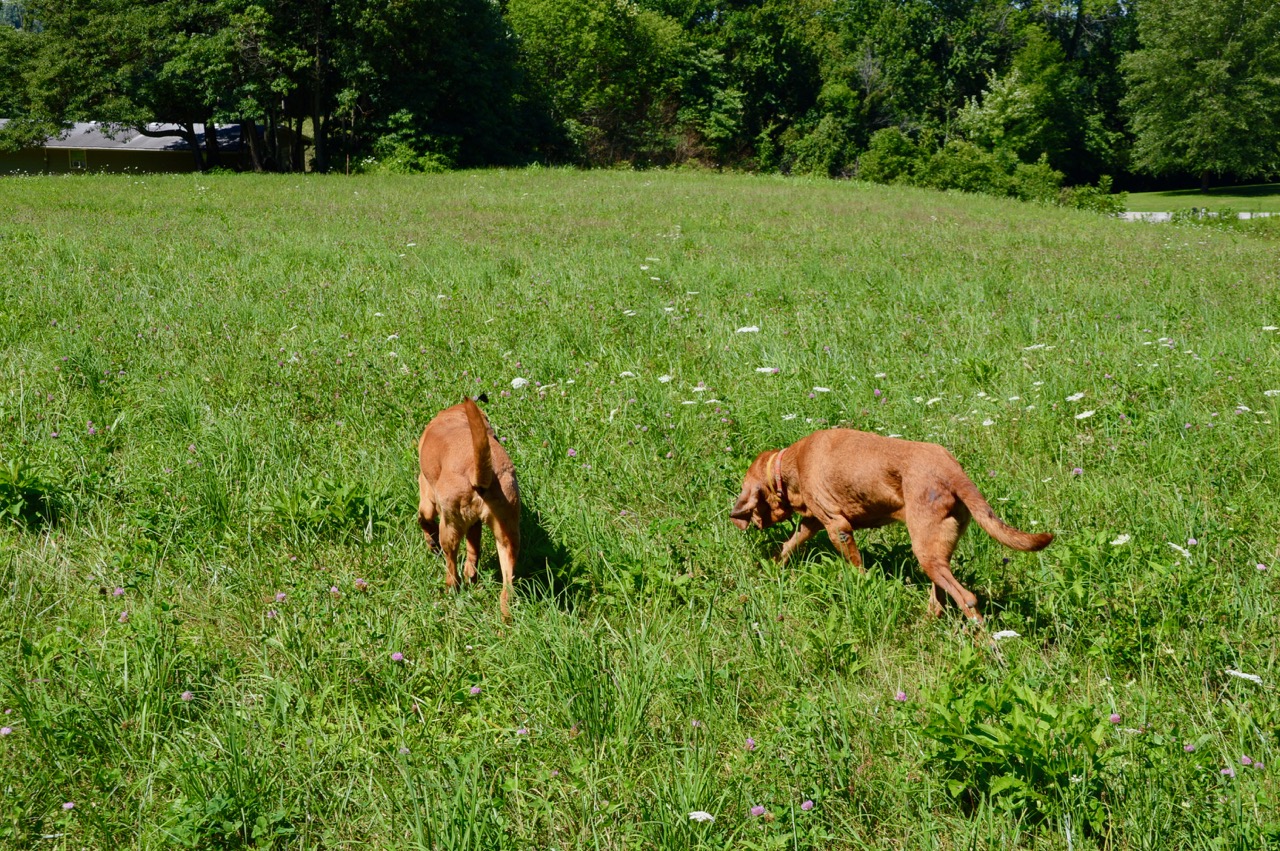 As I neared home I could see Heidi looking up at us. The camera rarely catches the movement of her wagging tail. She has been a happy basset hound lately. She is back to growling at herself as she plays inside or out in the yard. Once the bloodhounds try to join in her fun, she will stop playing. They are too big and stronger than she likes. 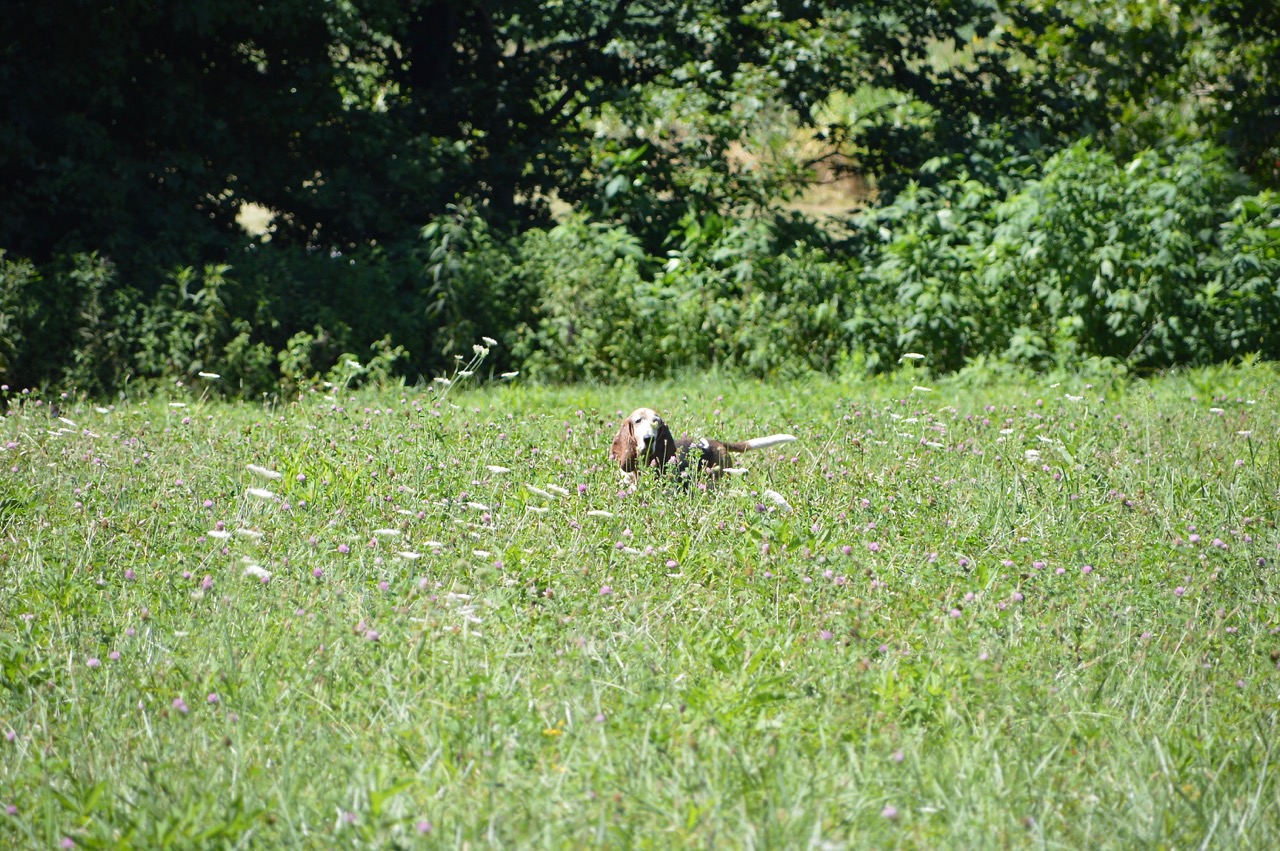 For once she was not sleeping in this next picture. She was rolling on her back from side to side to scratch it, then would just lay there enjoying the sounds and scents of the field ... then roll back and forth some more. 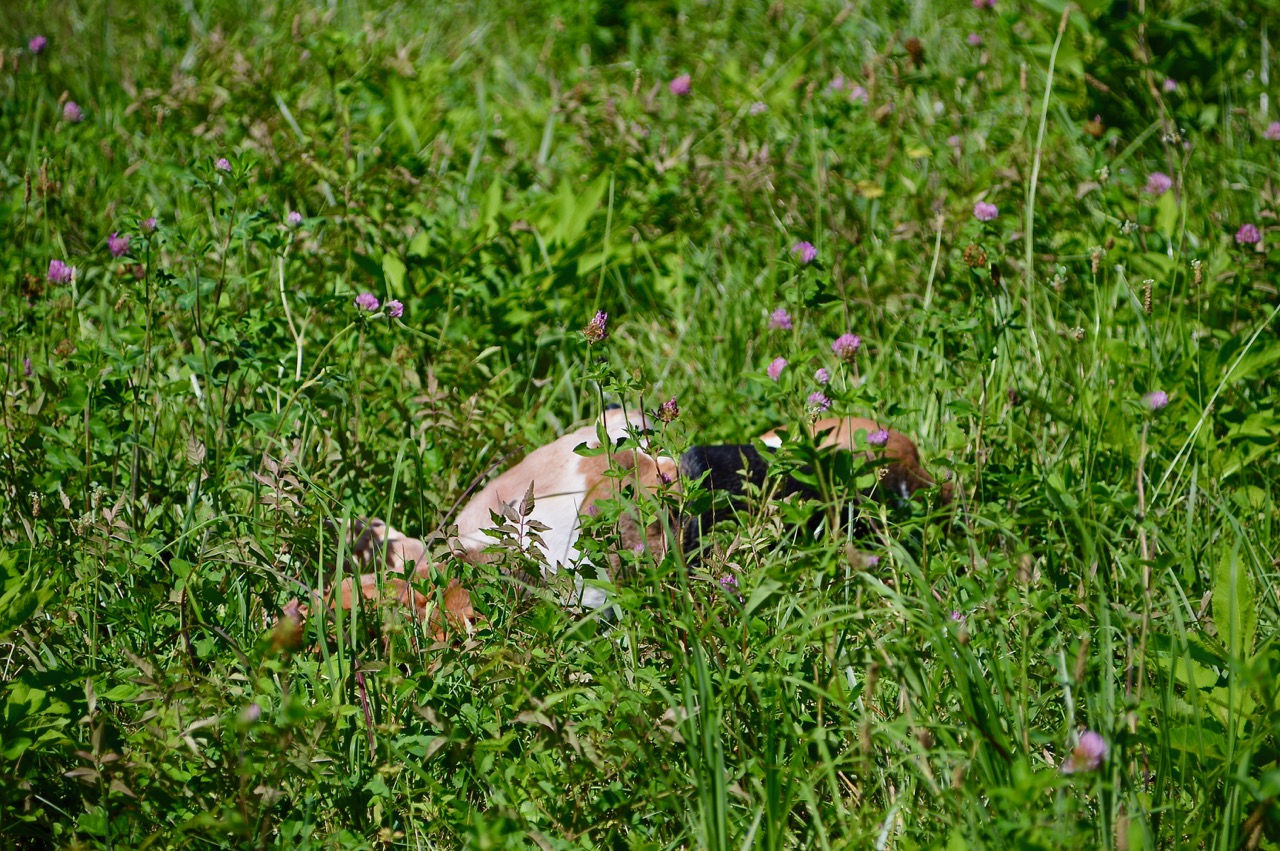 Once I told Sadie 'go find Heidi', it didn't take her long to run at her. Sadie will always perk up her nose and ears when I ask her to find either Heidi or Stella. 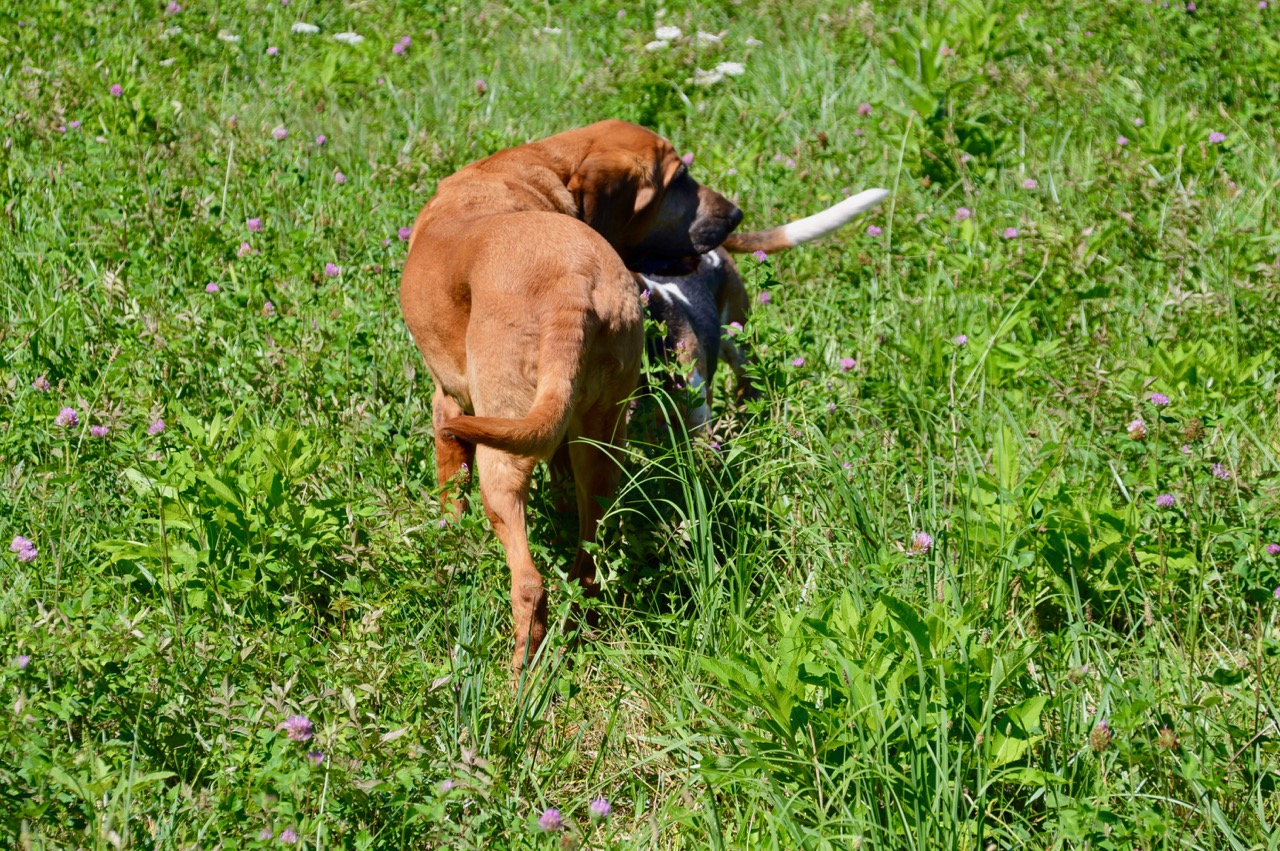 There were not a lot of butterflies this morning but this one was extremely tiny. I was surprised when I saw the picture that it had so much color. 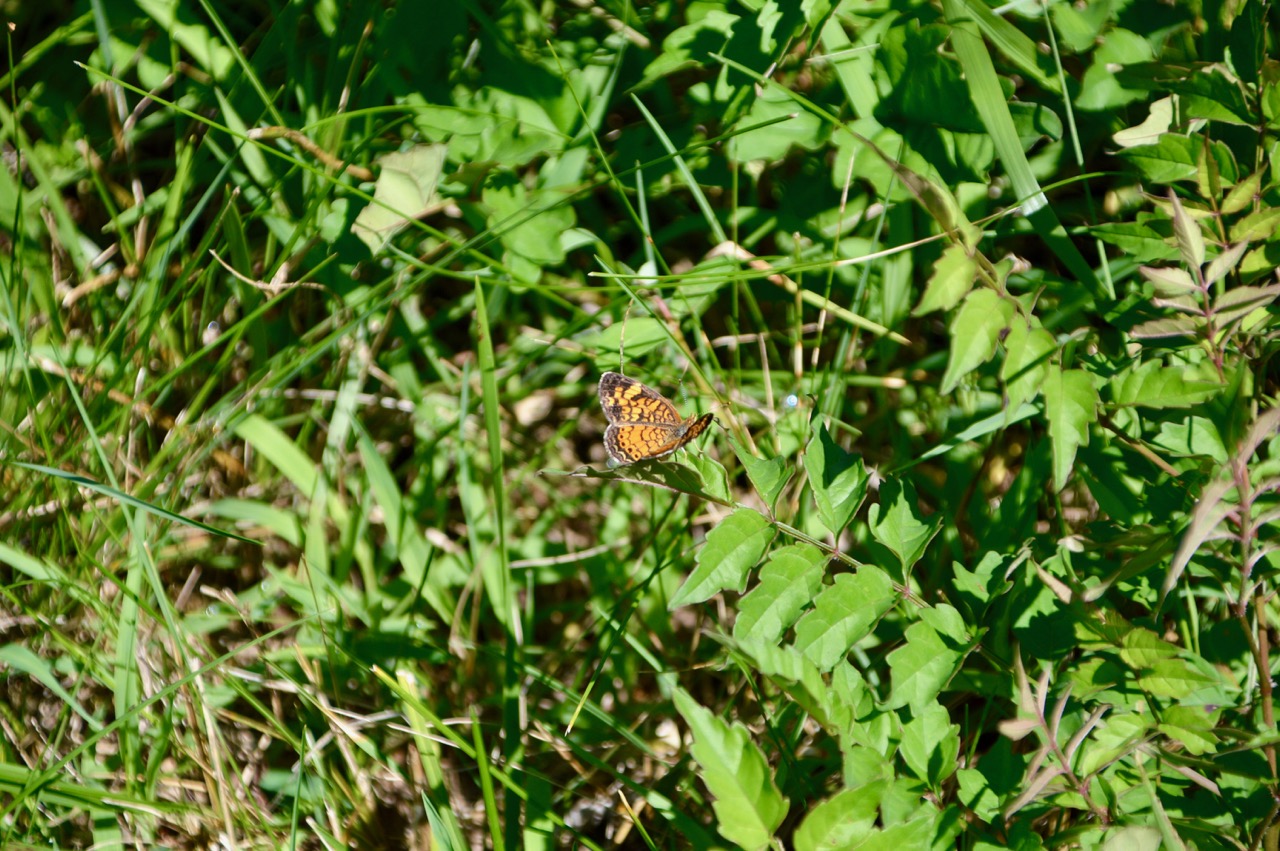 No, that is not Sadie taking a nap next door. It happens at least one deer a year but they usually end up in my driveway or the culvert and at times in the front yard. This time the deer ended up in the neighbors yard. He called the state highway department for them to pick it up yesterday but they didn't show up. This morning the neighbor was moving it off his property with his ATV. 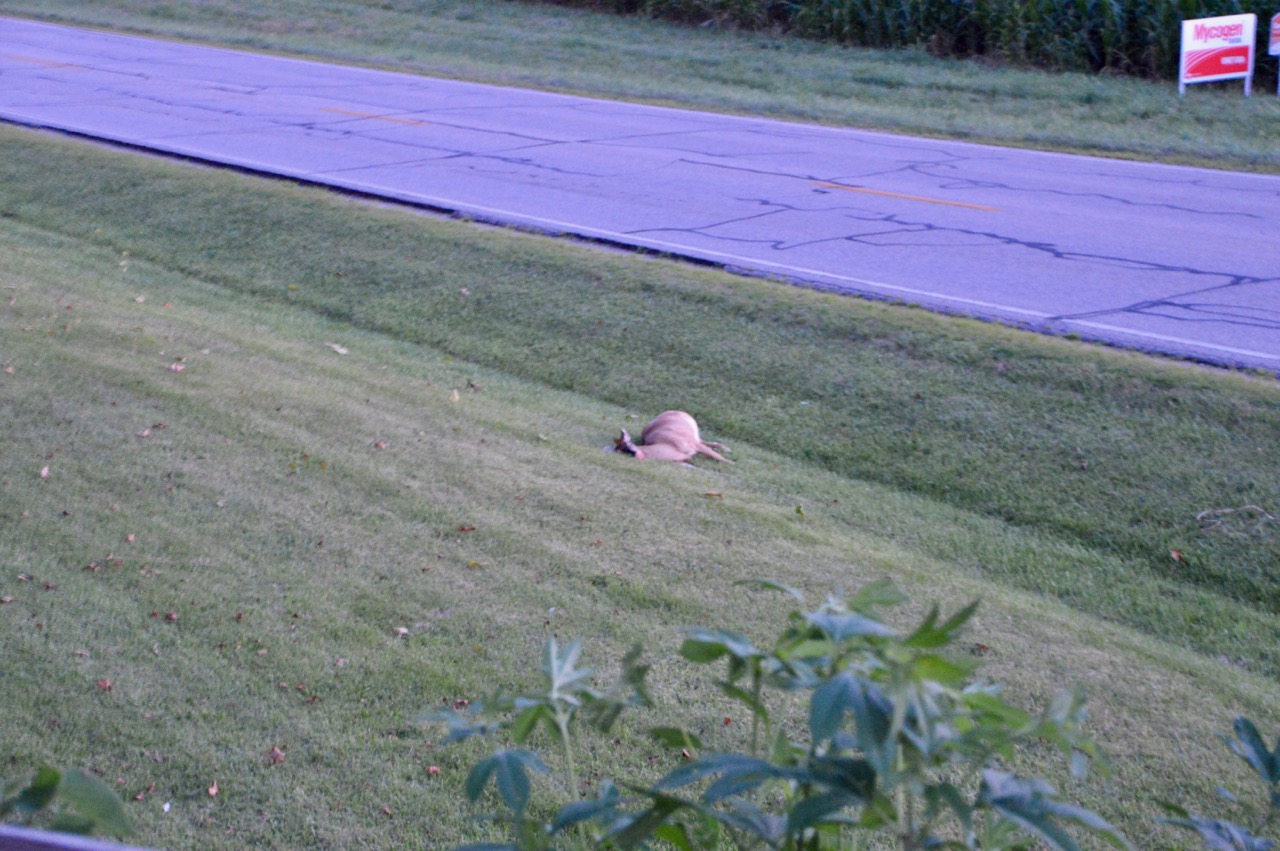 I was surprised to hear the deer had been there since yesterday afternoon. I saw it last night about sundown as I checked my mailbox. Luckily the hounds did not smell it and want to take off to check it out. Most of the time someone will pull up in their pickup truck with a friend and will take it away. They are usually not by the side of the road long. 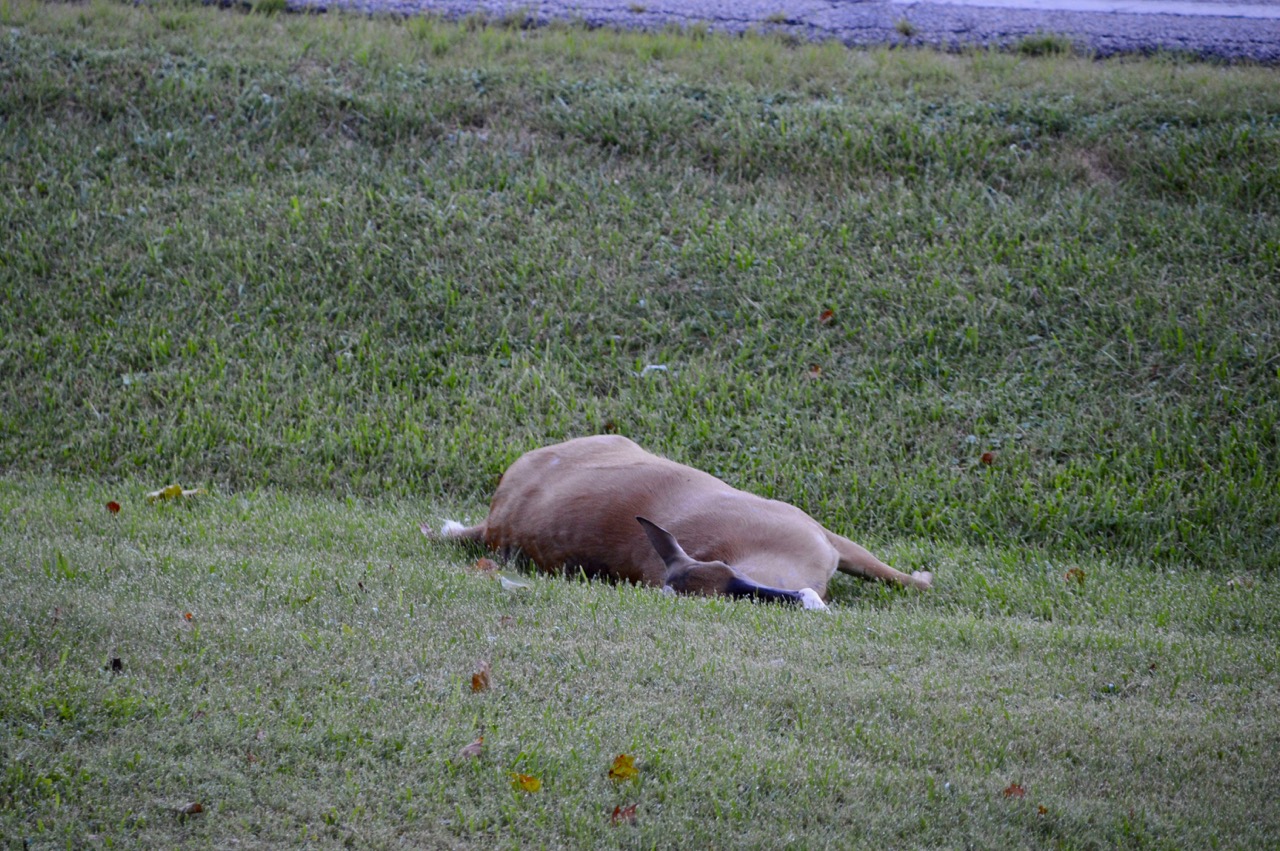 Sadie is in the opposite direction of the deer. She is behind the house not noticing anything about a deer next door. 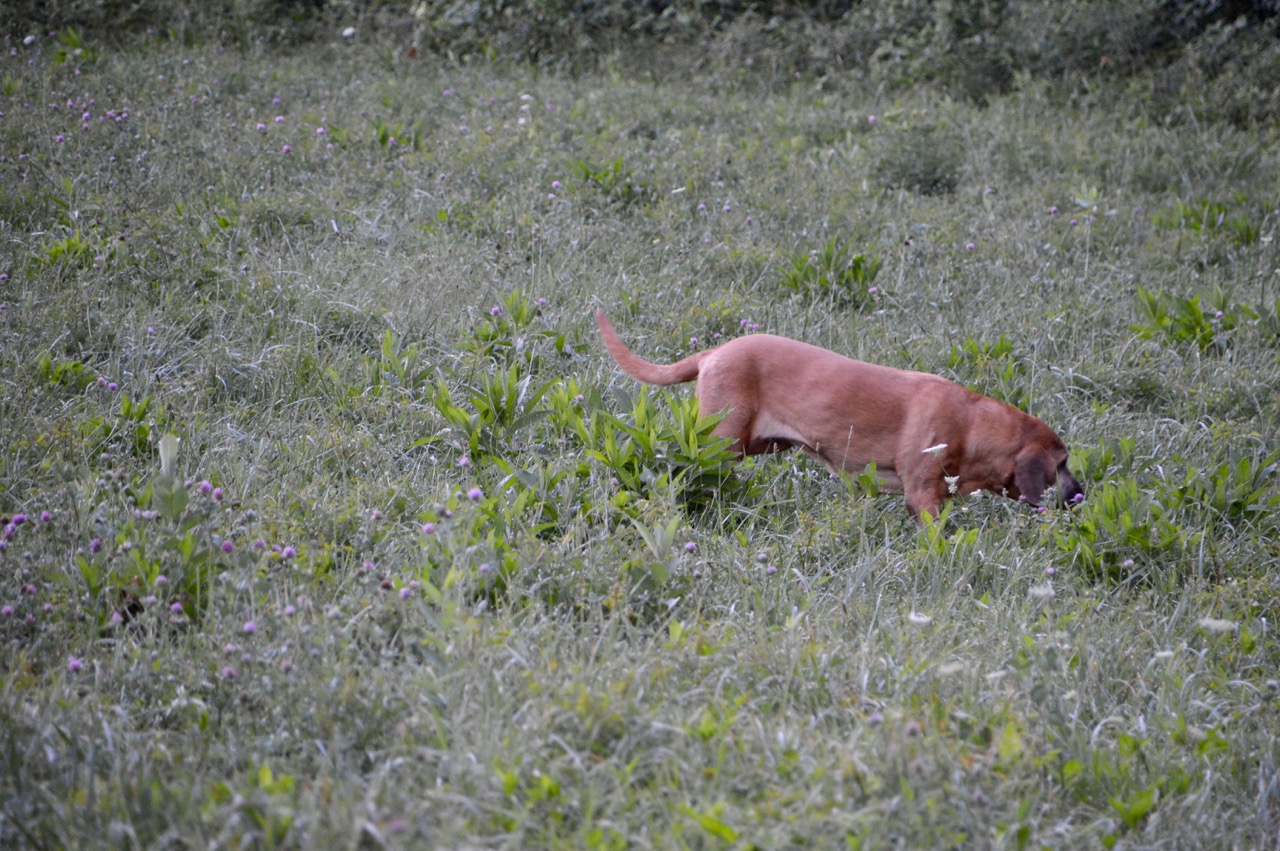 It's such a nice day today that I decided to go ahead and post this now instead of waiting. I don't think I will be around the computer until late tonight since the weather is so nice. I think it's time to head out for a local drive with the camera and see what I can find.

I cannot describe how nice of a day it is here in 'the tropics' of Southern Indiana today.
at July 29, 2017