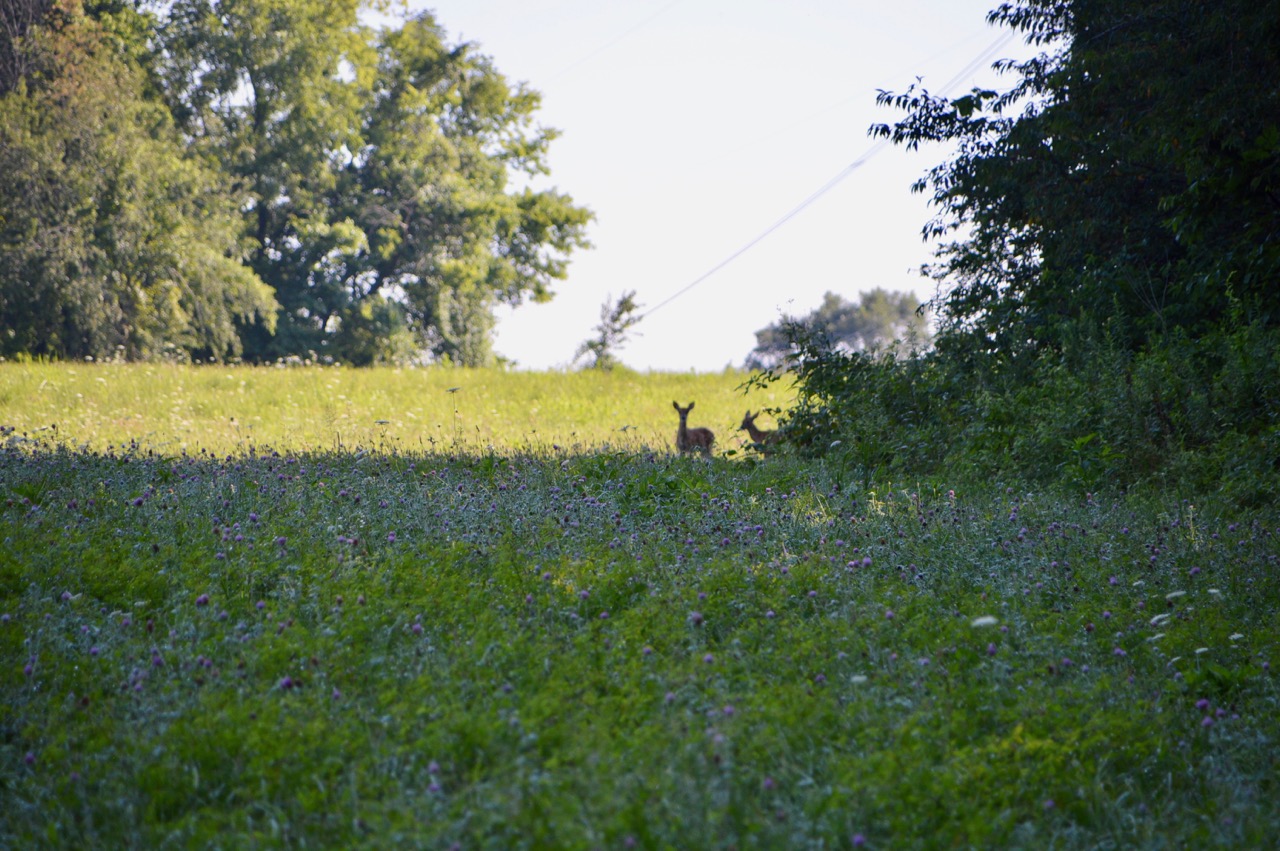 I am beginning to think that Sadie and Stella need to go in for some maintenance on their noses. For the 2nd time this summer I've seen deer close to me and close to them with no response. For the 2nd time in 14 hours, two deer have been within 30' last night and at the first corner this morning ... no response by the hounds.


It looks like we may have a couple of curious new neighbors. Last night around 6:30pm Sadie, Stella and I were heading out for our 3rd walk of the day but NO CAMERA ... big error. Just as we turned the corner of the house and stepped toward the yard there they stood, two deer not 30' from the edge of the yard ... just as shocked as we were. None of us moved, the deer the hounds and I just stood still so the others could not see us. Even when the deer turned and sprinted for the woods, neither Bloodhound chased after them.  (strange) 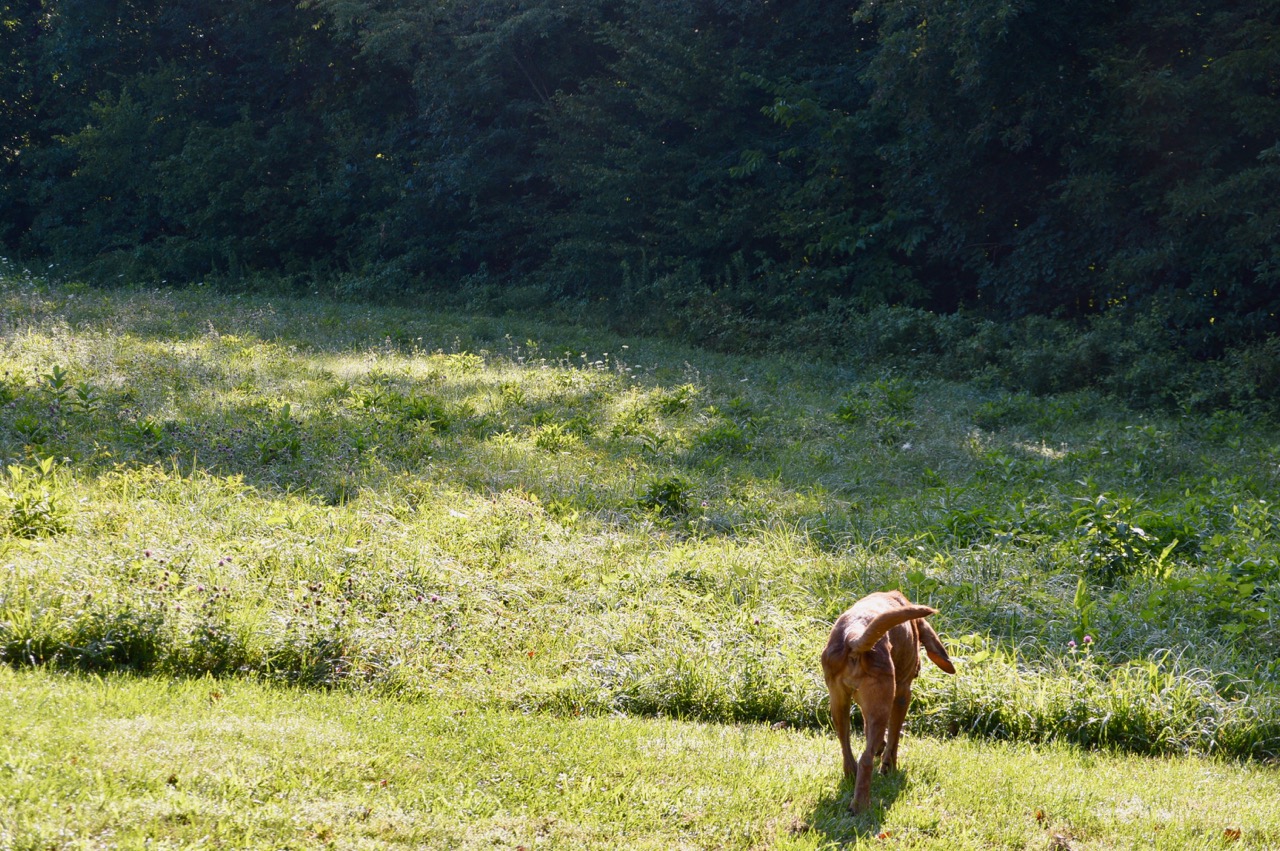 This morning started like any other walk early in the morning. We were a little later today, just past 9am. At this time I did not see who was staring at us again. Sadie slowly strolled to the wet field and Stella stopped to eat some nice tall, wet, green grass. Little did I know what I would see up ahead. 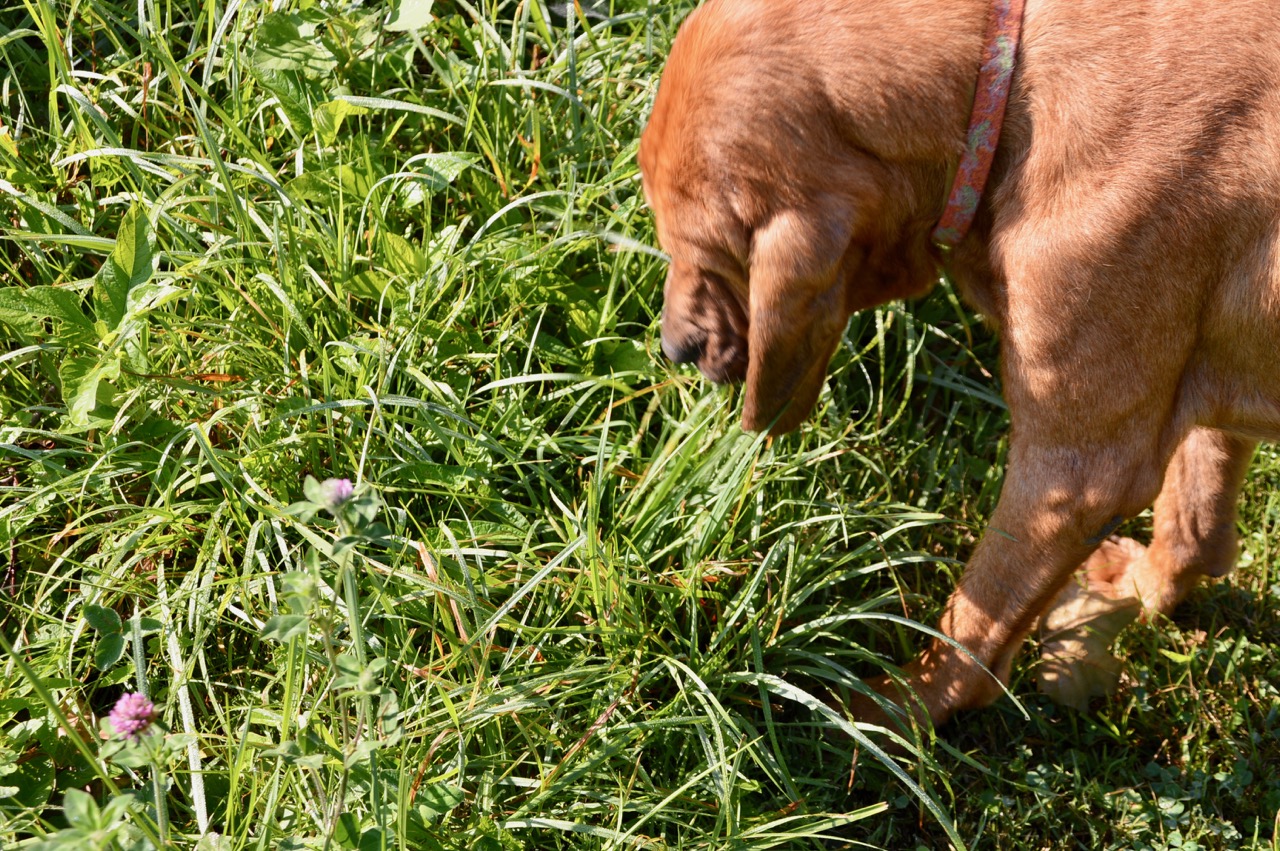 I thought I saw deer at the first corner of the walk but without my glasses on I can't see distance that clear. So I focused the 200mm zoom lens and sure enough, there they stood. A mom and baby looking at us again. I don't believe it was the same two from yesterday. I turned to look to see if Stella was going to take off after them ... she had her nose to the ground totally unaware there were deer in the area. 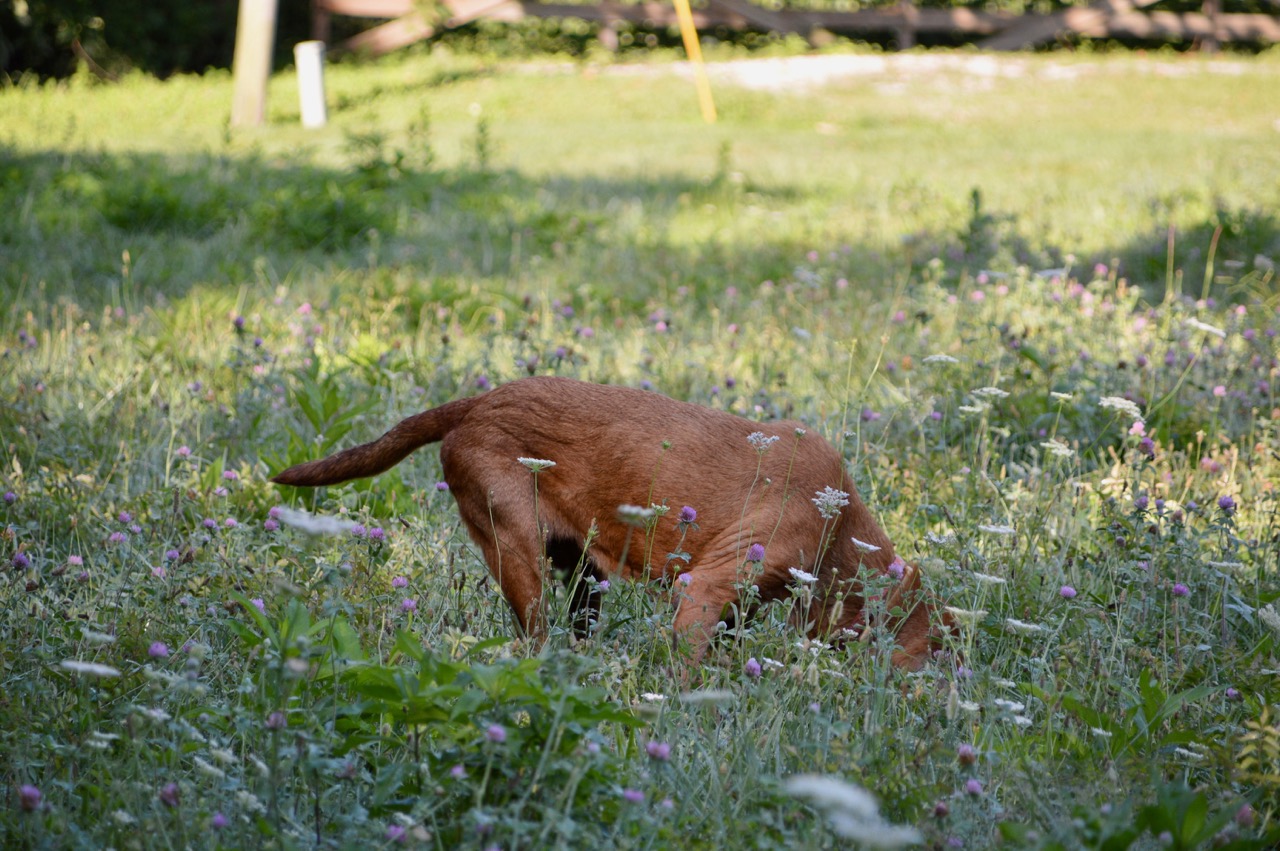 Same response from Sadie. She had no clue that two deer were within eyesight and close enough to chase. I saw the deer turn and walk around the corner and knew they would not be there by the time we arrive. 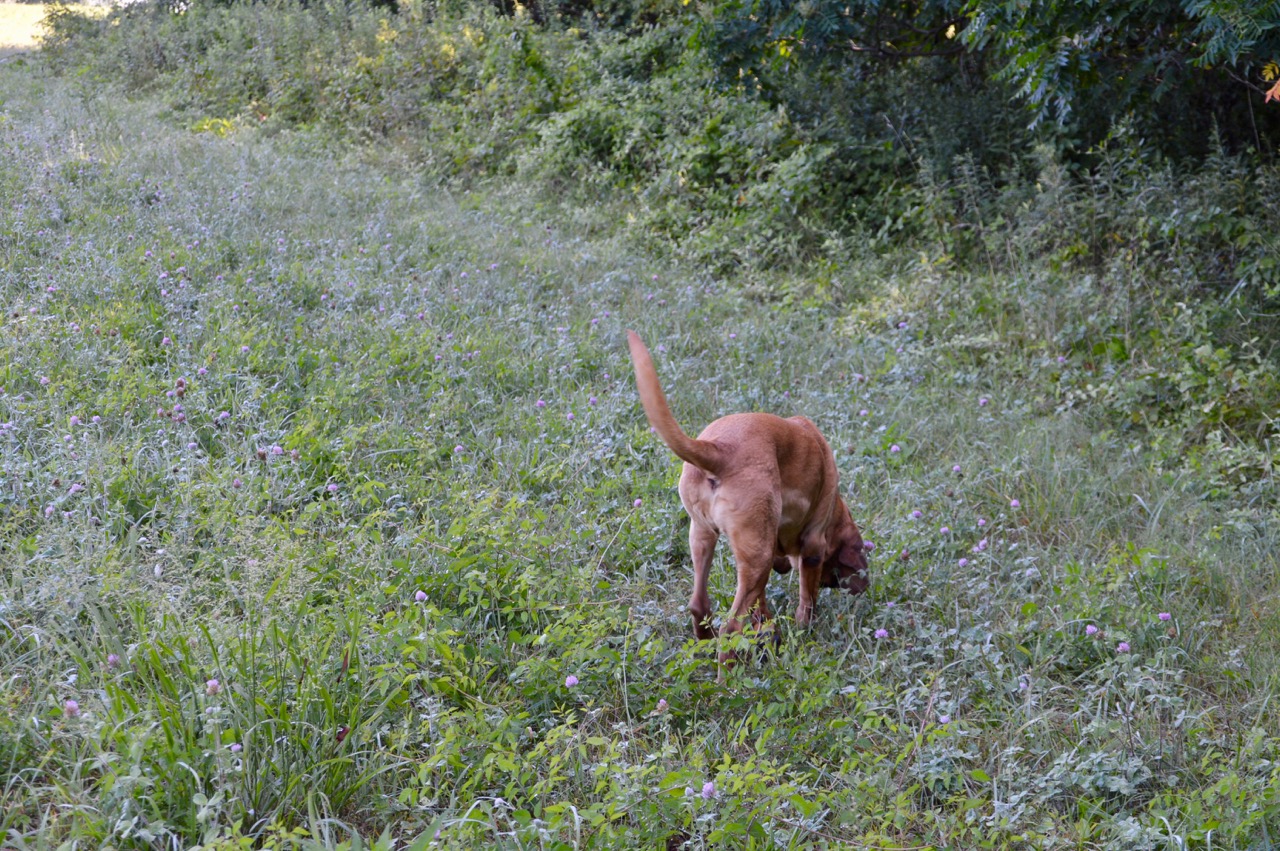 The closer we got to the corner Sadie decided that yes, something had been in this area but didn't show that bent out of shape excitement that she usually has when her nose locks into a strong scent. 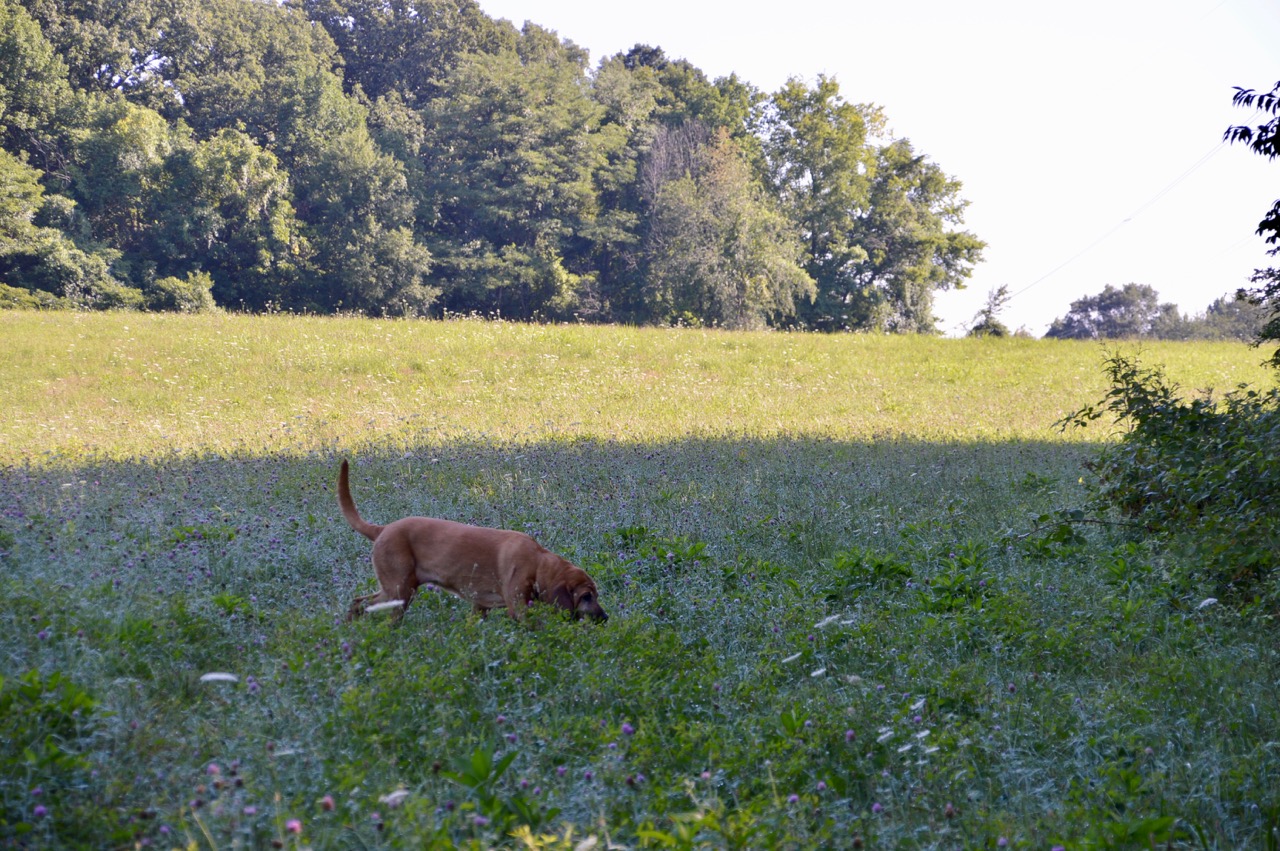 Stella was on her own pace, taking her time exploring the field. She finally came trotting toward me to catch up. Still, she did not show any 'deer urgency'. 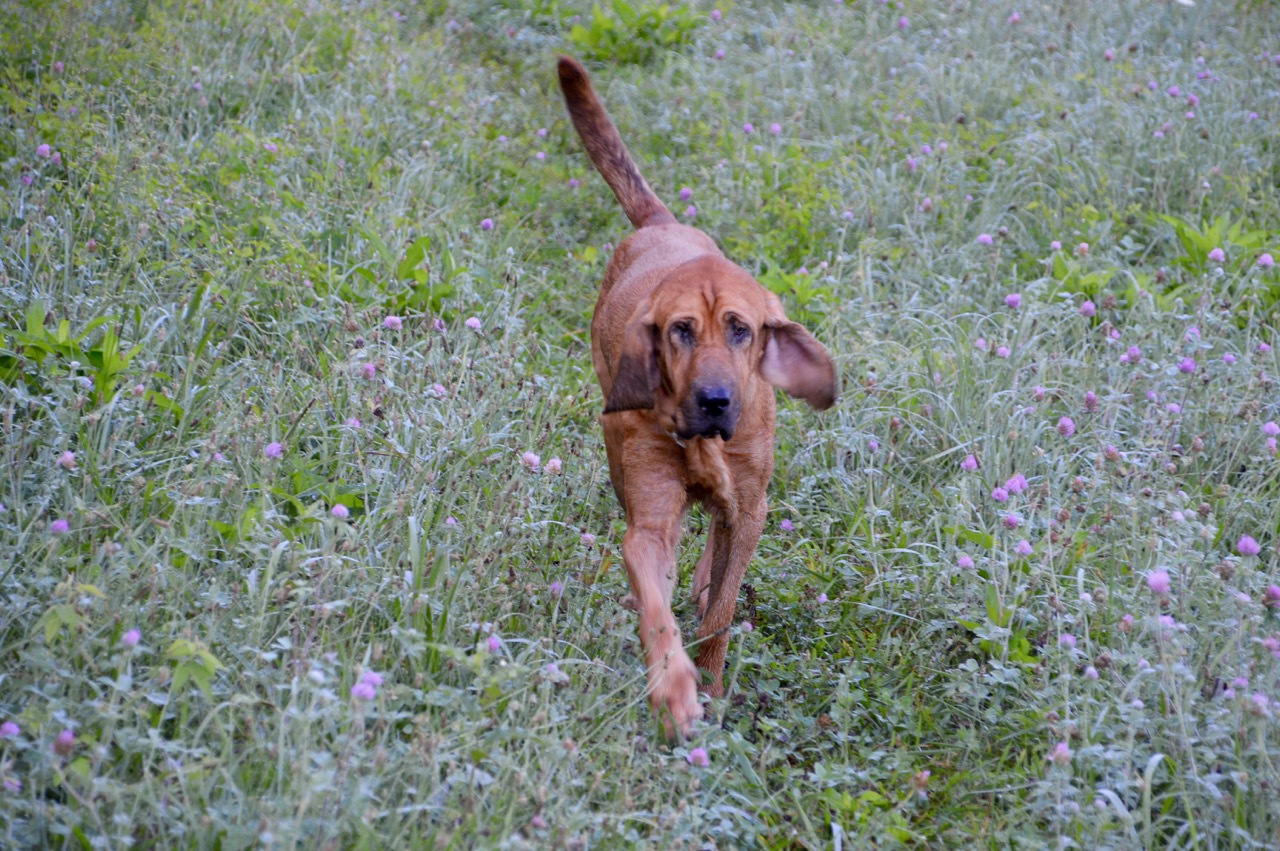 By the time I turned the corner the 'light bulb' had turned on in Sadie's nose and she was positive there were deer in the area area and took off sprinting for the far right corner ... the deer entry ramp down into the gully. 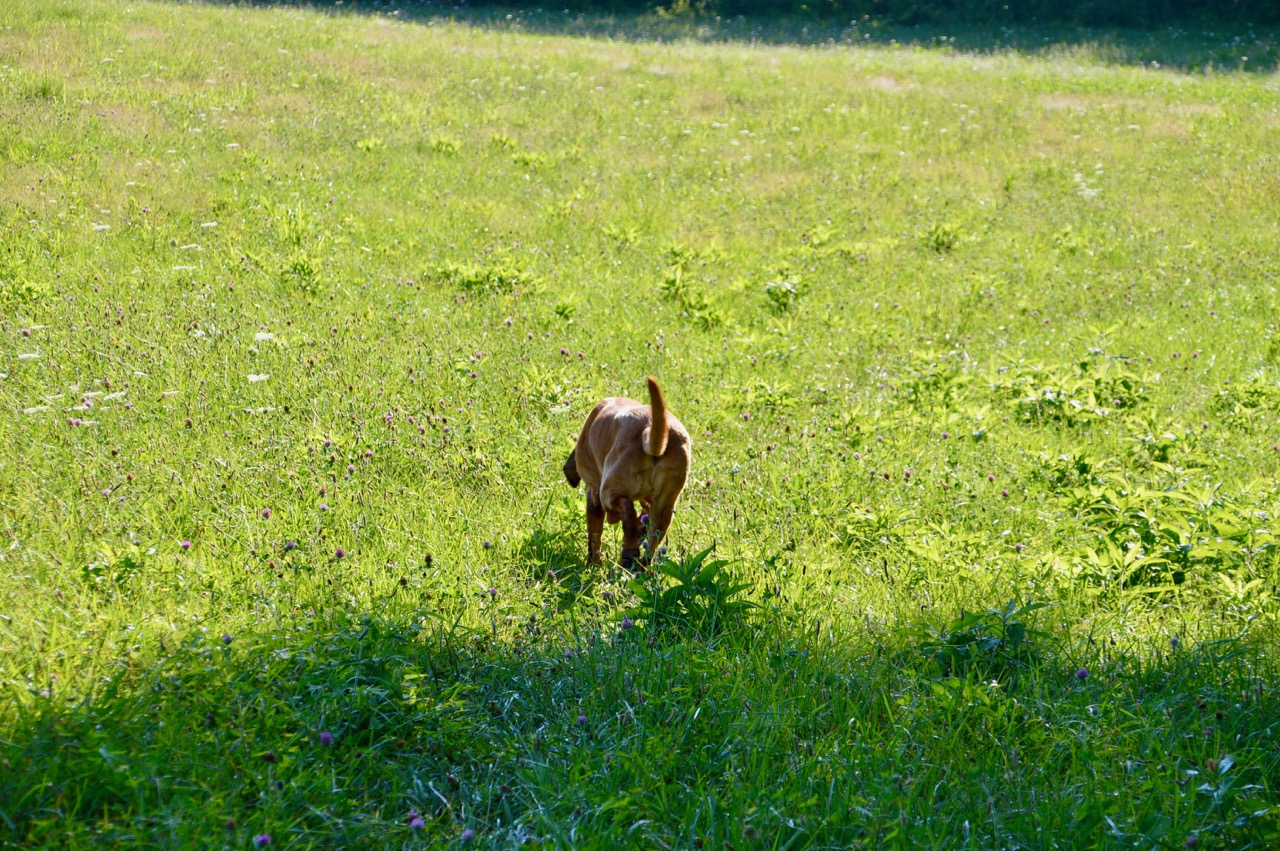 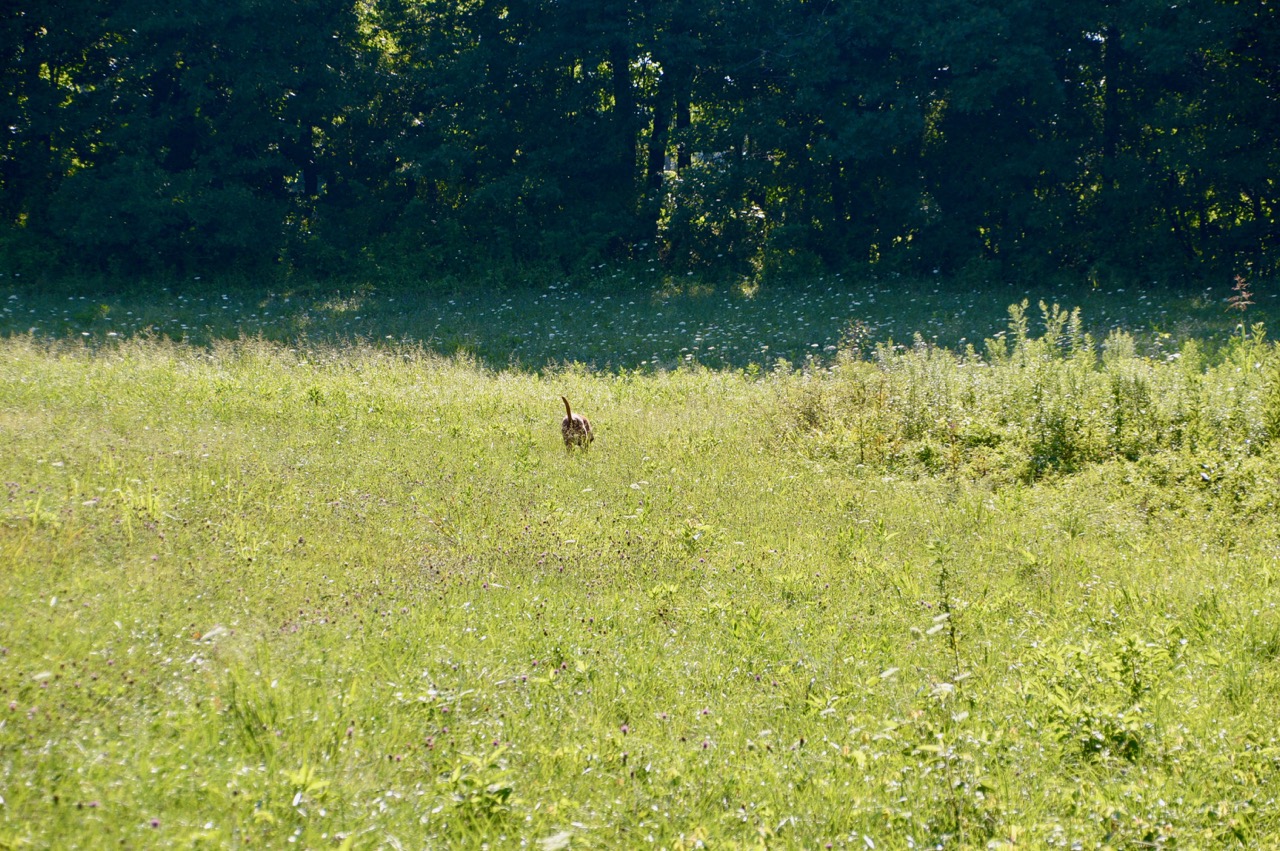 She was a day late and a dollar short in her search. The two deer were long gone, back at their camp telling their comrades about the two idiot bloodhounds they saw and were never chased. I'll be looking for them again between 6pm - 8pm, from inside and looking out the window, not to scare them off. 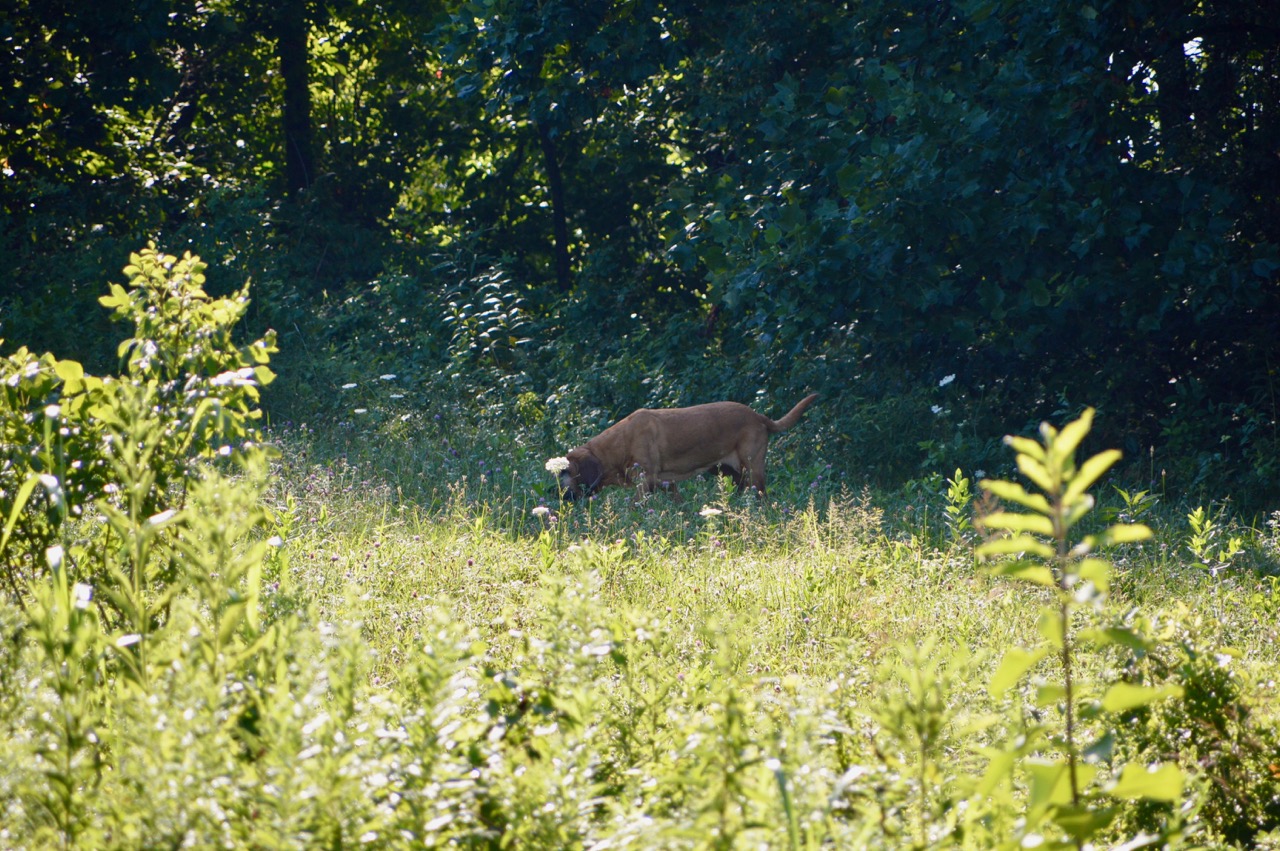 With both hounds enjoying the field in totally opposite directions I was able to catch some butterflies this morning. I am going take the camera with me on the afternoon walk today because again last night the field was full of butterflies. 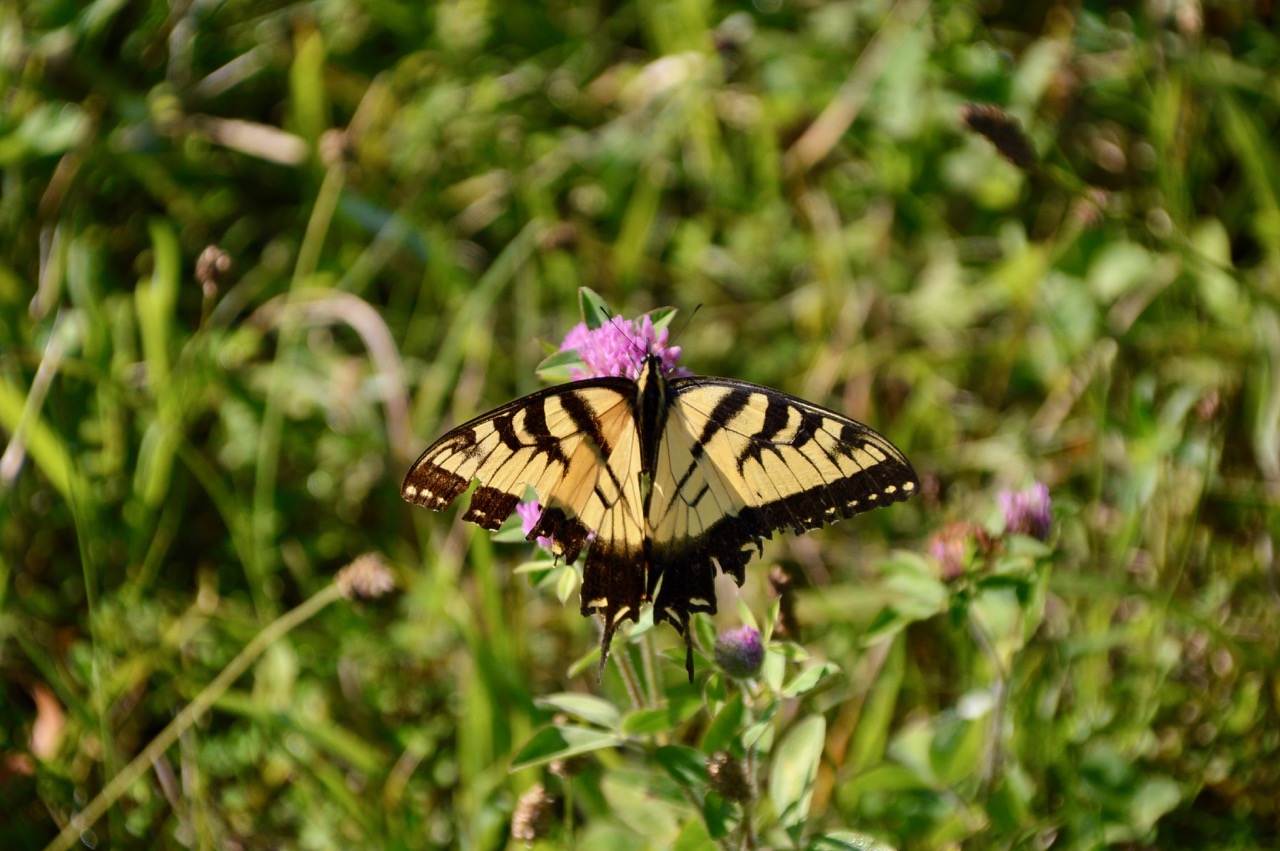 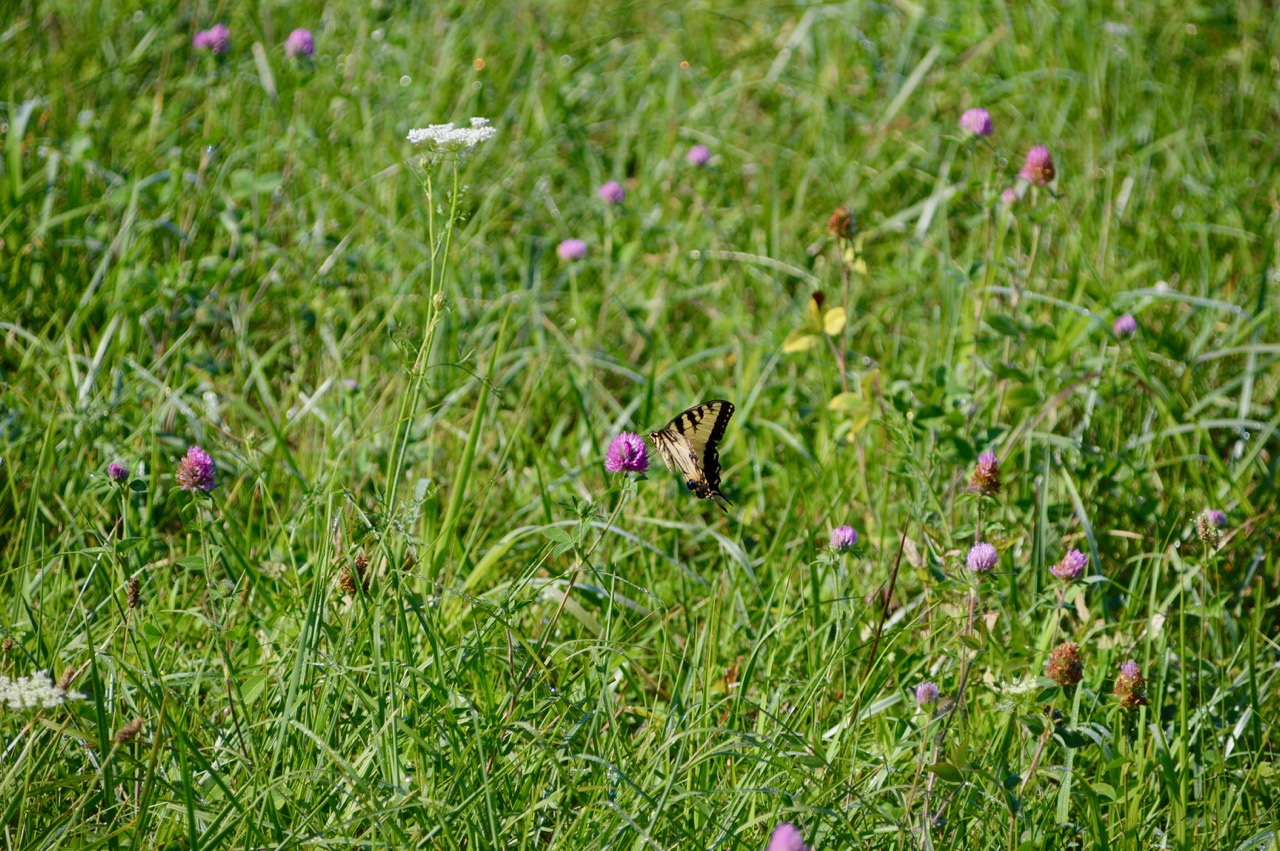 Stella met Sadie and I on our return trip. She had just crossed our path and was headed north when I said "over here", so she stopped and waited on us. 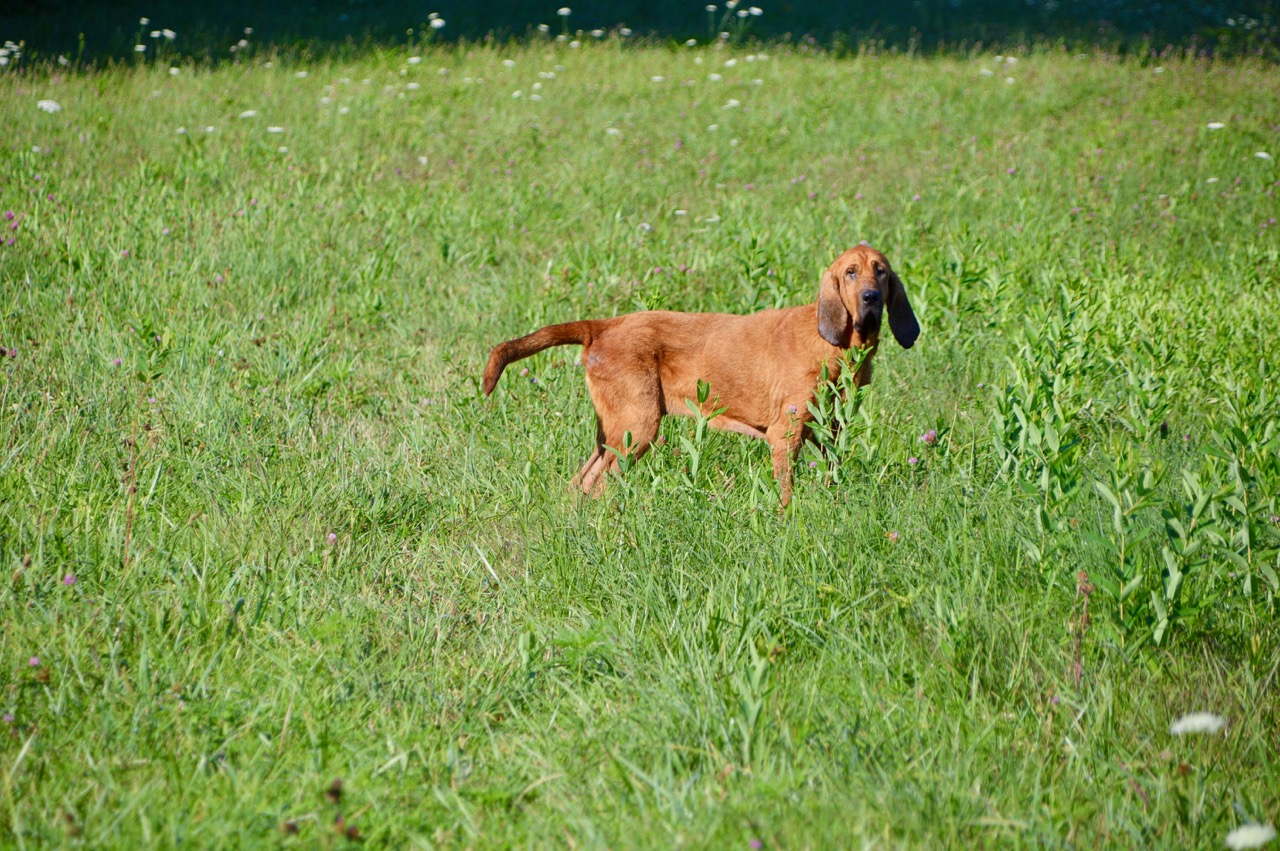 Sadie let the butterflies alone this morning. This one was about a foot in front of Sadie's nose but she didn't charge the butterfly this time. 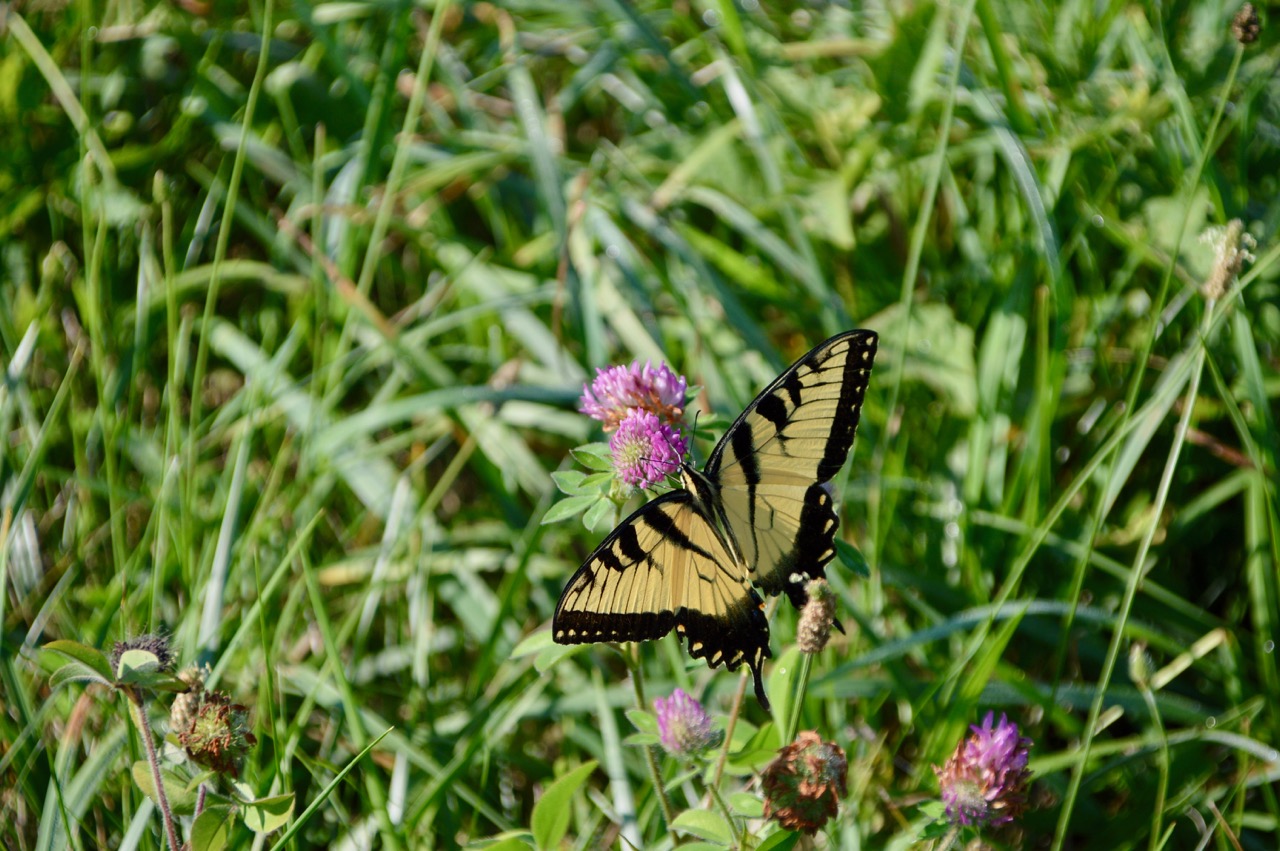 Stella did a little trotting this morning during her walk. She does this in the same part of the path almost every day now. 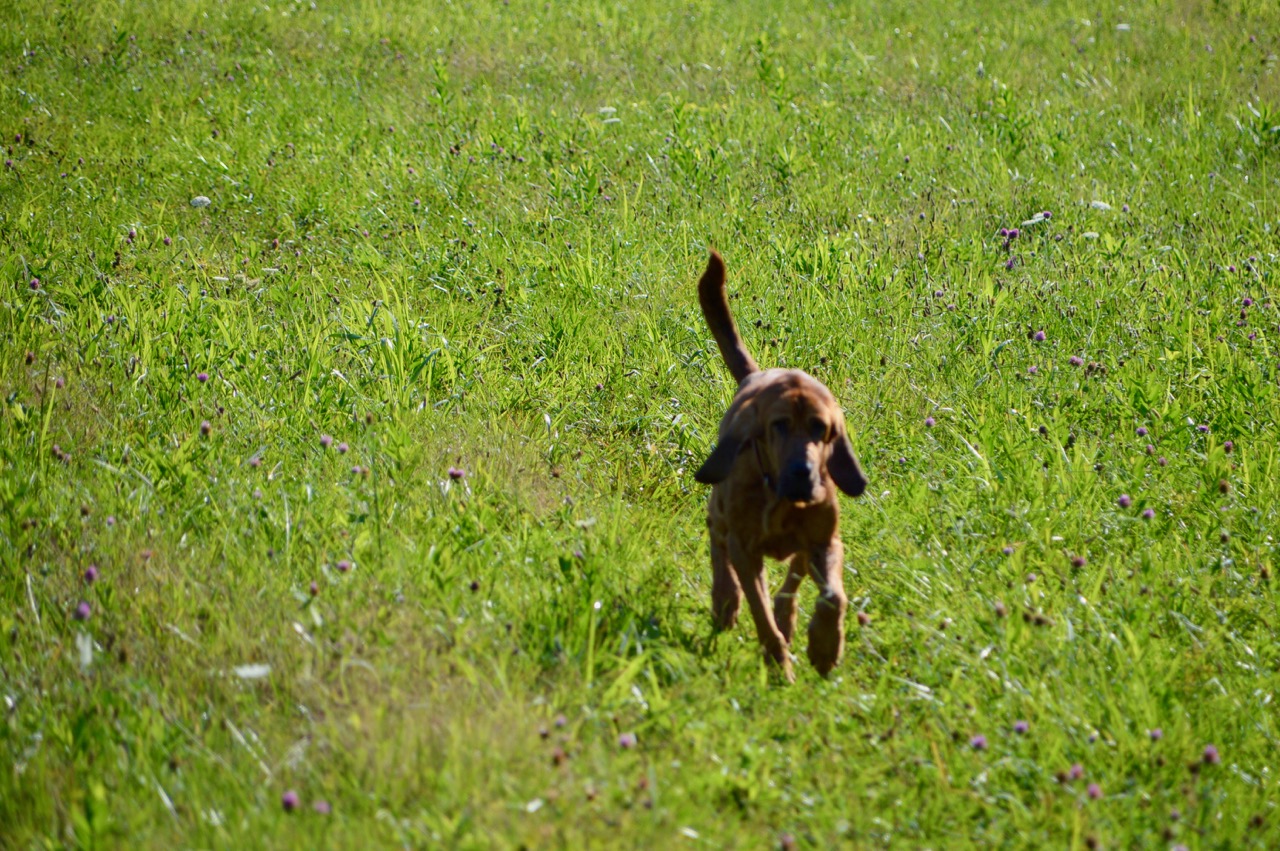 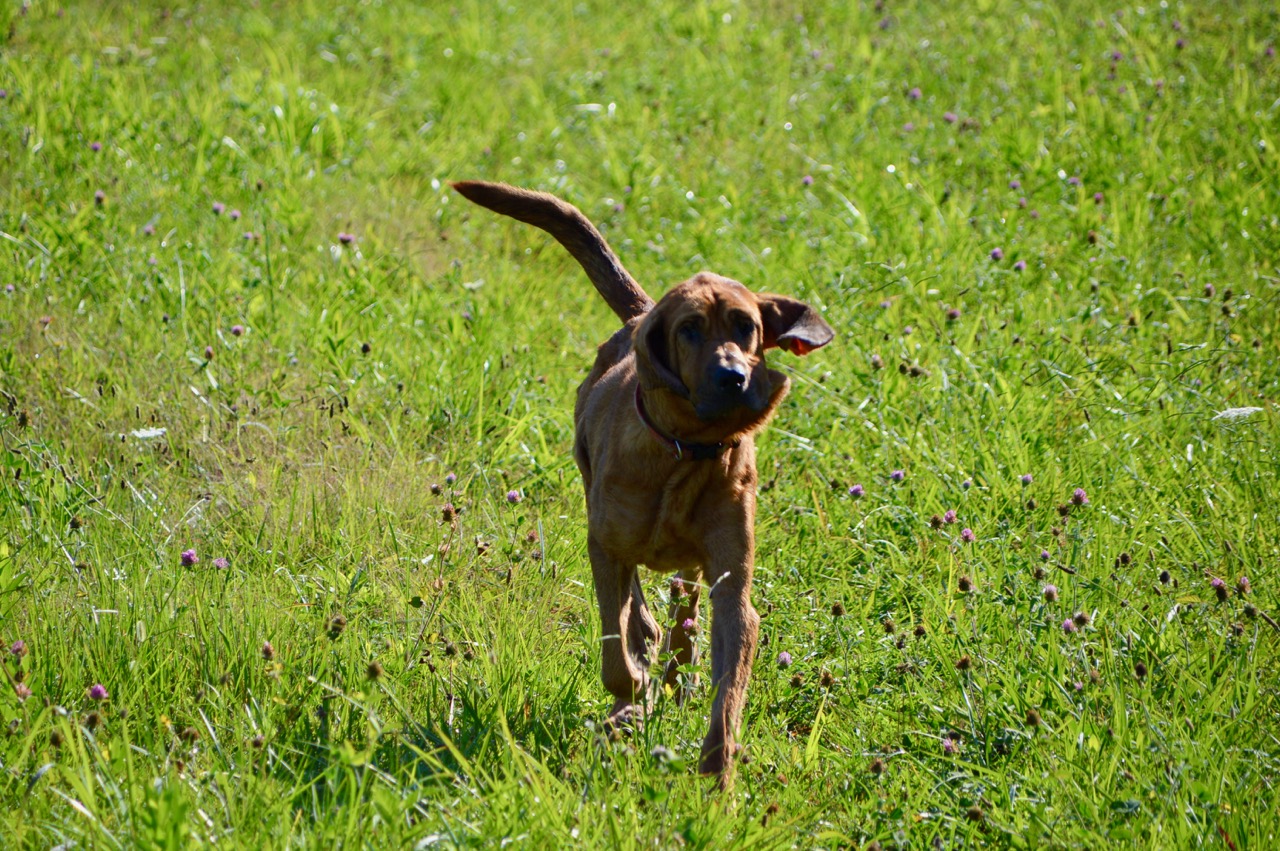 On the way back, both hounds needed to check out the area again where the deer stood. Like me, they couldn't believe they had missed them. 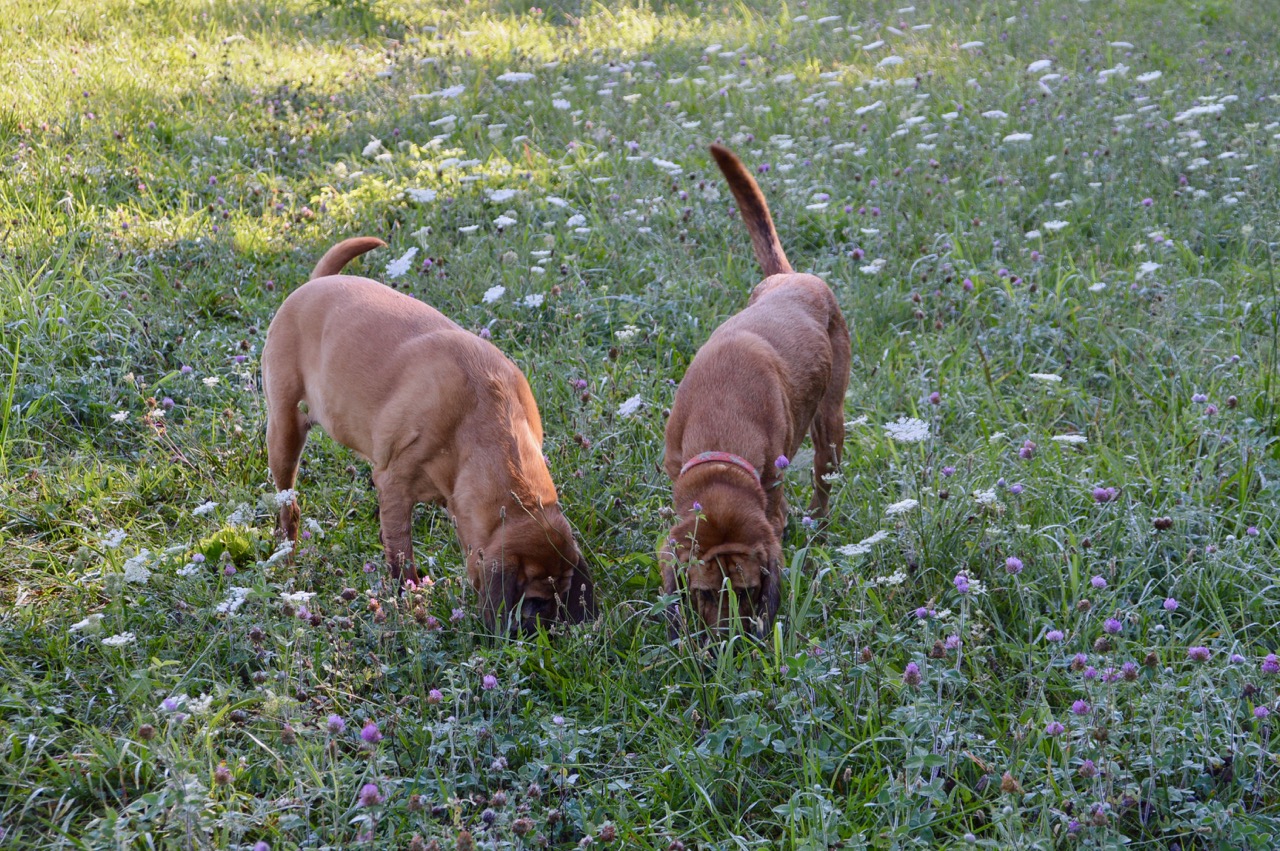 I kept walking and decided I'd let the hounds come back to the house when they wanted to. I guessed that by the time I went in and changed from boots to shoes, then bring the boots back outside to dry out in the sunshine that they would be at the door ready to come inside. 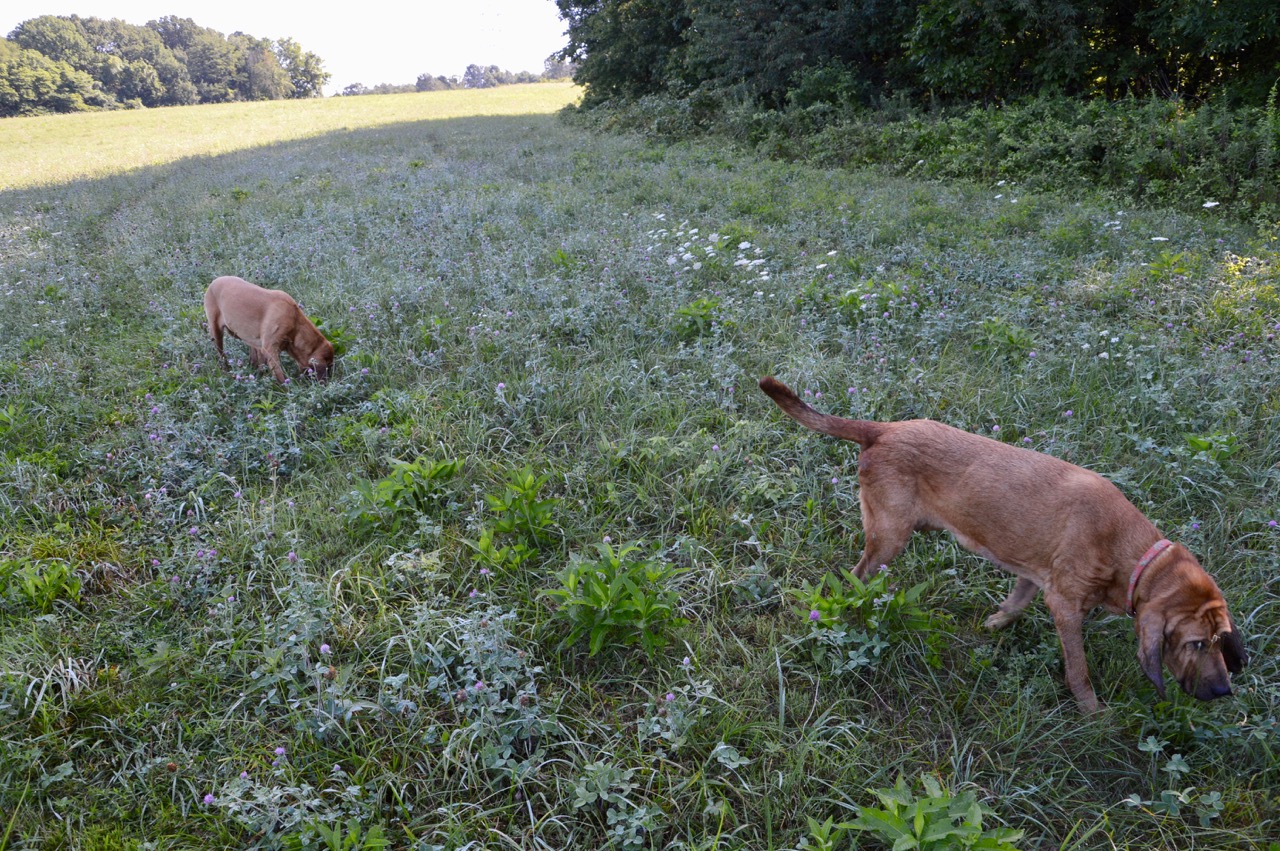 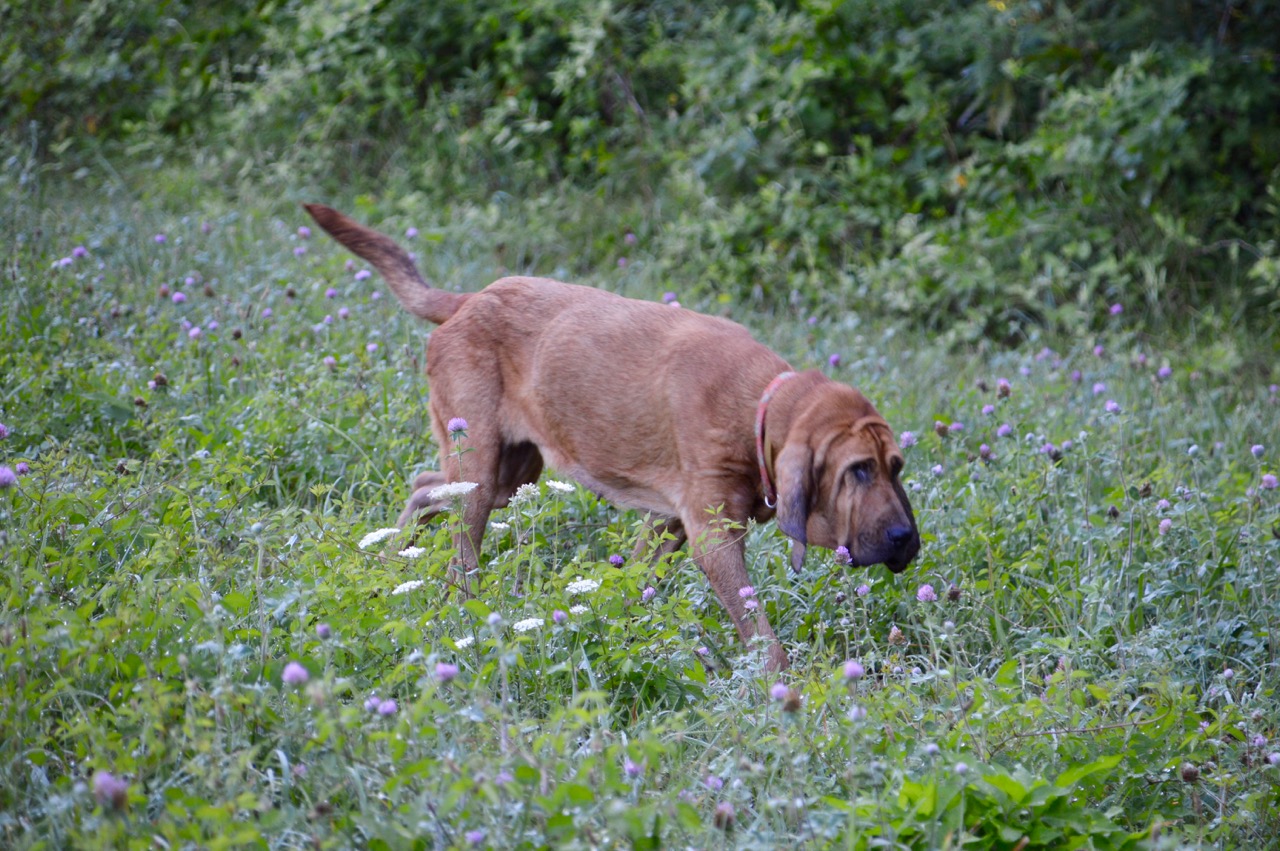 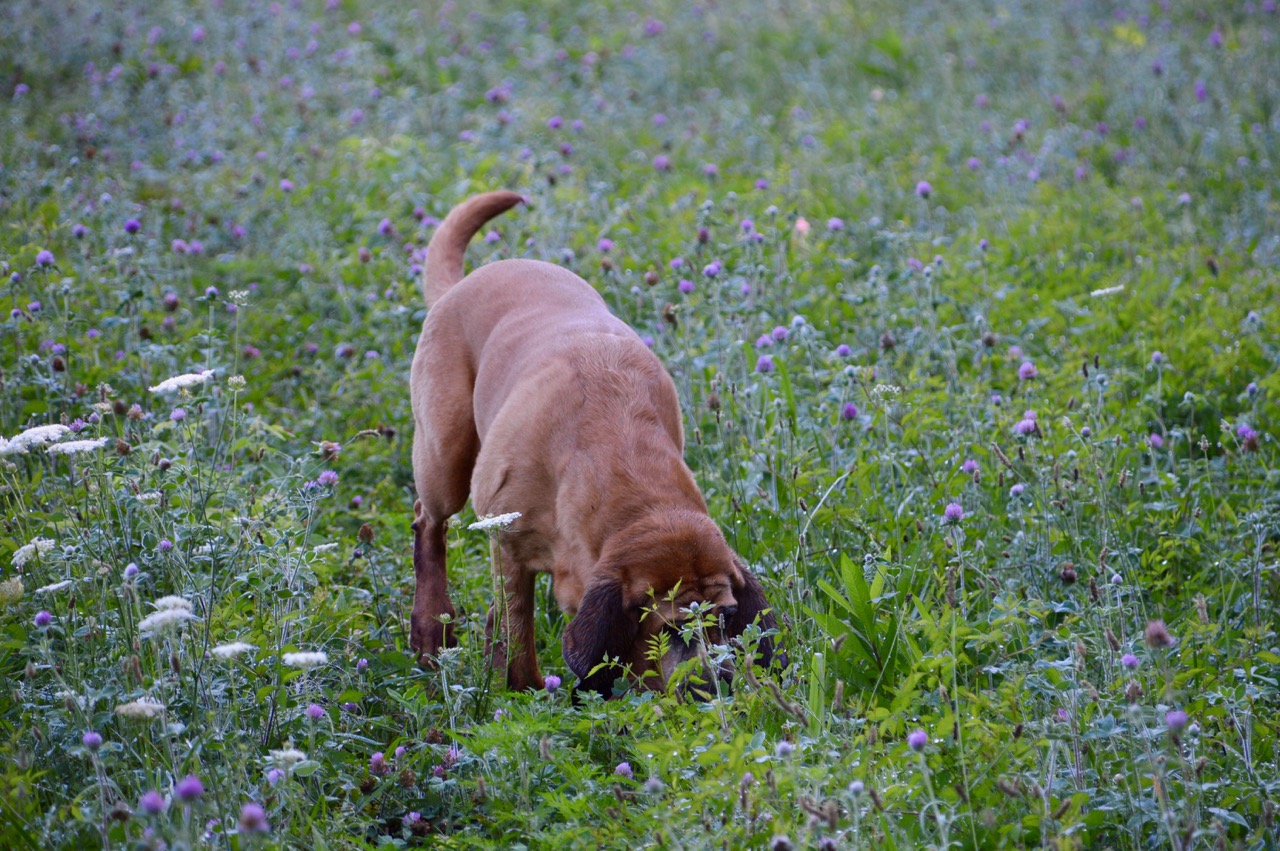 It looks like the utility crew is back to check on their new installation. 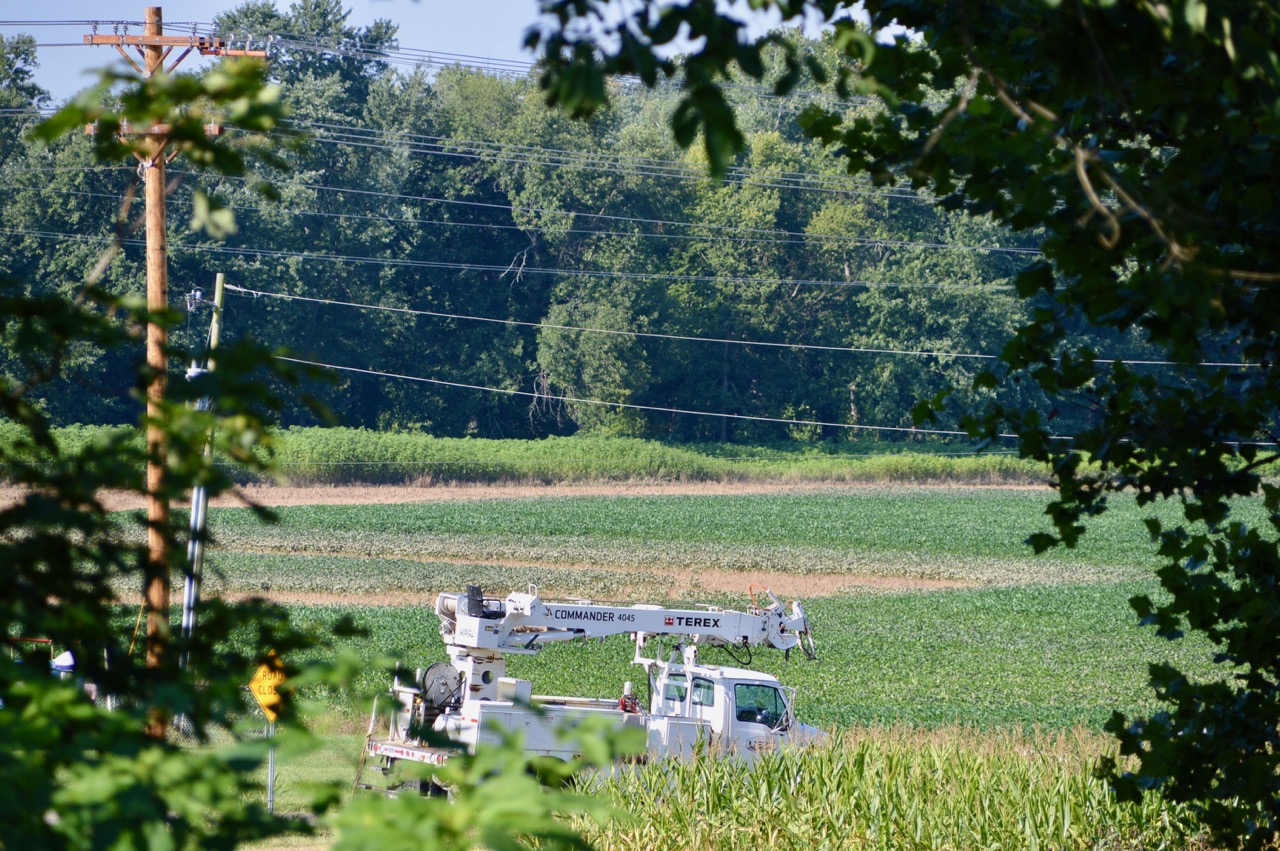 With the forecast of a high of 86° today, this will be the coolest part of the yard. I need to get a nice chair to put out there. 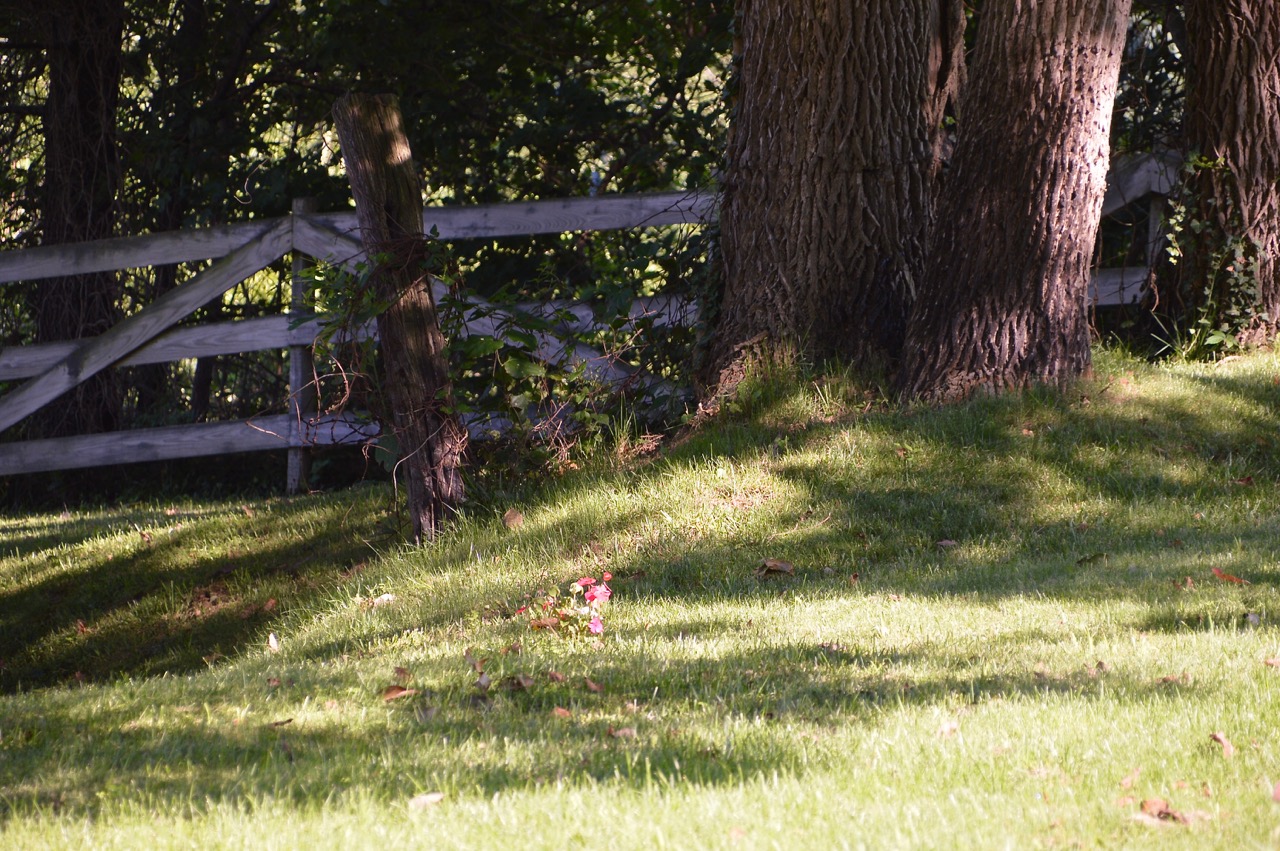 When I got to the corner of the house to go inside, Stella was still back at the edge of the woods. By the time I was at the door to come back outside with my boots, she was standing at the door whining to come inside. 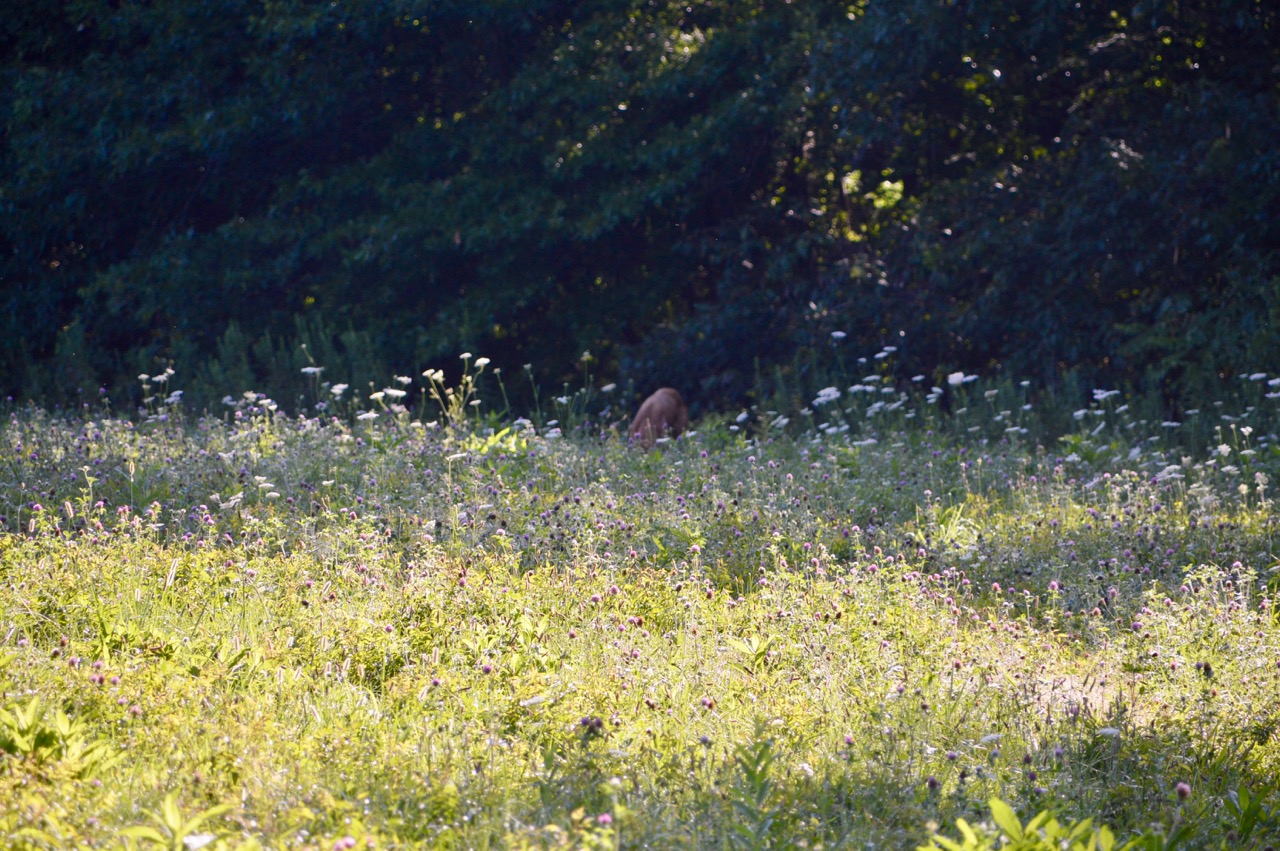 With my new plants watered this morning and the high temps of today I'll not be doing much more outside until later this afternoon. The ACs have already turned on automatically so the heat must have arrived early. It's not quite 11am yet.

With spending time inside today I'll have time to put a couple, yes, TWO more posts today. I have some photos I took Sunday afternoon right after the hounds had lunch ... all three of them spent some time laying in the sunshine, even Sadie and that's something that deserves a blog post.

The other post will probably have a few readers shaking their heads ... but once again I can explain everything like I have before. Basically the day or month might be different than before but the story is still the same ... stay tuned in for that one.

I am in my 2nd business day waiting for the local utility company to at least stop by and check the tree limbs touching the transformer and wires that lead into my house from the utility pole.

I can already see it's going to be another fine day here in 'the tropics' of Southern Indiana.
at July 31, 2017