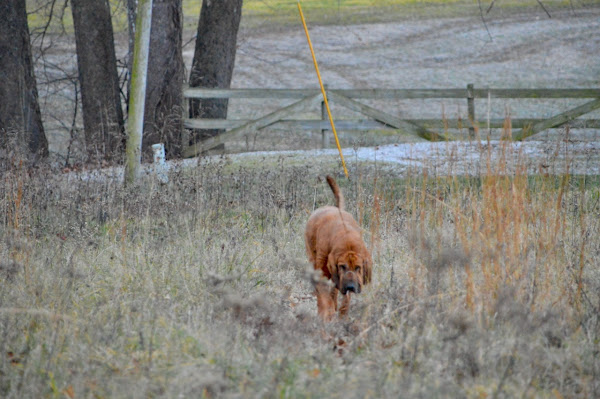 It's nothing really, just a time where I feel somewhat 'weirded out.' It makes me wonder sometimes if this is part of the process of getting older. I don't feel old physically, nor do I think I am old mentally ... I've discussed that somewhere before. Yet, this feeling I've had  so far today (2.5hrs) is something I've felt only in retirement. That might happen only because I am not so busy this time of day where I use to be getting ready for work or at work ... so that's understandable. 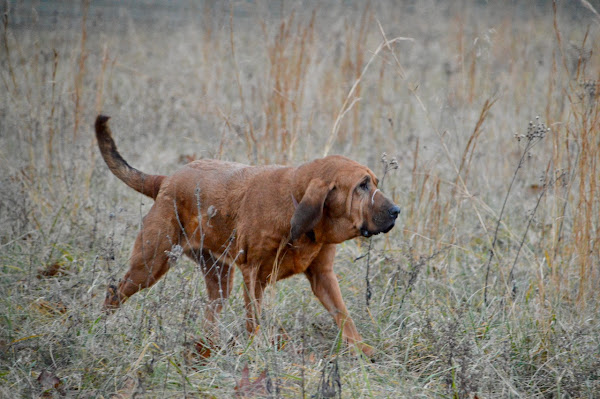 It's not a feeling of anxiousness nor paranoia, just strangeness. 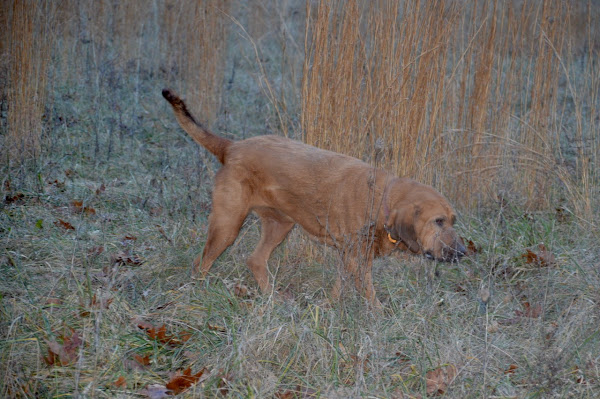 I feel warm in my clothes yet the indoor thermometer tells me I shouldn't feel warm, just comfortable. The weather forecast tells me it's going to be another great day but I don't feel that way. Maybe it's a letdown after all the energy and thinking I did the past few days changing the design of the blog. I have nothing to do here. The dishes are done, house is clean, no urge to keep reading the Steve Jobs book. No urge to grocery shop while I need fruit and salmon. I've been hungry for days but for nothing that is in my kitchen. 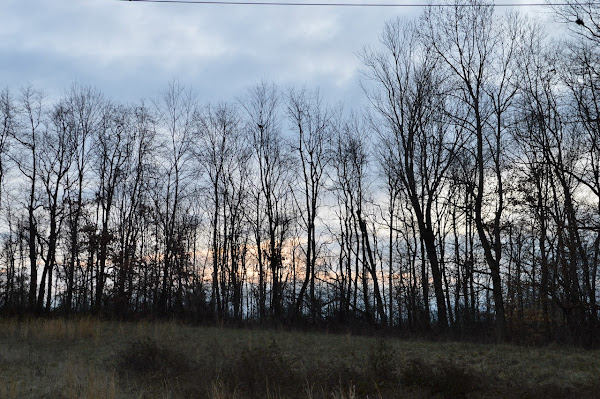 I couldn't help but try to put this mental puzzle together while on the walk this morning. Was I feeling regret about buying a camera when I have a good one in my hand? No. Do I need to go on a mini-roadtrip, get out of the house more than just 25 miles away? No. Is the simple lifestyle routine getting to me? No. 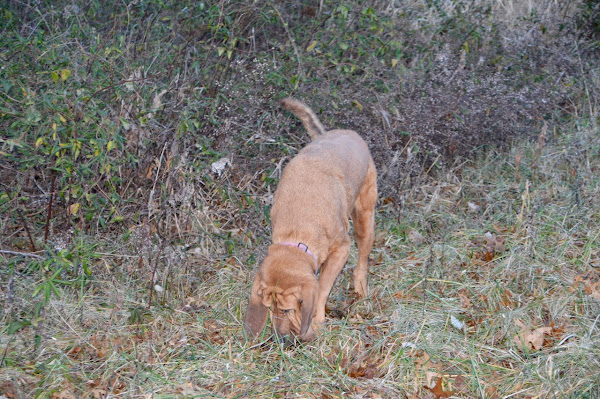 It may have started within seconds of opening my eyes, and taping my Garmin to see the time. Stella and Heidi were both whining as they normally do when they are awake and ready to get another day started. My Garmin's bright white background, brighter than any nightlight was showing 5:03am ... I got up anyway. I was ready to get up. I wanted to get up with a feeling that I needed to do something. There was nothing I needed to do. 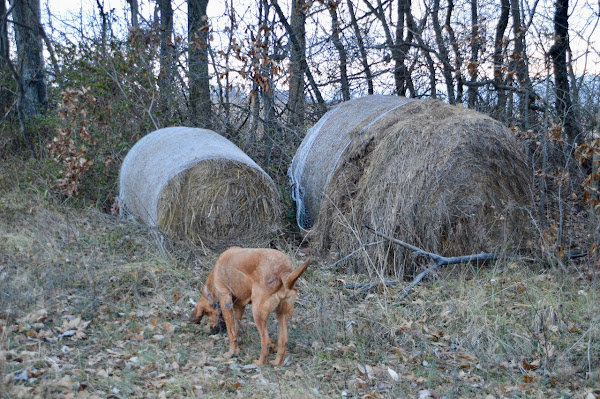 While the hounds inhaled their kibble for breakfast I was making coffee like every morning when I glanced at the clock and it says 6:39am. What ??? I've only been up 10 minutes at the most and it's 6:39am ... how did that happen? So I glance at the Garmin on my wrist and sure enough, it also says it's 6:39am. I misread the time seconds after opening my eyes. It wasn't even close to 5:03am when I glanced at the Garmin.

That is not where the weirdness came from. 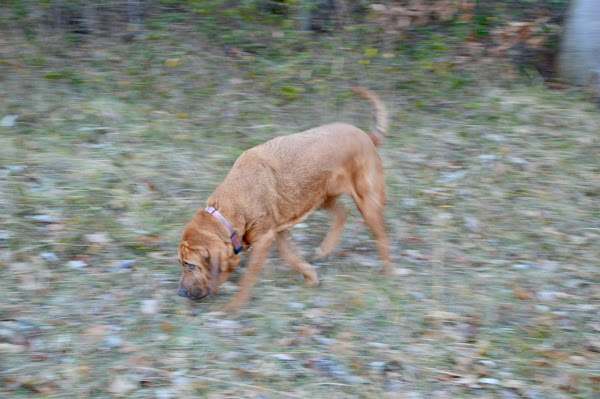 That feeling started somewhere during my first cup of coffee. Different day same routine. Nothing needed to get done. The 'Reminder' program Apple gave me, shows nothing is a high priority. My mind is restless. Ah ha .... restless? It's like anything else when I design a blog, drive cross country, research my next car or truck trade, or plan a camping trip (only a few years ago) ... it's the normal excitement of 'the chase' and the big mental 'letdown' after it has been accomplished. 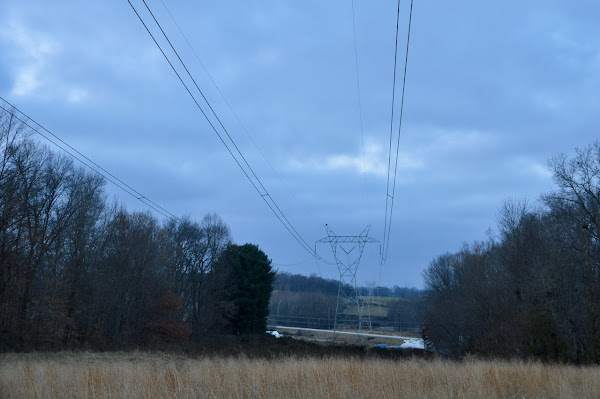 It's always the same. So maybe that is the weirdness I feel this morning. 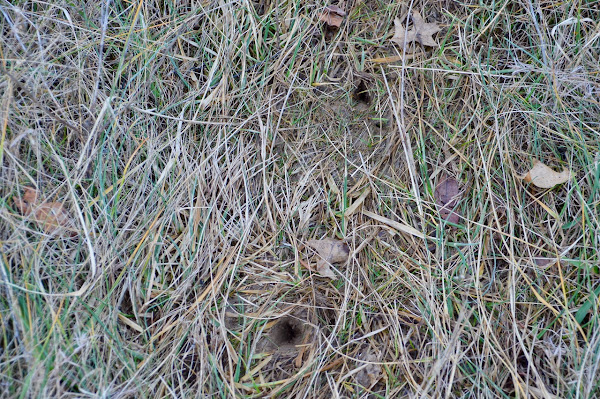 My dad told me soon after his retirement, that he would feel anxious every morning unless he had planned things he needed to do that day. Just knowing he needed to mow the yard (large, acres) would be enough to take away that anxious feeling. Washing the cars? That did it also. Sitting around ... made him anxious. He had to be doing something.

You'll notice the deer decided to follow our return path sometime last night or early morning. Those hoof prints are fresh, within the previous couple of hours? 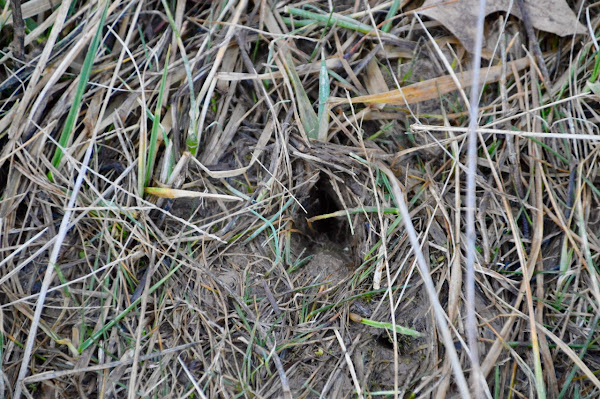 Normally I would have written about these feelings on my private blog just to log as reference, this weirdness. Still, I said last month that I would going to be more open, transparent on this blog. So here it is. Not a big announcement I'm sure but it is what it is I guess. It all stems from asking myself if this type of feeling is just me or is it something I should expect as normal as I get older.

Anyone out there over 66 years of age ... do you have feelings like this at times? Spaced out? Weird? A little lost? 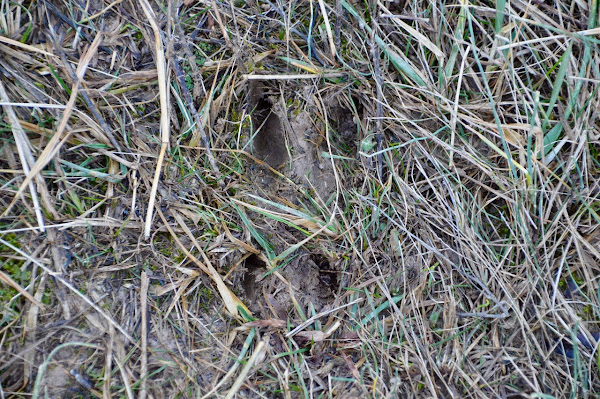 There is more to this, I just remembered what else ... a feeling of being lost. No plans are nice in retirement, no schedules, but maybe they really are needed in this life of leisure. I do have some plans for this spring but nothing is firm yet and they are really dependent on someone else's health if they happen or not. I can still do it solo.

I also don't mind this simple lifestyle the hounds and I lead. We have for years. I'm content, no worries, no crisis that needs a fix. We just are, day after day. (I have just thought of something I can do today, doing two things in one trip and I'll add photos and blog about it later.) 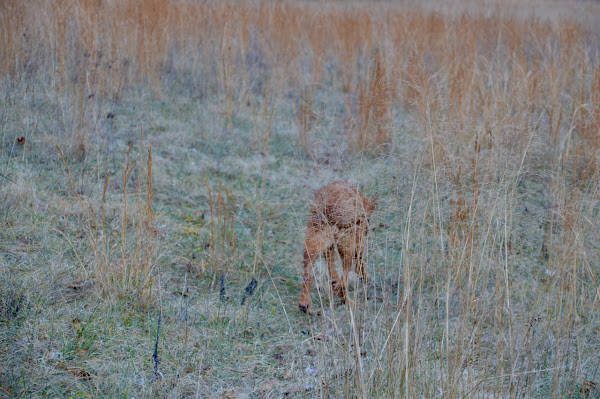 Right now I feel distracted again, as usual. I have forgotten some things I wanted to write about the 'weird feeling' I've had this morning. In fact my mind is just blank about that right now. 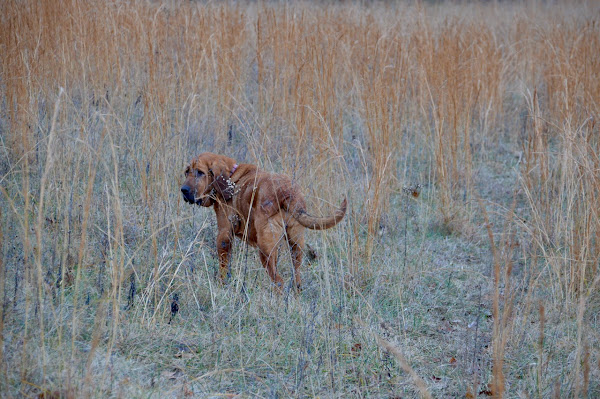 For the first time in years, I have not had the urge to move west. It's January and that urge usually turns into obsessive searching of real estate in Arizona or New Mexico. Not this year. Of course the weather has been fantastic, around normal averages, where we have not dipped into the 20's too many days and have never been in the single digits this year. Maybe that urge to move doesn't happen until it's 20° or lower? 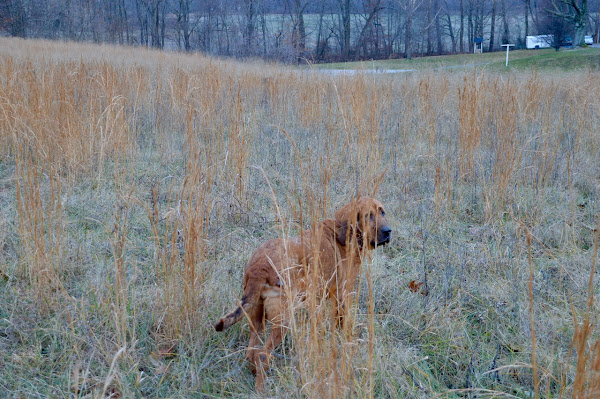 As I move through this post I have realized that all I need to get rid of this feeling is to DO SOMETHING !!!!

Get out of the house, take my camera with me, go for a drive out in the country in the local area ... country is all around me ... with gravel roads, very little traffic on some highways and many paved country roads to choose from that go in all directions. 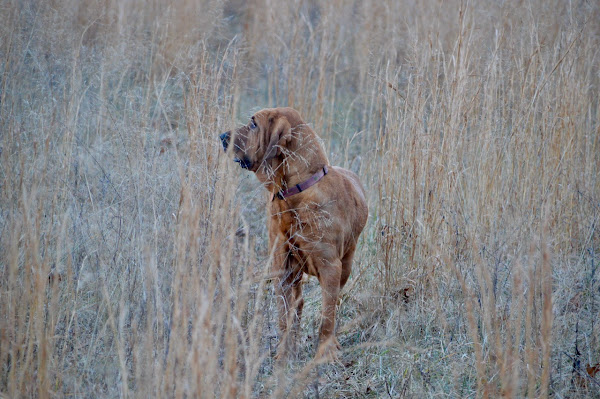 So already, before finishing this post I have multiple ideas to choose from. Those options were not even a thought a few hours ago. It reminds me of the time now, when I would feel like this in the past, I would take my Z4 out for a drive of 50-60 miles. If the weather was good the top would be down if it was like today the heater would be on.

Those kind of trips decreased to almost nothing last summer for some strange reason. The spring or summer day would be beautiful and I didn't want to drive it. That is one of the reasons I sold it. All it did was sit here month after month, not being driven.

Based on the number of times I was driving it in 2018, I wasn't going to put more than 850 miles on it for the year. The times I did drive it I was beginning to feel that car would either put me in jail or kill me. Yes, speeding was a factor. Not a few miles over the limit ... but enough where they probably would have taken the keys away once they caught me.  :) It was hard not to drive the car the way it was designed to be driven.

I didn't like the color anyway. If I ever buy another, it will be the dark gray color, is it called "slate gray?" (I hate the way that looks with the question mark inside the quotation mark) 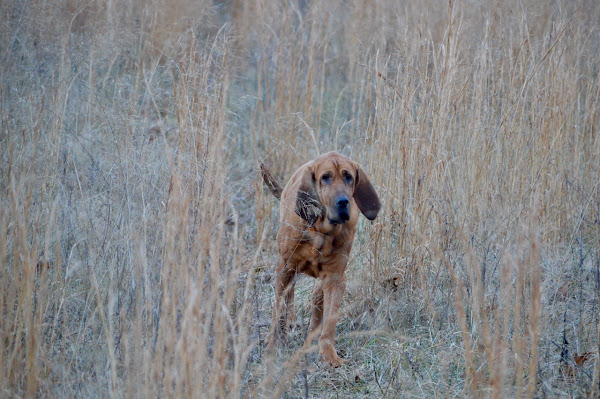 In the 'old days' of many years ago, I would have grabbed my tent, sleeping bag and some food ... then went camping locally out in the freezing weather for a few days. That always clears the mind. Sure I could do that now with the hounds but it's not fair to them to make them stay outside in cold weather, freezing weather just because I have a bug up my ass to go camping. That will only stay as a good memory. 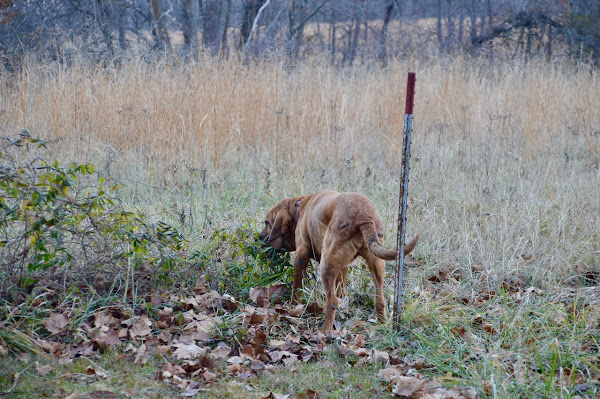 What animal would be this tall to have Stella so interested???? 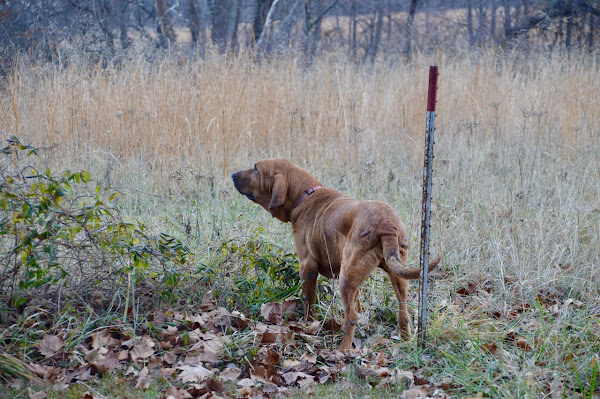 No, I think what I have planned for this morning is going to be a good idea. An enjoyable idea. I'll take off within minutes of publishing this post. I'll post photos and a short blog later this afternoon or early tonight. I have an IU basketball game to watch at 7pm, so the post will take place in the late afternoon unless I schedule it for a later time. 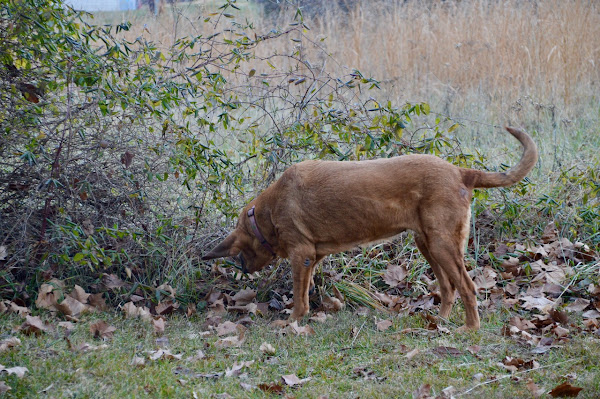 Speaking of blog posts ... with the plan I set for this blog almost a month ago ... there will be occasional posts that is nothing but content. There will not be any photos while I ramble on those posts. I had one the other day and a few readers let me know they liked and wanted photos. Well in the story telling or rambling posts where I have to get something on paper and out of my mind ... photos aren't going to happen in those.

I also like the way the blog looks. I was able to figure out myself how to change the code that would change the colors of the fonts, the size of the fonts, different colors for links, post titles, etc. I did find out that I was wrong about the thumbnail size on the front page. Those small photos are 400x400 and will automatically adjust the height accordingly.

I could spend most of the day trying to figure out how to make them all 400x400 no matter what size they are when I upload them. Not today ... I want to get out of the house and away from this computer. The sun is out and it's not even 10am yet. That's a good thing.

My data leak is also mysterious. I spent weeks burning over a gig per day as I spent most of the day on the computer looking through WordPress themes, changing designs plus my normal internet surfing. Yesterday after seven straight hours I had only burned 358Mb of data.

That is extremely low for what I was doing. Almost half the amount I had last week after the same amount of time. What happened? Who or what was using my data? I looked through my Activity Monitor and found nothing to be soaking up data. Automatic updates were turned off years ago.

Well I hate to end this so abruptly but I have to get out of here ... like right now.

It's another good morning here in 'the tropics' of Southern Indiana.
at January 03, 2019