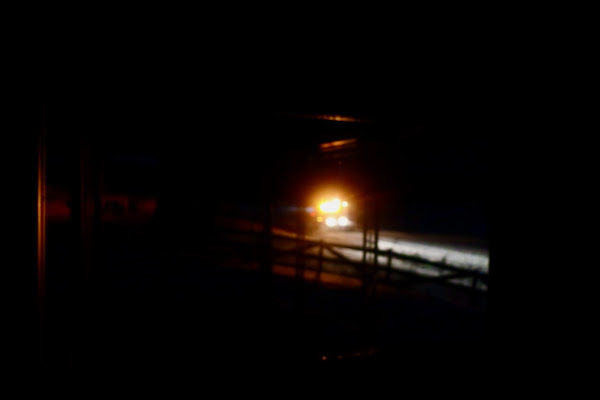 What I expected for weather Sunday morning was right on the money. It looked like and felt like the weather experts were 100% correct even if they were about six hours off in the time it was supposed to start. After watching a basketball game last night, checking my movie shelf, then the DVR recordings and finally channel surfing ... I decided the best thing to do in weather like this was call an early finish to Saturday. Of course when you go to be early you wake up early, and that we did ... 4:05am. I could tell by the ice on the outside of the storm windows it was a very cold night. I glanced on the lower corner of my watch and saw it was 12° ... but it's early so plenty of time to warm up.  LOL

With an official weather advisory out, meaning unless you are going to work or in an emergency situation ... stay off the highways, I didn't hear a lot of traffic this morning but who would when it's a Sunday morning at 4:30am??? All I heard were snow plows passing back and forth in front of the house. I took this photo from inside a dark house at 7:07am ... it didn't turn out quite as good as I was hoping but in a way it's a neat picture. 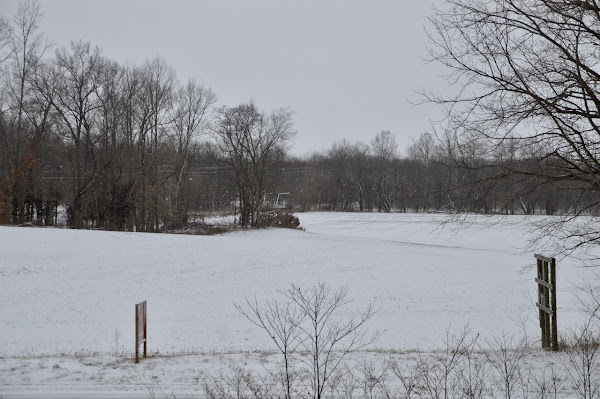 The problem for any travelers today is that with the high winds, and snow that started as rain, it has turned the highways into a hockey rink. Even the snow plows couldn't get to the highway surface so they have spent most of their time spreading the Indiana winter highway mixture of salt and sand. In fact there is a big spot of sand just left of my driveway out in the middle of the highway. Every device I looked at showed 16° by 7am but a 'feels like' temperature of 8°. I knew that Stella and I would not be outside long and we definitely would not be taking the morning walk.

Where Sadie would have been hopping up and down with excitement dragging me outside to do the complete walk .. not Stella. I remember last winter on a day similar to this one, we had not made it to the first turn yet and Stella lifted her paw because of the ice in between her toes plus having cold feet. She immediately turned around to go back home but had to limp as she walked. I picked her up and carried her as far as I could, but at 83 pounds that wasn't far. I had to convince Sadie the walk was called off and we were heading home, she didn't want to quit. 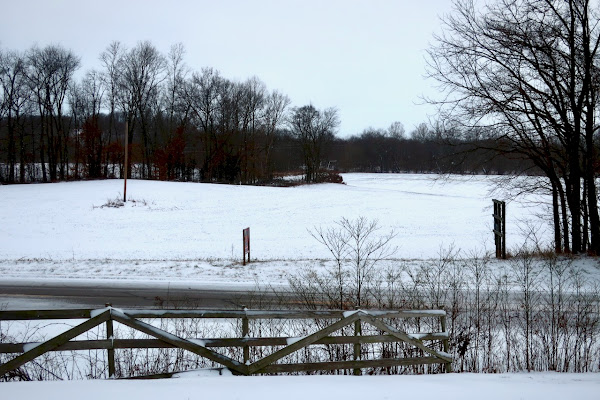 Why two pictures of the same thing? It's a camera comparison. Yes another comparison just because I was curious. Photos from today are mixed and matched between the Nikon D3200 and the Canon G9X Mark II. 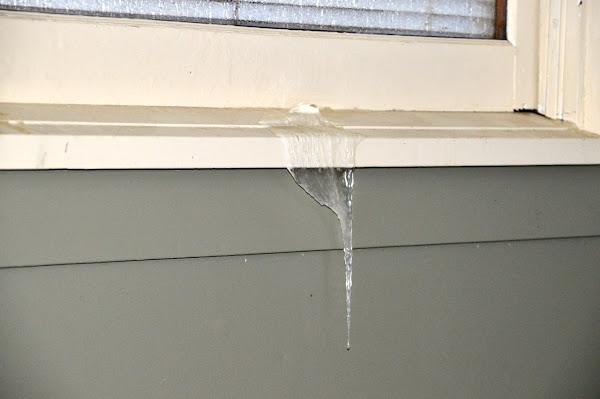 I had let Heidi and Stella out this morning just like aways. Both were at the door waiting for me by the time I finished pouring two bowls of kibble. Yet I will say it wasn't the coldest day I have seen here. There have been times the aluminum storm door has been frozen to the frame where I couldn't open it to let the hounds out. Not today. 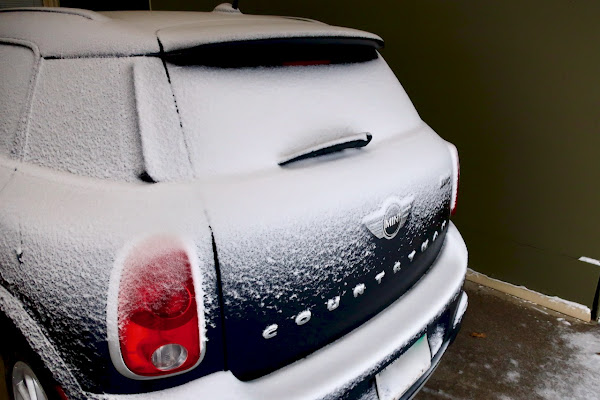 So with Heidi in bed sleeping Stella and I headed out a little after 8am. I explained to Stella that "just because you see me putting on my down parka, my gloves and sock hat DOES NOT mean we are going for a walk." She looked at me as if she understood, so out we went. I took about a step outside inhaling that freezing cold air and hoped that Stella was not going to take too long to pee. I wanted back inside. This only shows there was a lot of wind last night for my car to have that amount of snow parked inside the carport. 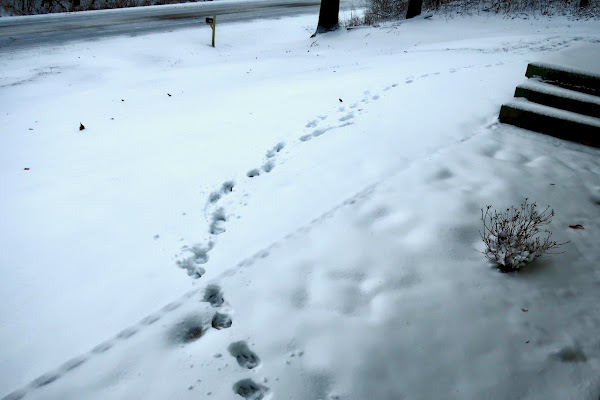 From the paw prints from early this morning in the dark it looked like Stella took off around the house and only followed the house because in the backyard there were no signs of her getting out into the yard ... the yard was perfect smooth layer of pure snow. 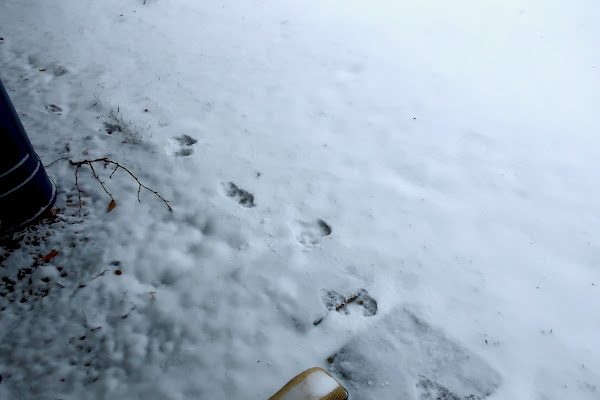 These are Stella's prints returning from her lap around the house and that happened in the dark a little after 4am. 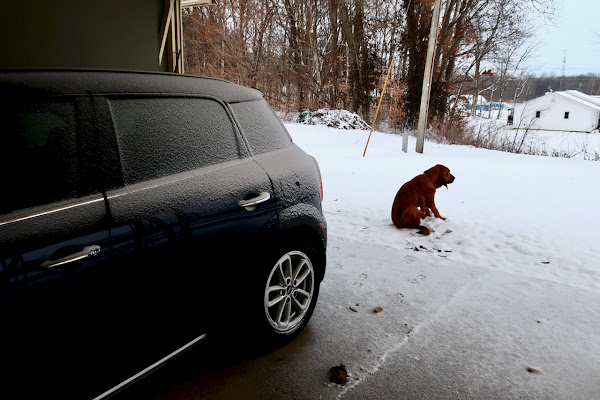 I will be changing the dog food when I buy the next bag. Same company but a change from chicken to lamb to see if she scratches less 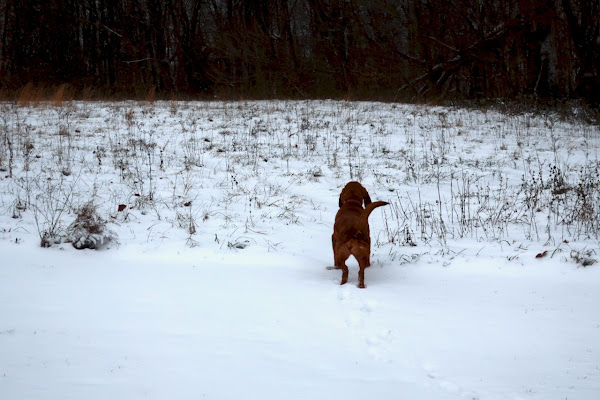 Stella THOUGHT she wanted to go for a walk. By the time she got where she was in that picture, notice that left rear leg ... she's cold. Stopped in her tracks as she was trotting to the field. 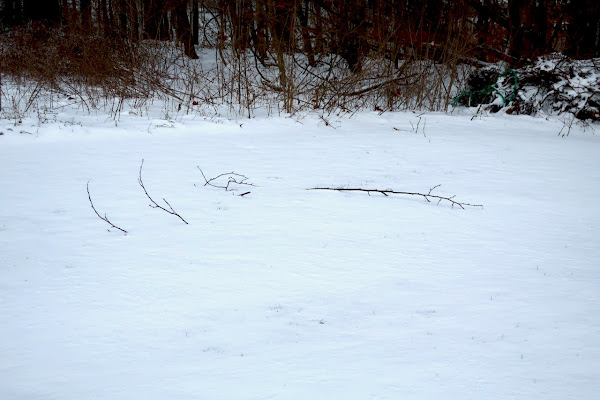 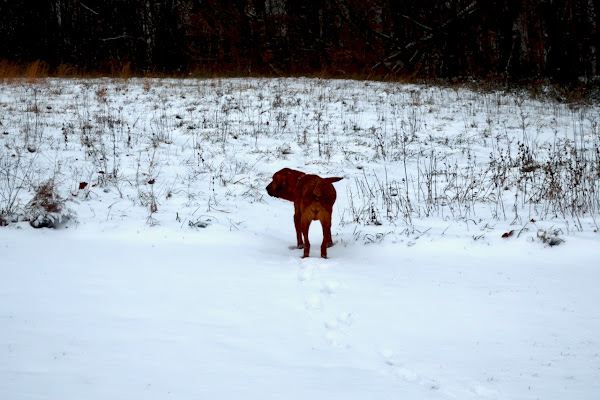 She didn't move but stood there while I took pictures, wondering  if she really wanted to go out in the field. Obviously she didn't have to dump her tanks that bad and turned around the same time I did, heading toward the house. 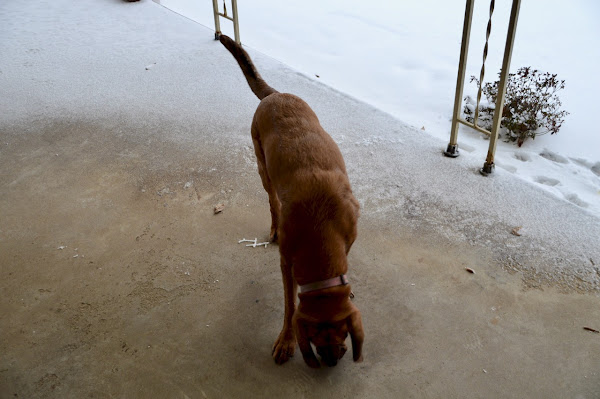 She wasn't finished though. While I looked around a little, without going out into the yard, her paws must have warmed up. 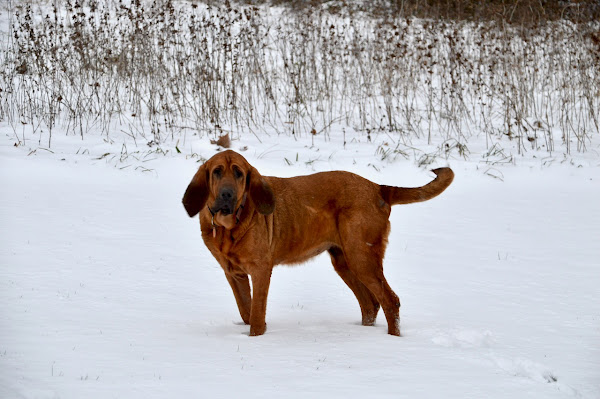 She's excited jumping around and goes running back, jumping into the snow in the backyard as if she and I were going on the walk. There is probably no more than 3" of snow but it's too cold for me, I'm not going anywhere. Besides, I didn't have my boots on just some Nike shoes. 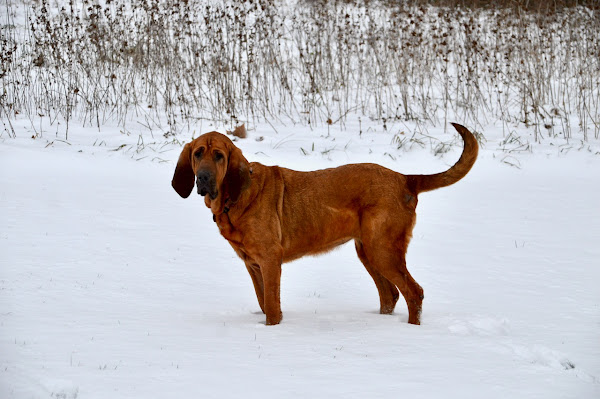 She tried her best to convince me to go ... but it wasn't going to happen. 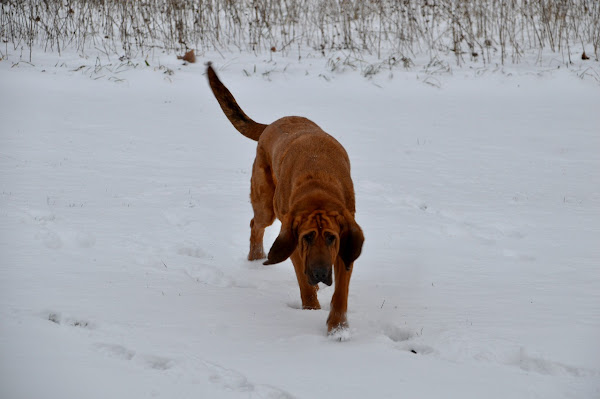 She knew it was time to come back inside.

Right after the hounds had "Brunch" ... I asked Heidi if she was coming outside, the normal routine after they eat. She turned and sprinted for the couch ... an obvious no. 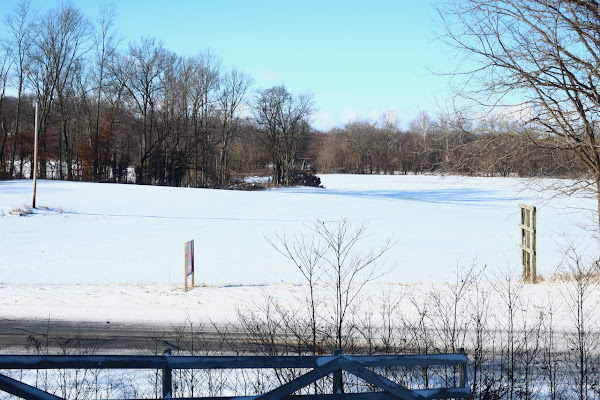 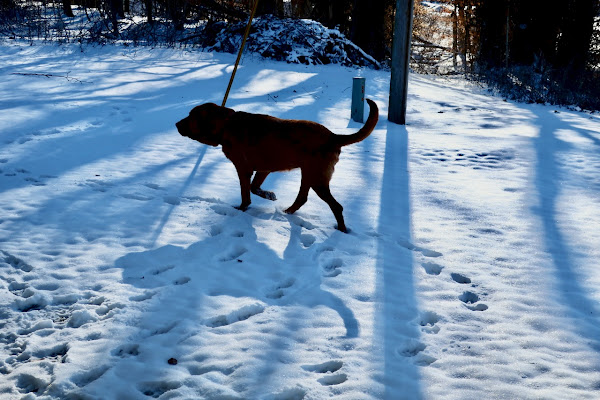 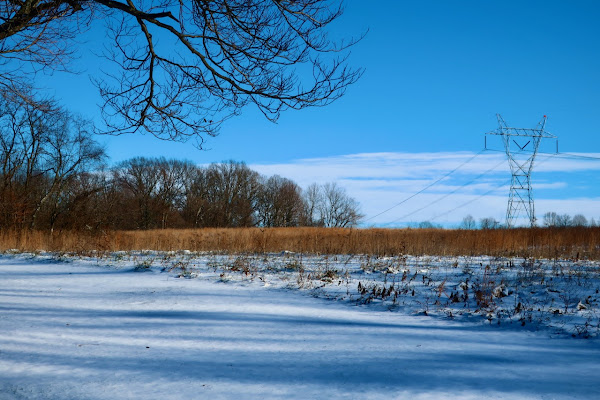 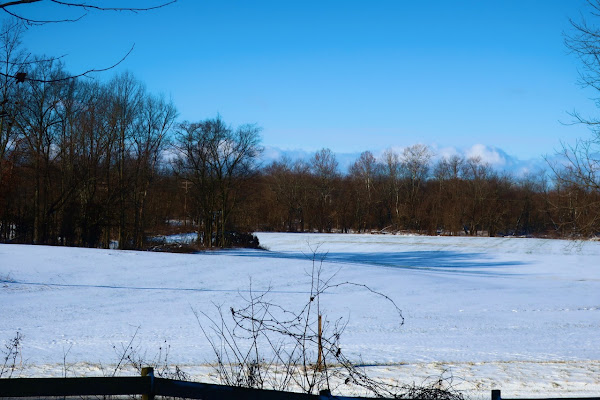 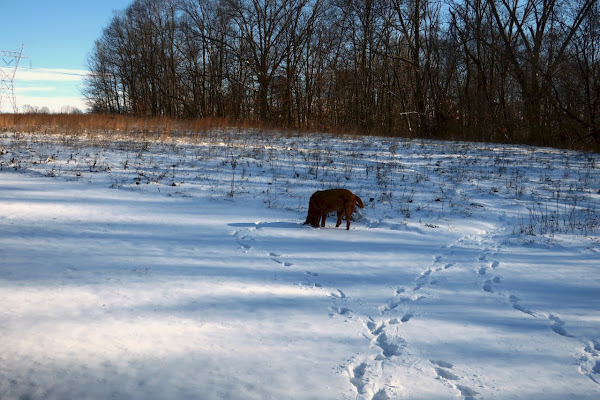 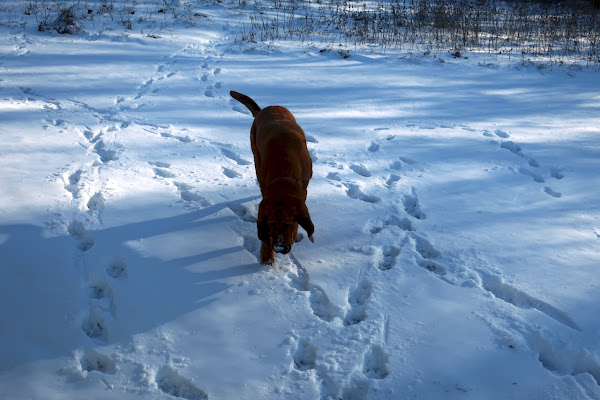 Stella did what she had to do in quick fashion and slowly migrated back to the house. 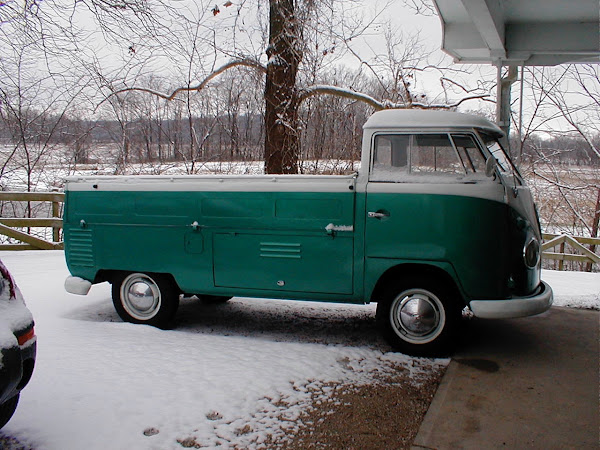 This weather reminded me of my 1961 VW Single Cab pickup I had in 2004. With a brand new Jeep Liberty parked next to it, this truck was the best vehicle to drive in any amount of snow. Due to its low gear ratio, there was nothing that would stop this truck from snow to sand. I drove it daily to work during the bad weather days. Of course like all old VWs, the heating system was based on the heat produced from the engine. I had a control inside that would adjust the amount of heat I wanted ... but the faster you drove the hotter it got, so I 'd turn the knob that was below my seat counter-clockwise to decrease the amount of hot air coming out of the heater. That large door on the side is the "Treasure Chest", storage under the bed of the truck, with doors on both sides. 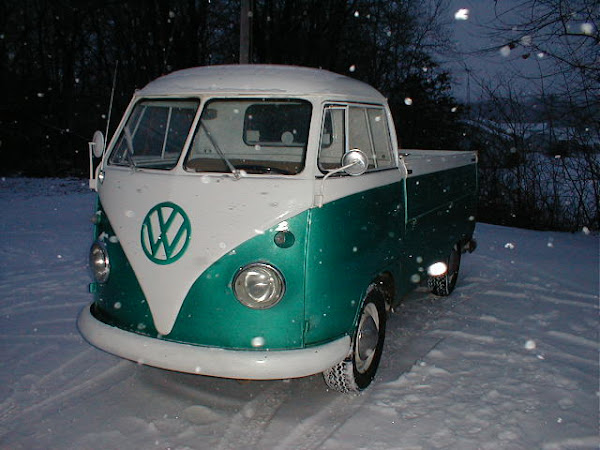 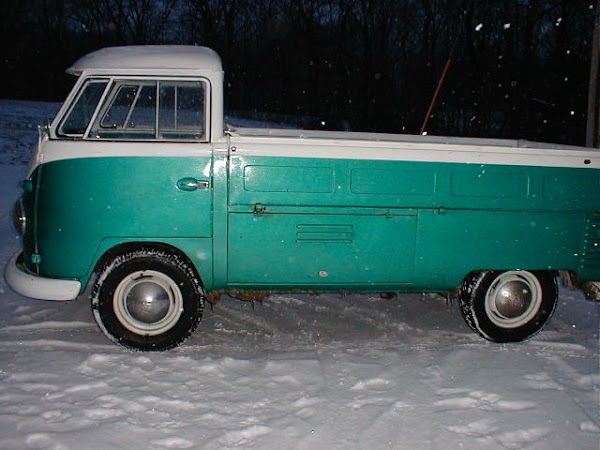 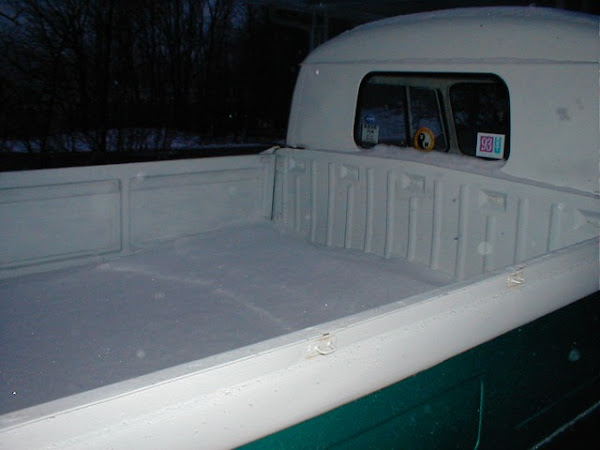 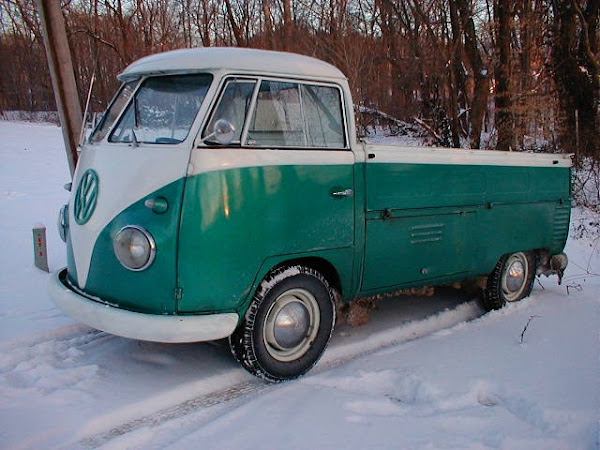 With the forecast telling me it's not going to get warmer today even with the sunshine out, the hounds and I will not be doing much different from what we did Saturday afternoon. They will sleep after their lunch while I start watching the first of two NFL Playoff games at 3pm or so. Compared to the pounding the Northeastern USA got the past couple of days, our small amount of snow doesn't mean much. I'll take it though. Looking again at the 10-day forecast, our temperatures will bounce back and forth with high temps one day at 45° and a couple of days later 16° ... it will be yoyo type of weather as we finish January.

I tried Firefox again the past two days and still found it to be nothing more than a data hog, using twice as much data looking at the same webpages I do every day, including blogging, as I used with Google Chrome. So I'm back on Google Chrome today.

I mentioned to my long time friend Ralph that I had bought the point and shoot Canon G9 with the 1" sensor. Ralph has been a camera buff all the way back in the 1960's when he was already shooting 35mm film and having them developed into slides. He had recently bought a new DSLR but said some interesting things about my camera. "that sort of camera can be SO nice because they are SO CONVENIENT!! If I had it to do over, I likely would have not allowed myself into buying the DSLR ... I'm just losing my motivation to strive for high level pictures. A pity actually, but a few snapshots and I'm kinda' ok."

So maybe I am not going crazy after all thinking my Canon G9 could replace my Nikon D3200 for most of my photography.