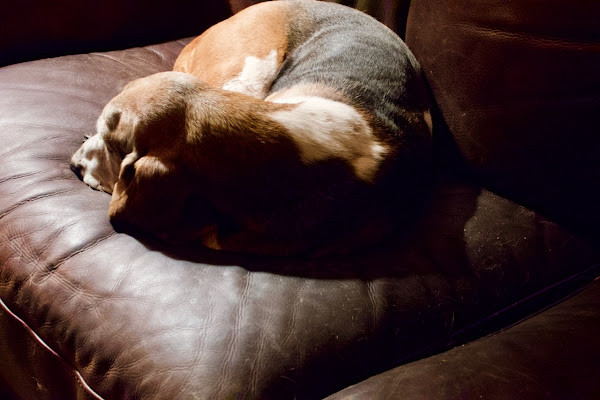 I've done it again. Only this time it's not in the middle of the week but a Saturday???? It's never a good thing to wake and not able to get back to sleep when you didn't go to bed early to begin with. Evidently I had too much on my mind when I went to bed after a Friday filled with Stella's separation anxiety, a new watch, a new camera, rain, and the normal million thoughts being processed by my peabrain. 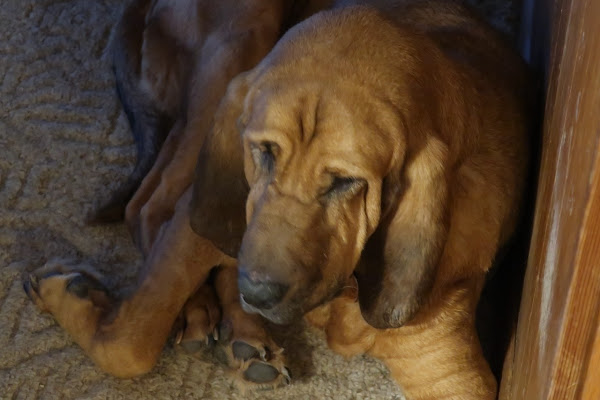 Before I go any further I just noticed on my Activity Monitor that tracks all hard drive activity, just like that almost 800Mb of data was used. I went into the Google Data Saver which will tell me in order what websites are using  up the data. For the second day in a row WORDPRESS .COM is the guilty party!!!!

It used over a Gb of data yesterday, which is abnormal. I can't afford to let it use that much data so off to the forums I will be this morning. As a test I closed Google Chrome just in case Chrome and Wordpress are not working well together. I opened Firefox, all the same websites I closed on Chrome. I added only TWO images to my Wordpress media library ... TWO PHOTOS ... then watching the data counter go to 119Mb !!!!

Luckily with the Wordpress Premium plan that I had to buy so I could use my own domain name, which blocked all of the automatic advertisements, has a pretty fast email response team on the weekends, so I'll get an answer to this problem pretty quickly. 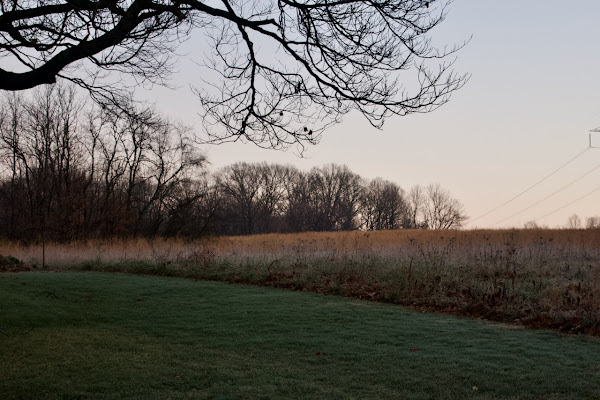 It was a 'big' morning this morning. There were some "firsts" going to happen which would result in answering some questions I had lingering after the two purchases yesterday PLUS how Stella would be feeling today after all the fruit she ingested yesterday.

One of the differences was using the Apple Watch's activity feature on my walk. The Garmin Sport was easy but lately did not lock into the GPS so I had to use their alternative "indoor walk", which kept time acccurately but decided the walk distance was .22 of a mile. This morning it was a single tap to start the clock and a single tap to end the walk. Instantly I had more information in front of me than ever before. It was detailed to the point of telling me I had climbed 32' during the walk. 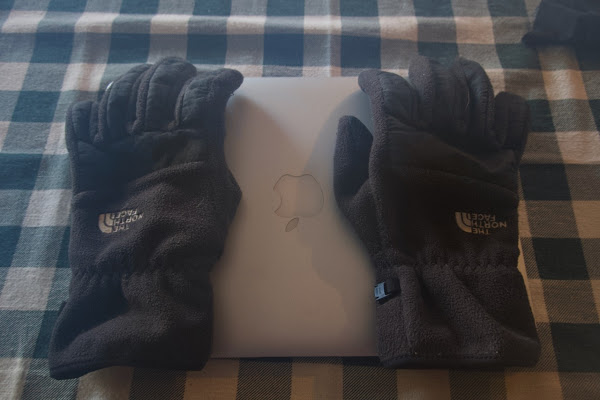 Not only using a smaller camera than the Nikon D3200 today, but how well would that work with me wearing these gloves in temperatures a little over 32°? I had tested these gloves on an old Nikon CoolPix 3100, which is smaller than the new Canon G9. The gloves worked okay when I tested them. I did that test before I made the Canon purchase online. 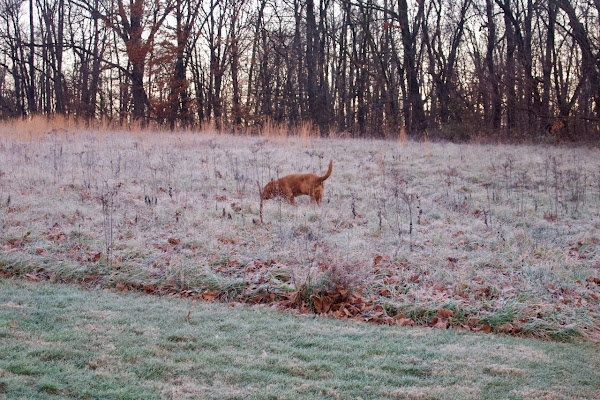 Since we were up to start the day at 4:53am, I knew that Stella would be pretty anxious to get outside and start the walk. She was but she was about two hours too early for that. It was also dark outside so she was going to have to wait until the normal time of 8am. We actually started five minutes early. As soon as the door was open she went running for the field. That fruit was about to clean out her digestive system. 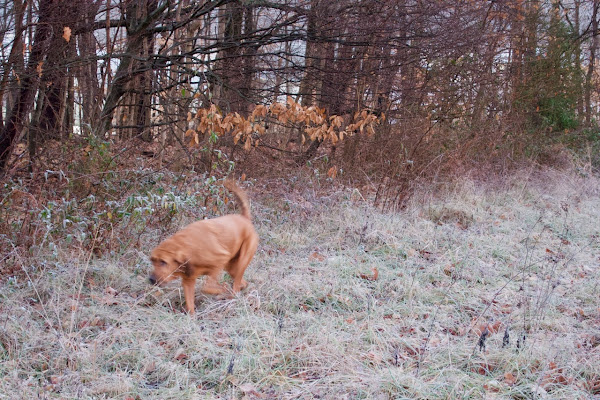 I have just the basic settings in the camera tuned in. I wasn't sure how the photos would turn out, so you can see for yourself. A lot of the photos I did not have to edit at all, some others I added a little color but overall very little editing on any of these early morning photos. I have no doubt there are some settings I can change to fine tune the camera for our next walk, thus improving some things in the photos. 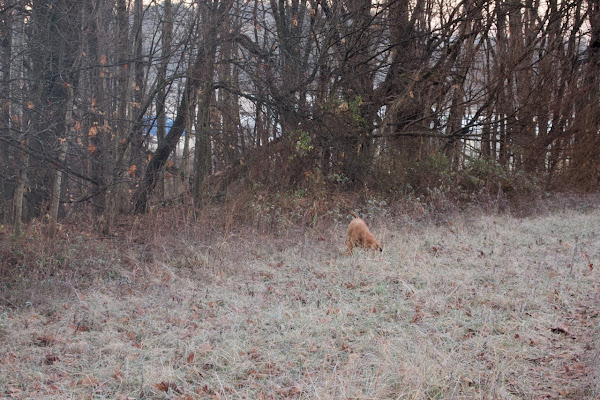 After I downloaded them into the computer, my first impression was "these photos looked real" ... I mean, the grass color, the trees, etc looked exactly as they are. Yes, they are drab but it's winter in the Midwest. I could tell a slight difference in these photos compared to the ones I'd take the same time of day with the Nikon D3200 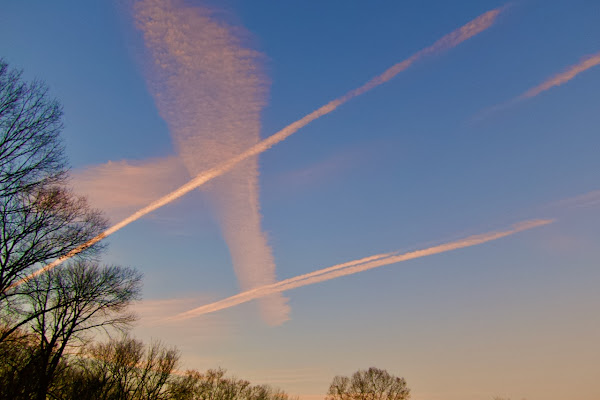 A lot of early morning air traffic this morning. What is interesting they are coming from the south, so I am guessing the Louisville airport would be the starting point. I live half way between Louisville KY and Indianapolis IN, almost to the exact mile between them. 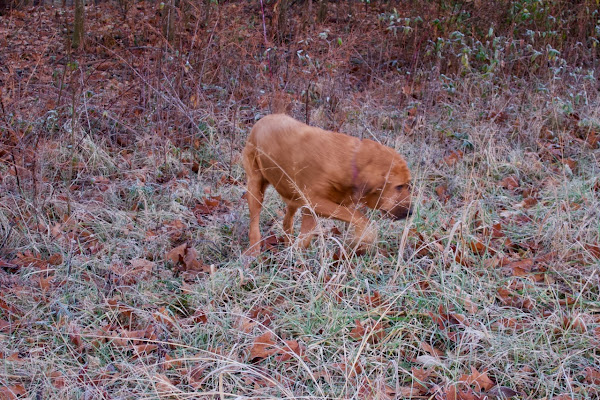 Stella seemed more interested in tracking scent this morning rather than eating deer scat. That is always a good thing and it means I can do less 'verbal herding.' 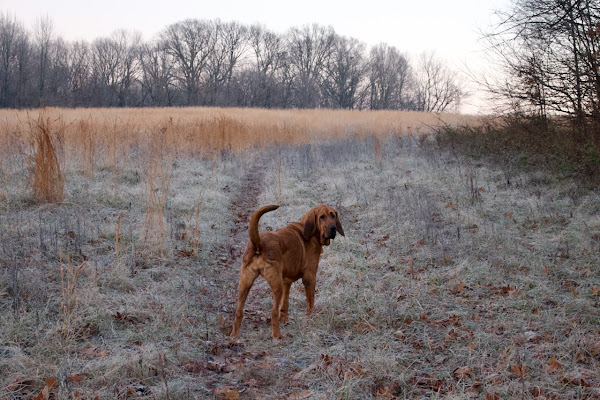 Evidently I wasn't walking fast enough for her. 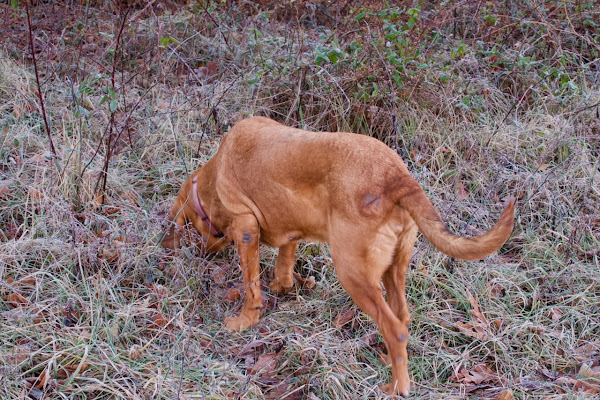 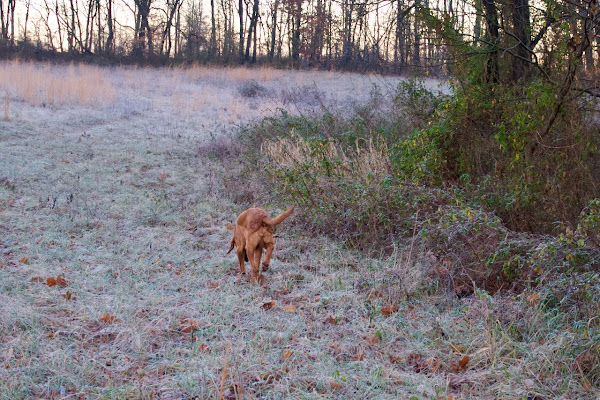 As she trotted through the field and I walked through the field ... frozen grass and leaves would crunch loud enough for me to hear. Yet the path was very soft and in some spots muddy. In the one spot I fell in up to my ankles last week, there was standing water where my boot print was today 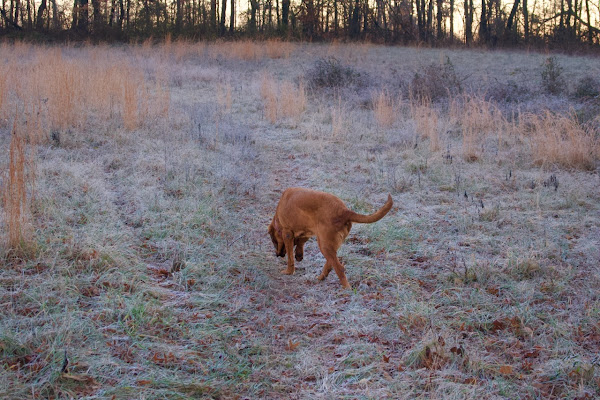 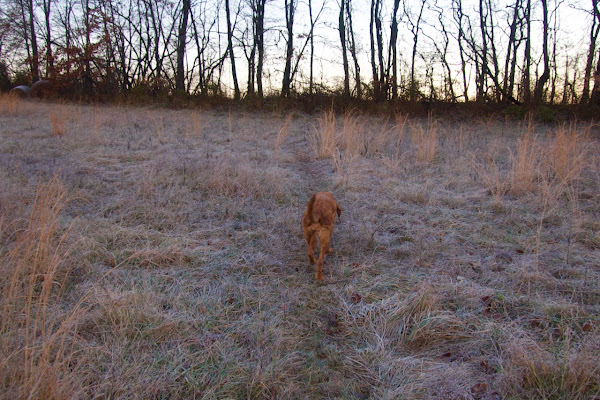 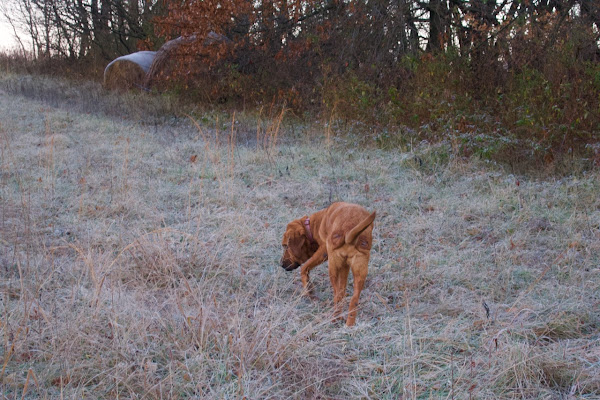 She stayed on the path for most of the way. Don't ask me why? I don't have any answers at all about how she operates. She is definitely in her own little world 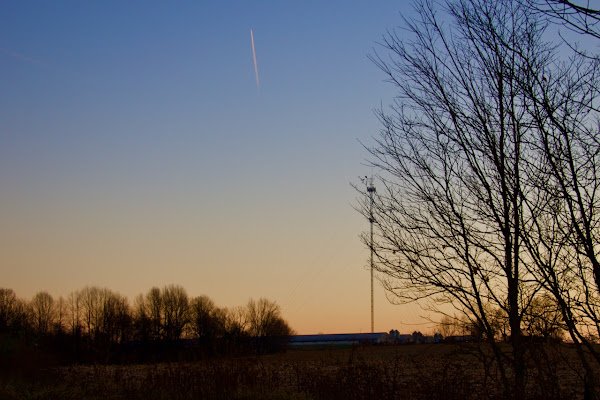 This was a test to see how clear/sharp that AT&T tower would be from a distance. I thought I'd back off the zoom a little so I could catch that airliner in the picture. I found the much smaller camera very easy to operate. 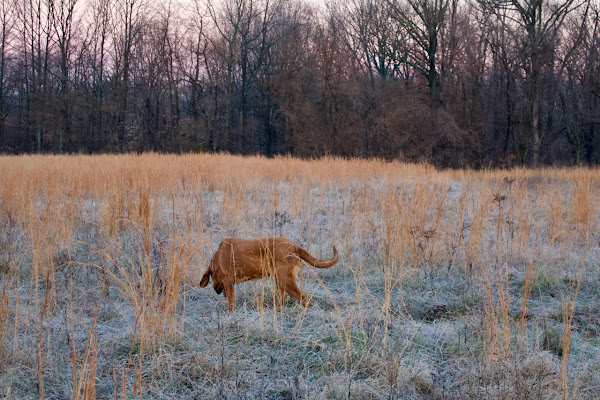 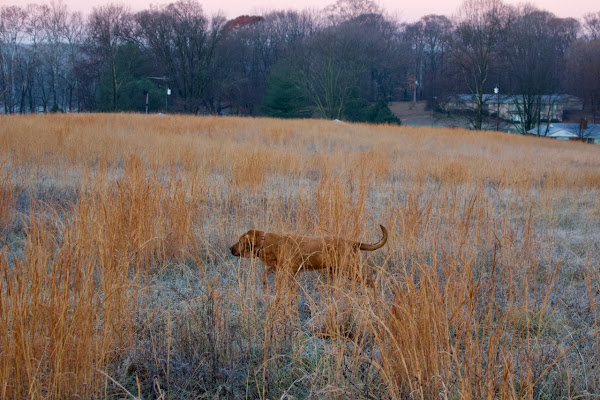 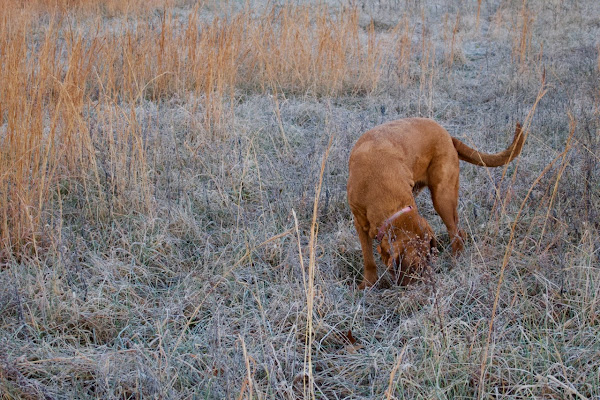 She was on her own for most of the walk, after we made that first turn. 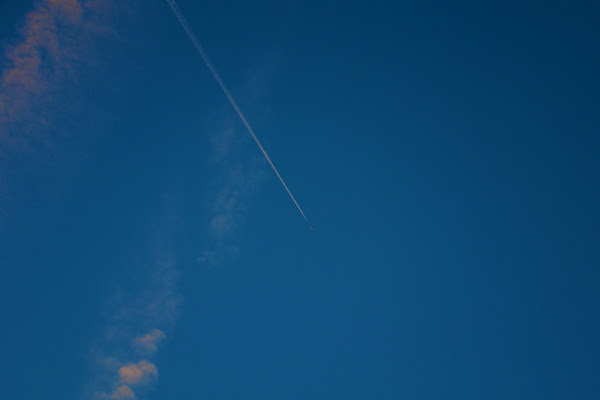 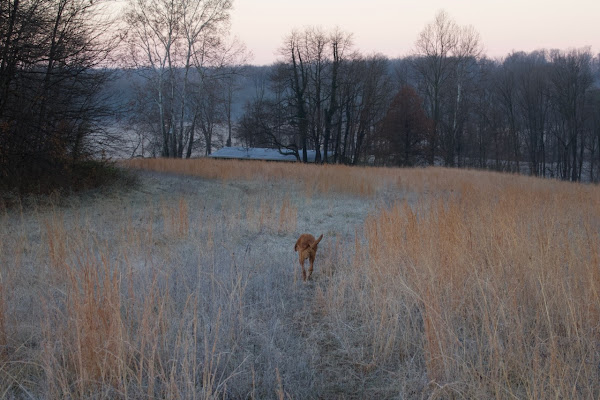 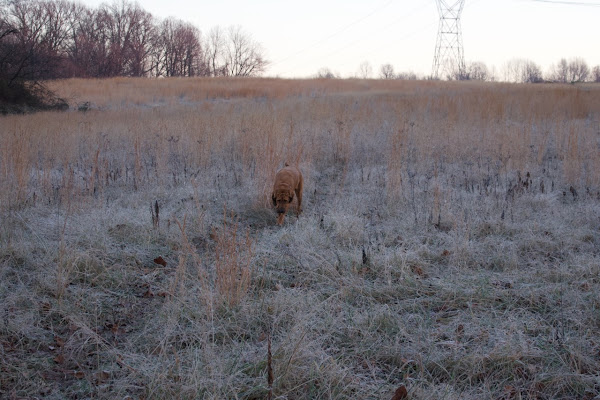 No photos to prove it since I doubt you would be interested, but let's just say that Stella made a few more stops along the walk than she usually does, to get all of those apples and bananas out of her system.  :) 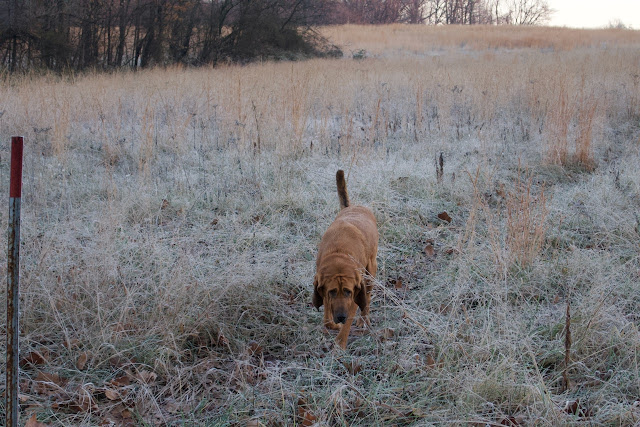 Can you tell which photos I edited? 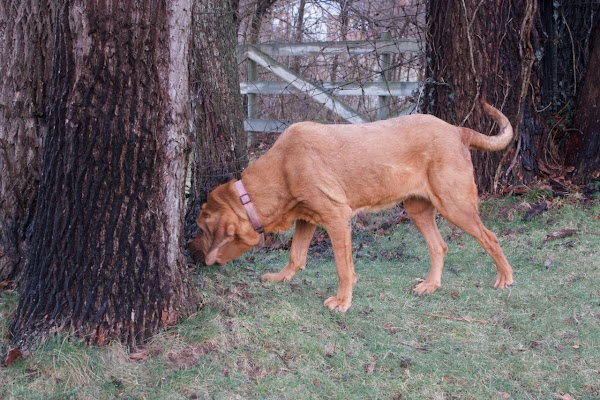 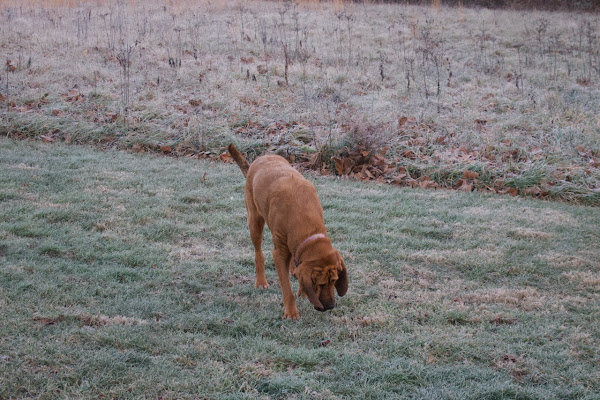 From the way Stella ended her walk, it looks like the field cat paid us a visit last night while we slept.

I won't discuss too much about the Apple Watch because I want to share all the pros and cons I have found after I have used it for a while, probably a couple of weeks from now. So far after only a few hours of using it and getting it set up so I know where the information is and how it operates ... I'll say it's been a very good purchase.

There are many things I like about it. I did my first ECG or EKG yesterday. It let me know that my heartbeat was normal, nothing to be alarmed about. Since I did not buy the cellular model, all the setting up and adding apps when needed is done from the iPhone.

With a sunny day ahead, it will be a good day to try the Canon G9 on the walk in the afternoon so I can get a better comparison. Today is NFL Playoff Saturday plus college basketball so I am not sure how much I'll get outside, still Stella will get her afternoon walk, as she always gets during the ballgames.

I dreamed about deadbolt locks last night. It was the last thing I thought about right before turning off the lights for the night. They were suggested to me last month when I wrote about Stella's escape. I transferred those posts to this blog on December 9th.

As funny as it might seem, I am beginning to think her escape was caused by her desire for food. Normally she would have been fed between 11am-12noon ... I didn't walk in the door until 12:53pm??? That was a hour or two late. I saw no signs that she tried to open the locked kitchen door to get out of the house.

The ONLY thing I saw she got into was the fruit she ate, from two different bowls in two different locations. She did not even touch her favorite chew toy, the hard plastic clothes basket. I had put that in the bathroom so she wouldn't chew it up in the bedroom, while I was gone. 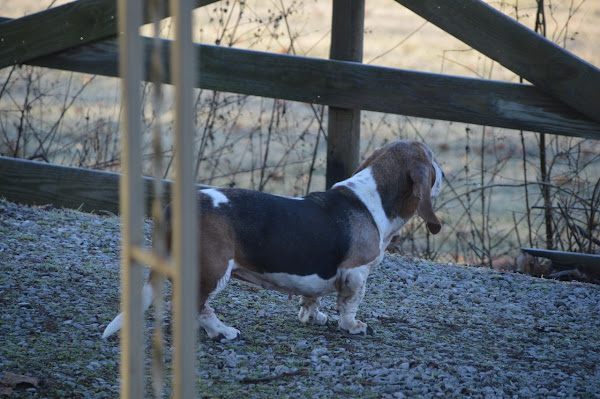 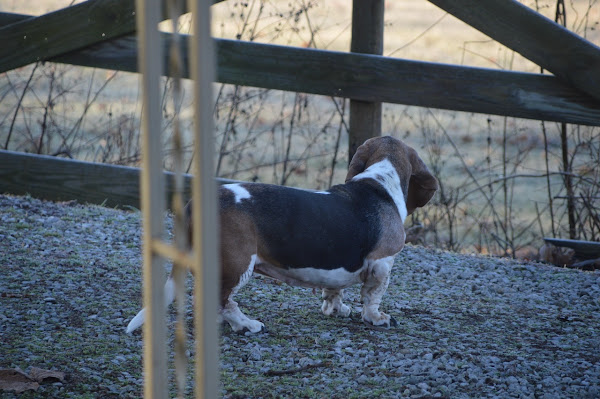 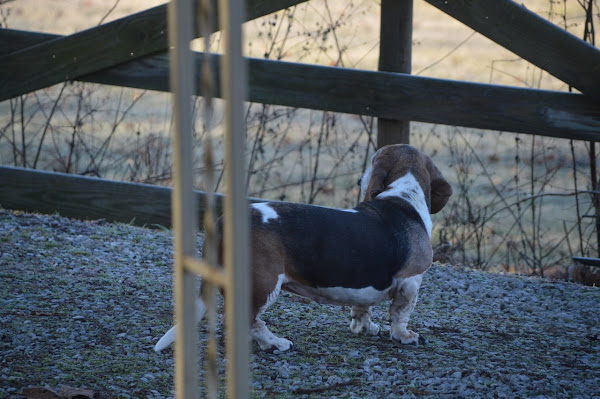 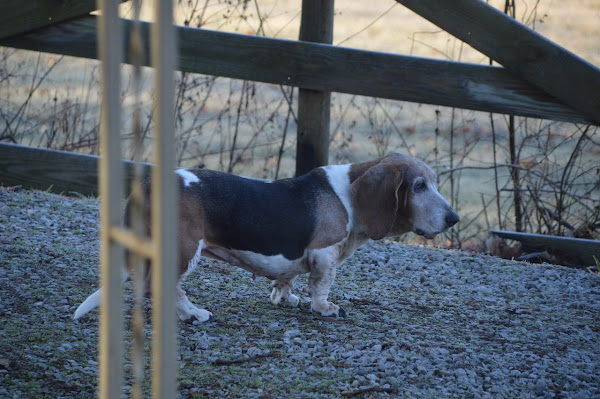 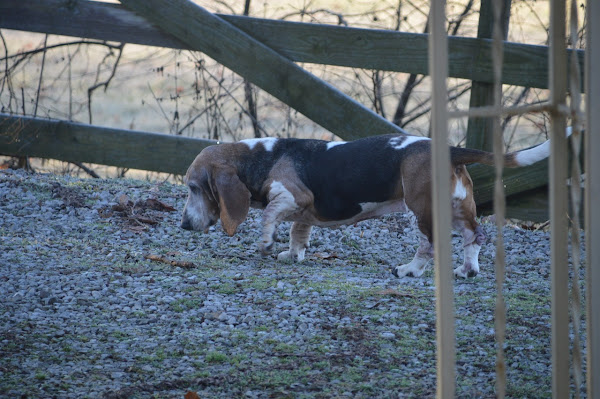