A Day Of Changes 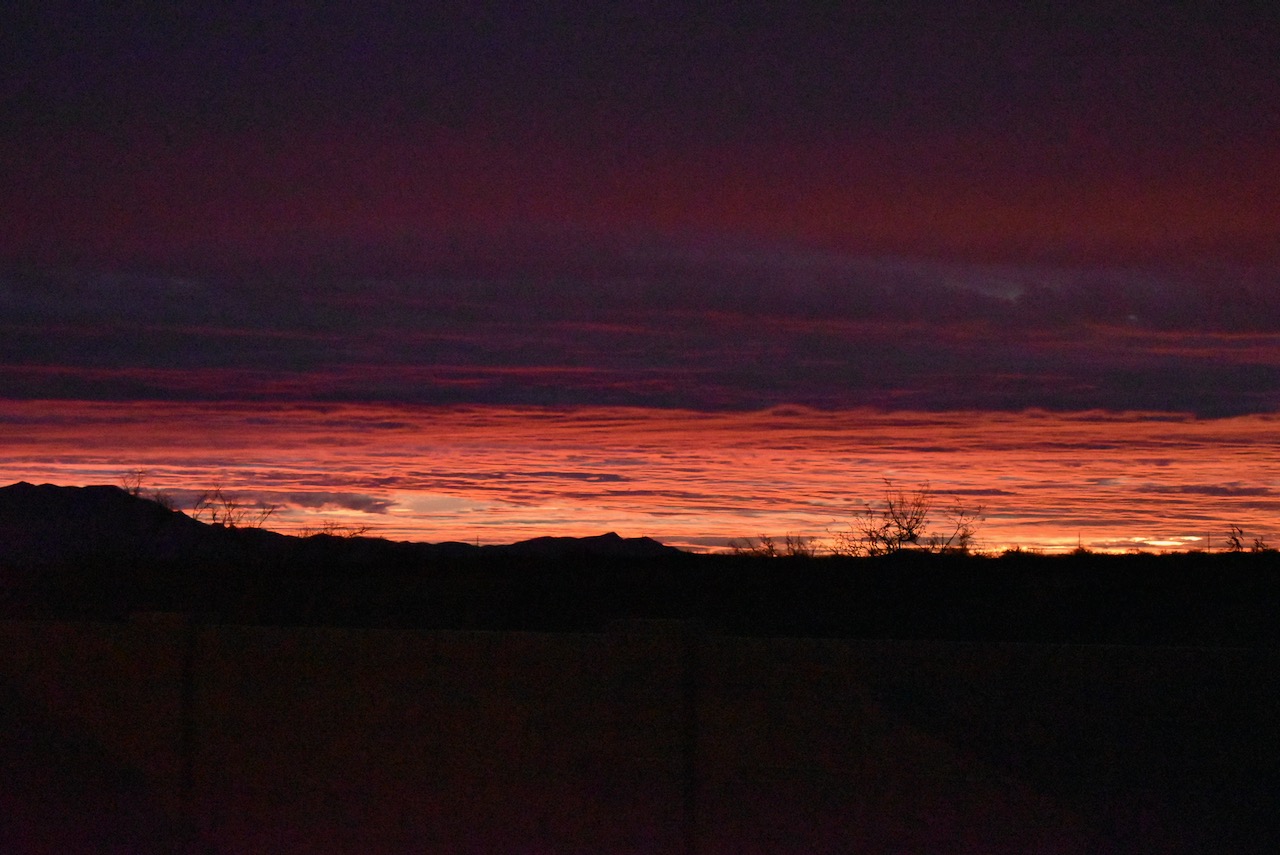 No fear, nothing drastic in the 'change dept' it's just that the weather has had some distinct changes as you can see here in the first two pictures. I was expecting rain early in the morning and got it. Enough rain not to go riding during the time of day I like to ride. So I turned my focus online to finding the black wheels for the FJ, the same brand and design that I had on my first FJ in 2014. I found them right under my nose at the TireRack, a company I had used years ago for one of my Mini Coopers. 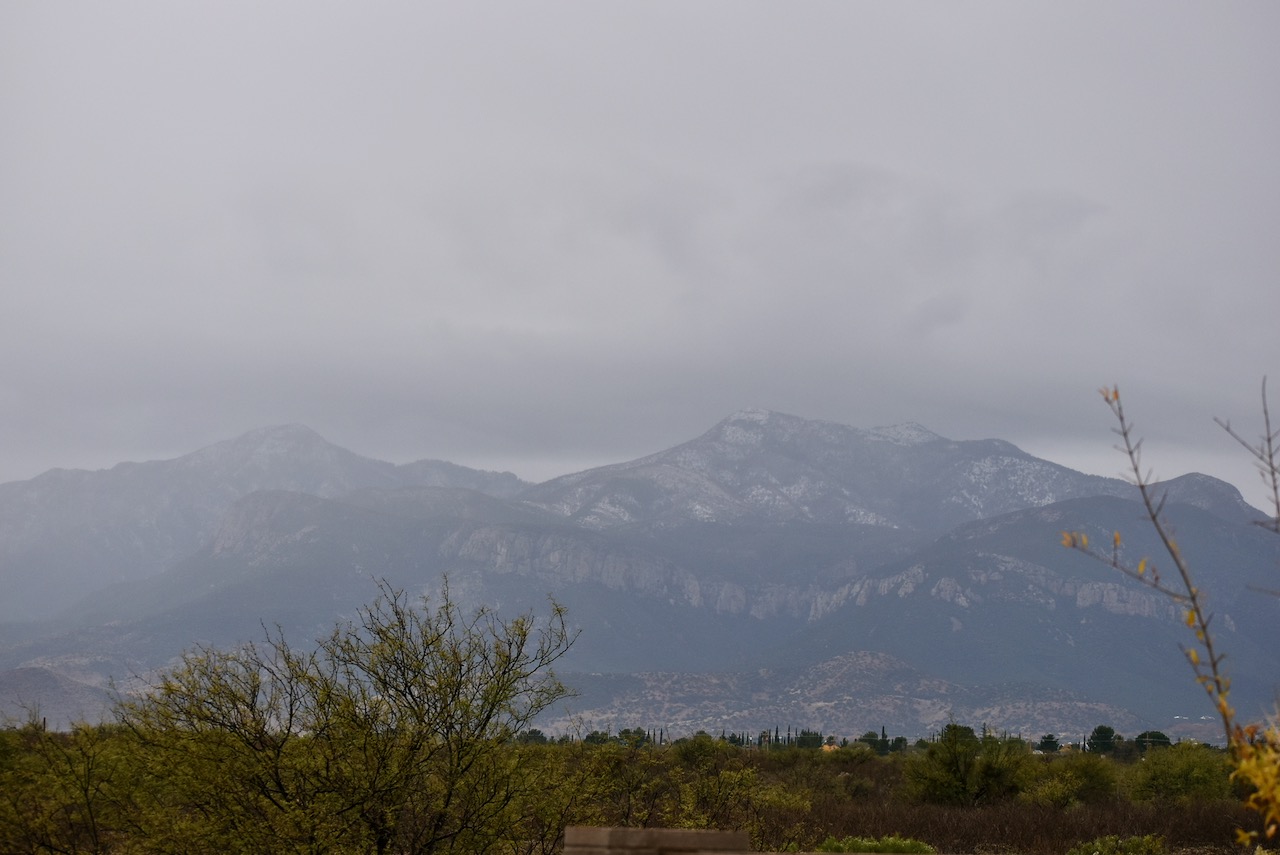 Within an hour after sunrise Stella and I put our walk into a 'rain delay' just like baseball. I didn't mind getting wet under the light rain but I didn't feel like toweling her off when I got back. With the natural oil in the coat of a hound, the water is never absorbed by the towel. So we waited and I went back to my searching online, comparing prices and where they were in stock. I was hoping I could make a trip to Tucson and get them today but that was not possible. They will be here with free shipping within 2-3 days. 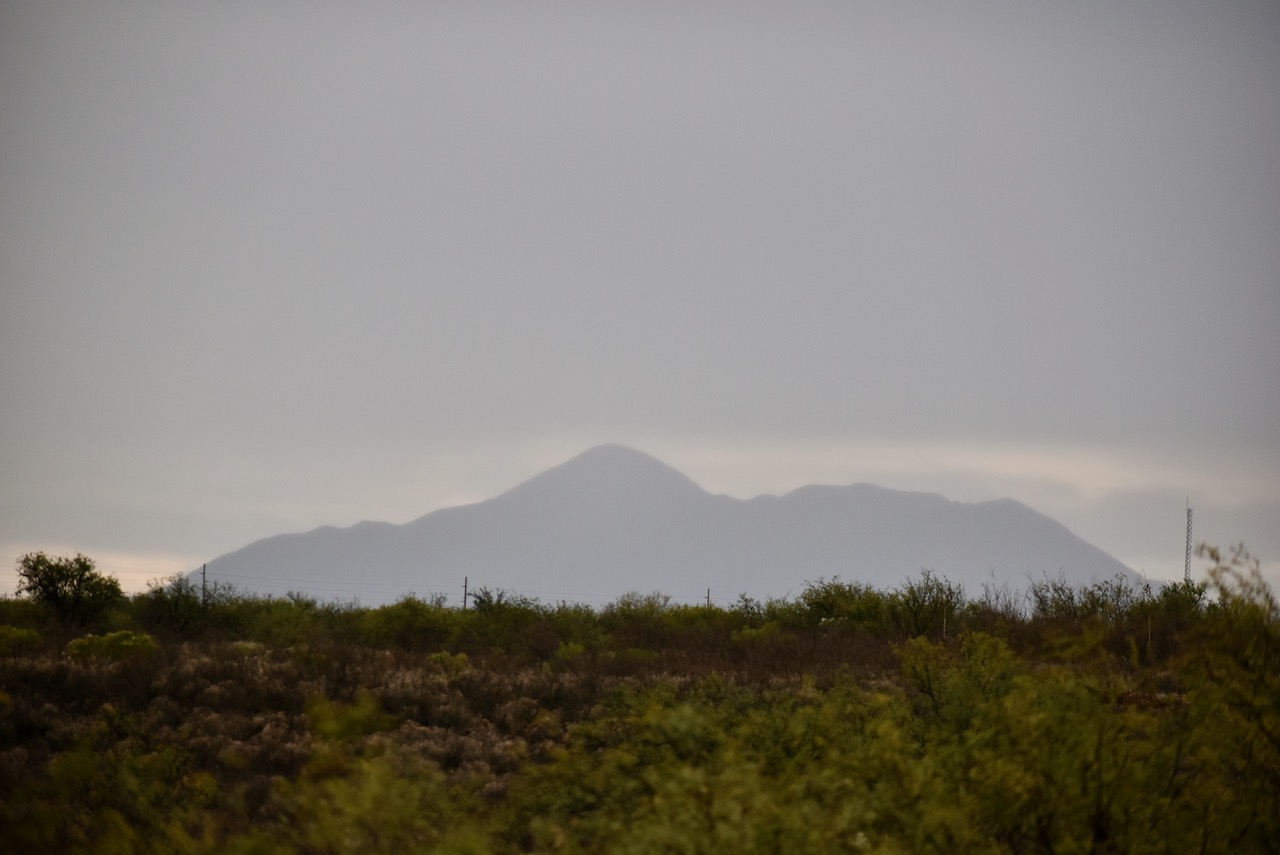 I like the Duluth Trading Company and their tv advertisements. I've never bought anything from them but after my first order I placed last Sunday I doubt that I will buy again. In fact by late tonight if I don't get some kind of update about shipping I may cancel the order. It wasn't a hard order. Another flannel shirt since I am finding out that might be the winter shirt around here. They had a short strap that attaches on a seat belt of a passenger seat, to Heidi's collar. It's a safety thing, keeping her from flying into the dashboard on our road trips if I ever had to slam on my brakes.

In this day and age of online sales and surveys in your inbox anytime you buy anything online or in person, I may be expecting too much ... such as an email telling me my order has shipped within two days of the weekend order. If not that, at least have my order show up on my online account when I log in to check status ... instead of NO RECORD OF ORDER. I have their order confirmation email with an order number. Seems simple, maybe not. Yes, I have called and talked to a real person the last two days, who told me it was shipping that afternoon. I lose my little patience with stuff like this.

Note:  It has come to my attention at 5:17 AZ time, from a blog reader that lives in Duluth MN, not only is the 21" of new snow a problem but many roads are closed or not passible. With all the snow and ice their major lift bridge is not working. So even if my order were ready to ship, highly unlikely it would get anywhere. As she said "the point" where Duluth Trading Company is located has been closed and just opened up for residential traffic. SO MY APOLOGIES FOR BAD MOUTHING DULUTH TRADING COMPANY. 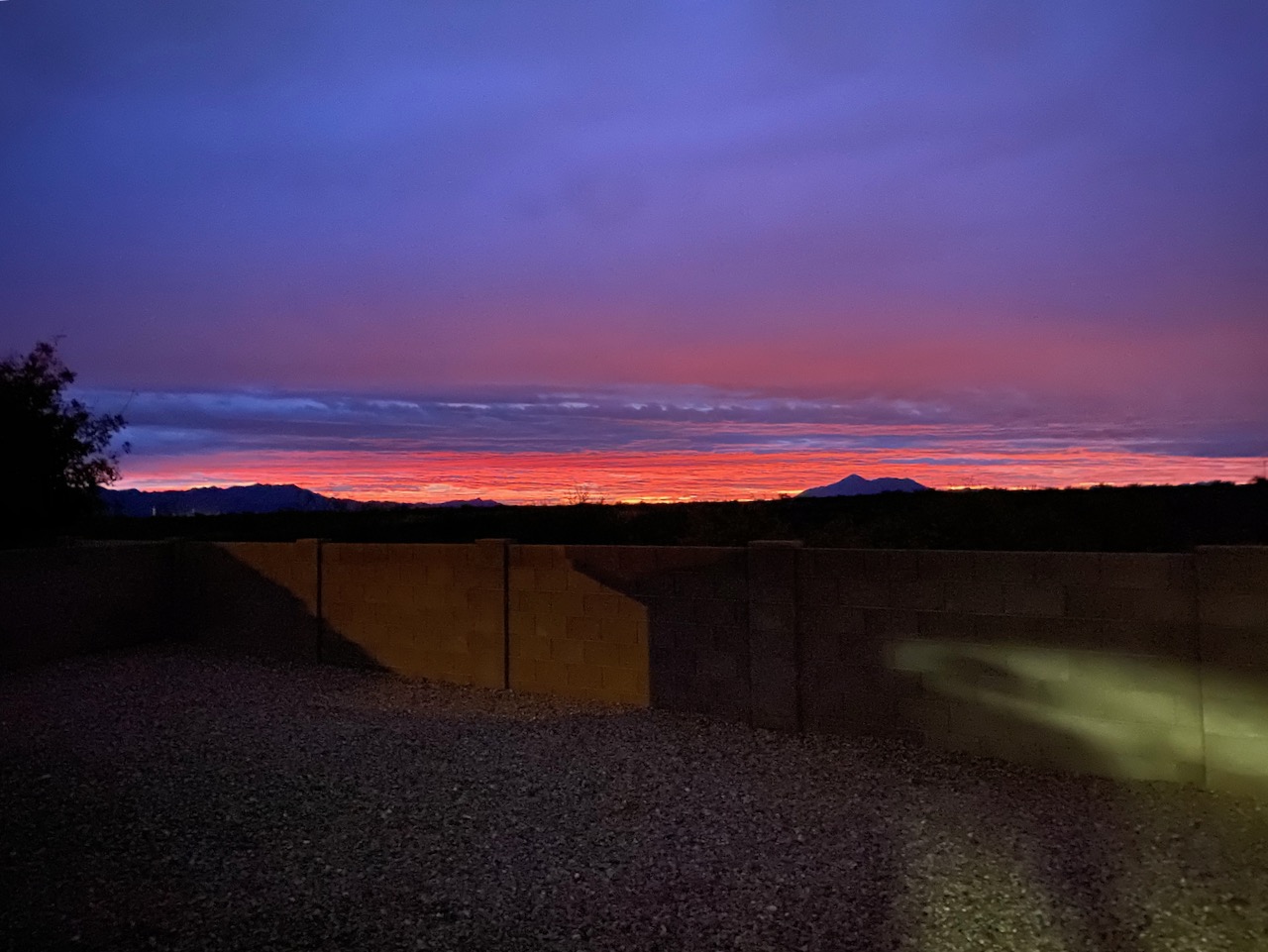 I should have turned off my kitchen light when I took this picture.

REI is another disappointing online order. You would think companies such as this would be on top of their game with so much competition for online sales other than Amazon. I ordered three things November 23rd ... they shipped them in three different shipments and based on tracking information they all came from the same warehouse in Kent Washington. The problem is on order#2 they decided to send it cross country to Richmond VA first, then figured out that Arizona is in the opposite direction. I am suppose to get it today in the mail. Let see ... Amazon delivers in 1-2 days after the order is placed or REI for 12 days after the order?????

I keep reminding myself that nobody's perfect but really ... it's not that hard to ship something correctly and on time. I DO KNOW I will not buy anything else from REI or The Duluth Trading Company online ... I'll go back to Amazon. 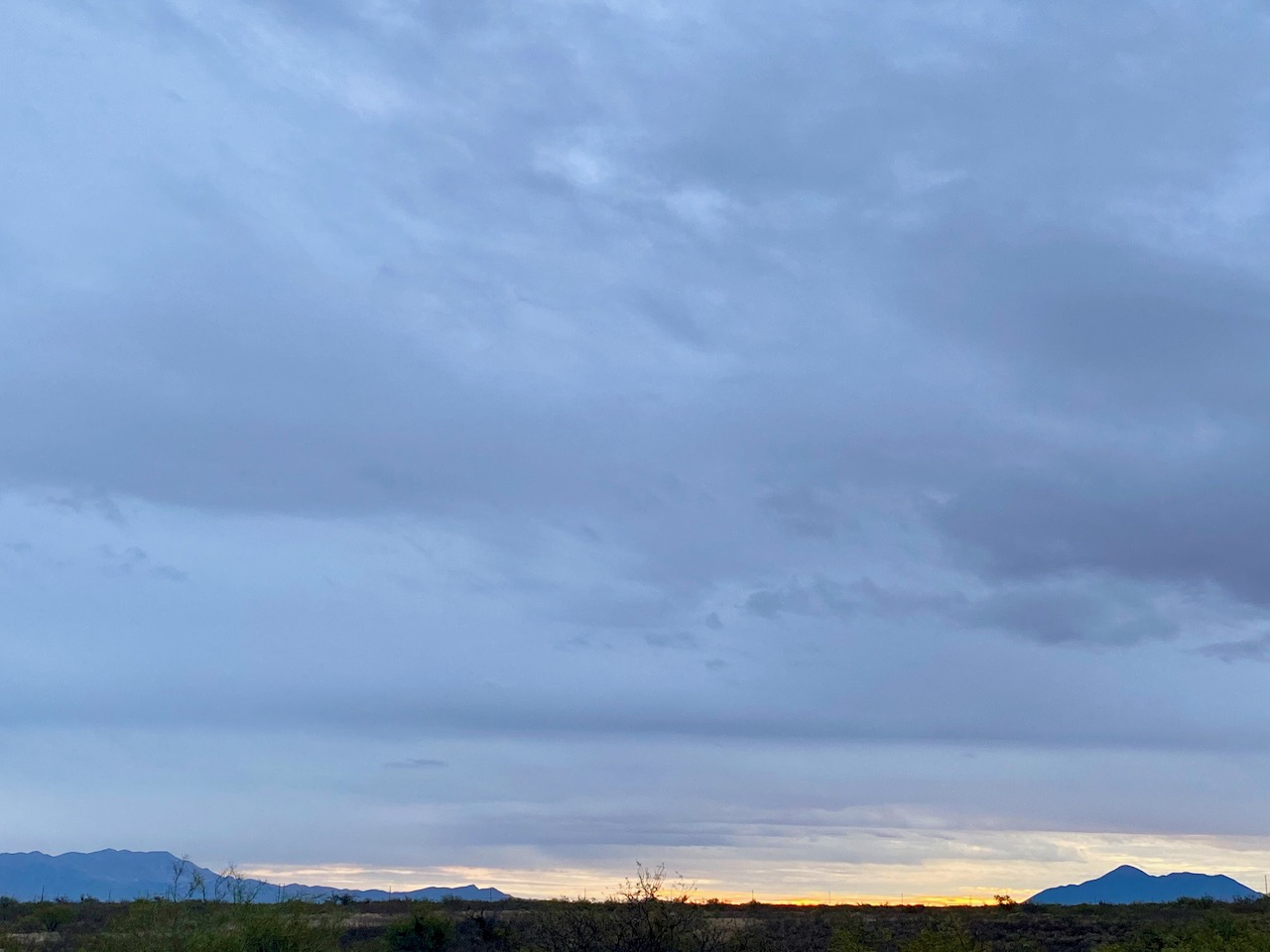 Later in the morning it was time for a walk. My lower back needed some exercise from that huge error in judgement I had Monday afternoon. You remember how I was going to lay on my back under the side of my FJ to lift a very heavy rock rail with brackets, up into the area to bolt it to the frame of the car. I didn't succeed but Toyota did yesterday. In the meantime all that twisting, turning and lifting irritated my lower back on the new hip side. Sore enough, stiff enough that I wasn't going to get on a bicycle today. Stella trotted a lot during her walk. Heidi stayed behind to finish her late morning nap. 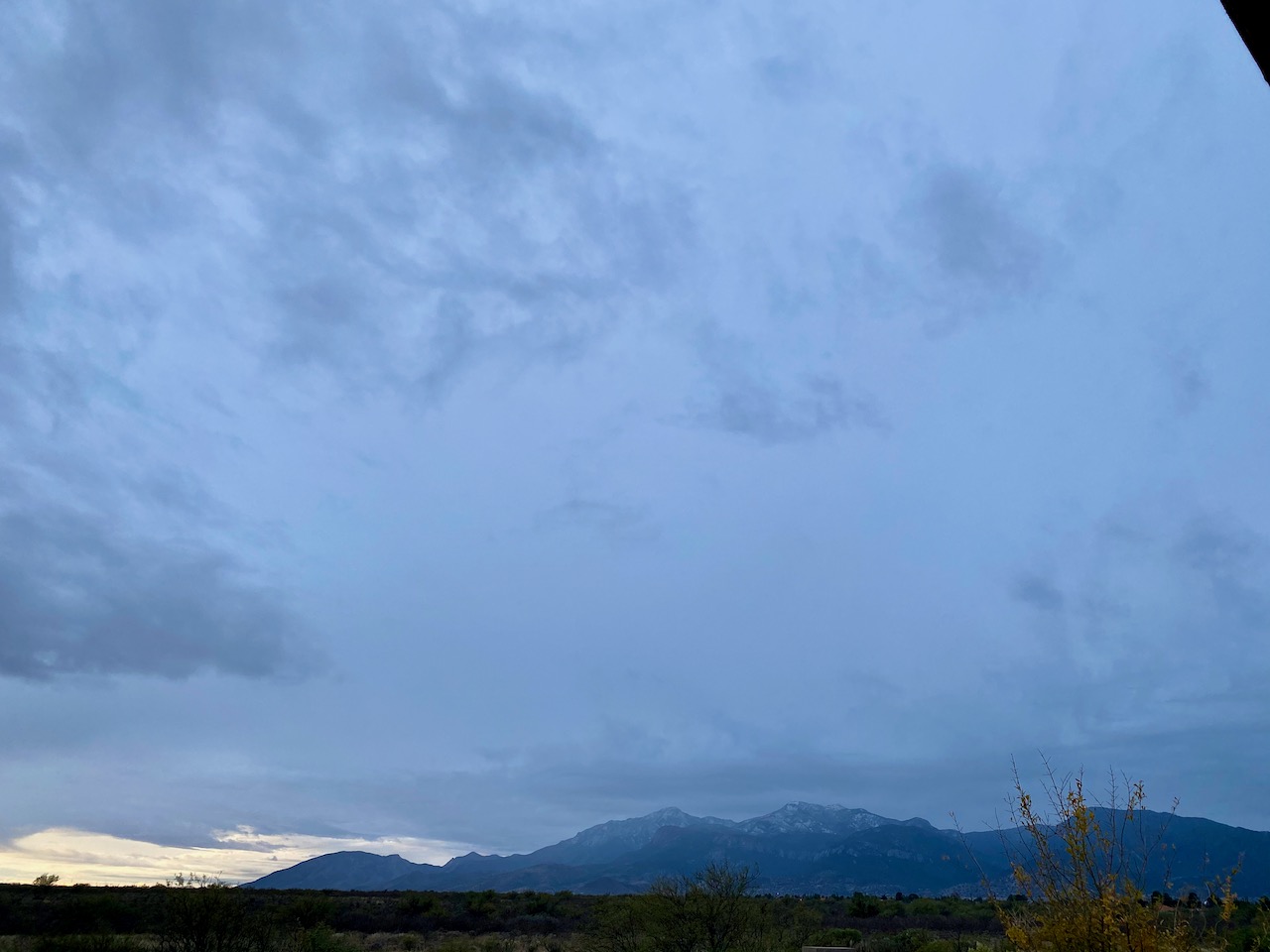 I had a feeling that as the weather turned to sunshine that the winds would pick up. They did, making that 67° feel a little cooler than it was. Am I not adapting to the SE Arizona winter like I thought I would, turning into a whimp instead so soon after moving? I never thought temps below 70° would give me so much problem. I'm already looking forward to springtime and a hot summer.  Ha Ha 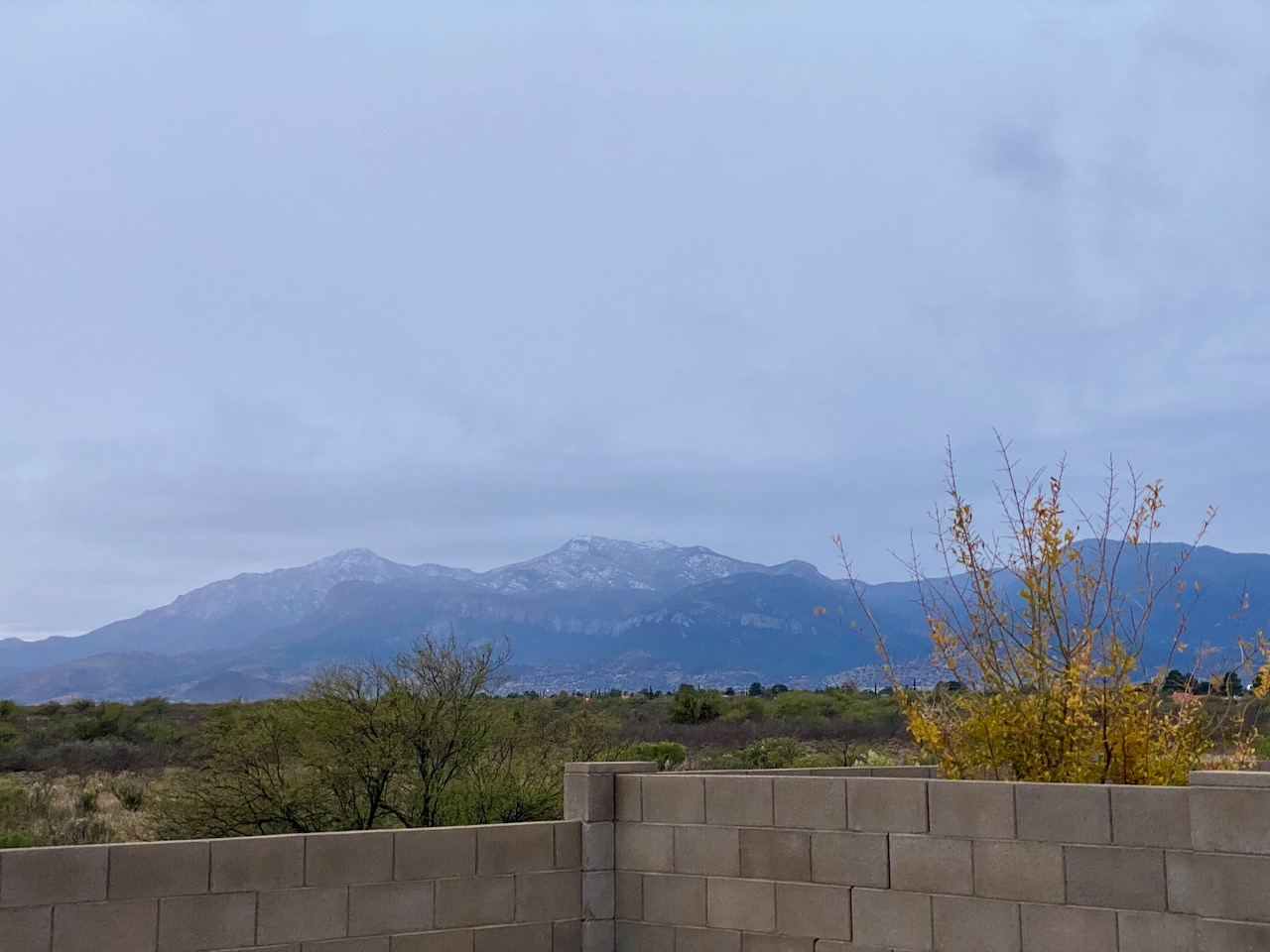 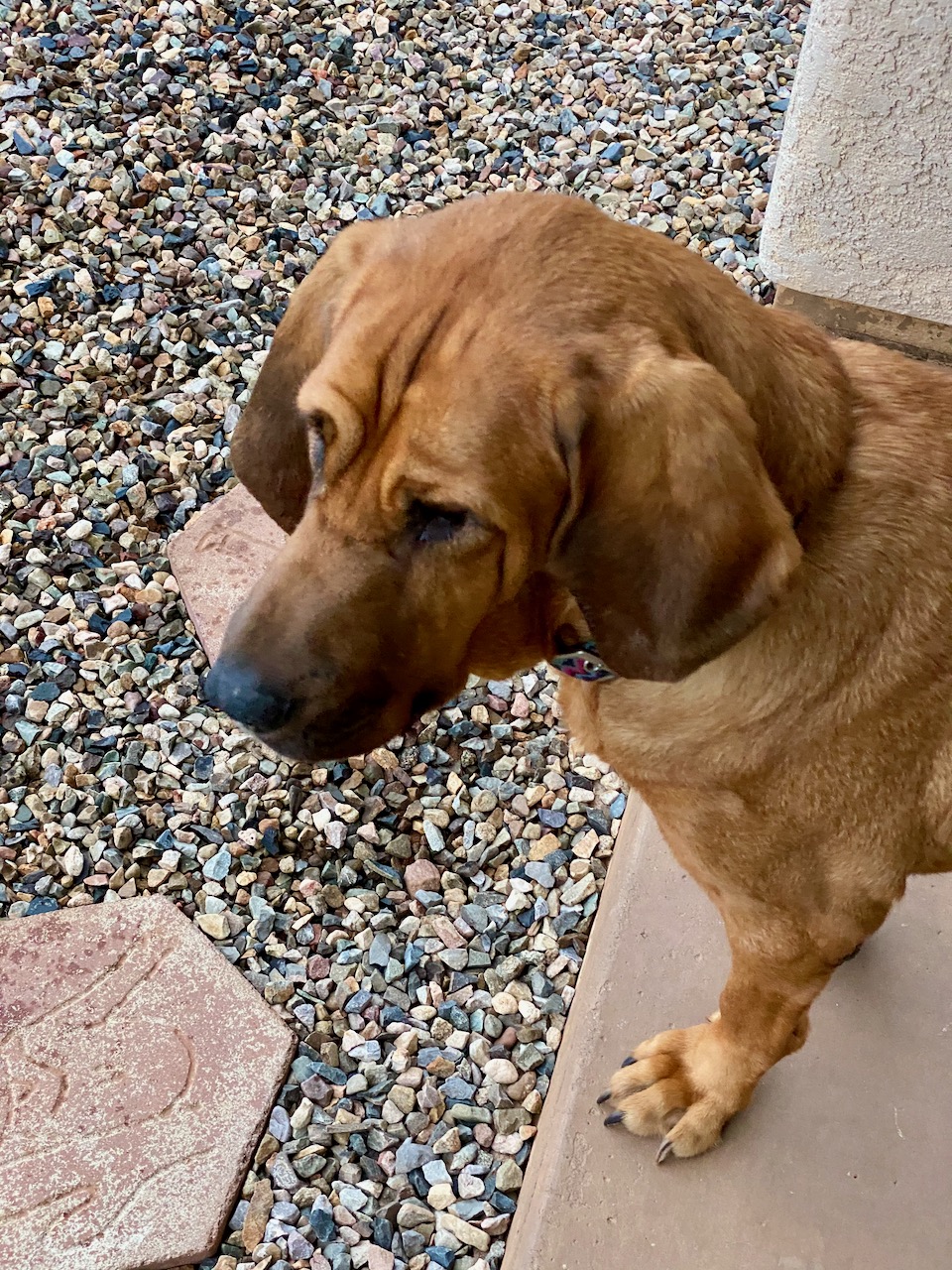 Stella and I rarely hear the puppy next door anymore. They surely didn't get rid of it already. I haven't seen them walking it on the sidewalk in front of the house, so it's hard to say. Stella will stand and listen for the puppy barking or crying every morning soon after 8am. 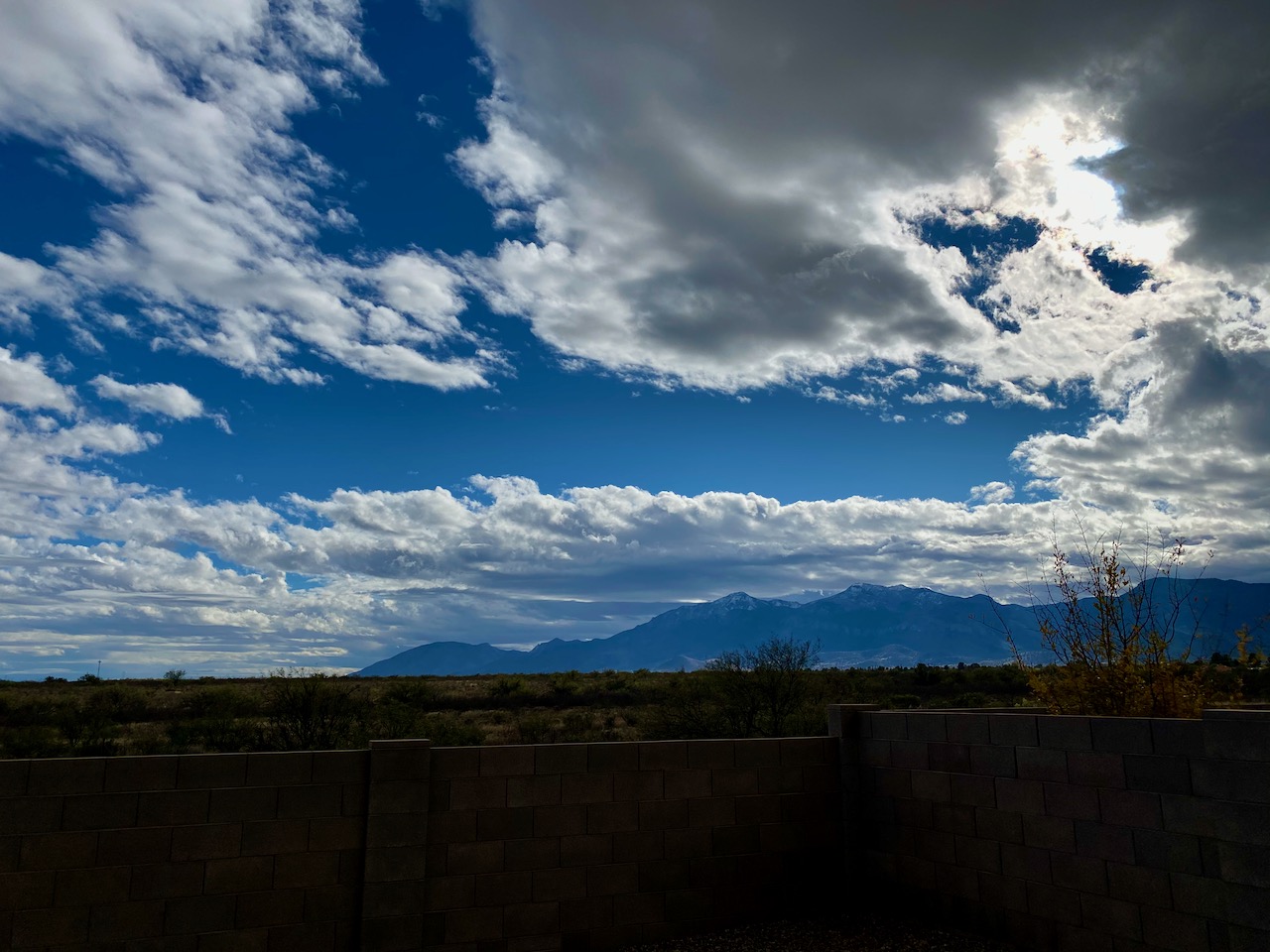 Another change I was feeling today was my lack of motivation. Granted I got up early (5am) but that is not a rare thing for me. Normally on a day that I don't feel like riding a bicycle, I feel like taking a hike somewhere or driving around the local area with my camera ... but not today. Those urges were nowhere to be found. 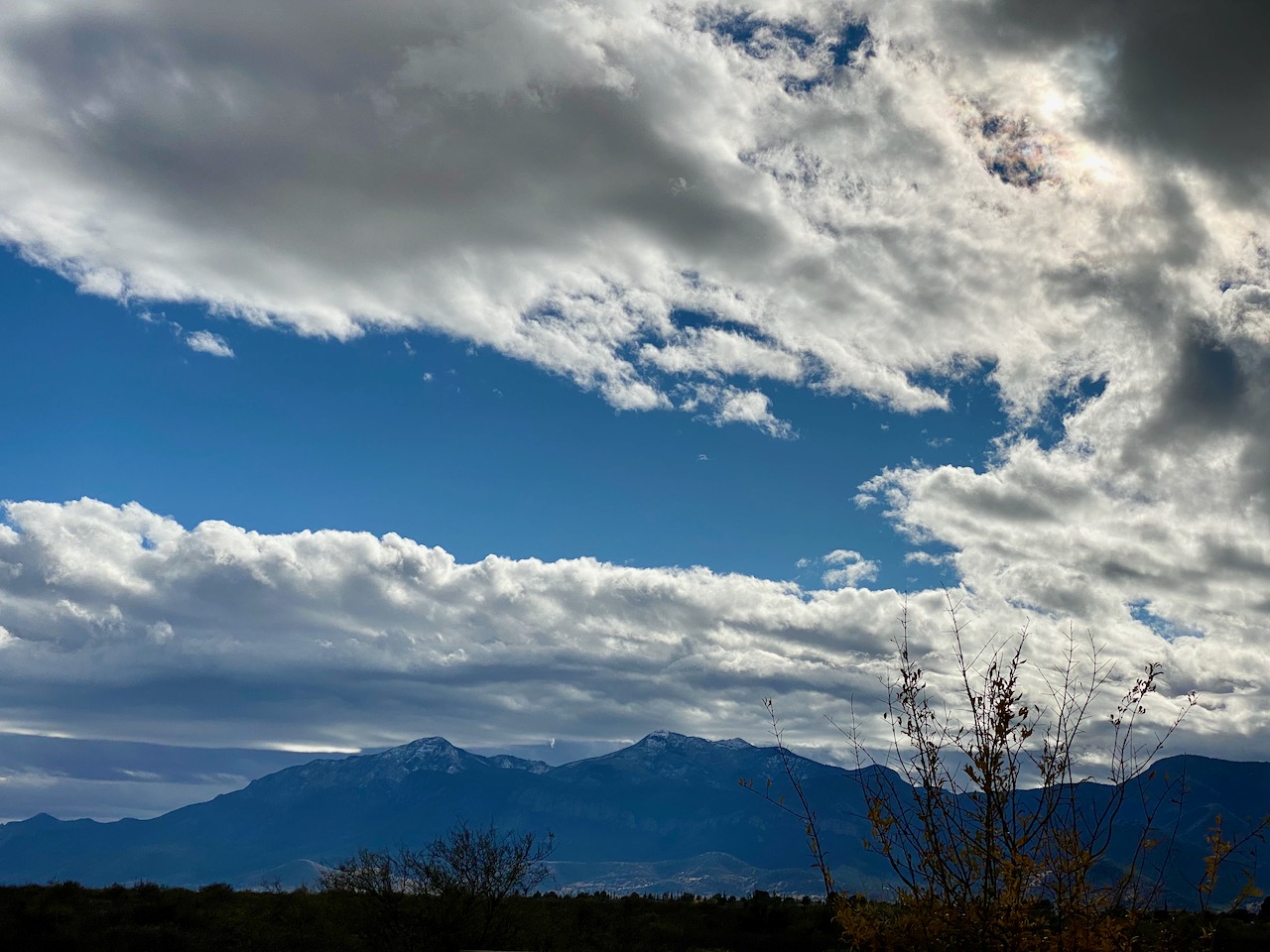 So while Stella slept on the patio and Heidi was on the bedroom floor in the sunshine, I sat on the patio facing the sunshine and feeling the cool air whip by my face. The sun was so hot on my face but the cool wind kept me in my sweatshirt. It didn't take 30 minutes before those winds blew in the gray rain clouds to mix with what you see here. No rain is on the hourly forecast for today. 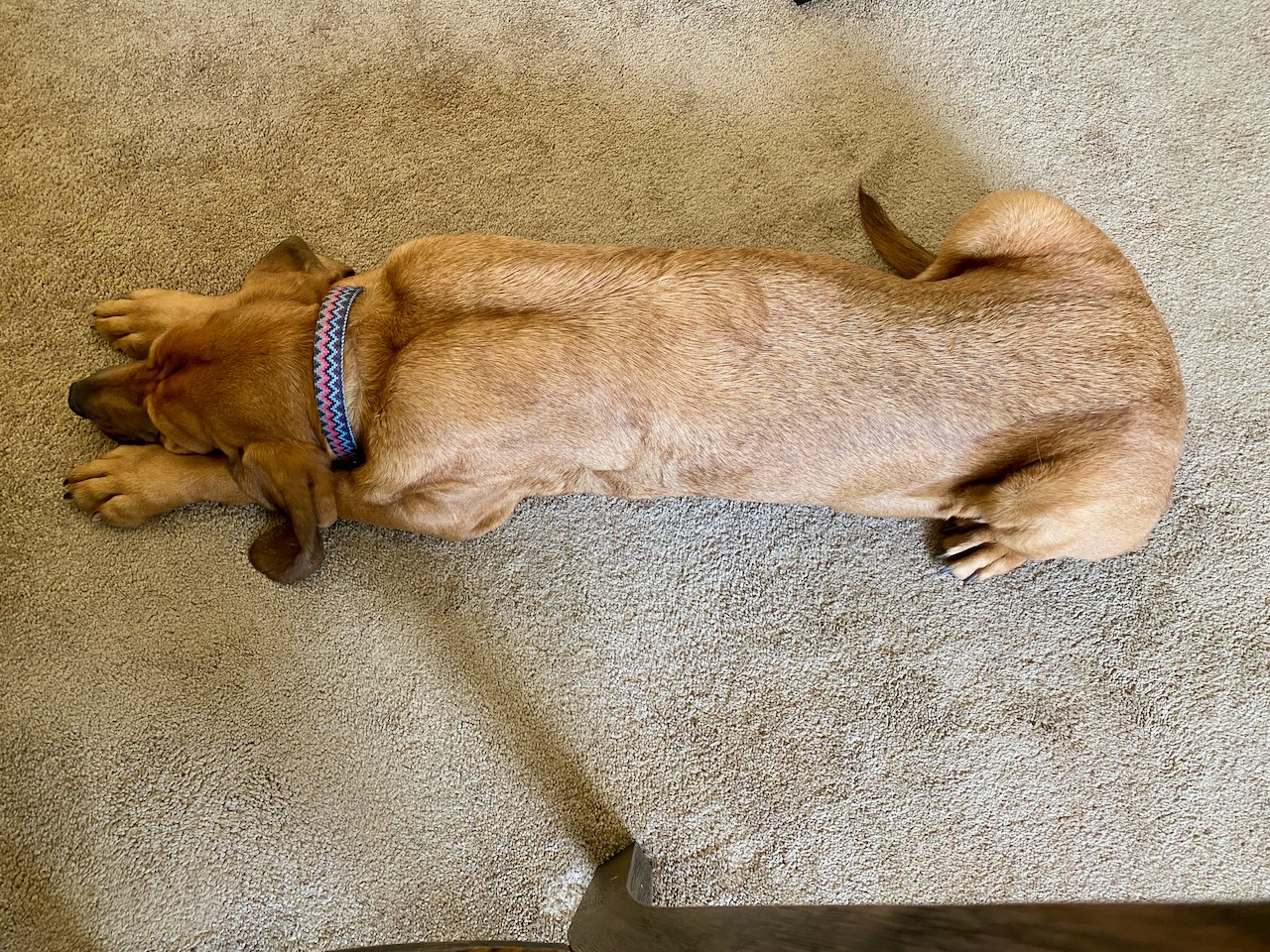 I guess Stella was feeling the same way I was today.

Since I didn't have a lot of pictures for today's post I decided to pull some from the library like I have done before. All of these next pictures were taken on the 4th of December in different years.

I think I have come to the phase where I have to have an exercise program on a regular bases that consist of stretch and some basic exercises. The doctor on Tuesday did not mention doing anything like that but I know when I feel I should. He did say I would not see a lot of improvement from here on out based on what I told him. Past patients have told him it takes around 8 months before they were feeling normal. I mentioned the small aches and pains I sometimes have and he said that is normal and part of the process then once again reminded me that I also have a femur that was broken before the hip replacement.

He did say I can do everything from here on out, except those activities like running, skiing, snowboarding, basketball games, racquetball, tennis etc. He did not verbally tell me those activities but they are listed in the book they gave me the day before surgery at the hospital. So stretching, some pushups and some resistant band training should be okay.

It's one of those days where the words don't flow easy. I sit in the chair grasping at something to write and at this point in the blog I cannot think of anything else to write about. I guess it's like I said on Facebook this afternoon with that picture of Stella stretched out sleeping next to my chair "Sometimes it's just good to take a day off during the middle of the week" ... I guess that is what I have done mentally today.

It's sunny, with dark gray clouds mixed in and gusty winds just like you would imagine in the 'Wild West.
at December 04, 2019