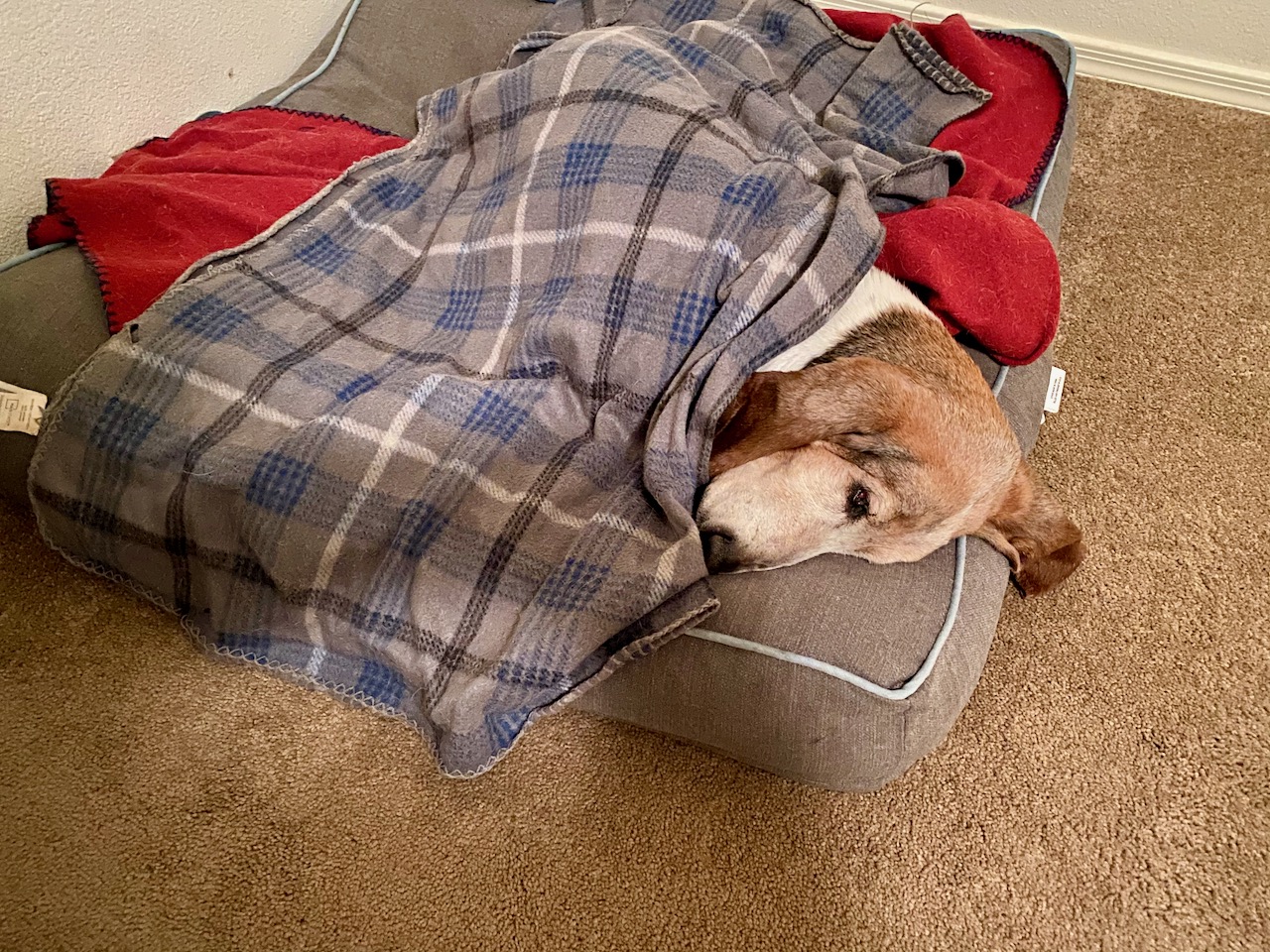 It had been days since Heidi had any photos on the blog. She really is camera shy or is just stubborn enough that she doesn't want to be bothered having her picture taken. So the other day I decided I would go to her and take whatever pictures I could get. These show her typical day as I took two days worth. I just missed getting pictures of her sleeping outside in the sunshine because every time she would wake up by the time I came back with a camera. She loves the bed I bought a couple of months ago and will spend most mornings in the bedroom lined up with the sunshine while she sleeps on the floor. 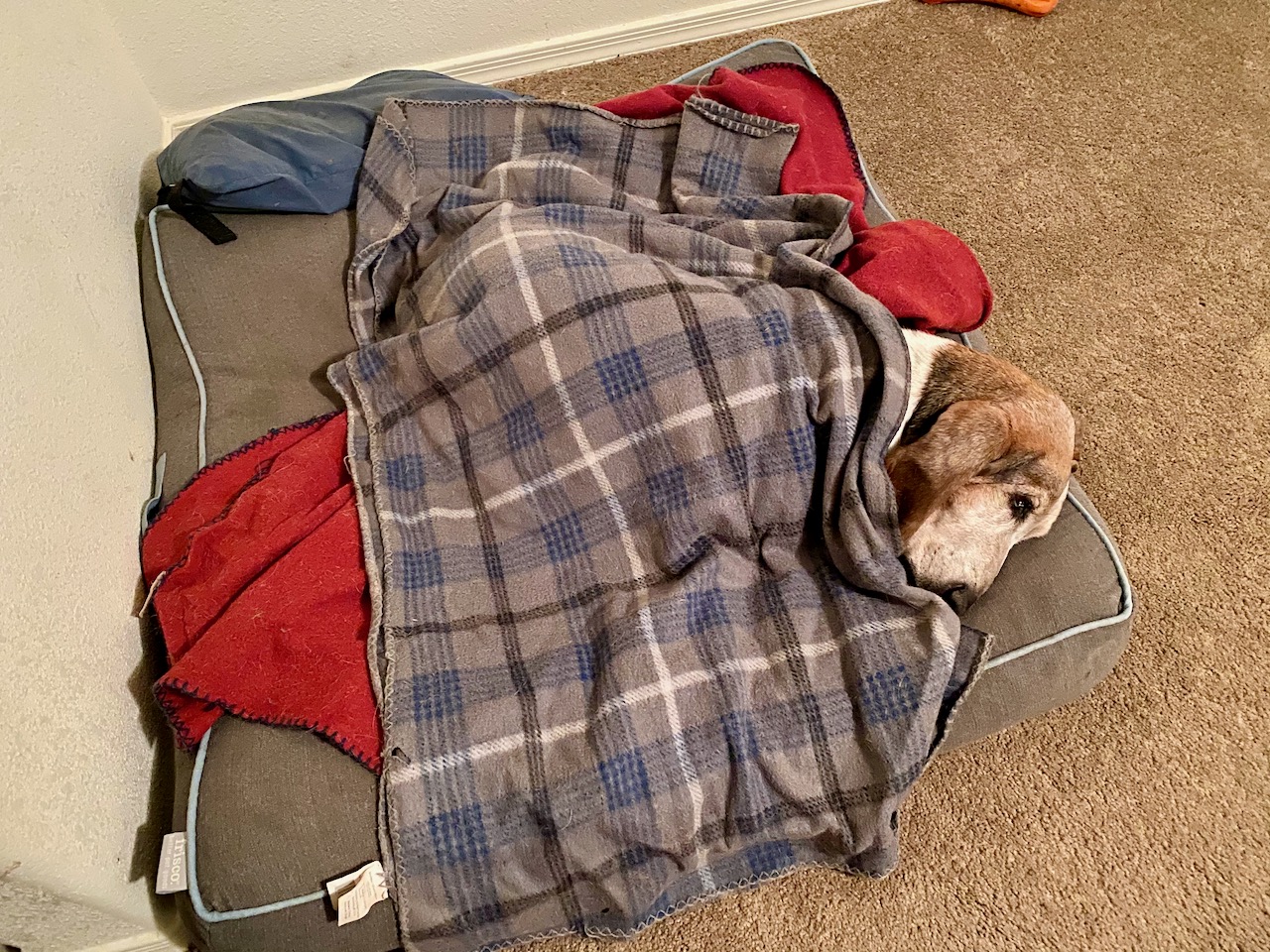 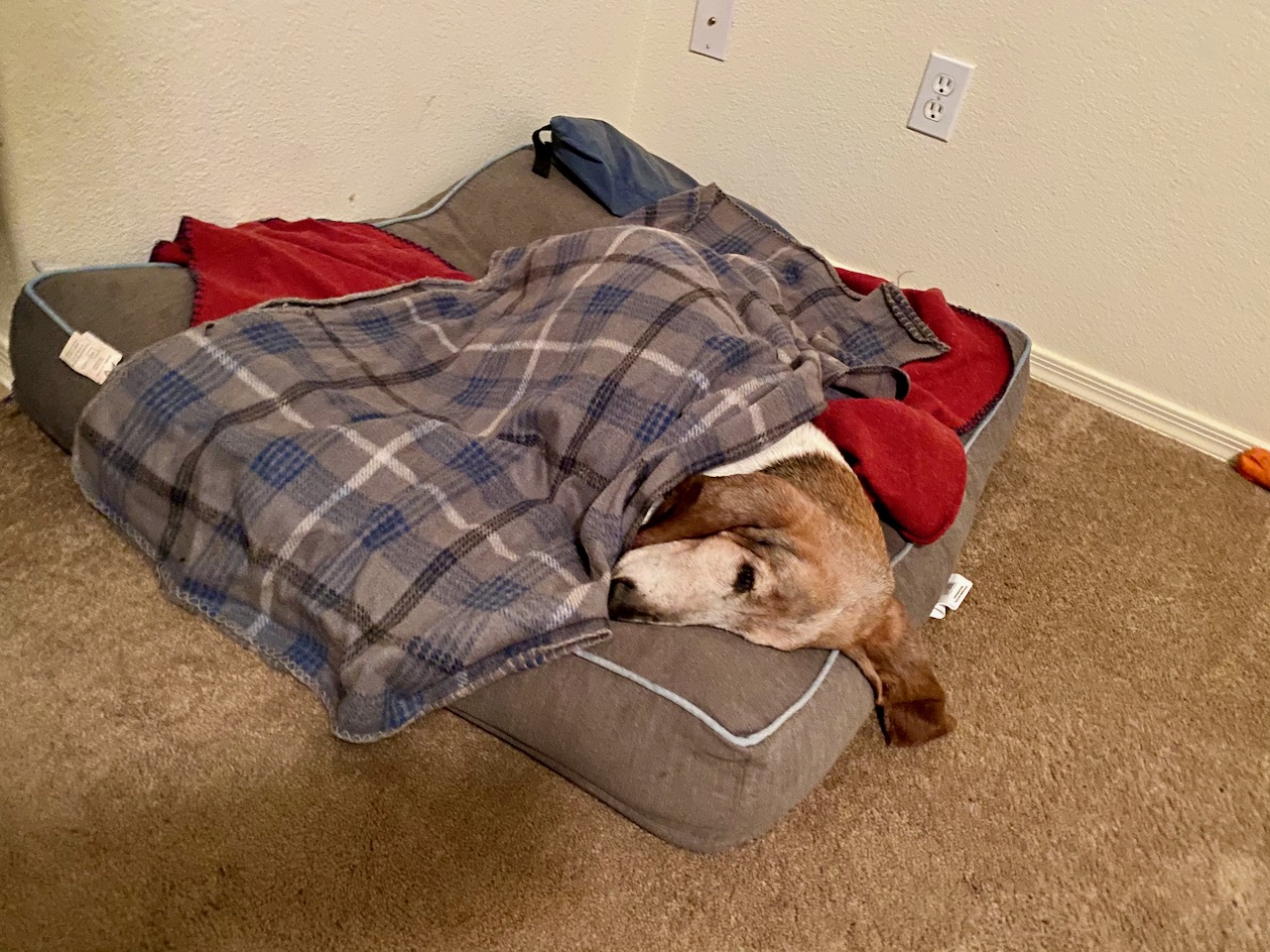 You can tell it's cold at night, not that I leave the windows open during the 30's and 40's but she knows what time of year it is ... it's again a two blanket winter. 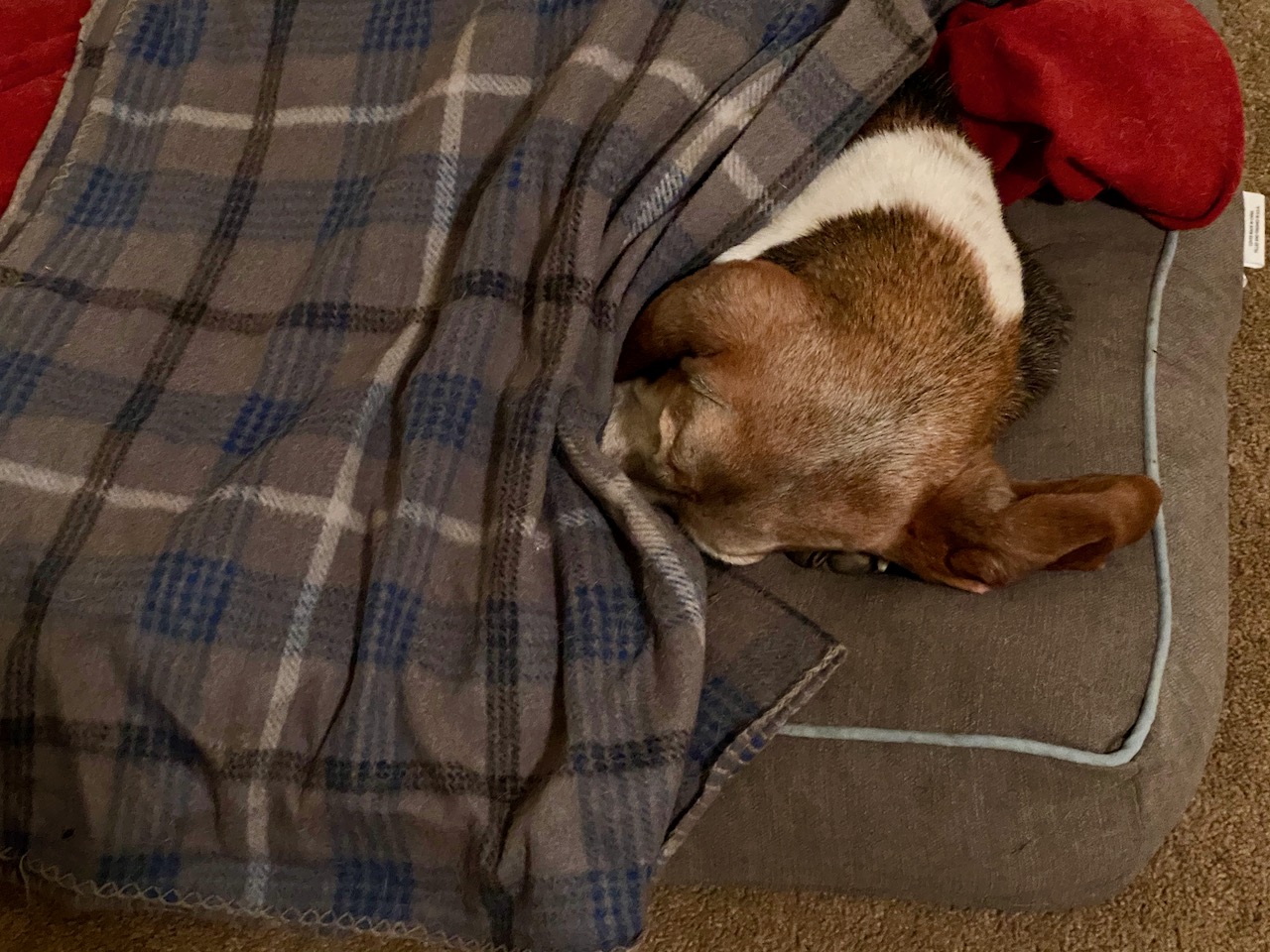 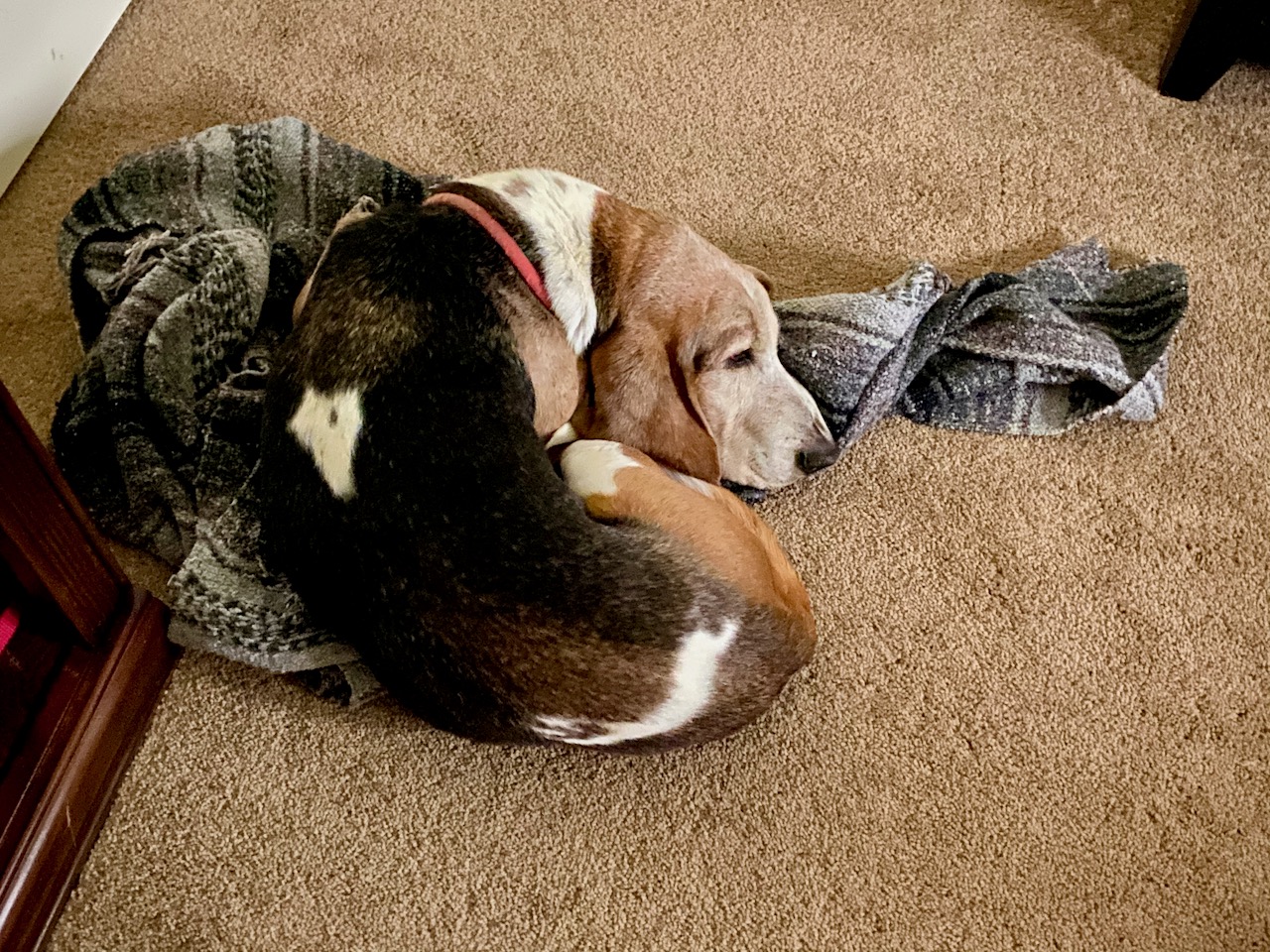 I put one of her favorite blankets folded in the corner of the computer room but that wasn't what she needed. She pawed and scratched the blanket from the corner of the room out by the book case, out of the way but directly behind my desk chair. She folded it exactly like she wanted it. 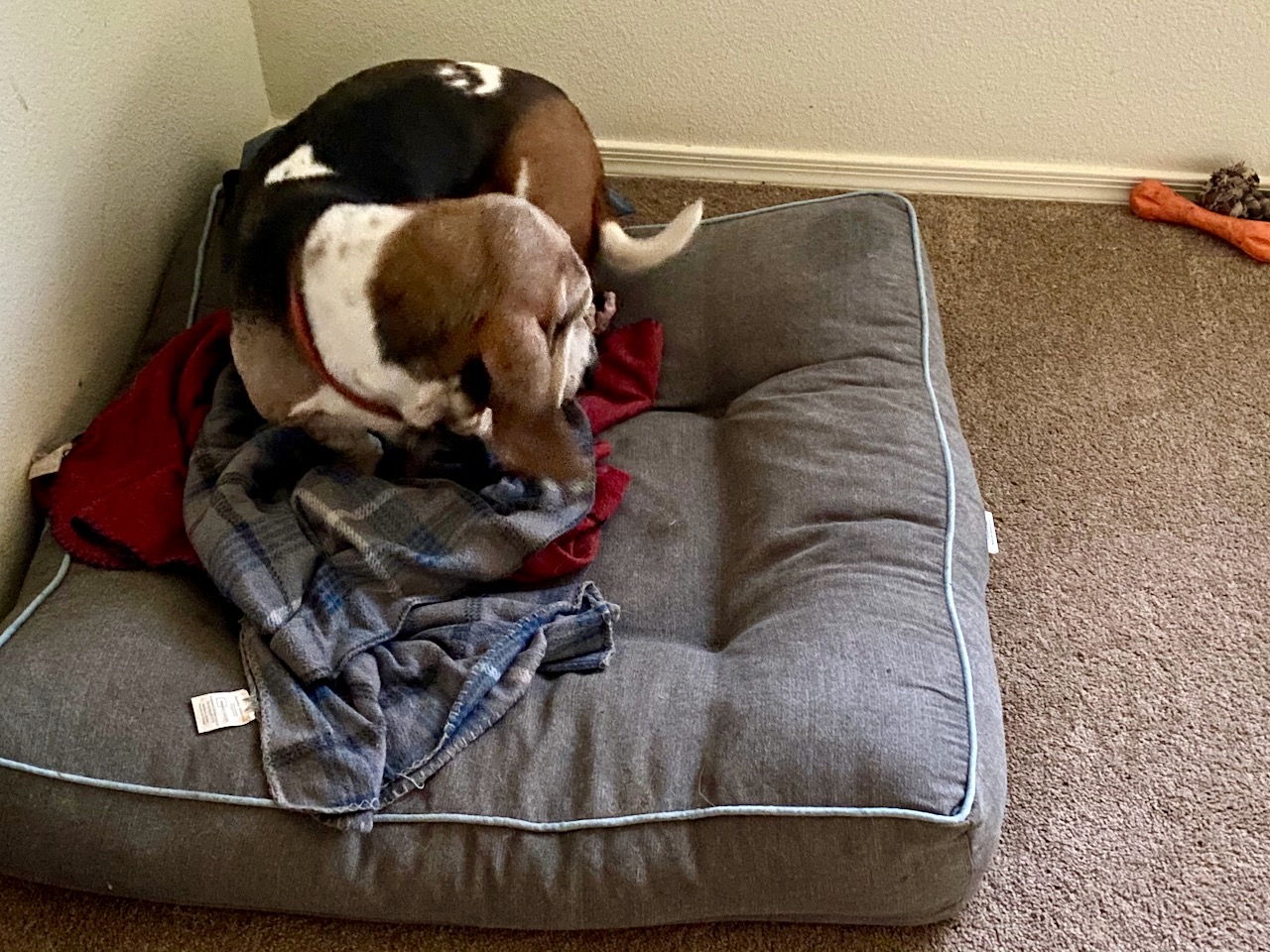 Any breed of dog will walk in circles to mash the grass down before they lay down ... this is her sequence to get the blankets in the perfect spot. She does this many times throughout the day. 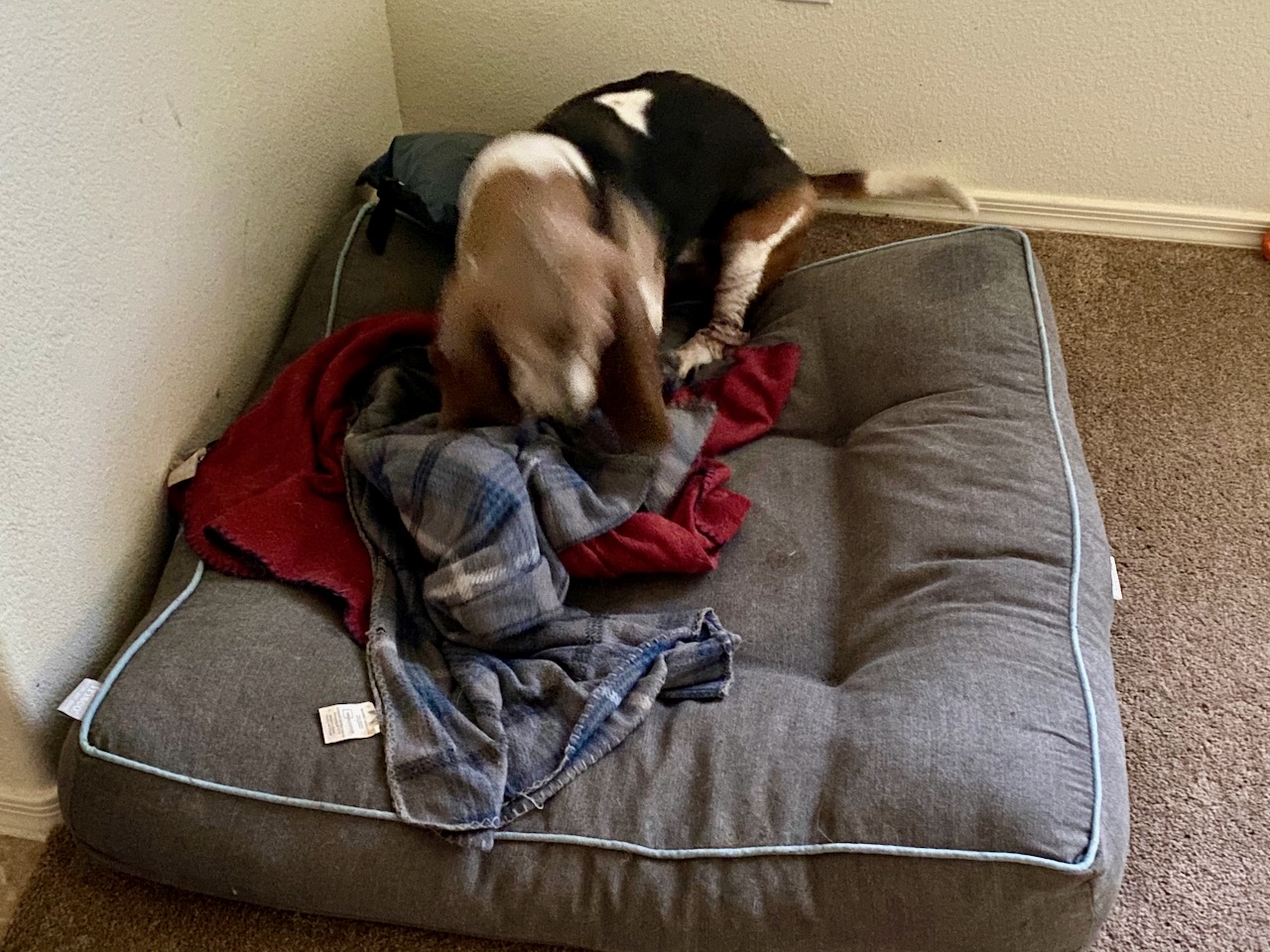 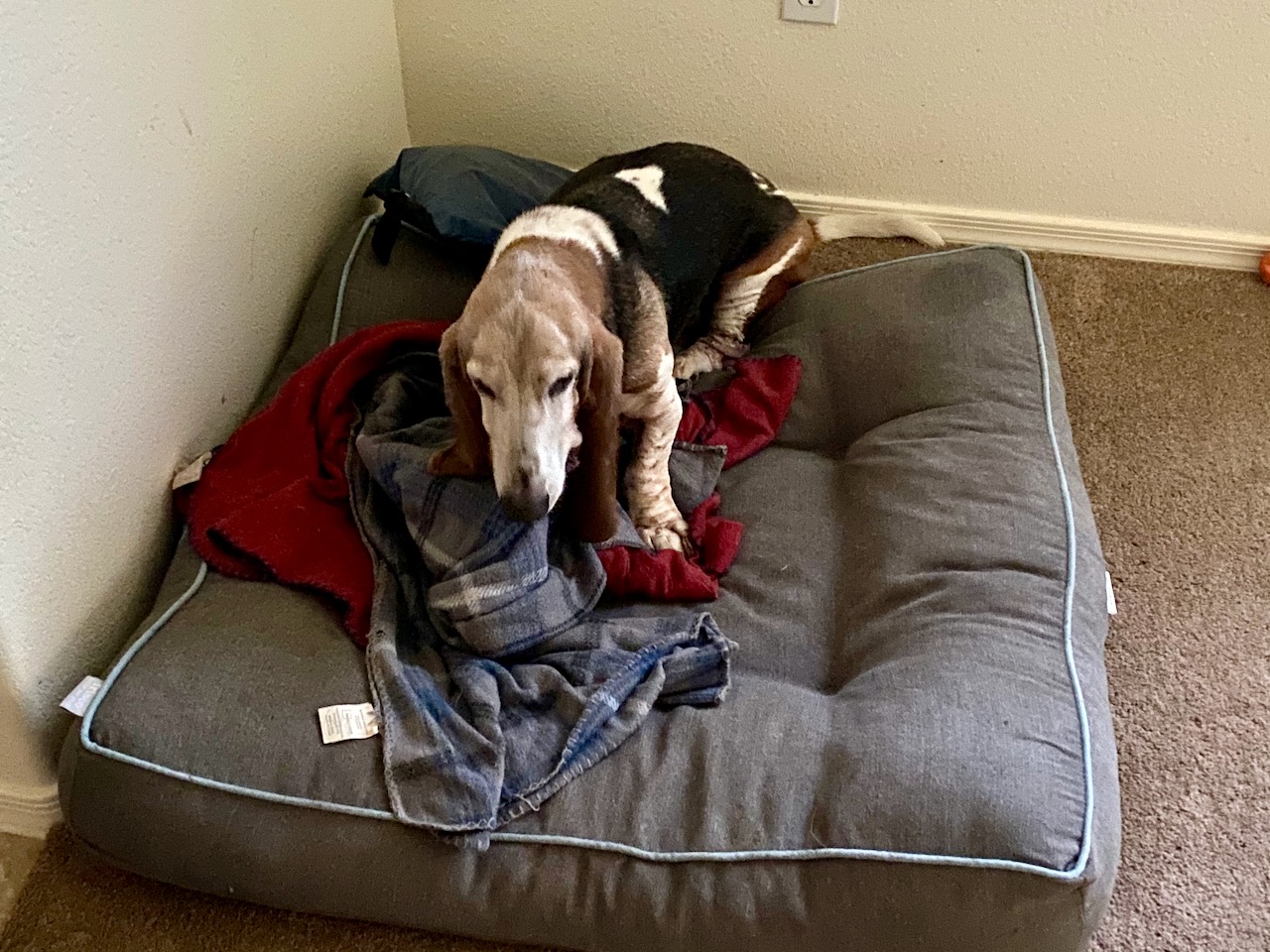 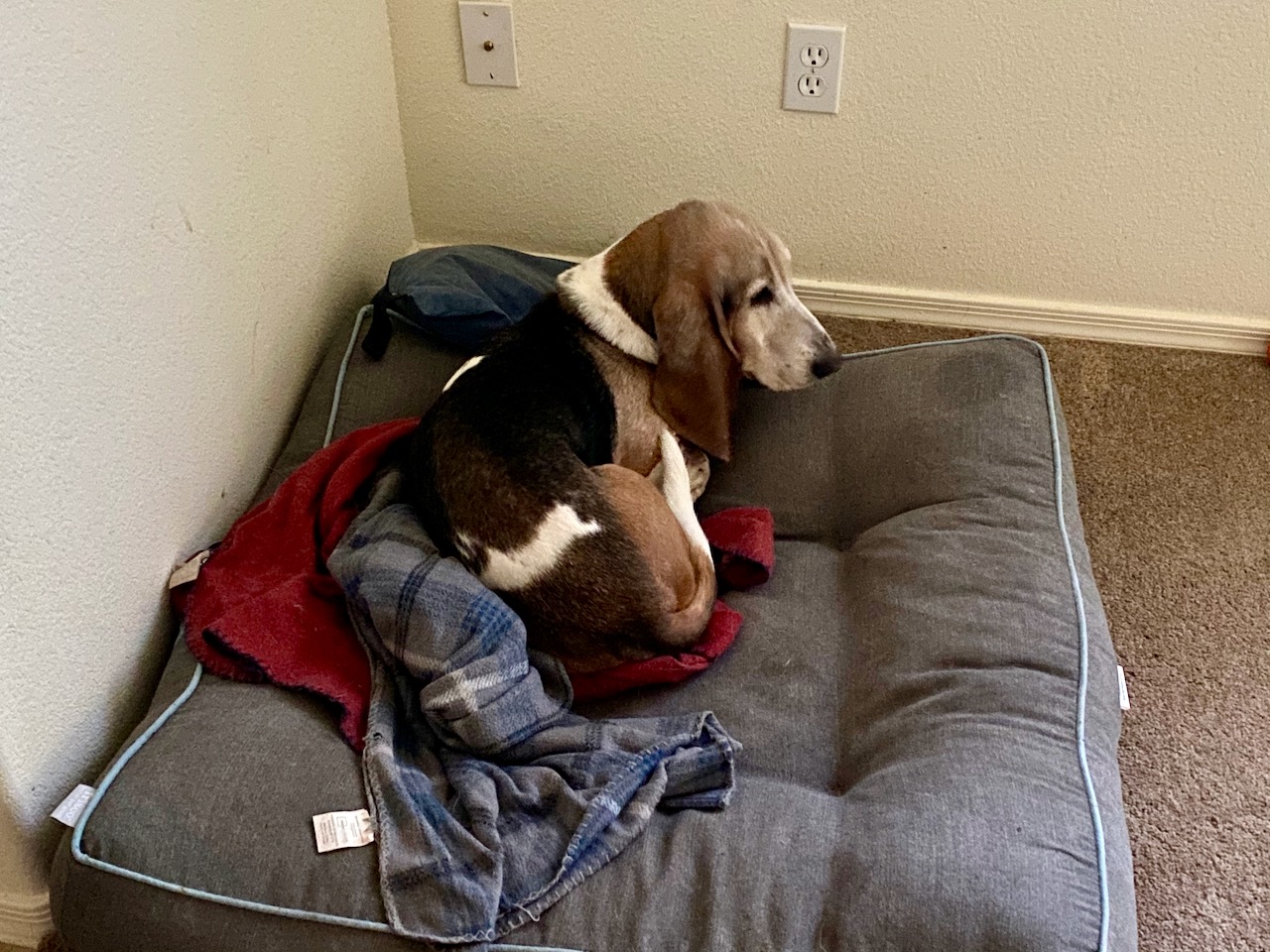 She doesn't stay in one place too long either. 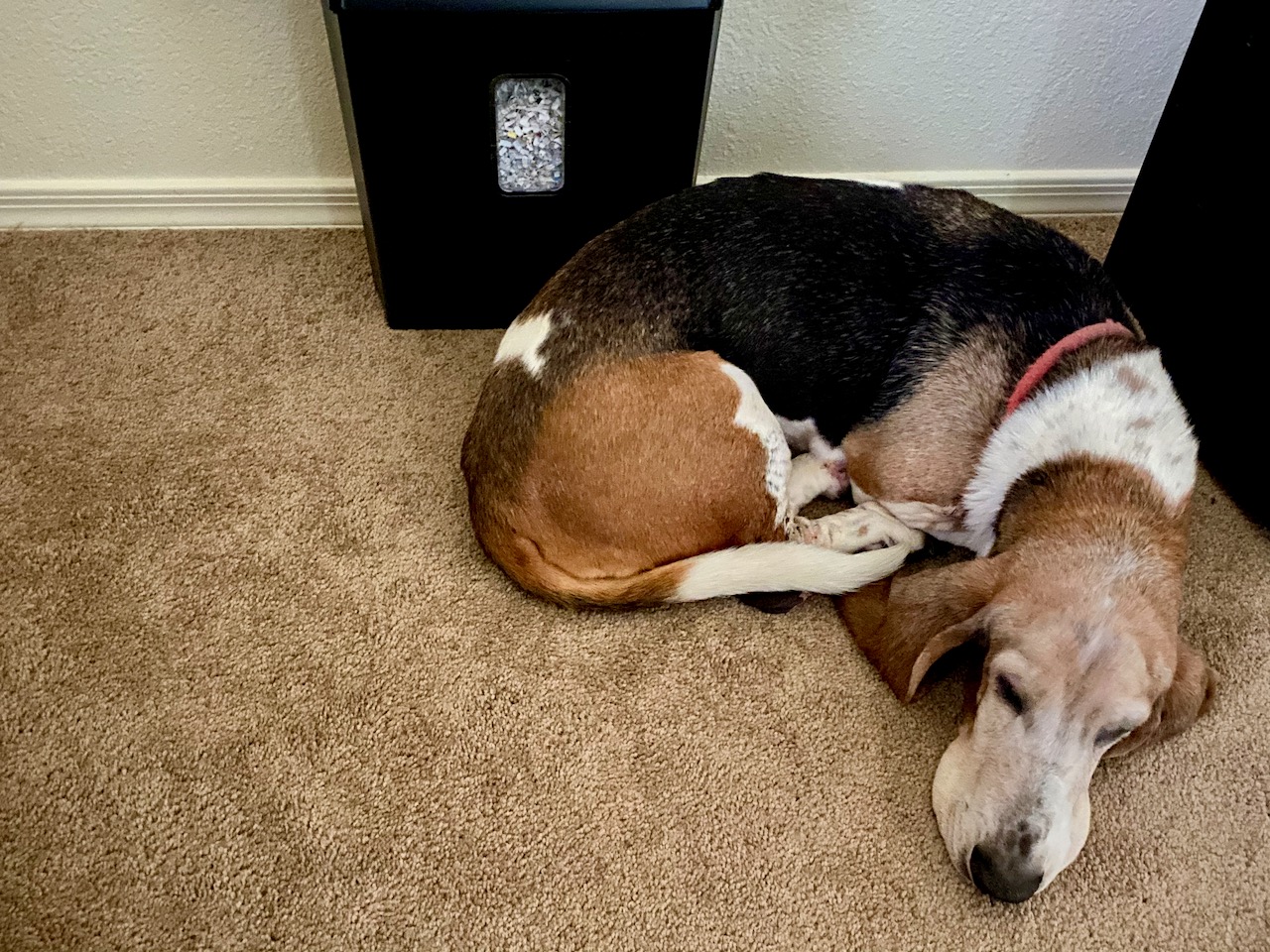 One of her favorite spots to sleep after her morning breakfast. She will also walk in circles in that space before laying down. 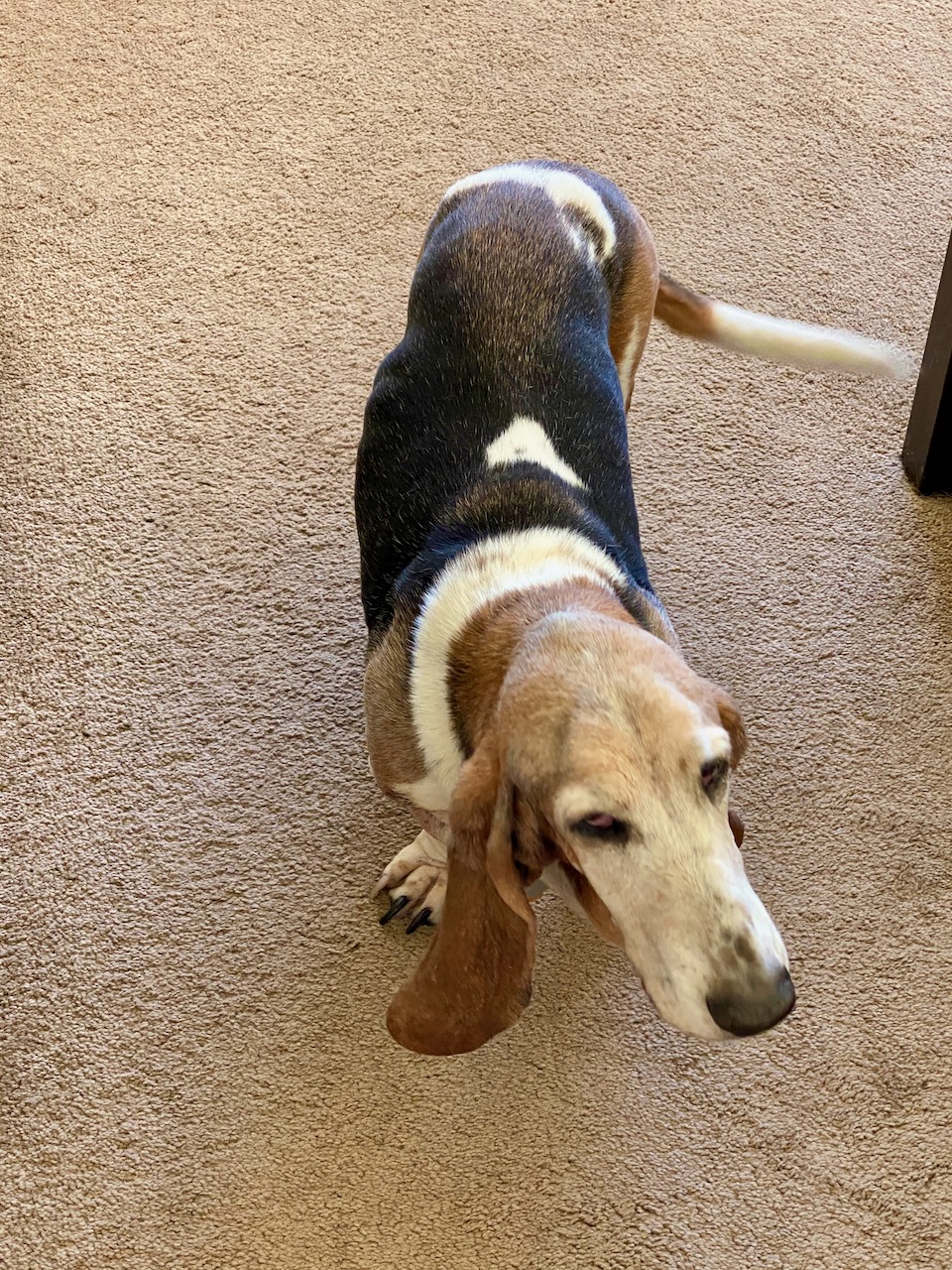 Once again not going to look directly in the camera. 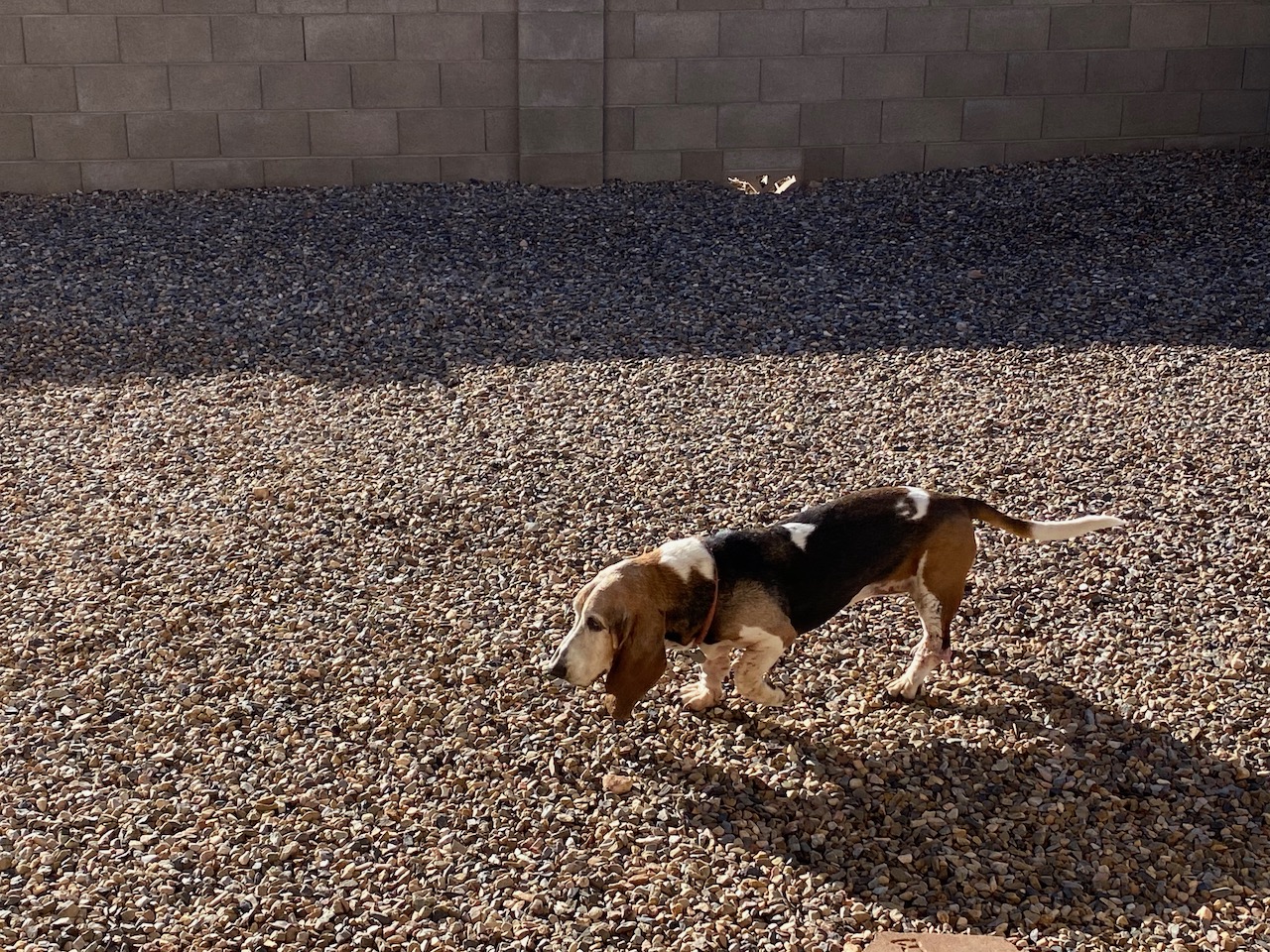 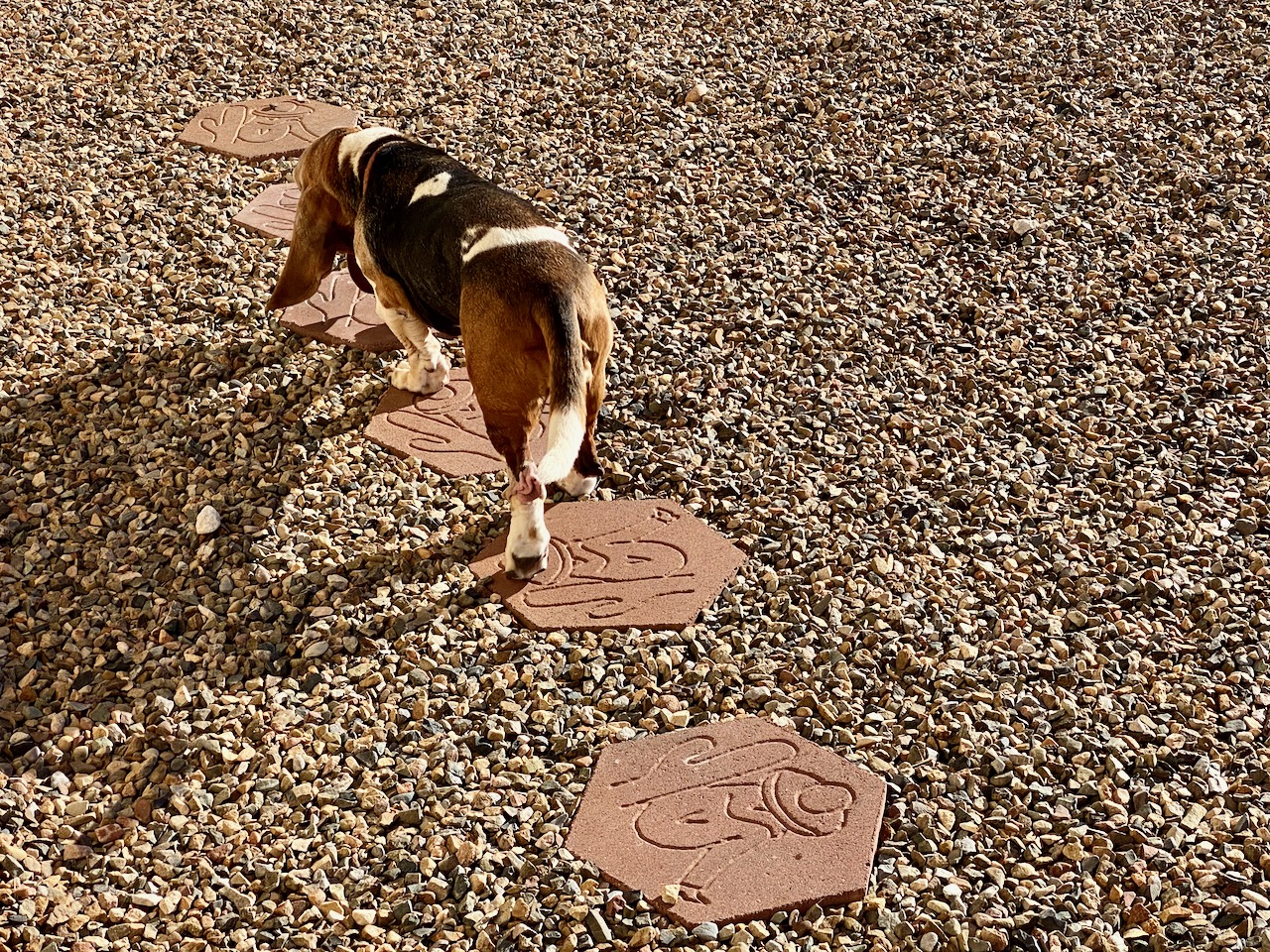 Headed out for a nap in the sunshine. 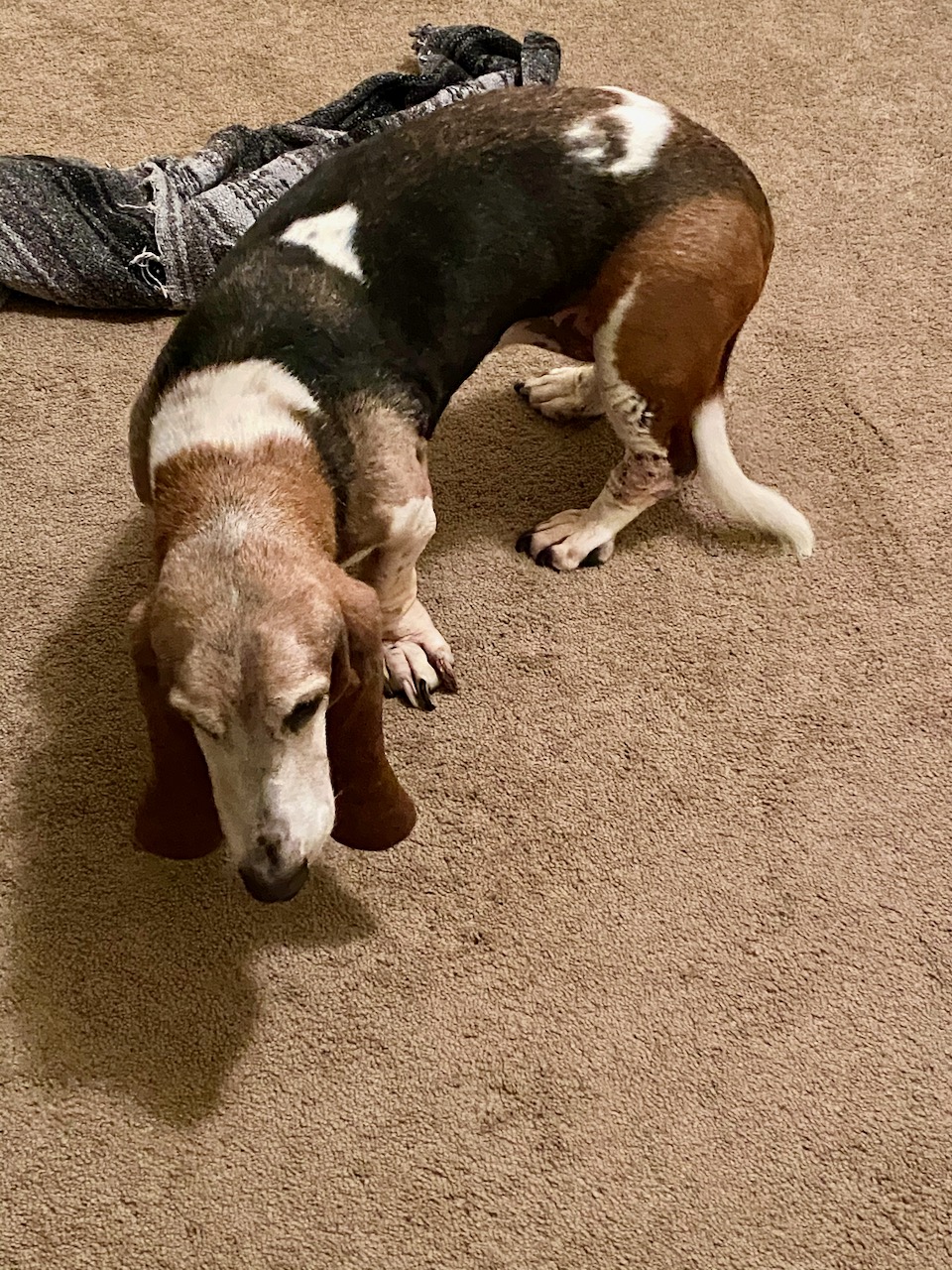 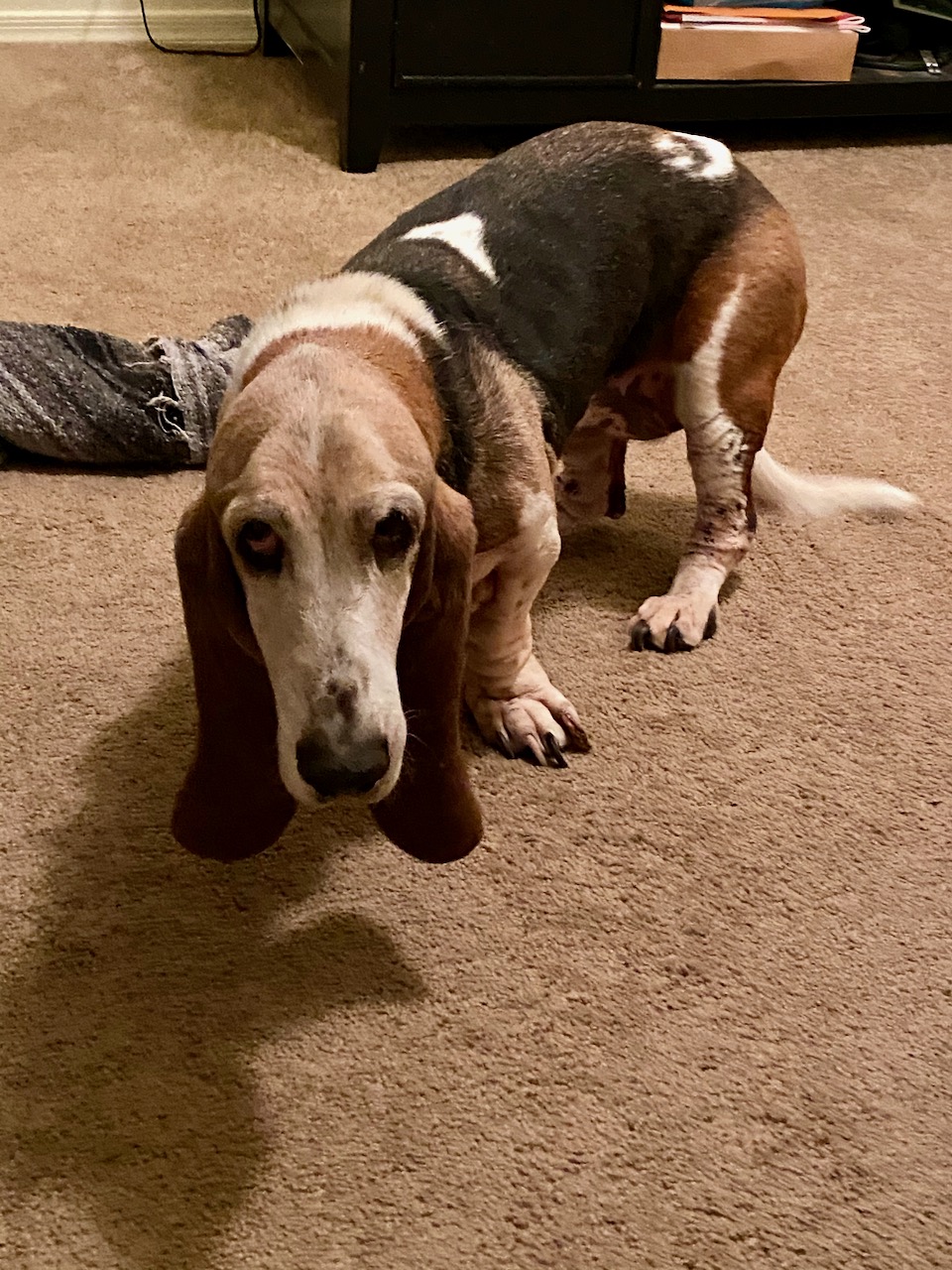 Not happy having every one of her movements photographed. 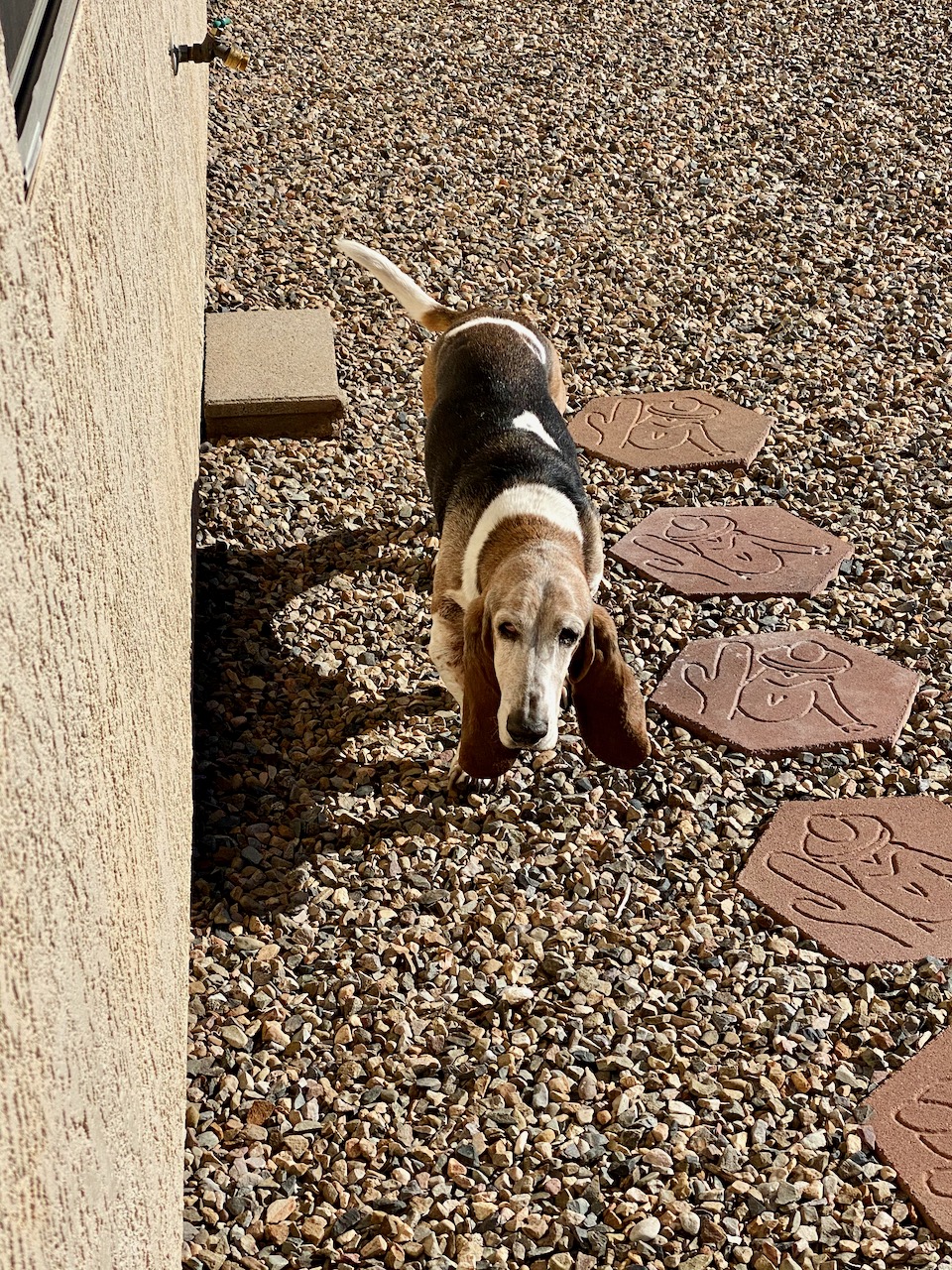 She was sound to sleep in the sun until she either heard me or smelled my scent, that I was outside looking at her. 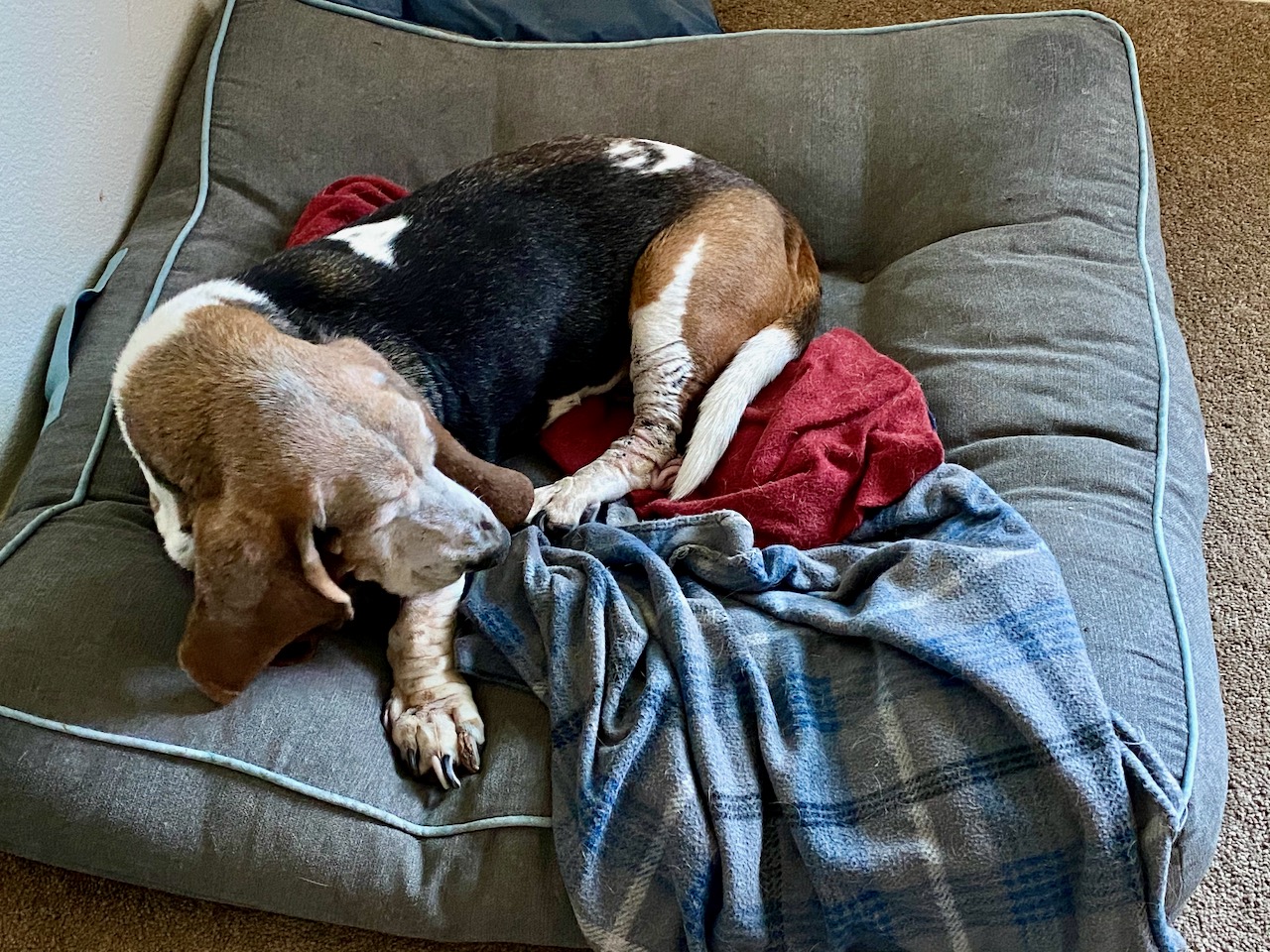 The day is over. Fed twice, many naps and she will do this while I blog tonight. 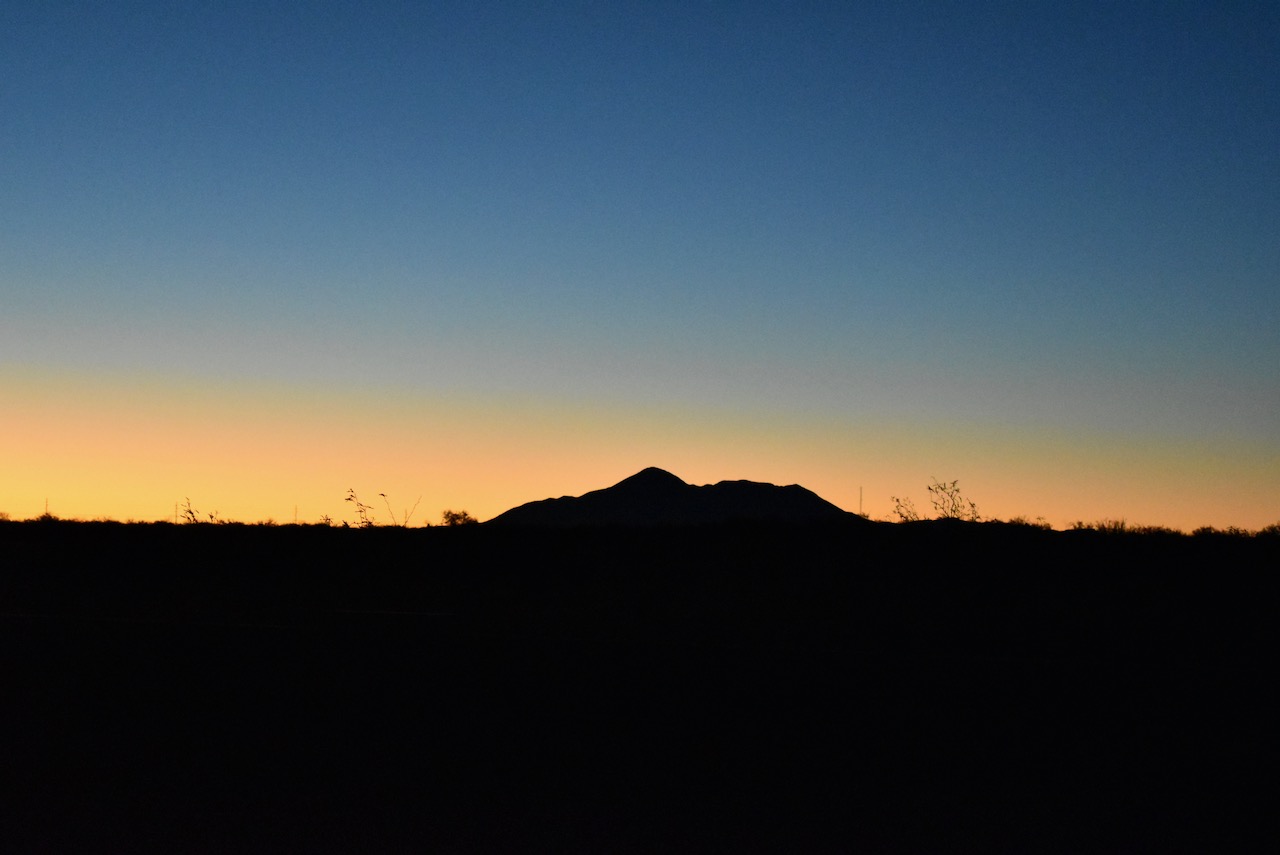 The last couple of days have been busy with errands around town, and a bike ride in the early afternoon. Yesterday I went to Lowes for their Craftsman sales but only bought one thing Craftsman but something else that was also on sale. This morning was going to be a busy morning. With some of my tv channels losing signal Friday night, the Cox technician was here by 8am. He found the trouble to be out in their box in my yard. Of course another technician can only do that kind of work and that's another appointment ... luckily I don't have to be here for them to fix the problem. 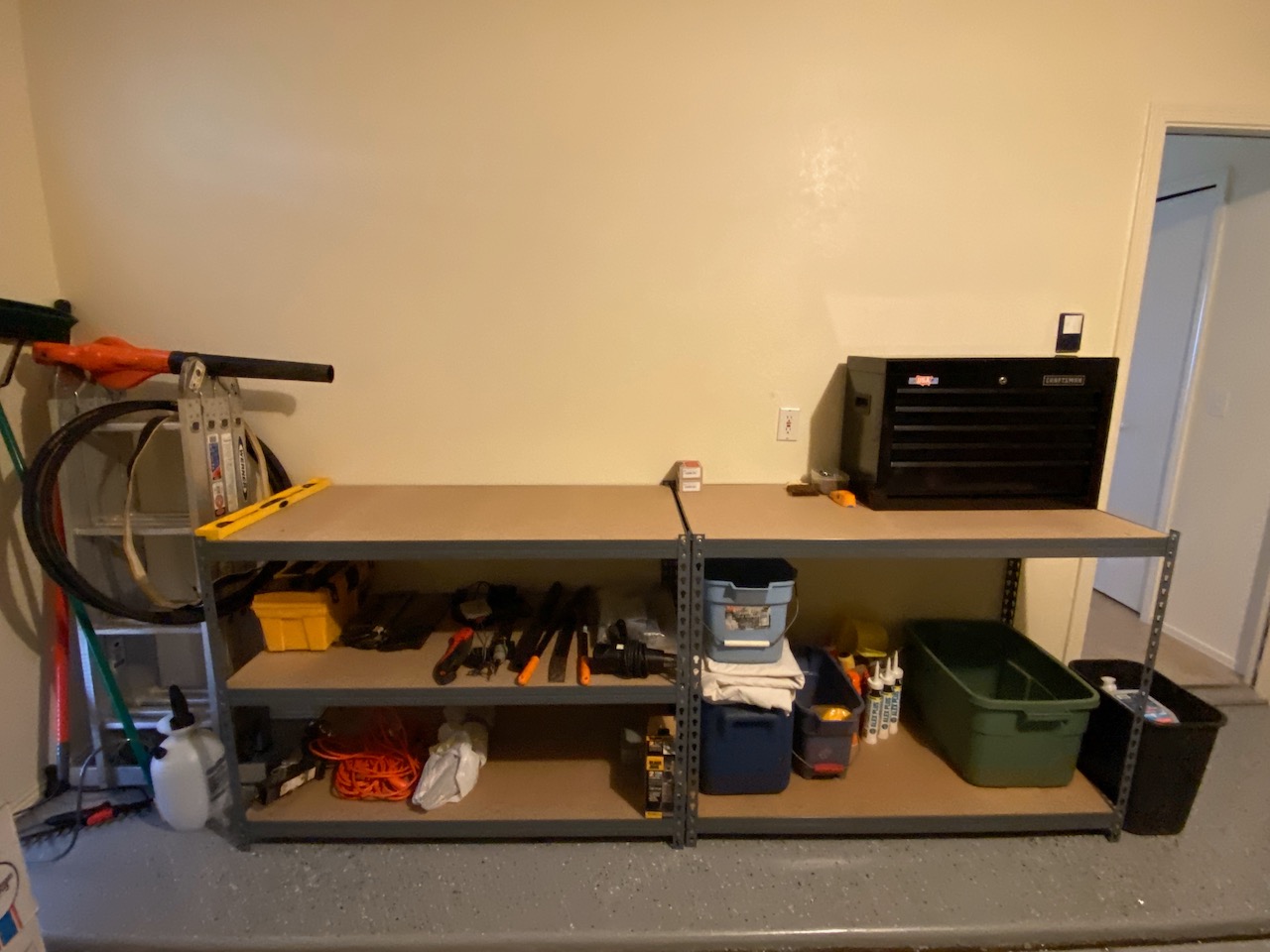 I also had a friend coming over this morning to pick up shelving my neighbor gave me when he moved out. I decided I did not want to put holes in the walls to hang those shelves plus I didn't have that much stuff to fill up a garage full of wall space. There were enough shelves to go around the garage more than once.

While I waited for him to pick up the stuff, I put a shelving unit together to not only hold the few things I brought with me when I moved, but also to have a workbench of some type in the garage. Instead of having different tools, tape, sockets, tape measures and anything else that would go into a toolbox ... scattered in different portable tool boxes and kitchen drawers ... I wanted everything organized in that black Coleman tool box.

The Cox tech, my friend picking up the shelves I had and me getting to this picture, job completed, taking me 3 hours. By 11am I was on the road for a Saturday morning bike ride. 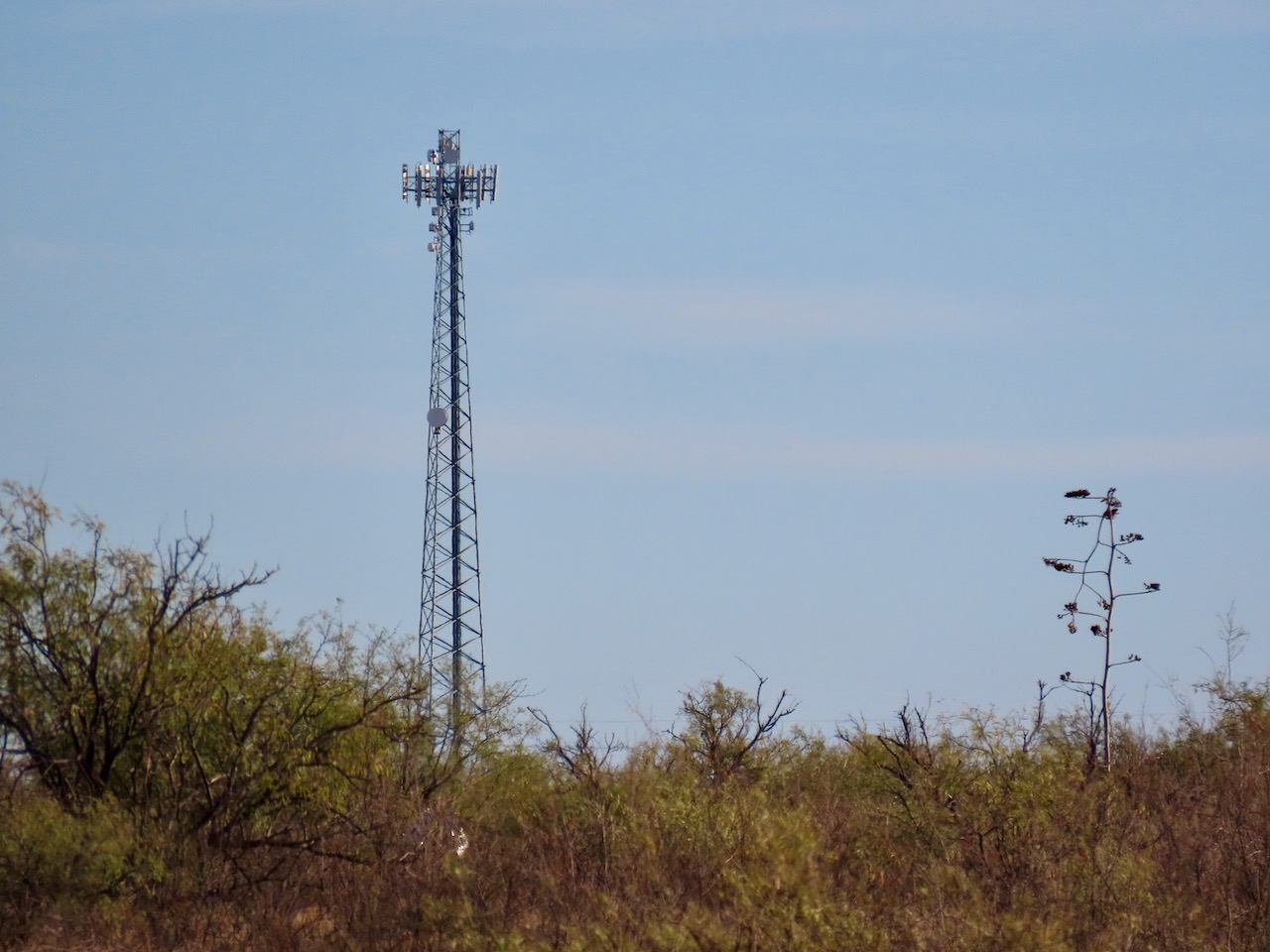 These next few photos are taken from the patio but zoomed 65x and is clearer than the 300mm zoom I use on the Nikon D3500. 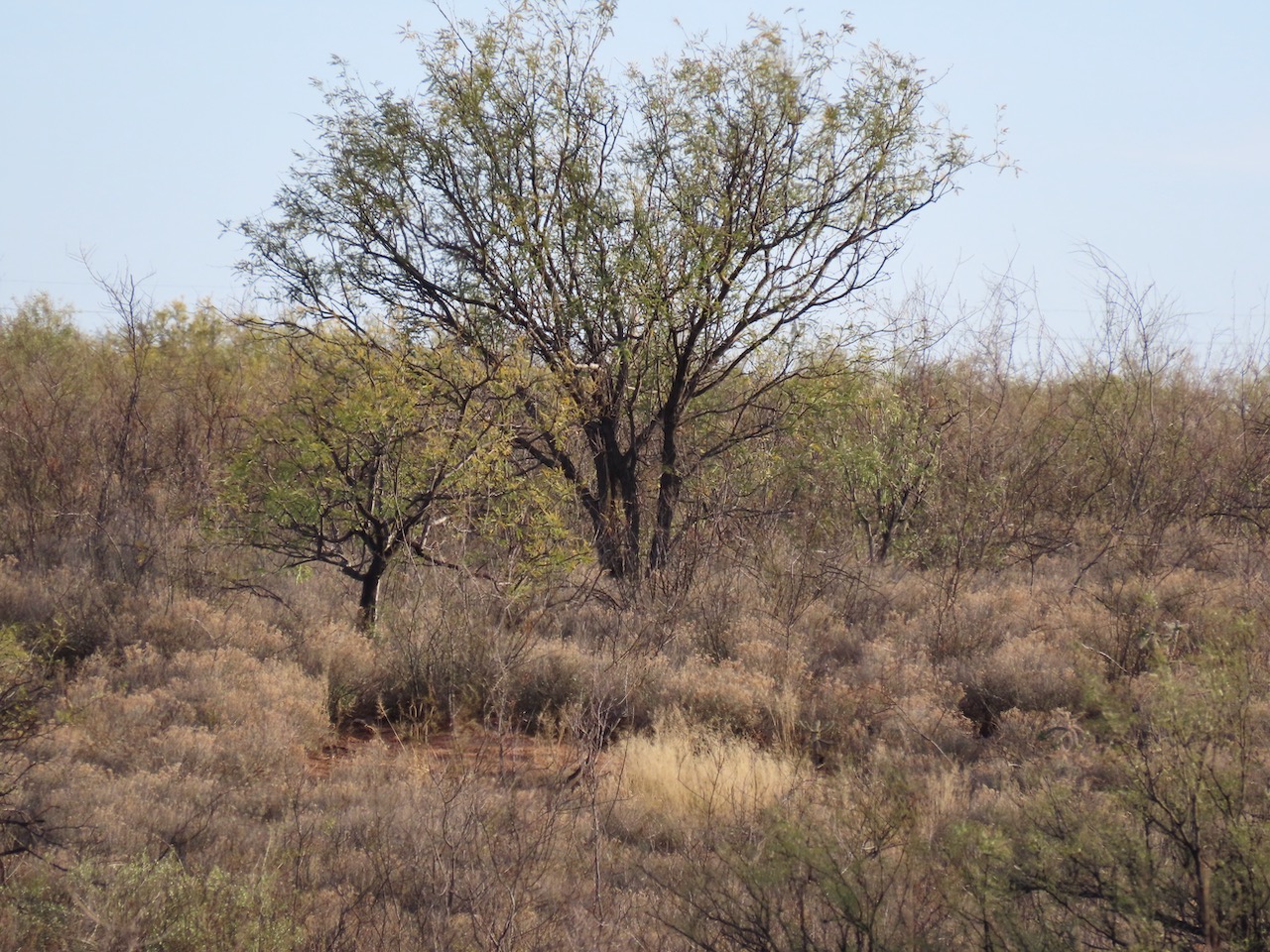 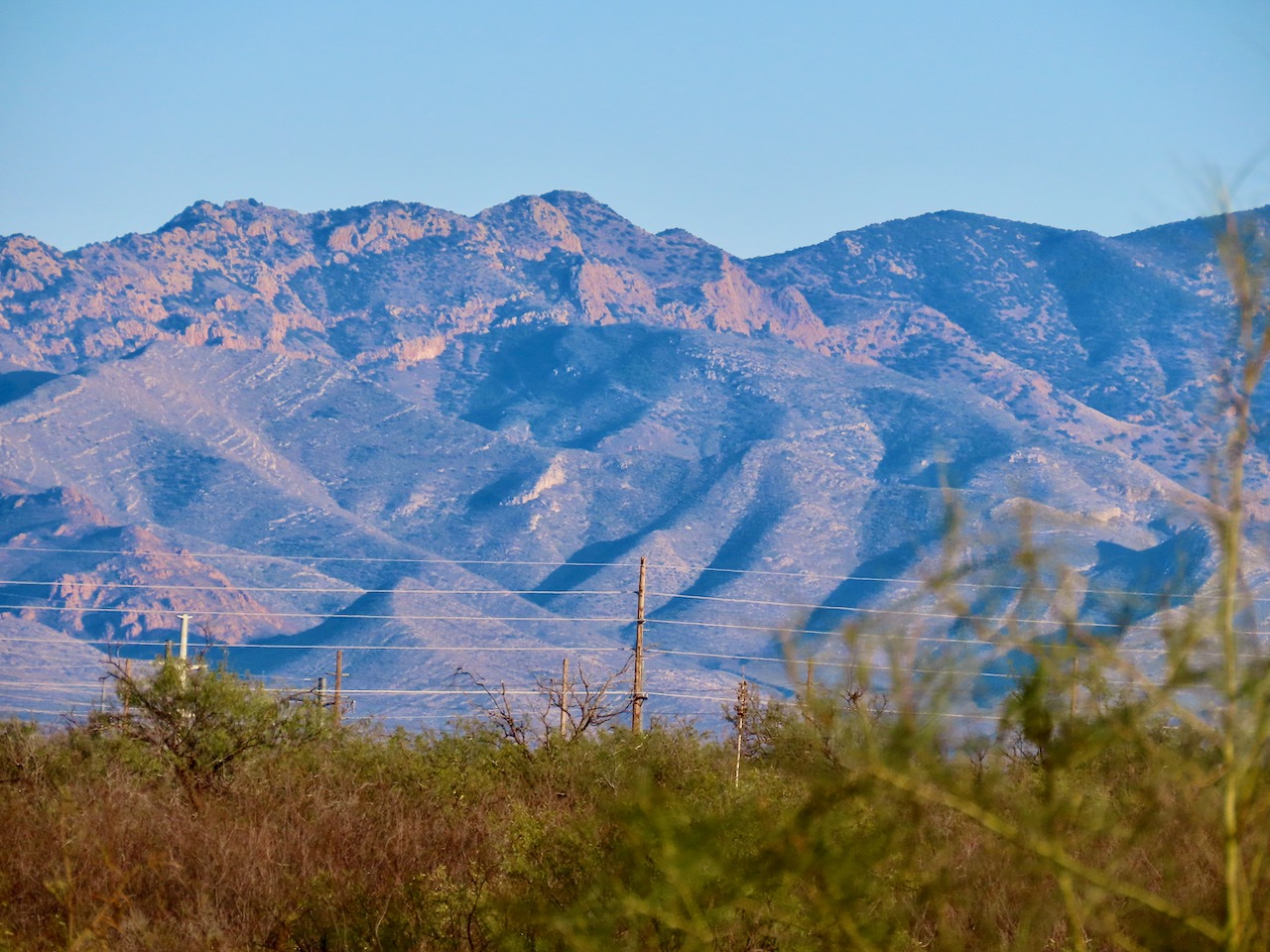 Those are the Mule Mountains down by Bisbee. 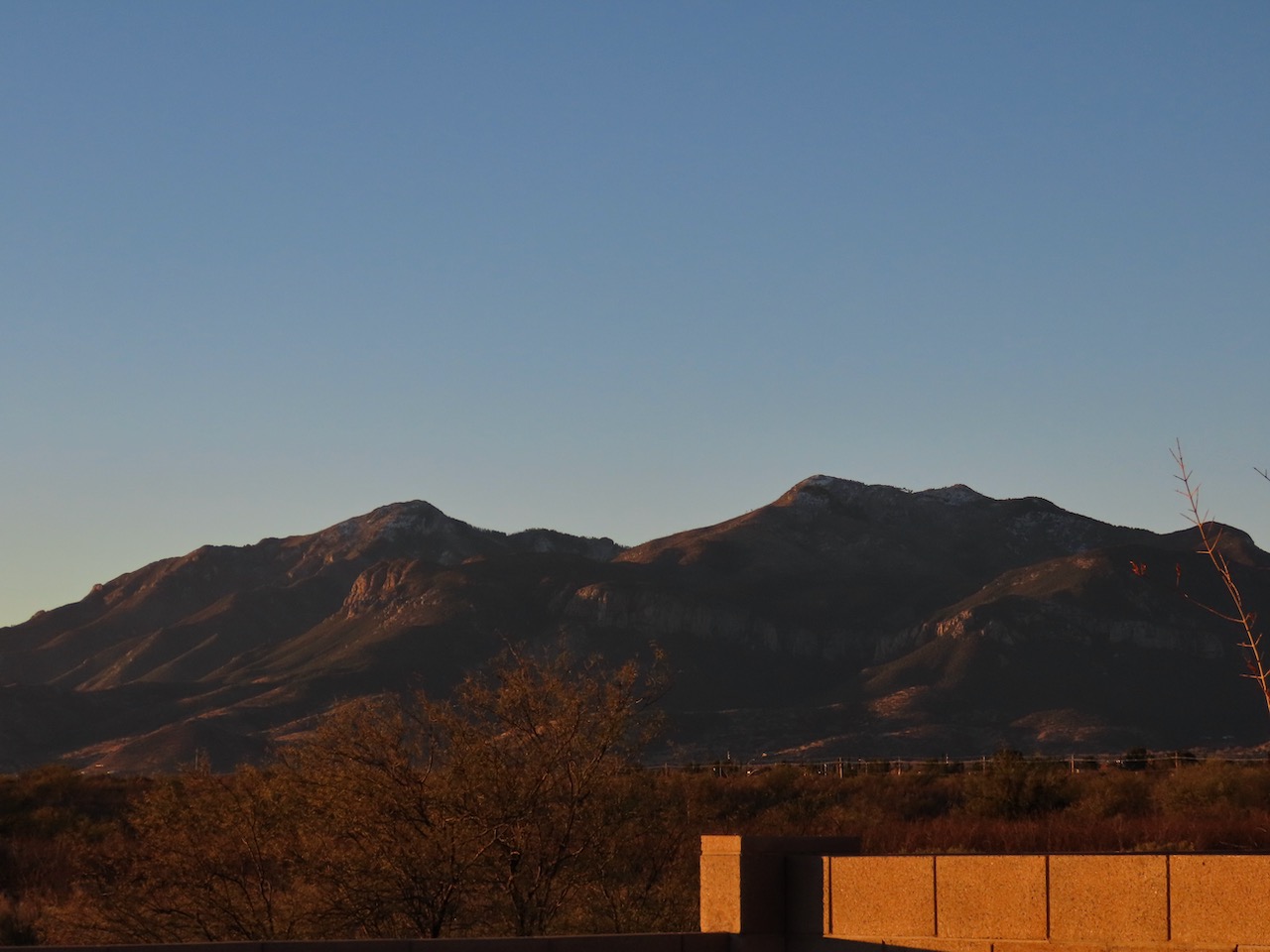 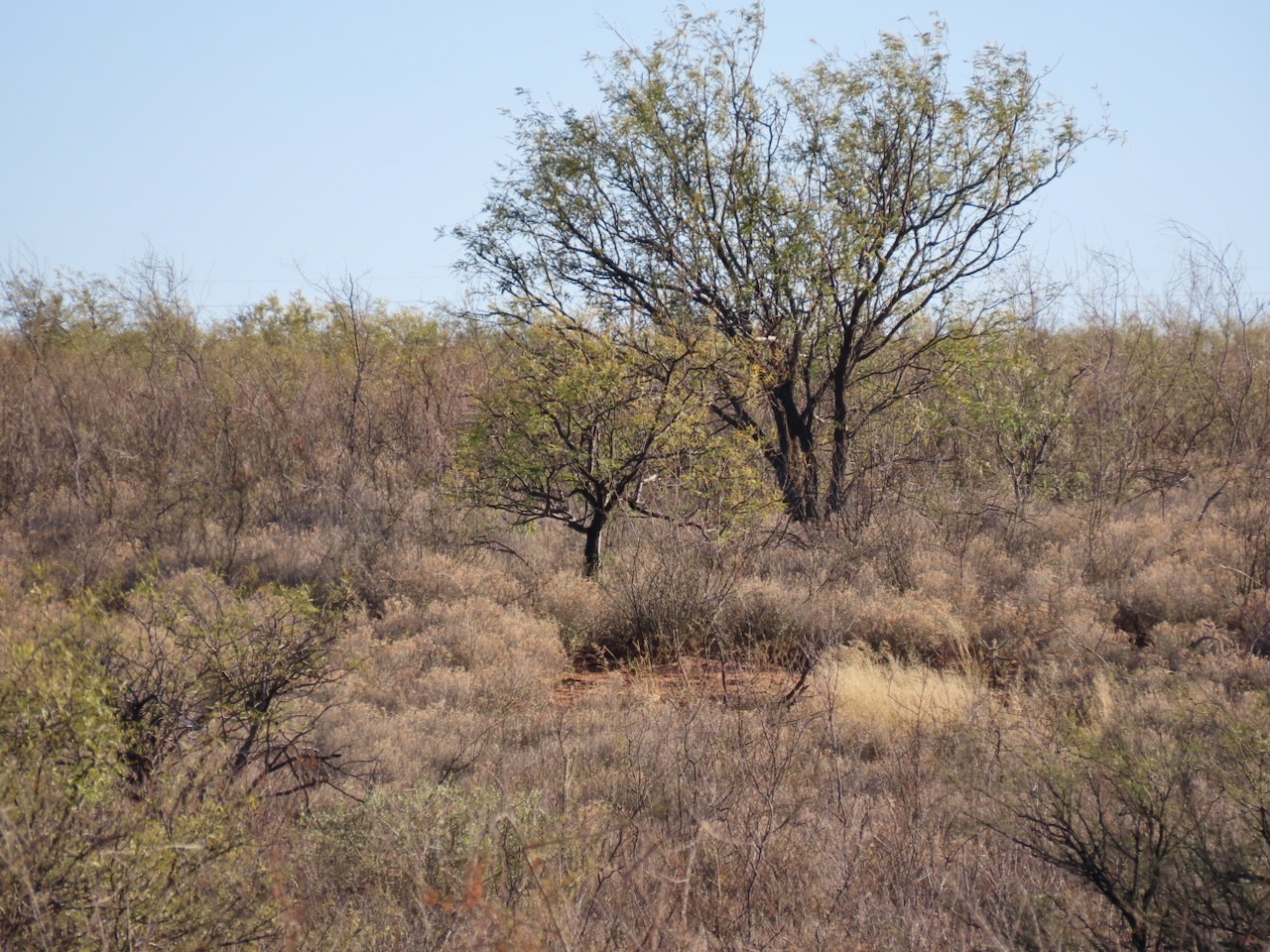 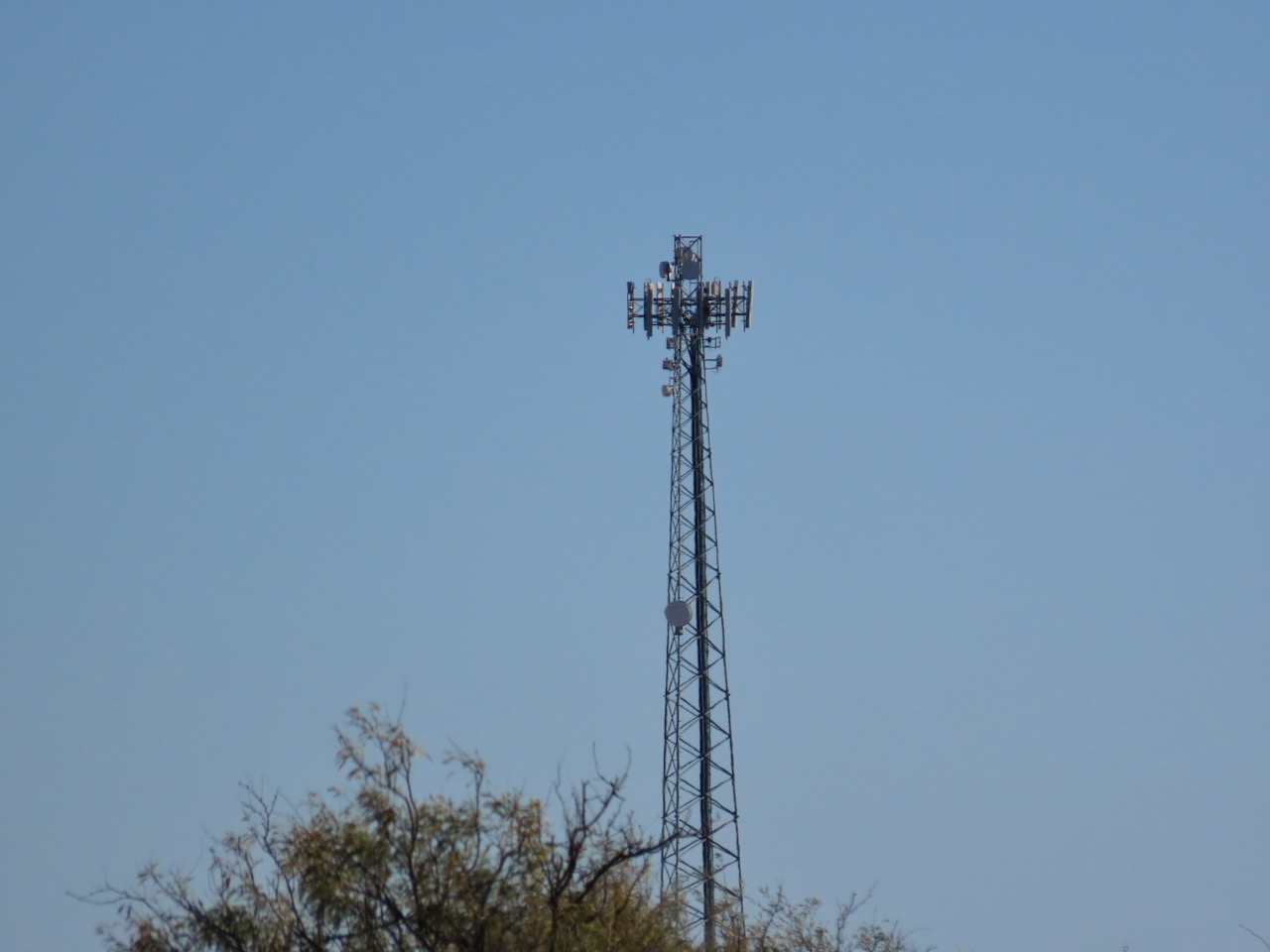 It did get over 70° today but I am finding out that since it is winter, even if it is sunny and high temps, there is still cool wind most of the time. A little too cold for cargo shorts but still sweatshirt weather after the early morning hours.

My hip and lower back feel good after my 26 mile ride today and most of it in a headwind of 14-18mph. For the last two days I have applied an ice pack to the spot that is sore plus taking those natural supplements to heal tissue and promote healing of muscle and bone. I plan to at least ride a short ride tomorrow.

I'll try to get out tomorrow for some local exploring. I have some new ideas of where I am going. I might reverse my riding to go in the morning with cooler temps and the exploration in the afternoons. Stella did not mind not being the featured hound tonight ... she sleeps as much as Heidi does.