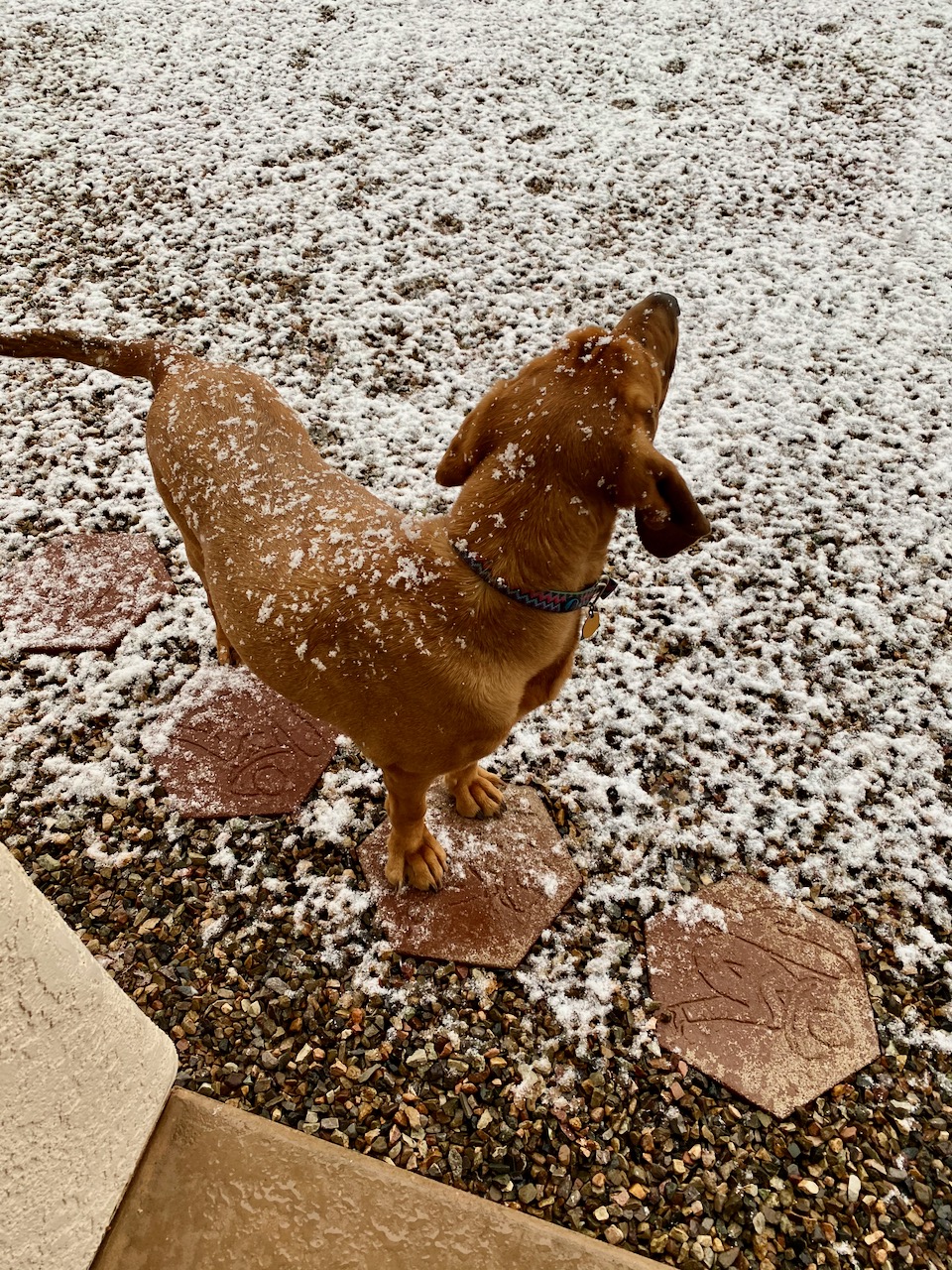 Snow was in our forecast for sometime after midnight. We had a winter advisory warning out until Saturday morning for areas above the 4,500' elevation. By the time we woke up on Friday morning that prediction of 3" of snow had changed to 2-5". It would be our first snow since moving to Arizona. It was expected more than a surprise because of the weather data research I had done before deciding to move the this great area. Believe me this is nothing compared to what we were used to. Although ... the hounds acted like they had been Arizona hounds their whole life. 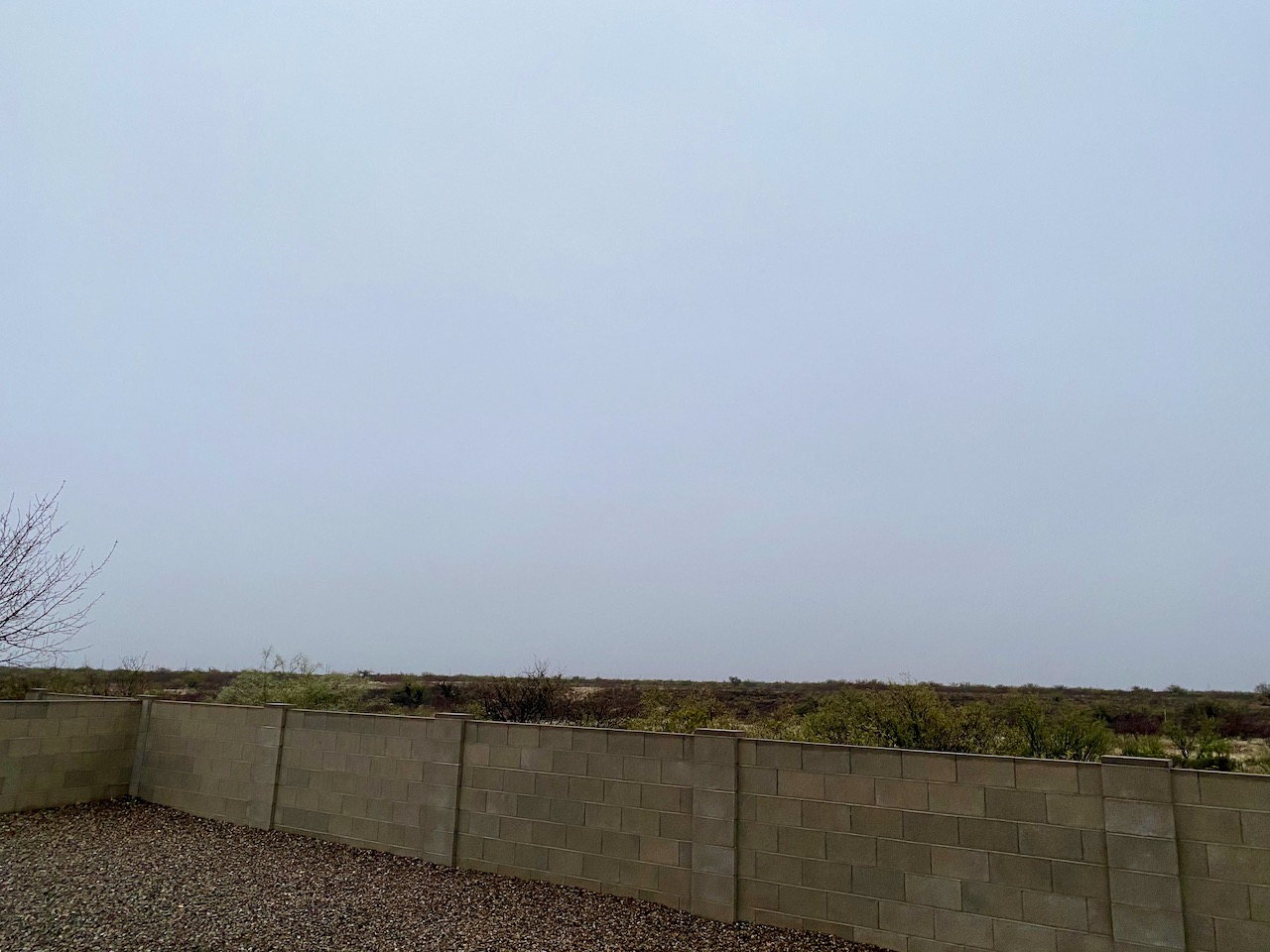 Stella was nudging my hand sometime around 4:30am wanting me to get up. She didn't need to go outside, she wanted to eat breakfast. Without moving a muscle I told her to go back to sleep in the room filled with darkness. Luckily she obeyed and I was able to get another 35 minutes of sleep before Stella officially called it the start of the day ... she started howling at 5:05am ... in the dark. 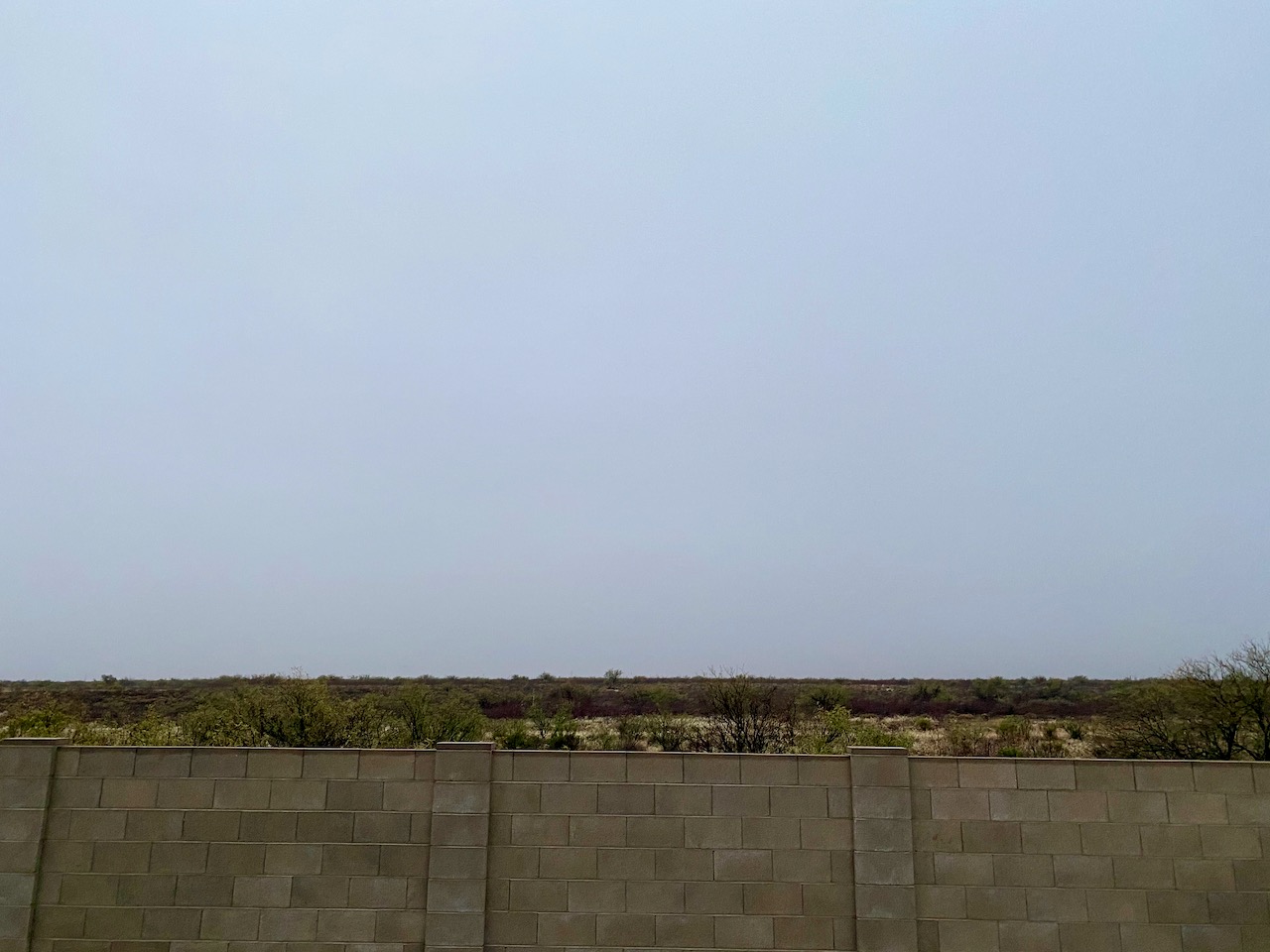 That howling was the same one I hear in the afternoons if I am late feeding her lunch so I knew she was wanting to eat. It was the first time I ever heard her howling before we were up for the day. I hope this isn't her new routine ... even if it is only for a few weeks. 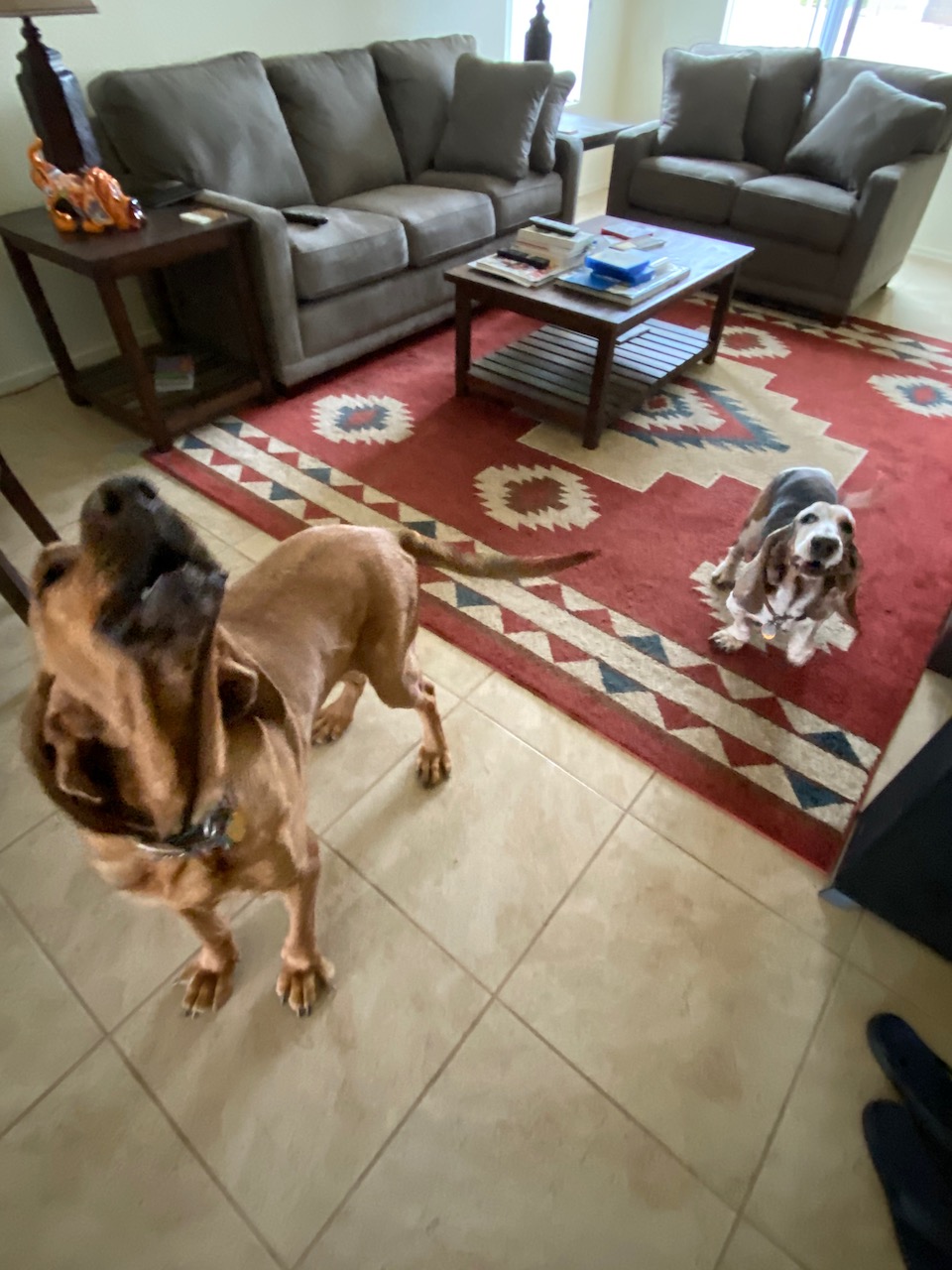 This will give you some idea what that howling looks like. This is from Wednesday when I returned from my Miller Canyon hike.  Once she starts howling then Heidi will join her by barking until the kibble is in their dishes. 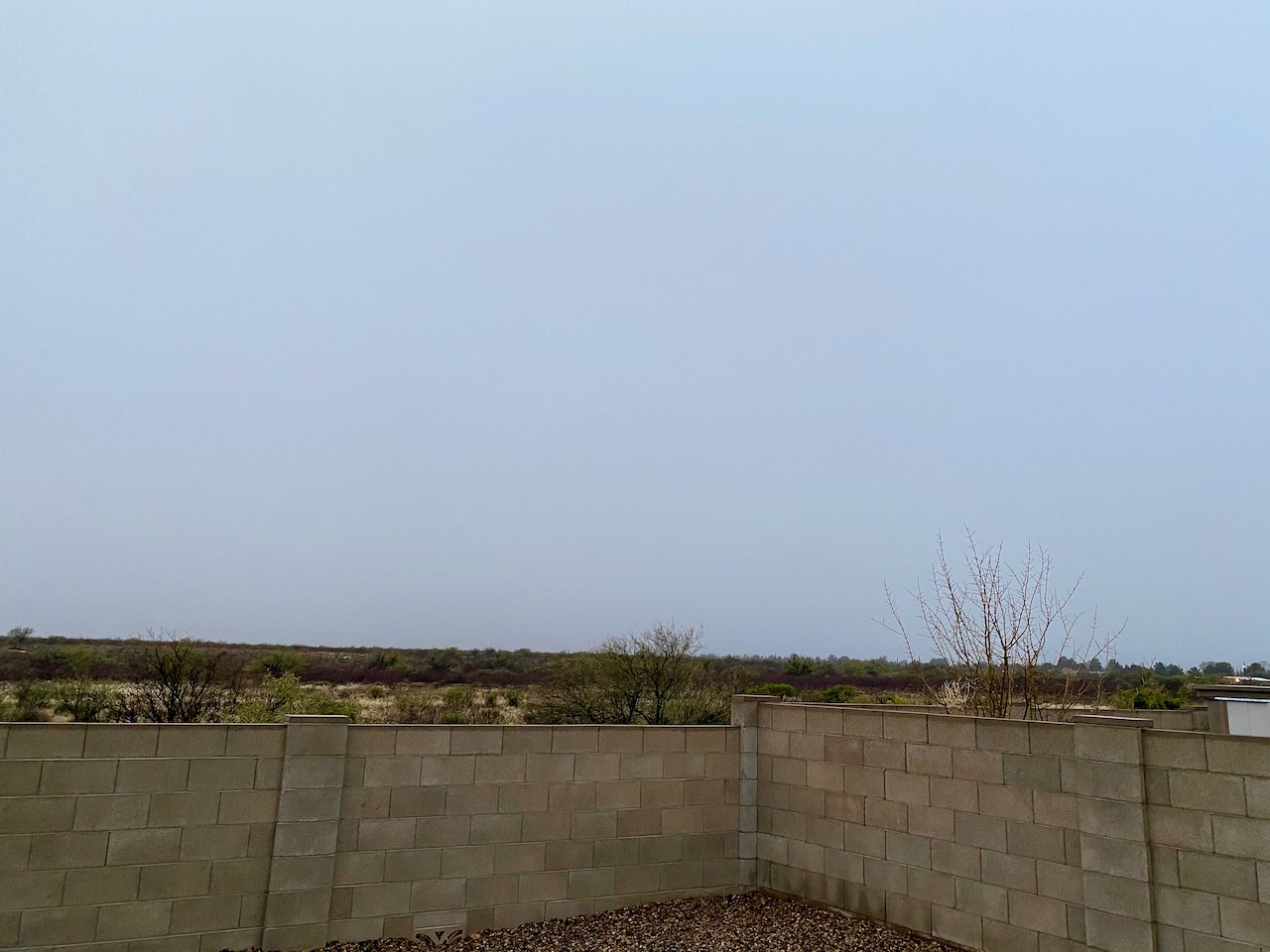 Scanning the fence line this morning once it was daylight, as you can see the mountains we normally see were no where to be found and I did not see any signs of overnight snow. I started thinking the weather forecasters were not any different than the forecasters back in 'the tropics' of southern Indiana. 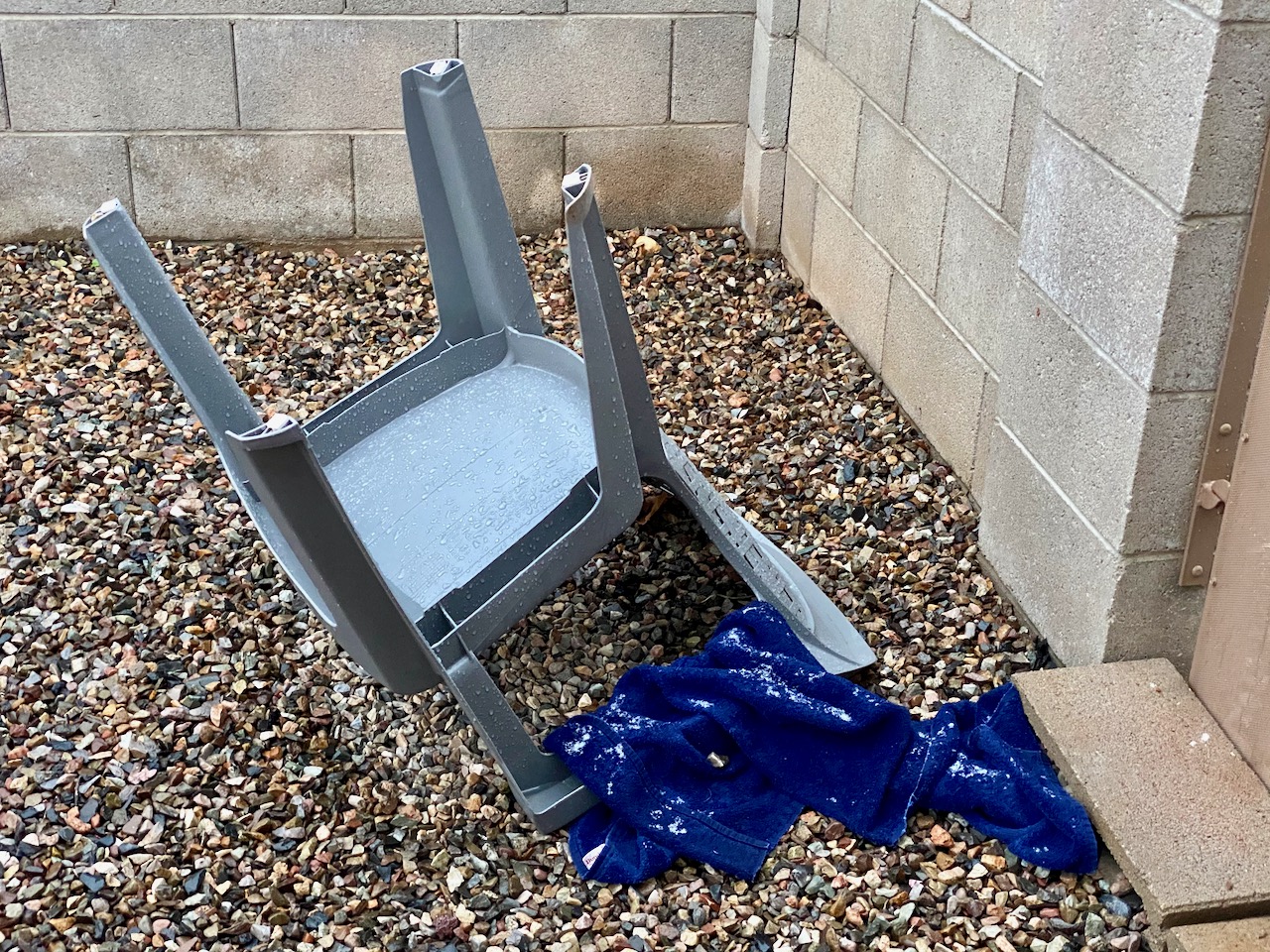 When I first glanced I thought my patio chair that was blown off the patio during the night might be filled with snow in the bottom. Those little white tabs on each chair leg looked like snow. I was wrong. Only white plastic pieces for the chair legs and that was nothing but rain on the chair. You can see a little snow residue on the blue towel. Nowhere near the 3" they talked about after midnight. 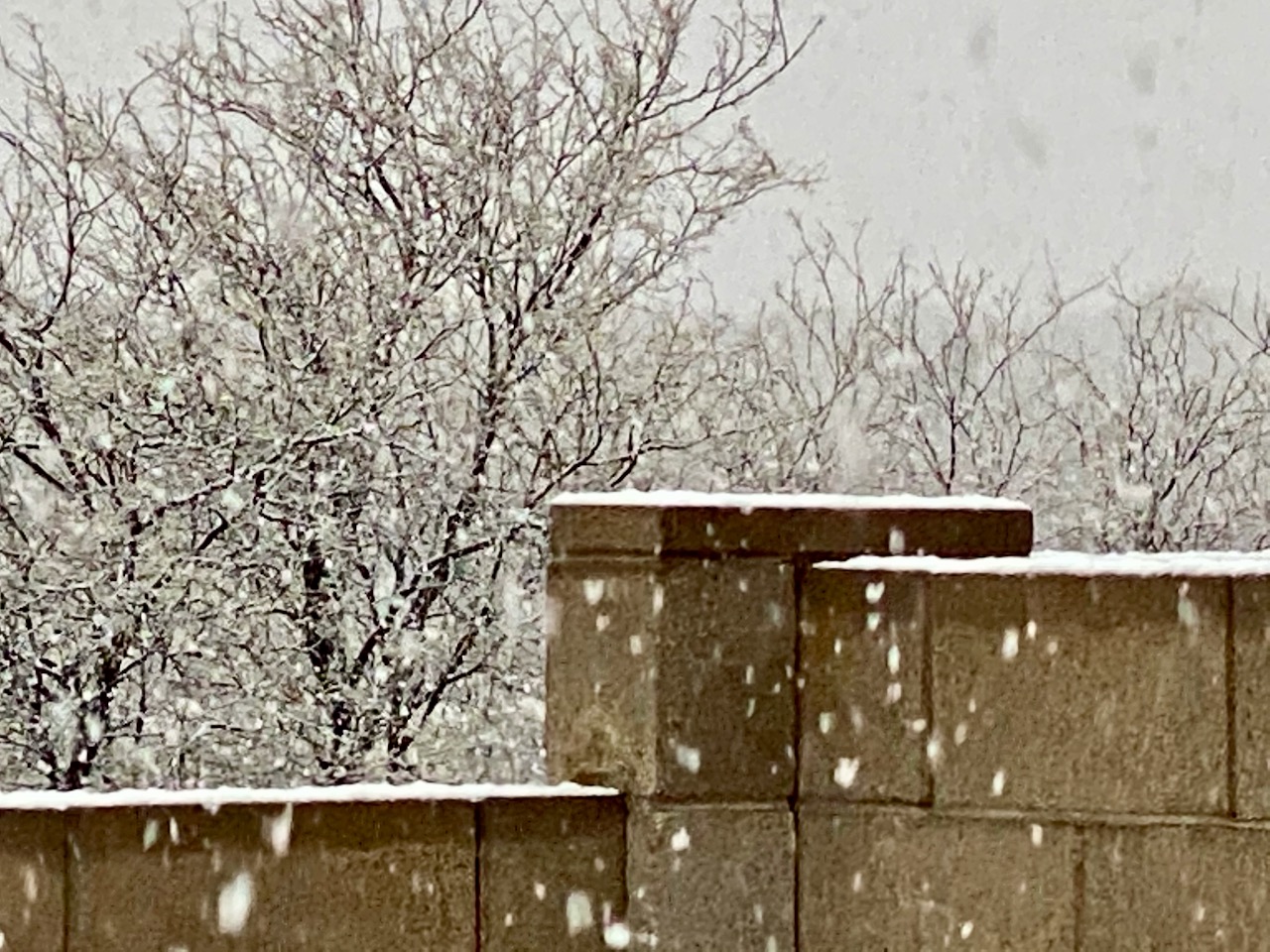 While I was back in the computer room I didn't realize the snow 'storm' had stated without me or the hounds. It was only when I got up to get more coffee did I see it was snowing outside. If we had a full day of this type of snowing I could see the 5" by the end of the day. It was going to get too warm to do that though. The scouting report I had about snow in this area, it is always gone by the end of the day. After two attempts to go outside but immediately turning around on the patio to go back inside, Stella could no longer hold it and had to go out in the light snow fall to pee. Heidi ??? Not a chance. She did the immediate turn on the patio hours ago and was back on her bed in the deep corner of the bedroom sound to sleep. Both hounds had proved to me this morning, they were officially Arizona hounds. 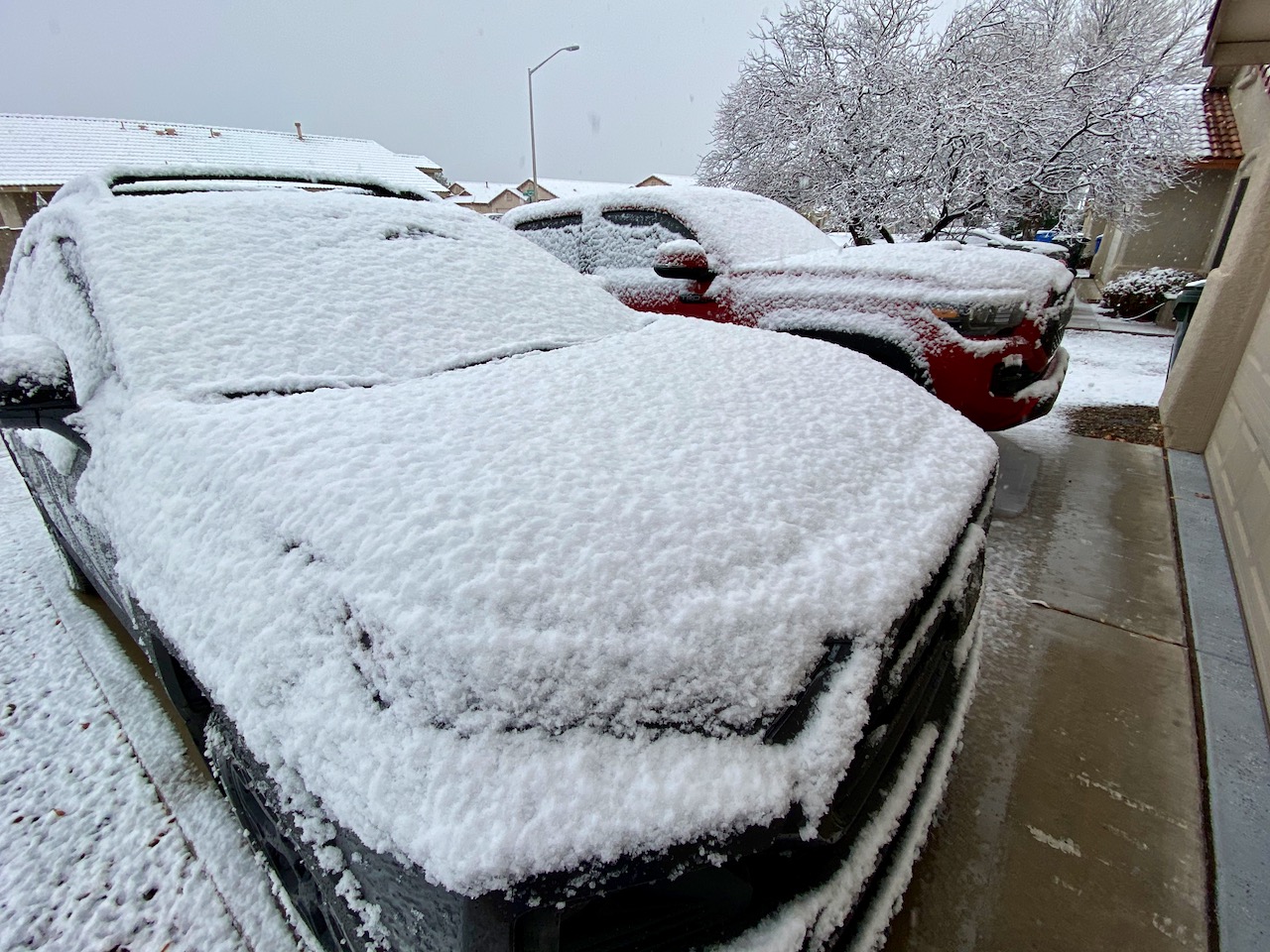 Just for proof to text some out of state friends, I found the one place that had the deepest snow. 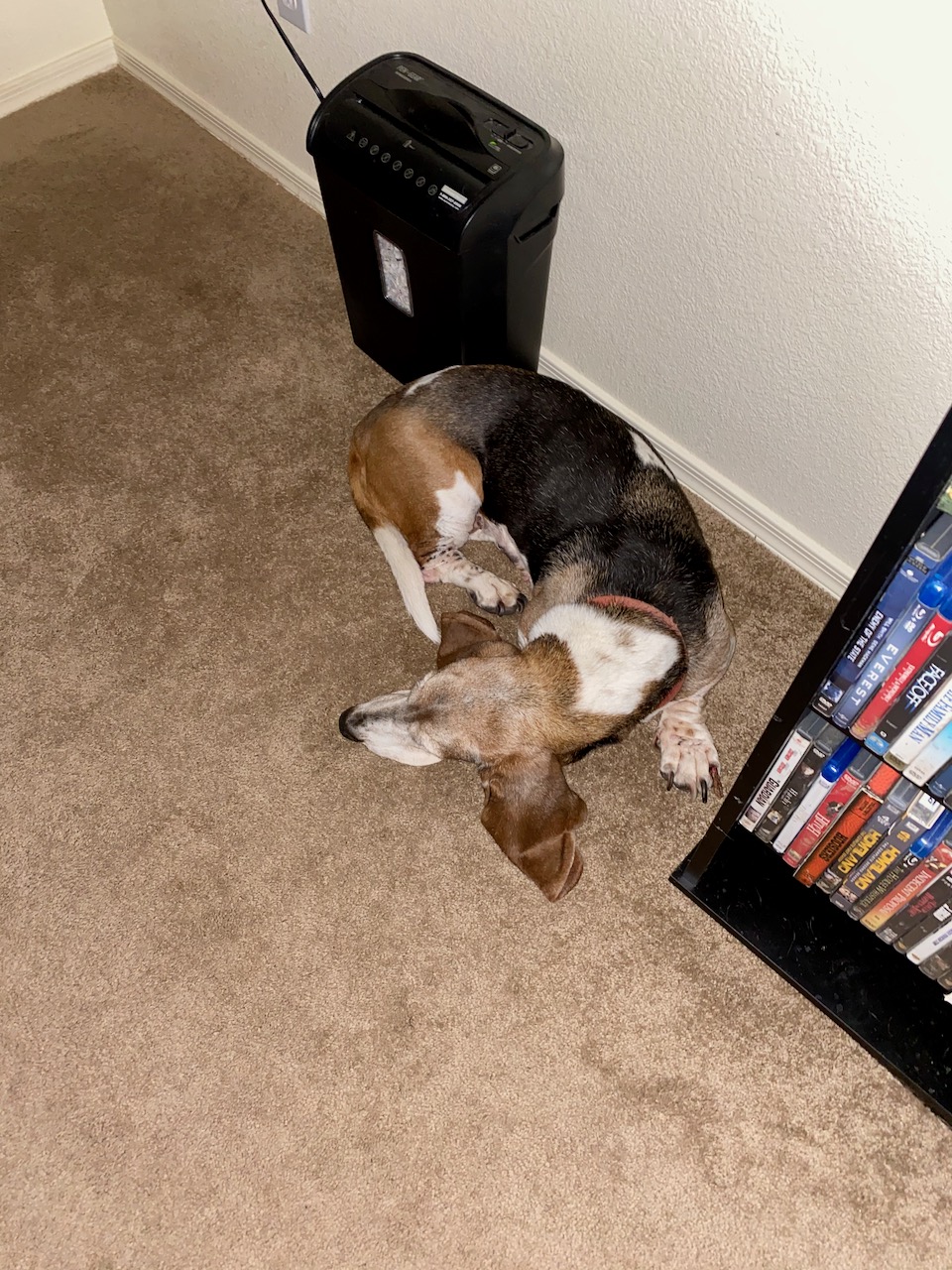 Some time during the morning she had moved from her bed to her other favorite sleeping spot in the computer room. 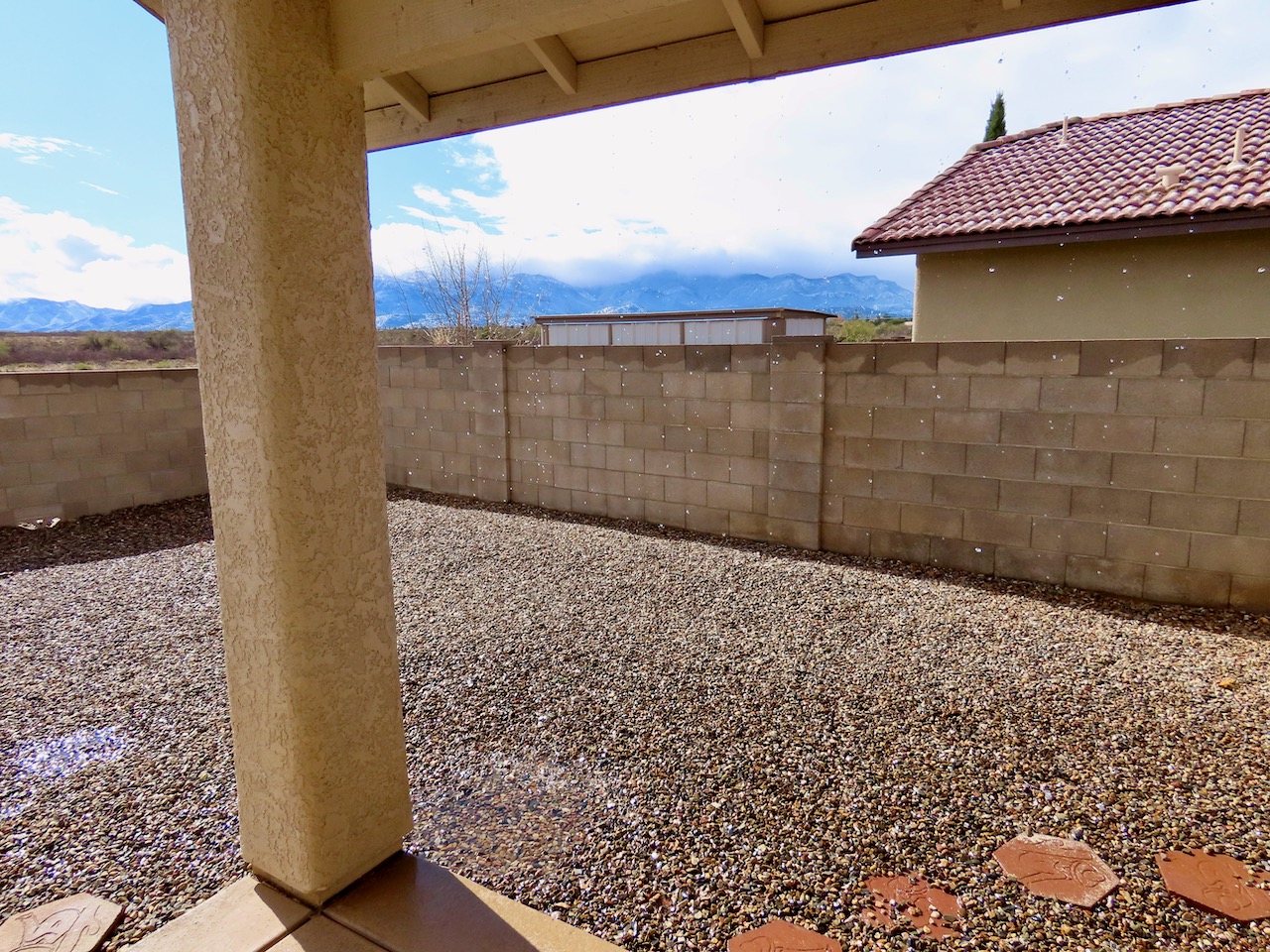 It wasn't 3 hours later I hear the water dripping from the rooftop. I look outside to see sunny blue skies and not a trace of snow in the yard. You can barely see the drops of water coming off the roof to the ground. 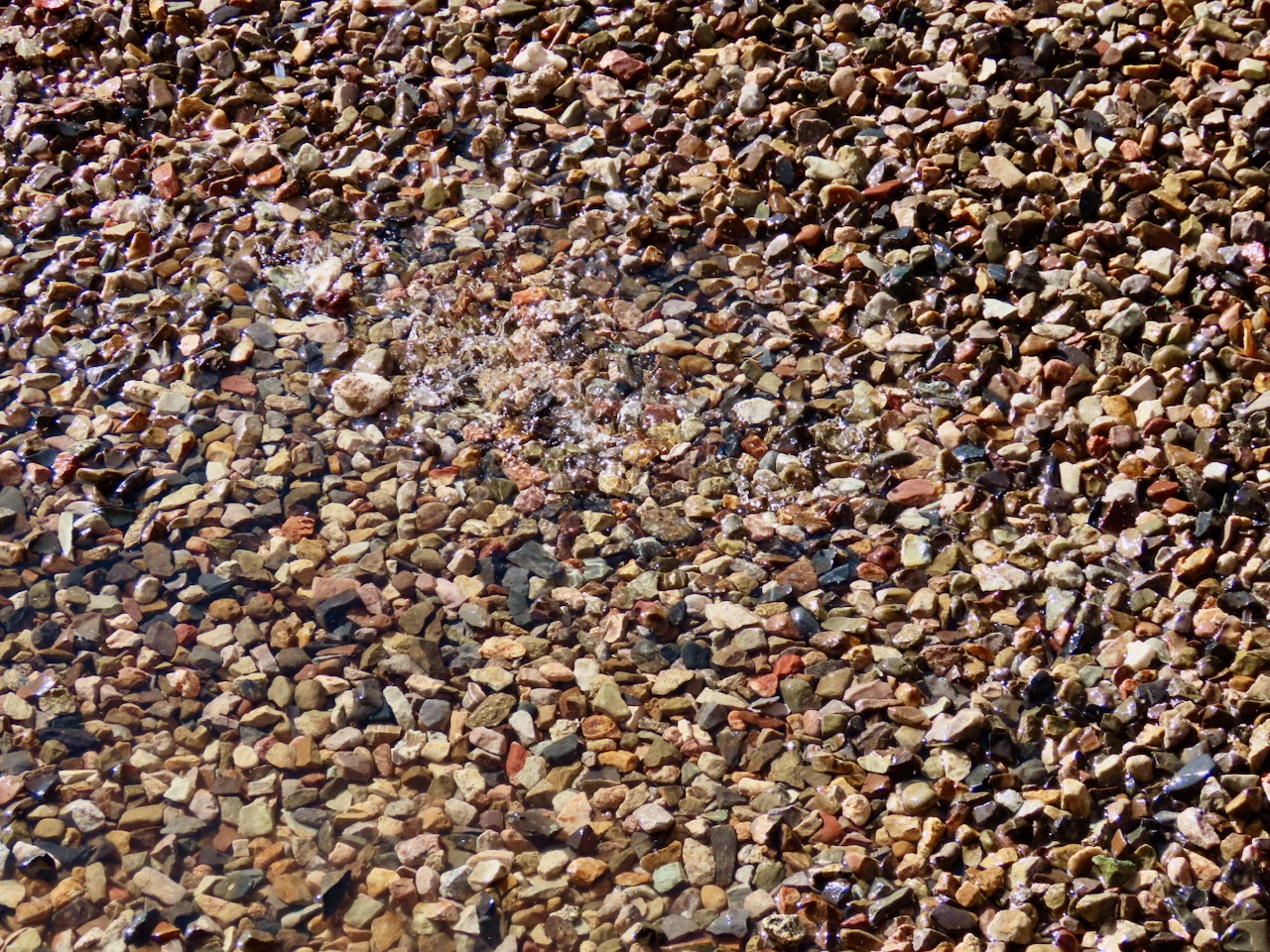 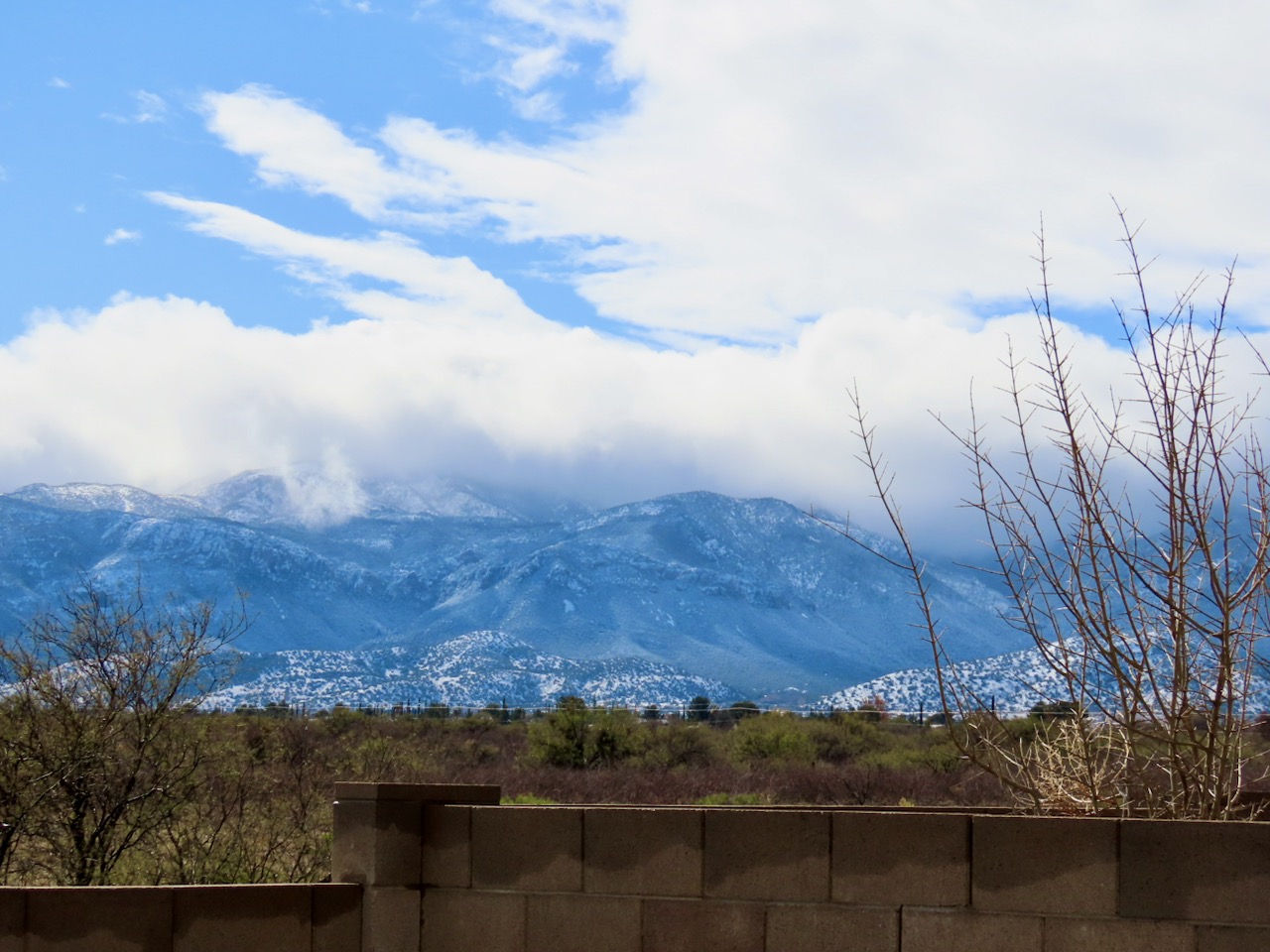 It looks like the foothills had some snow but all of this was much less than I expected. 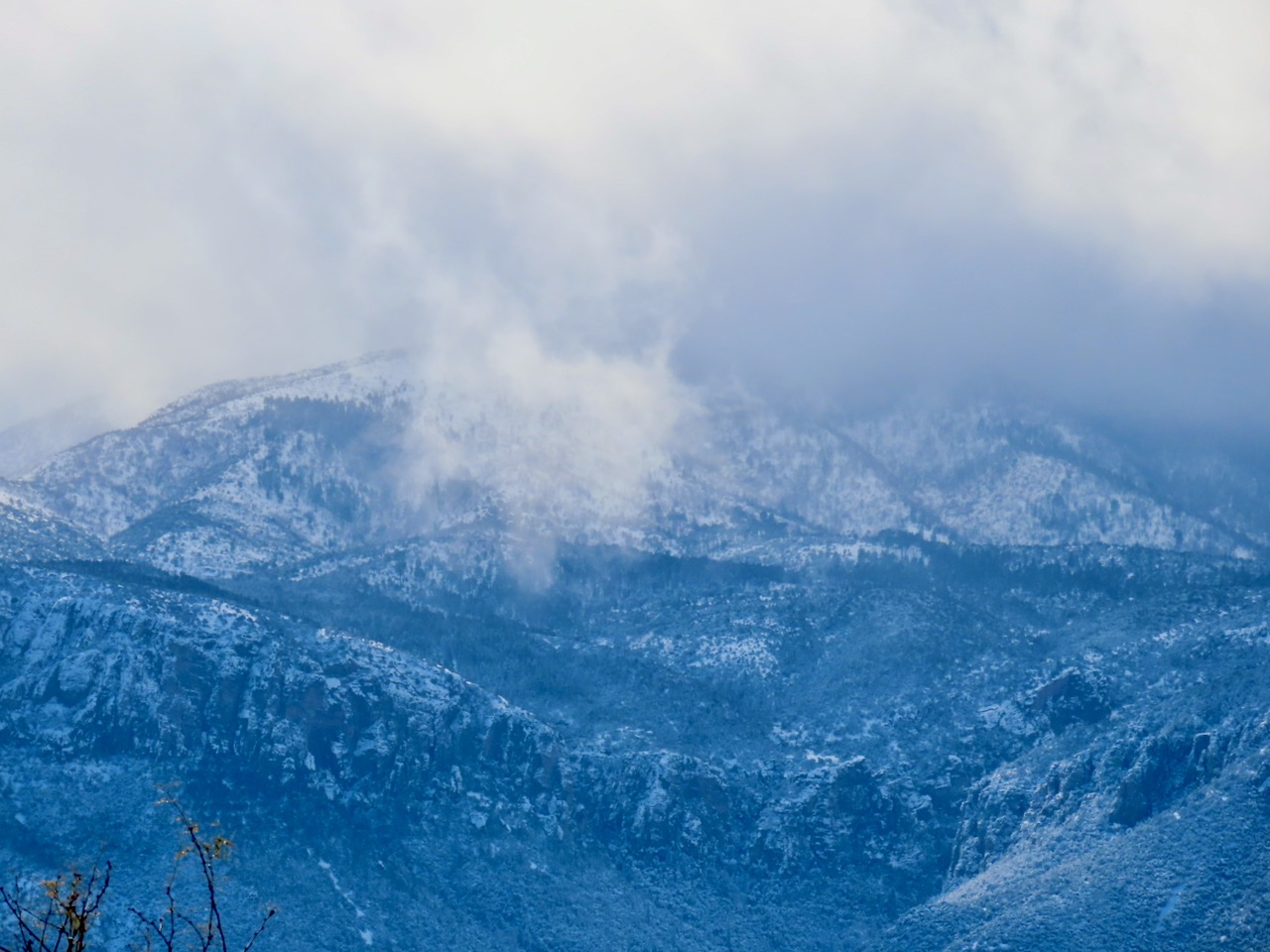 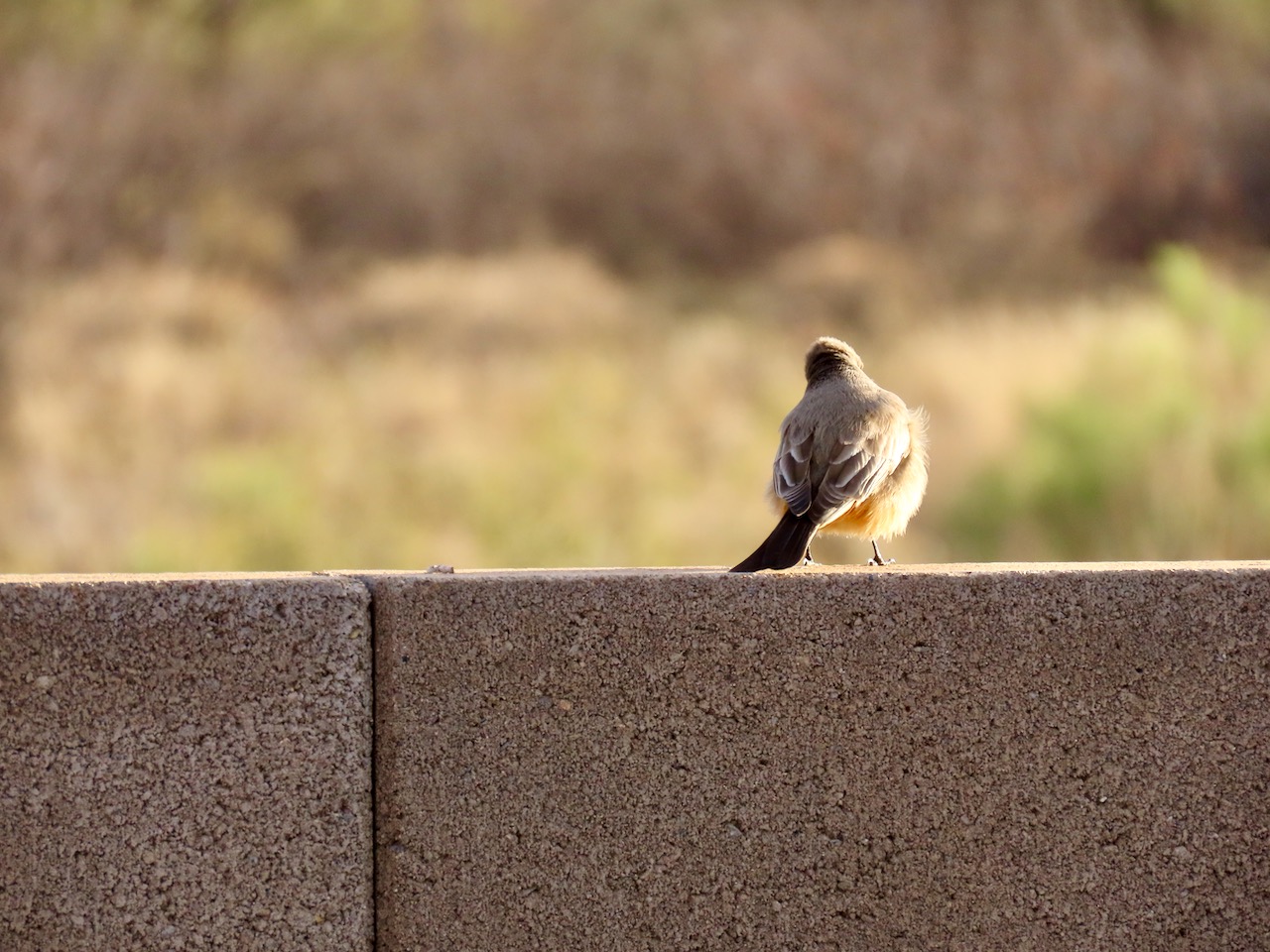 It was a photo of a bird like this on a Facebook Group for The Wonders of Cochise County that I decided to try the Canon Power Shot SX70. I mentioned the other day in the right kind of light I get better results when zooming than I get on my Nikon D3500 70-300mm lens. If you look closely at the bird I think you will see the quality I am talking about. 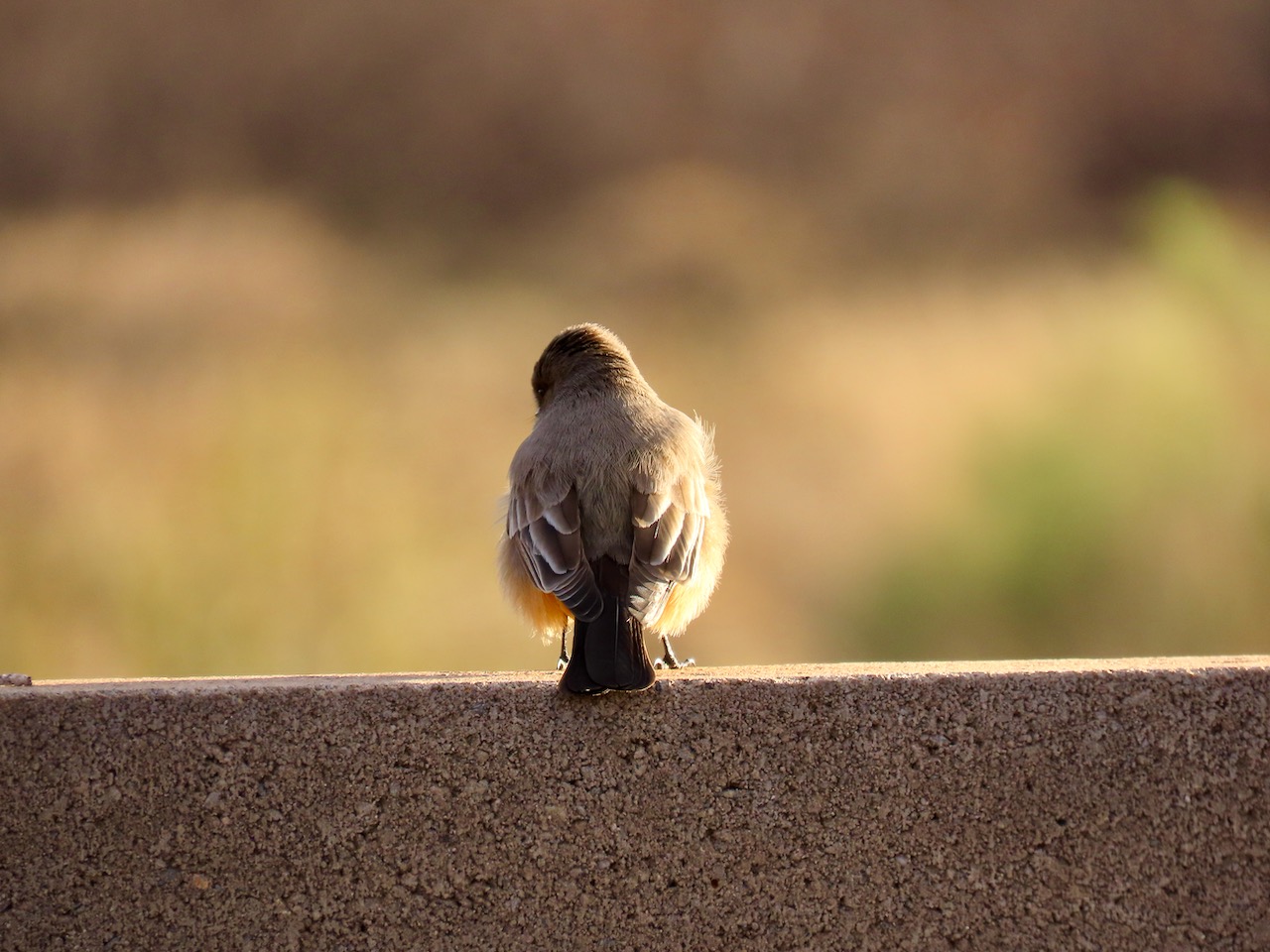 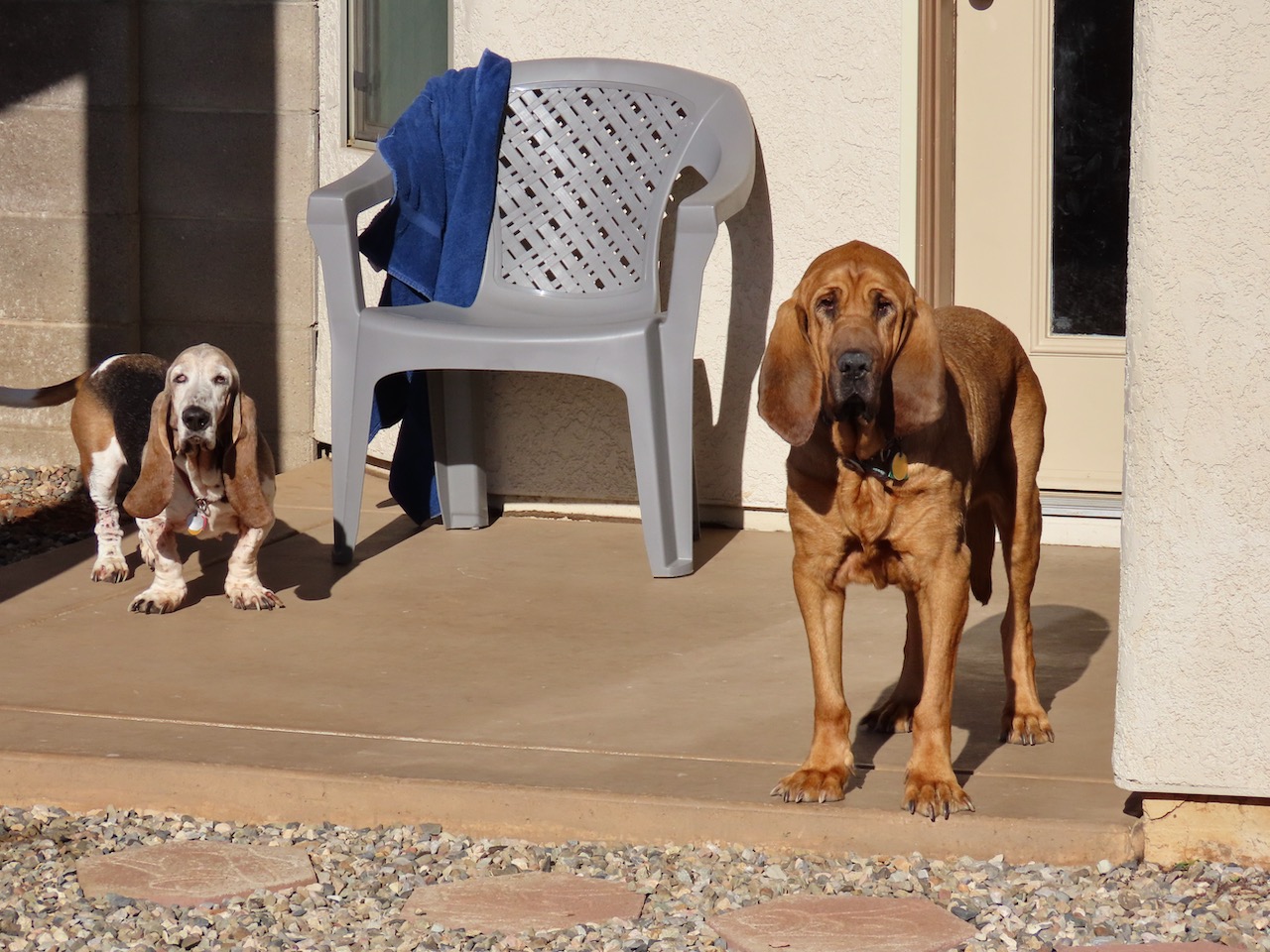 Although the snow is gone, Heidi, Stella and I are dreaming for a day like this. Taken just a few days ago we all know it's possible to have some bright hot sunshine even when the temps are in the 50's. After all they are officially Arizona hounds and they LOVE sunshine. 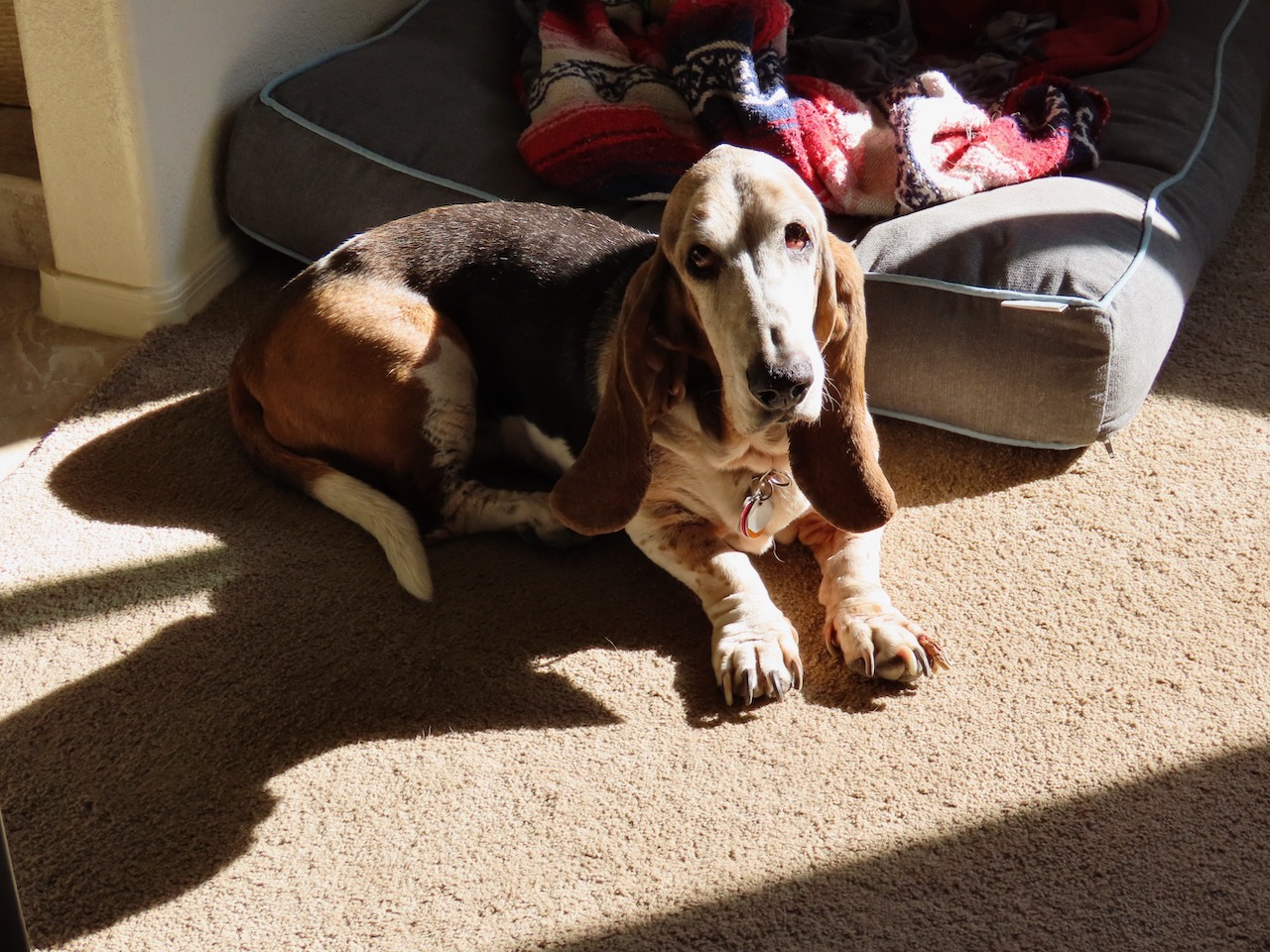 If Heidi cannot get a good warm place outside to sleep in the sunshine after breakfast she will always find a warm sunny spot in her bedroom. She has a vet appointment tomorrow for an annual checkup, annual shots and hopefully a nail trim by one of the vet techs.

After getting serious about it, it was not really hard to connect my tv for the first time to my wifi. I could then access Amazon Prime Videos and found more free movies to watch than I had ever found on Cox Cable On Demand. I added a ton of them to my 'watch later list'. With my Best Buy award points that I had built up I only paid $29 for the 6Gb Apple Tv. I have that hooked up and am in the process of connecting it to some sports channels. Once I get that accomplished and see that I can watching the ballgames I want ... Cox TV will be canceled but I will keep their outstanding internet service.

Hard to believe we are just a few days away from 2020 (sounds weird) but that means we are also closer to warmer weather.