Is That Frost On My Car Windshield ??? 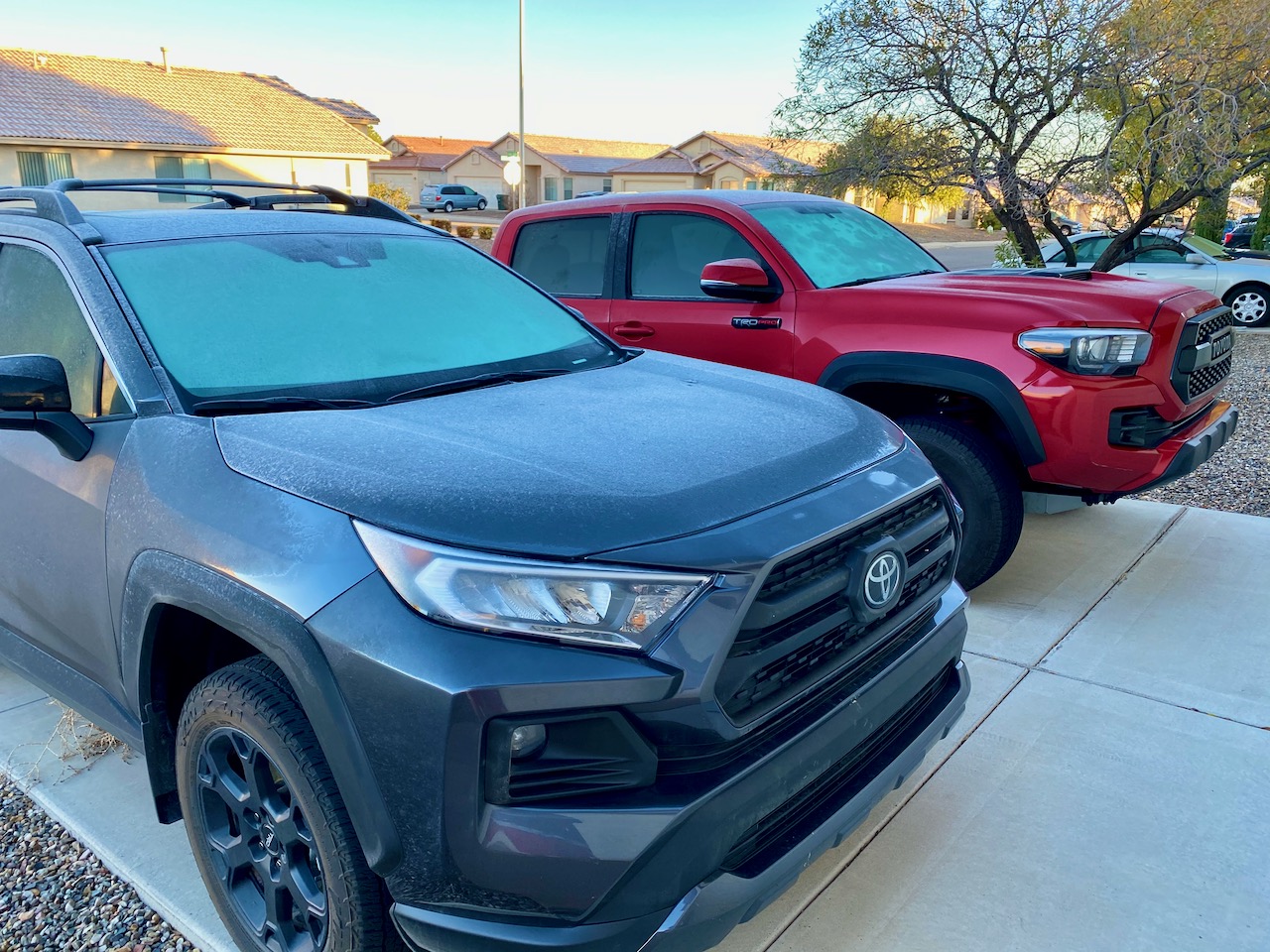 I researched the winter weather here, before I decided to move to Southeastern Arizona. I plugged in small towns from New Mexico to Arizona. I didn't want to live in Yuma, Phoenix or southern Texas. I did not care that it would drop into the 30's while I was sleeping if the sun would warm the day up to the 50's in the months of December, January and February. So I chose to live where I do because there was just too many positive things to pass up. Yet it was a little surprising to glance out the window this morning and seeing frost on my car windshield as I opened the vertical blinds that Stella loves. I guess I should have kept those ice scrapers I threw away last May before I left Indiana.

I am going to start posting late afternoon or early evening Arizona time again ... kind of wraps of the day with photos and commentary. I like that better than spreading days over different posts. 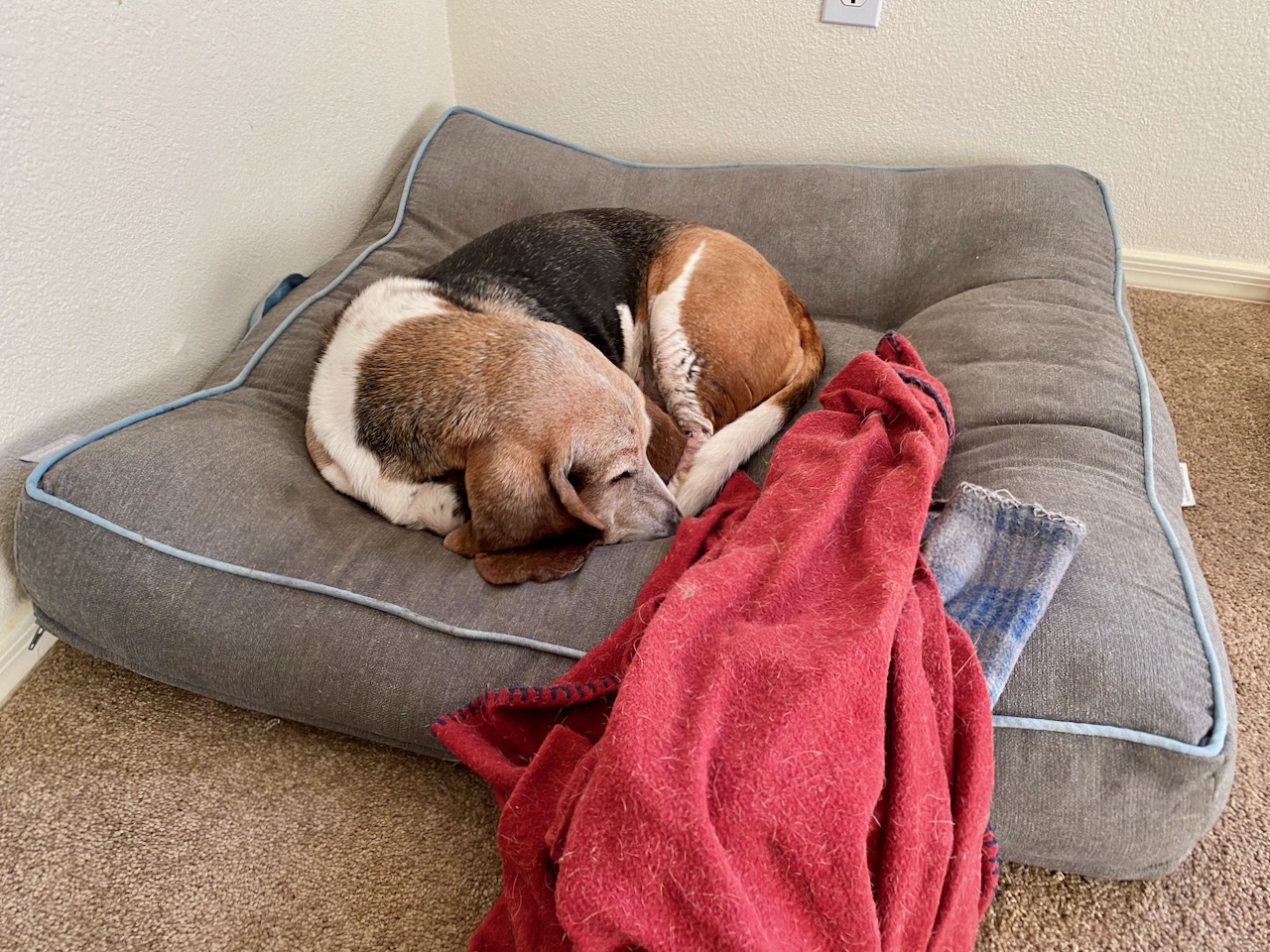 It doesn't bother the hounds one way or another. They have the same routine 1,710 miles away. Get up, go outside, eat breakfast and then get back to sleep as soon as possible. Based on the tossed blankets and REI small camping pillow, which is out of the photo, Heidi must have gotten too hot last night and kicked everything to the side off of her bed. 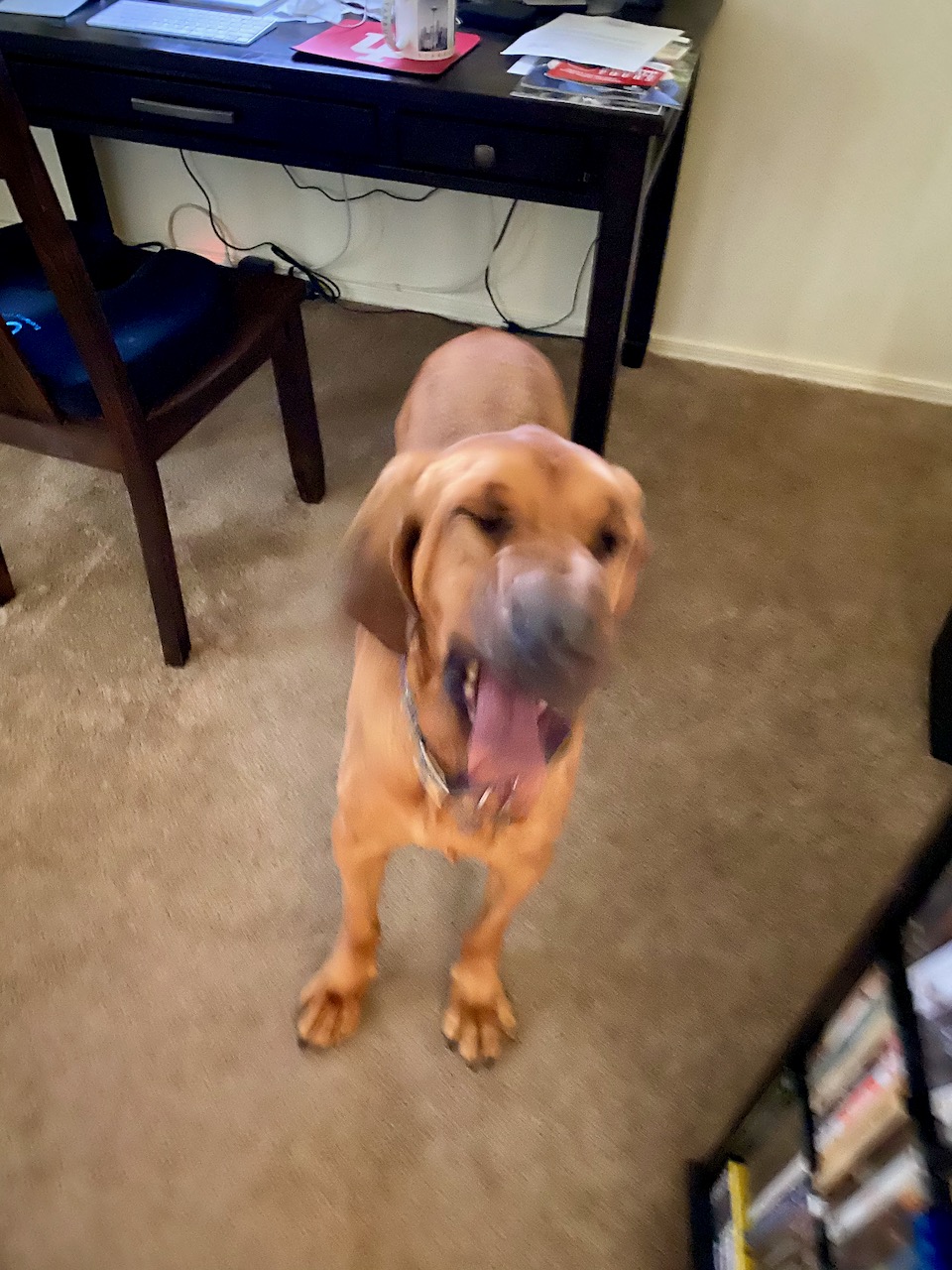 Stella was sound to sleep when I left the computer room for my second cup of coffee. She must have heard me unlock the front door to step outside to take that photo of the car and truck windows. She doesn't like to miss food or walks and can hear both in a deep sleep. I wonder sometimes if she would like to put me on a leash so she can stay near me all the time. She never sleeps too far away from me after four years and three months of rescuing her. 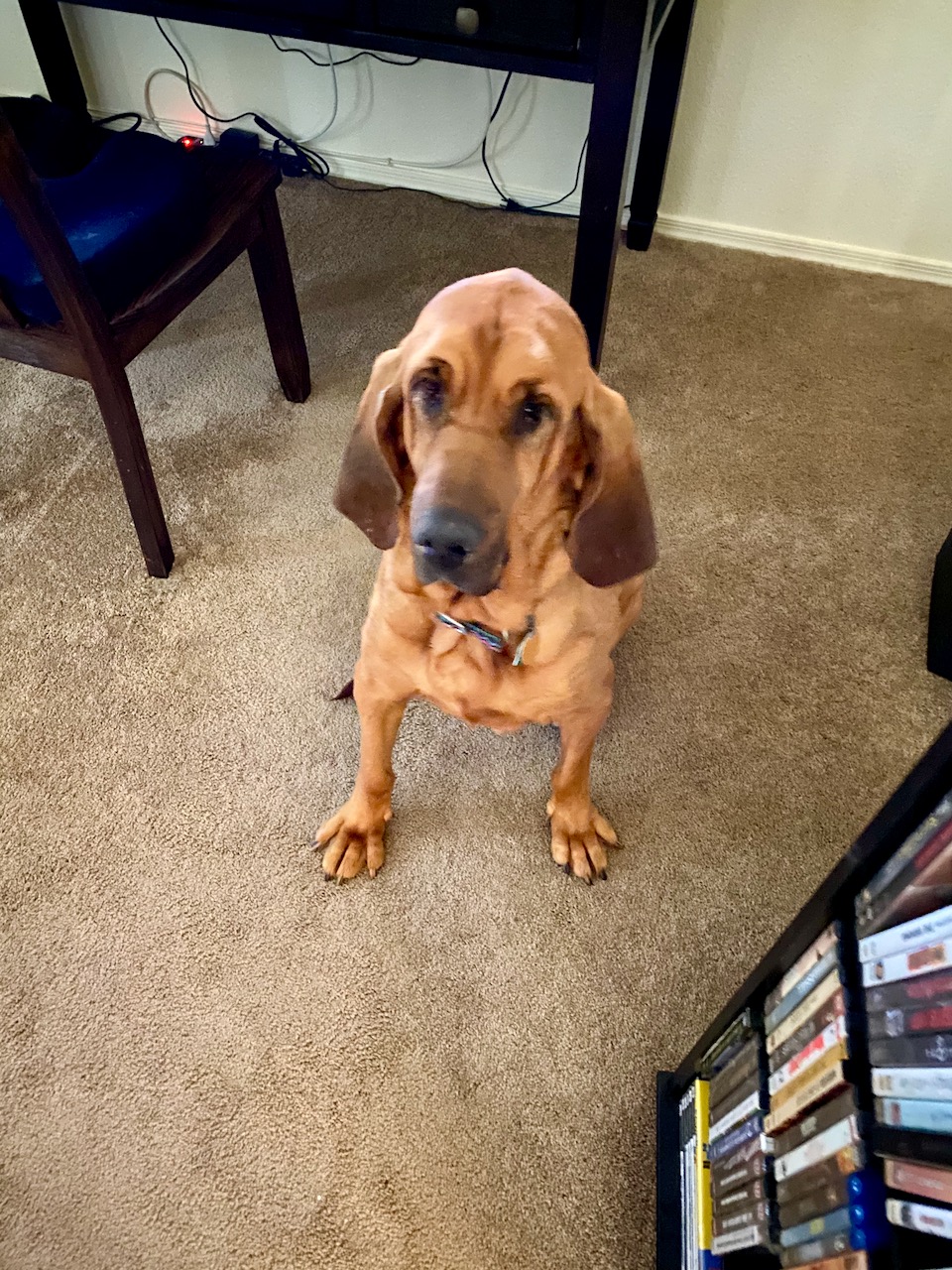 We are going for her walk this morning, the temperature will not matter since it's not as drastic as winter temps in Indiana were, plus the sunshine is bright this morning. I like morning walks more than afternoon walks, less traffic, less distractions for her and Heidi. 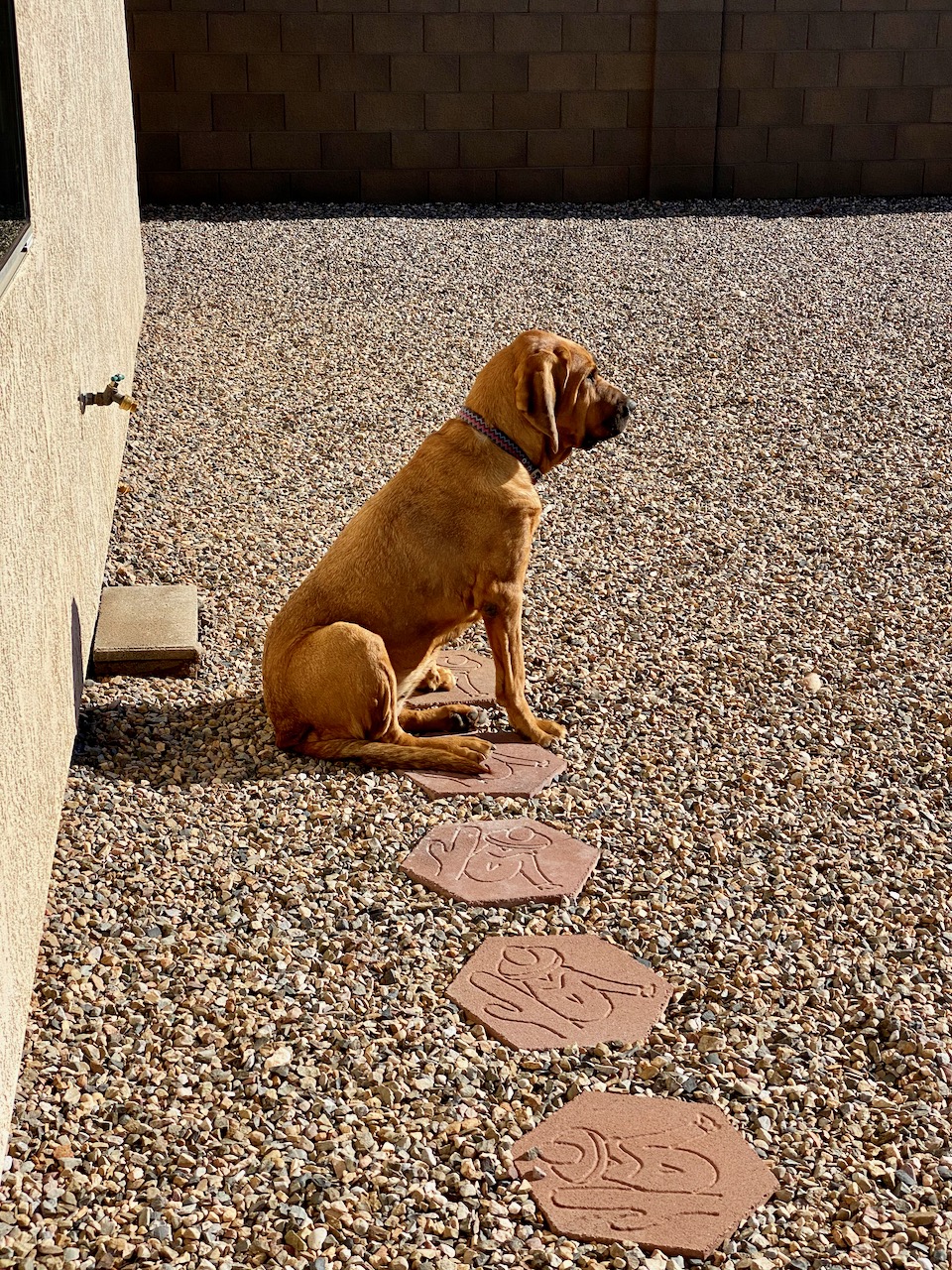 While I was getting ready to watch my day of college football, Stella decided to soak up some warm sunshine, which had not been around since last Tuesday morning. She evidently found the warmest part of the yard and wasn't going to move. She sat motionless for a long time before laying down. 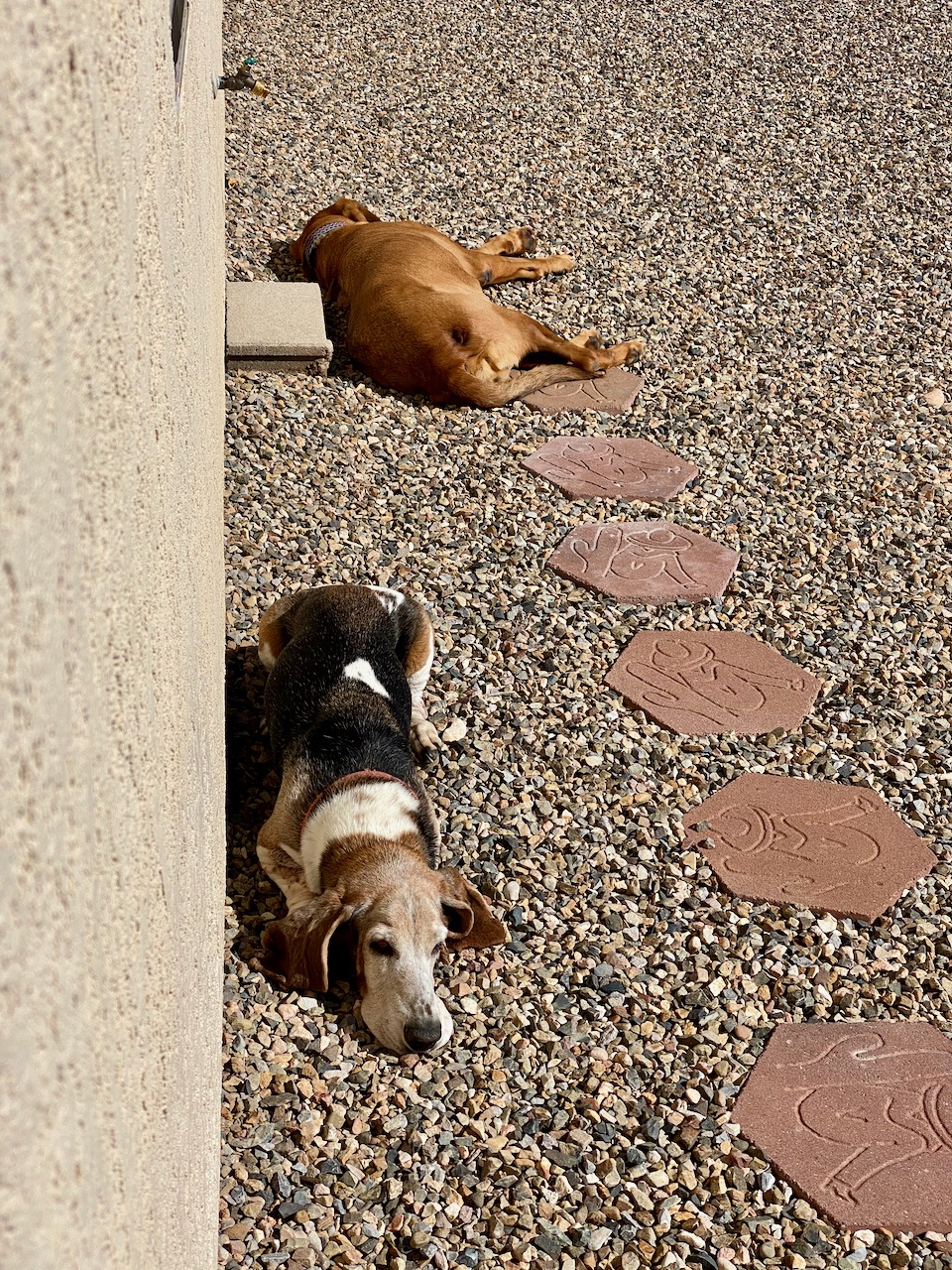 During one of the commercials of the game I didn't see Heidi or Stella anywhere inside. They were not on the patio soaking up the sunshine. Look where I found them. It was in the low 50's but at 4,300  feet elevation the sun is hot and it feels much warmer than the temperature. This is the temperature range I found on climate data for a winter day. I can live with that. 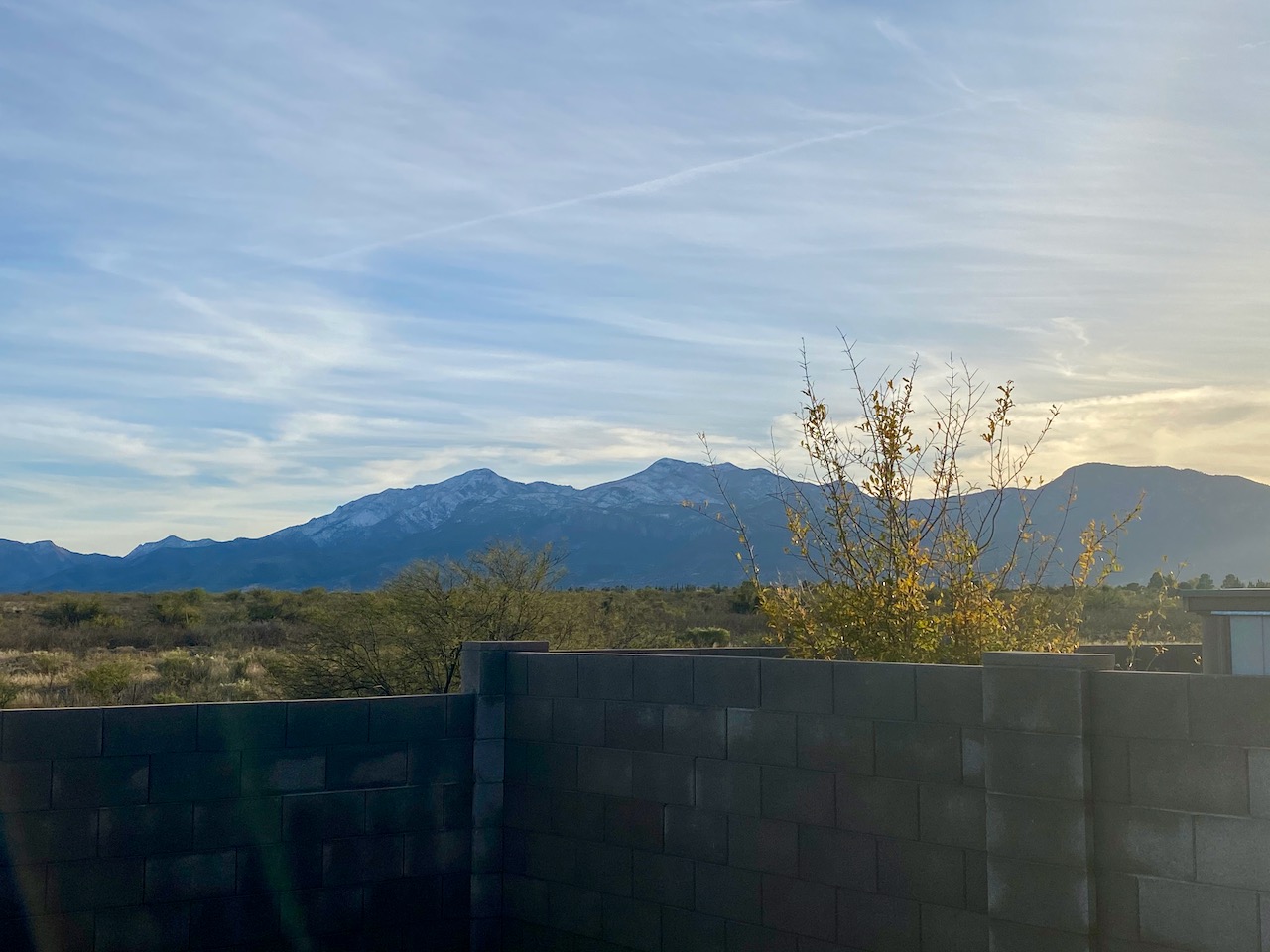 After my team blew a 24-10 lead, something I have seen too many times over my lifetime, I was swearing to my friends online that if they end up losing this game "that is it, I'll never watch another ... ever". Well I grew up watching Indiana football and basketball. My dad was a coach and graduated from Indiana U, as I did and my younger brother. So I am use to terrible football records and blown games. But damn ... heading for one of the best seasons in Indiana football history ... then blowing this game would put me over the edge of insanity.  When it was 38-38 starting the 2nd overtime I came so close of turning the game off.

My friend in Chicago, also an IU alumnus, texted she was leaving the tv on with the sound turned off in the other room that she could not watch anymore. "If they win ... I'll go in rewind and watch the game, IF they lose I'll delete what was taped."

IU beat their hated rival 44-41 for their 8th win ... for the only the 8th time in 130 years of playing football, winning that many games. They have only won 9 games in a season TWICE in 130 years. Maybe now you can understand my intensity, when "it's just a game Steve". 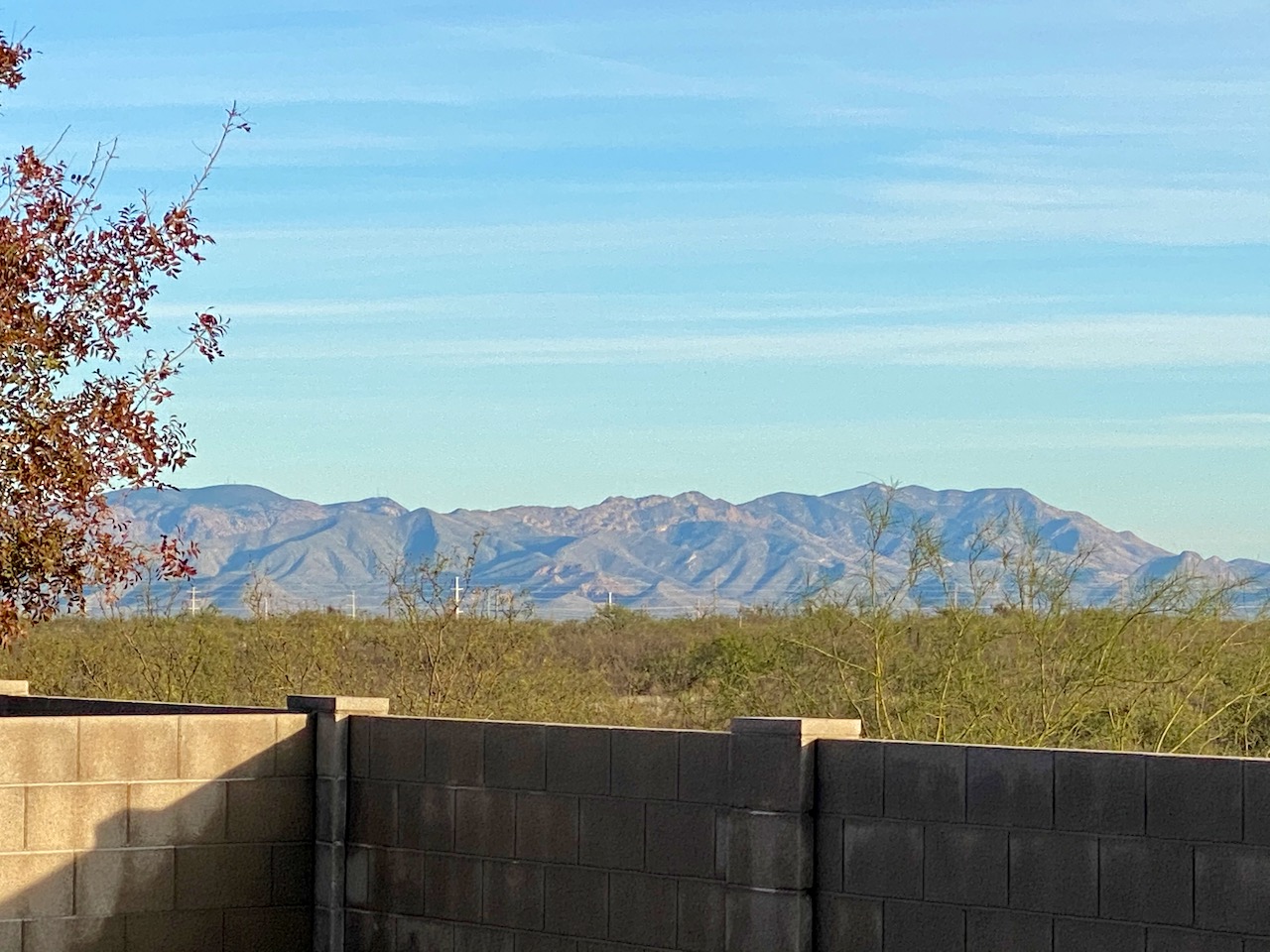 After the game, I planted that ugly patio chair of mine out in the center of my backyard facing the sunshine and still able to see the mountains, smoking my 'victory cigar' ... it could be my last. Not because they may never win again ... I just don't like smoking that much, plus cigars are not healthy. 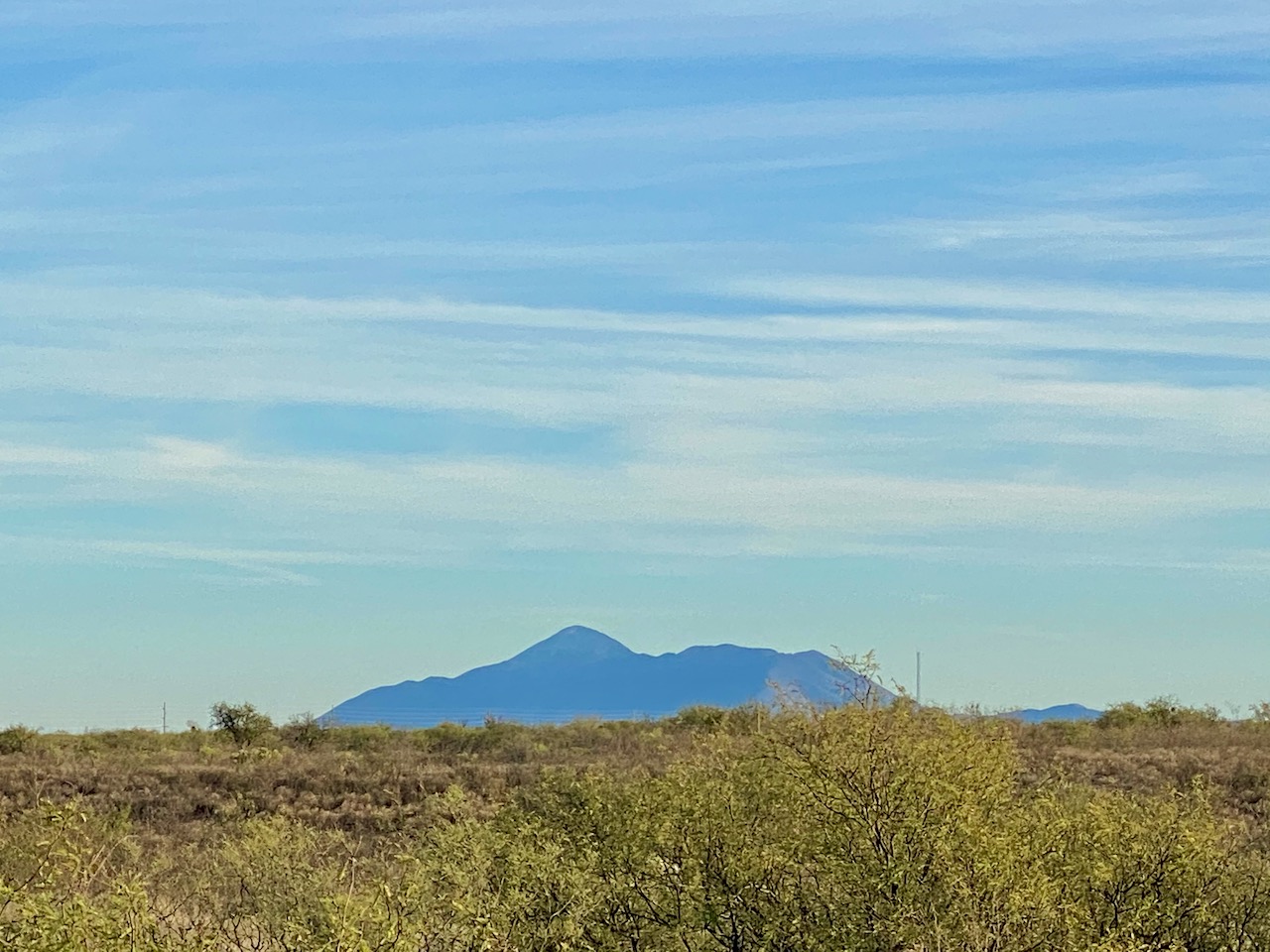 I didn't have my phone with me to take a photo but Stella was passed out on the patio, hanging over the side of it, sleeping in the sunshine. She had a rough day moving from place to place inside and outside to find the perfect place to nap. 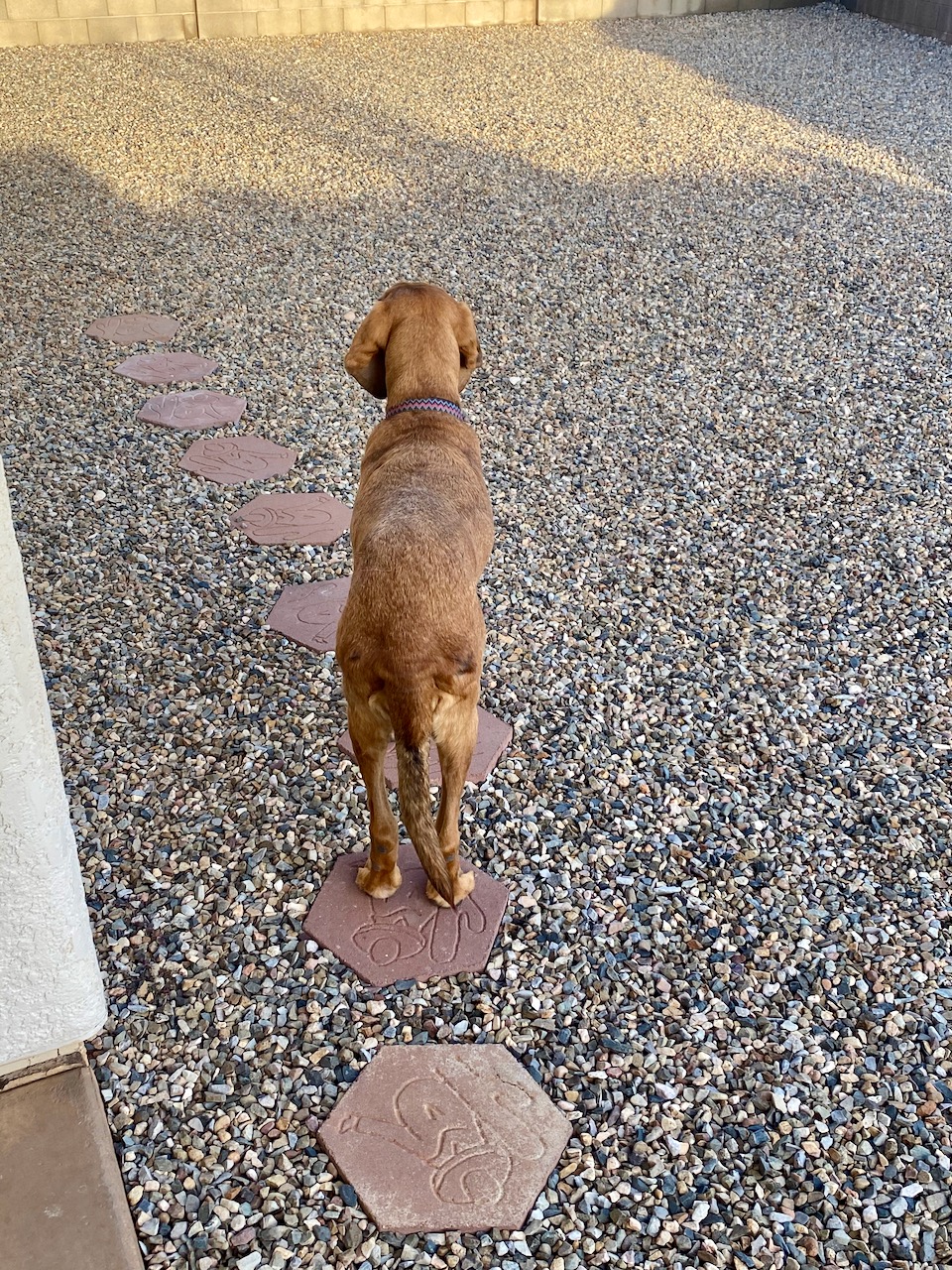 Remember when I said that food could wake her up from a deep sleep. Well she was smelling steaks on a grill. Not our grill. Not her grill. The neighbor's grill. But to her or any bloodhound based on the "Bloodhound Property Laws" ... that is her steak, not theirs. Once she found out that she was not eating steak on a Saturday afternoon to celebrate the IU victory ... she headed inside JUST IN TIME .... to see the Papa Johns Pizza delivery man at the door. How lucky could she get. 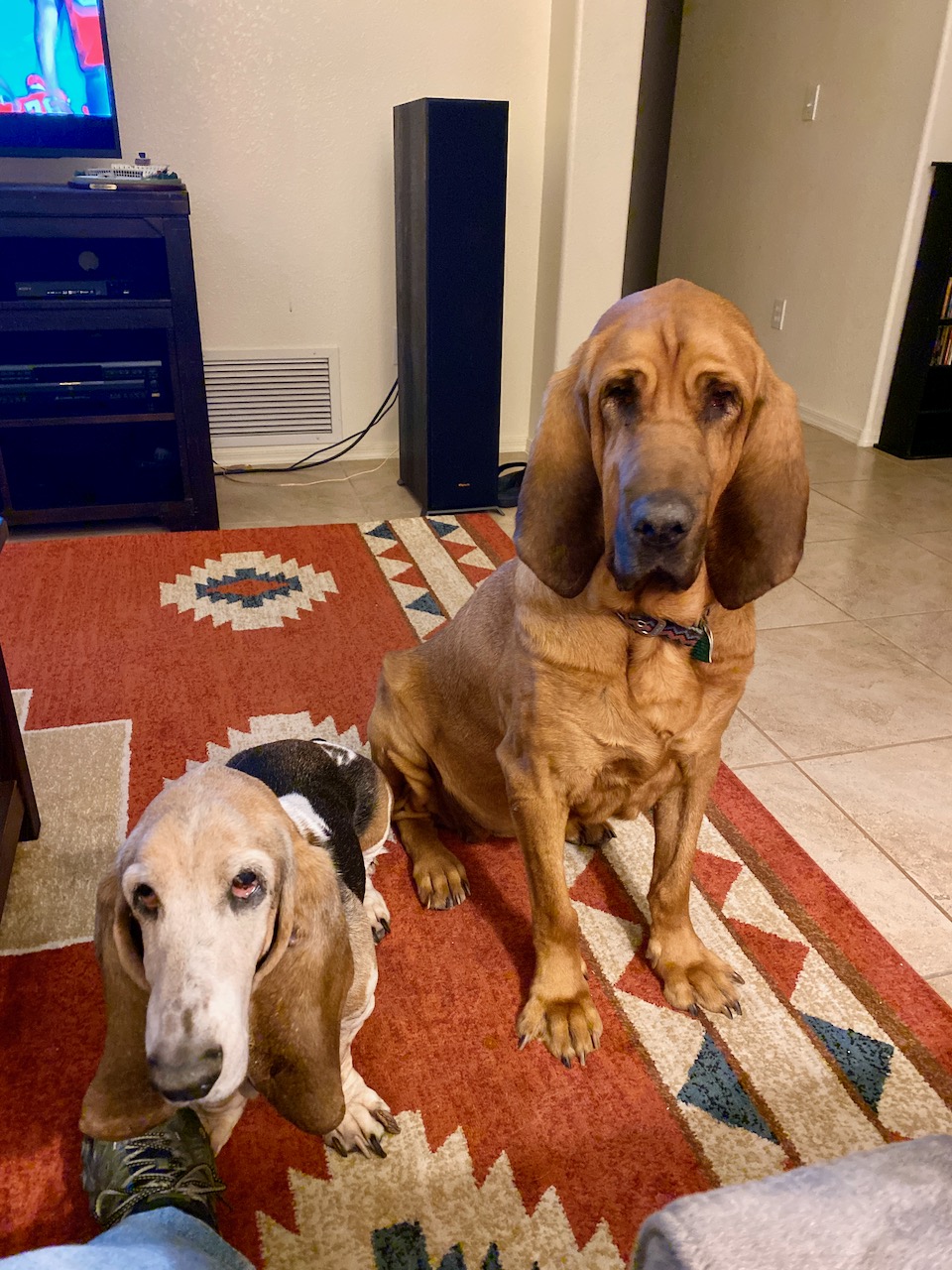 She and Heidi took their normal portions whenever I am eating something while sitting on the couch, which usually involves watching a football, baseball or basketball game. They don't move an inch, they don't blink their eyes ... they are focused on nothing else but getting a piece of the pizza crust or a plain breadstick. Just one piece will not be enough either and I'm not sure they even taste it since it disappears so fast in their mouths. Let's just say they had a good snack. 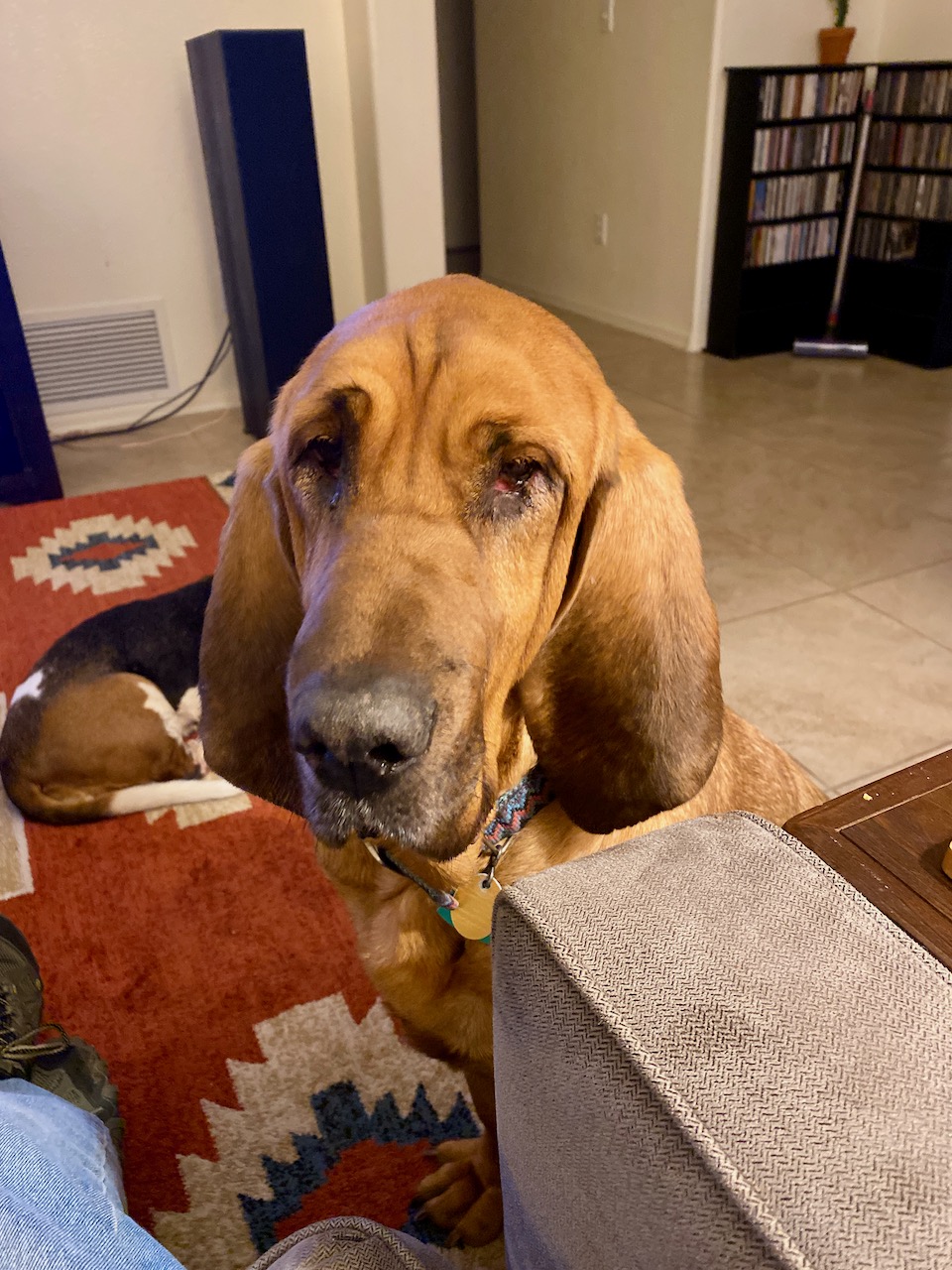 Just because I had nothing else on my plate did not mean that Stella was finished begging. She always tries to get closer to the action if she thinks she can sway me into giving her one more piece of whatever she has been sharing with me. She will also sit there for a long time, not blinking ... once she figures out the snack is over and nothing else is going to be served ... she pouts with her head lowered. 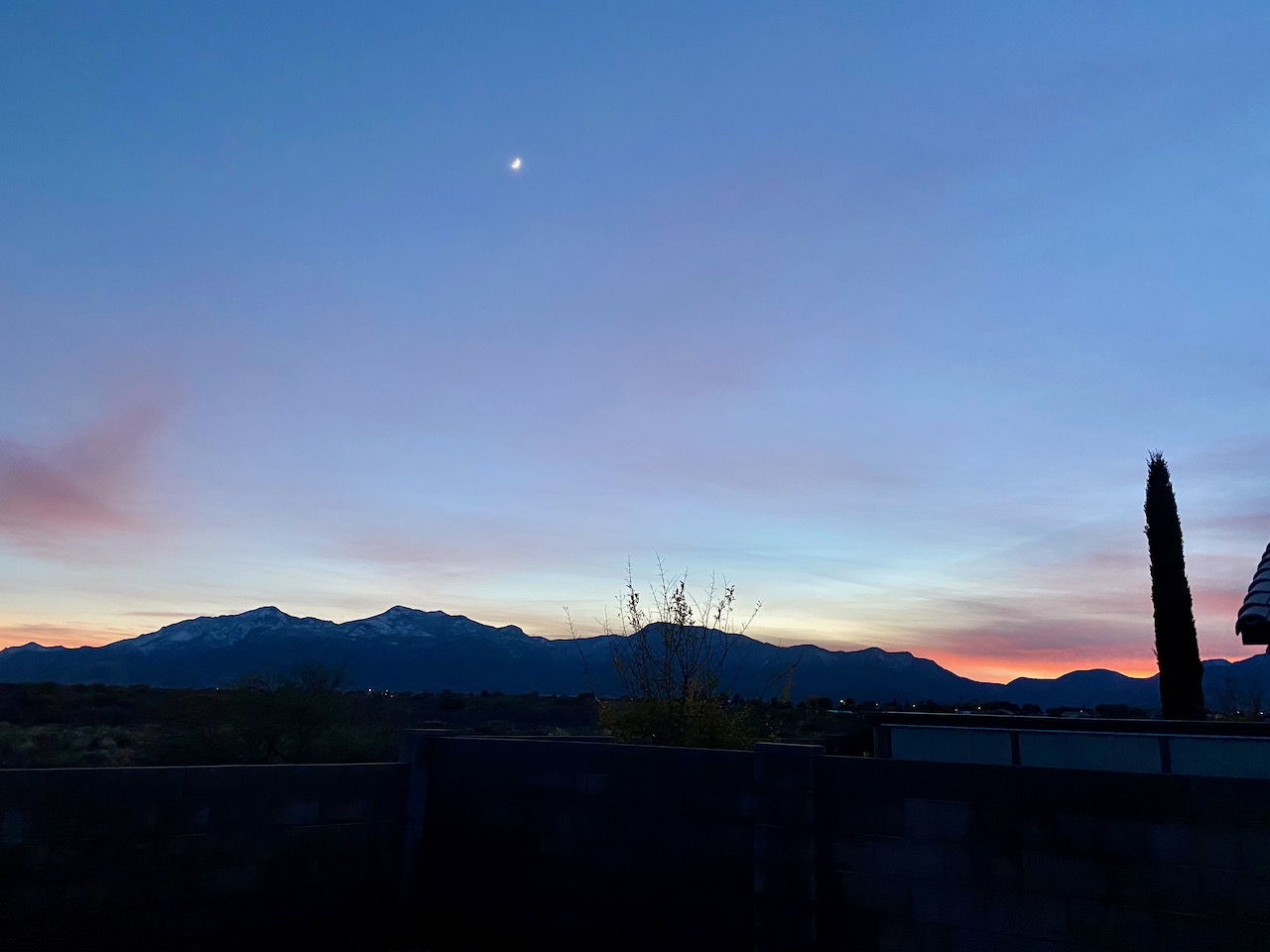 Commercial time or halftimes of football games are always a nice time to head outside and see what the sky is doing. In this case I just barely caught the sunset. 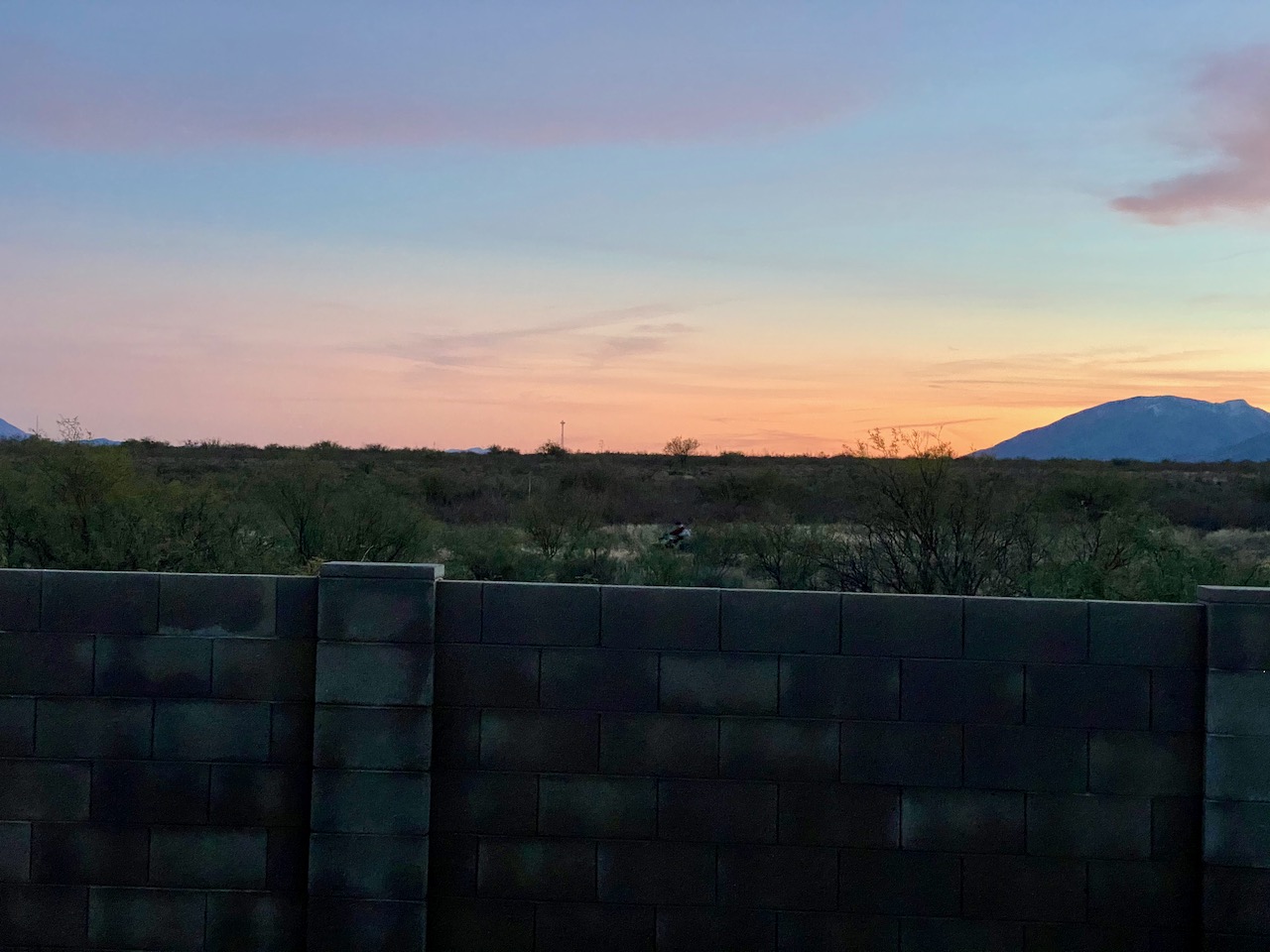 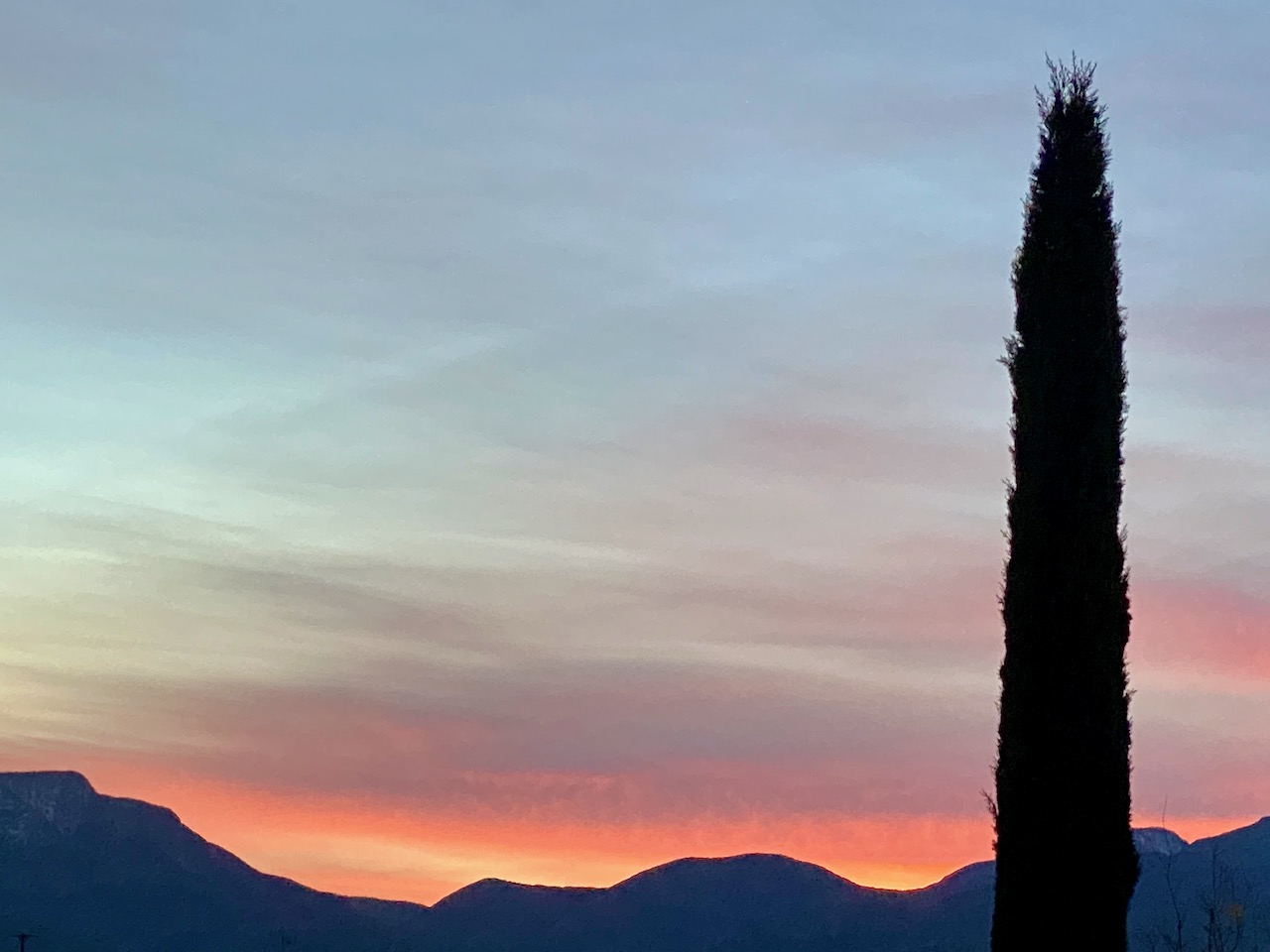 Just in case some readers may not know that use a phone or table to read the blog ... at the bottom of your screen you will see a link called "web version" .. if you click that link you will see the normal website as you would on a computer which includes the sidebars. There you can see other bloggers listed or the blog archive for posts all the way back to 2011. I also added some old favorite blogs I followed in the past back on the sidebar. Take a look, maybe one that you followed is back there on the list.

I am not a coffee expert. I always thought it was the water, filtered or tap, that made the difference in how the coffee taste. Some friends reminded me it wasn't that at all, it was the coffee maker that makes the difference. How could it ... there is hot water being poured over grounds then into your pot no matter if it is a Mr. Coffee, a Bunn or a Cuisenart coffee maker. Well after almost 20 years using a Bunn, two different makers, I found out the maker does make a difference in taste ... a big difference. 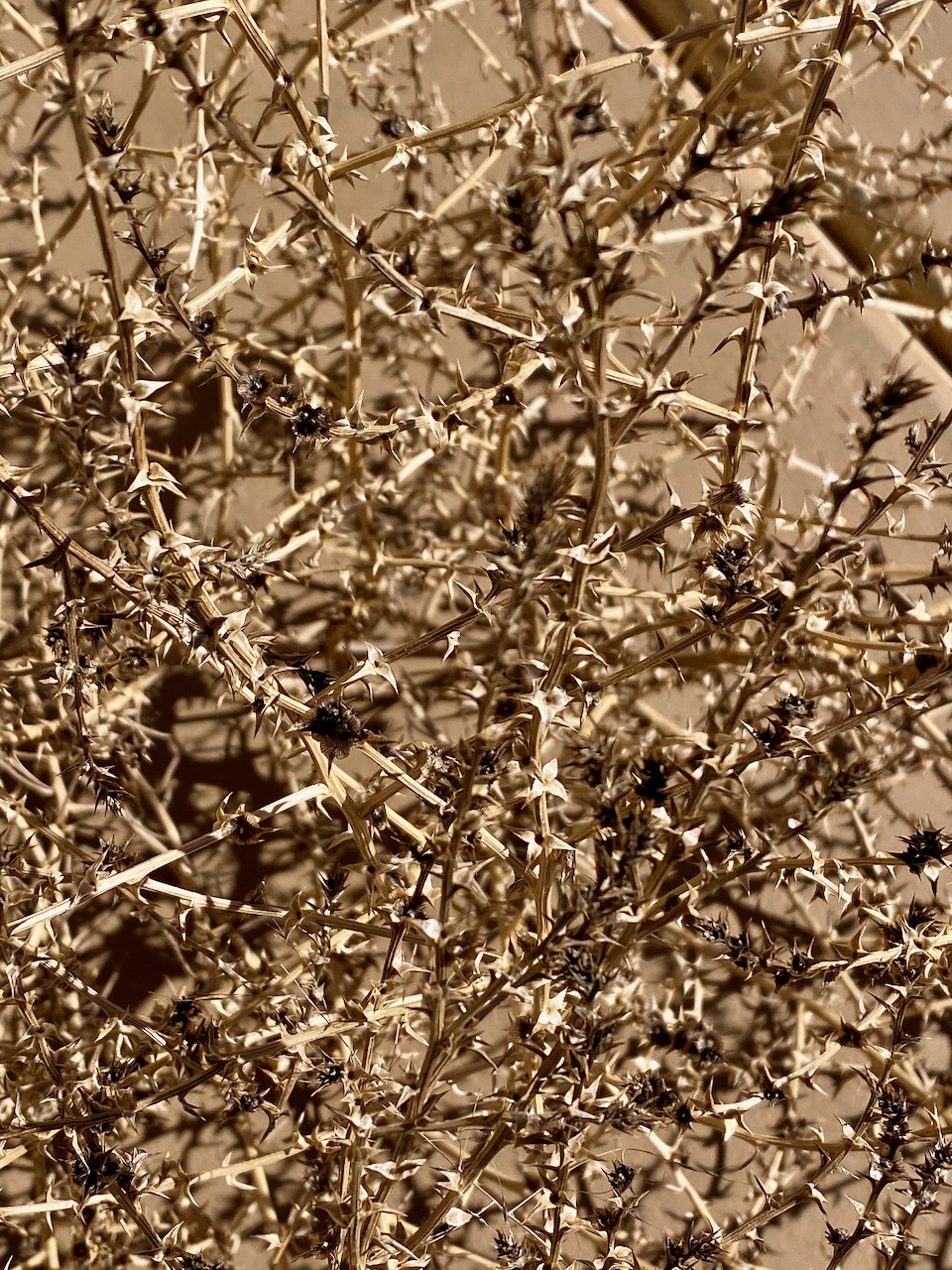 I tried the cheap route and bought a Mr Coffee. I returned it after two days of use. I hauled the leaking old Bunn coffee maker out of the garage trash to hold me over until Amazon shipped the Cuisinart maker I bought. After the FIRST CUP of coffee made by the Cuisnart I found out my friends were right ... the coffee machine makes a difference in the taste of coffee. One of my best purchases even if I only drink two cups per day. 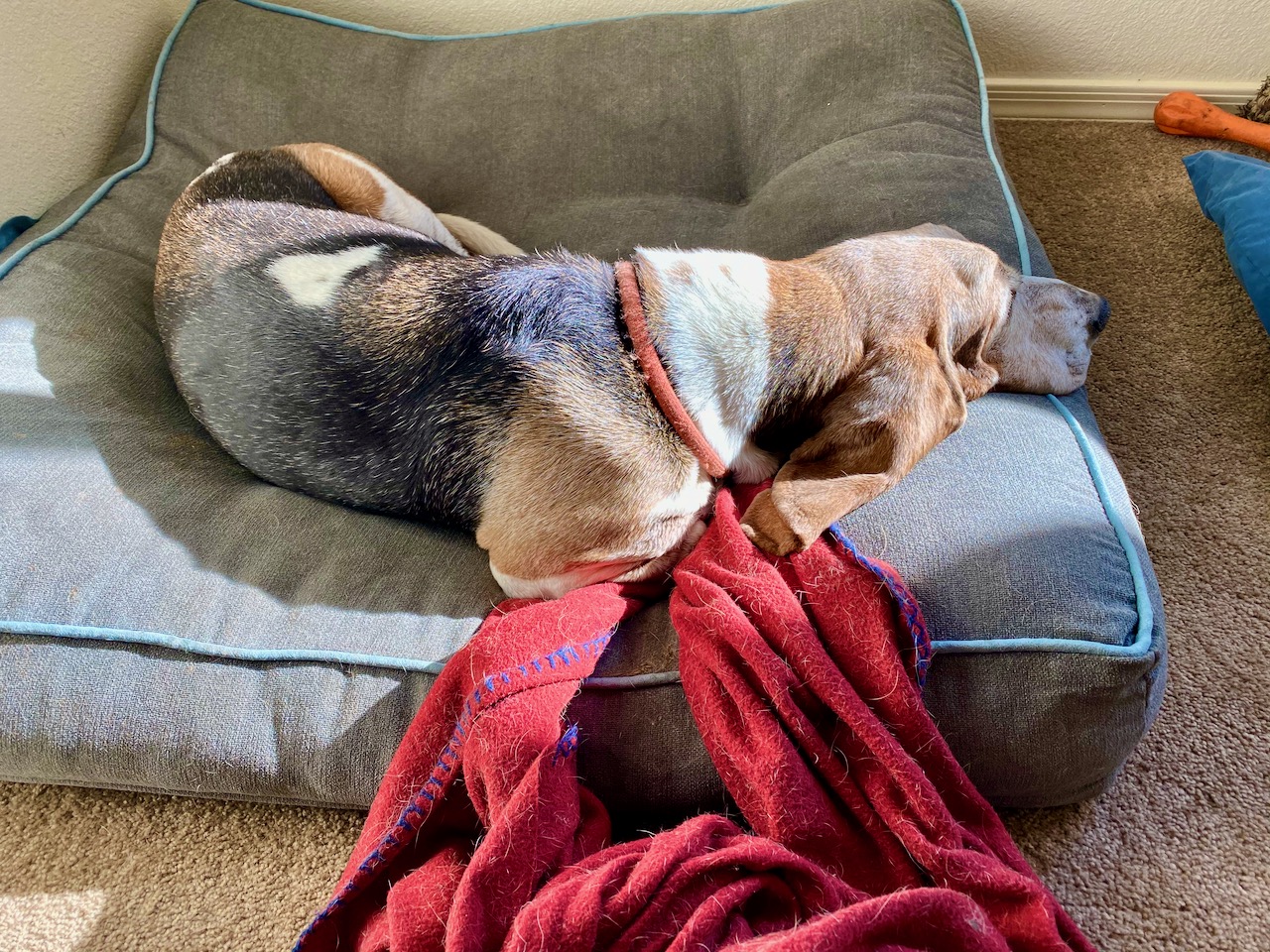 I like riding my bike in the morning, right after getting back from Stella's walk. That was the summer routine up to the point of my crash. By the time I was back to riding after my surgery, the temperatures had cooled enough in the mornings where I didn't want to ride until the afternoons so the temps were above 50°. So I am in a little bit of conflict ... if I wait for warmer temps in the afternoon, by that time I have found something else I want to do besides ride a bicycle. 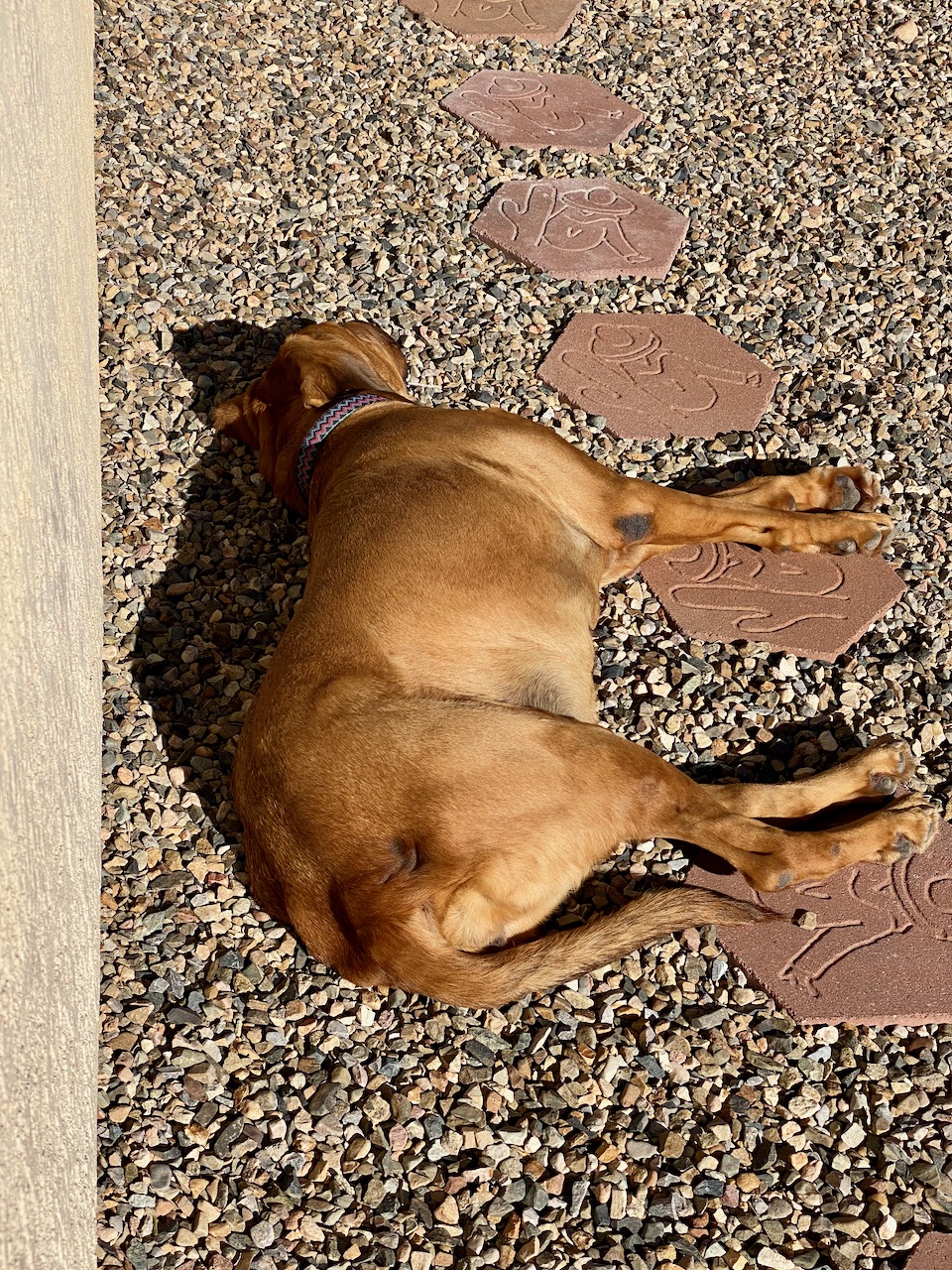 If I ride in the morning like I want, I am going to have to wear cycling clothes, which I have, to combat the temps in the 30's and 40s, depending how early I ride. I find that riding that early in the morning kinda sets the day up for me. I feel better whenever I ride, mentally and physically. Then I have all day to do what I need to do whether it be errands, hanging out with the hounds, reading books or possible roadtrip ... there is not that interruption in the day to change into cycling clothing and riding for an hour or two. In the mornings it does not feel like I am interrupting anything ... just getting a start on the new day. 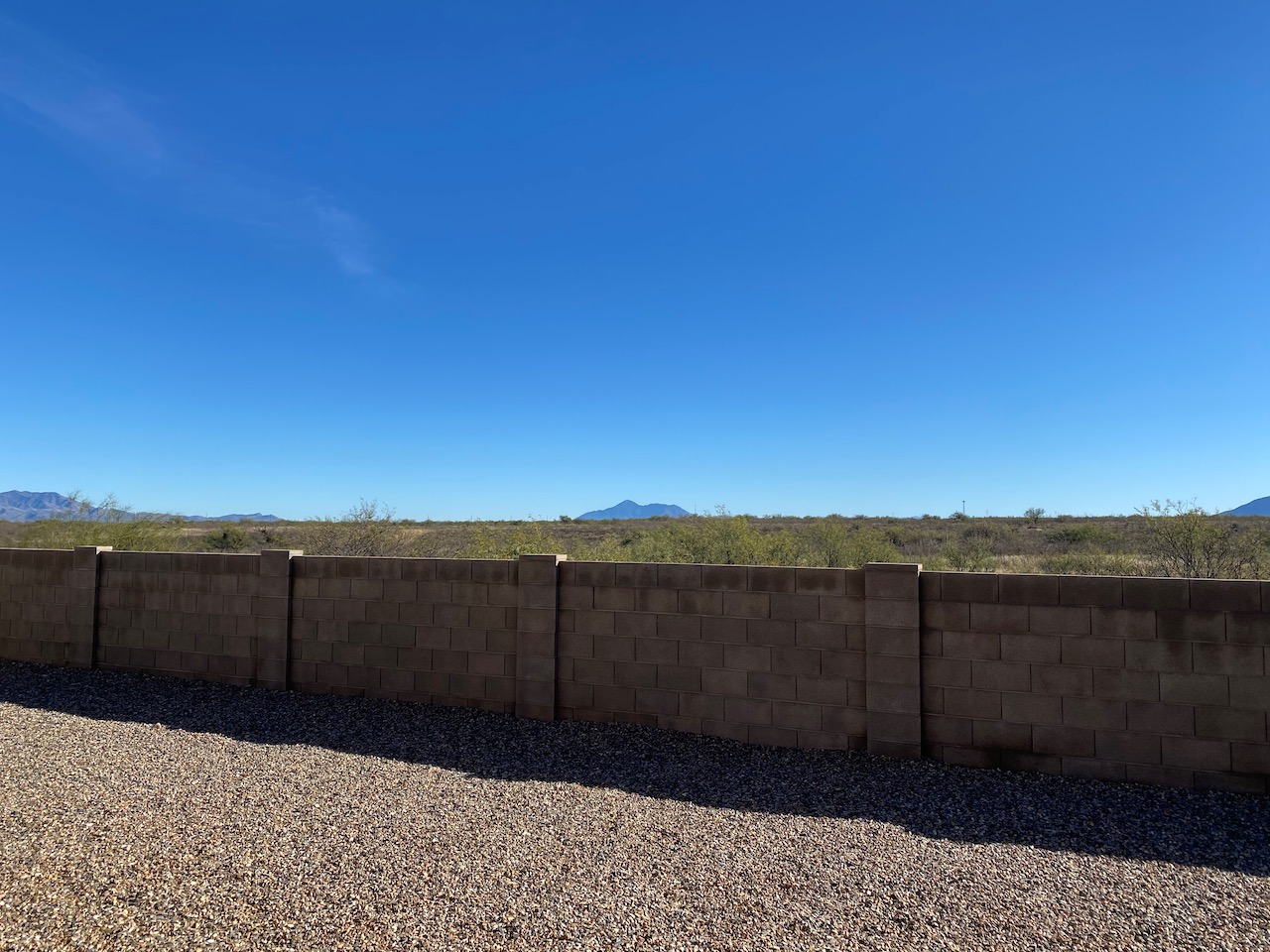 I ended up not riding. By the time the afternoon rolled around to where I planned to ride I was on a different project. Cup of coffee in hand, two sleeping hounds in the sunshine, I parked my chair on the edge of the patio and enjoyed the day. 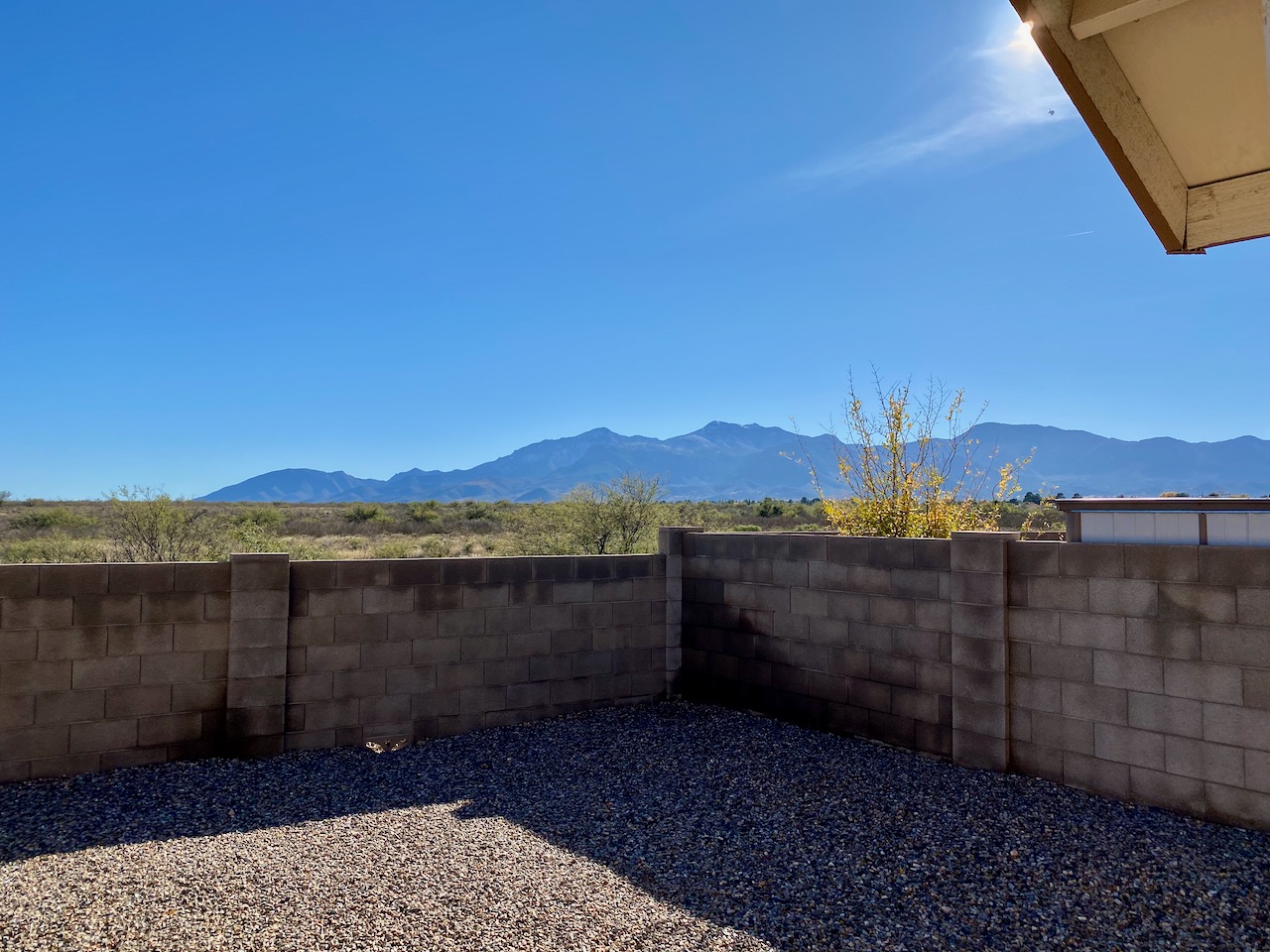 It was a nice relaxing day today, where we didn't do much as you can see. In retirement sometimes you don't have to do anything to enjoy what you have.