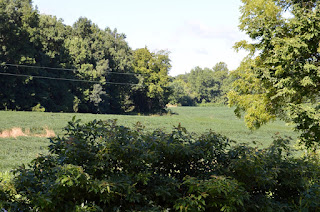 The tv weatherman had talked about it for over a week, all the way up to late last night. When the time came ... he was right.

That "cold front" that was due to pass through our area while we slept Saturday night did arrive and made the day so much more enjoyable than the "heat dome" from a few weeks ago.

Sadie did her normal routine this morning while I sat drinking my two cups of coffee. Stella didn't move out of the yard. She did a lot of sitting and contemplating what her day was going to be like. 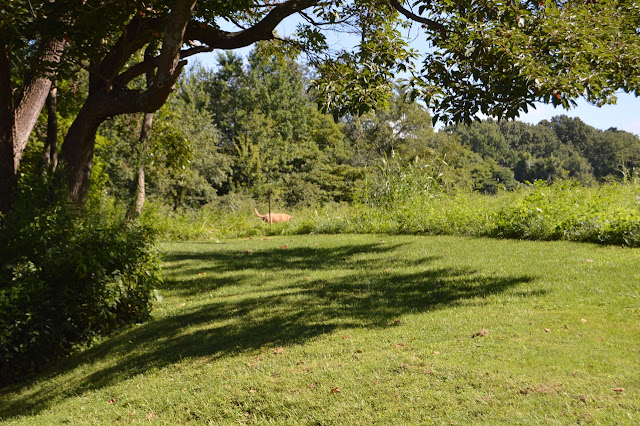 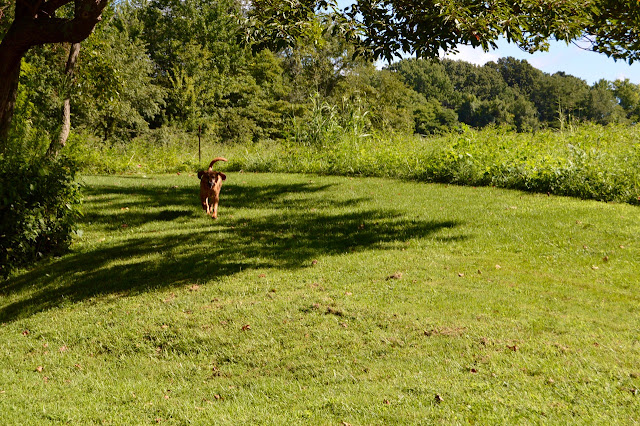 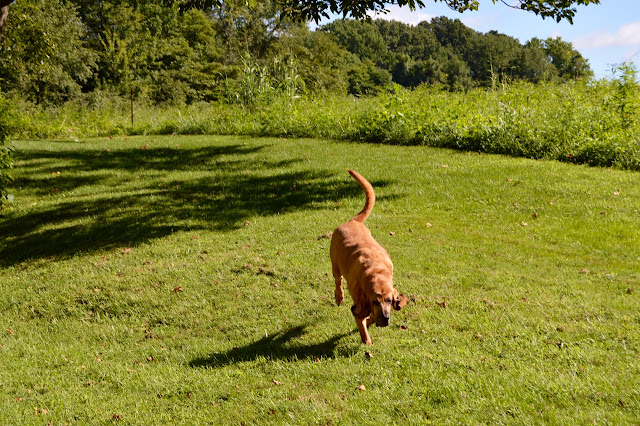 Stella deep in thought about her plans today. 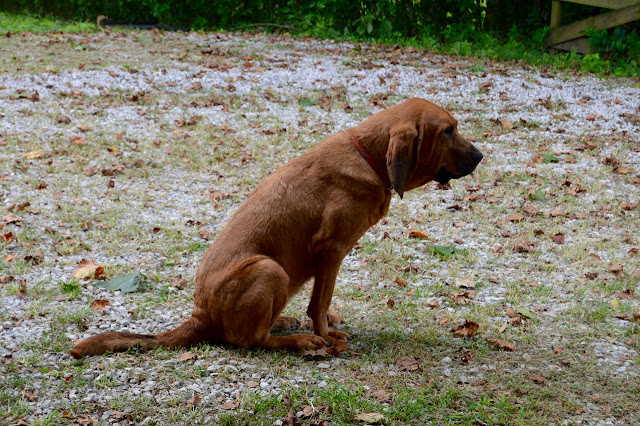 There was no humidity that you could feel. The old carport thermometer showed 78° for the first time in months. I thought it was stuck above 90° at one time. So it was time for the first of two walks today. 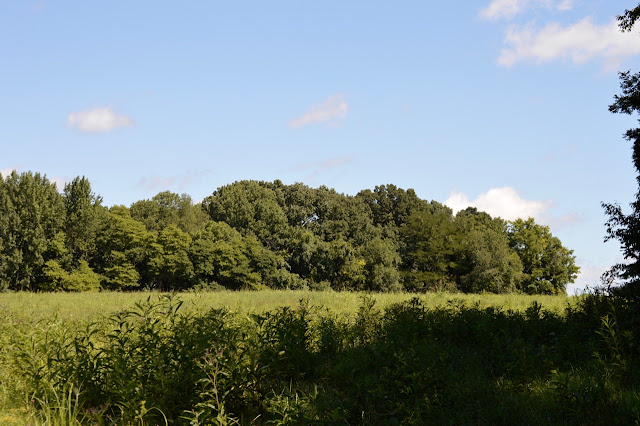 They both followed their own pace and path ... for some reason Stella did not run to the 'no fly' zone but stay near me on the return trip home. 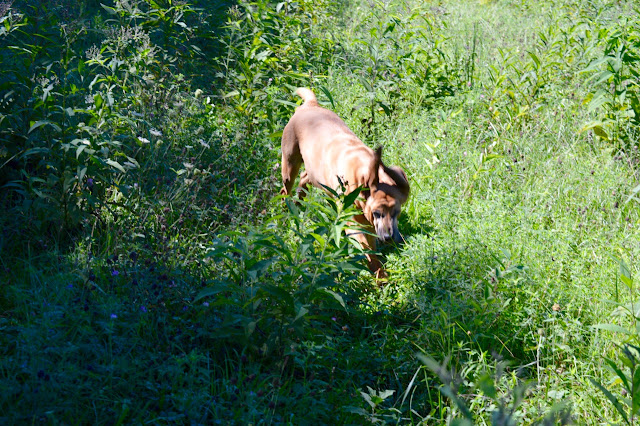 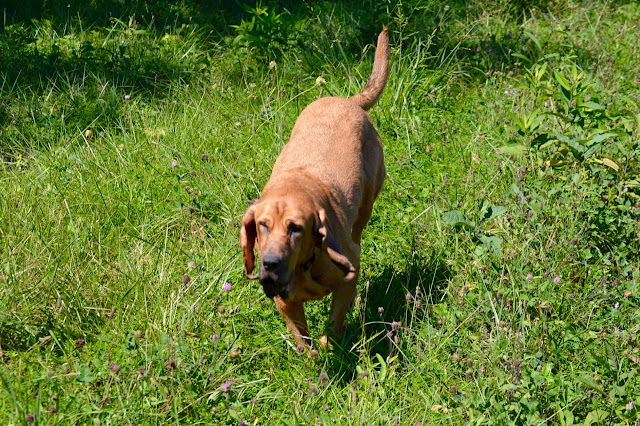 All that is left for the corn is to dry out and be ready for a fall harvest. It cannot grow any taller. 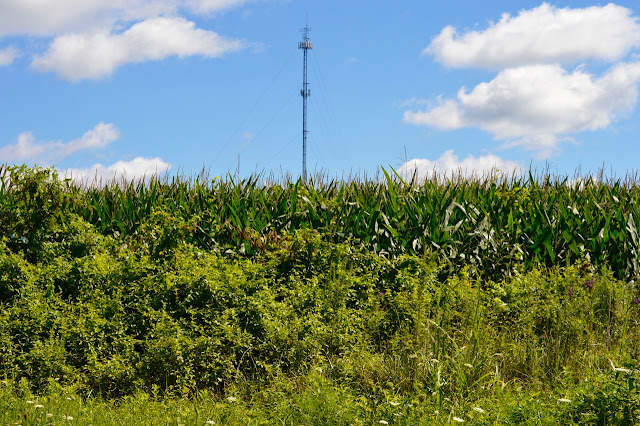 Stella letting me know she is in the area, not too far in front of me. 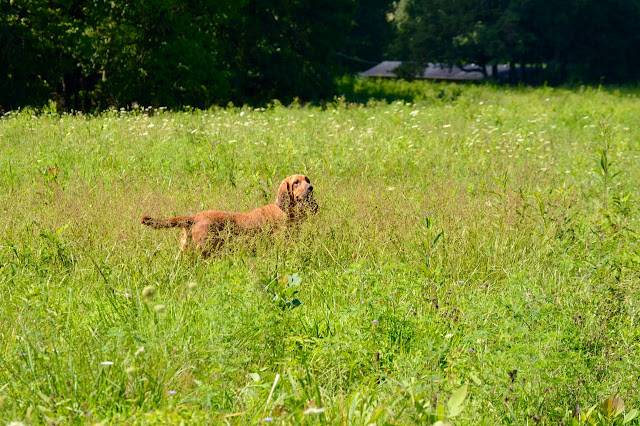 I tried to catch the 5 small butterflies in this photo but 2 of them flew away about the time I took the photo. 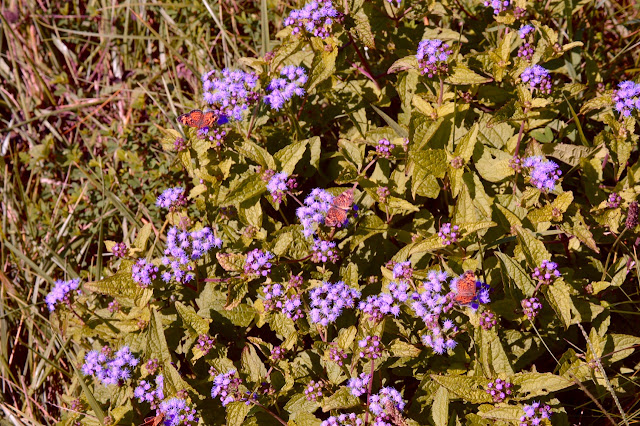 Even near noon, the shaded areas of the field were still quite wet. After a short session of using the weed eater until my 20V battery was out of power, the shoes had almost dried out. 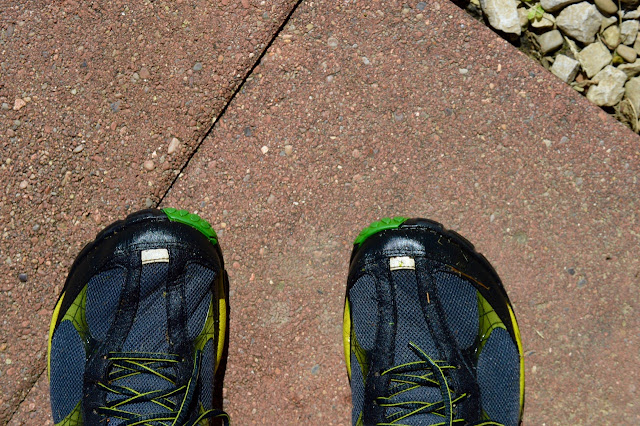 The longer the day went the better it got. The temps never did really increase to where it was noticeable while a nice strong breeze picked up blowing cool air most of the day.

I trimmed more weeds to ground level. I was able to see gravel again not only on the driveway but the area where I use to park my old Chevy pickup truck ... I regret selling the 1994, Chevy 2500 V-8 in May 2015. I trimmed quite a few weeds until the battery died. 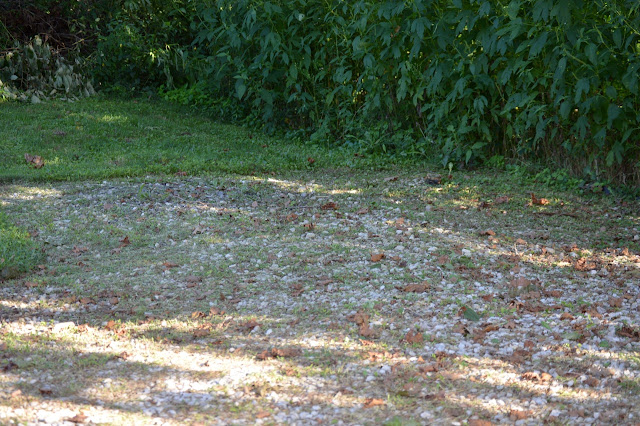 Later in the afternoon after it had recharged I took off down the bank but didn't quite make it all the way on the 20V battery. I think by tomorrow morning Ill have the complete driveway cut back. My fence is hidden and that's fine as long as those saplings don't grow tall enough to block my satellite dishes for tv and internet. 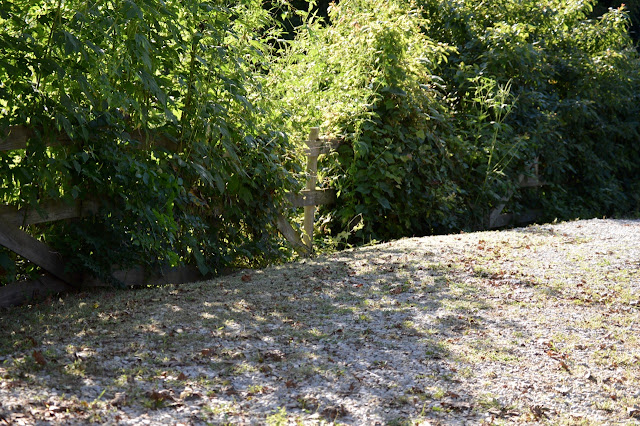 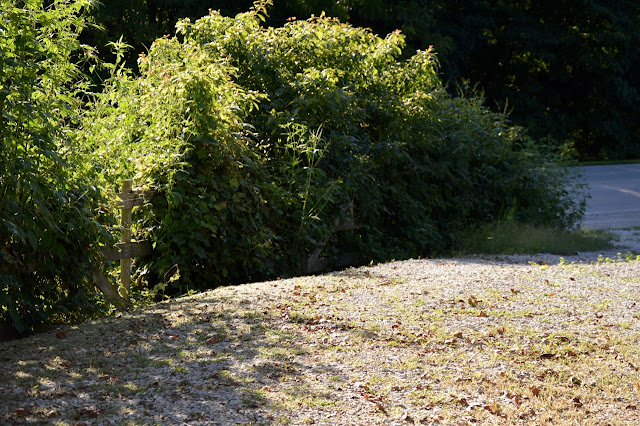 By cutting them as low as possible on the driveway, with some sunshine and hot weather they die out on their own. If you remember a few days ago the crab grass and weeds had practically taken over the top of the driveway. That same area where I hand pulled every weed last August.

This was taken last week when I could barely see the gravel due to the weed overgrowth. 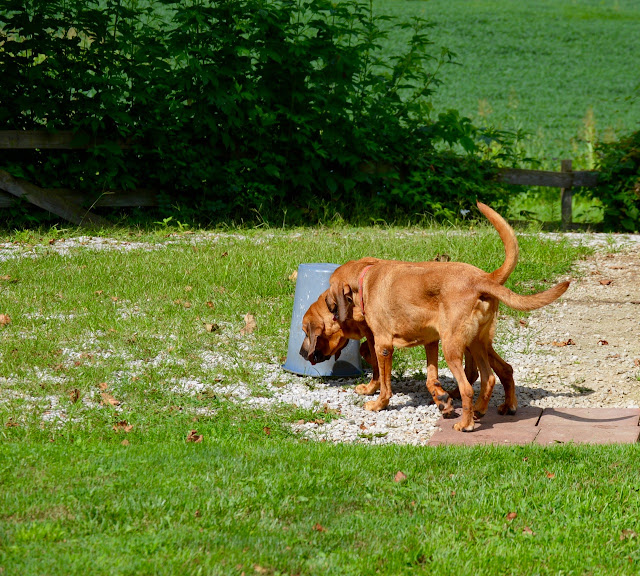 A little past 6:30pm Sadie decided it was time for another walk. She went from a deep sleep, jumped up and came to stare at me while I was finishing up a game of Mahjong. It seemed like in the 8 hours since our last walk this morning more leaves were changing color. 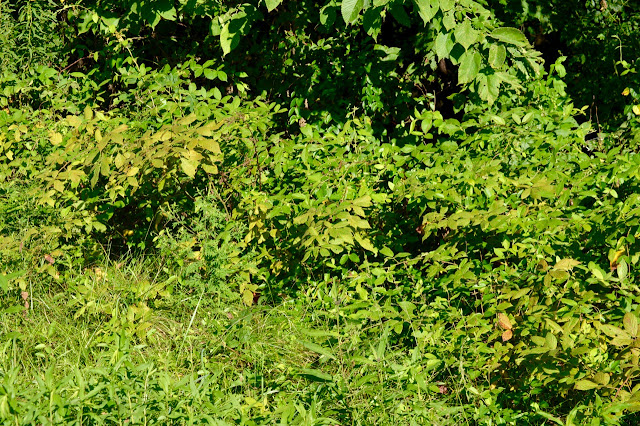 Stella was already in her mode of exploration. 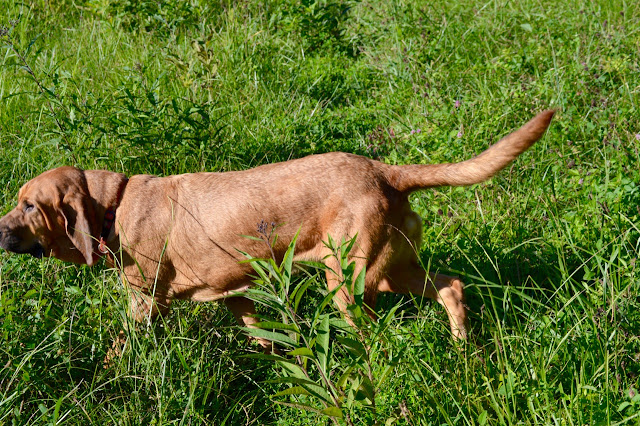 The skies were this blue all day and were still this way after 7pm. 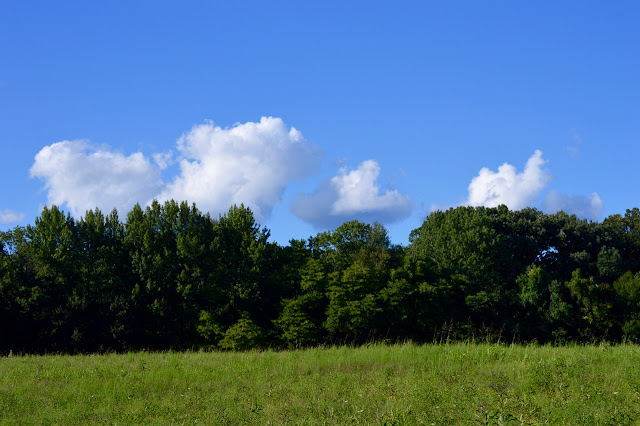 I don't think in the eight years that Sadie has been around, she has ever had a bad walk ... she loves them all. 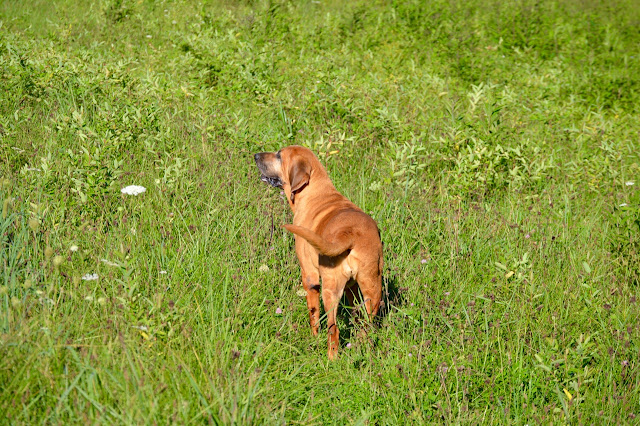 Stella held back for a while but with the cooler temps and no humidity, she was able to run ... that's her favorite thing to do ... is run. 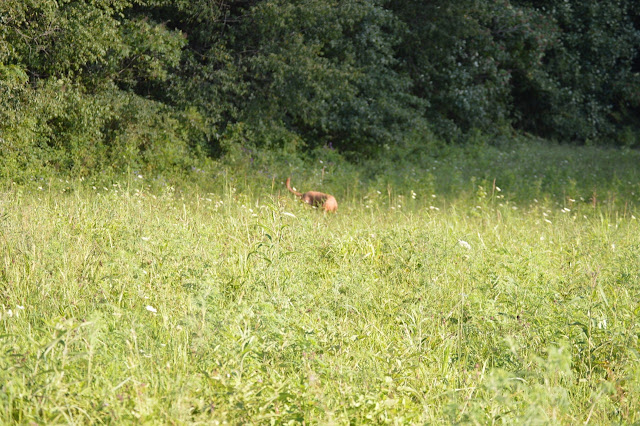 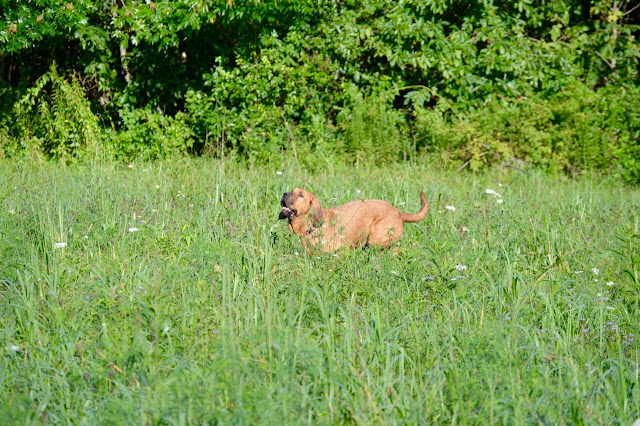 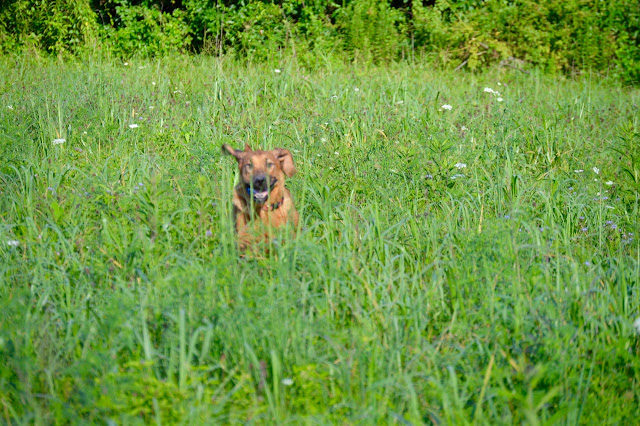 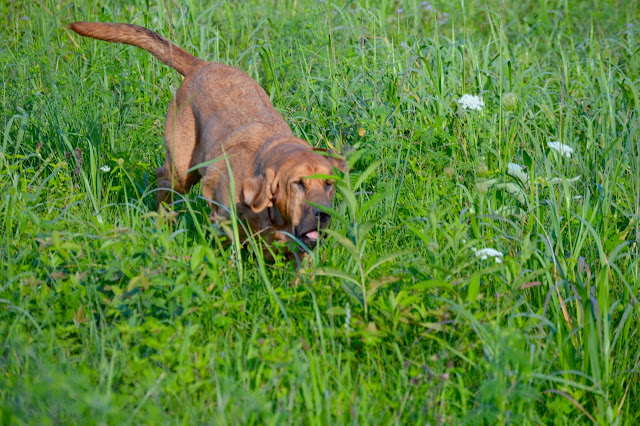 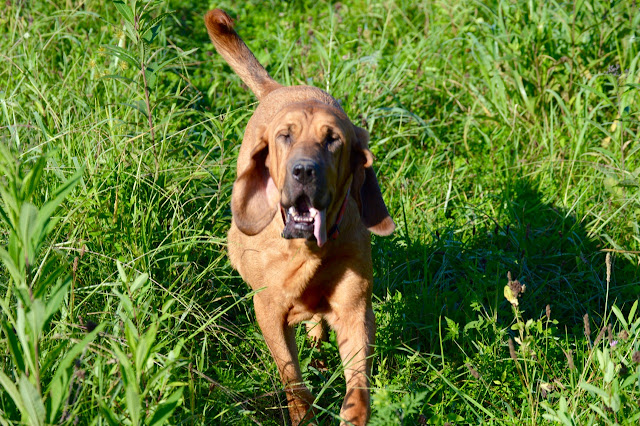 In the meantime Sadie was ready to get back home and led the way. 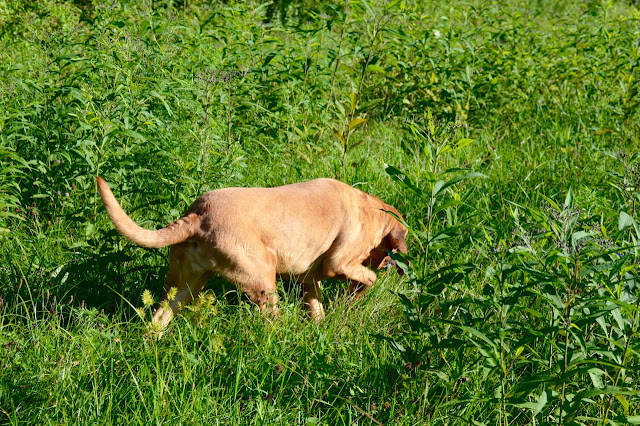 During the day all three hounds got their nails trimmed. I still have 7 to do on Sadie's back feet. She decided she had enough fun having 11 of them done and took off running before I could finish. Stella and Heidi sniffed the clippers when I held them to their nose, laid on their back and let me trim away.

Later on all of us piled into the FJ, rolled the windows down and went for a short drive. Nothing to take photographs of, just enjoying the cool air and the scenery. Both bloodhounds laid in the back and slept most of the way while Heidi sat in the front seat looking out the window.

For those that don't check the blog until you get an email notice that I have posted a new blog post ... that notice is taking about 18 +/- a couple hours AFTER I make the post. I signed up for that email like you did months ago so I could see if it worked and how long it took to get the notice.

This is the weather I like the best here in 'the tropics' of Southern Indiana.
at August 21, 2016