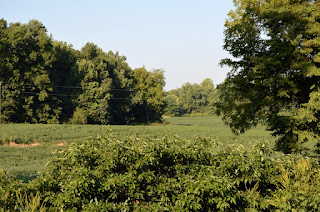 It was a year ago today, that I got up early on a Sunday morning with close to 4 hour drive ahead of me.

I had canceled the trip the week before because I had changed my mind about having a 4th hound and 2 large bloodhounds.

By the following Friday I was emailing Stephanie to see if Stella (Dipstick) was still available. You can read about our trip and see the photos of Stella the first afternoon she arrived on the post I did last year:  Stella's Arrival

A year later I am just as happy with my decision to bring her home as I was last August. She has had some separation anxiety issues to work through but seems to be getting better. She HAS tore up things, all that could be repaired or a replacement bought. Still, she is a great bloodhound.

This is the first photo that was sent to me when I asked about her after seeing the ad on a Facebook Group for bloodhounds. 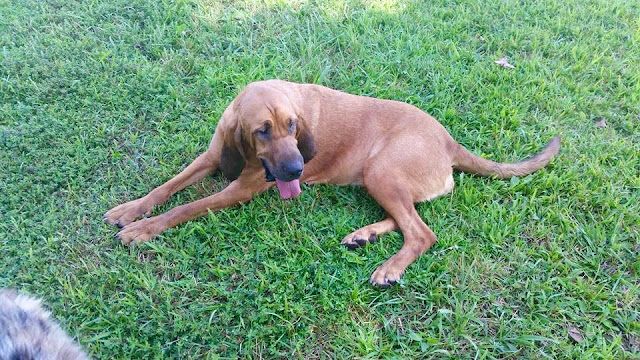 Here are some photos of Stella that I did not have when I picked her up. I didn't have these until this past spring where I found them on the Facebook account of the previous owner. She had some high energy and fast dogs that kept her busy. 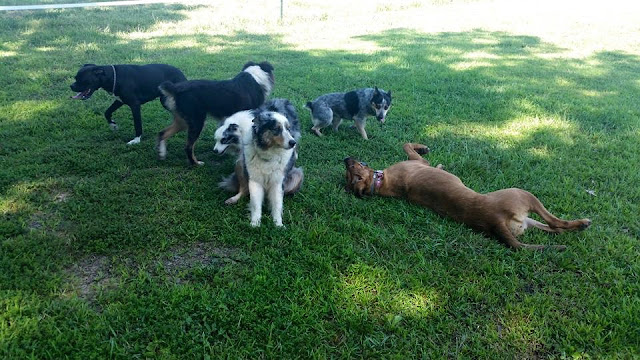 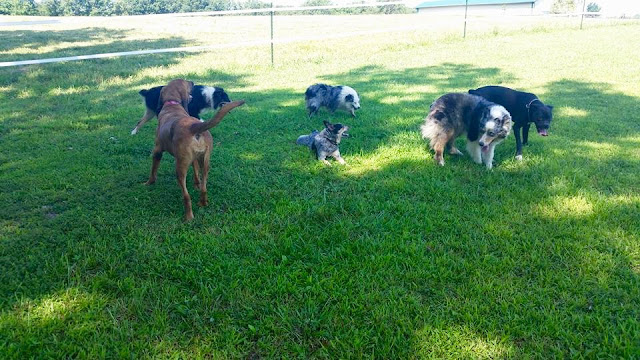 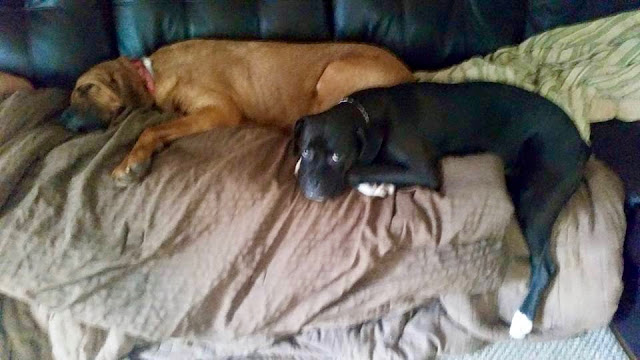 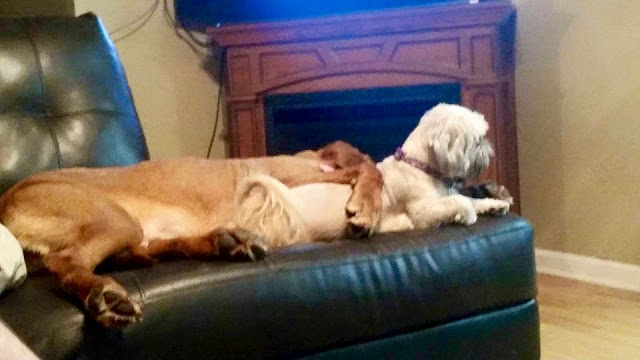 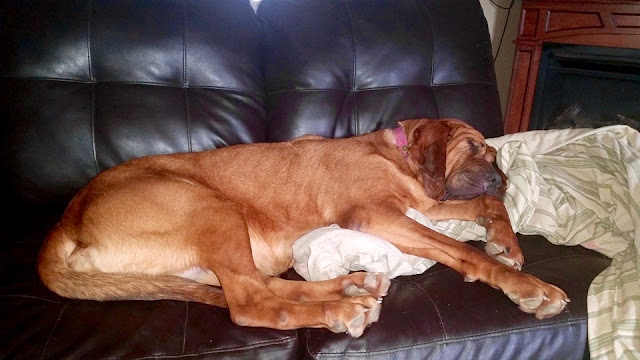 This black boxer jumped into my FJ when I opened the back door to let Stella in, the day I picked her up. Obviously the boxer love to ride in cars and she liked Stella. 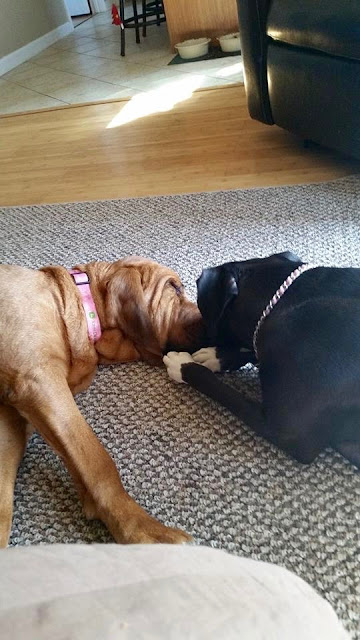 On 'casual' Friday's Stephanie use to put a polo shirt on her and take her to the office. Looks like she didn't mind the day of work. 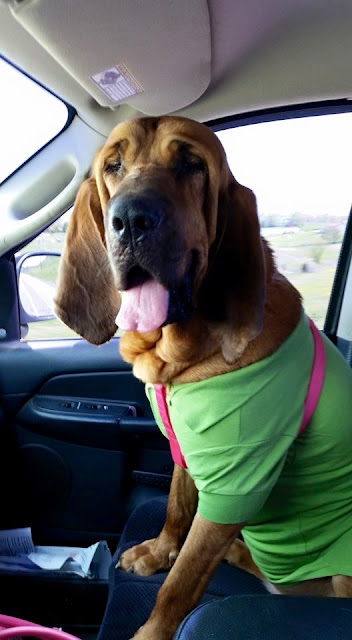 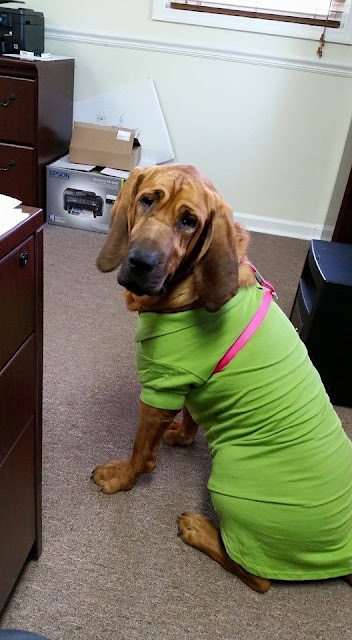 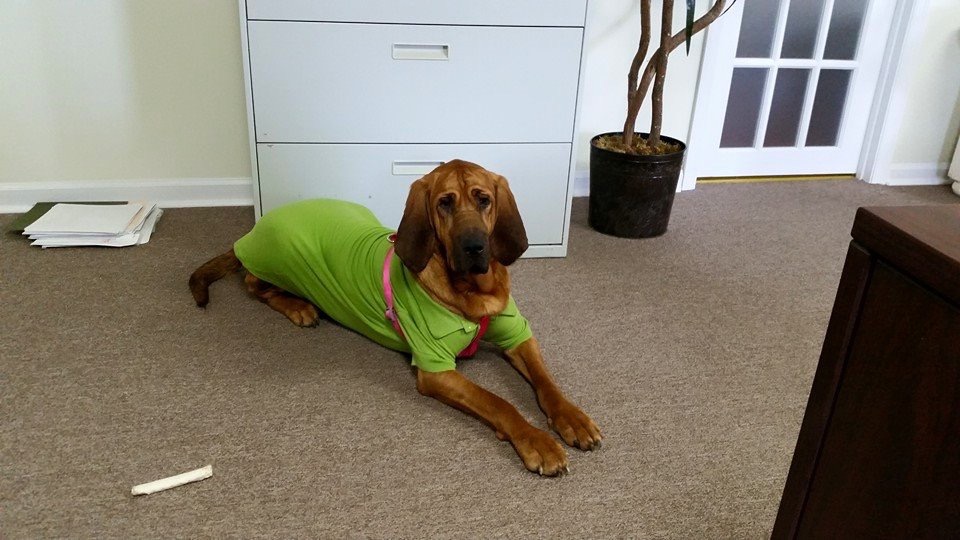 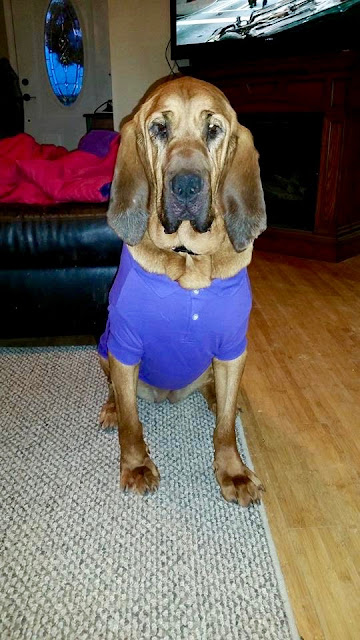 You can tell by the smile on her face there is no doubt that she enjoyed her last home with the boxer and herding dogs with plenty of land to run on. I am still happy I saw the ad for "a rehome" when I did and followed through with my gut instinct in making the decision. 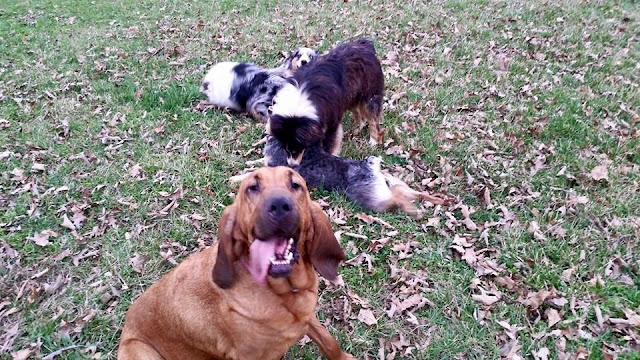 Today after lunch all three of us decided to back away from the AC and see how nice it was outside. Heidi decided it was perfect for a little sun bathing on the sloping front yard facing west. That is one of her favorite spots. 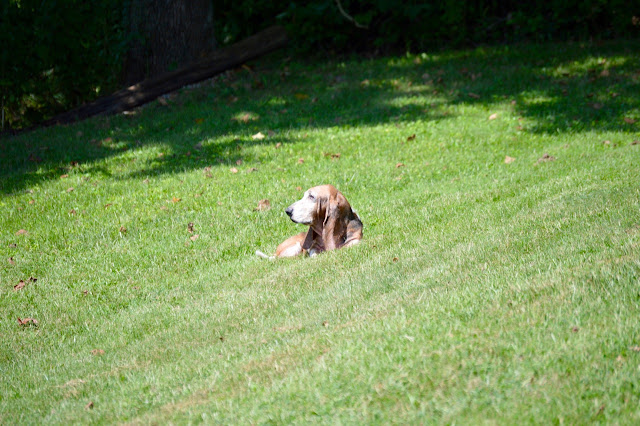 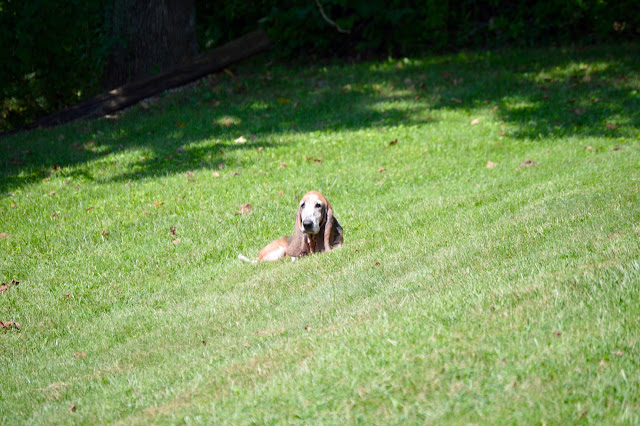 Stella didn't get more than four steps into the backyard where she literally dropped to the ground and decided a nap under the sunshine was perfect. 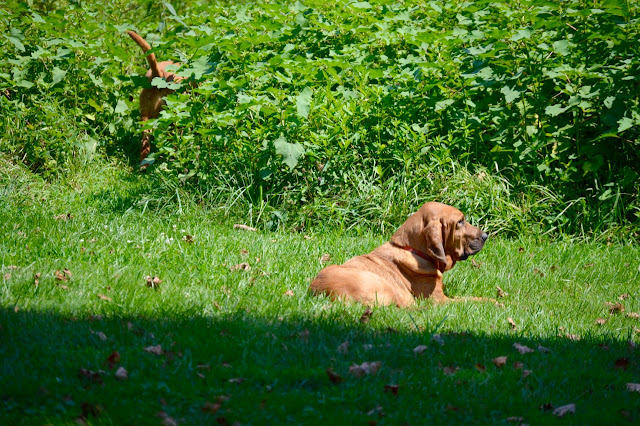 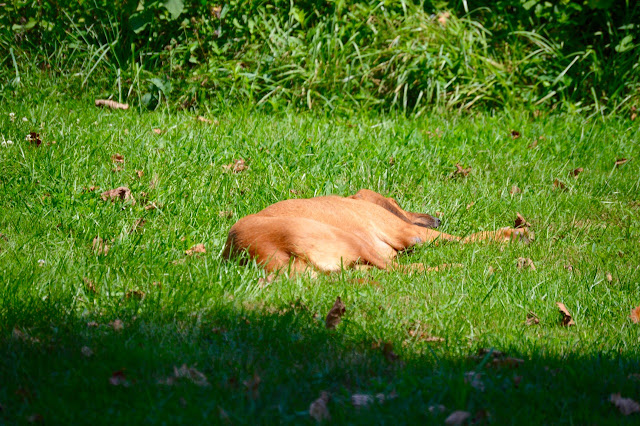 Sadie is Sadie though ... rarely lays or sits in one pace for too long, unless it's after 8pm and she will sleep the rest of the night away. So with her strong generic tracking ability she decided to explore the field while the other two relaxed. 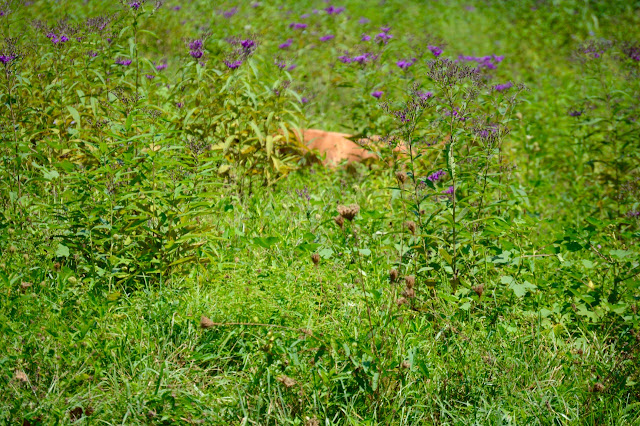 It only took me to come back outside with a ripe pear in my hand that I was eating, for her to lift her nose up from the ground and come running ... for some reason she thought the pear was hers. 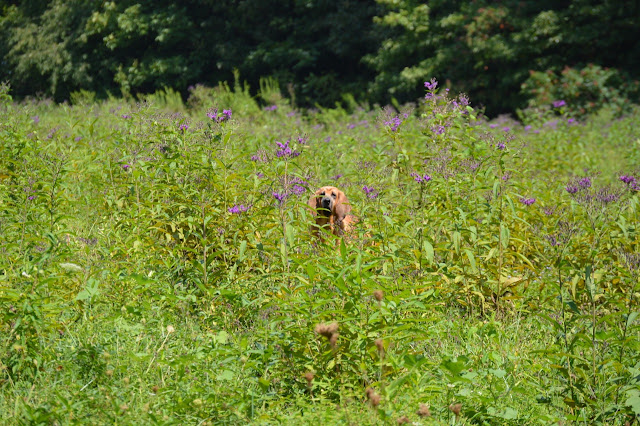 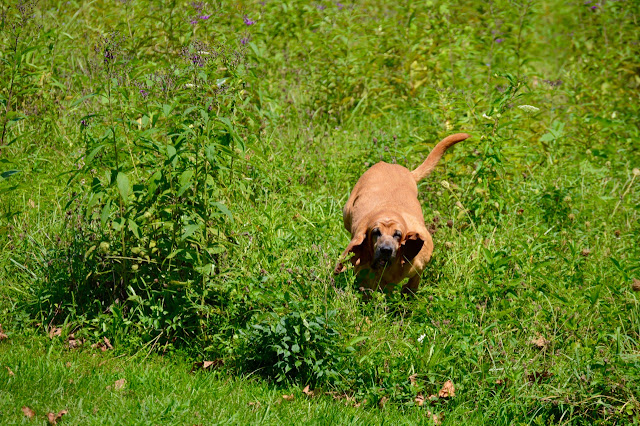 Can you tell a difference in quality? These next to photos were taken this morning from my iPhone 6S. 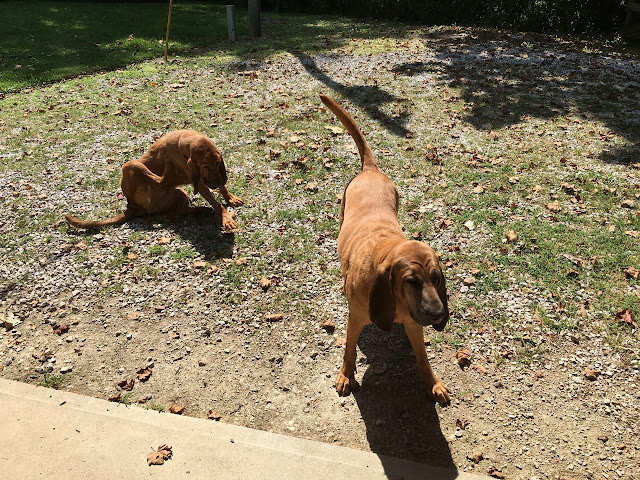 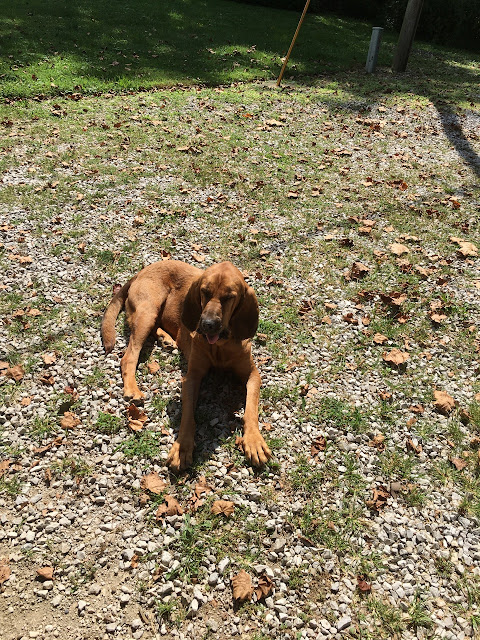 I could tell the difference quality from the older 5S I had last year. It doesn't show it on the blog but one of the new features is each photo taken captures a few seconds before and after you click to take the picture ... so there is a mini video for each photo but it is my choice if I want to view the photo like that, just by holding down the cursor over the photo.

Last night we took a late walk, it was still pretty hot at 8pm. The heat index was still at 107° which isn't hot to those down in Texas but 'up here' it's pretty hot for that time of night.

The walk tonight is somewhat questionable for that same reason.

I've been asked how do I like getting back into a smartphone after taking 10 months off. It is taking me a little time to remember what apps I had on the other phone and to remember how things work ... the more I use it, the 'how to's, and apps, have all come back to me.

It's only been one day ... but it was a good purchase. Under the new Verizon plan, the phone will be mine once it is paid for. I guess they might have been before but by trading them in with every upgrade, it didn't seem like it.

I've remembered a few more apps that I liked but hadn't mentioned. GasBuddy is great for finding local gas stations and prices as you travel. But I like to use GasCubby to keep track of my gas in gallons, cost, and it will give me an ongoing mpg. GasBuddy does that also but I like the format better and used GasCubby before.

When I was first dieting years ago I found a free app called 'Lose It'. You log in everything you eat under each meal or snack, depending. Any food with a bar code can scanned by the iPhone camera. As each food is loaded into your day by you ... it supplies all the calories, fat, etc based on you putting the correct amount of food you have eat.

I found in the past doing a food log not only helped me control my eating habits and portions but I also lost weight. You tell the app how old you are, man or woman, how tall and how much you weight ... plus how fast do you want to get to your desired weight that is calculated by the app. Once that goal is set, the app will monitor your progress.

So I am pretty happy with my purchase, no buyers remorse of any kind. Verizon has already given me an itemized bill showing me my new costs per month even down to the small amounts of government fees that are charged.

Football season is almost in full swing here in 'the tropics' of Southern Indiana.
at August 30, 2016