Stella Sneaks Off In Seconds

I was tired of seeing these two doing this over the past few days, if not weeks. I knew they would both prefer to be outside exploring and tracking all those scents their powerful noses pick up. It had not rained this afternoon so we had a little break in the weather so to speak.

I pulled out another pair of socks to get wet and a dry pair of shoes to sacrifice for the cause ... an afternoon walk for the hounds. When I asked Heidi if she wanted to go, she jump off the couch and sprinted ... to the bedroom ... I took that as a "not interested". 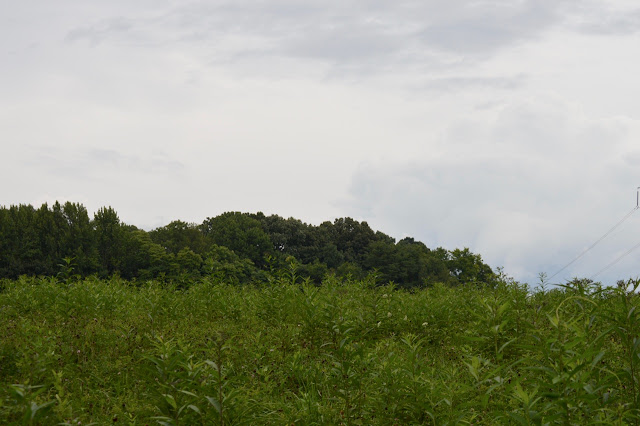 Today had a little added flavor to the walk, unexpected and somewhat of a surprise. I didn't see any kind of warning signs during the walk to tell me it would happen ... the surprise that is.

I am not sure what these orange flowers are. There are not many of them but they brighten up the field and the butterflies love them. 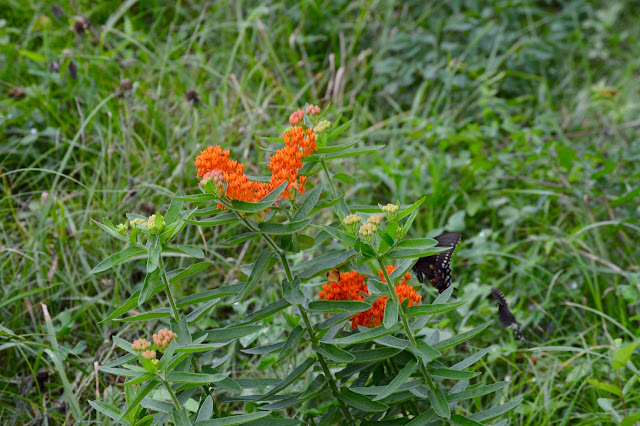 Stella having fun bouncing all over the place while Sadie is way out in front of us. 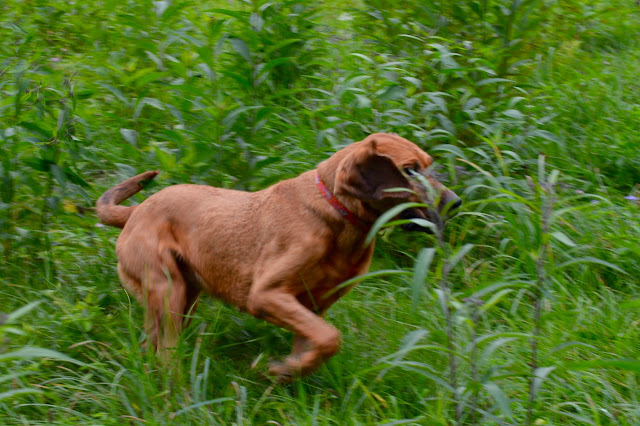 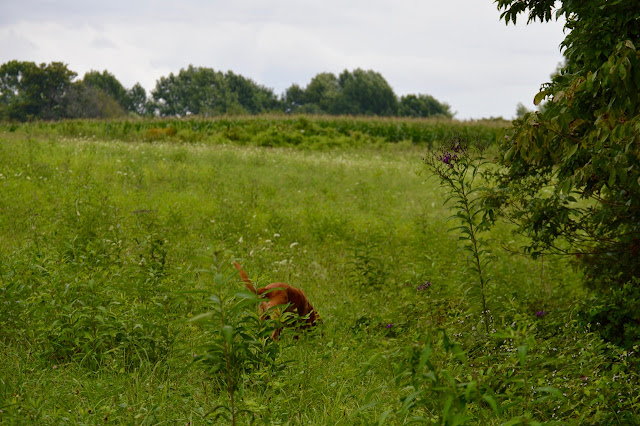 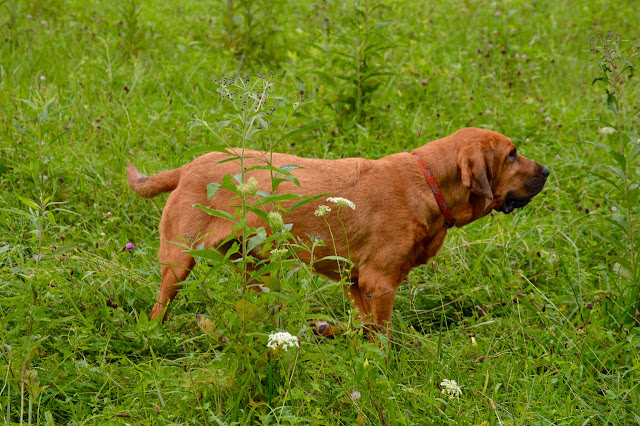 Sadie has been the one lately to run toward that part of the field in the far right corner. That use to be Stella's favorite for most of the year, but not lately. 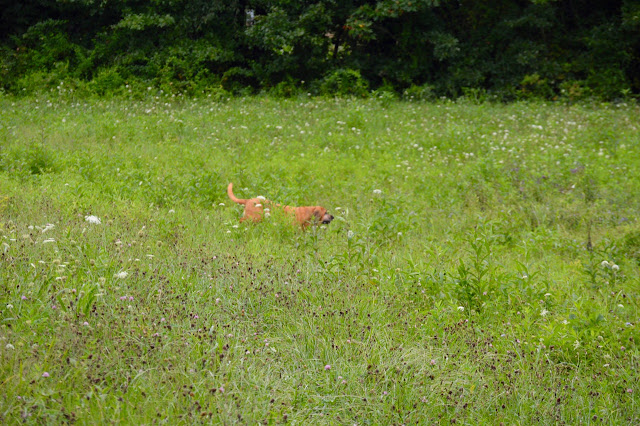 I like the bright purple in a field of green. 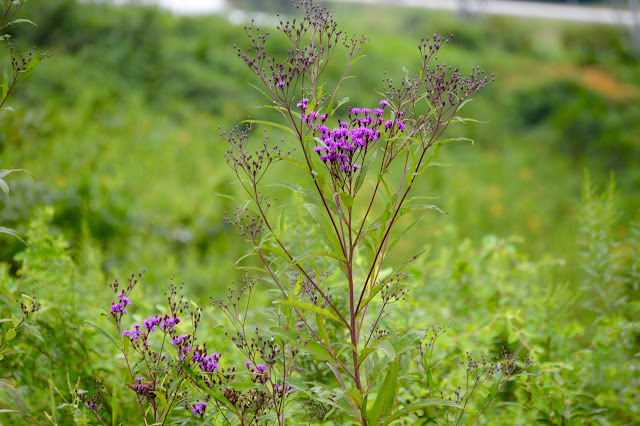 I'm not sure what has Stella's interest in this photo. Sadie is way off in the right hand corner. 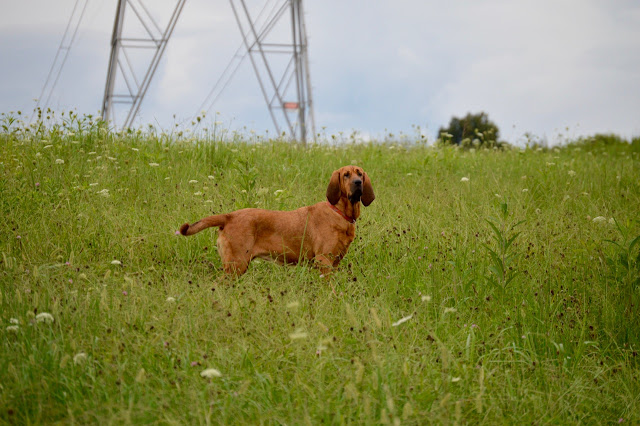 Stella eventually ran over to meet Sadie as she ran to catch up to me ... but she never moves quickly after she decides to explore. 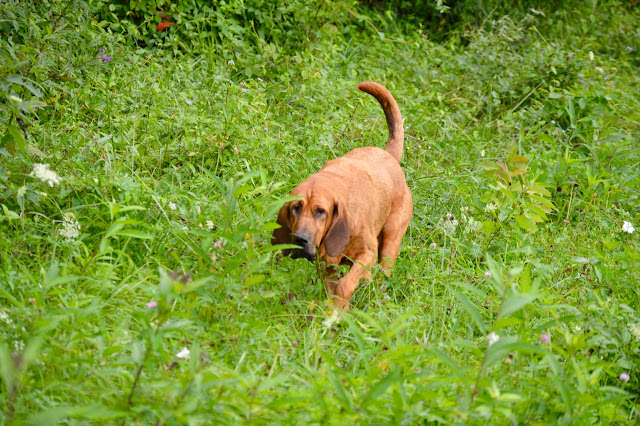 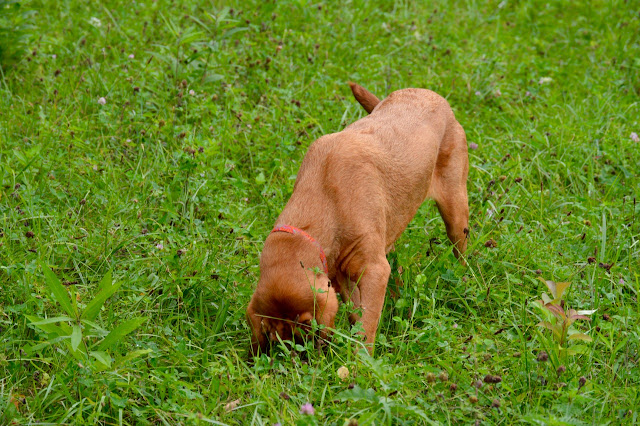 I like the slight change in color. Maybe fall is on the way. 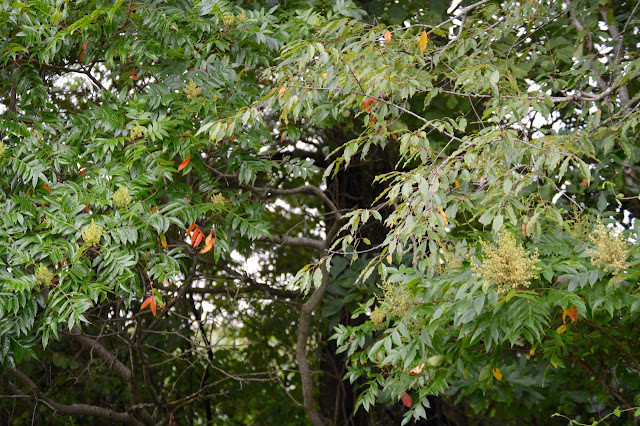 We are past the halfway point of the walk. No surprises so far. No deer had been seen. Nothing out of the ordinary at this time in the walk. Things changed though after I snapped the photos of them on the hay. 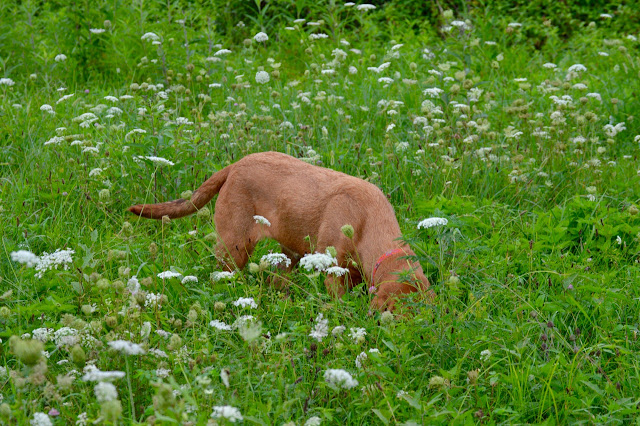 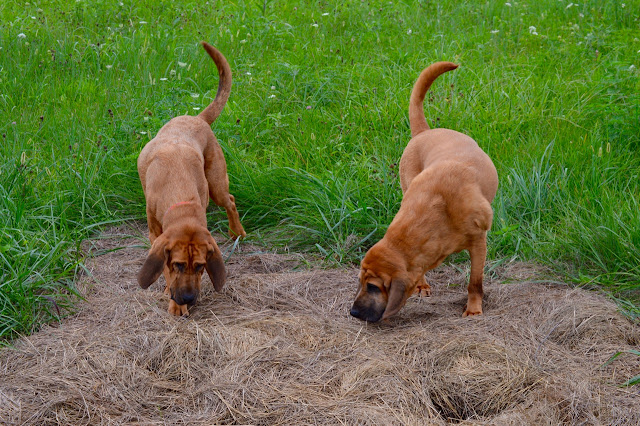 Sadie and I were walking, heading home. Based on past experience I figured that Stella was walking behind me like she does at this point of the walk if she is too hot or tired. I didn't know what she had done. 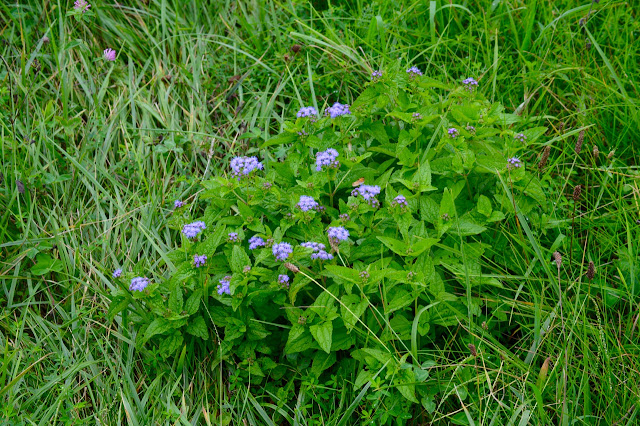 I turn around just to check to see where she was ... Stella was no where to be found. Totally out of my range of site. She was gone just like that and I never heard her howl or bark, if she did. I called her name but never saw her. I knew there was only one place she could be but I didn't expect her to be this far away.

This is WAY OUTSIDE her boundary. The bad thing was for the first time that I can remember since I got her almost a year ago ... when I called her name, she heard me, looked my direction ... then turned and started trotting toward the rolls of hay and toward that red brick house. Like any breed, once they get to a certain point, they will eventually press that envelope a little further next time. This house to much closer to the highway than my house is and I definitely don't want to start a habit where Stella decides to go visit neighbors when she has the urge. 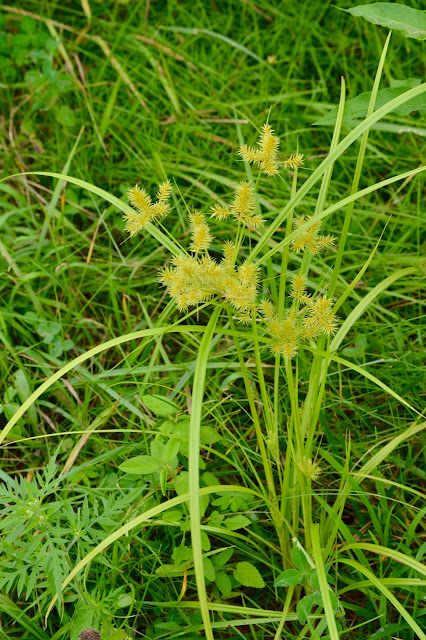 With Sadie trotting toward her and me yelling her name ... Stella finally started to come our direction. She knew she was in trouble or knew she had gone to far. Once inside the house, she was slowly wagging her lowered tail as she looked at me sitting at the desk. She slowly walked my direction and let me know by poking me with her nose, she was in the wrong.

The local tv weatherman said we had over 3.5" of rain in the past 24 hours. That is not much considering what they are getting in Louisiana but for this area it is above normal for August. Add that to the months of June and July where we averaged over 6" of rain per month ... it has been a pretty wet summer.

He let me know that I will have a couple of days to mow the yard before it starts raining again this weekend. That seems to be the typical schedule this summer and why everything is so green.

Those domestic things on my list I mentioned in this morning's post did not get done today as planned. There is always tomorrow, and the next day and the next day .... you know how it goes, if you are retired.