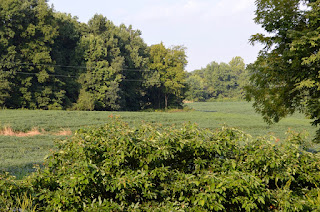 First of all I want you to know that when I post temperatures and the heat index, it is for added information only and to give readers a better idea what the hounds are putting up with during their daily activities. It is not me complaining because I love hot weather.

Like the title says, today's heat forced me to post and even finish my blog later tonight. Otherwise there would have been nothing to post as far as photos for today's activities. It was a productive day though. 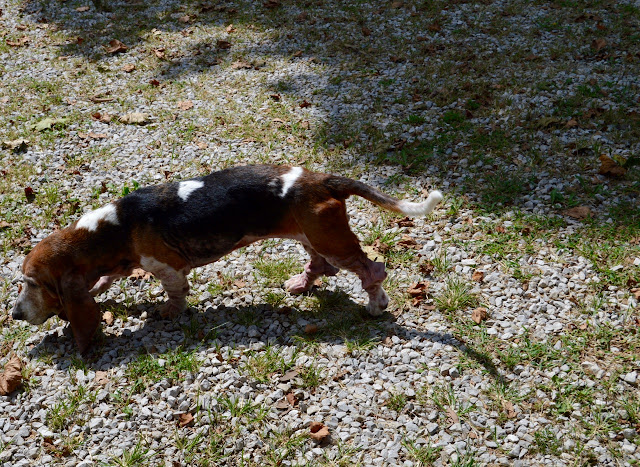 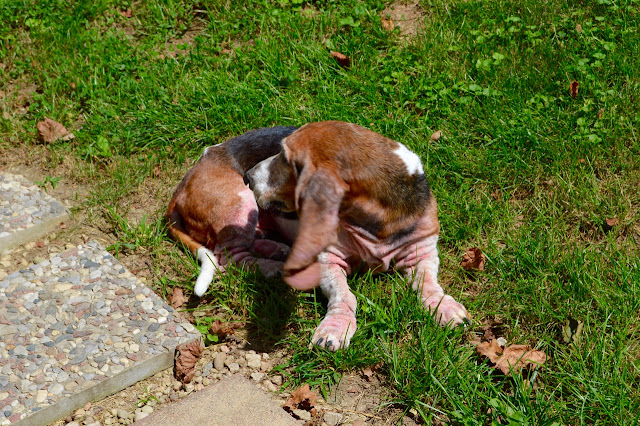 I started this morning giving Heidi a shampoo bath. These photos show a lot of redness but by the afternoon all of that skin color was the normal color, with no redness. I wanted to trim her nails but since we did that earlier in the week ... all of the ends were filled with the dark spot, which means the blood vessel is too close to trim. 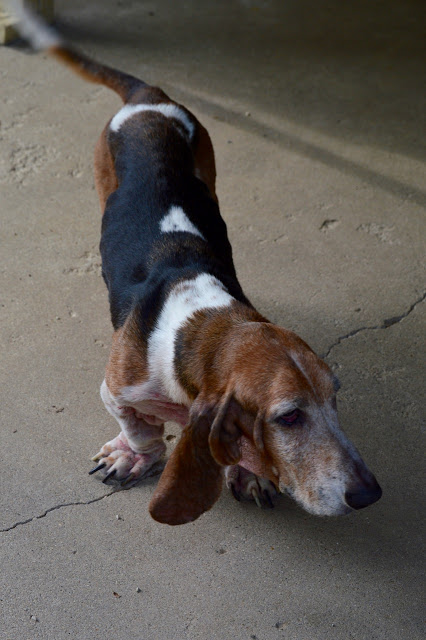 For those anxiously awaiting to see how much weight she has gained ... no need to sit down on the announcement ... only 2 pounds. So she is up to 38 pounds after losing 12 back in the spring of 2015.

I was motivated enough after I dried her off, to start in on the dishes. So by noon a lot was done and the hounds had their lunch. The air outside was like an oven and reminded me of the thought I had late last night ... I could feel how cold it was last February and will be this winter!! 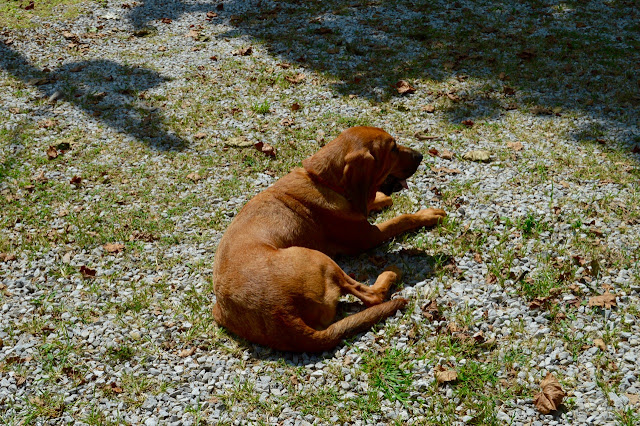 You know the kind of freezing single digit temps I write about sometimes. Where it is so cold I stay inside while the hounds are outside. Or it's so cold outside with snow and ice in the field that Stella stops walking and raises her front paw due to the ice and snow getting between her toes.

When I remembered that thought and felt it in such detail, I instantly thought of all 4 of us camping in a tent next winter in SW Arizona. That might happen this year, finally ... still everything with me is pretty fluid when it comes to plans.

We had a visitor for lunch ... he was crawling around the edge to get to some shade. Each of those tips of the legs are a gold color. I don't recall ever seeing one with this design. 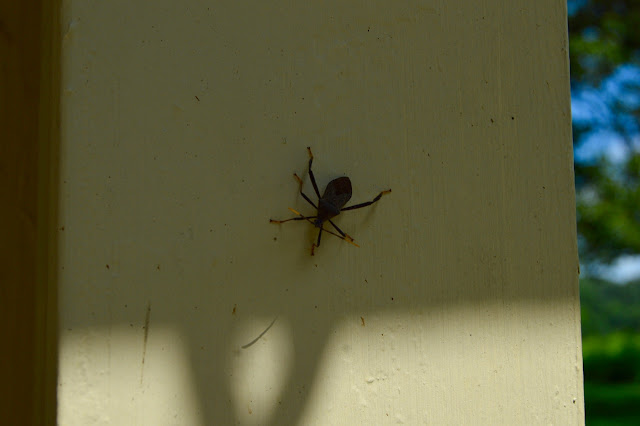 Around 4:15pm, Sadie woke up for her nap, walked over to me and gave me 'the stare'. That stare she has telling me it's time for a walk. Just to make sure, I double checked Wunderground weather and saw it was 95.7° and the heat index was 110°. That's too hot, so I wanted to wait an hour or so for the temperature to drop a little.

Would the hounds be able to wait that long for a walk?? They were going to have to. I have found if the temperature is in the high 80's and the index around a 100° that is cool enough for us to venture out into the field.

Sometime around 5:45pm it was in our temperature range of being 'bearable' and off we went. Sadie was very happy to get her walk in today. By the way she was acting, she was pretty sure we were not going today. 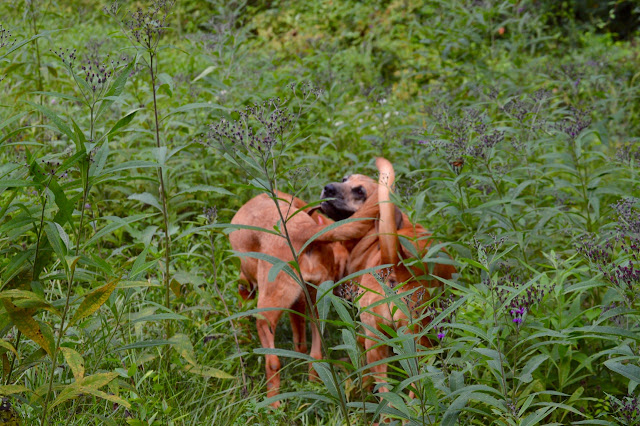 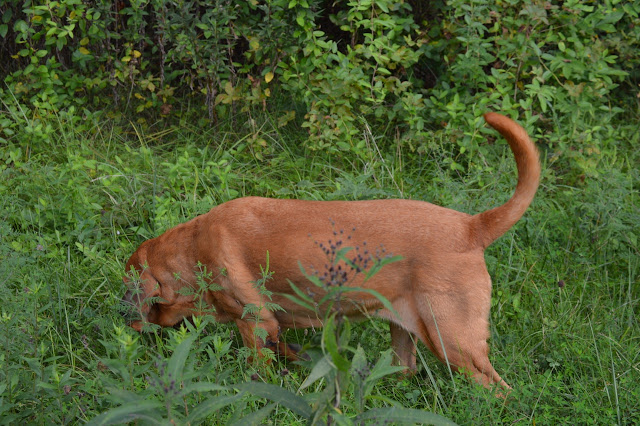 Sadie and I were already up by the first turn and of course the freedom fighter Stella was already way behind and out of view. Sadie and I continued on the walk, knowing that Stella would come running toward us eventually. 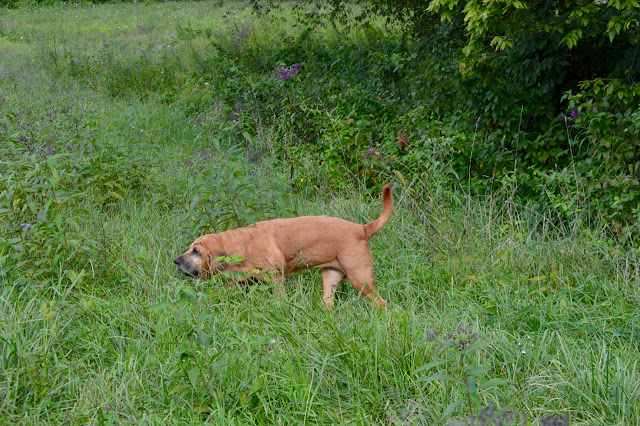 Scratch that word 'running'. She lets me know if it's too hot by the pace she takes. No running today, just a slow walk and a long one to catch up to us. 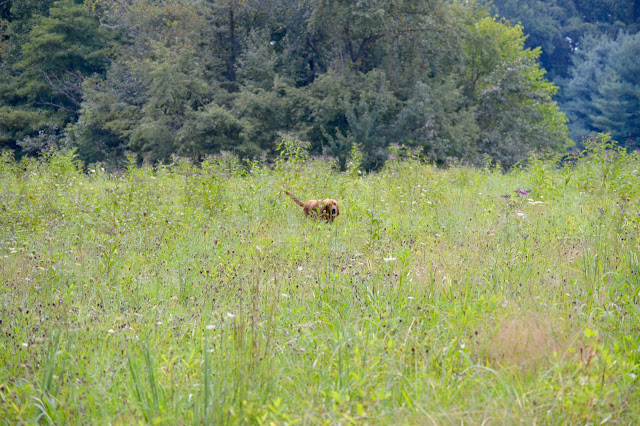 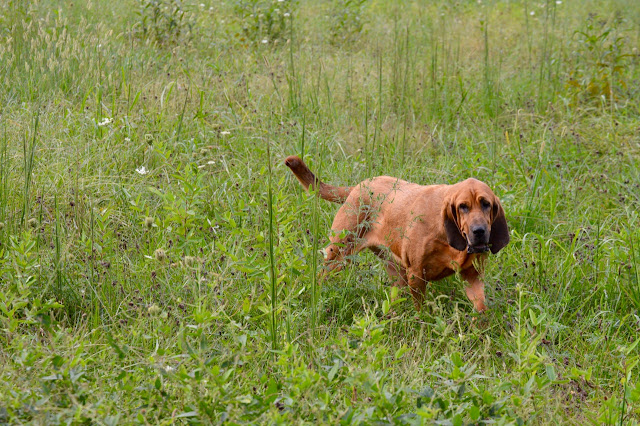 After she met Sadie here, she wouldn't leave ... Sadie and I did though and had already made the turn for the homestretch home before Stella even raised her head to see where we were. 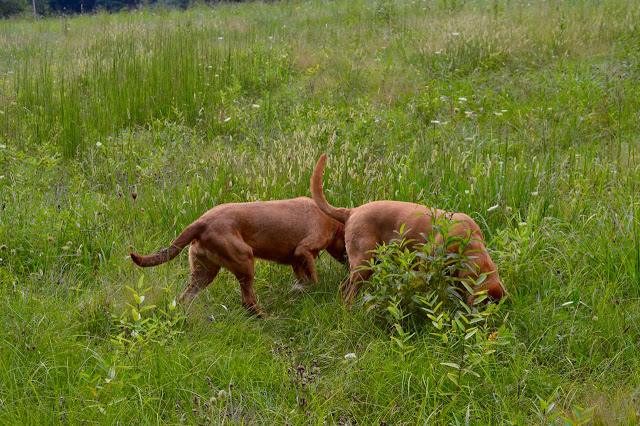 Sadie is the better tracker of the two and has always had a strong tracking ability. I mentioned in the past that when I talked to a different breeder that ended up with Sadie's dad ... she asked me 5 questions over the phone and Sadie was positive on 4 of them ... she was a strong tracker and not a couch potato. Ironically based on that test, this breeder said she would not have given me Stella for that reason. 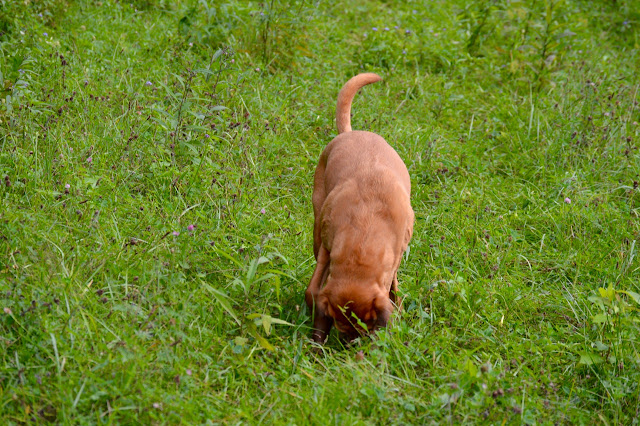 Stella continues to drop behind and then catch up eventually ... only today ended up a little different than the other walks. 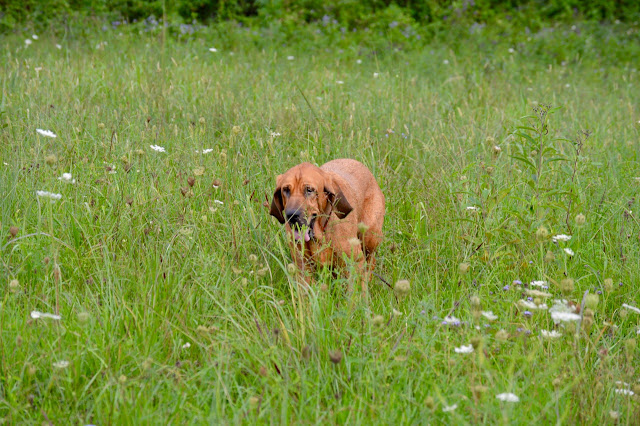 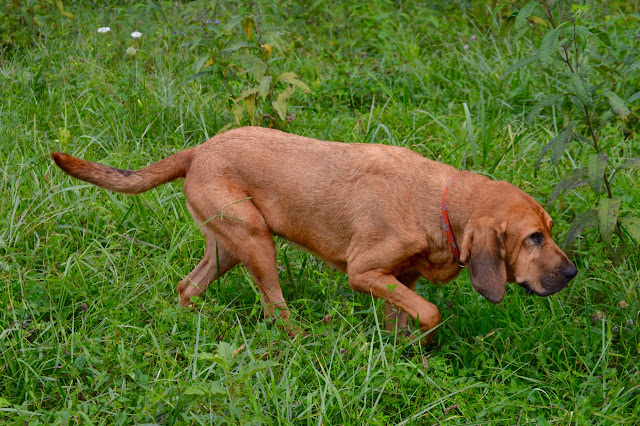 Once again ... After Sadie left this spot to follow me back to the house ... Stella stayed there. She stayed there long enough for us to walk back inside the house, drink a lot of water, for me to go to the mailbox, then walk to the far north corner of the yard to yell her name. I could see her in the same exact spot as we left her. 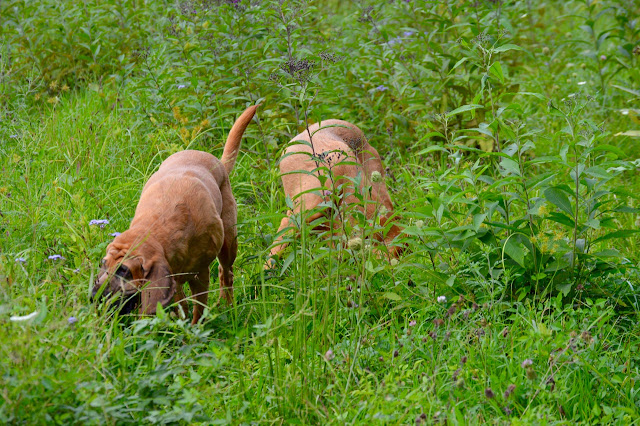 Both the bloodhounds are sound asleep as I write this, so they had a good walk.

The other exciting thing happening tonight, late my time, 10pm local ... Cal is playing Hawaii in the first college football game of the 2016 season ... IN AUSTRALIA!! It will be televised live on ESPN and will be around noon Australia time. I know that may seem strange to some readers but when you are addicted ... and I mean really addicted ... to college football like I am, then the only decision will be what kind of food to fix to eat during the game ... after 10pm.  LOL

I will say with all the time spent inside today, the hounds didn't mind it. All three of them are more than happy to sleep in the air conditioned rooms. The couple of times we did go outside, they didn't stay out long and I did not have to call them to get them headed back toward the house. They trotted to the door on their own.

I was curious today so I looked back at my blog post for this time last year ... very very similar ... very hot. I was heading to Kentucky on Sunday to pick up Stella (Dipstick) and I had just washed both vehicles, the FJ and the Mini Cooper. They both were spotless and shined even without waxing. I mentioned how much dog hair I had vacuumed out of the FJ. I think this year will beat that amount of last summer.

The FJ is pretty trashed out right now with hound drool on the hard plastic pieces, windows covered with nose smudges and dog hair that has moved to the edges between the folded down seats and around the edge of the rubber mat in the cargo area.

In the meantime, the hounds have had their walk for the day/night. I'm a few hours away from kickoff, where the world stops for me until the Final 4 in College Basketball is played next April in 2017. Things will not change that much though ... the hounds will get their daily walks in, normal activity for me ... just trading baseball for football on tv at nights. Movies will start again in April.