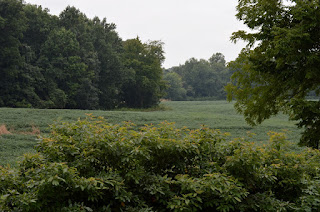 The local tv weather guesser stated today would be a really hot day like we have experienced recently ... then on to cooler temps.

I'm glad he was wrong in his prediction. It was nothing like the 'heat dome'. By 1pm, sitting outside and enjoying zero humidity and coolness in the air ... it was a nice change compared to yesterday.

Did I do my yard work a day too soon? I forget that I am older than I use to be and then feel those consequences the following day if not the night of my over activity. After my work outside yesterday, I was in bed before midnight and slept like a rock ... that is until my dream told me my credit card had been hacked and I was now tens of thousands of dollars in debt. 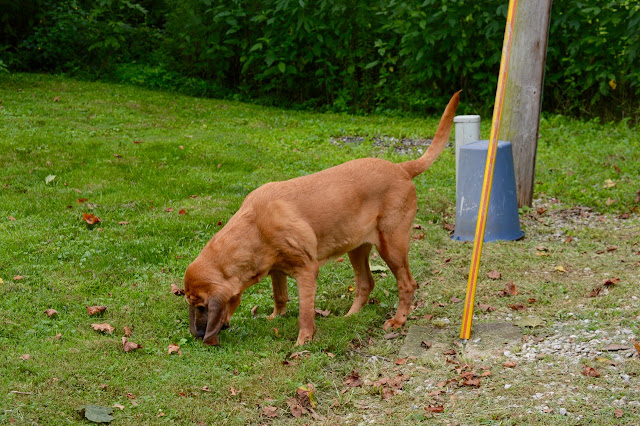 All was good though after that first cup of coffee. 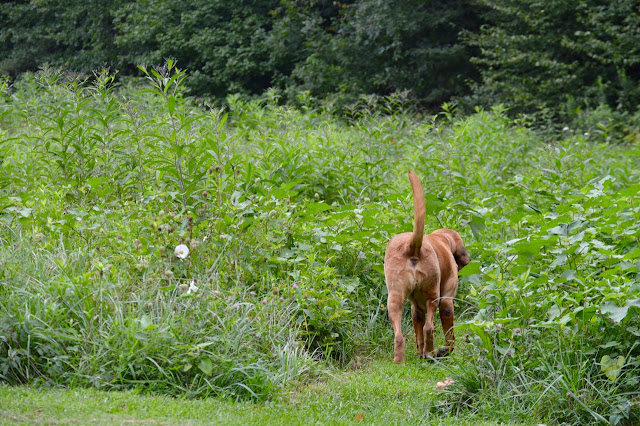 There wasn't much on the agenda for today. I wanted to cut more weeds on the driveway to the ground so they die out a little. That option seems to have worked this summer instead of spraying the chemical loaded weed killer. I am still not convinced even after a 24 hour waiting period, that the weed killer is the best thing for the hounds. 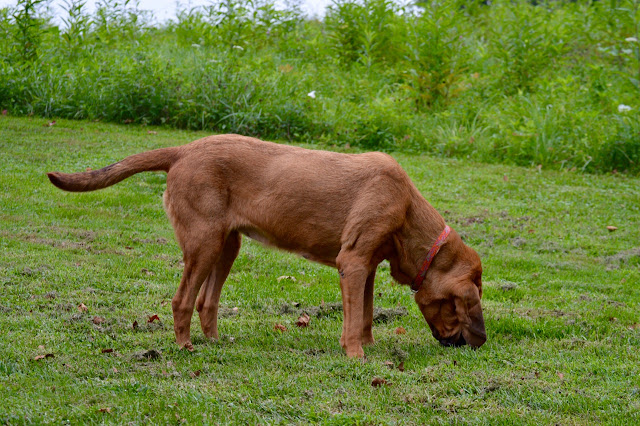 For one thing, it would be almost impossible to keep the hounds off of the sprayed area for 24 straight hours. They make multiple trips outside per day. So with only a few months of summer left ... I'll put up with the weeds and spend some time cutting them to ground level ... having only to wait for my battery to recharge on the weed eater. 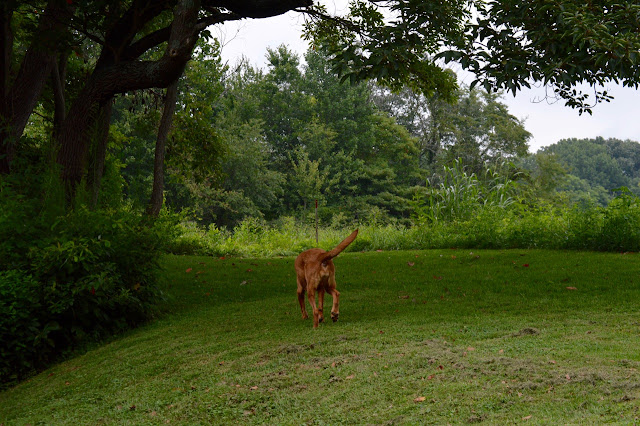 As you can see Stella was moving slow today and Sadie headed out to her normal spot to start her day. Although these photos were taken after 12 noon, it was not their first trip outside ... just the first trip with the camera. 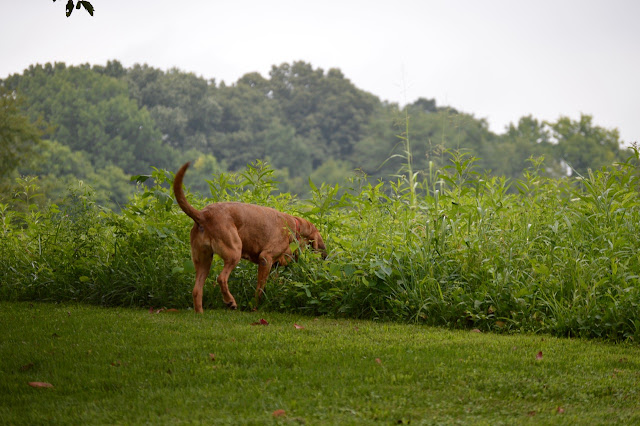 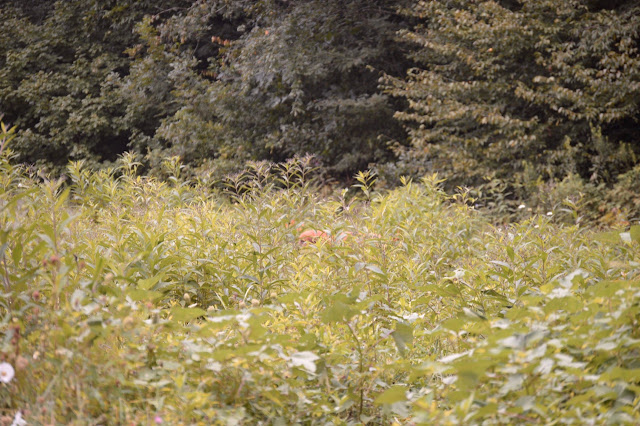 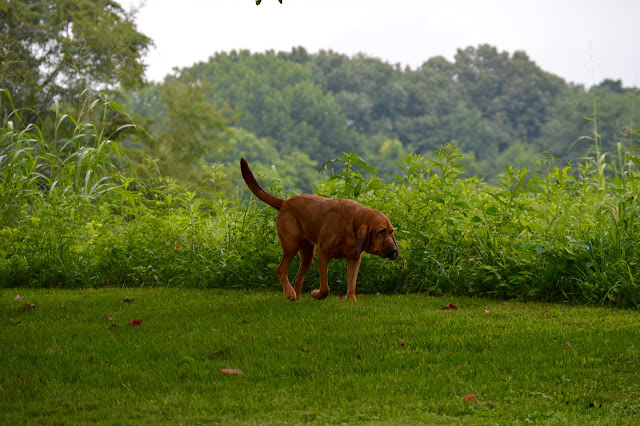 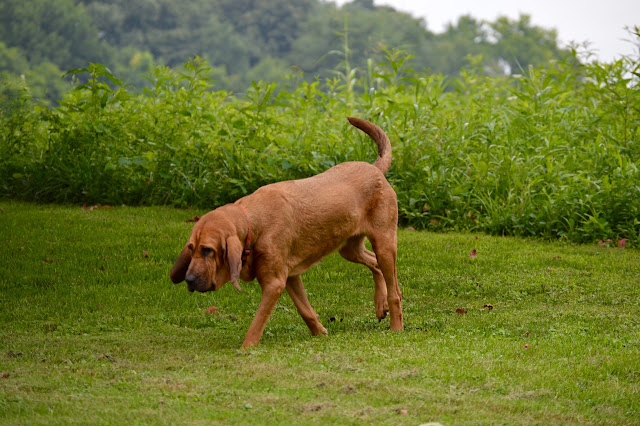 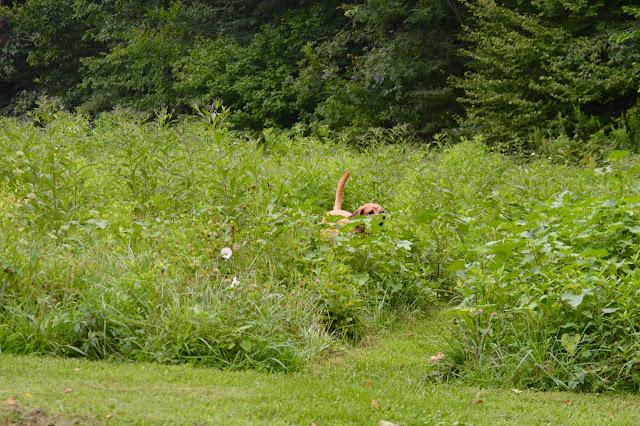 As I caught Sadie in this stance I moved the camera over to the left to see Stella and before I could catch her, they had both ran toward each other greeting each other. Their play did not continue though. 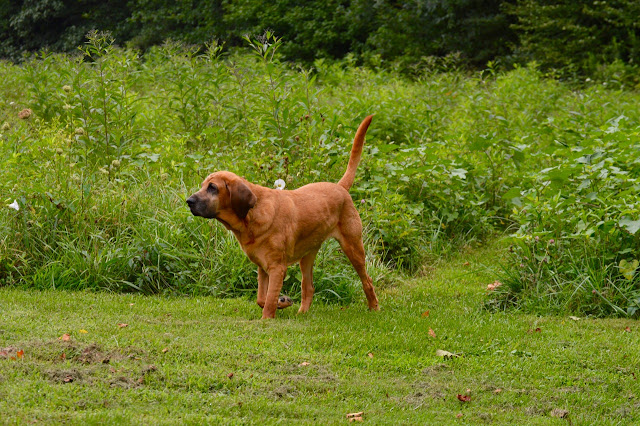 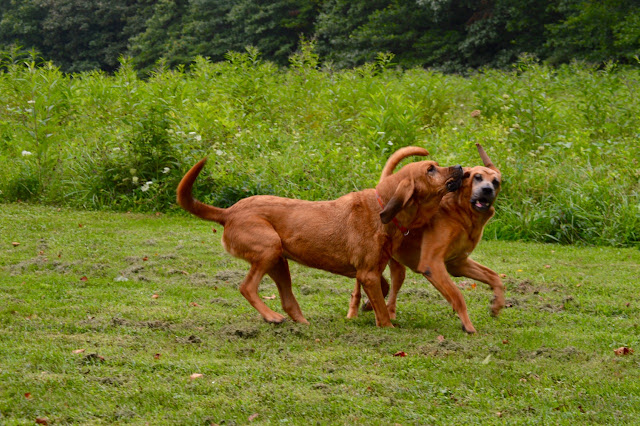 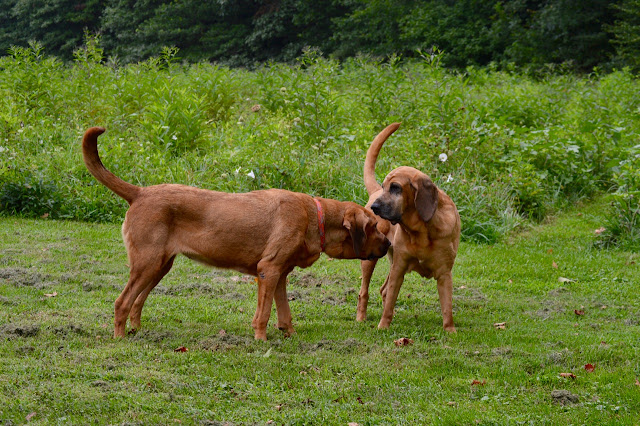 It was back inside for some sleep time before their lunch. The AC was in the off position today ... nice inside with the windows opened.

Laundry was done last night so that was another thing off the list. I like to vacuum so that was not a problem today and I got a few more weeds cut down to the ground level before the battery wore out. I've never had any luck with the fuel based weed eaters ... they eventually get to the point of never starting again and I get tired of trying.

I had the urge to take a short drive in the Z4 ... so the three hounds moved to the bedroom with the door shut. That's for my sanity and their protection while I am gone. Once again I arrived about an hour later and Stella had not tore anything up attempting to escape from the room. She is on a streak of being good.

It was so relaxing today I caught myself sitting outside more than the past months since the heat wave is over, at least for now. A cool breeze and 7 acres of field for the hounds to roam. What did they do but lay beside me, each trying to get as close to my feet as possible.

It wasn't even 4pm when Sadie gave me that look that it was time for the daily walk. I knew it would not be much hotter a couple of hours later then it was now so off we went. 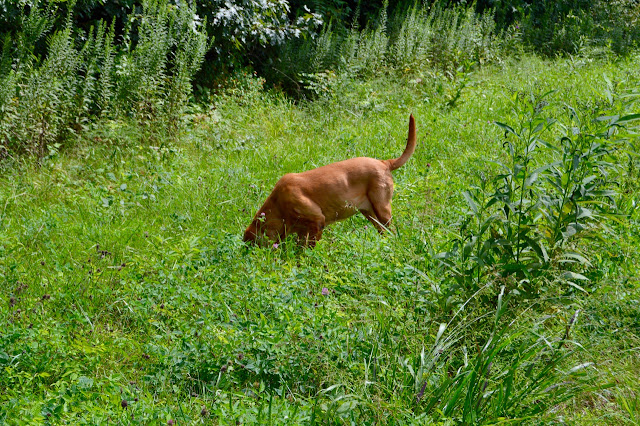 As usual Stella stayed behind soon after we started the walk. 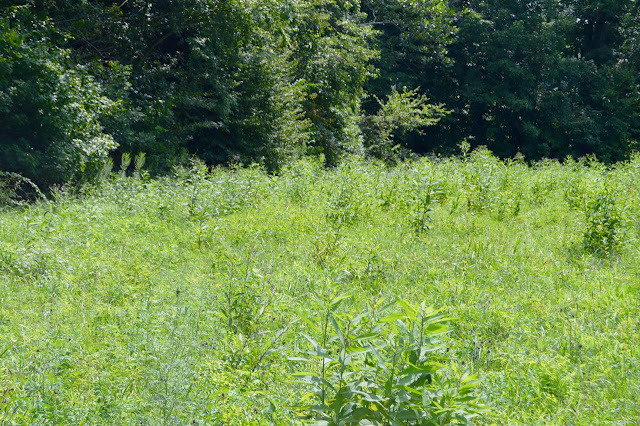 By the time I got to the first turn I looked back and didn't see her. As I scanned the camera to the right I caught a glimpse of her. 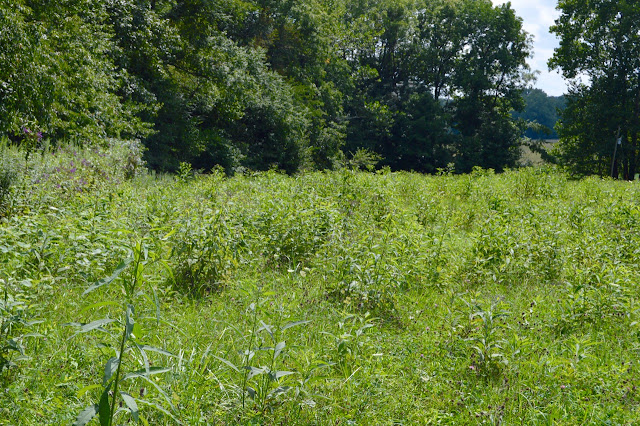 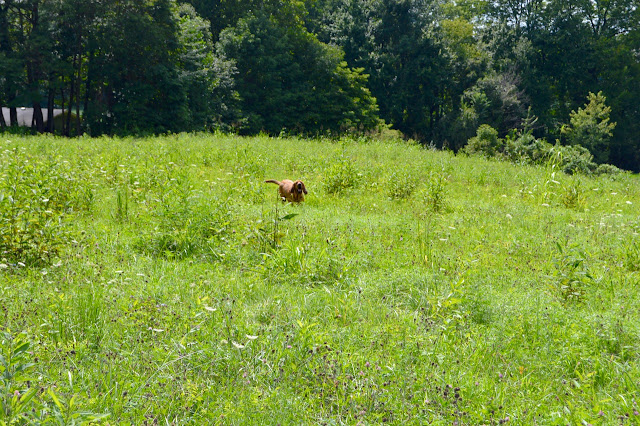 I had a feeling it was going to be one of those days where Stella was on her own travel plans and anything I said would be ignored ... such as calling her name. 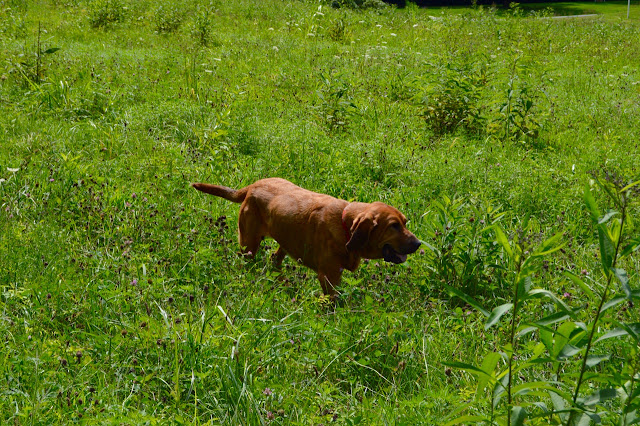 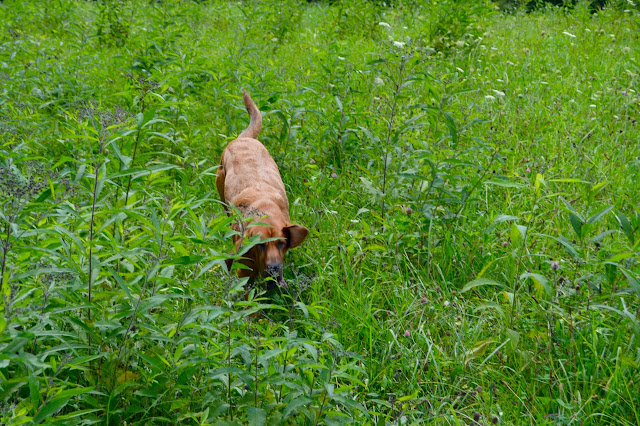 I was right about my feeling ... Sadie came running to catch up to me but Stella was oblivious to what was going on around her. 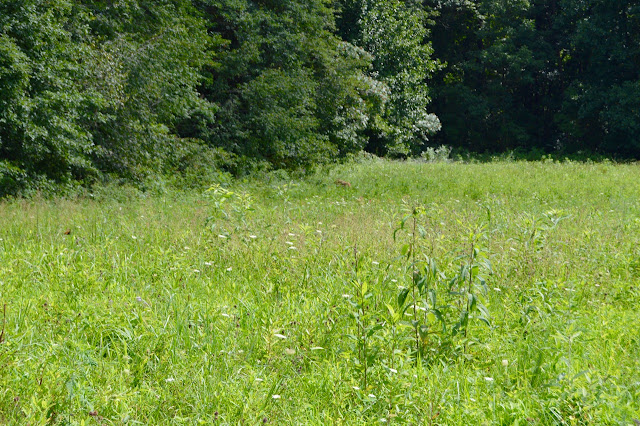 Here you can see Sadie and Stella on each side of the photo ... both on their own schedules. 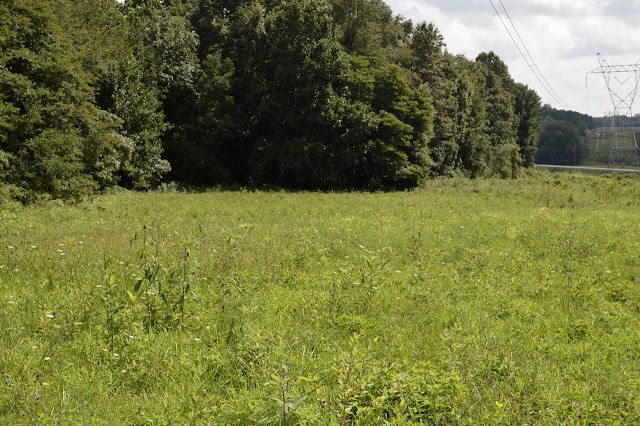 Sadie is not like Stella though, she always runs to catch up without me calling for her. 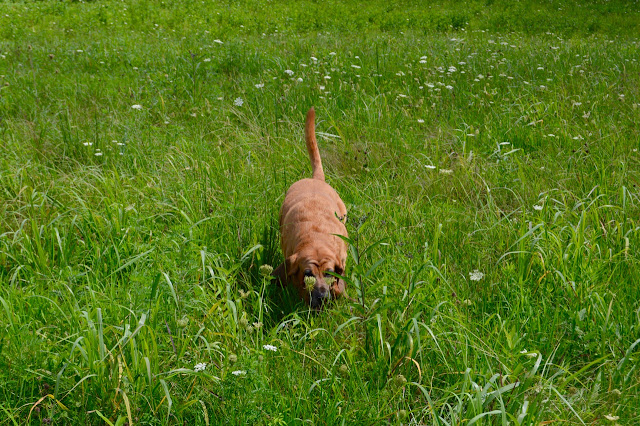 I saw Stella start running along the edge of the field so I assumed she was following our path and I'd get some photos of her as she got closer to me. 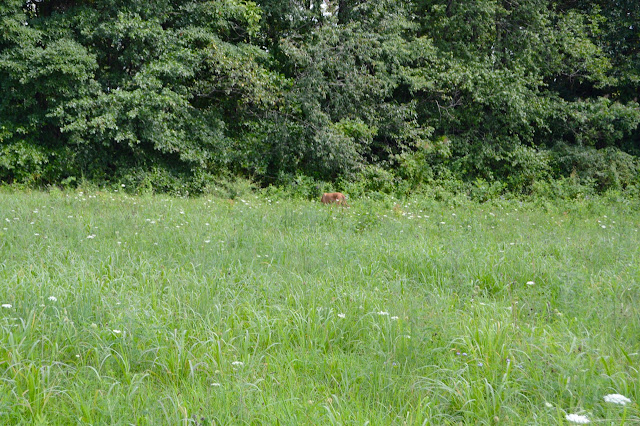 I was wrong. She had ran outside the 'no fly zone' and I was too hot and too unmotivated to walk back just to have her ignore me. I kept walking to the house. Stella was no where in sight. 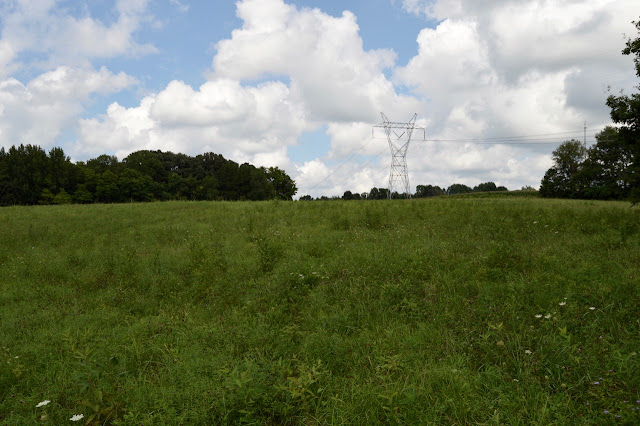 Not quite home I had decided once I got back to the house, I'd get the FJ and DRIVE that direction on the north part of the field where she went the other day ... about the time I thought that, I glanced behind me to see where Sadie was and there was Stella right behind me. 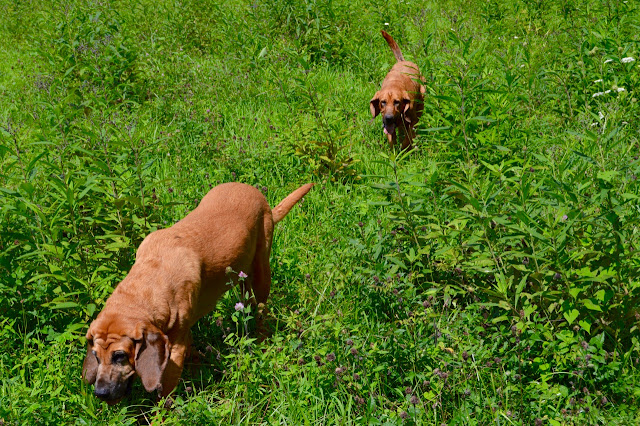 I keep thinking it might be time to go back to the retractable leash. There are times I am not real thrilled with her extended freedom she takes advantage of. Like I said the other day, those boundaries will continue to be pushed out further than what is good for her.

With a tall glass of ice tea, a cool breeze coming through the north living room window ... it's nice and quiet, no tv, no computers, nothing but silence.