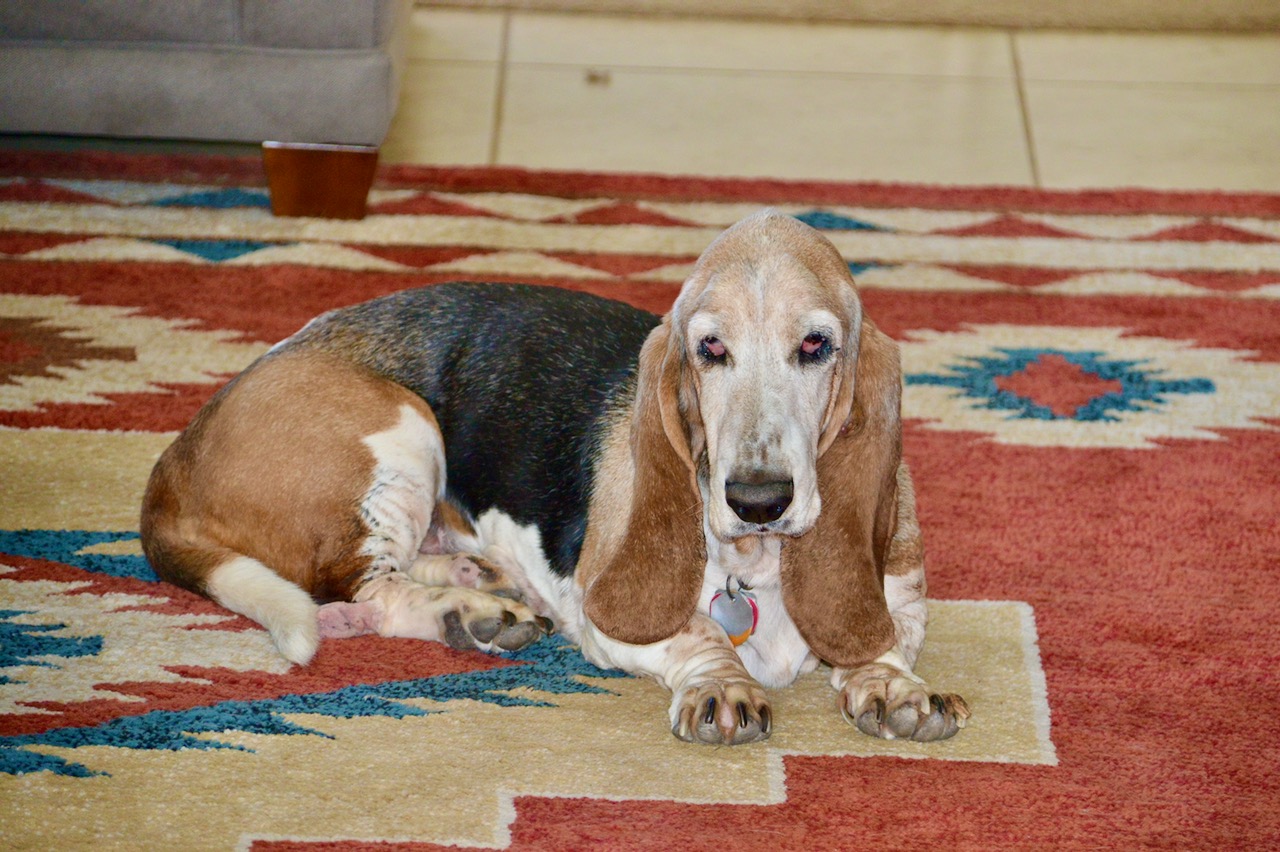 Heidi finally got over her intestinal issues but it was not the combination of food I fed her that fixed it, it was the 10mg of famotidine that did the trick. Within two days ... back to normal. A vet gave me a handwritten note in 2015 when she was having the same problem, to buy that in a generic brand. One dose every 12 hours for a hound that weighed 45 pounds. So it was pretty nice last night to get a whole night of sleep for the first time in weeks, instead of opening the door for her every two hours.  Our weekend started 4:30am Saturday morning and didn't really stop until mid-afternoon Sunday. 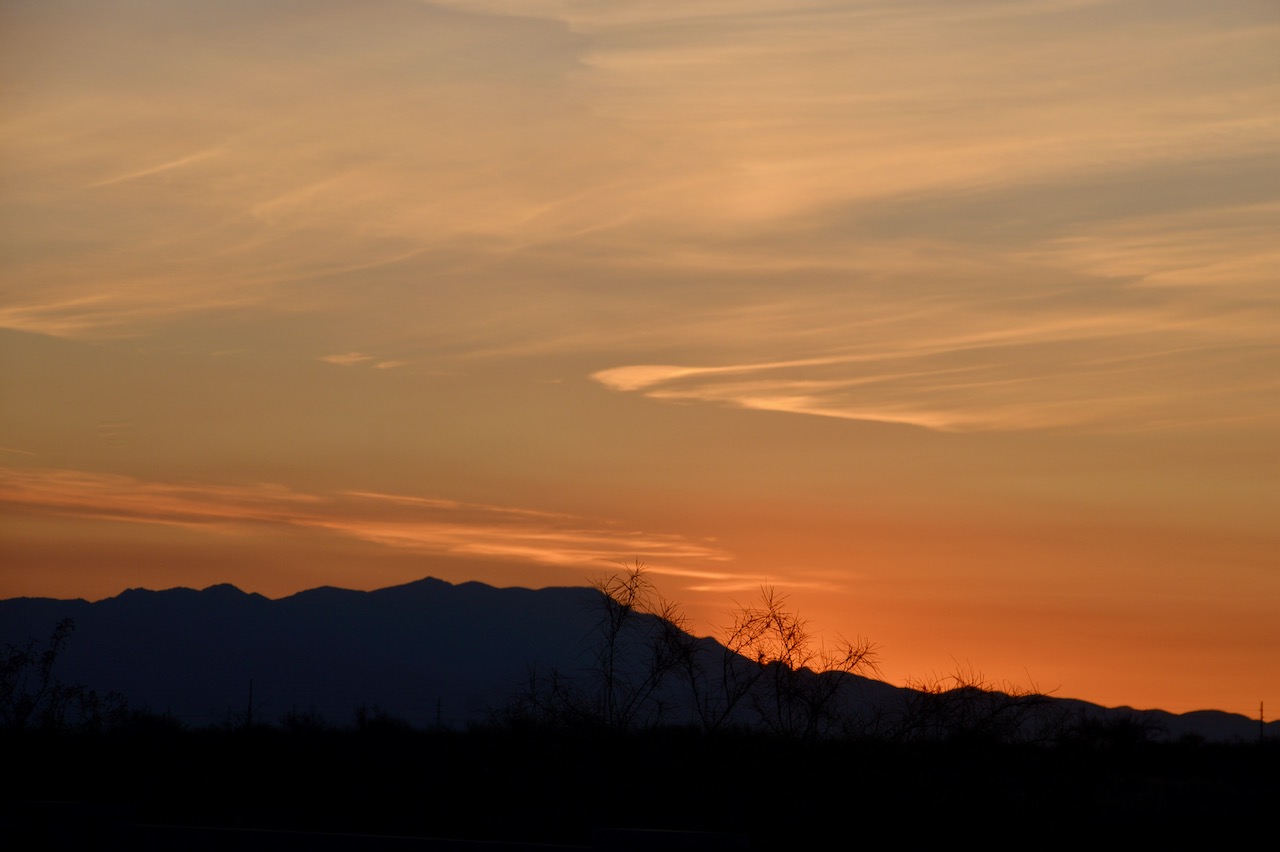 The sun keeps rising later in the day, and with temperatures in the low 40's, Stella and I wait a little longer before we take our morning walks. It was still nice to sit on the patio with a jacket on and a hot cup of coffee watching the sky and listening to all the birds. 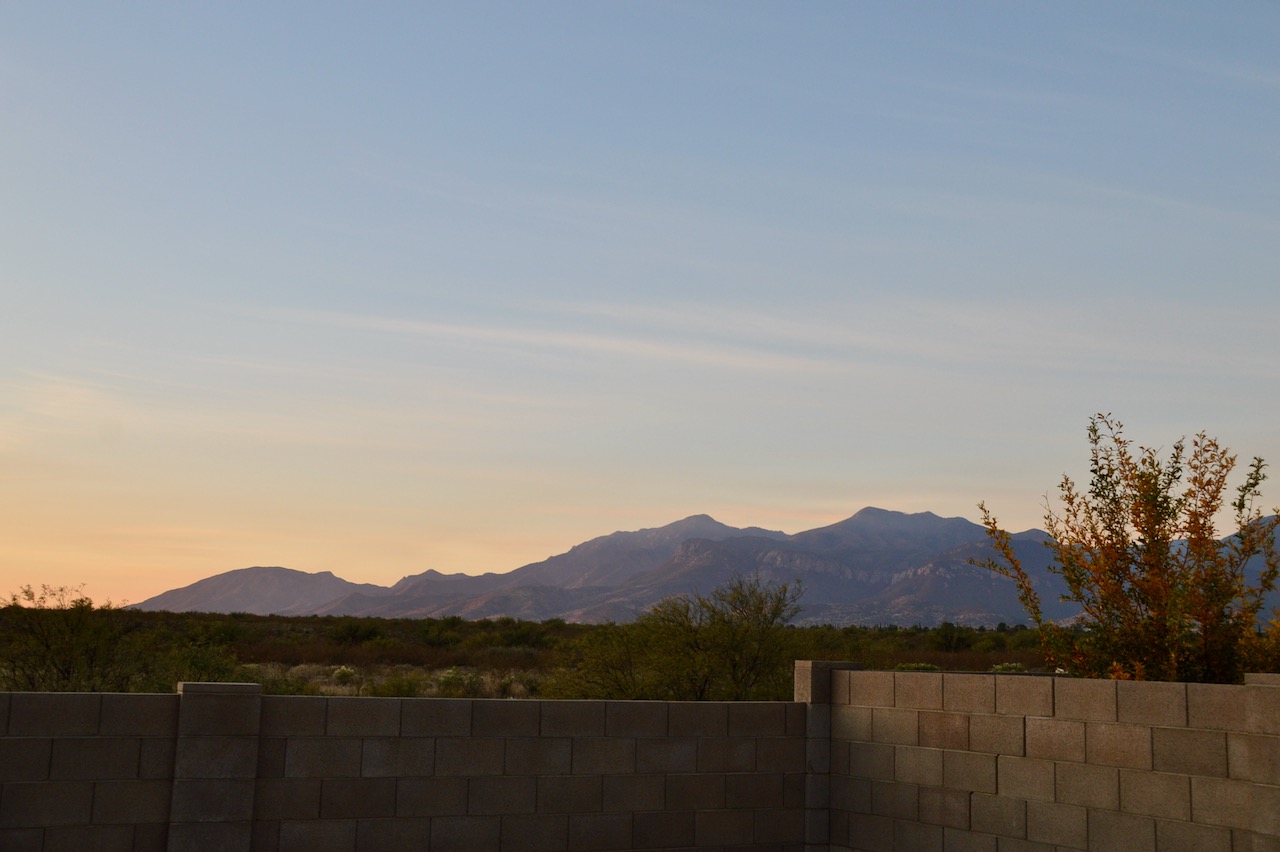 A few weeks ago when I was asked if I would be interested in taking water, gatorade and lemonade along with carb loaded food to the top of Carr Canyon Road to support a bike ride, I told him I would definitely be interested. I totally forgot how much 5 gallons of water would weigh until I woke up Friday morning. It dawned on me that I needed some assistance to load the truck, unload the truck and set up a table for riders to stop and get refueled. I called him to let him know about my mistake.

By Friday afternoon I had someone that could assist me. Saturday morning supply pickup at 6am was going to come earl. Wakup time was 4:30am and that would give me time to feed the hounds, and get ready to leave by 5:30. I had a different plan though for Stella. I knew Heidi would be okay staying by herself all day long if needed but the length of time I would be gone was too much for Stella ... inside a crate or outside in the yard.

I decided she was going with me. She would love the attention she would get, I could keep an eye on her plus Mark had told my assistant Anny that she would have a bloodhound to hug if she accepted the assignment. I did not know that at the time I decided to take Stella with me. 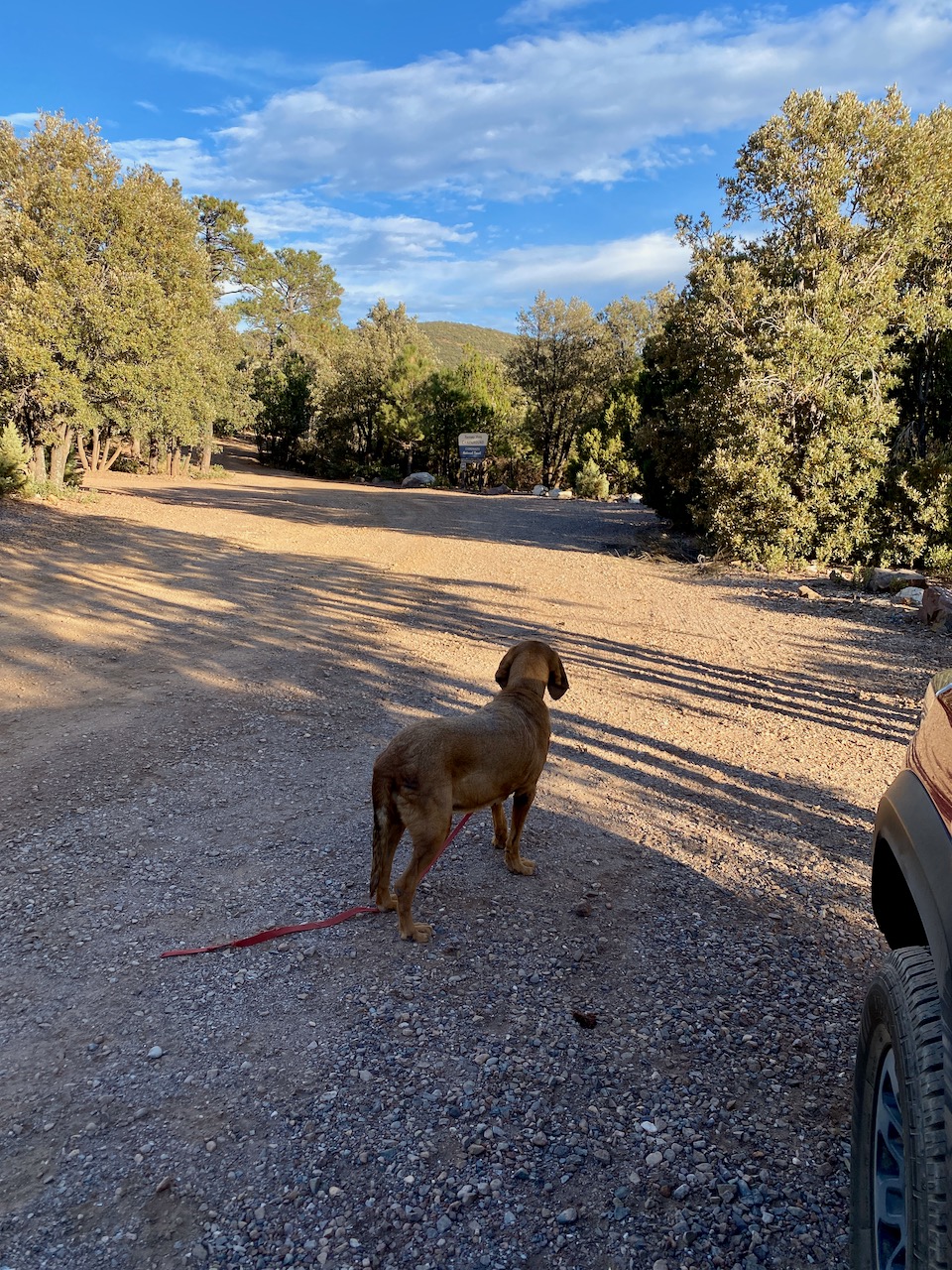 We were at the top of Carr Canyon by 7am, 42° parked just before entering the campground. This pull out was perfect for us to park, set up a small table for the foods and drinks as well as room for any passing traffic to get by that was not affiliated with the bike ride. If you have a Facebook account you can check out the ride and a lot of photos of the last two days at #thegreatchickchallenge in your search box.

Stella wandered on her own WITHIN MY SITE checking out at least a million different scents. I could tell soon after we arrived and Anny had unpacked the truck that Stella was going to have fun day. Little did she know just how many people wanted to pet her. 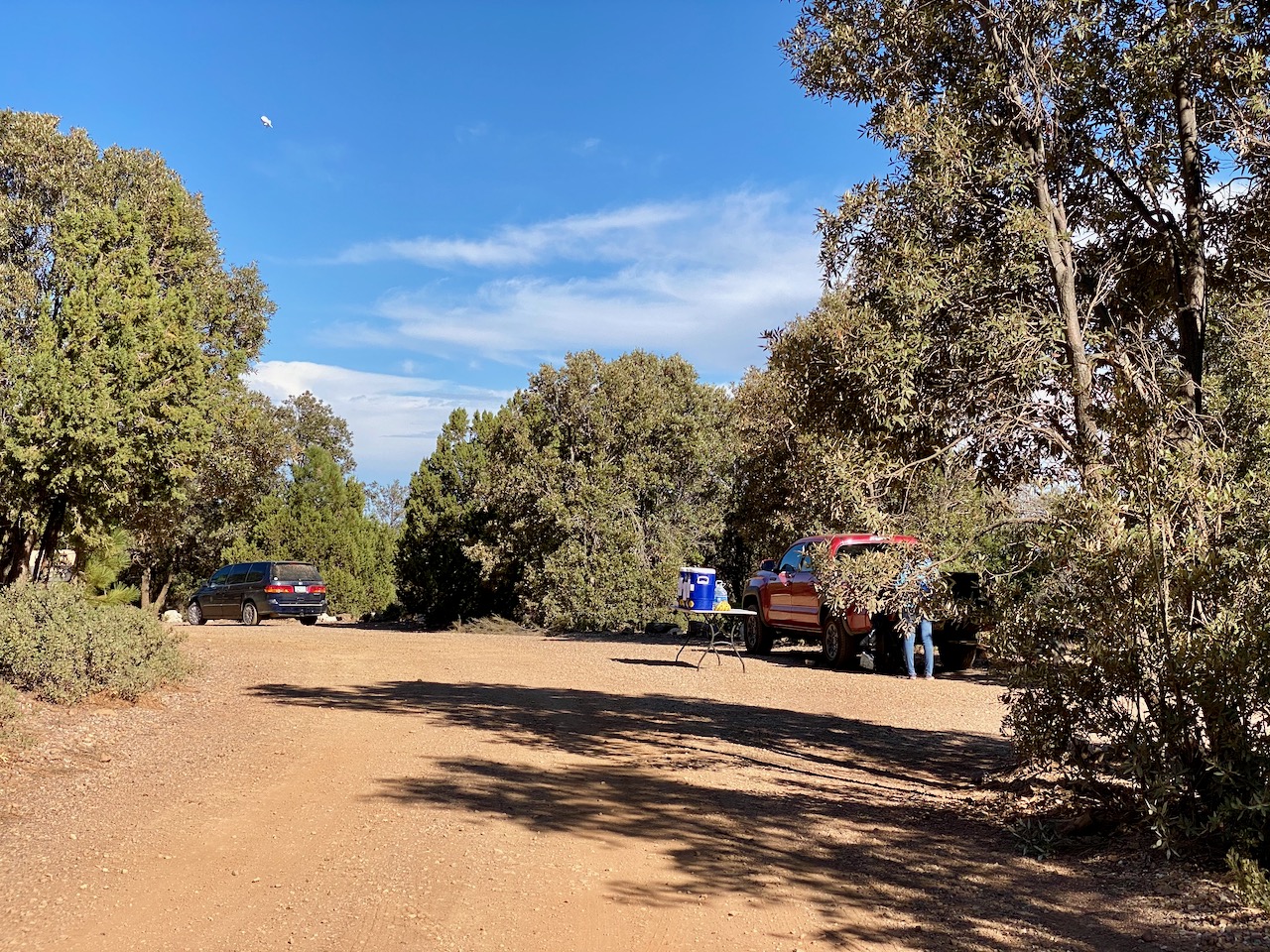 That is us on the right side. We thought it was in perfect view of the riders as they crested a climb and turned a corner to see us. By the time they had climbed the 6 miles on dirt, gravel and washboard rock with no guard rails and 4,500 ft of climbing ... they would have ridden a total of 47 miles of the 70 miles for the first day, climbed to the top of Montezuma Pass, Miller Pass and Hunter Canyon before Carr Canyon. 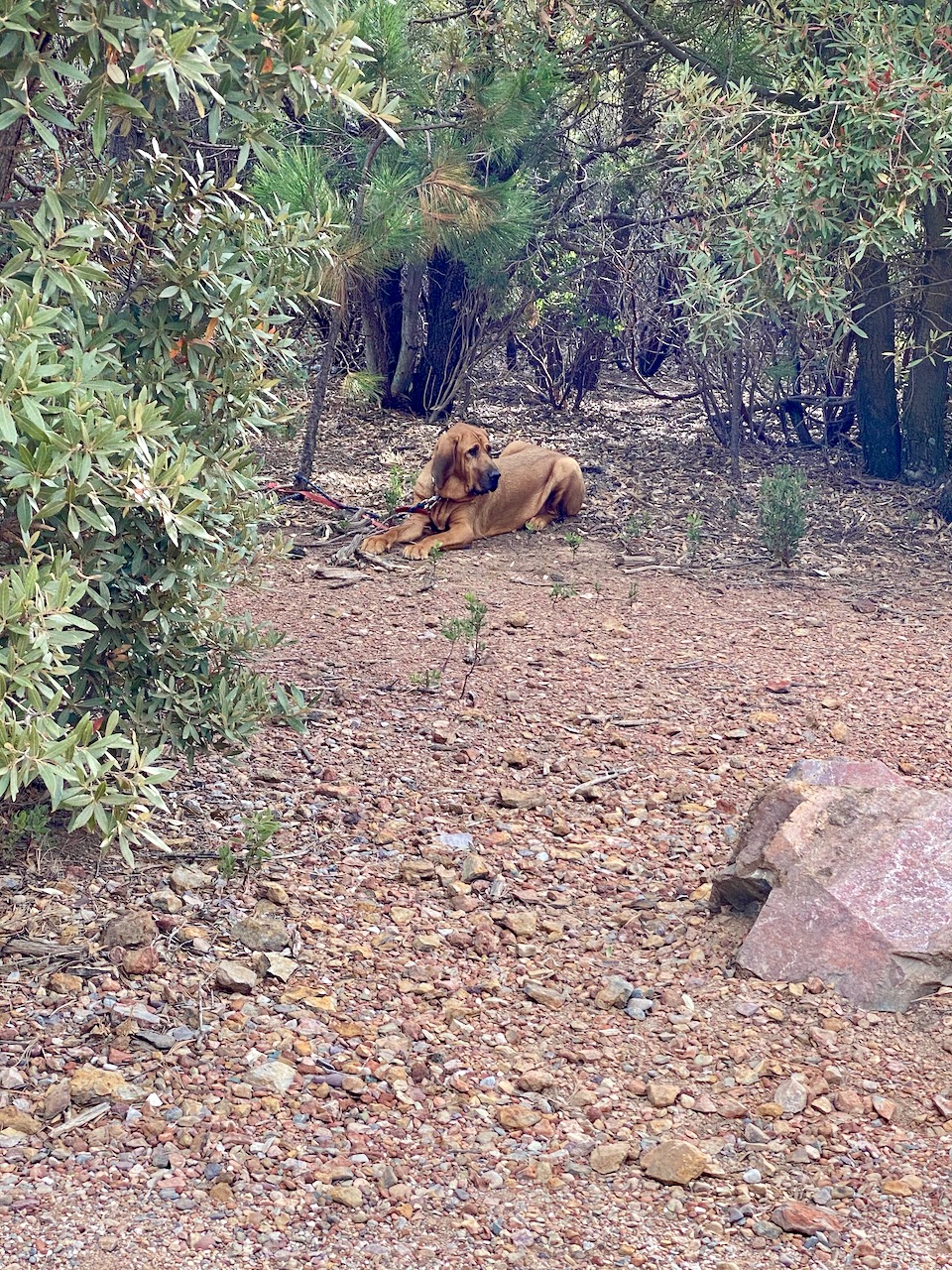 With the warmest part of the camp being in the sunshine, Stella wanted to remain in the shade and on the rocky dirt. I had laid out a Mexican blanket for her but she has never been a fan of blankets, so she lay there anxiously waiting for the first rider to stop at the table. With the group of riders starting their ride from Ramsey Canyon Parking lot at the Brown Canyon Trailhead at 7am, we didn't expect out first rider earlier than 10:30am. 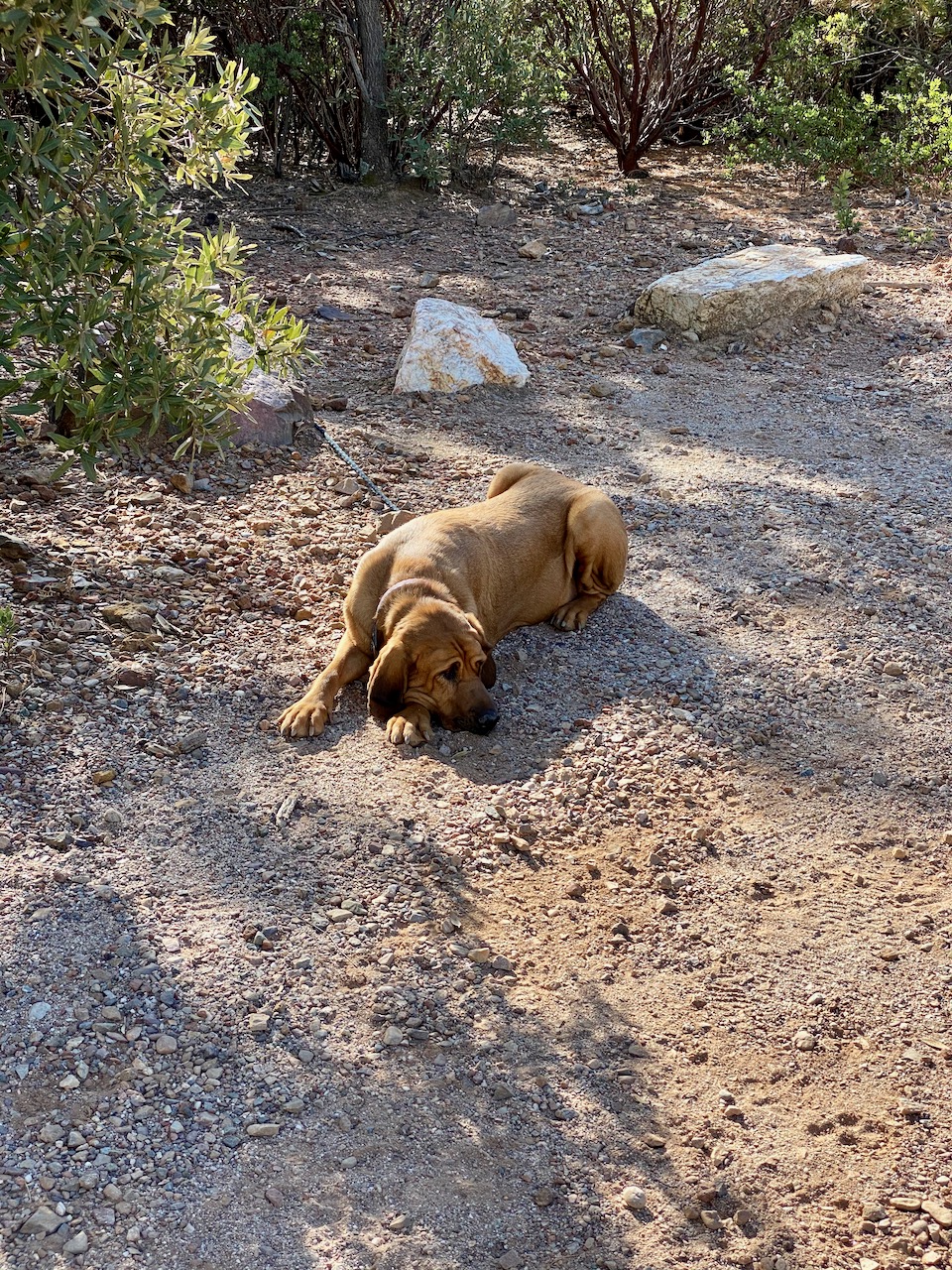 I didn't think of bring my two camping chairs until Saturday night when I was back home and my hip was telling me "you should have taken the two camping chairs to sit in." I could have sat on the tailgate I guess but standing out away from the truck in the sunshine was the warmest of all. A camping chair would have been nice t sit in for 15 minutes and then get up and walk around. 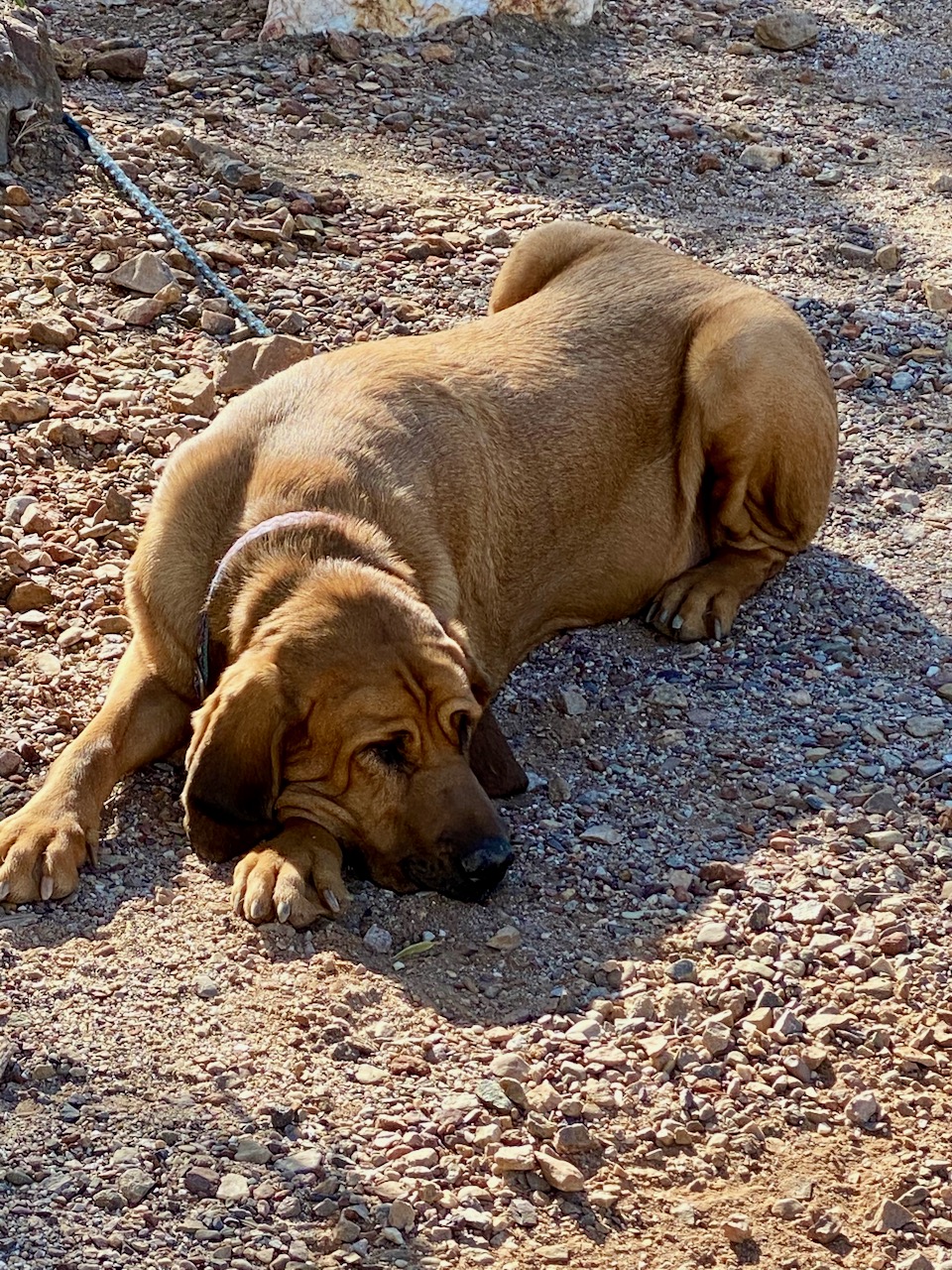 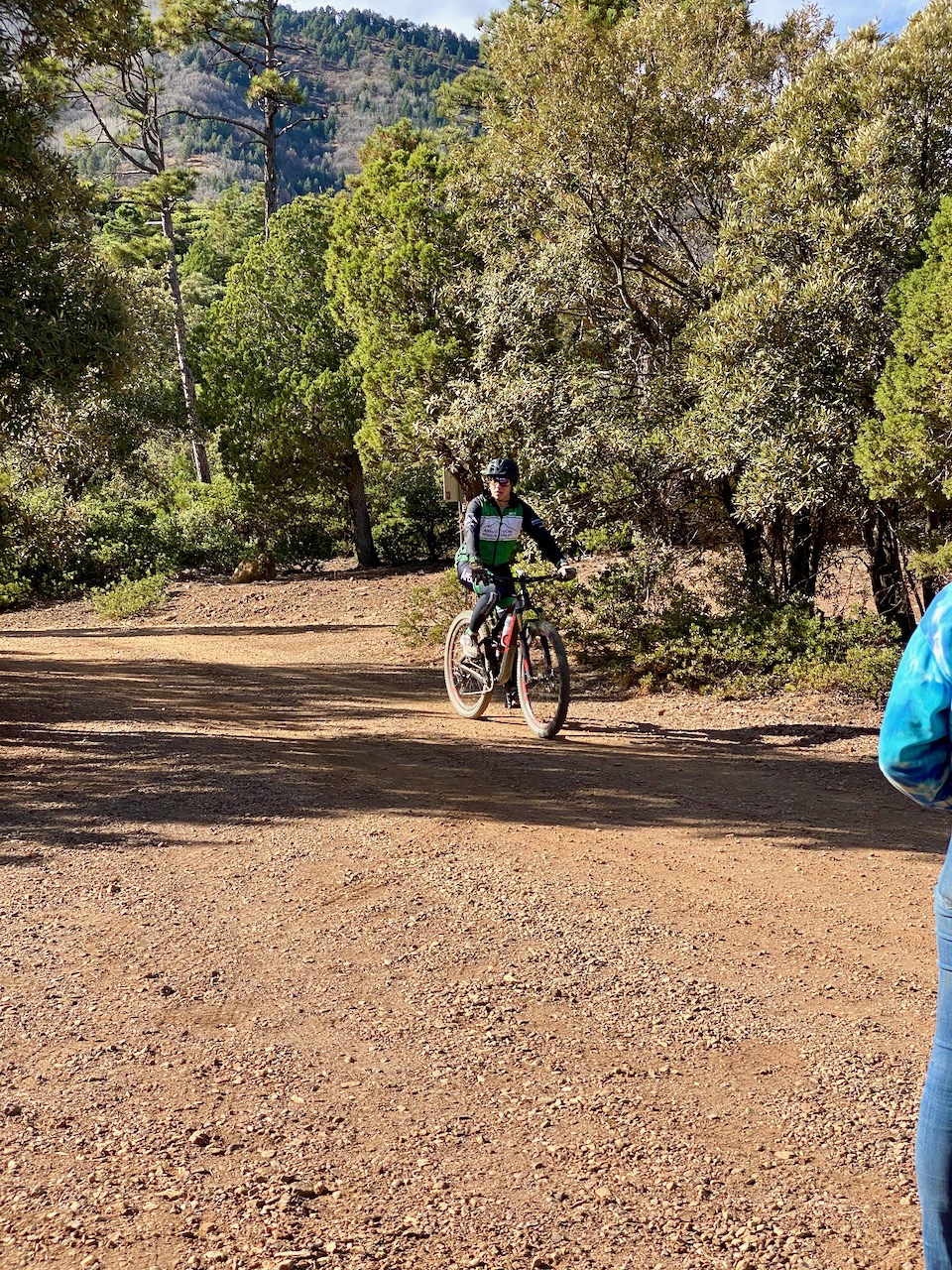 Our first rider appeared sooner than we had estimated. The mother of 4, started riding an hour earlier than the group did in the dark because she was going to attempt to finish the two day requirements in one day of riding ... 150 miles, 4 major climbs, 2 laps around the Lower Brown Canyon Trail and 14 Repeats from the parking lot to the top of Ramsey Canyon. When she stopped next to the table she was not even breathing hard and I could see the two day requirement in one day was a possibility for her. 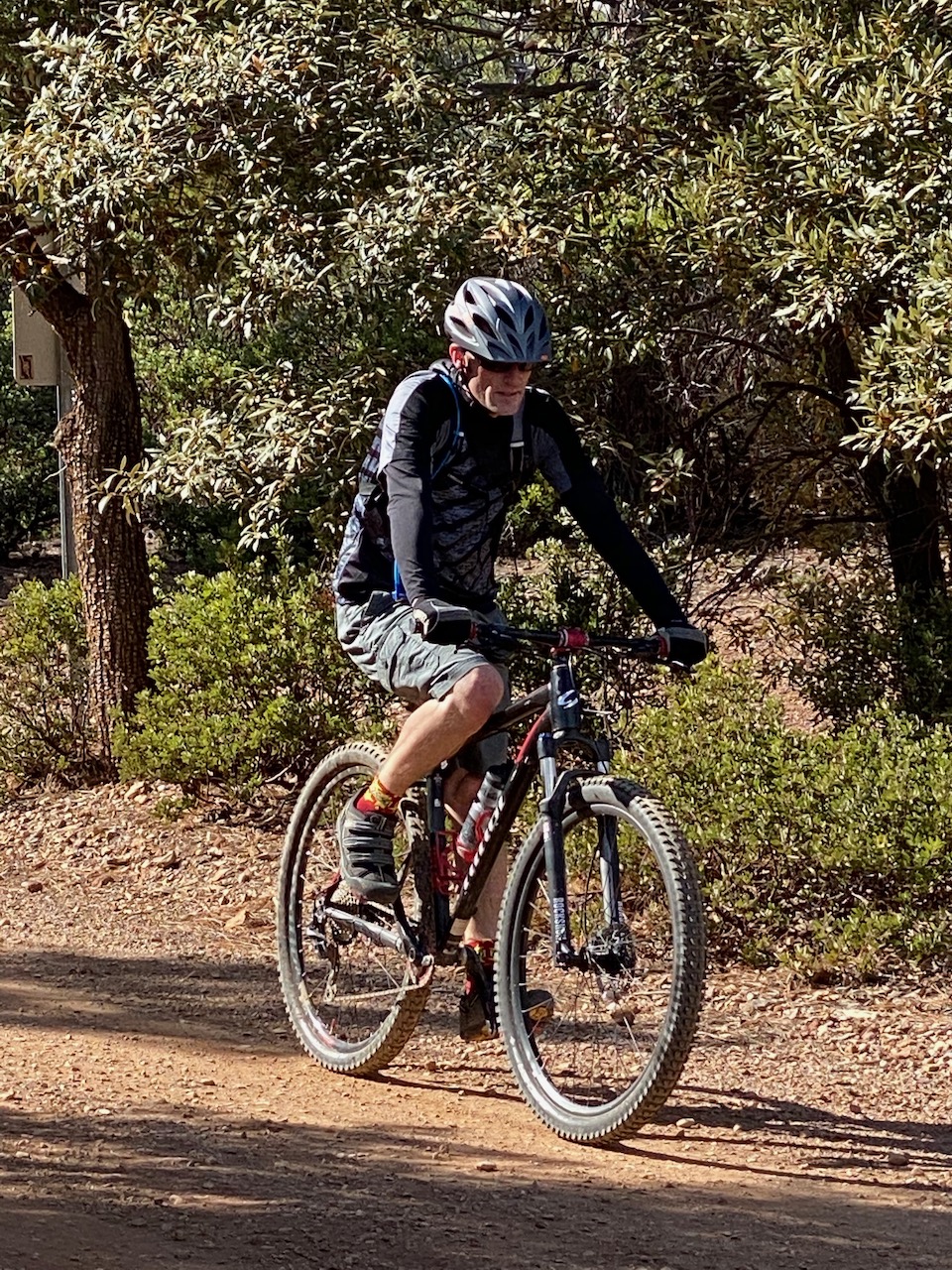 Most of the bikes that made it this far were mountains with "one by" chain rings, meaning that small sprocket where the crank arms connect to the bottom bracket. That is such a small chainring and only one instead of two or three, matched with a large sprocket in back makes for a gear that is at least 1:1 ratio if not more. That bike had 29" wheels instead of the normal 27.5", making the ride more comfortable. 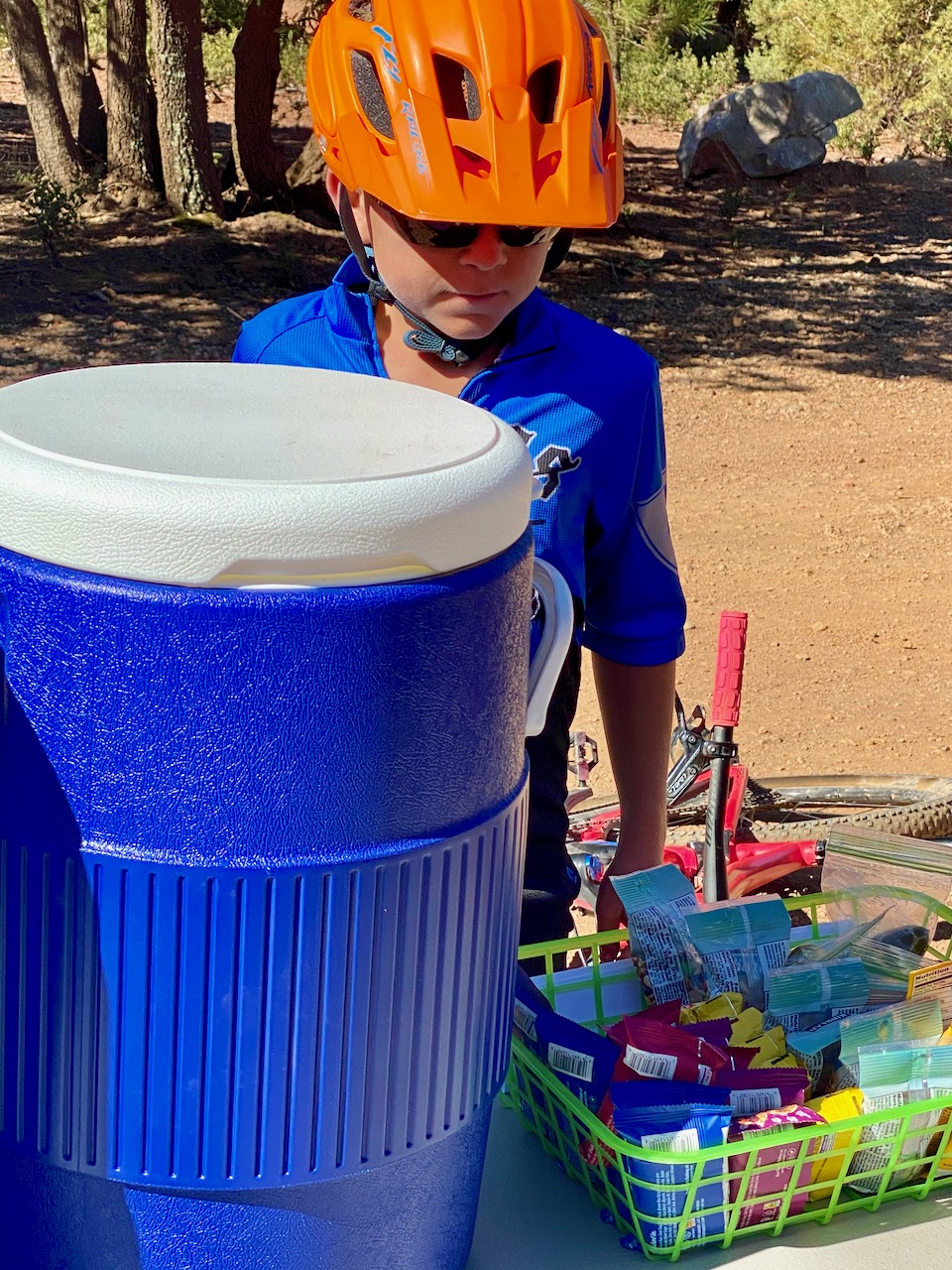 The man riding with the rider that had the 29'er above ... told us to be on the look out for his 13 year old son who was following them riding with a group from his school along with an adult rider. Jackson (Jack) showed up not long afterwards with kids in his school but much older. Yes, that is right, this young rider had ridden all 47 miles, including the four major climbs for a total of over 8,000' of climbing up to this point.

If you remember last June I drove up Carr Canyon, check out the roads this young rider conquered here.  and in the past three months have taken different vehicles over the top of Montezuma Canyon ... will Jack climbed both of them before noon on Saturday and still had to descend the 6 miles to the bottom over rough road. It took me 45 minutes to do that in a 4x4 truck. 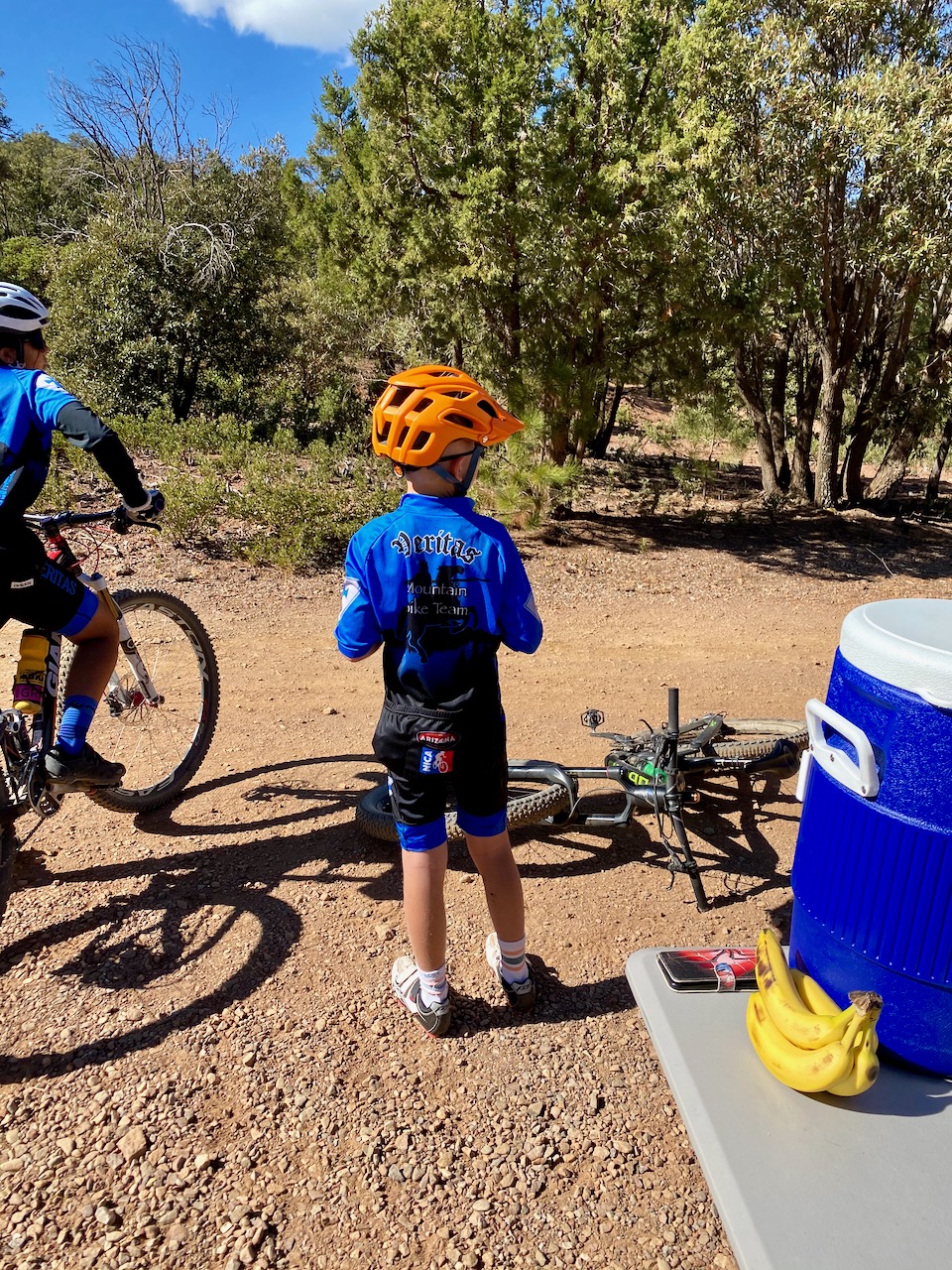 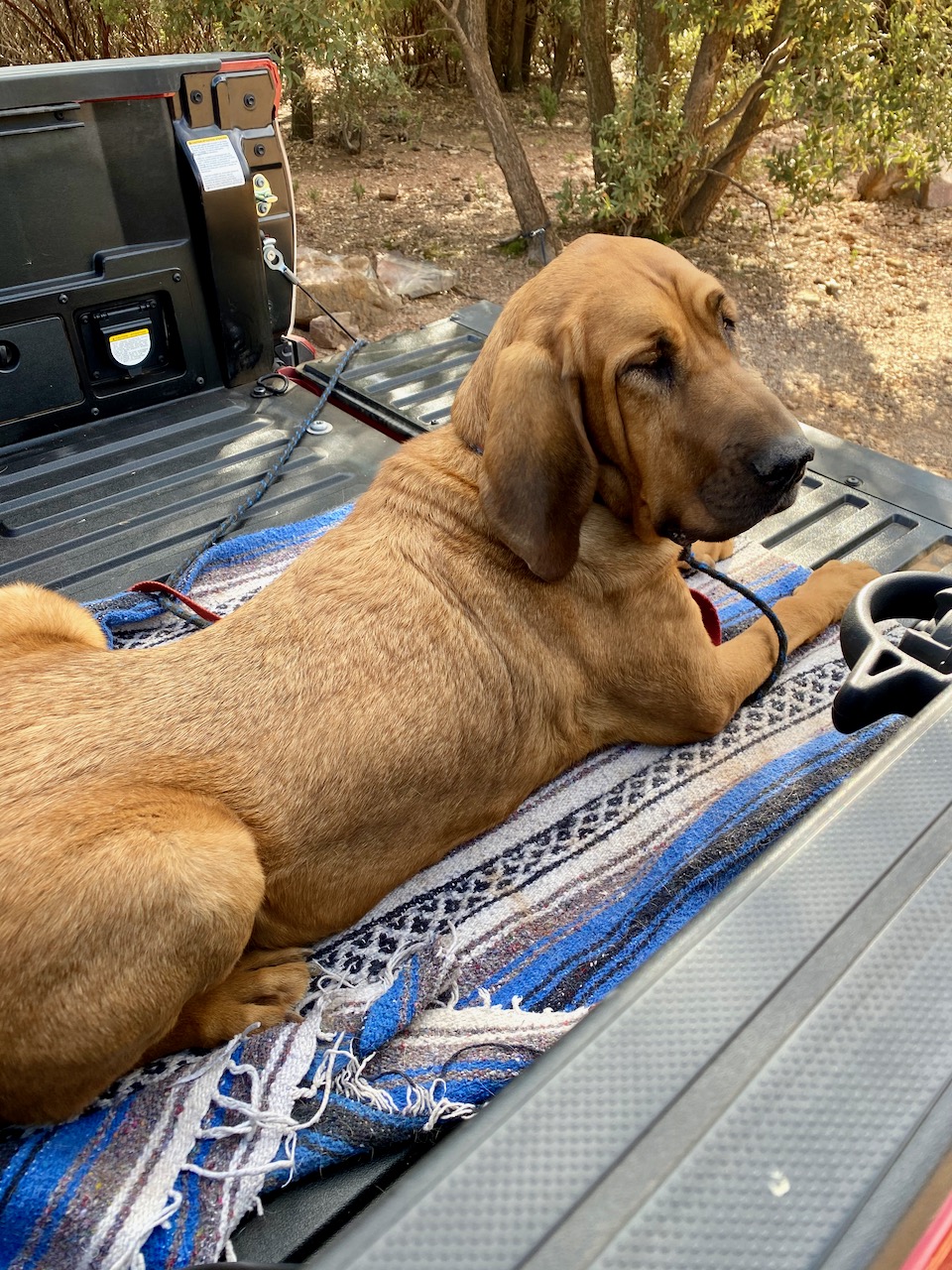 As I turned to see what Stella was doing with all the riders starting to show up, she had stood up and put her paws on the tailgate. Anny wasn't taking any chances of me lifting something heavy so she helped Stella get up in the back of the truck for some relaxation. 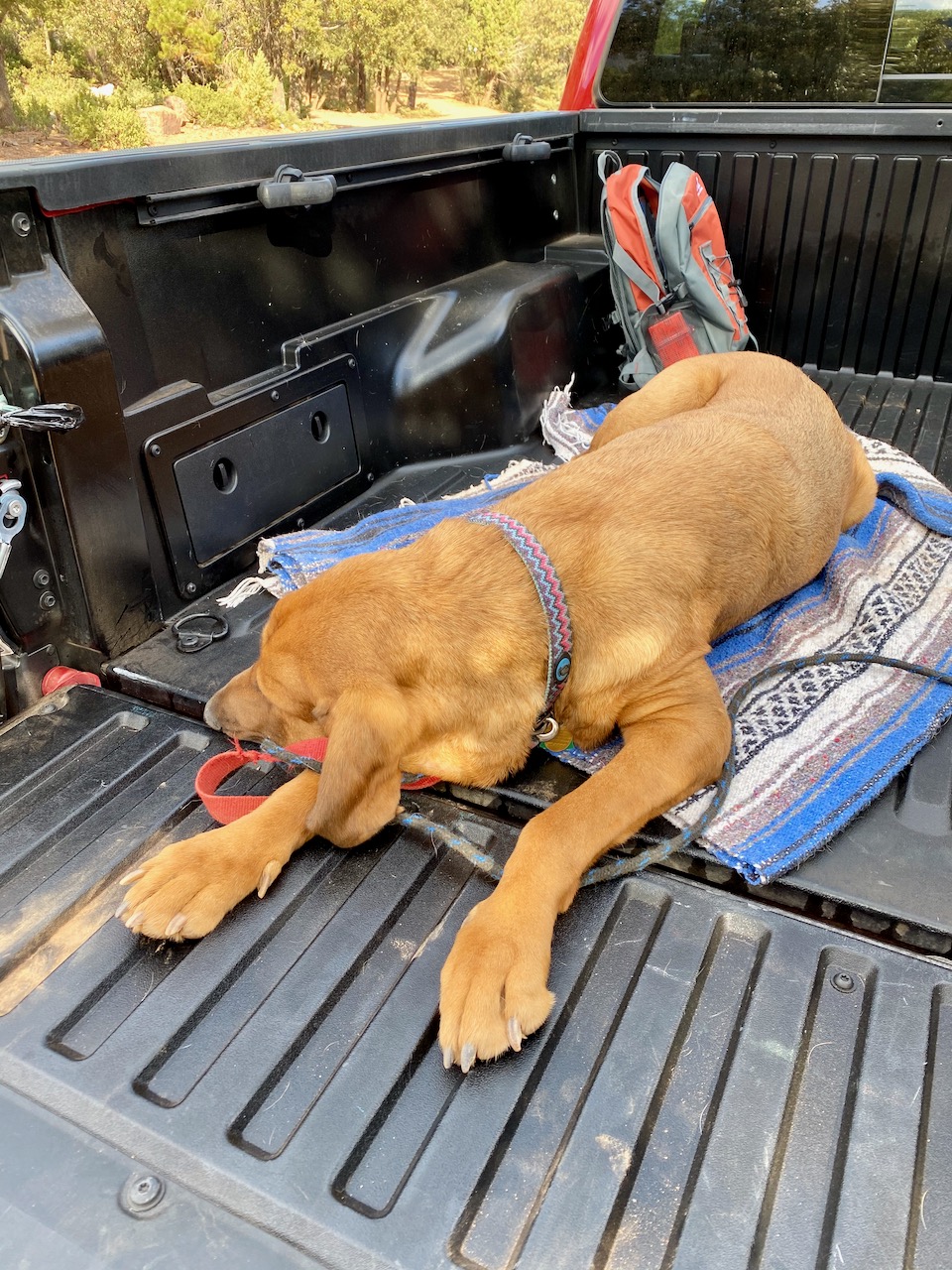 She even found time to take a nap between riders. 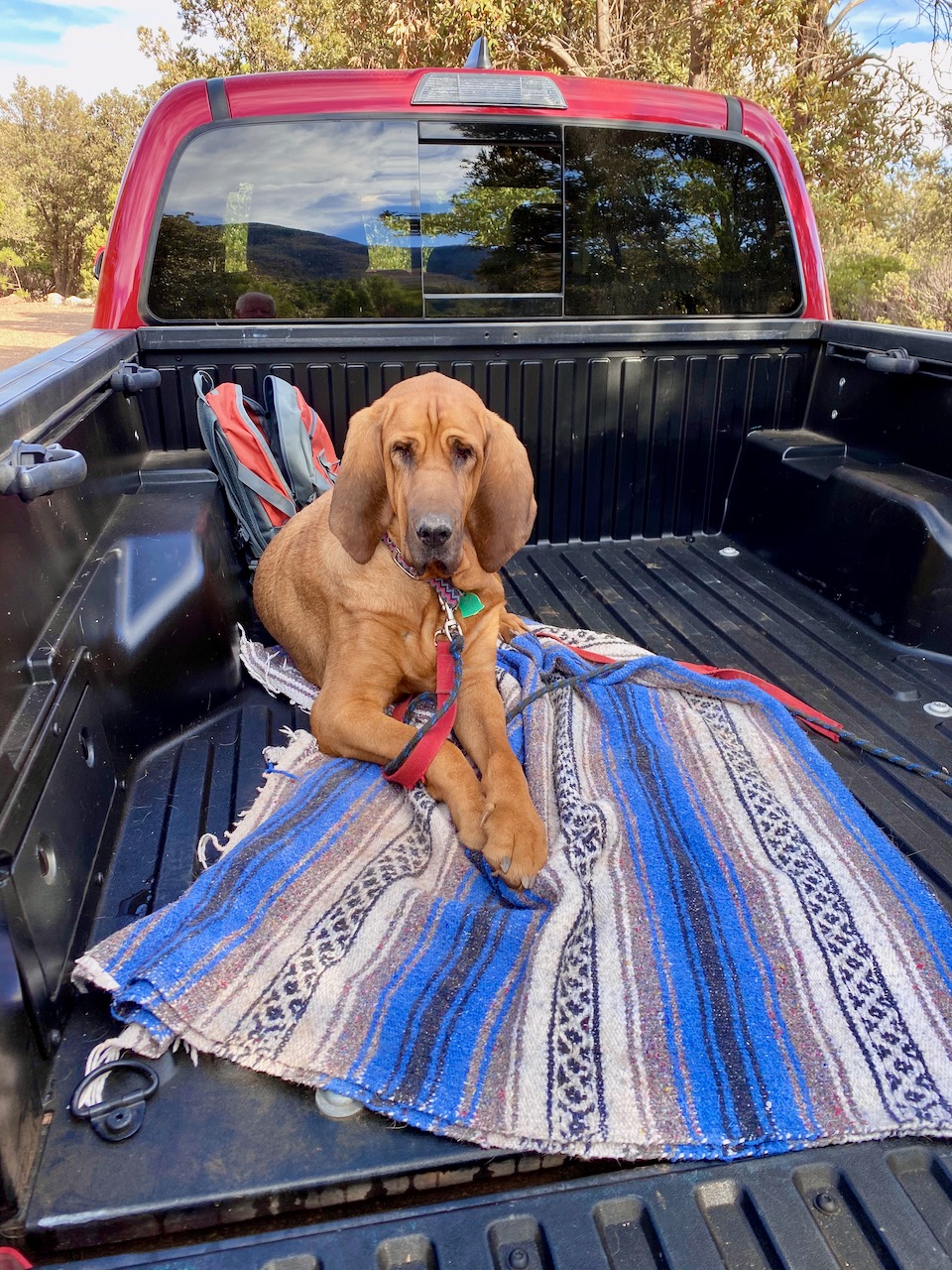 You will never see her much more relaxed than this. She loved all the attention she was getting. 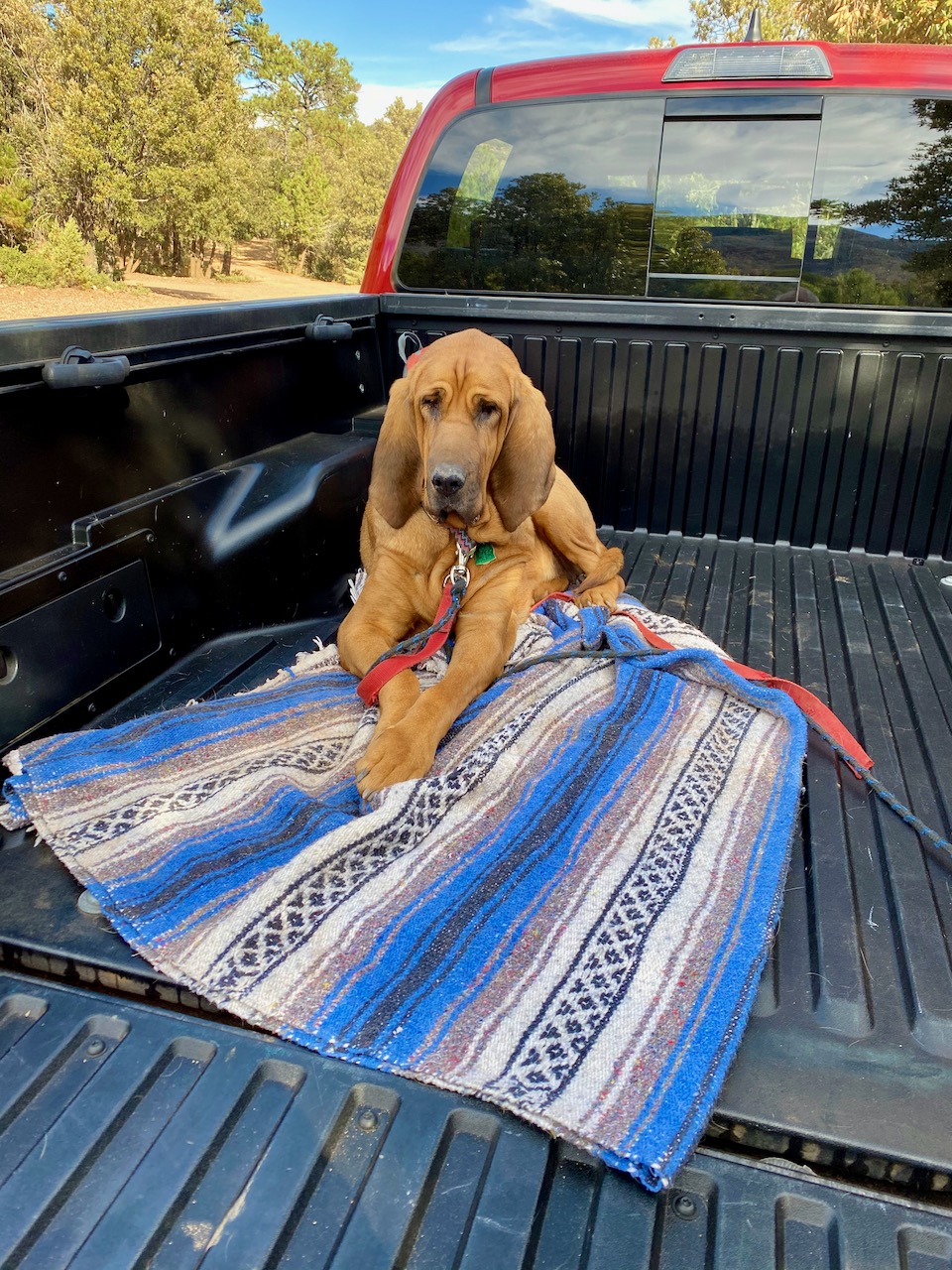 We stayed a little longer than our 10am-1pm assigned time. We wanted to make sure that we didn't miss any riders that expected us to be at the top of the mountain with food and water or gatorade for them. On the way down around 1:45pm we stopped for 3 different riders on their way up with 3-4 miles still to go to the top.

We headed back to the parking lot to unload our supplies and talk to any riders that we had seen at the top of Carr Canyon and had finished their two laps around Lower Brown Canyon Trail. 70 miles done for the day and 80 to go on Sunday. 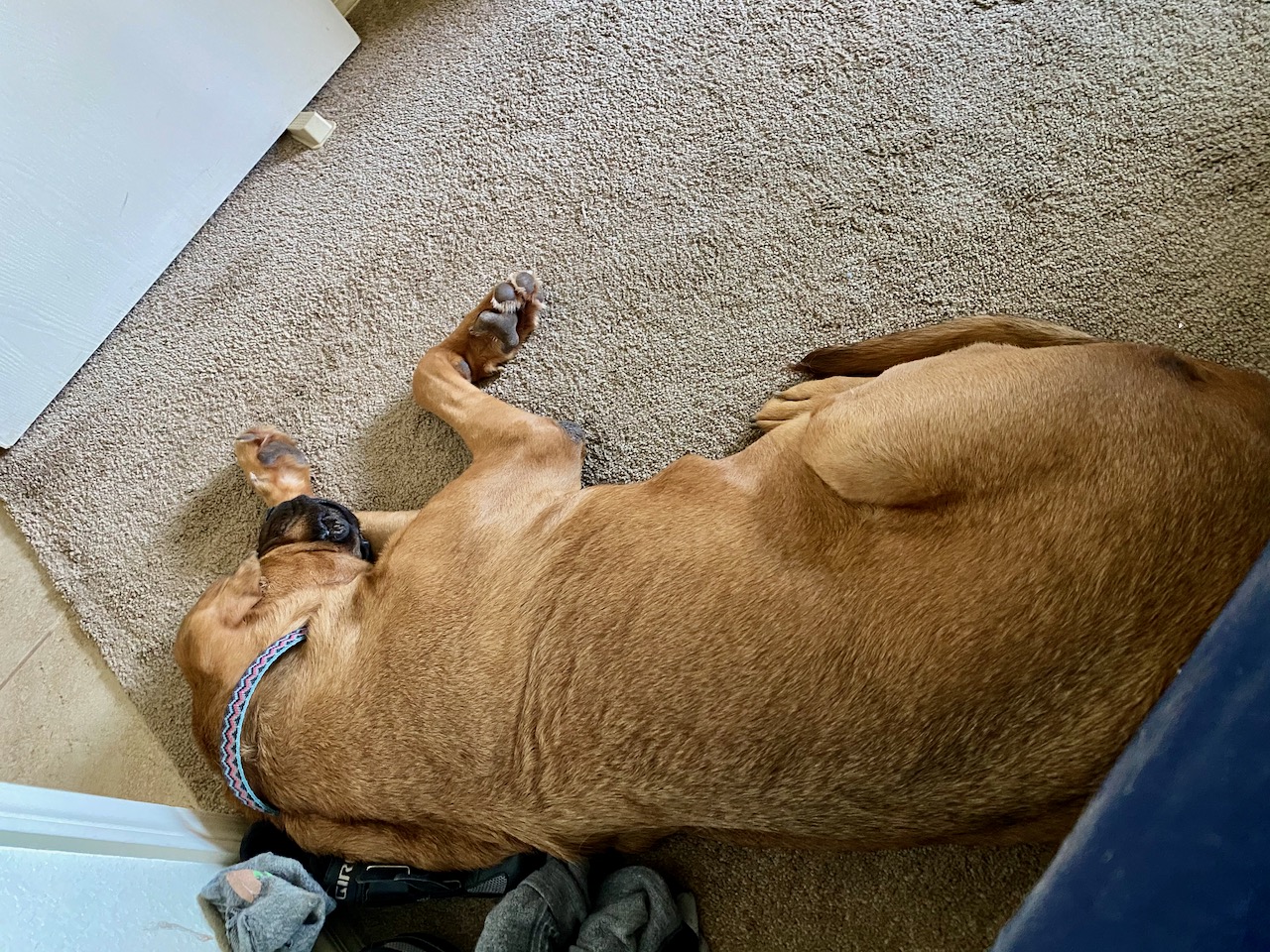 I was not the only one that needed a nap soon after we got home. It wasn't even 4:30pm yet and Stella had passed out next to my bed. She had a rough day getting all kinds of attention. Later Anny told me she had snuck some pieces of beef jerky to Stella and I let her know that giving food to Stella made it a 100% friendship in Stella's eyes.  "You are friends for life now" 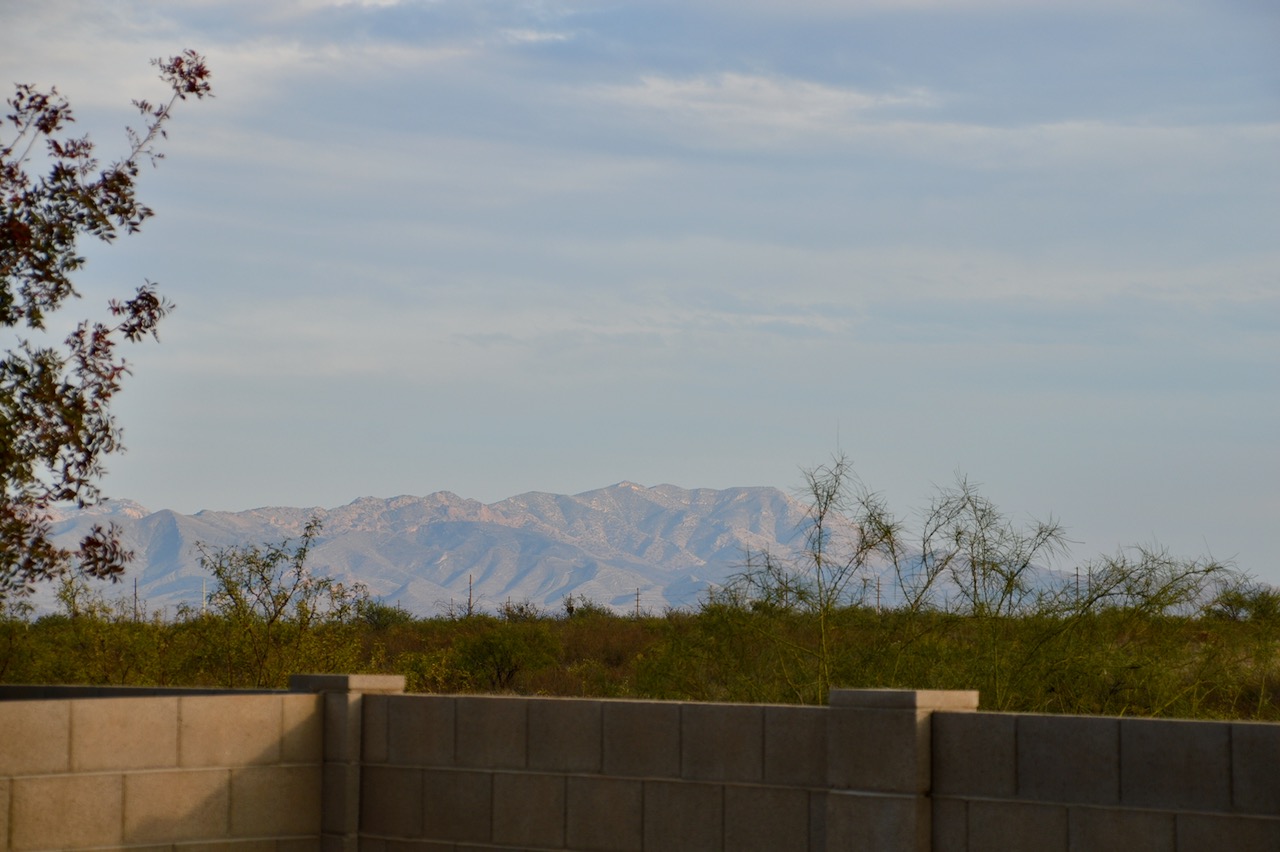 I was not assigned to do any kind of support for Sunday. I knew the ride started at the same parking lot we were at on Saturday morning. Soon after our morning hound walk, where Heidi joined once again, I drove out to see how the "14 Repeats" were going ... it a steep short hill climb and 14 times in a row was going to be a gut buster.

I had plans on Sunday of meeting a friend for some hiking. With the Brown Canyon Trail filled with mountain bike riders I thought it would be best to head the opposite direction and check out the San Pedro River trails again. We hiked for over 4 miles in a little over 2 hours. I can get a lot of good walking in because it is generally flat. Someone asked if I took the dogs but there would be too many distractions ....

On our hike we ran into two different dogs, one rude mountain bicyclist and three horses. That is too much to keep Stella under control. Plus Heidi would never be able to finish 4 miles or even a mile. She is usually dragging at the end of our morning walks which is roughly .55-.60 of a mile. 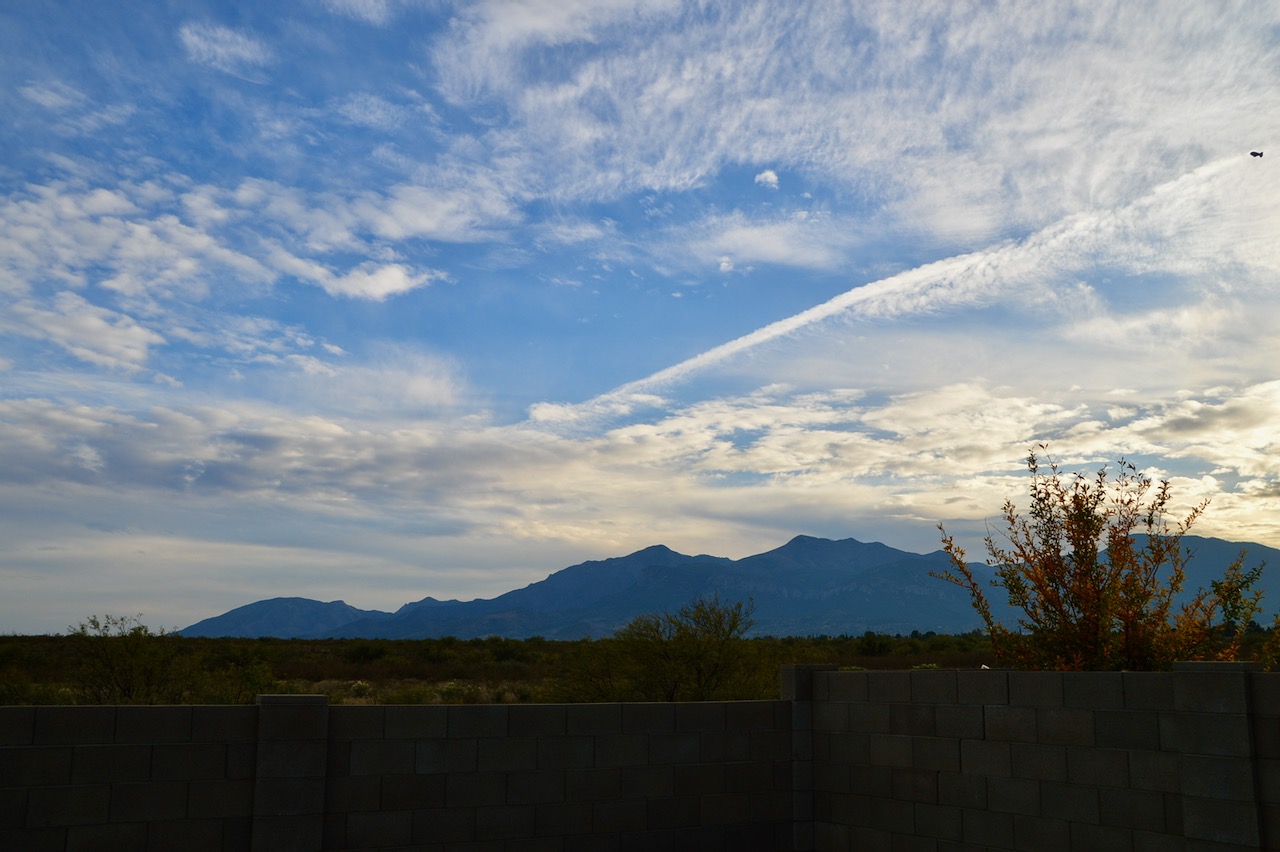 We had a nice visit, some good food at Jersey Mike's Subs and over four miles of walking. 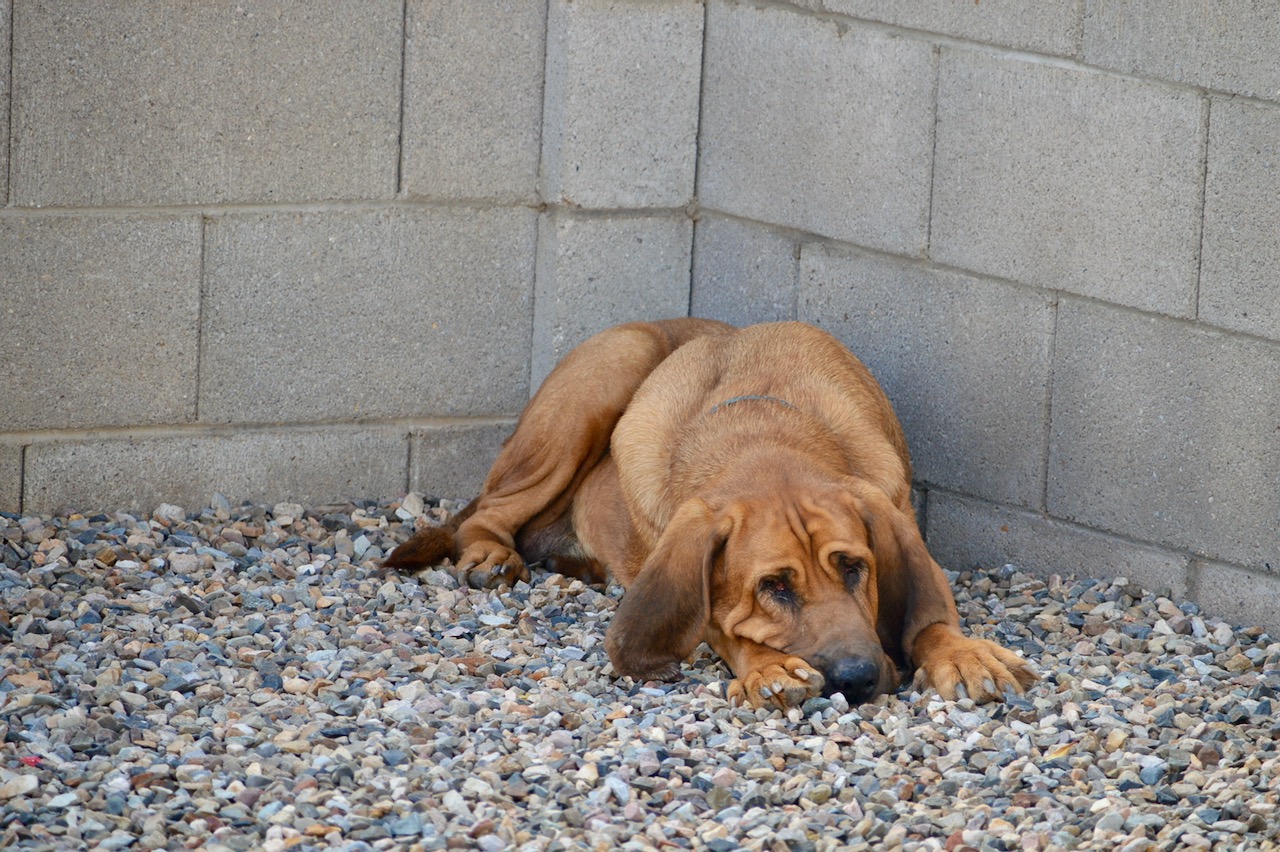 As I was preparing my backpack, water, trekking poles from the truck to the car this morning, Stella knew I was going somewhere and she was pretty sure she would not get to go today. She found a shady place in the corner of the yard and was asleep by the time we left. Heidi kept her company for the next couple of hours. I still have a hard time putting her in a crate when the weather is so nice outside. The patio door though was shut and locked this time, so my vertical blinds were safe.

I met a lot of good people this weekend that are into bicycling. We traded a lot of stories, talked about some past injuries and future rides. I see a busy schedule ahead once I get in better shape. My friend also told me of some fantastic hiking outside of my area that I would need to check out. I've added that to my list of places to go. I still want to take a day trip to Ajo and back ... the hounds will be included in that trip.

Hard to believe that not one football game was watched on Saturday. I'll watch the IU game later where they cut out the commercials and halftimes. A 3.5 hour games suddenly turns into just an hour. Imagine that !!!

I rode almost a 100 miles this week and feel fine. I plan on riding the same this coming week with Monday as the first day of their Strava week. I'll take off two days at least, maybe three depending how I feel.

For those freezing or wondering about cold November weather ... I not only forgot the camping chairs to sit in yesterday but my ball cap. About 6pm Saturday I realized my head and face were sunburned, extremely sore and I was saved by packing Aloe Vera Gel on my head and face .. things were much better this morning.

Sorry for the lack of photos, sometimes there is too many things going on to take all of them.