Rain And Windy For 48 Hours 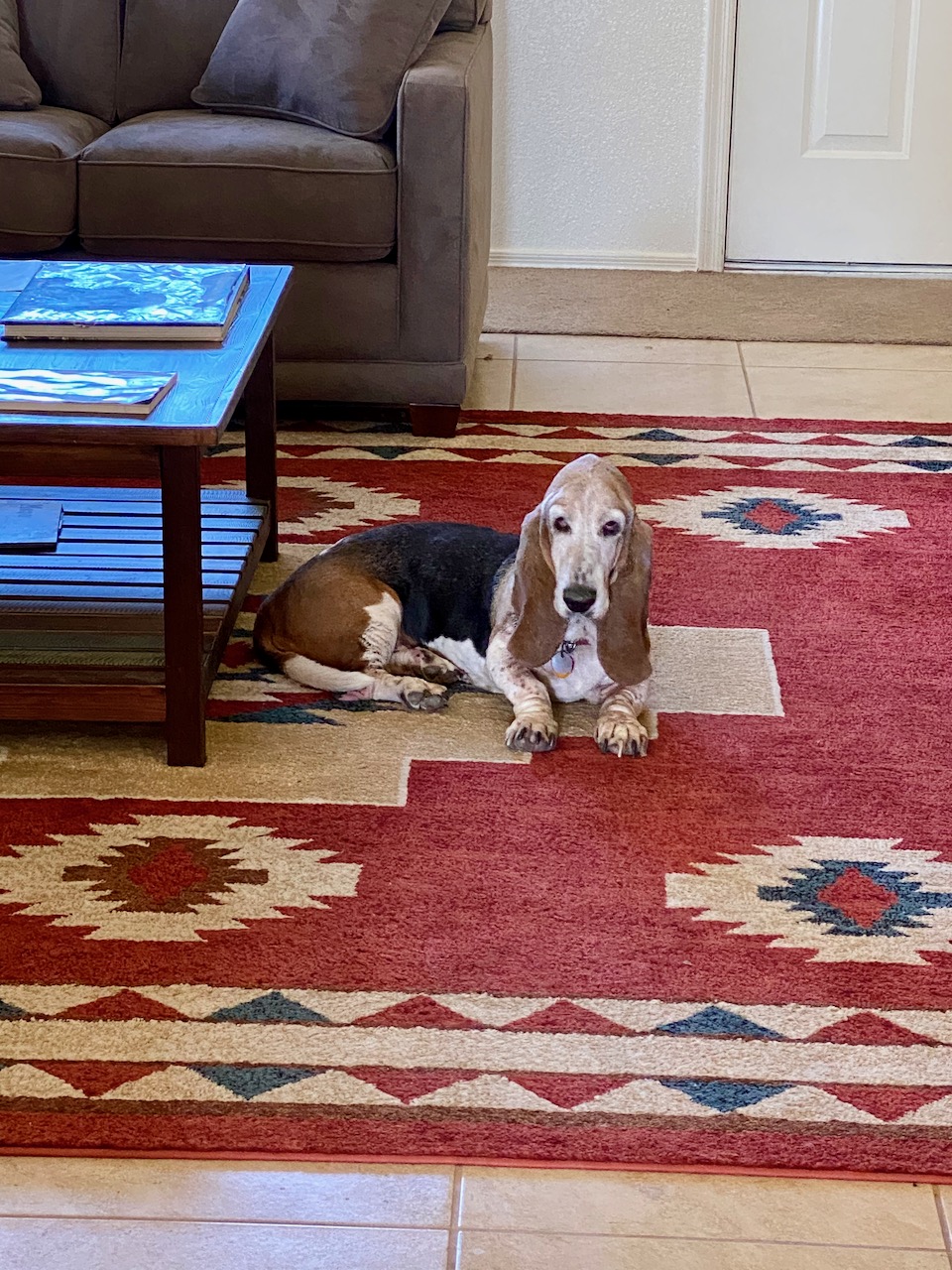 I knew rain was headed our way by noon on Tuesday so I went out on my bike two days in a row and covered a little over 28 miles on each ride. I've gotten spoiled by SE Arizona weather and although it will be my first winter here and much more warmer than back in the 'the tropics' of Southern Indiana, I can't wait for spring and then the hotter than hot summer. I did plenty of research before making the move so I know what to expect and the thing is, the hounds can take their walks and I get ride my bicycle outside year round. 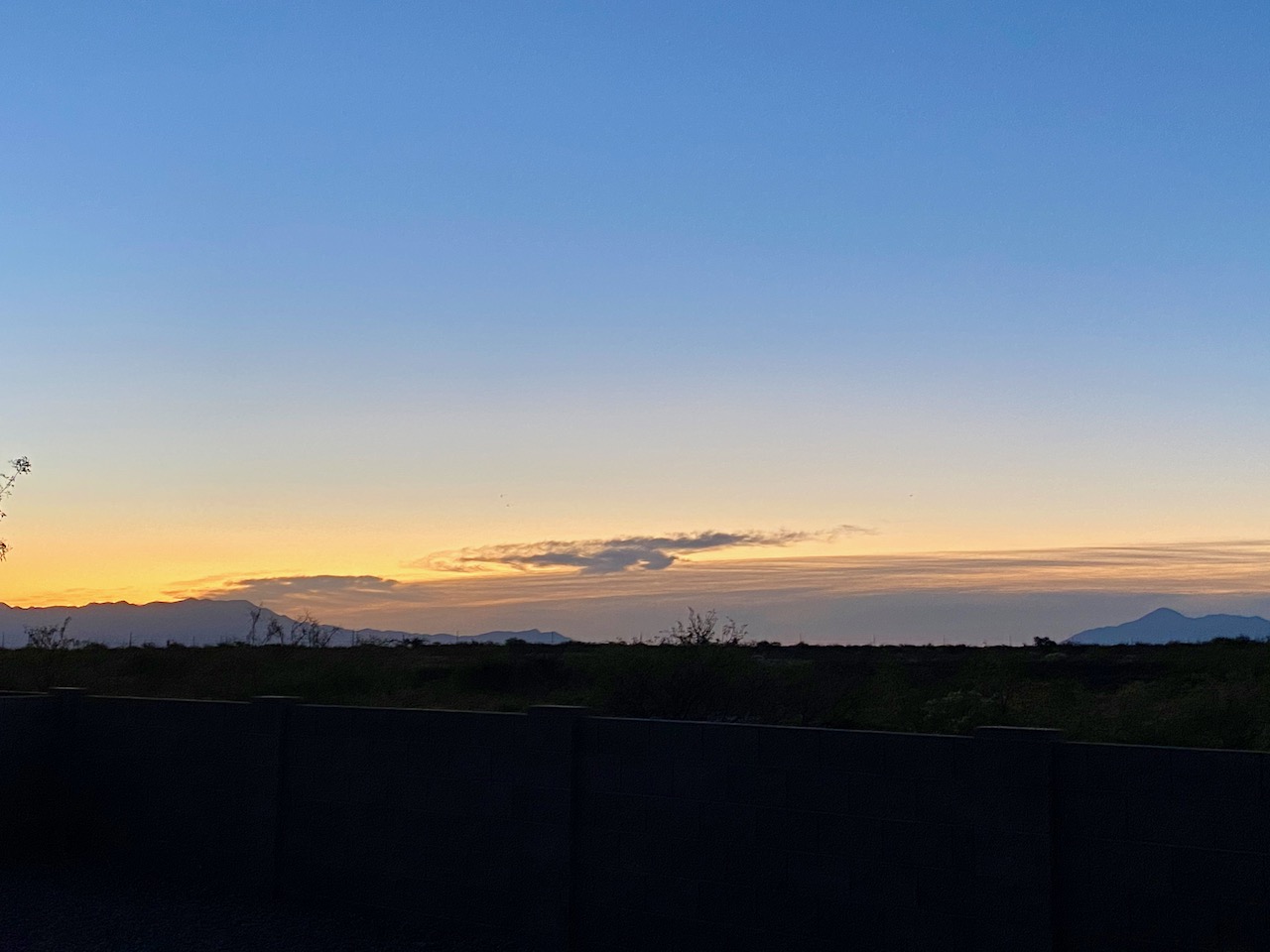 You would have never known on Monday what would change so drastically by 12:30pm on Tuesday. About the time I thought the rain would stop, it was start again, or the wind would get stronger. The temps were also dropping fast. I found out that Heidi doesn't like the rain here any better than she did in Indiana and even Stella had no urge for the morning walk when the sidewalk and streets were wet. They both slept late or went back to bed as soon as the morning kibble was eaten. 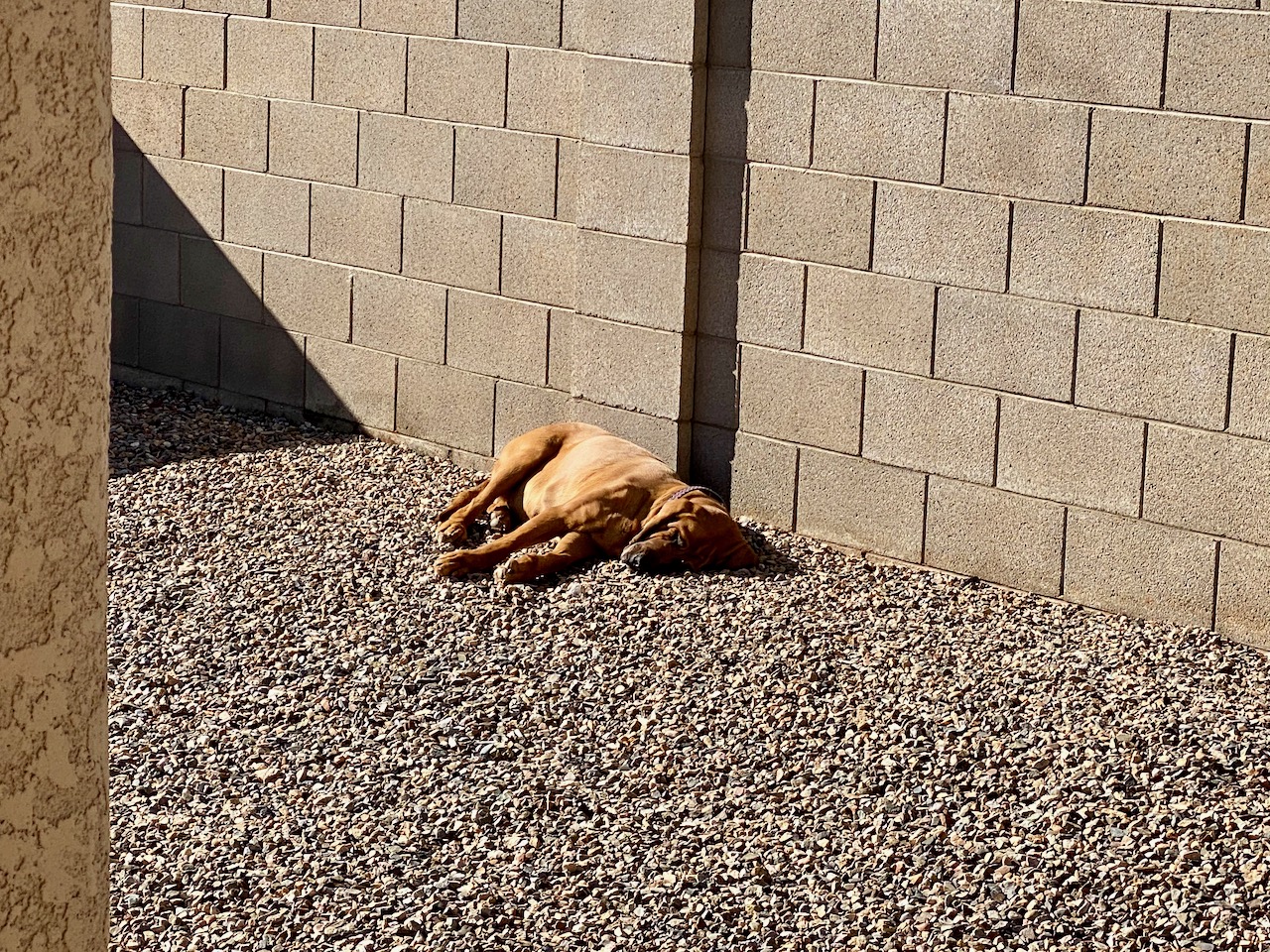 Seeing Stella relaxing in the backyard on Monday I decided to leave them both outside while I took my late morning bike ride. Temps were barely over 70° and I wasn't planning on being gone more than a couple of hours. It is just amazing what she does once she figures out that I am not home. It freaks her out most of the time. She spent a lot of time trying to dig under the patio thinking that could be her escape route. She no longer stays outside when I am gone. 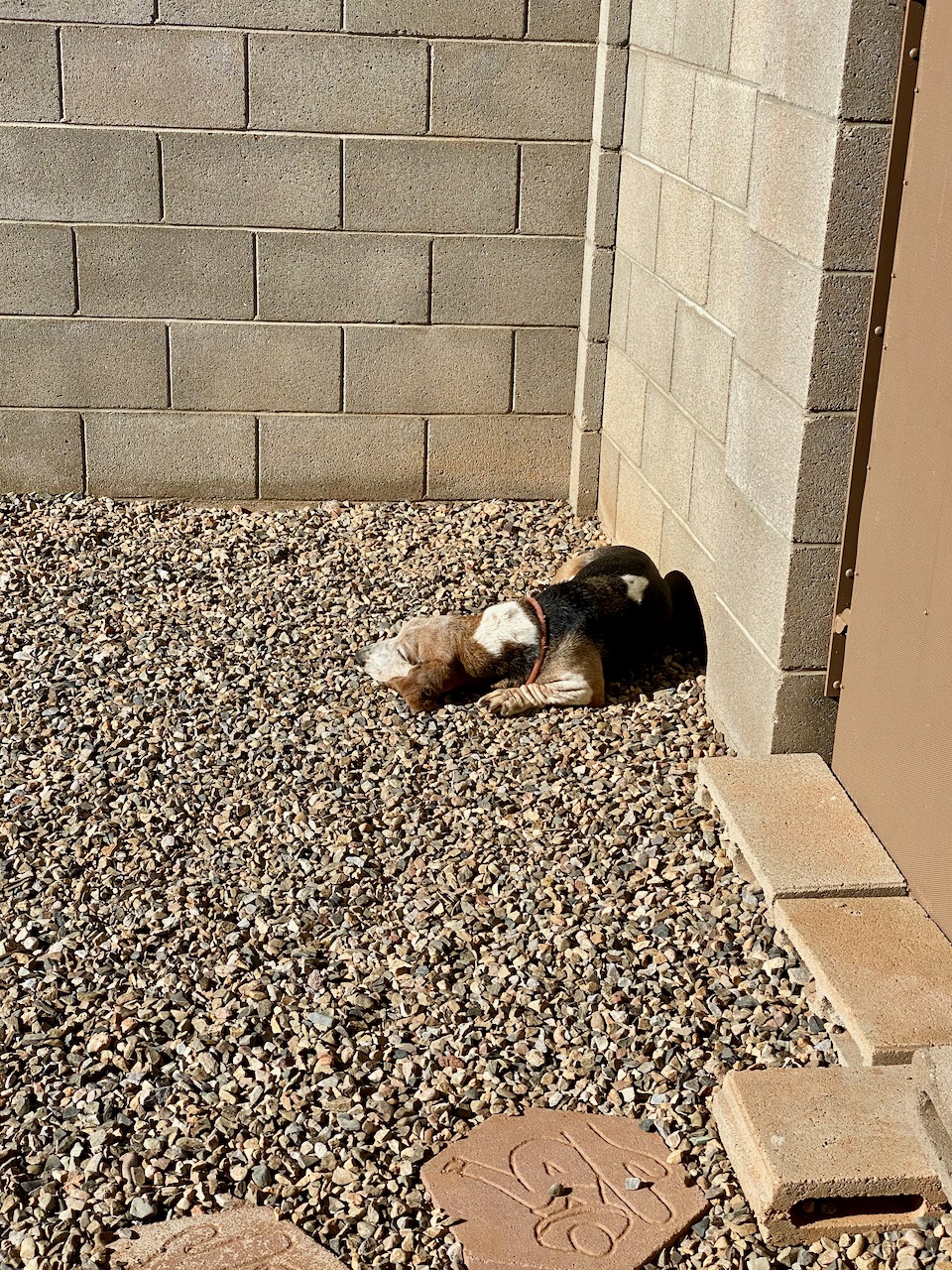 Heidi on the other hand is just like a cat ... totally independent and nothing bothers her. She is the perfect house dog and can be left alone inside for many hours at a time. 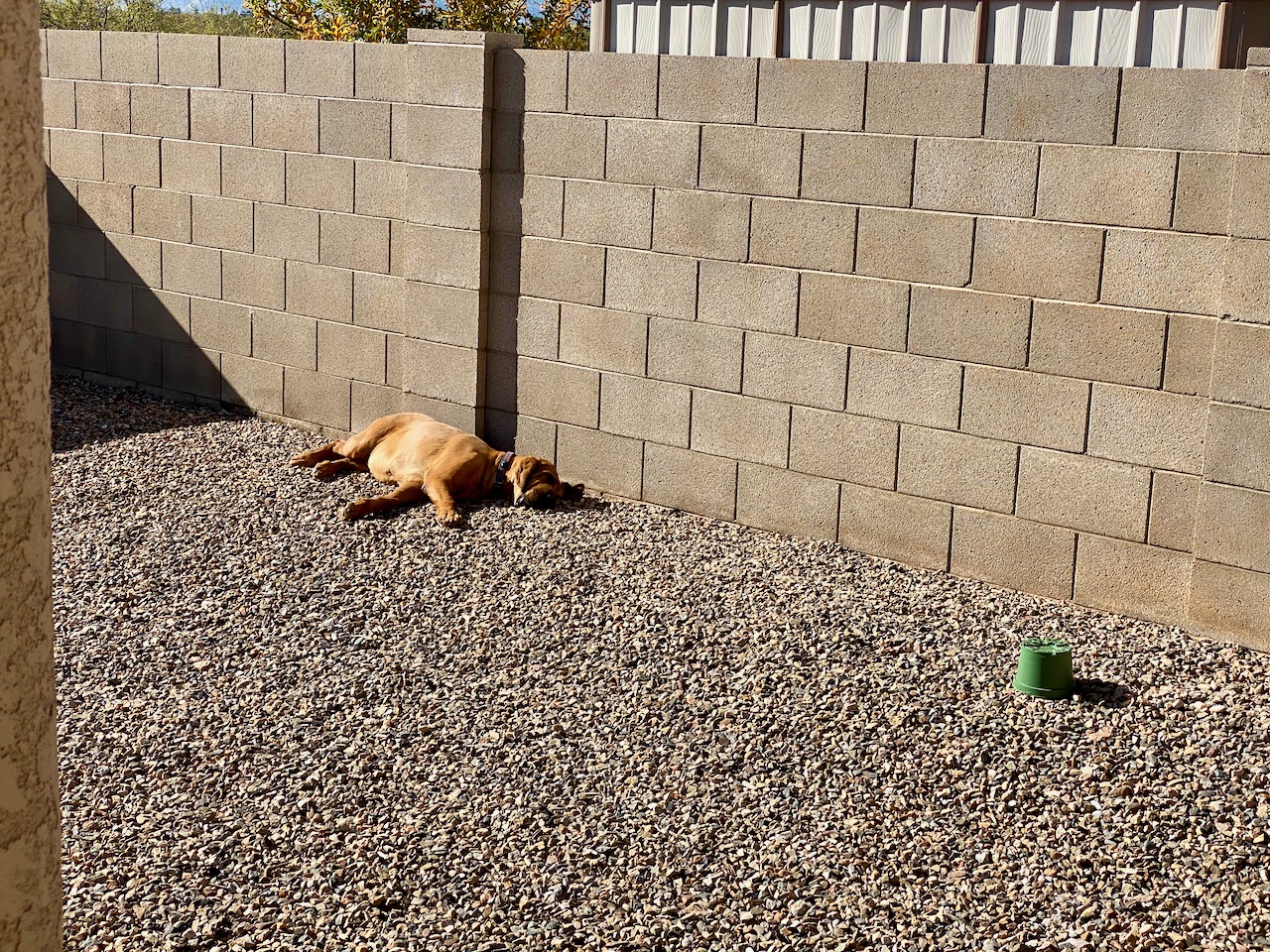 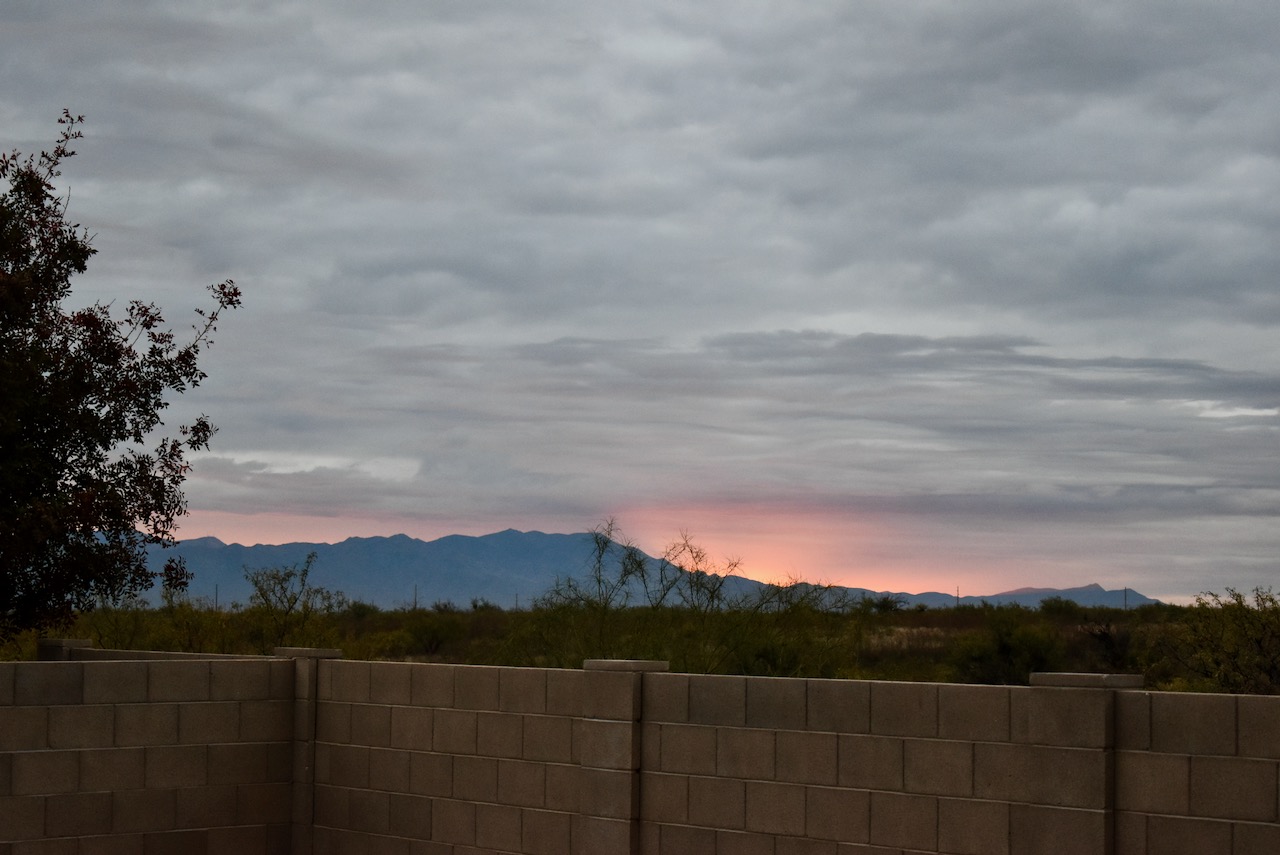 Monday night looked like the storms were going to get here a day early when I looked toward Bisbee. 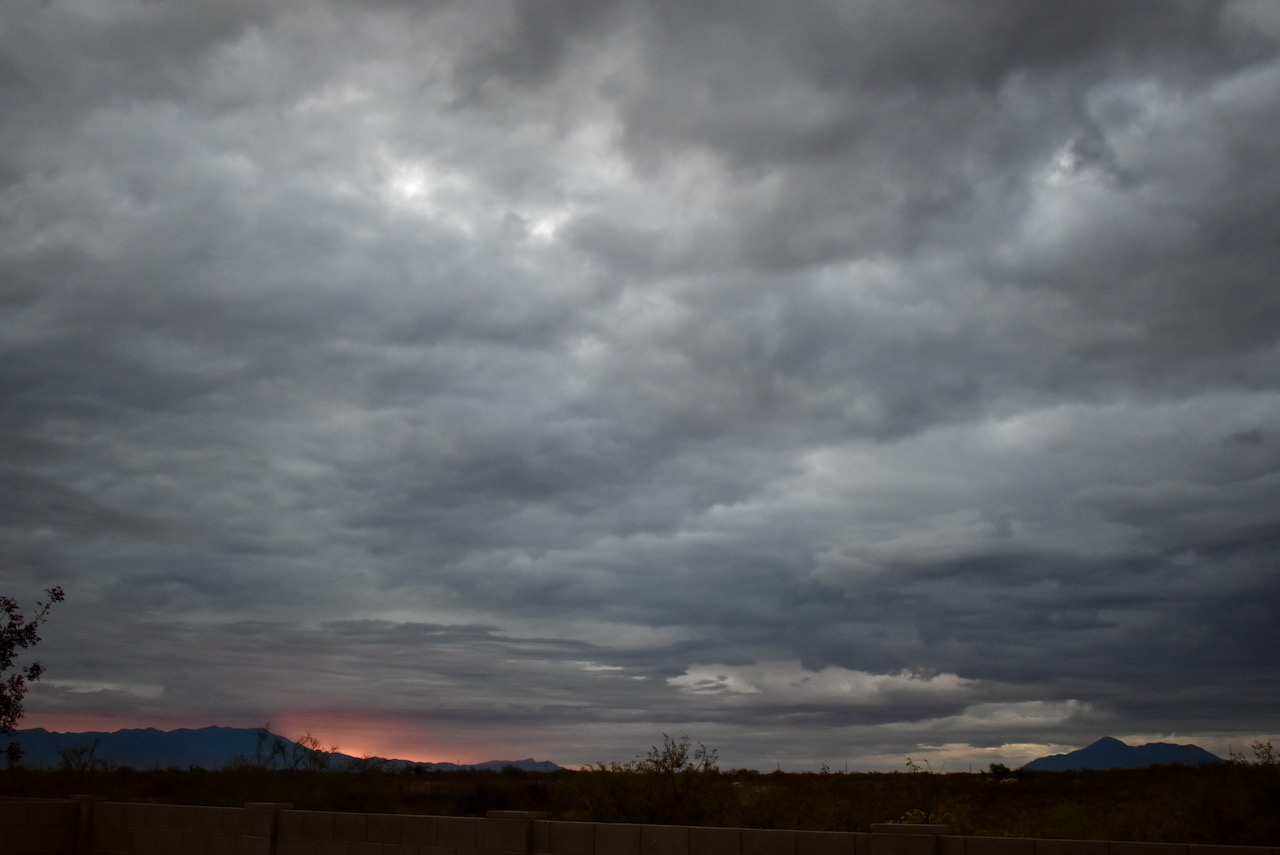 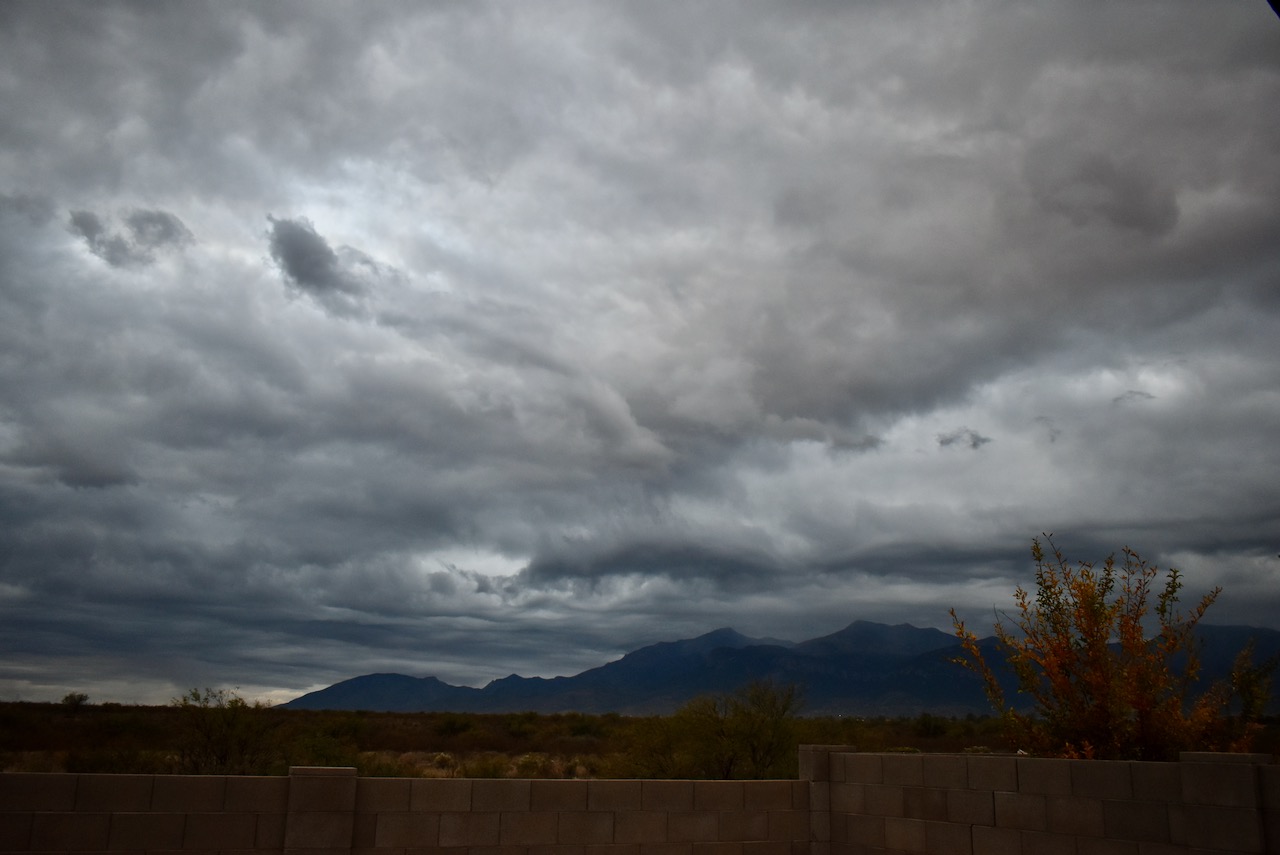 In the southwest it looked even worse. 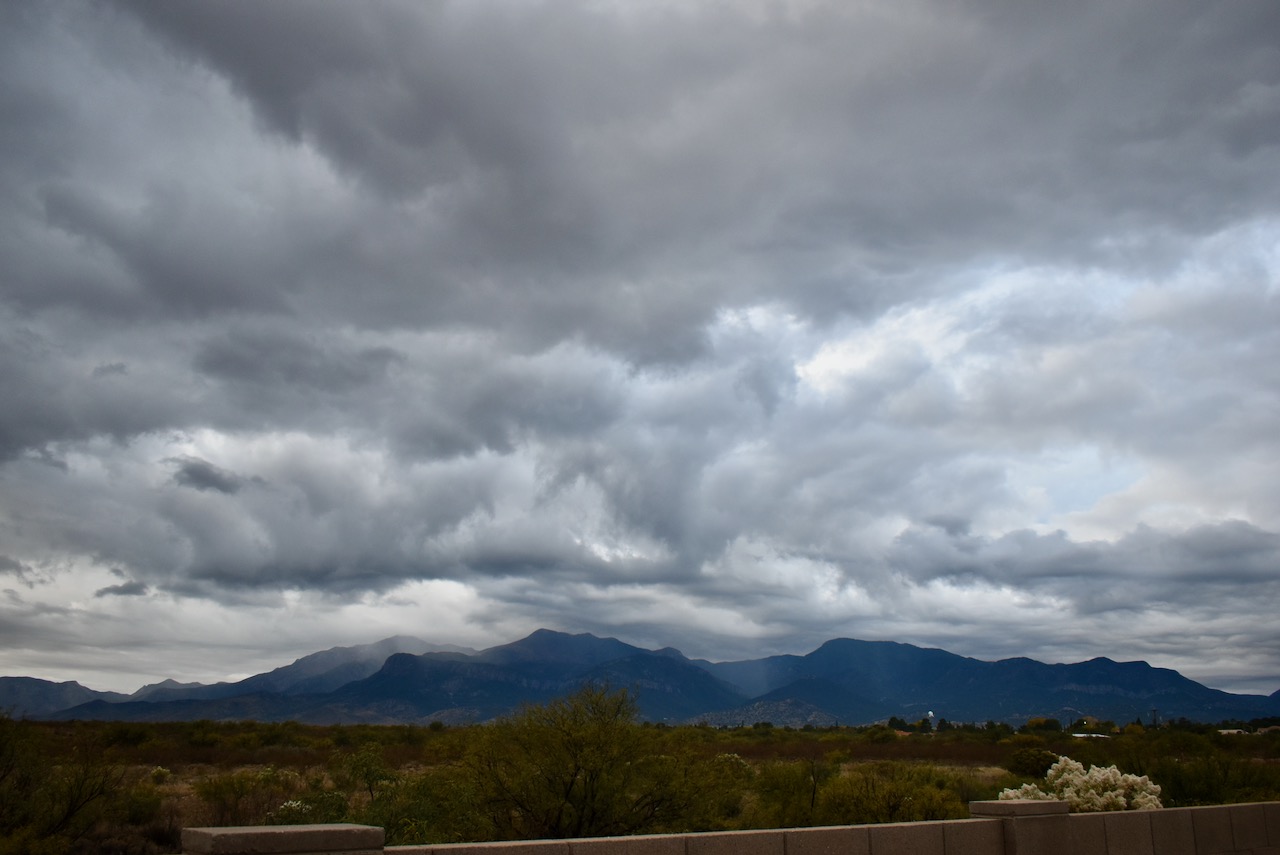 Tuesday morning it didn't look safe enough to take off riding my bicycle but the hourly forecast kept showing no rain until after 12 noon. I decided to take off around 9:00am and would have plenty of time to get home before it rained. 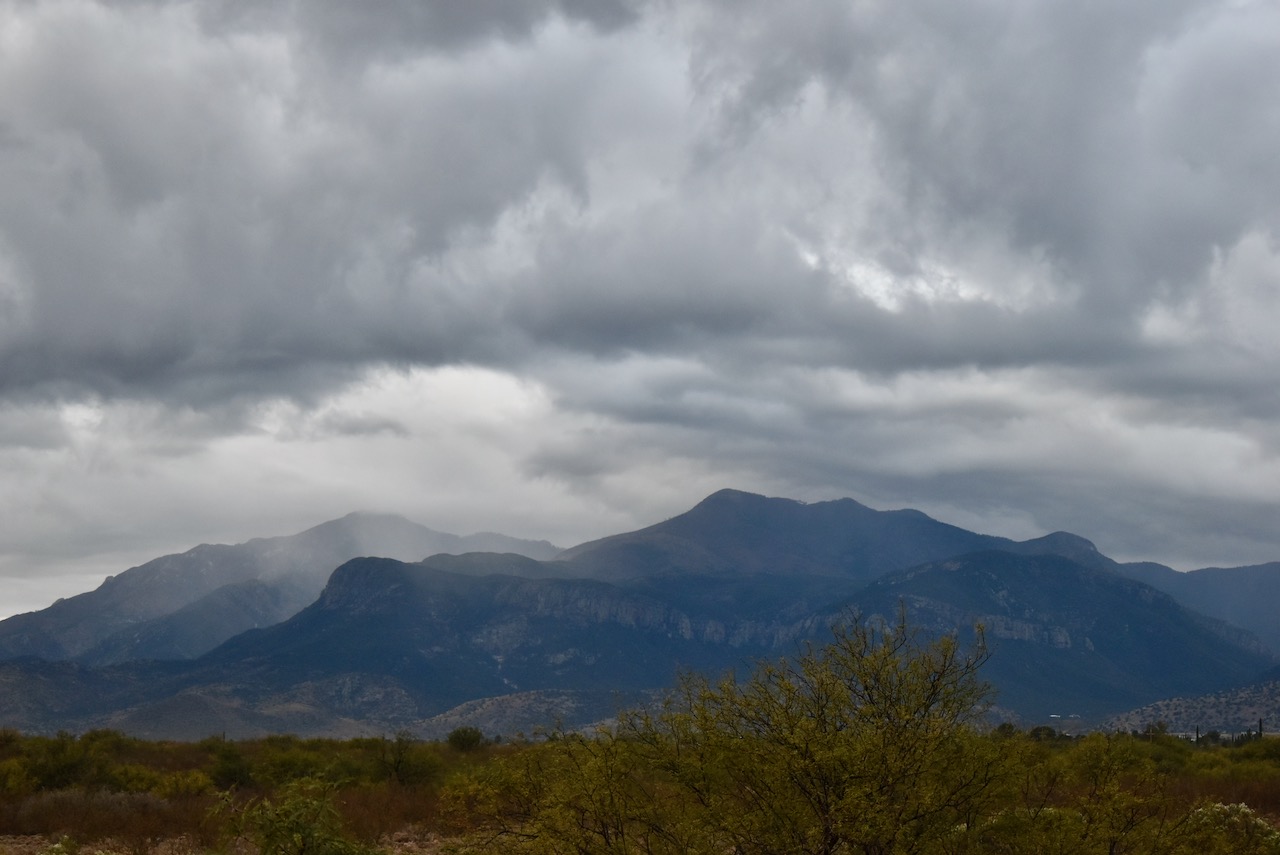 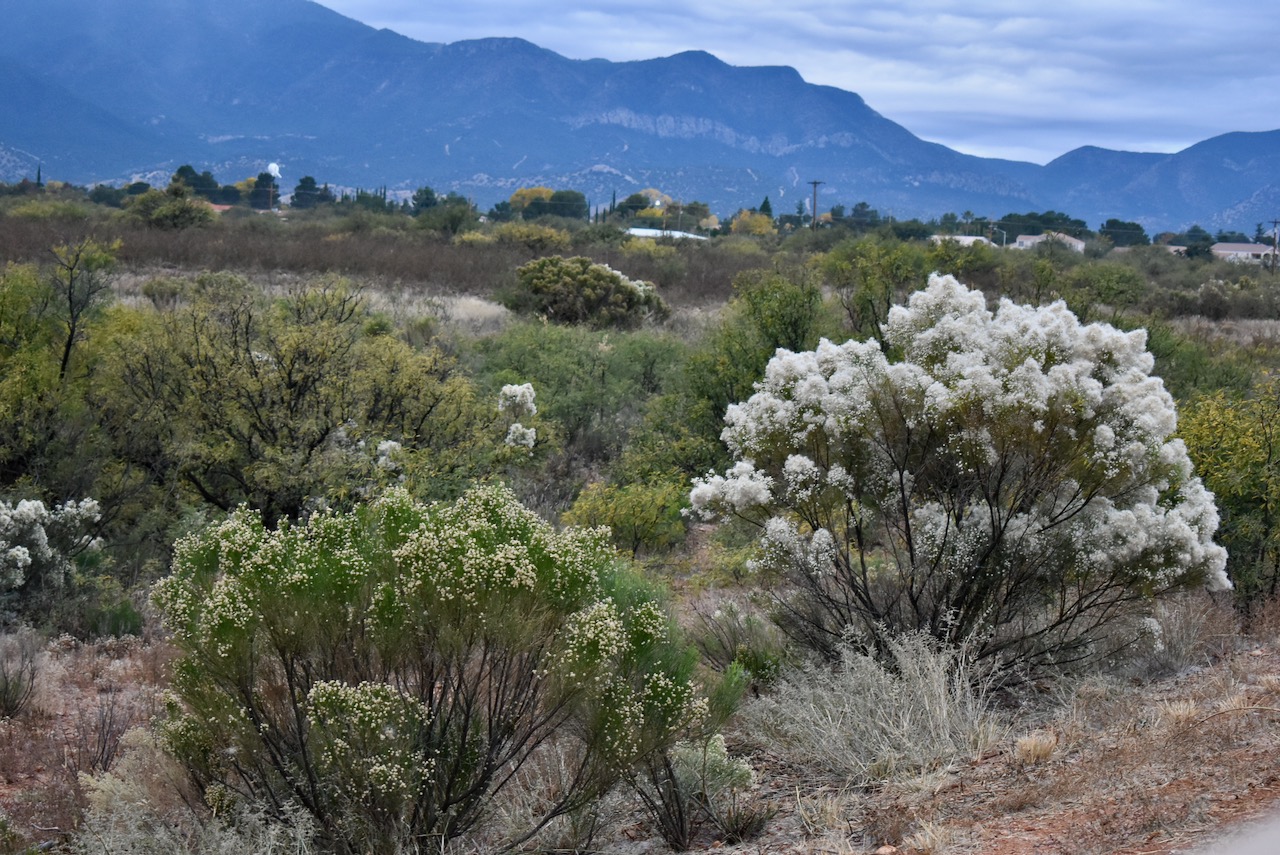 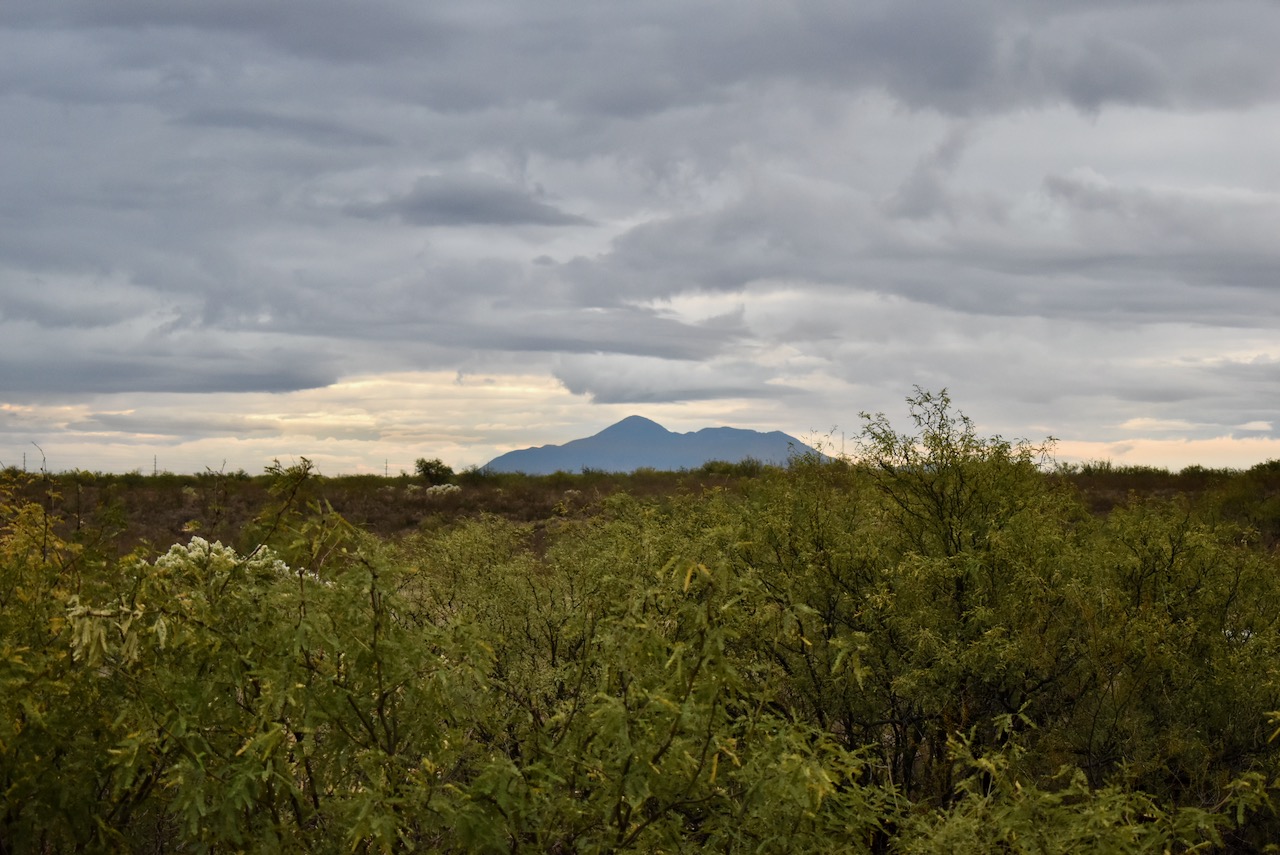 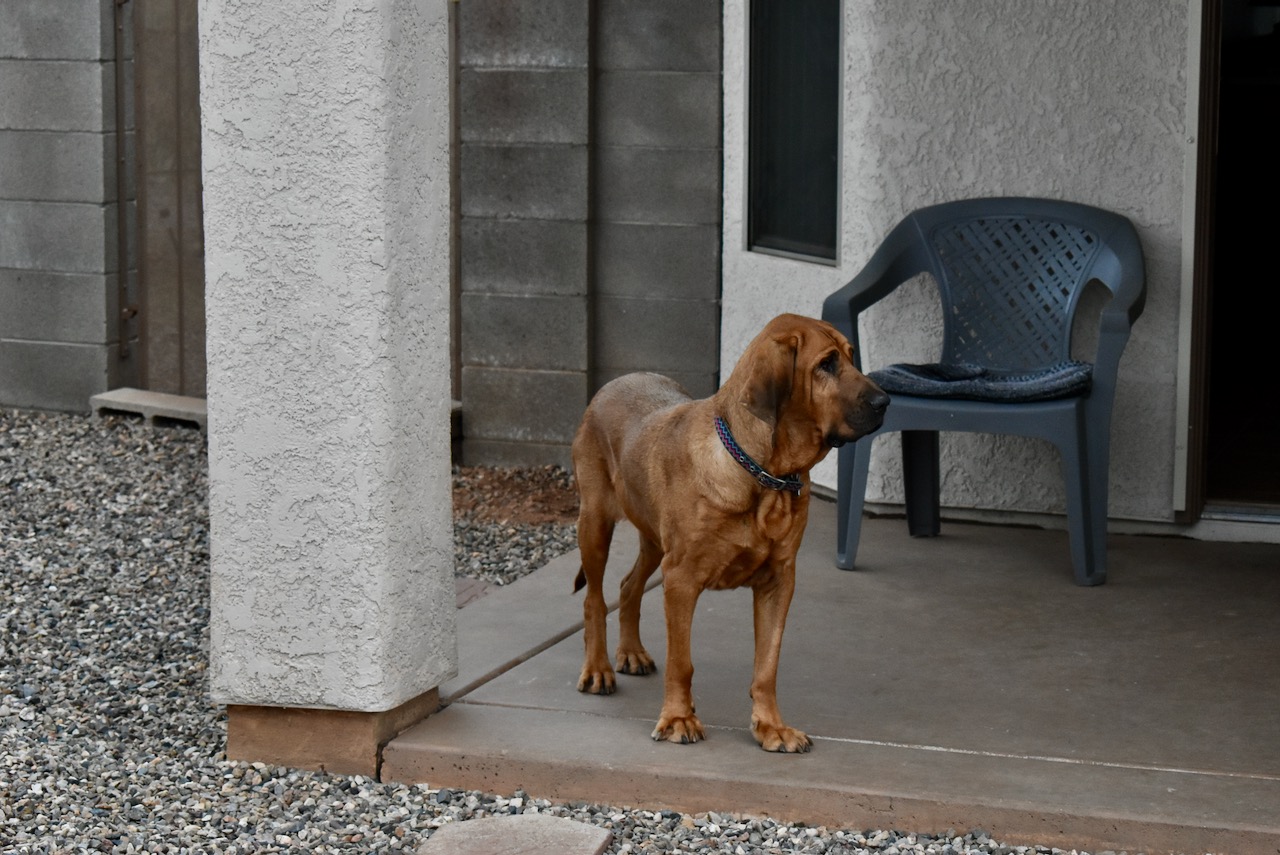 Stella continues to listen to the now 10 week old puppy next door howling for attention, but no one is home. 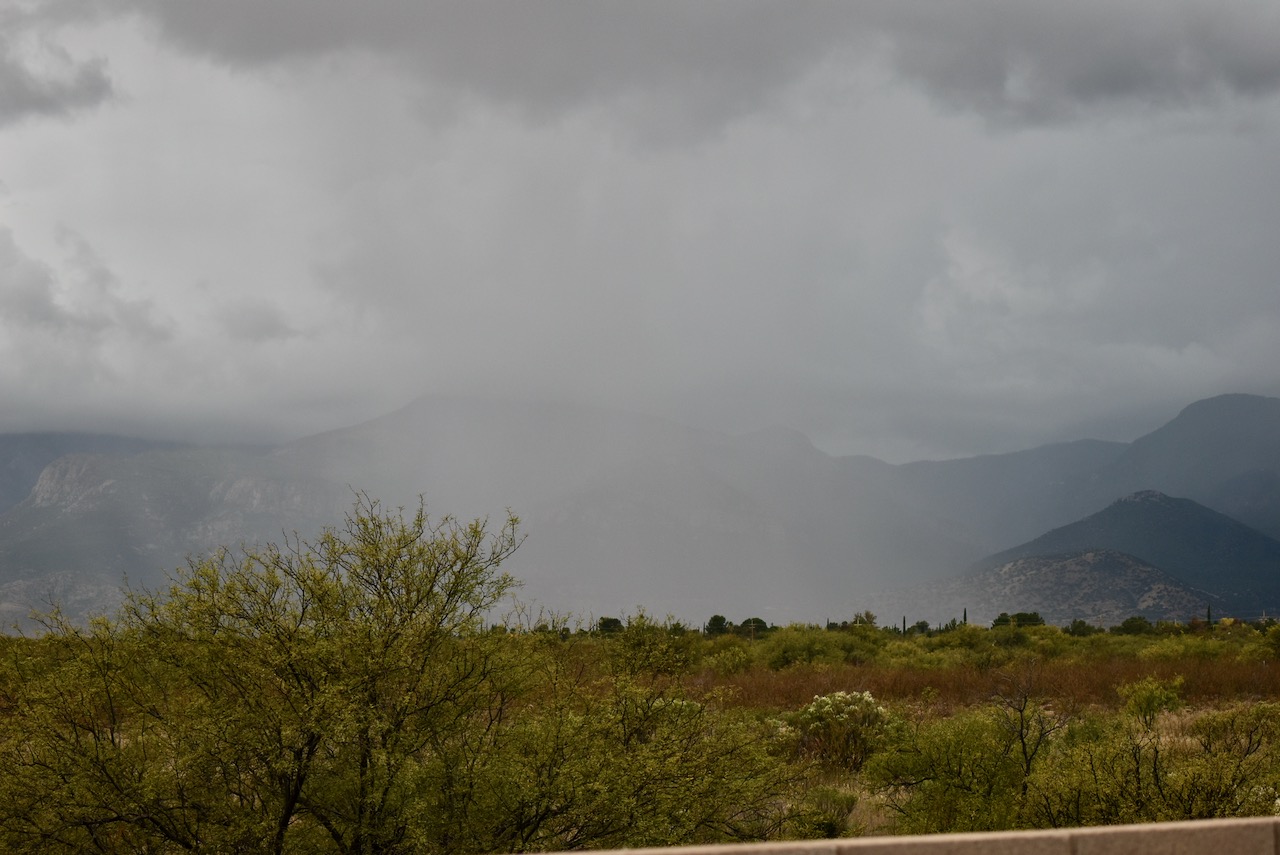 I had just changed from bike clothes to normal clothes after a shower when I glanced outside to see this. It was a little past 12:30pm on Tuesday and I had just made it back home in time. That rain is in the area I was riding just an hour earlier. 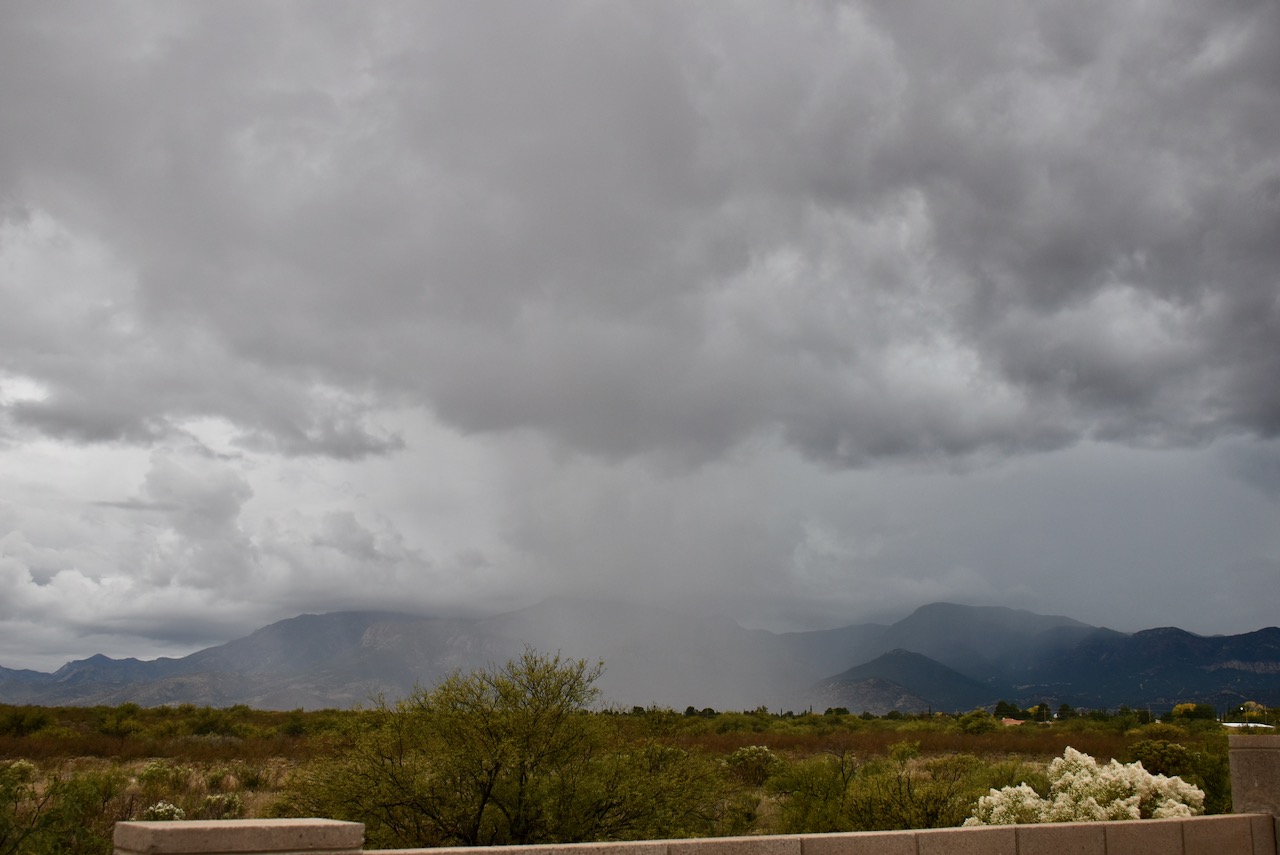 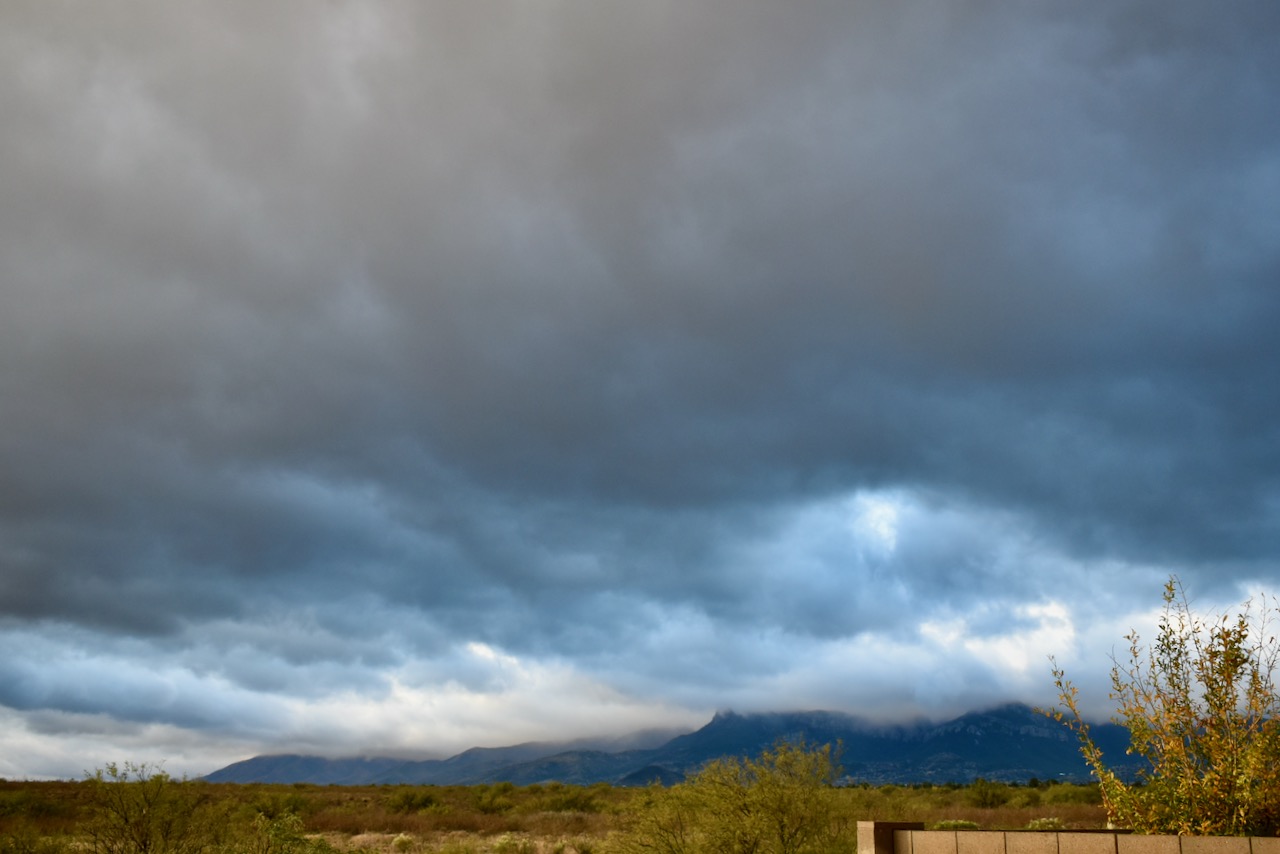 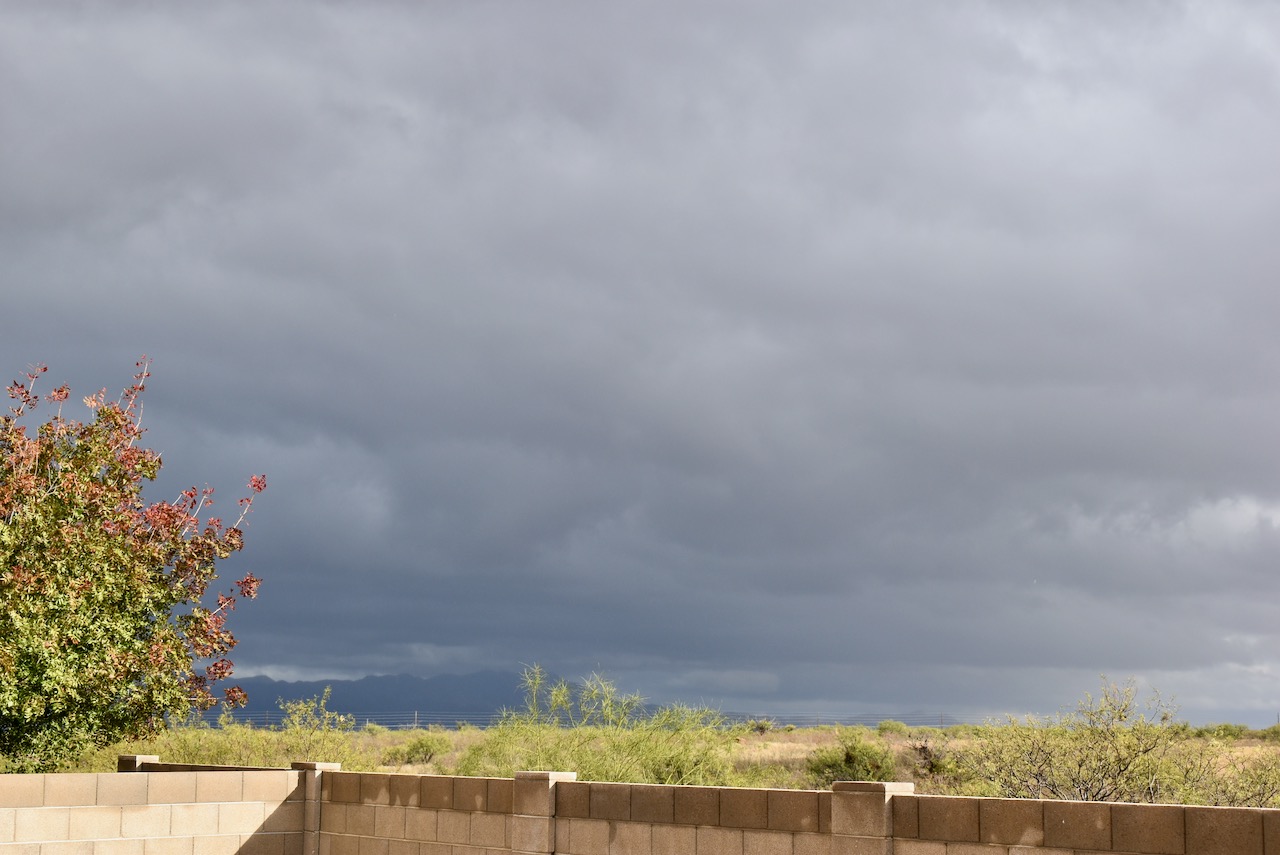 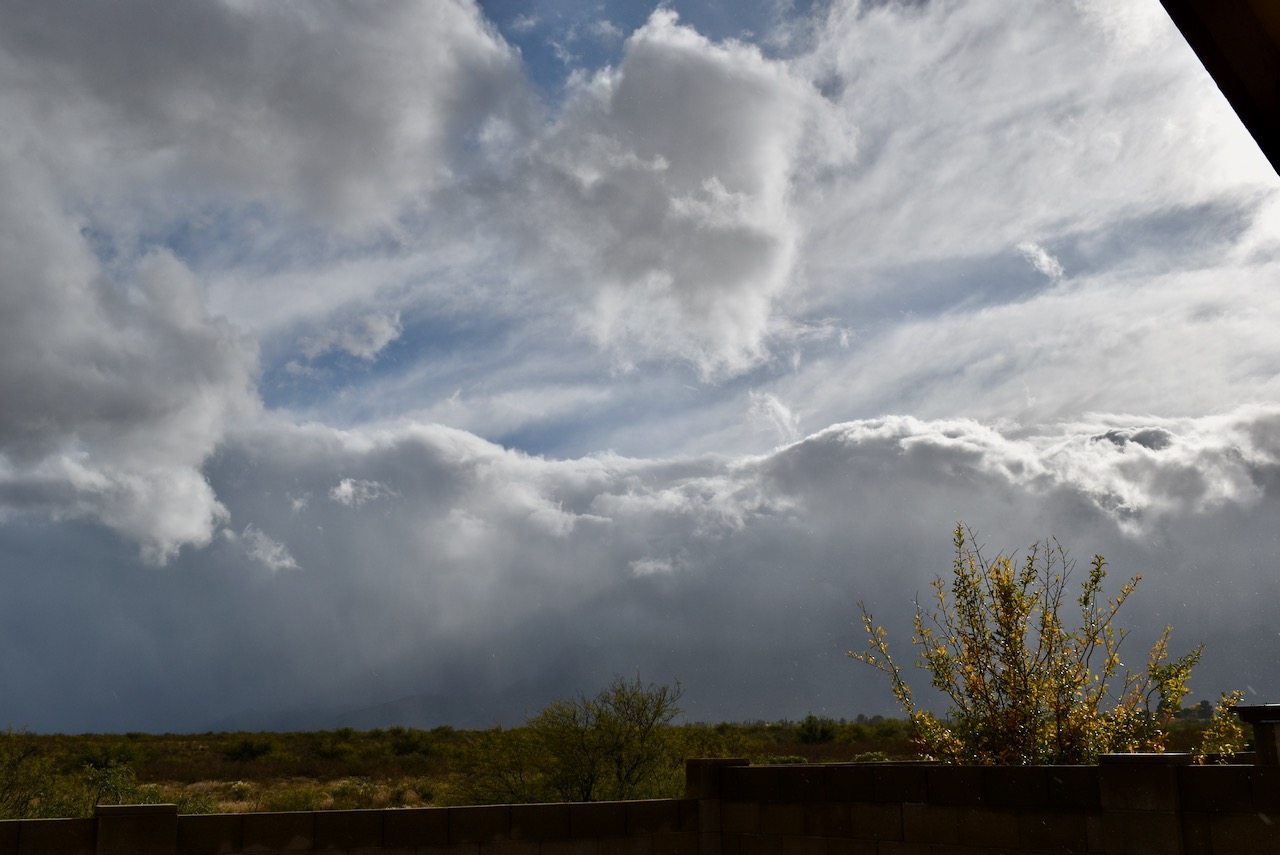 This morning I was hoping it would dry out enough make the roads clean enough to ride. The hounds had not taken a walk in two days and were getting restless if there is such a thing of a hound getting restless. They are not always couch potatoes. 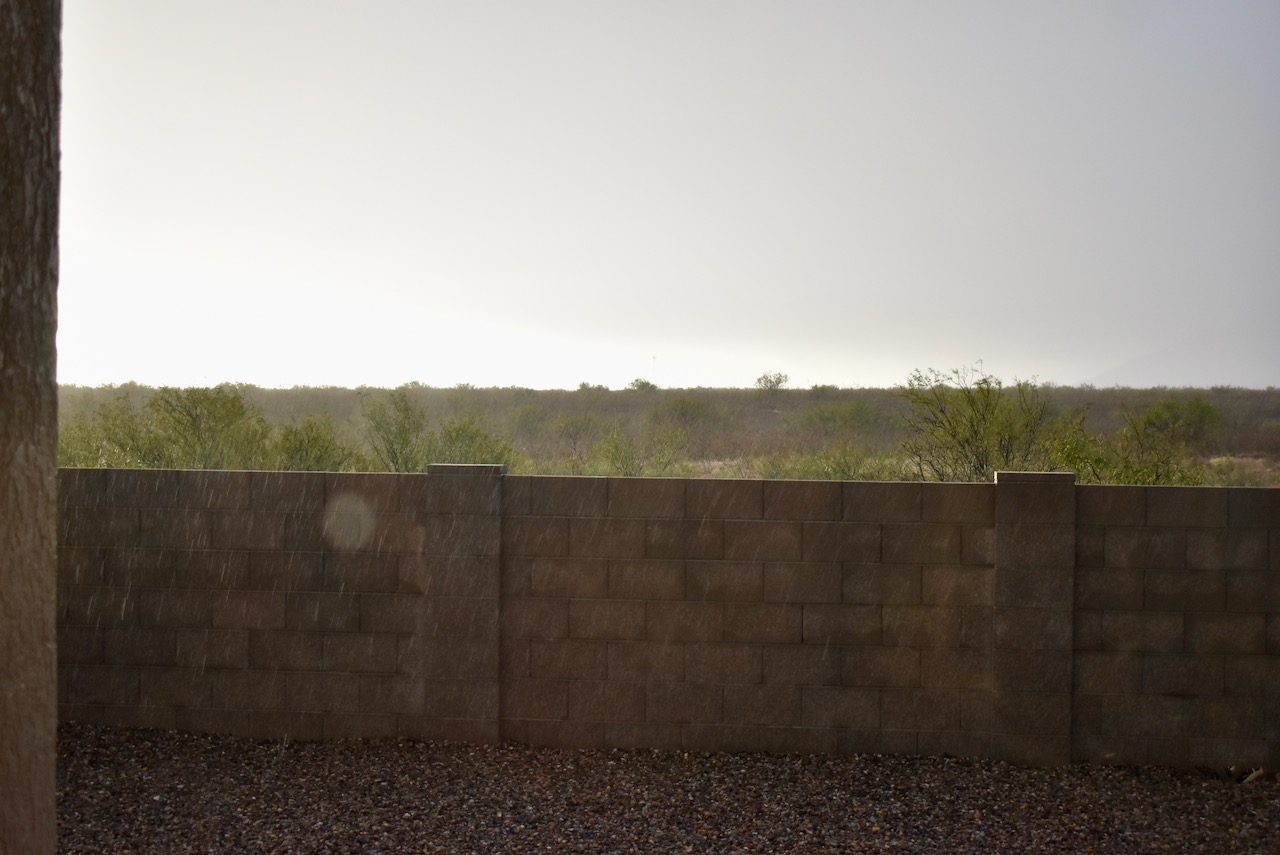 Standing with Stella at the patio door I could see again this morning the hound walk was canceled until later today. We have taken the short walk to the mailbox every day between the breaks of rain. I was also getting restless. Once your body gets in better shape from riding a bicycle, it wants to ride all of the time until it gets tired and then feels like taking a day off. Today I was wanting to ride.

I had tried riding indoors on the trainer the other day but became bored after 15 minutes, plus my friend showed up a few minutes later. I wanted to ride outdoors sometime this afternoon. Would 47° be too cold? It wasn't when I rode on Whidbey Island 25 years ago so I should be okay today. The hounds? They were only interested in sleeping ... it's winter and they know it. 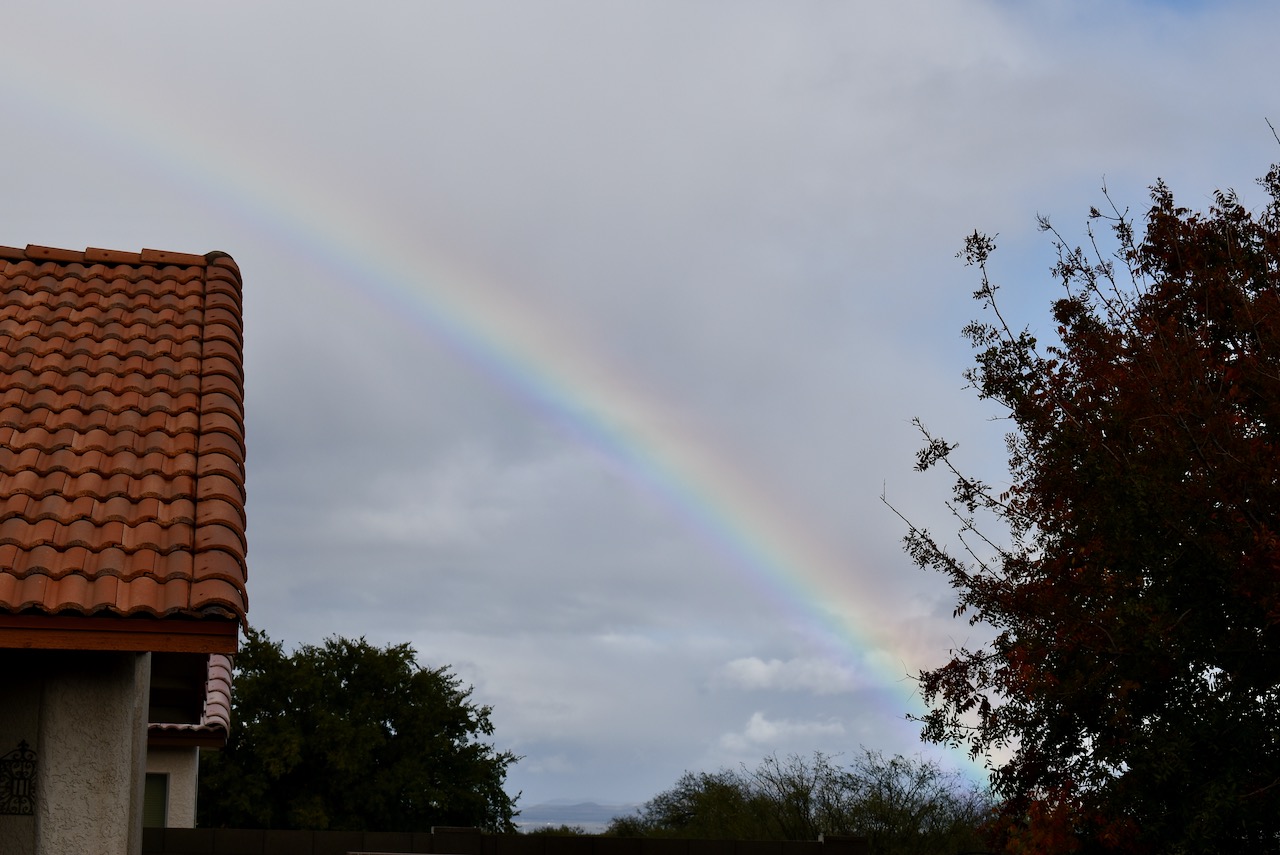 I pulled out the mountain bike, threw on a jacket and left my jeans on. I wanted to ride downtown to the bike shop and see if they had any winter bicycle gloves because starting next week I am going to need them if I still plan to ride outside ... and I do.

I rode for about 5 miles and got a ride back home from Mark the bike shop owner. He wanted to test drive a truck he is thinking of buying and I needed a ride because it was raining again. 47° and rain is not a great time to be riding a bicycle outside. The rainbow was a pleasant surprise when I got home and shows that sunny days are right around the corner, although they might be cool temperatures. 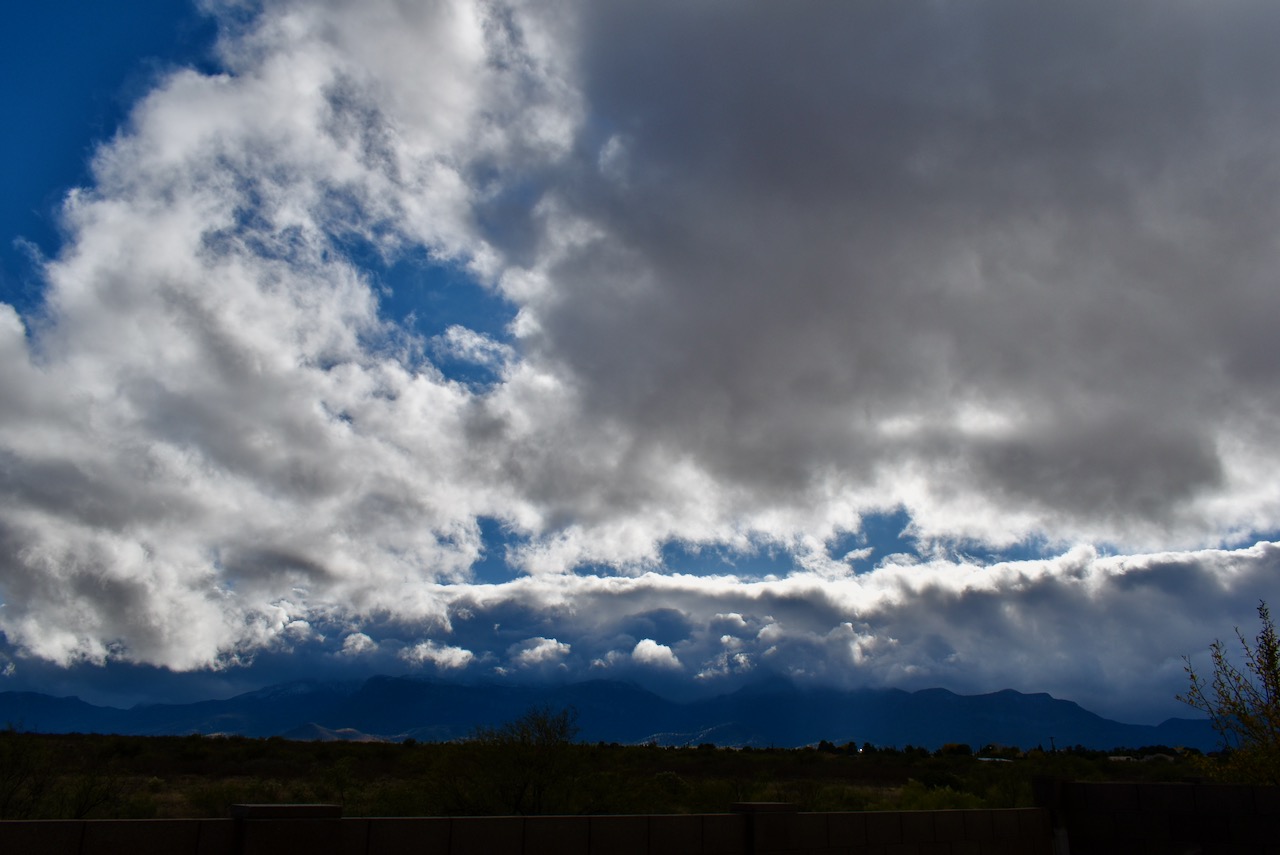 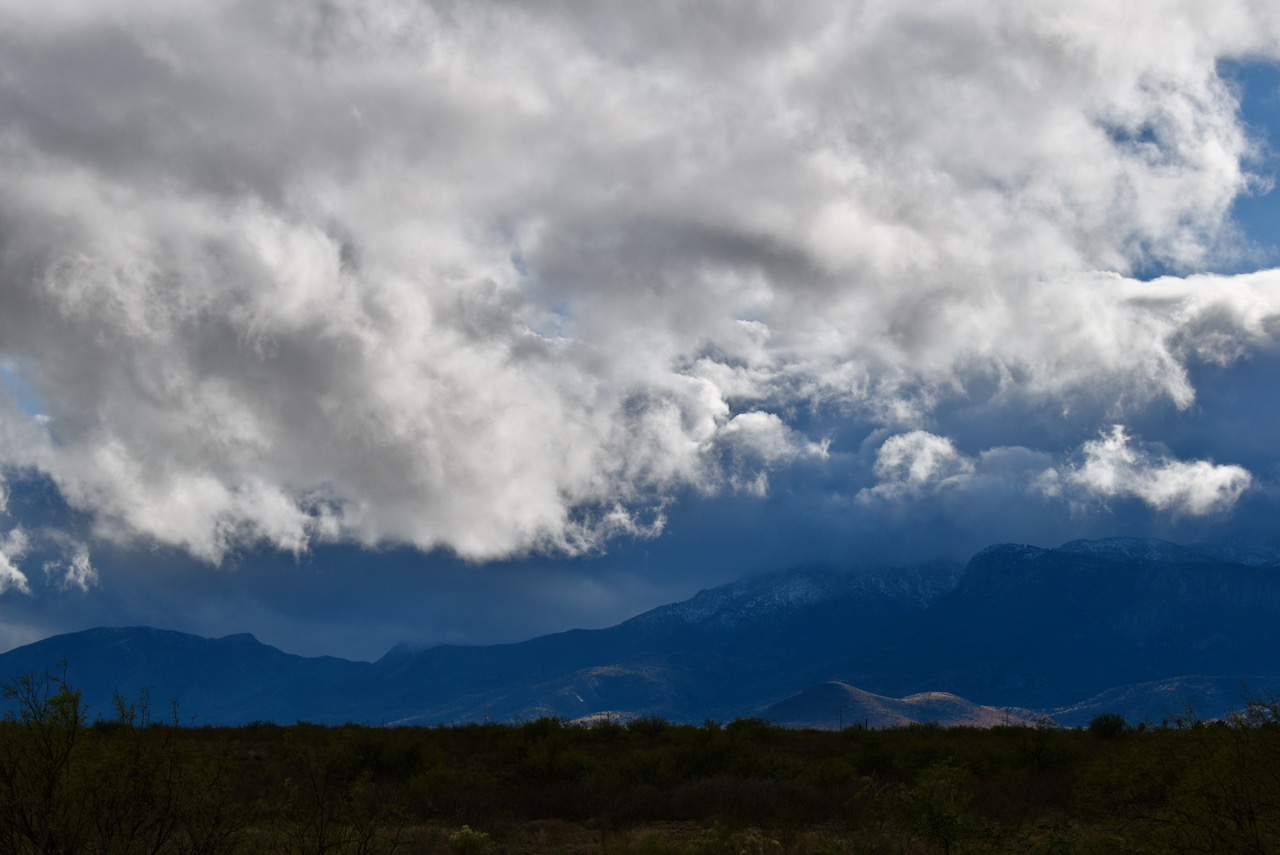 Monday and Tuesday was the first time I rode my bicycle back to back days for over 28 miles each day and for more than two hours per ride. At no time did I feel any hip pain or soreness and the next morning after each of these long rides the new hip felt normal. In fact unless I remind myself on purpose, I have forgotten all about the hip being replaced. I feel very fortunate for the quick turnaround with little pain. 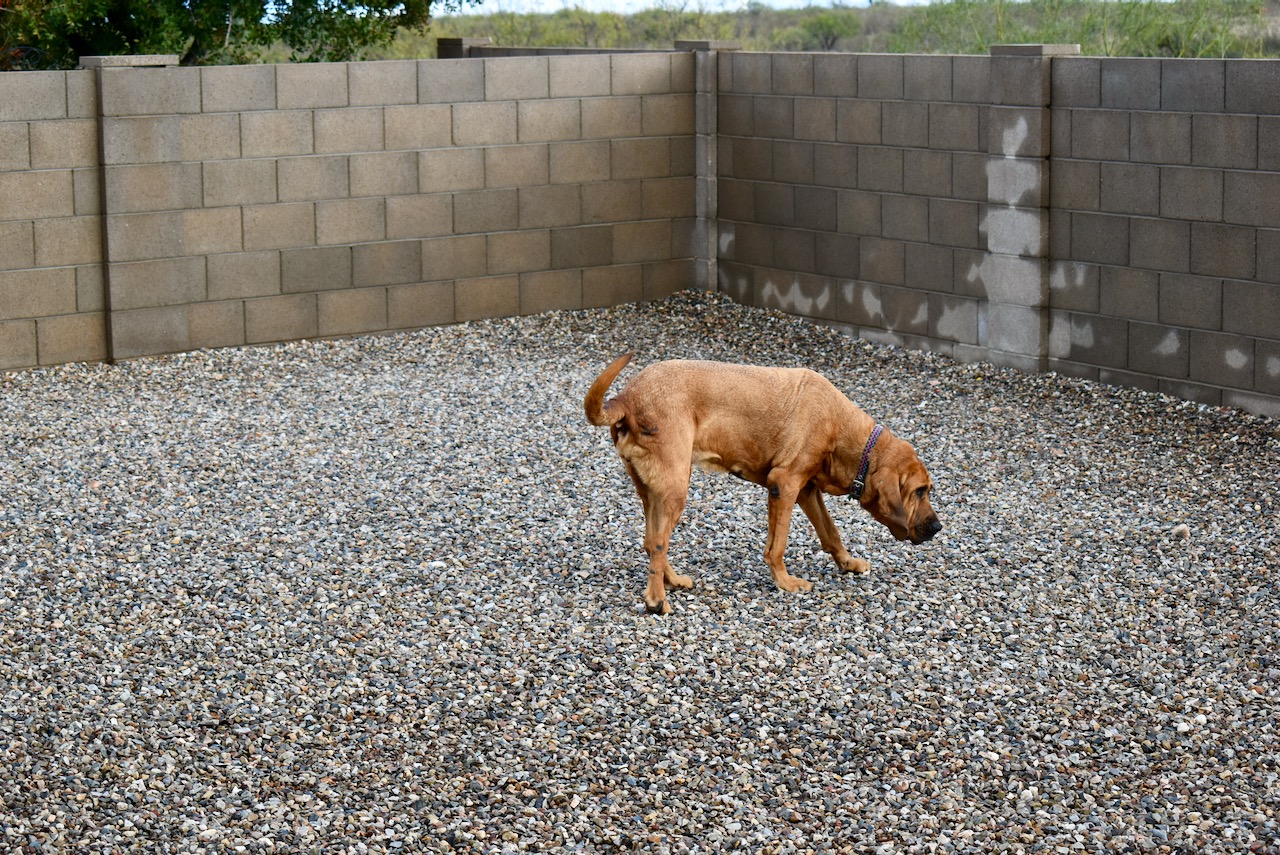 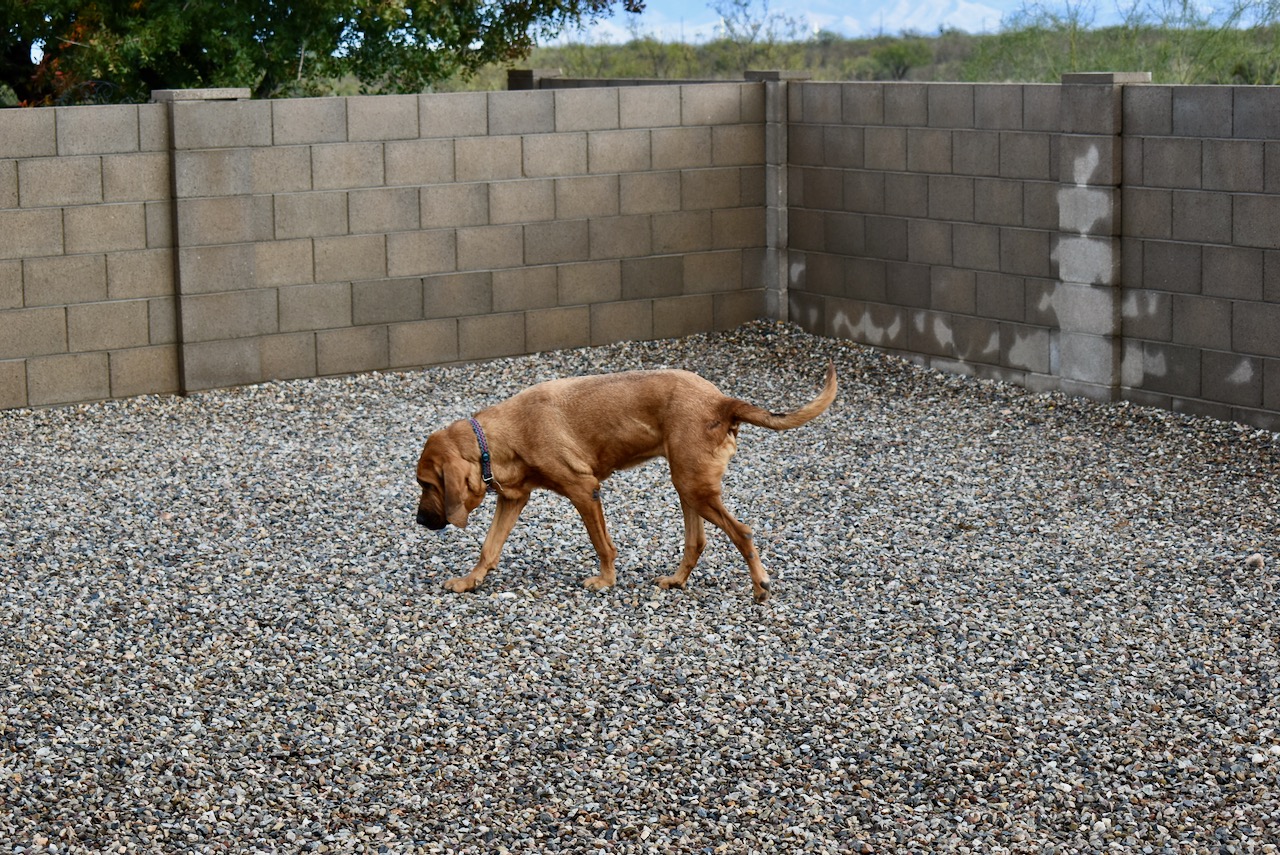 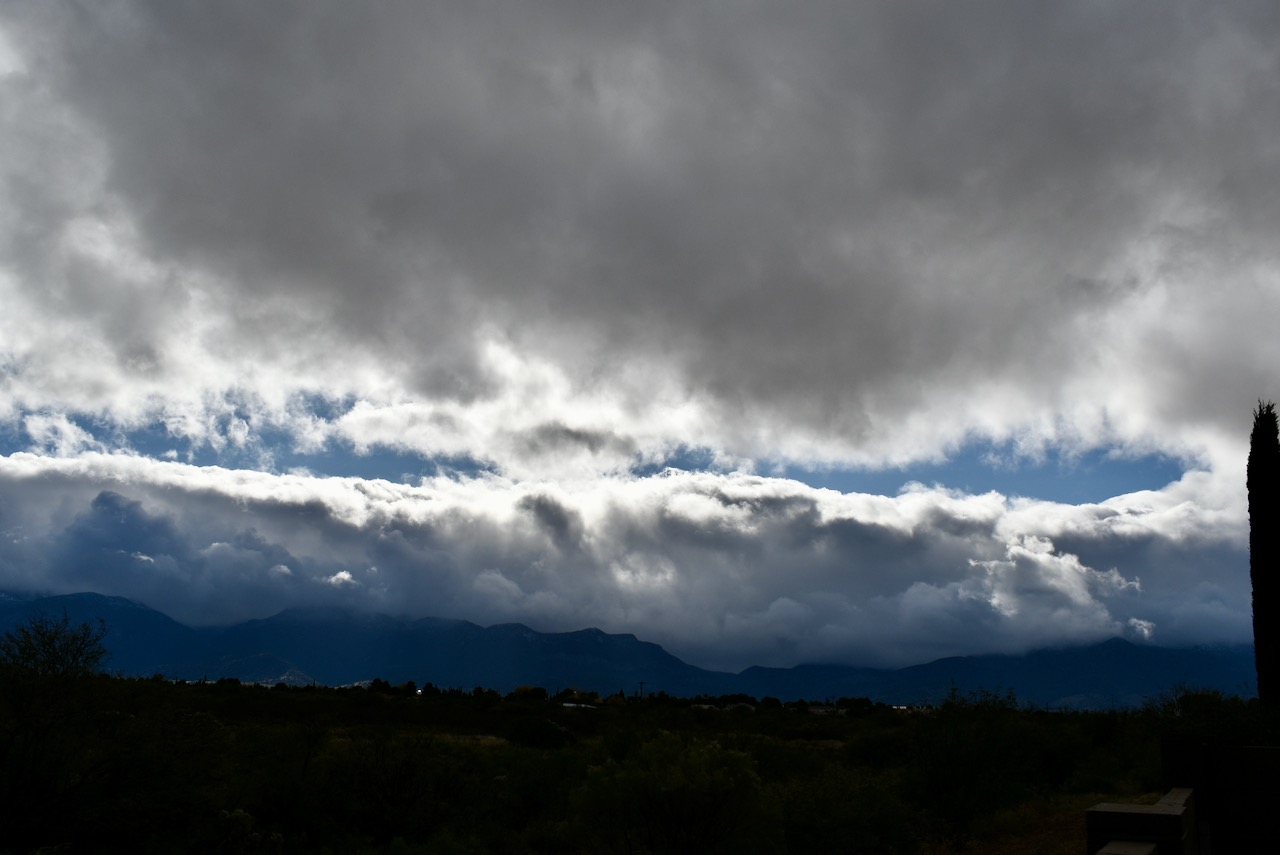 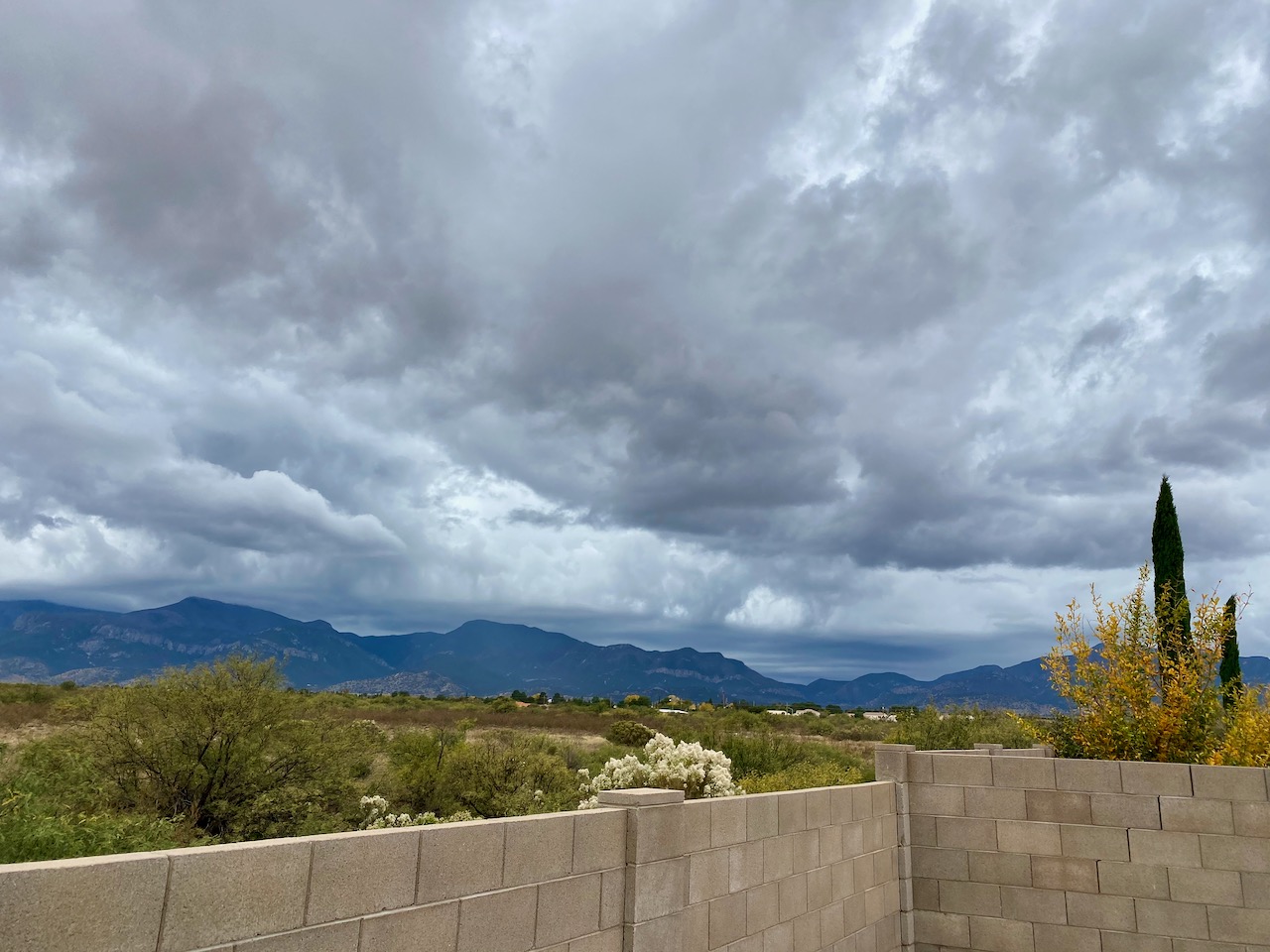 The winds have finally died down. There are some breaks in the clouds with blue skies and the sunshine trying it's best to show itself, so good weather is just around the corner again. I was told today that this is the 'windy season' so to expect it every time I go out to ride. 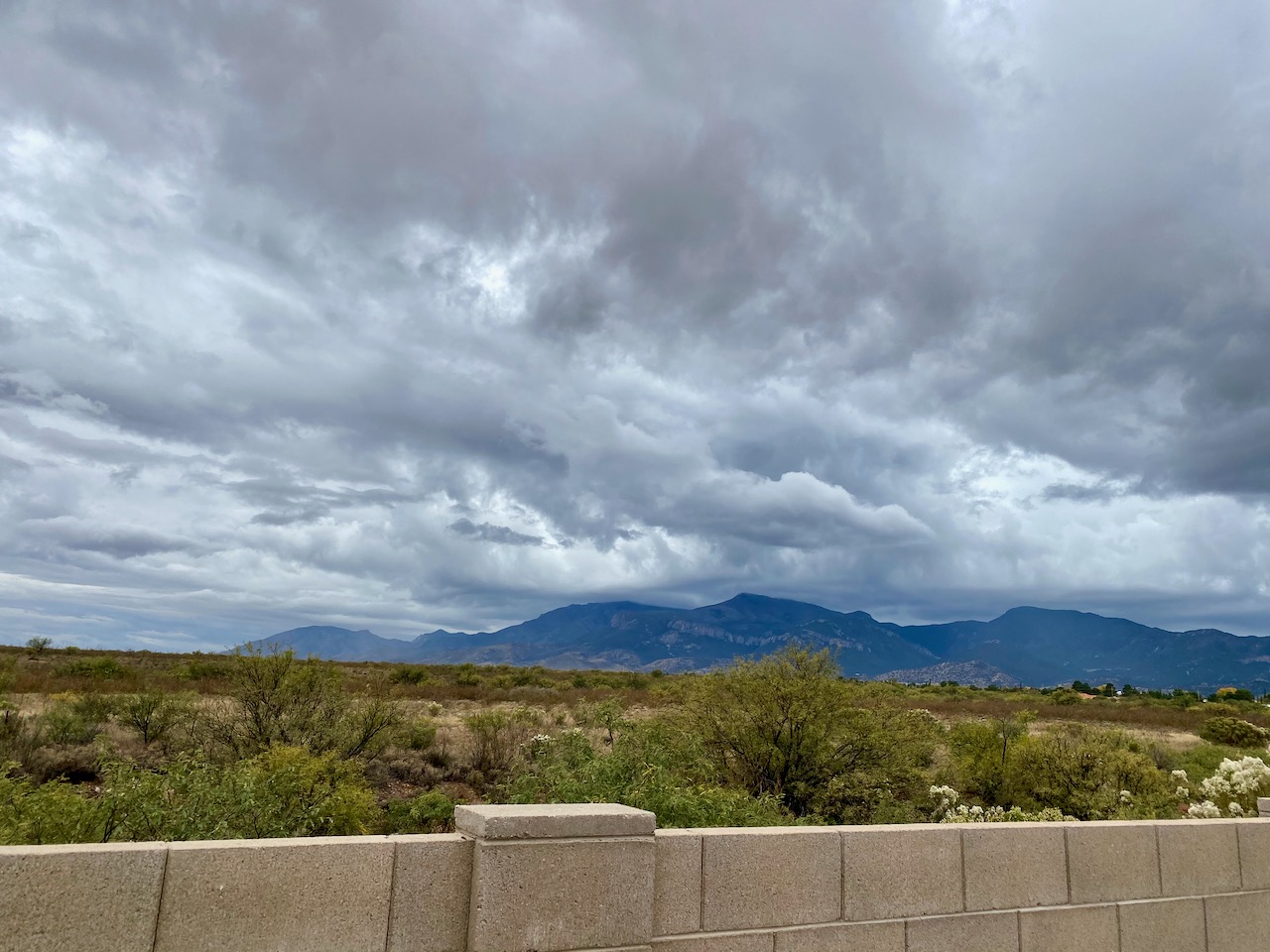 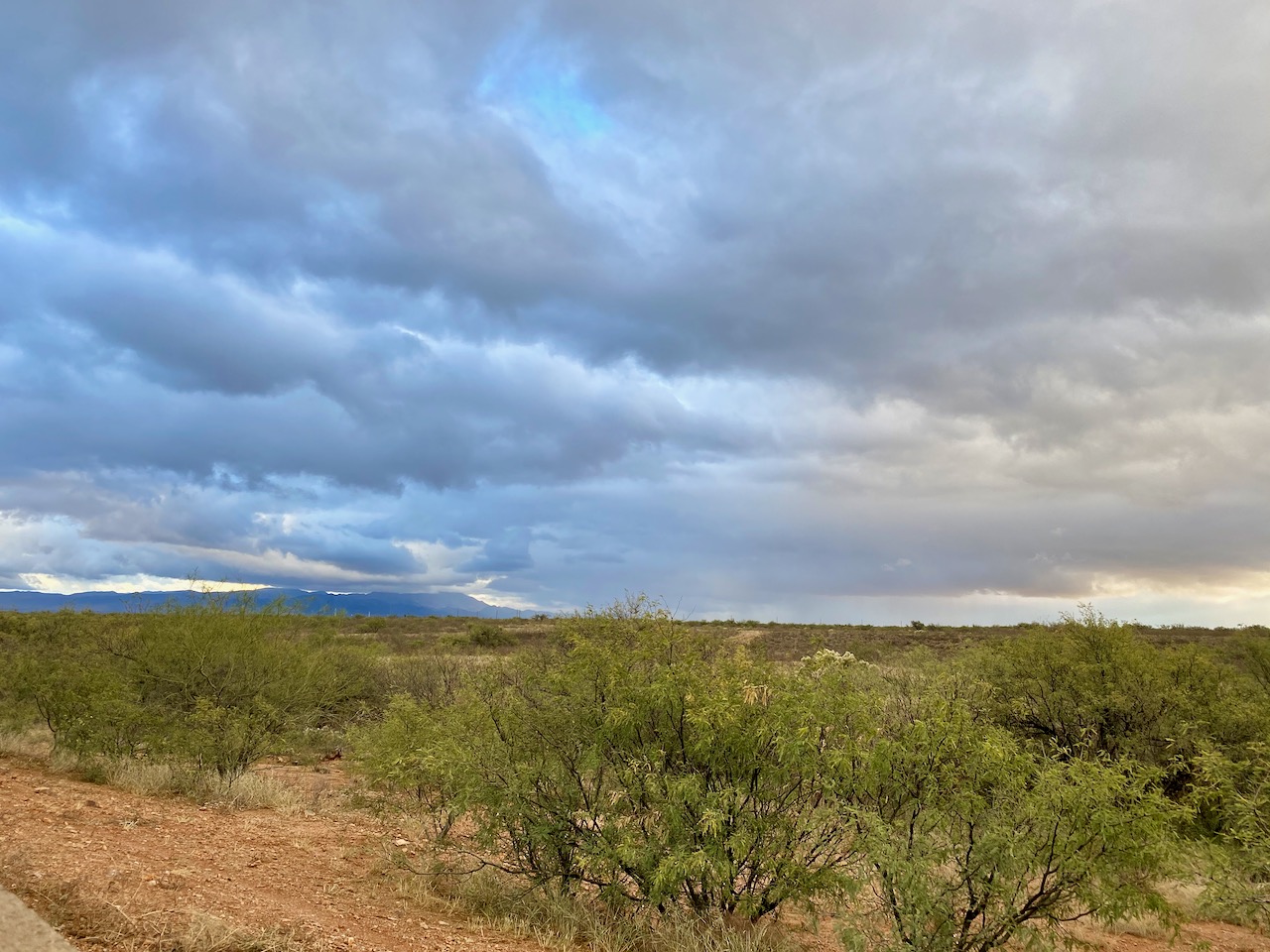 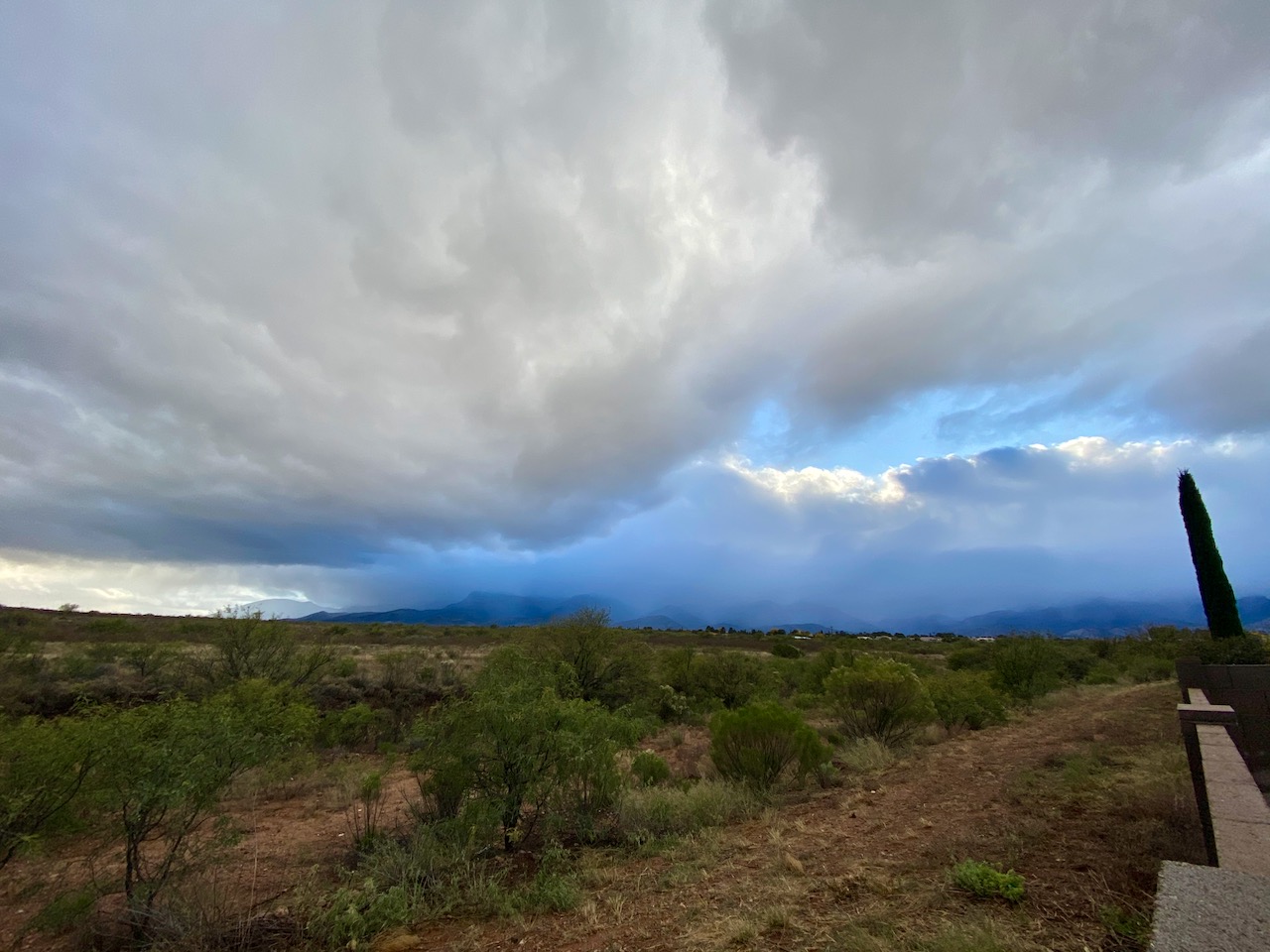 Sorry that I don't have a trip to write about or more photos of the hounds but the hounds are pretty inactive during rains plus some of the trips we would like to take is affected by flash flooding if I were to drive off pavement.

I have a friend coming down from Phoenix tomorrow so I can install my truck bed cover on her Tacoma TRD Off Road pickup. Then after a short tour of the great little town we'll have some lunch at The Diner. I am in the mood for some of their extra hot chili and this time I'll take a couple of Tums tablets with me so I can get an early start combating what the chili will do to my stomach. Jalapenos I love, my stomach doesn't. LOL

BIG NEWS TODAY ... I almost forgot ... the replacement vertical blinds came in today. I picked them up and installed everything. That's it for the 'freebie' so from now on, Stella has to pay for them.