I really did try. I ran the Dell computer through it's paces, explored Windows 10 from every corner and did all the same stuff I do now. I do more than just live on the internet and have for years on my Apple 'toys' but by Monday night I felt like returning the Dell computer. By this morning I gave it another chance but by 10am I was resetting the computer back to factory settings so all of my personal information was off the computer. I already knew what my plan was today ... that new iPad Pro w/Keyboard. 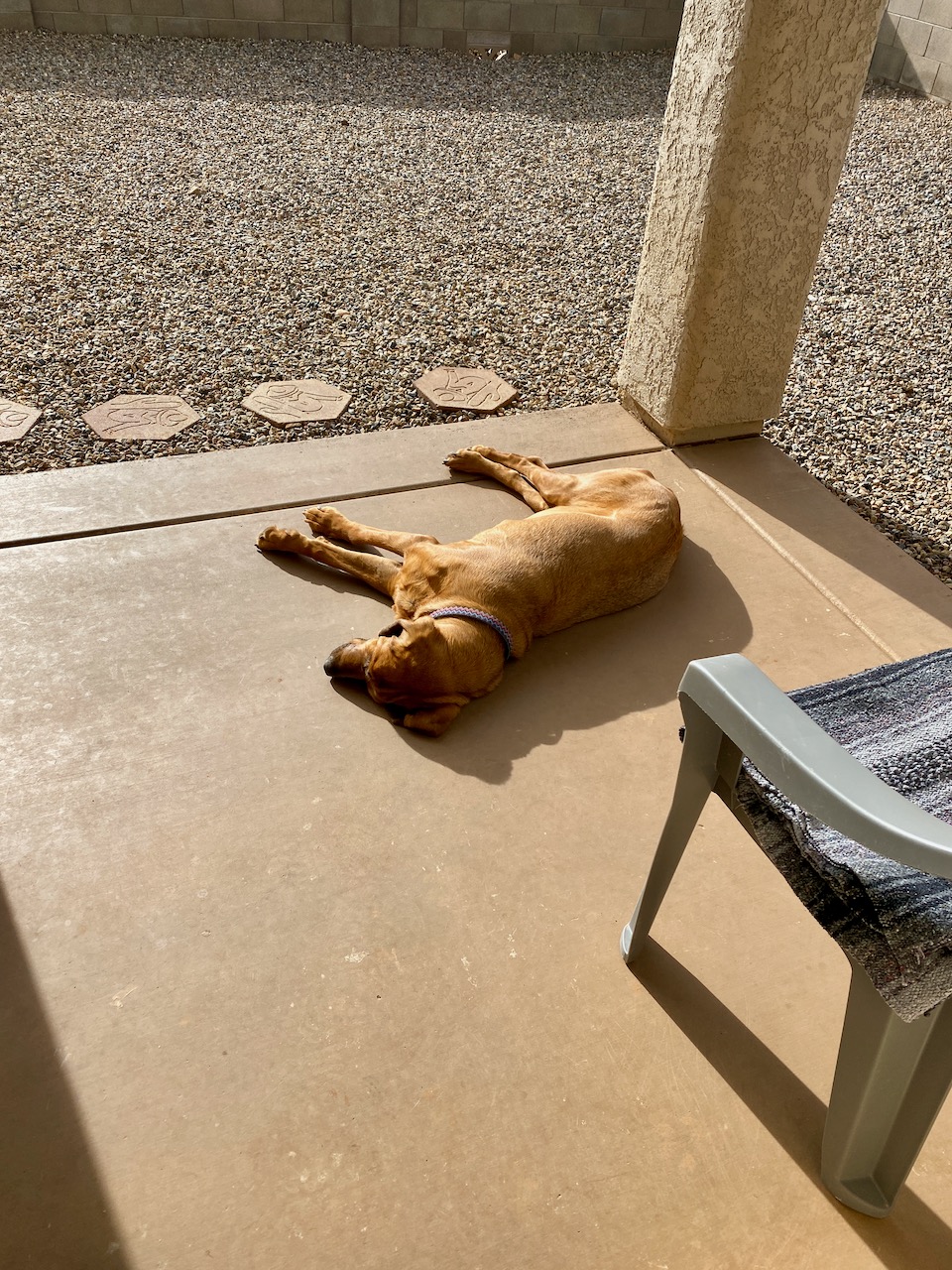 It was cold this morning as it was yesterday for most of the day but Stella found some warmth on the patio combine with the sunshine to take a long nap outside. I rode my bike and returned home to get ready for my big doctor's appointment with the MD that was highly recommended and one I choose as my new General Practitioner. More on that appointment later in this post. 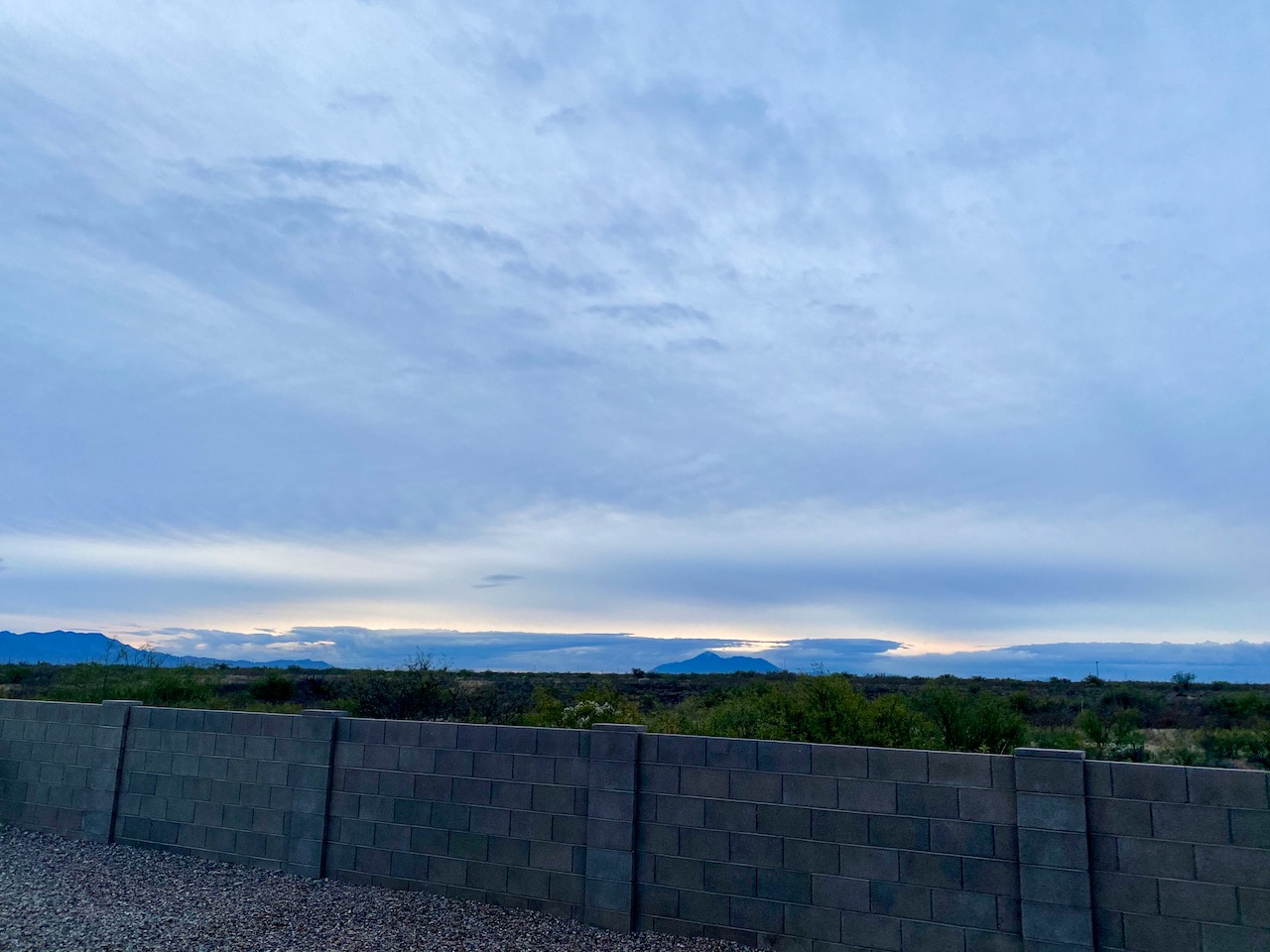 You might be getting tired of the photos I take from my patio and if so, I'll say it's just hard not to. Every day and sometimes multiple times per day, the sky really puts on a show. Like my friend said the other day when we were standing at the fence ... "from here you can't even tell you live in a neighborhood" ... and that is one reason, maybe the biggest reason I chose to buy this house. 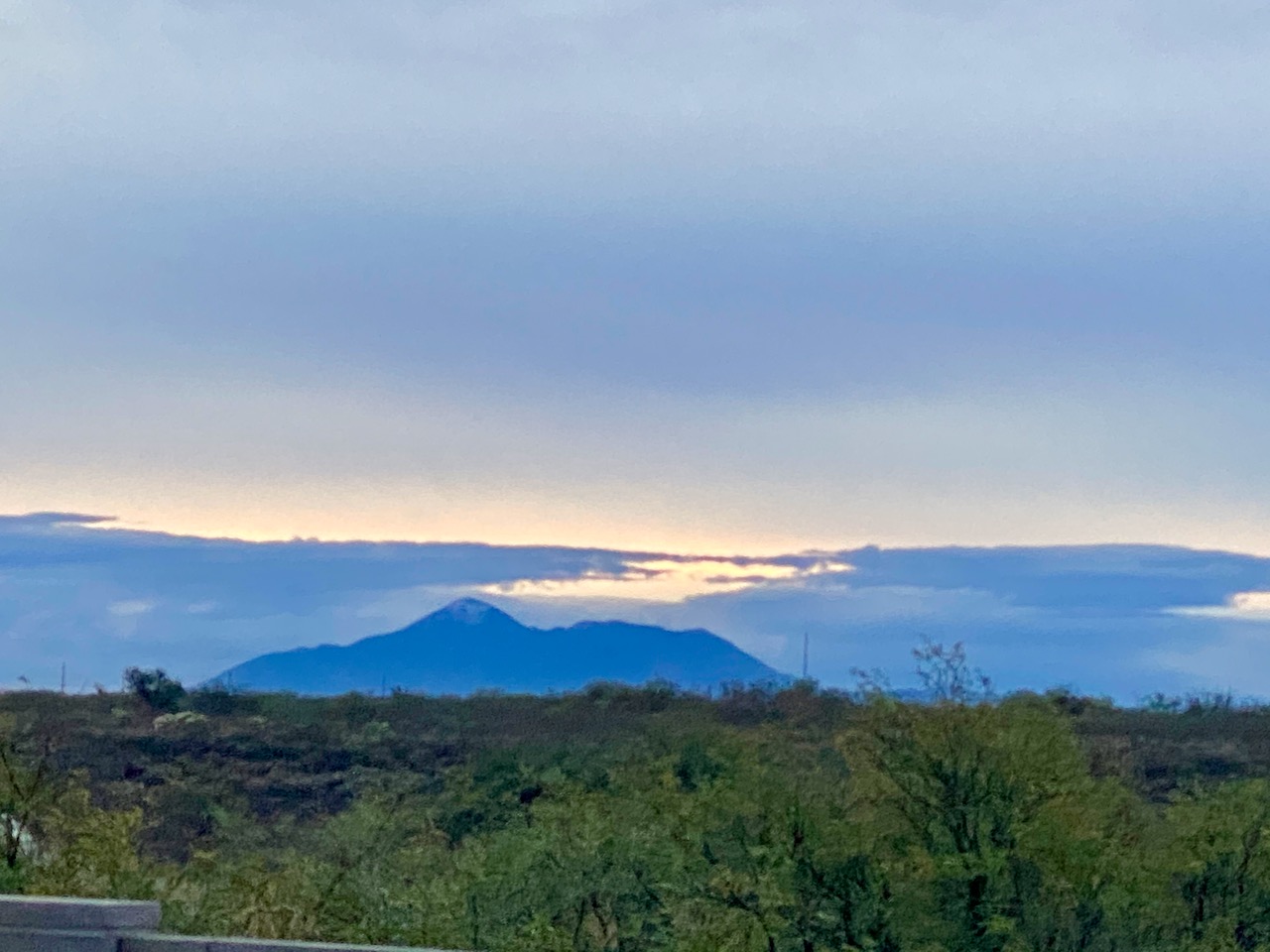 This was Monday morning .. 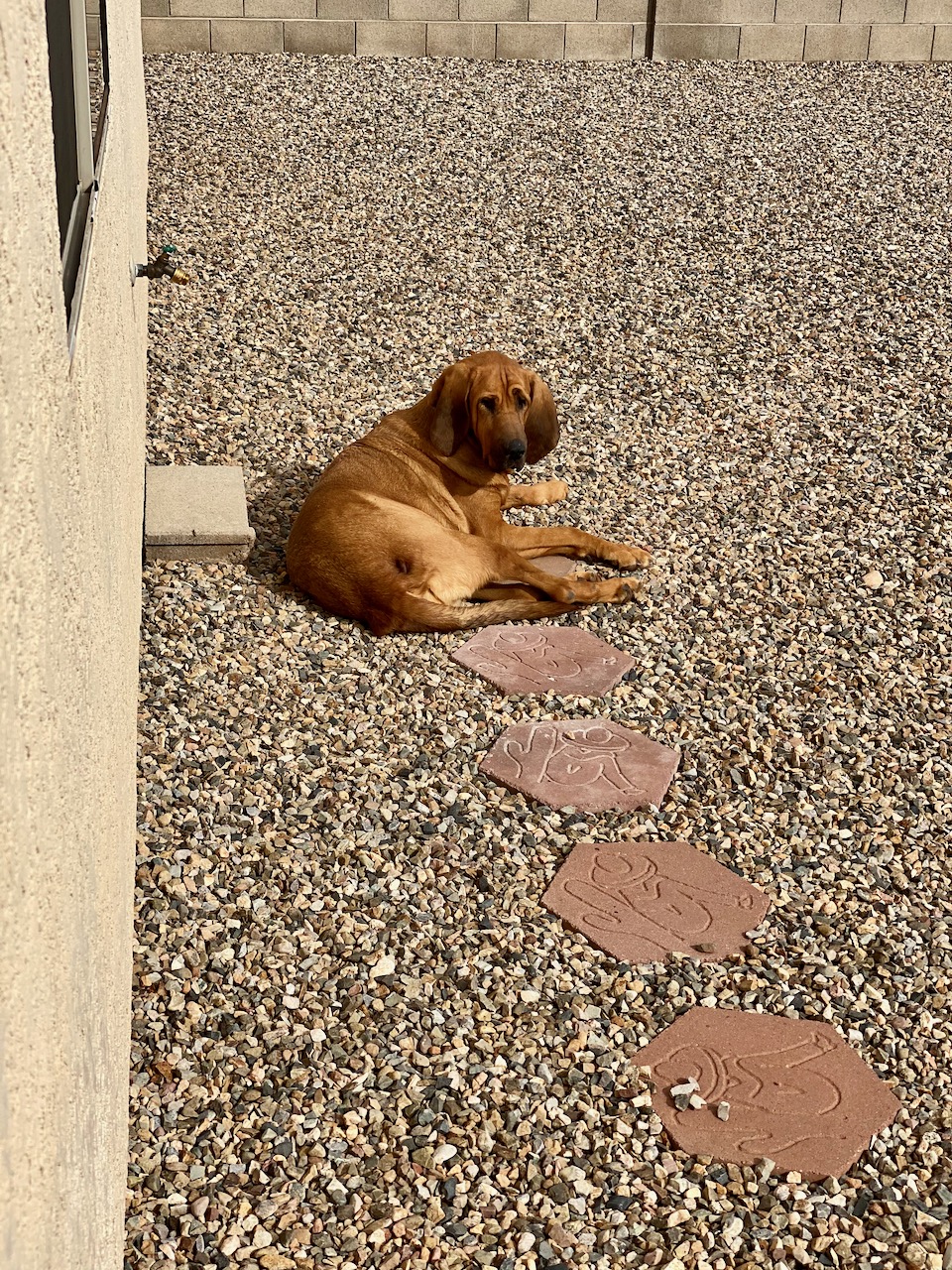 I looked all over for Stella but didn't find her until I stepped into the yard and looked around the corner. She had found the warmest spot in or out of the house. 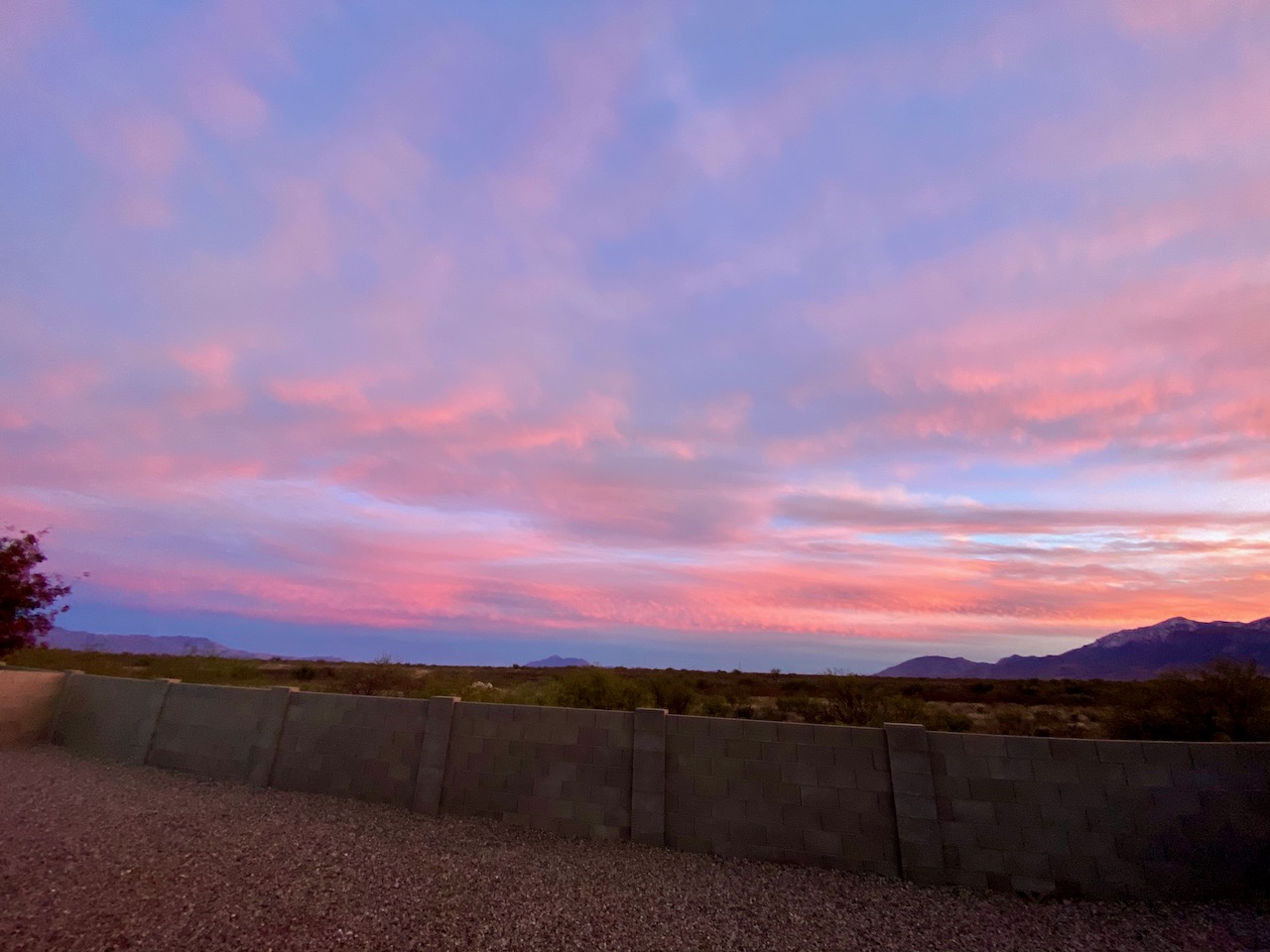 Monday nights sunset was fantastic. I didn't edit any of these photos. 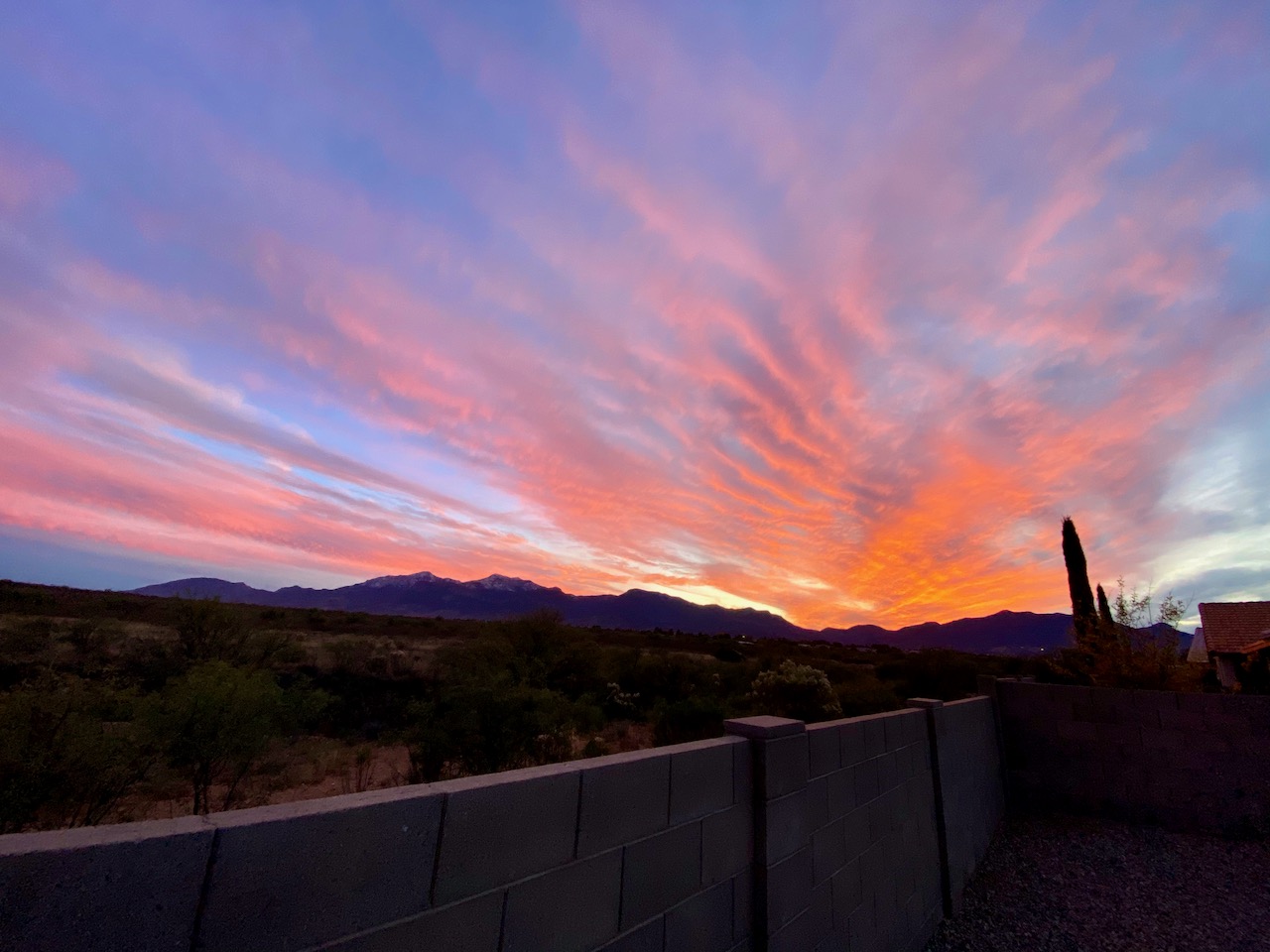 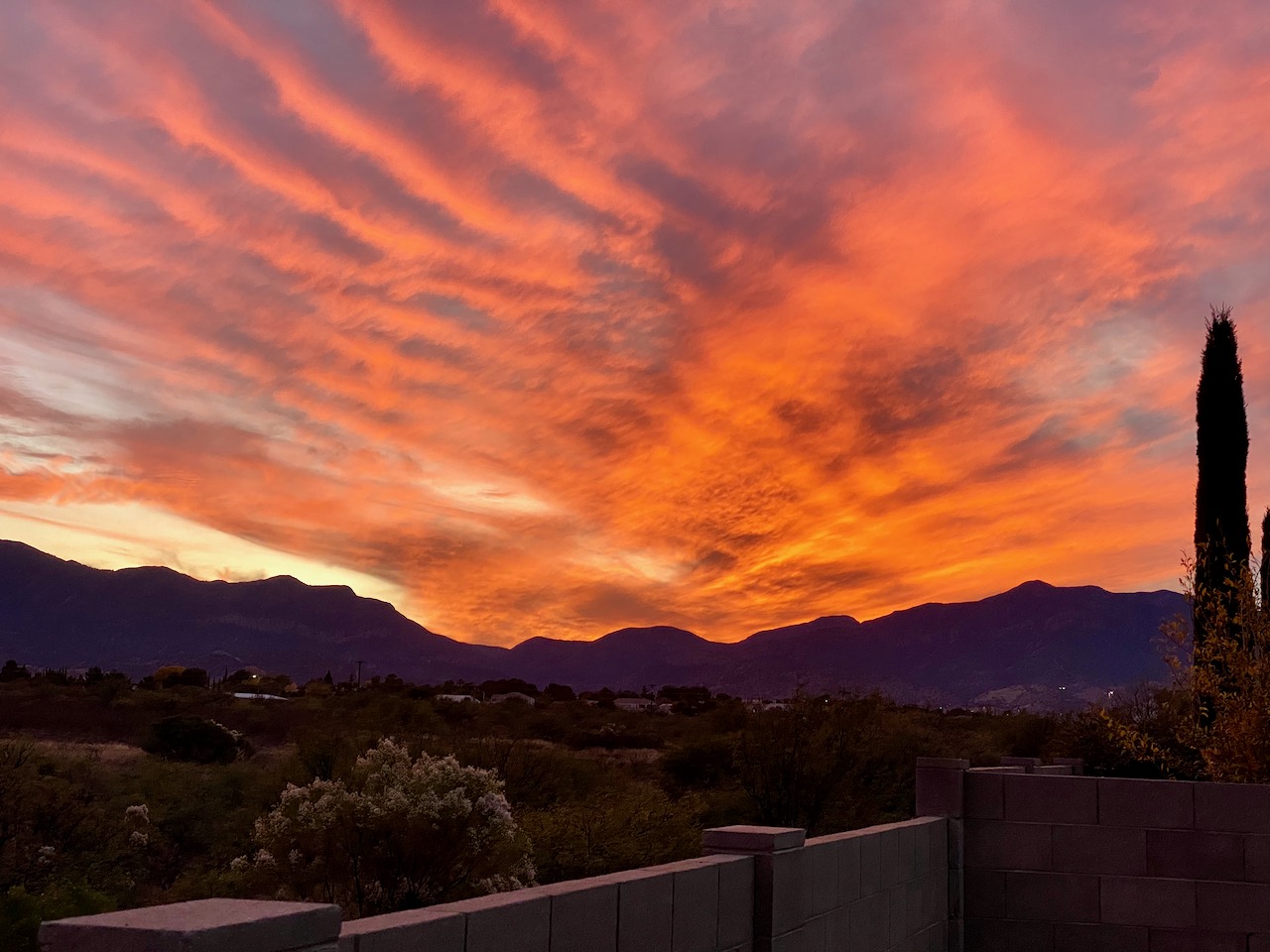 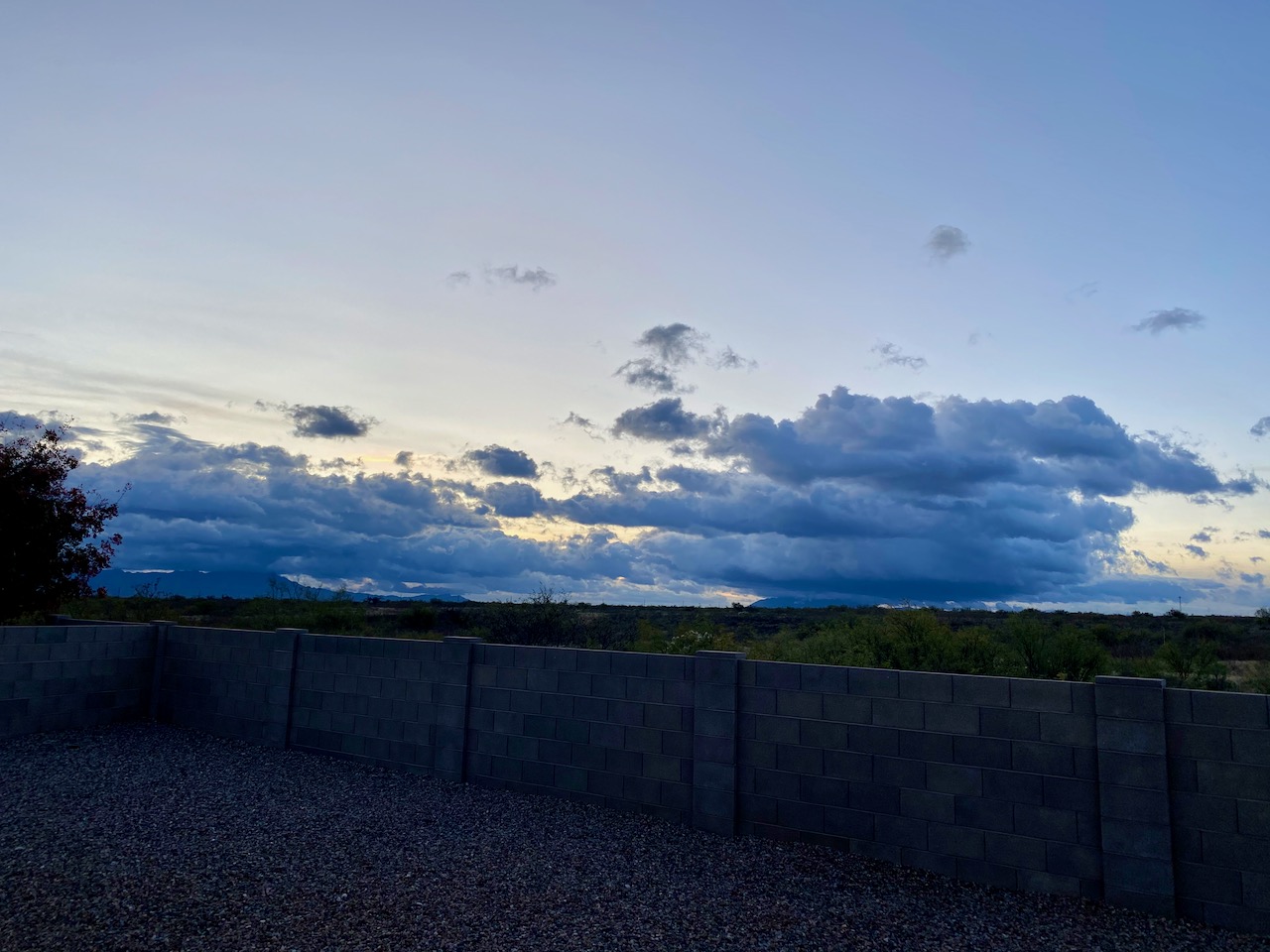 This morning was a different story. The "feels like" was 40° with a chance of rain and those gusty winds were coming back to the area. I knew then I might be taking the day off from riding the bike, which really isn't a bad thing as long as I get 4-5 days of riding in from Monday through Sunday. 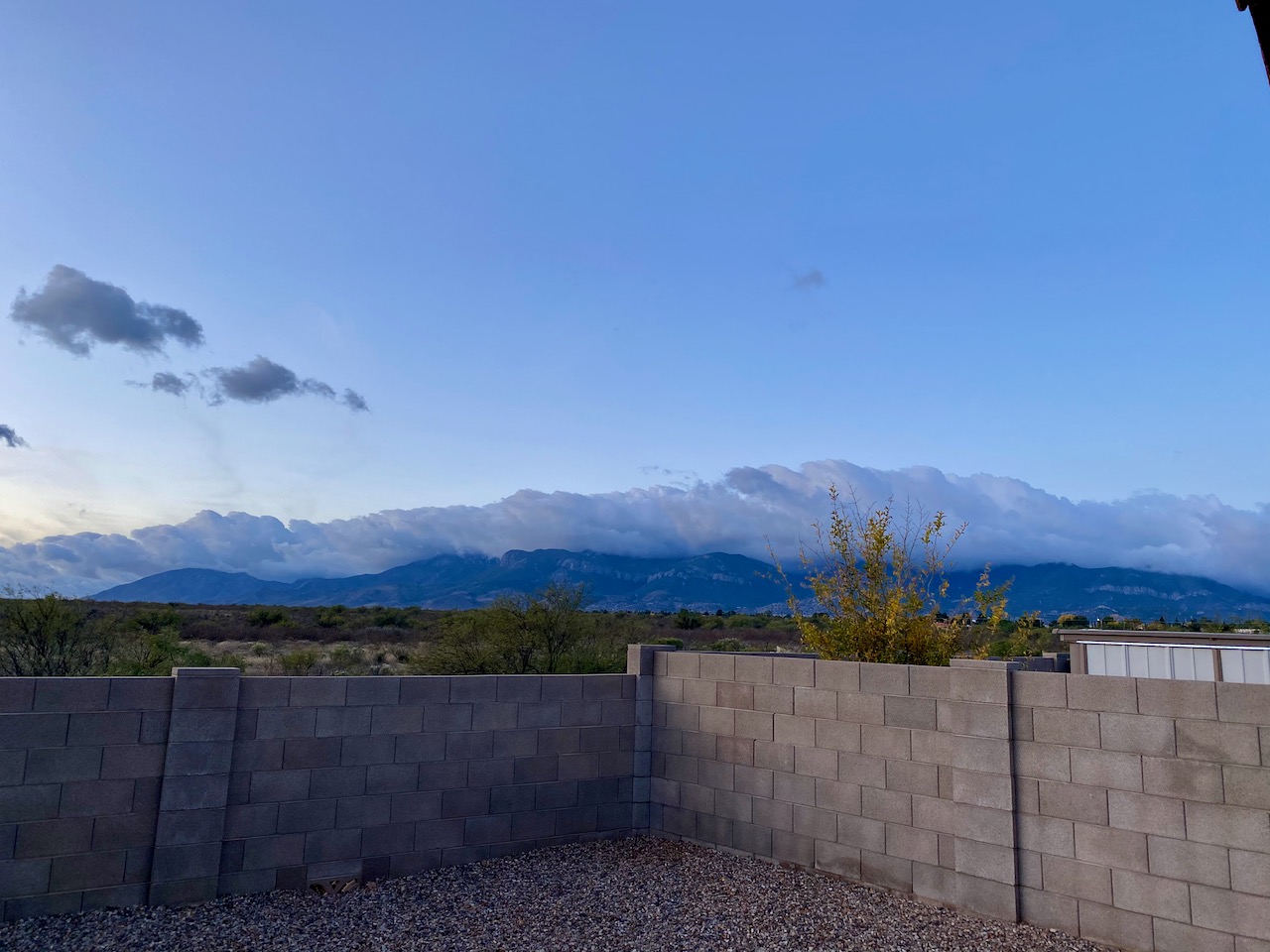 My appointment was at 2:45pm and I was there at 2:10pm as they suggested even thought I had filled out all the paperwork they had sent me in advance. The waiting was a mad house with different doctors working in the facility but the ladies at the front desk were well organized. The wait was well worth meeting one of the nicest doctors I think I've ever ran into. He was in his early 70's, a hiker of the high elevations that you see in these pictures.

He was well aware of where I ride my bike and knew the effort needed to climb the area plus fight the winds this time of year. He agreed with the number I told him that I wanted to get my weight to. I had lost 19 pounds from the time I moved here to the time I crashed. I am still about 9 pounds away from my goal and the number he suggested. We were had the same number in mind. 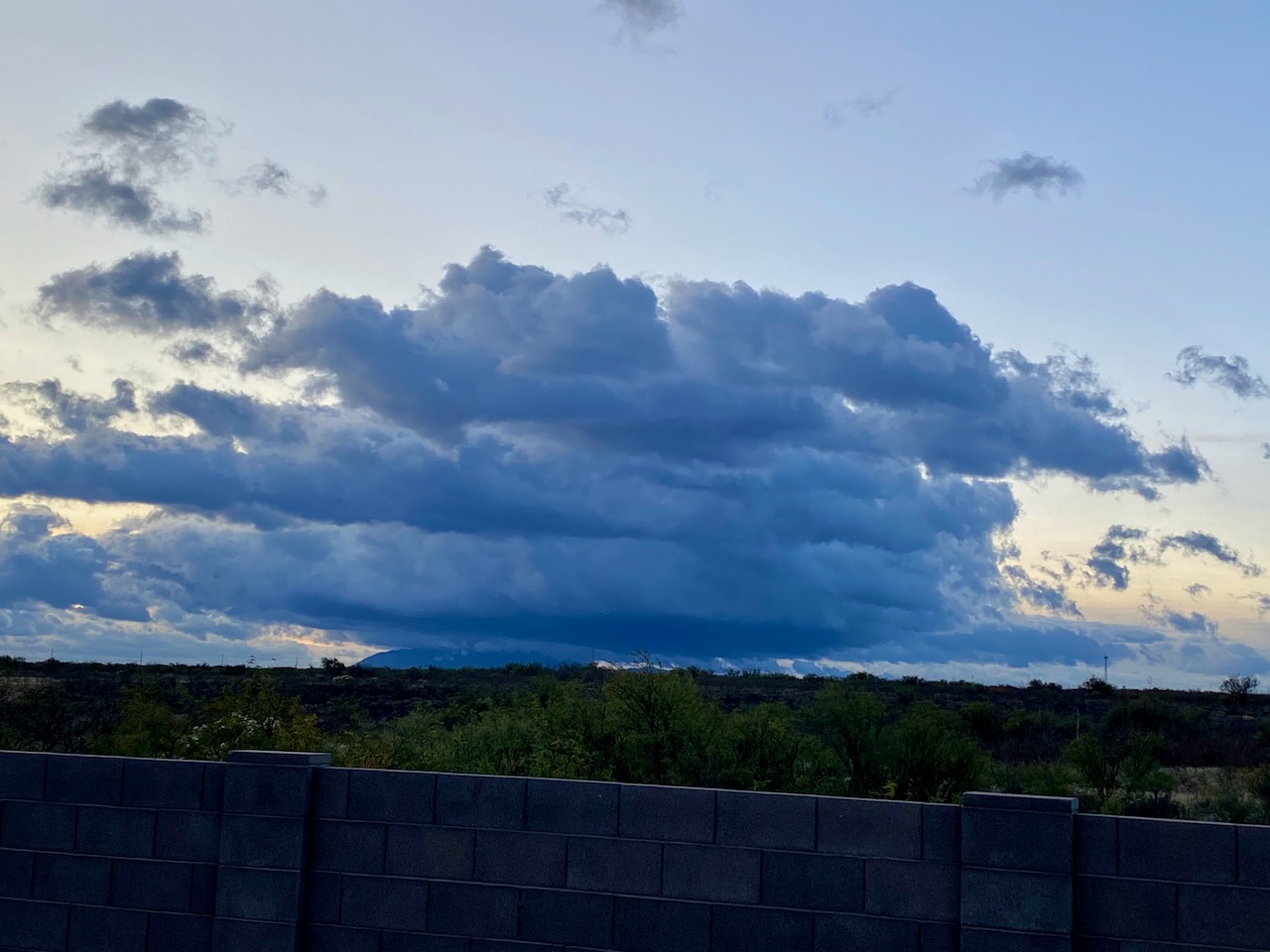 I brought my medical report the hospital had sent me last month. He read the heart information in detail and thought the same way I did after he read it. The word "Normal" shows up a lot in that report. My blood pressure was very good he said for someone my age as well as my heart rate. He told me to keep doing what I was doing. I asked about supplements, about different diets and we both agreed there also. His answers confirmed what I had been thinking for the past few years. He ordered some lab tests, exactly what I was wanting. They will check all the basic stuff to see if anything is hidden that I don't know about. 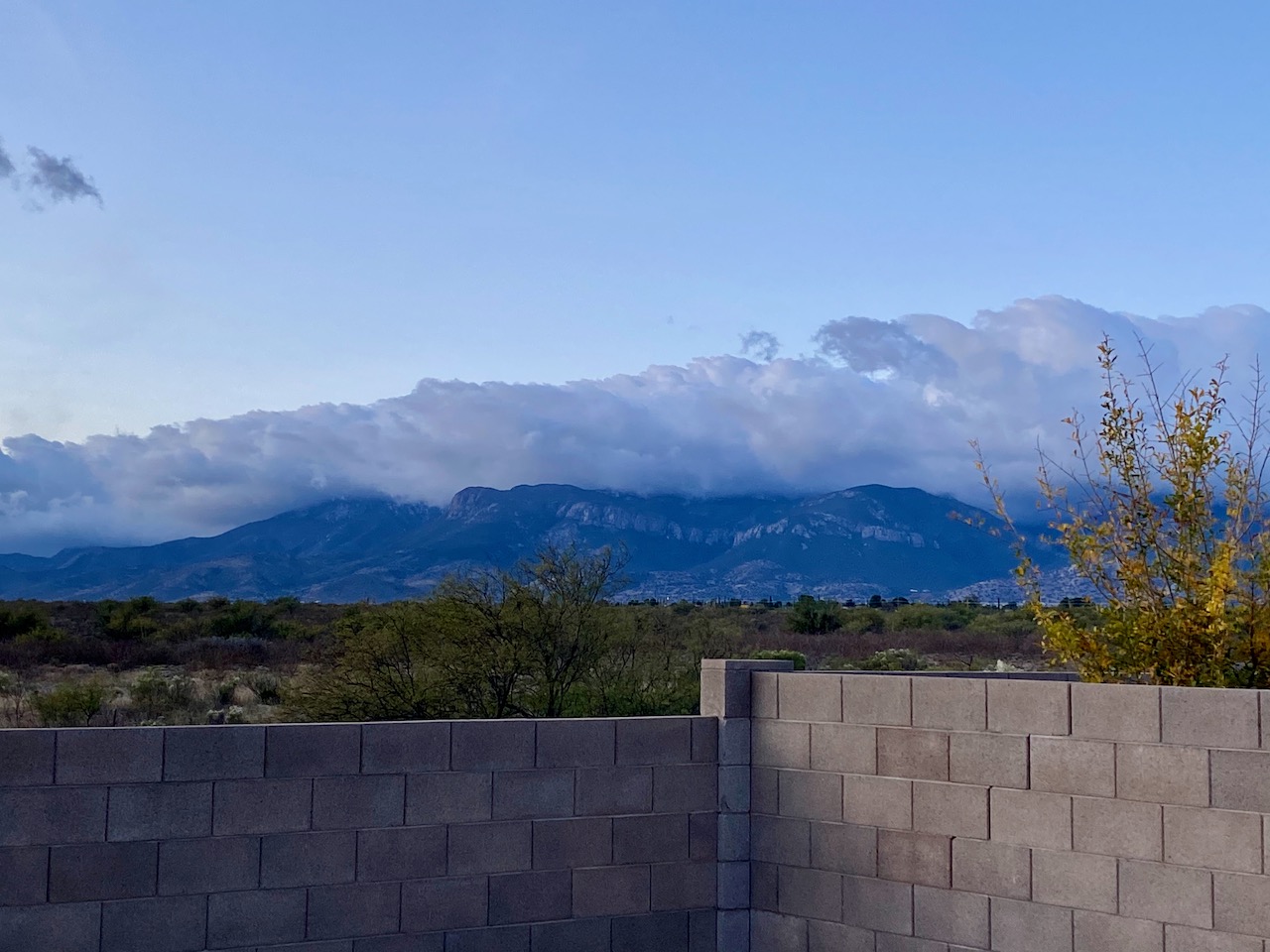 I am to see a cardiologist in 7-10 business days. I will see this doctor again in 7 weeks to go over the lab results and as he said "come up with a game plan". I was happy that I had chose him as a doctor to go see. I did tell him I've never had a General Practitioner and until my stupidity in September, I never had health issues. He told me he met another older bike rider just this week that did the same thing I did, bike slipped out from under him in loose sandy rocks/gravl ... only different broken bones and not the hip. 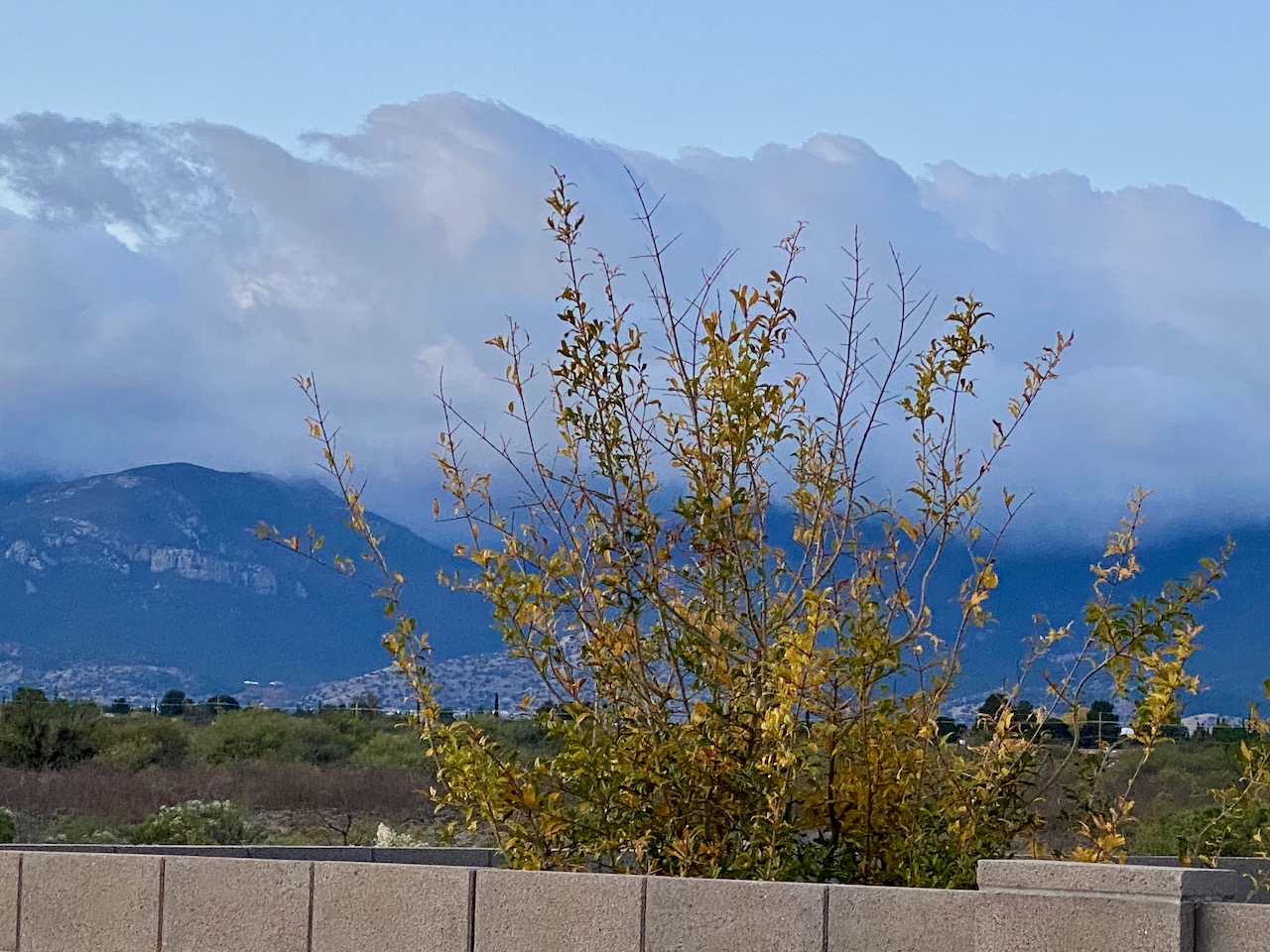 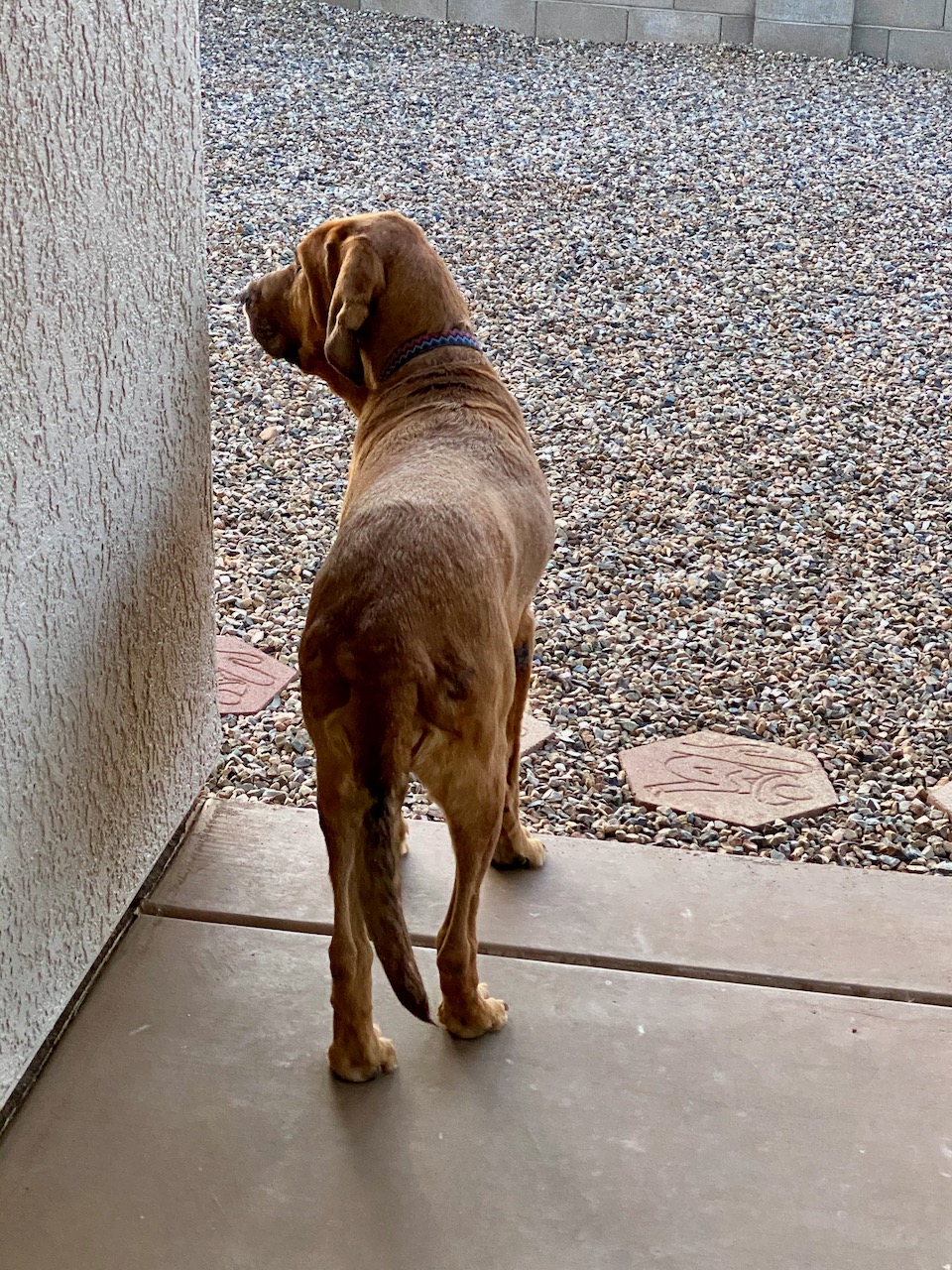 Stella has not been demanding a morning walk since the temps have cooled off. She is more interested in the crying puppy next door early in the morning. It isn't long after her breakfast kibble that she is back to sleep along with Heidi. 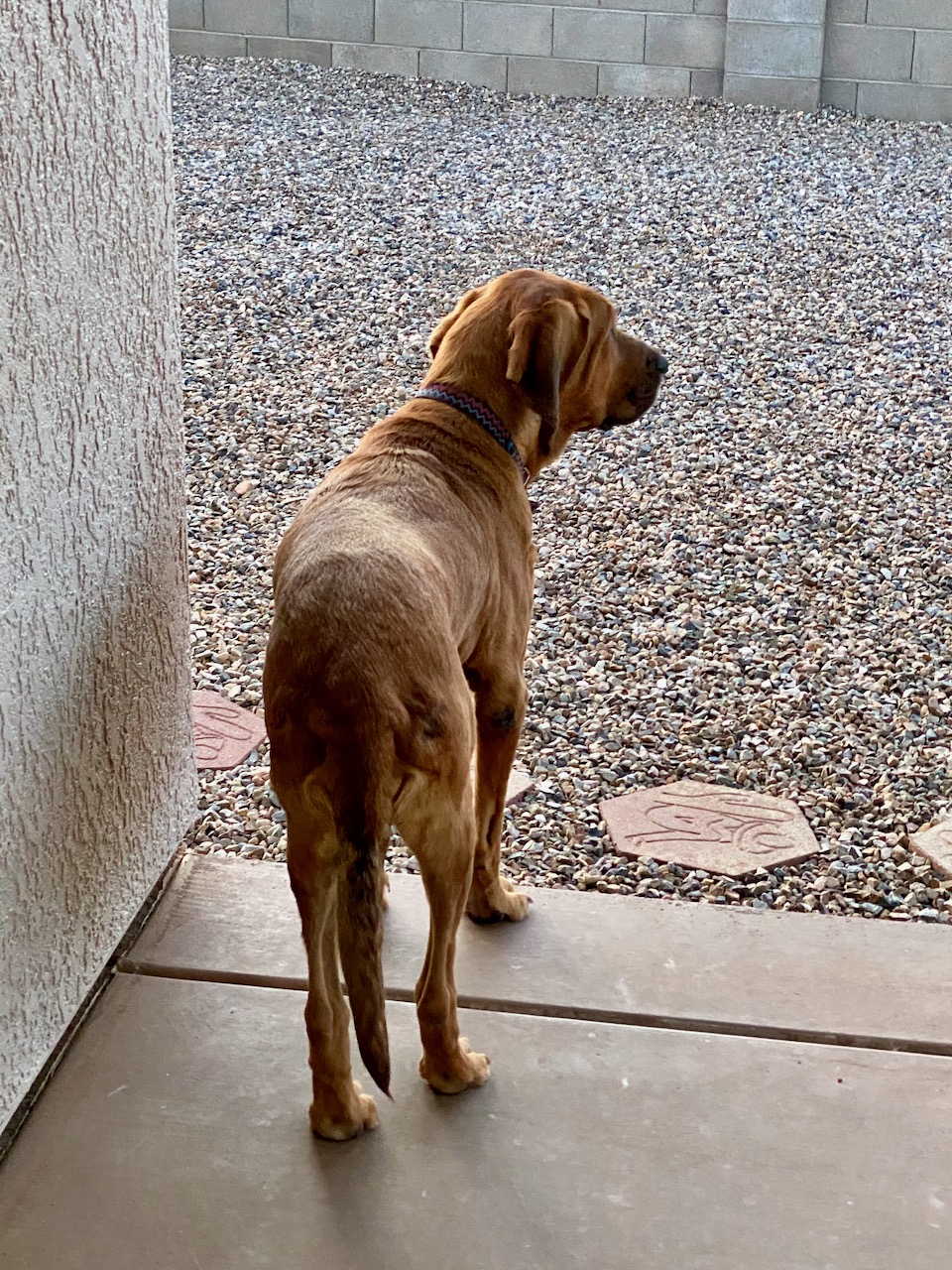 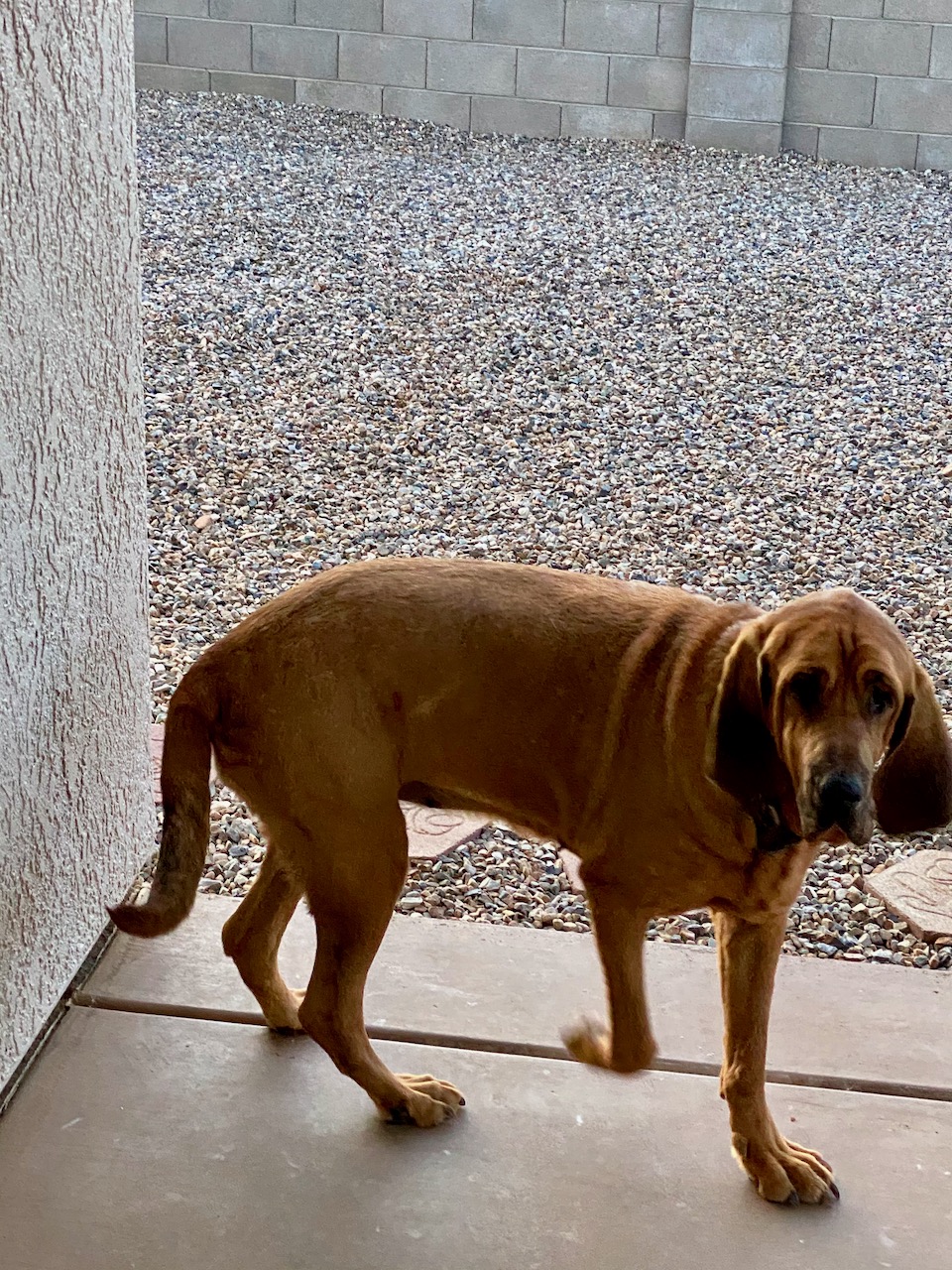 So in summary, it was good to get some things confirmed that I've had on my mind for over a year or more. I didn't think there were any issues I should be concerned about because if there were, there would be no way I could ride a bike as far and as long as I do. Plus I'd be out of breath just around the house from higher elevation than the tropics of Southern Indiana. 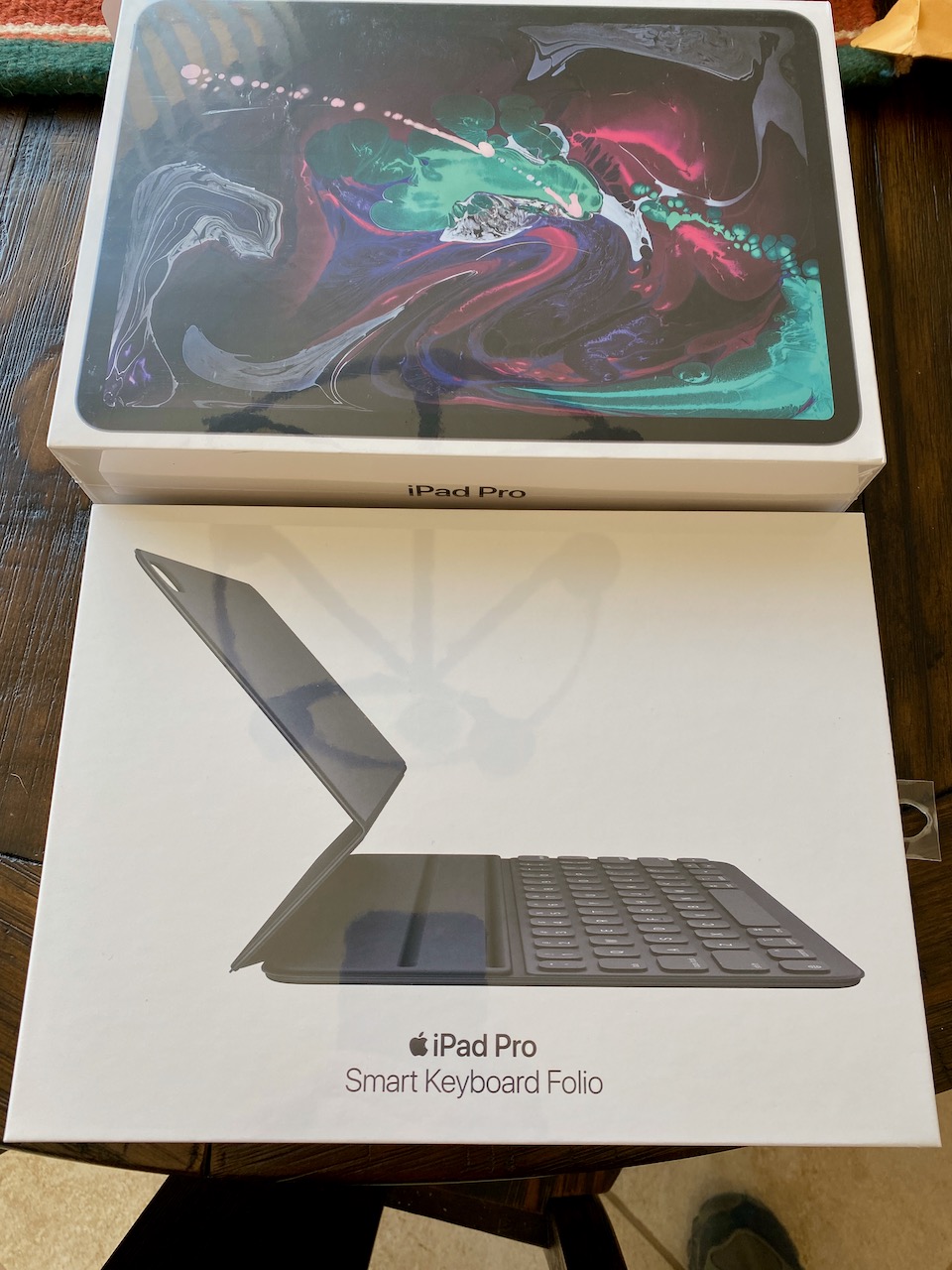 I could tell from the very start, the Dell computer was a good computer but didn't feel nor work as smooth as the quality of an Apple product. Plus Windows 10 has had a lot of improvements but it 'lagged' compared to the macOS I use on my iMac. I liked Windows 10 but the question kept creeping into my head ... "why do you need this when everything you have works?" I've been using Apple Products for 9 years not counting the 2 years in the 1990's where the business I was working for used Apple Computers.

There was no need to have 364Gb of photos loaded on two different computers running two different systems. Outlook never would deliver my email with the iCloud accounts. The Dell app that let me text and load message from my phone to the Dell worked the first day for about an hour and then never again. I had to turn off the backlight for the keyboard because I could not see the keys and the light was on at all times. Apple's will only come on when needed. The more I used it the more I felt like I didn't need it. I had cured my curiosity and decided what I had was best for me. You can tell by the texture of the material the iPad keyboard covered, it's different than the typical old rubber portable keyboard. It is faster than my 4 year old laptop. The keys are normal size. 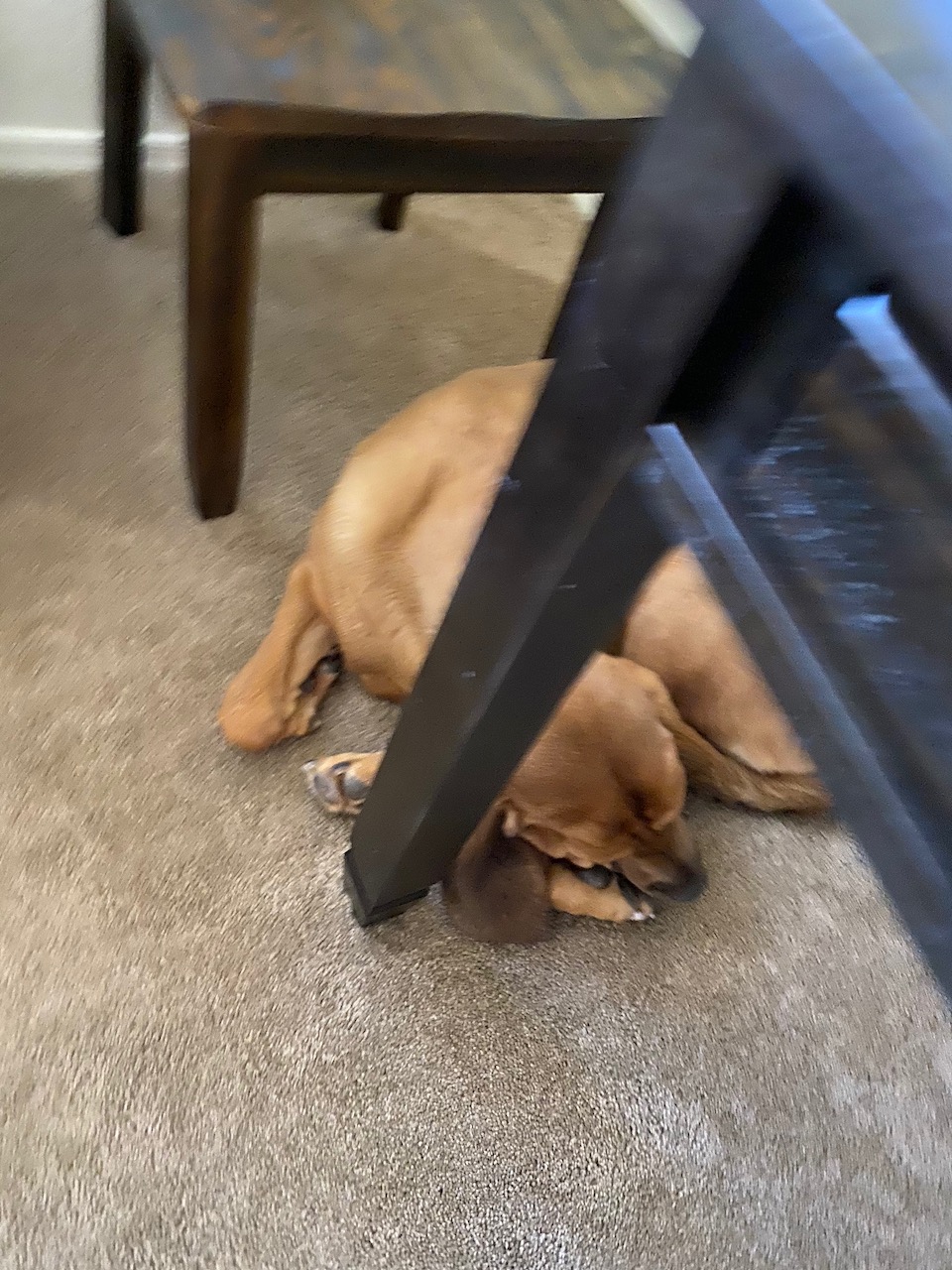 It's better than the iPad mini to take with me when traveling. Plus my Mini does not have a keyboard and I hate typing with any on screen keyboard. It's just an inch or two smaller than my laptop but faster since it's new and had a faster processor, lighter of course. The way the keyboard has worked out this afternoon I can see the new iPad Pro 11" replacing what my laptop does ... except transferring all my Mahjong game results. I've spent years trying to get all 160 games completed under 3 minutes.

See the chair behind Stella?? There is a reason for that. That corner of the room is one of two favorite places she likes to sleep. But in the past few weeks she decided her new thing laying down was going to be leaning against the wall and sliding down to the floor slowly. The problem is, on that wall that she wanted to lean and slide against, has my cable connection from outside to my computer. Luckily the installer tacked the cable along the baseboard to behind the desk.

There is a couple of inches of cable sticking out from the wall connector and all I could imagine is 90 pounds of bloodhound sliding down the wall and bending the cable at the point of connection to the internet source. So, I put a spare chair in front of that cable connection to protect it and keep my sanity.

Amazon just delivered my first pair of house slippers I've ever had. Rubber soles on the bottom so I don't sleep in tile floors and sheep skin lined to keep my feet warmer than they have been since in the winter tile floors get cold. I do turn the heat on but for a very short time early in the morning and that is all that is needed. Now I can set out the trash can on Monday mornings without changing clothes ... I can look like I just crawled out of bed with my slippers on, even though by that time I have been up for hours and have at least two cups of coffee running through my veins.  LOL

In case the week passes by too fast ... I want to wish all my readers a Happy Thanksgiving and enjoy all of the food that is prepared. I don't every year but this year I am starting to feel like cooking the meals I see on tv, have had in the past with family ... I can cook everything that is listed but then I eat too much, like non-stop, then live on Tums for a few days since there is that much food available. It's hard to follow a recipe for just one person so I cook enough for 4-8 people ... LOL

I'll pick up a new bottle of Tums when I go to the store to buy all I need to put that meal together.