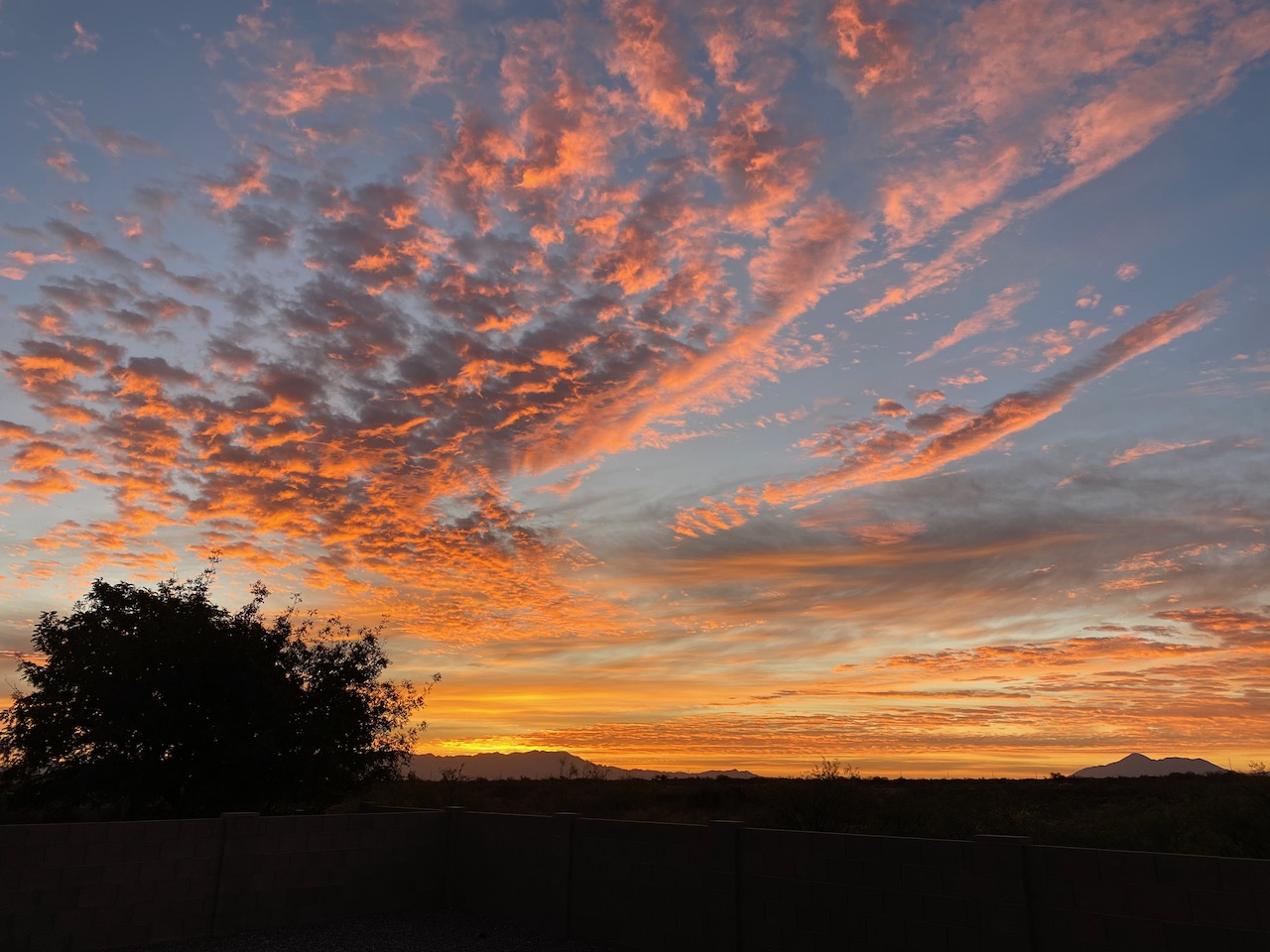 Saturday morning we woke up to the best sunrise I have seen since I moved here June 13 and that is saying a lot because it seems almost every day there is one that ranks at the top of the list of sunsets. I am ecstatic that I live in this area. That is looking towards Bisbee and the Mule Mountains to the left ... the mountain on the right resides across the border in Mexico. It was a chilly 42° Saturday morning but Stella and I got our walk in while Heidi stayed home in a deep sleep after her breakfast. 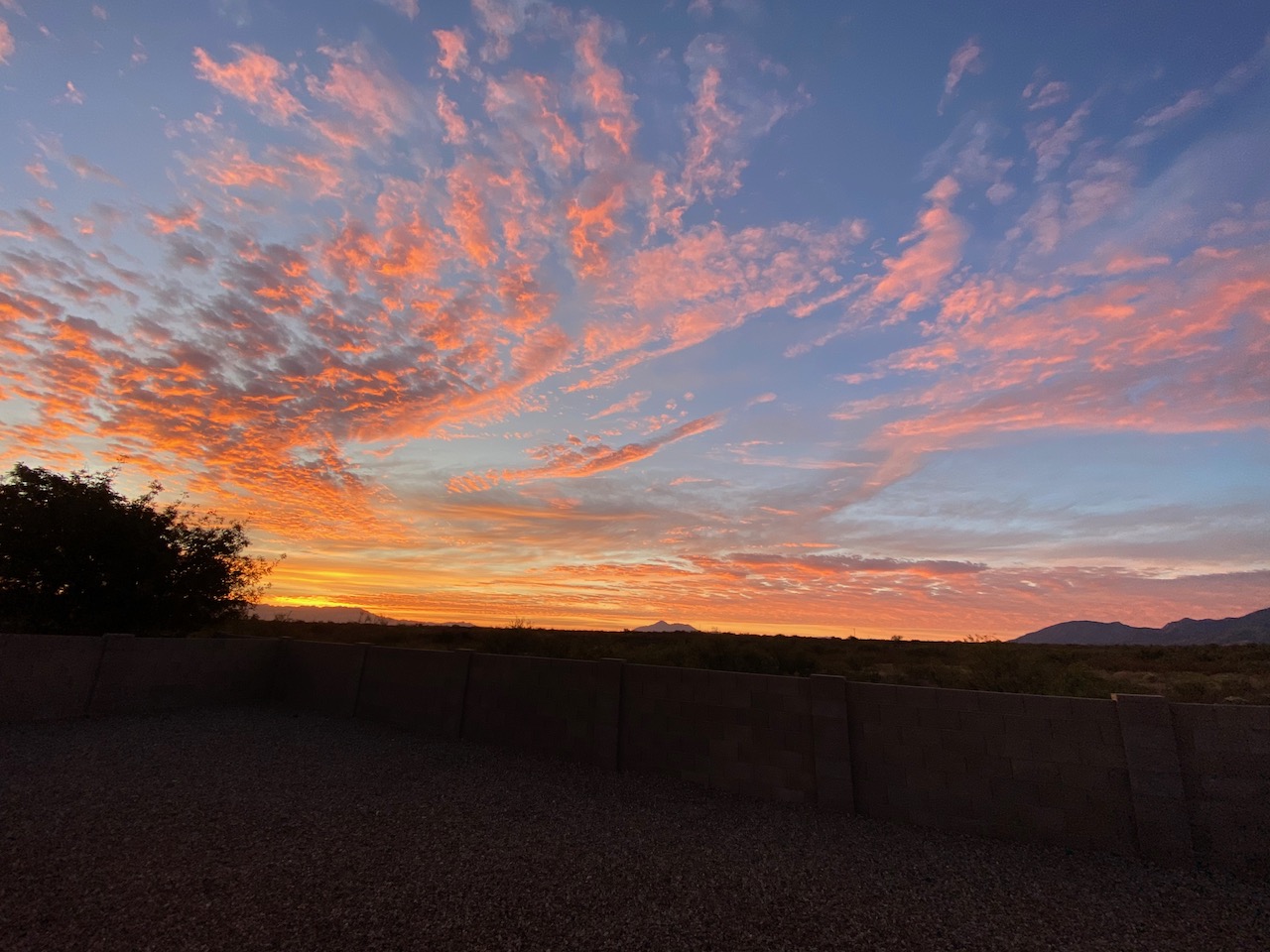 The only plans for Saturday were "Football Saturday" and I was going to change the handlebar tape on two of my bicycles because I did not like the color that came with two of the 'used' bikes that I have recently bought. The hounds would sleep, I would sit on the couch watching games with me standing up to stretch during commercials and walking outside in the backyard during halftimes. 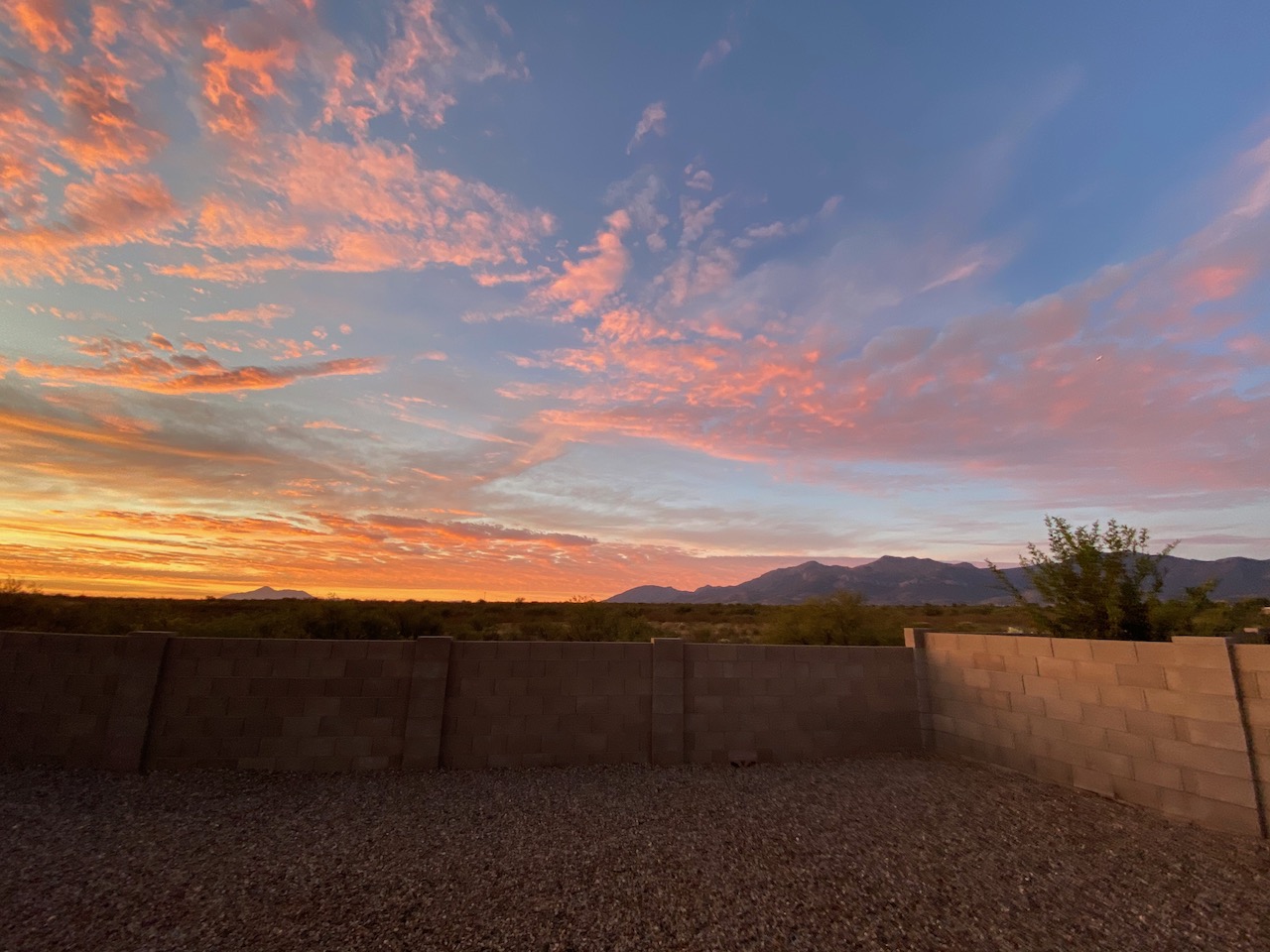 It might be fall and each morning is on the cool side but by mid-afternoon it's up in the high 70's making it perfect weather. Some that know me have been sending me photos of 4" of snow in their backyard or screen shots of their weather from the Midwest. I do NOT miss Southern Indiana weather !!! 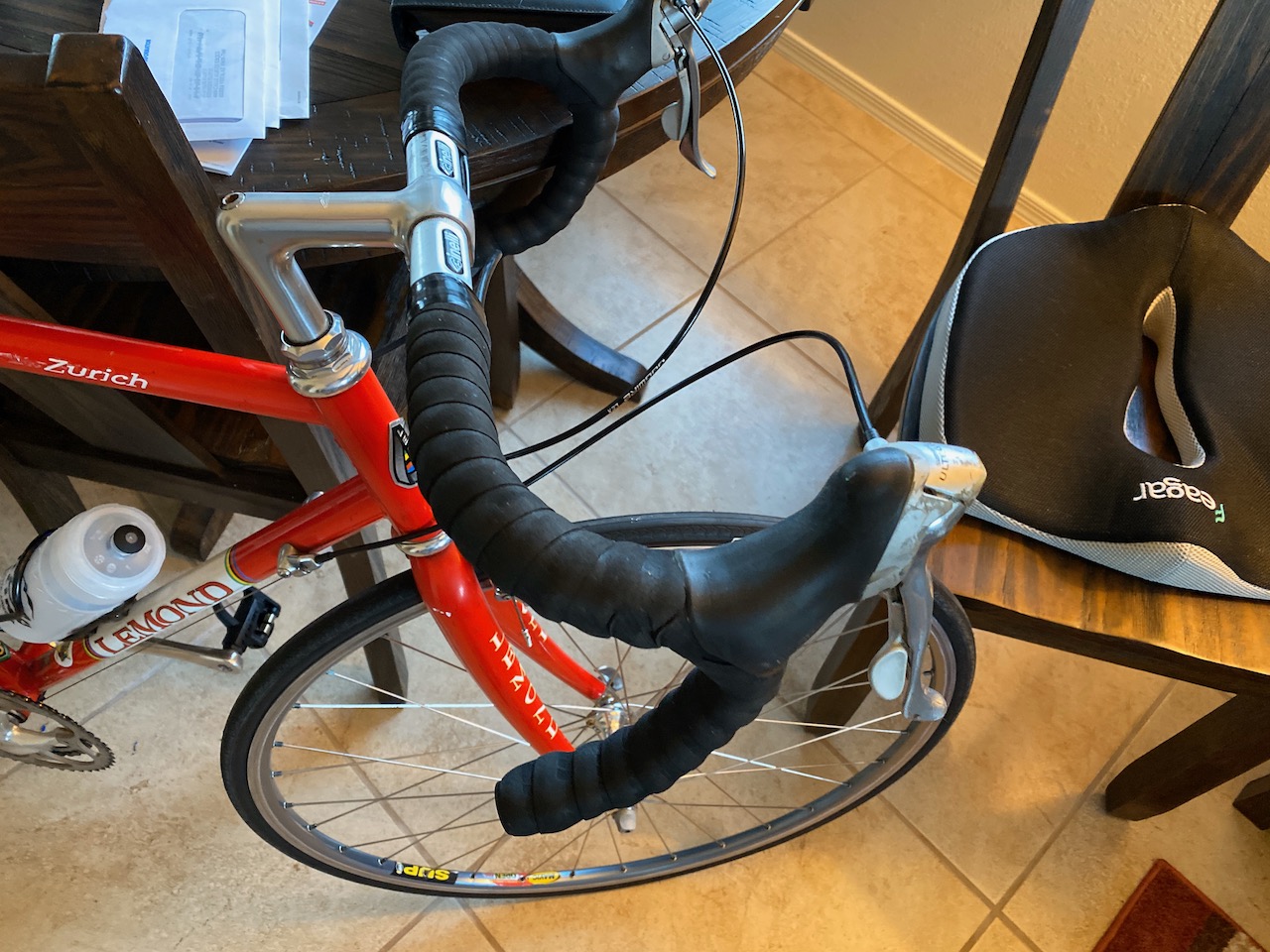 When I bought the 'used' 1994 LeMond Zurich a few days before my bike wreck and surgery, I never liked the black tape but that seems to be "today's" color in the bike world. I am not sure how I pick which color I want but I know for this bike it wasn't going to be black. Looking through my 'downsized' storage I find a brand new box, never opened, handlebar tape in the exact color I want ... White. This bike will now look just like the Romic. 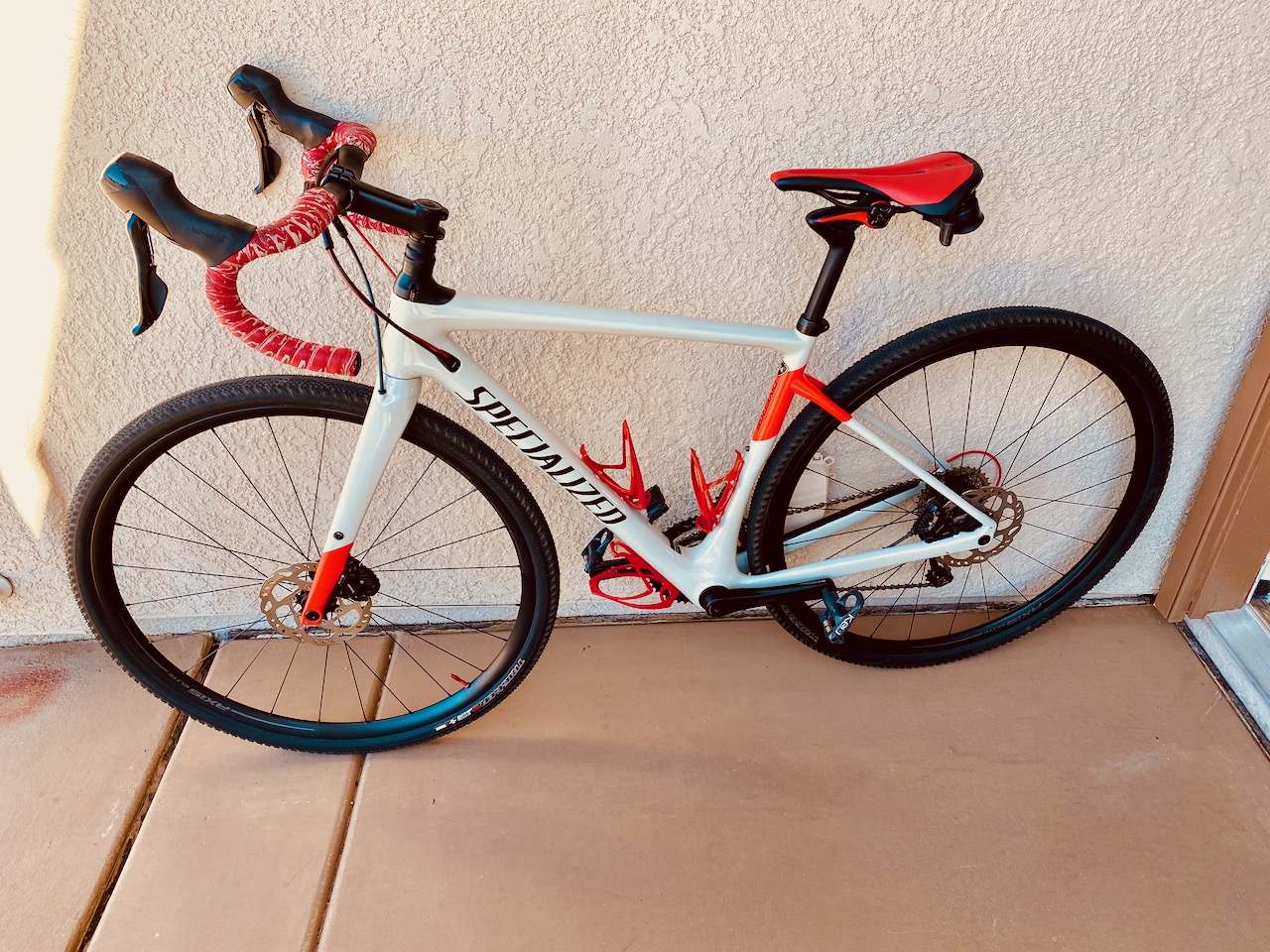 Before I even knew this bike was for sale, I knew if I had owned this Specialized Diverge Comp I would have taken off the lowest water bottle cage and I would change the handlebar tape to black. To me, this bike was meant to show those orange highlights just as they are on the frame, not to add to them. I found out later from the owner that the lowered cage wasn't for a water bottle but a small tool kit and spare inner tube in addition to what was under the seat ... for his 100 mile rides. 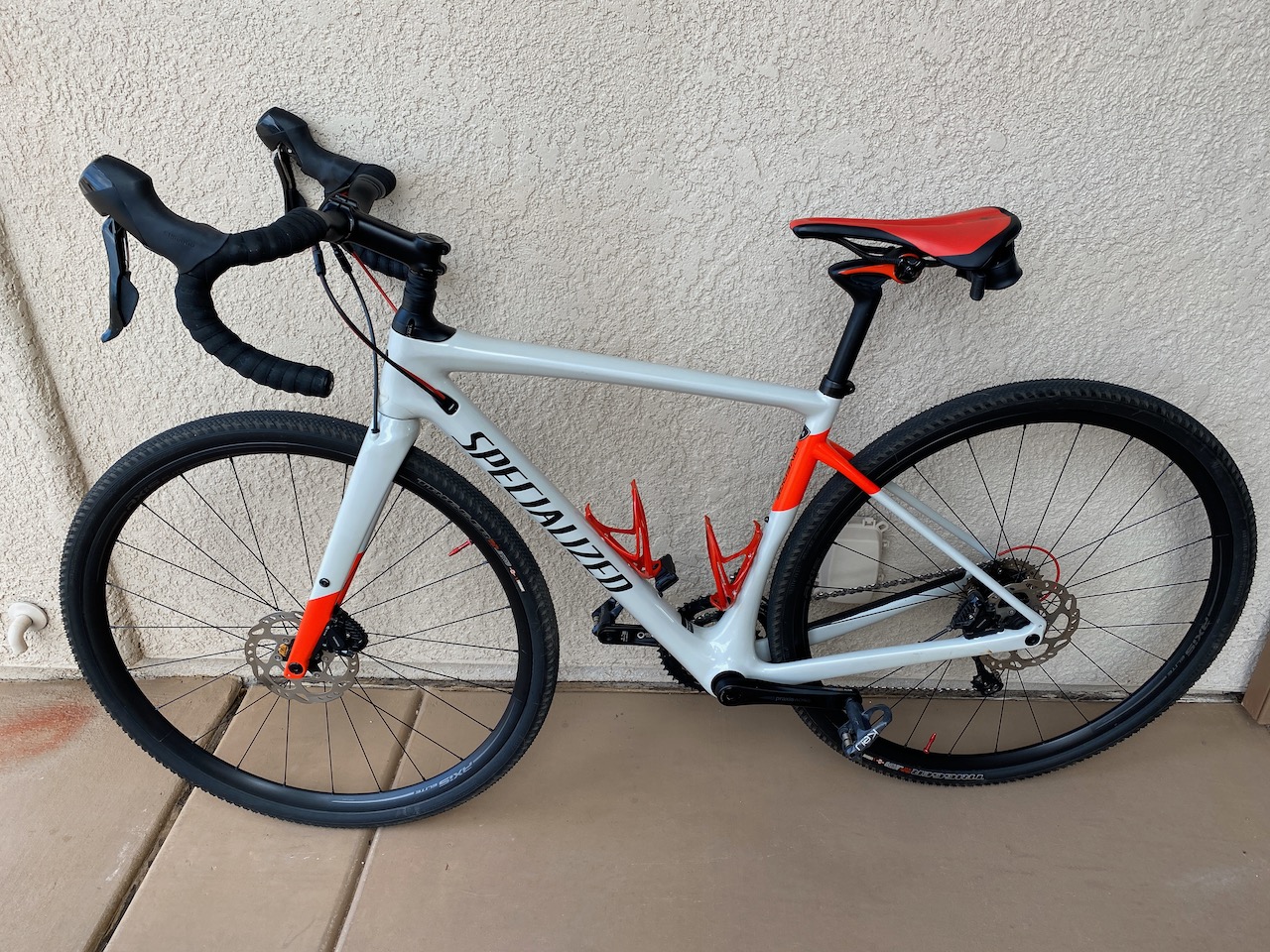 Water bottle cage removed and black tape. If the seat didn't cost so much I would buy the same model of seat in black. 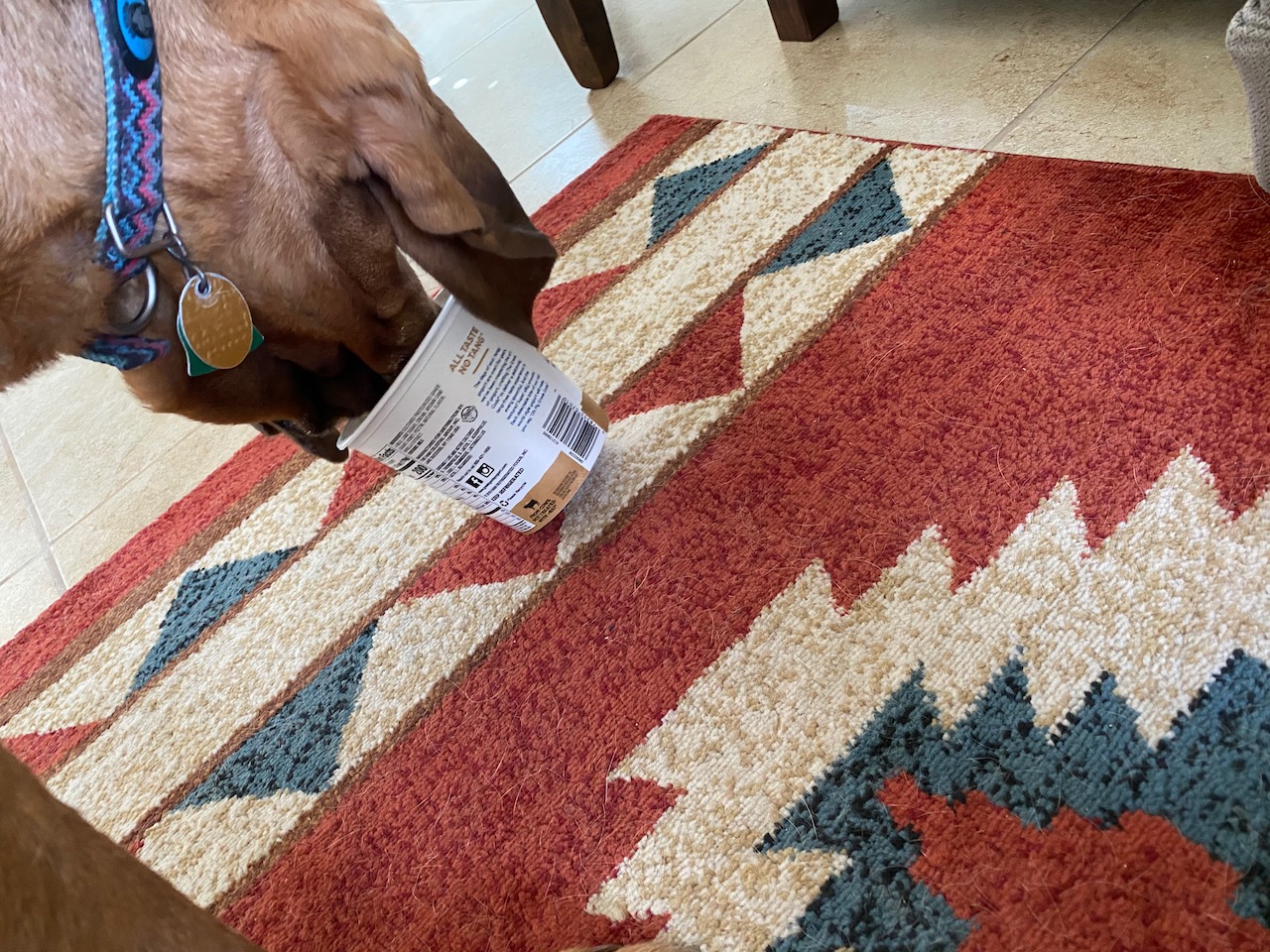 With Heidi in her bed in back for most of the night sleeping, that meant Stella would get all the rest of the Greek God's Honey Vanilla yogurt and would eventually clean out the container like nothing was ever there. 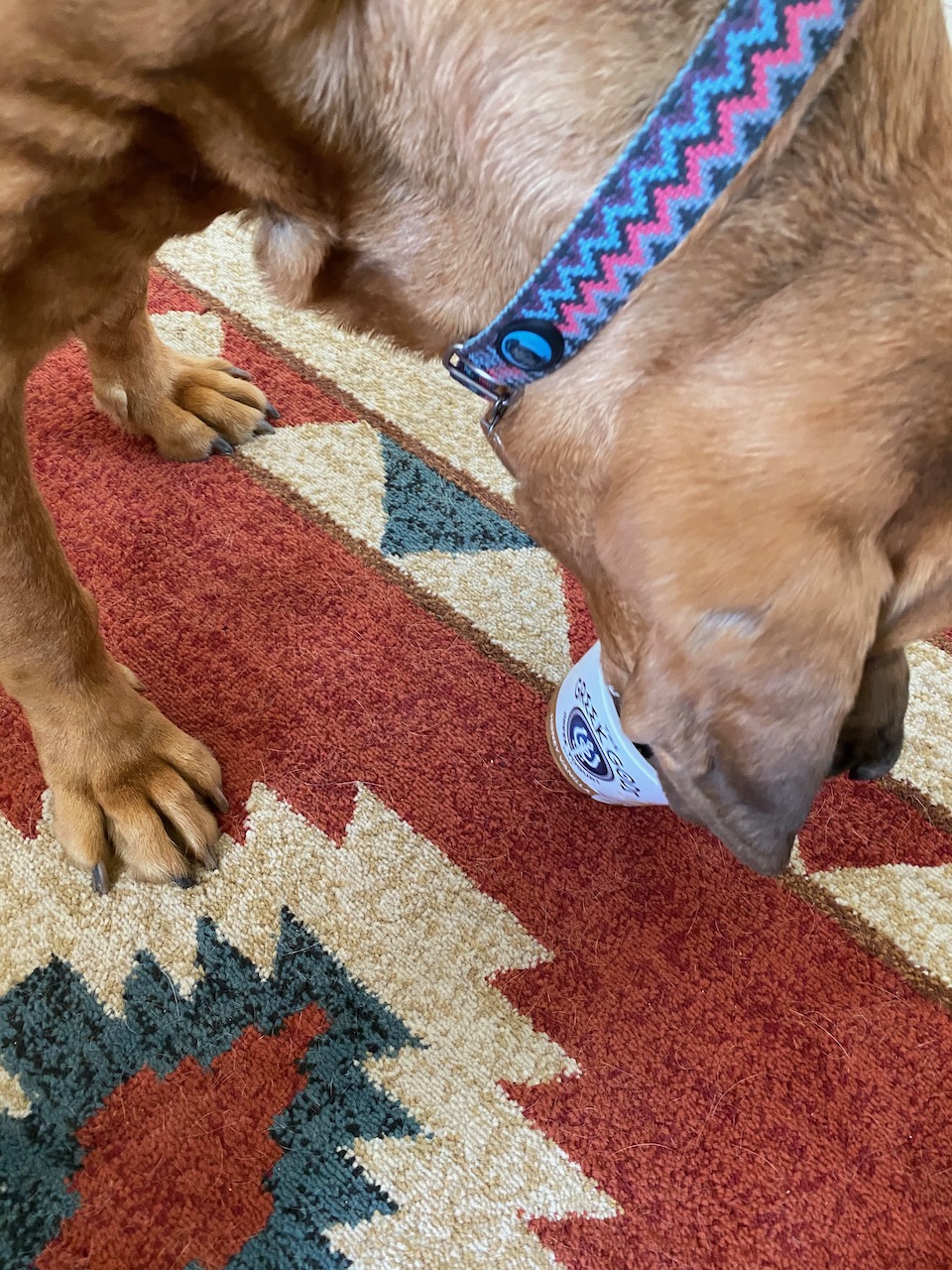 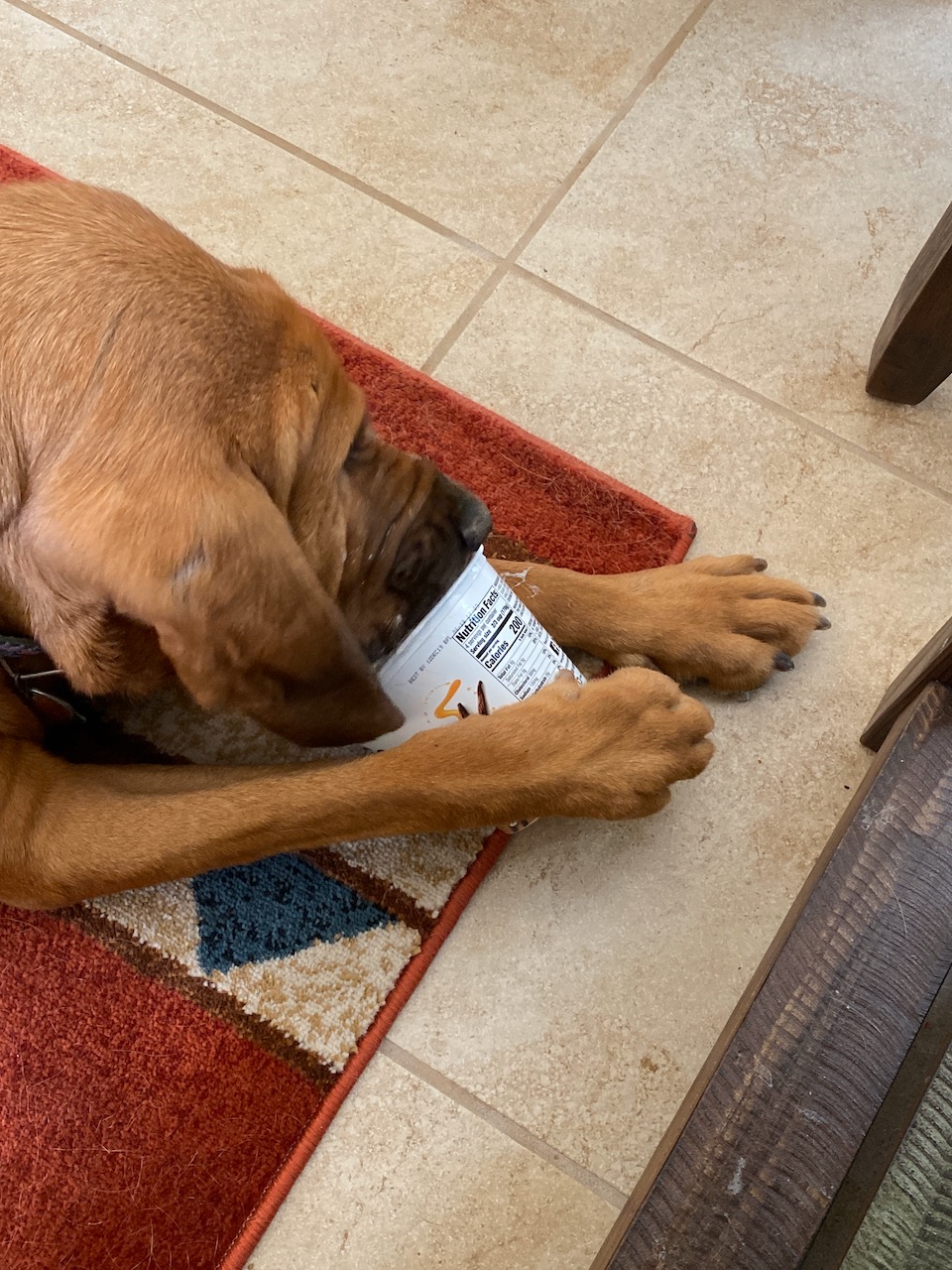 Again this week I found out the long hours of sitting down, even with the short breaks of standing up and walking around, probably make my hip area sorer than anything else I do. I get up three or four times while putting a blog post together but the hip is getting more flexible with those side kicks out to the side. NOT hard kicks, NOT kicks at all but just lifting my straight right leg out to the side and upward a little. 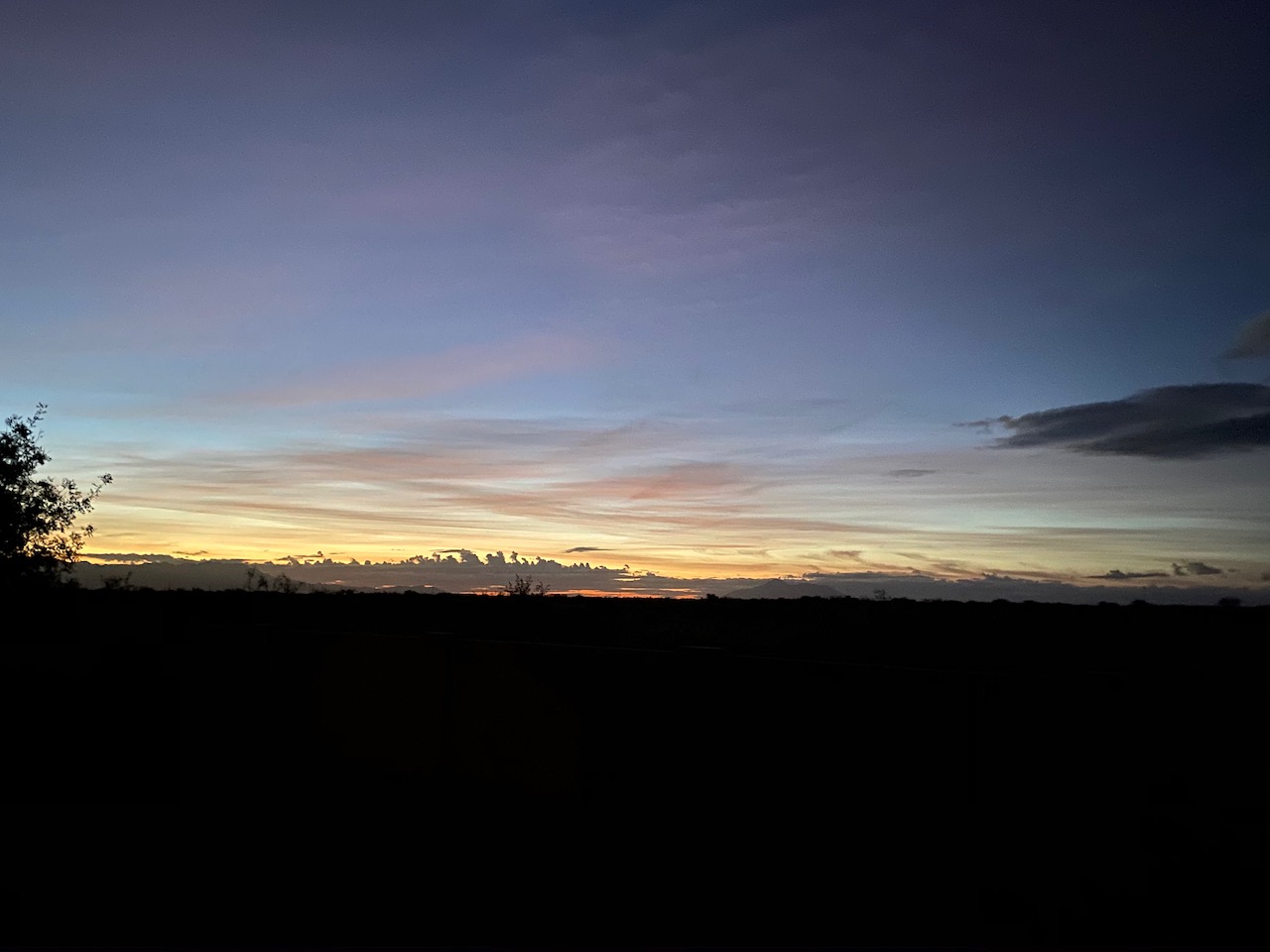 This morning skies were entirely different. Every morning is different with most of the afternoons the same. I like the variety. At least I don't glance outside and see snow flurries passing the window and temps in the single digits. :) 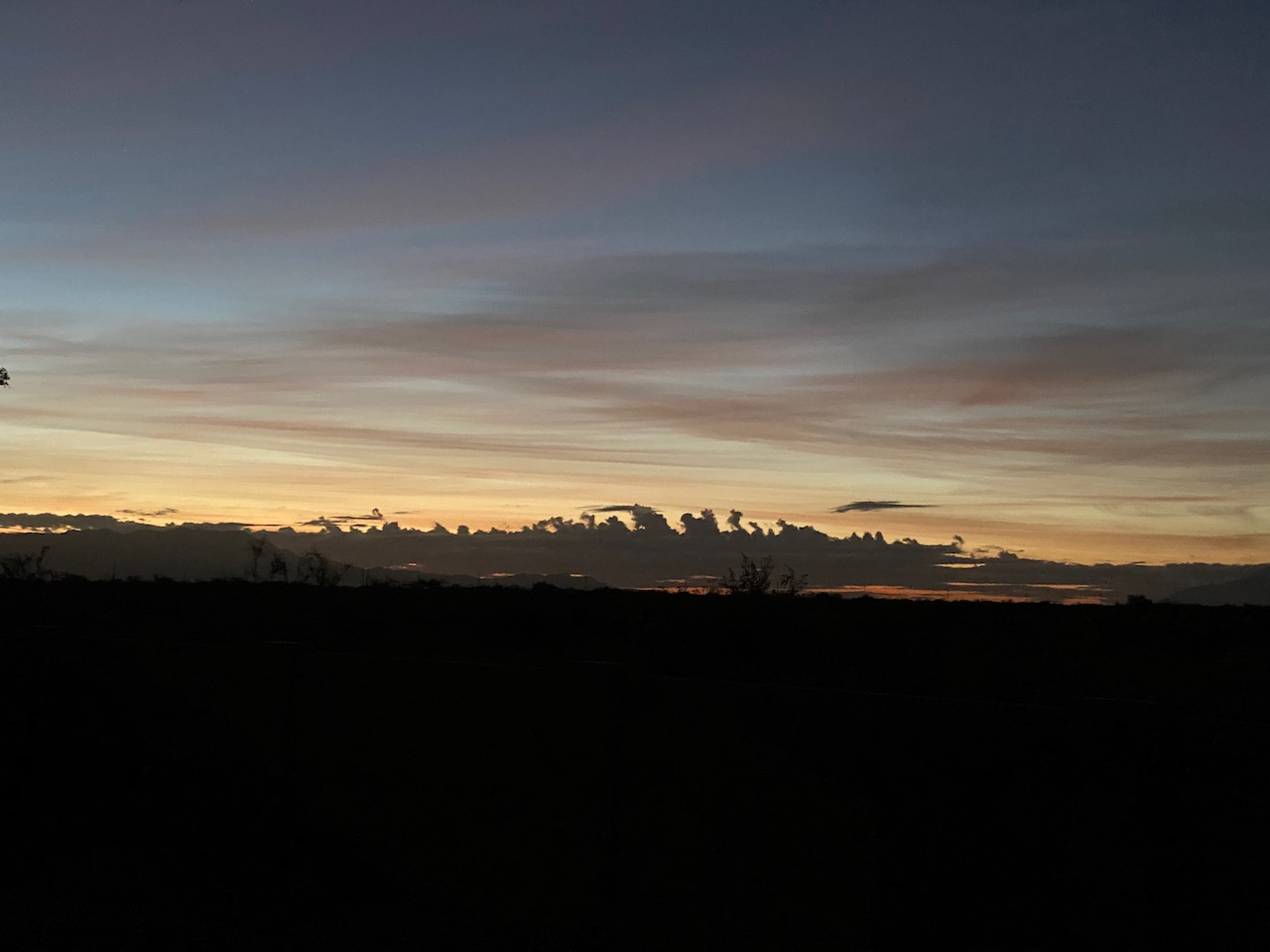 Little did we know that we would see a very very curious coyote on our morning walk this morning. We had made the turn around the vet building and as soon as we got on the sidewalk Stella pulled out that 25' of retractable leash like she never did before.  Just like that it zipped out 25' and I had to hang on unless I wanted to be part of the sprint. It stopped her and when I looked ahead there was a coyote standing in the nice mowed grass of the vet building staring right at Stella.

It would trot away then stop and look back at us while Stella and I did a very slow walk. By the end of the street the coyote took off running in the brush when Stella got there I wanted to see what she would do. She tracked the ground, went the right direction then when I stopped her, she raised her nose to the air and sniffed the scent of the coyote that was there just minutes before.

That is now three coyotes we have seen in two different occasions in the last 4 months. They were howling/crying in the vacant land behind my house an hour or two before sunrise this morning. 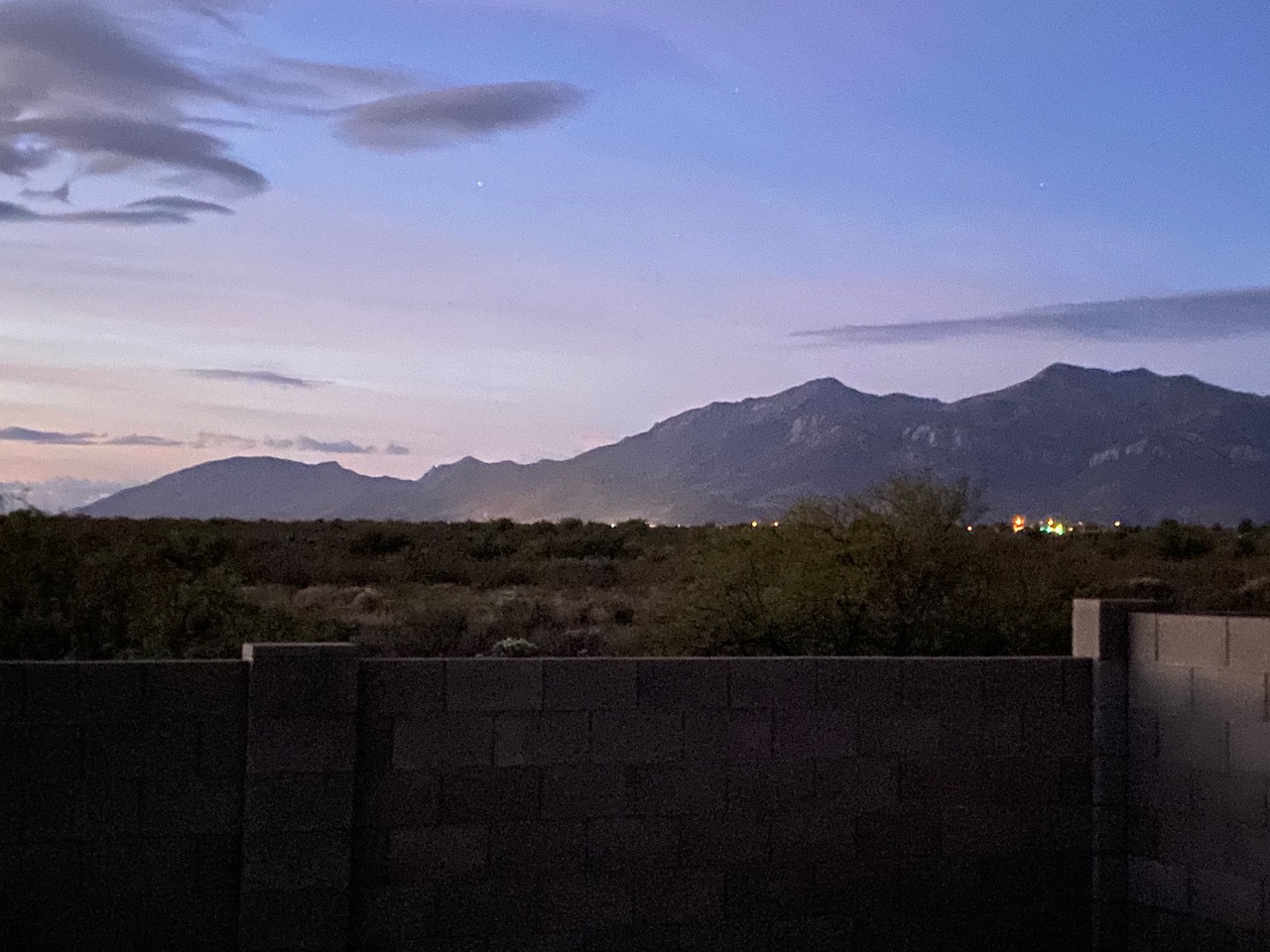 The skies were darker than the iPhone camera captured ... That is Hwy 92 where the lights are. 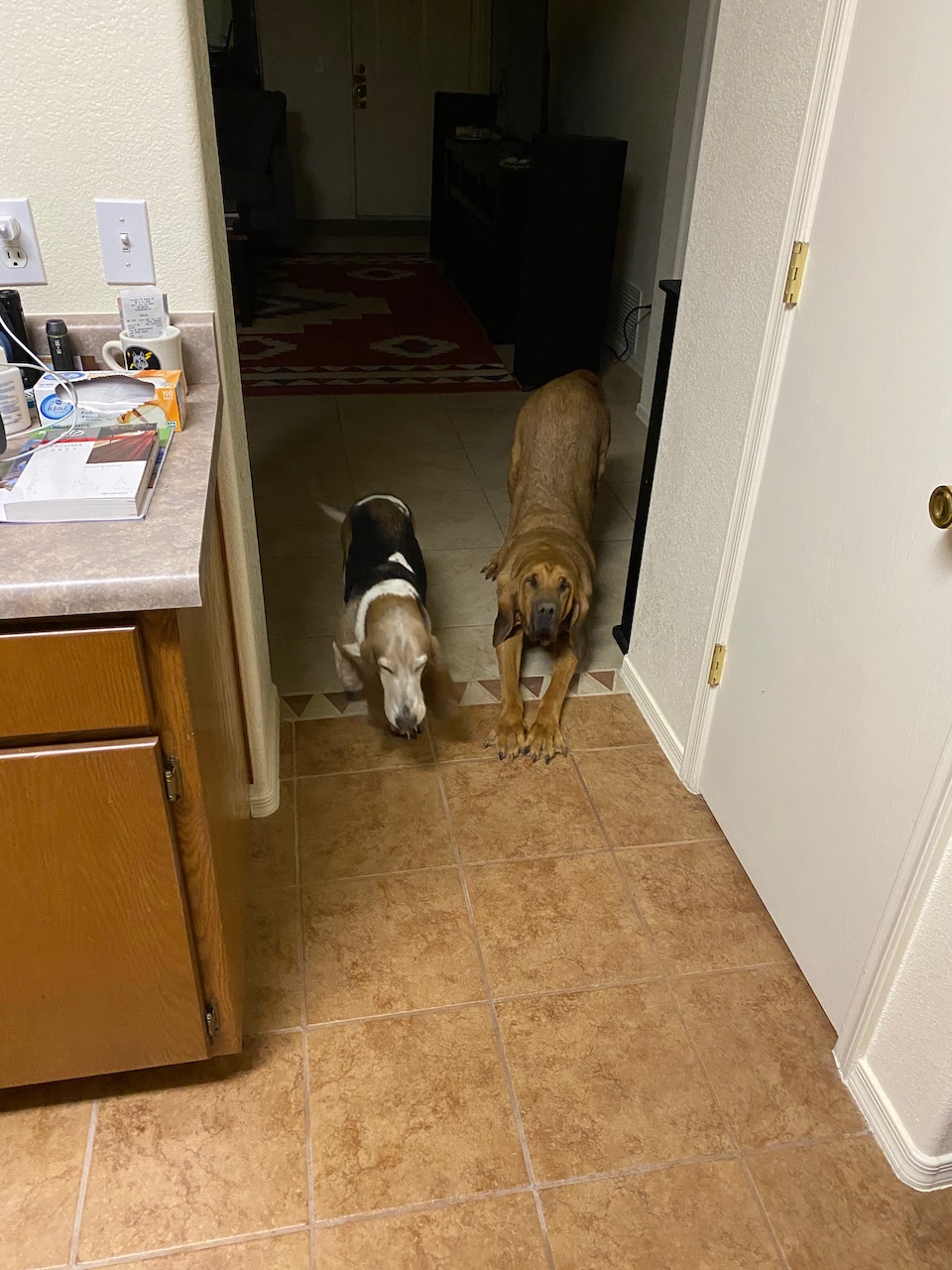 When the hounds think they are minutes away from being fed morning breakfast ... here is a pretty normal sequence, minus the howls and barking. 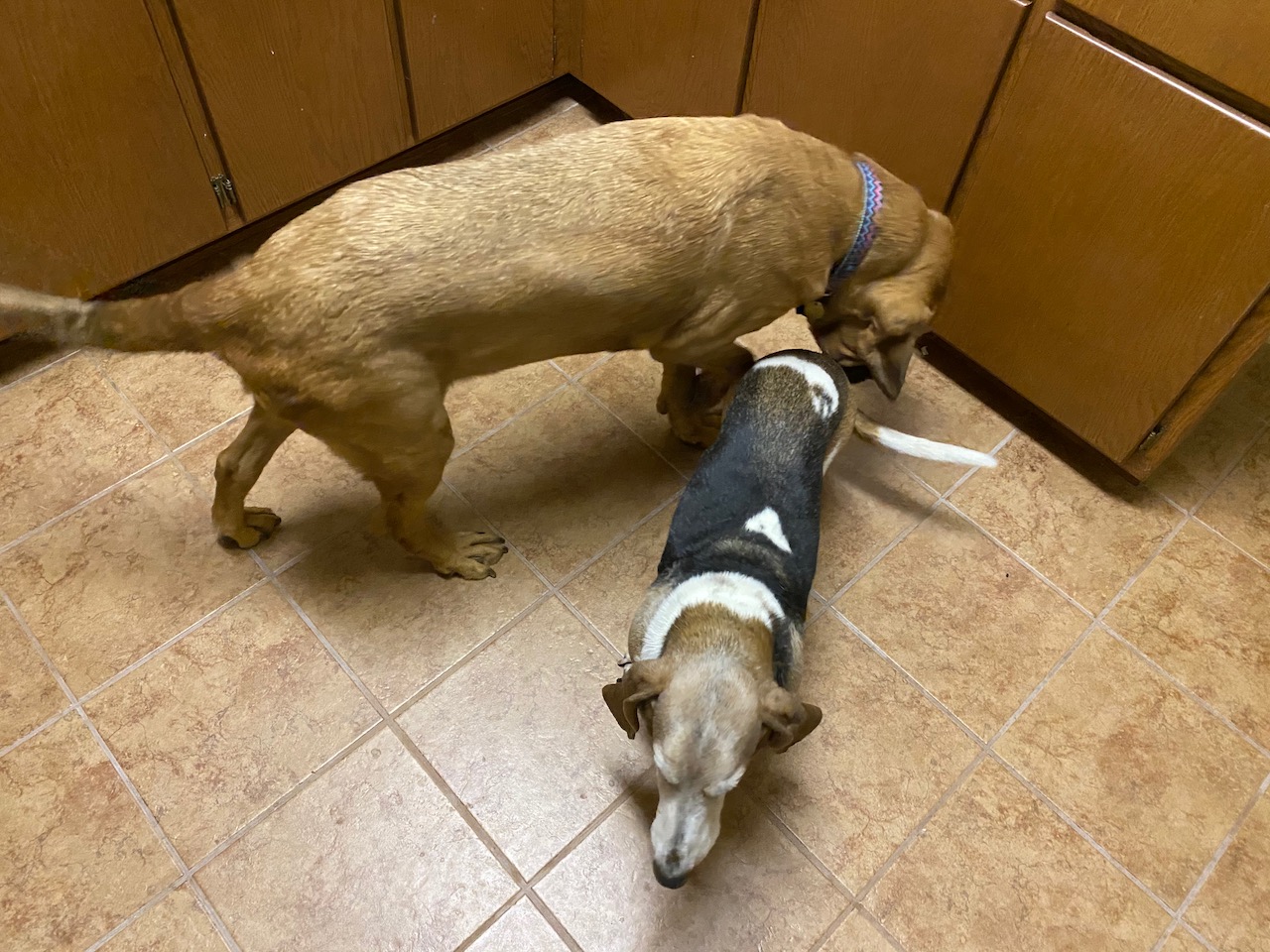 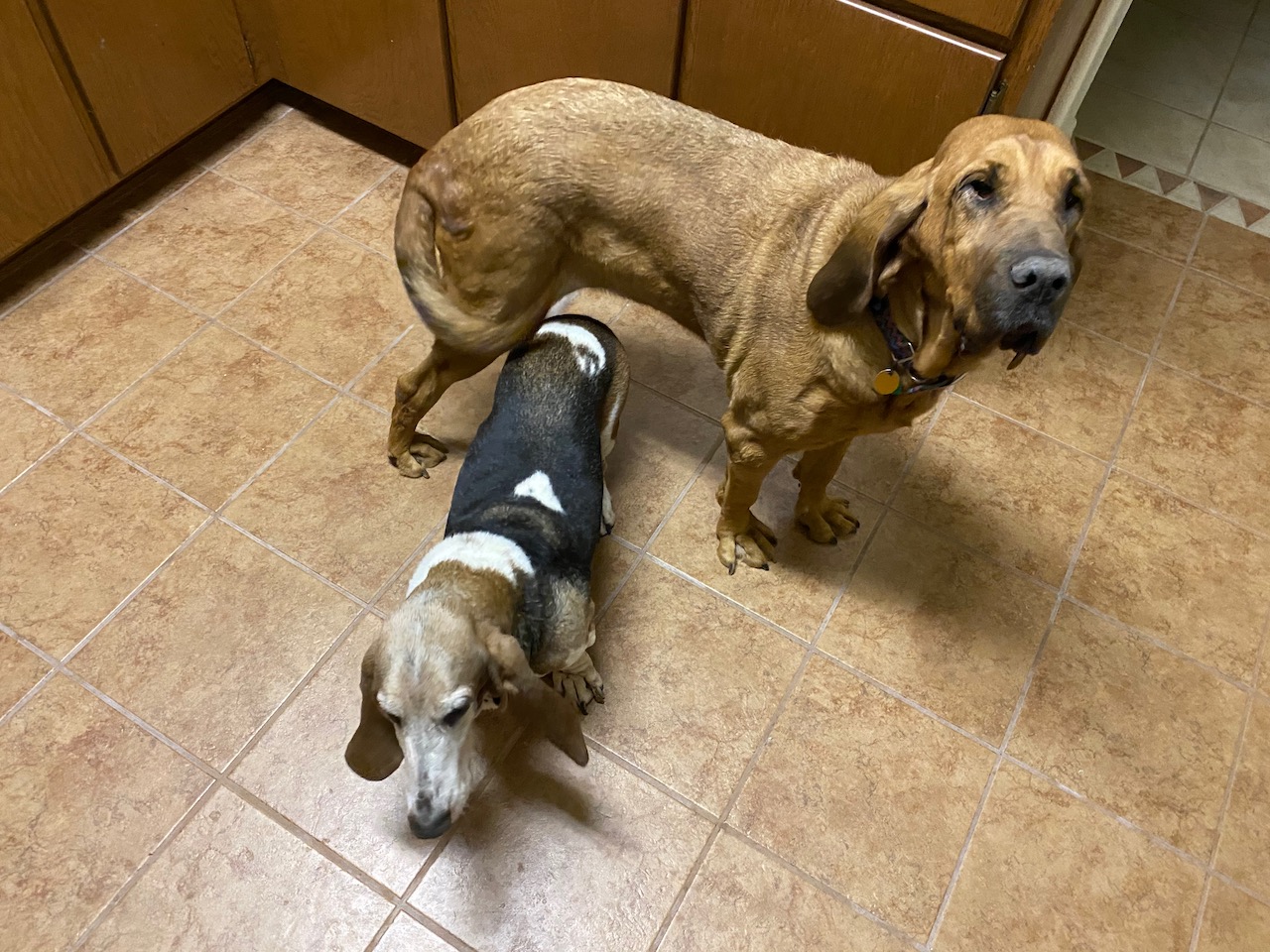 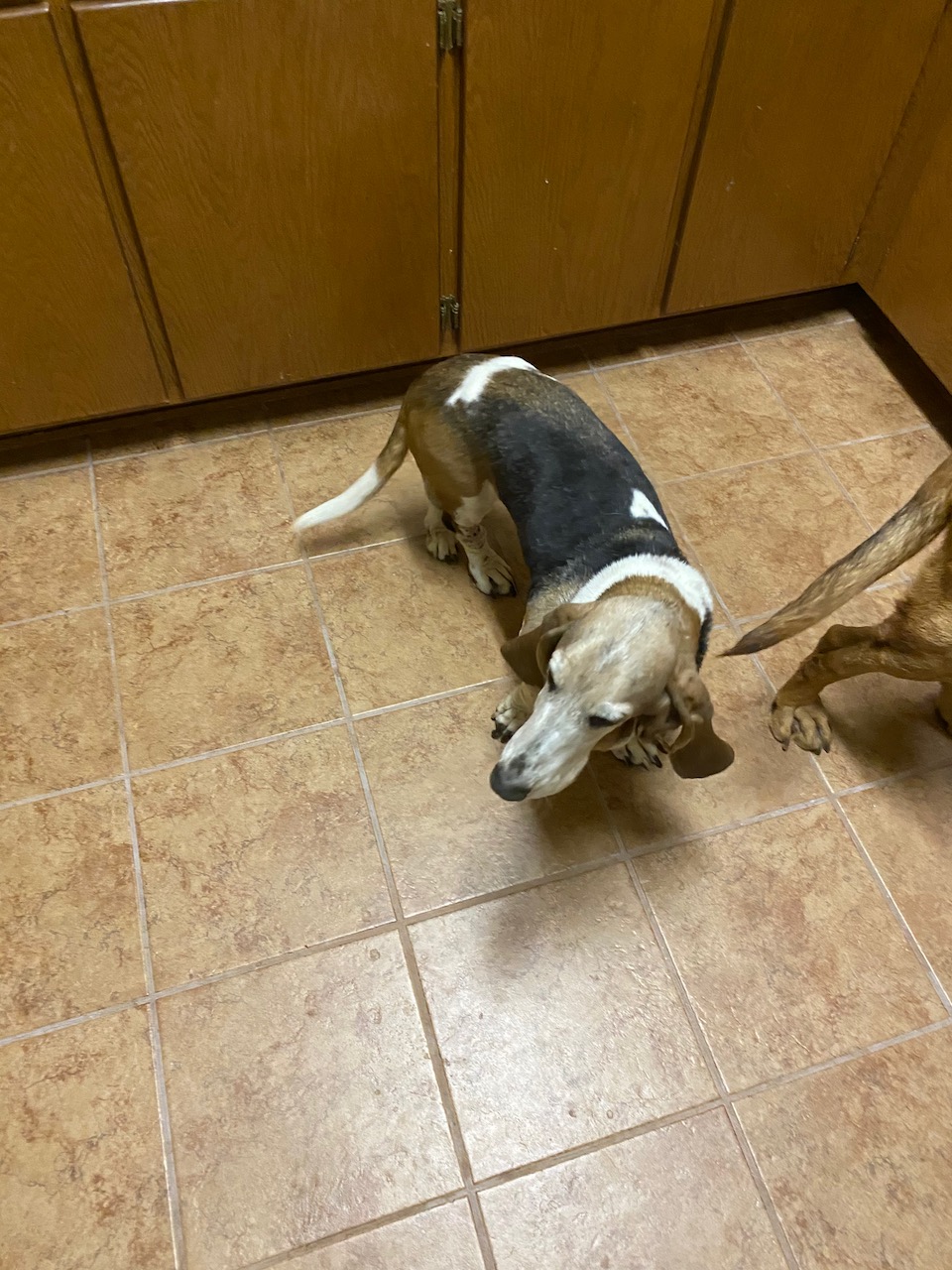 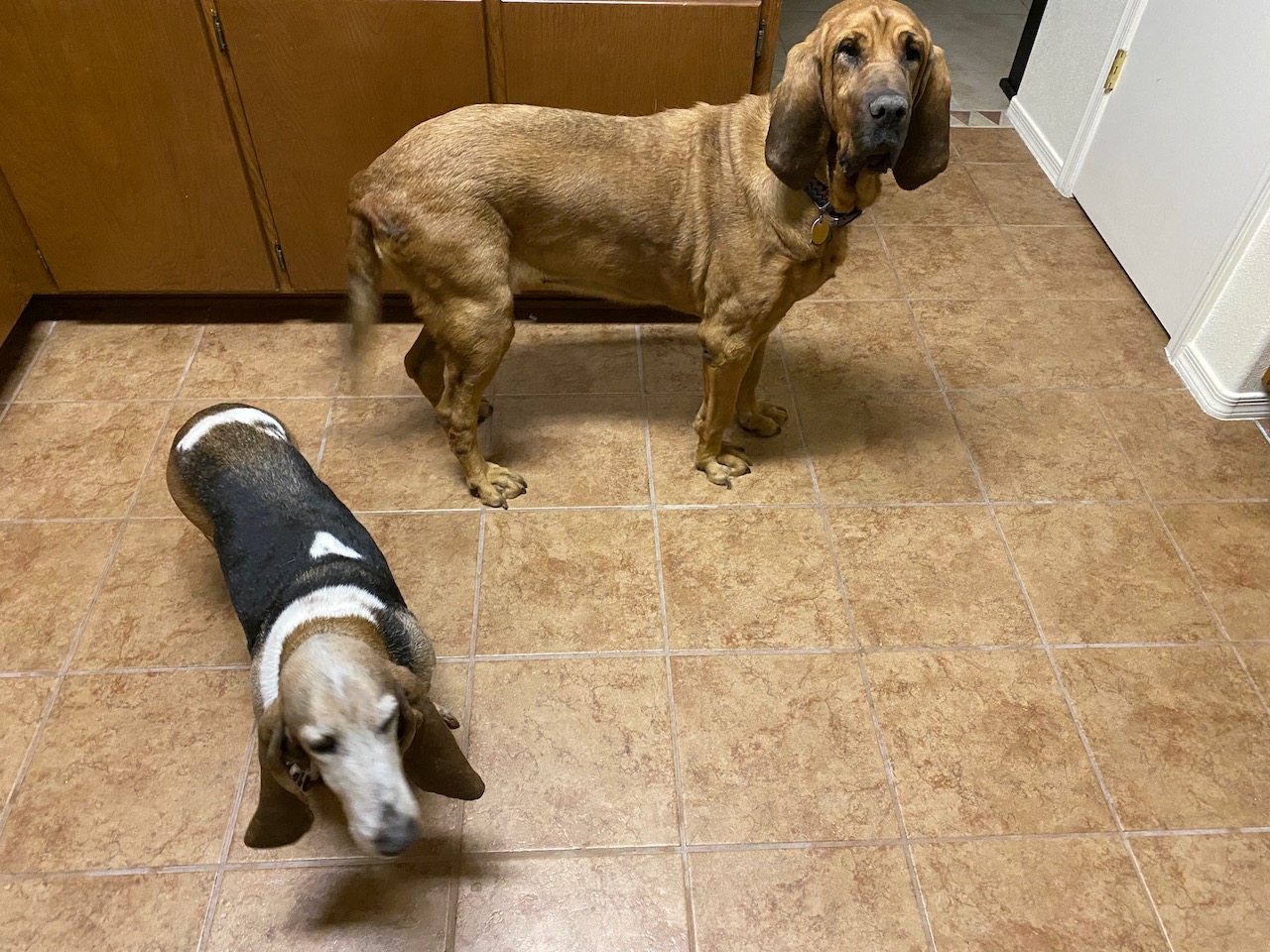 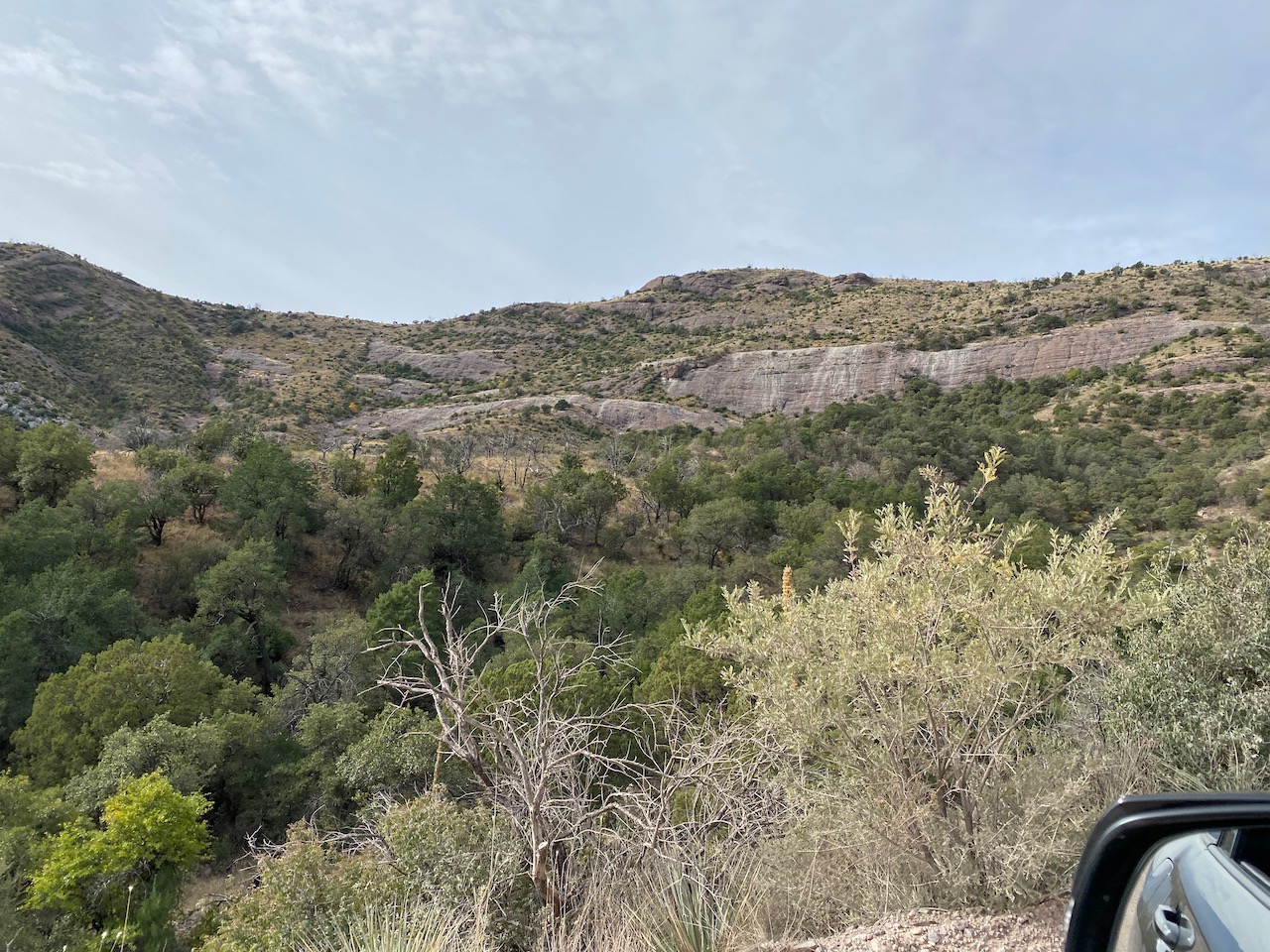 By 9am I was headed for Montezuma Pass again for the third time since moving here. I was just there last week with the truck and now I wanted to see what the new RAV4 TRD Off Road (new model) would do in comparison. 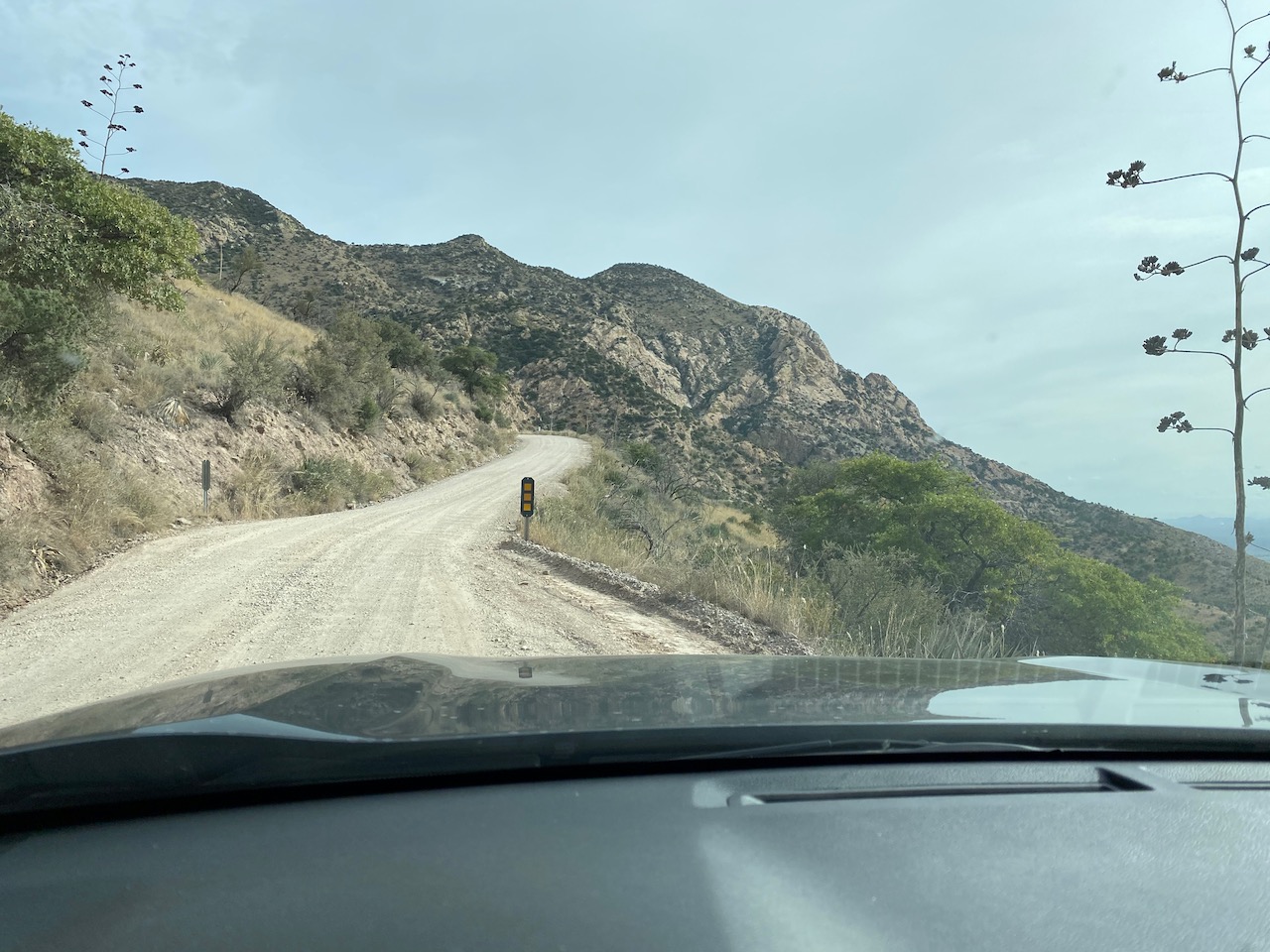 Every picture you see of a road like this, it turns left or right and climbs 7° or more right after the turn. 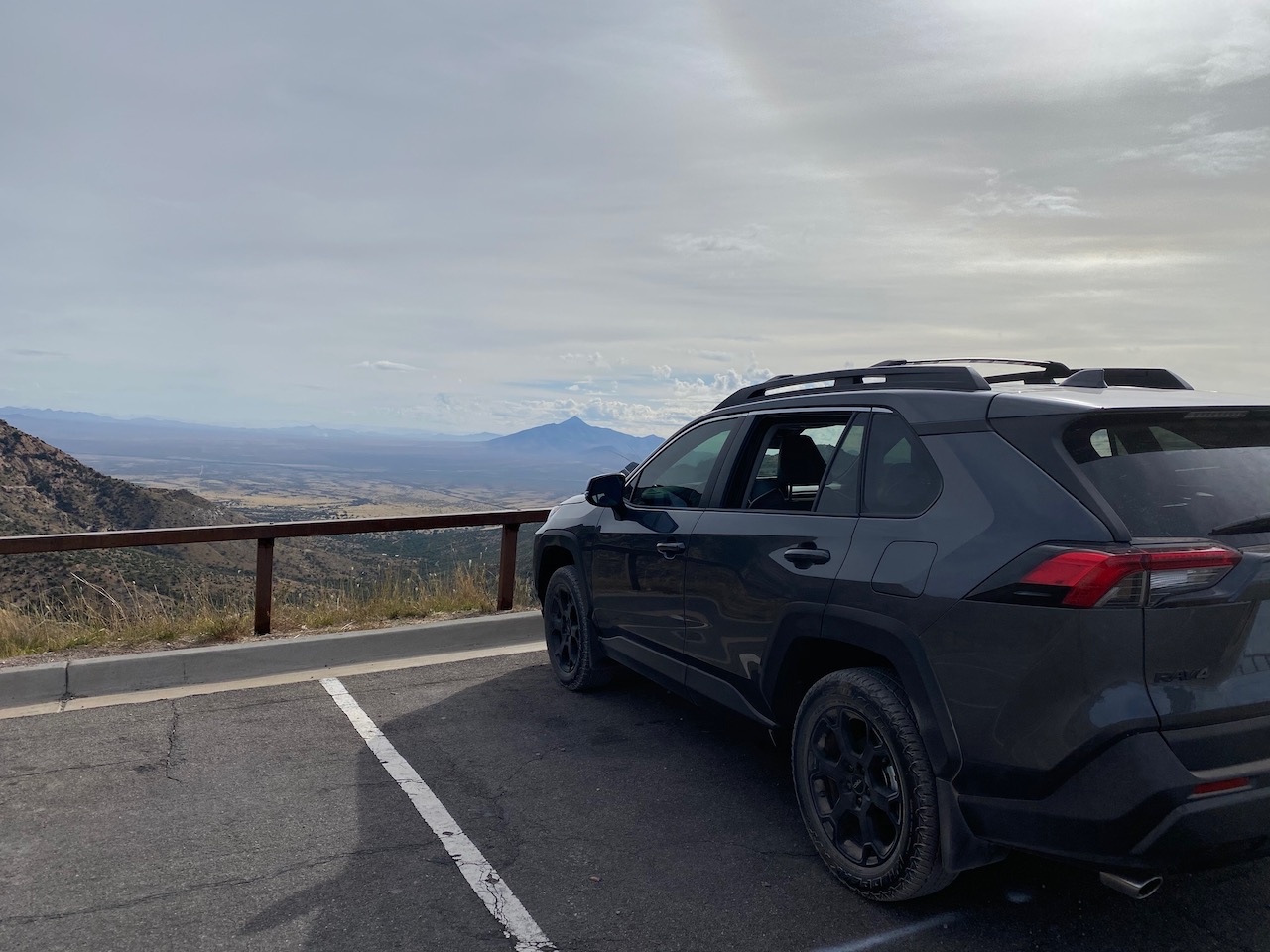 At the top ... the RAV did fantastic and it's only All-Four drive. I never had to go to low S1-S3 to climb. It may have handled this drive to the top better than the 4Runner and Tacoma TRD Pro. 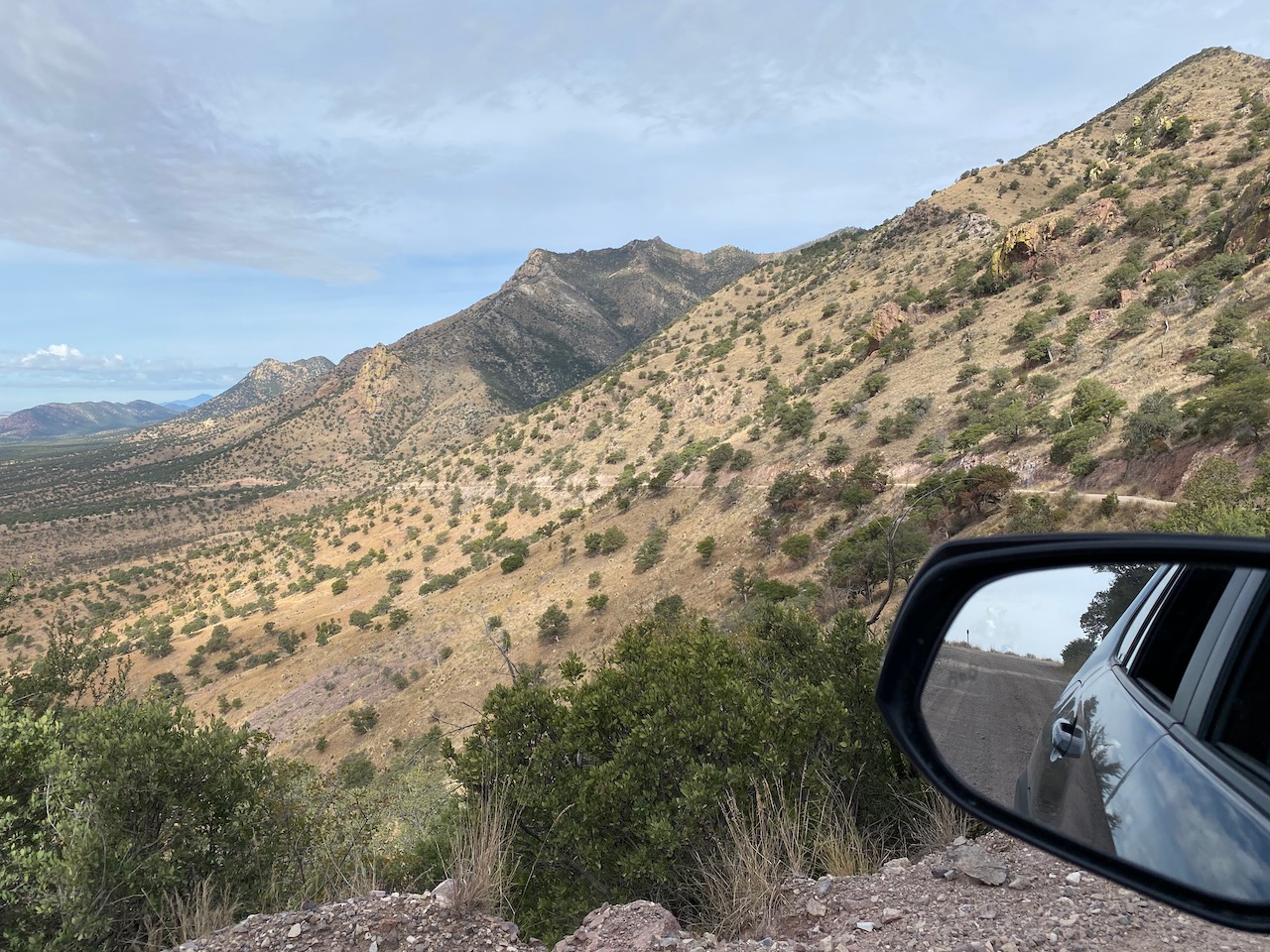 That road doesn't go all the way to the ground level, it will veer back into the mountains for almost 16 miles of climbing and heavy rock surface. 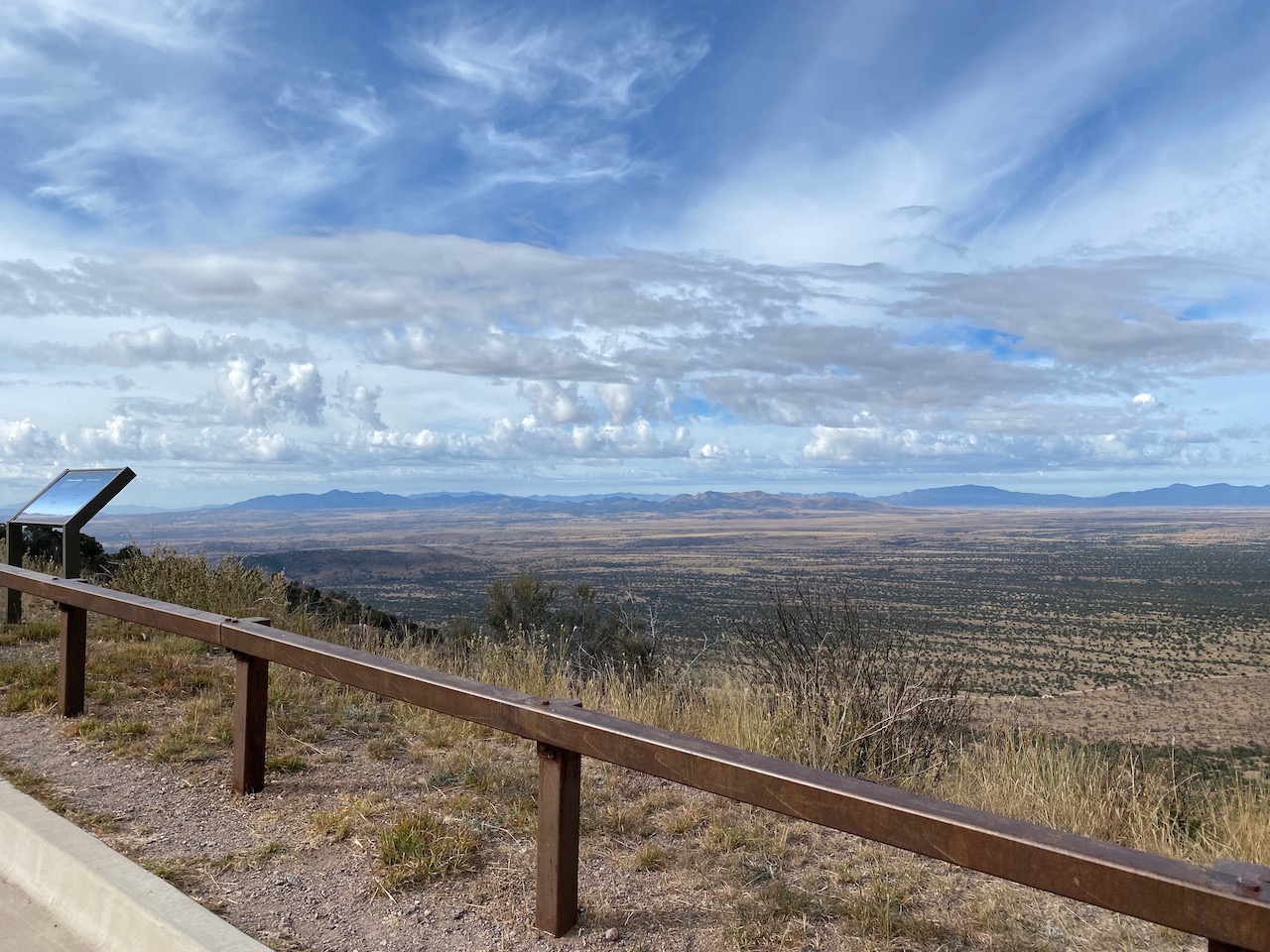 The past few posts I have mixed and matched photos from the iPhone and the new Nikon D3500. I have really liked using the 18-55mm lens the Nikon came with although I bought it for the 70-300mm. The iPhone Pro 11 Max takes the best photos I have ever seen for crisp sharpness and little to no editing.

Besides changing the handlebar tape on two bicycles I changed the blog "About" page and updated my "Bicycles" page this morning early. I cut the size of the About page drastically and still covered 8 years of blogging.

Just like the doctor told me on October 22nd, "every day from here on out your hip is going to feel better. There will be some bad days but not from anything you do or have done, it's just a normal process of healing." The hip joint takes 2 to 3 months to heal and I will pass the 2 month mark on the 8th of November. Some of the exercises hurt just a little but I know they are helping a lot.