The Sun Is Back 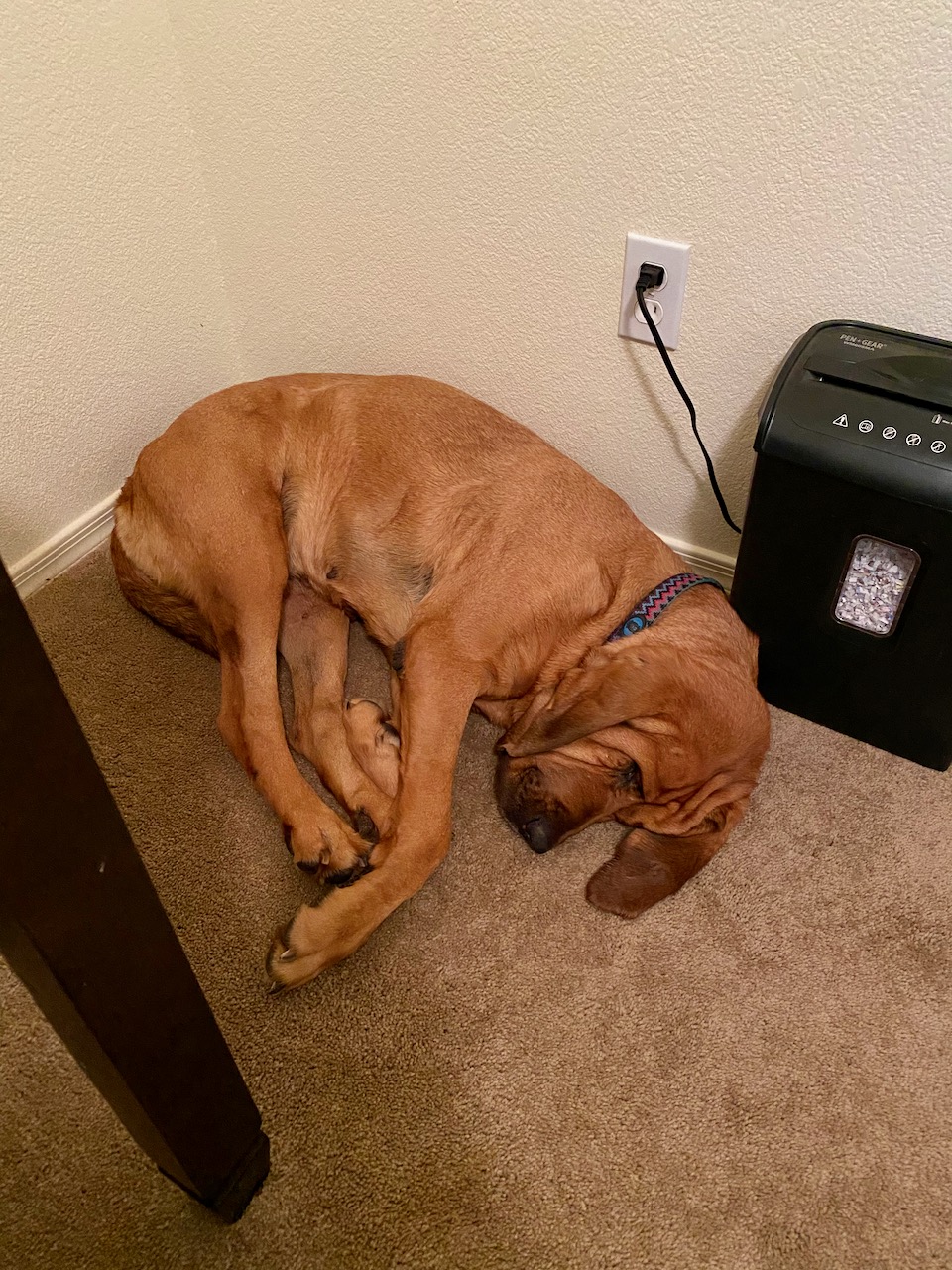 The weather channel on Tucson news last night said we had received 1.3" of rain and wind gusts as high as 53mph on Thursday and Friday. My friend in Phoenix sent me a live video of I-40 and I-17 closed due to blizzard conditions, her snowboarding plans in Flagstaff were cancelled. The news showed photos and interviews with owners that had large 5th wheels tipped over, trees blown down on top of houses ... so maybe what I witnessed the past few days wasn't the norm. It all came from that "bomb cyclone" off the coast of California. As you can see, none of that bothered Stella. 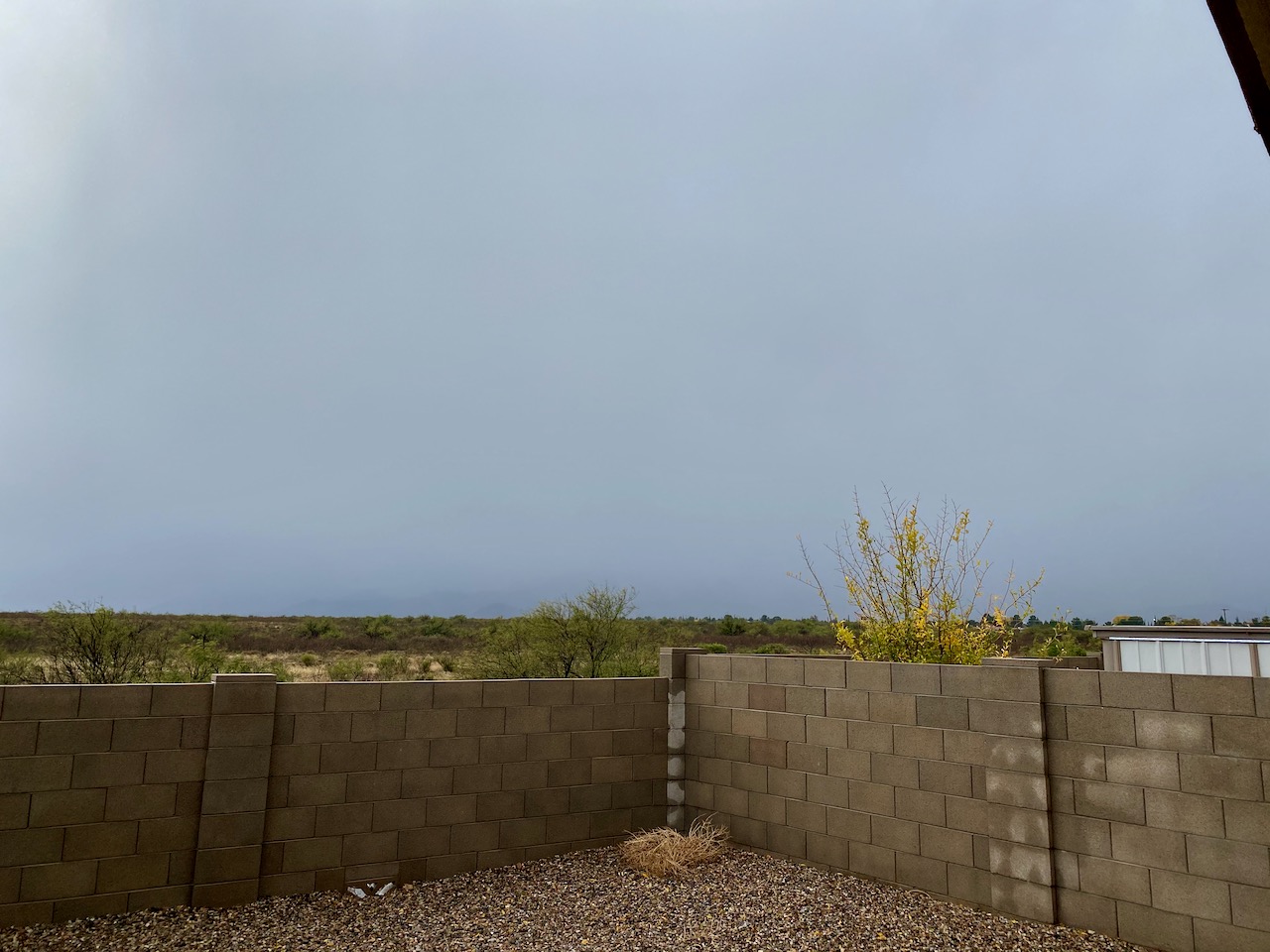 Whereas back in 'the tropics' of Southern Indiana, I could always tell when then winds were high up on hill because the old house had storm windows that would rattle. I could hear the tree limbs blowing and only hoped they stayed on the trees and not on my house. Here about all I could hear was air getting into the vents leading to the roof and making noise. Thursday night while out I had my first encounter with tumbleweed blowing in front of my car ... it was almost as big as the front end of the RAV4 as I dodged it. This is a small sample that blew over the  fence and in the yard. 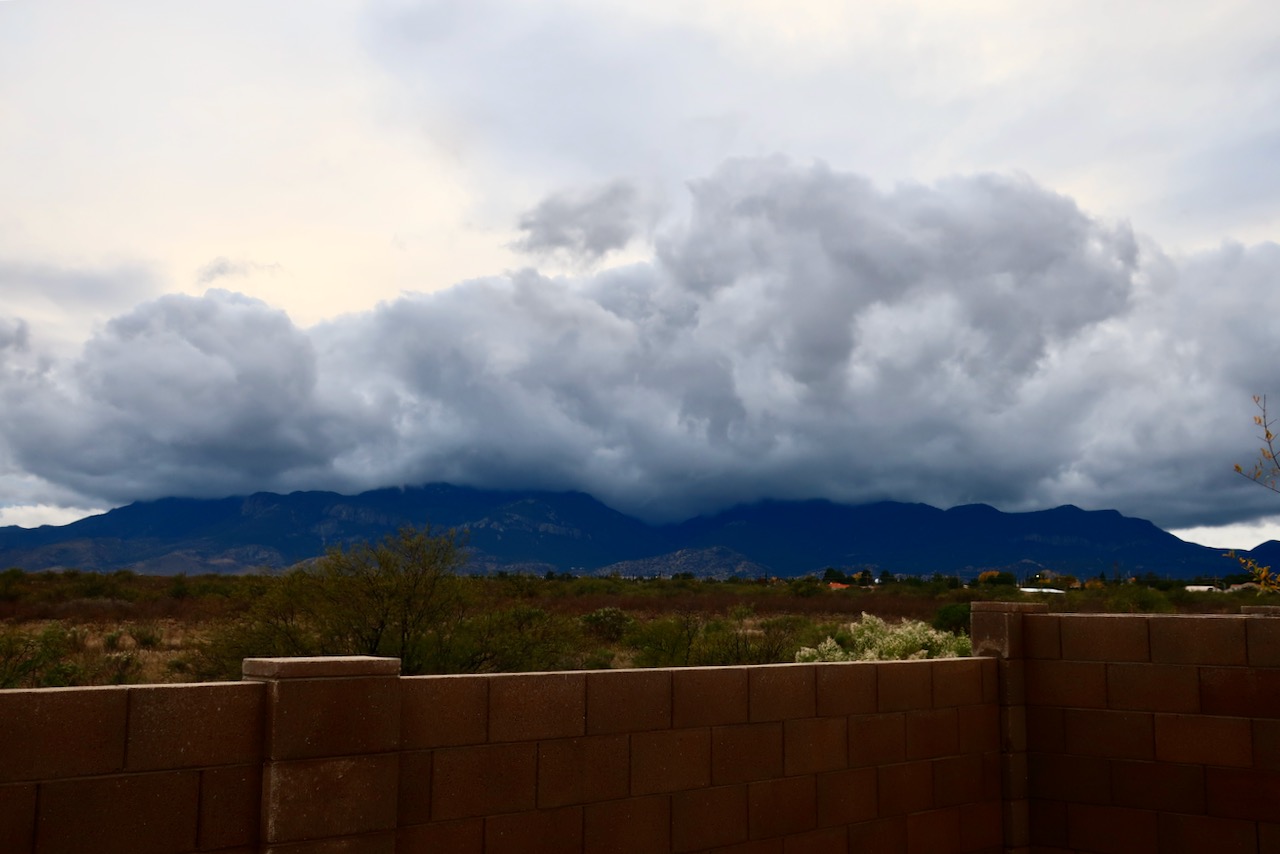 I didn't have any plans of riding my bike outside on Friday. I had at least one football game I wanted to watch and after that I spent time on Grand Tursimo 6. Moving from GT5 I have to start over. Although I am at the Professional Level of driving on GT5 I have to start all over from the Novice Level with slower small cars, drivers test to obtain license and experience enough to be able to enter races. I am moving through the different levels fairly quick. The graphics with each new update is amazing.

By late afternoon the wind was slowing down. The skies were breaking up all the cloud cover. The mountains that were invisible the past few days were back on the horizon with a little more dusting of snow on top. Still all mountain roads were closed. The visitor centers were closed. Hwy 92 south of me was flooded as well as Hwy 90 heading east to Tombstone or Bisbee. I have a feeling again, that this storm was not the normal winter storm or weather. 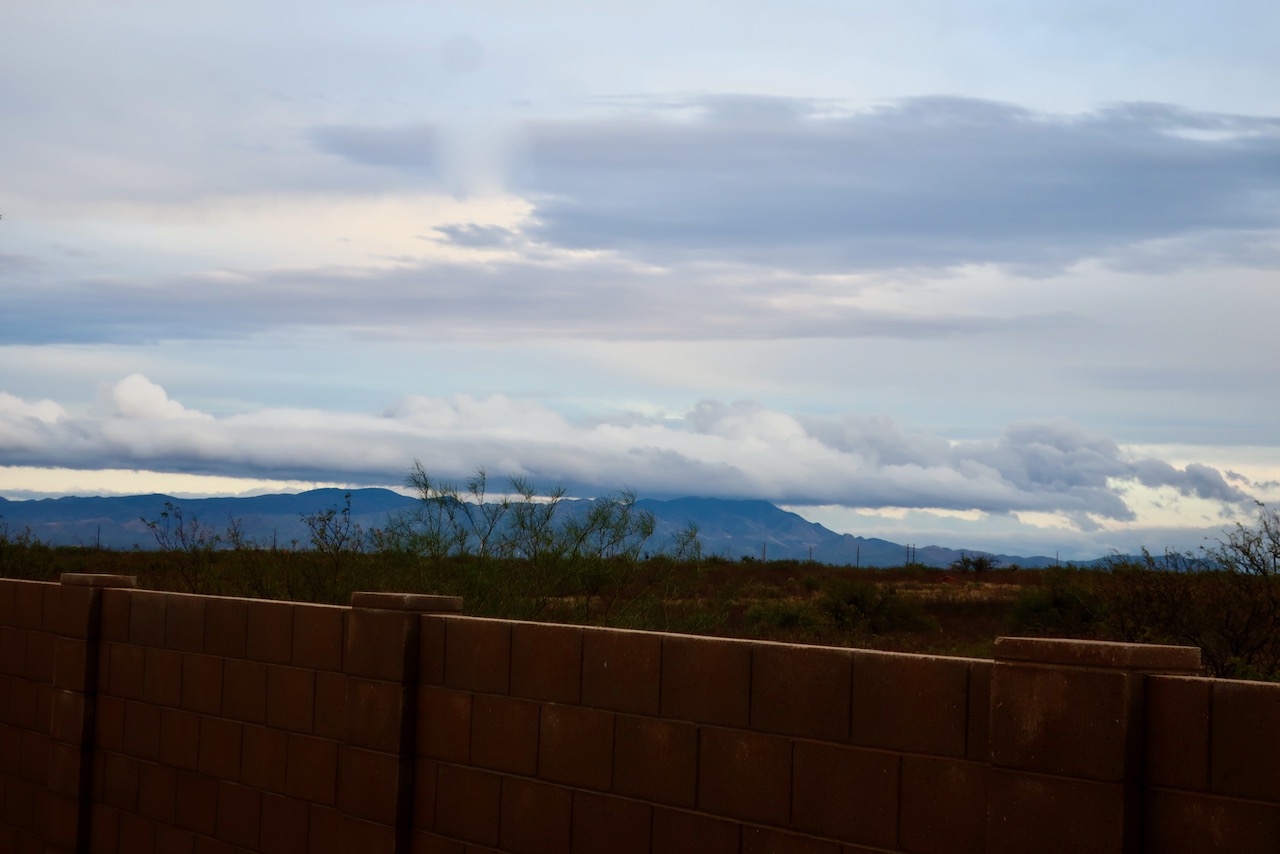 I moved the trash can from the garage black outside since it was safe and would not be blowing down the street, although it is a large container furnished by the city. The patio chair and blanket were returned to the spot on the patio. Although windy, no danger of blowing around the yard banging against the concrete block fence like I witnessed on Thursday. The hounds slowly migrated around the yard, checking on the new scent. 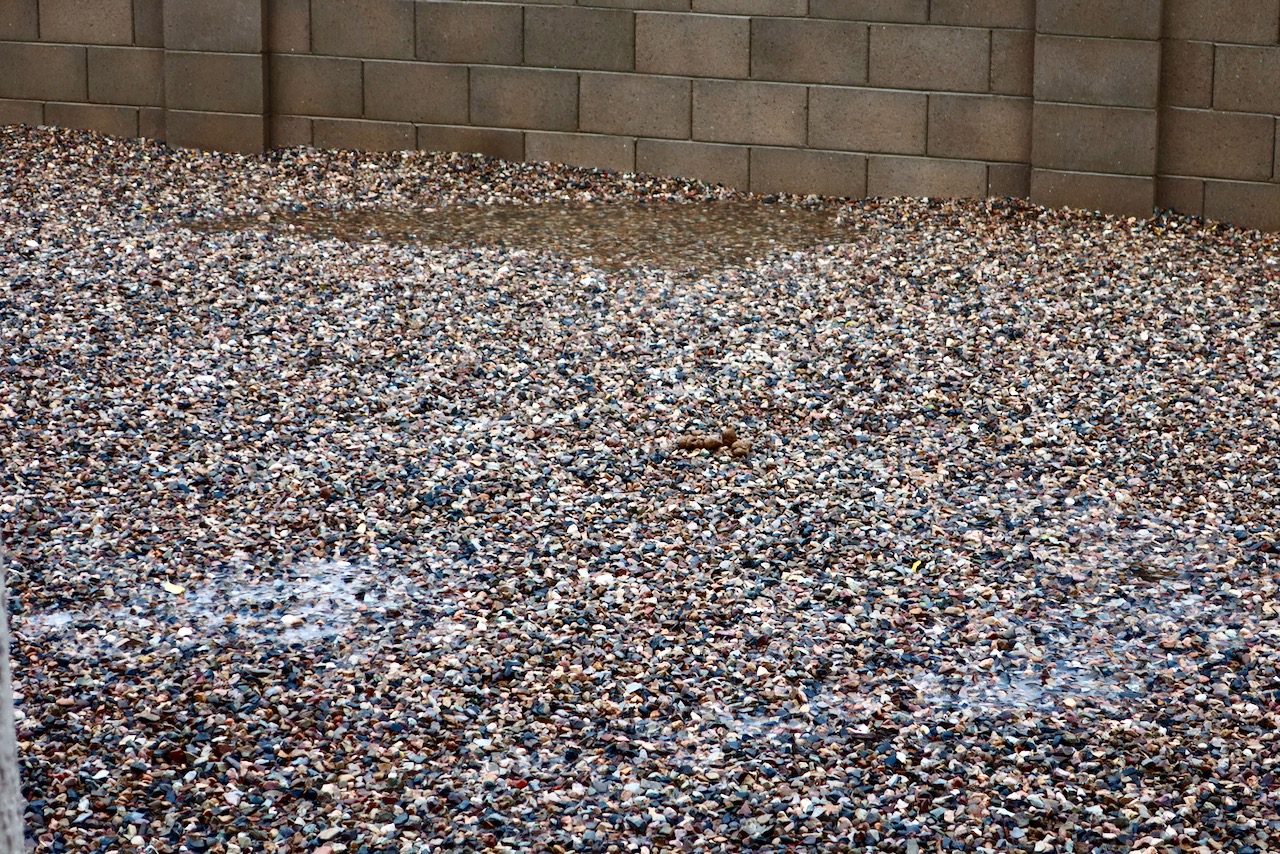 What they found were a few spots of standing water and Stella couldn't figure out why that small bundle of tumbleweed was in one of her favorite spots to sleep. I felt like I wanted to ride for a short time but good weather has spoiled me in my short time here and I found it really hard to change into bike clothes that would keep me warm and dry ... I'll try it today when it's back in the 50's mid afternoon. 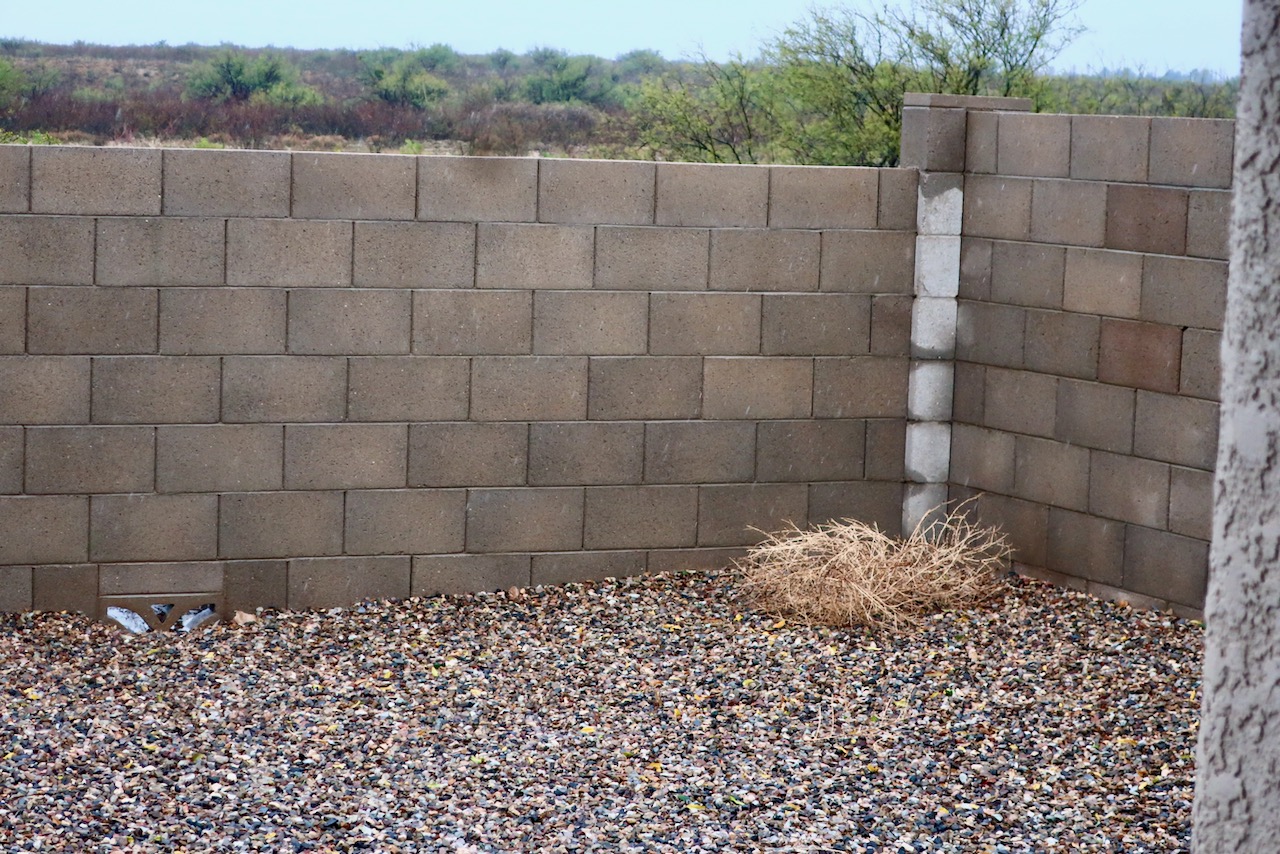 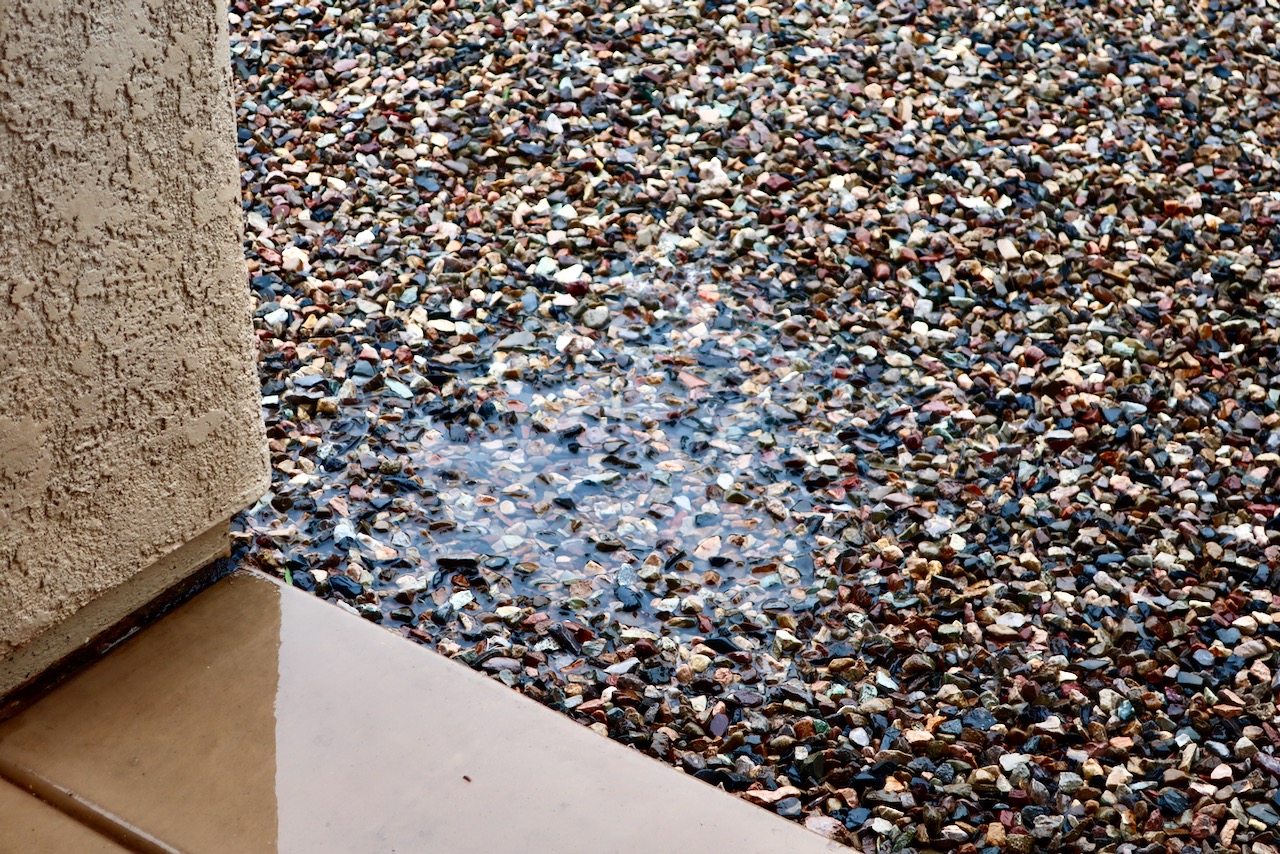 I forgot to mention when I bought the new iPad Pro the other day, it came with one year of Apple TV for free. I don't need the box or remote as I can see all the games and movies I want to watch on any Apple device. I might have to expand my electronic knowledge and check that out. My iMac has a really good quality picture when it comes to watching college football games live when I can't get the IU games on tv.

This weekend is big for College Football. Throw out all of the won and loss records for the teams because when they are playing their rivals, many of them in-state rivals, games get exciting and come with a few surprises. My first game starts at 10am today but Stella and I will be taking our first walk since last Tuesday. Currently she is asleep in the corner of the computer room so she might not be excited about that walk until she sees me putting on a jacket and grabbing her leash ... THEN she gets excited. 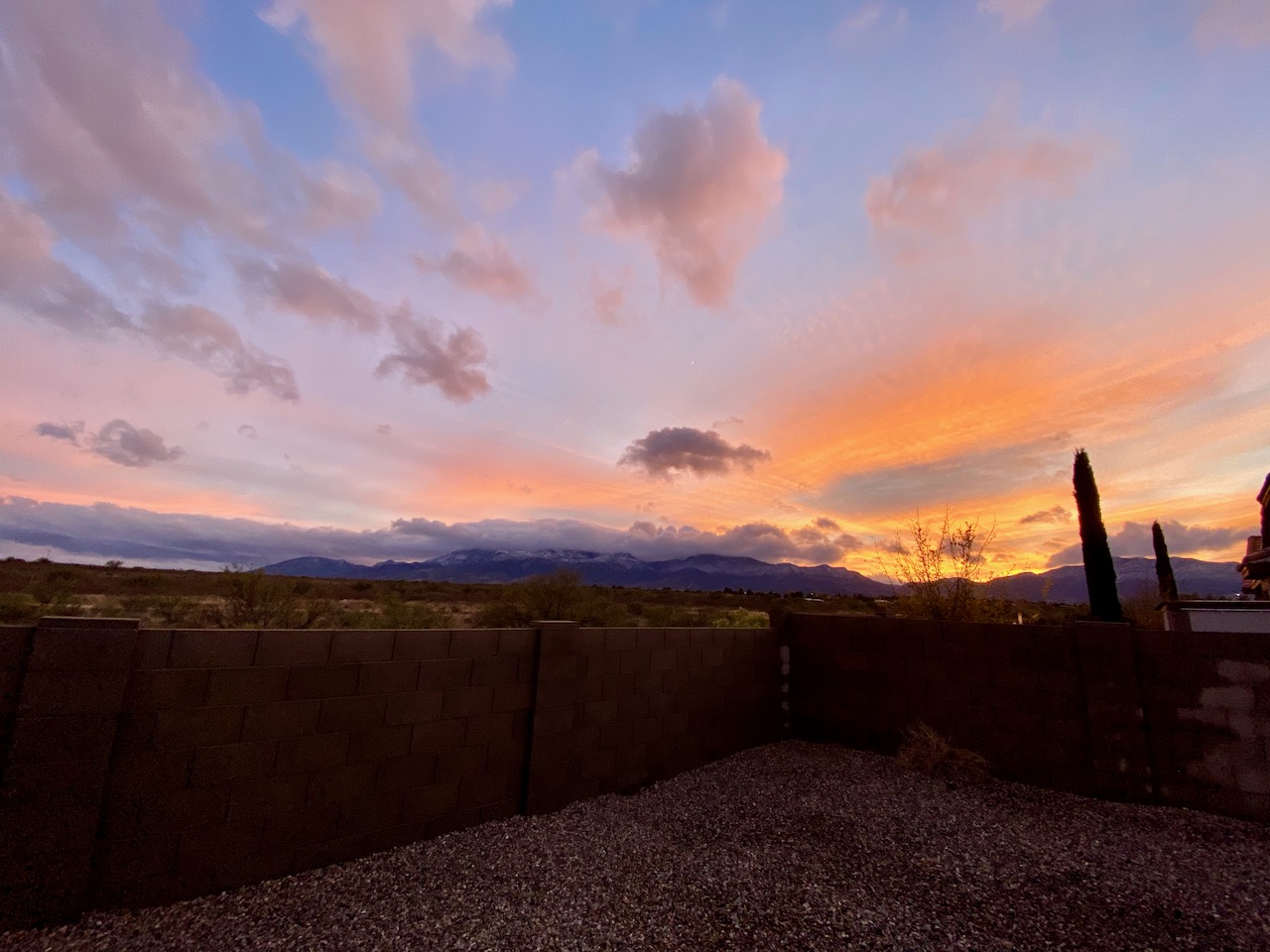 By sundown last night I was feeling pretty confident of the weather forecast. It was going to be back to at least 10 straight days of dry weather, some partly cloudy and temps eventually reaching into the 60's as daily highs. I plan to have a big week of bicycling with a goal to get in over 100 miles of riding from Monday - Sunday. The hip feels cold damp weather. I wonder if that is going to be an ongoing thing for the rest of my life? Otherwise it is getting stronger by the day and I catch myself doing more movements in a normal way. 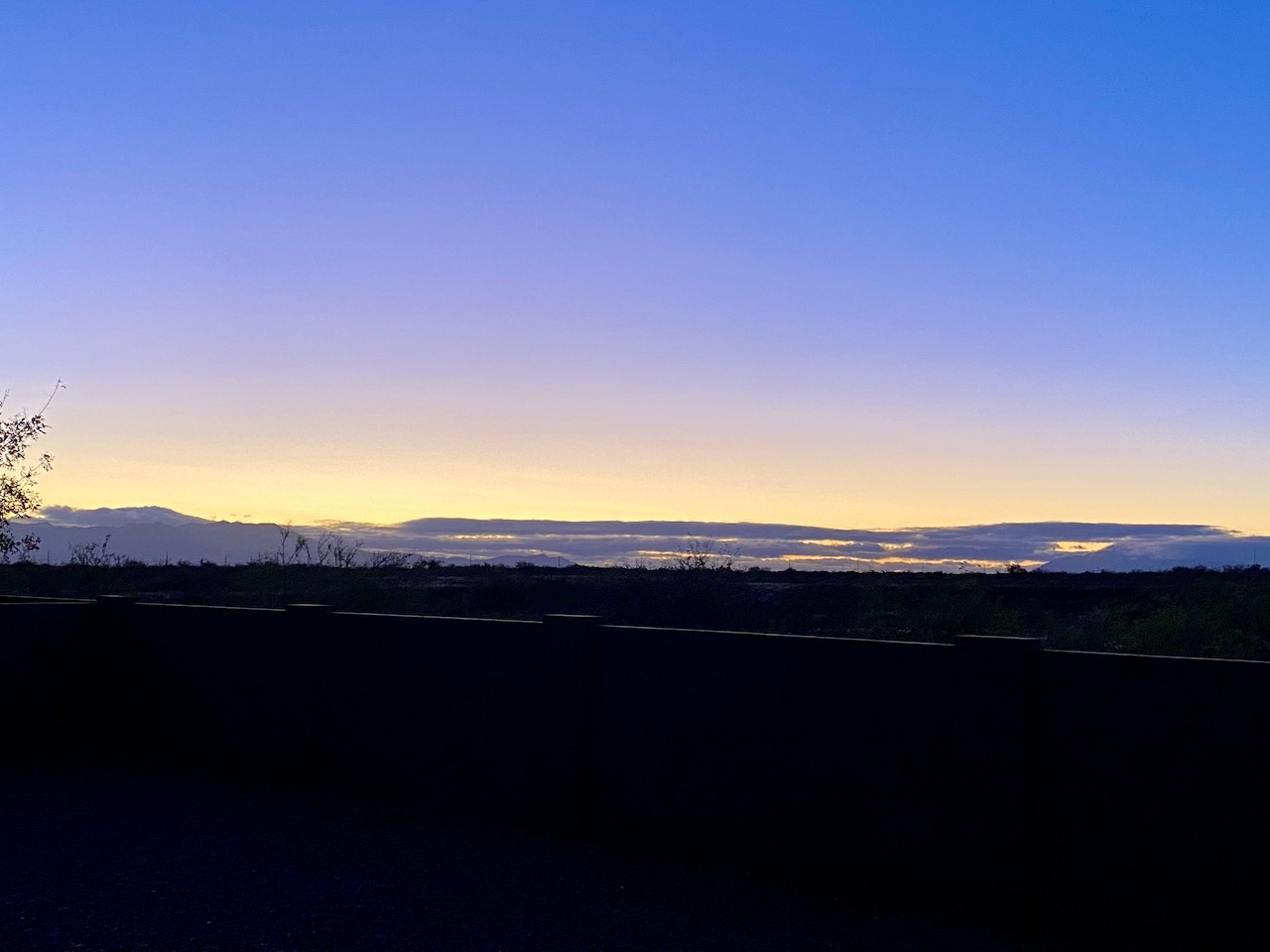 The overnight temps were dropping to the low 30's. I wasn't taking any chances and left the heater on automatic with the thermostat set in the low 60s. Even with cold temps this house made of tile floors and stucco covered walls does not get as cold as my older house did back in 'the tropics'. I never heard the heater turn on during the night. The hounds are back to sleeping through the night so I am now the only one getting up during the dark hours. Stella will let me sleep until 6:22am, about sunrise, not because she needs or wants to go outside but because she wants to eat !!!!  I have never had a hound in 32 years that loves food as much as she does.

A new day is breaking down by Bisbee and across the Mexican border on the right side of the picture. It does the mind good to see sunshine skies instead of howling winds and rain. 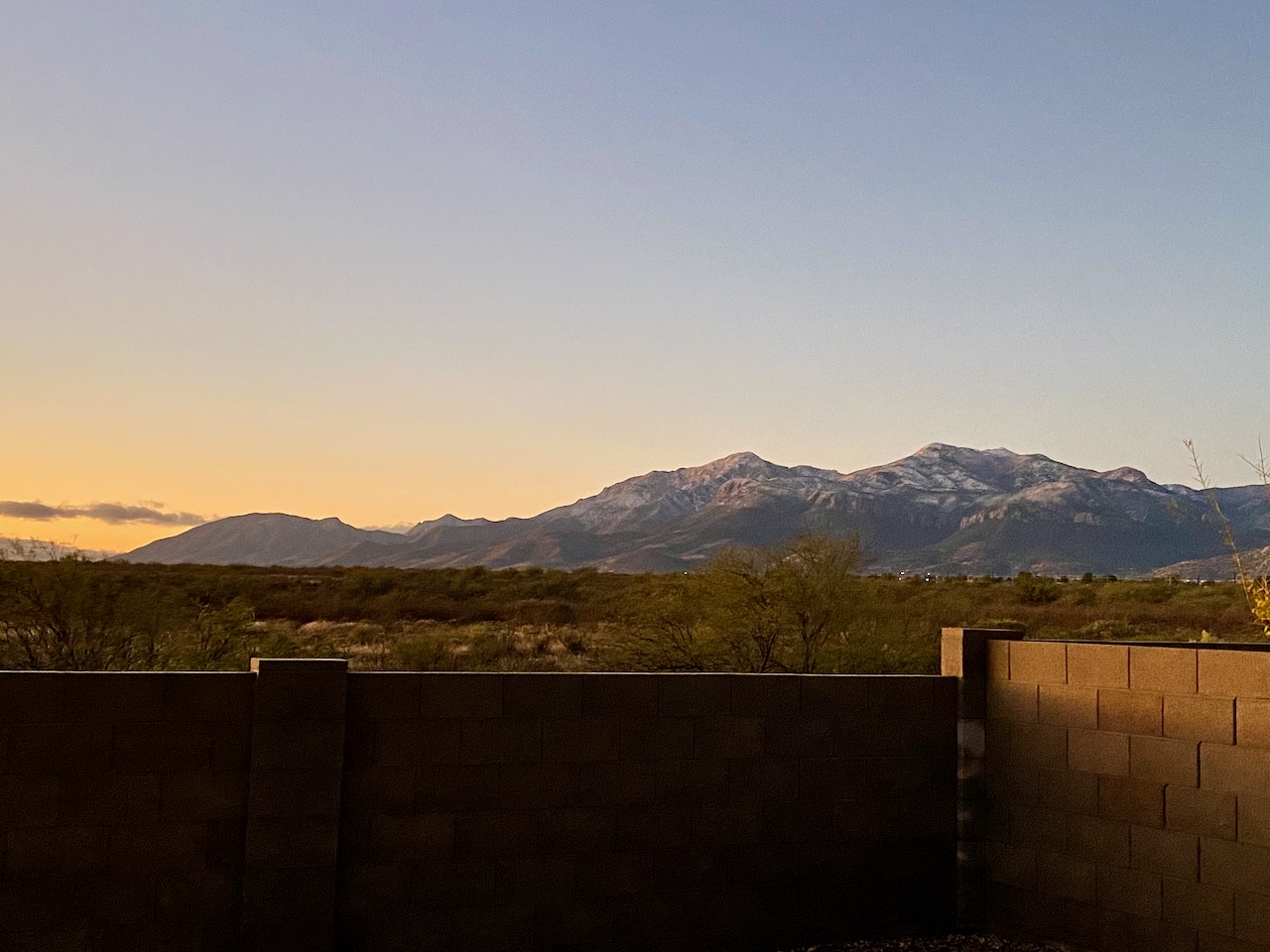 I took all of the photos on Thursday with my Canon 9X but compared to the new iPhone 11 Pro Max ... there isn't one. The iPhone camera blows the Canon picture quality away. You can see the differences between the two pictures below. 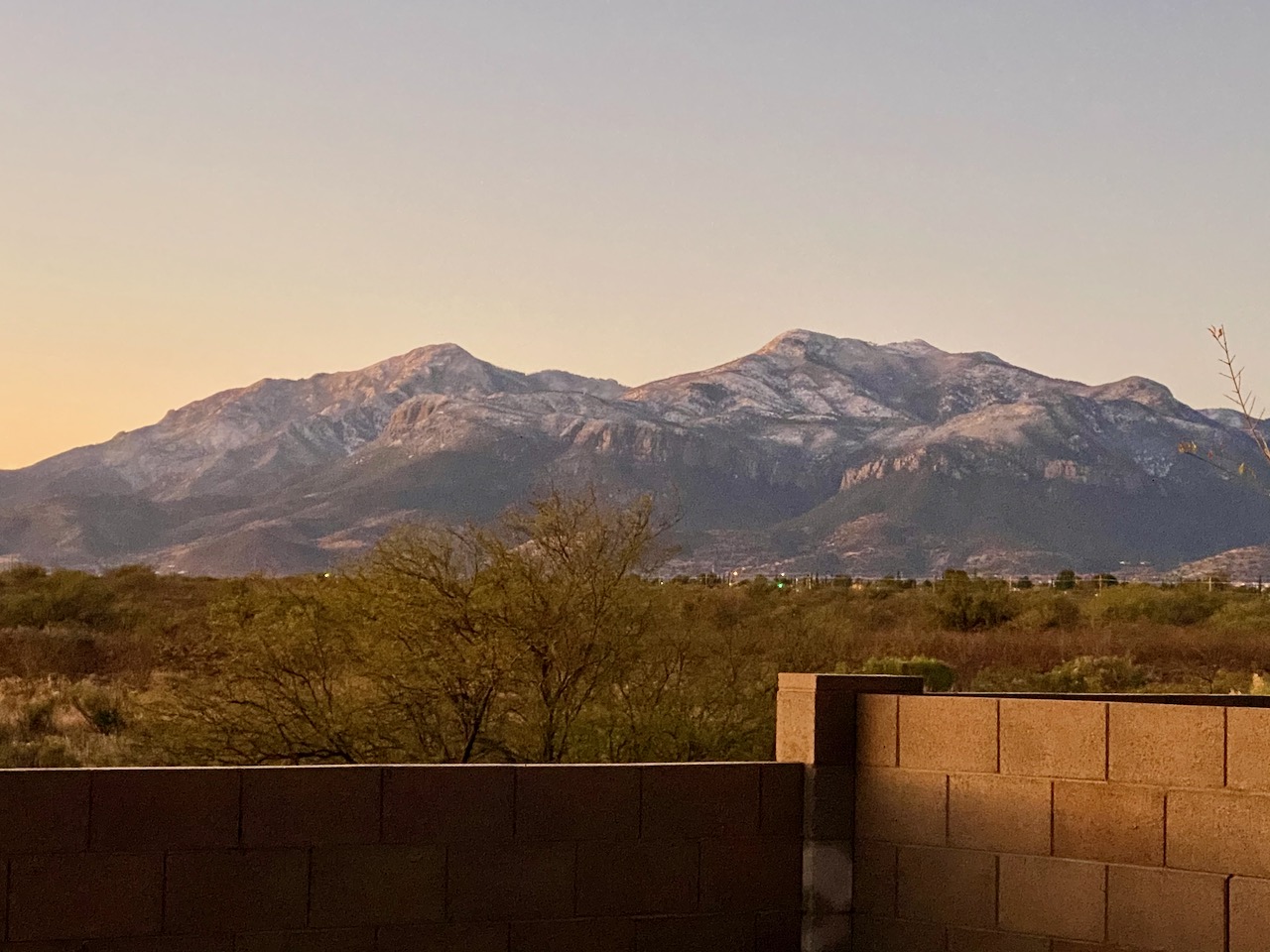 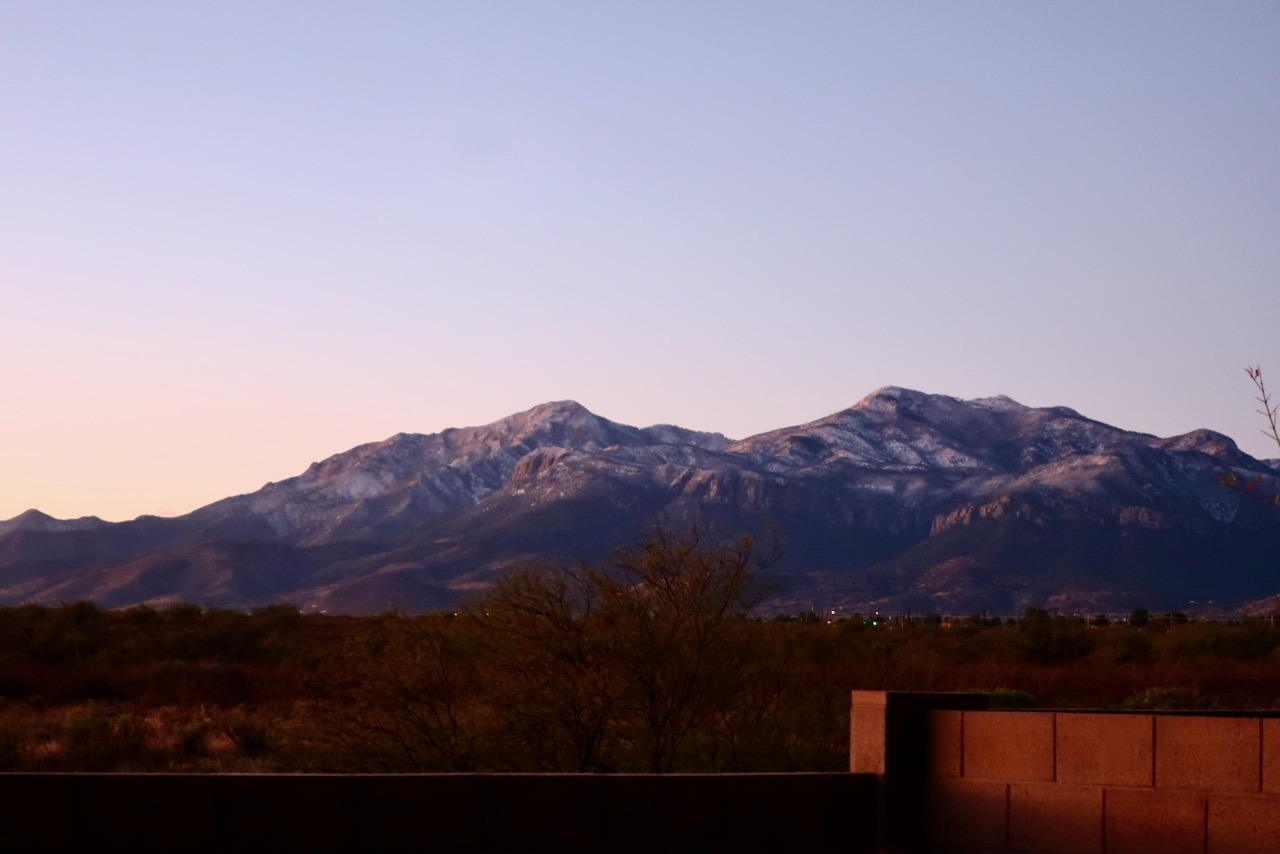 Well I have to get going here. After three days of being cooped up in the house I am wanting to get outside for a walk this morning almost as bad as wanting to get on a bike and just cruise around the neighborhood or town. Lots of football today so I'll see if I fit in some bike riding for an hour or so in the afternoon. There's always tomorrow if I don't ride today.

An interesting tidbit for those that blog or are computer experts ... let me know what you think. A few weeks ago I moved my old domain name from my Wordpress blog that I was no longer using, back to this blog where it originated. I tested and made sure the free Blogger domain name would still lead to the blog when clicked or typed by readers. Those urls are linked. Yet after changing the blog to the domain name dot com, my blog traffic has decreased over 50%. Some of the readers I don't see nor hear from since the change a few weeks ago. Any ideas? Maybe I'll park the domain name at GoDaddy and return to the free Blogger domain name for this blog.